The Philippines is another country with a crazy kitchen. For quite a long time I’ve been curiously observing Philippine restaurants in various corners of the world with their menus,full of incomprehensibly exotic names. Finally I had a chance to explore them at the source.

This report follows a series of food reports that also includes Peruvian, Japanese, Chilean, Indonesian and even Hawaiian cuisines.

My stay in Manila was only 5 days long. This is entirely insufficient in order to try out all the wonders of Philippine cuisine. Even if you check out several new articles per day as I did. Whole series of enticing names remained undiscovered, such as crispy pata, grilled isaw, sinigang, kesong puto etc etc etc.

Let’s start from bibingka – a rice cake covered with cheese. The Filipinos eat constantly, 5-6 times a day, and in between they must take some snacks. Bibingka is exactly a kind of a light snack that allows them to bridge the interminable gap between for example fourth and fifth food intake of the day. I ordered bibingka as a starter. It has a rather subdued, nuanced taste, clearly exhibiting coconut milk and cheese. 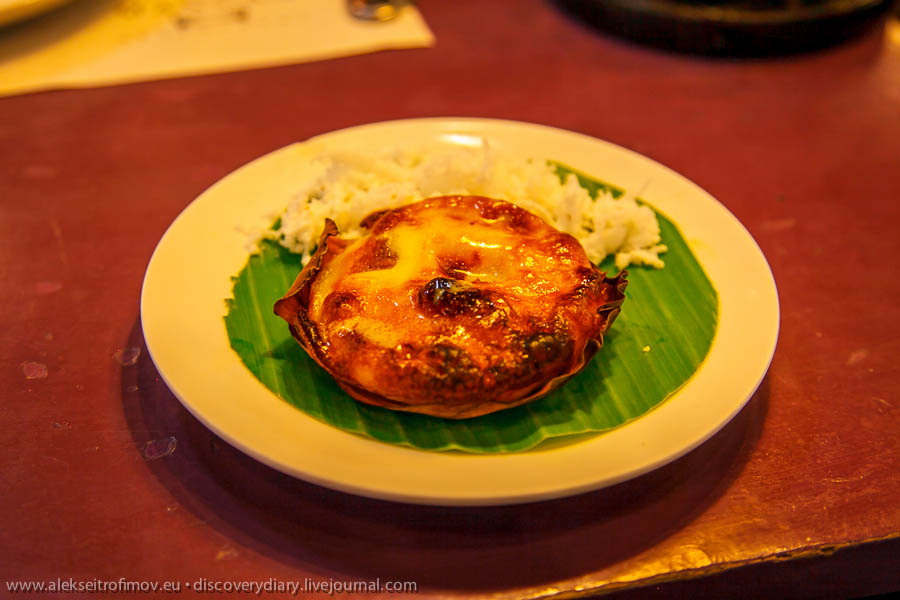 The first main course is kare kare. The main ingredient of kare kare is oxtail. The fat part of a cow, it fits perfectly with some of the main tenets of Philippine cuisine. Firstly, it is as fat and unhealthy as it gets. Secondly, it is a kind of a spare part, and the Philippine cuisine seems intent to use all parts of an animal, even those you could hardly imagine eating! Well, there is a third rule too: let’s make it really tasty! In the case of kare kare the oxtail is seasoned in peanut butter-based sauce, also in the broth you can find other meaty parts, such as pig feet, pork hocks, simple beef as well as vegetables. Separately you are served rice and very spicy seasoning. Tasty as it was, I could only eat about half of this very heavy treat! 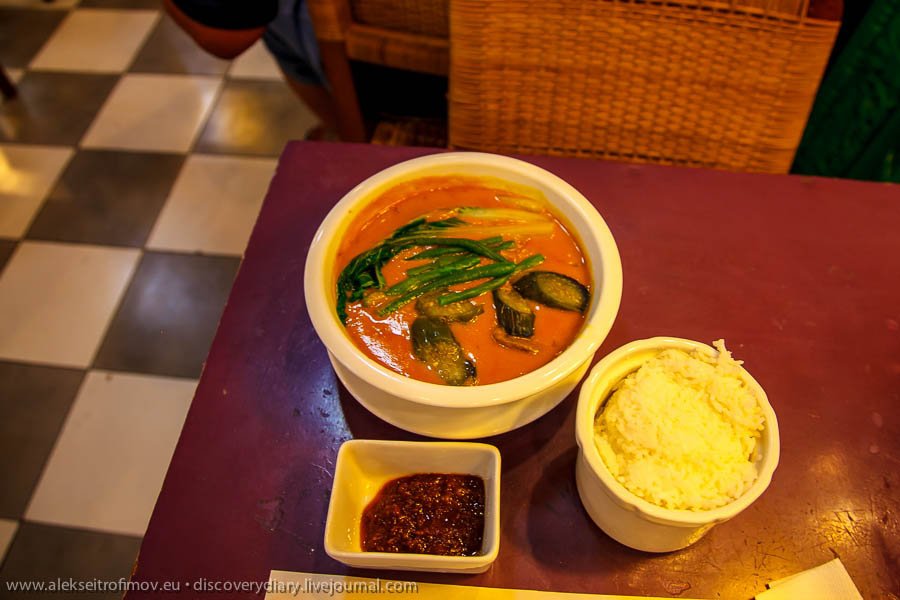 In part because I had to keep some space for desert. Halo halo is the most typical Filipino desert. It is a mix of condensed milk and shaved ice, which is improved with various solid ingredients. It can be pretty much anything: fruit, jello, beans etc. Every restaurant has its own recipe – and indeed the meaning of “halo halo” is “mix mix”. If you’re on a mission to add weight, can’t think of a better solution! 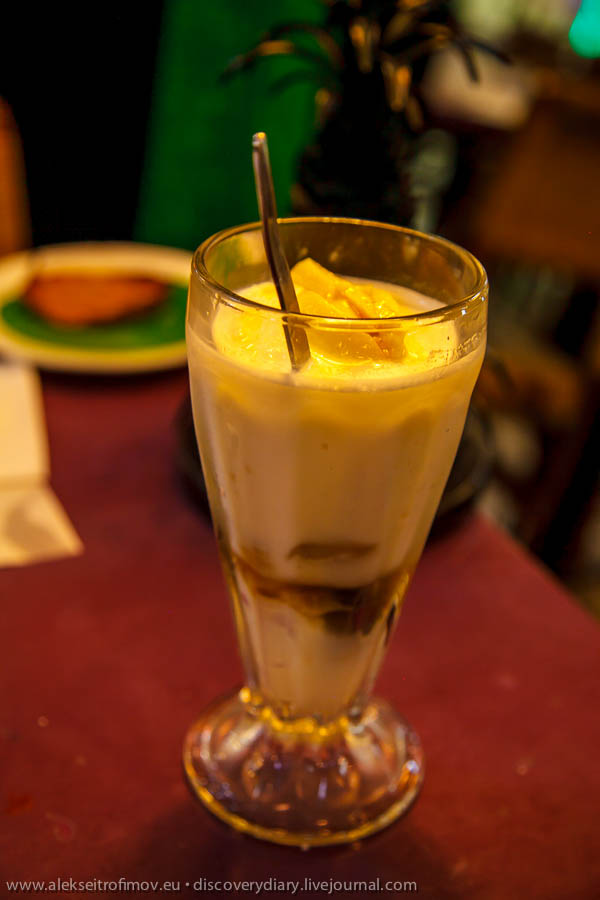 This rather light (for the Philippines) dish is called pancit palabok. It is made from a particular rice noodles by the name of bihon. Slices of boiled egg and shrimp are added on top with a spicy sauce. Yummy it is. 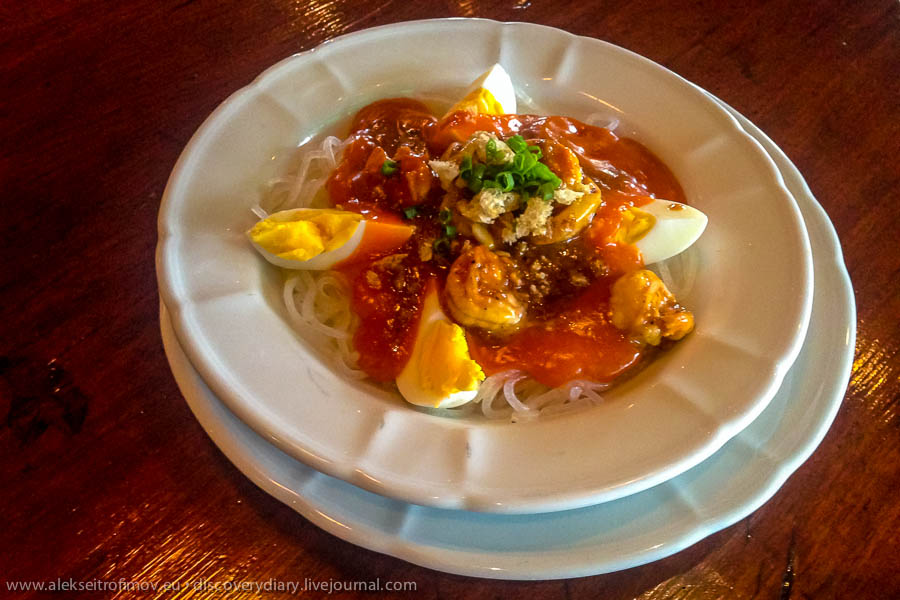 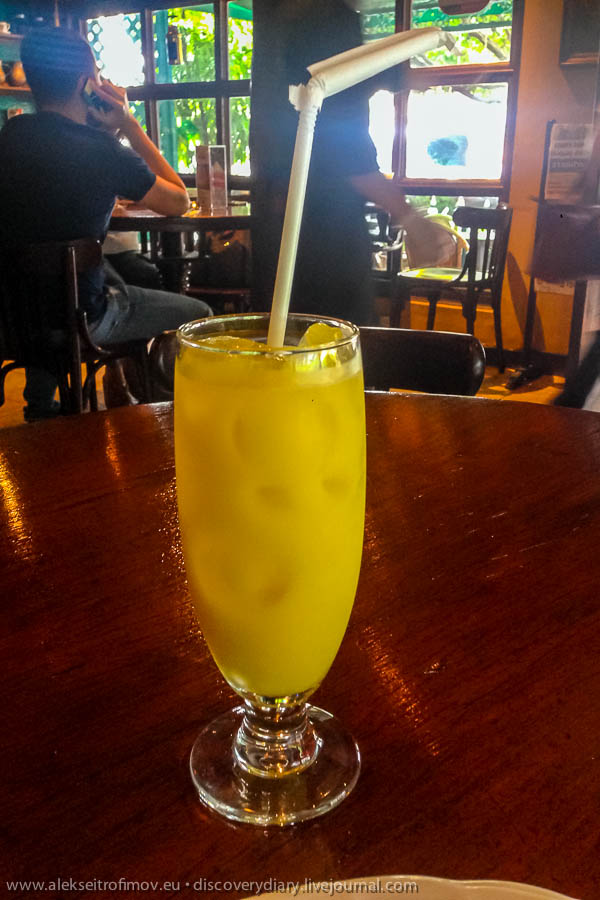 It is an obligation in Manila to check out street food. The difficulty is that you don’t always quite know what exactly is being sold to you. The solution is to simply point and shoot. This! Everybody starts laughing – we’re talking about Filipinos, the merriest people on Earth – and giving you advice on how to consume this thing. In their language of course, and surely one contradicting the other entirely. This cake was quickly subsumed in boiling oil before being consumed. A spicy seasoning was also offered. Basically I survived the hunger death between third and fourth breakfast! 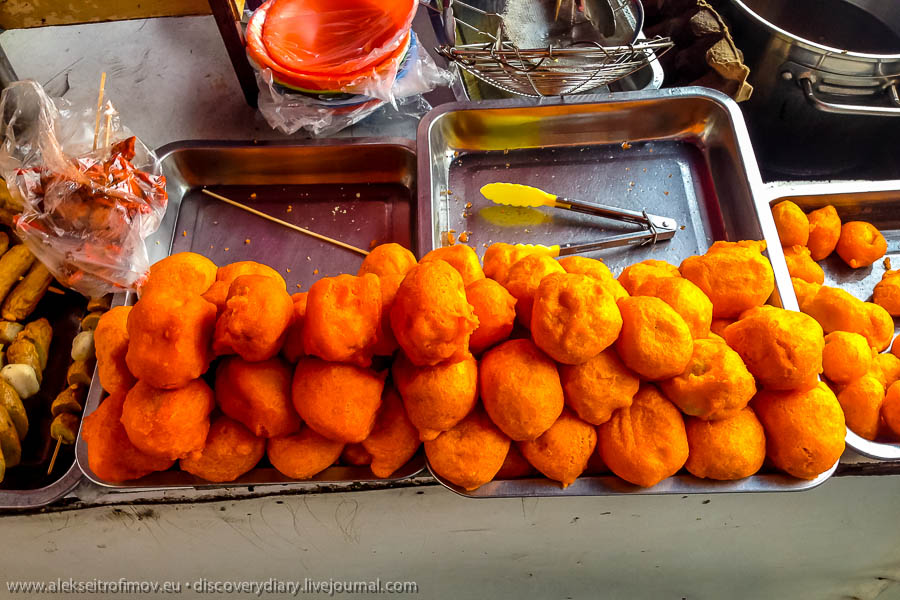 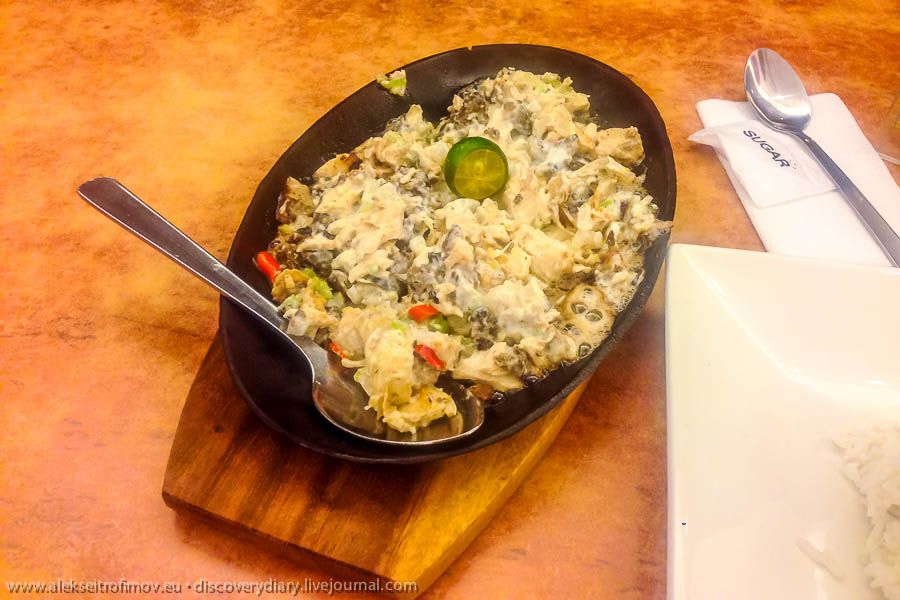 This dish in my favourite Café Adriatico is called Lola Ising Adobo. Adobo in the Philippines is a particular way of preparation meat, different from what they call adobo in other countries. The meat is marinated in a special mix, which includes soy sauce, vinegar and garlic, and then cooked in that broth on low fire. Café Adriatico is famous for its pork adobo, here pictured. Dalandan juice accompanies it. 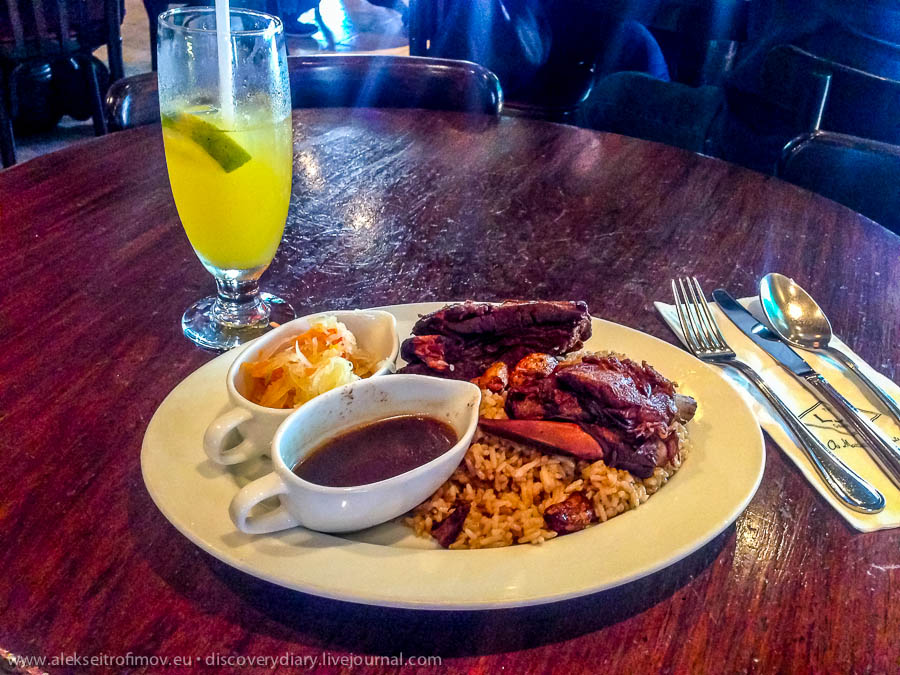 This dish is this post’s most exotic. It’s called balut a la pobre. In general balut is usually eaten as street food. Balut is a half-formed chicken which is boiled and eaten as is, including discernible feathers and some organs. I heard about it and just had to check it out – and then saw it on a menu in a restaurant. A la pobre simply means that it has been boiled, cut and mixed with seasoning. And yet you could clearly feel the feathers on your tongue! As a starter it was an original and tasty treat. San Miguel Super dry beer provides company. 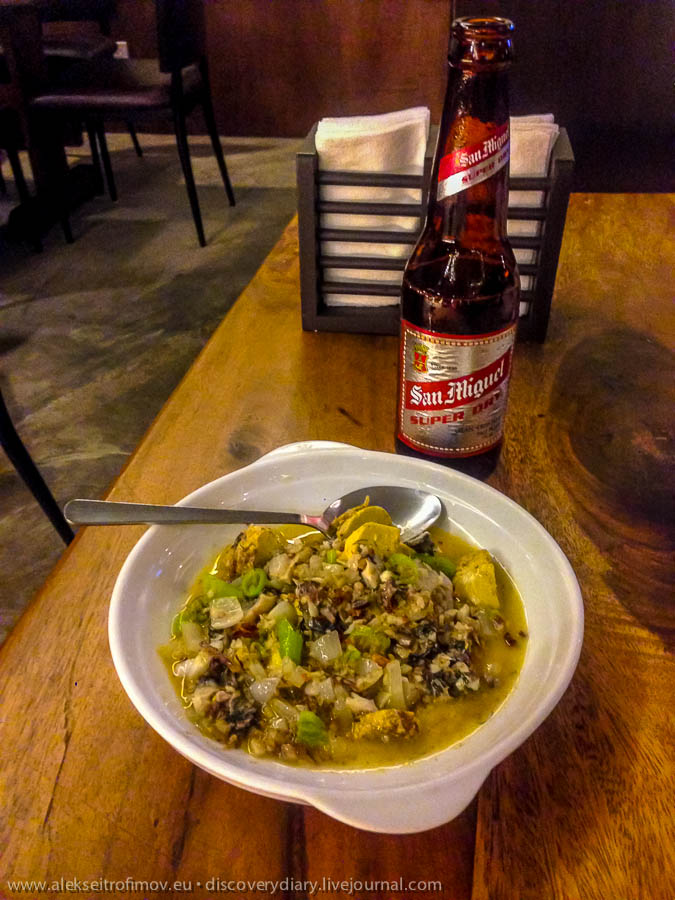 The main dish in this case is nilagang bulalo. There are so many pieces of meat in this broth that it would last me for weeks! For a Filipino person – a light snack. All is swimming in fish and black pepper stock with vegetables. 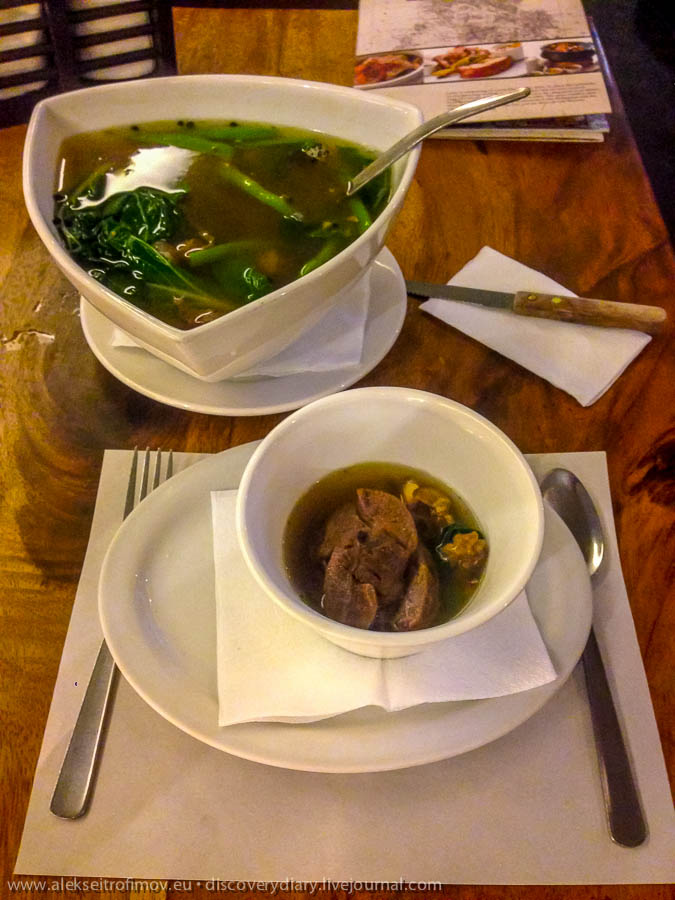 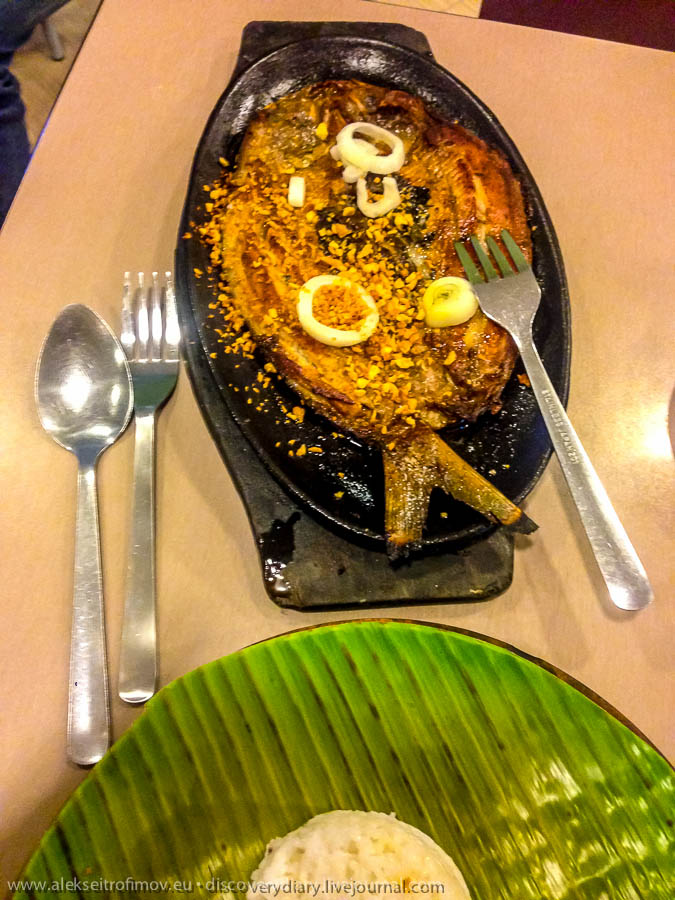 In this same place I spotted neighbours literally licking their fingers and so followed their example by order a dish called paa. We are talking about a mightily baked chicken leg. Yummy! 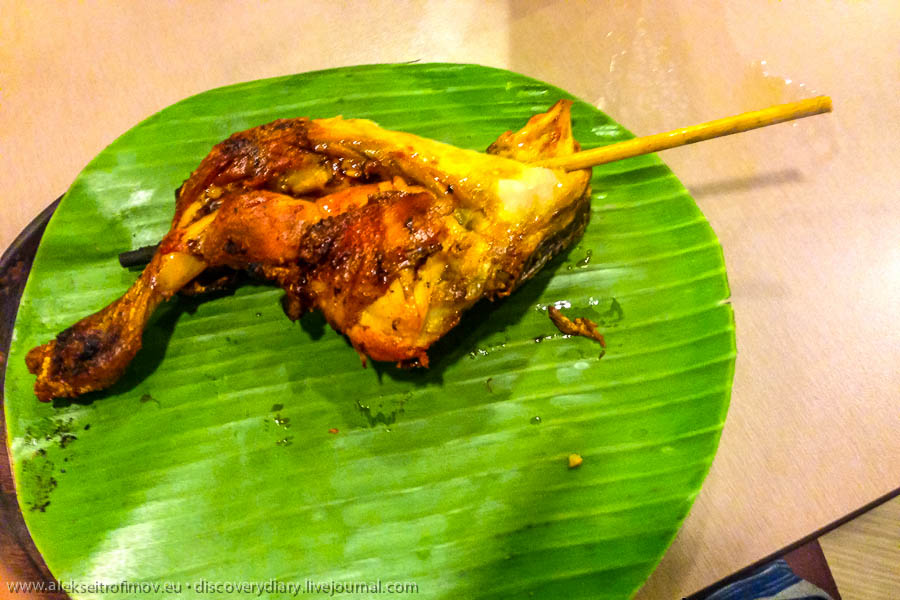 And finally another typical Filipino dessert. The name is puto – clearly it’s not meant for the Spanish speakers. It is a kind of a rice cake. I was mystified by how they manage to swallow it after all the other treats. 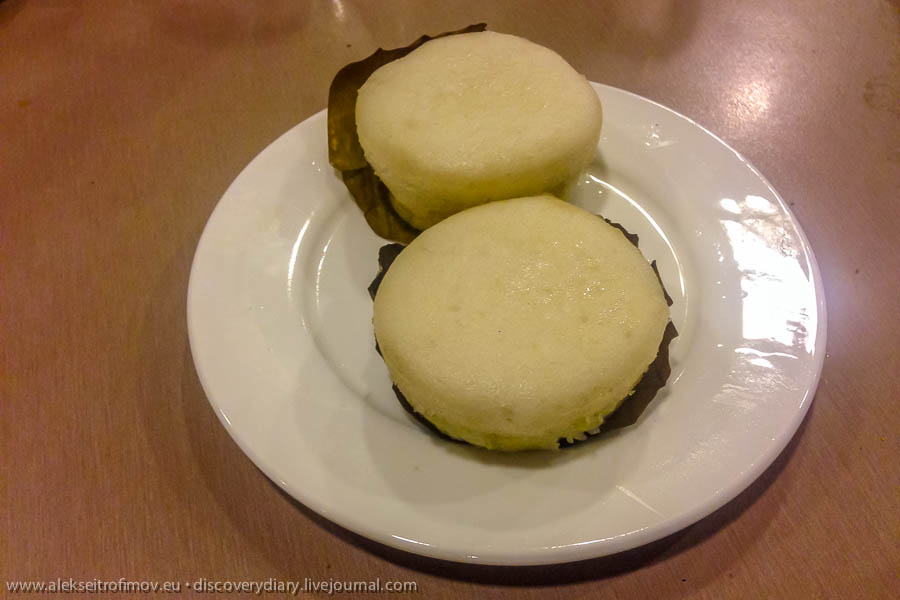 You get the idea of the Filipino food. Not healthy, using all the pieces, but as tasty as it gets!