The first thing everybody says in Argentina when you mention Mendoza is wine. Already 100 years ago there was a large production of wine here, but quality wine production started here only recently – perhaps 20-30 years ago. Today however Argentinean wine is a worthy competitor for Chilean and other “new world” wines. Mendoza is at the centre of it all, responsible for 2/3 of Argentinean wine production. The region is particularly suited to wine production, as it has a predictable dry climate without the surprises that can ruin a harvest, such as a sudden rain right before harvesting. In Mendoza, an arid semi-desert at the foot of the Andes, such an occurrence is out of the question.

Tour operators in Mendoza offer all variety of bodega tours (bodega = winery), but when I heard that a self-guided tour is possible using a bike, my mind was set. You arrive to Maipú area by bus and then rent a bike there. I got to Maipú only around 1 pm, so I expected that I would not be able to see all that much. But active biking got me to three bodegas and one olive farm, which yielded tasting 14 wines. The bike was not going all that straight by the end of the day!

Urquiza street – the main street in the wine region of Maipú. On a self-guided tour you bike a lot on this street. At times the tourist police joins you and follows you for a while, to avoid unpleasant surprises! I thought this was a fairytale, but two French girls I met at Di Tommaso winery confirmed that police had indeed followed them – which they found rather unsettling! 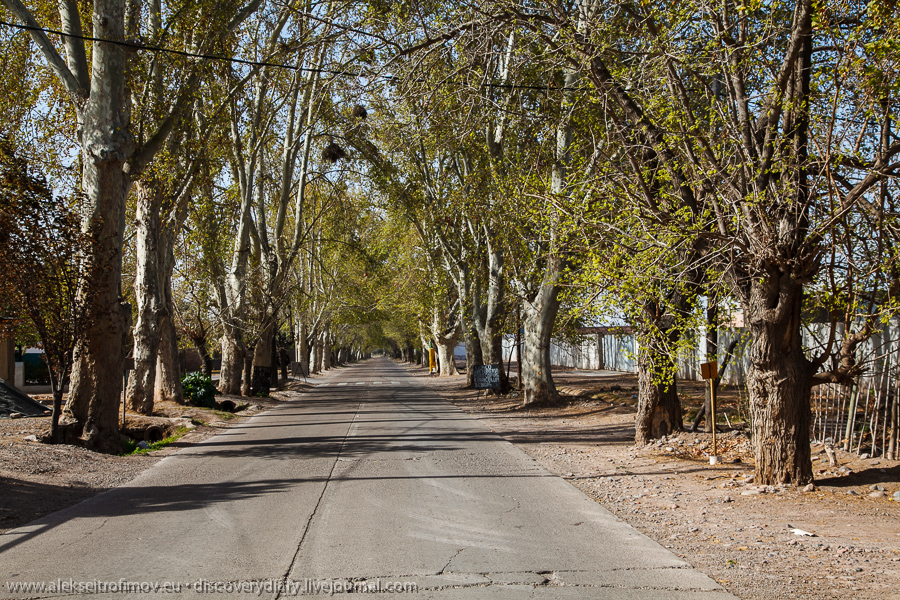 Bodega Florio
The first winery I visited was Florio. 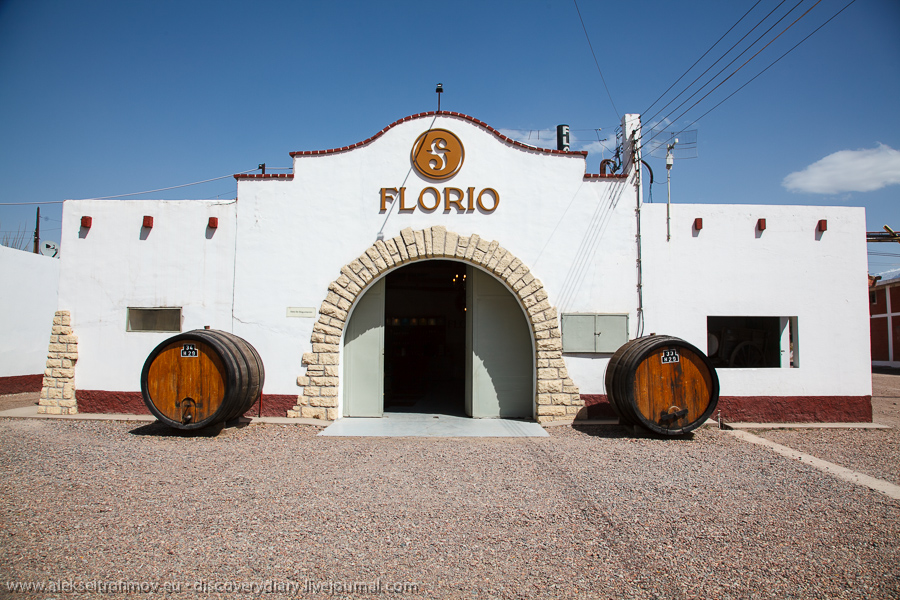 A very nice girl made me a one person tour and a degustation, for all of the equivalent of 2 euros. 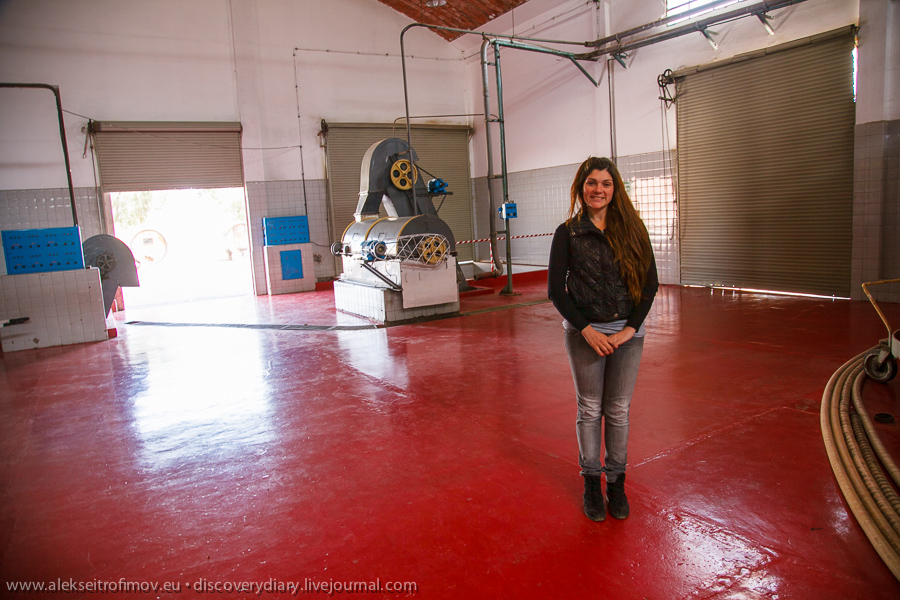 The wine production in Florio is automated. On the previous photos you can see behind the girl’s back the reservoire where the grapes are pit after harvest to produce red wine. The same reservoir: 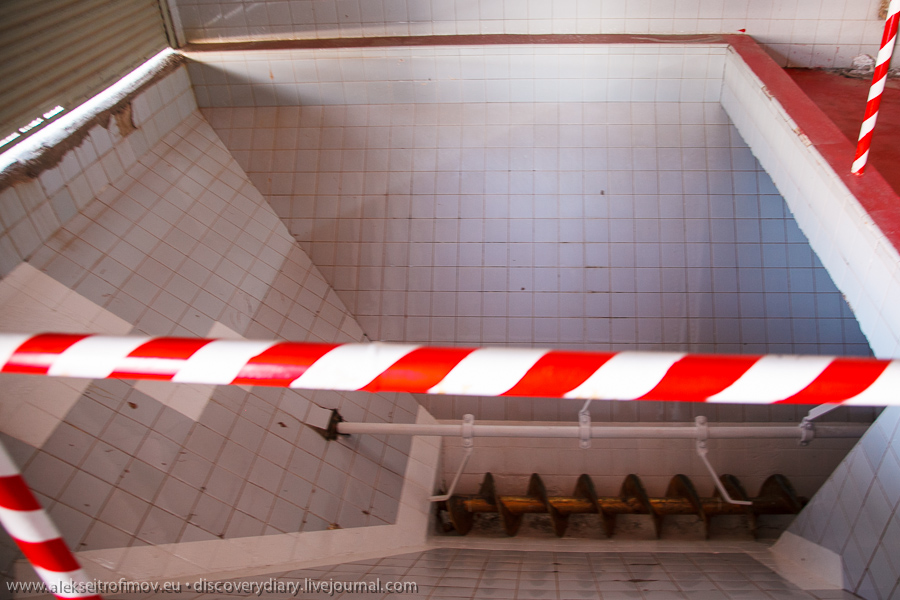 The grapes are mixed and ground in the reservoir, and then the juice together with the solid grape mass is put into giant containers. This is a passage between two containers. The red wine one is on the left and the white wine one on the right. In the white wine container only the juice is put, without the mass, which gives the red colour to the wine (in addition to taste of course). The red wine stays in the container for 15 days. As the consistency of the grape mass and the juice is different, the mixture is mixed all the time using special tubes to recycle them (in the old days it was done by hand). You can see these tubes lying on the ground on the right here. This is done only for red wine. 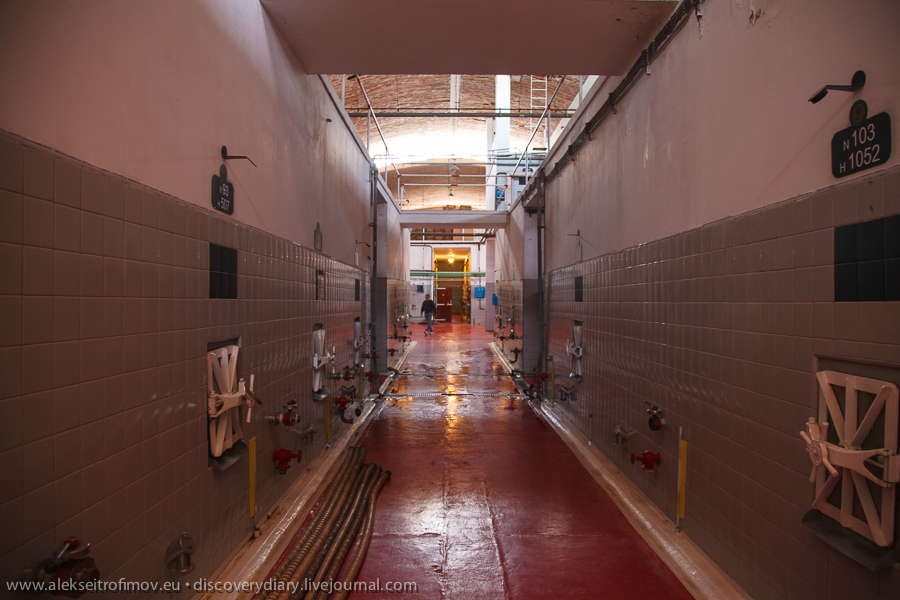 Florio specialises in producing sparkling and desert wines. Thus the next step is to add sugar. Then the wine gets into this area where the wine is bottled. 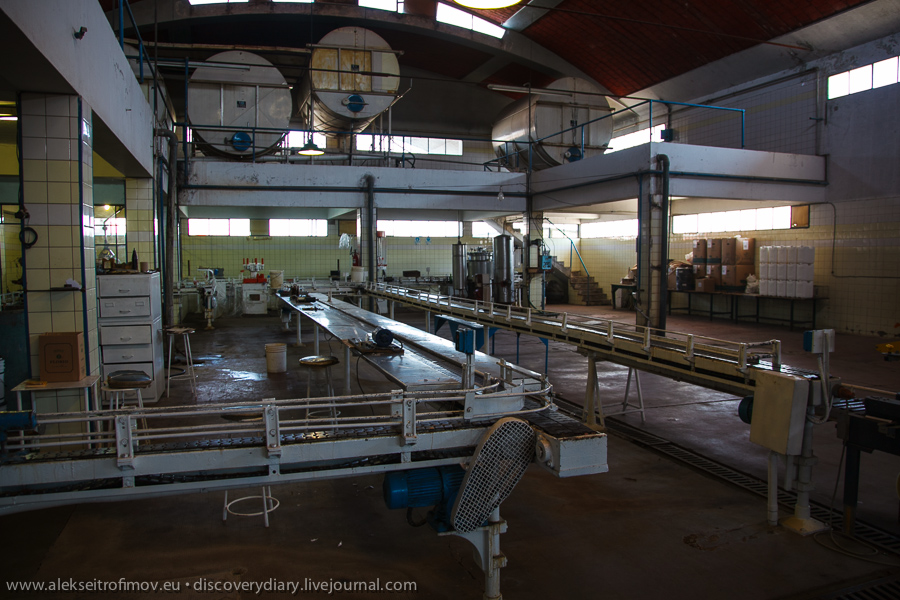 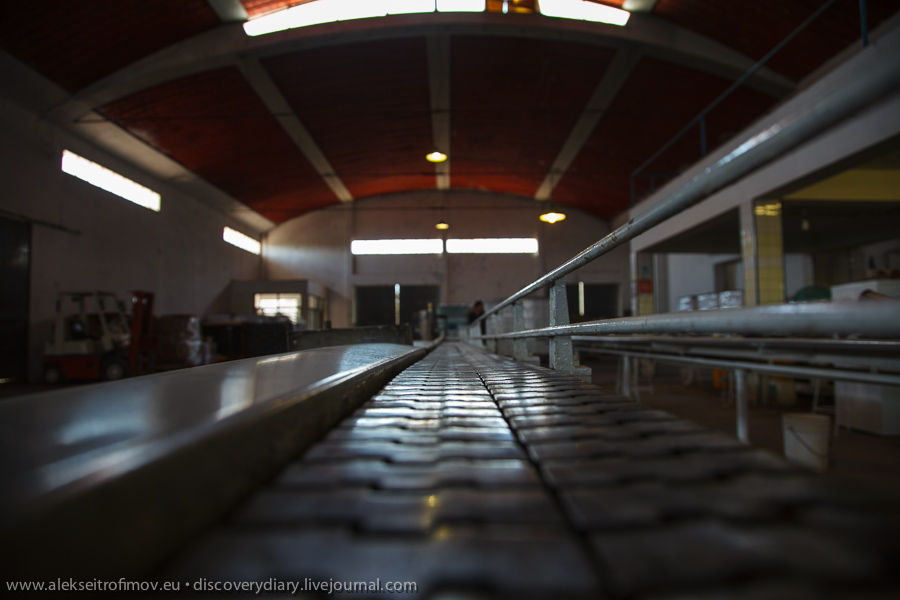 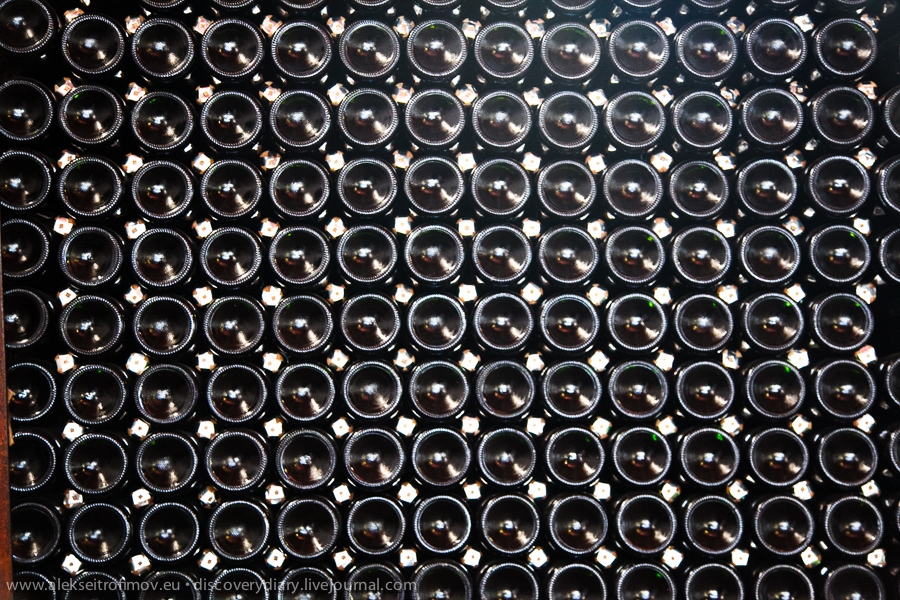 And the most pleasant part – the degustation. I tried four different wines there. Generally of course one should try the sweet wines after all the other types, but it so happened that Florio was first on my route – and so I tried their wines first.
1) Gamba di Pernice – which means “leg of partridge” in Italian – because the correct consistence of this wine would be exactly that colour. Wonderful rosé.
2) Sparkling red wine Neviolo – a rare case of a red wine that is sparkling
3) Aperitif Moscato, strengthened white wine with a caramel taste, basically like the muscat that we know in Europe
4) Sweet red wine Marsala, Florio’s most famous product. It is very popular in Argentina. For example in all the street gelaterias you can order a marsala taste ice cream. It is a dessert wine. In Buenos Aires however marsala is often drunk to accompany pizza. There is even a special type of pizzerias that specialise in this combination. 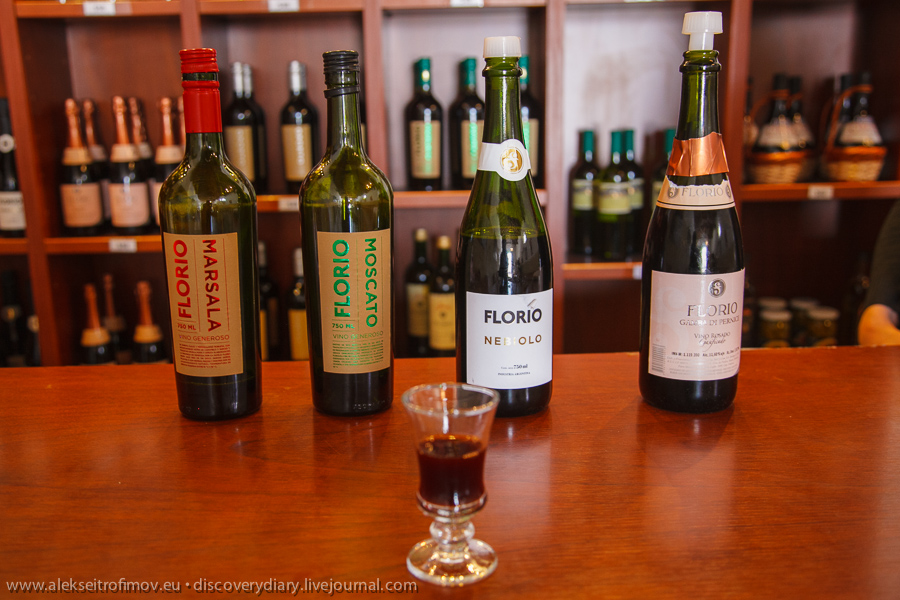 Bodega Carinae
My next destination was the winery Carinae. It is a small winery which was long abandoned. Not long ago a French couple bought it and restored the wine production. Their product line: 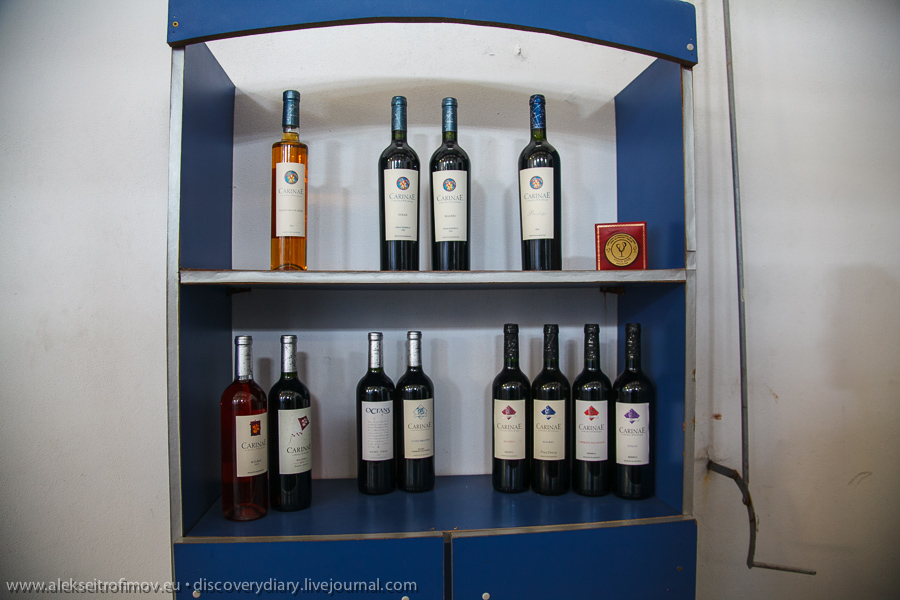 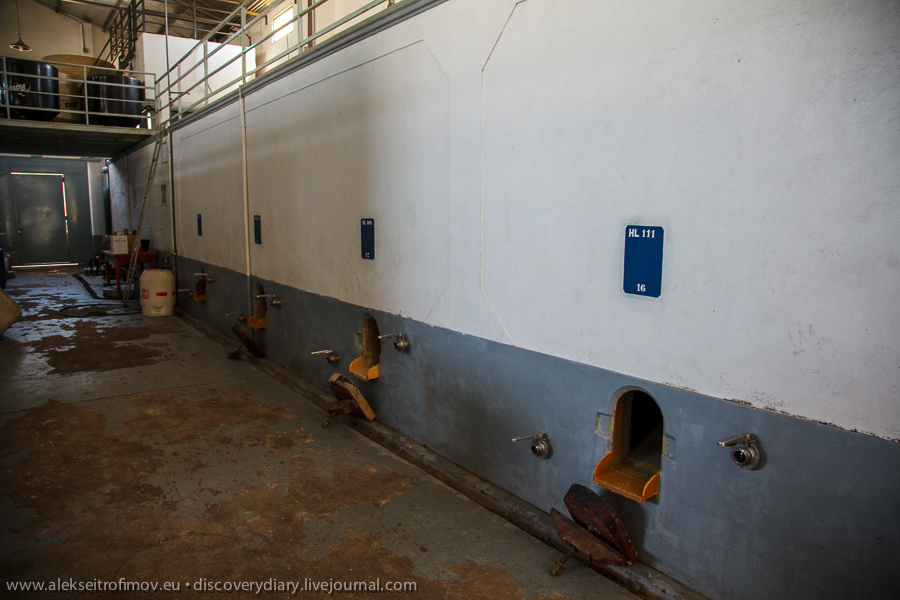 The guide also took me downstairs where the wine barrels are preserved. The barrels are a key element in the production of wine. They must be made from oak as the oak has pores that permit the wine to breathe and to oxidise. There are two main barrel producers. French barrels cost around 1000 euros and are considered to give the wine a structure. The US barrels cost 700 dollars and give a more intense wine. In Carinae they only use French barrels, but American barrels are also widely used by wine producers in the region. Now also China produces barrels, but these are not yet used for quality wine production. 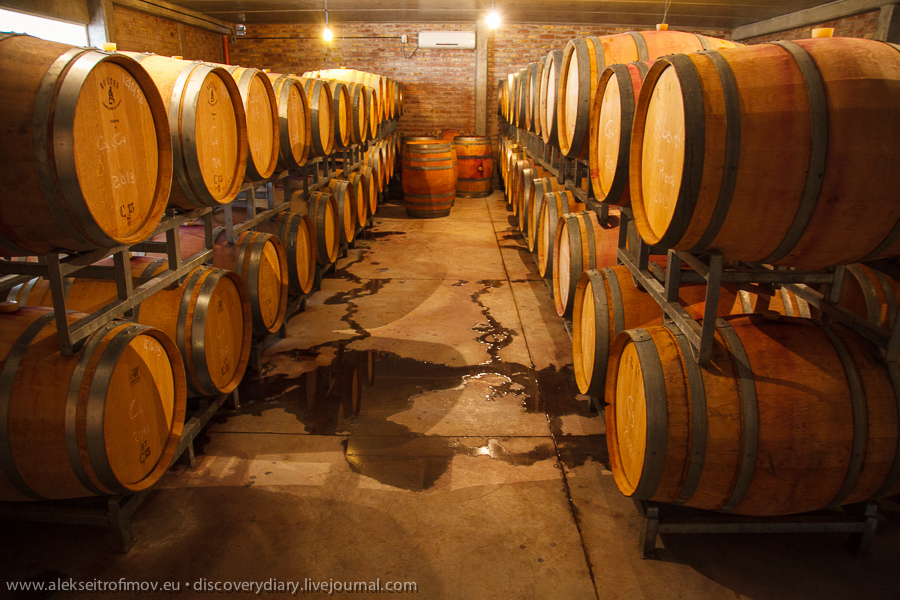 There are several technical parameters which affect directly the price and the prestige (and of course the taste) of the wine of the same bodega:
1. Which barrel was used – the best wines are kept in the fresh barrels; less prestigious wines can be kept in barrels used for 2nd or 3rd time. One barrel can be used up to 5 times; afterwards they are either thrown away or recycled.
2. How long the wine stayed in the barrel before being bottled. The longer the better.
3. How long the bottle was preserved. Again, the longer the better. 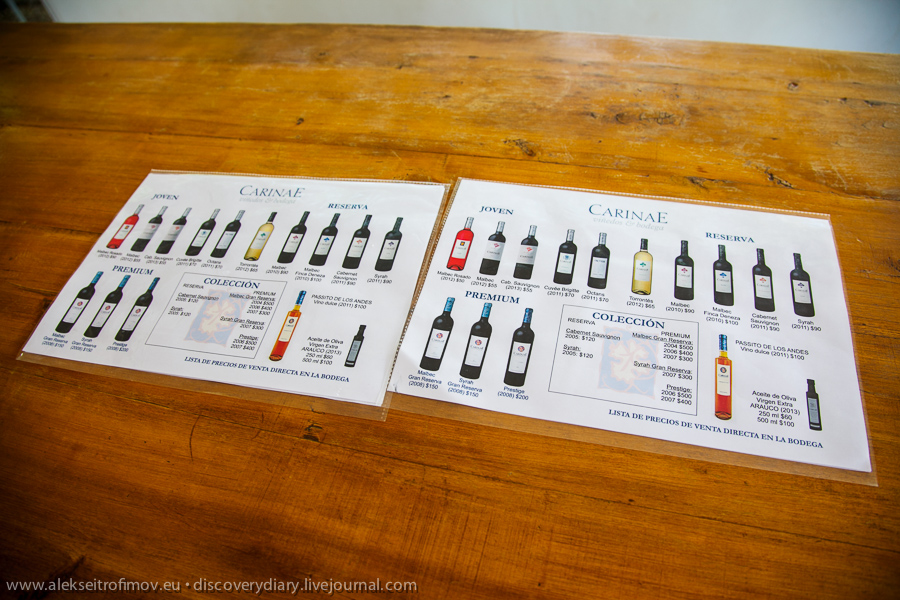 In Carinae there is a wide choice of degustations – you can try 3 wines, or 5, or even 7. I decided to stick to 3 – still a bike ride ahead… Of those a Syrah and Malbec mix was particularly unexpected and pleasant, non-agressive, soft. 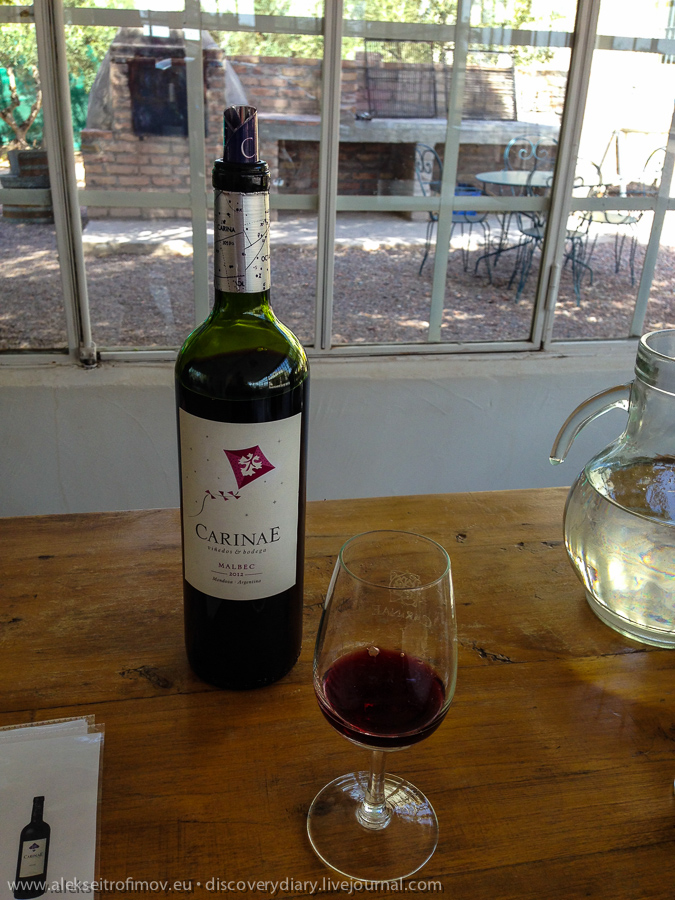 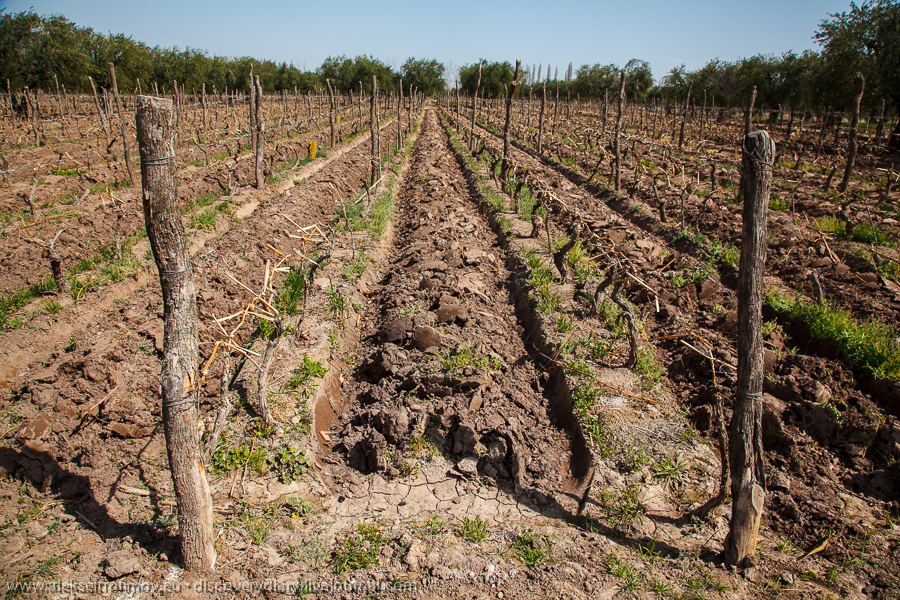 Olive farm Laur
Right across the road from Carinae is Laur, where they produce olive oil and all kinds of related products. Yet again I got an individual tour and a degustation. I was surprised to learn that the green and the black olives come from the same tree, the difference being only the time of harvest, and that an olive tree can live thousands of years. 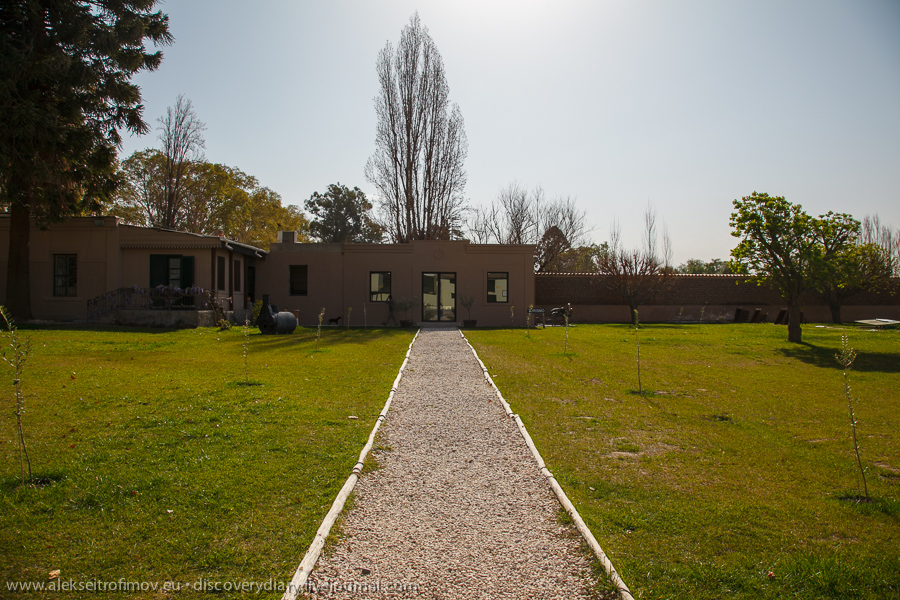 Laur is an old fabric and so you can see the equipment which was used before the industrialisation. These metal presses were used to extract the olive oil (the olives went between the metallic plastines) 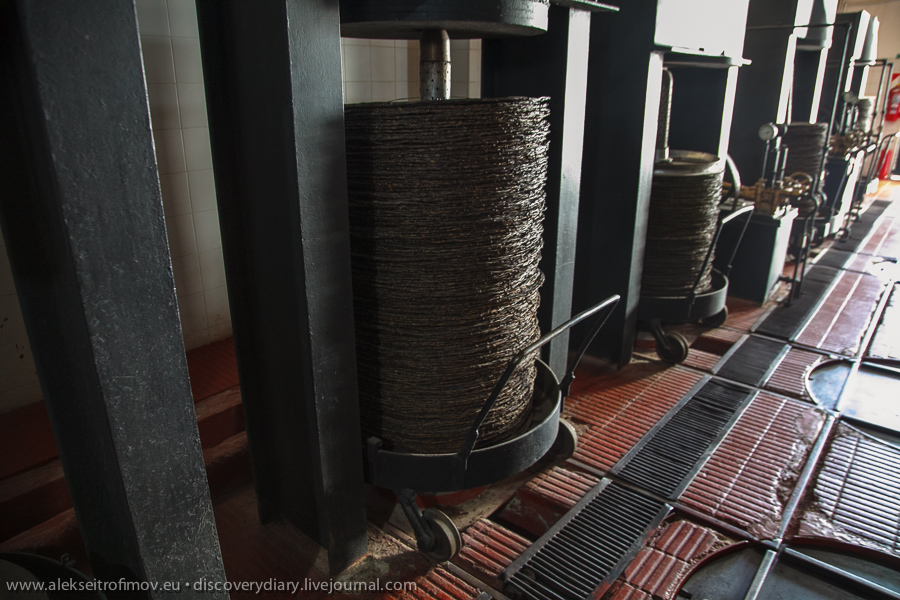 The oil was running to these reservoirs 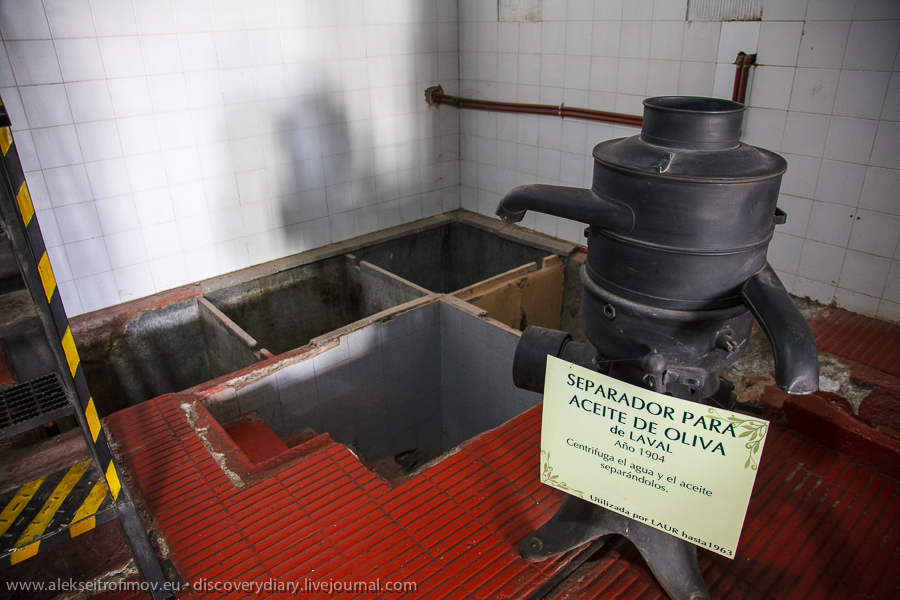 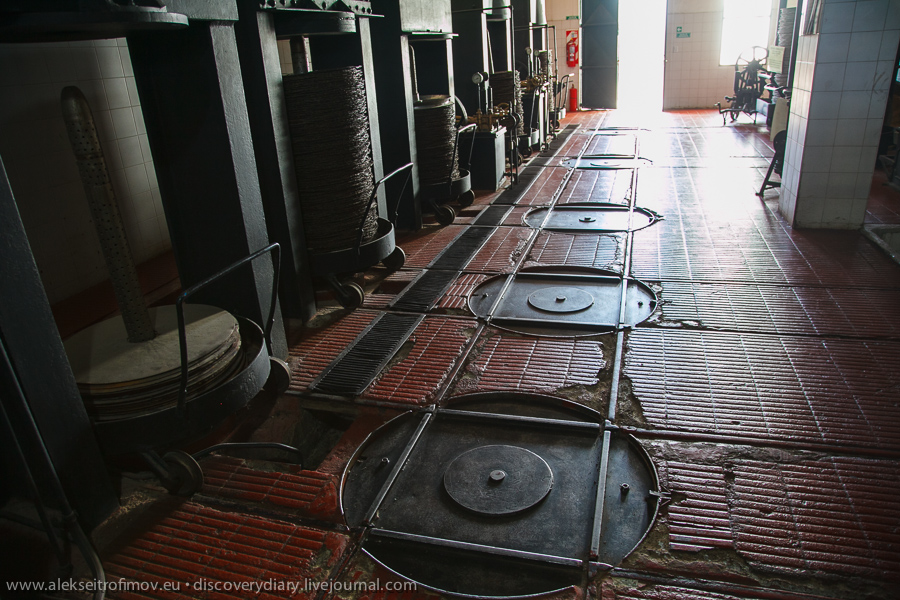 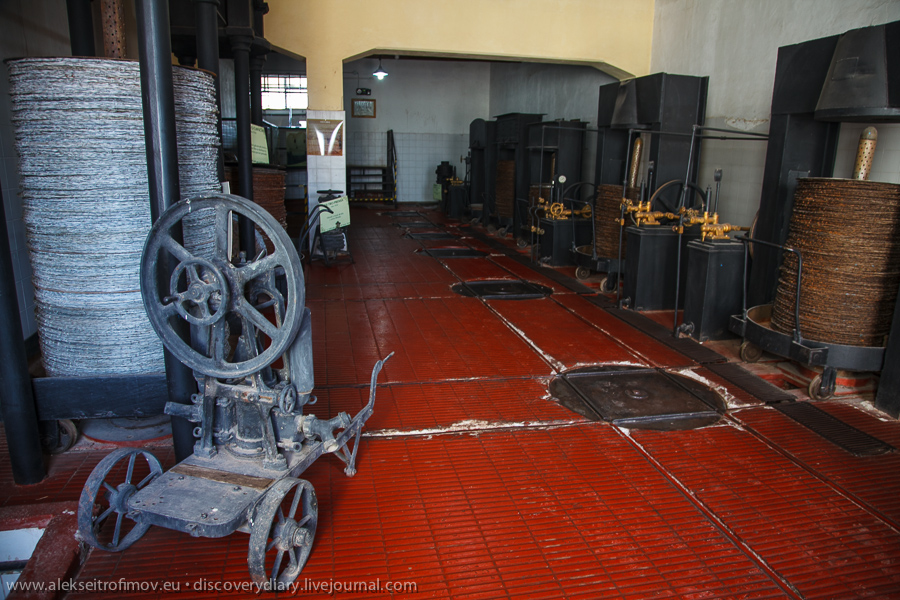 Degustation at the end of the excursion. Wonderfully tasty. 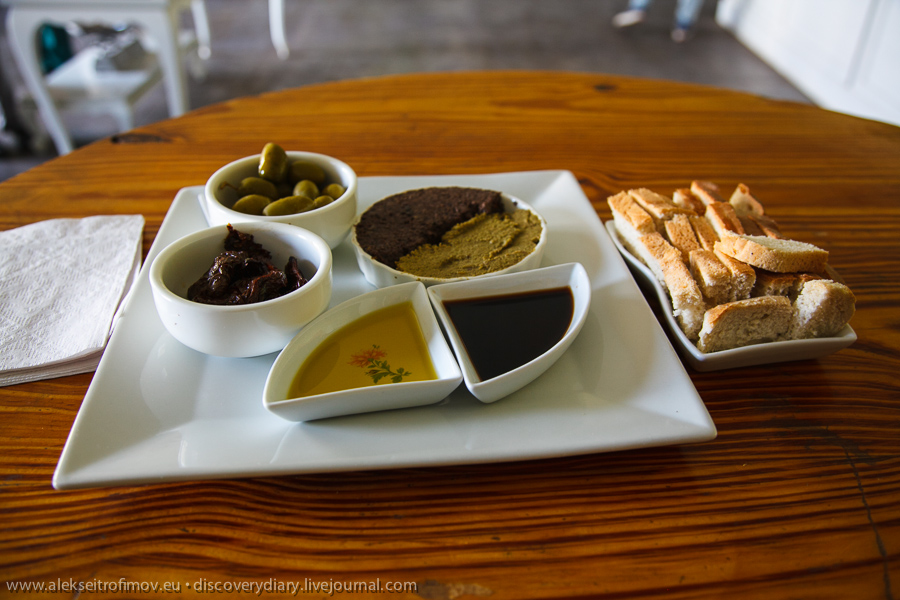 At the very end you can try the four different sorts of prestige olive oil. I must admit that my tongue failed to perceive the advantage of each of these – I couldn’t tell which one is which with my eyes closed 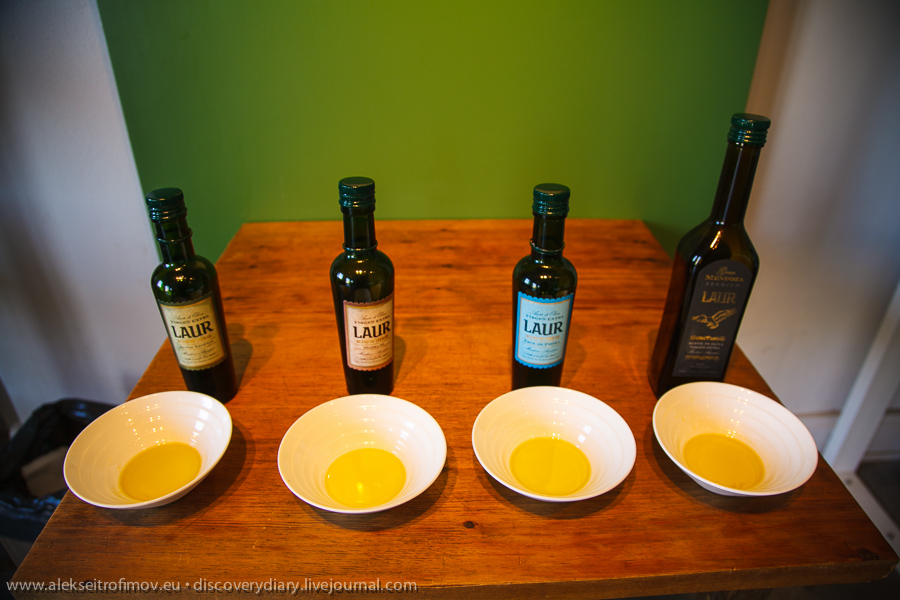 Bodega Familia di Tommaso
The last bodega on my way was Familia di Tommaso. It is a small winery where we got a whole lecture on wine and how to taste it and drink it. Several other visitors happened to be there at the same time.

The tour of the winery. These old containers are no longer use actually, more functional industrial containers have replaced them. 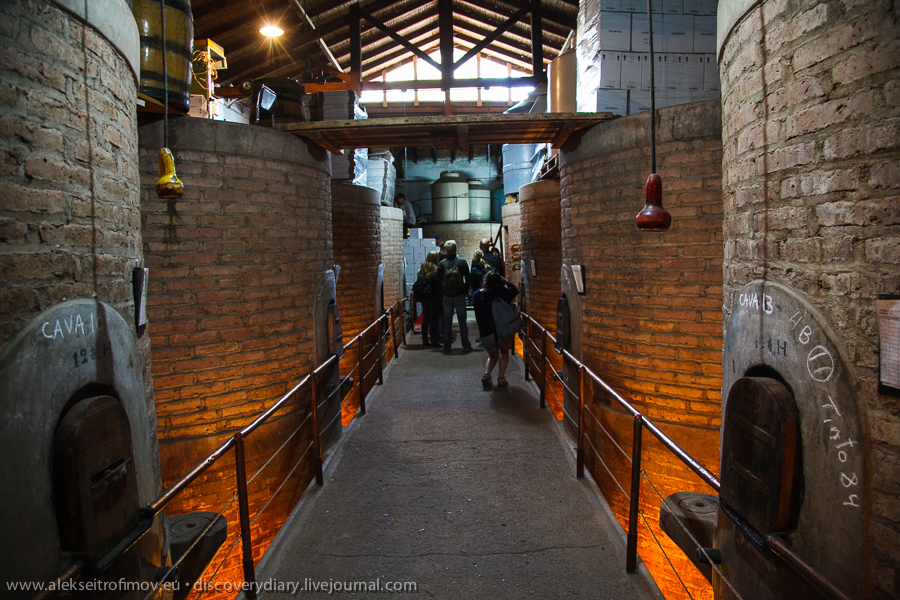 Barrels full of actual wine. Every barrel has an opening at the top, covered with cork, but basically accessible – you can try the wine at any moment. 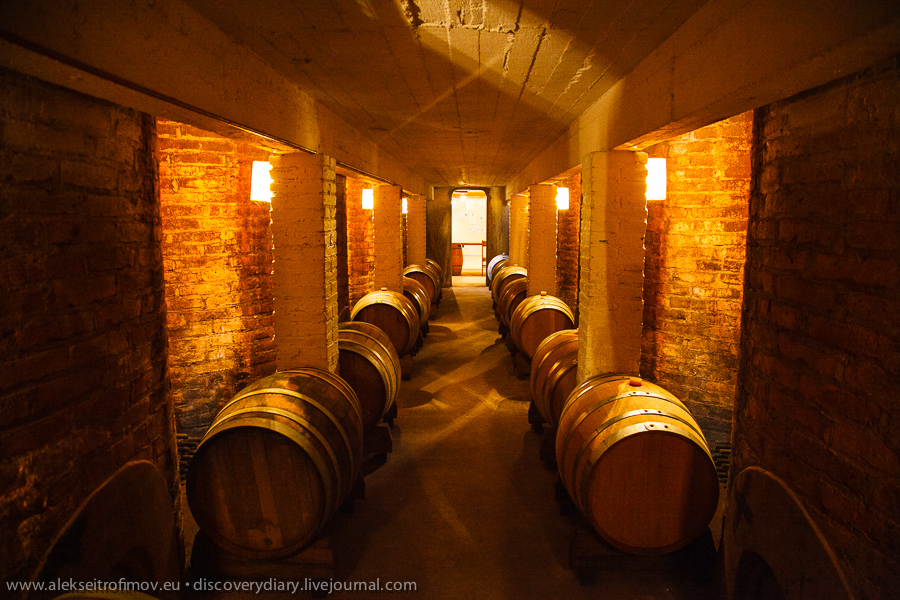 So called etalon bottles. The winery keeps at least one bottle of every harvest and type, which helps to settle in case there is a dispute on the wine quality later on. 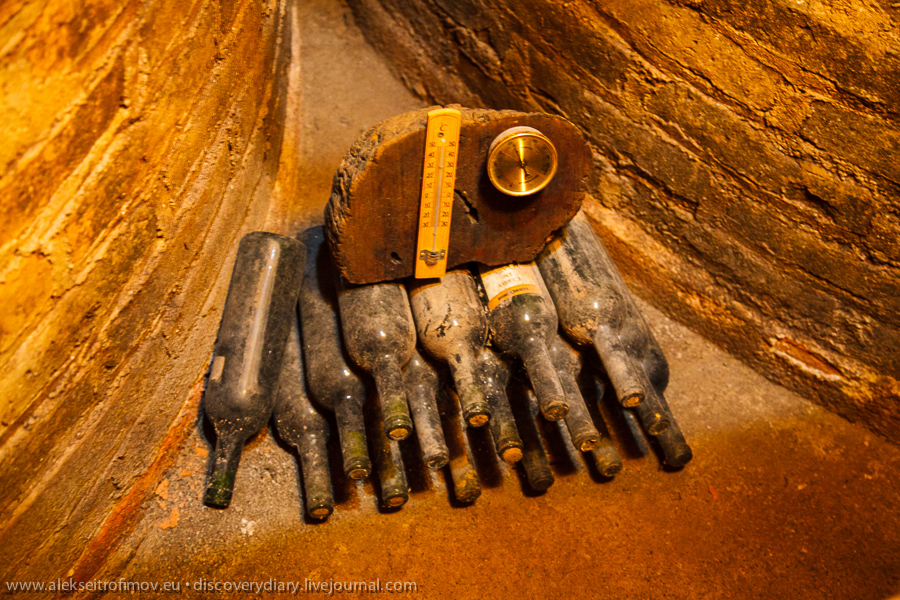 All of their products 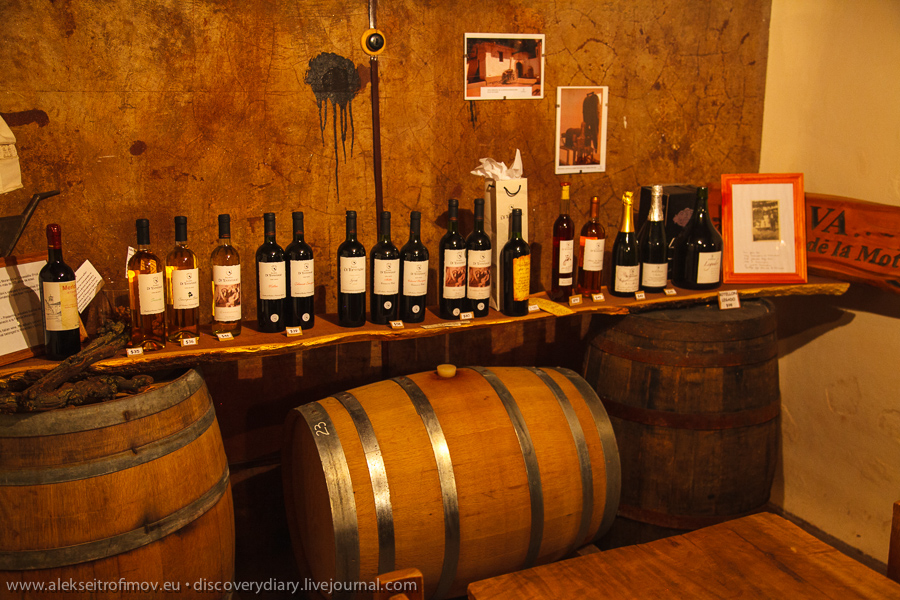 Finally, the degustation. They make wine from very fashionable at the moment Torrontés sort, as well as Cabernet Sauvignon and of course Malbec. Malbec is generally descended from a French sort COT, not particularly prestigious. But in Argentina Malbec shows itself very well and has become synonymous with local wine. 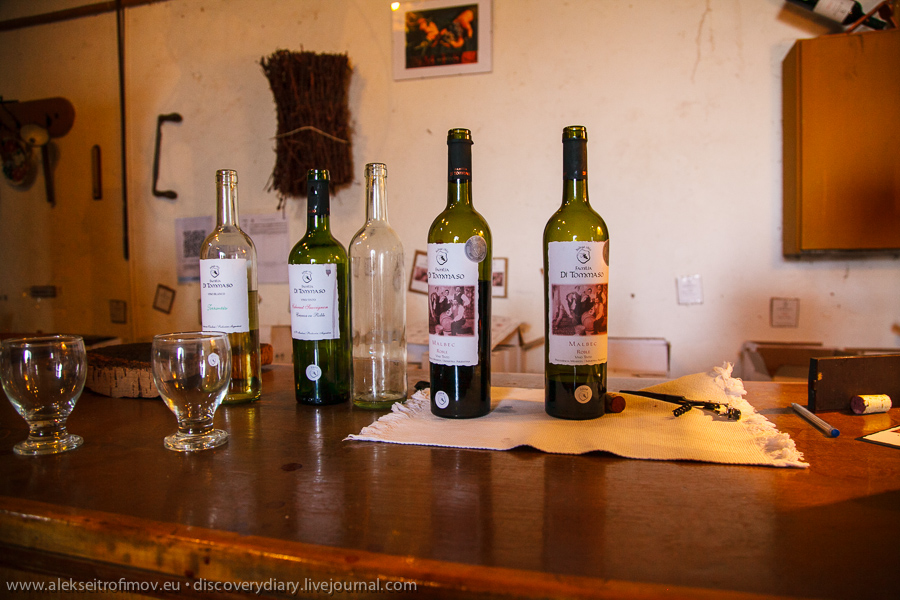 At the end of the tour in the bike renting place the owner put us in his garden and gave us another cup of sweet white! That’s the Mendoza spirit.