Welcome to the city state of Kuwait! Kuwait is quite unlike the rest of the Gulf states. To start with, Kuwait is the richest of them all. In terms of oil reserves per capital, it beats even the almighty Saudi Arabia. My local acquaintance boasted that it’s enough to stick a finger in the ground and the oil will come gushing out. On the other hand, Kuwait was the epicentre of a still recent and still painful national tragedy. The invasion by the troops of Saddam Hussein in 1991 has shaped the national character. A whole generation of young men was eliminated. Kuwait City (and there isn’t anything else in Kuwait, the rest is an empty desert punctuated by oil wells) was utterly destroyed, looted, burnt by the retreating Iraqis, when the overwhelming might of the coalition forced them to flee Kuwait.

But in the case of Kuwait there is no ostensible hyper compensation. The Kuwait City centre is strictly functional, there are no new eye catching buildings that you would expect from a country risen from the ashes. Obviously this is not a question of money. Rather it is the conservative culture that prescribes focusing on the private space, hiding all wealth from jealous eyes of an outsider. Only recently the government took a decision to build a proper national museum and to renovate the Kuwait Towers – more on that later.

The first glimpse of Kuwait from a plane window: 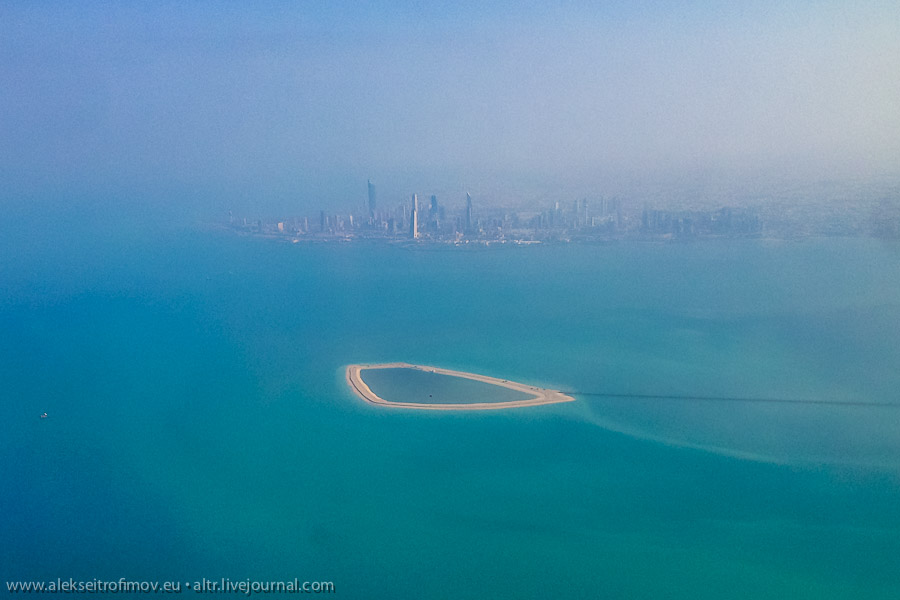