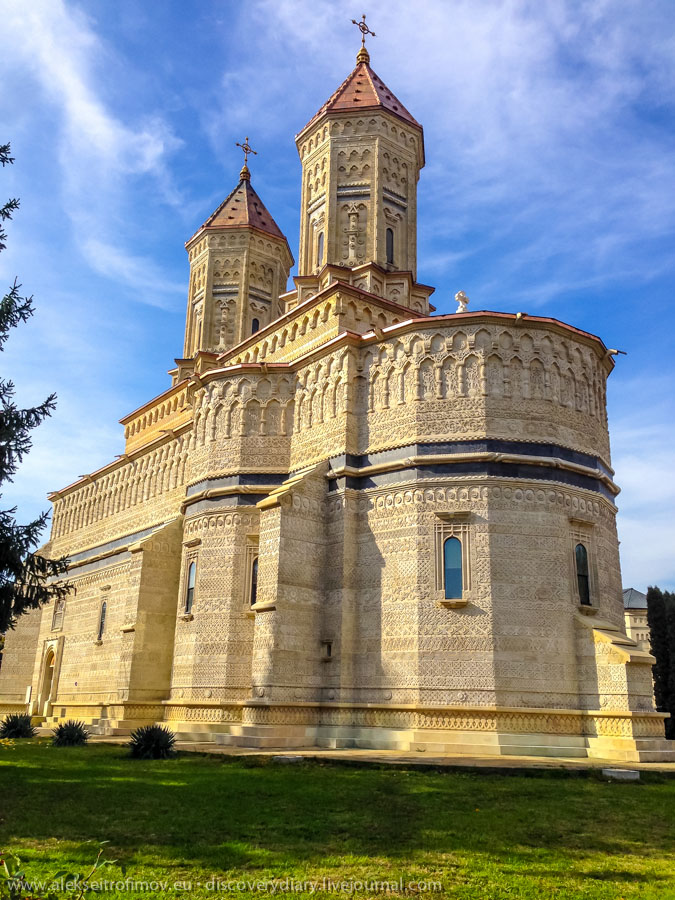 END_OF_DOCUMENT_TOKEN_TO_BE_REPLACED

The fairytale-like German Siebenbürgen in Transylvania was comprised of seven towns:

From our base in Cluj we rather spontaneously set out to visit some of them, without determining a precise route. With our daily backpacks we simply arrived to a Cluj bus station and bought the most convenient ticket – to Sibiu. As we had boarded the bus, I opened my iPhone and booked via booking.com a room in Sibiu for the same evening – the wonders of having a local sim card!

At that time Romania was in the throes of a presidential campaign. I was there right before the first round of the election, and most of the public spaces were filled with the ads of one candidate – Victor Ponta, the current Prime Minister. In Sibiu however the second candidate dominated – Klaus Iohannis. It was no coincidence that his name sounded German – he was a representative of the local German minority. Moreover, he was the Mayor of Sibiu, which explained why he was so omnipresent there. All polls predicted a victory for Ponta, which did materialise in the first round. We know now that it was Iohannis that prevailed in the second and final round, against all odds. The key factor was the vote of the diaspora Romanians who all went for Iohannis, anointing him as a symbol of fight against corruption, whereas Ponta was perceived as closely associated with “business as usual”.

I remember the evening after the first round. We were sitting in a pizzeria in Cluj and all the Romanian TV channels were beaming the same images of widespread protests by Romanians in various European cities – London, Paris, Munich. So agitated were the protests that clashes with the police happened in many places. The reason was the fact that the Foreign Ministry (probably by design) had installed far too few voting booths in embassies, which prevented many diaspora Romanians from voting. Endless queues of angry voters were shown in a loop. I was surprised then that this was such a scandal, and only after the results of the second round where everyone could vote did I realise its significance.

One of the reasons why Iohannis had such a positive image was the transformation that he managed in Sibiu. No small help was the status of European Capital of Culture that Sibiu won. Indeed when you are there you can hardly believe you are in Romania – it seems like a magic carpet has instantaneously moved you somewhere in Austria or Bavaria. German speech can be heard on the streets due to many German tourists. There are direct flights to a number of cities in Germany. The only thing betraying we’re in Romania are the prices. Even in the restaurants on the main squares they are much lower than in comparable places in Western Europe. If you take the trouble of walking to a side street, super tasty Romanian food can be had for a euro or two – that’s where the locals go. 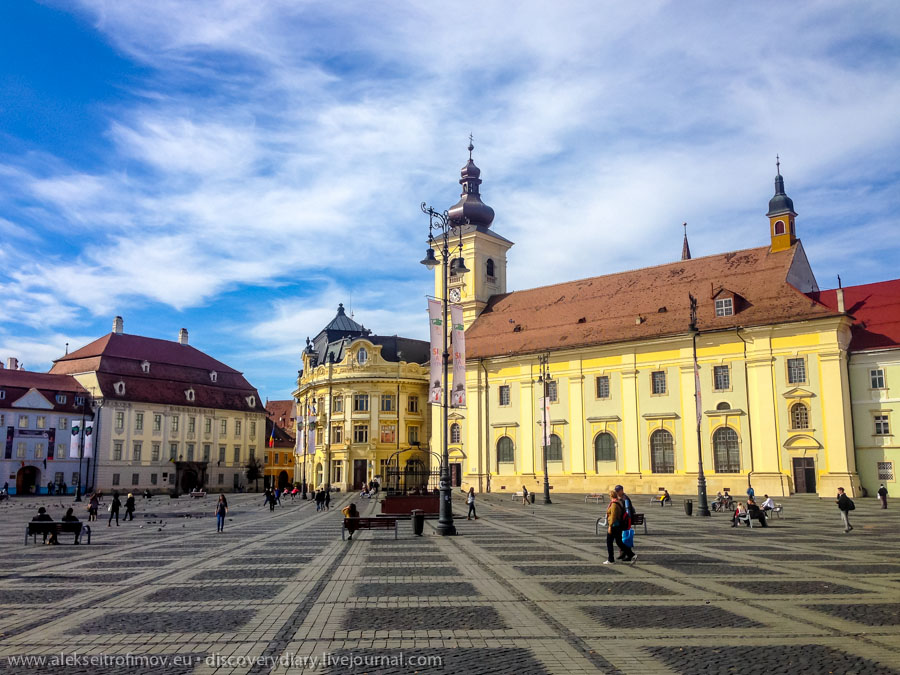 END_OF_DOCUMENT_TOKEN_TO_BE_REPLACED

From the feast of life called Seville, I departed for the Canary Islands. My photos from the Islands are still trapped on the flash memory card which was in the deceased photo camera. Thus I postpone the report on the Canaries until the time when I can liberate them. And so on to the next stage of my trip – Romania.

I first visited Romania only this summer – see my post about Bucharest here. This time around I was based in the second largest city in Romania, which is called Cluj-Napoca. It is the informal capital of the region of Transylvania.

If you look at the map of Romania, at first sight it looks like a coherent geographical unit. The political map though hides an important geographical reality – the Carpathian mountains, which act like a knife that cuts off from this single unit it’s North-Western slice. This slice is Transylvania.

The three major regions of Romania are Walachia, Moldavia and Transylvania. Unsurprisingly given the geography, historically they have never actually formed a political whole. They only ended up inside a single country after WWI, as the winners of the war imposed a harsh justice on the losers. This meant among many other things the break up of Austro-Hungary, which gave Transylvania to Romania. If the Romanianness of Walachia and Moldavia was never in doubt and these two principalities had periodically formed a political union, the destiny of Transylvania was always pointing towards Hungary. To this day this region has a large Hungarian minority and is strikingly different from the rest of Romania. As you would expect, the result is a rather heated argument between the Hungarians and the Romanians as to who was here first. The Hungarians would claim that when their ancestors arrived here in 10th century, the land was empty and the Romanians started settling here only later. The Romanian version is (naturally) the exact opposite.

Be it as it may, in the Middle Ages the Hungarian king decided that Transylvania was not sufficiently populated and issued an invitation to the inhabitants of his other possessions, mainly Germans, to settle here, accompanied with significant incentives. Consequently large numbers of Germans came to live here and a German culture flourished, leading to the creation of a fairytale-like land of Sievenbürgen – the Seven Towns of Transylvania, famous for their beauty and prosperity.

Cluj-Napoca plays an important role in all of these narratives. It is an ancient settlement founded by the Romans themselves – which is the reason it is held up by Romanians as the proof of their deep connection. Hungarians call the city Kolozsvár. Indeed even today it is easier from here to go to Budapest than to Bucharest. Finally the Germans call it Klausenberg – a jewel in the crown of Siebenbürgen.

The very name Cluj-Napoca is a paradox. Cluj comes from a Latin term meaning a closed castle. The old Roman castle was called Napoca. Thus in the 1970s Ceaușescu added the word Napoca to the familiar city name, in order to further establish its Romanian character. The resulting tautological hybrid in my mind sounds rather silly. It is an eternal reminder of the contested character of the place.

After WWII Hungarians formed 80% of Cluj’s population; today the proportion has reversed – 80% are Romanian. This was achieved by a massive infusion of Romanian population – Cluj grew four times during this time.

Cluj is paradoxical also in that it is almost like two cities in one. The whole topography of the place is divided into two. There are two Cathedrals: a Catholic one in the West (for Hungarians) and an Orthodox one in the East (for Romanians). The buildings and historical memorials grouped around each of the Cathedrals are correspondingly Hungarian and Romanian. The two clusters are in eternal opposition – even the wide boulevards connecting the two centres highlight this opposition. On one of such boulevards the Capitoline Shewolf is obviously meant to insist on the Roman(ian)ness of Cluj. A view from East to West: 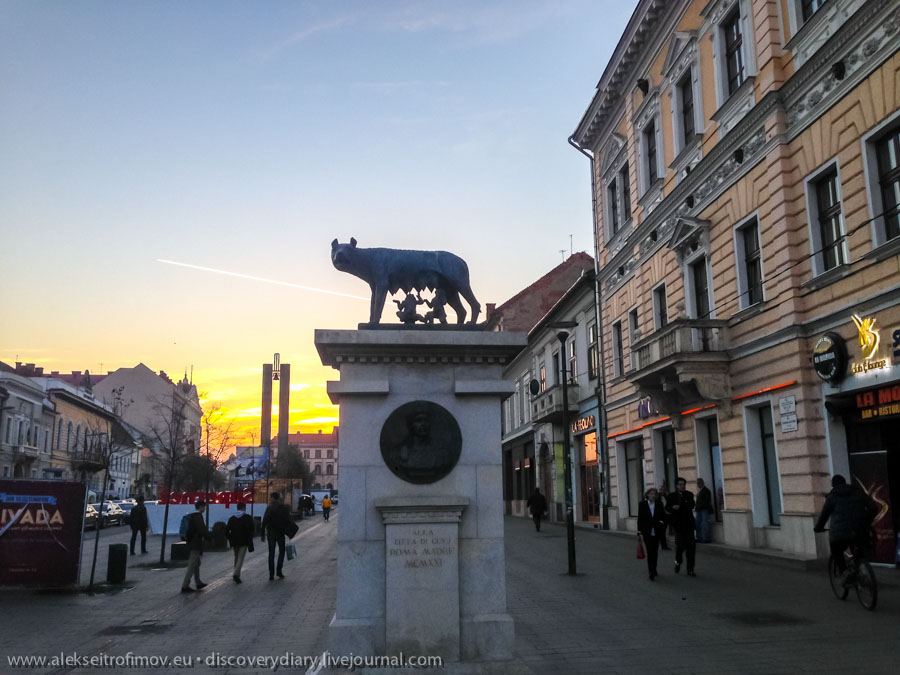 END_OF_DOCUMENT_TOKEN_TO_BE_REPLACED

Romania was the only EU country I had not visited. Therefore as I found myself close, I simply had to make a stop there. Thus from I took a plane from Istanbul to Bucharest – a very short flight. Now my score for EU member states is 28 for 28. I decided to spend three days in Bucharest – arriving on a Thursday and leaving on a Sunday.

Easily the most important – dominant – structure in Bucharest is the Palace of the Parliament. Formerly known as the Palace of the People, it is the monstrous child of Ceaușescu’s imagination that required razing half of the centre of Bucharest to clear space for it. The view from the East – the closest it comes to a façade. I have got a photo with people and cars in front of it, but this photo – underlining its aloofness – seems more fitting.

The Palace is the heaviest building in the world, as well as the second largest after Pentagon. Ceaușescu conceived it as a unitary seat of power, the residence of all branches of his communist government. The Palace was built over many years, consuming the resources of what was (and still is) a very poor country, but he never moved in – the revolution intervened. The area that had to be cleared is the size of Venice, and farewell was bid to the old Bucharest, the Paris of the East. Looking at this bizarre building, you cannot help remembering the Egyptian pyramids or the otherworldly Ryugyong Hotel in Pyongyang, also never to be finished. 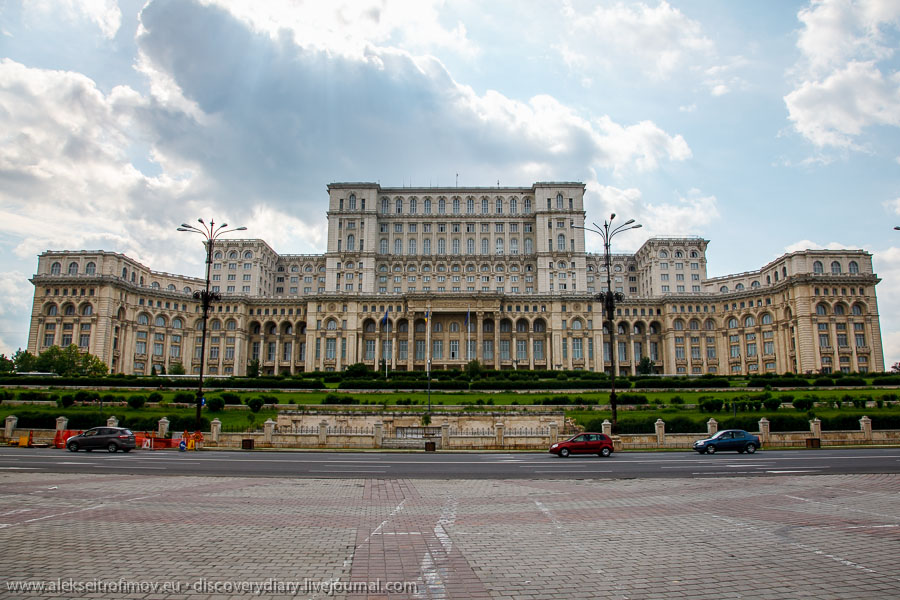