My rather expensive hotel was located on the edge of the city. In Haiti there are practically no hotels in the middle price category. There are either complete rubbish holes for 10 dollars or “luxury” hotels for “rich foreigners” for 100 dollars and up – whose expenses are anyway reimbursed by their international organisation or company. Afte some hesitation, I decided to pre-book an hotel and picked the cheapest of the “expesive” hotels – which turned out more than enough for me. My Korean friend on the other hand set out to one of the rubbish hotels mentioned in Lonely Planet. Next day I accidentally bumped into him and with his unfathomable smile he explained that his hotel was “very basic, very basic” – but cost all of 10 USD!

No one wants you to pay by card in the Dominican Republic: I guess either they’re hiding their revenues or are avoiding the credit card commissions. To my extreme surprise in my hotel in Haiti paying by card was no problem at all! A refined black man behind the counter spoke to me in absolutely perfect French and quickly performed all the necessary manipalutions. And here I am in my hotel room! As it was already dark, I decided to have a dinner in the hotel and head out to explore Cap-Haitien the next morning.

My first impressions of Cap. 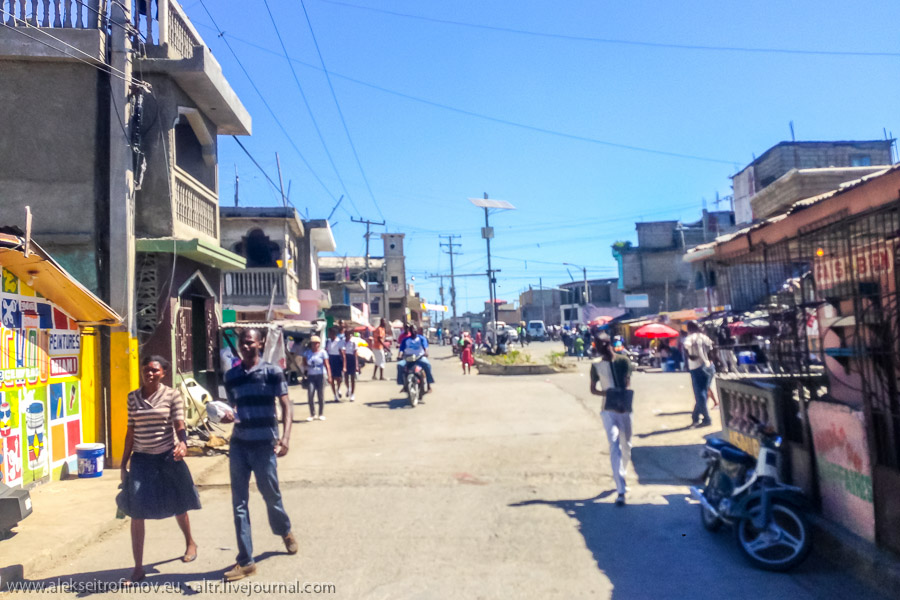 I decided to explore the centre on foot – so at first I was looking at unkempt suburbs. 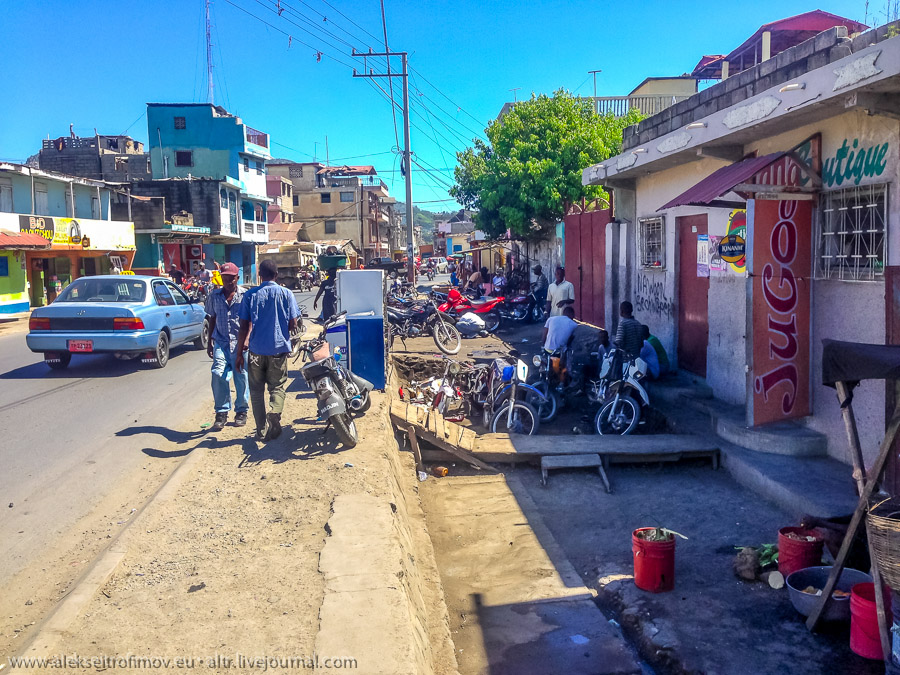 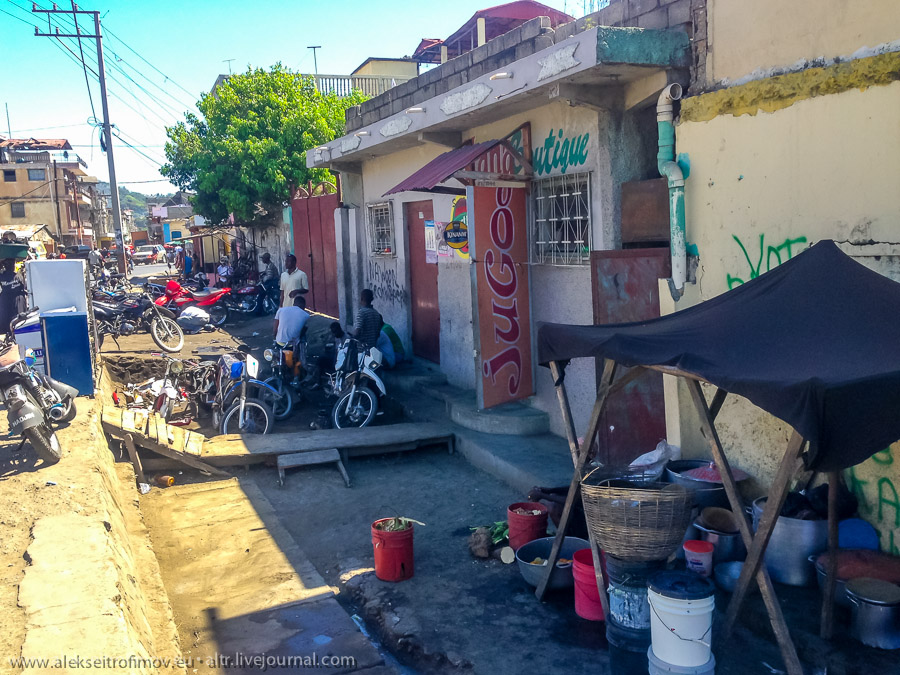 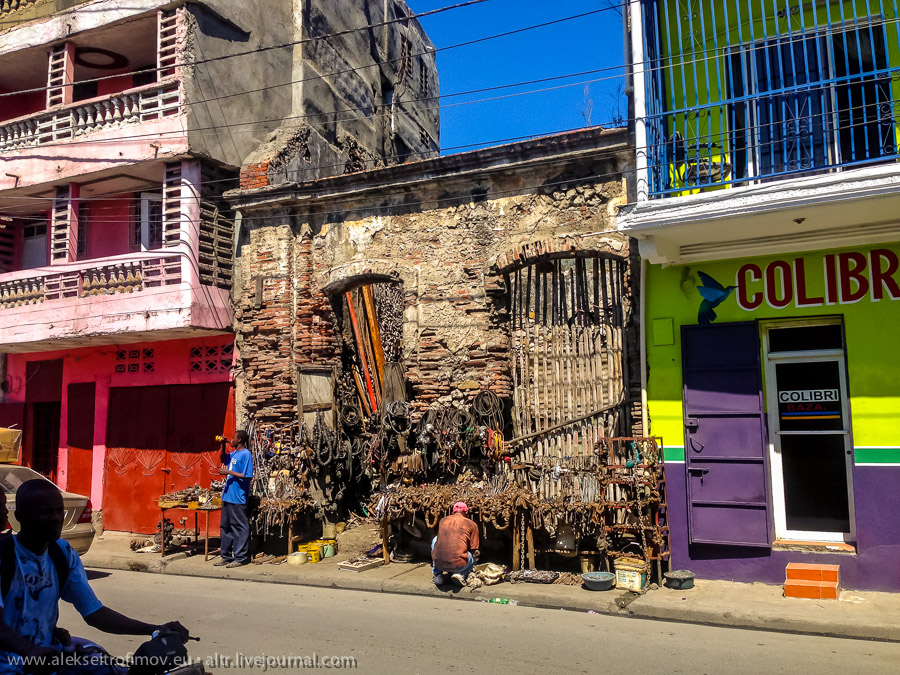 The beginning of the true historical Cap-Haitien, the one that makes travellers lament on how the Haitian architectural heritage is not preserved as it should be. 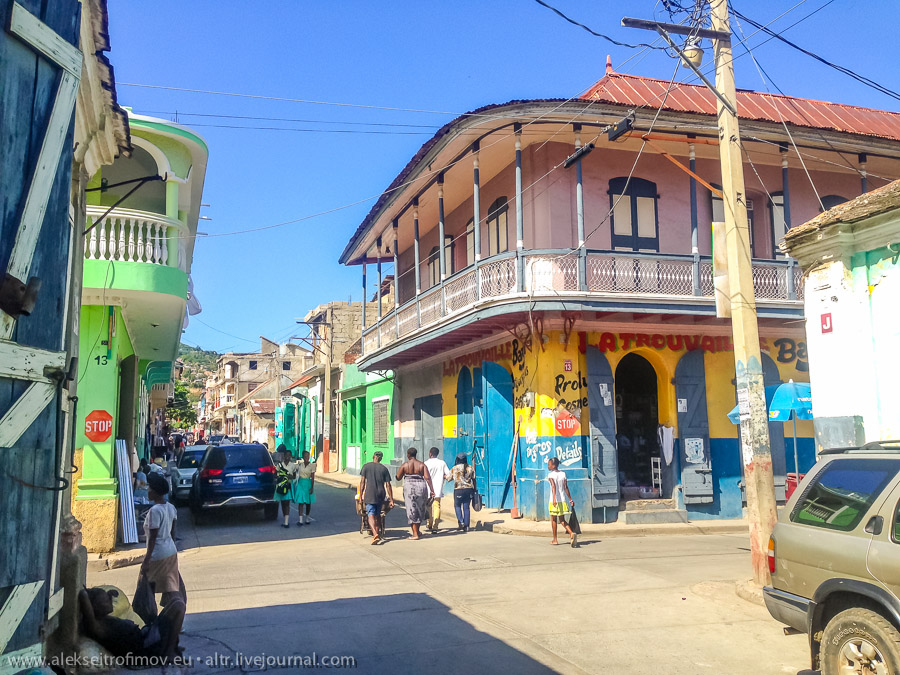 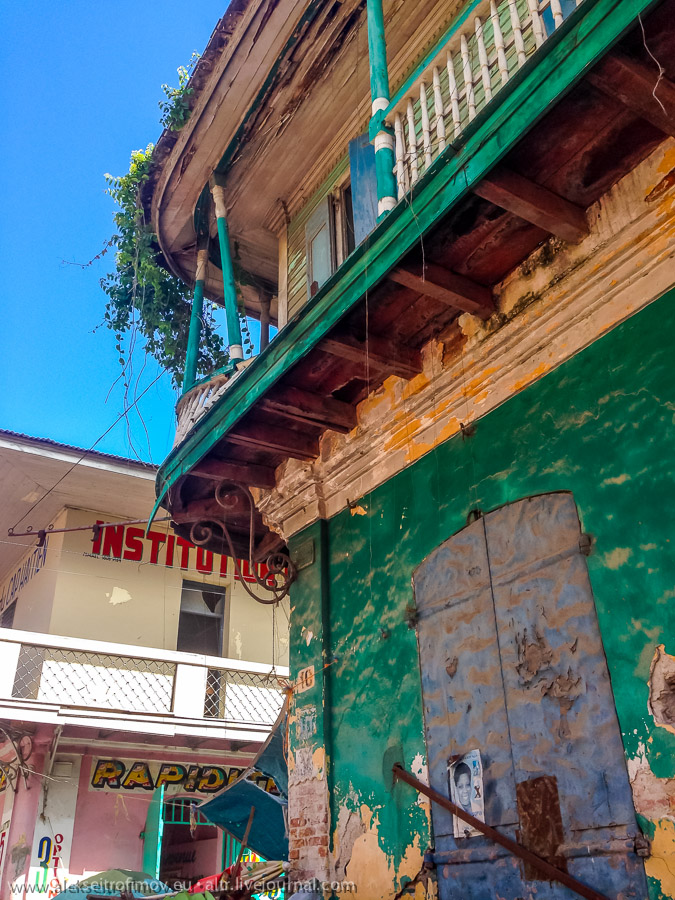 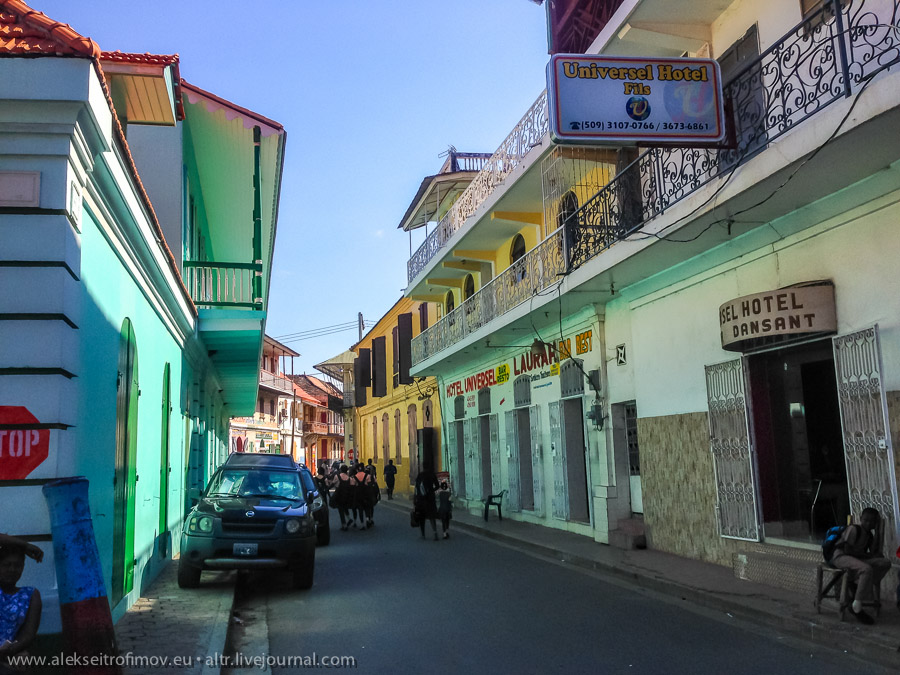 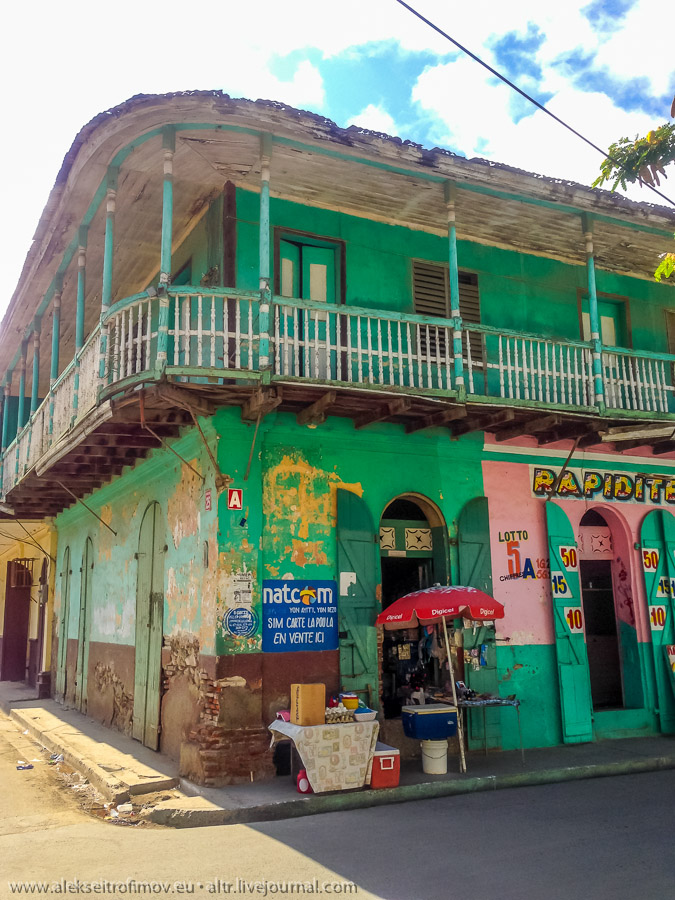 I headed first thing to a local grand market which is called Marché de Fer (Iron Market). To get there, I had to pierce the mass of humanity in narrow surrounding streets: 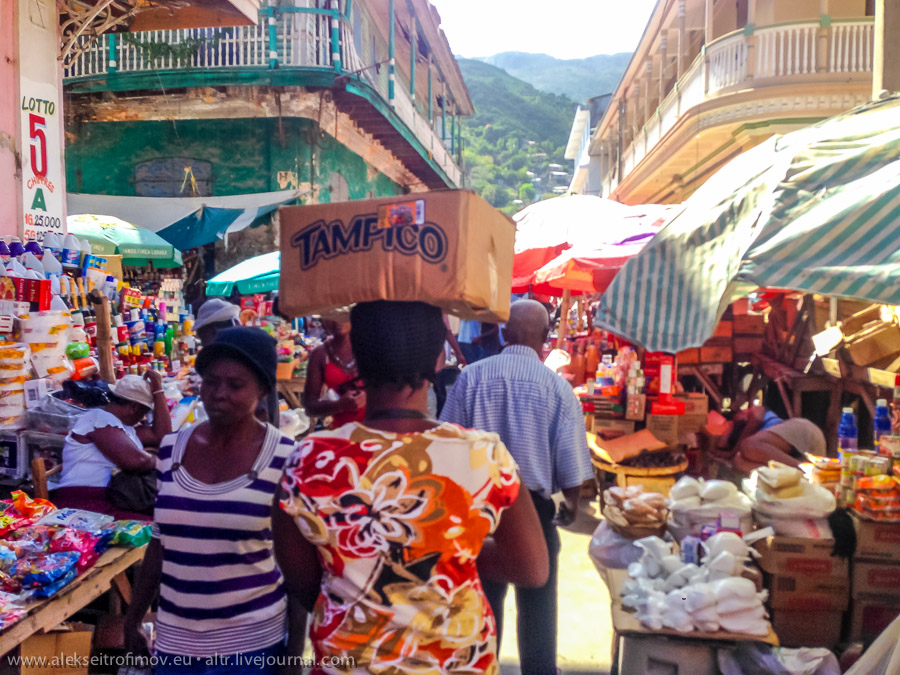 The entrance of Marché de Fer. It is called Iron Market as it’s literally built from iron – not unlike the Eiffel Tower! 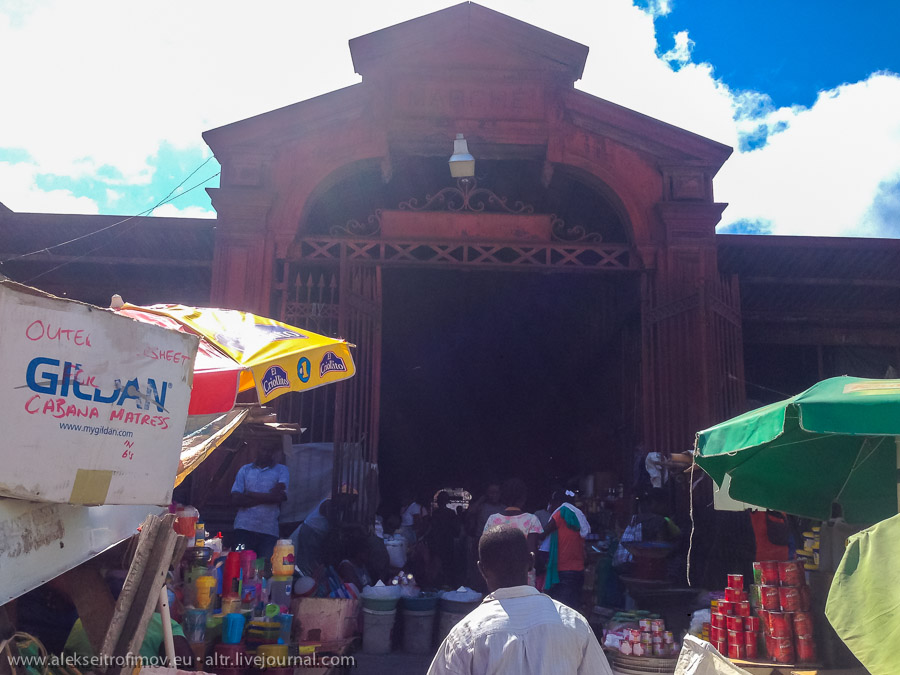 Inside the Iron Market: 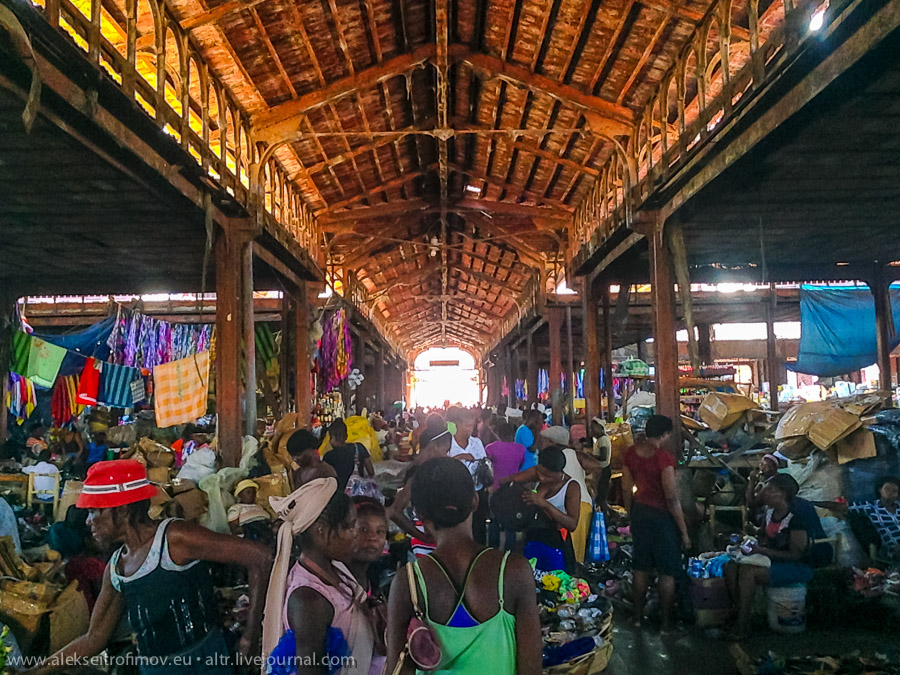 I have to say that in the Dominican Republic a white person won’t be able to walk three steps without being shouted at and asked to buy something. Nothing like that in Haiti – people look at you with some surprise, but no one actually bothers you. If you take pictures, some people turn away, but mostly people laugh and start discussing you with their neighbour. All in all, no one actually cares about you! 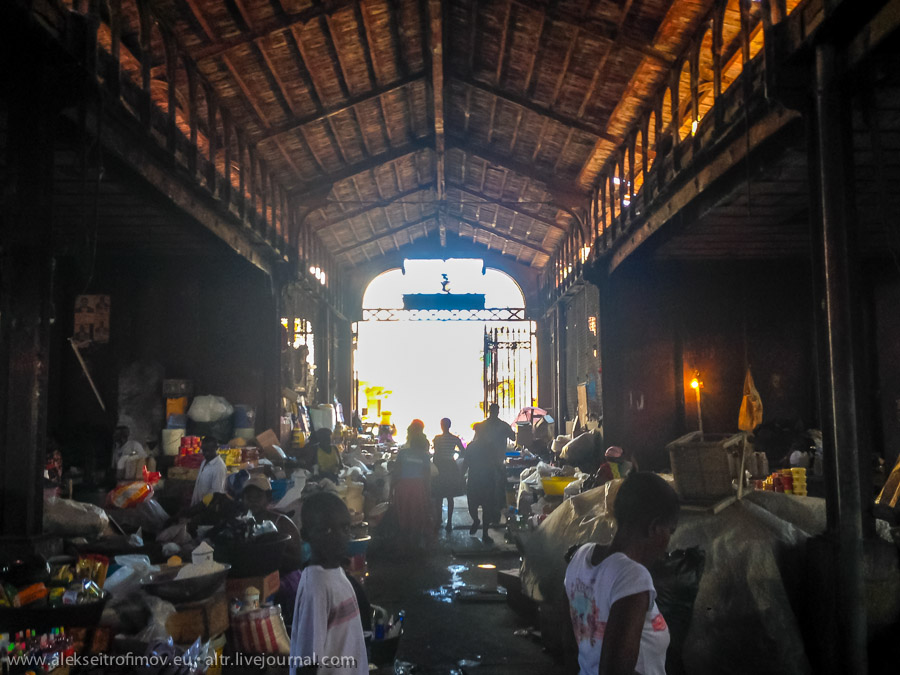 From Marché de Fer I headed towards the main square, which is just several blocks to the North. It is centred on the statue of the Haitian hero, Toussant L’Ouverture, the leader of the liberation war against the French. 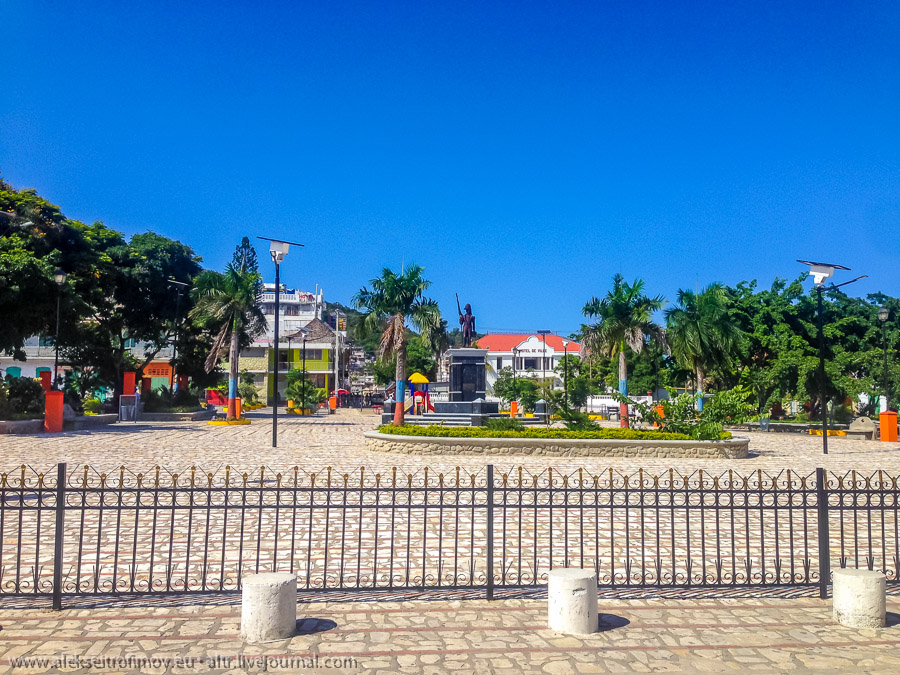 The buildings of the main square: 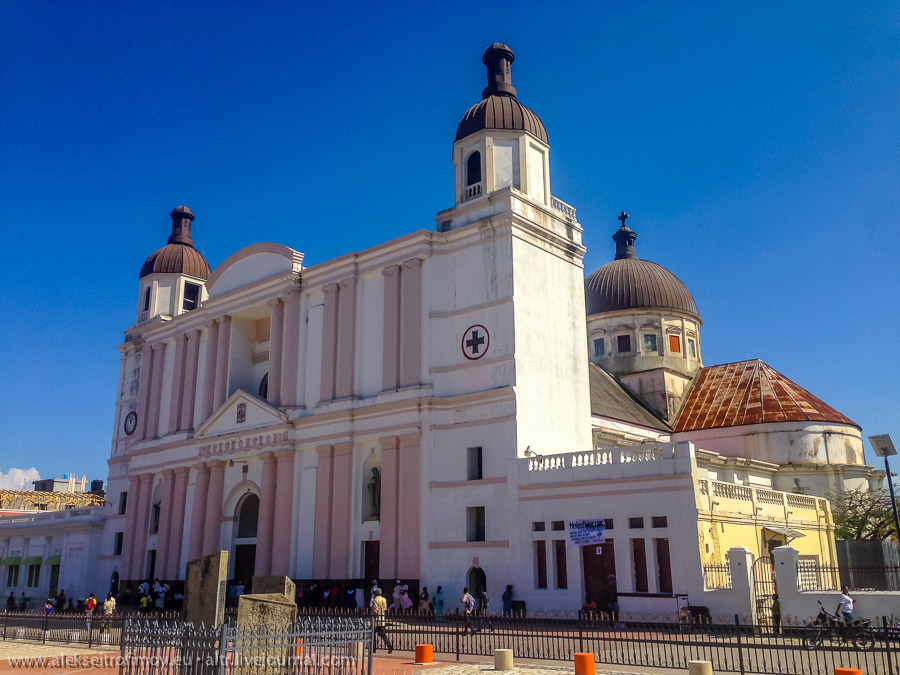 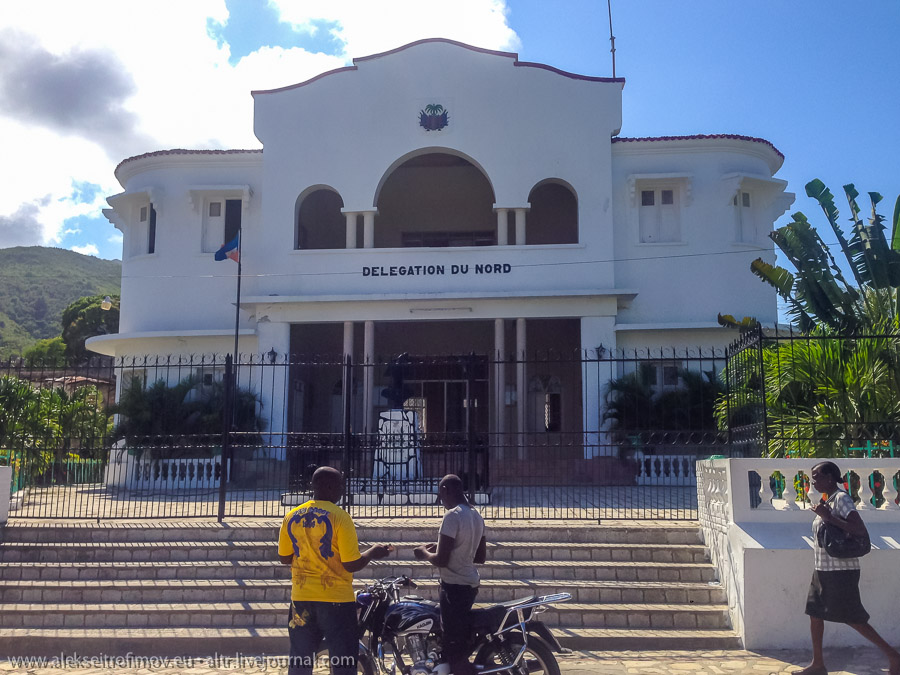 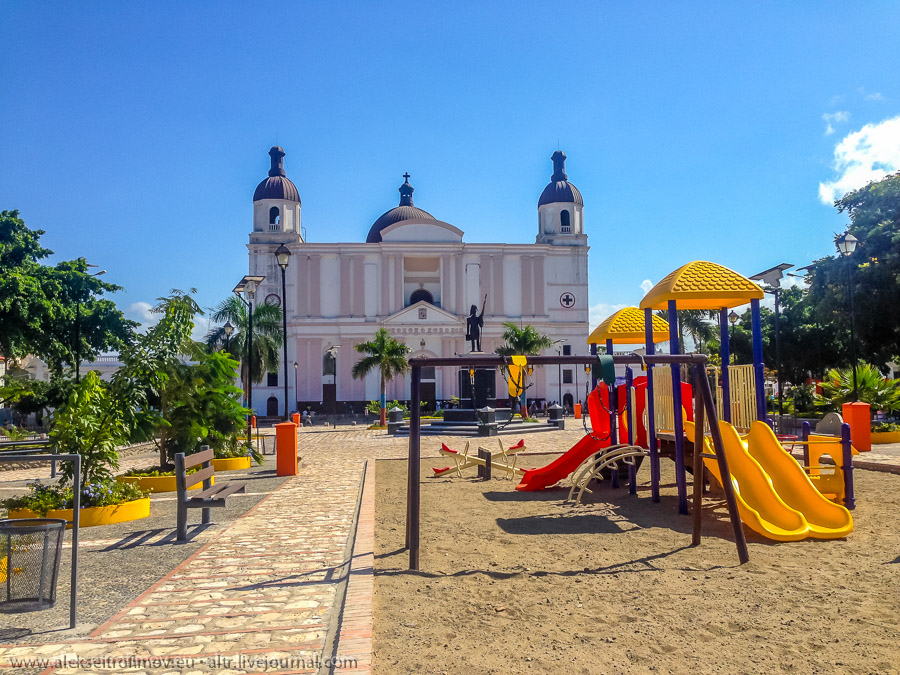 You would be forgiven to forget that Cap-Haitien lies on the ocean shore as most activity is concentrated inland. 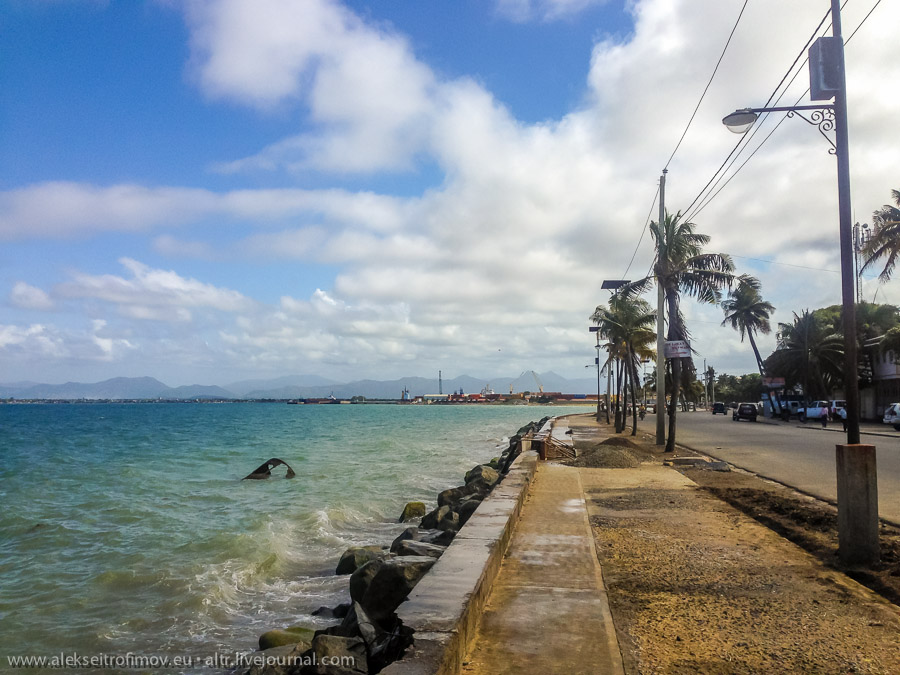 I decided to walk to Fort Picolet which lies some kilometres to the North. The road passes through deserted suburbs and eventually you arrive at this secluded beach frequented by locals. Later I discovered that the actual Fort Picolet lies way further – behind the faraway rock that you can see on this photo – and you can only reach it by walking on the rocks through the waves. 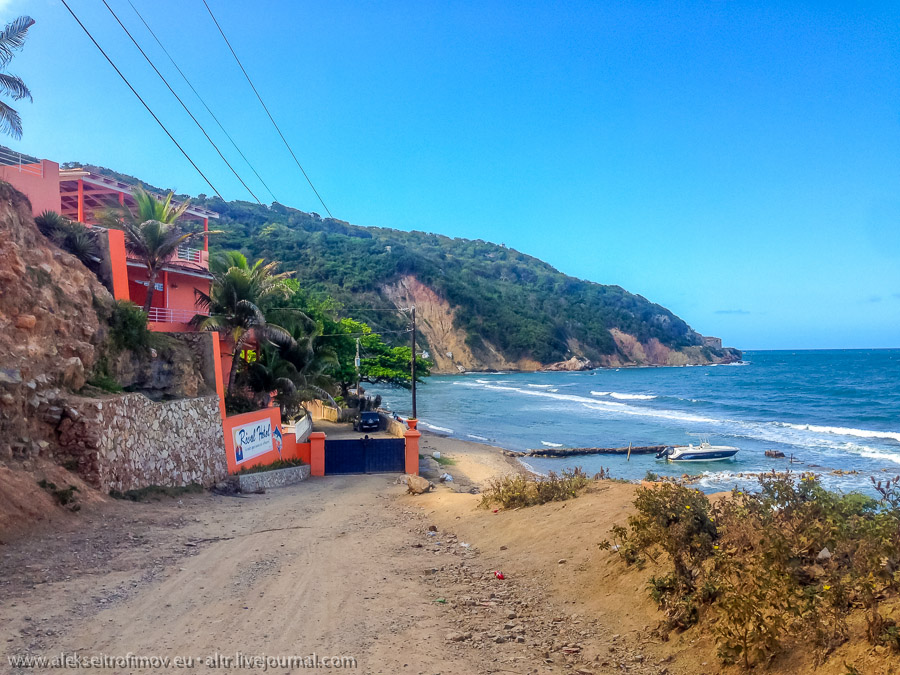 I was not ready to give up and so I walked on and on through the waves until I reached the isolated Fort. 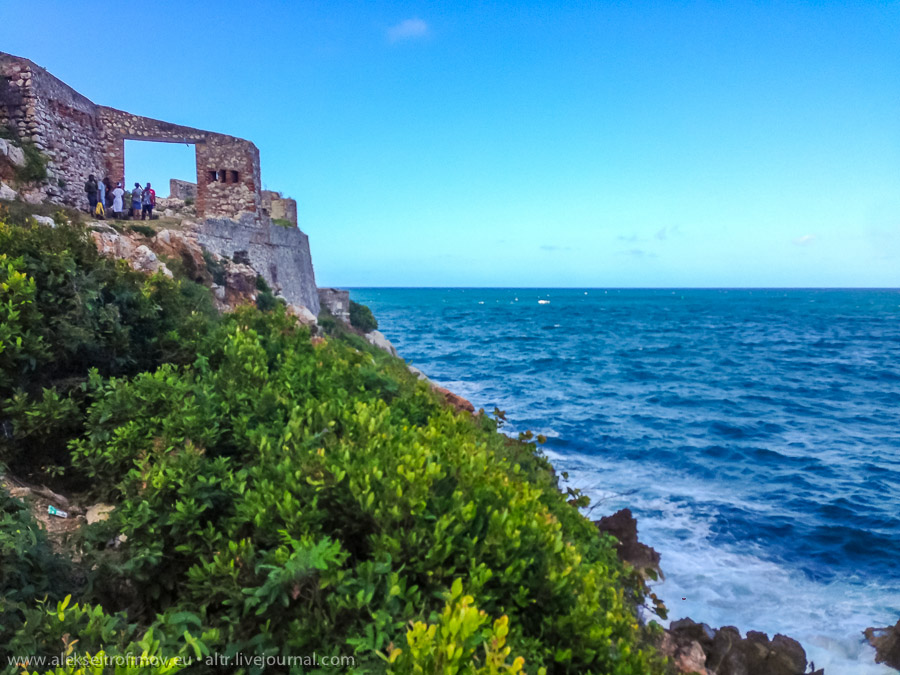 To my surprise, I realised the reason why Haitians visit it has nothing to do with tourism. It is a religious site. In a niche by the rocks there is a kind of an altar where the locals were burning candles and singing songs. 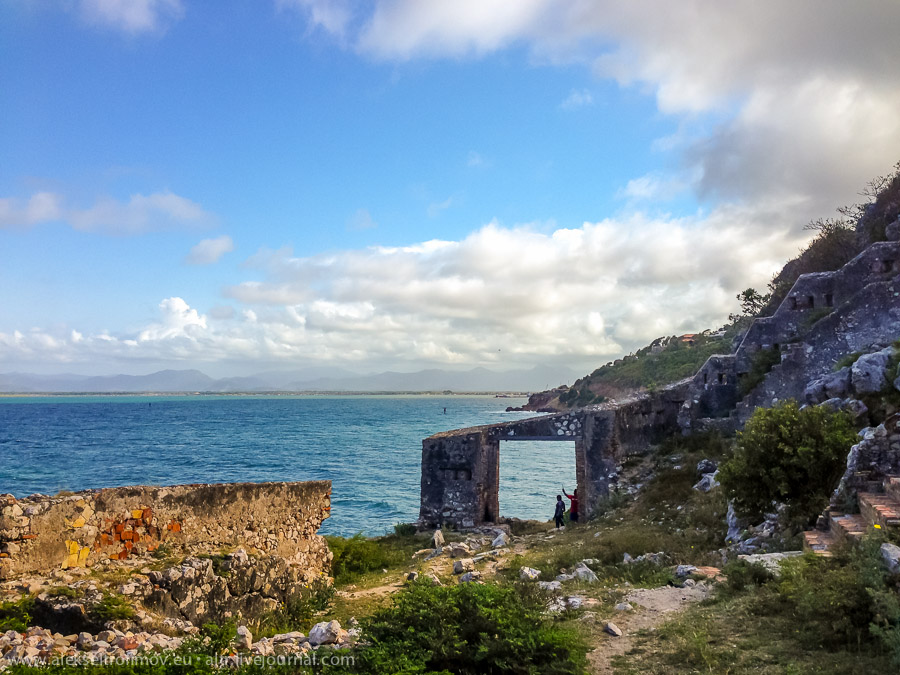 I observed the ceremony for a bit from afar and decided not to bother them too much. Walking around the Fort built many years ago by the French to defend Saint-Domingue from other Europeans was an eerie experience. 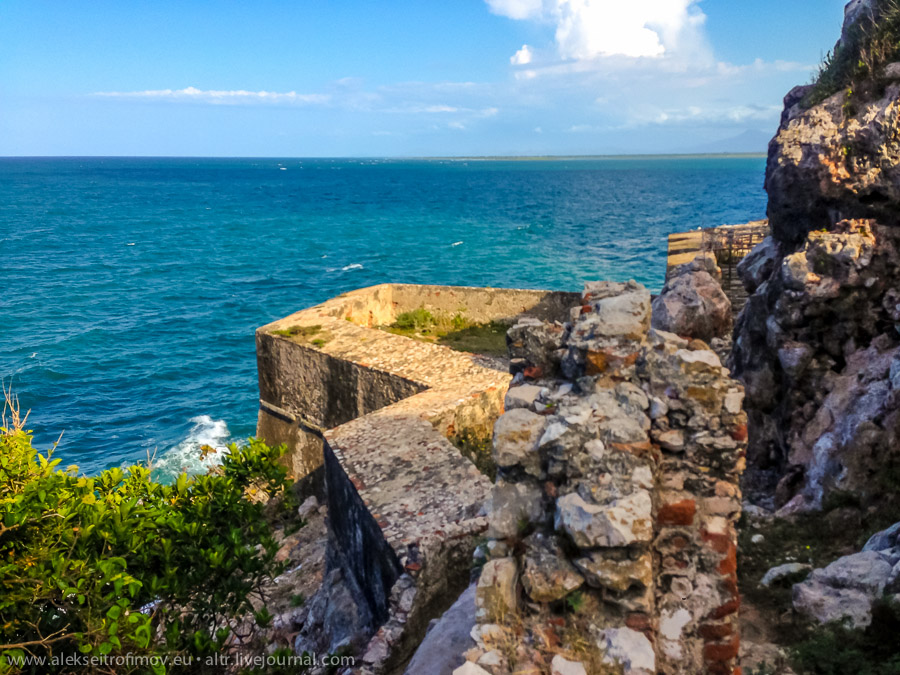 The ocean roaring below: 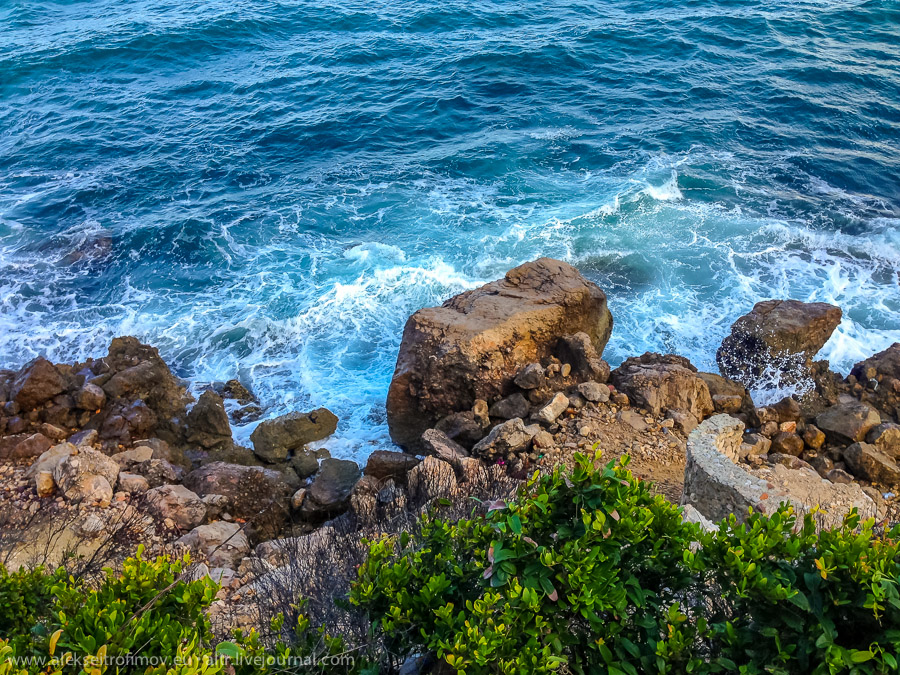 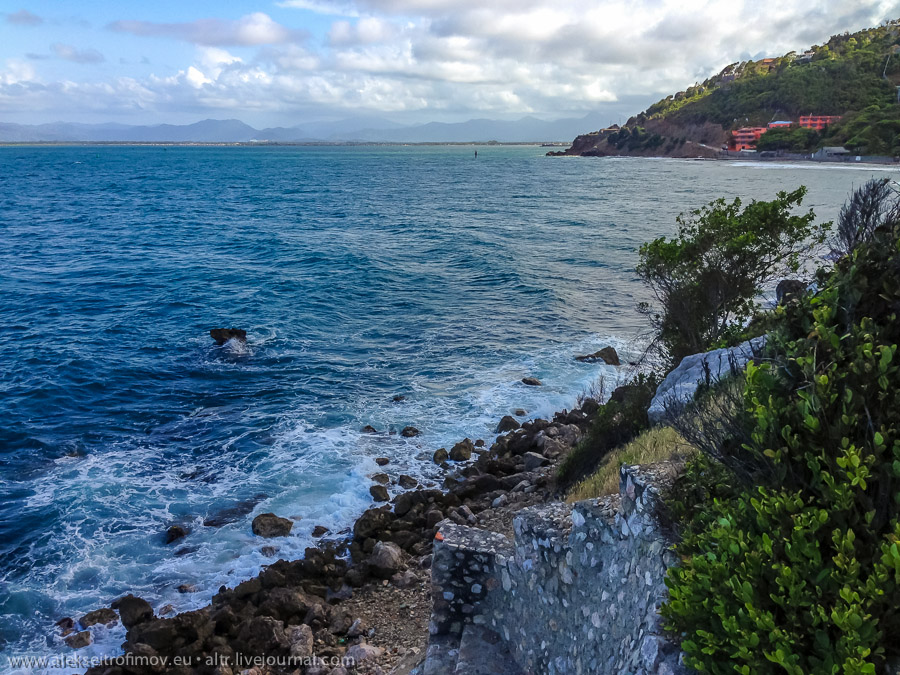 This is Haiti after all and not all is romantic waves-rocks. Actually you walk through veritable rubbish. It’s like this everywhere. 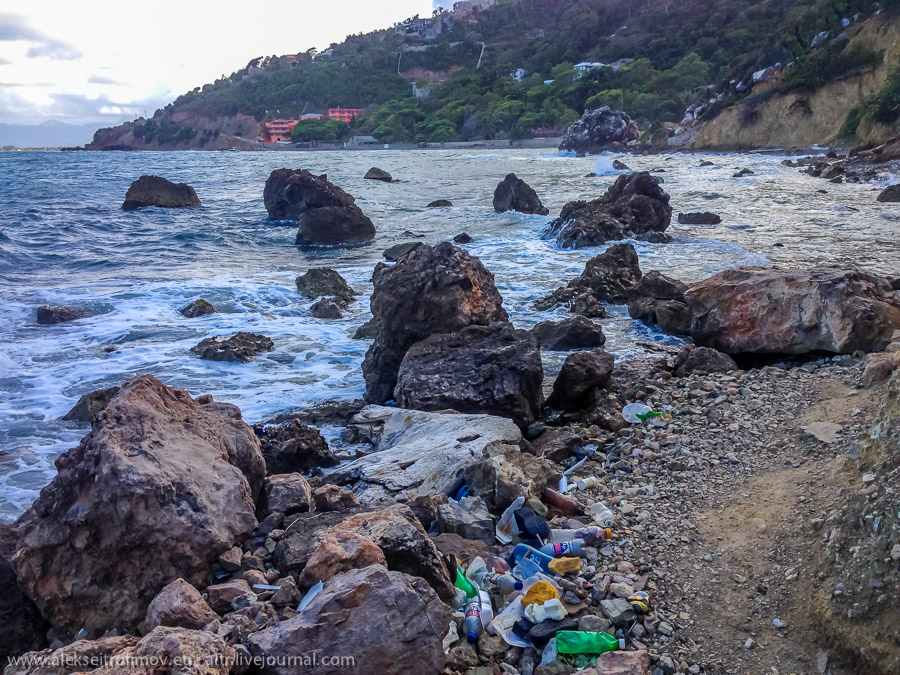 For example the stream (former river) flowing through central Cap-Haitien is a river of rubbish. 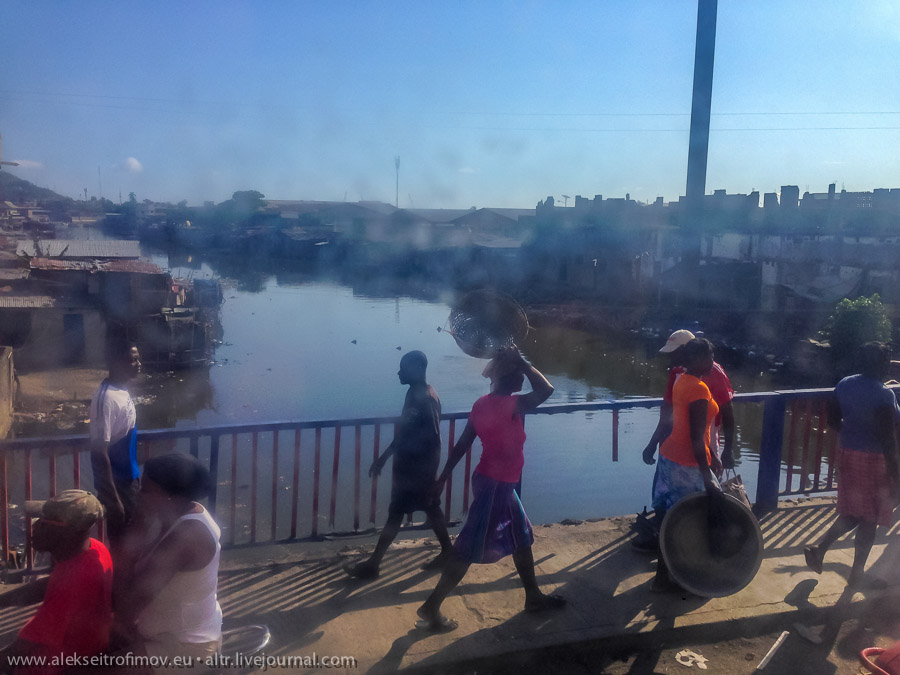 The rubbish is burnt in the very centre of Cap: 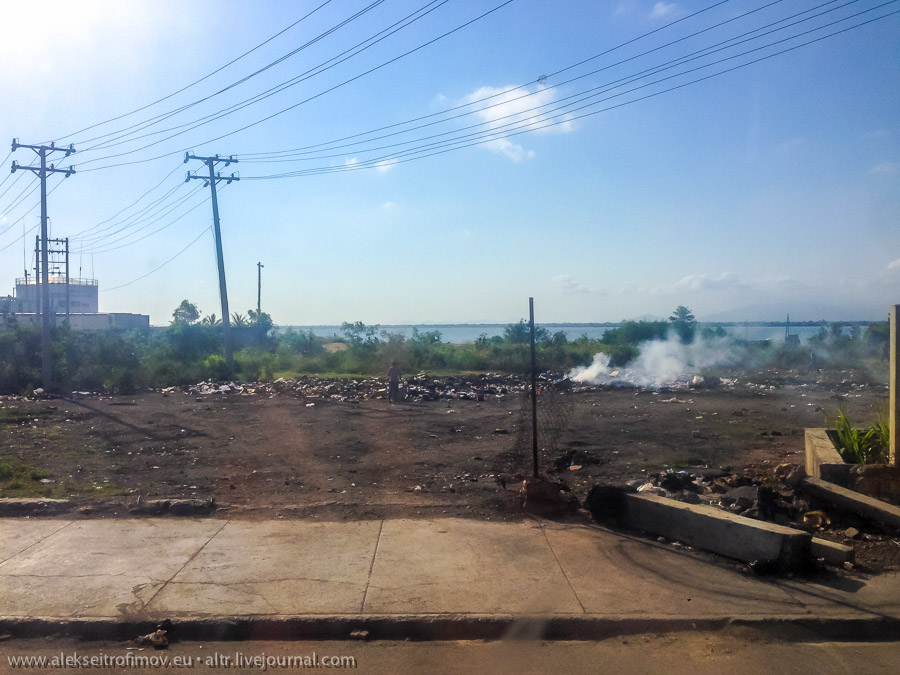 These very my impressions from Cap-Haitien. However the most important part of my Haitian program was surely the visit to the castle of the black king Henri-Christophe. Citadel Laferrière lies 20 kilometres from Cap in the isolated Haitian mountains. That’s the subject of the next post!

4 thoughts on “Cap-Haïtien, once the Paris of the Antilles, and what’s left of it”