What do we normally associate with Peru?
The Inca civilisation and its apotheosis, Machu Picchu.
Nazca lines for archeology lovers.
Politics aficionados may remember the communist rebels of Sendero Luminoso and the President Alberto Fujimori who crushed it.
There is also Lake Titicaca (although half of it is in fact in Bolivia.)
That is probably about it in the popular consciousness.

And yet probably the most bright experience of today’s Peru is altogether different. Peru is the gastronomic eldorado of South America. Its kitchen is considered the best in the continent. In Peru the gastronomic traditions of all kinds of immigrants – from Asia, Europe, Africa – have mixed democratically with the traditions and knowledge of the locals. All of these traditions together with the availability of ingedients from every thinkable climate zone – as Peru possesses jungles, mountains, deserts, ocean, rivers and everything in between – gives rise to unusual, creative dishes.

I promised myself to take a pic of every dish I eat, but have to admit the defeat of this undertaking. Seriously, every time the food came in front of me, the need to picture it got completely forgotten! I tried even to apply some NLP tricks to remember about it, but to no avail.

Still in a couple of cases I managed to make the following pics.

Cuy
Perhaps the most impressive Peruvian dish is cuy, which is roasted guinea pig. I must say I felt some pangs of consciousness before eating it at first. The waiter even asked me if I wanted to get it together with the head on the plate or without. I decided that if I commit the crime already, should go full at it – please bring the head!

Guinea pigs are very quick to reproduce and are easy to prepare, so cuy has become the national dish of the Andes. It is so popular that on the many paintings of the Last Supper by the painters of the Cuscan school cuy regularly appears in front of Jesus, along with corn and yucca. Cuy turned out to be really tasty – very tender pink meat, something between rabbit and quail. The meat also has no cholesterol, so apparently is quite healthy too. I am surprised it is not eaten more widely in other parts of the world. 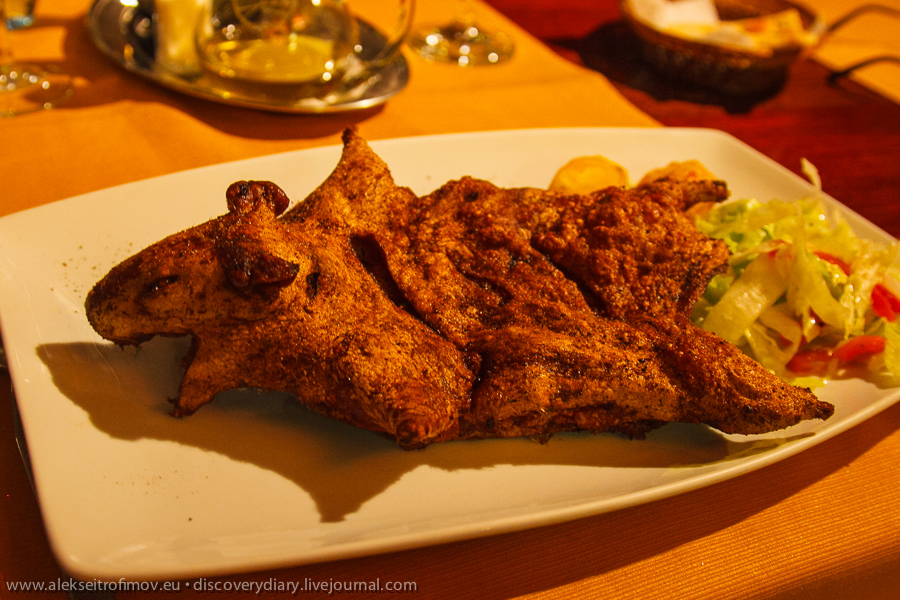 Ceviche
Ceviche is a dish that can be eaten all around the Americas, from Mexico to Chile. And yet a ceviche like in Peru cannot be found anywhere else. It is the national dish of Peru, was invented here and was already popular in the times of the Incas. The three main components of ceviche are thin cuts of camote (orange sweet potato); thinly sliced seafood marinated in lime juice, together with slices of chili, red onions, salt and pepper; and yucca or corn. The seafood that can go into ceviche can be fresh fish, oysters, shrimp, octopus or anything else really. I normally preferred ceviche mixto, to mix the different seafoods. Peruvian ceviche fiercely attacks your taste buds, overwhelms and impresses. 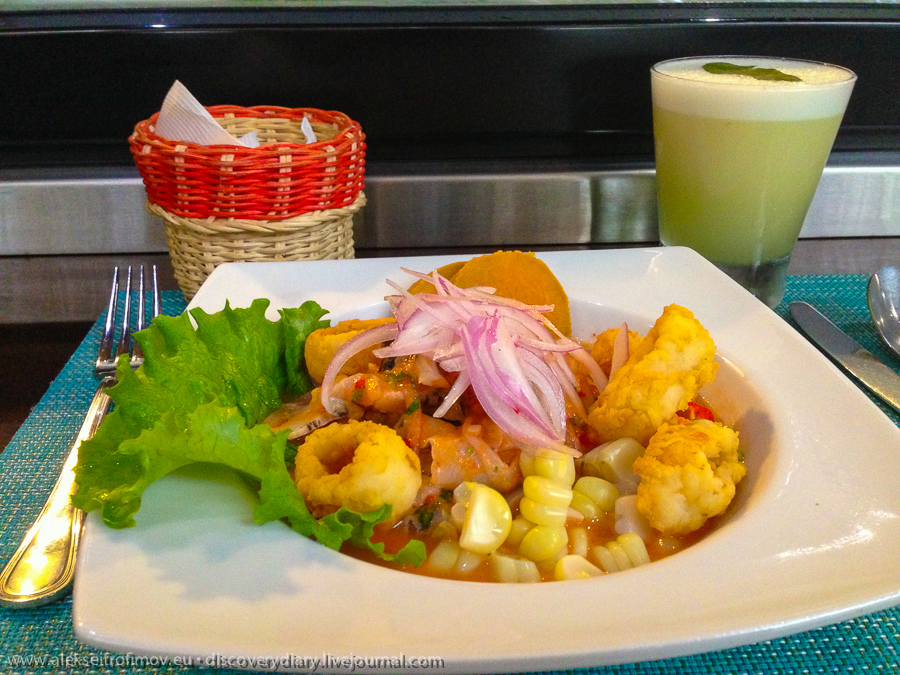 Pisco sour
On the previous pics also the famous cocktail of Peru is present. Pisco sour (pronounced even by Peruvians as in English) contains the Pisco rum of Peru, but also lime juice, syrup as well as egg white. The taste of this cocktail is unusually fresh and makes every Peruvian evening so much more fun 🙂 To be very precise, the drink in the image is a variation of pisco sour called coca sour. Instead of lime juice it has a coca leaves extract. The classic pisco sour instead of a coca leaf on top will have a small spot of coffee colour – this is a drop of a herb infusion Angostura.

Alpaca a la parilla
Apart from guinea pig, the main sources of meat are alpacas and llamas. The meat of alpaca is very tender, reminds of veal in texture and colour and taste. The llama meat has a harsher taste, more reminiscent of lamb. Alpaca in Peru is served in a wonderful manner: it is brought out on a sizzling hot volcanic stone, so that you can achieve the preferred degree of finishing yourself. I always eat my meat rare, so did not make so much use of the hot stone, but still it is very impressive. Sorry for a slightly blurred image – my hands were trembling impatiently 🙂 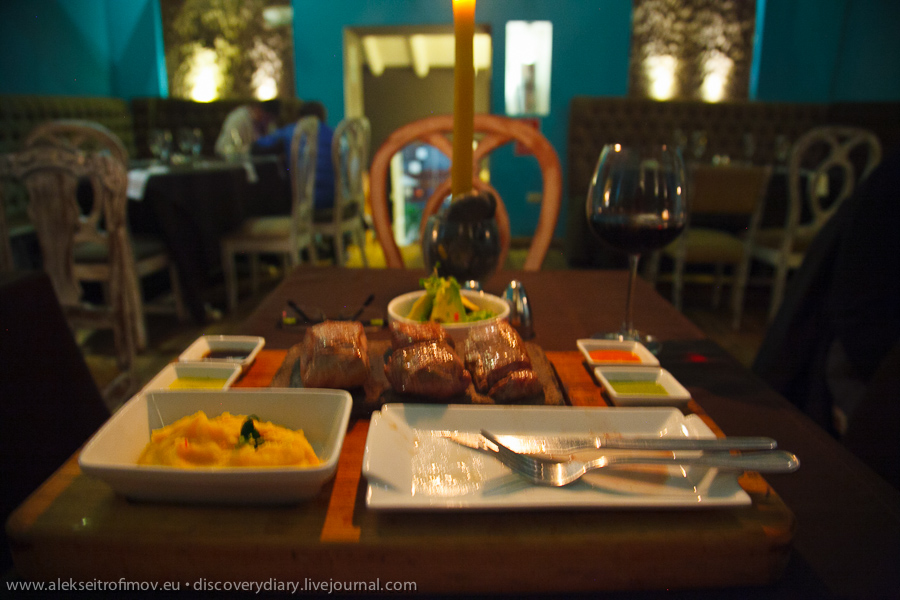 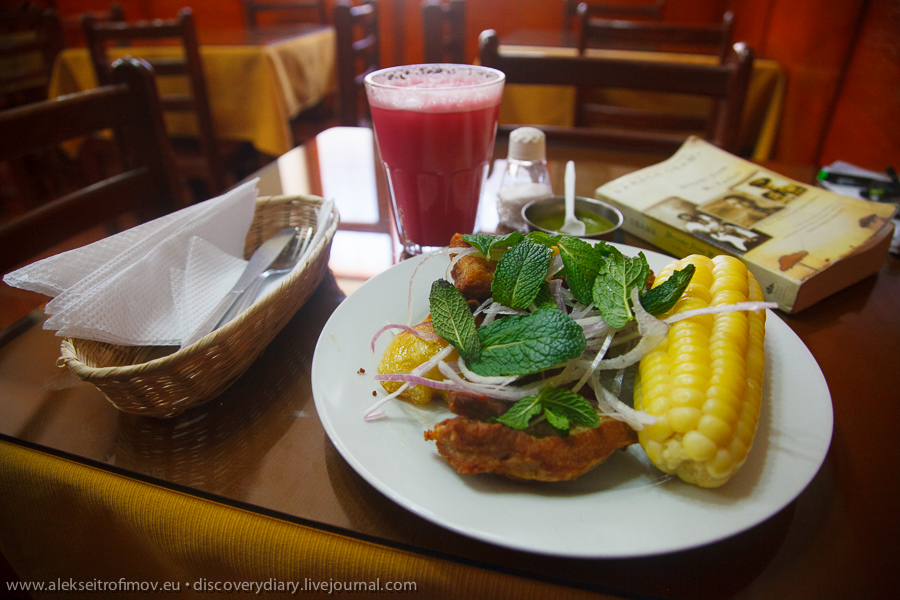 Chicha morada
The drink in the previous picture is chicha morada. Chicha has infinite number of variations in Peru, and is drunk everywhere and by everyone. In this case chicha morada is alcoholic, reminds of a light fruit beer.

Anticuchos
Another less healthy dish is anticuchos, marinated and grilled veal hearts. They are often prepared and sold right on the street. This is a restaurant variety though (also yummy!) 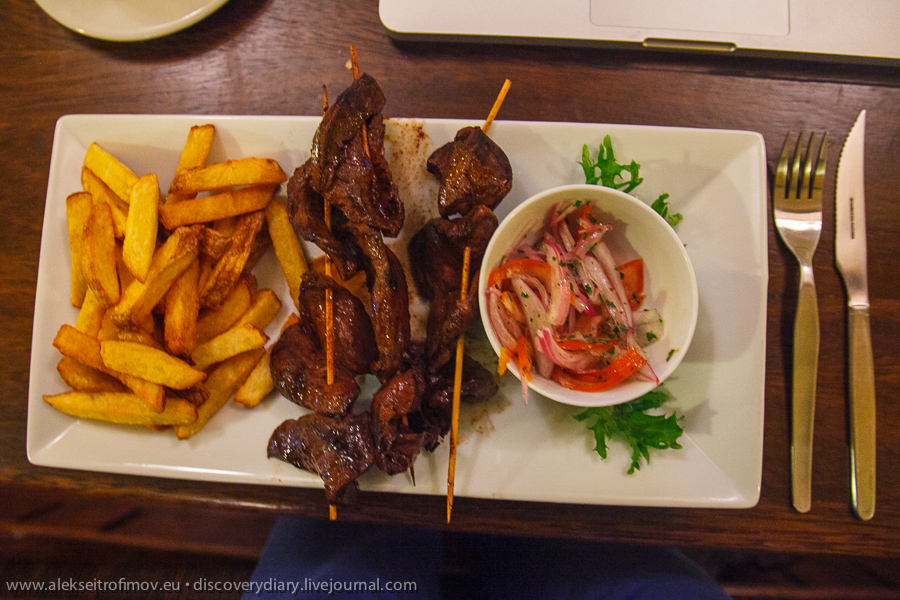 Sopa criolla
Sopa criolla, which I got to try in Arequipa, is prepared from tomato pasta, minced meat, milk, oregano, and its main ingredient which gives the characteristic colour – yellow pepper aji panca. Here it is served together with non-alcoholic chicha and wonderful Chilean wine 😉 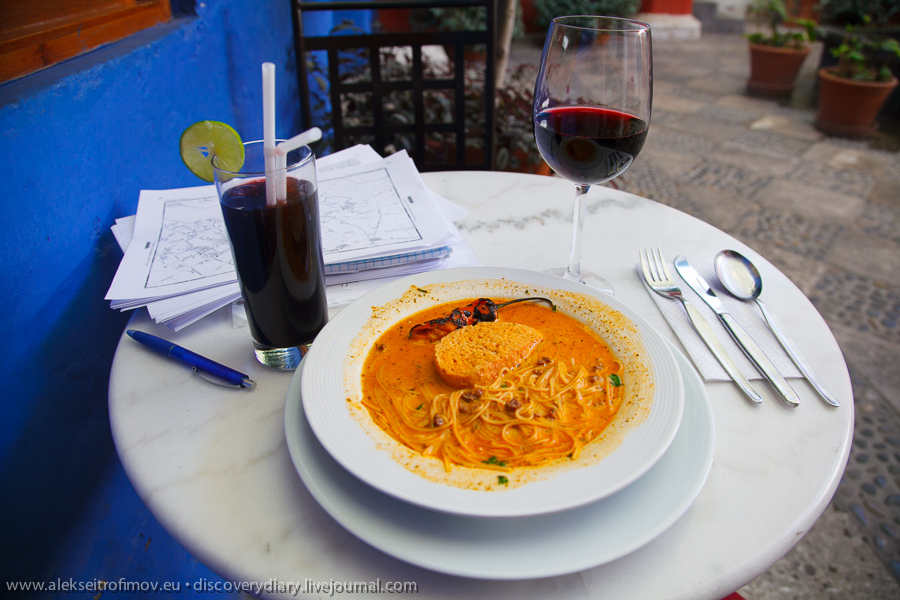 Sopa de quinoa
I cannot omit another soup, which is a part of almost every dinner in Peru – the quinoa and vegetables soup. Quinoa is of course one of a number of important Peruvian contributions to the world cuisine, along with potatoes, tomatoes, and chili peppers. There are about 3500 sorts of potatoes in Peru, most of which are not grown anywhere else. Potatoes here come in every form and colour – oblong like carrots, round, oval, red, yellow, orange, green. I spent one night with a local family on Amantaní island, which I will describe later, and the lunch we got consisted of 4 sorts of potatoes and some fried cheese. Apart from the cheese, this is the normal lunch on this island.

Mate de coca
Mate de coca (tea from the coca leaves) is drunk everywhere in Peru. It is particularly useful at an altitude as it stimulates the production of red cells in blood. Everybody loves explaining here that coca leaves contain 16 different alcoloids, of which cocaine is only one. To get 1 gram of cocain, 16 kg of coca leaves have to be processed, thus there is no reason to see coca leaves as a drug. And yet it is strictly forbidden to bring them to most countries outside of Latin America. I was suprised to learn that Coca Cola is still produced from the extract of coca leaves, it has a special license to bring a limited amount of the leaves into the United States (about 100 tons per year). Although apparently cocaine is chemically removed from there anyway, despite its infinitesimal concentration. This was not done before 1940-s though. They say that even the red-white colour combination of Coca Cola is derived from the colours of the Peruvian flag, as most coca leaves were initially imported from Peru.

In Cusco, Puno and La Paz there are Coca Museums. There it is explained in great detail the history, use and chemical consistence of coca leaves. Also all kinds of coca leaf products are sold. Some got tried! 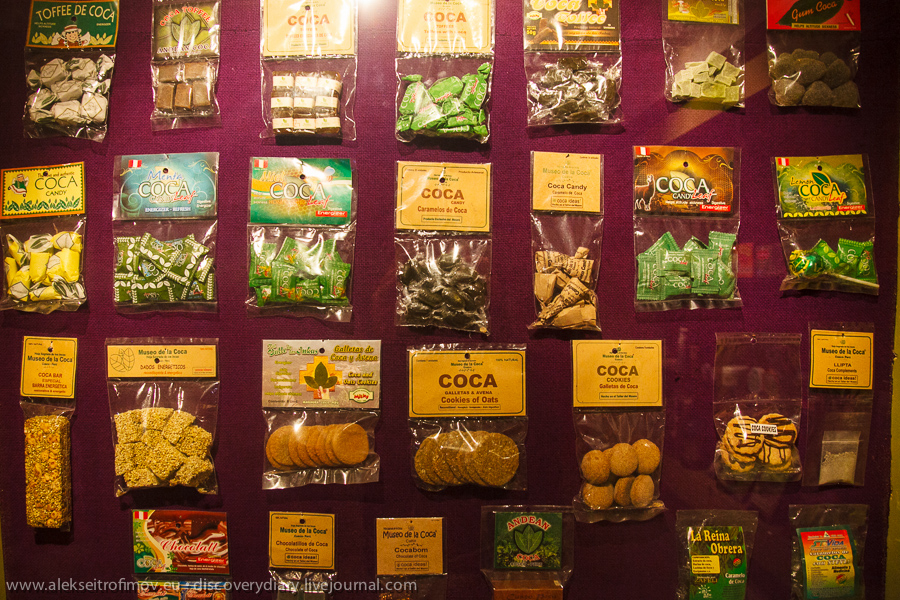 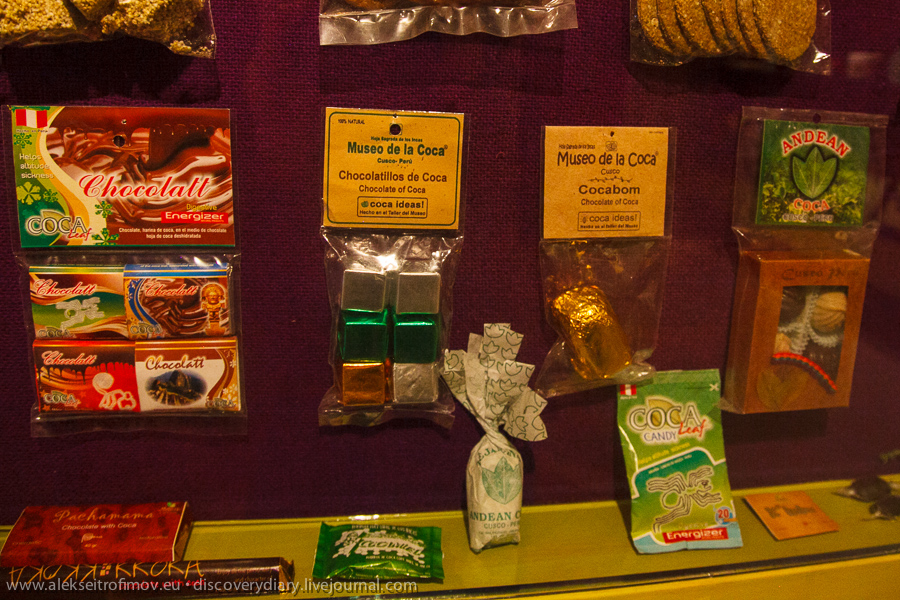 Cusco also possesses a fascinating Museum of Sacred Herbs. Along with coca, there are products from maca – another interesting plants with a number of effects, including aphrodisiac. Pictured in my hotel. 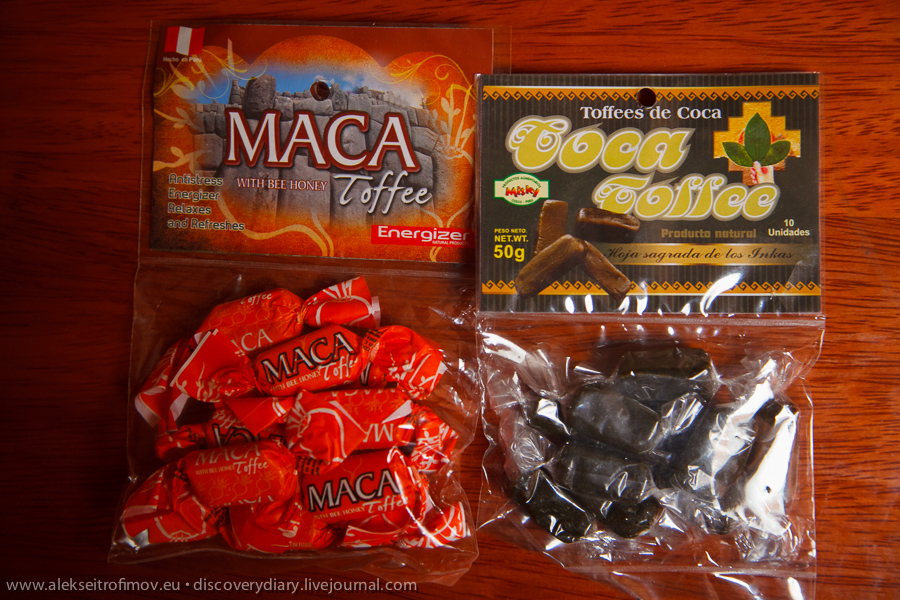 The Museum of Sacred Herbs also has an exposition on ayahuasca and san pedro cactus. Ayahuasca deserves a separate discussion. It is a hallucinogenic plant from which the shamans in the Amazon prepare a special extract. Its impact is so strong that before trying it one is supposed to fast from 2 to 4 weeks – eating only plant food, not having sex and not drinking alcohol. The ayahuasca experience lasts about 3 days, during which the person is in a special state of consciousness. The shaman leads you through it by playing special music, selected for a particular person. This is serious stuff. In Cusco they offer an express experience of ayahuasca, where the tourist can go to a special refuge and try it with a shaman, needing only 3 or even 1 day for this. But I was told that this is a dangerous and fake experience. Apparently the proper shaman has to first determine if you even need the ayahuasca experience. I decided I did not need it.

In Brazilian jungles there are even particular religious movement built around the ayahuasca experience. Most famous of them is Santo Daime church. Below is a stand of ritual object used in hallucinogenic rituals. 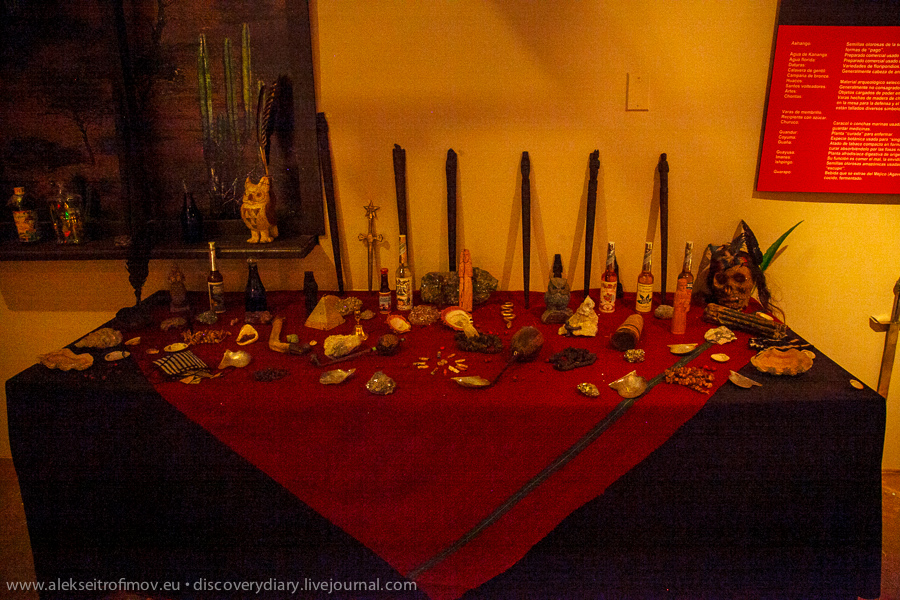 One thought on “Peruvian food”