I had some reservations about visiting Manila, as I had heard a few rather unfavourable accounts about stays there. A friend for example shared a story about how the police arrested him just for standing in a dark alley and accused of buying drugs in order to extort a bribe. And yet contrary to Jakarta, Manila did not appear all that frightening, quite the opposite, I felt really comfortable there. The five days I’d spent there even seemed too little to fully appreciate the capital and for sure the Philippines overall. To be sure, you do get shocked by the poverty and the squalid conditions, and especially by the contrast between luxurious supermarkets and filthy streets where children sleep right on the ground. I started my tour of Manila from Intramuros, which is the old city ringed by the city walls built by the Spanish in the old colonial times.

The Southern gate of Intramuros. The walls are obviously quite impressive, practically stone-covered mountains. 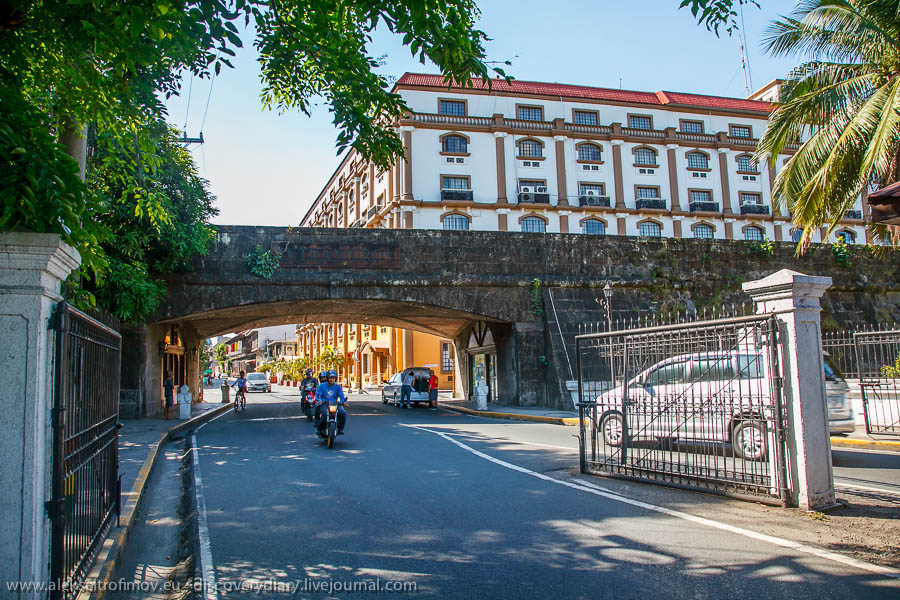 The historical church of San Agustin: 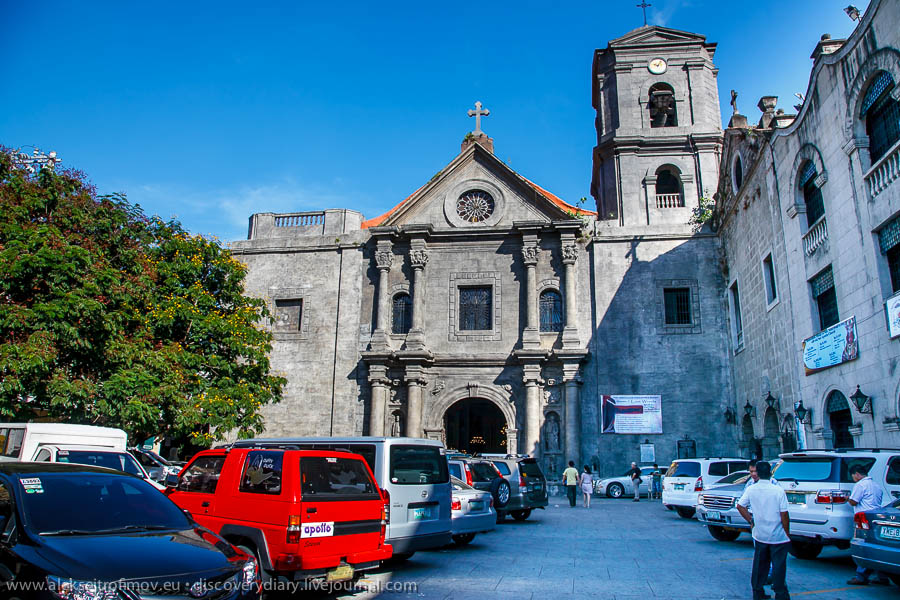 A wedding ceremony was taking place inside the church. The Filipinos are very religious, the Catholic churches I visited were always full of people. 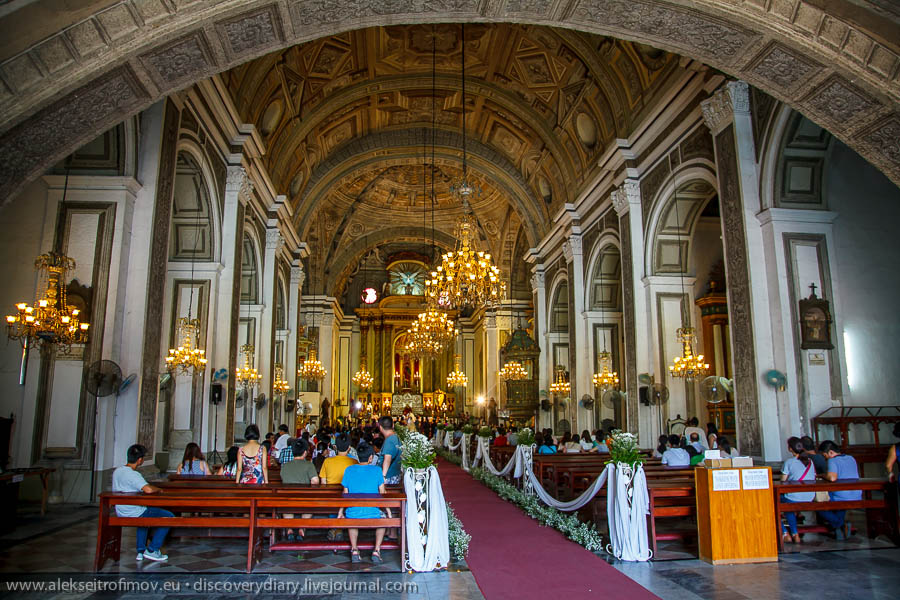 Casa Manila is another atmospheric place meant to remind of Manila’s past. Prosperous merchants’ apartments as they looked in 17th and 18th, it is meticulously researched and recreated using the period furniture. 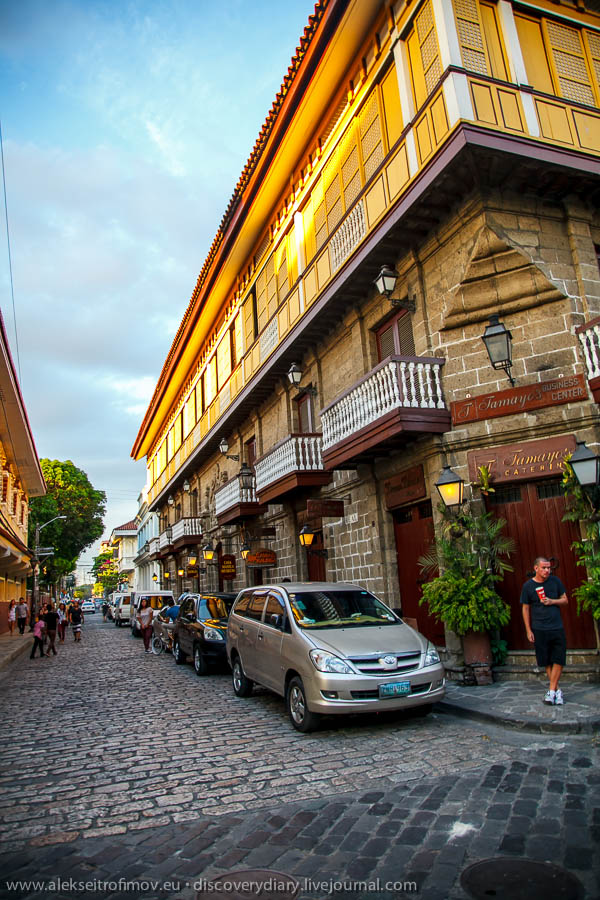 No pictures inside, but this is the internal courtyard. The apartment is on the upper floors. As is Filipinos’ wont, a fiesta was being organised. As always. 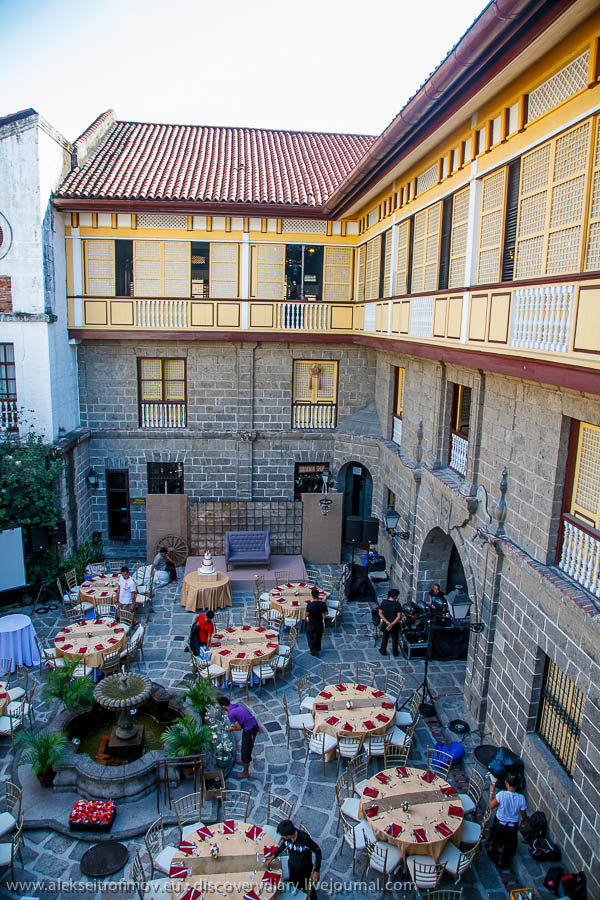 The entrance of the fort itself. The fort occupies the North of Intramuros and is separated from the rest of the old city by a ditch and a thick wall. The headquarters of various armies used to be located here: first the Spanish colonial army, the the American army when the Philippines were under US control, then the Japanese during WWII. 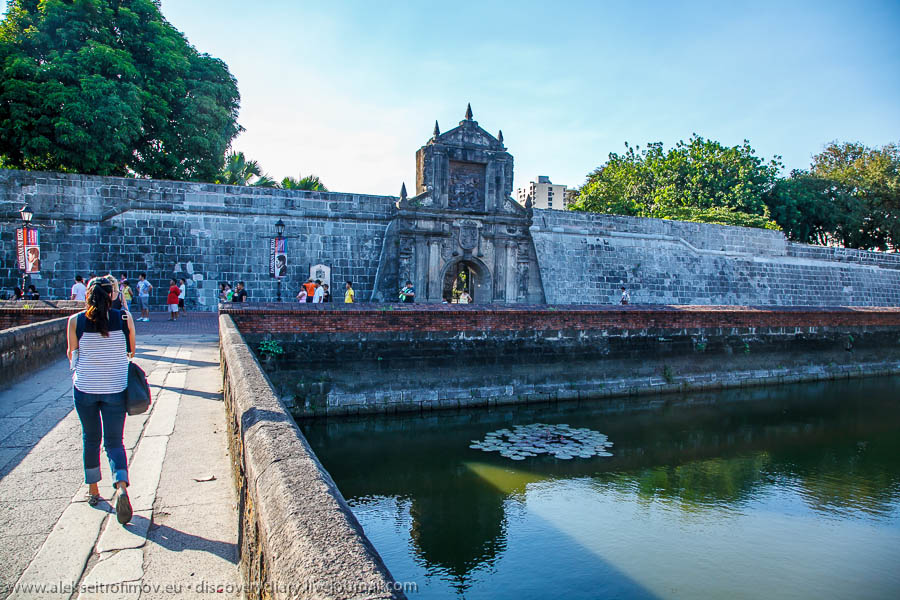 A traditional dance performance in an open air café by the entrance of the fort. 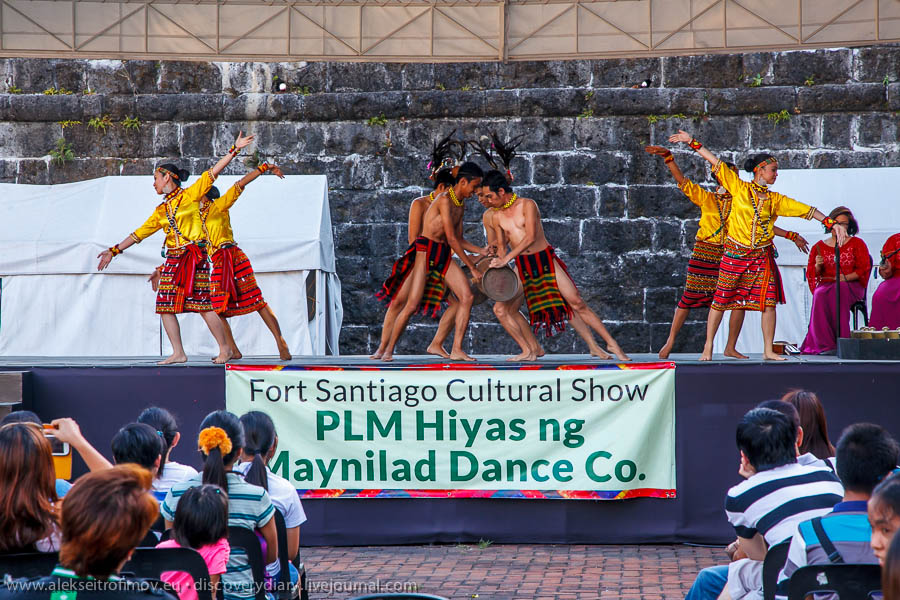 The internal courtyard of the fort of Intramuros. 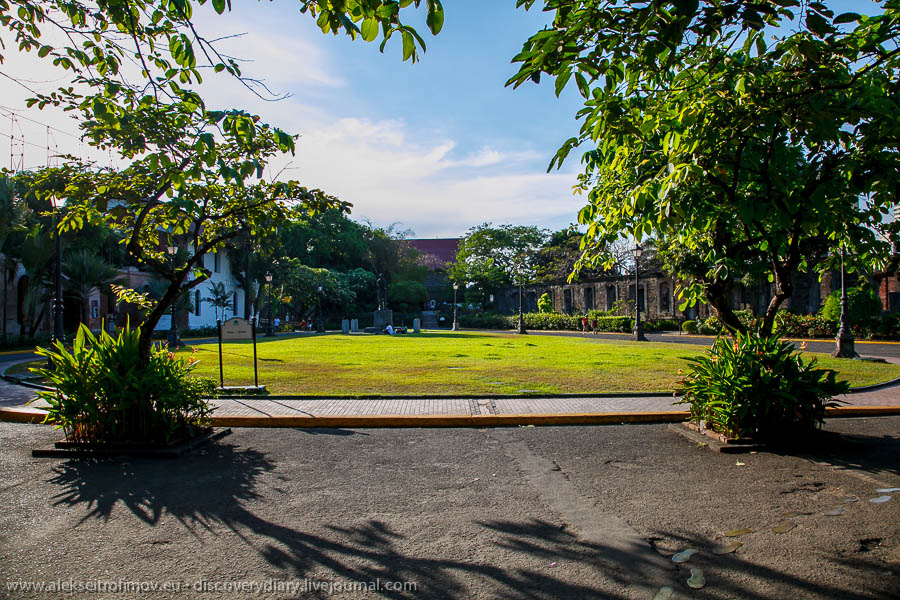 Nowadays everything inside the fort is focused on the story of Rizal, the national hero of the Philippines. Rizal is somewhat of a paradoxical figure. He was a writer and an intellectual who lay the grounds for the Philippine national identity and called to get rid of the Spanish colonial yoke. But when the Spanish arrested him and accused him of treason – of fomenting a rebellion against their rule – Rizal somehow categorically denied his guilt. The Spanish executed him anyway, which was oil to the fire of the rebellion, the rebellion which eventually led to the expulsion of the colonisers. The exposition in Rizal Museum is built on the idea of his innocence and victimhood. But if you think about it, there is an obvious contradiction built in there – if Rizal is innocent, who did he call for rebellion in his books? If he indeed called for rebellion – which is a treason against Spain – then why did he deny his guilt? The Spanish accusations were actually right then? But we are talking about the Philippines. Cold logic is not always king here. Emotions hold a much strong sway. The emotional truth of what happened here is pretty obvious – Rizal was a hero who died for independence. 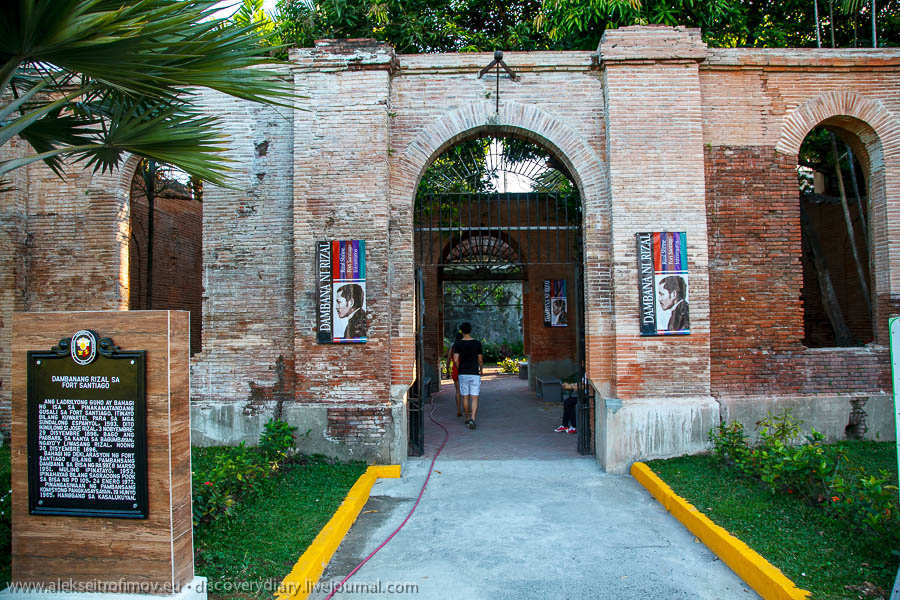 The immediate entrance of Rizal museum right after the gate on the previous photo. 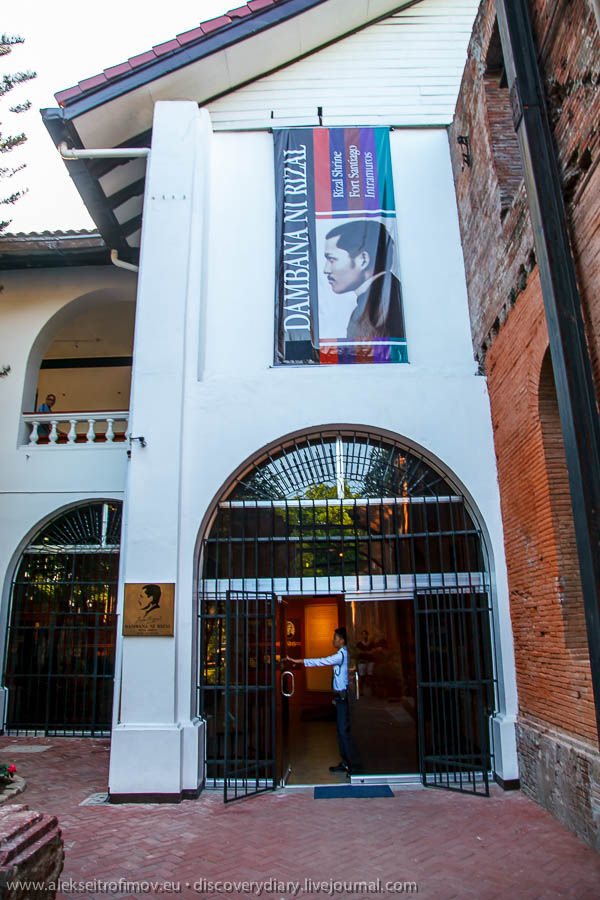 His most famous poem, written the night before his execution. In the poem he speaks of his love for his motherland. The irony is that the poem was written in Spanish – the cultural language of the Philippines at the time – but today most Filipinos cannot understand it in the original language. 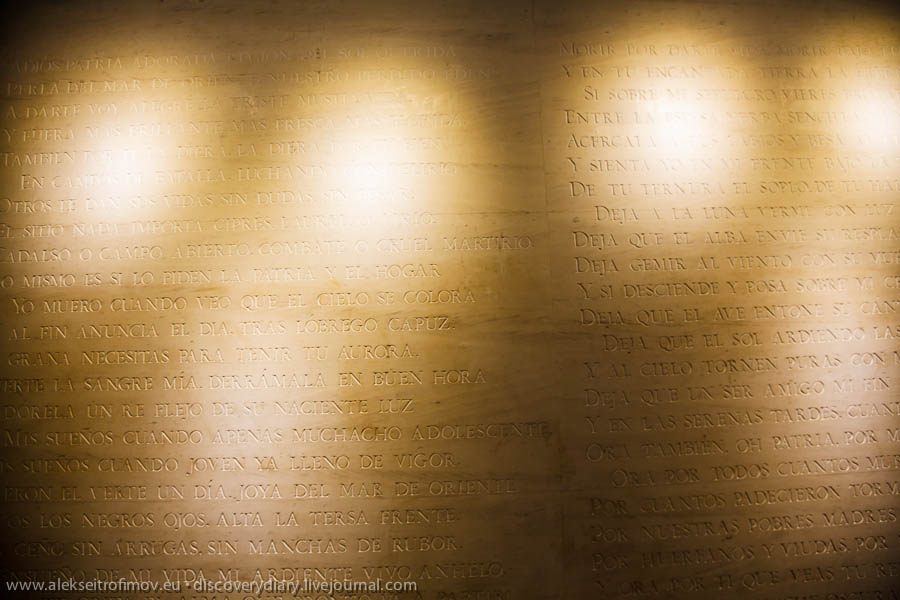 You get to take a picture with Rizal and his supporters. A jacket and a hat are included to look more in style. Rizal is standing next to me. The height of the protagonists is accurate. Not very different from the height of the modern Filipinos though. 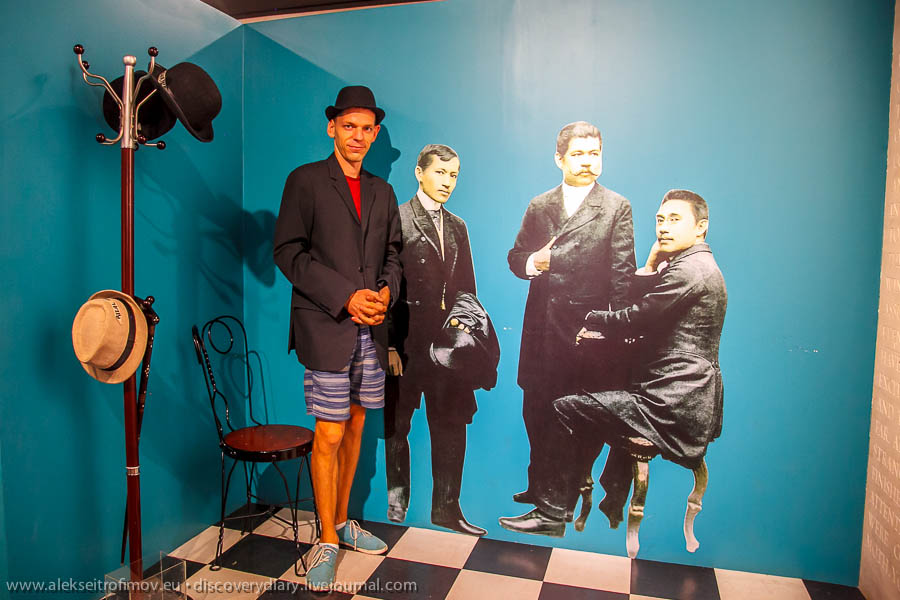 On my way back to Malate I crossed the old city. This is the main Cathedral. It was destroyed during an earthquake, the current building is a bland concrete successor of the old splendour. 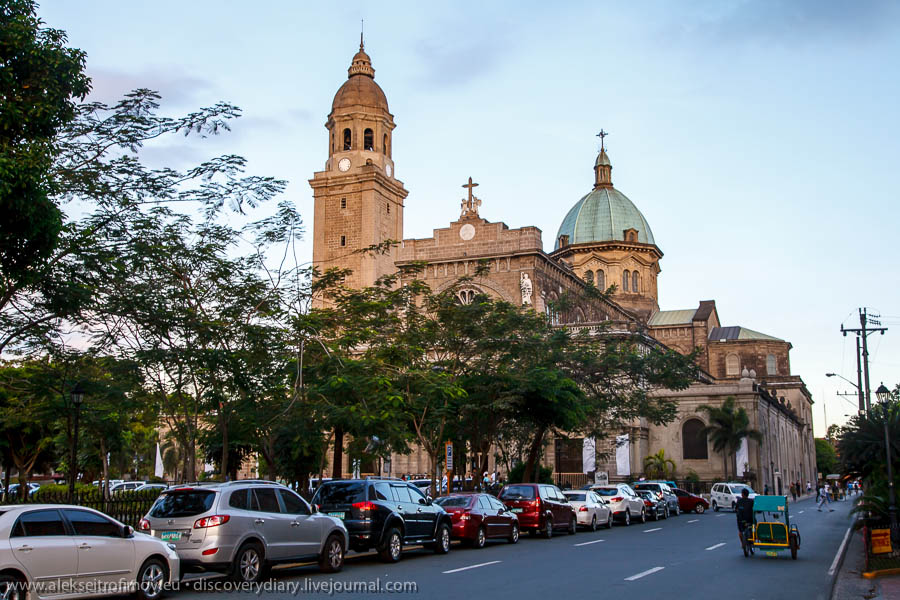 As usual, a Filipino street party was taking place. It was Sunday after all! 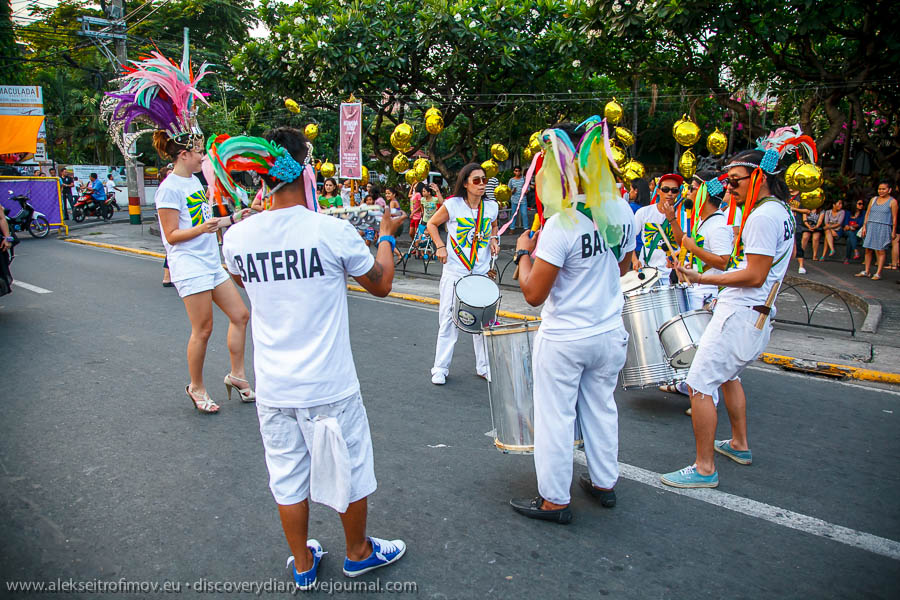 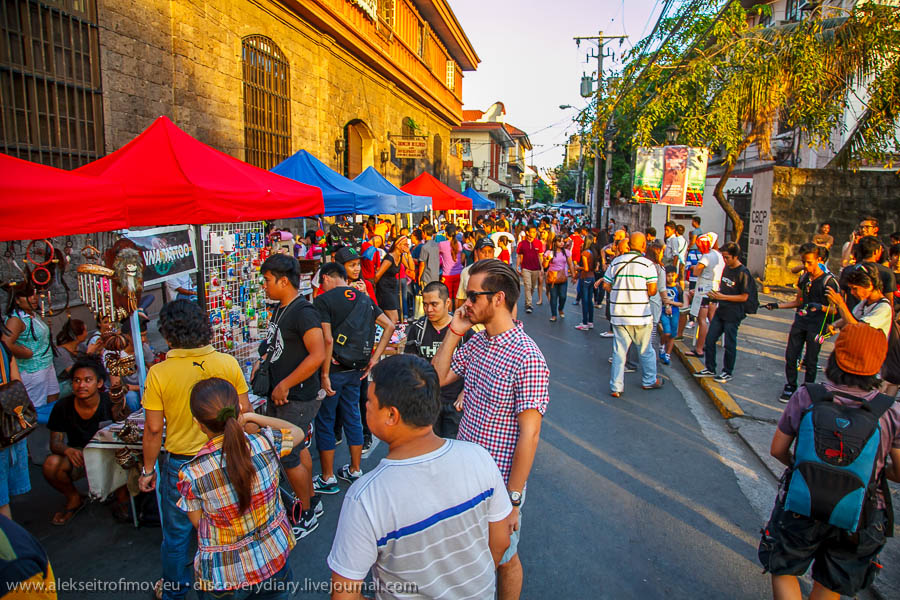 The main park of Manila is to the South of Intramuros, separating it from Malate. 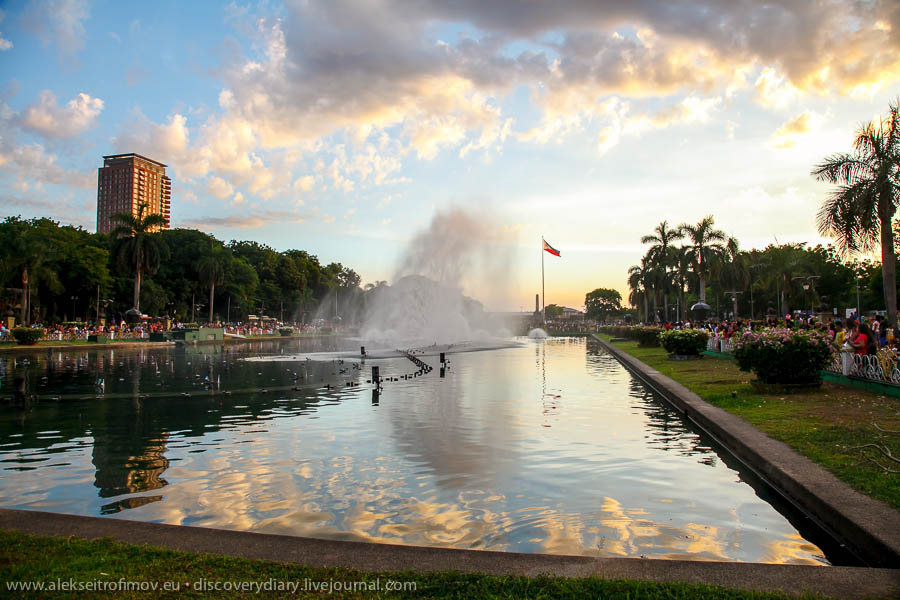 Whose monument is the focus of the park? Rizal, obviously. 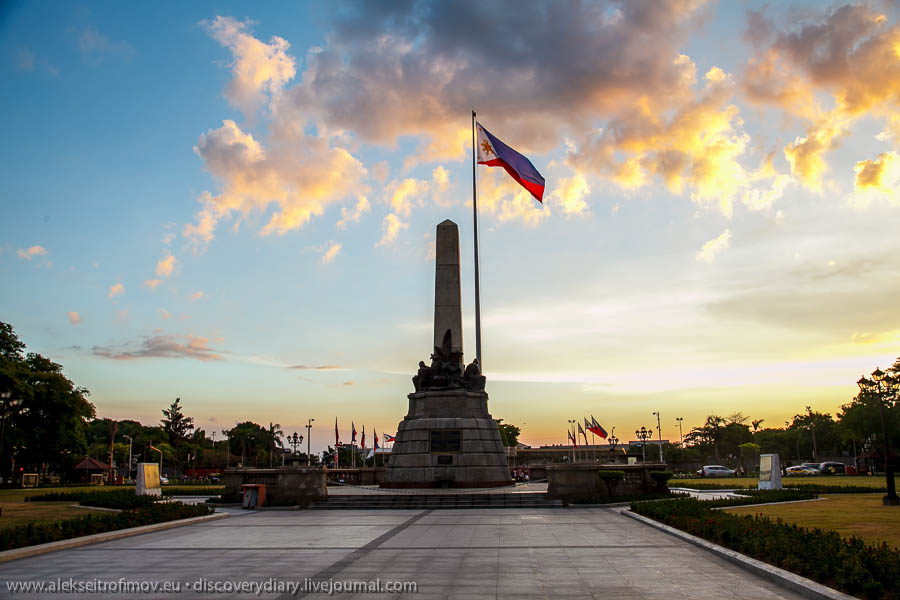 The park features a number of attractions for the people. 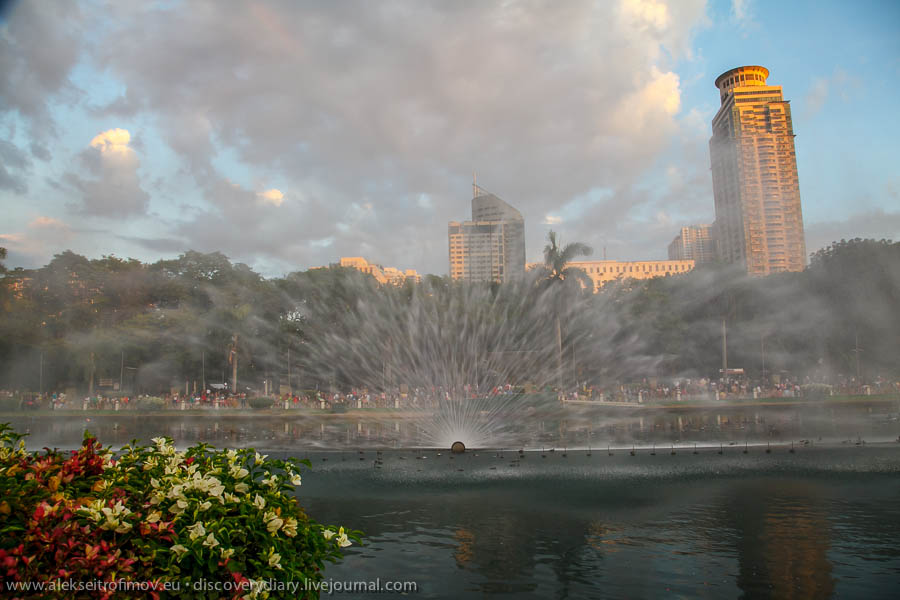 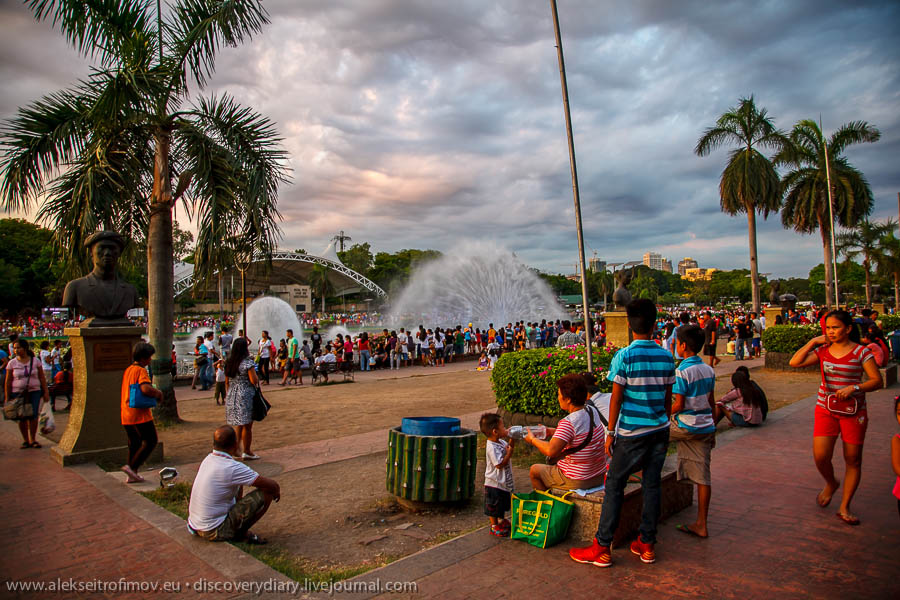 Even a fire show to mark the Sunday. 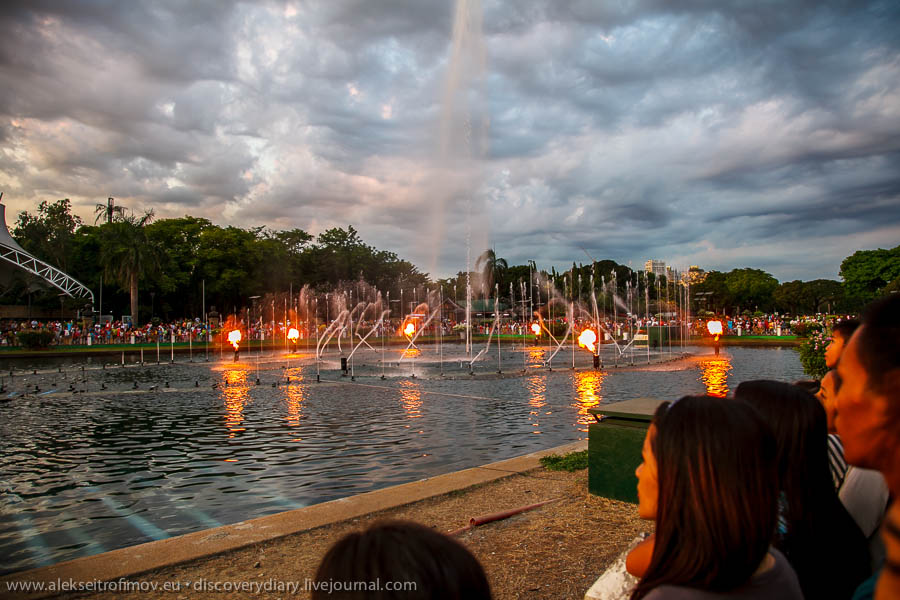 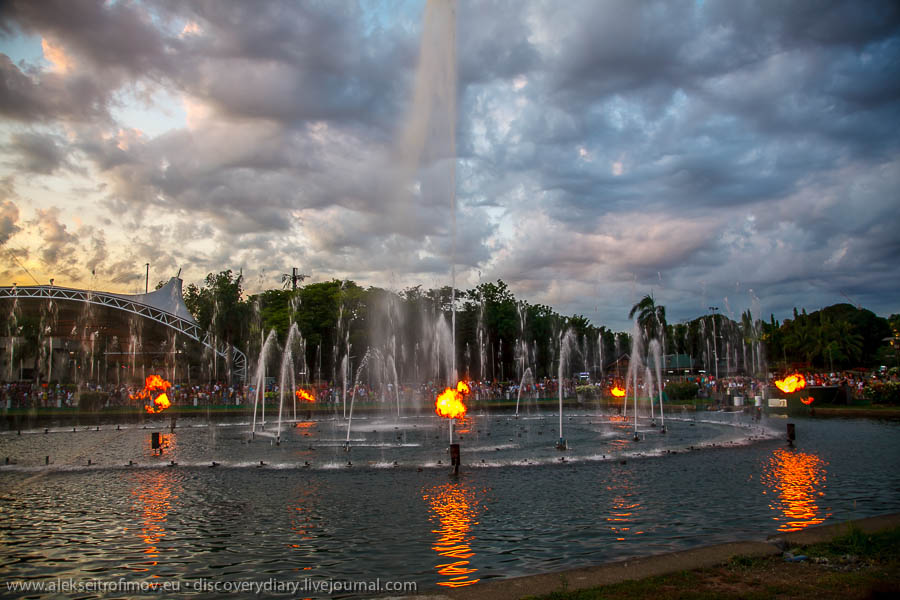 To be sure, Manila is not all neat and clean, this is what we see in the first metro station we enter: 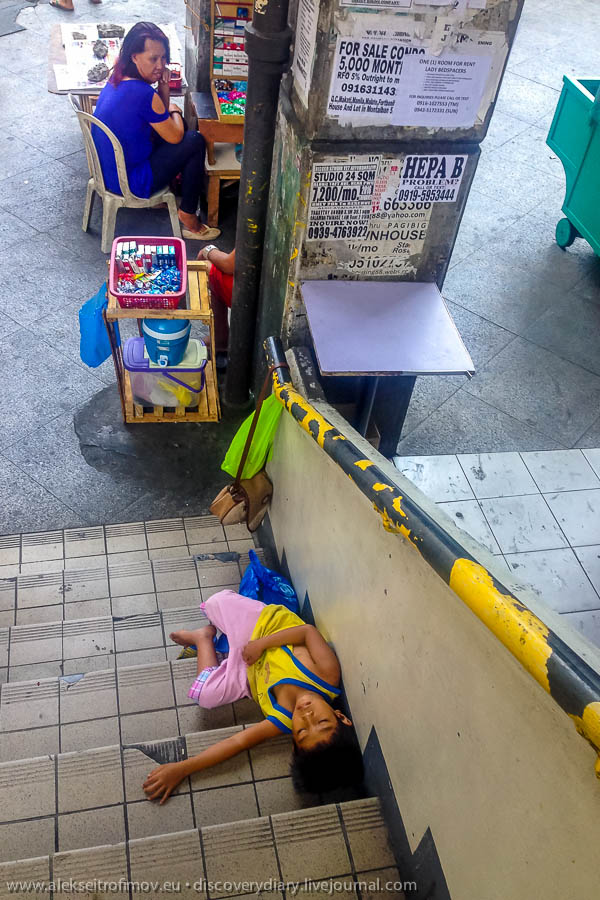 Right by the gates of Intramuros, next to the mountain-like walls on the first photo. Manila is a paradise for some, but a tough spot for great many. 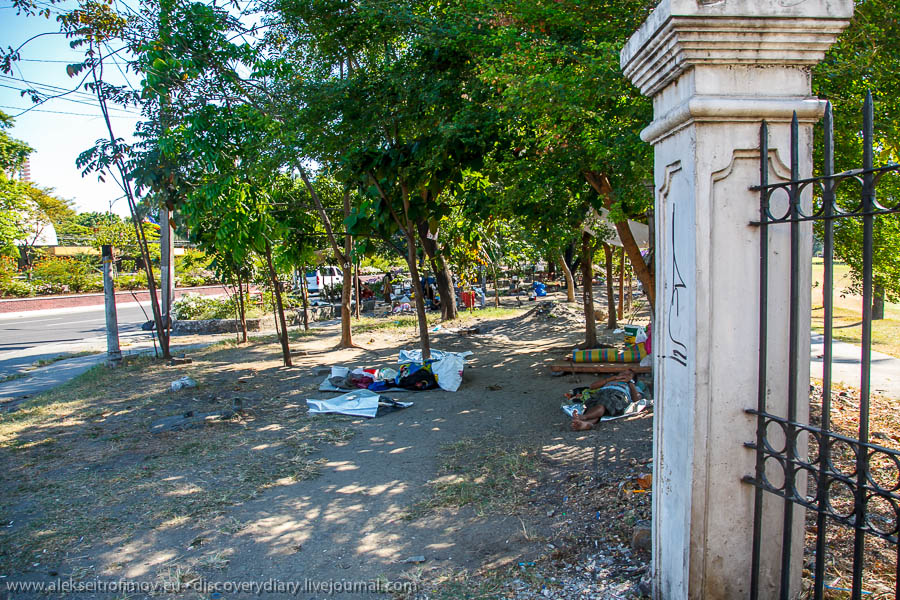 One thought on “Manila”