Some months ago I wrote about the wonderful Peruvian cuisine. Now I would like to describe my gastronomic experiences in Argentina and Chile (with emphasis the latter). The food in these countries can be characterised as relatively simple but fantastically tasty.

Argentina is of course famous for its amazing steak, which is accompanied by wonderful Malbec. I already describe taking a self-guided wine tour in Mendoza. I’m a big lover of steak and it took me some time to select the variety that I like the most among many offered in Argentina. Interestingly it is not the most expensive one – ­which is usually ojo de bife, or ribeye. Ojo de bife tends to be rather boring, although it comes from the best meat. But the tastiest – ­definitely not the healthiest – ­is bife de chorizo. It is a real steak with small fatty parts. It’s quite incredible, just melts in the mouth. There is an ever fatter variety, very popular in Argentina, with whole long pieces of fat included, which is called here asado, but this one I could not eat.

In Argentina they love their steak well-cooked, which is right against my preference, as I like it tender and bloody. Every denomination here needs to be decreased by one notch, so for example if you want it medium-rare, you ask for rare, for medium you ask for medium-rare etc. I insisted every time that I really want it rare, i.e. jugoso, sí, sí, ¡bien jugoso!

Steaks
One of the many melt-in-the-mouth Argentinean bife de chorizo: 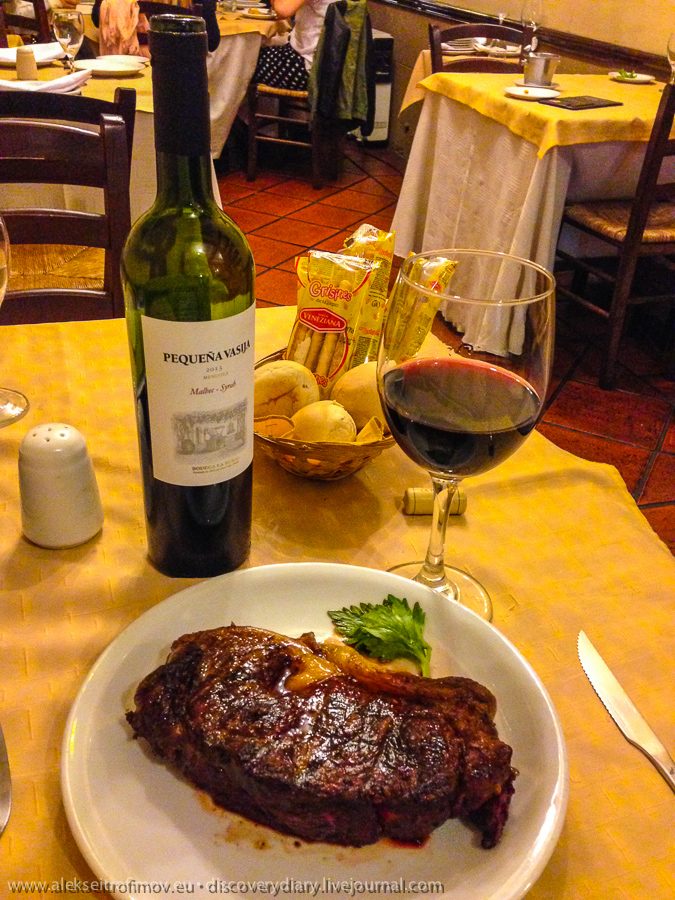 This is my first steak in Santiago, from a special quality part, called entraña. It is chic both how it looks and how it tastes. 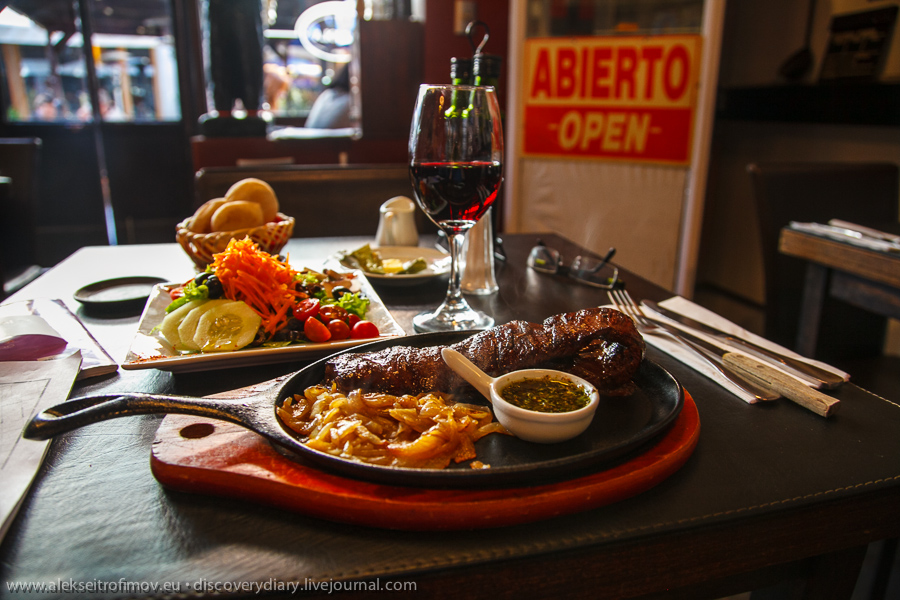 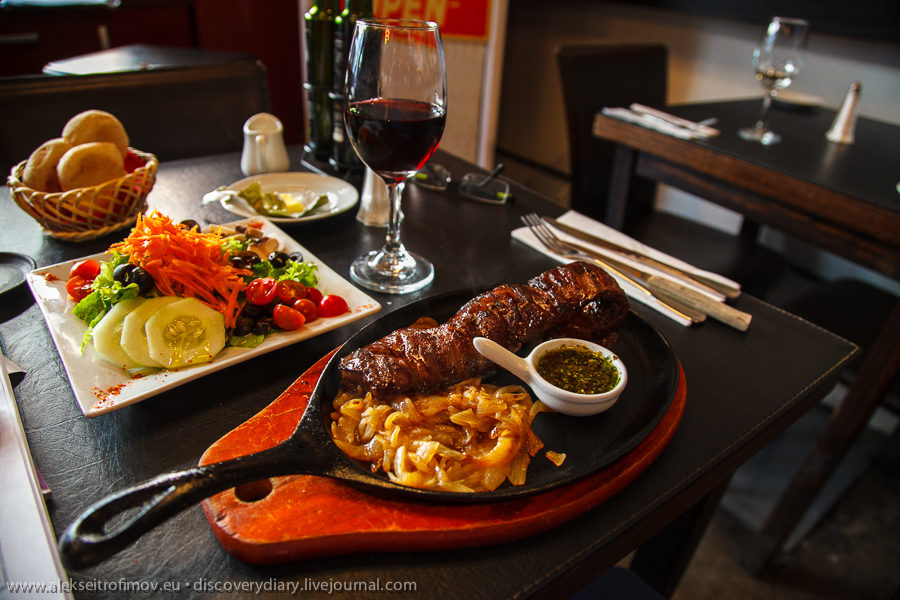 This is not a steak in the sense that it is not beef but Patagonian lamb. Also rather fat, but impossible to resist. 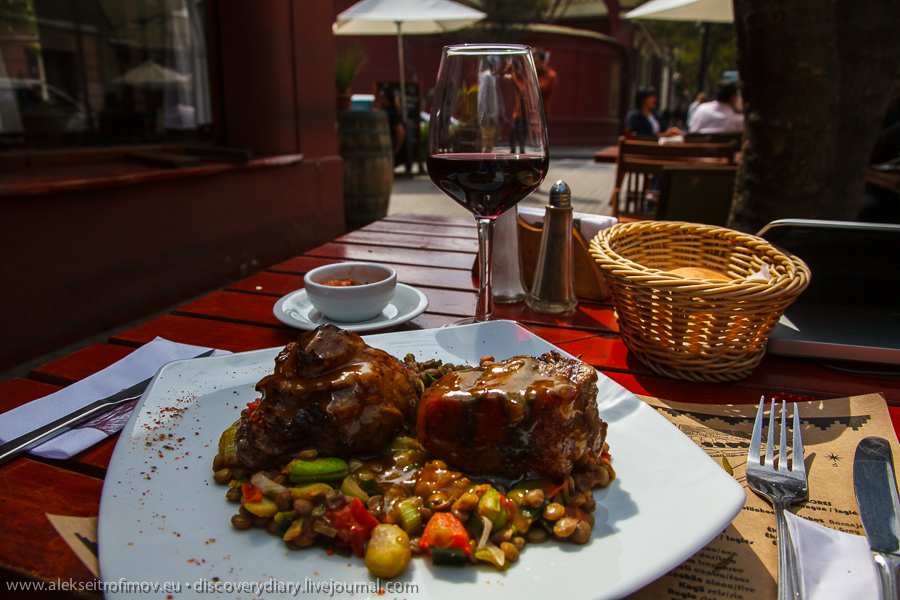 Seafood
Chile of course runs all along the ocean with all its presents. I just had to try octopus which I love (but this one doesn’t come close to the Greek octopus – ­and the best octopus in my life was eaten on the island of Santorini) 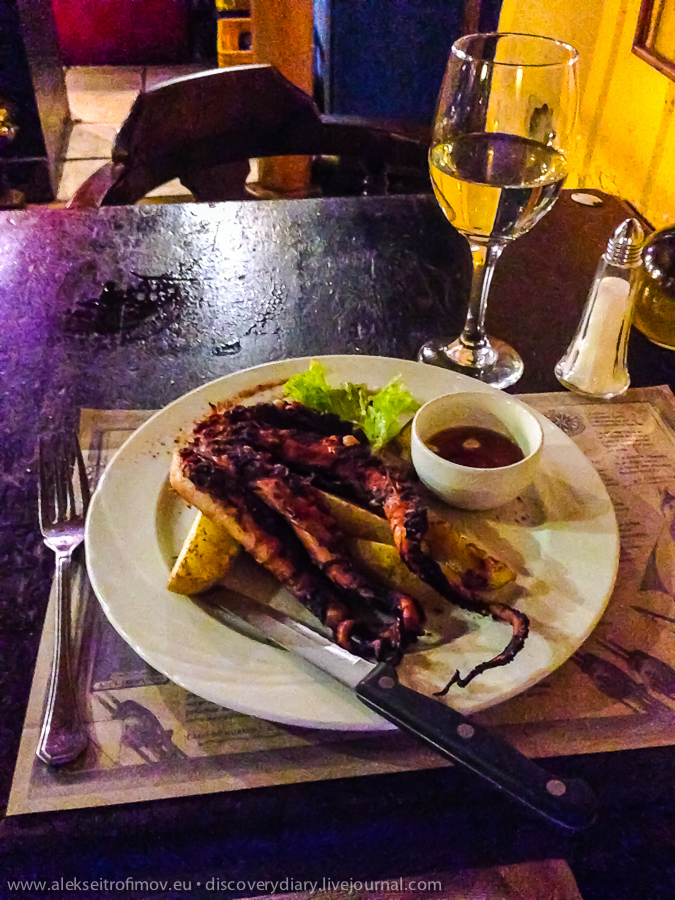 Fish and pisco sour in one of the many Peruvian restos in Santiago: 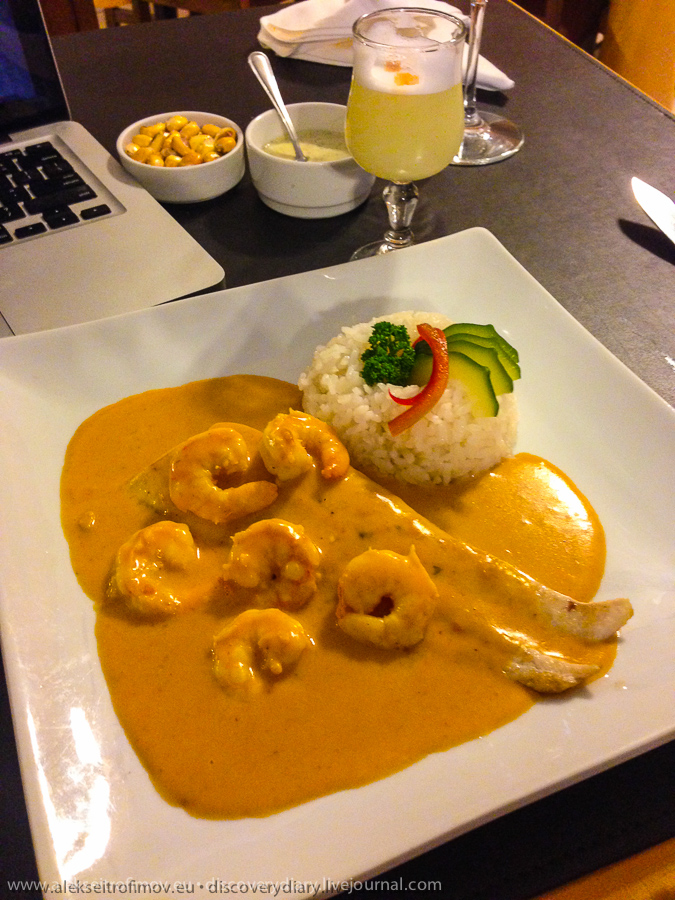 In Valparaíso, right on the shore, you can try many incredible seafoods. A wonderful seafood concoction featuring a number of steamed molluscs: 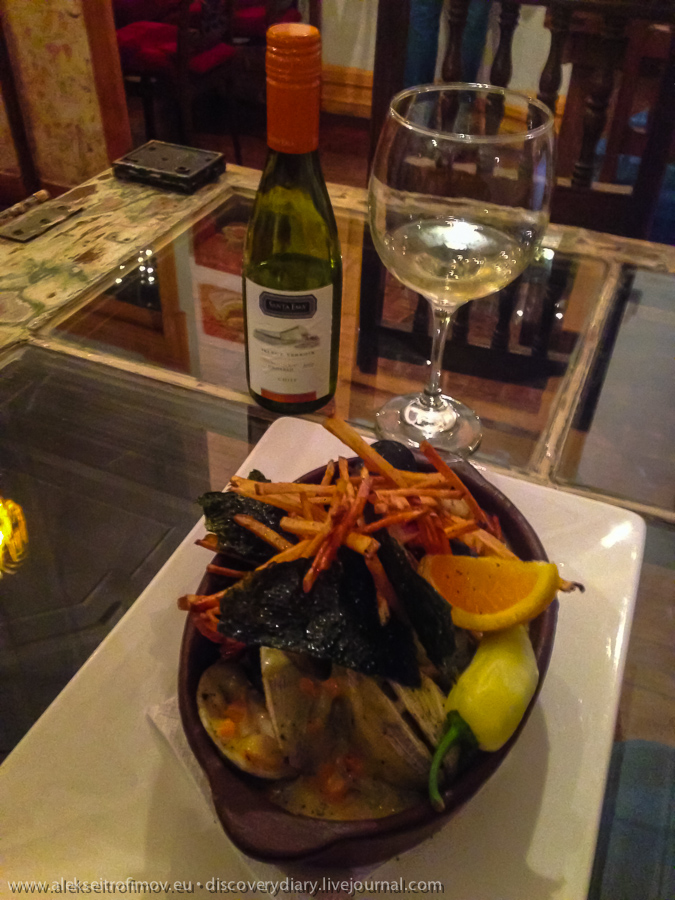 And finally a delicious starter of abalones, also in Valpo: 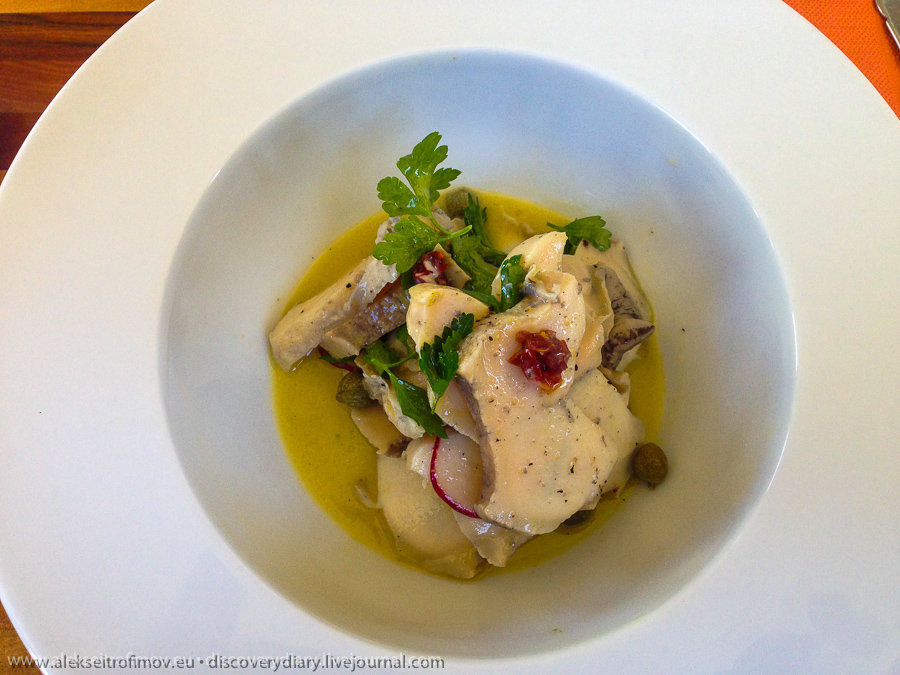 Street food
But the most unexpected discovery in Santiago for me was the street food, the Chilean answer to McDonald’s. You can eat street food in two types of places:

Type 1. Right on the street: 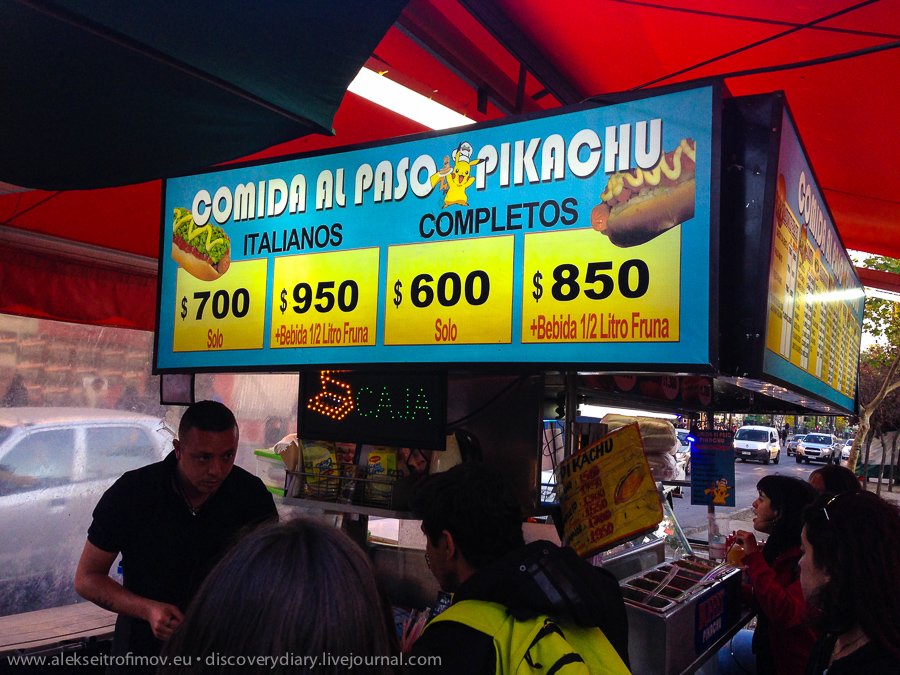 This had to be tried out of necessity, coming back at 6 in the morning from a night club. I was mystified by the terms italiano and completo, so took a random pick and was shocked by how tasty it was.

What is a Chilean italiano? It is a sandwich consisting of a sausage, a huge amount of avocado paste as well as optionally local mayonnaise and ketchup. This answer to hot dog is incomparably better! And costs around one dollar. Resistance is futile, at least in my case. 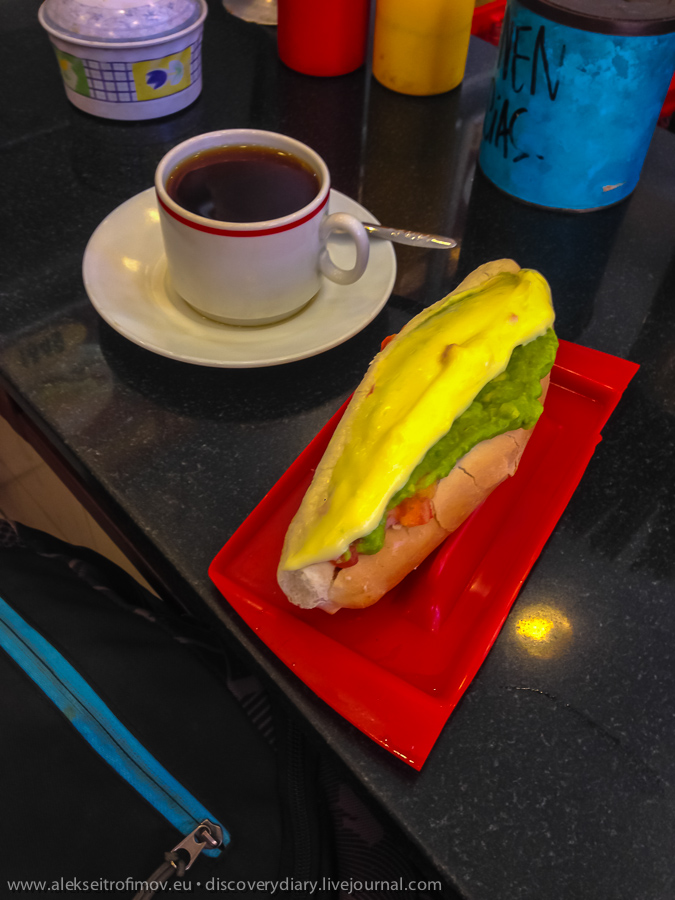 Type 2. A hole-in-the-wall type of establishment, always marked with a standard green lettering. At first I looked with certain suspicion at these places, but a couple of times hunger overwhelmed me at times when nothing else was open, in the middle of the night, so I went there. The food in these places is way cheaper than in any touristic place, but it is really tasty. Over time I stopped even considering going to classic touristic restos and only ate in these places. Apart from the wonderful food and an endless variety in the menu, they offer the additional bonus of observing the locals in their natural habitat, and they look rather colourful. The old people tend to appear quite beaten up by life. The young are all tattooed and pierced and have very extravagant hair. Very different from the people you see in touristic places.

Apart from the endless combinations of italiano and completo (which is the same sandwich with sour cabbage replacing the avocado paste) in these place you can try many other more substantial dishes of the local cuisine. When I looked at the menu for the first time, I didn’t understand a thing – ­all the terms were local Chilean, and even my offline dictionary app refused to recognise any of them. I took an academic approach, copied all the terms and then researched them in the web and methodically tried those that seemed promising.

A hellish mixture, also known as the locals’ favourite “cocktail” terramoto (i.e. earthquake). In this rather copious glass you got a mixture of fruity white wine and ananas ice cream. You really feel like the earth is shaking after you drink it! 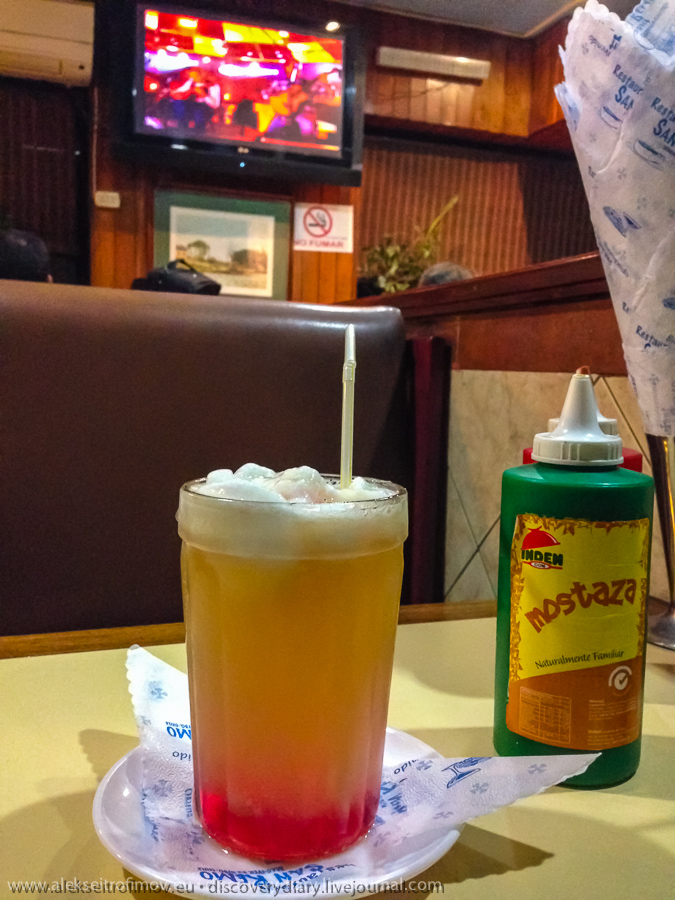 Here together with terramoto I am eating a wonderful started called palta cardenal. This is salad and seafood mixed with thinly cut avocado and mayonnaise. Incredibly tasty! In the classical preparation instead of seafood you get sliced chicken (then called palta reina) or sliced ham (palta york). 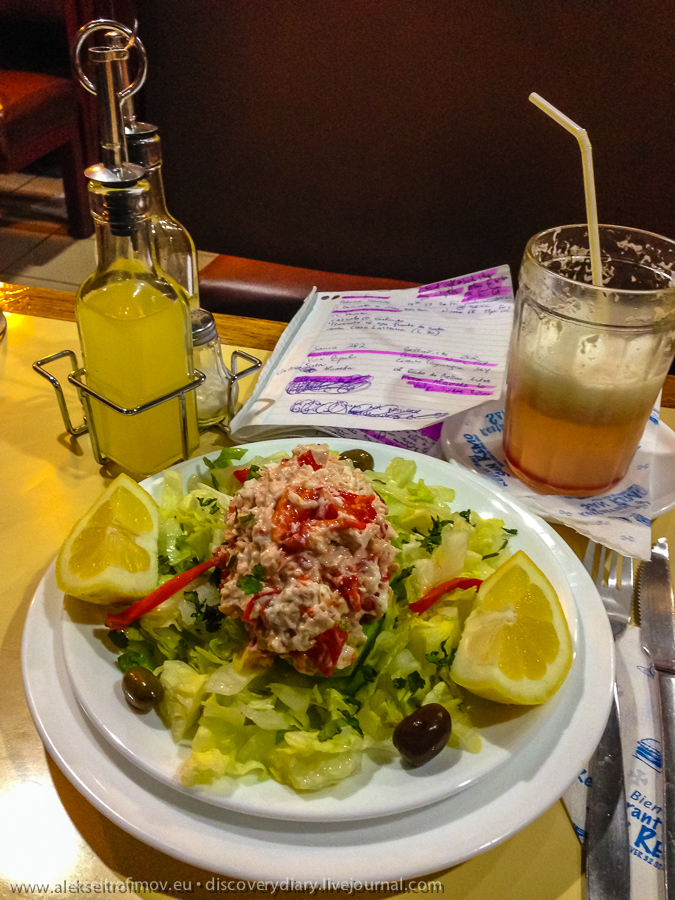 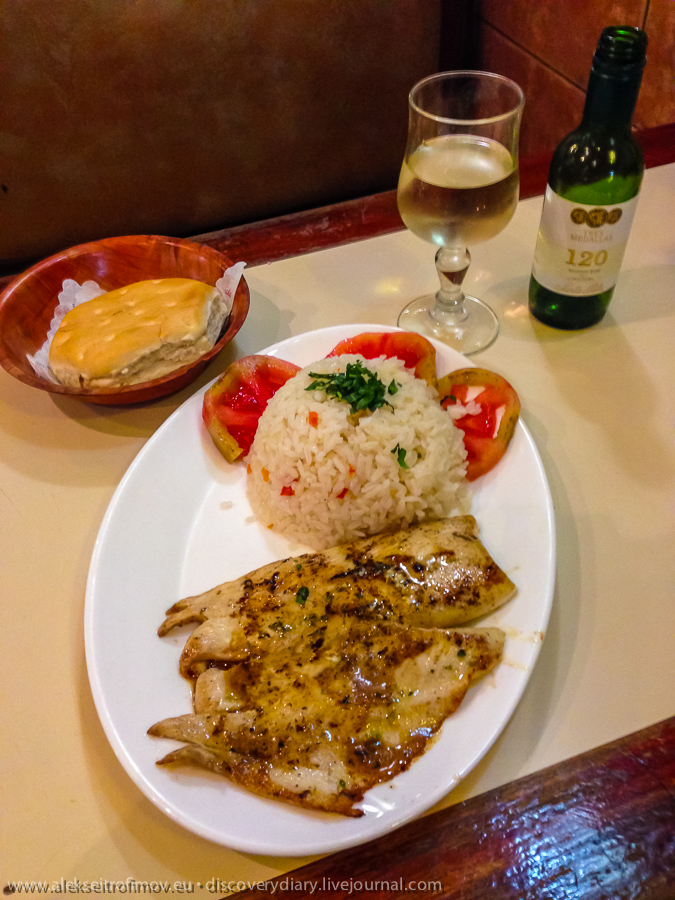 Cazuela, meaning just pot, a typical local dish, a soup with a lot of ingredients, of which the central is a big cut of meat. 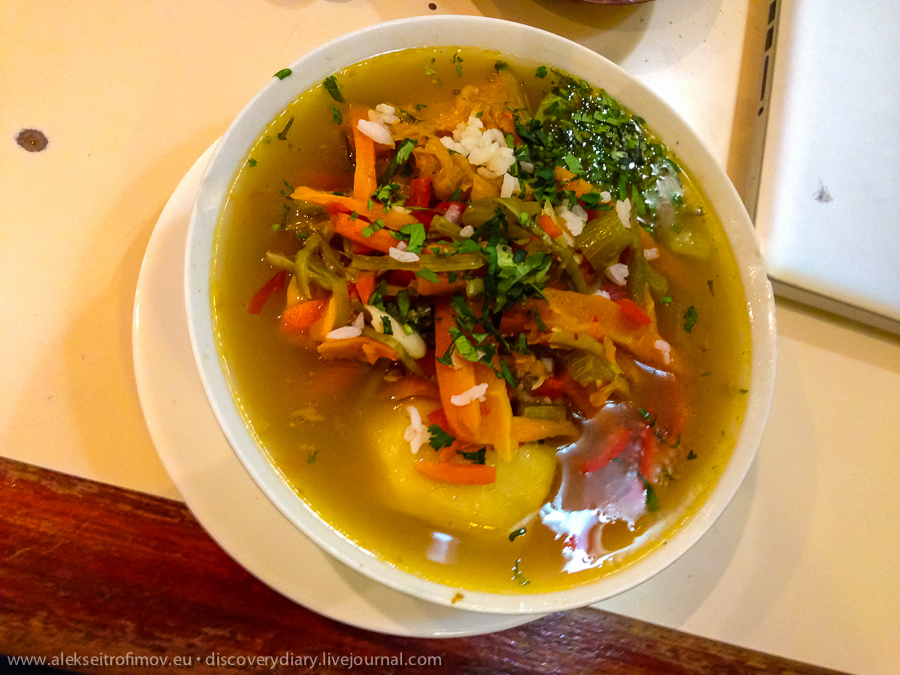 Among the main local dishes also has to be mentioned chorillana – ­a kind of a mountain of meat, sausage, onions and potatoes – ­which I skipped due to its size – ­as well as churrasco, thinly cut grilled meat, served inside a sandwich or simply accompanied with fried potatoes.

Even in the most simple places you can pay with a credit card. In Chile they always add 10% gratuity to the bill. In higher level places they even type it on the printed bill, in simpler places they write it by hand. Anyway it is not actually obligatory, although it is not well seen when you refuse to pay it (which I did a couple of time when I wasn’t too impressed with the service).

This refreshing drink, mote, is sold on streets everywhere in Santiago. There is a piece of peach swimming in it as well as grains. 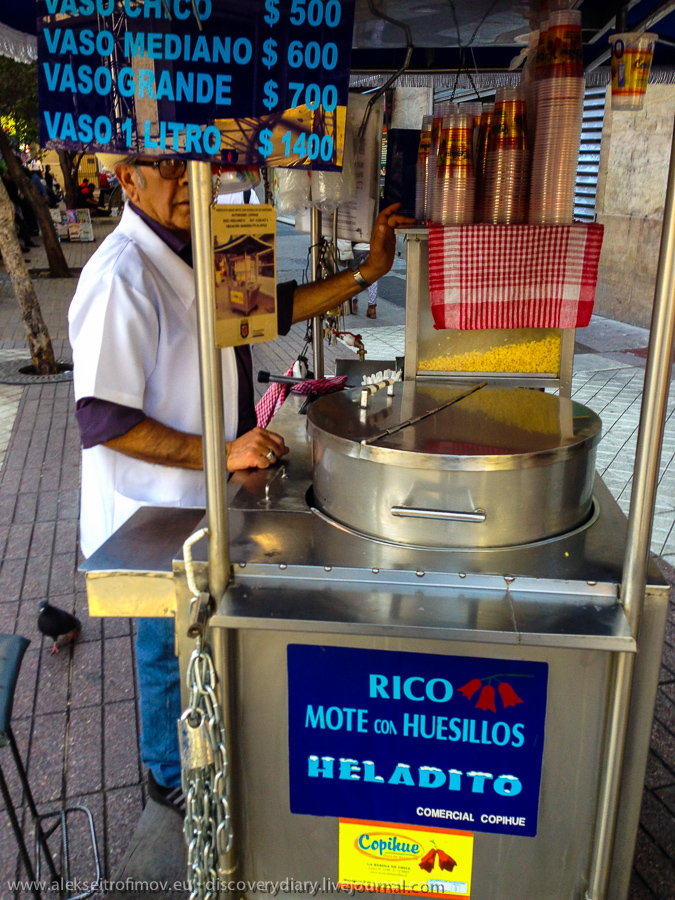 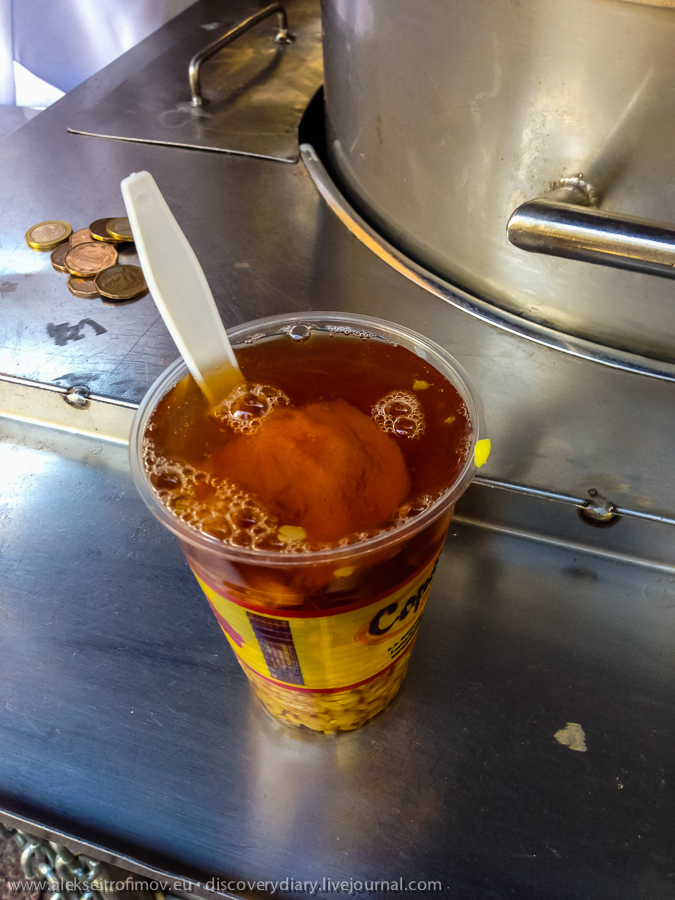 If bife de chorizo with Malbec was the main gastronomic theme of Argentina, then in Chile I would say that the main leitmotif was avocado. It is grown here in great amounts and is added to everything with great results. Local friends complained to me that avocado is getting expensive, costs 3 dollars a kilo! I looked at them with light hatred. Among the drinks I must mention sparkling wine, which they unabashedly call champagne here. It is quite cheap, but good, in a nightclub you can get a small bottle for 5 dollars. So my weekends in this city tasted of sparkling wine.

One thought on “Avocado with champagne in Santiago”