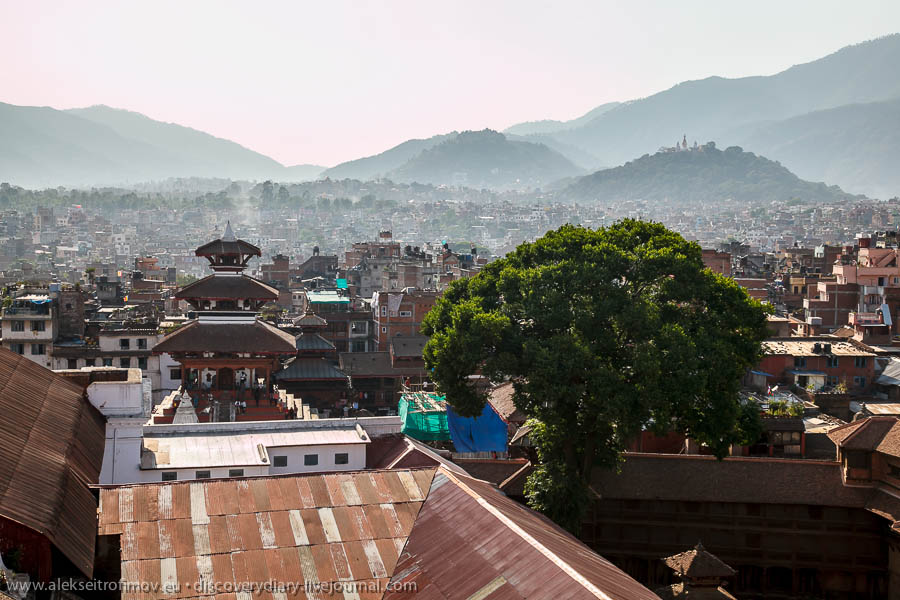 One more photo from the Basantapur tower this time looking South. This square is called the Basantapur square and it borders the old royal palace and the Durbar square from the South. Right in front of us is the Freak Street. In the seventies the hippies made it their abode, this is where they meditated, smoked hash and explored free love. Today the touristic mecca has moved North to the Thamel area. There are much less freaks on Freak Street, though now and then you still see an obviously high gentleman in long-sleeved tunics and hair in dreds. 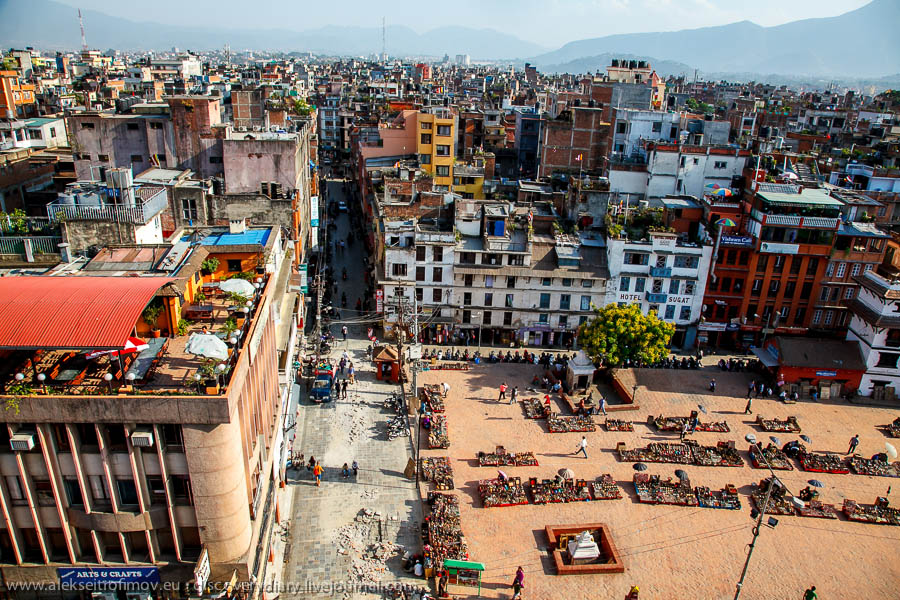 Kathmandu’s pride and glory – the Durbar Square. The very name Durbar Square gives me goosebumps, my fantasy explodes with exotic images and sounds of sumptuous processions which took place here for hundreds of years, headed by the God-King of Nepal, the living avatar of Lord Vishnu. The following three photos are continuous. It is the Southern part of the Durbar Square. The Square is in fact a quaint combination of open spaces in an approximate configuration from Southwest to Northeast, surrounded and delimited by temples and palaces. In your first days there it appears impossible to orient among these fantastical edifices, shouting salesmen, approaching guides and taxi drivers, sounds, smells, colours. Even the map you hold in your hands seems to have no relation to reality in front of you. A couple of weeks later you begin to make sense of the place of course. On the left on this photo is the temple of Trailokya Mohan Narayan, devoted to Vishnu. I am making this photo from the grandest temple on the Square, the Maju Deval, devoted to Shiva. 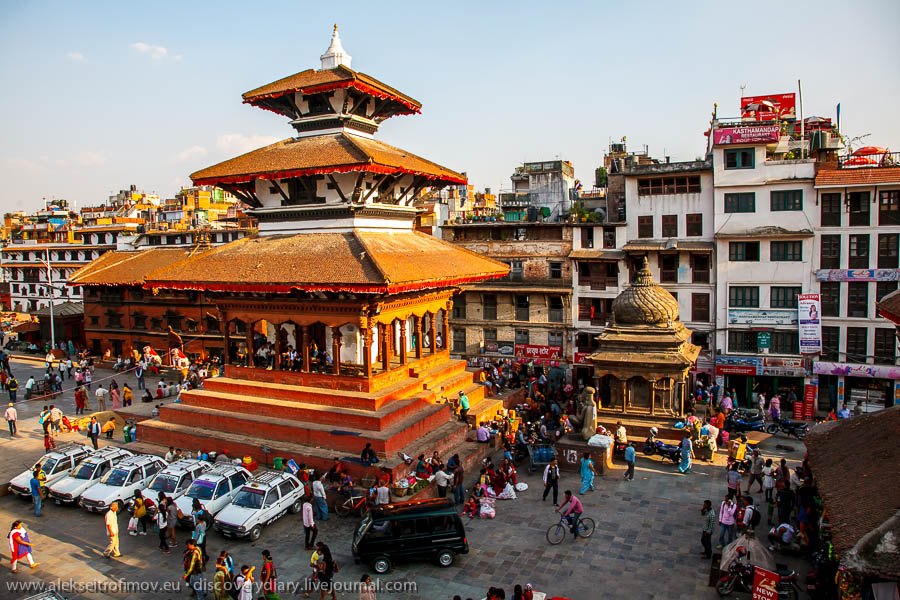 The sunset hour. The temple in the middle is called Bimaleshvar, on the right we begin to see the Laxmi Narayan temple. 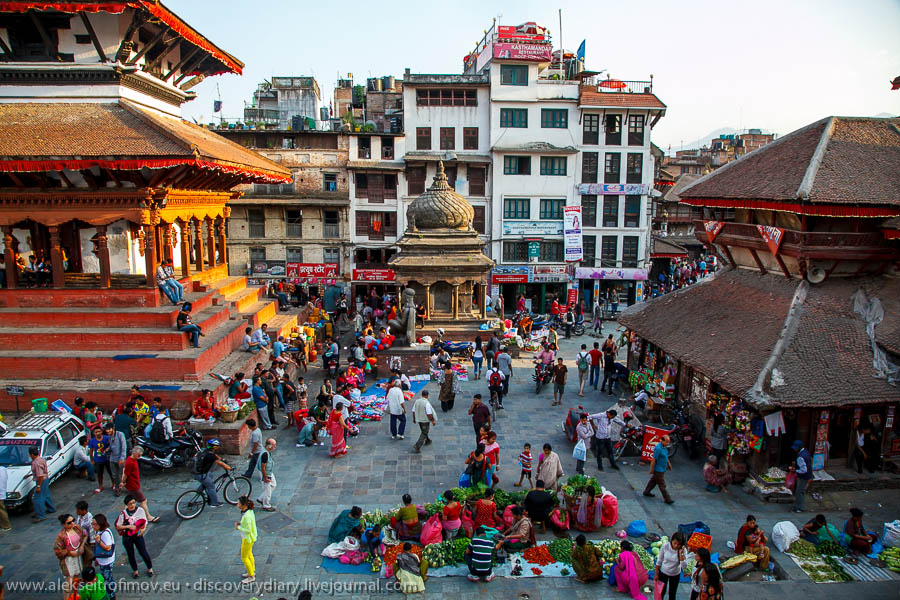 ANd here behind the Laxmi Narayan we can see another very large temple called Kashtamandap. This is the oldest temple in the Kathmandu valley, built in the 12th century. The legend says that only one huge tree was used to build it, but the locals question the veracity of this account. The very name of Kathmandu is derived from Kashtamandap. Today the temple is devoted to Goraknath, a holy ascetic who lived in the 13th century and was revered by the royal family. The temple is quite dark and gloomy inside, its upper floors are closed. 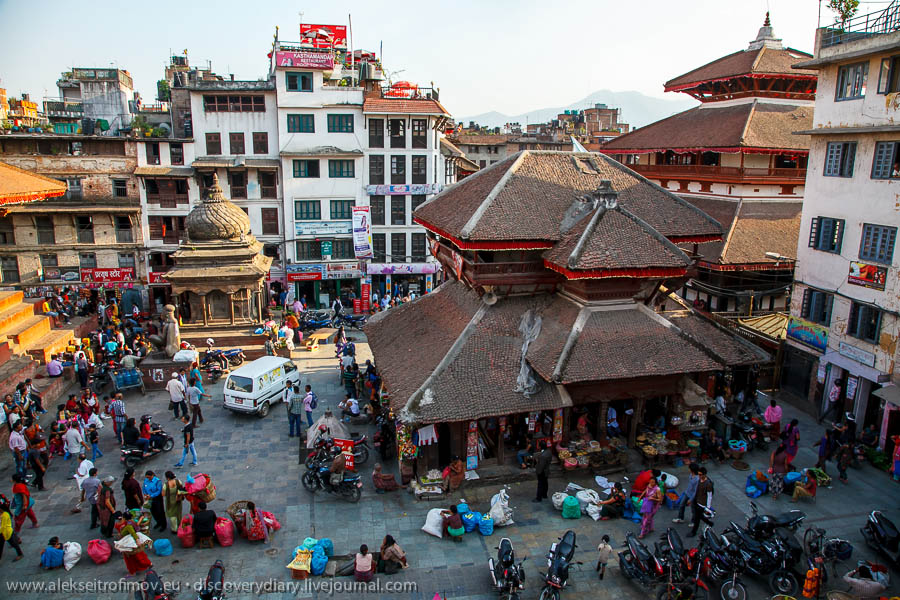 On another day we climbed the Trilokya Mohan Narayan seen on previous photos. Kashtamandap is right in front of us – at that moment we were not aware of its historical significance though. On the right kneeling among the chaos is a garuda, the riding animal of Vishnu. Every god in Hinduism is assigned a particular riding animal which is often placed in front of a temple, helping the devotees to identify the temple. Vishnu’s garuda is half-man, half-eagle. Seems full of tranquillity. 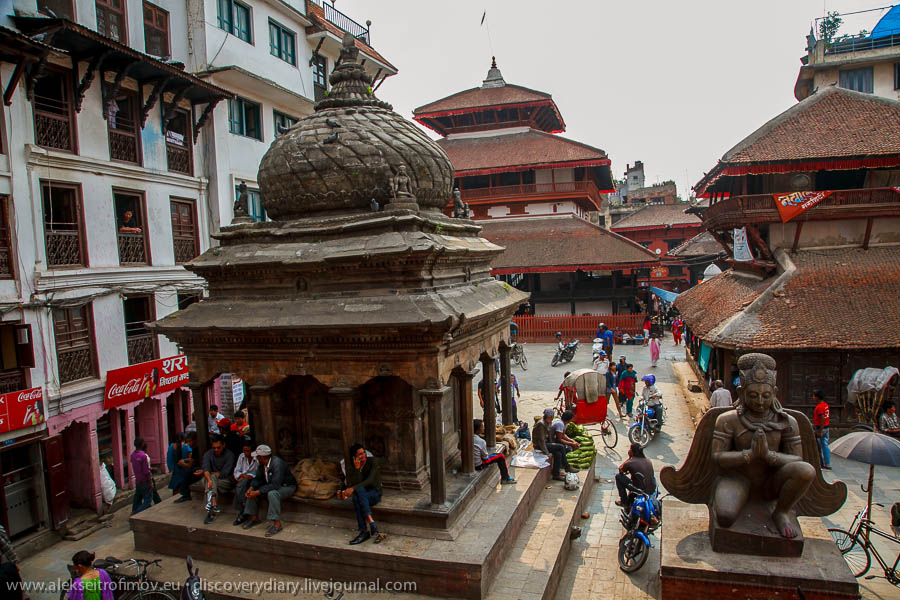 In the centre of the Durbar Square is the idol of Kala Bairab, the Black Bairab, Shiva in his most terrifying form. In the Middle Ages it was believed that lying in front of the statue would lead to instantaneous death. The Nepali kings would use it as a kind of a truth detector. 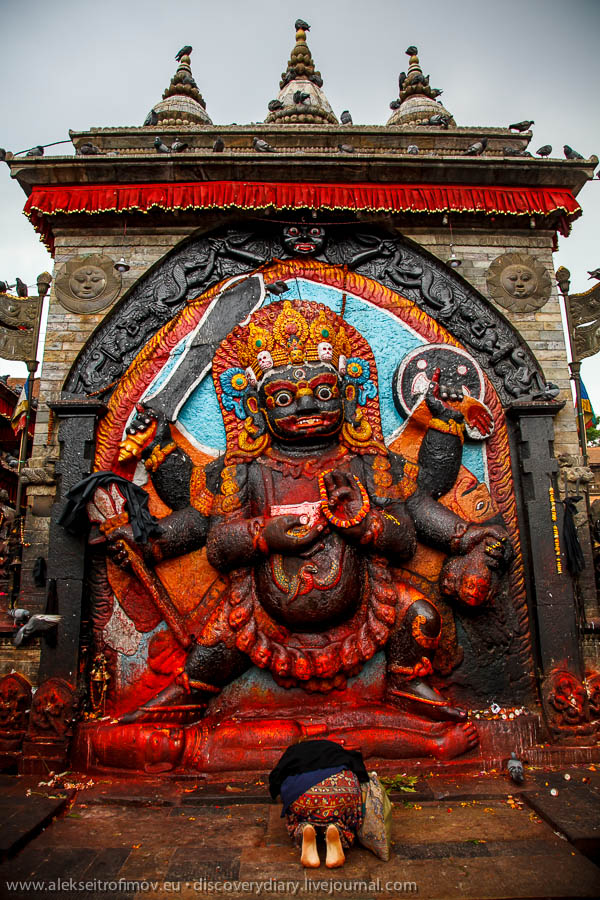 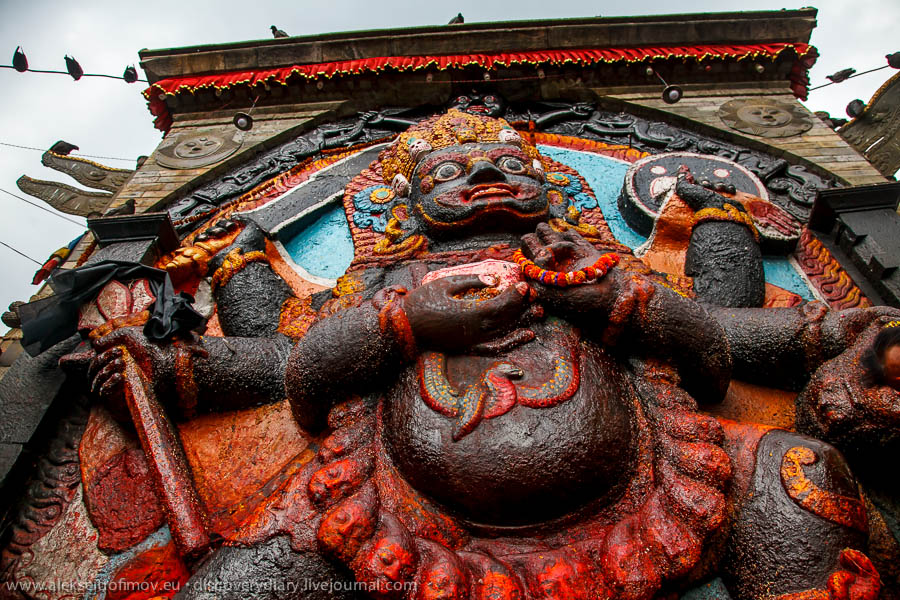 The Durbar Square is bordered on one side by a former Royal Palace, which is called Hanuman Dhoka. The kings have moved out in 1950s, to another larger and more modern palace. In 2001 in that new palace a momentous event took place that shook the country and changed its history forever. The heir-apparent took an automatic gun and shot dead most of the royal family, including his parents, the king and the queen. Then he shot himself. Why? They say that the reason was his resolve to marry his beloved, which the parents opposed. However most ordinary Nepalese I spoke with do not believe the official account of events. For example they say that the crown prince was left-handed, however his supposedly self-inflicted gun wound was to the right temple. People think it was the king’s brother who was behind the mass murder, who happened to be in another city at the time, whose family was miraculously spared and who inherited the throne. He was extremely unpopular and spent all his reign fighting the Maoist rebellion, finally only to be forced to abdicate. In 2007 the monarchy was abolished altogether and Nepal became a republic. 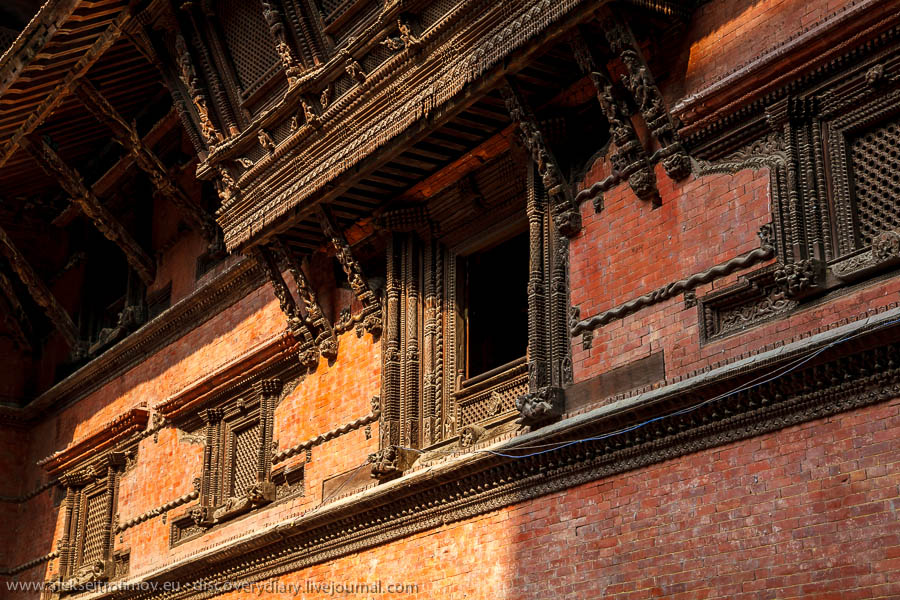 This is Kumari Bahal, the home of the Living Goddess. The entrance to this courtyard can be seen on one of the previous photos. The Kumari is the living incarnation of the goddess Taleju, the patroness of Nepal and in particular of the royal dynasty. Kumari is a young girl who is selected in an extremely rigorous process not unlike the selection of Dalai Lama. The goddess lives in her body until the girl reaches puberty, then a new Kumari is chosen. As we walked on the Durbar Square I suddenly had an impulse to enter that courtyard and so I dragged my companion there. The courtyard was full of excited visitors, and not a minute later the guardians demanded silence and “no photos”. And the Goddess revealed herself to us, in the central window on this balcony. 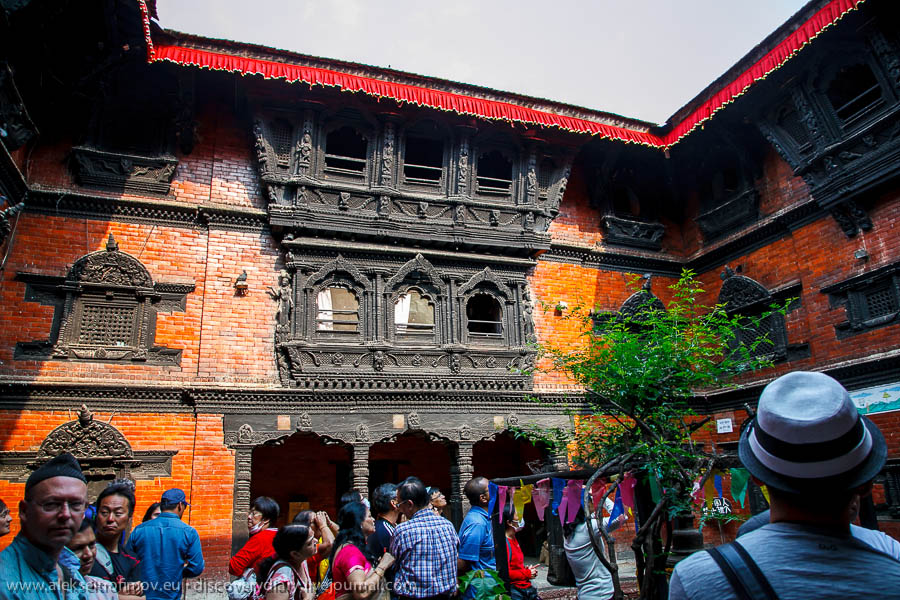 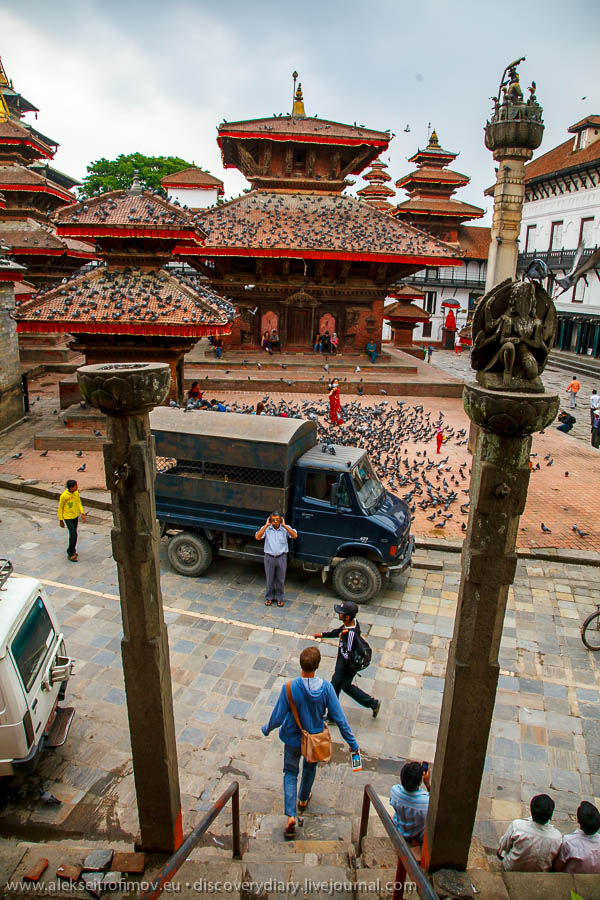 I rouse the pigeons by the Jagannath temple 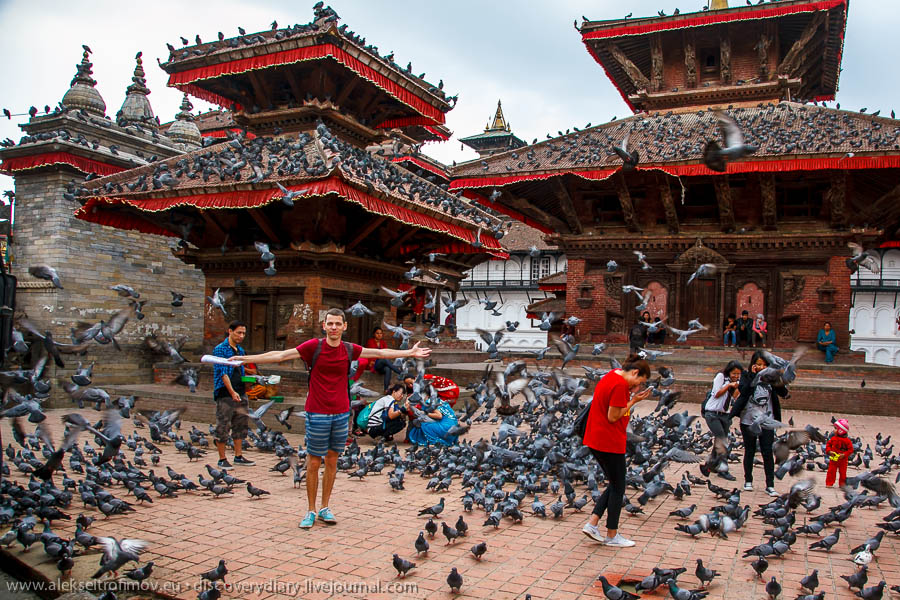 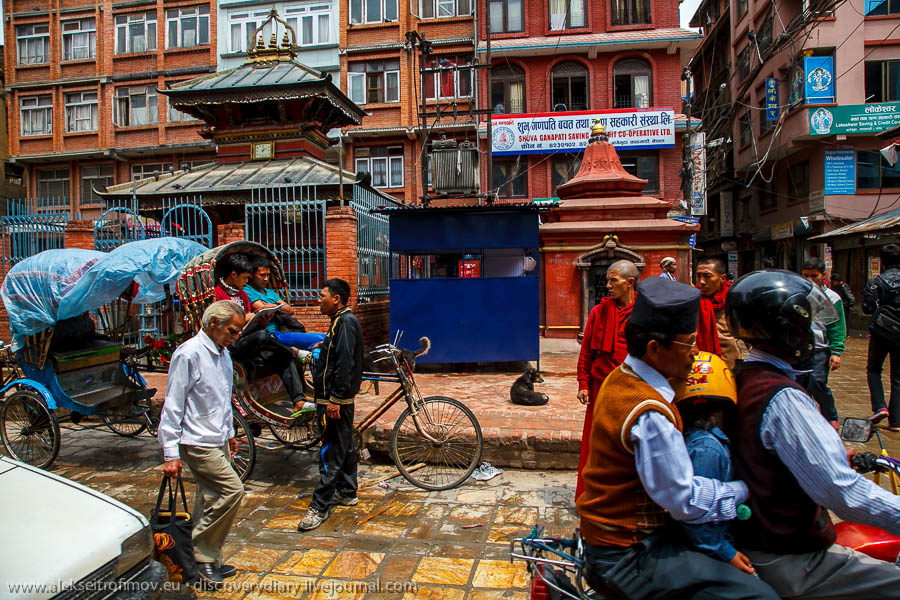 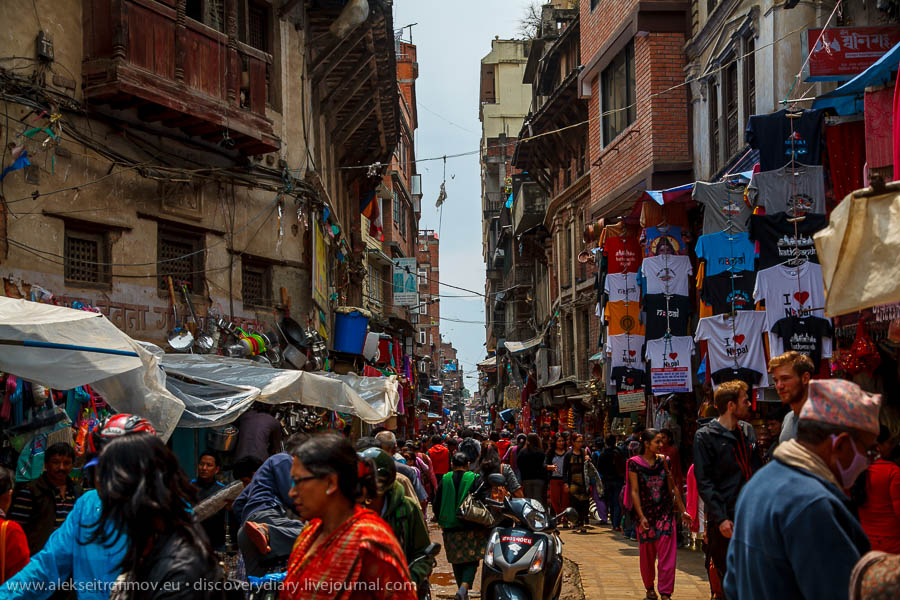 Any street corner can house a temple. 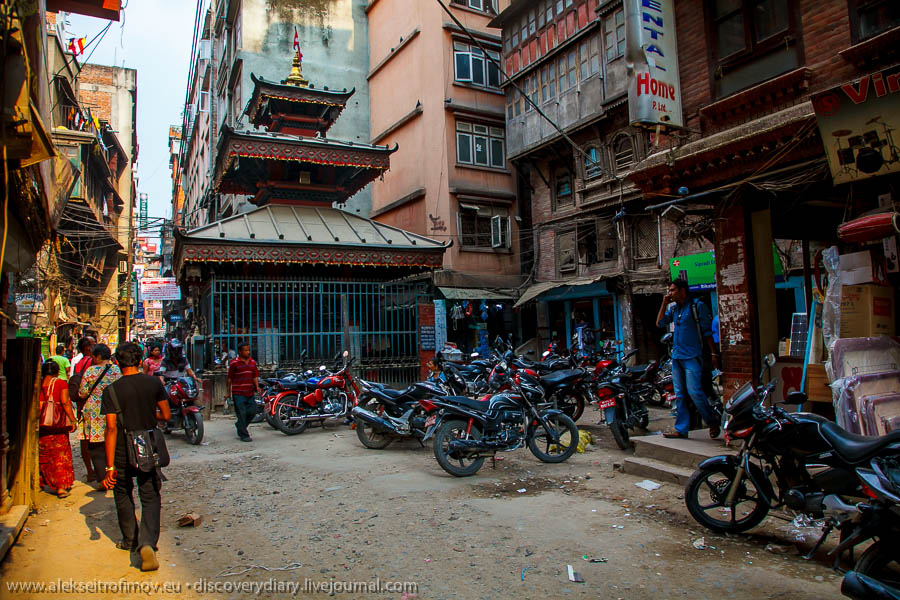 Sometimes you must bend in half to enter an internal courtyard – which too hides a temple. 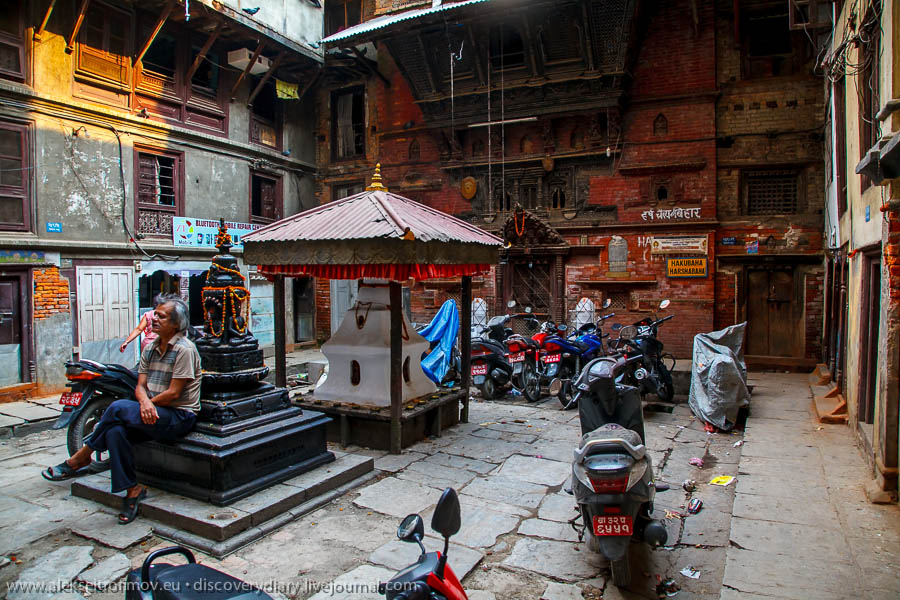 A white Buddhist stupa is hidden in another courtyard. 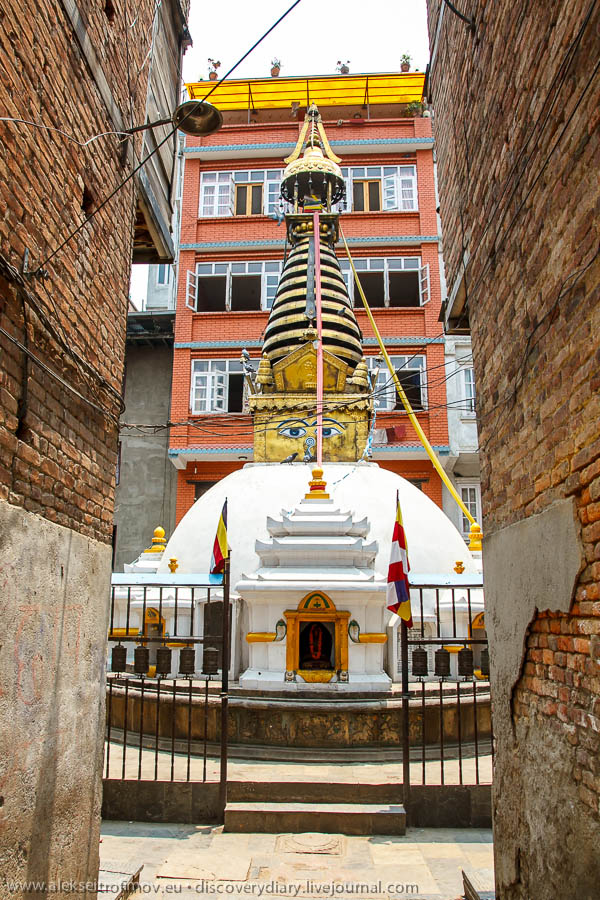 The further you go, the more fantastic it gets. On a lively street you find this formless mass of coins pierced together with nails. These are offerings to the toothache god. A tiny statue of the god is hidden somewhere inside this sprawling object. 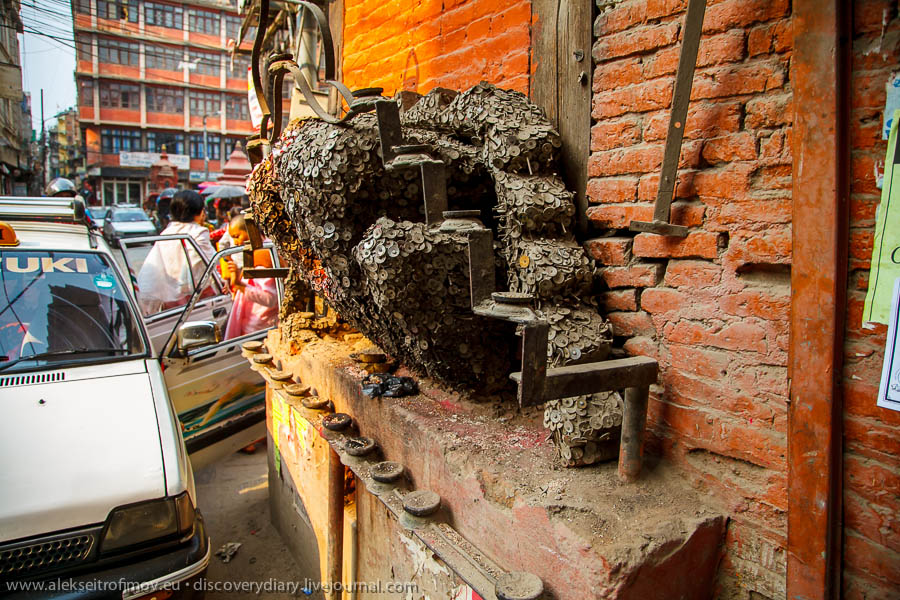 On a square full of shops you can find this small 60-cm high Buddha. It dates from the 5th century. 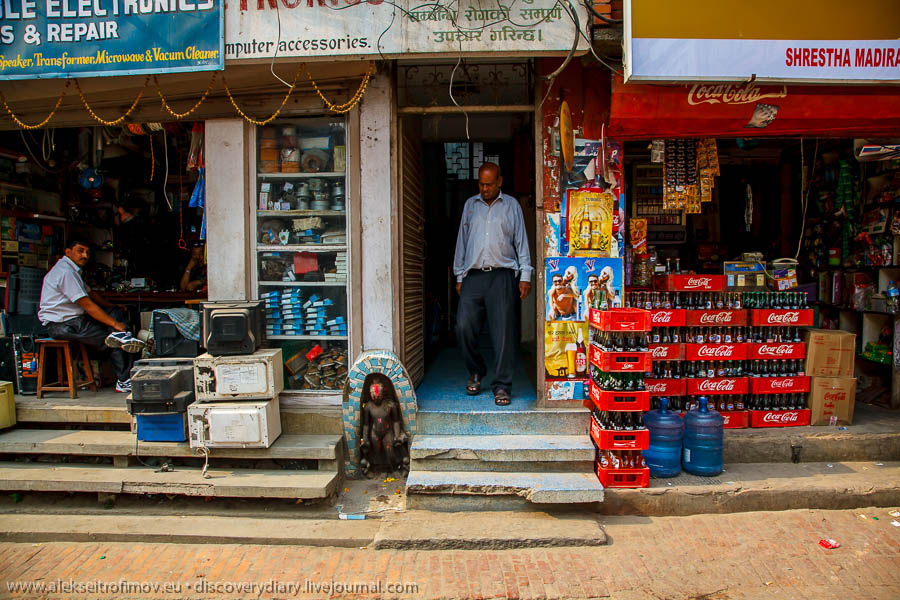 Inside the fantastic temple of Seto Machhendranath Temple (Jan Bahal) – open to both Buddhists and Hindus. 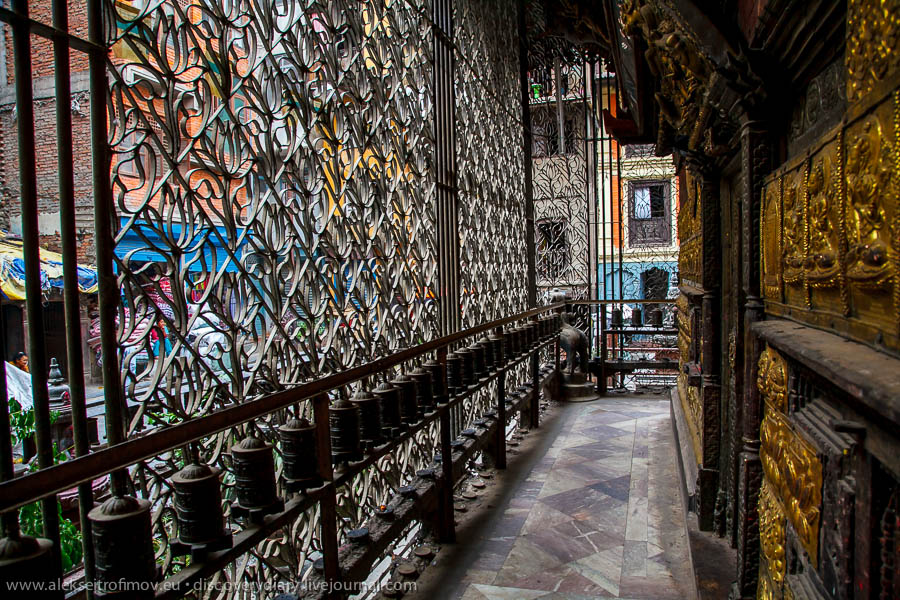 This is the rat, the riding animal of Ganesh the god of wisdom. It faces its tiny temple in small courtyard. 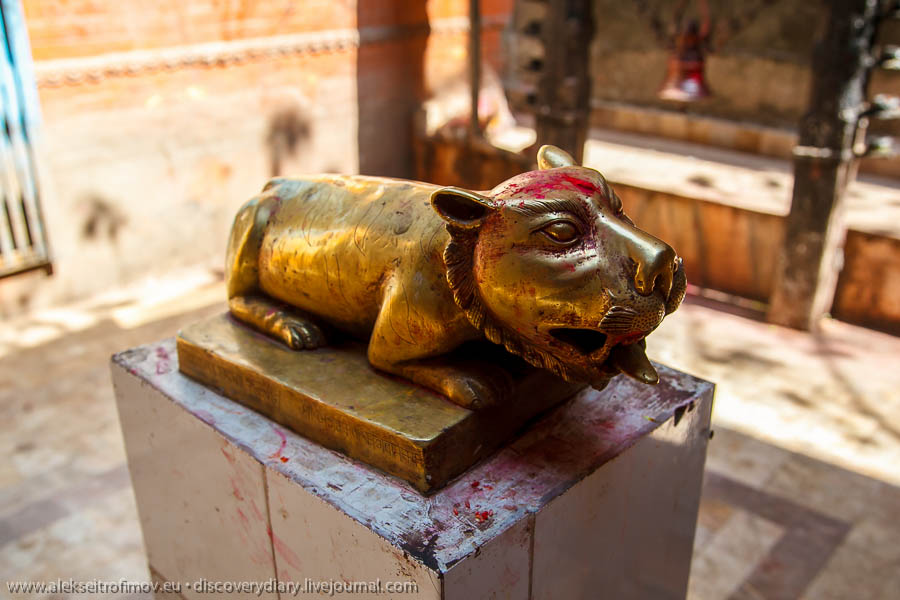 A Hanuman statue in another small courtyard, like a face of a tragic tribal chief. Guarded by huge dogs who sent me running. 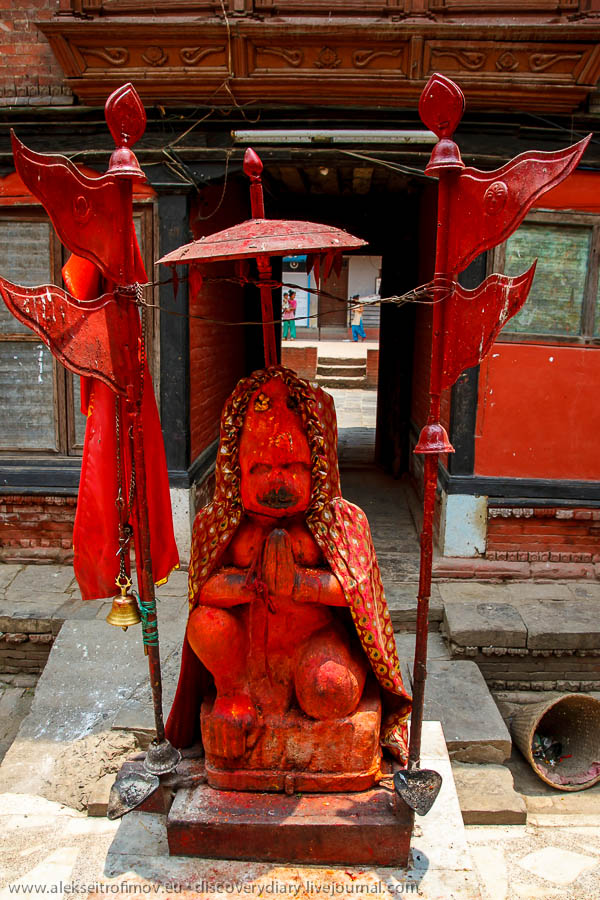 Vajra, a stylised bundle of arrows, representation of thunderbolt. In Buddhism it refers to the strength of spirit. 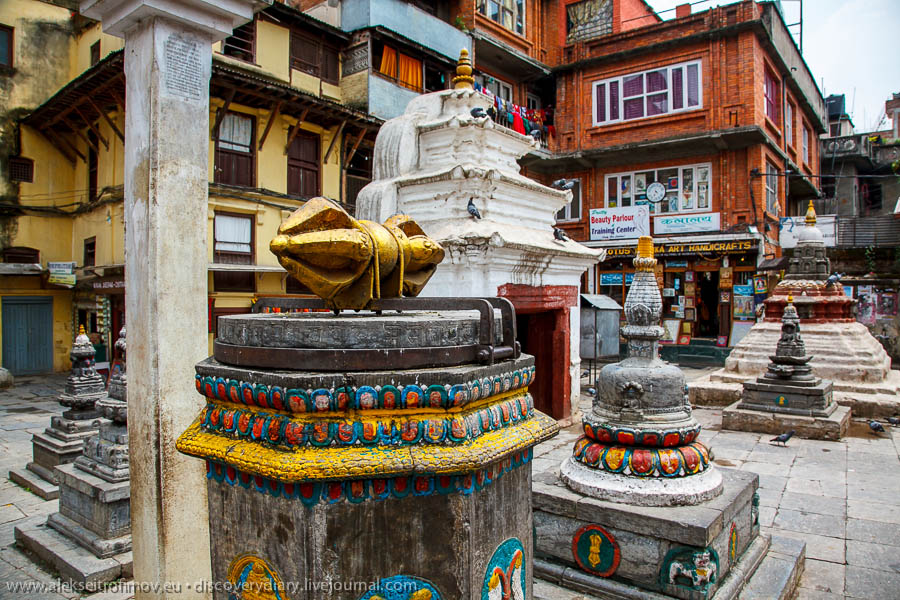 What is this question mark? The water containers await their turn in an ancient water tank. 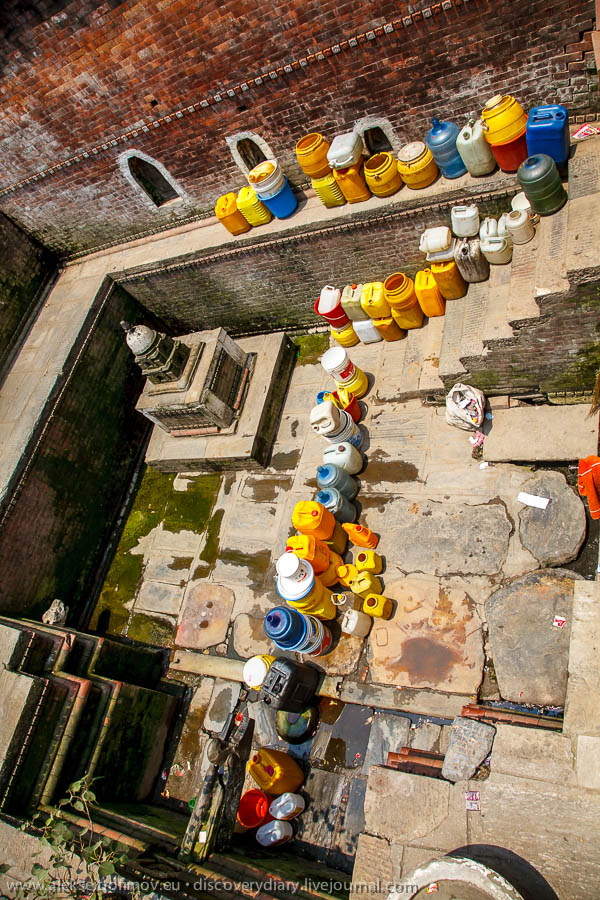 Buddha stares in every direction of Kathmandu. 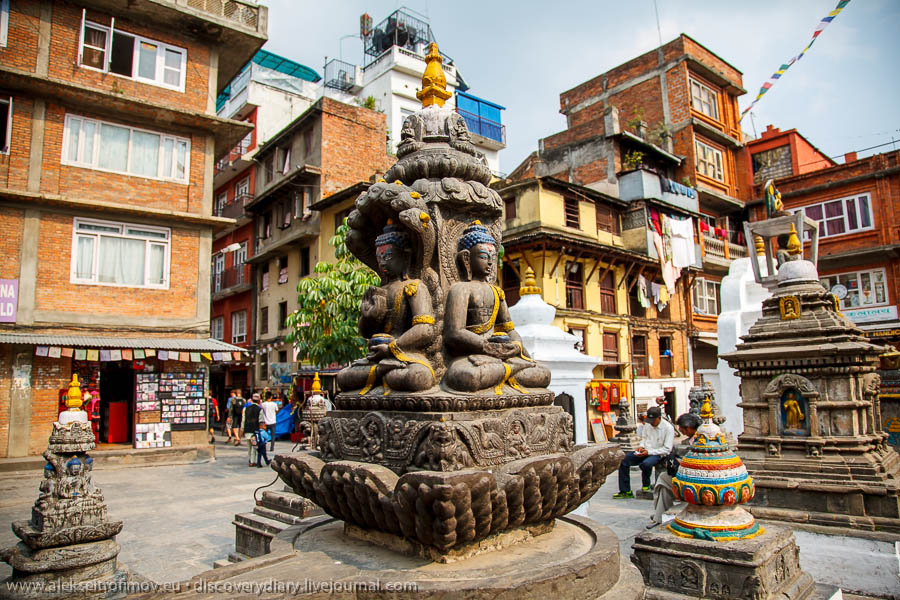 One thought on “The city of 30 million gods”