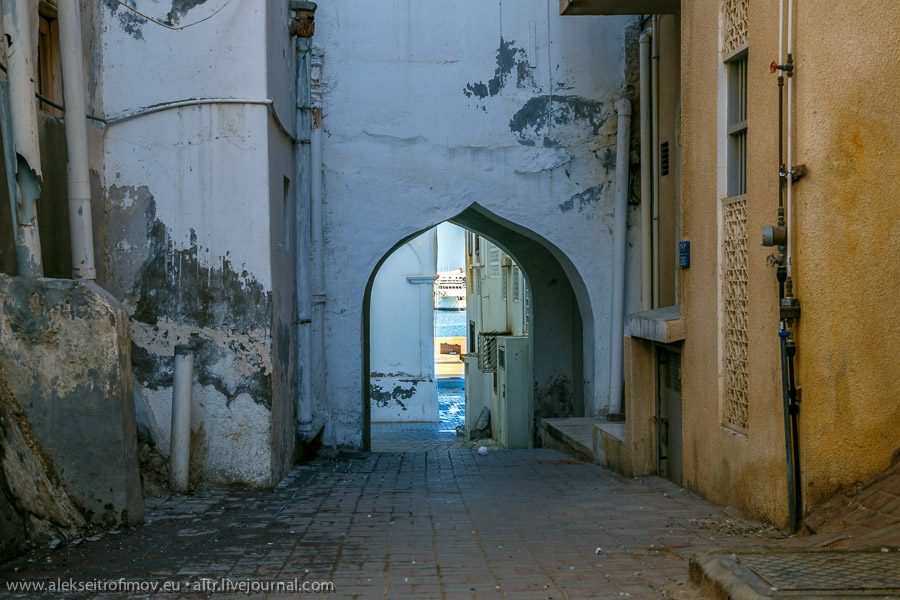 Suddenly the seafront opens in front of you in all its glory: 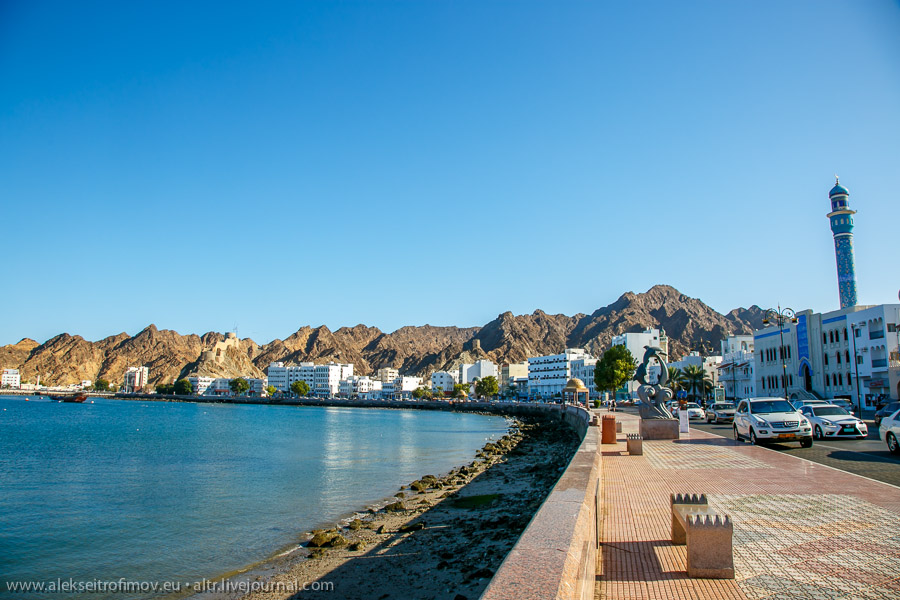 Dolphins are the symbol of Muscat. You often see them – as a sculpture and sometimes even live in the sea! 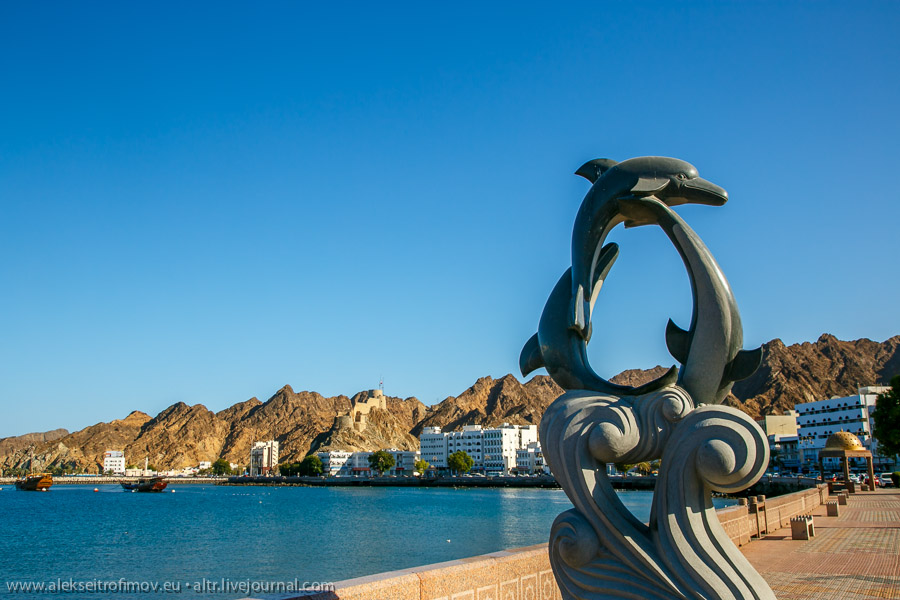 One of the many fortresses that the Portuguese built in and around Muscat. They took this regions for a short time at a time of Oman’s weakness. Uniquely the sultanate managed to rebuild its strength and to expel the Europeans! Stopping the expansion of the West for some 300 years. 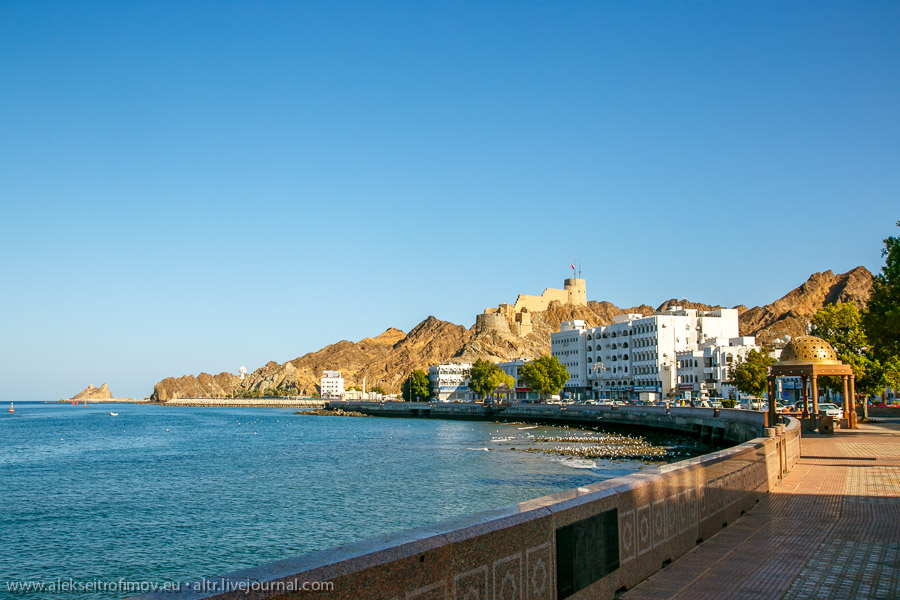 As I walk on the waterfront in the direction of Old Muscat – some 4 km – I look back at the Mutrah port: 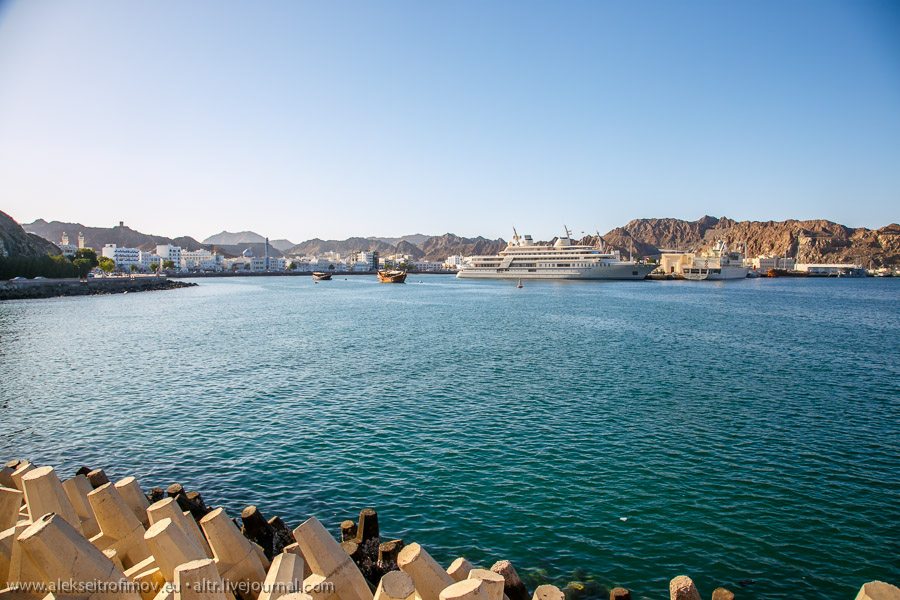 A huge entertainment complex is finished off with a giant incense burner on the top. No coincidence – the incenses are the famous product of Oman. You have to visit the park to climb the lookout, however to the left there was an open guard tower that I headed for. 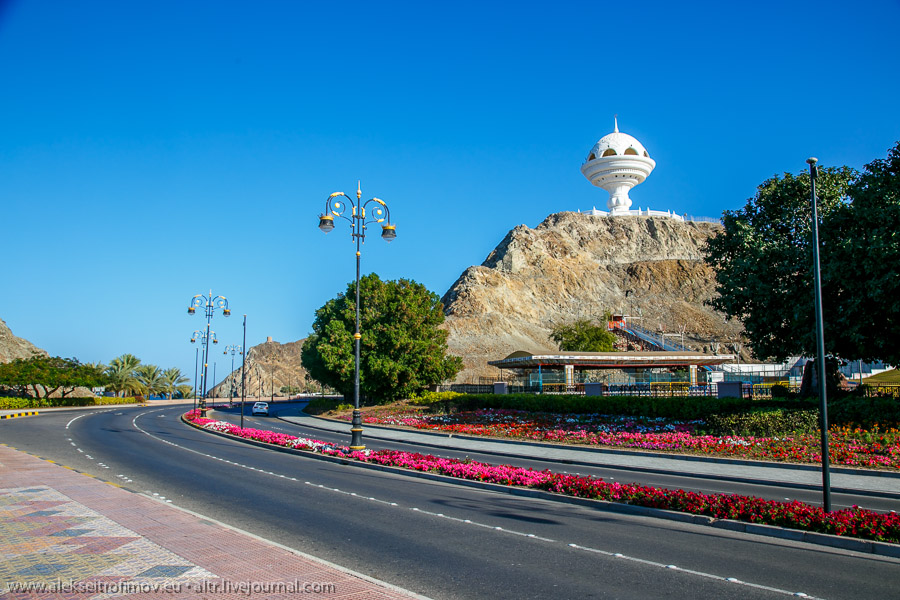 The views from there over the surrounding rocks: 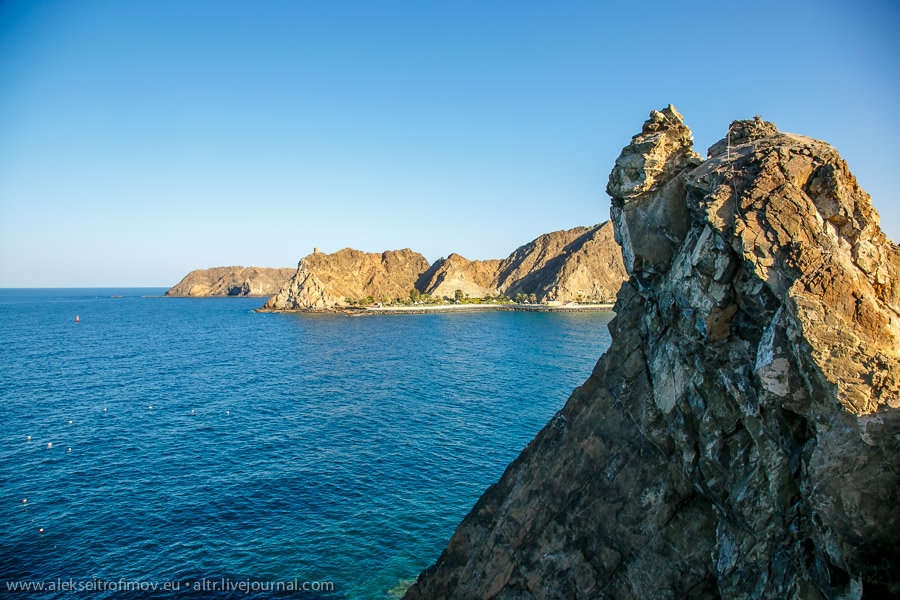 And back at Mutrah: 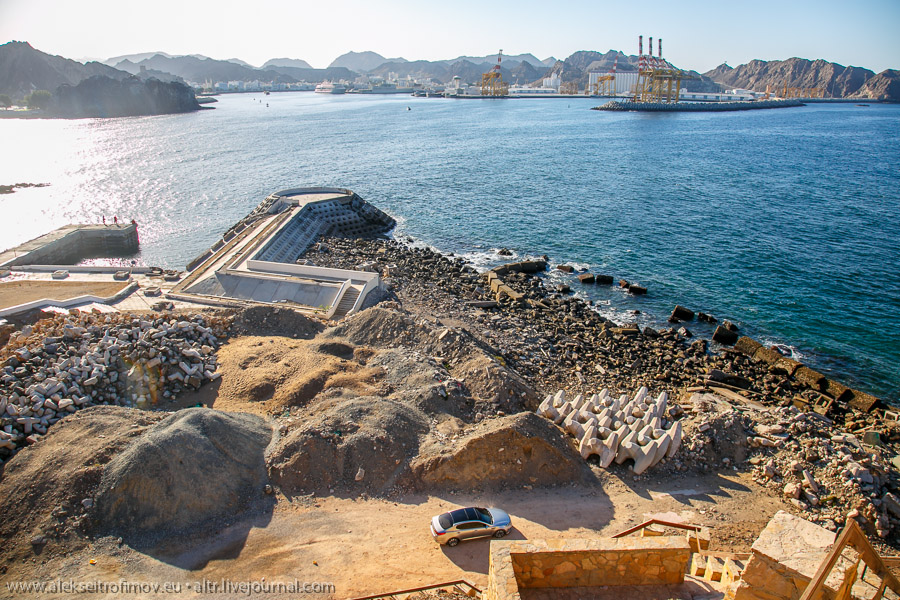 Finally after about 2 hours leisurely walk in the sun – the gates of Old Muscat. 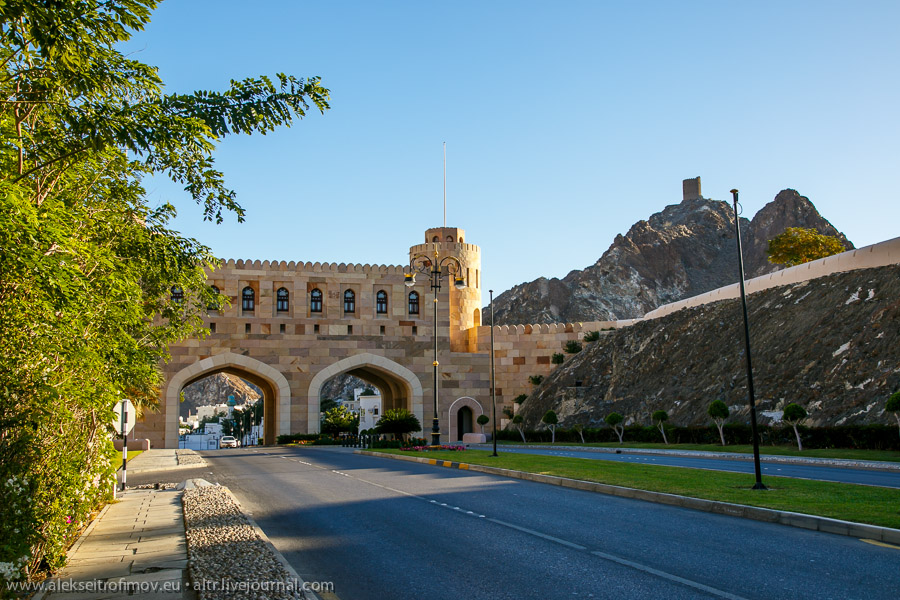 You can climb the gates and take a look at the old city: 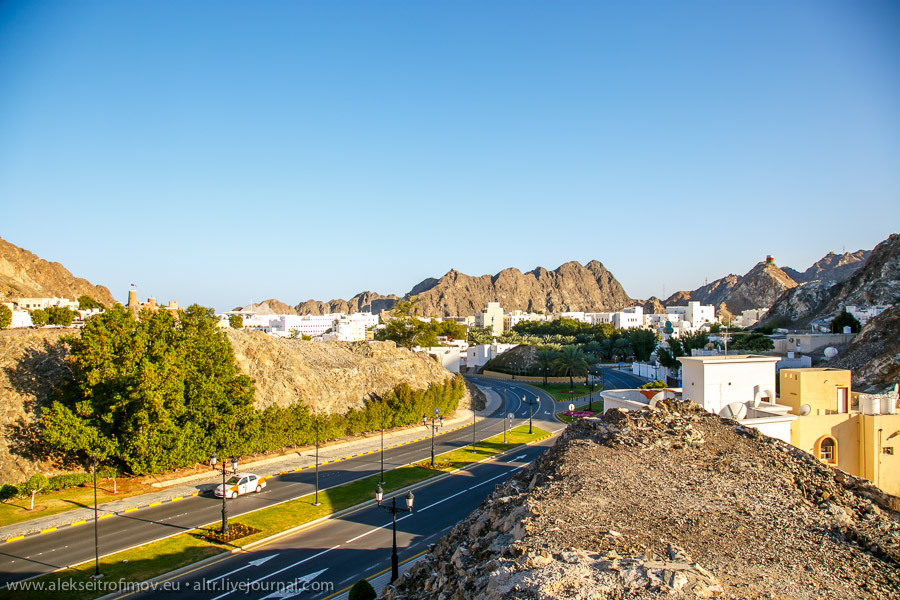 Actually there is a museum upstairs, but I never managed to catch it open. The doors look intriguing: 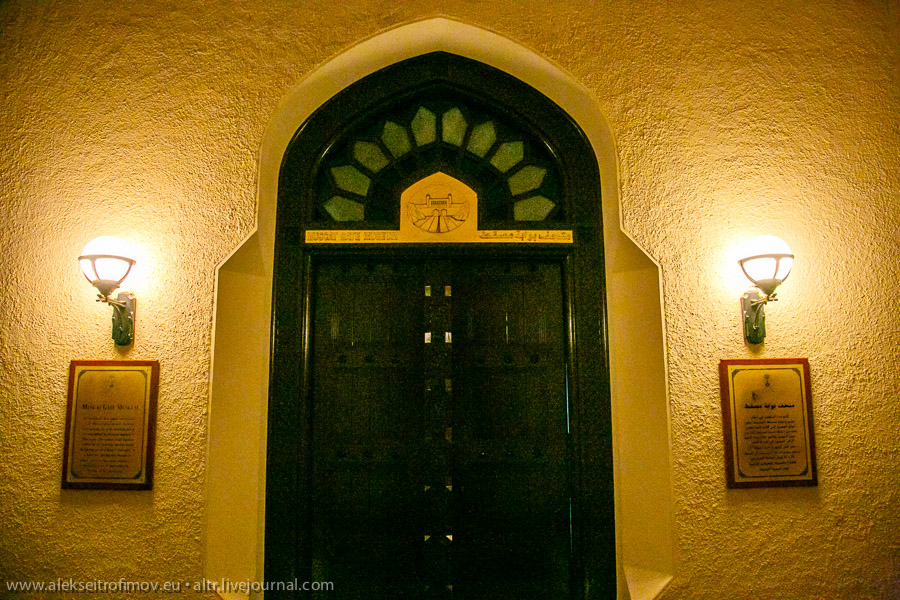 The main draw of Old Muscat is surely the Sultan Qaboos Palace. A first look taken from the main roundabout: 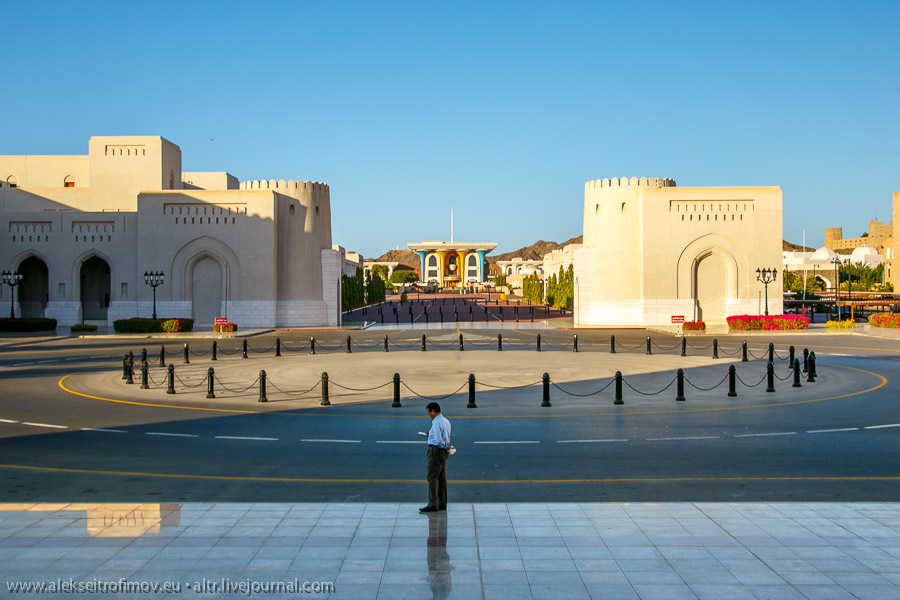 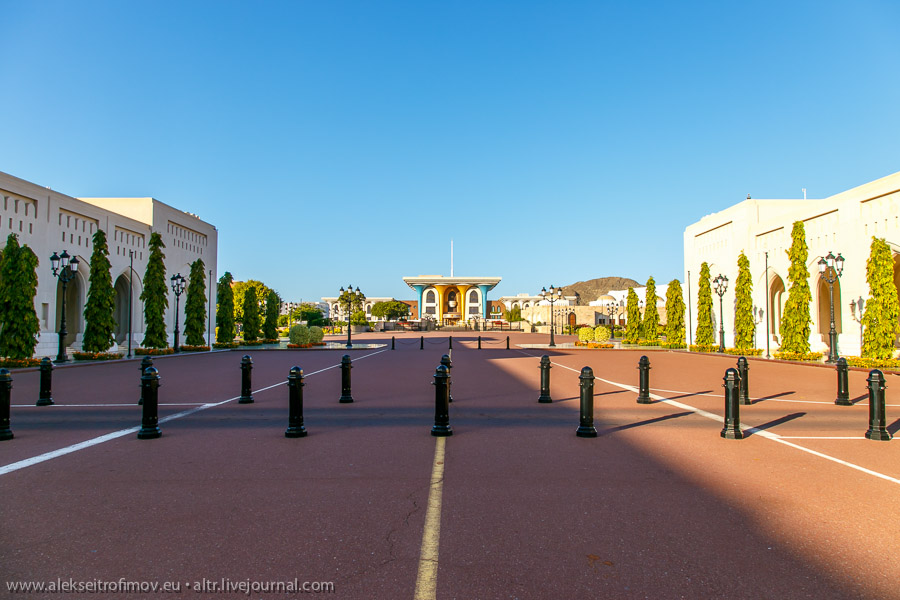 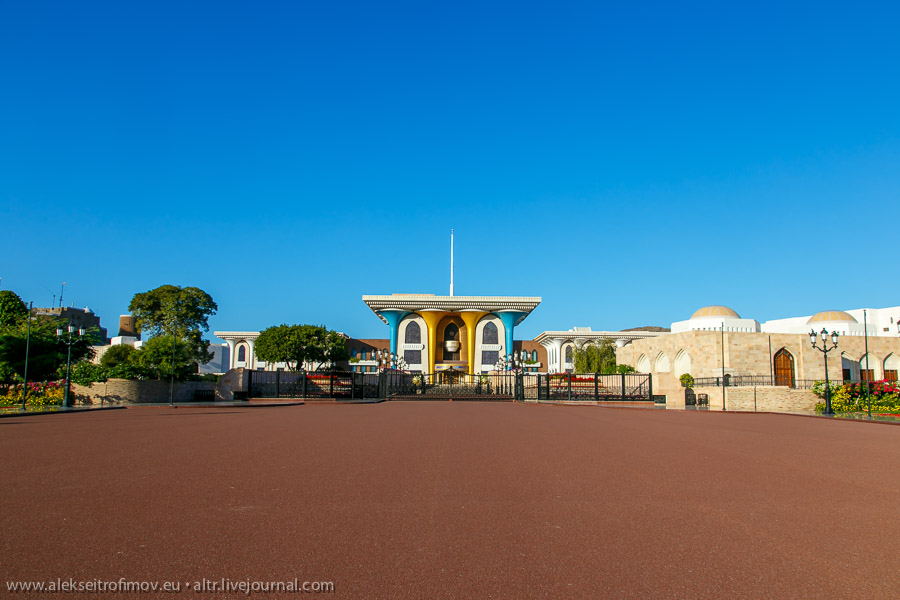 The palace was commissioned by Qaboos in 1970s, which is reflected in its retro inspired architecture. The previous sultan, the father of Qaboos, was an arch conservative. He banished all traces of modernity from Oman – no cars, no modern medicine, not even sunglasses were allowed to enter. Very few foreigners could visit the country. Finally in a bloodless palace coup Qaboos overthrew his father and embarked on a program of reforms – a very gradual one, but transformative nonetheless. This is quite a contrast to the Emirates which have embraced modernity with seemingly insatiable thirst, as well as to Saudi Arabia that seems proud of its backwardness. The Sultan is extremely popular. He is not married and has no children – it is an open secret that he is gay. Nevertheless he enjoys full respect and authority in his sultanate. He will probably be succeeded by one of his removed cousins in the male line.

The palace is therefore a signature building. For the Omanis in 1970s, it must have looked like a UFO that landed in the middle of Old Muscat. 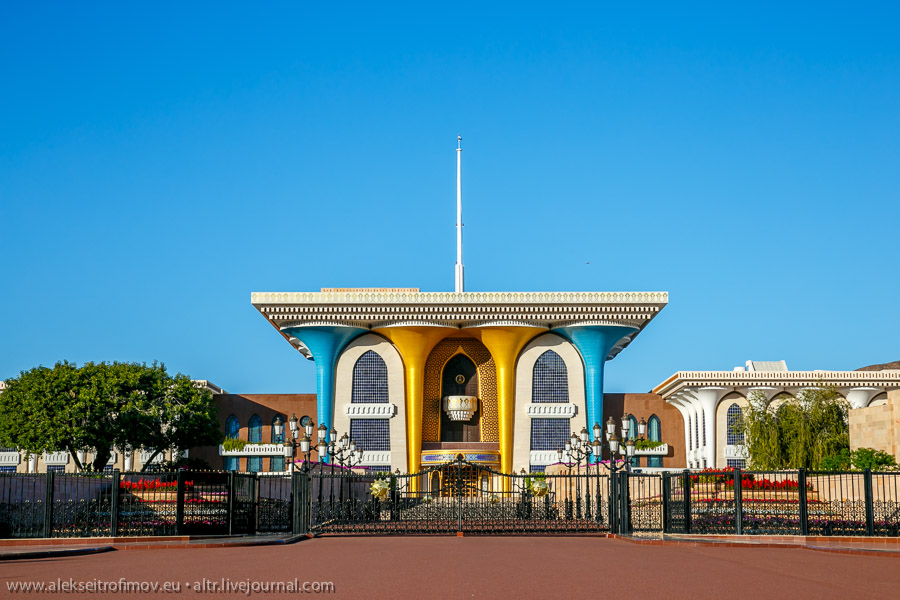 The exotic coat of arms of Oman, omnipresent in the country. I think it’s awesome. In the middle is the khanjar, a traditional Omani bent dagger. 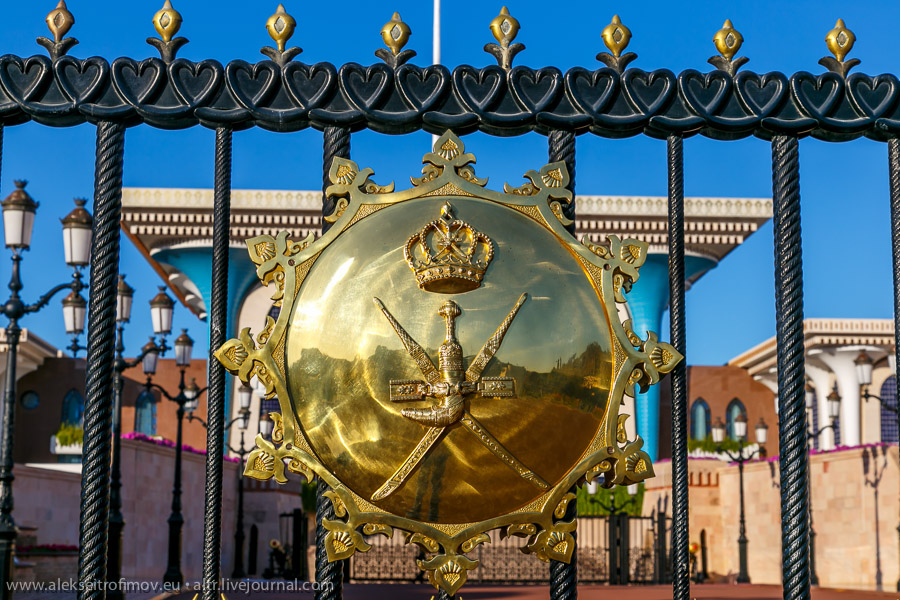 Looking back at the palace square. The Omanis are quite different from the other Arabs. Not only do they follow their own version of Islam, the so-called Ibadi faith. They are much less corroded by the wealth and the extreme consumption boom. These are proud but very friendly and hospitable people. You notice it on every turn – they greet you on the streets with a smile, they stop to help you find your way – no money needed, just so. They are also very handsome – you can see the mix of the Arabic and the black features. No surprise, given that for centuries Oman ruled East Africa! 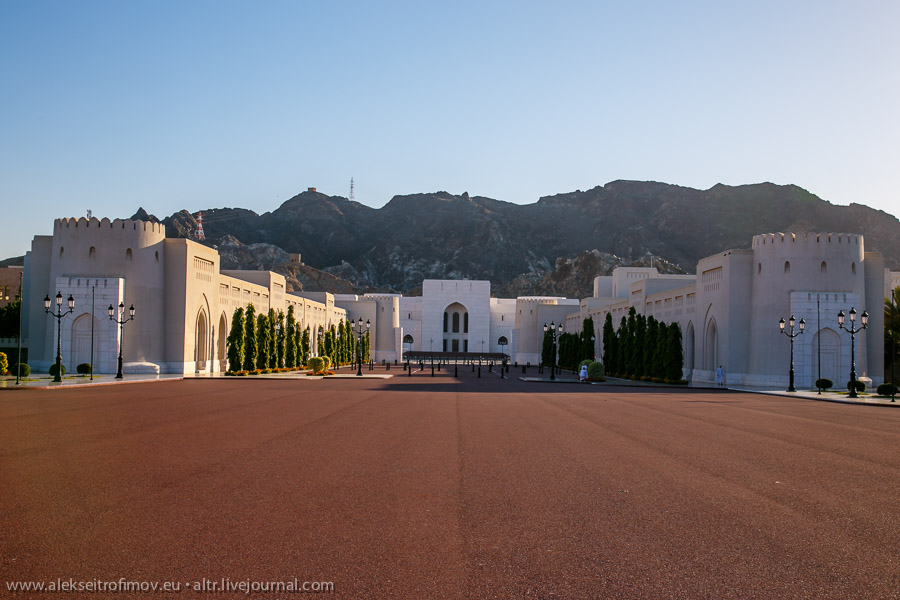 After marvelling at the palace, I headed for Bait az-Zubair museum. Very tastefully curated, more like an art gallery, it speaks of various aspects of Omani life and culture. 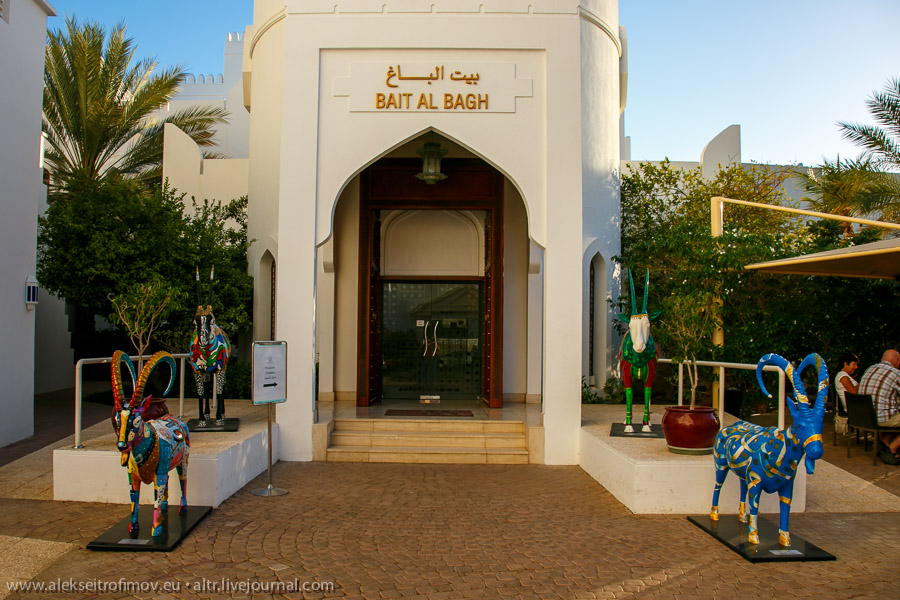 But I liked the most the museum café, choke full of various art books – extremely well chosen at that! I must admit I got stuck in that café for some four hours. It is situated in an old Omani house and of course offers a great latte. But the books! The contrast between the exotic city and a cutting edge art literature couldn’t be starker. 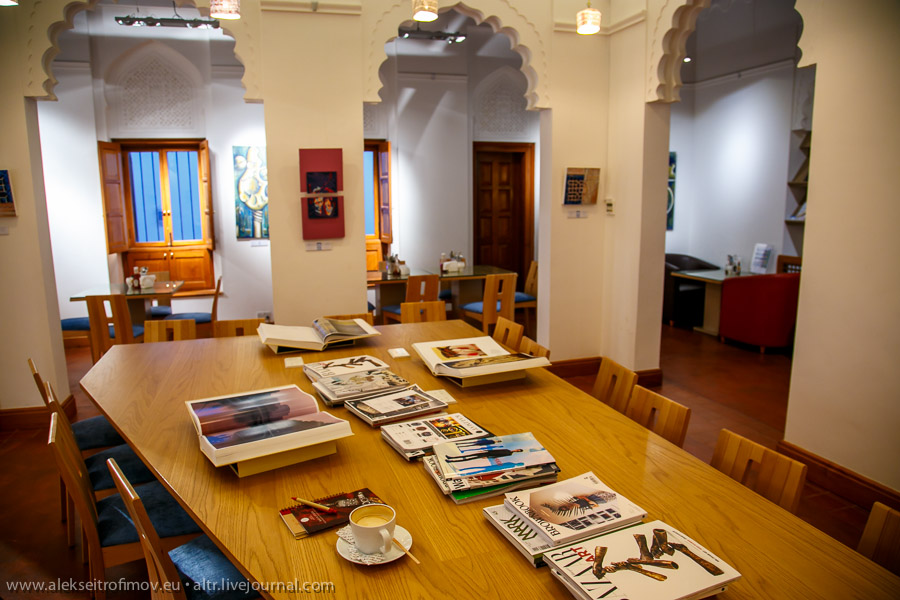 As the museum café closed, I discovered that the darkness had already fallen. I walked back. The Sultan’s palace by night: 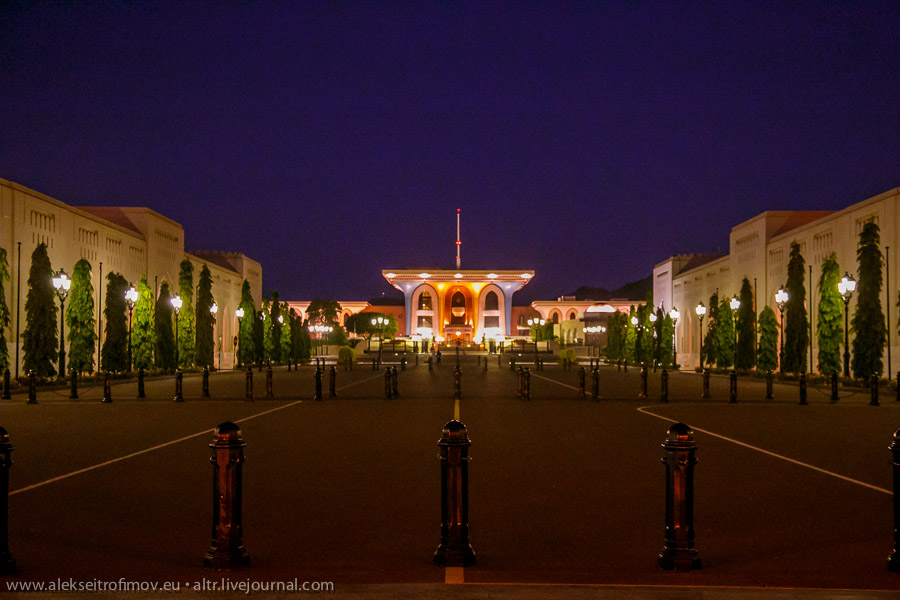 A mosque next to the palace: 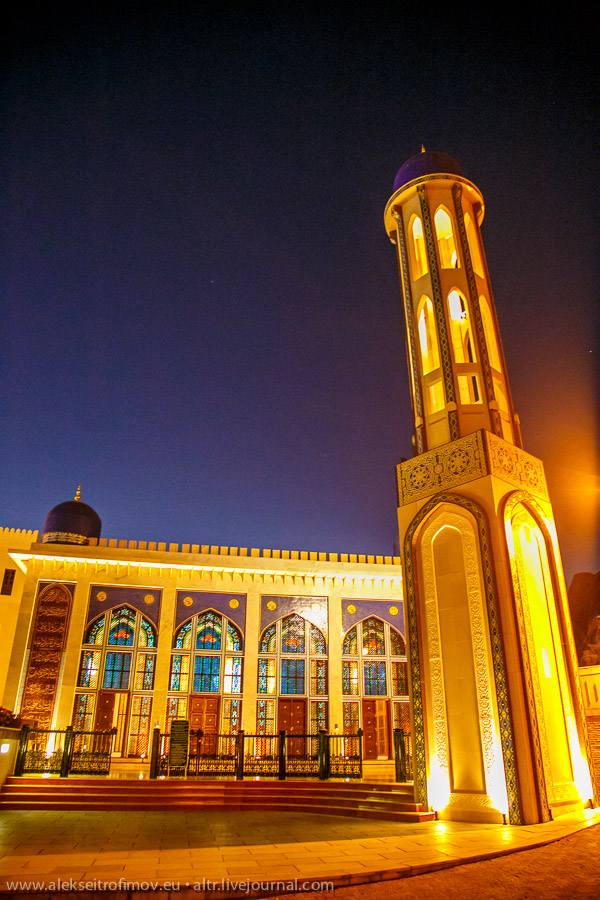 Another Portuguese fortress, right above the palace. Fascinating to roam the empty streets. 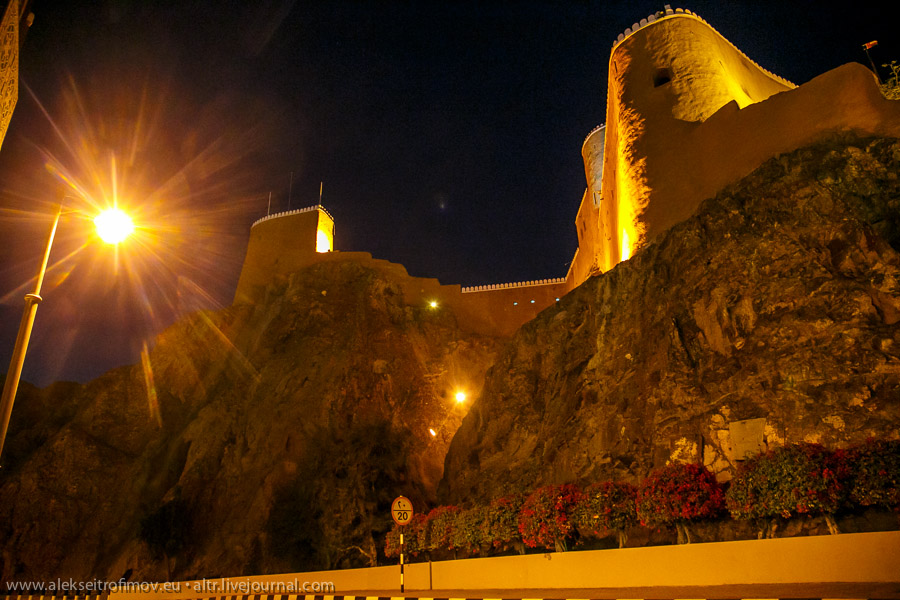 A mysterious looking palace from the Old Muscat seafront: 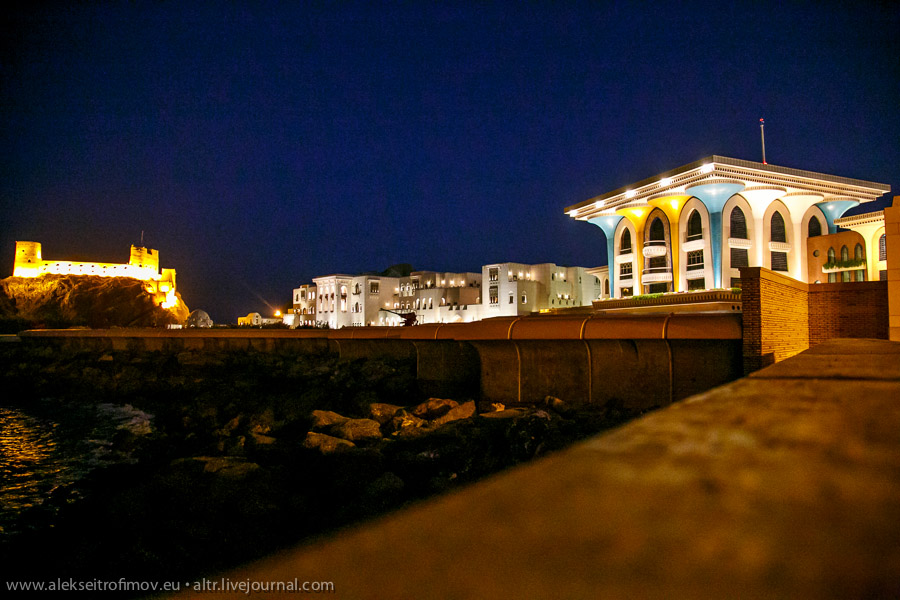 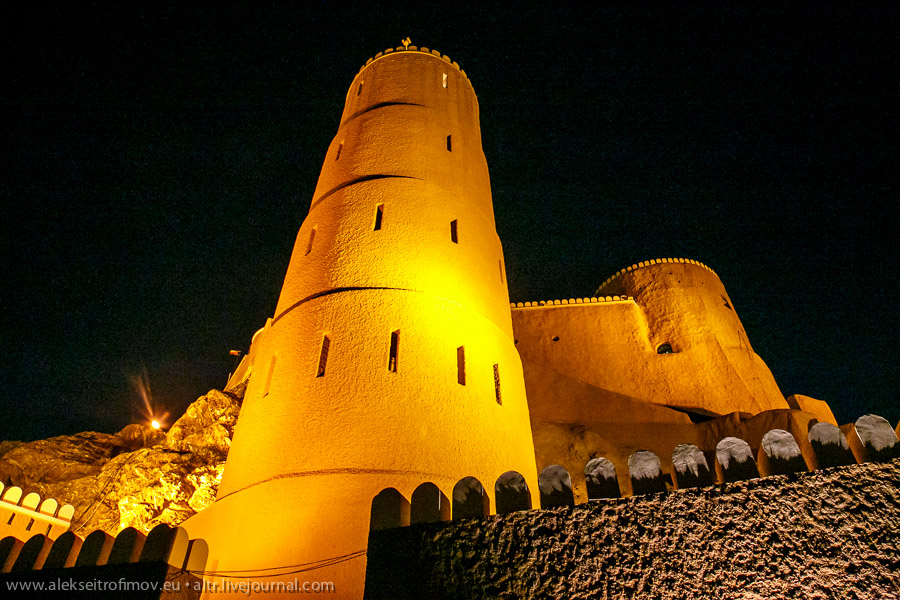 Through a tunnel in the hill I returned to the Mutrah seafront and to my hotel. The next morning I was to discover the rest of Muscat.

2 thoughts on “Old Muscat, the fairytale capital of Oman”