On the last day of our cruise the crew organised a “meeting with the captain”. It was a truly fascinating hour during which the captain, his first mate and a third officer answered all kinds of questions from the audience. For example we learnt that our ship (“Jewel of the Seas”) does not all the time travel in circle in the Caribbean from Puerto Rico to Puerto Rico. Rather, depending on the season the ship will go to different corners from the world. In summer it’s in Alaska, in the fall it’s in the Mediterranean, at some point it even goes to South East Asia. When asked which of the places on the itinerary were his favourites, the captain to my surprise said it was Grenada.

Grenada is the last, i.e. Southernmost island in the Antilles archipelago. Further South is South America with its satellite islands.

Grenada is marketed as the Spice Island due to a huge choice of spices available here. As for me, I knew it mostly as the island which was attacked by Ronald Reagan. 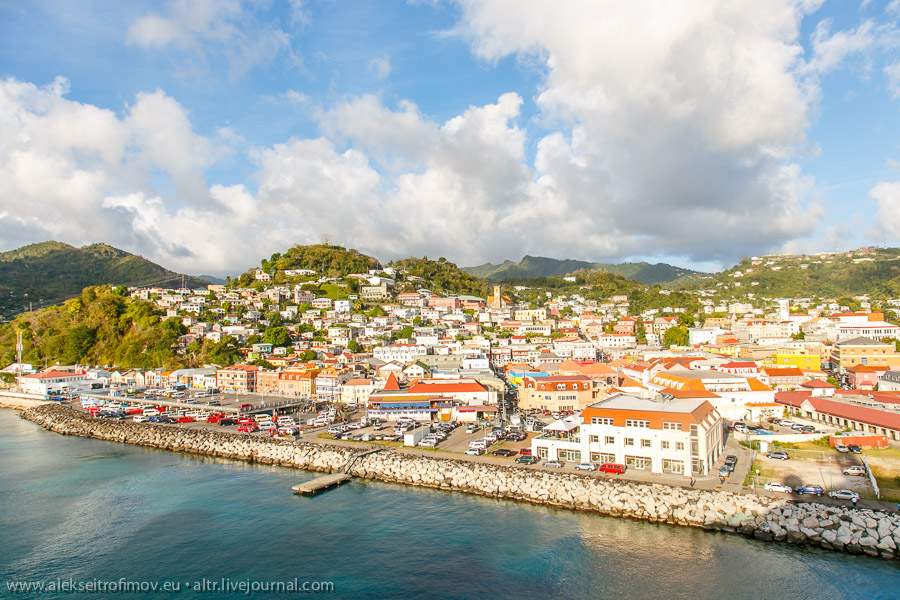 The capital is called St George’s and is mostly on the hills. The cathedral: 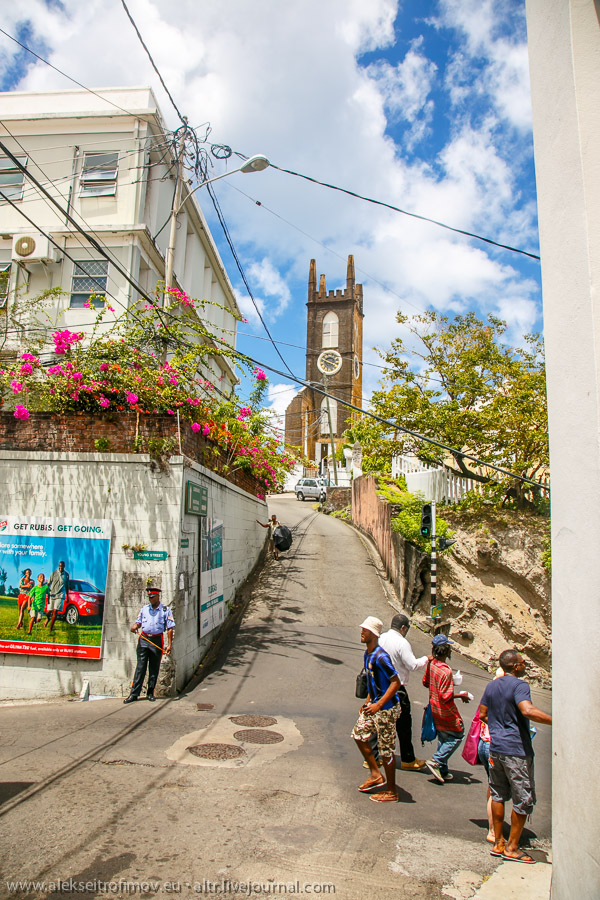 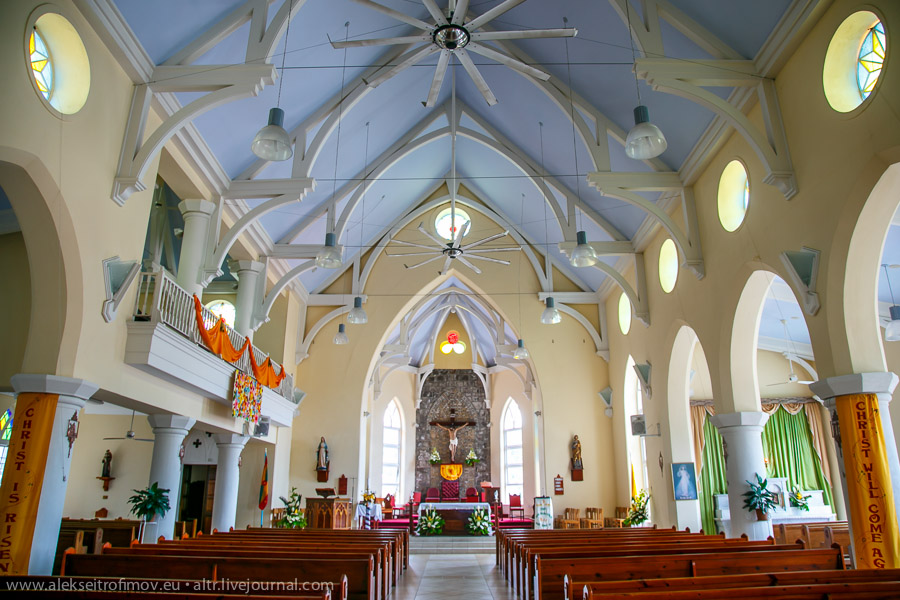 You go up and down all the time. The population of St George’s is 3 thousand. 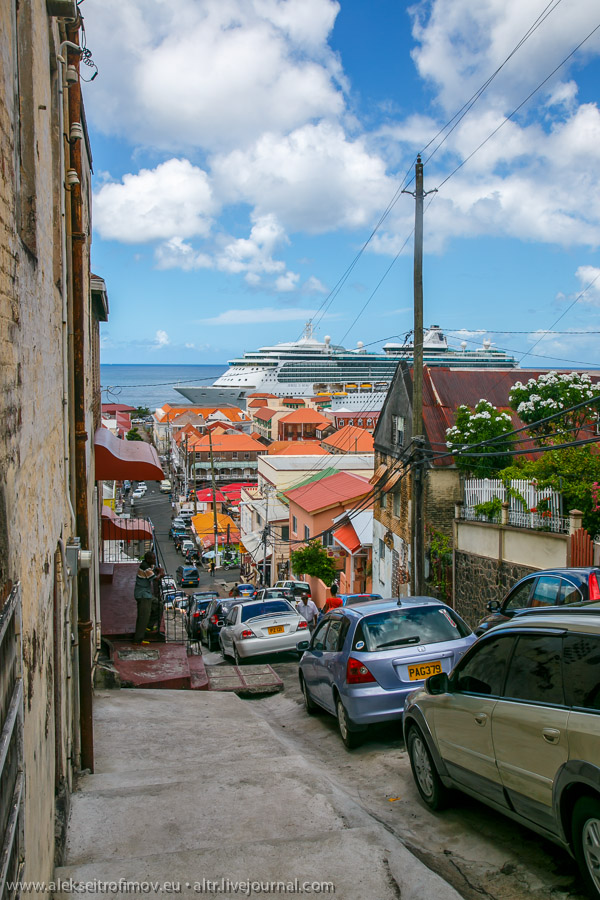 In 2004-2005 two major hurricanes hit the island. There are still buildings in the centre of St George’s that haven’t recovered from that. 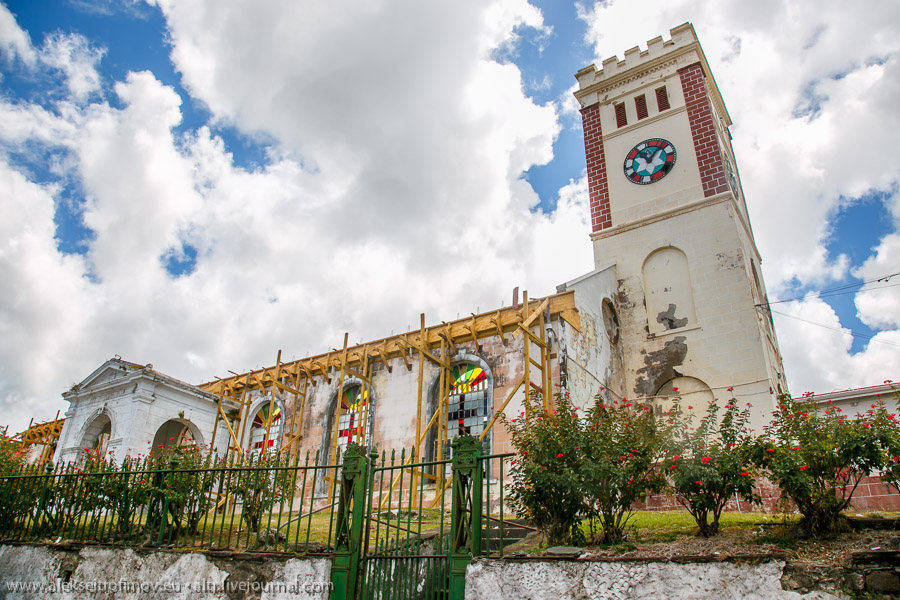 I was particularly interested to learn about Grenada’s history so we visited a local historical museum. 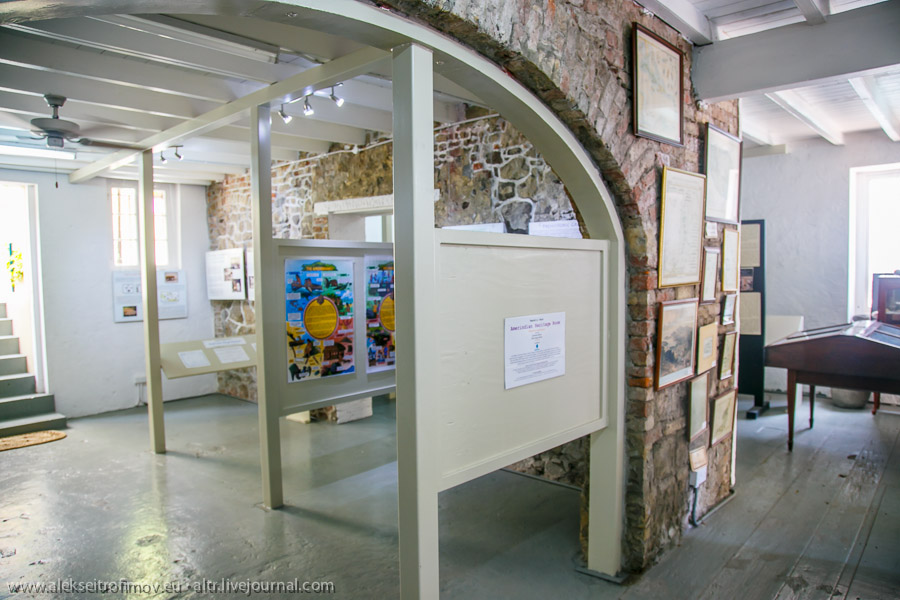 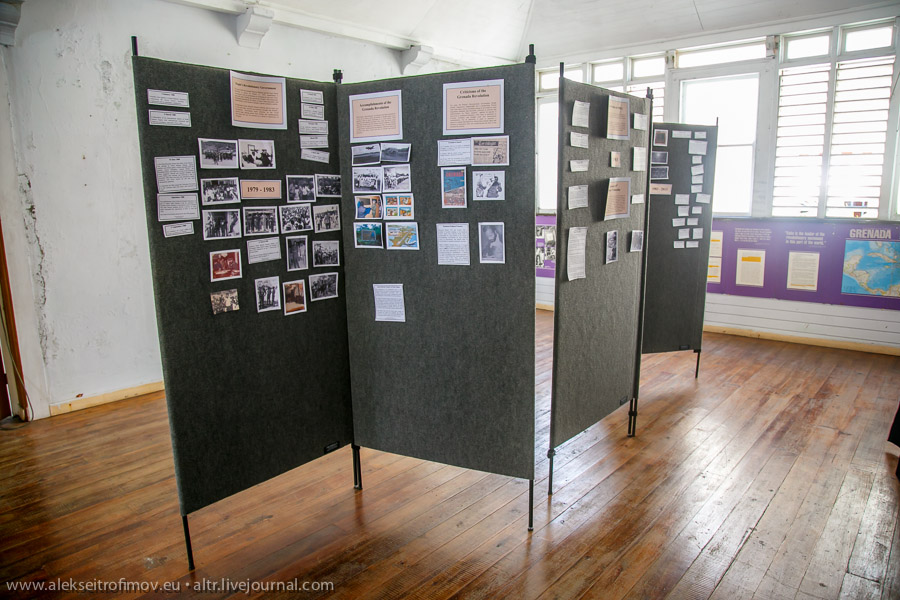 What is controversial? Grenada obtained independence from Britain in 1974. In 1979 a revolution took place which got into power the New JEWEL Movement. It was a left wing party which incorporating ideology of “black power”. The new government was quickly at odds with the USA, consequently it turned to Cuba for help and eventually oriented itself in Socialist direction. 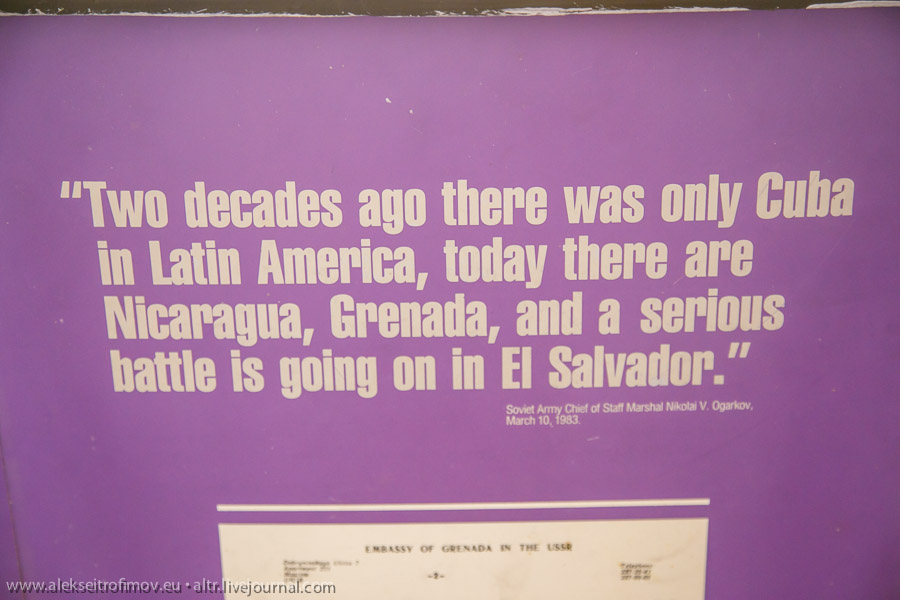 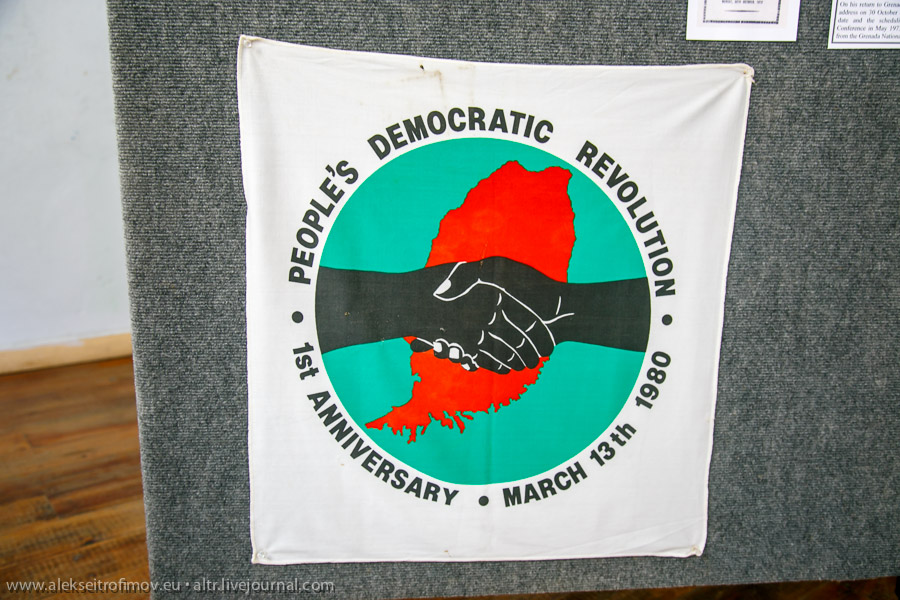 As often seems the case with left wing revolutions, there were significant personal tensions within the movement. In 1983 the leader of the revolution Maurice Bishop was removed from power by his former subordinates. In some dramatic sequence of events, Bishop tried to take power back heading a crowd of supporters, got arrested and – in a shock to to all – executed by gunfire. The new leader took an even more radical leftist position. Six days later the United States invaded Grenada (declaring rather absurdly that Grenada was a threat to USA), removed the government and installed a friendly regime.

To this day in Grenada these events are seen as controversial. However the international airport here is named after Maurice Bishop, who is officially considered a national hero. 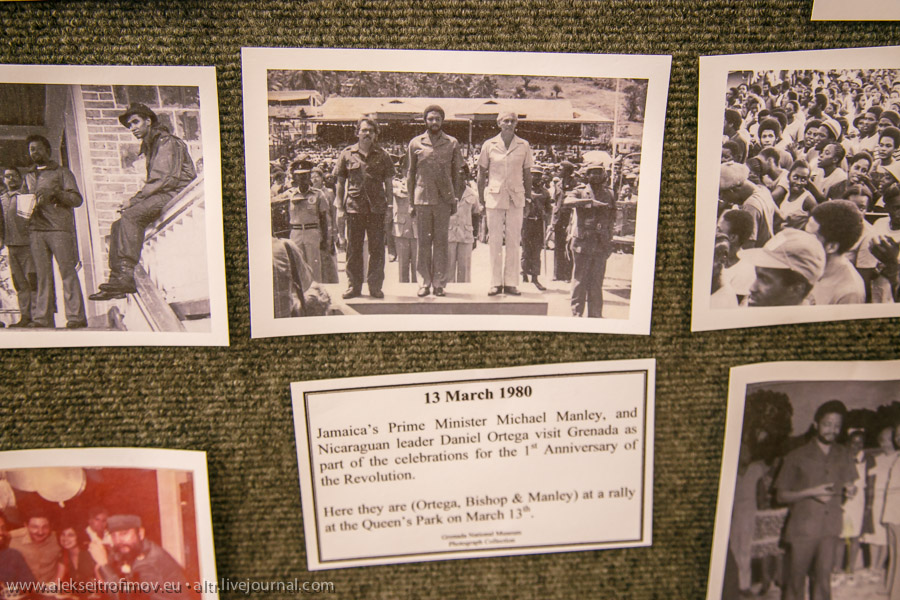 The semaphore on the main square of the town. As we can see, no economic miracle transpired here despite a capitalist economy. All the cafés advertise “free wifi” to tourists. But very quickly we found out that actually it’s a local telecom hotspot open to all. 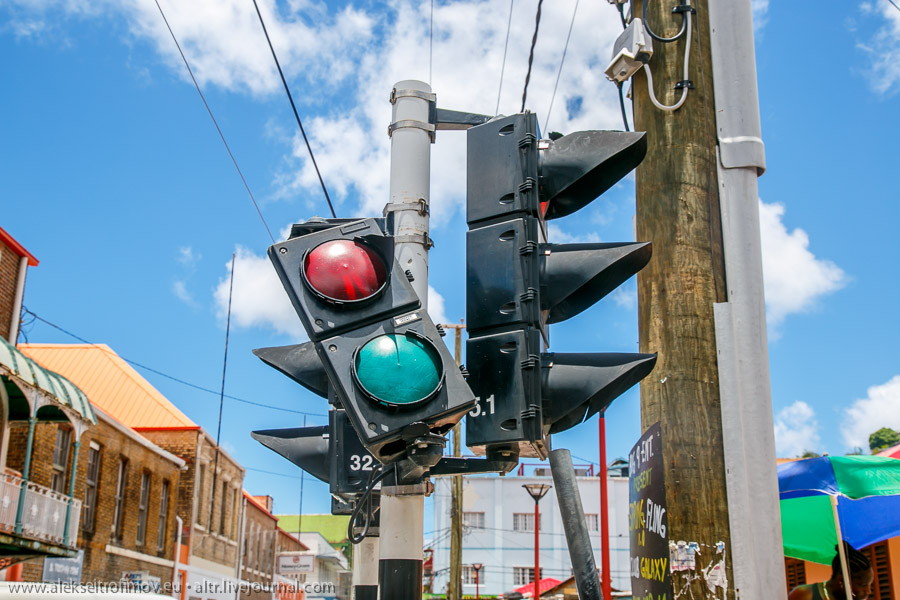 A key intersection in the townscape – the tunnel through the hill which leads to the harbour. 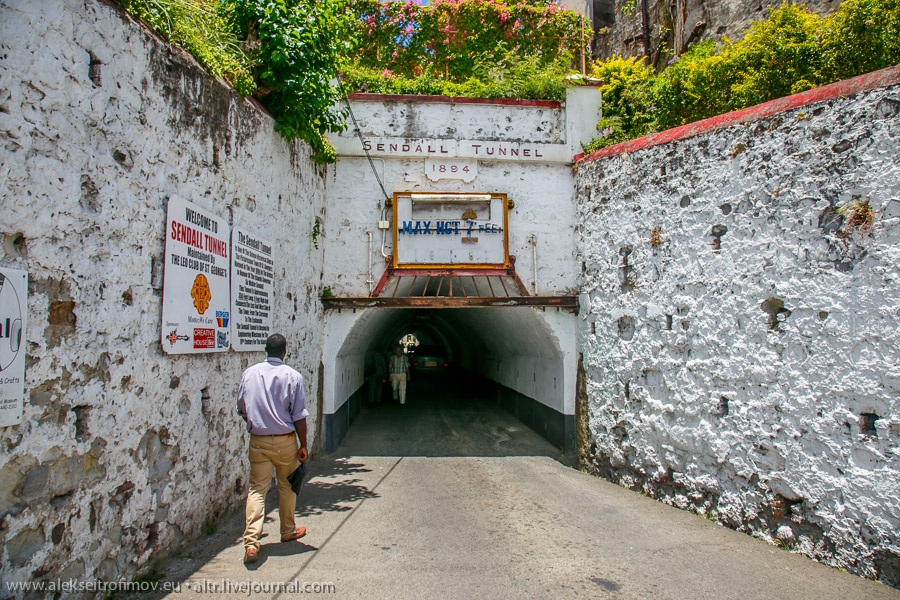 Carenage is the most atmospheric area of St George’s. It’s a harbour to the East of the centre. 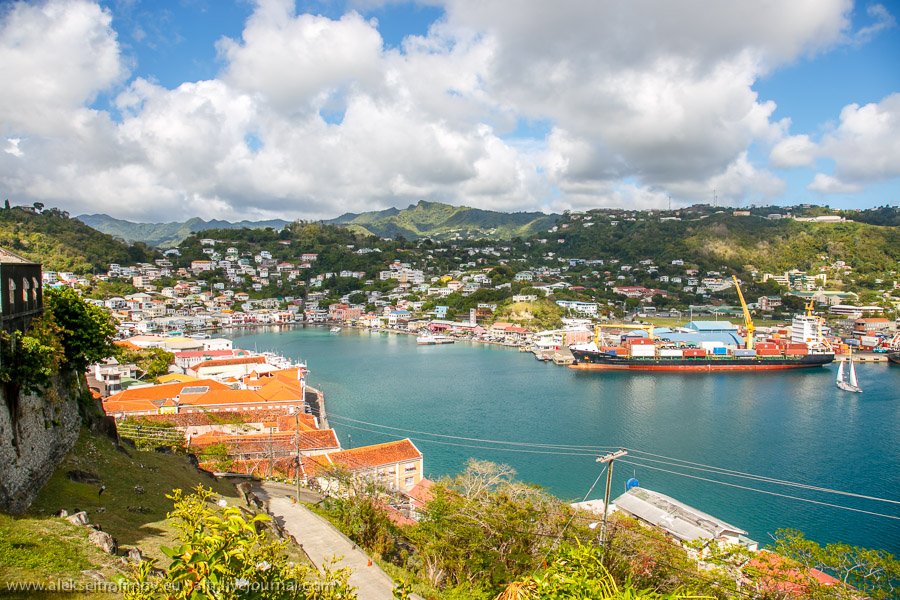 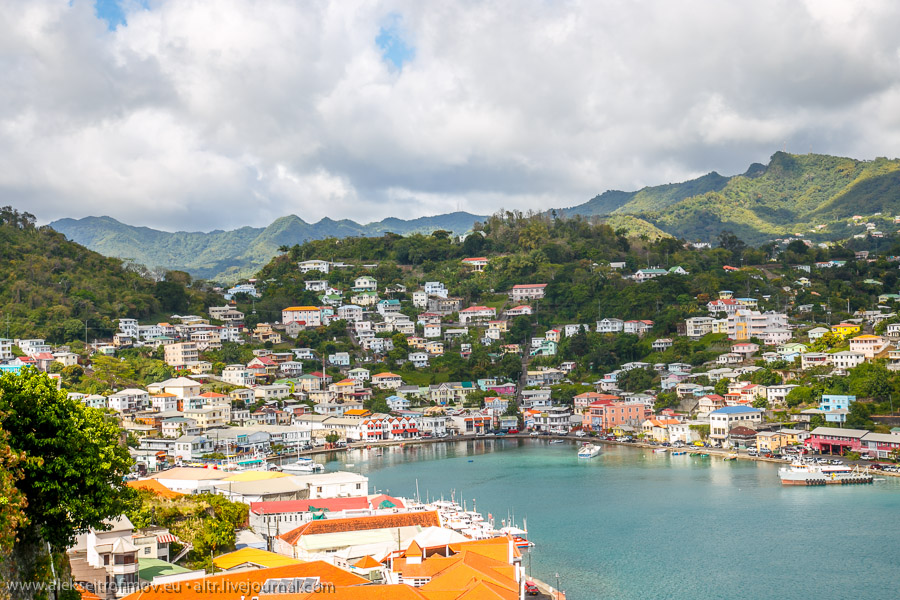 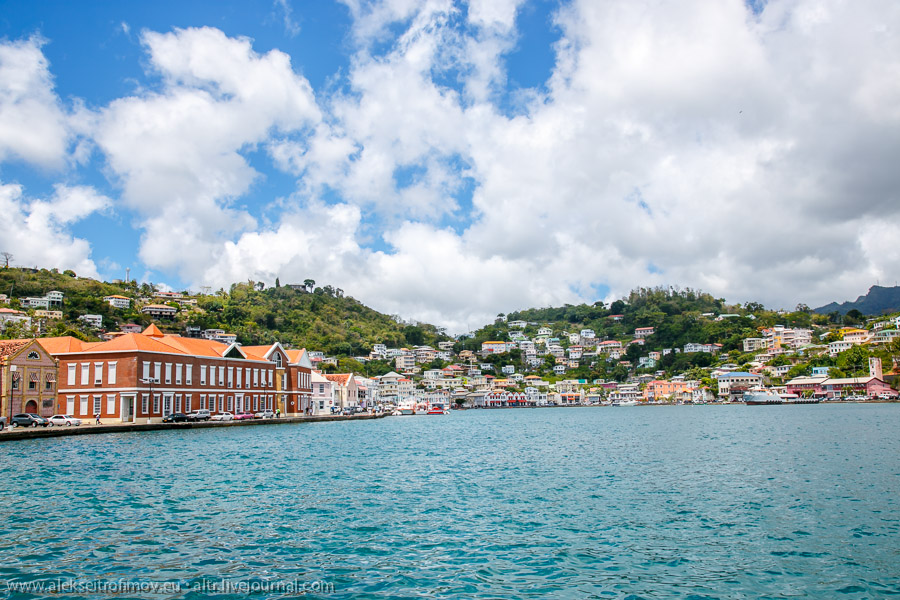 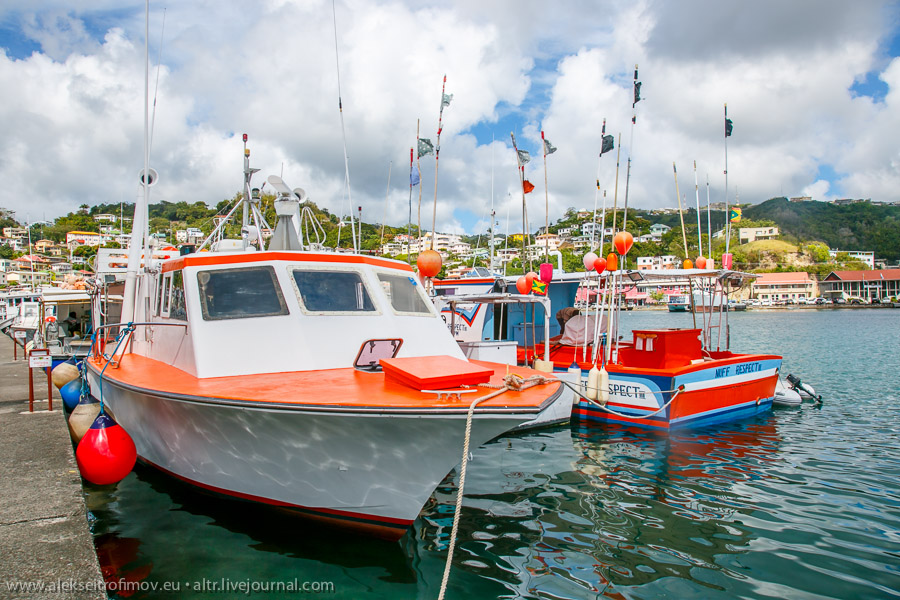 Sophisticated restaurants line the waterside around the harbour offering a view to die for. 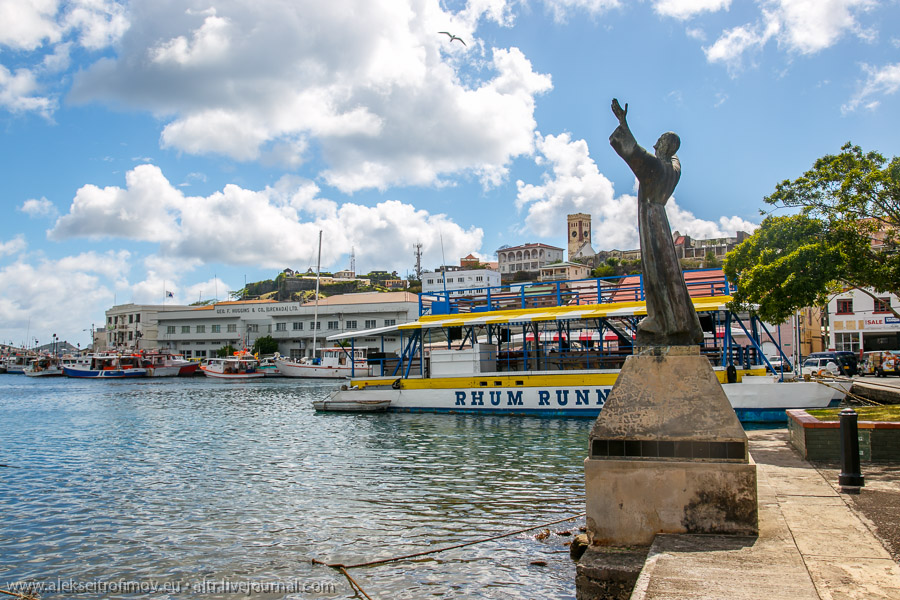 I climbed the hill which separates Carenage from the town centre. On the top of the hill is located Fort George which guarded Grenada in the old days. 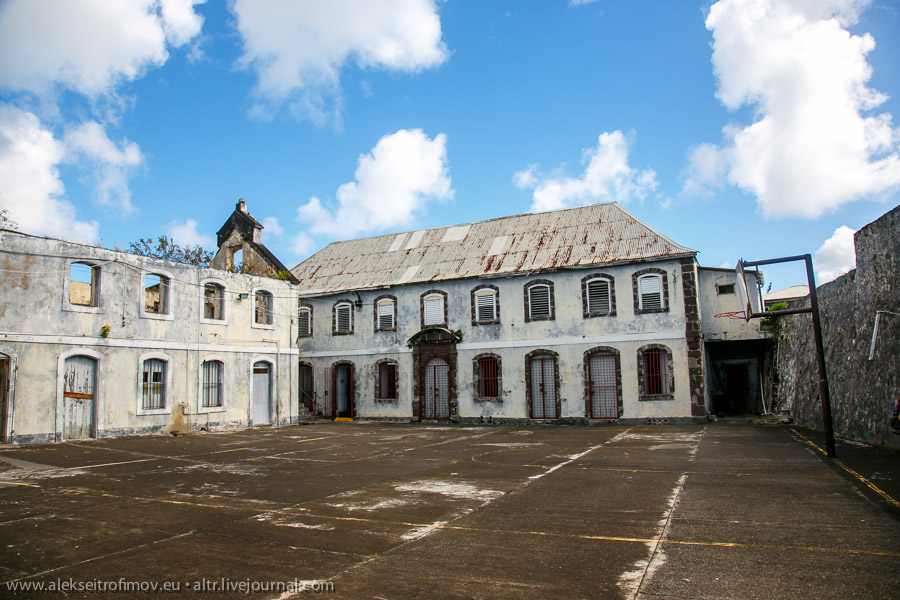 Our ship from every possible angle: 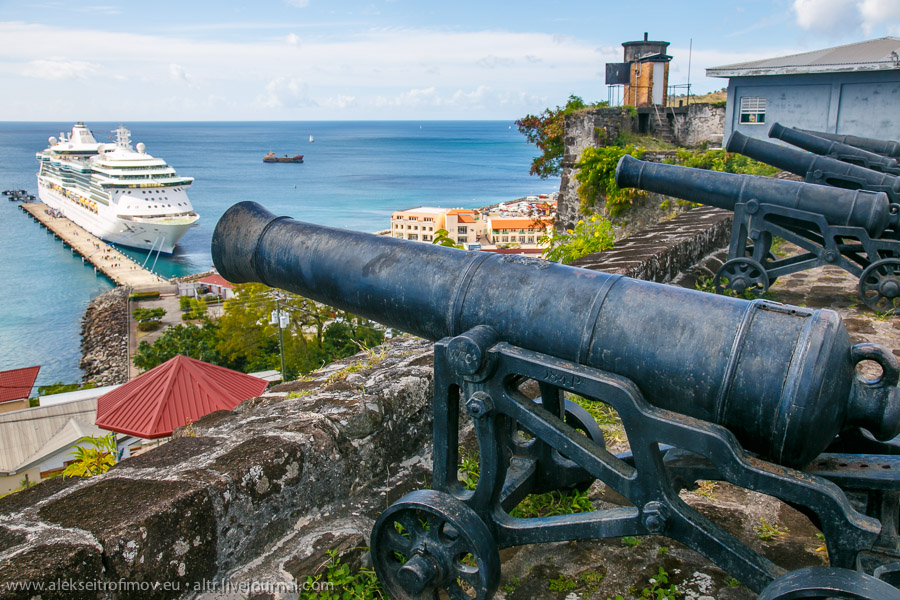 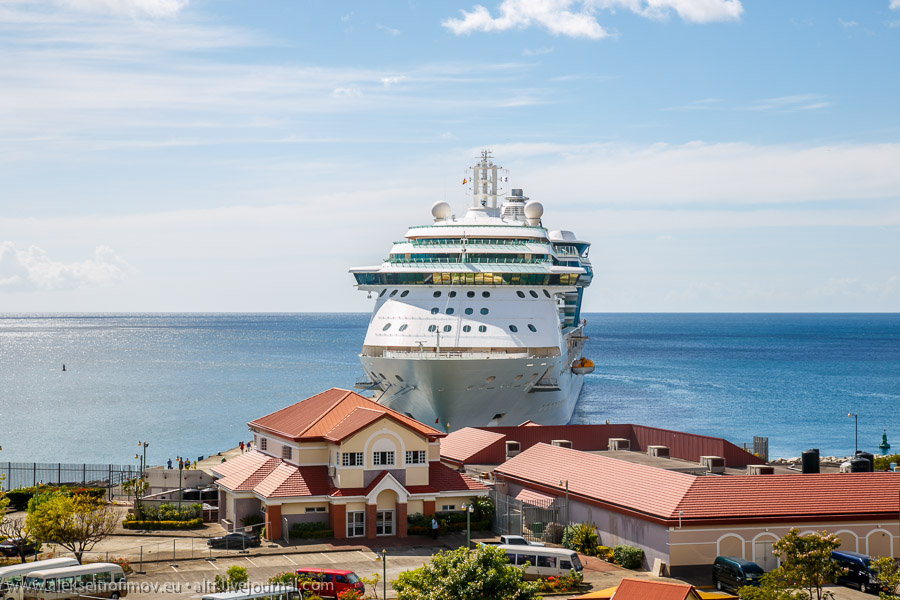 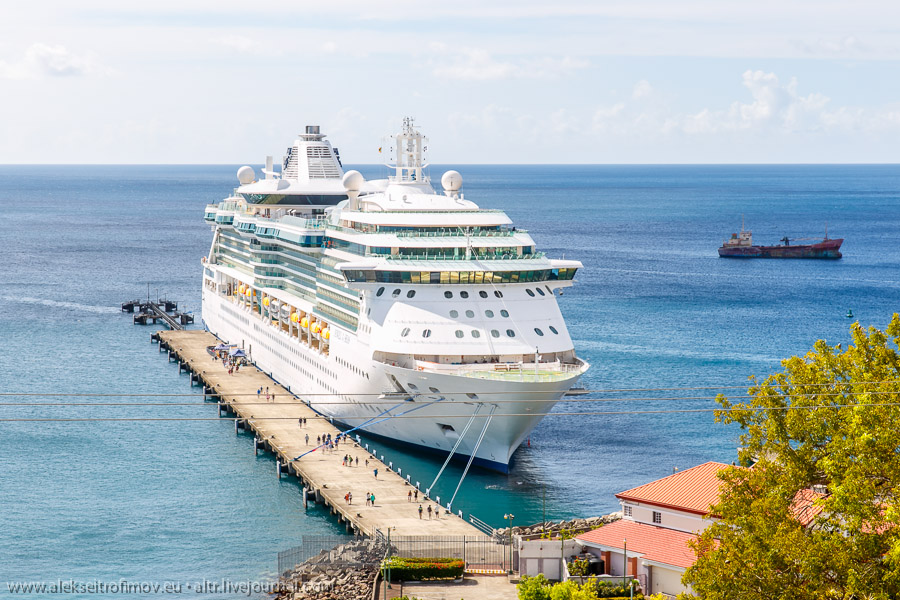 Spices are sold in everywhere on the streets. We checked out a few – they are prepared with sugar. Our day in Grenada flew very quickly as we realised it was the last island in our cruise. And soon we depart it. For this occasion the captain opened the helicopter deck and drinks were served there. 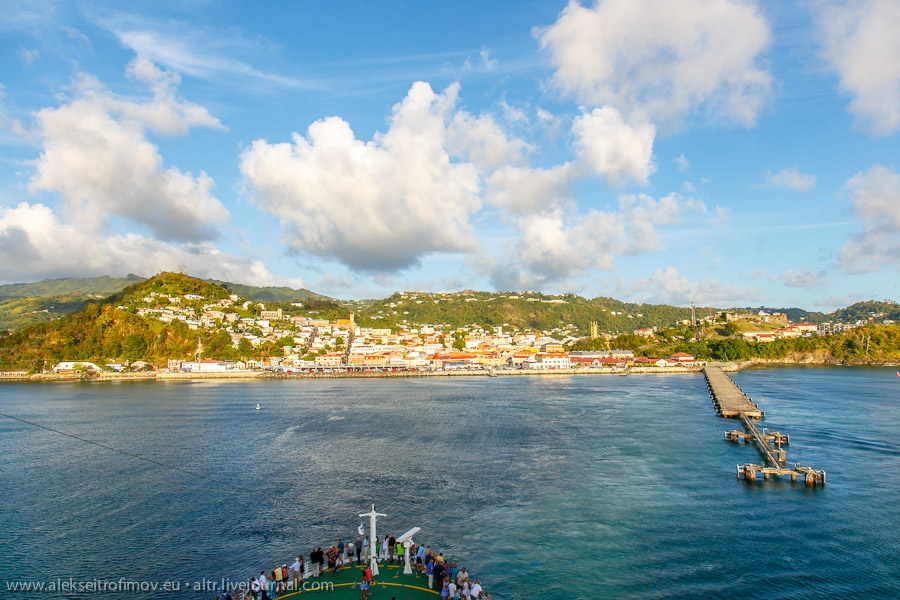 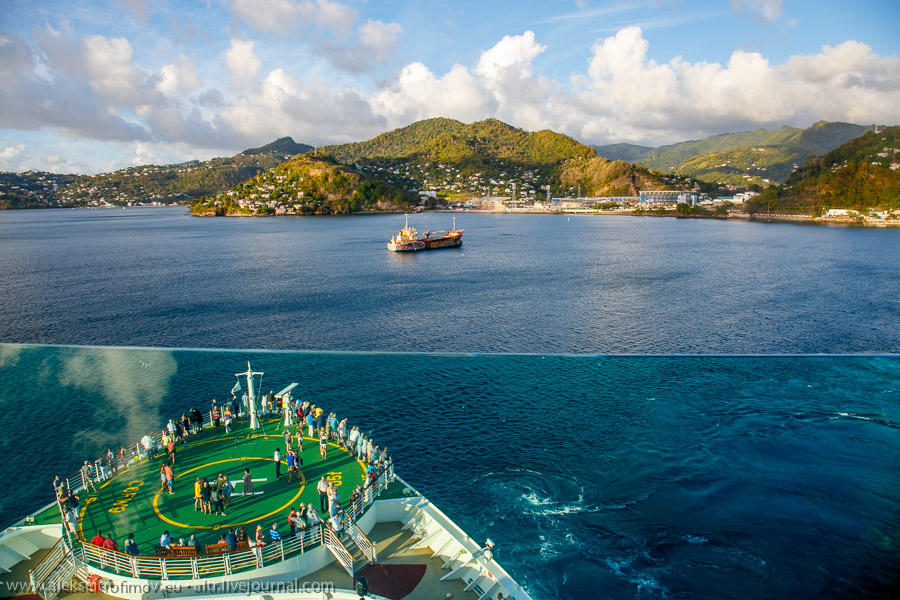 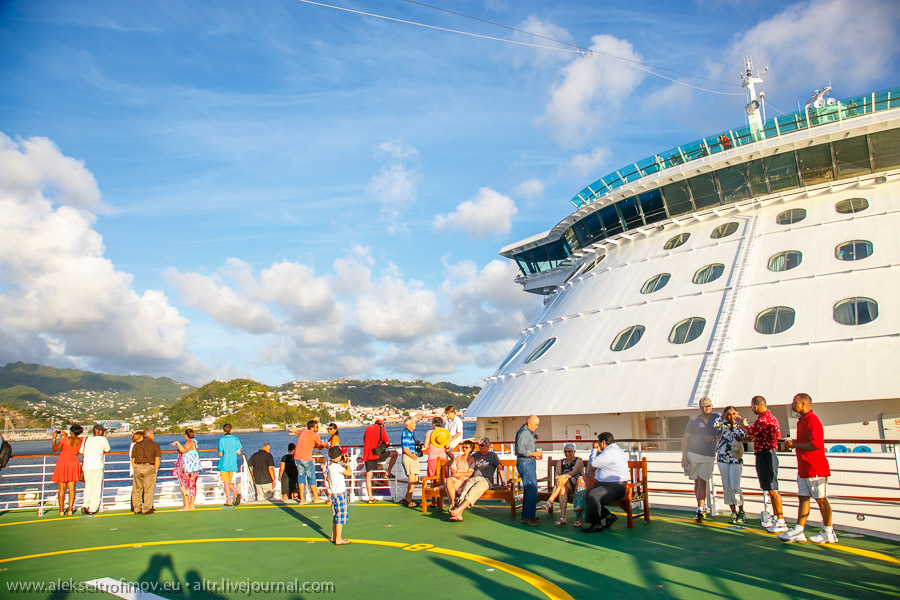 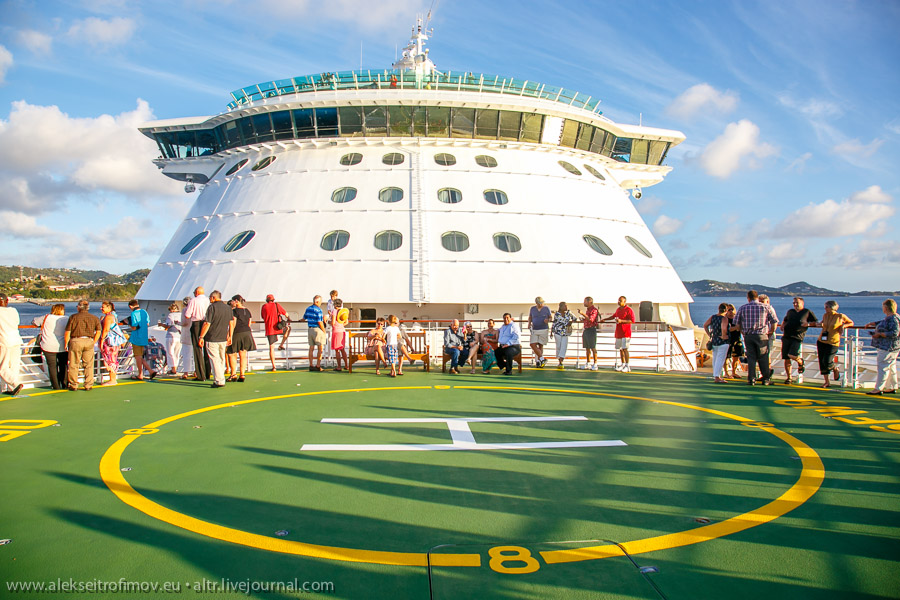 To conclude the cruise, some photos of our ship. This is how we saw it on the first day as we boarded it in Puerto Rico: 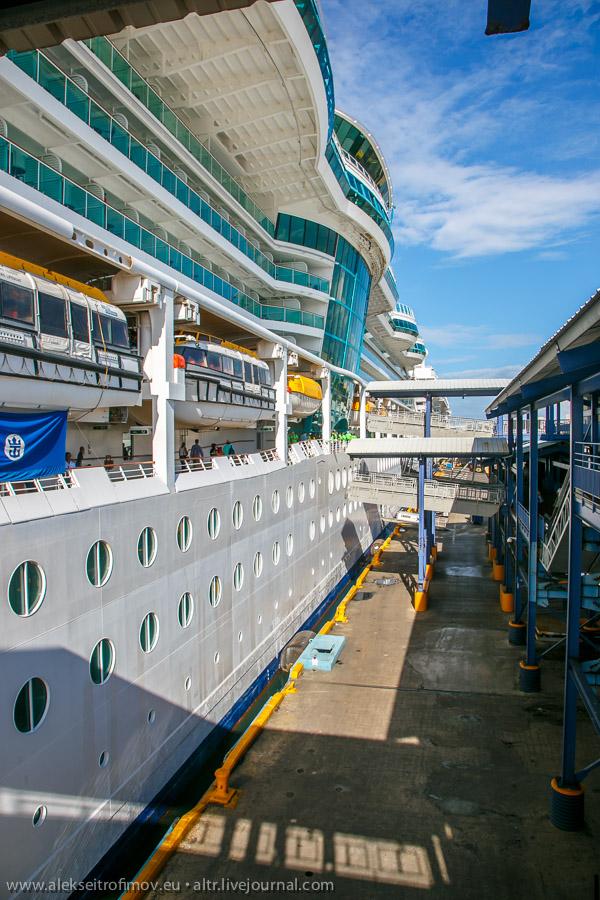 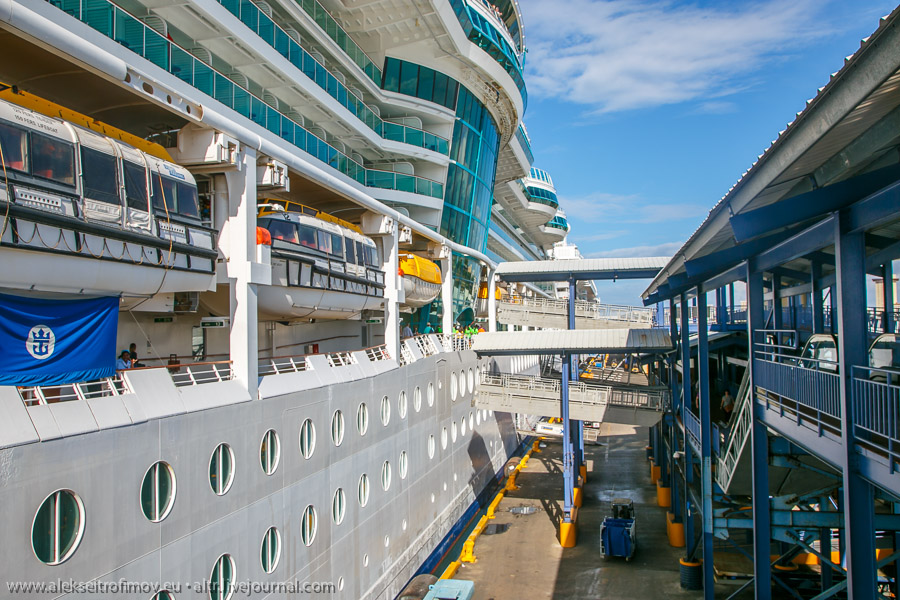 In addition to gorgeous views, the top deck features offers several pools and a tanning beds. To be honest, we never used either of those. 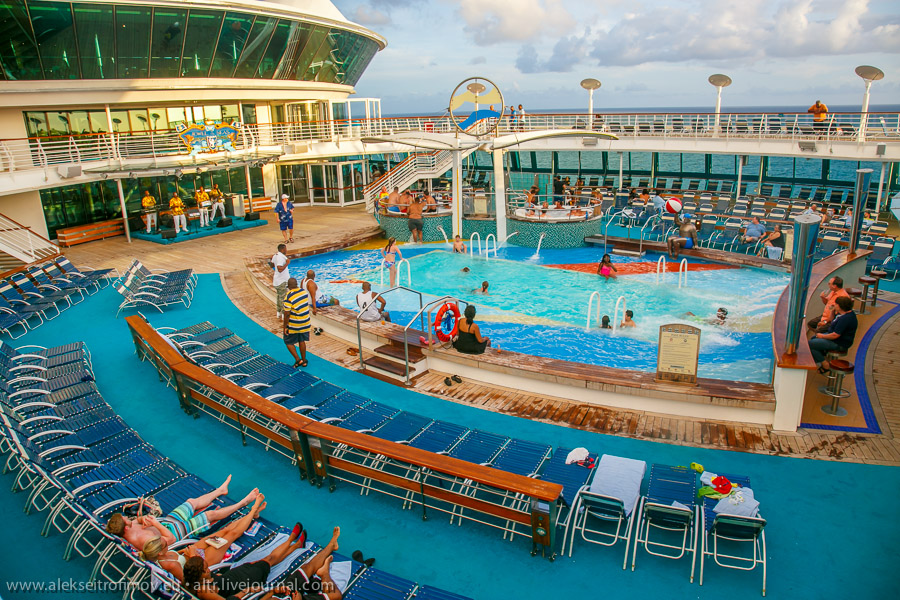 There is a concert hall on the ship offering performances every night of the cruise – we saw some bits and pieces and found it sufficiently entertaining to return. Various events and performances are organised in other spaces too. To get to the concert hall, you have to pass through the shopping area as well as the casino where we won some chips. Finally, we visited an art auction – chiefly for the free champagne, but the action itself was fun too! 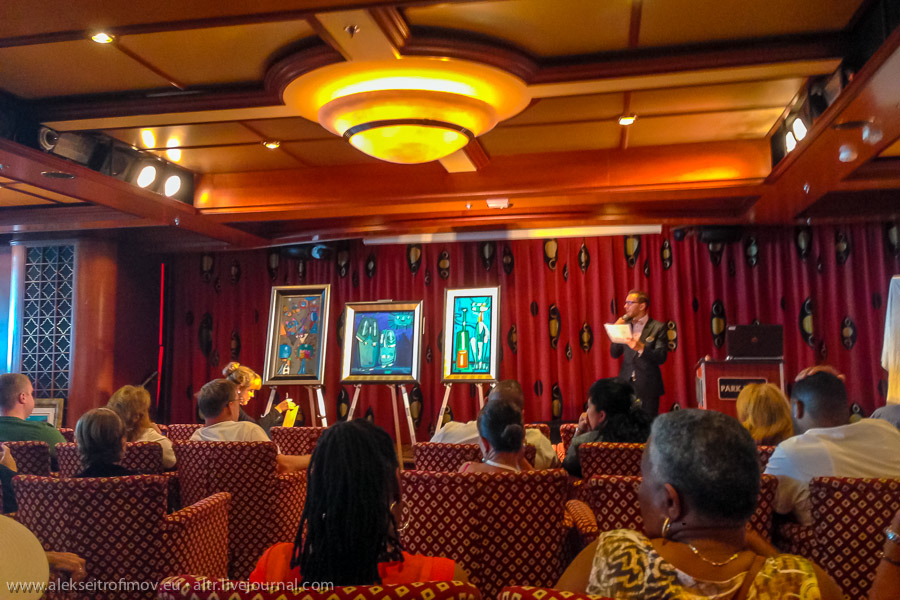 Farewell, Jewel of the Seas! 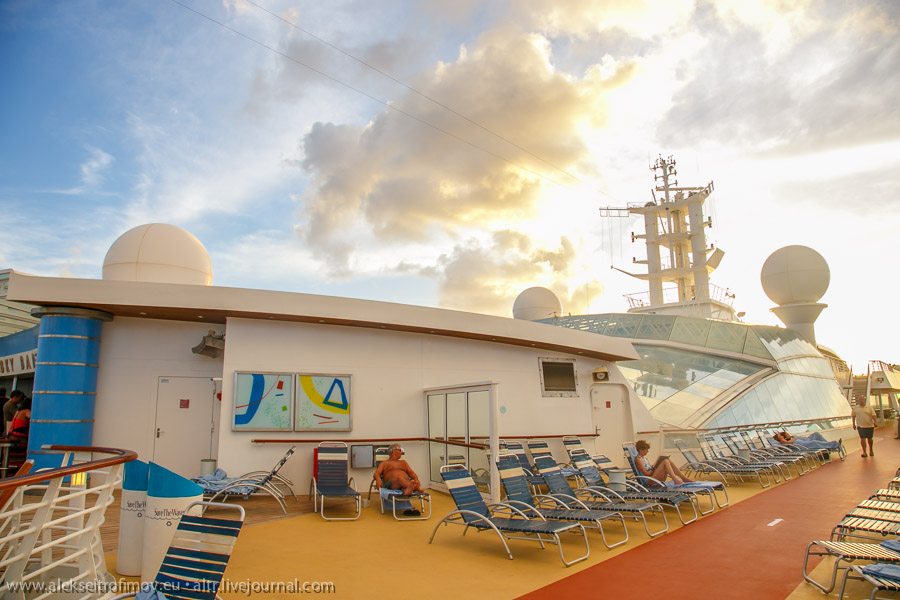 3 thoughts on “The last island of the Antilles: Grenada”