END_OF_DOCUMENT_TOKEN_TO_BE_REPLACED

I am writing this on Easter Island. So it goes with this diary that I write a post about a particular place about two weeks after I was there. This is because it takes me some time to process the photos and to upload them to the website (which is often a challenge considering how slow internet is at times in Latin America). But also it is because it is somehow easier to write at some distance, as if being certain that all of the experiences of a place are by now exhausted.

That’s why I write now about Colonia, a small town in Uruguay located right across the bay from Buenos Aires. Still to come are several stories about Mendoza – a city at the foot of the Argentienean Andes, about 2/3 of the way from Buenos Aires and Santiago, as well as a city trip to Santiago itself. And only then I will come to Easter Island.

Going back to Colonia, or very solemnly Colonia del Sacramento, I came there for two days, having decided to take a break in urban exploration of Buenos Aires. It is very easy to do, the ferry only takes an hour and a bit. Last year I already visited Montevideo, which is a pleasant and calm place, deserving several days, and so this time I decided to visit another corner of Uruguay.

Colonia del Sacramento was initially founded by the Portuguese. Their idea was to create a counterweight to Buenos Aires. Brazil was supposed to stretch all the way here, and threaten Buenos Aires with Colonia’s cannons. But this was not to be; the resources of the Portuguese colonial empire turned out to be limited and Brazil never reached Colonia. On the contrary, the Spaniards surrounded it from all sides, creating what is now Uruguay. Nonetheless Colonia remained a thorn in Buenos Aires’s side for a couple of centuries and only after a complex deal between the empires did it move to the Spaniards’ hands, preserving however some administrative privileges – and with them its Portuguese character. Today this character is actively cultivated by the locals, streets have Portuguese names, museums focus on that period, and here and there you can see white and blue azulejos plates.

The overall view of the town as seen from the lighthouse. The centre and the main square of Colonia: 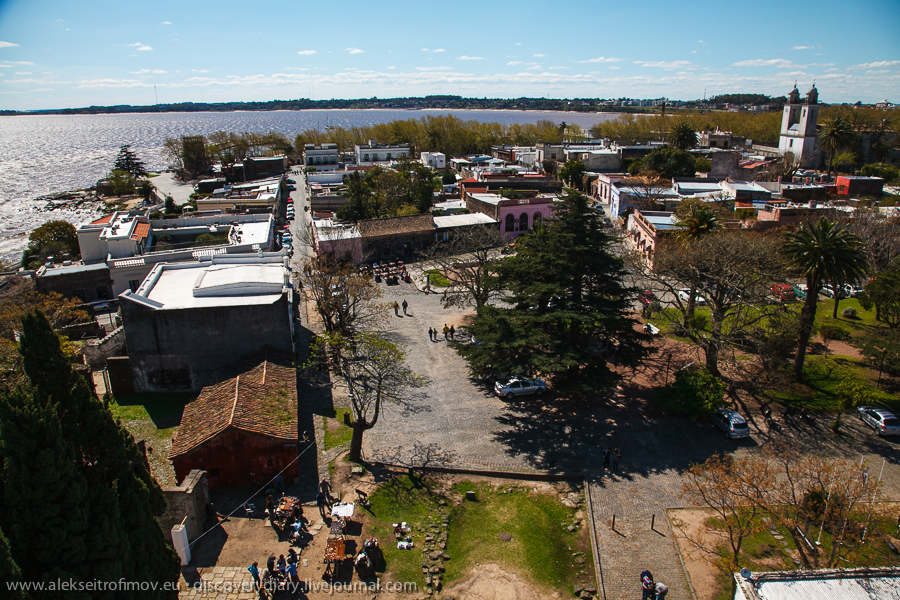