December for me was the month of the Middle East. It started from the (re)discovery of the Turkish low cost airline Pegasus Airlines. I’d already flown them before, yet somehow never considered it as a workable option – and for any movements around the Middle East, it is certainly a great one. It is in the same price category as Ryanair, however it is much more human in the way it is organised and treats its passengers. This time I used it to the limit. The ticket from Brussels to Bahrain changing planes in Istanbul cost me around €100 – and it is quite a distance, almost half the world! Playing around with their website produces quite amazing options. An important advantage is that they have a base in the Sabiha Gökcen airport in Istanbul, which is linked with a strong network of frequent flights with all kinds of destinations, allowing a convenient way to connect very unusual points. For example you could fly from Skopje to Kutaisi or as I did, from Brussels to Bahrain – all for a very reasonable amount.

As I departed from Bahrain, my knowledge of this country was rather limited. I initially envisaged heading for Dubai, and I added Bahrain only when I realised that I could easily visit one more country in combination with the Emirates. For the holders of Estonian passport like myself there was a mini-diplomatic breakthrough in the beginning of 2014 – at that time almost all of the Gulf countries changed the entry rules for the “new” EU countries, making the entrance either visa-free or visa-on-arrival. I’d read in the press about the changes introduced by the UAE, but as I was checking the visa rules, suddenly I realised that Bahrain, Oman and Kuwait had followed suit! And only Qatar is lagging behind. I did try to include Qatar this time around, by applying for its visa the old fashioned way, but the procedure turned out to be quite kafkaesque without any clear rules or deadlines – and so I dropped it. My guess is that their visa rules will change soon too.

In a paradoxical way Bahrain is just the right country to start your Gulf visit. The whole history of the Gulf in a way starts right here, on this tiny island. We’ve all heard of the great Mesopotamian civilisation. The great epic poem of that civilisation was the famous Epos of Gilgamesh, in which King Gilgamesh among many other things visits the fairytale land of Dilmun, a paradise on Earth and the source of eternal life. The prototype for the mythical Dilmun was the island of Bahrain. At the time – we’re talking 5000 years ago – it was the economic centre of the whole Arabic peninsula, thanks to its location at the crossroads of trade routes.

This favourable location was at the same time its undoing. Being at the crossroads of the empires, it changed hands between them innumerable times. To this day it is an apple of discord between Iran and the Arabs. Iran considers Bahrain its property and supports the local majority Shiite population, which protested very loudly against the ruling Sunni elite during the Arab Spring. As the Emir of Bahrain is a close ally of both Saudi Arabia and USA, the protests were put down by force and their spacial focus, the so-called Pearl Roundabout, a local equivalent of the Cairo’s Tahrir Square, was destroyed with bulldozers.

Bahrain is the key detail in the big puzzle of the Gulf, due to the fact that it is the base of the American Fifth fleet. Whenever an American aircraft carrier parades along the coast of Iran, it is in Bahrain that it will dock.

The Gulf starts out of Bahrain in one other key aspect. In the old days it was the economic centre of the Gulf due to it being at the centre of the pearl trade. Cartier would buy his pearls right here in 1920s. The pearl trade in the Gulf collapsed in 1930s after the invention of cultured pearl farming in Japan. And then Bahrain gave the Gulf yet another gift of immense wealth. It was right here that the oil was found and the first oil well in the Gulf was dug in 1932.

My plane landed in Manama at 3am at night. It turned out the visa free regime is not quite visa free – I had to buy a visa, and it seemed the cost was at the mercy of the immigration worker – each new visitor would be quoted a different amount. I had arranged an airport pickup with my hotel, although my actual reservation allowed me to check in only at 14:00. I wasn’t sure the plane would be on time, and so decided I’d wait in the lobby working at the computer. This didn’t quite go according to the plan – the hotel manager just could not tolerate a guest sitting all night long in his lobby. When I opted not to pay for an additional night, he checked me in for free at 7:00. If only all hotels managers in the world were as welcoming! I therefore heartily recommend the Bahrain Ramada hotel. My first look out the hotel window, which seemed very exotic on that first morning: 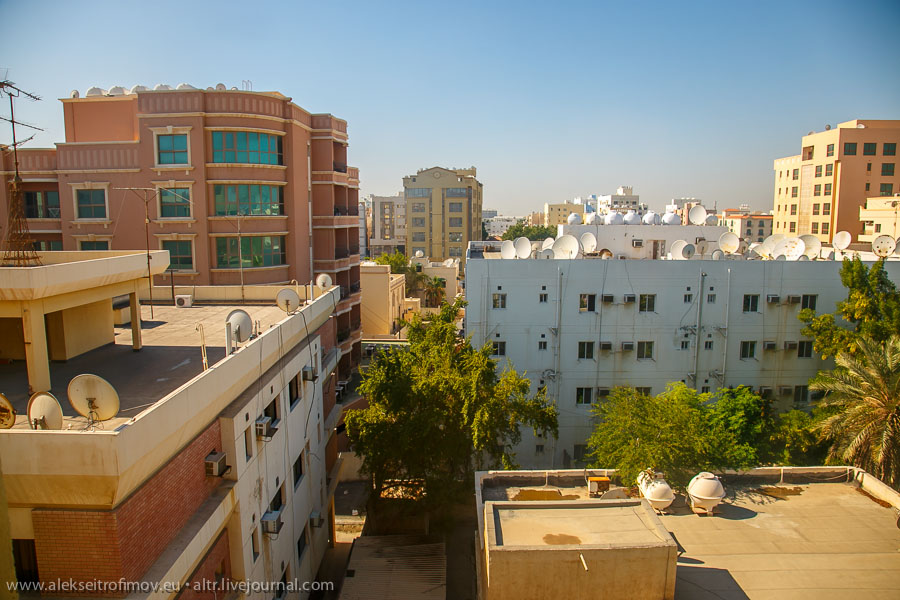