Phu Si mountain smack in the middle of the town offers breathtaking views of the capital and the surrounding mountains. A small temple guards the mount. 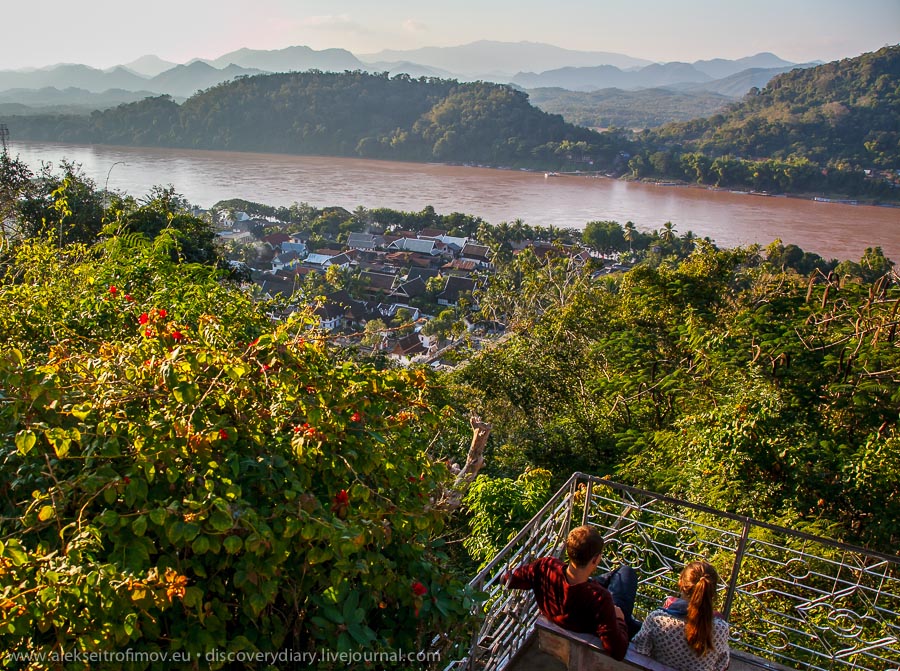 The weaving Mekong before the sunset: 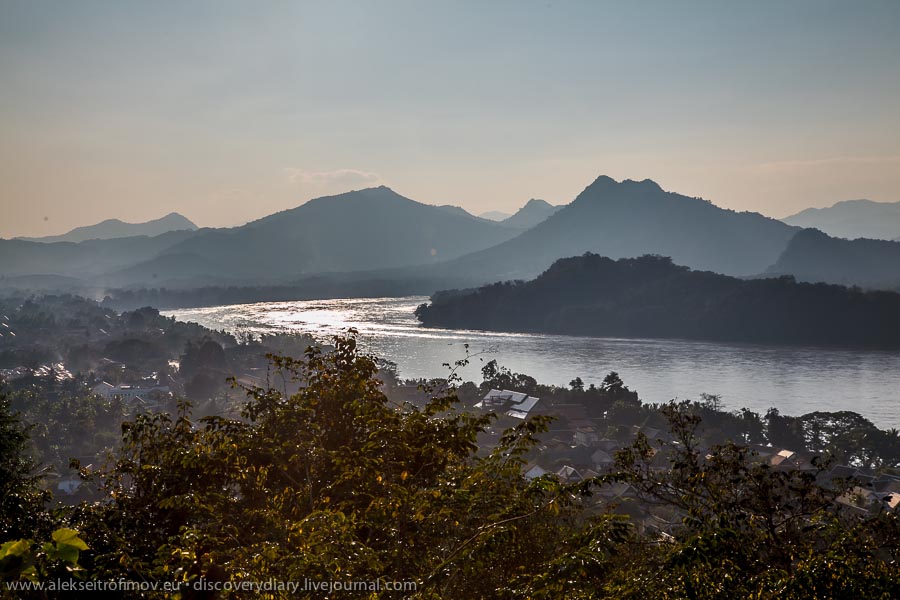 And a tributary of Mekong’s that creates this unusual topography of Luang Prabang – it is really a peninsula delimited by the two rivers. 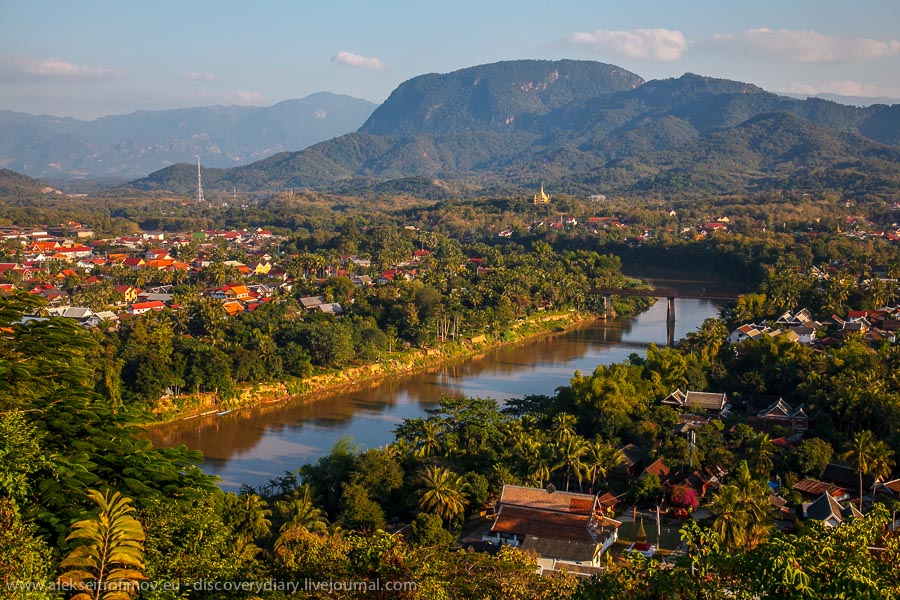 You climb the Phu Si mountain using this stairs. 100 metres from the ground level: 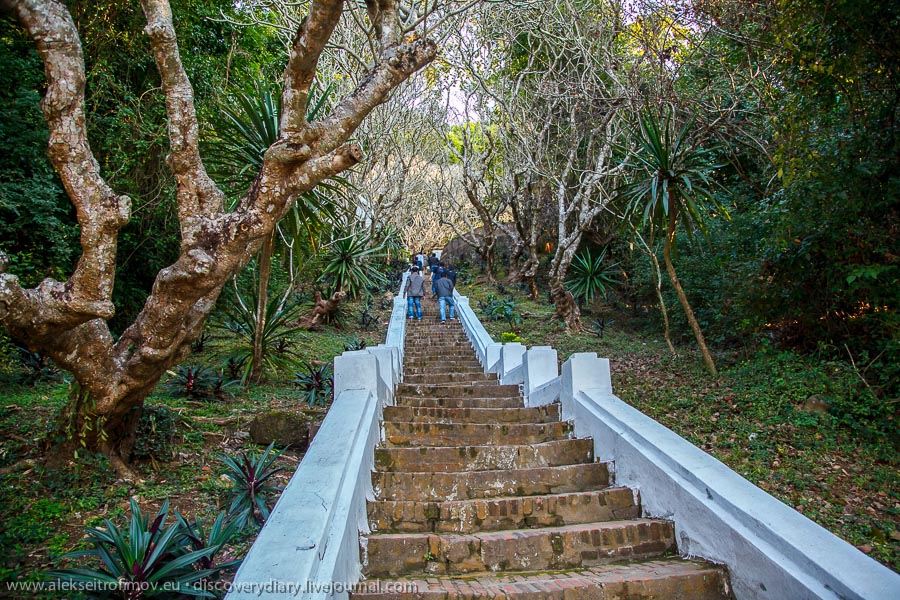 Everyone starts the sightseeing tour from the former Royal Palace. In fact it was the communists who moved the capital of Laos to Vientiane. Previously it was Luang Prabang where the power sat. In the French time a so-called king aboded in LP, although in truth he had little power and anyhow the French ruled most of Laos directly and only about a fifth was under the king’s nominal rule. 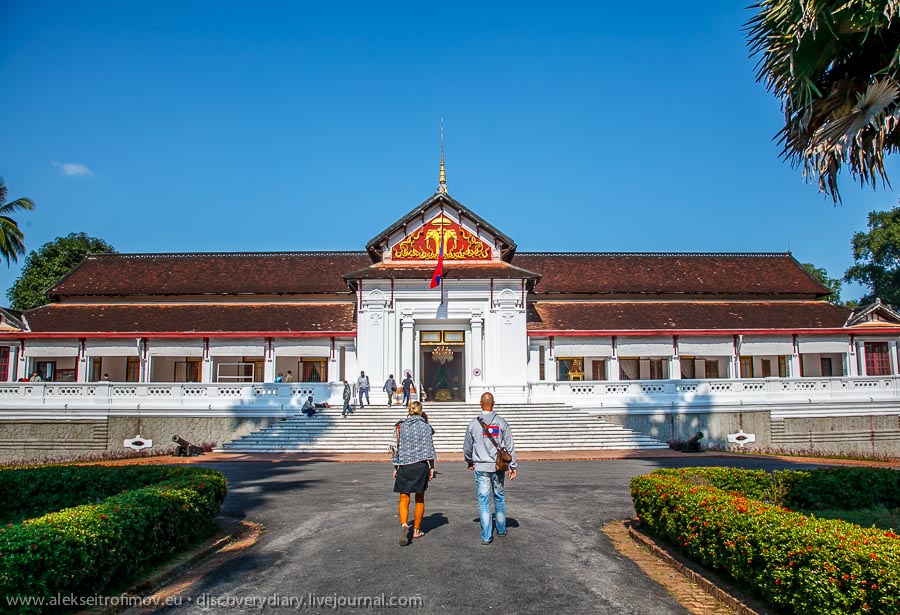 The palace is rather large but you cannot photograph inside. It has interesting objects on show, such as the presents sent to the king in the 1960s by various countries. Each country aimed at symbolically demonstrating its best achievements. USA sent a model of the machine that roamed the Moon, USSR sent a model of the sputnik. This conserved past rivalry seems bizarre today.

The temple on the Palace’s grounds: 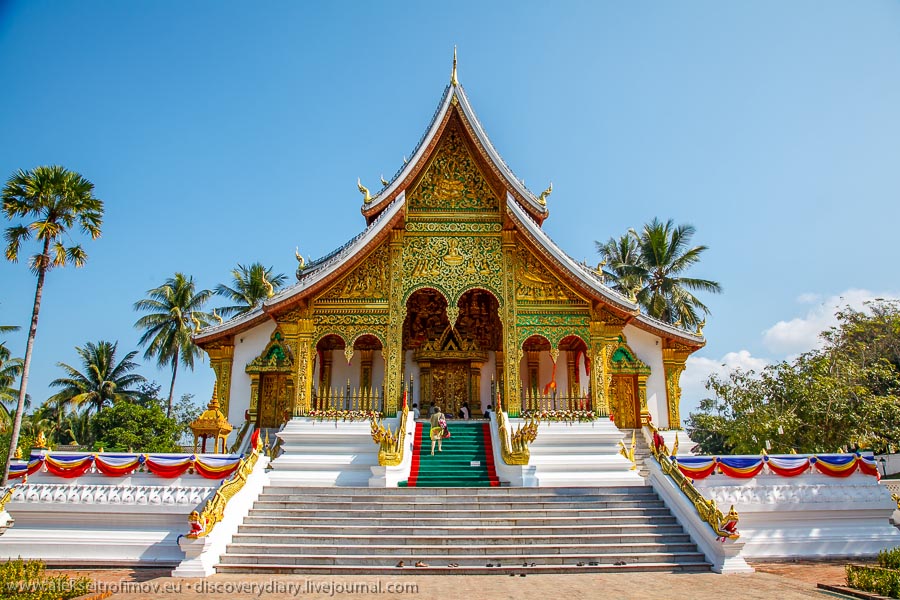 The main Buddhist temple of the city is Wat Sieng Thong. 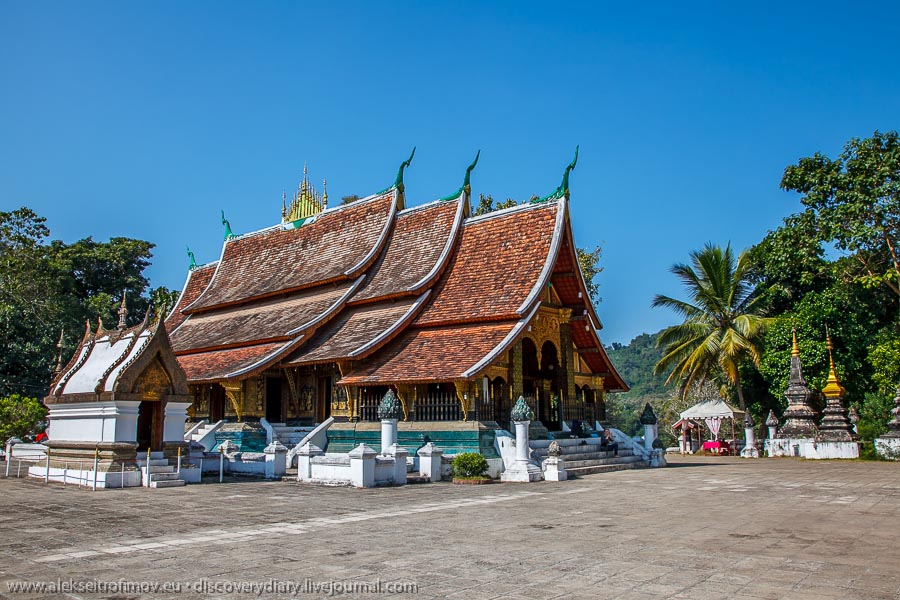 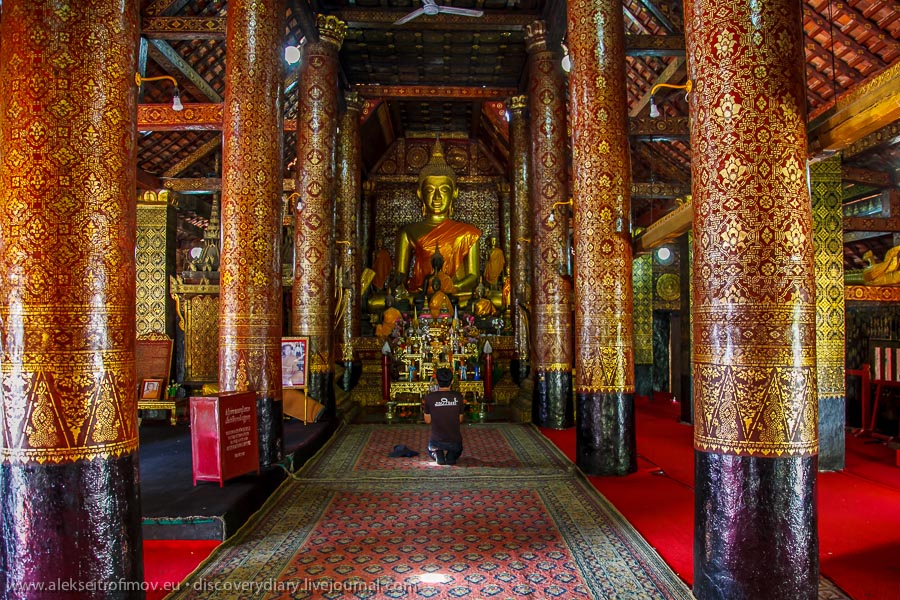 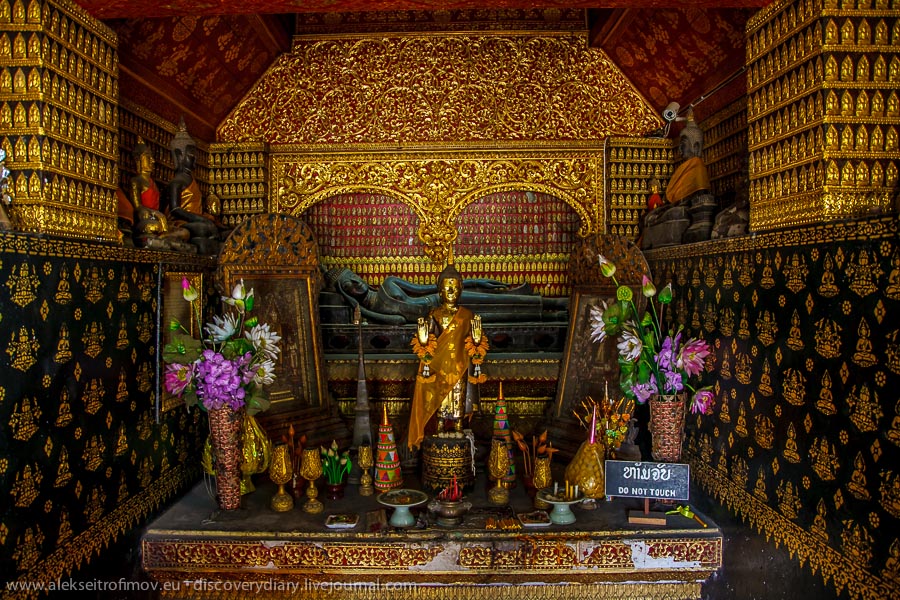 This little building in front of the temple contains the funerary chariots of Laotian kings. 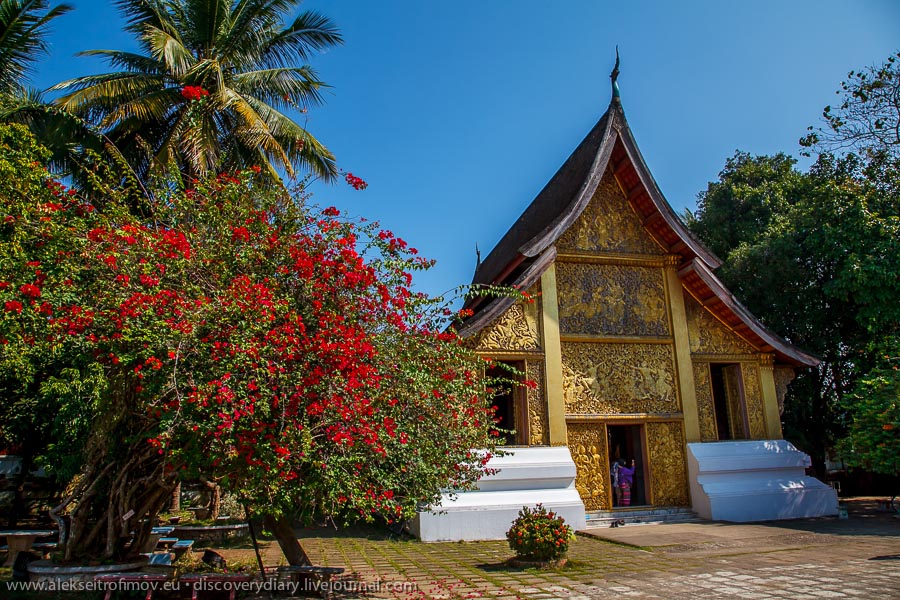 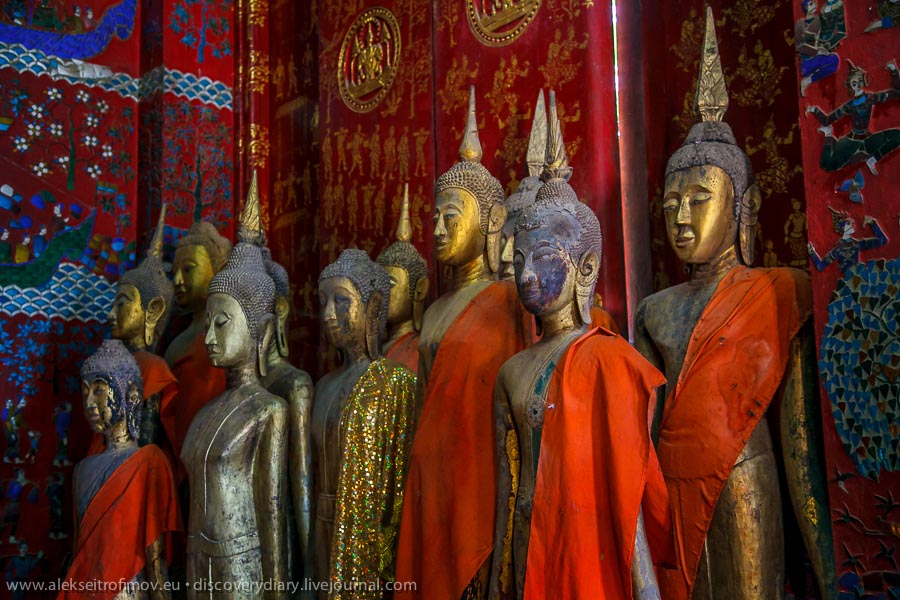 The Mekong keeps peeking from among the trees as you roam Luang Prabang: 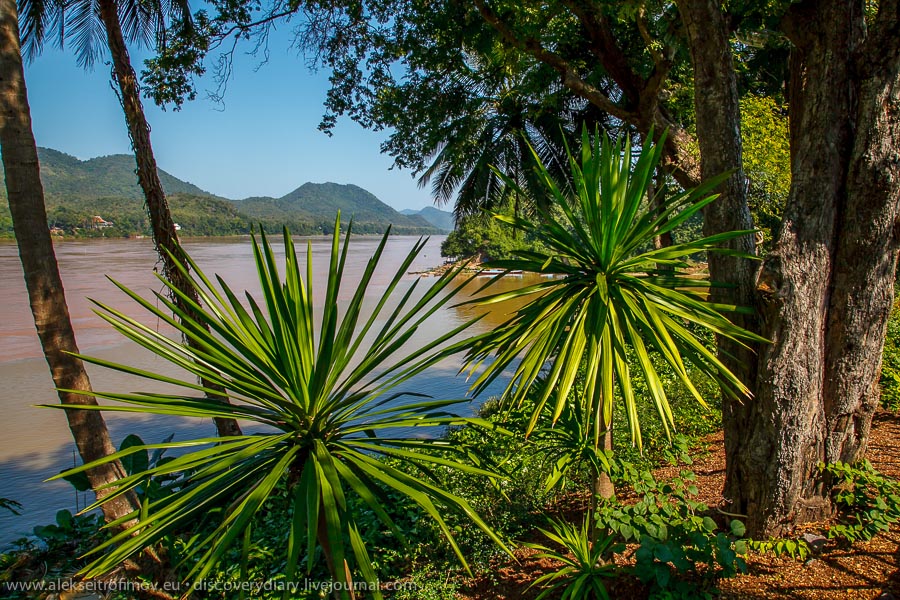 Of course it is better to stay in a guesthouse with a view of the river. I even had a small balcony. It is very quiet in the old town, the silence is only broken from time to time by the sound of a motorbike. And so you sit on the balcony and watch the Mekong. 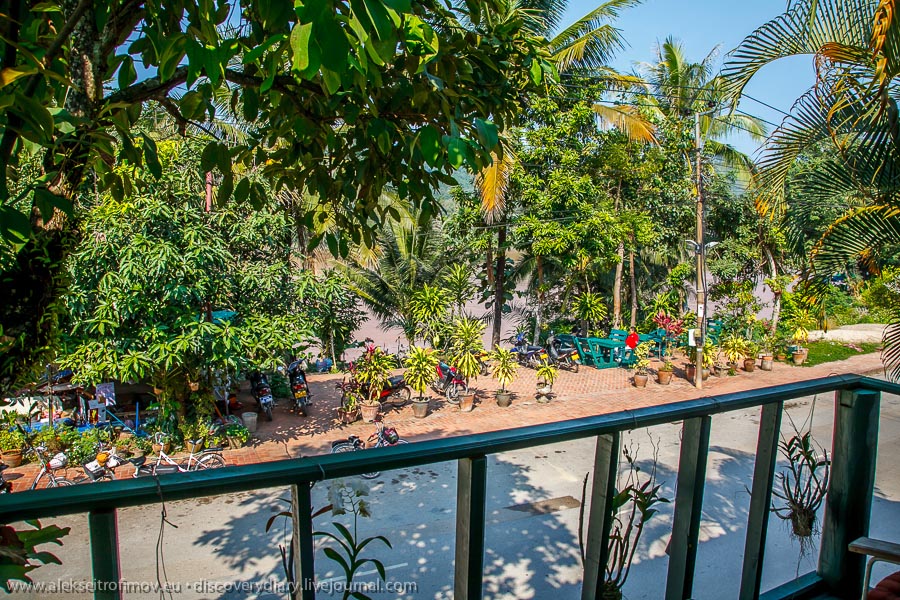 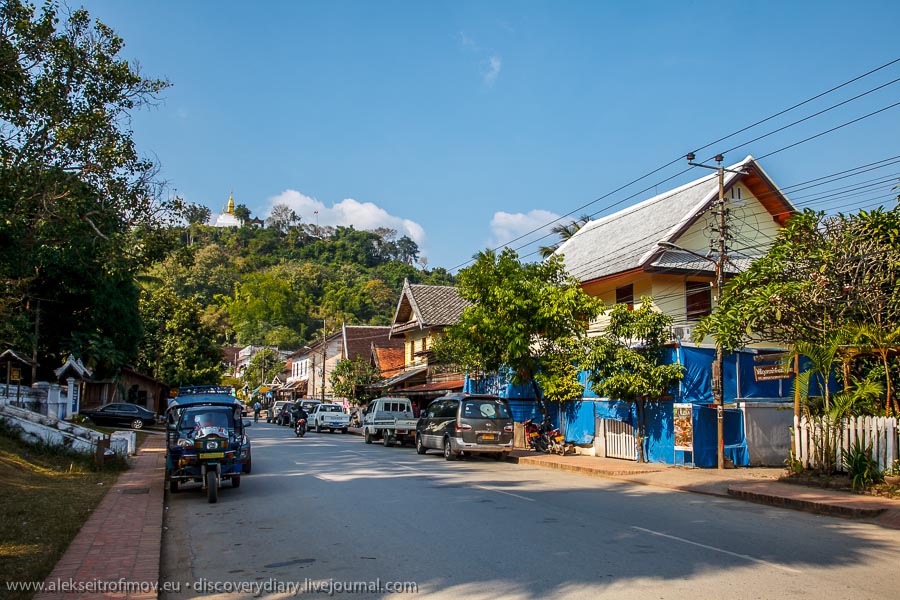 I visited a folk art museum. One of a number of items representing the various tribes of Laos, whose culture is very much alive: 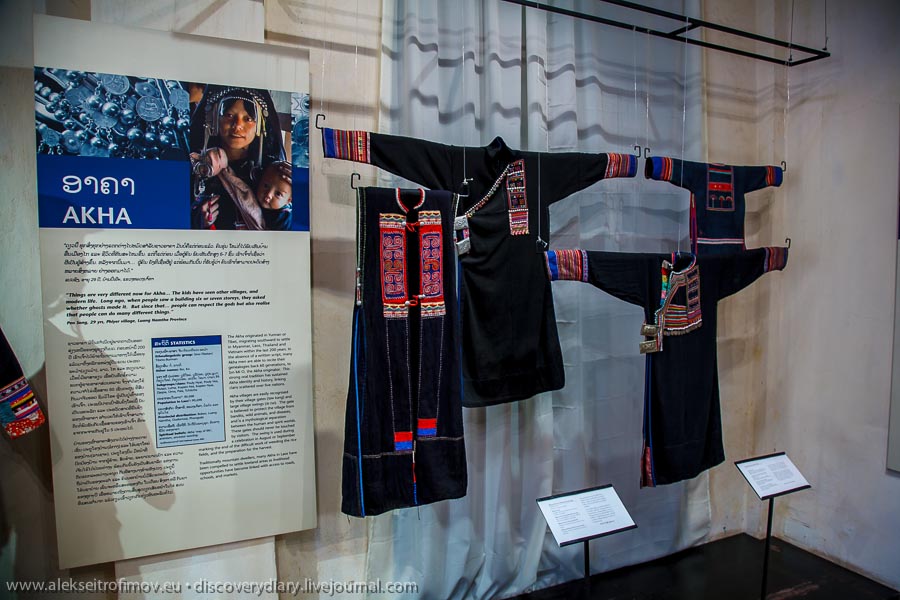 The diagram showing the ethnic diversity of Laos. Of all the South East Asian countries Laos is the most diverse. 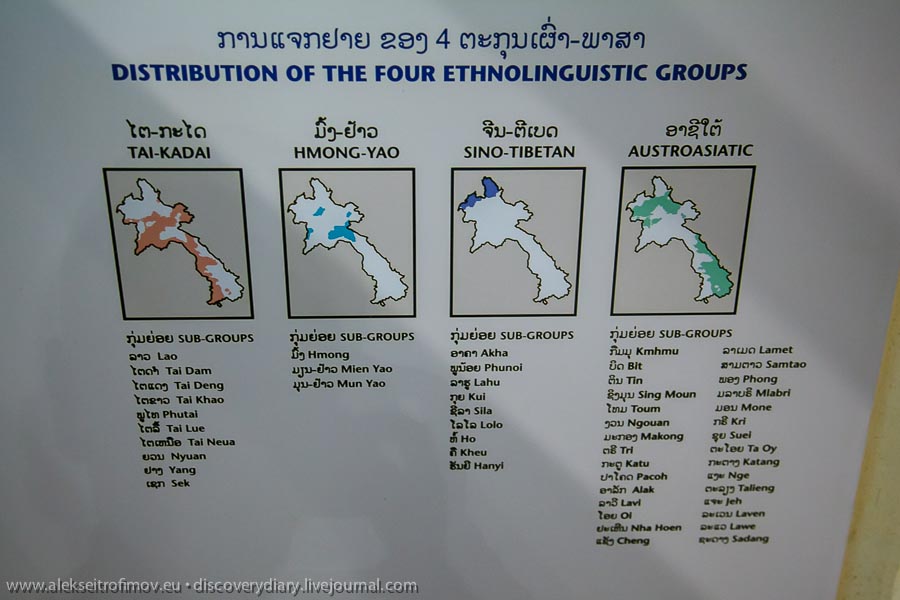 Wat That Luang. I came across it quite by chance, seeing it from a street. It was empty, not a tourist in sight. A young monk is running as he is late for service inside the temple. 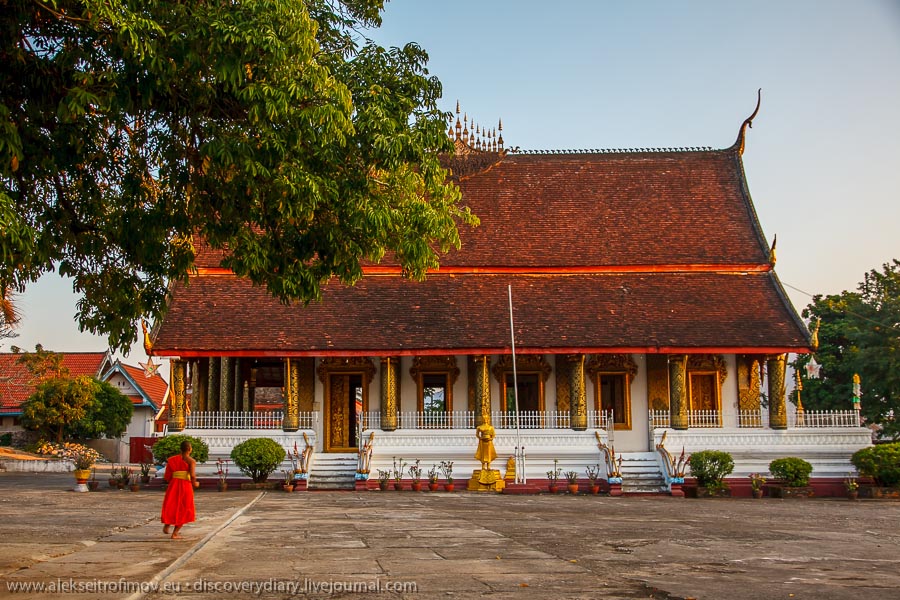 The service itself. The silence is pierced by the sounds of the monks’ singing. 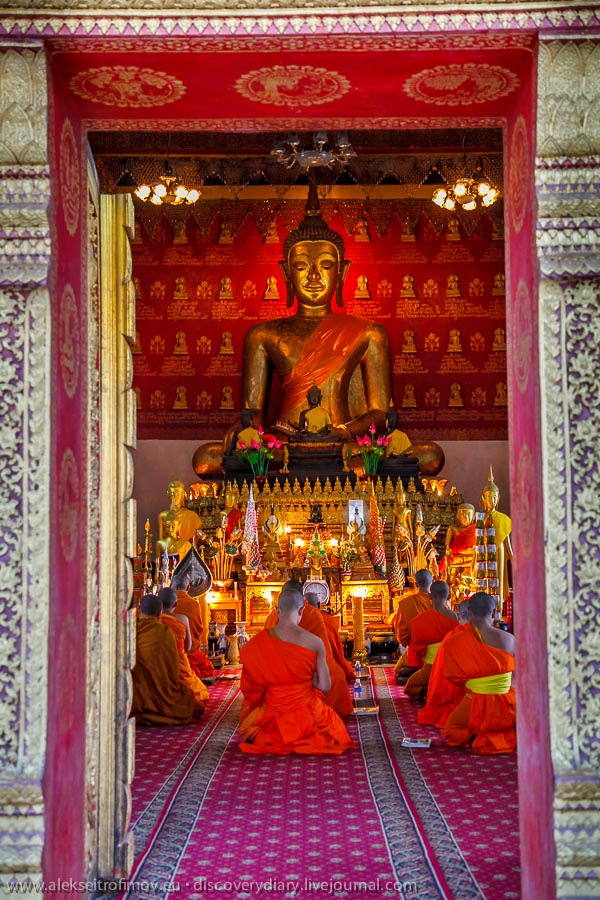 This seven-headed snake is guarding the entrance of the temple. 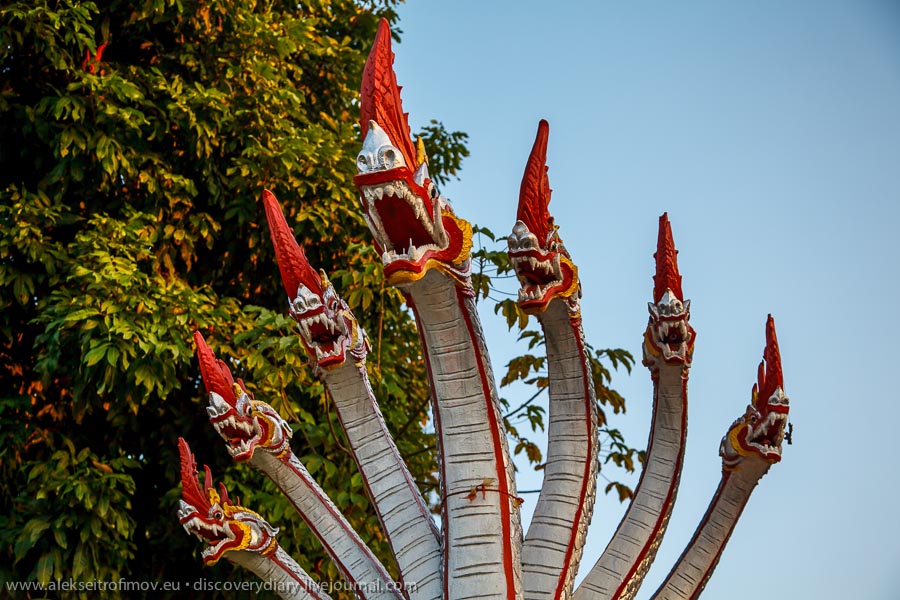 In Luang Prabang they have a wonderful project called Big Brother Mouse. The main objective of this project is to promote reading among the Lao people. Up until very recently the literacy level in Laos was very low, one of the reasons being the almost complete absence of books in Lao. The guys in Big Brother Mouse aim to confront this situation and so they wrote a number of simple books in Lao and they go to remote villages to conduct book parties, where they give out the books and teach people to read to the extent of the possible.

There is another way how an English speaking visitor of Luang Prabang can contribute to the project. Every day from 9 to 11 and from 17 to 19 you can come to Big Brother Mouse as a volunteer to have a conversation with the local students of English. They have little practice and therefore conversing with volunteer is of great use to them. I went there and I must say I found the experience very interesting, as you can speak to the locals in English without being in a situation of buying or selling. On the contrary, they look for the dialogue proactively. It is also quite intense / difficult, as their English is pretty limited and it takes quite a lot of concentration to keep a conversation going for two hours. There are always more Laotians than the volunteers (I was there on a Saturday morning). 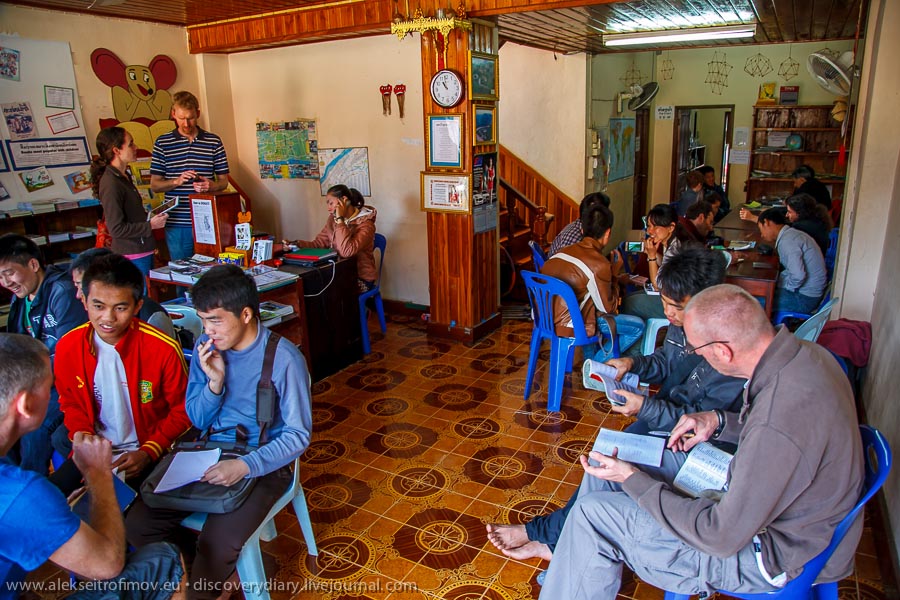 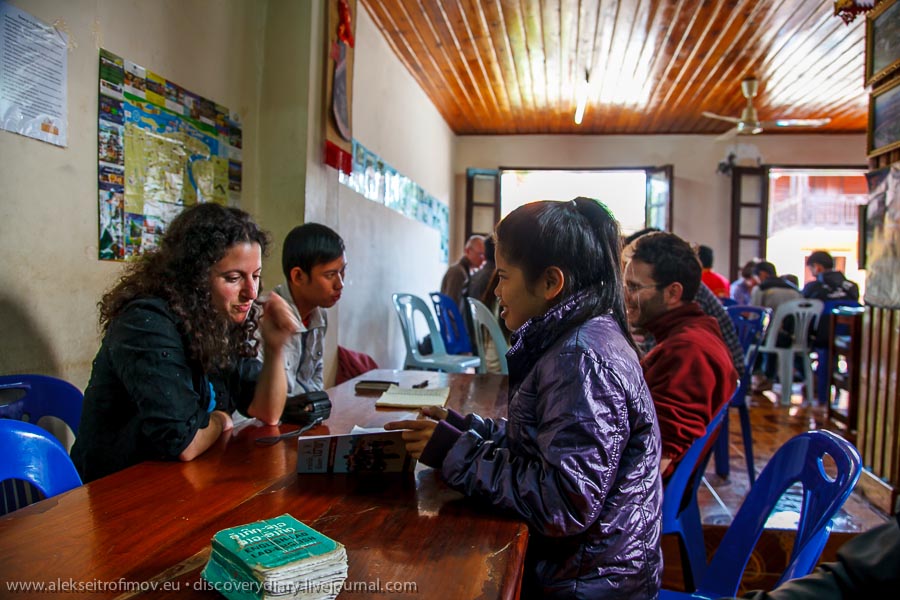 Most of the time I spoke to this guy. His name is Yeyang, he’s 21 and he belongs to the hmong ethnic minority. He comes from Vientiane province and he studies in Luang Prabang in a university, double major: English and law. His parents are 46 and 37, they were married when they were 24 and 15 (!). He was born in a village, his family owns 20 buffalos and 6 cows and lots of chicken. They are animist. He’s the oldest of 10 children:
Yeyang 21 (himself)
Luyang 20 (brother)
Yiyang 18 (sister)
Touyang 15 (brother)
Moyang 14 (brother)
Chuyang 12 (brother)
Chilou 10 (brother)
Tsai 9 (brother)
Pajao 5 (sister)
Yilen 2 (brother)
I was surprised to learn that the hmong language uses Latin letters. All around fascinating. 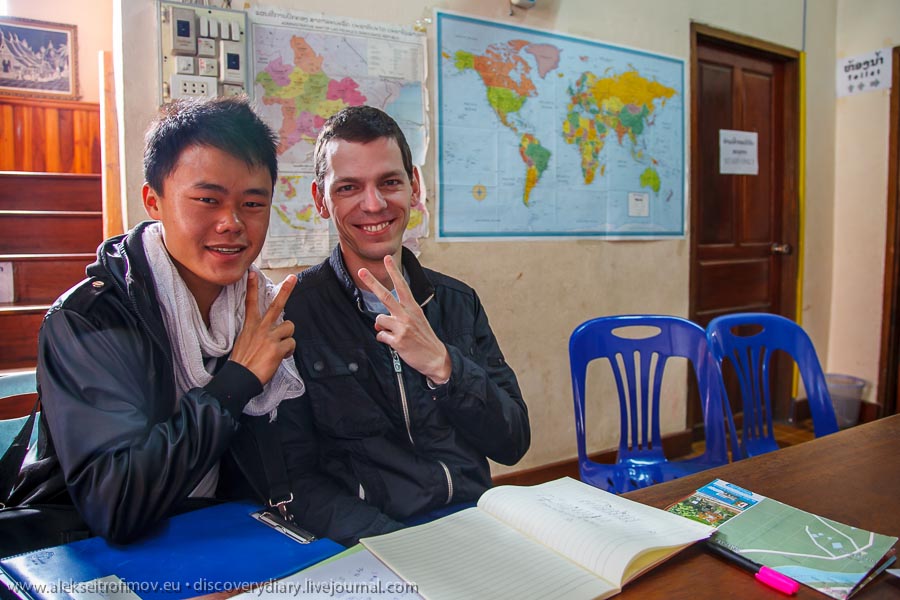 This guy was a bit of a tragic hero. He barely dared to utter a word in English. The teachers provide them with long lists of questions that they can ask the volunteers, to facilitate conversations. He was afraid to read even one question. When I would ask him a question, he would freeze entirely. I was bored to answer their prerecorded questions, I was much more interested in actually asking them stuff about their life. Besides, you improve the language much more when you produce rather than when you listen, so it’s in their interest too. 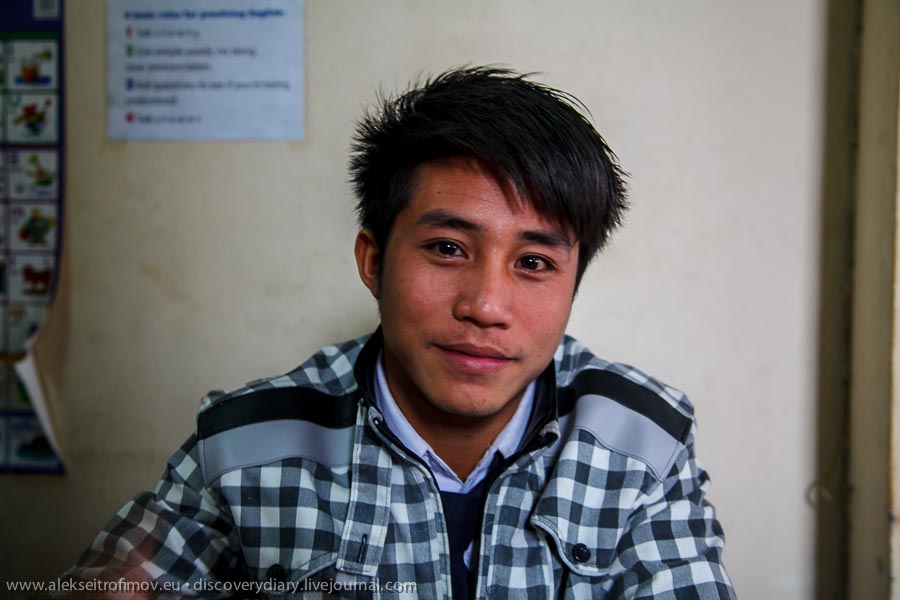 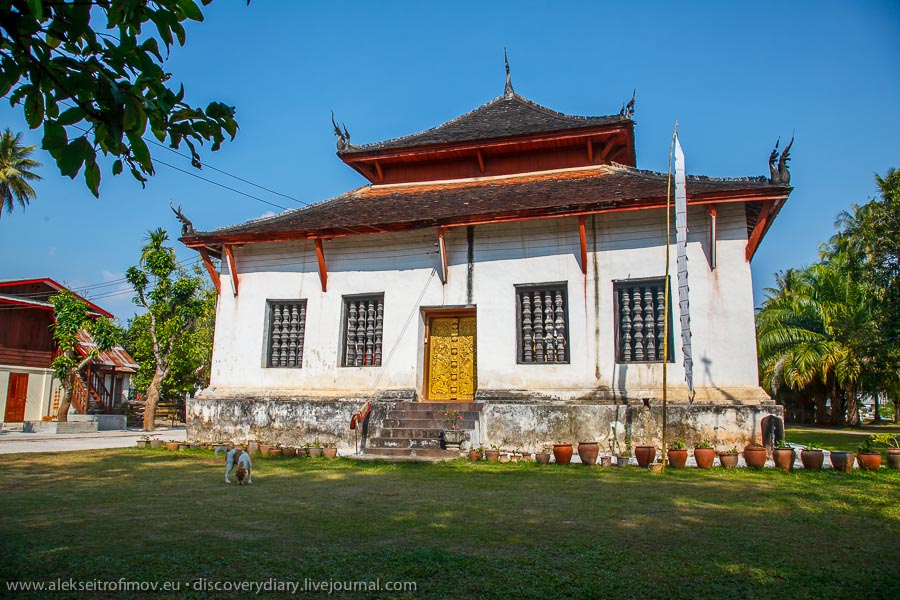 Famous for its large stupa 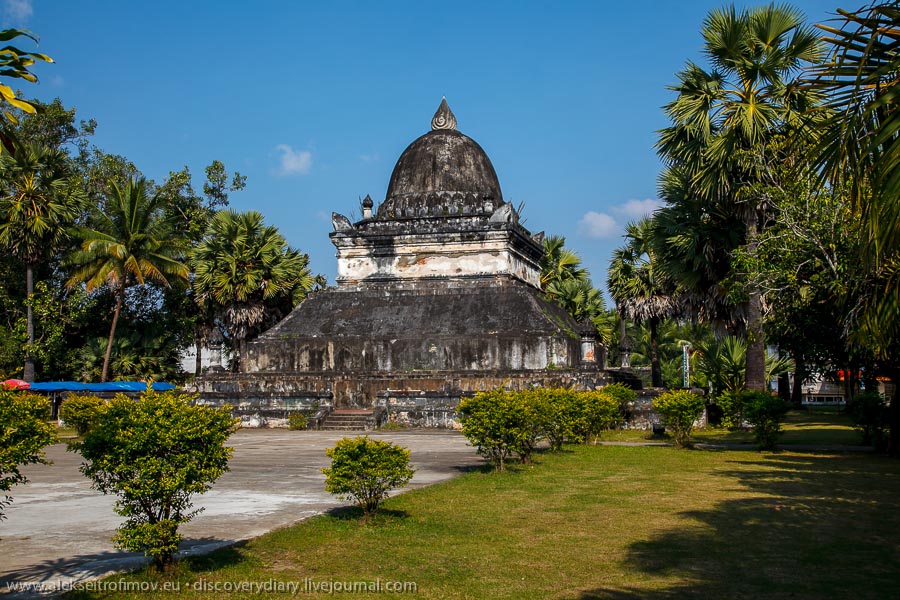 The monks are obviously playing some game next to it! 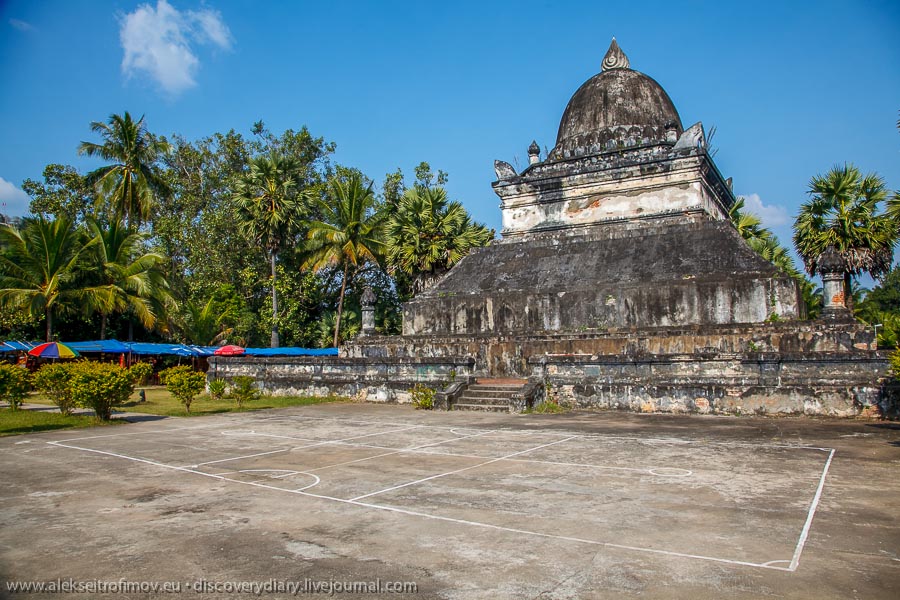 Some new angles of the Buddhas inside: 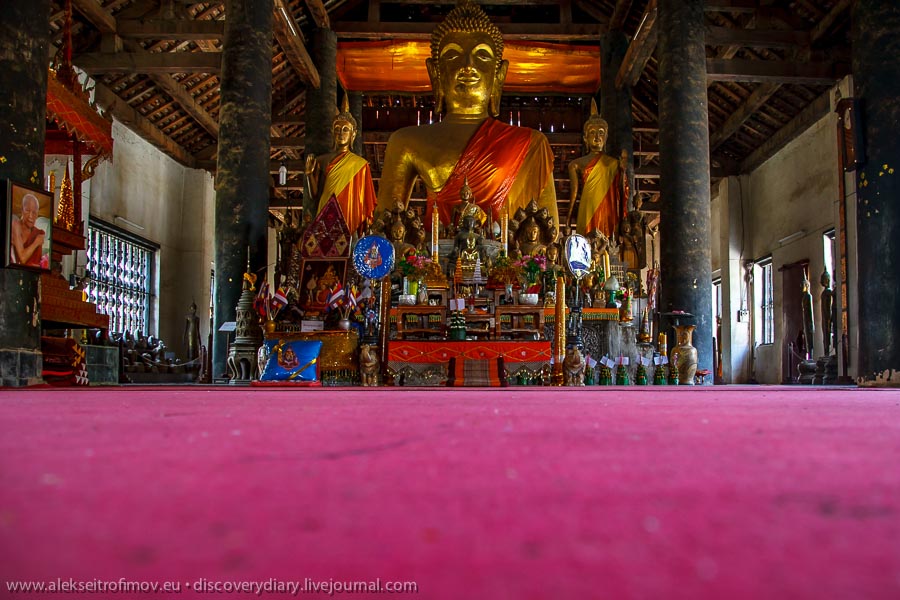 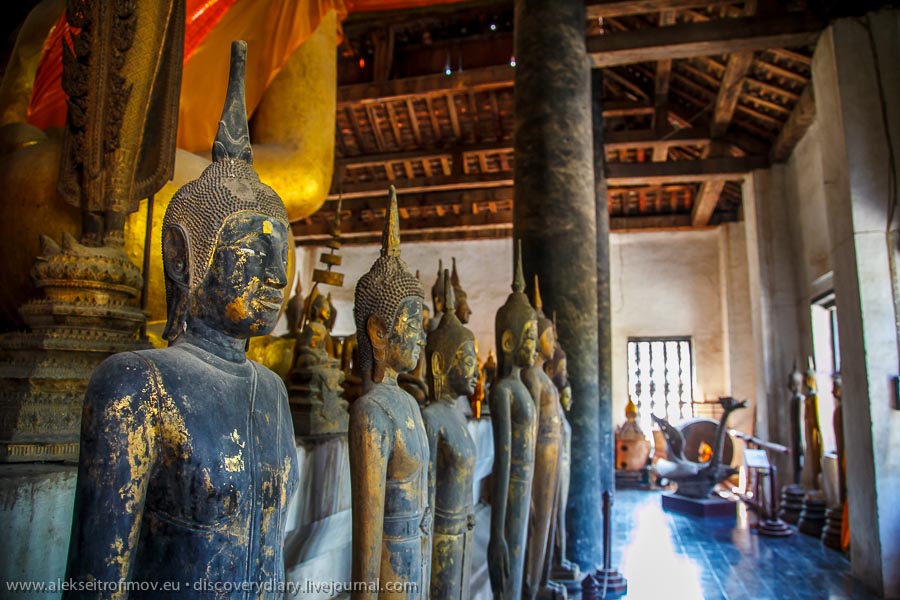 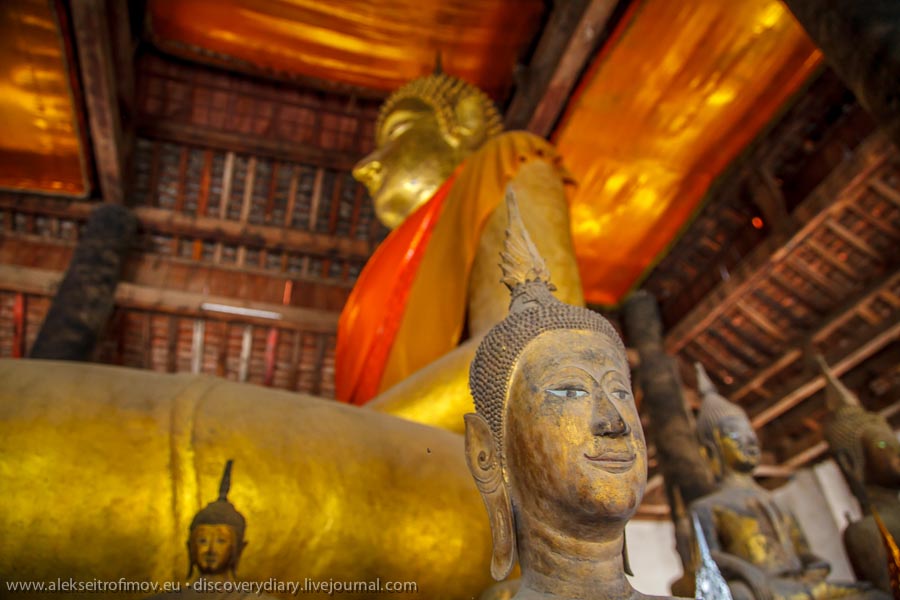 One thought on “Luang Prabang”