The Nevis Bungy is the highest bungy in Australasia and one of the highest in the world. It is set 134 metres above the Nevis River canyon and the free fall lasts 8.5 seconds. The canyon is about 40 minutes by minibus from Queenstown, the world capital of extreme sports located on the South Island of New Zealand.

The video of my jump:


I travel around New Zealand on a Kiwi Experience bus. In these buses the system is that during the day’s drive the driver passes around various lists for accommodation and activities, where you put yourself down for whatever you are interested in. Afterwards all of this gets organised for you by the driver.

Out of all the Kiwi Experience bus only two people registered to jump the Nevis on that day – myself and a guy called Brett. The driver told us at first that we wouldn’t be able to jump because it was very windy in the canyon and so too risky, the jumps were cancelled for the day. But when we arrived in the main AJ Hackett bungy centre by the Kawarau bridge, suddenly it turned out that we can jump after all. So Brett and myself signed up for it right away. 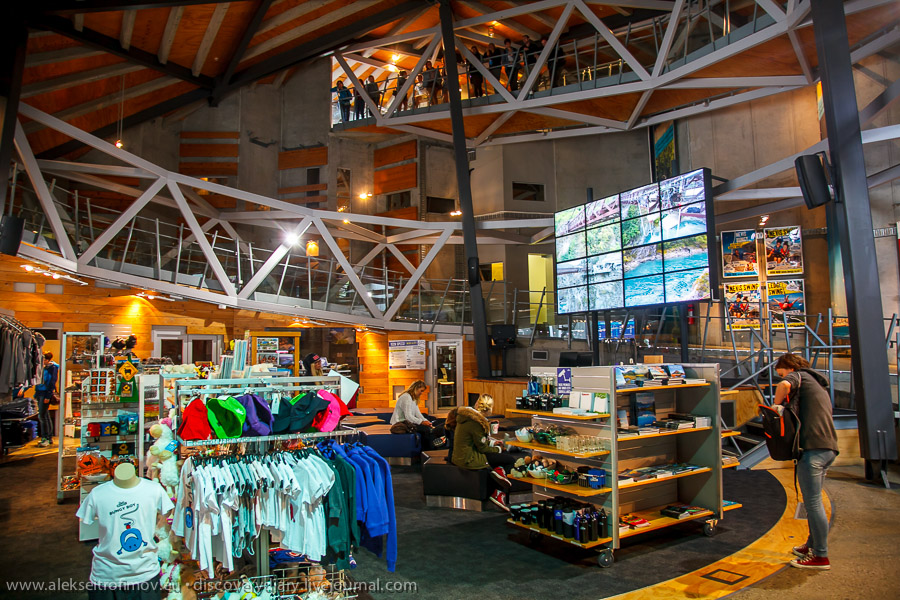 The centre is right next to the bridge that spans the valley of the Kawarau river. It is actually the first place in the world where commercial bungy jumps were organised and the 43 metre jump is still possible to do there today. (This is three times lower than the Nevis.) We watched one girl from our bus jump. Here she prepares… 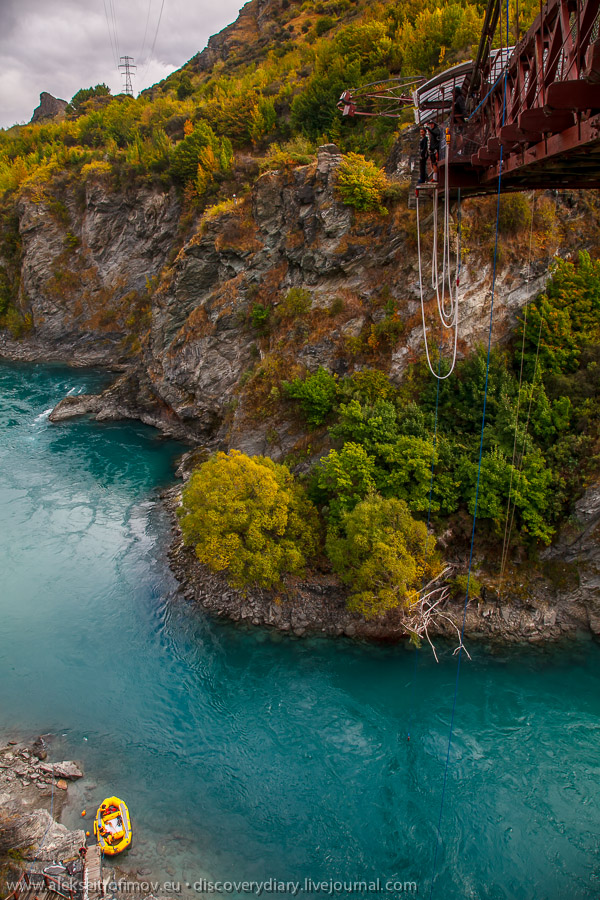 and goes for it! 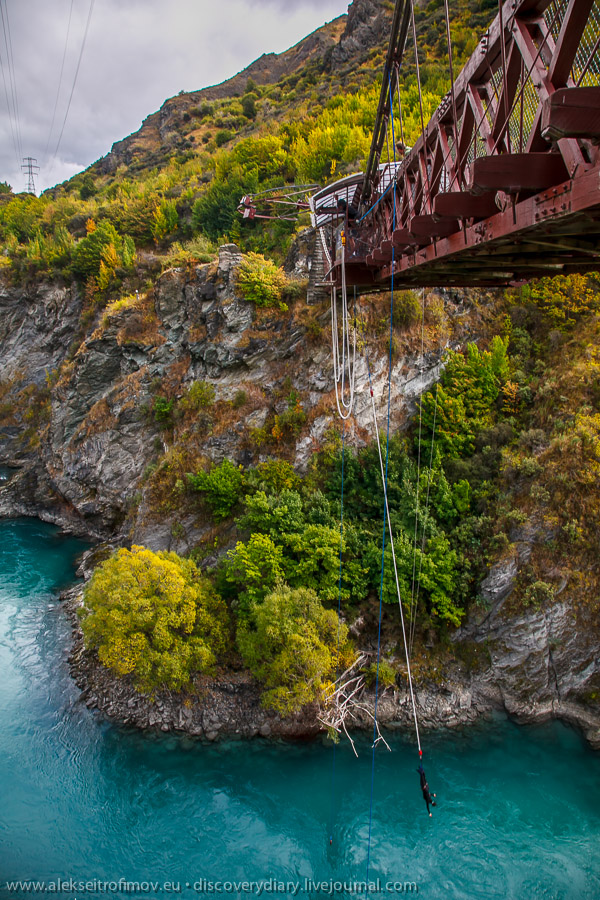 During the Kiwi bus drive down the two Islands I sat side by side with Brett a couple of times. He’s 25 and he works as an electrician at the top of Mt Ruapehu. His task is to maintain in working order the electrical wires that send the current to the top. In winter when it’s snowing heavily or the hurricane wind is blowing it’s no easy task, but it is in winter when the peak season comes – lots of skiers at go to Ruapehu. I had an interesting interaction earlier on with Brett. On Kiwi Ex bus the drivers organise from time to time some funny games to make the ride more entertaining. This time the driver offered the bus a riddle and promised a Jägerbomb in the evening in the bar to the one who solves it. FOr a logically minded the riddle took 20 seconds to solve, and so I explained the solution to Brett. “Go get your Jägerbomb” he told me. But I just waved my hand at him – it seemed unfair to even compete with the youngsters on the bus. And then a little later he just got up, went to the driver and told him the solution (which was right of course). When he got back, I just smiled at him broadly – though I was slightly surprised by his action, the ethical aspect of it mostly. He just told me “Thank you Alex”.

It is easy to sign up for the jump, only after that do you start to realise what you in for. Brett immediately admitted to “butterflies in the stomach”. As for me, I mostly felt giddy from excitement. In my mind I was quite certain that I would just jump. In fact the possibility of chickening out seemed way scarier to me than the jump itself.

I slept all the way to the Nevis canyon. On arrival we were dressed up in special harnesses, put our staff to the lockers and then it was announced that the wind went up again in the canyon. So for a while we just had to sit there and wait – rather excruciating wait I must say. I thought already that this time I wouldn’t be able to jump, but suddenly the organiser waved to us and off we go. 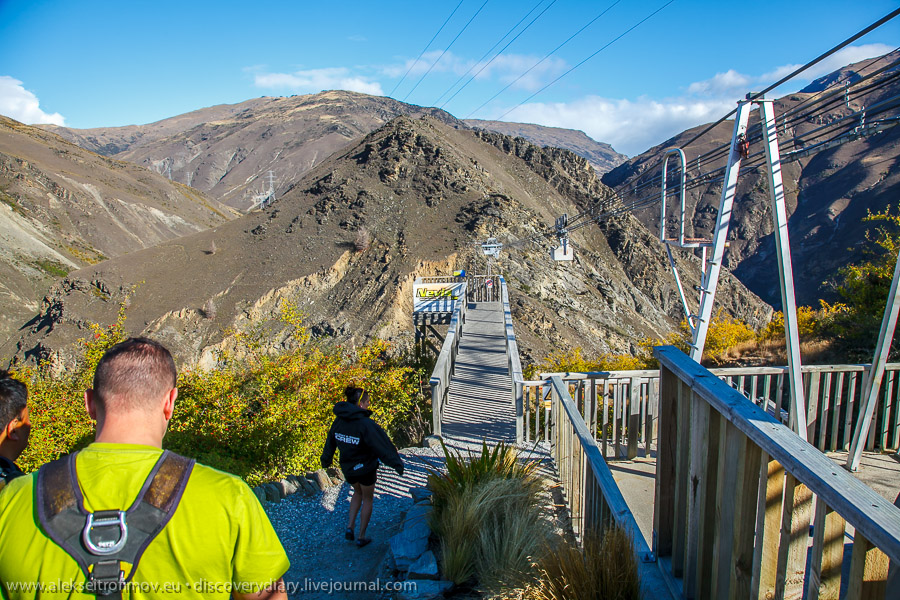 The Nevis bungy is done from a highwire pod suspended above the valley at 140 metres. You get to the pod in a special shuttle which moves on the wires. This in itself is a rather unnerving, particularly when a strong wind is blowing! 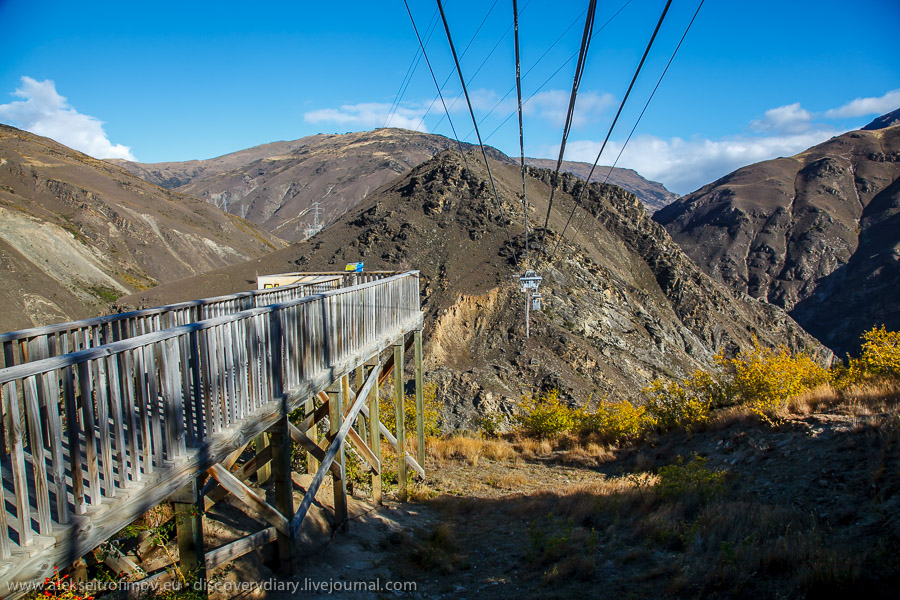 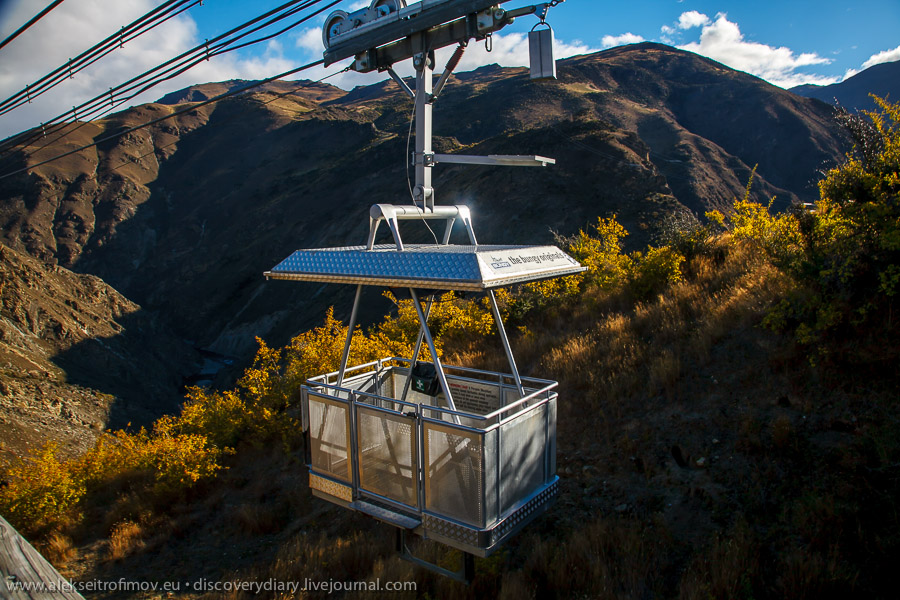 The wires leading to the pod: 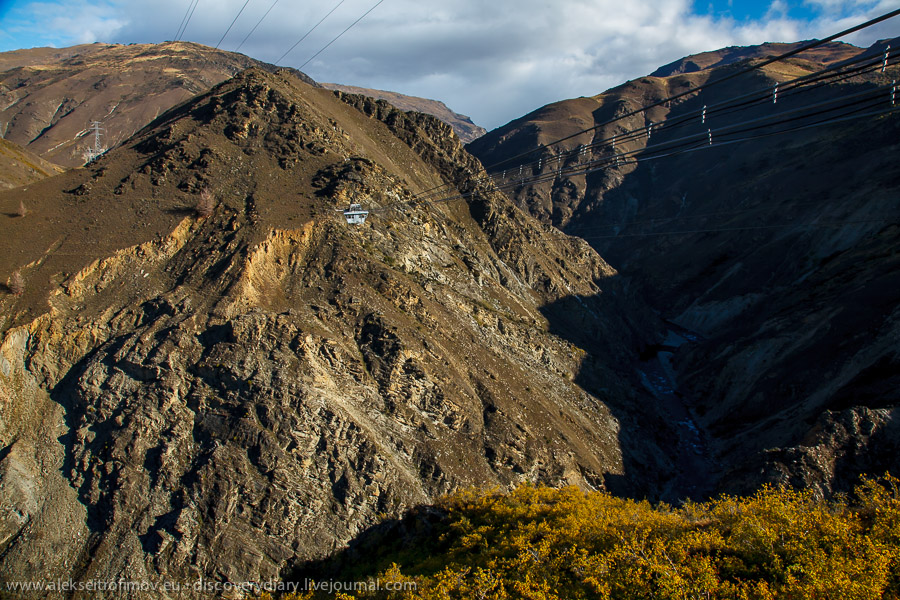 The floor of the shuttle. You get to see the canyon underneath: 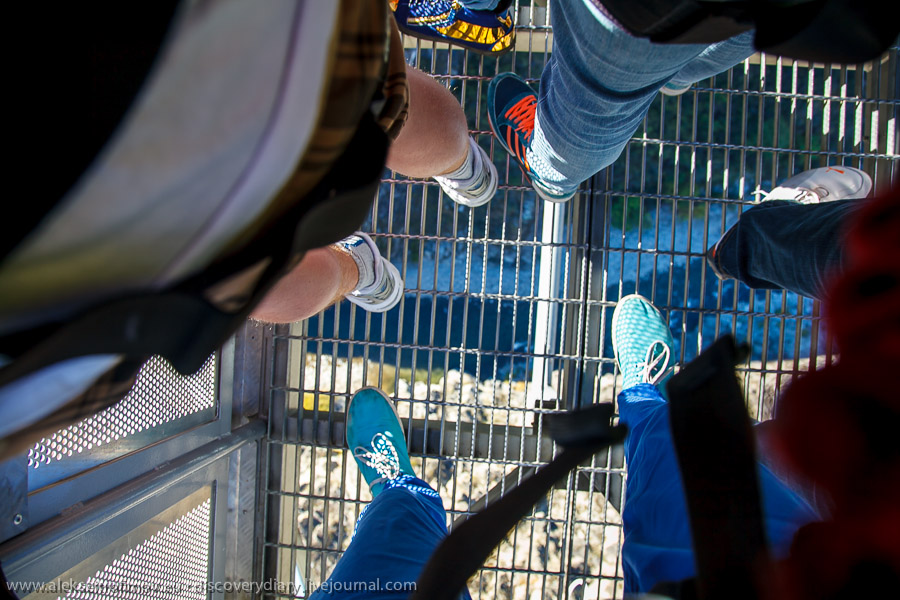 The pod as you see it from the shuttle: 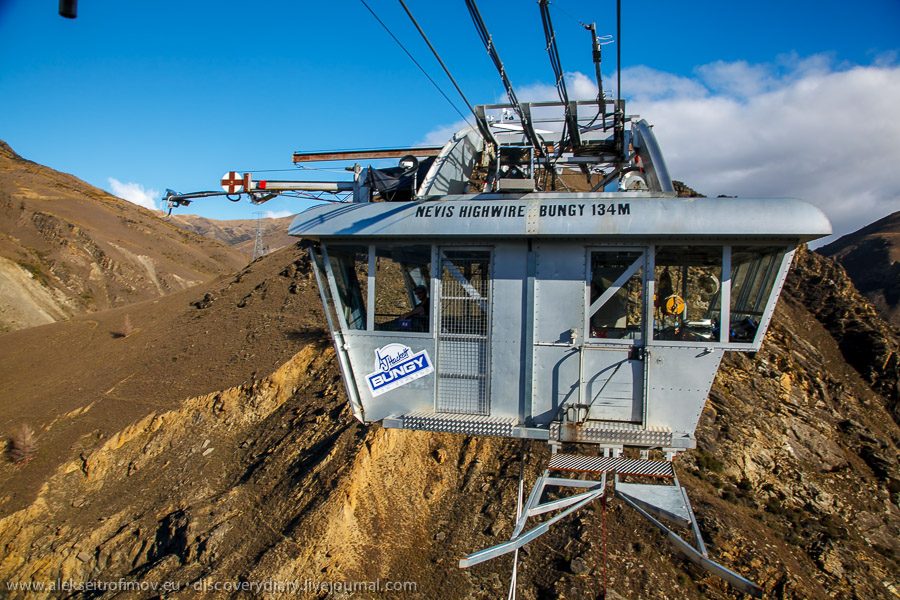 We go to the pod:

Once you get to the pod, the first thing they ask you is to sit on glass windowsill – you can see it on the previous picture on the right. Which seems rather absurd in the moment, literally you sit above the abyss, but perhaps it is a way of preparing you psychologically. I was the only one in the group who bungy jumped for the first time in my life, so they put me to jump last. And off we go. They count down for you: 3… 2… 1… Go! An American guy from Wisconsin went down. Brett is next. 3… 2… 1… Go! He holds his head in his hands and cannot jump. They restart the countdown for him. This time he goes down. A Chinese girl is next. Here she is waiting for her turn as Brett is lifted from the canyon: 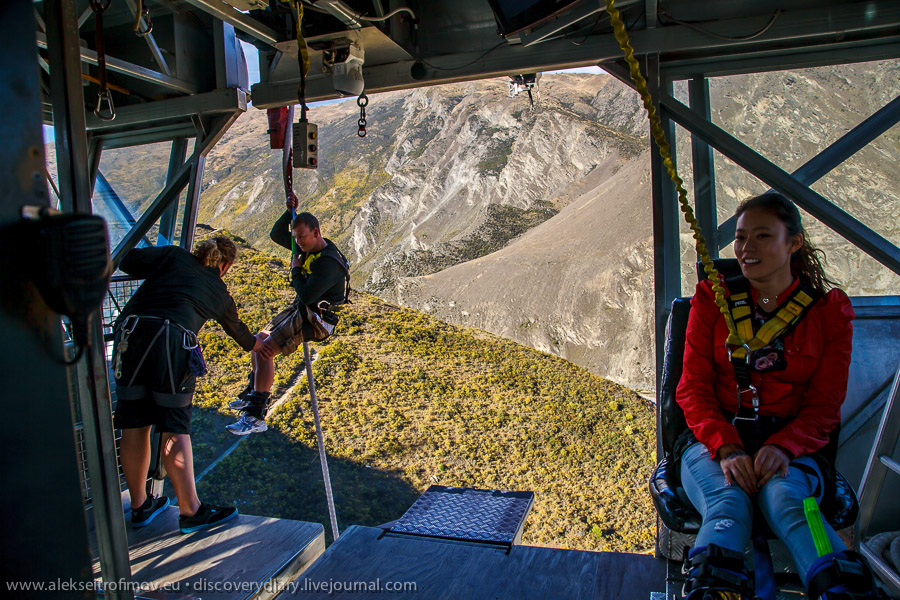 She is led to the abyss: 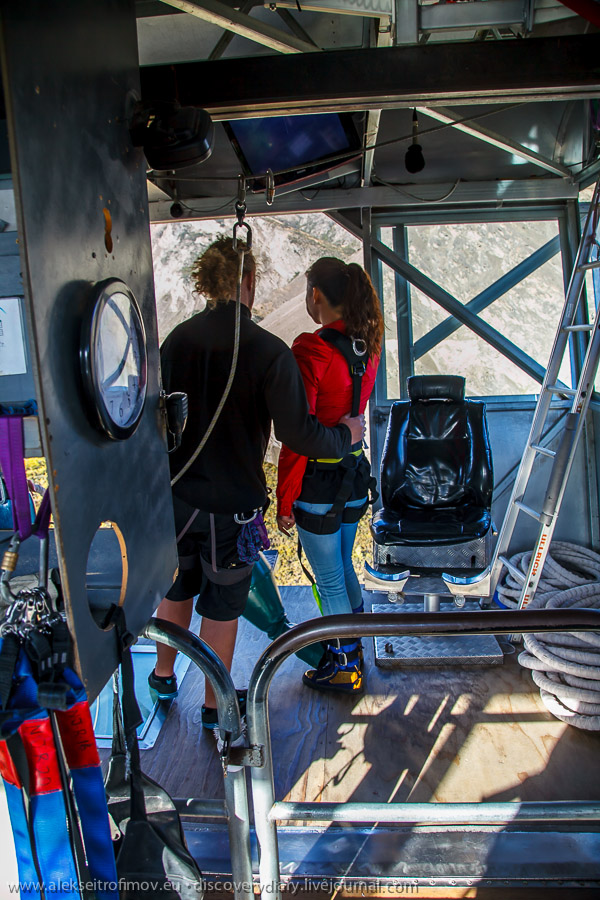 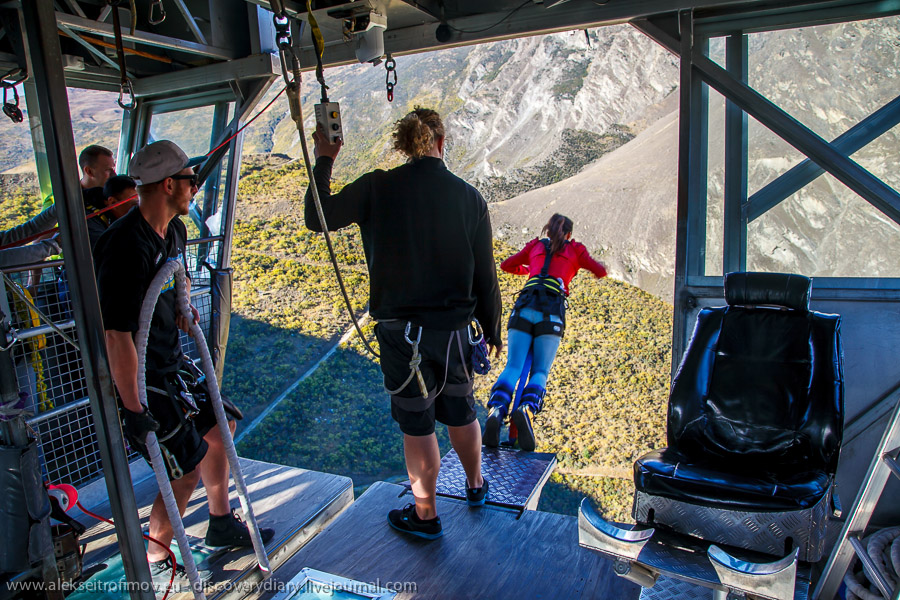 I am clicking my camera to the last second. Through the glass parts in the floor you can see how the girl is bouncing on her bungy. I’m ready! 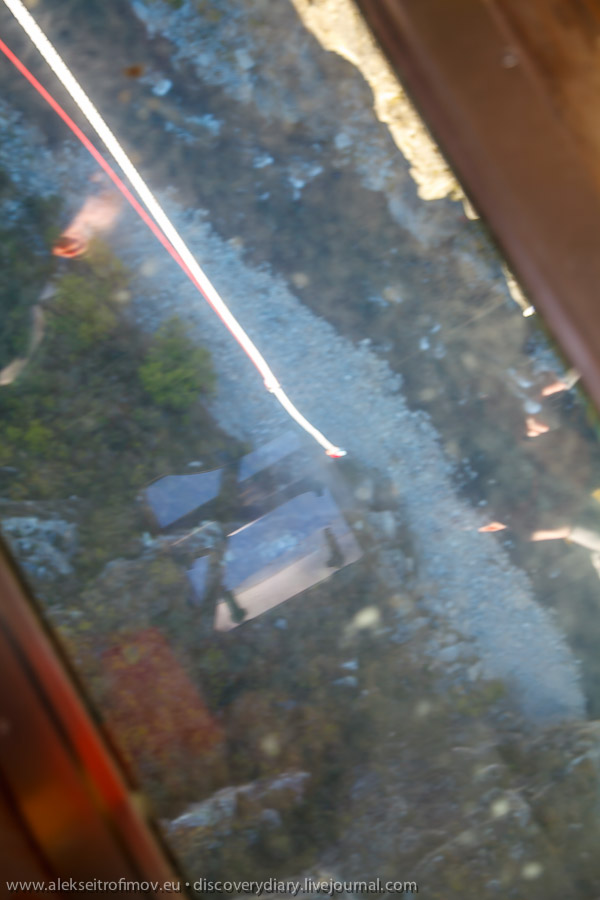 You can see in the video that the instructor is talking to me. I have an old muscle strain which sometimes causes discomfort and I reported it dutifully when registering. Up there the instructor started to query me about it. Finally he decides I can go ahead with the jump. He also explains that on the top of my second bounce I have to release a strap to change my position from head down to head up. I feel all pumped up, all I’m thinking about is the technical details of the jump. He leads me to the edge and suddenly 3… 2… 1… Go! I jump.

As you enter the free fall your brain does get momentarily disoriented… shocked even… just like when you skydive. But after a second you are simply falling and aware of it. It is pure pleasure. Very gently the bungy stops your free fall, in the Nevis jump your first bounce is enormous – about 0 metres – and then you fall again! The second bounce. At the top of the bounce I release the strap. Couple of soft bounces more and I am lifted up. Euphoria.

4 thoughts on “I jumped the Nevis”