I am back to wonderful Ubud in this post, this time to tell about the bike tour of rice paddies. A myriad of small companies offer such a tour in Ubud. Surprisingly, most of these companies have virtually exclusively positive reviews in tripadvisor – first time I see such unanimity. Mind you, the reviews are obviously genuine – it is quite easy to tell by the language used and by how active the reviewers are. So it is a tough choice – between great, fantastic and wonderful! I remember choosing the company to take the tour of Salar de Uyuni in Bolivia – there the problem was exactly the opposite. For every company tripadvisor had a list of horror stories. I guess it does reflect the level of service and customer satisfaction in each respective country somehow.

A smiling guide picked me up in the morning from the hotel, holding my hand with his both hands, asking me lots of questions (yes, this is Indonesian hospitality). And soon we are speeding up the mountains in a minibus – myself, two Austrians and a Japanese girl. Almost right away we stop by this wonderful sun-drenched rice paddy: 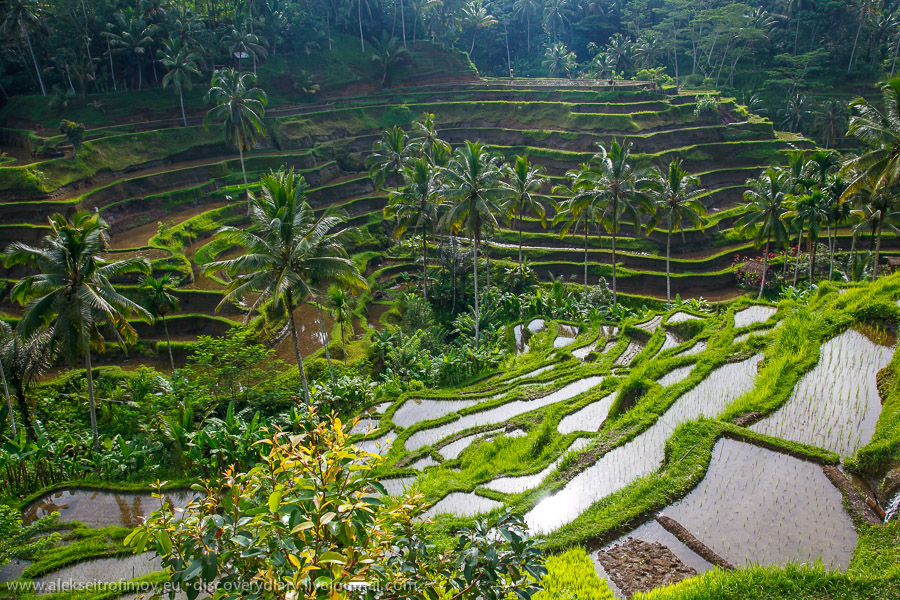 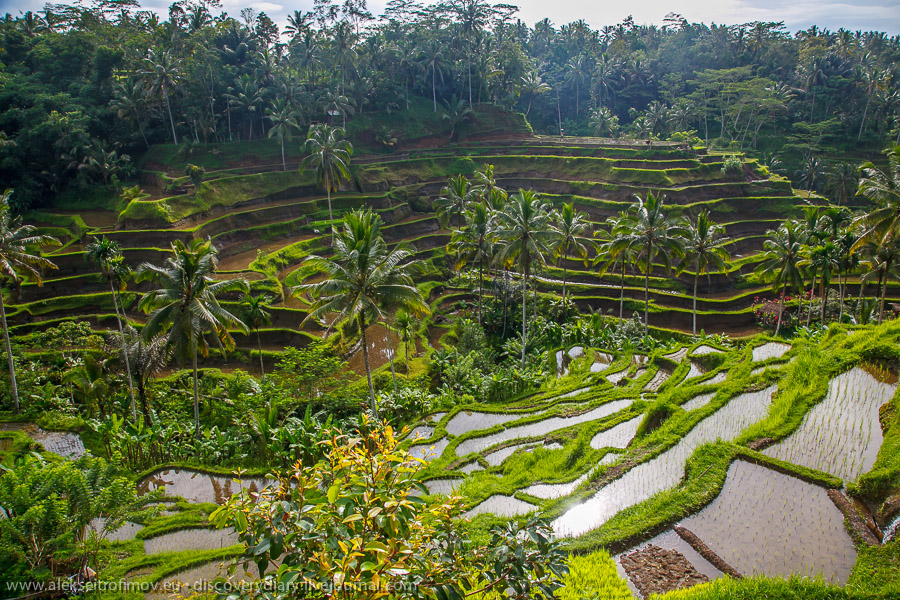 And off we go again among the green trees: 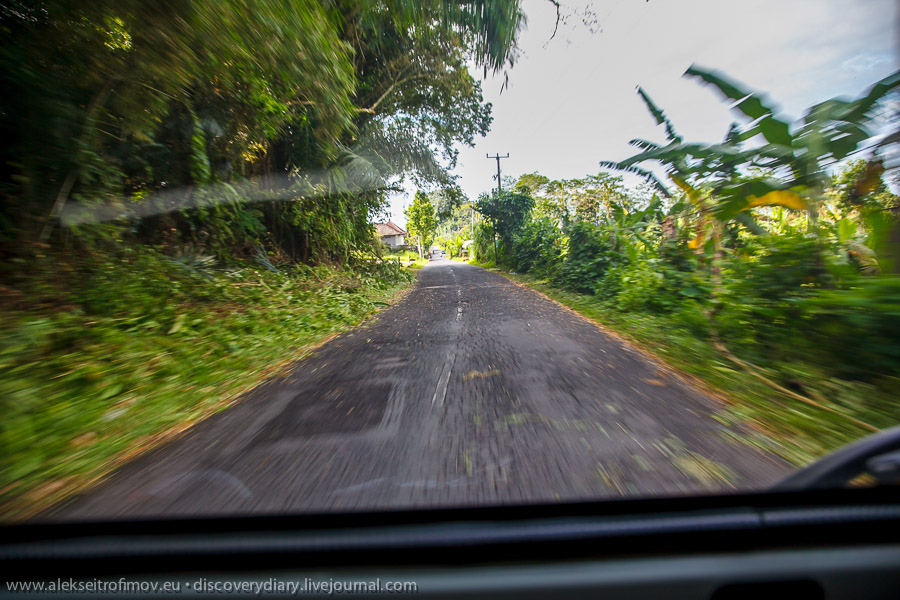 The next stop is the coffee farm. We spend about an hour there. The entrance: 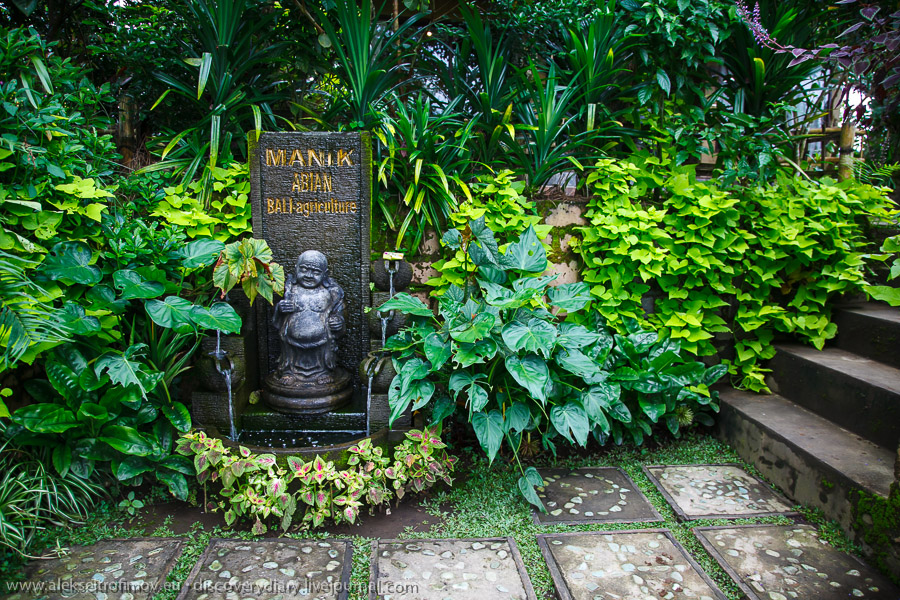 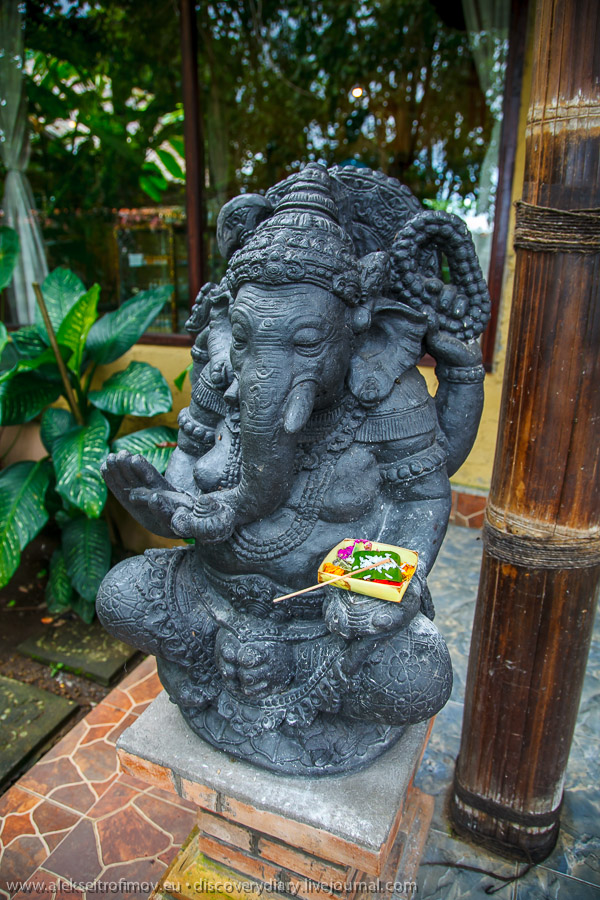 A young guide leads us through the garden demonstrating each plant that is cultivated there. Apart from coffee – two main sorts, arabica and robusta – you can see also vanilla, ananas and what not. 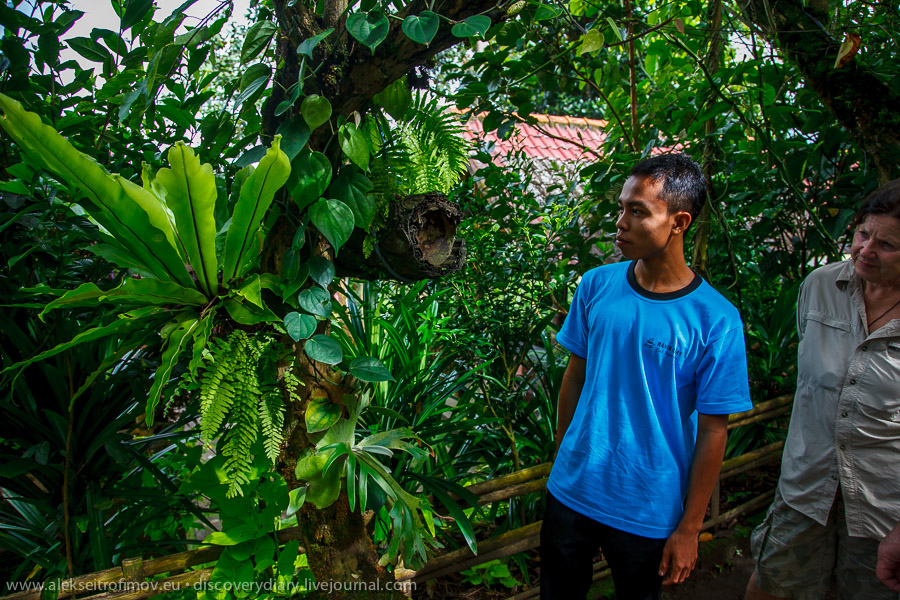 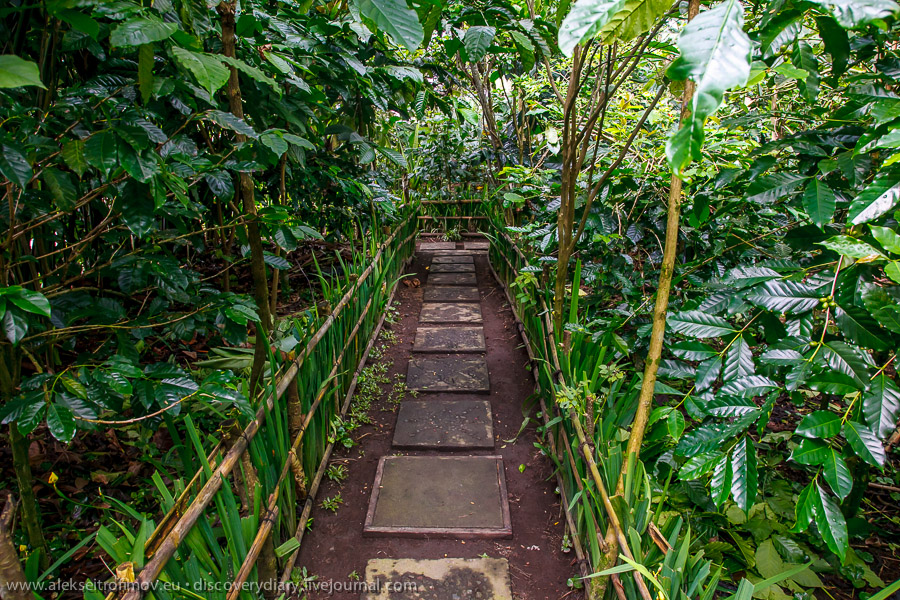 The coffee grains on the coffee plant: 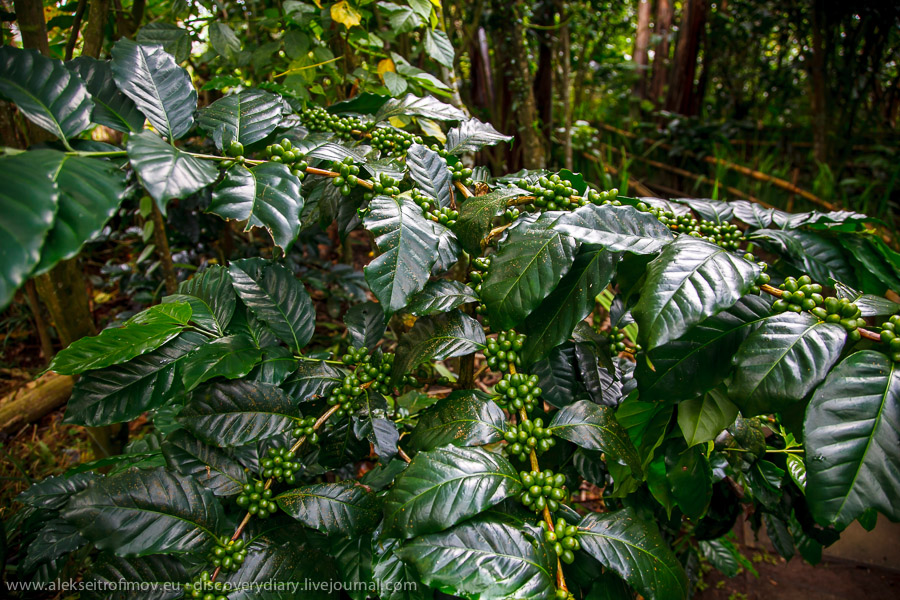 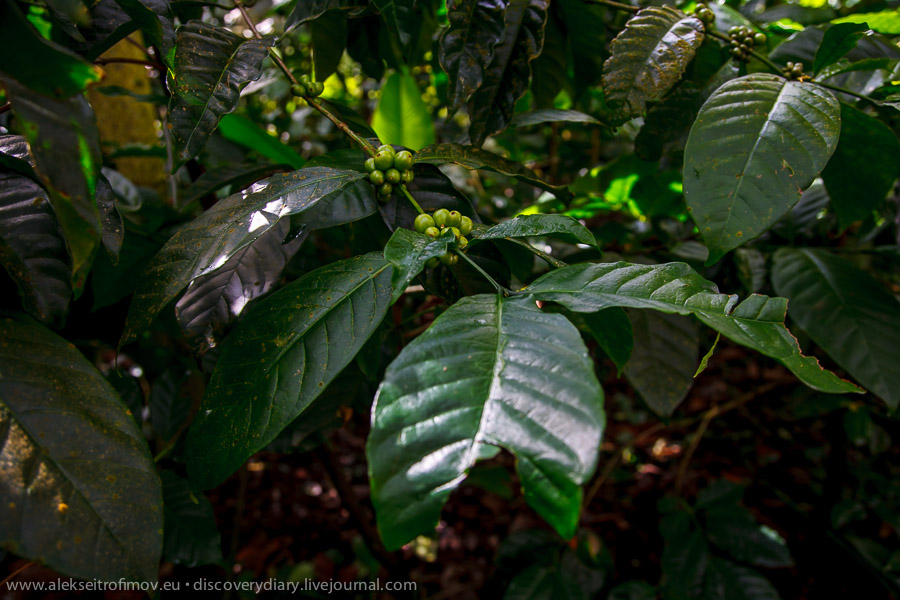 And finally the main number – the Asian palm civet, the little animal that plays the key role in the production of Kopi Luwak coffee, the most expensive coffee in the world. In the unlikely case you’ve never heard of it, Kopi Luwak is produced the follwing way. The coffee beans are fed to the civet. The animal eats them as it feeds itself on the flesh surrounding the bean. The bean itself is fermented with the animal’s digestive juices and obtains a particular taste. Our guide further insisted that the civet also would only eat the best beans, thus there is a second effect at play – the selective effect. After the digestion the beans are collected, washed and dried. Here you can see the normal beans as well as the beans “processed” by the civet (above): 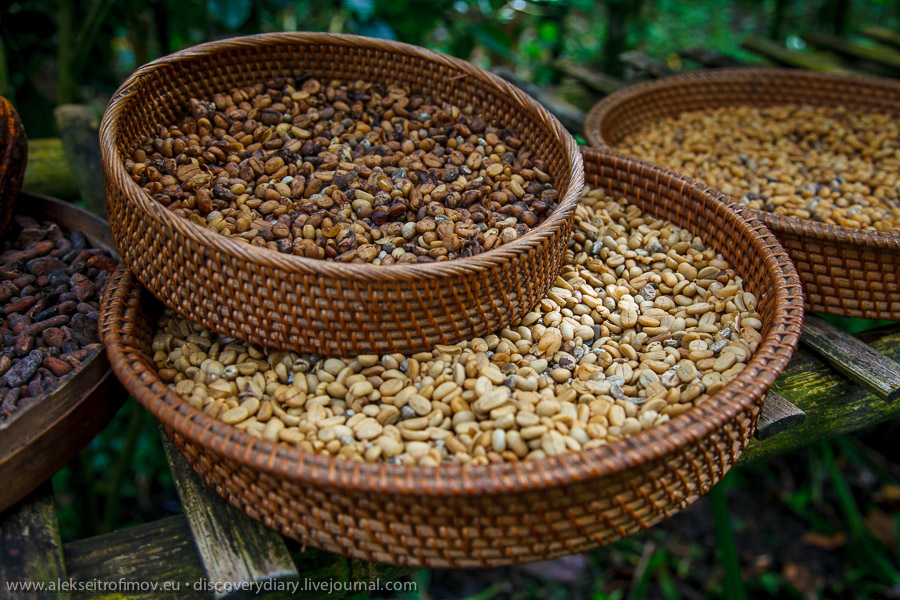 The civet itself refused to show its face to us on this sunny morning: 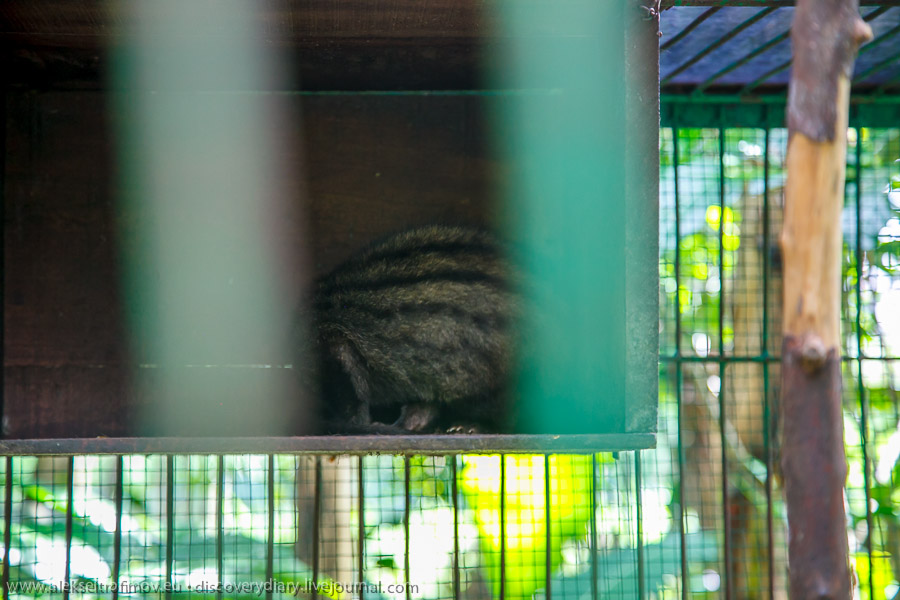 The drying of the beans: 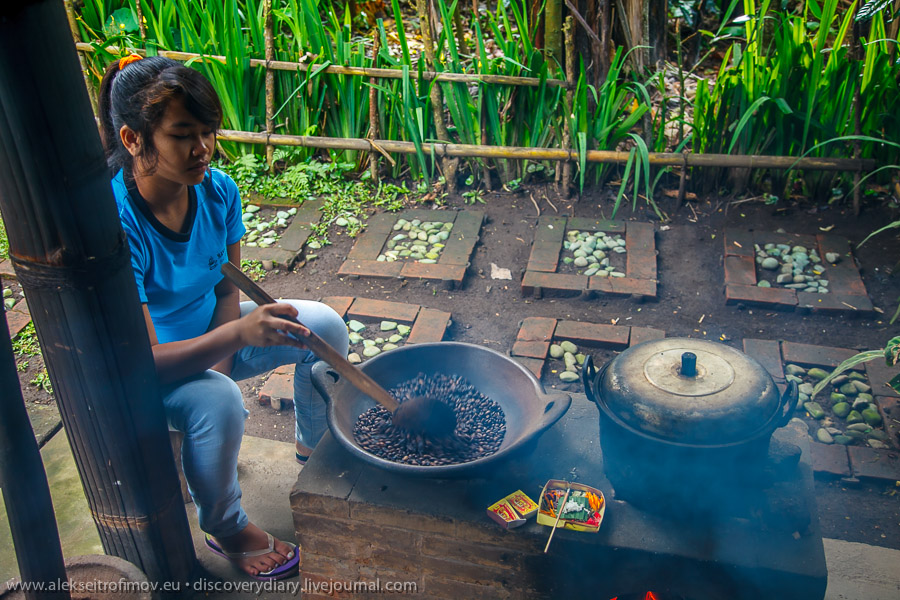 After the demonstration we had a chance to taste some of the coffees produced here on an open veranda. The view from the veranda: 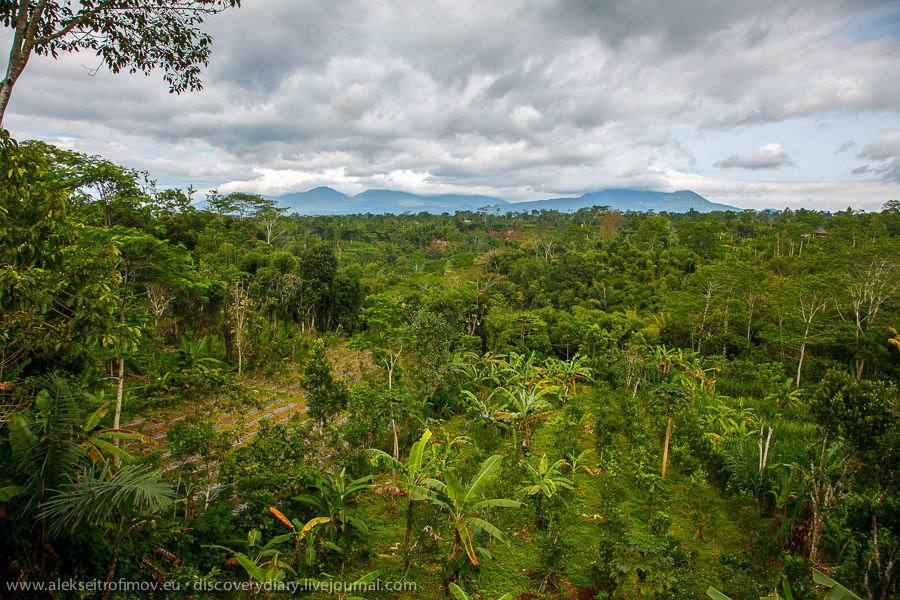 The menu on offer. The degustation of local coffees is included in the tour, you only need to pay extra if you want to try out Kopi Luwak. The giant sum of 50000 rupees is equivalent to 3 euros, so I went for it – though I’d already tried Kopi Luwak in Yogyakarta. 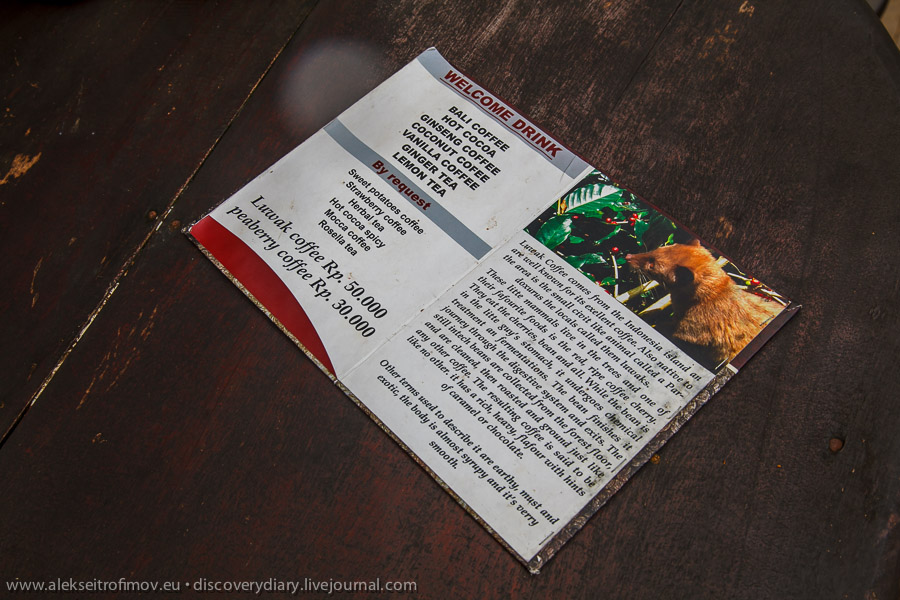 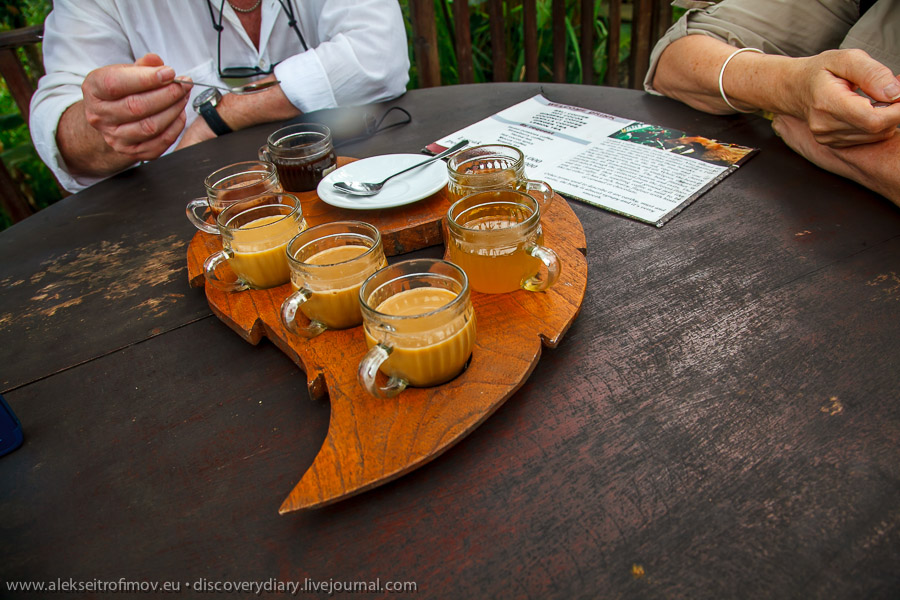 It corresponds to the list above in counter clockwise fashion. 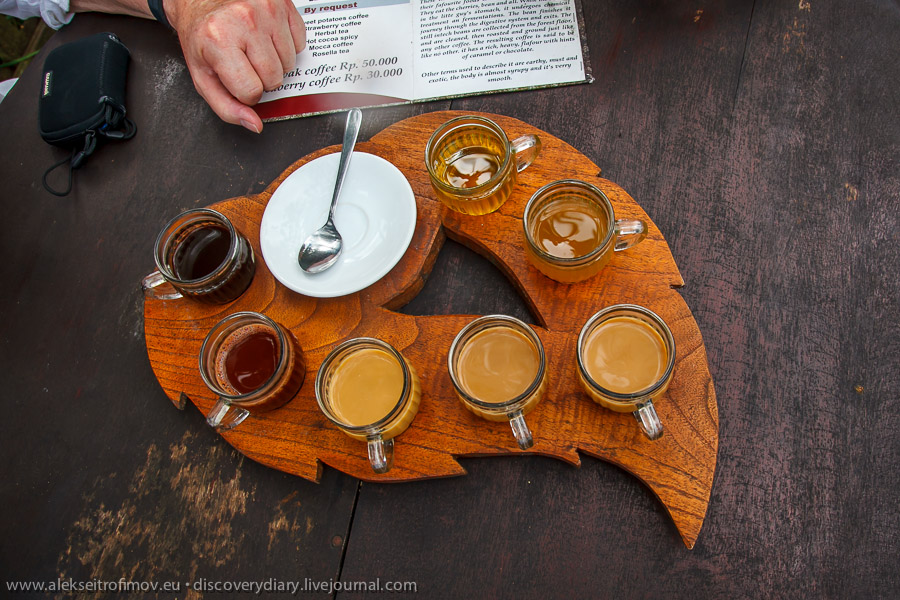 As you would expect, all four people in this group turned out rather crazy travellers. The Japanese girl was from Tokyo, she lives in Singapore teaching Japanese kids there English (quite a paradigm breaker for a Japanese girl!) The Austrians are even crazier, they’ve travelled all of South East Asia and were telling me about their adventures in remote corners of Vietnam and Indonesia. 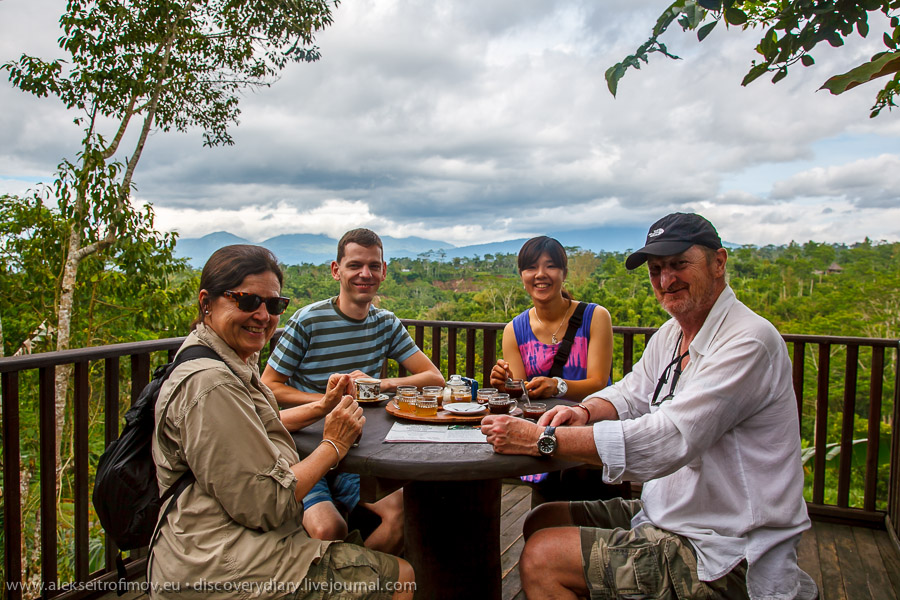 My Kopi Luwak. It does have a particular interesting taste. Of course it is a triumph of marketing. Great brand promotion! 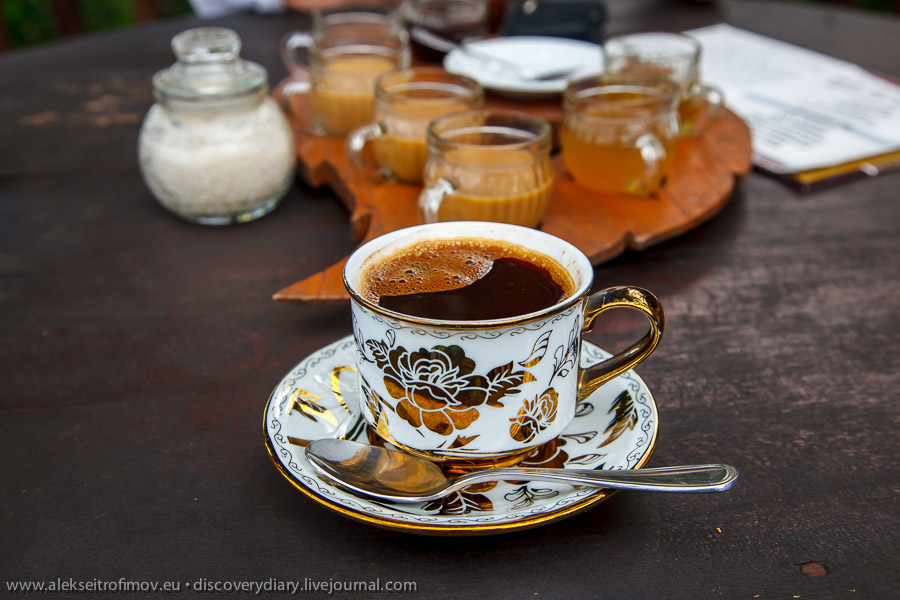 After visiting the farm we board the microbus which takes us to the village of Kintamani. It is located on the ridge of a large crater surround the Batur volcano. We eat breakfast in a little café with the following view. Of course we all sat in a raw by a windowsill facing the volcano. 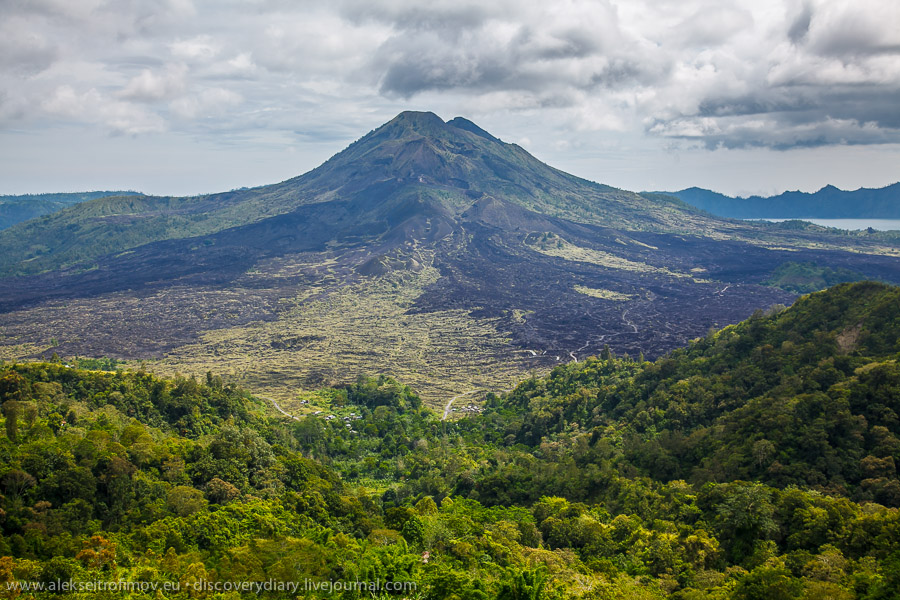 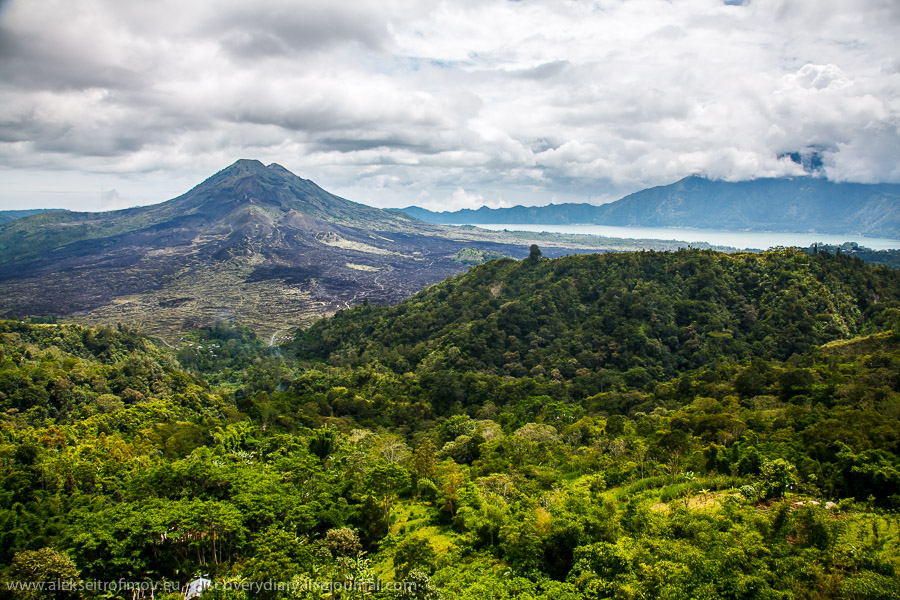 In Kintamani we start the actual bike ride, a long ride down to Ubud. It is a several hours drive, though physically a very easy one – the only muscles that tires is the finger, as you have to constantly hold the brakes.

One of the stops is the temple where large spiders live. 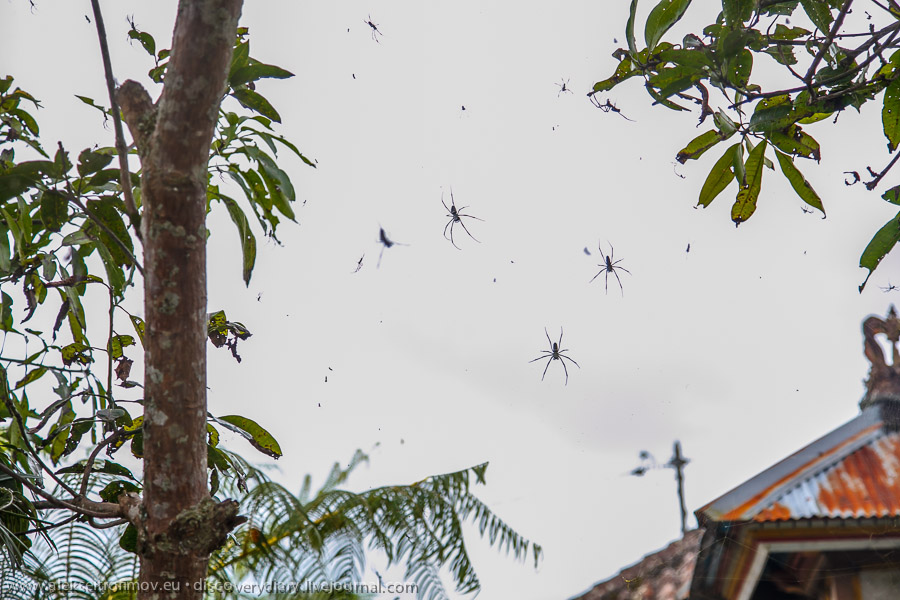 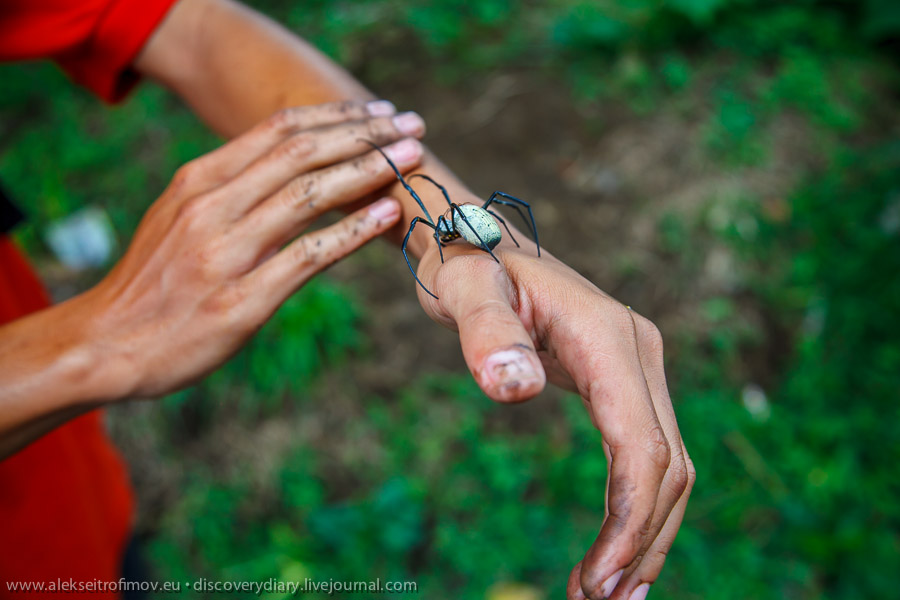 Here the spider is moving down my arm. Their legs are surprisingly strong, you feel as if they glue themselves to your skin: 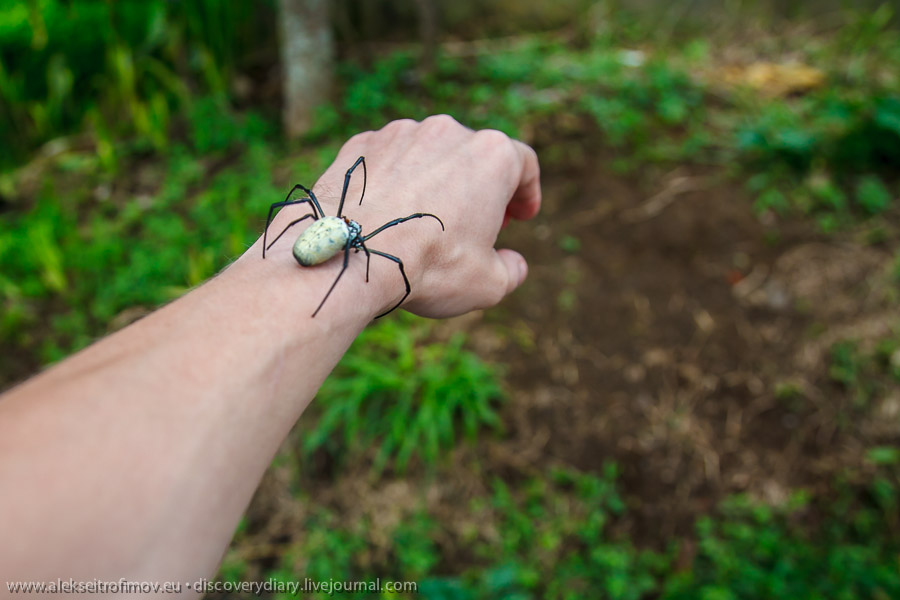 The guide tried to photograph me with the spider but focused on our Japanese friend instead: 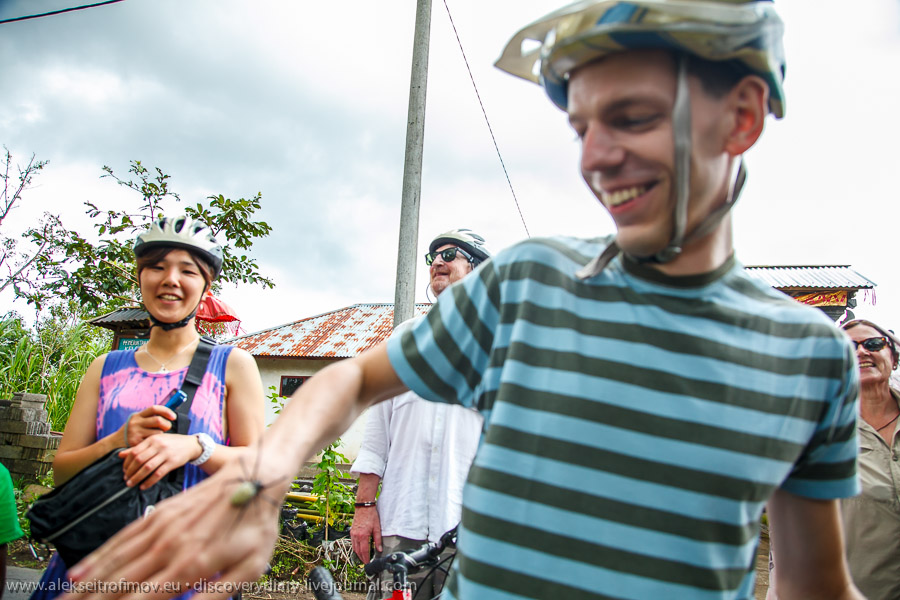 We visit a normal Bali house, where the guide’s family lives. The internal courtyard facing a house temple. It is quite surprising that there is a temple inside every house. How much space is wasted! The gates in front lead to the temple. 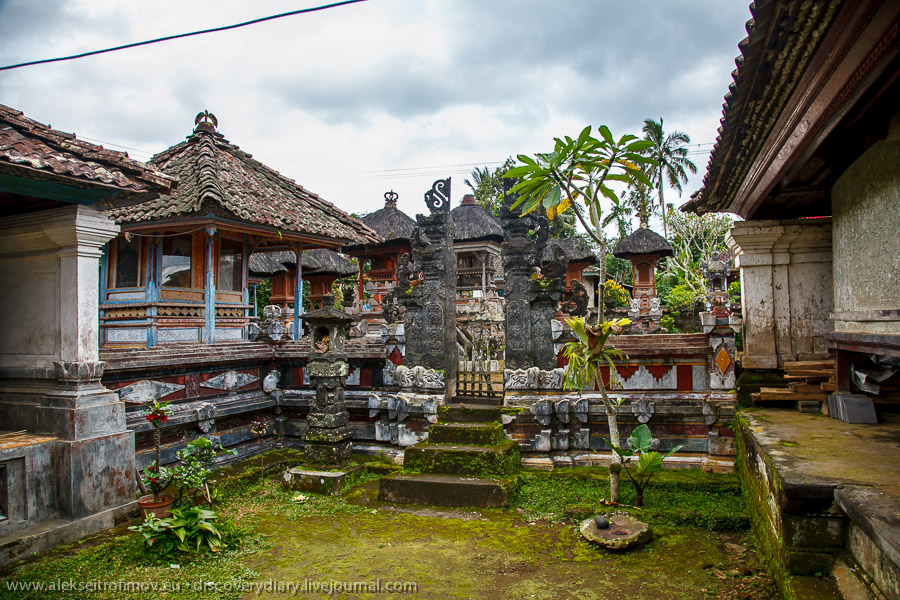 A traditional kitchen – the guide’s parents still use it, although there is also a modern kitchen. 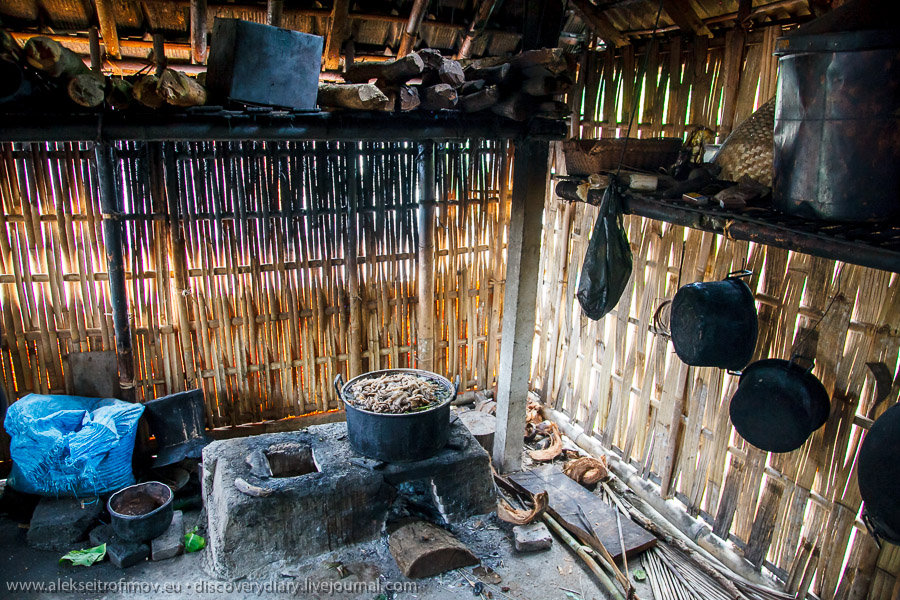 Finally we reach the rice paddies. You have to really pay attention as you bike between them – I was on the verge of turning myself over a few times, to the guide’s horror. The Austrian guy did manage to fall and get some rather spectacular bloody stains on his leg. 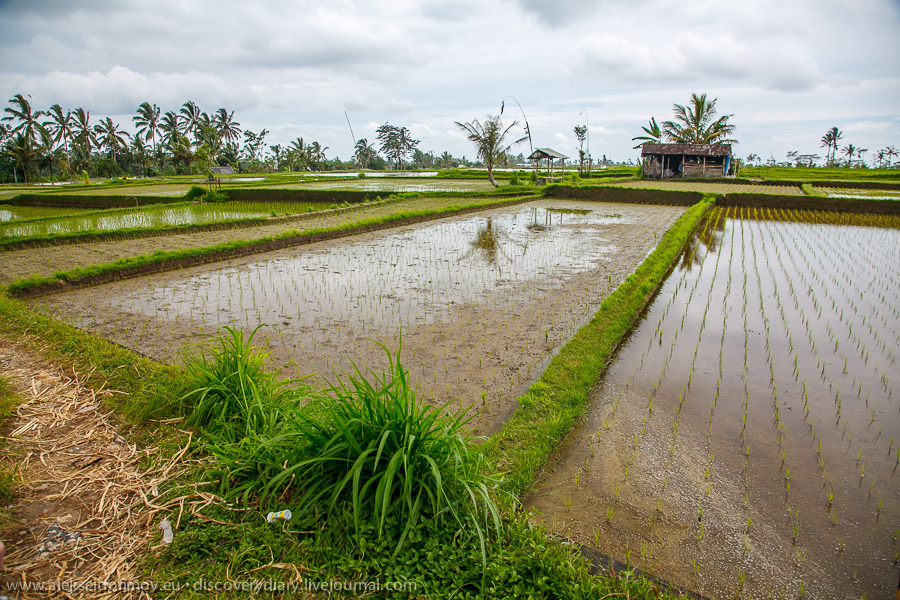 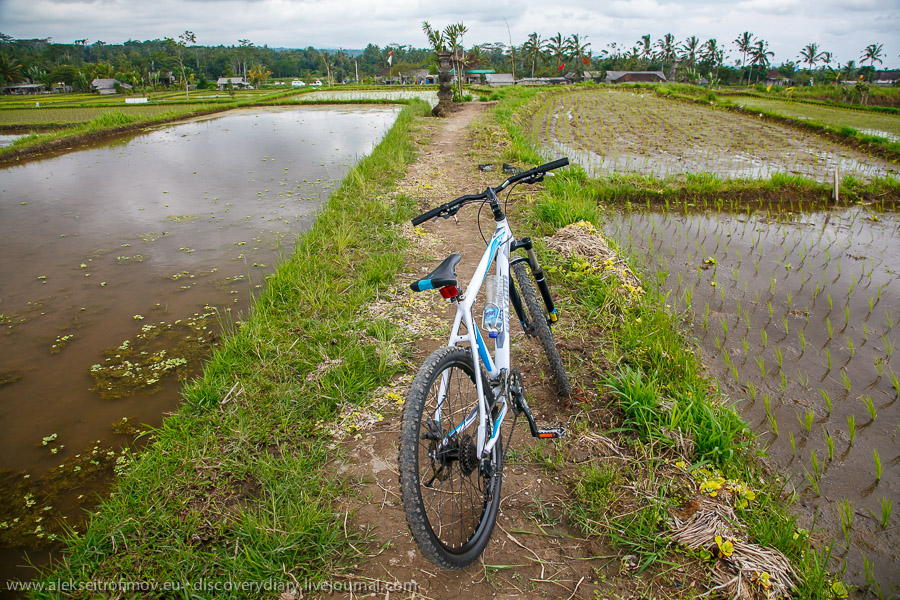 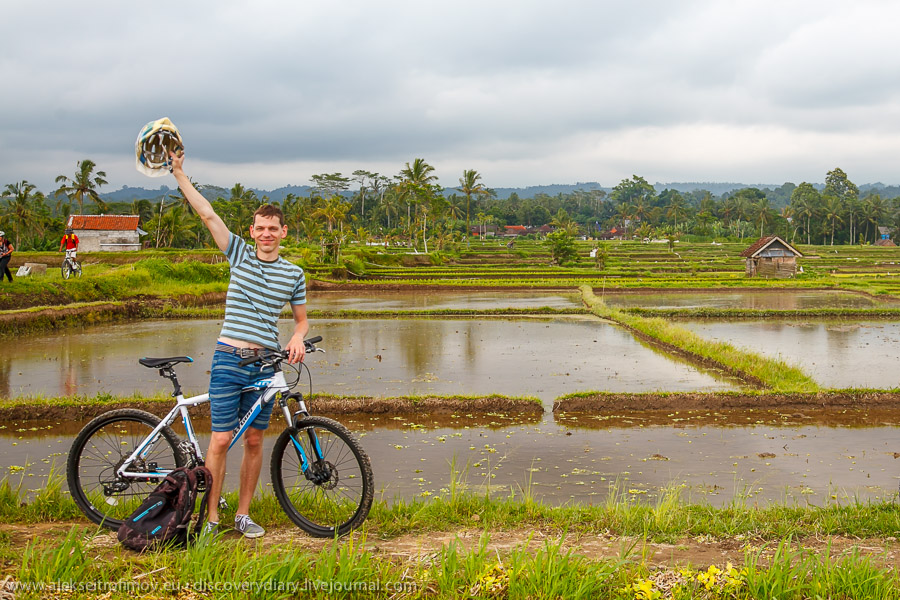 Finally the tour is concluded with a traditional lunch in the company owner’s house. All of it is accompanied with typical Balinese smiles and hospitality. The price of the tour is quite absurd too – comes down to 22 euros. Writing this in New Zealand, this sounds like a joke. Yeah, Ubud is seriously lovely. 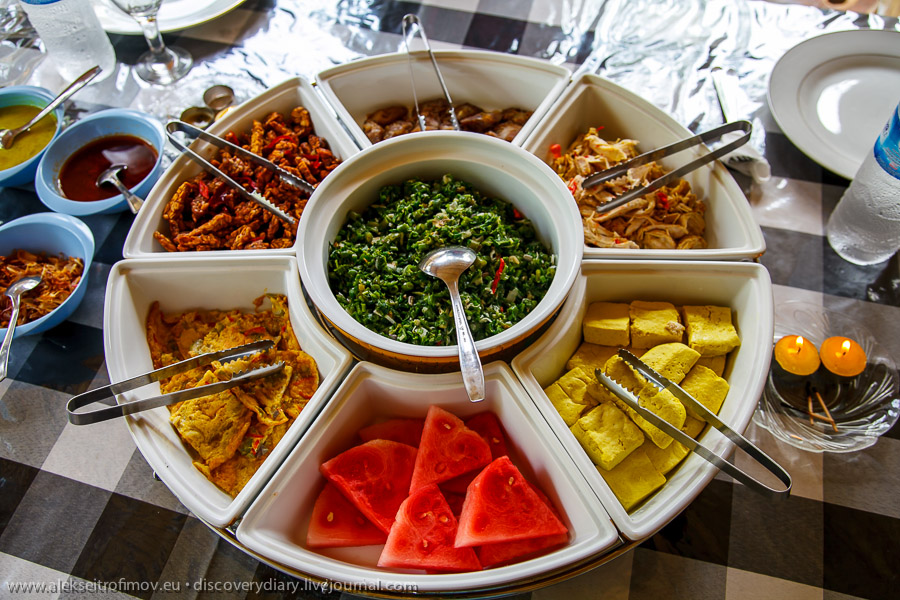 One thought on “Ubud’s rice paddies on a bike”