This is penultimate post about my trip through New Zealand. After climbing the Franz Josef glacier in a helicopter I headed further South, to Tanaka and then to Queenstown. The adrenalin capital of New Zealand, Queenstown allowed me to experience one of the world’s highest bungy jumps – see I jumped the Nevis. It is also possible to visit Milford Sound on a one day trip from Queenstown.

Milford Sound is a legendary, fairytale place. Rudhyard Kipling called it the eighth wonder of the world, and it is New Zealand’s top tourist attraction. The most famous of New Zealand’s Great Tracks, Milford track, finds its crescendo right here. It is actually quite some way from Queenstown – several hundred kilometres. Thus to get here in a day you’ve got to spend about 13 hours. The road winds through the New Zealand’s Alps. The views are to die for: 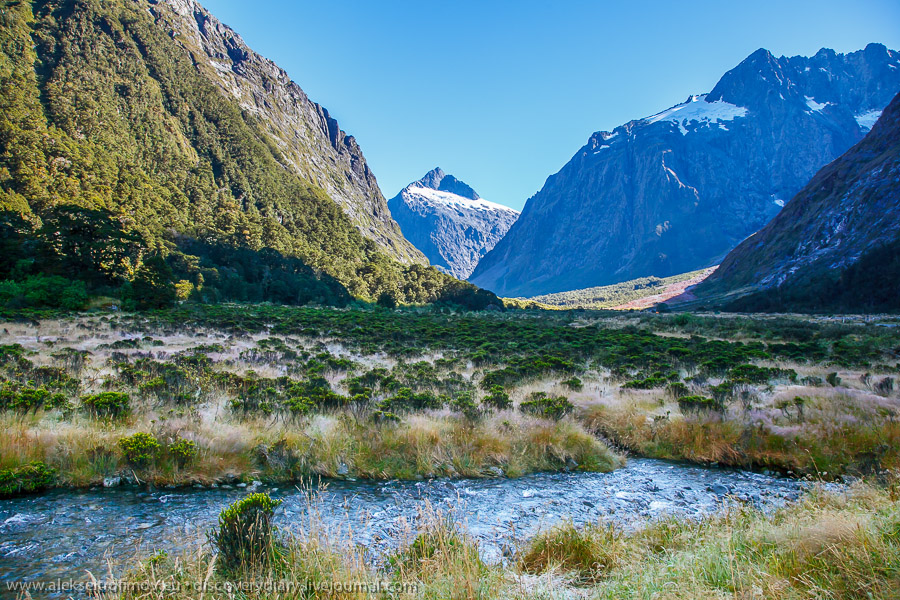 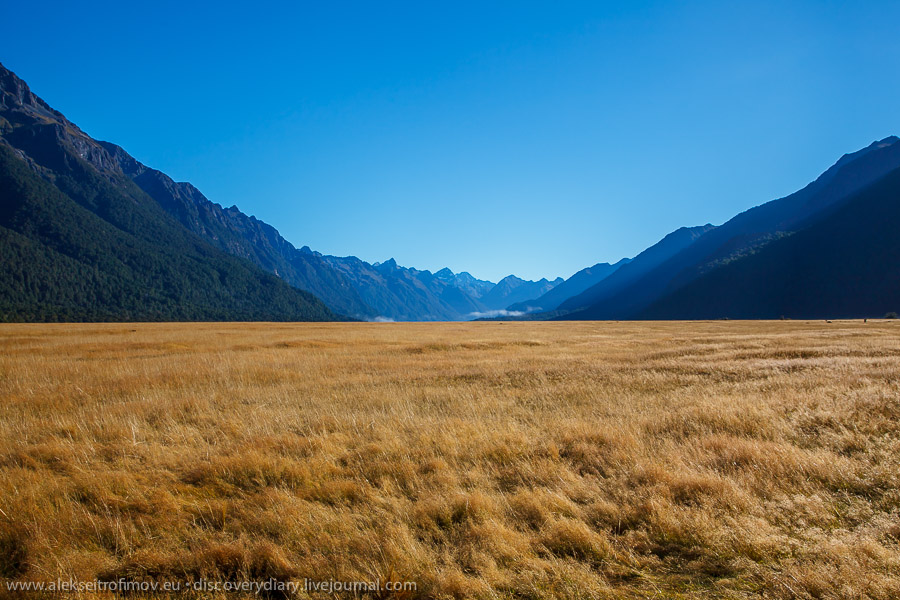 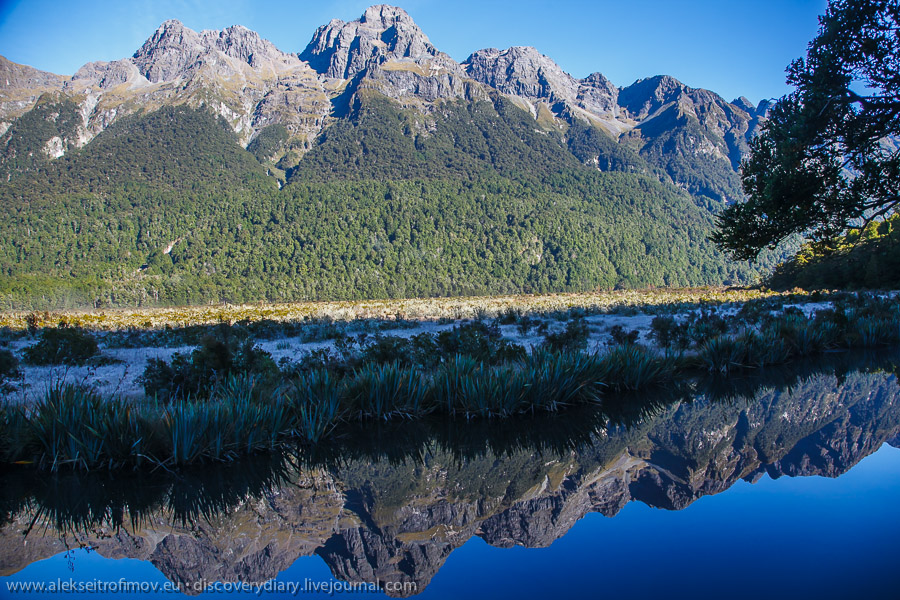 A couple of times the road does go through the tunnels built inside the mountains. The guide told us that the road from Queenstown could have been shortened by an hour or two if several more tunnels were built – but a conscious decision was taken not to do so in order to preserve the unique and remote feel of Milford Sound. 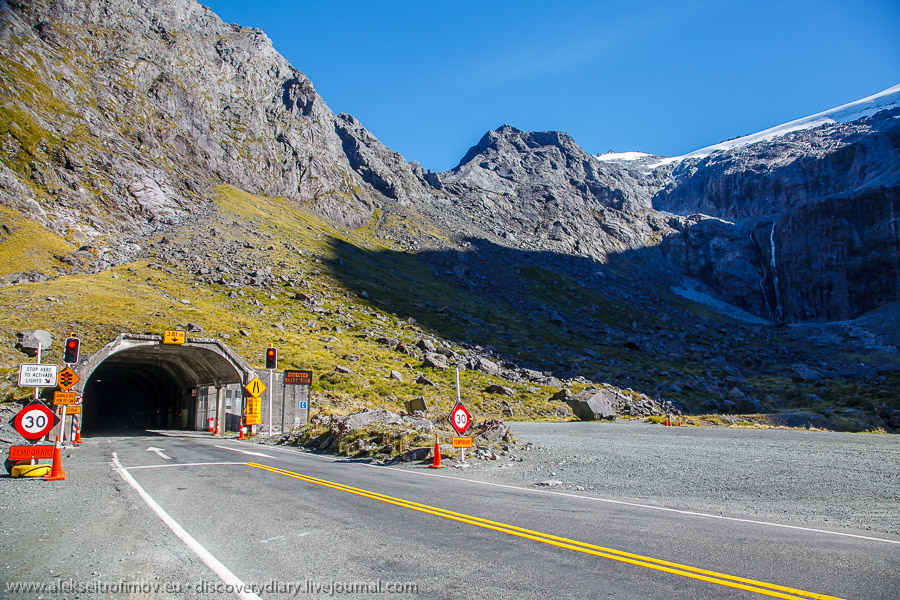 The one day visit is built on the formula bus-ferry-bus. When I arrived in the fiord, I happened to have an hour before the start of my ferry trip. My first impression of the famous Mitre mountain that gives Milford Sound its instantly recognisable look: 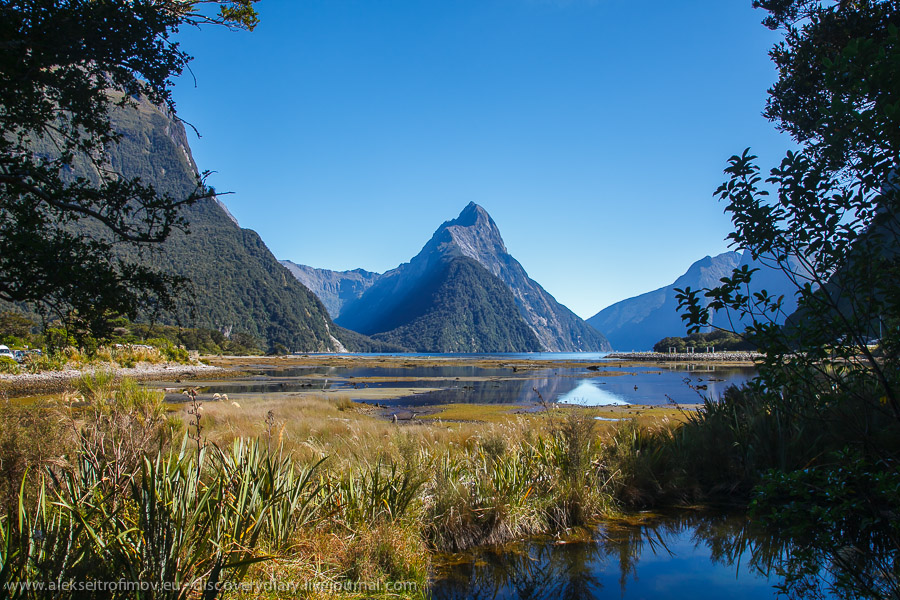 A special pathway is built to allow for short walks on the shores: 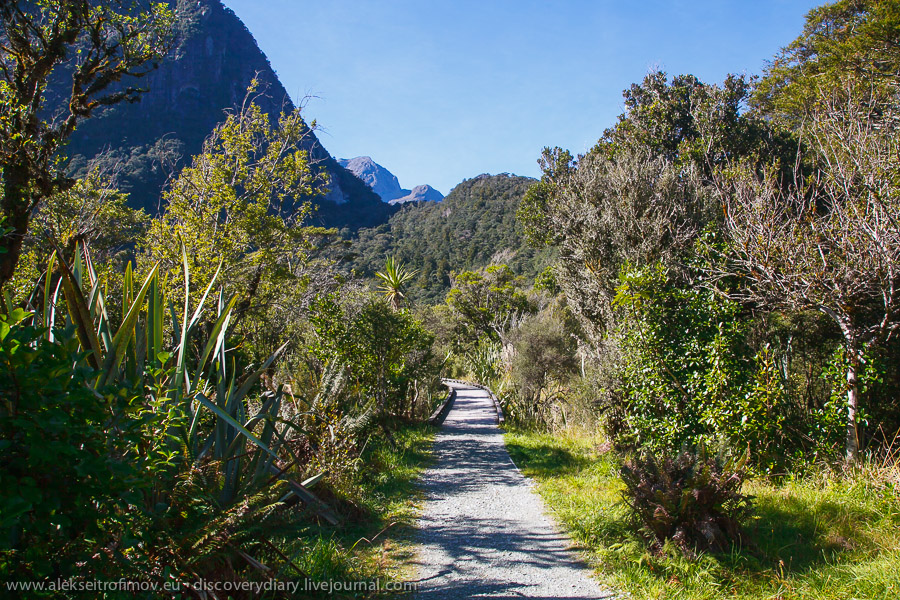 After the walk and a coffee I boarded the ferry and off we go towards the Southern Ocean. 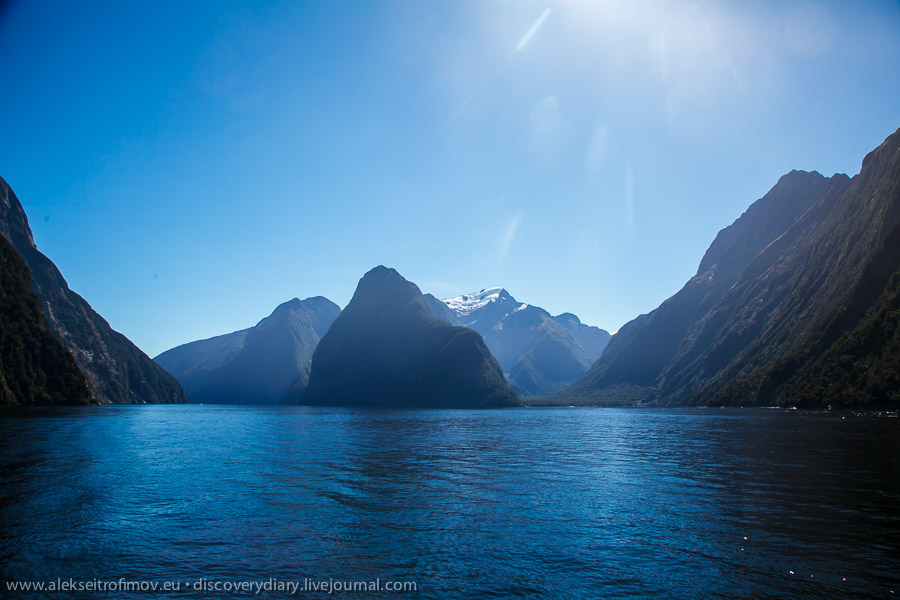 The name “Sound” in Milford Sound is in fact an error. “Sound” is a bay formed by the river estuary. Milford Sound is really a fiord, i.e. a valley formed by a glacier. Early discoverers made the error as they incorrectly determined Milford’s origin. Indeed most Sounds in the South of New Zealand are really fiords. 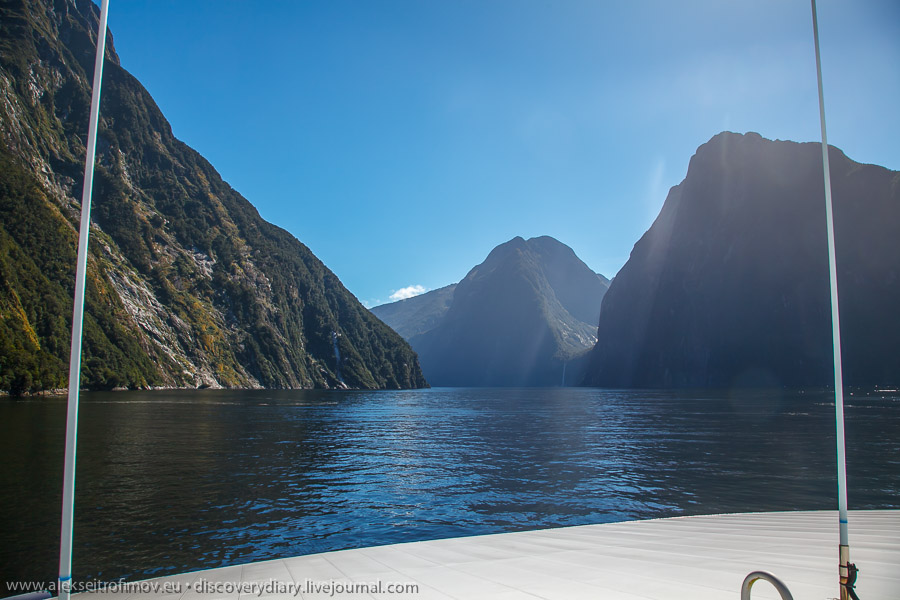 All the time I was in Milford Sound the sun was shining with barely a cloud in sight. We were told it was extraordinary lucky, as there are only 7 such clear days per year. Milford Sound is the rainiest spot in NZ. 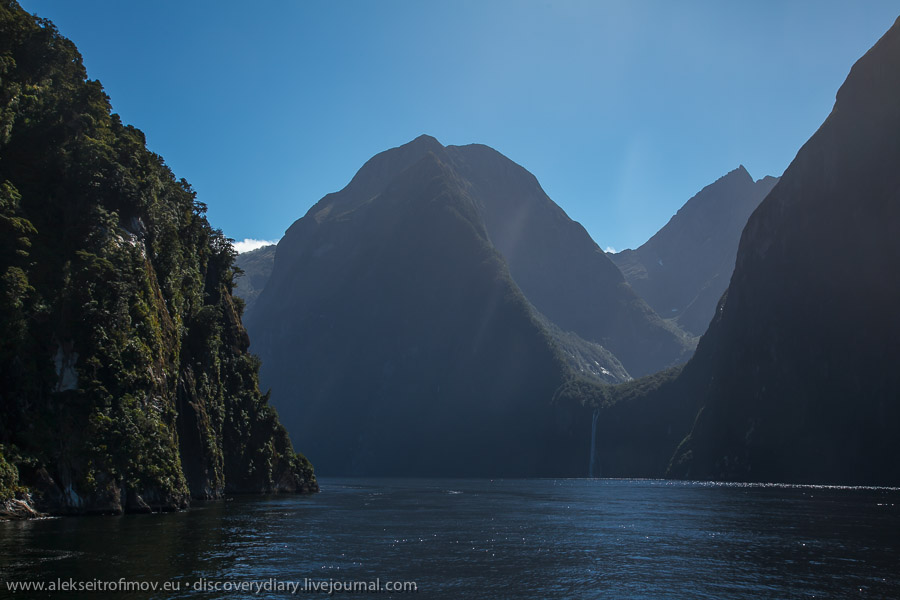 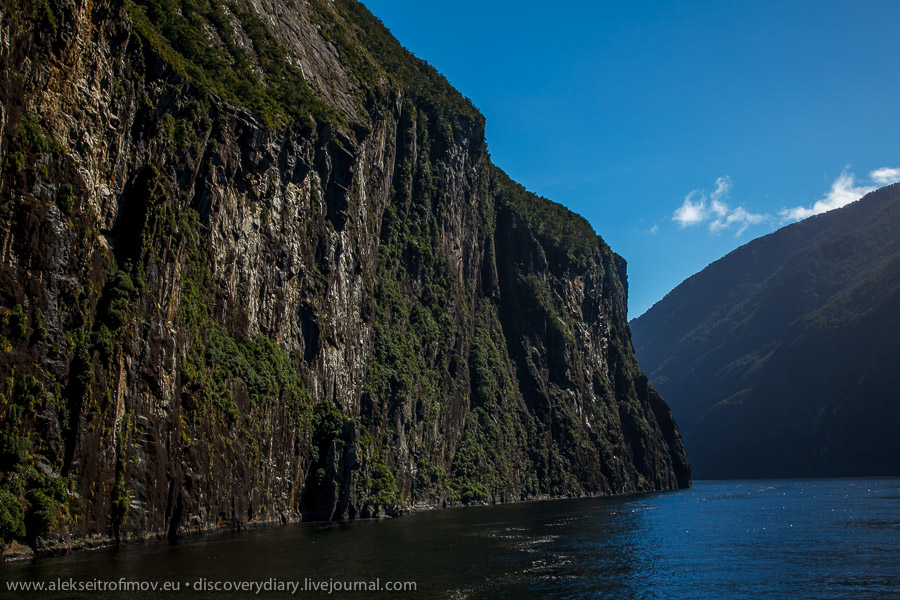 These steep walls were formed by the advancing and retreating glacier thousands of years ago. 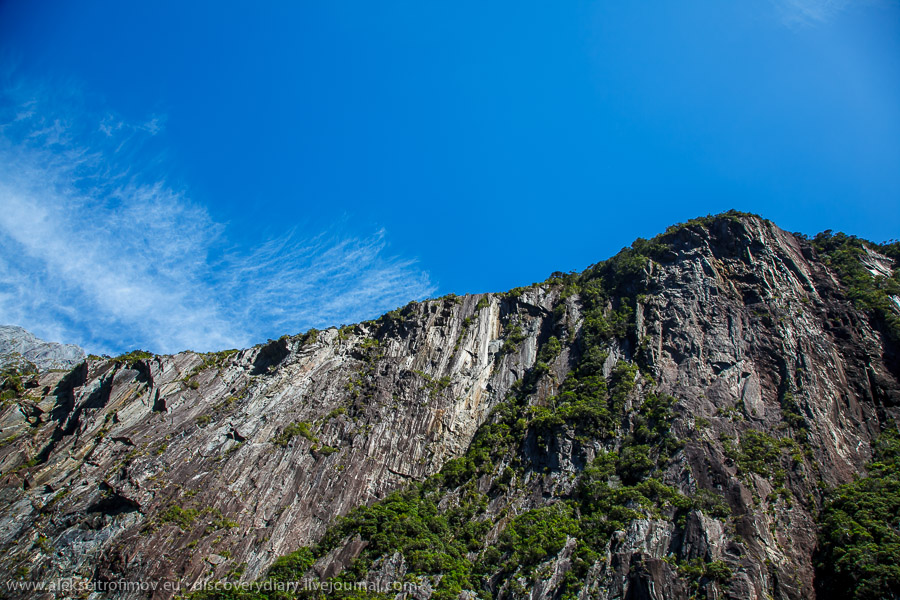 The top deck of the ferry. I stayed there the whole trip, although to my surprise many of other travellers were playing cards on other decks. 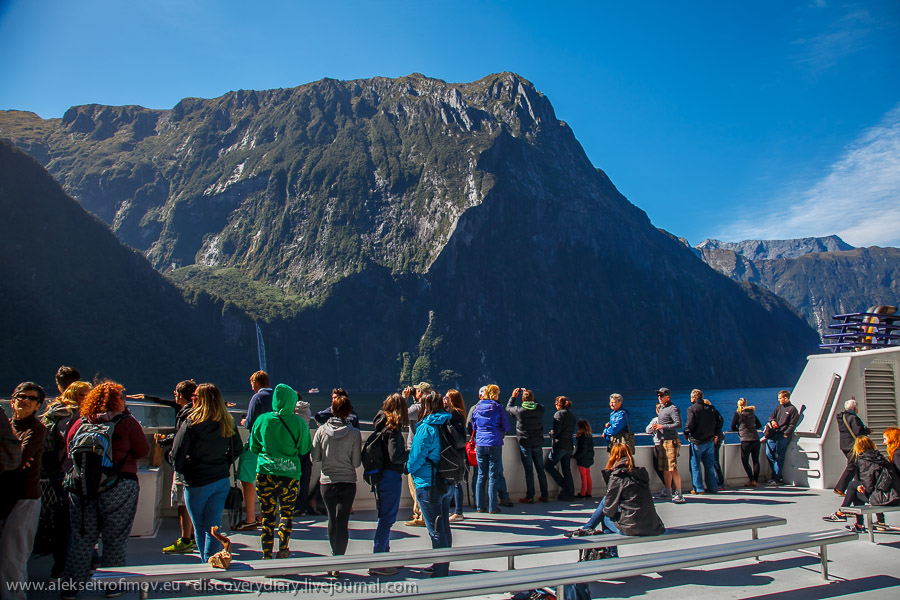 On the rocky outposts we noticed with delight the original inhabitants of the place – the seals! 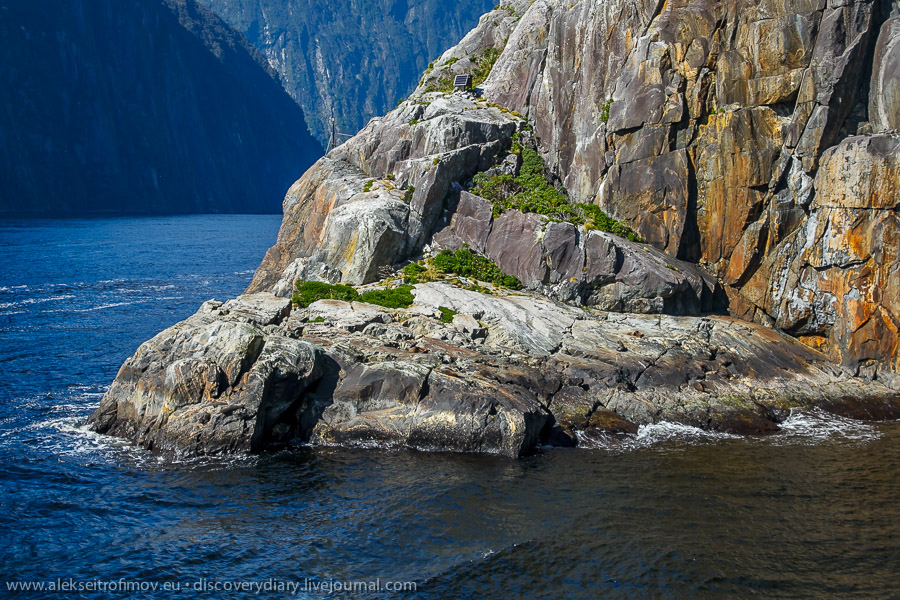 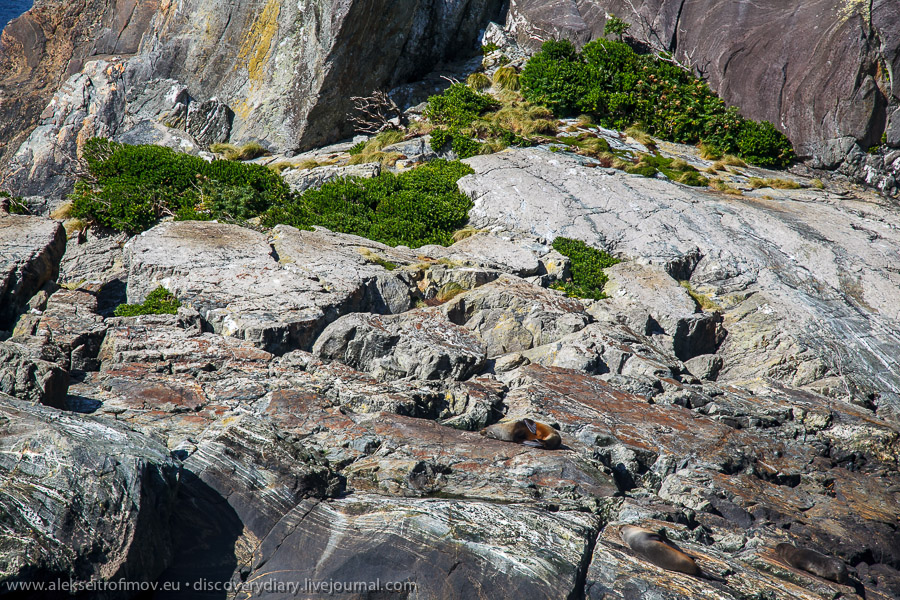 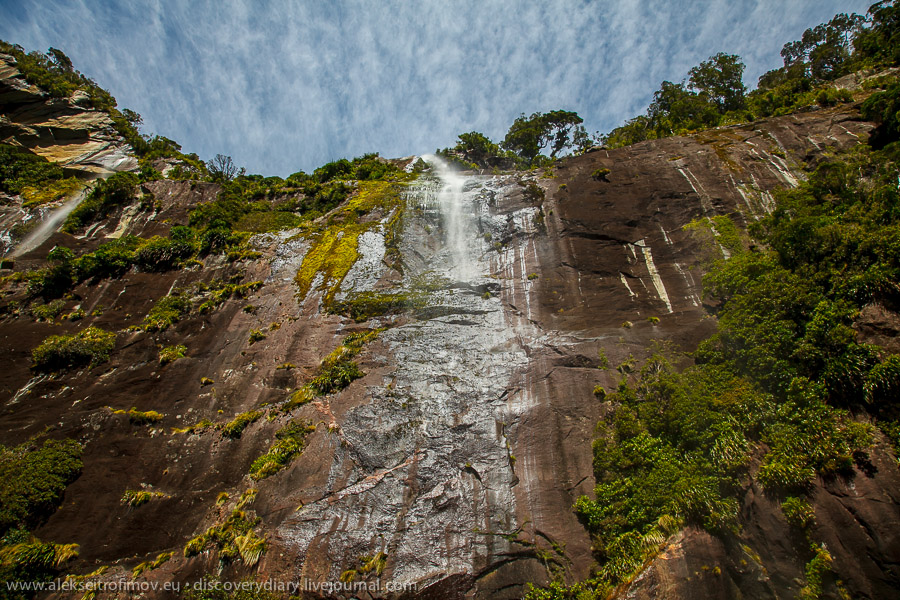 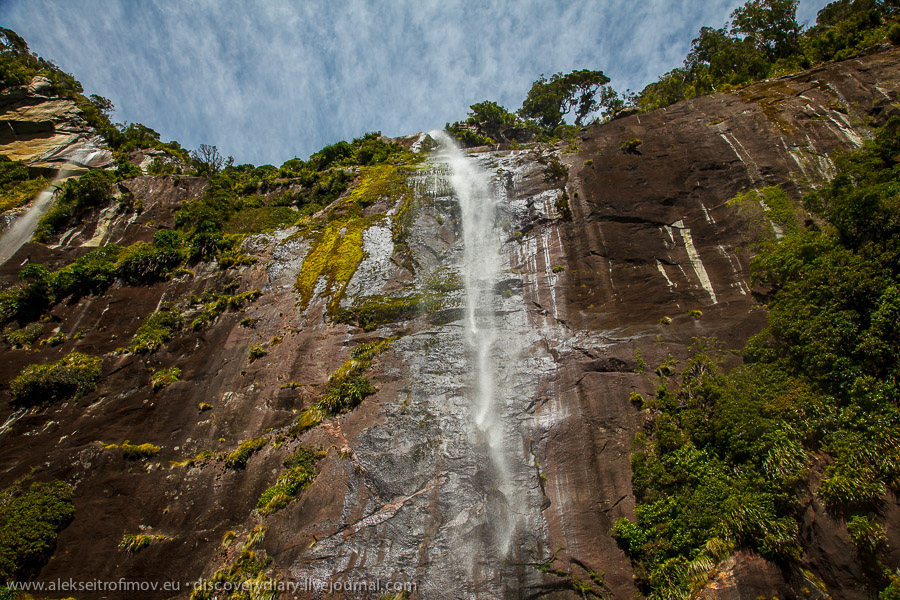 And a rainbow at its bottom. 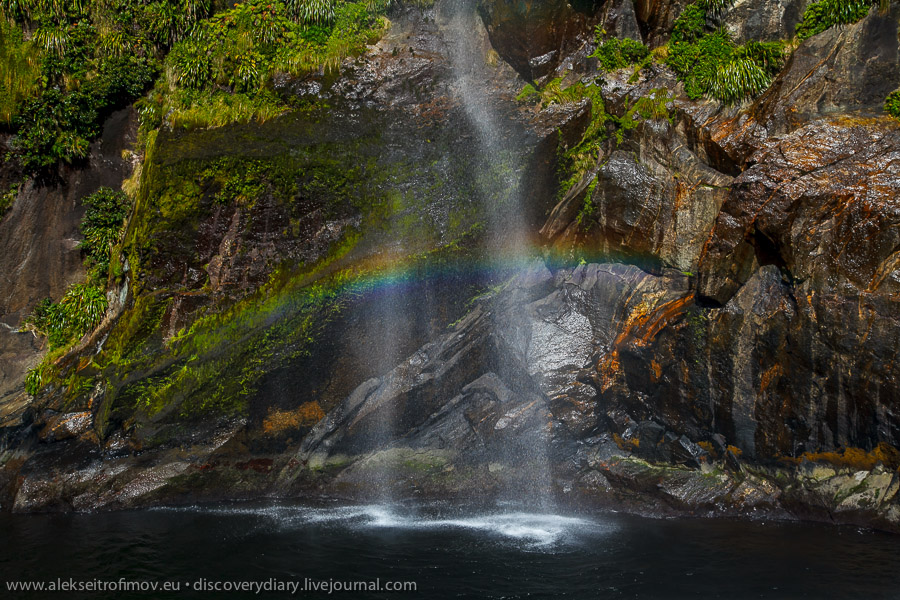 Finally we approach the mouth of the fiord – the exit to the open sea. 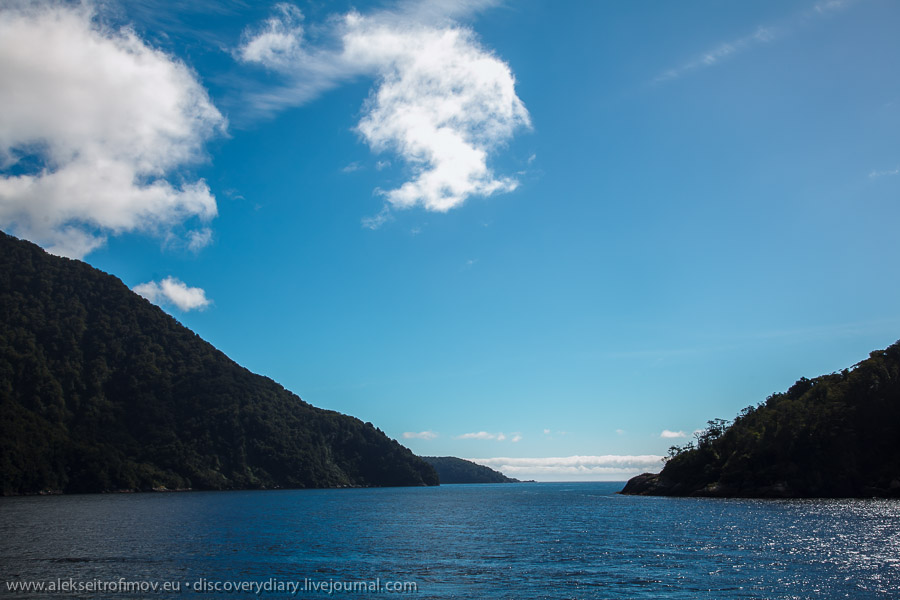 It is the Tasman sea. If you look at the map, you will see that in practice it is open ocean, symbolically limited by Australia on one side and by New Zealand on the other. Thousands of kilometres between them. 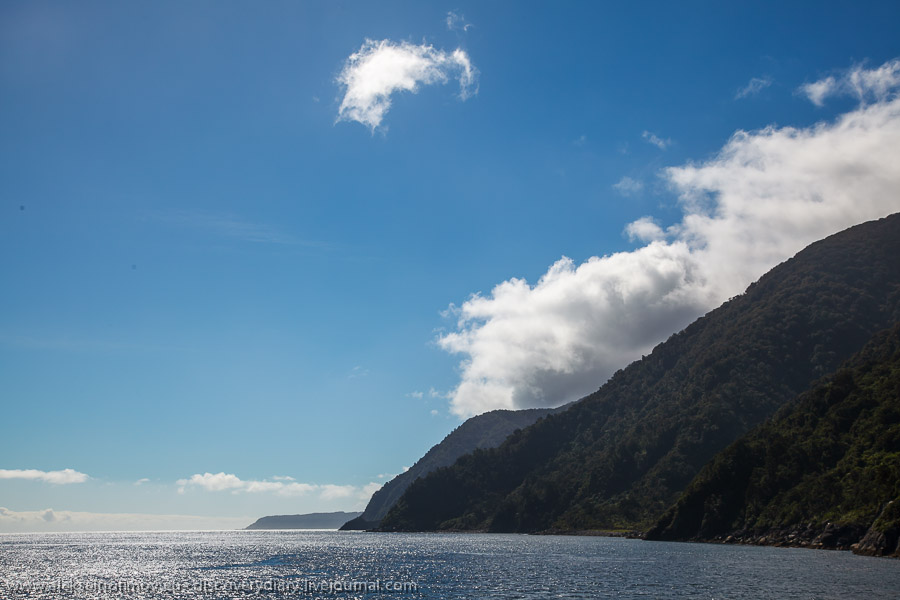 Back to Milford Sound: 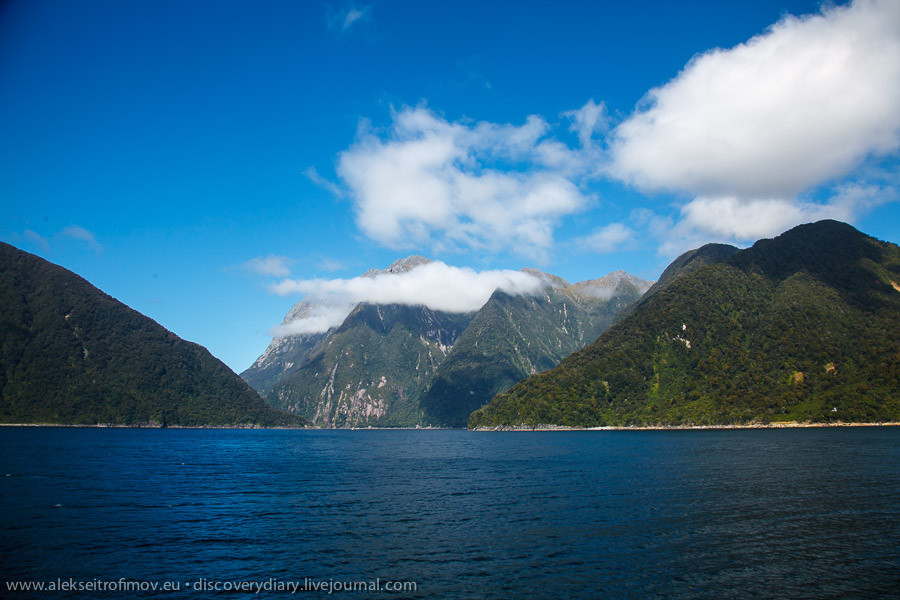 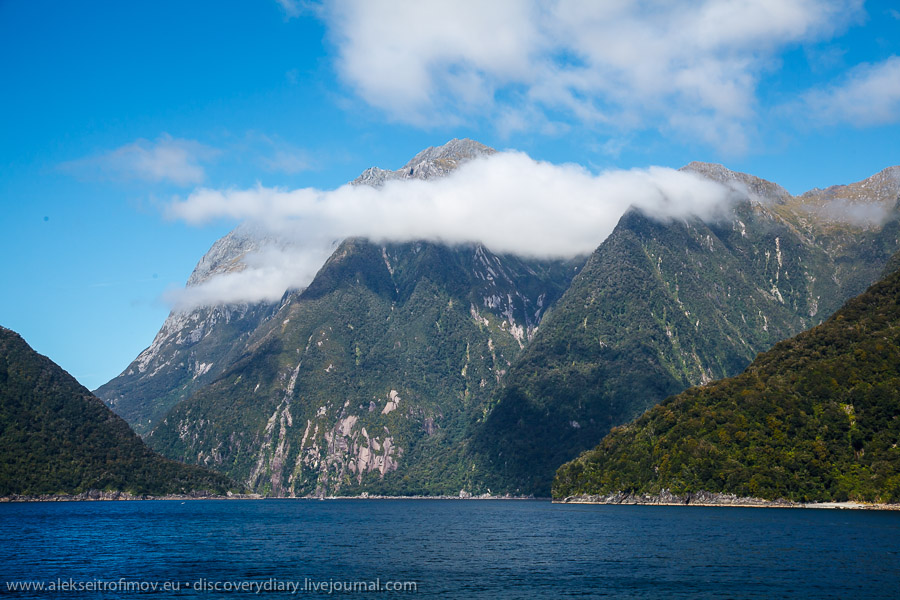 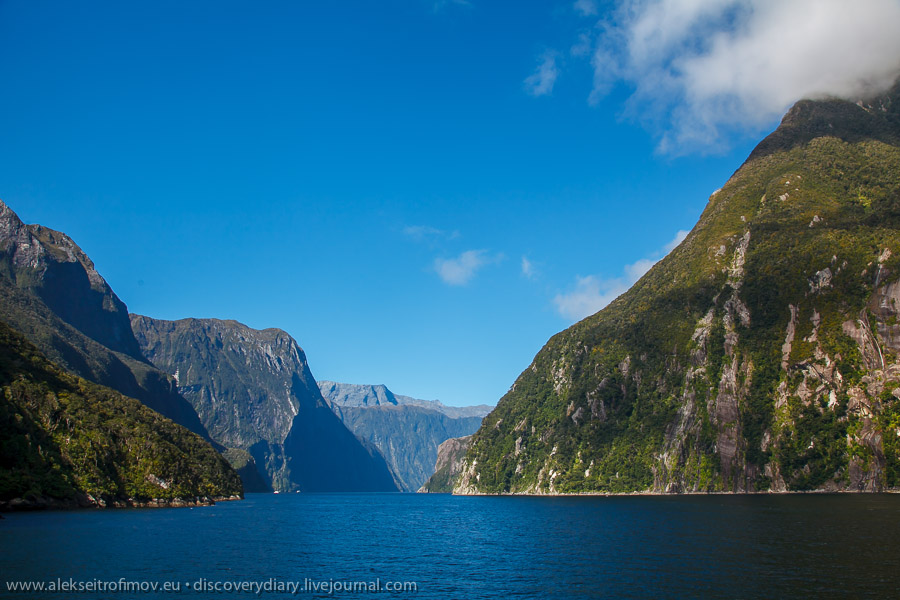 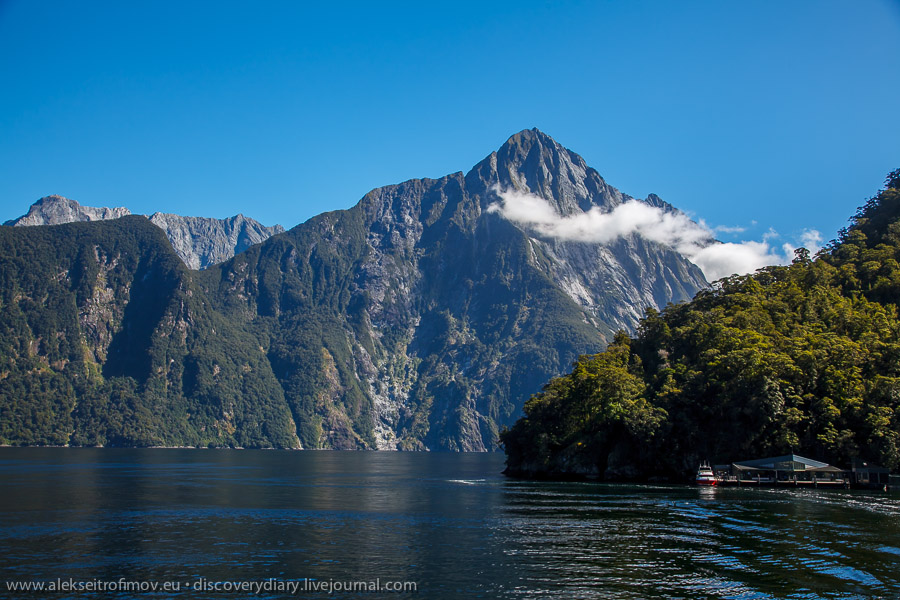 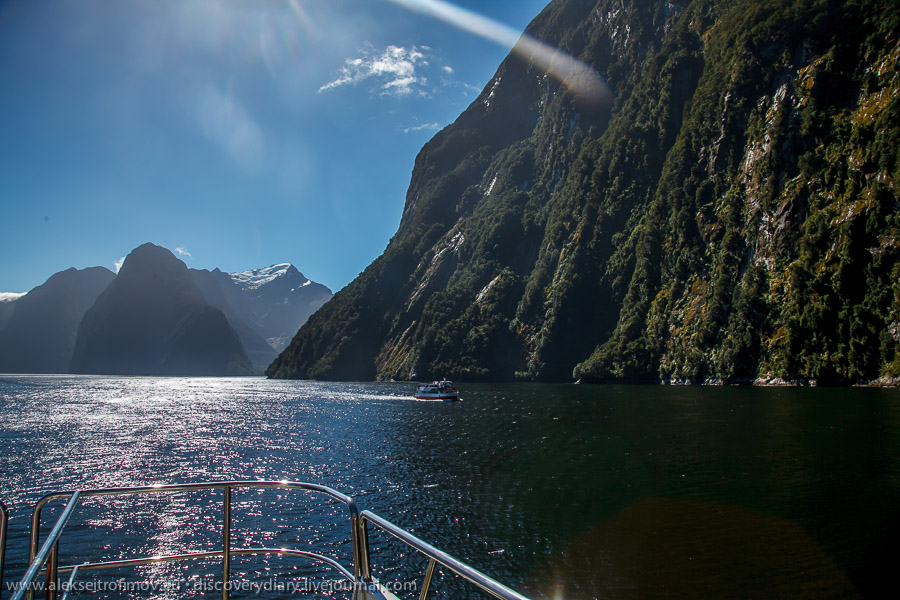