Fellow travellers often ask me what was my favourite country on this trip. I usually pick one, not to be boring, but very honestly there has not been a single country I didn’t like or I didn’t feel like I wanted to come back to. There were three countries that I found difficult – those were Bolivia, USA and Indonesia. But even there I got some pretty unique experiences, perhaps the most memorable of the trip. I was thinking about all this today as I was walking to the top of Mount Victoria, towering over Wellington, the wind-swept capital of New Zealand. And I was inspired to wonder about my favourite country by the admiration I feel for New Zealand. It is a true heaven on Earth. I can easily understand why for example one German friend of mine spent six months hitch-hiking around it. As for me though, I have about six times less time for this beautiful country.

I was looking through the photos from various episodes from my trip and at the spur of the moment I processed the Tongariro crossing photos. I just could not resist. So I will publish them now, out of order, just because they asked for it. I did the Tongariro crossing the next day after skydiving, out of the same little place – Taupo. At that time New Zealand was being taken over by the cyclone Luci, which was expected to cover the North Island with incessant rain and fog on Saturday. On a day like this Tongariro crossing would definitely be closed. I was lucky to make it on Friday, and on that day the weather was wonderfully sunny – a mint day for doing the crossing.

Tongariro Alpine crossing is a trek of around 8 hours duration through volcanic desert. The length of the trek is 19.4 km. The path first climbs rather steeply up and then descends slowly on the forested mountain slope. There is no public transport and therefore you have to organise specialised transport. A minibus picked us up in Taupo at 5h30 in the morning and we were at the start of the trek at 7. The last bus leaves at 16h30, if you miss that you are in trouble. For those who are a bit crazy or in very good physical form the trek features a couple of diversions, of which the most titillating one is the possibility to climb Mount Ngauruhoe. This volcano is most famous for representing Mount Doom in the Lord of the Rings trilogy. Frodo climbed it in order to rid Middle Earth of the Ring forever by throwing it into the flames. The climb of Mt Doom is around 3h return, and it is in addition to the main trek.

The first look at the trek early in the morning. 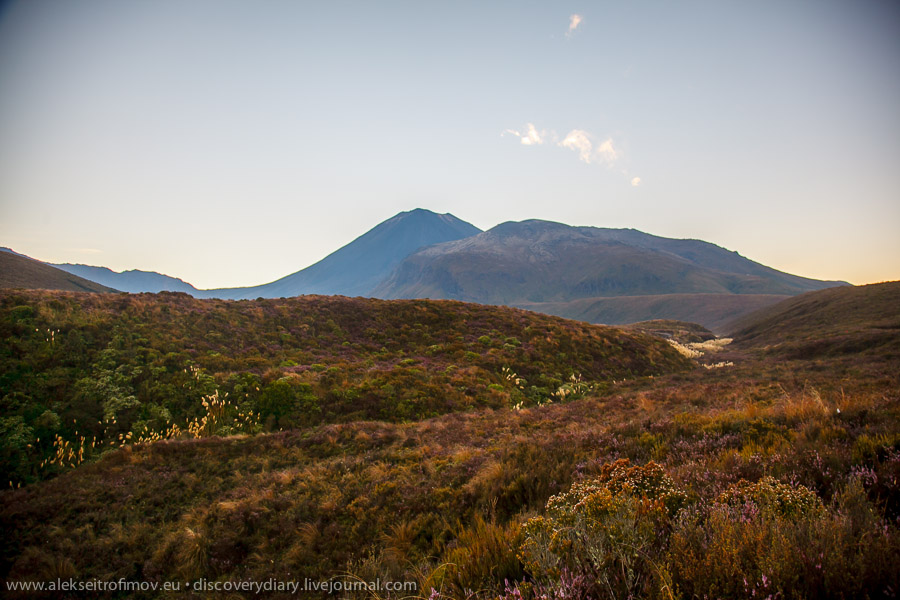 Looking from that point in a different direction, you can spot Mt Ruapehu – the highest mountain on the North Island. A local friend told me that it was really worth visiting it as the snow had already fallen, but it was not within my reach. Here it can be seen between the tall grass. 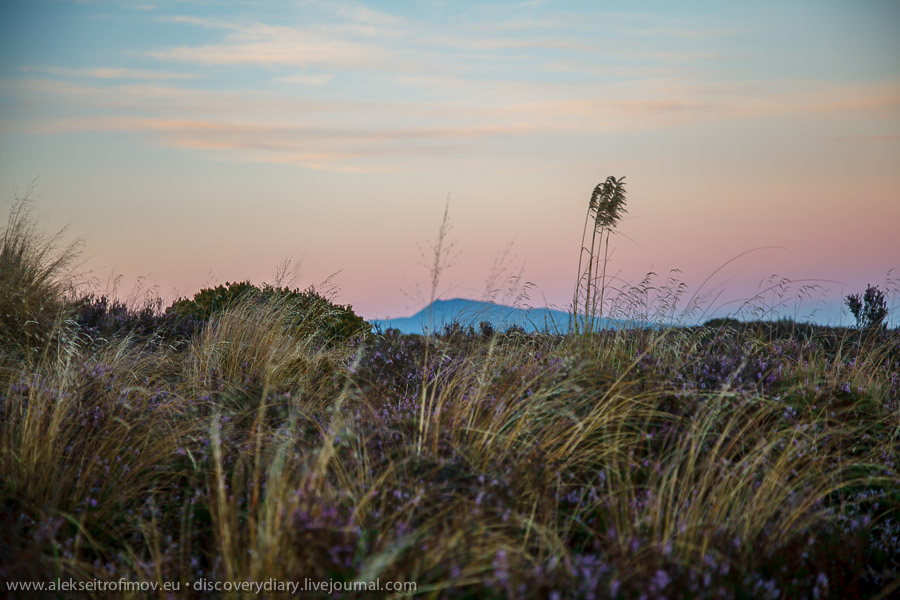 Our group embarks quickly on our path towards Mt Doom. As I am travelling around New Zealand on a Kiwi Experience bus, most of my co-travellers fall in the age range 18 to 25. I am used to being one of the first if not the first to arrive at a final destination in most groups, but in this one this is by no means certain – the boys offer up a good speed. 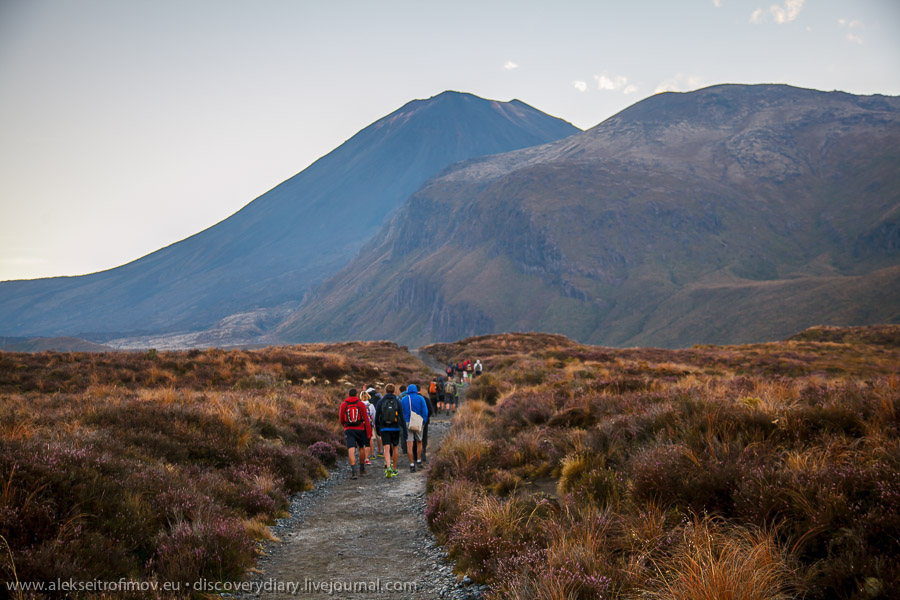 And here is the point where you decide if you will attempt the climb or keep on the main track. Of course I choose to climb. 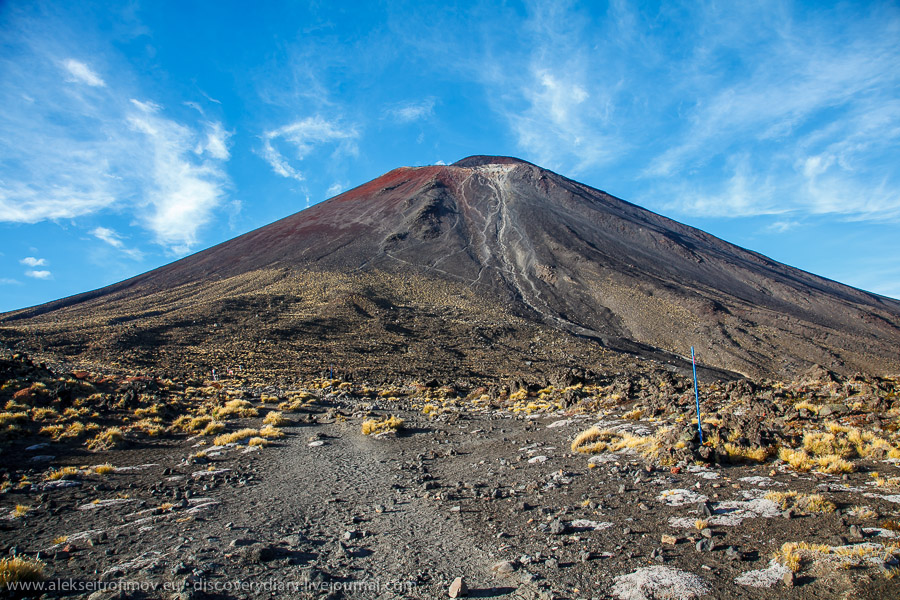 The almost vertical traces on the volcano on the previous photo are the actual paths that you take as you climb it. The views just a little up the pathway: 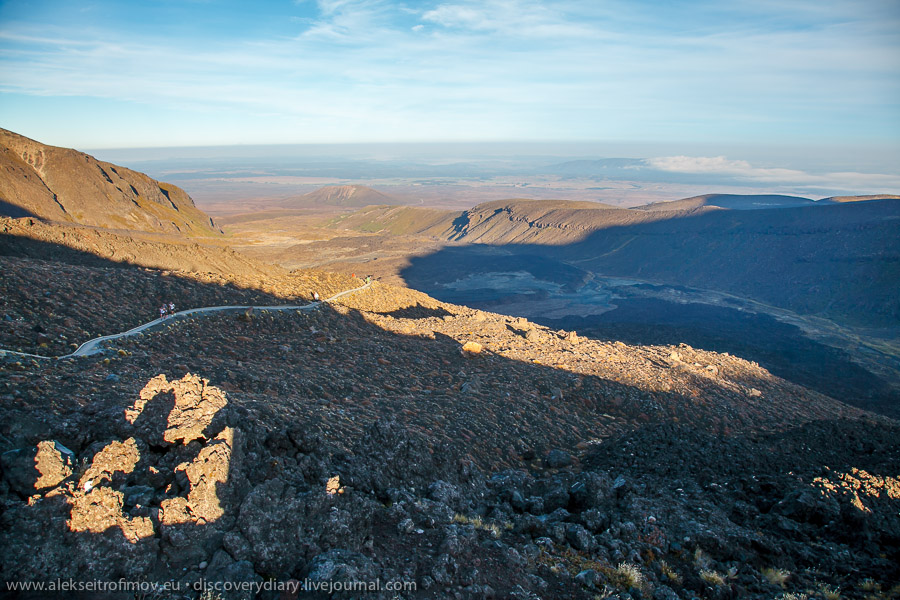 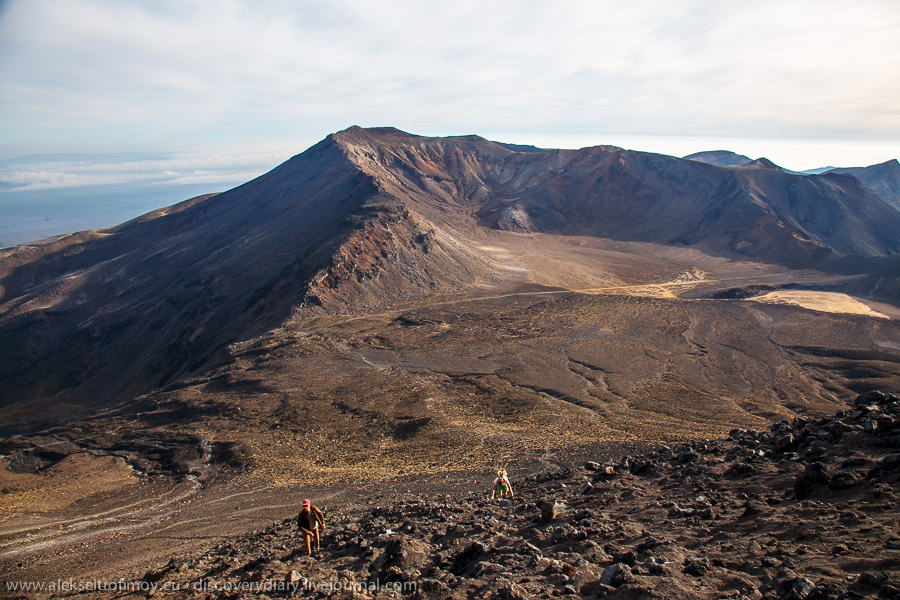 Gradually the ascent becomes steeper and steeper. My German friend Timon asks me: “Do you have the ring with you?” “Well, THAT I cannot tell you!” I answer him laughing. 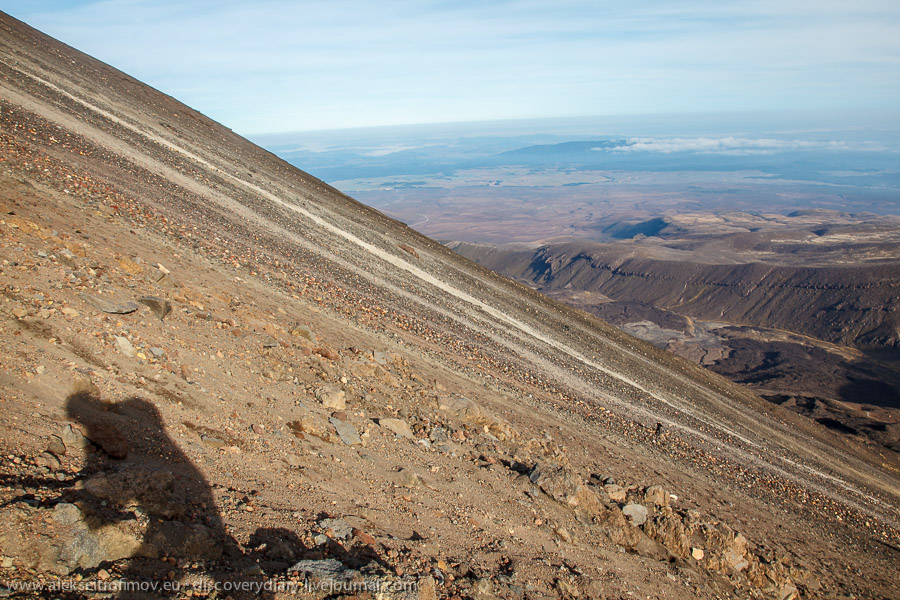 A moment of repose on the way up. 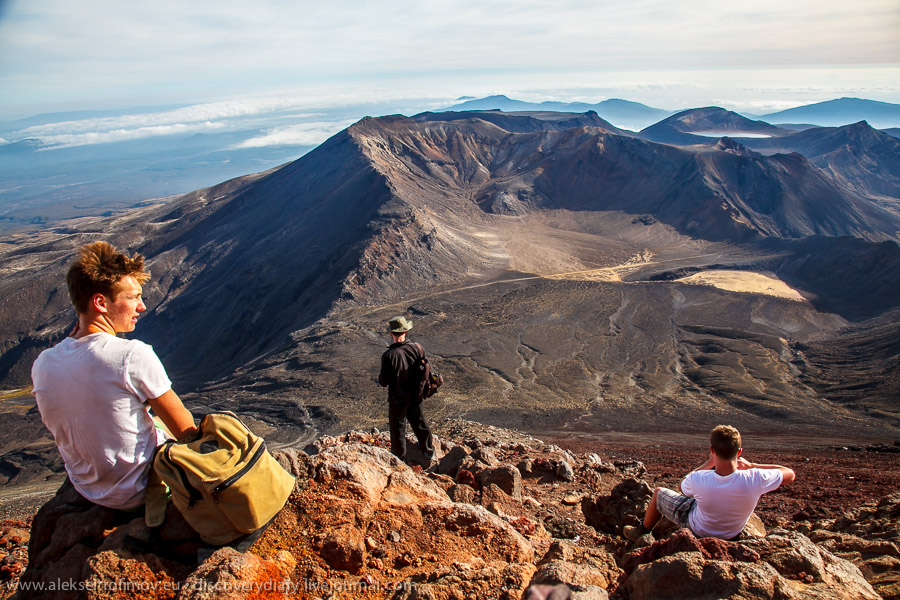 It turns out it is rather tiring to climb Mt Doom. A substantial portion of the way you go on all fours – either because the volcanic sand under your feet is quite unstable or because the ascent is seriously steep. The views though are a worthy reward for the effort. 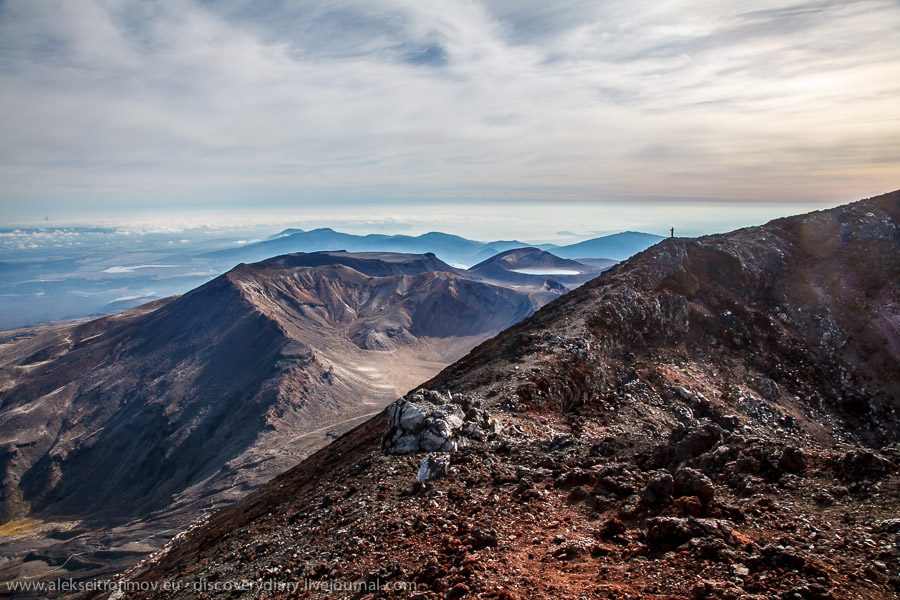 The crater of Mt Doom. 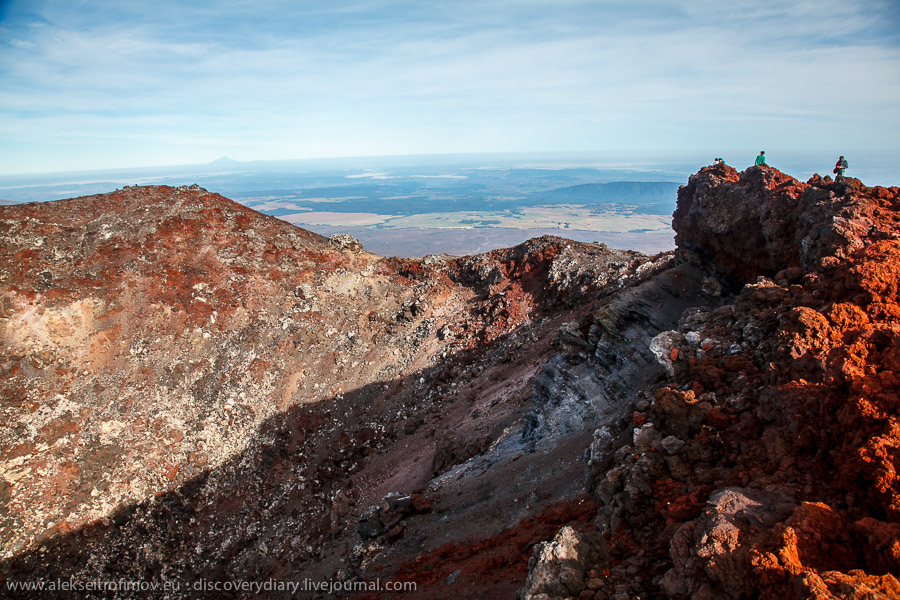 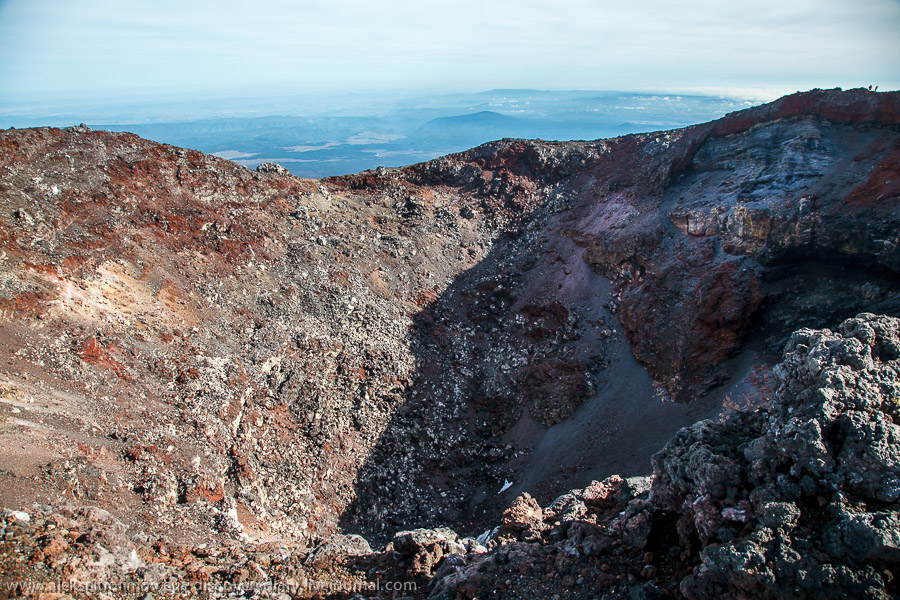 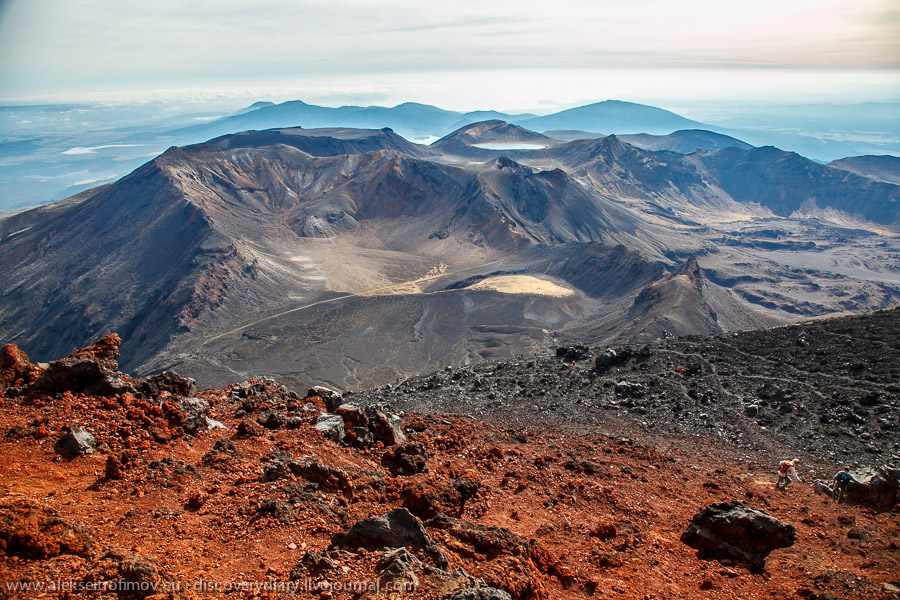 A high ridge of the mountain is situated opposite the crater, and the ridge appears even higher. Of course I had to climb it too: 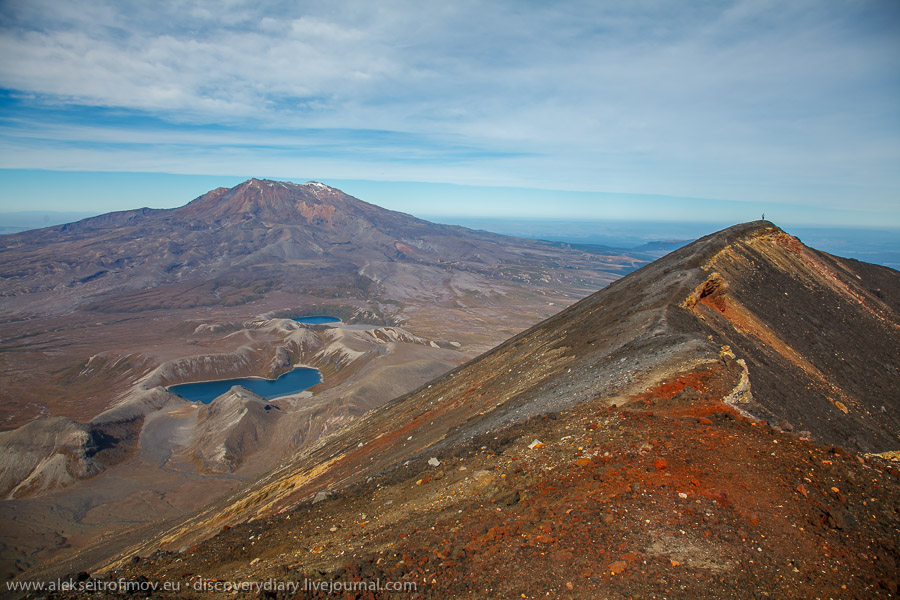 The view to the crater from the ridge: 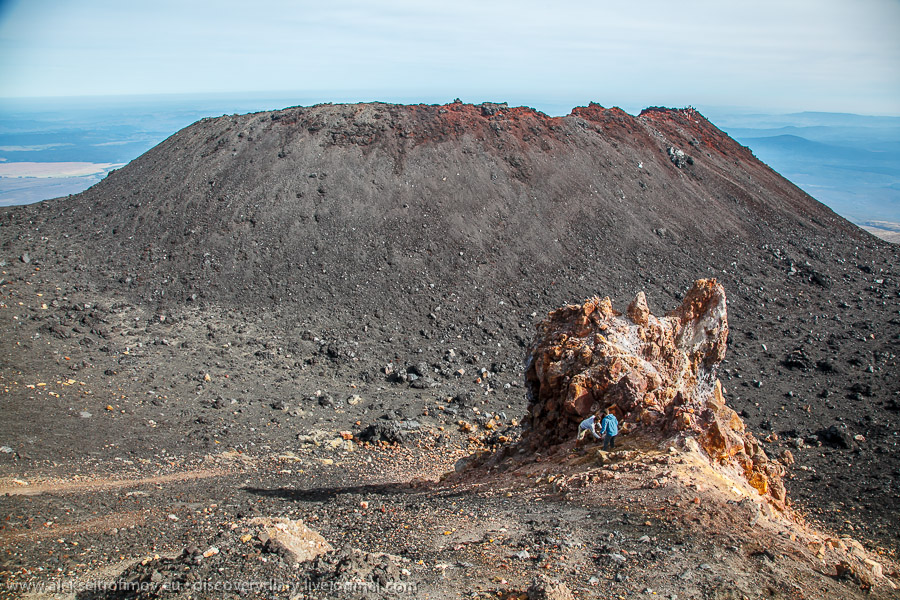 To climb the mountain is half the task, and an easier half I would say. To descend is actually physically more difficult, although it is quicker. The reason is that you exercise the muscles that normally do not get much workout in our everyday life. Most painful of those are the calf muscles – they were giving me grief for a number of days afterwards. Looking back to the conquered mountain: 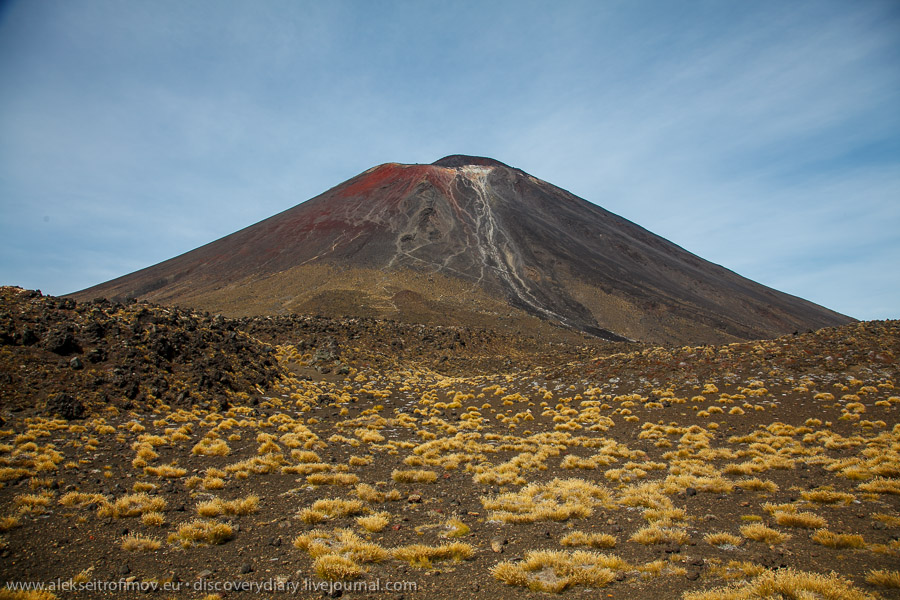 Another look back. Mt Doom and the main Tongariro trek leading away from it: 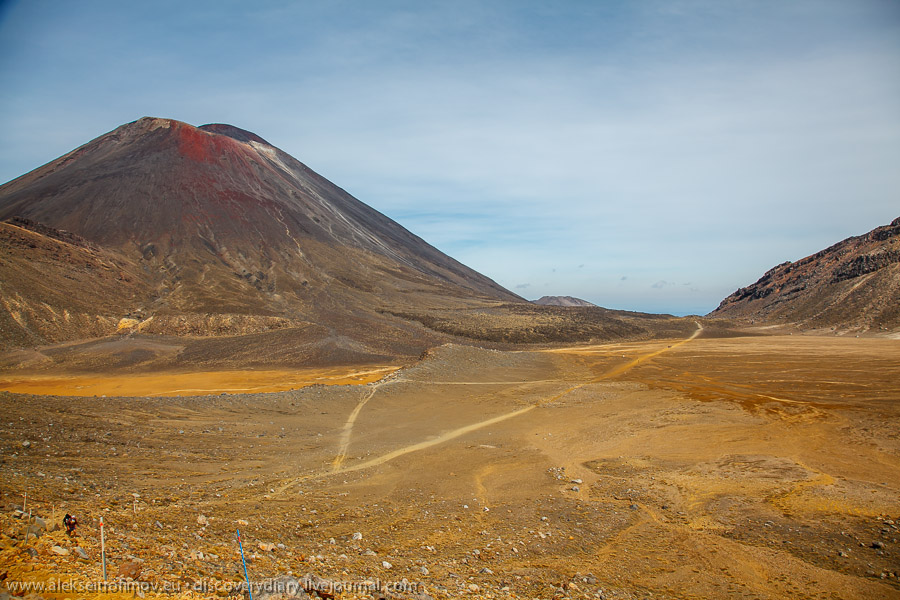 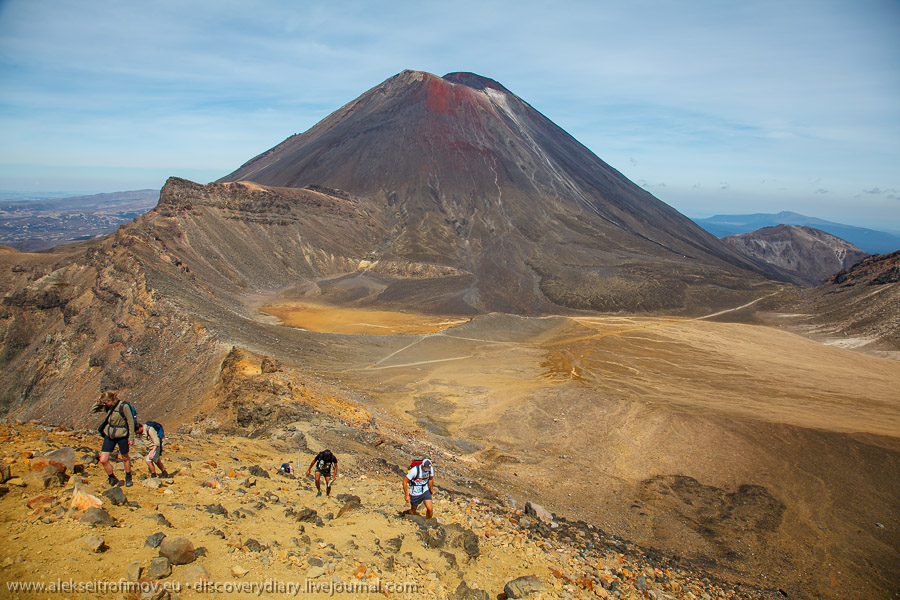 This is the so-called Red Crater. It is the highest point of the main trek. 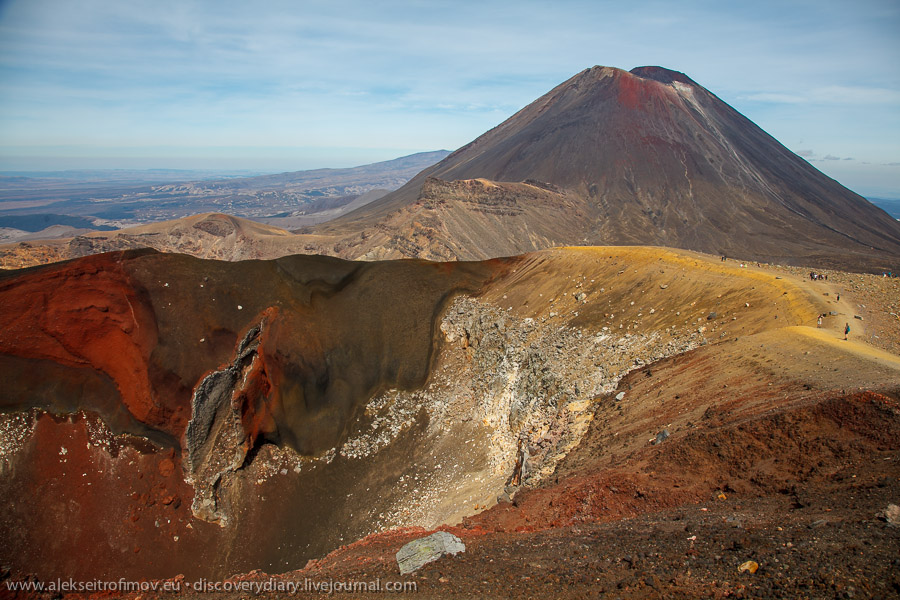 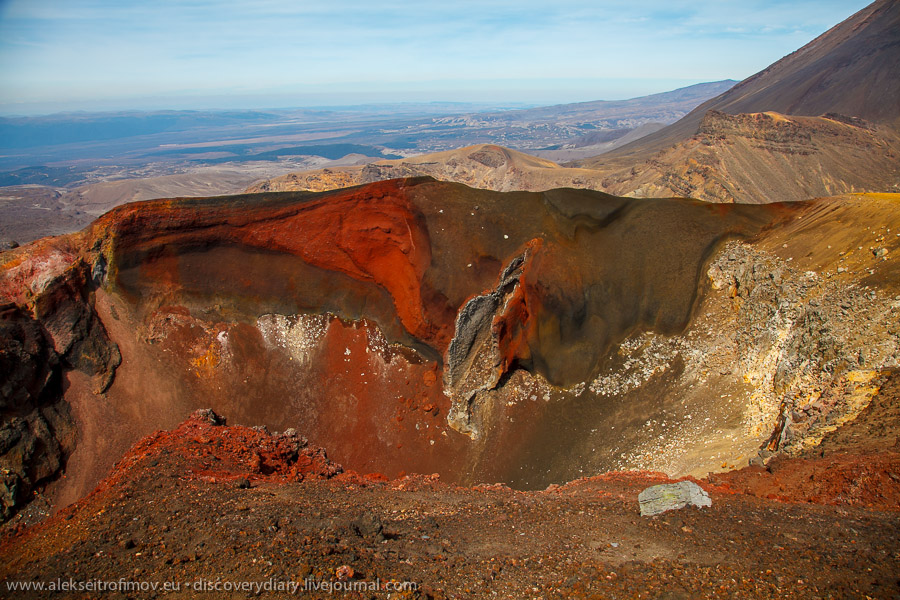 The volcanic lakes as seen from the Red Crater. 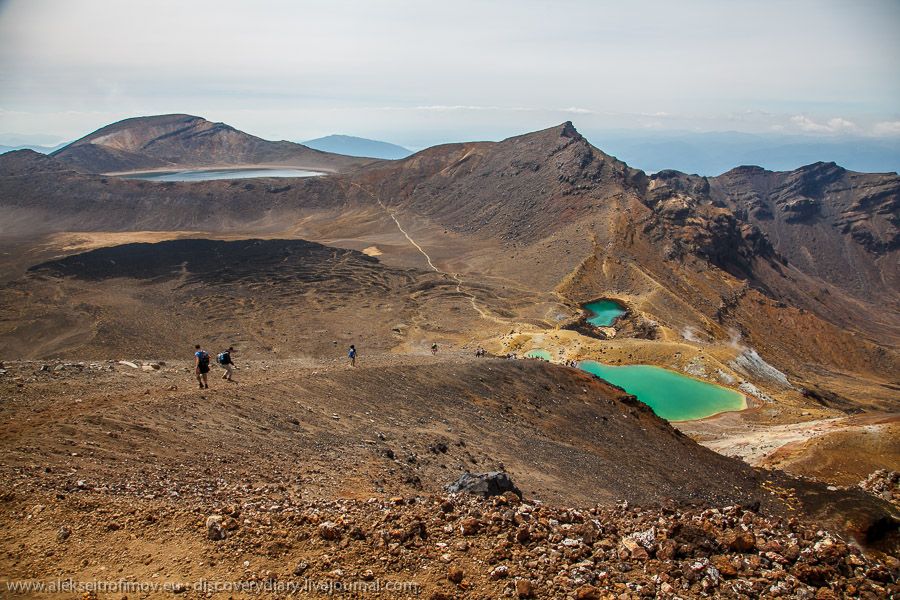 Some people were actually swimming in those lakes. 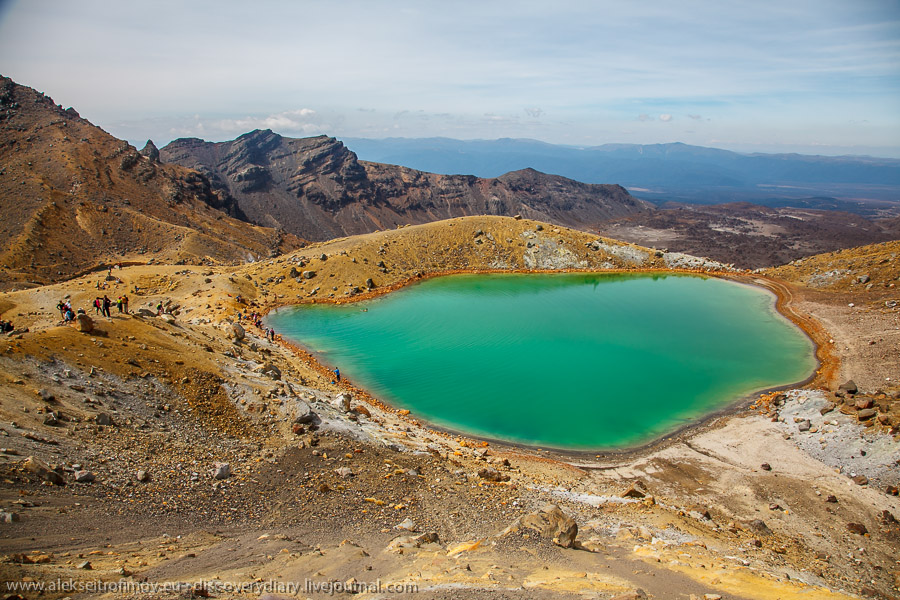 The trek starts its descent. 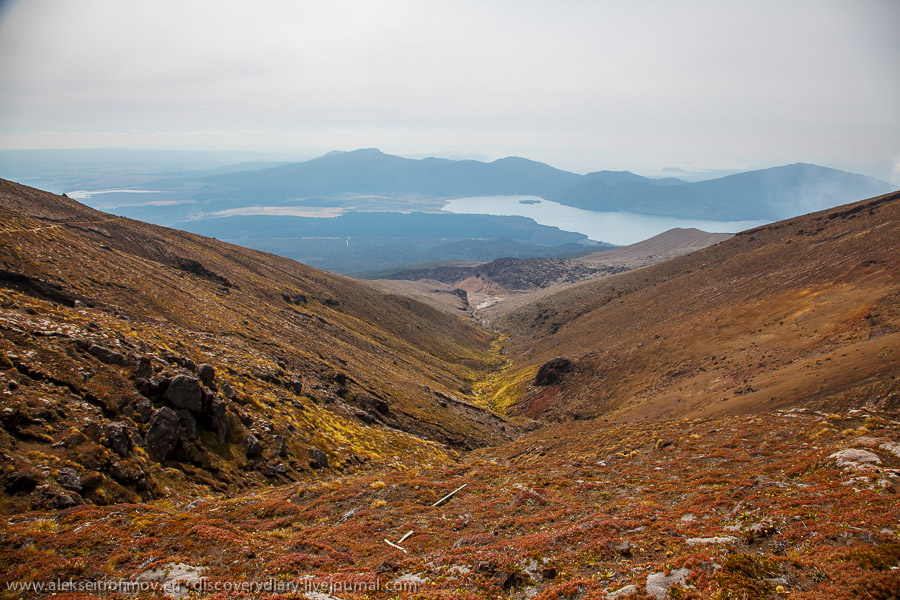 The white clouds on the right are not really clouds. This is volcanic smoke rising from an opening in the side of the mountain. 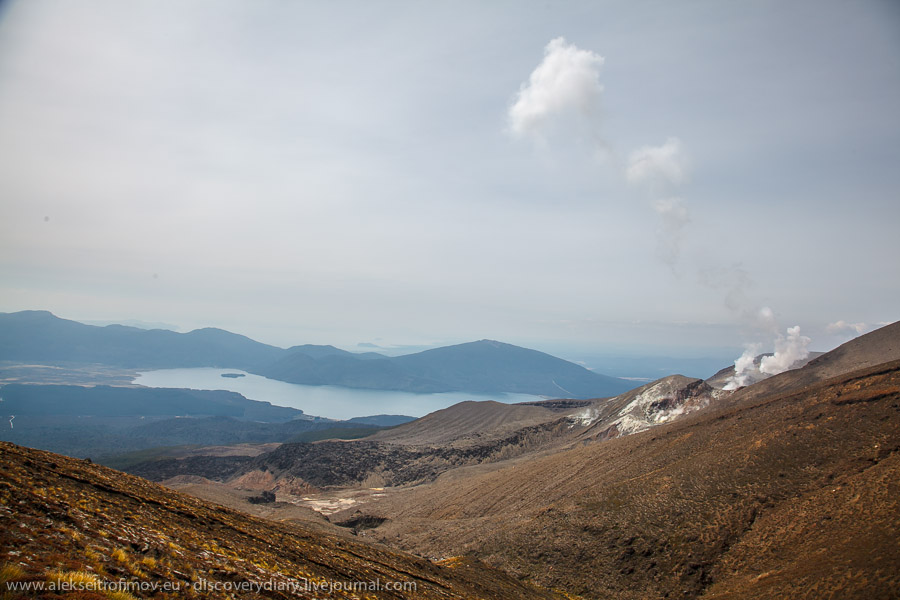 Alpine hut which marks the point where about 2/3 of the way is behind us. Still 8 km to go. 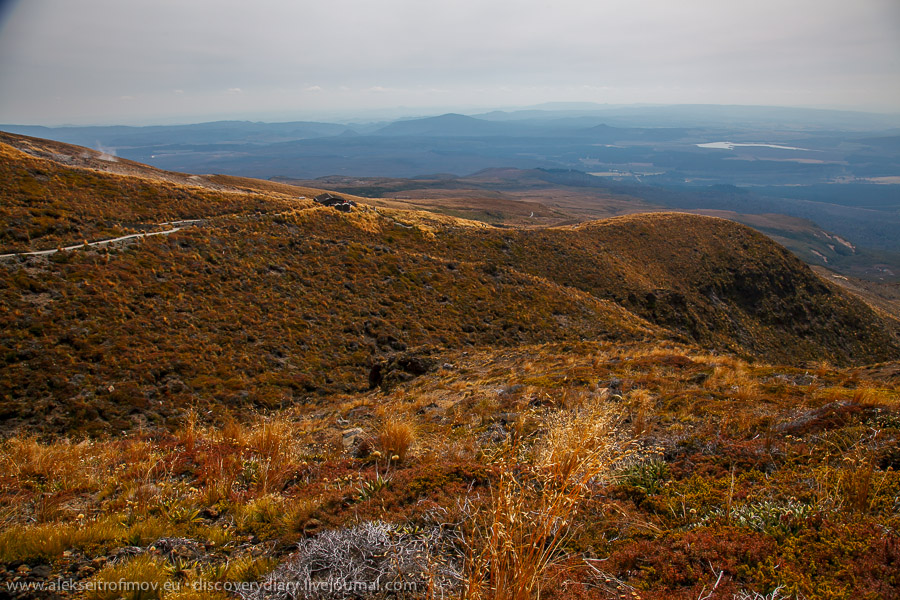 One of the last descents. 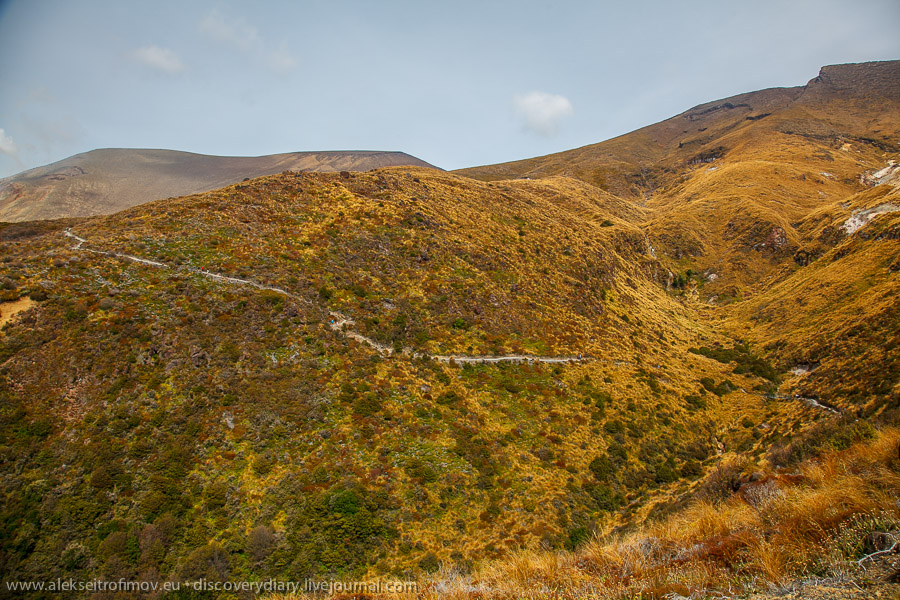 Overall I would say that this crossing is a rather serious undertaking. What makes it tiring in particular is the climb of Mt Doom. Altogether it took me 9 hours of non-stop walking – and I felt seriously exhausted by the end. But the views of the national park that you get to enjoy are quite otherworldly. On every turn a view meets you that would be ranked as unique in any other part of the world. In New Zealand though it all seems par for the course.

One thought on “Tongariro Alpine crossing”