My trip around New Zealand started in Auckland. As much as a third of New Zealand’s population leaves there, earning the Aucklanders a sarcastic denomination of JAFA (just another fucking Aucklander) – though it was an Aucklander who with characteristic self-irony told me about it!

I was lucky to spend my time in Auckland with my friends, a couple from Latvia/Moscow, who live there for seven years already. I have wonderful memories about my stay there.

Auckland is a city built on the volcanic plateau. There are about 50 volcanoes in the area. The evening view over Auckland from Mt Eden, the highest of these volcanoes, standing at 196 metres: 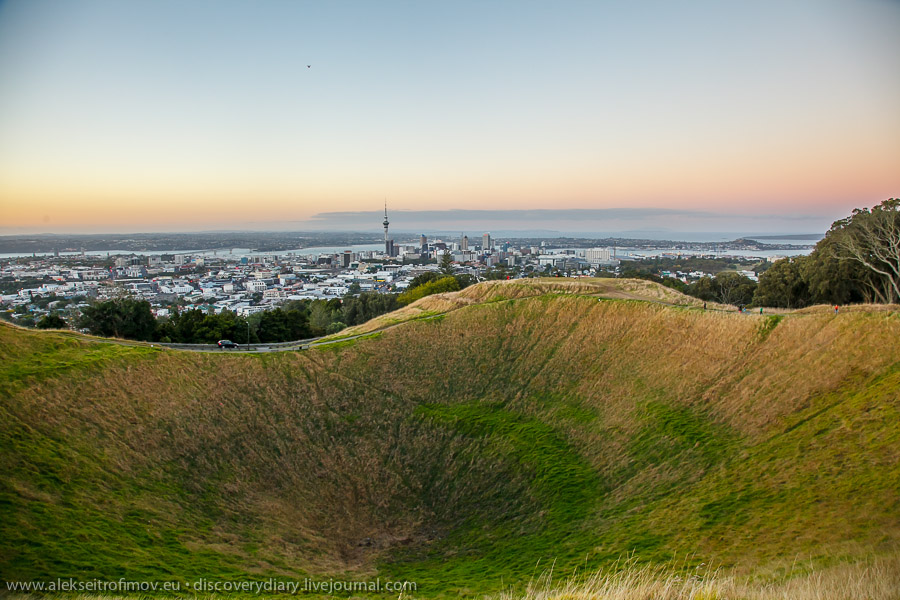 Not all the volcanoes are decisively inactive. The most recent eruption was that of Rangitoto about 600 years ago. Here it is, a volcanic island straight ahead: 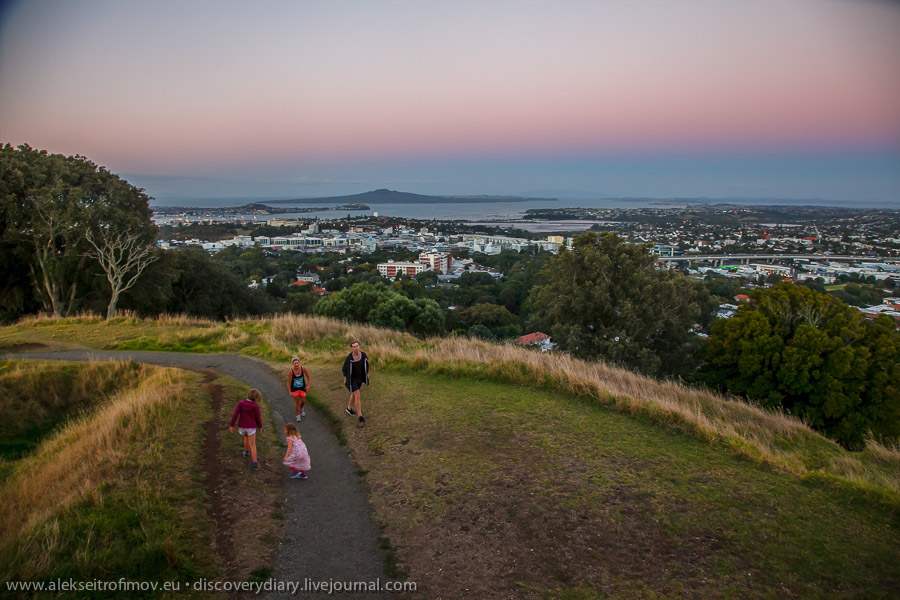 Auckland by night from the same viewpoint. Skytower is in the centre. It is a radio tower in CBD, the tallest building in the Southern hemisphere. My hotel was two steps from it. 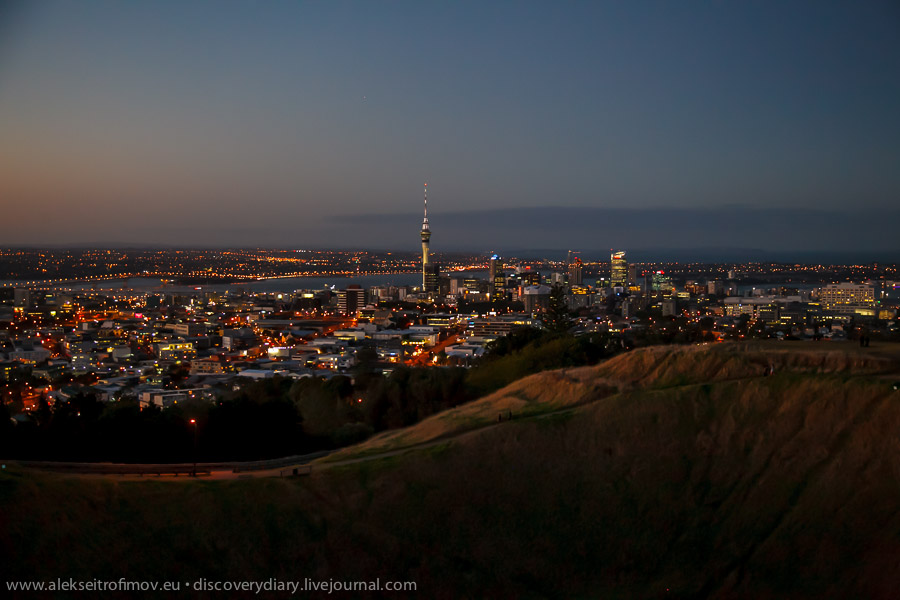 Skytower offers all kinds of extreme experiences. For one, you can do a so-called SkyJump there – jump down while attached on a special metallic cable. It’s not strictly speaking a bungy jump – as there is a special additional security to prevent bumping into the tower – but similar to it. Another extreme option is the Skywalk – a open-air walk on top of the tower, in the wind, attached to it with a cable. I considered these but decided to go for the Nevis jump in Queenstown instead. I did visit the observation decks of Skytower though. There are two decks, although the lower one (186m) offers better photo options. Auckland’s CBD and Rangitoto: 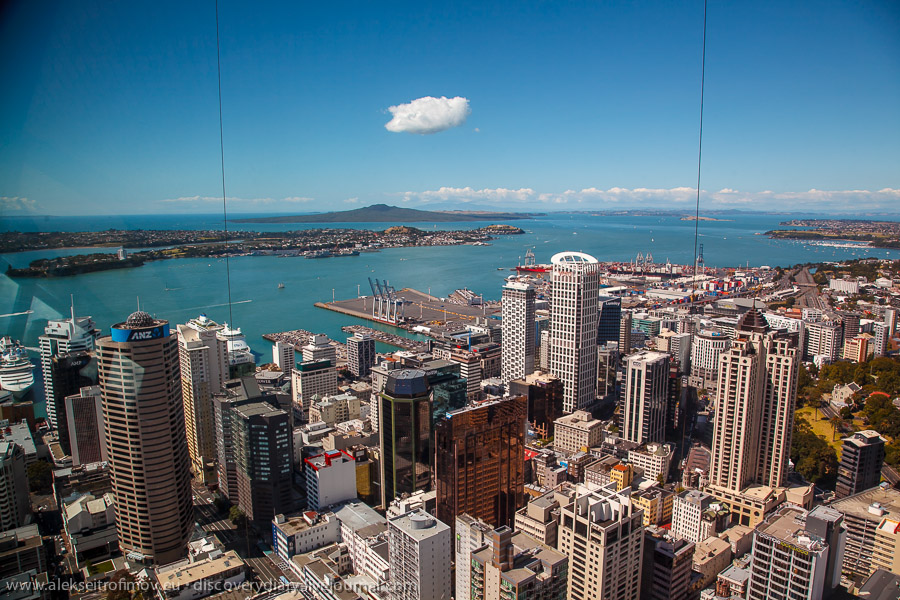 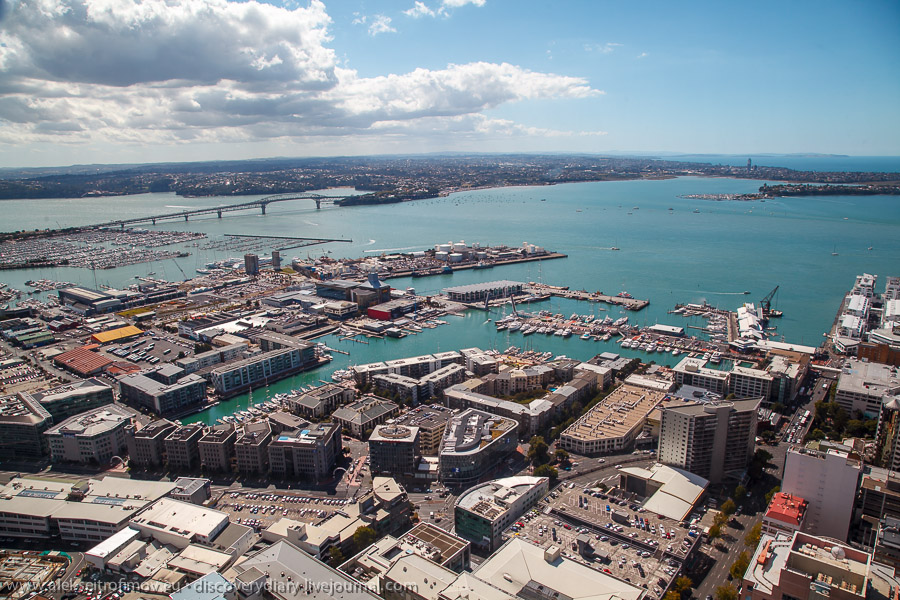 From time to time the Skyjumpers fly by and of course all the visitors hold their breath. I photographed one: 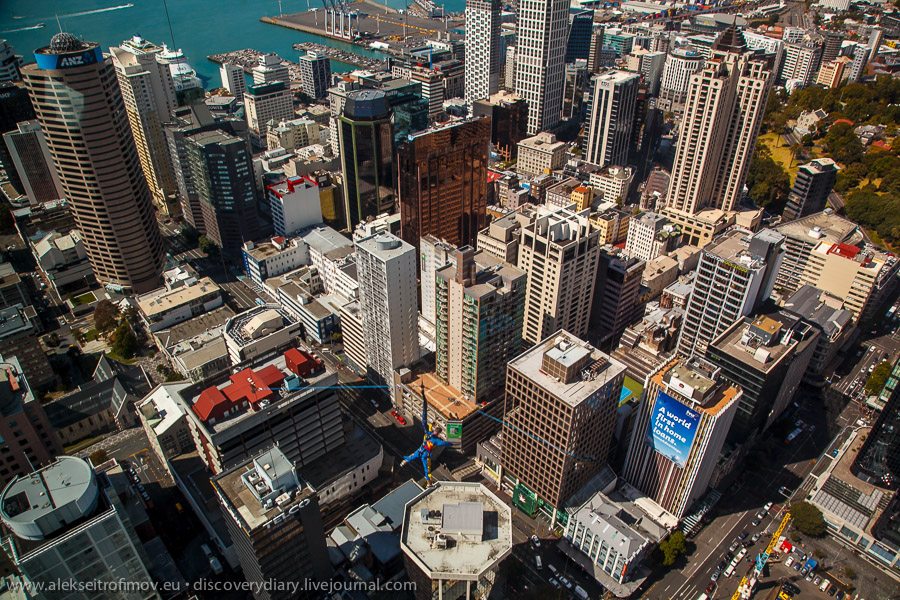 The glass floor is 38mm thick and is as strong as concrete. Let’s check! 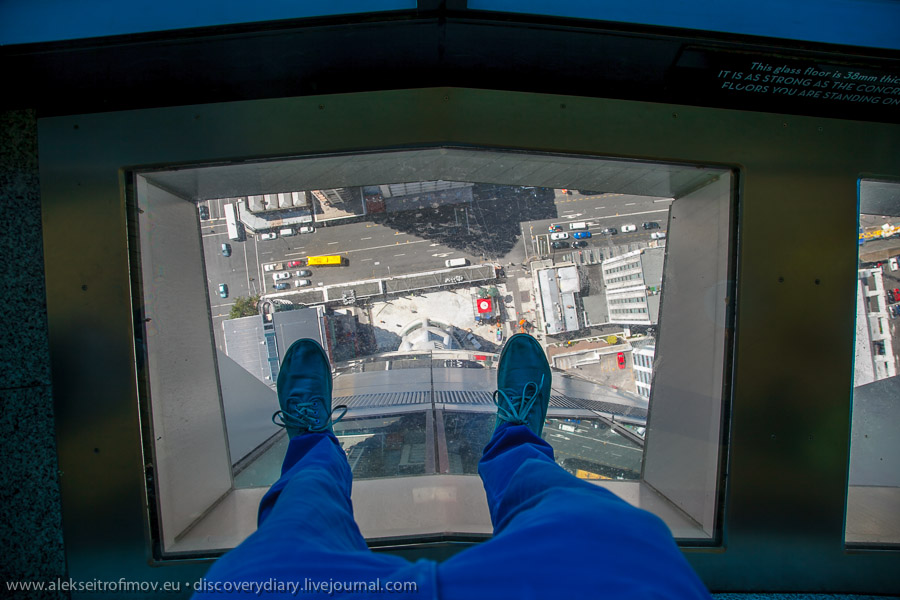 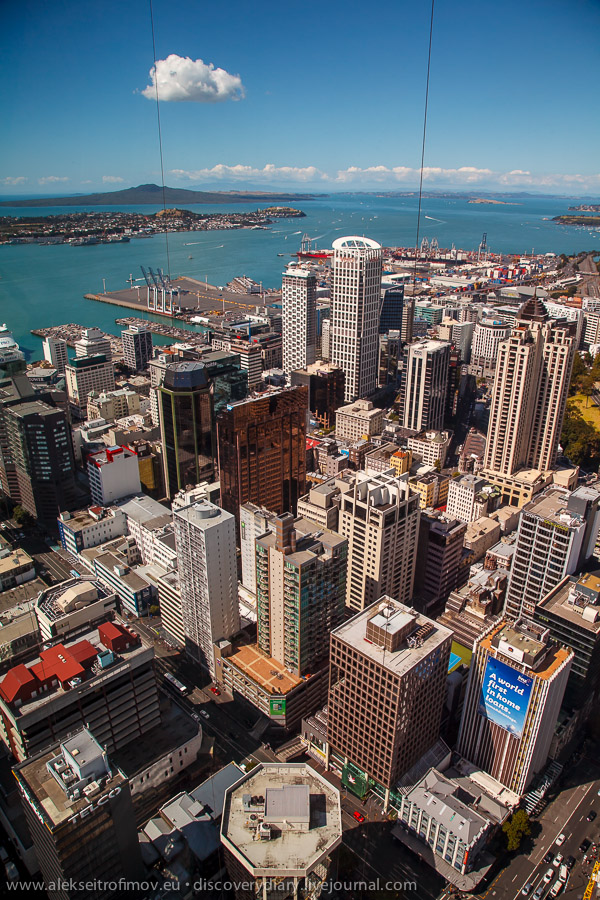 One evening I departed from one of the passenger quays for the island of Rangitoto, right in front of Auckland: 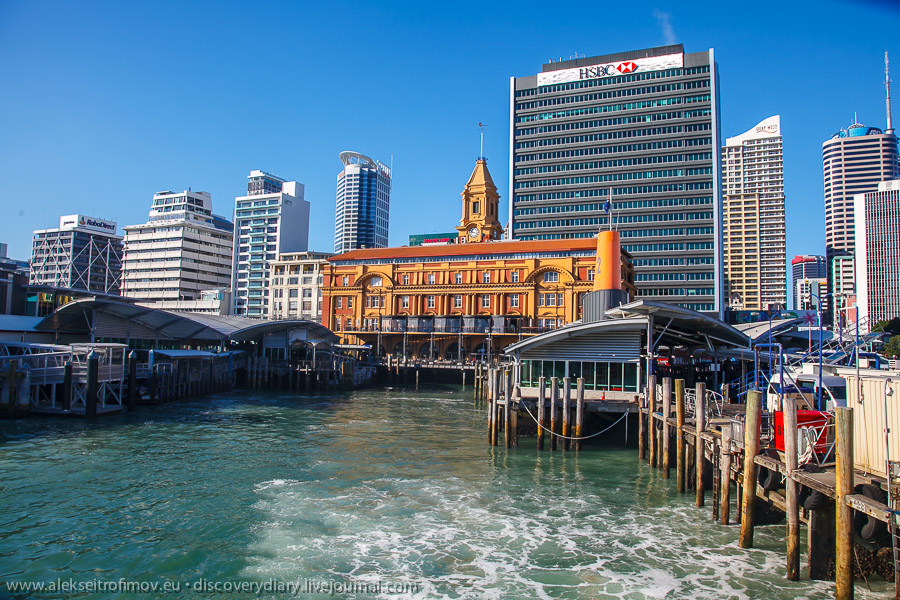 The trace of the boat leads to the quay: 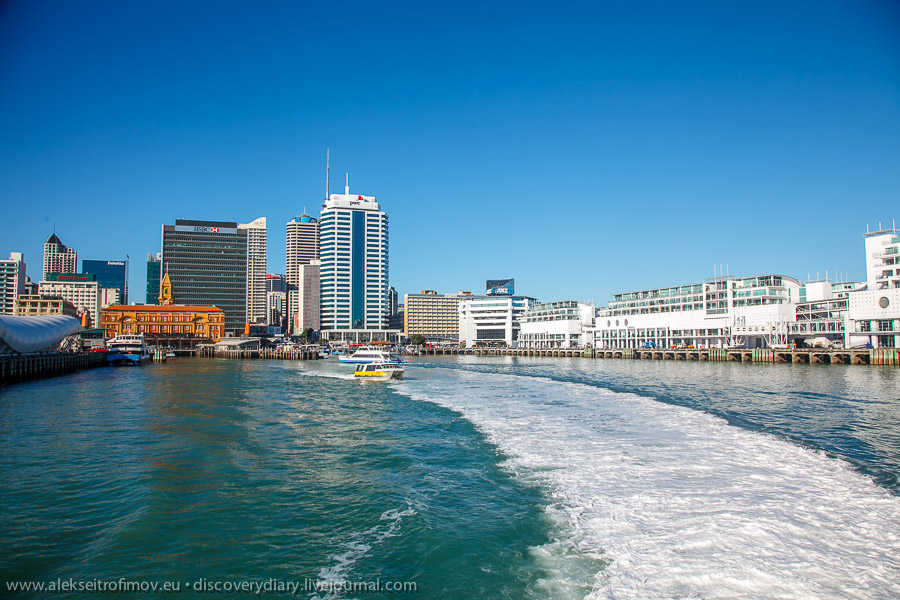 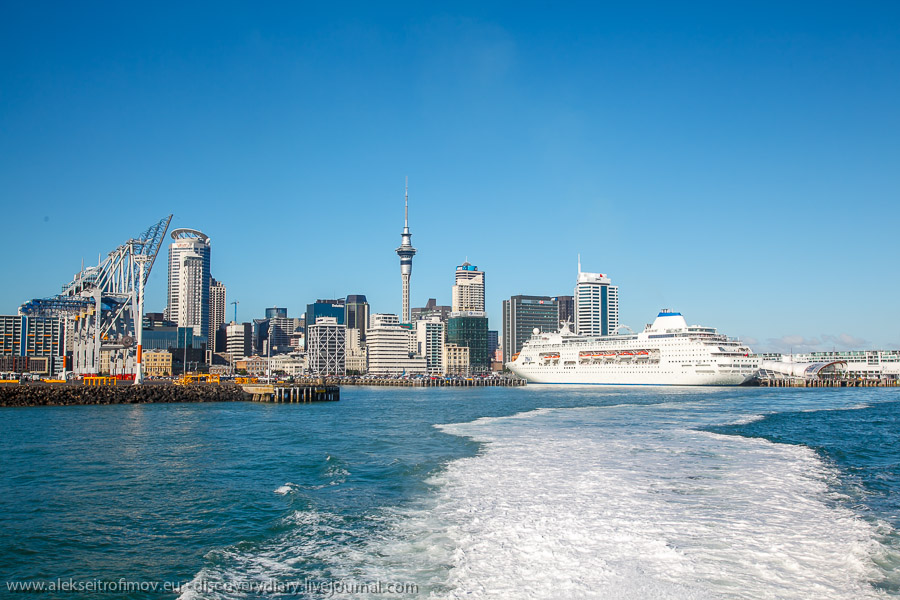 The island of Rangitoto formed only 600 years ago during an eruption of the volcano. The maori observed the eruption and their legends describe it. 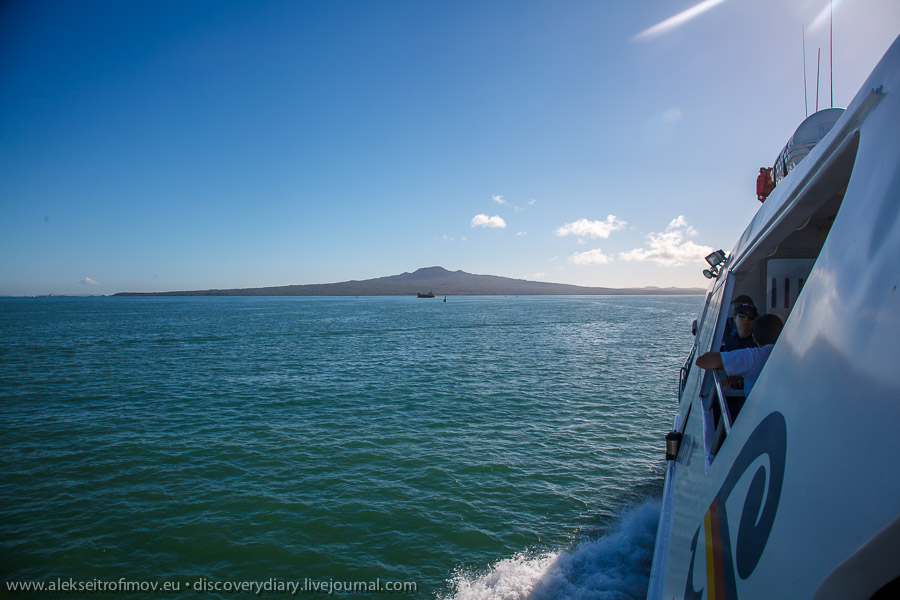 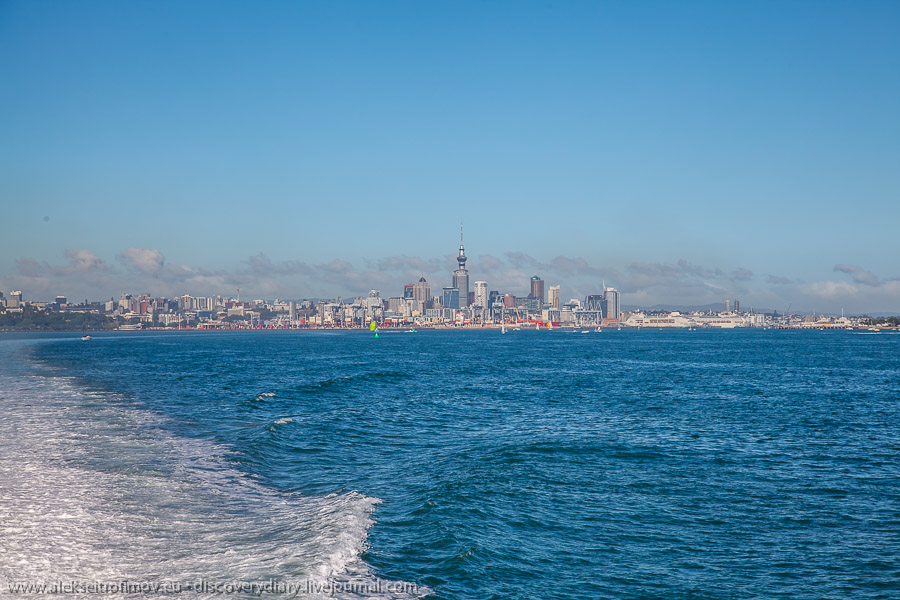 The quay on Rangitoto: 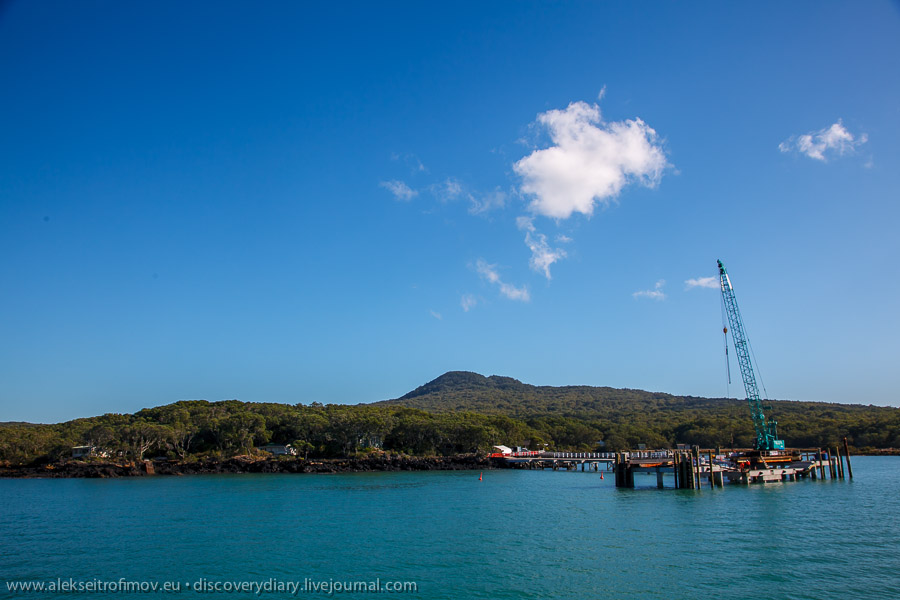 The lava fields. You can climb the volcano on foot. The climb takes about 3 hours return and the timetable of boats from Auckland neatly takes this into account. 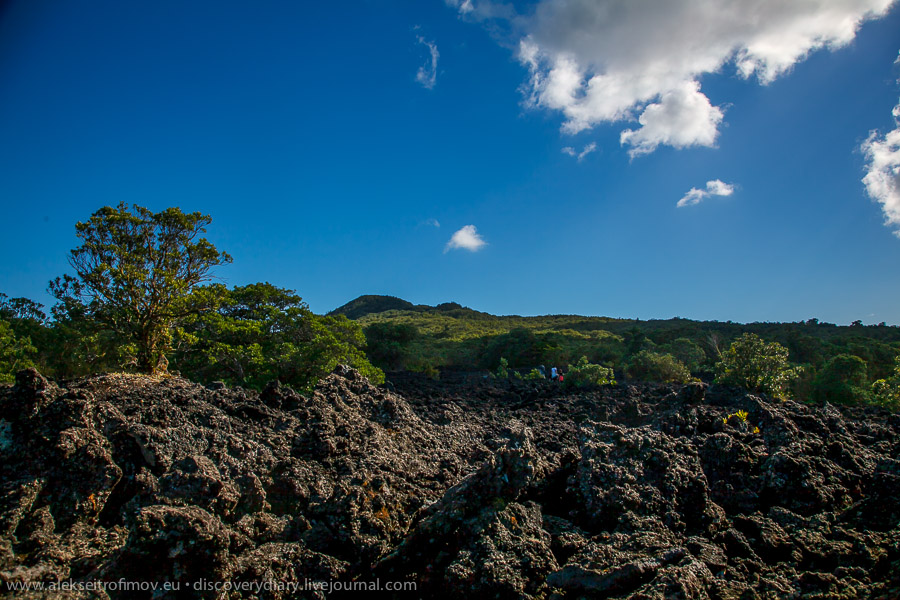 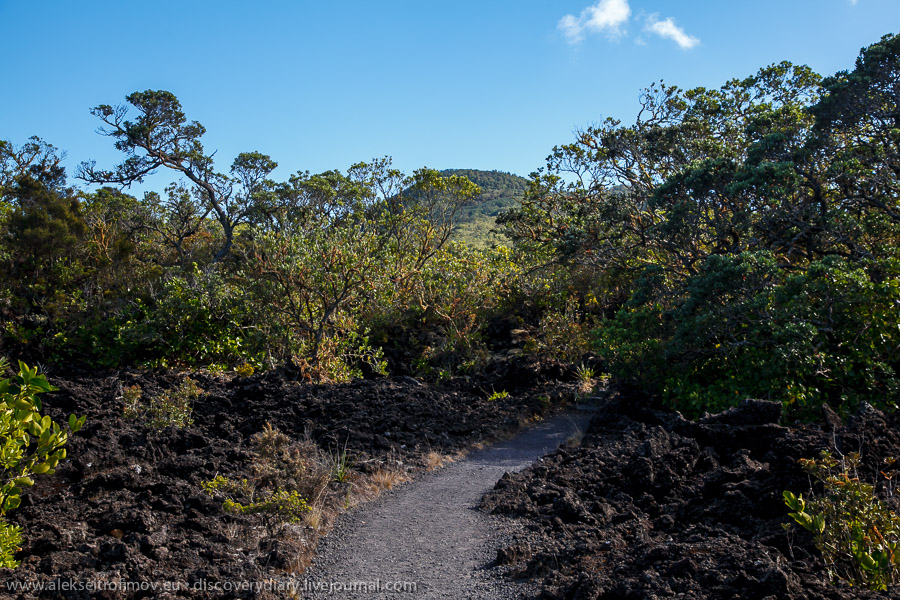 and the wood growing on the island. 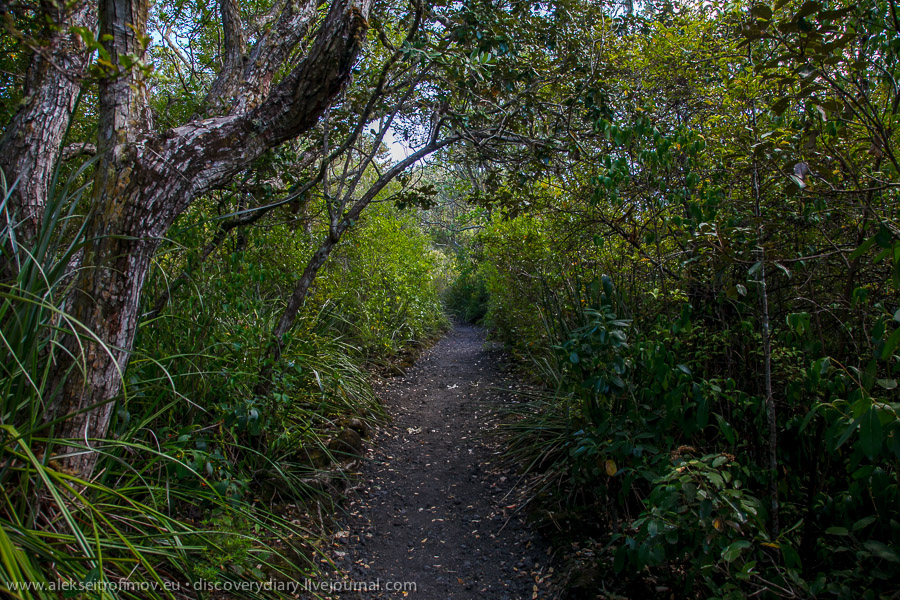 Between the trees you start to glimpse Auckland: 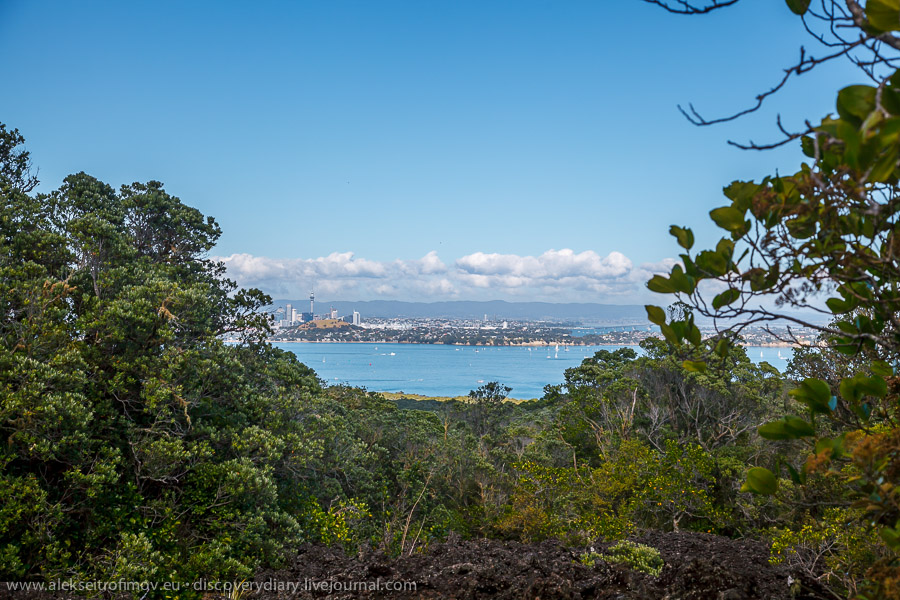 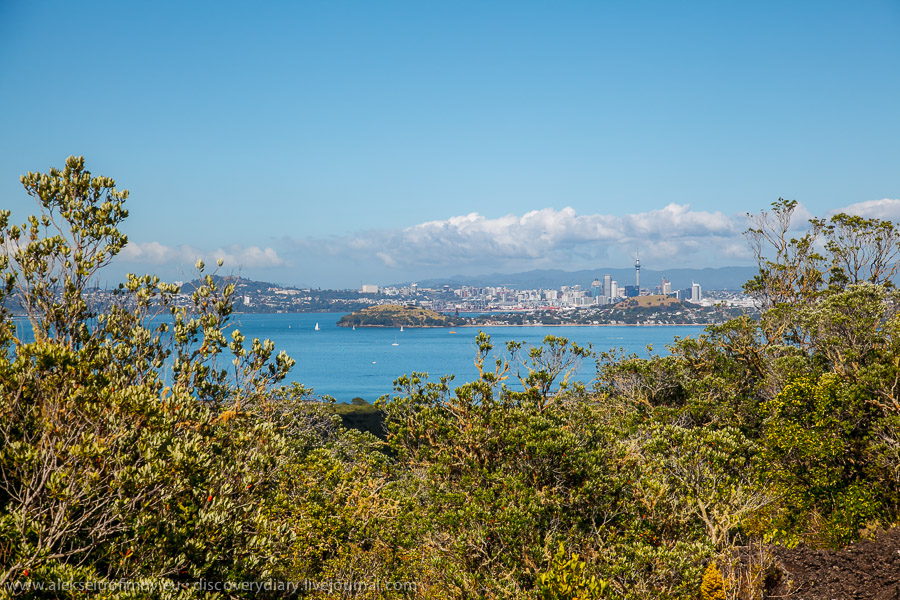 The crater itself, all covered in trees: 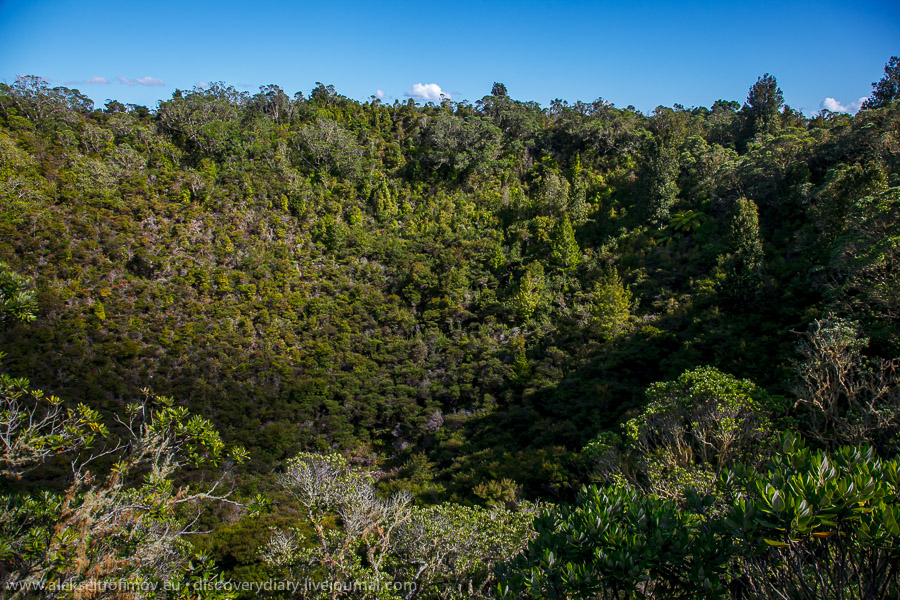 The views are quite breathtaking. 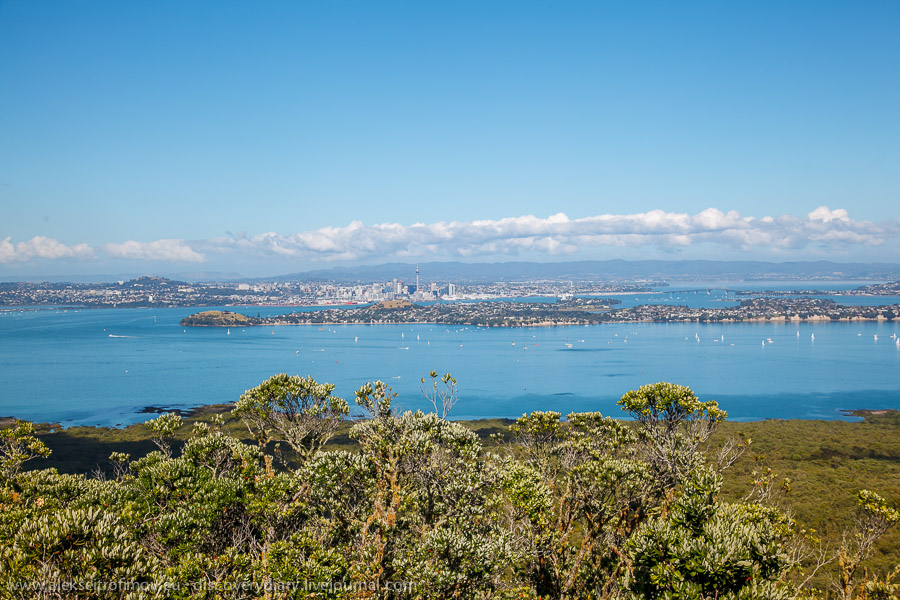 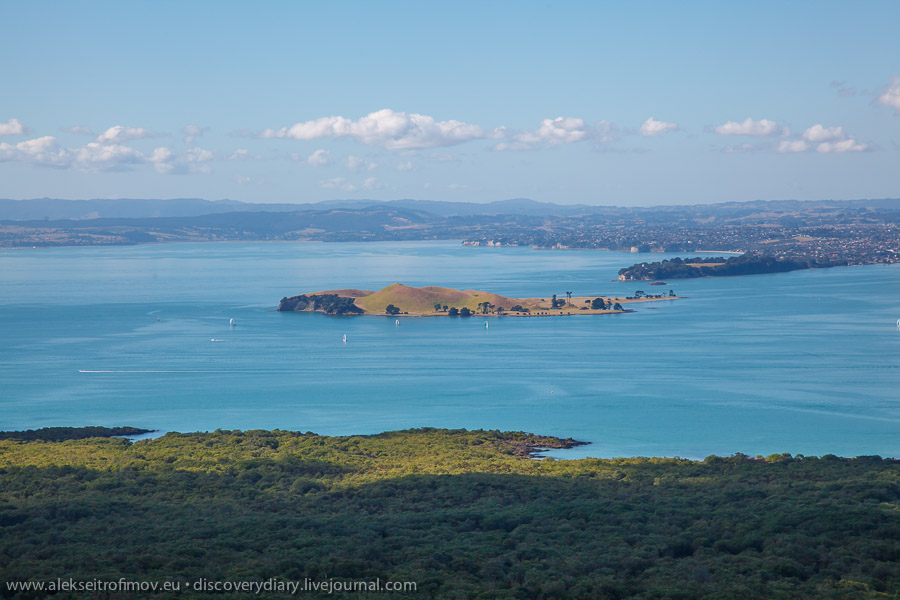 Next to the quay there are a few summer houses built in 1930s. As of now all building is prohibited on the island as it is a natural reserve. The summer houses built in the old days were mostly razed in 1970s, however the few that remain have been recently classified as cultural heritage and will be preserved. 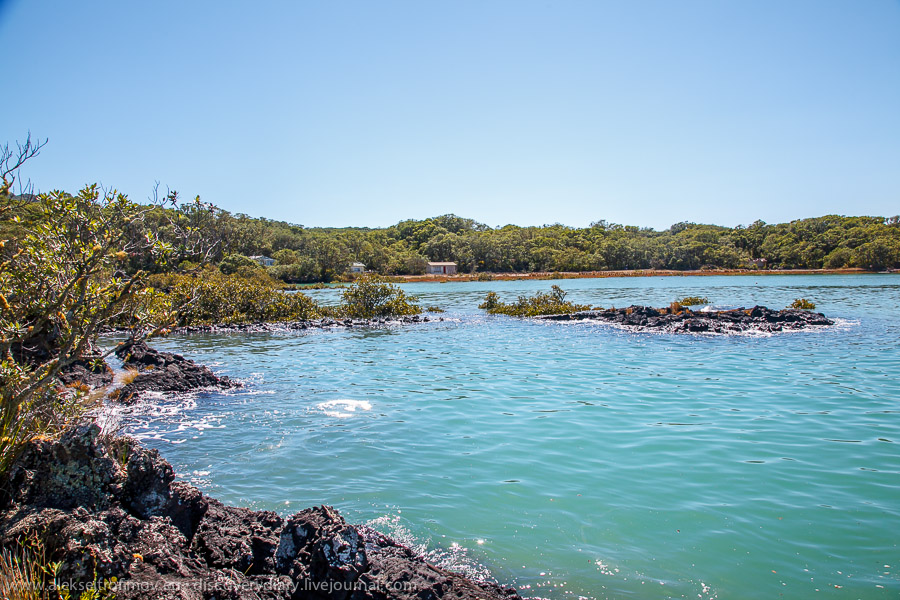 Going back to Auckland: 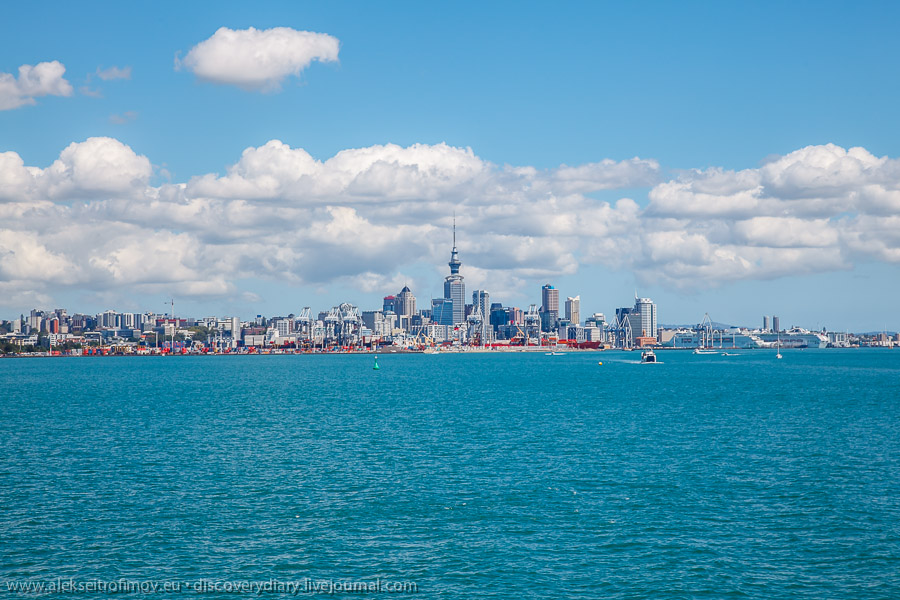 The Wynyard quarter in Auckland. It is right by the water and possesses this special relaxed sea spirit. I walekd around it on a summer day and contemplated the Aucklanders eating their fish and chips and sipping white wine in the sun. 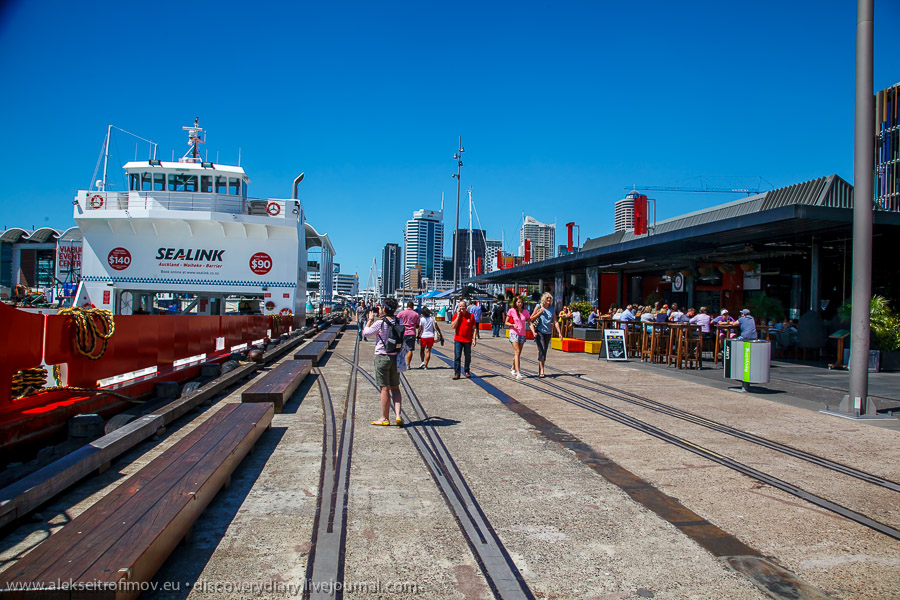 We further visited the beach of Piha which is located about 30km West of Auckland on the Western shore of the North Island. The beach is amazingly picturesque but also happens to be the most dangerous beach in New Zealand. It is determined by the number of rescues performed by the lifeguards there. Piha has extremely strong and dangerous rip currents (rip tides). 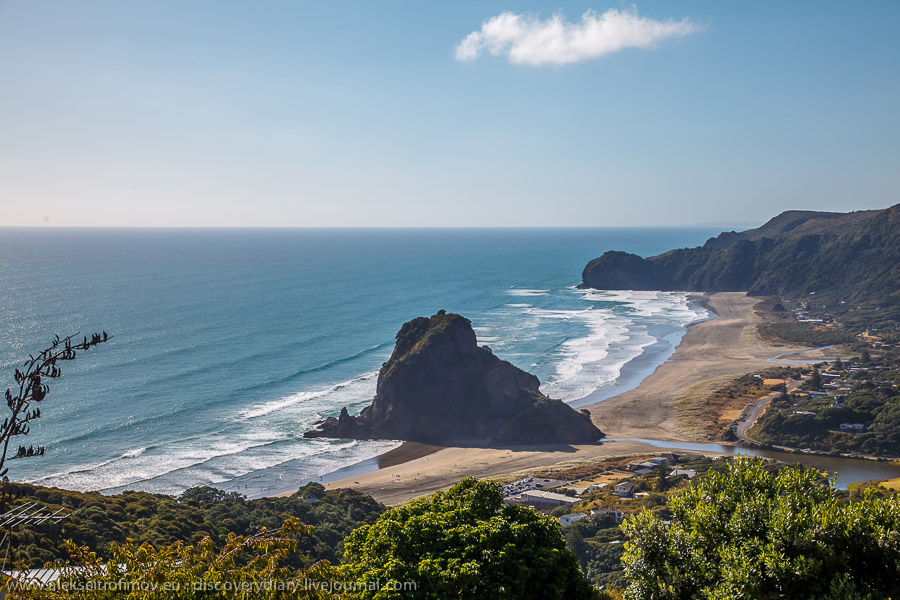 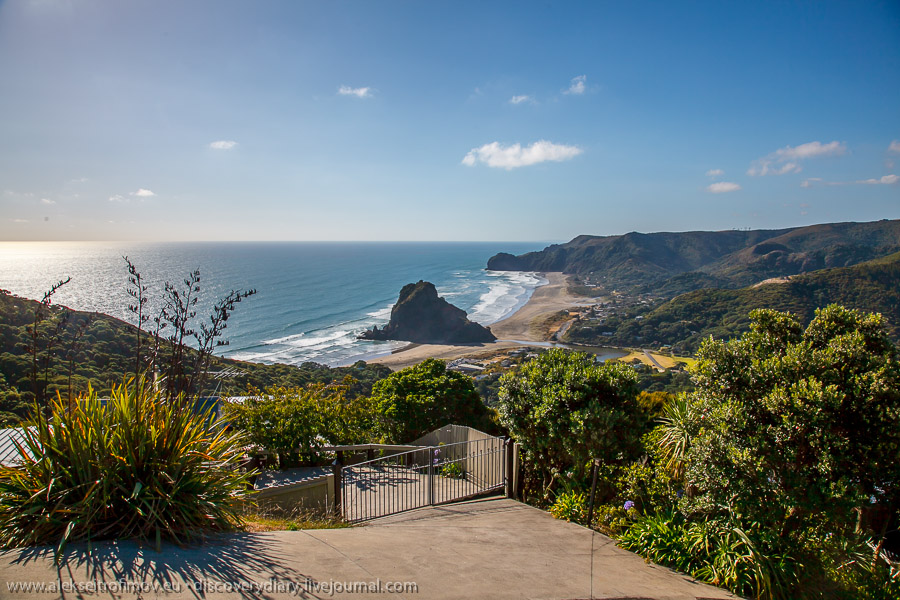 About two weeks later I spoke with a lifeguard on the South Island who used to work on Piha, she was telling me all kinds of blood curling stories about it. Although most tragedies occur precisely when people go swimming when there are no lifeguards on duty. People die because they try to fight the rip current and end up exhausting themselves, in fact the best strategy is to let the current hold you until it loses strength – usually this happens quite quickly – and then swim to the shore around it. With appropriate caution we entered the cold water. It was my first time swimming in a wetsuit, I was amazed at how effective it is. 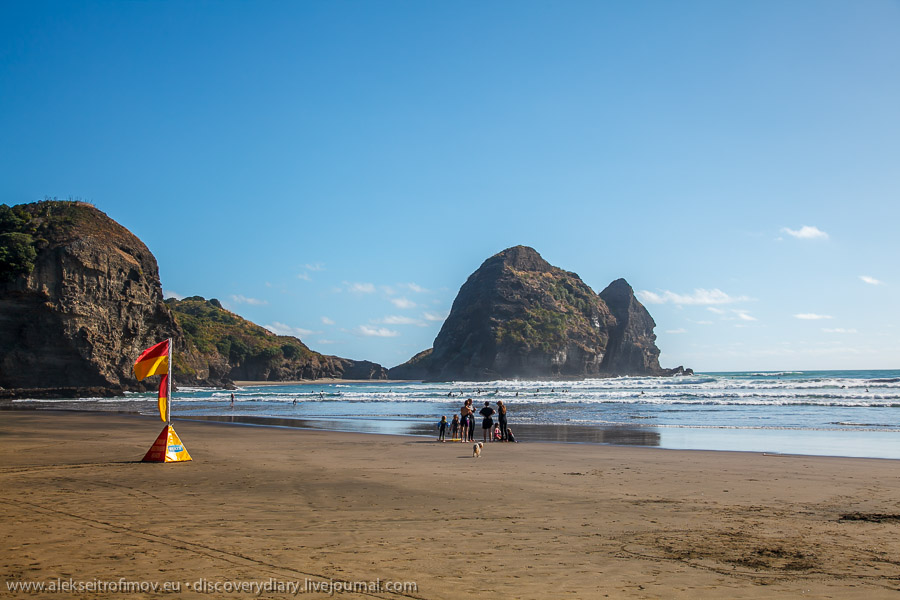 The Lion rock – looks like a lying lion obviously. 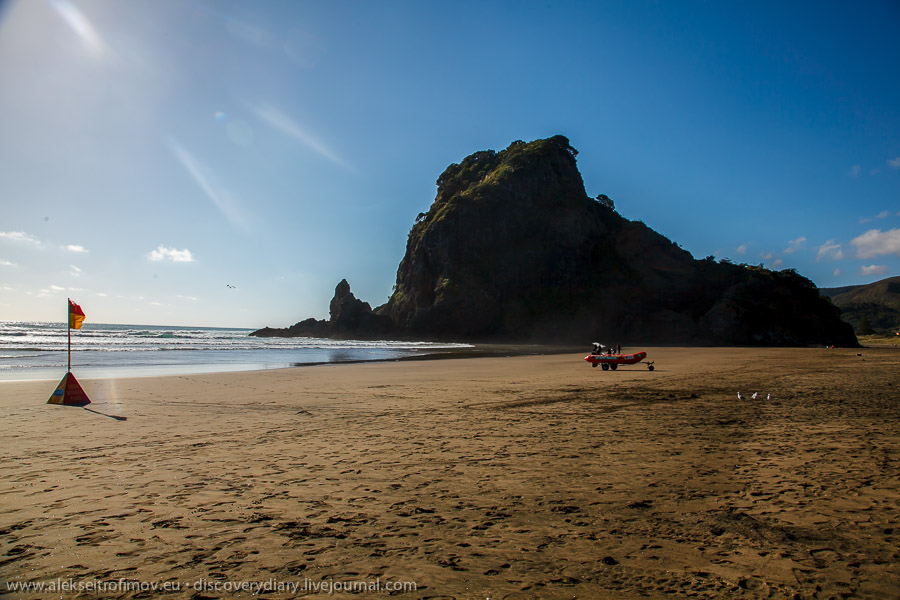 My hospitable friends. Philip is playing nearby. 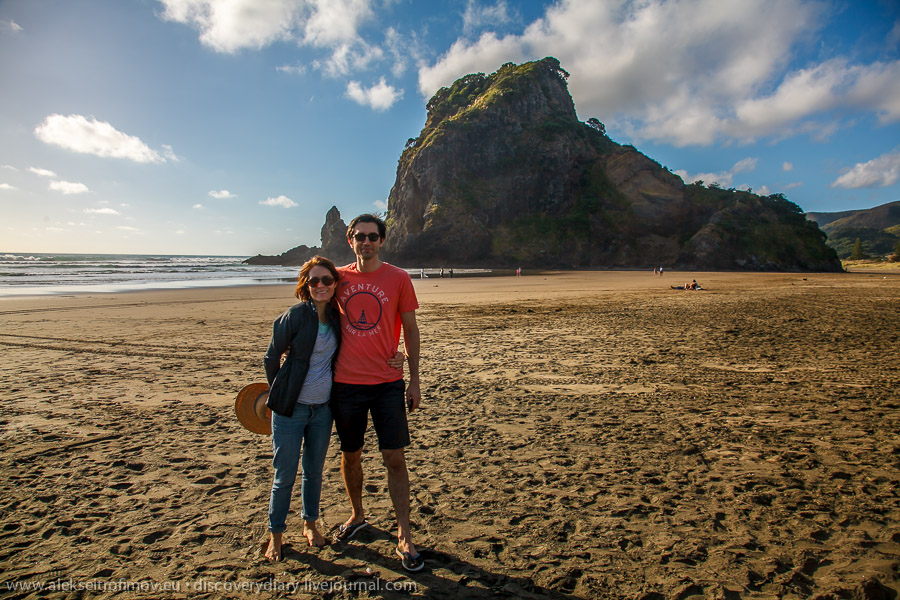 One thought on “Sunny Auckland”