Sacsaywaman, Satisfied Falcon, in the times of the Incas was the most important temple which crowned their sacred universe.

We see today only a small part of the complex, maybe 20%, as all of the smaller stones were plundered to build other buildings in Cusco. Only the three massive walls remain. These were not taken part simply because the Spaniards had no idea how to transport the gigantic stones of which they are made. In Inca times the complex rose many more levels up and featured several giant rounded towers. 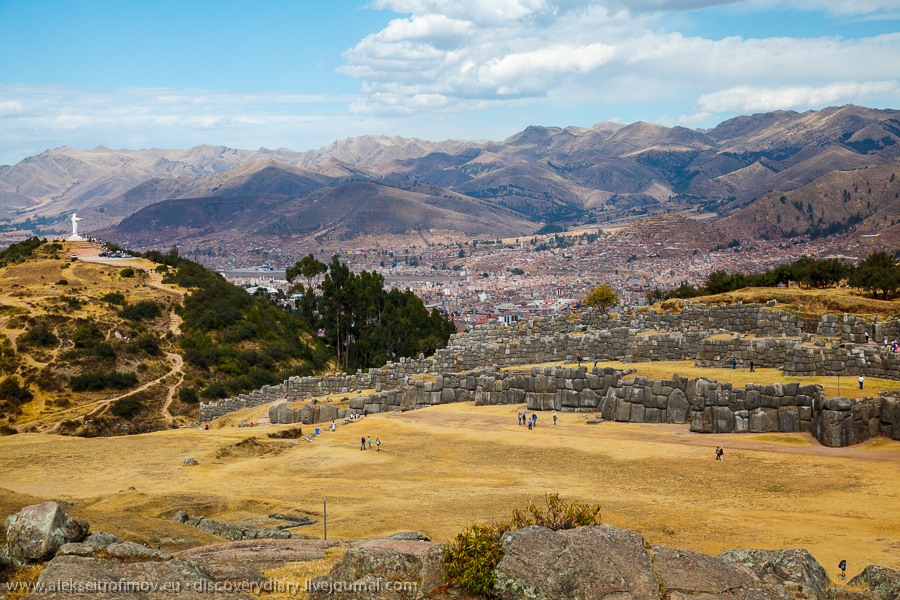 Even though Sacsaywaman’s primary function was religious, the walls in the form of teeth also were useful as defensive ramparts. Any attacking army would have to expose its flanks to the defenders mounted upstairs. 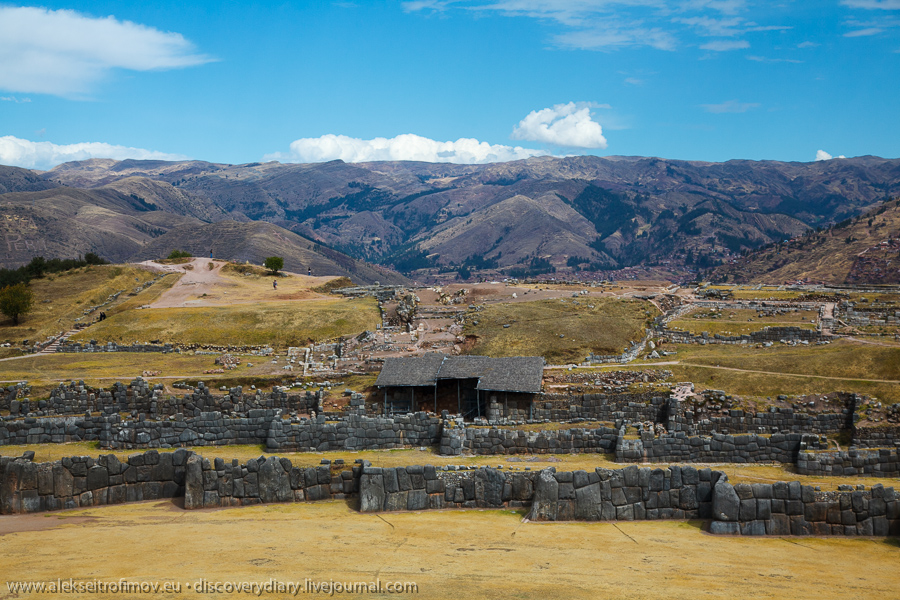 Somehow the Incas transported these huge blocks weighting up to 300 tonnes to the level of 3701 metres. 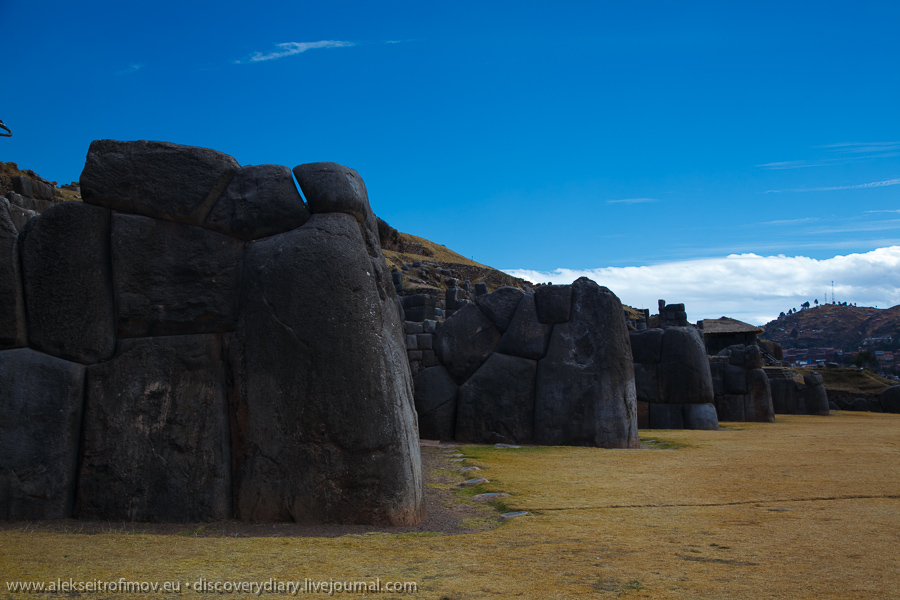 Today the complex provides rich inspiration for fans of alien visitations. Along with the pyramids, it is the number one proof of aliens’ participation in the life of the ancient civilisations. Indeed the working of the stone blocks of Sacsaywaman is amazingly precise. You cannot put a sheet of paper or a credit card between them (I checked). Yet they are simply put one next to the other, without using any mortar to hold them together. 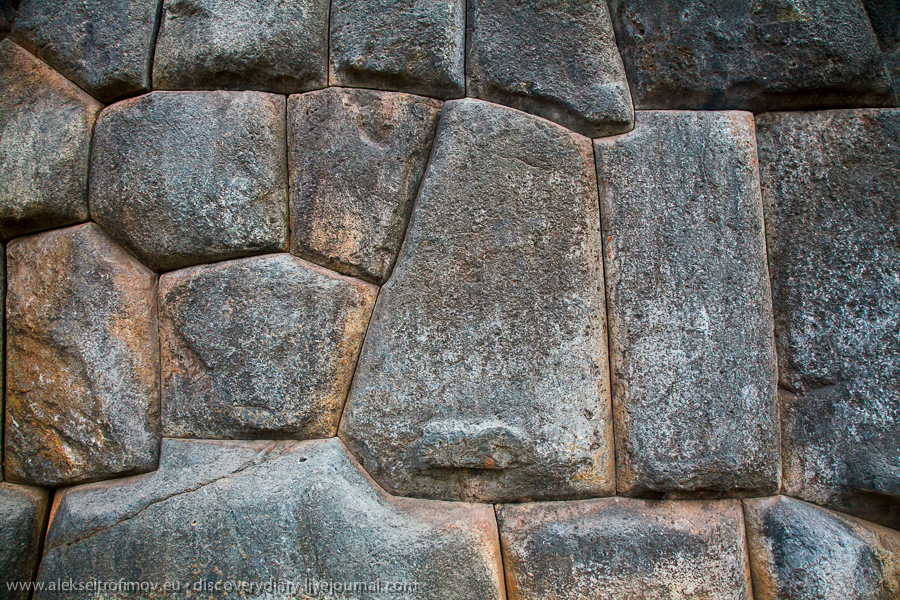 On shamanist blogs Sacsaywaman is seen as an entrance to another world. Indeed there are three particularly big stones inserted into the walls which look like huge doors. Shamanists believe that a particular door leads to the upper world (the world of the Condor in the Inca worldview), to the middle world of the Puma and to the nether world, that of the Serpent. The image below shows one of the three doors, surrounded by smaller stones, on the right.

On the left you can also see the shape of the Puma – it is in the upper row, with four smaller stones above a larger one. 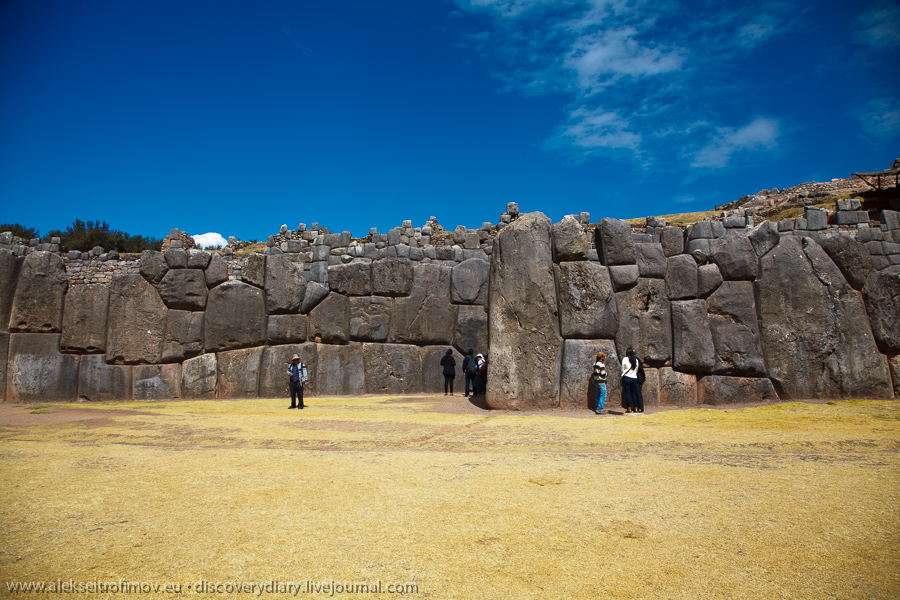 The walls of Sacsaywaman pierce the sky: 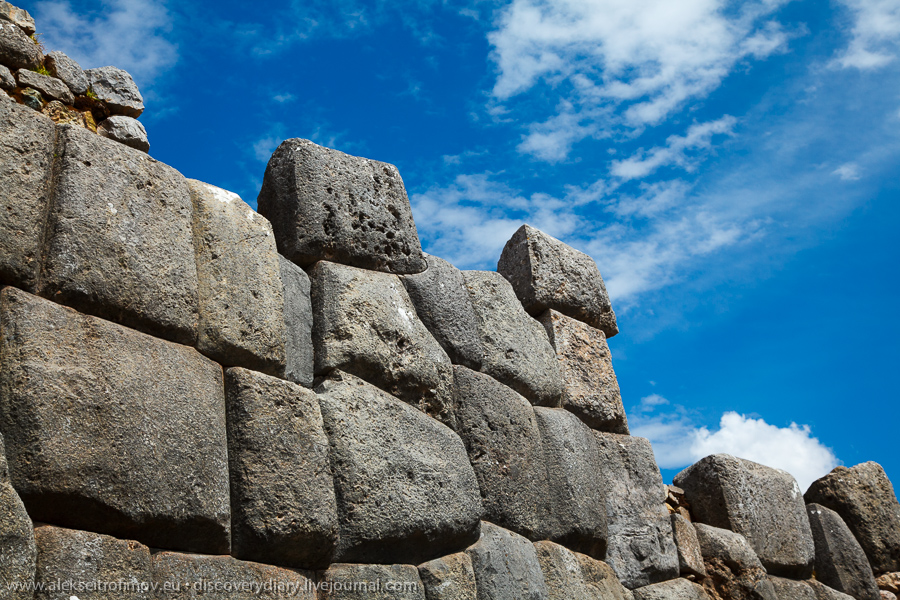 The gate in one of the walls. The Incas didn’t know the wheel, so no chariots and no need for broad gates. 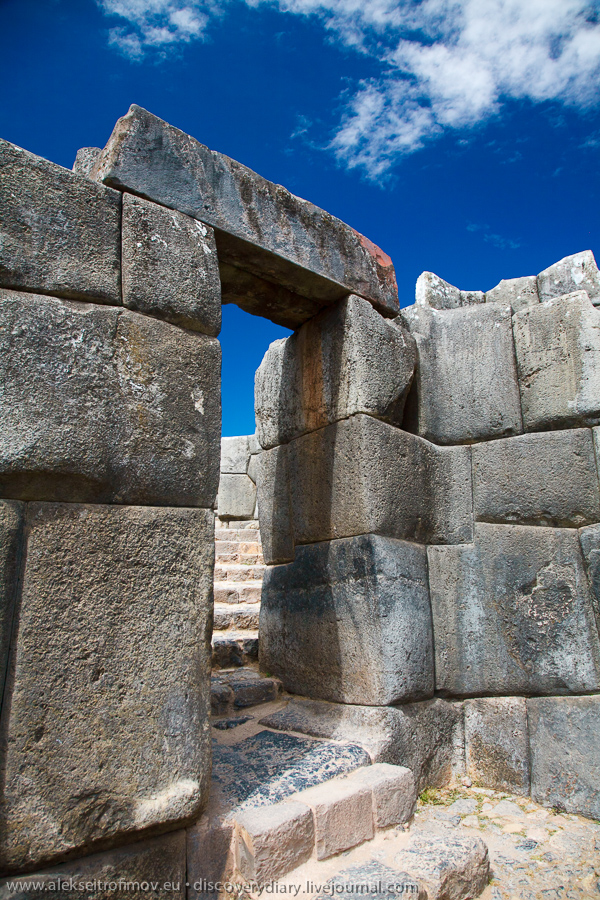 This is the view from the top of Sacsaywaman towards the North – to the Inti Raimi parade ground and the Throne of Inca. The llamas and vicunas seem like little toys from a distance. On 24 June the locals celebrate a huge festival on the Inti Raimi ground. Similar festivals are celebrated in the Maya temples of Guatemala as well as in the Tiwanacu complex in Bolivia. 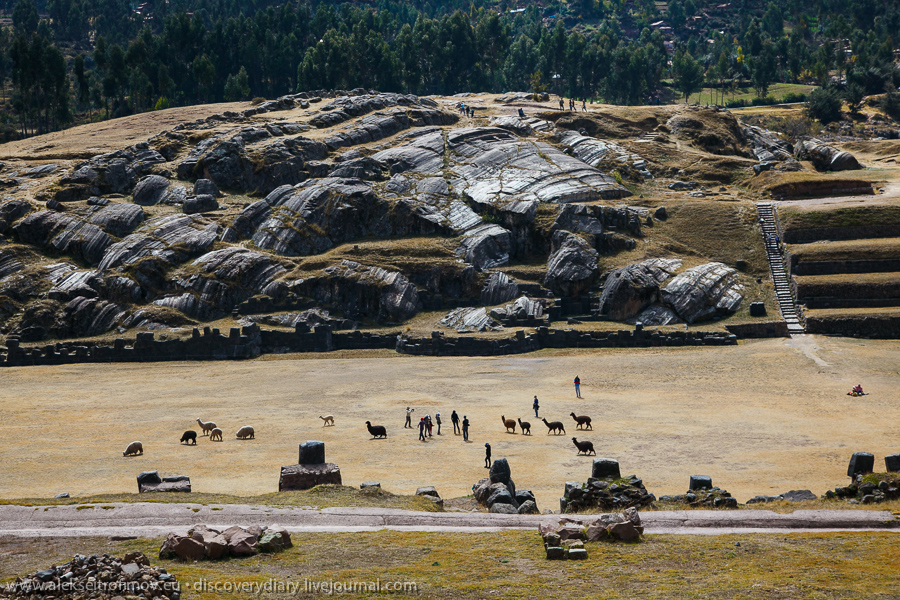 The other view from the top, this time towards the South, to the city of Cusco itself. Here we can also see the so-called terraglyphs, which are present on many mountains surrounding Cusco. ¡Viva el Perú glorioso! 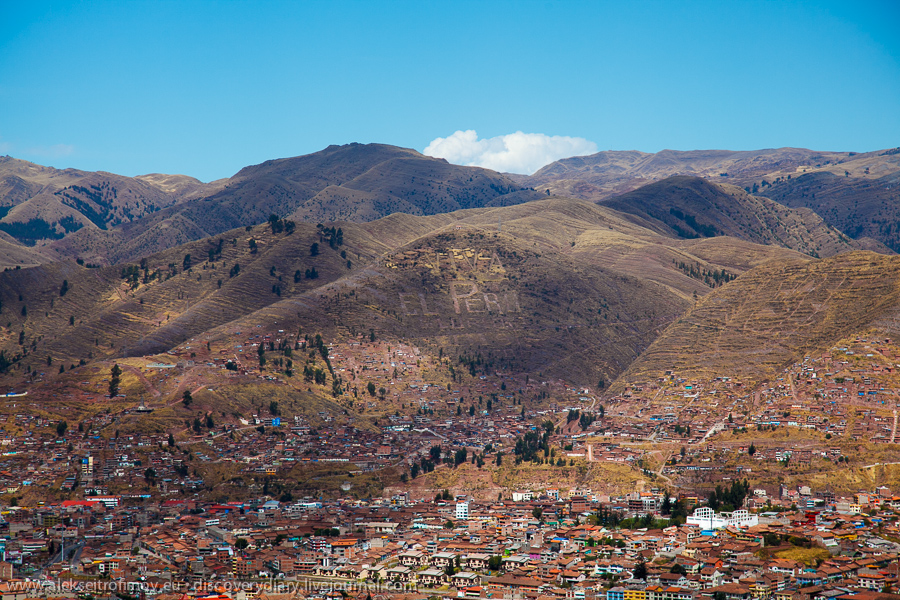 The view from the Throne of Inca. The parade ground, the three walls and Cusco at the back. 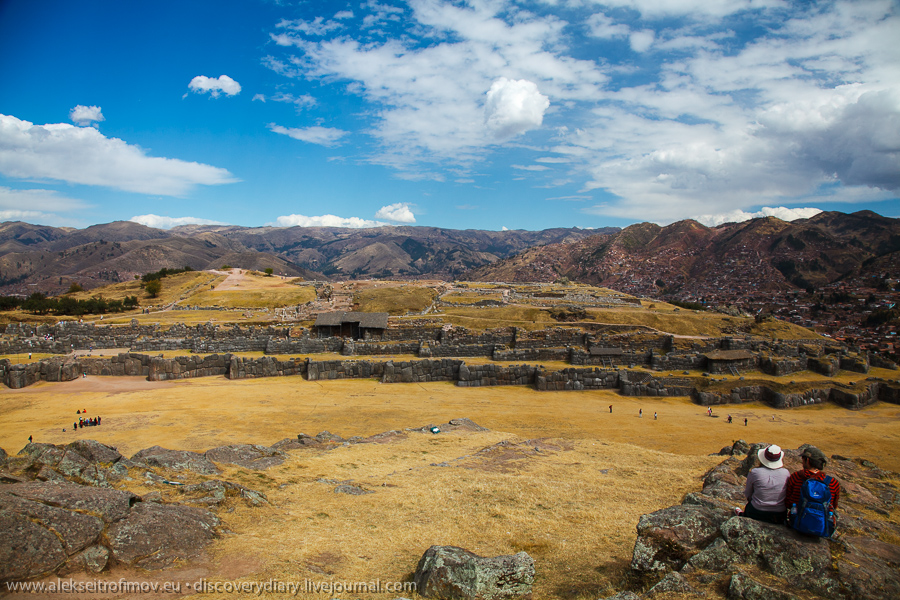 On the other side of the Throne of Inca there is this strange formation which allows you to slide down. Which of course I did. 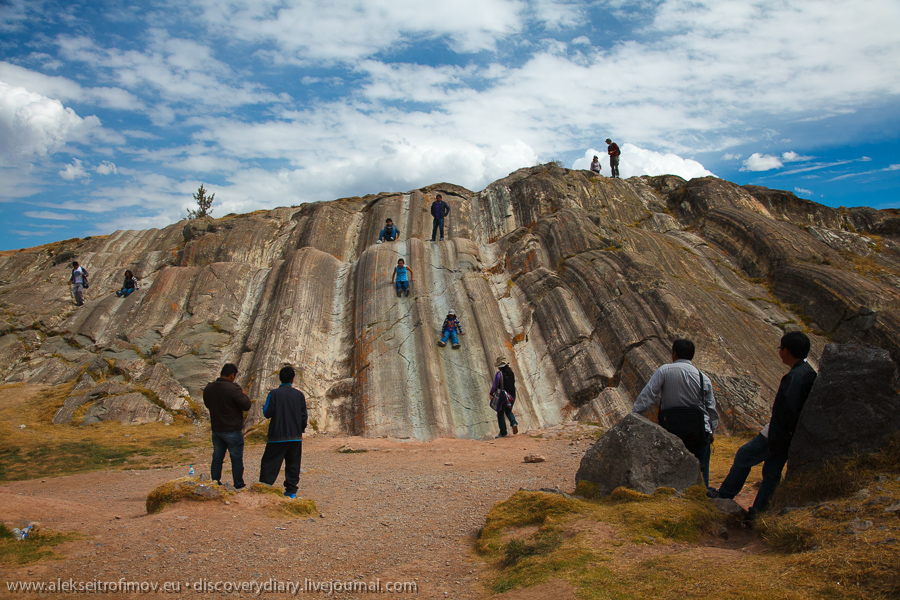 The fact that the rock looks as if it were melted by an explosion, and generally the size of the whole complex, makes some think that Sacsaywaman is an ancient polygon for nuclear experiments. 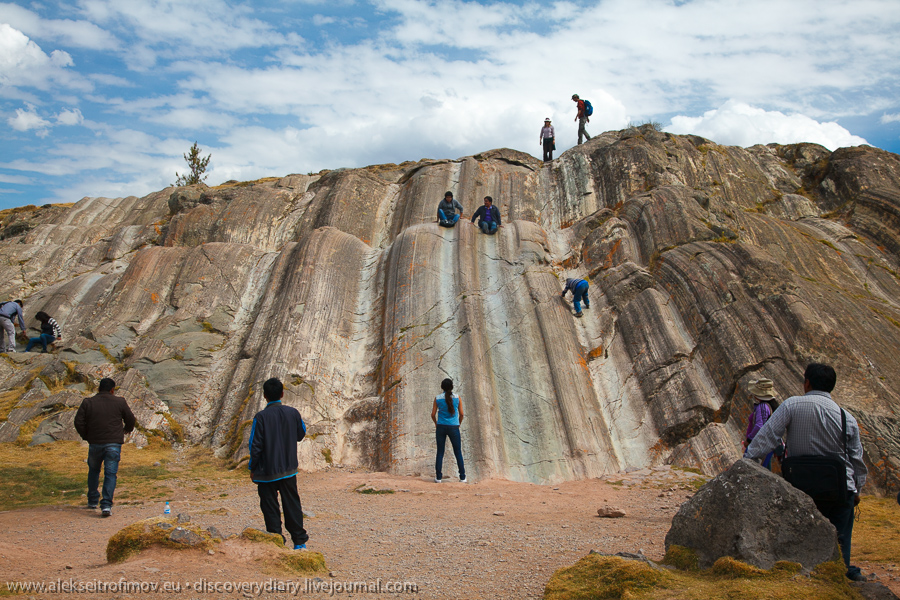 On the neighbouring mountain there has been installed a statue of Christ, inspired by Cristo Redendor in Rio. The Cuscan version is quite a bit smaller though. 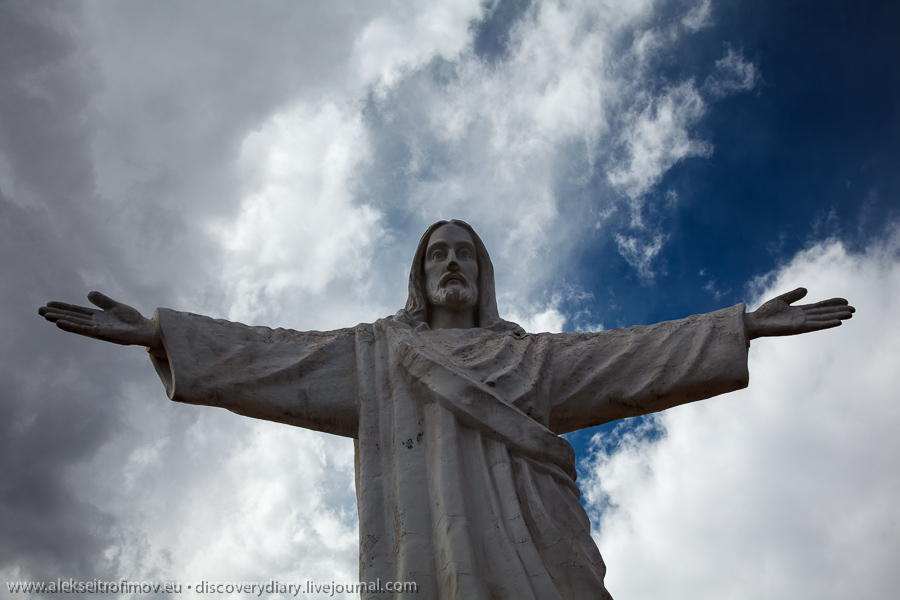 The view over Sacsaywaman from the feet of the statue of Christ: 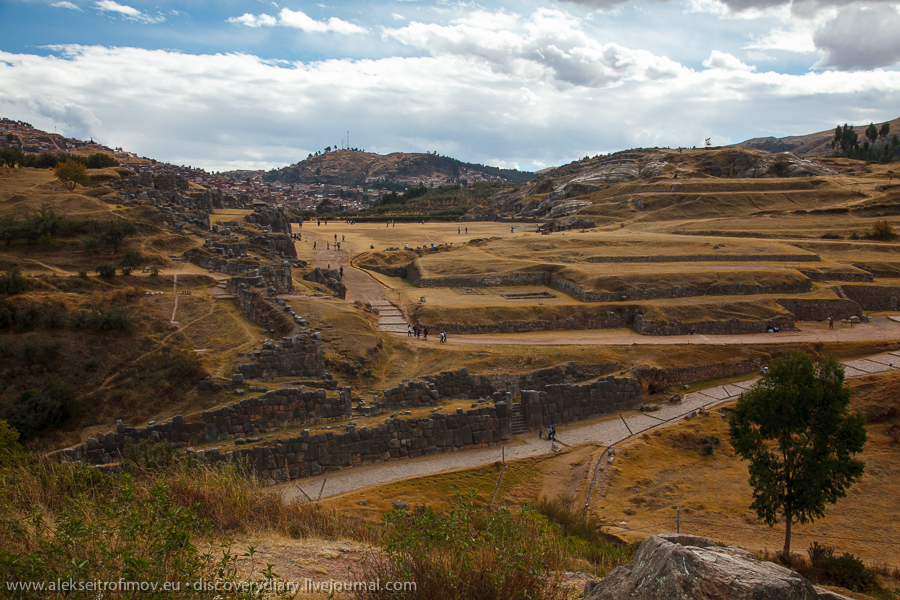