I came to Cusco early in the morning from Arequipa. Immediately I was struck by Cusco’s magnificent natural setting and its unusual streets.

Cusco lies in a narrow valley surrounded by an amphitheatre of mountain slopes. It was conceived and implemented in the form of a lying puma. The head of puma corresponded to the Sacsaywaman temple on a hill. The puma even had teeth – the walls of Sacsaywaman – and an eye – a circular main tower of that temple.

The view over Cusco from a church on the hill: 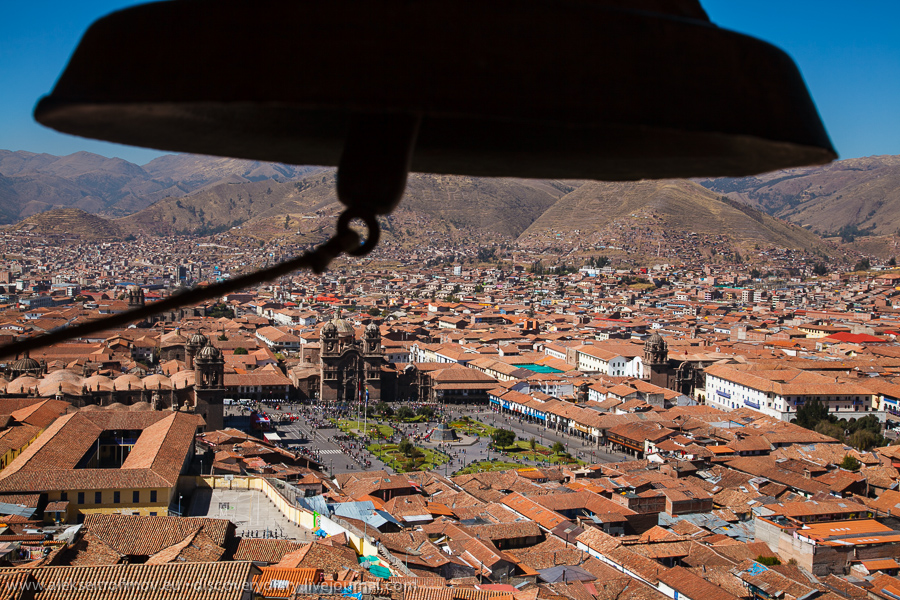 Cusco’s streets are very narrow, and at the same time perfectly straight, held from two sides by the high walls of city houses consisting of huge stones. All these churches and Spanish nobility houses were built over the Inca palace foundations. These foundations determine the plan of today’s city. 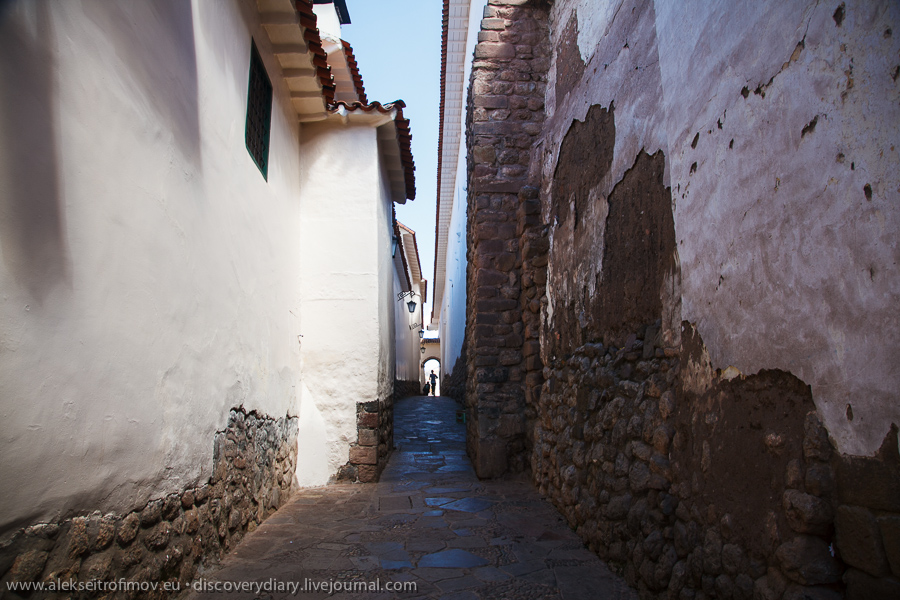 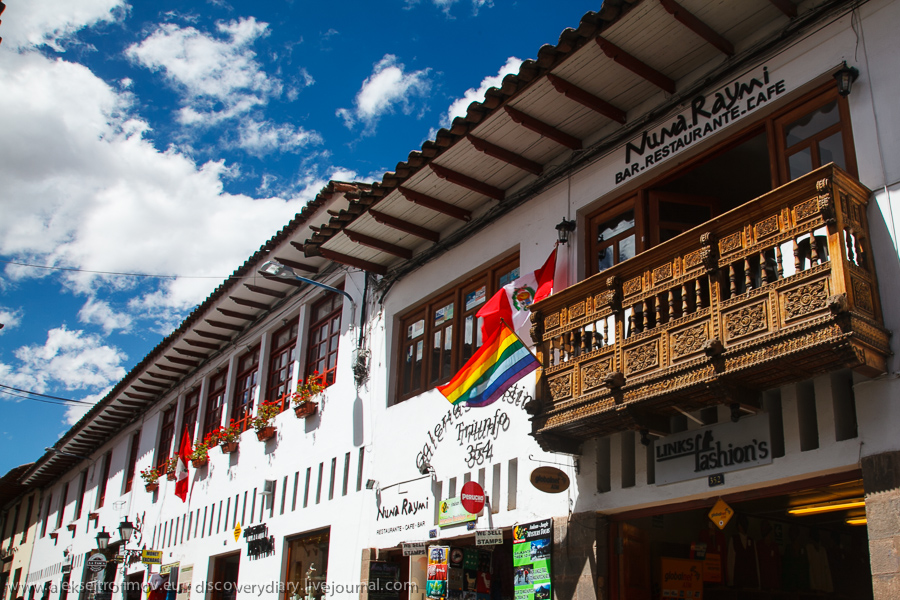 I happened to be in Cusco at the time of the Peru independence celebrations, at the very peak of the busy season. The independence holiday here is a four day long weekend. So on my very first day on the main square, Plaza de Armas (which basically means Parade Square) there was a parade of military units and gymnasium pupils, both wearing catchy uniforms. 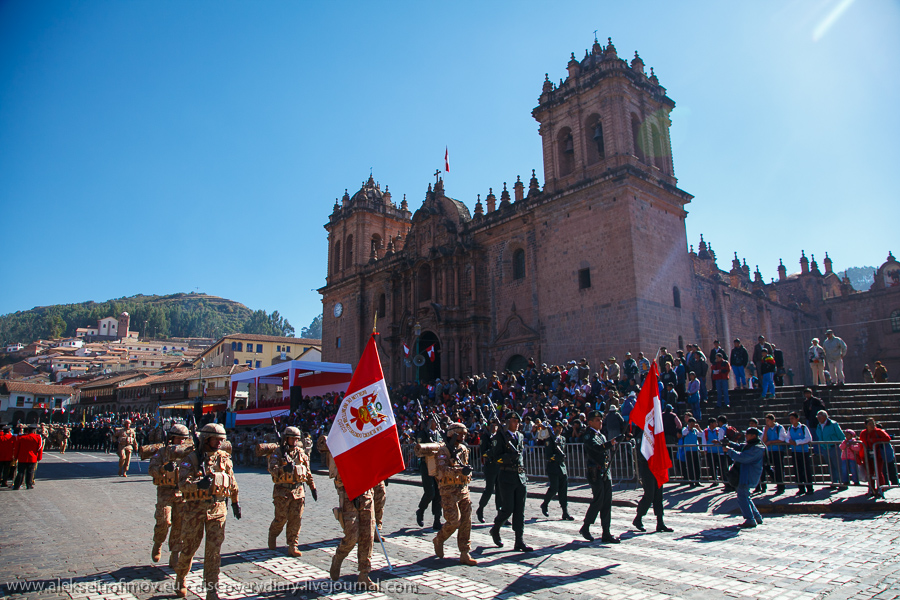 Preparing for the march: 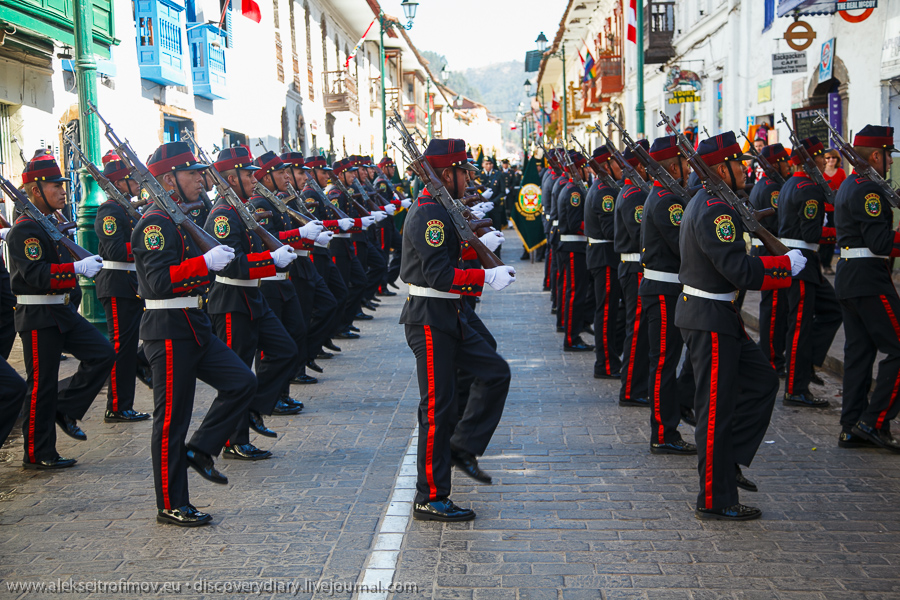 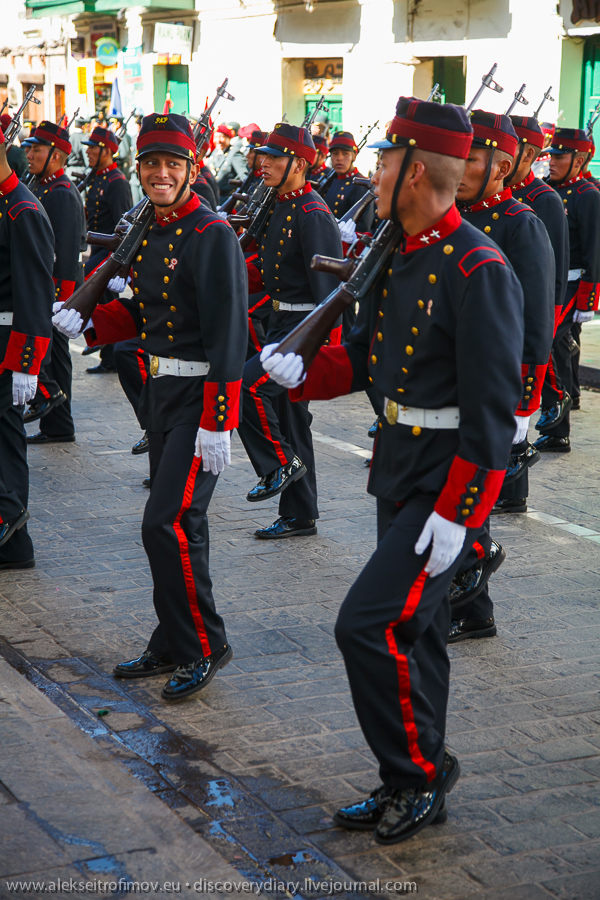 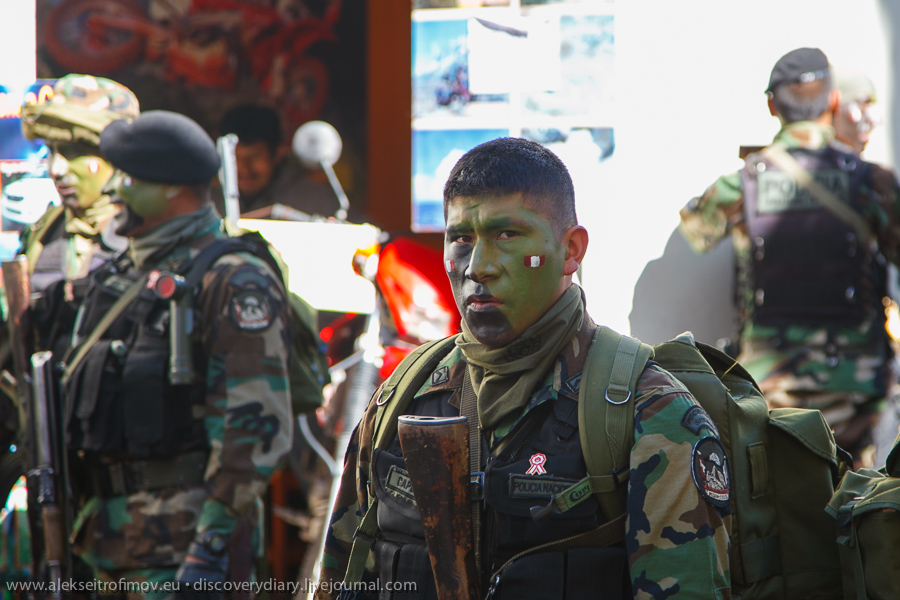 A pupil prepares for the parade: 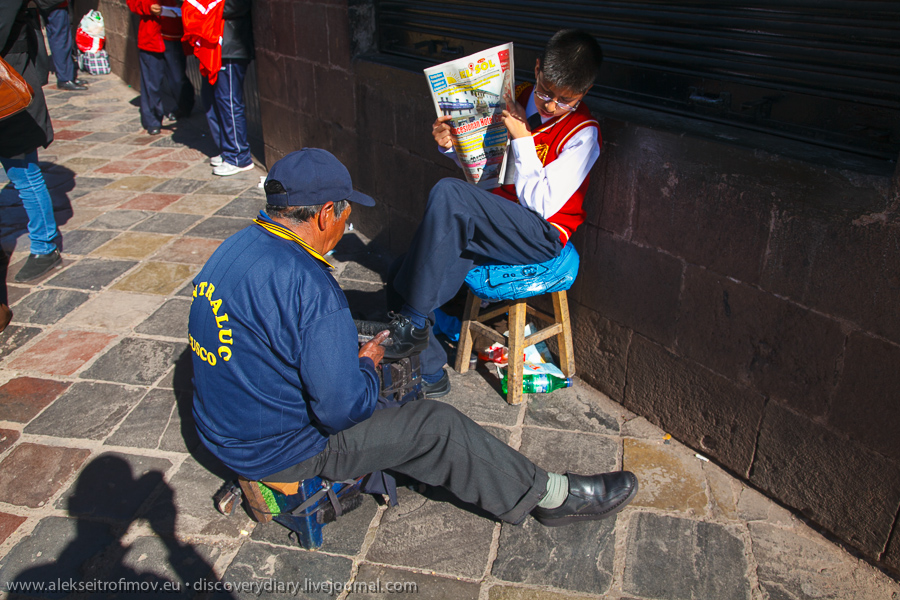 In the centre of Plaza de Armas there is a gilded statue of Inca Pachacutec, one of the founders of the Inca Empire. The statue was erected here only recently, and is clearly a part of the wave of the national self-recognition of the indigenous population. Nowadays all the Cusco streets have Inca (or rather quechua) names: Choquechaca, Pumacurco, Huainapata. The old Spanish street names are no longer mentioned. 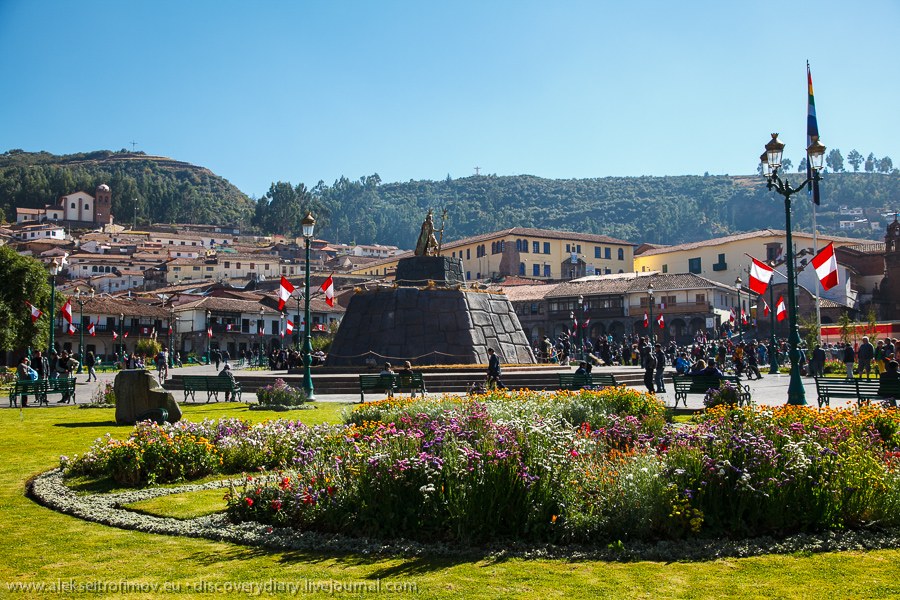 It is of course very weird to see this Spanish city built over a sacral imperial capital of the Incas, which shows itself all the time. In my recent trip to Cyprus I felt a similar indignation watching the Catholic cathedral in Northern Nicosia turned into a mosque without changing anything in its architecture. Here is an old Inca wall in a random Cusco restaurant: 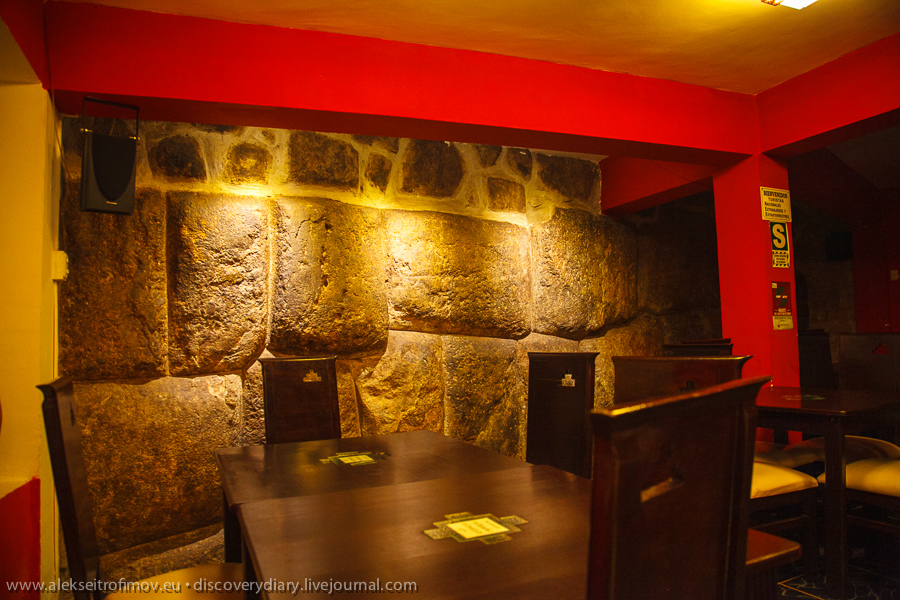 The main Inca temple, Qoriqancha, where the mummies of the dead emperors were held and venerated, was sacked by the Spaniards. Over it they built a church and a convent. Today the main Qoriqancha area, which roughly corresponded to the patio of the convent, is partially restored and open to visitors. The ideally fitting stones in the walls of Qoriqancha correspond to the so-called imperial masonry, which held the highest prestige. 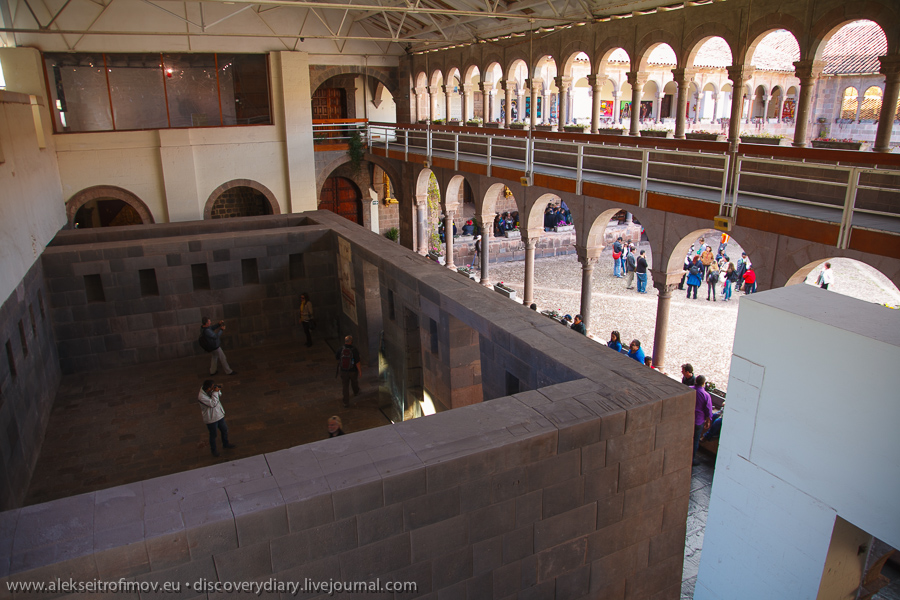 The perfect system of the Inca worldview is nothing short of astonishing. The main temple of Qoriqancha was in the centre of the system of 140 temples and sacral objects all connected with imaginary arrows that went in a circular fashion into every direction. Cusco (“Navel of the Earth” in quechua), the sacral capital, was conceived and built according to a plan in the form of puma.

Of course this perfectly regular construction rapidly fell apart when 50 vagabond Spaniards managed to cut its head. The view from Qoriqancha to Cusco: 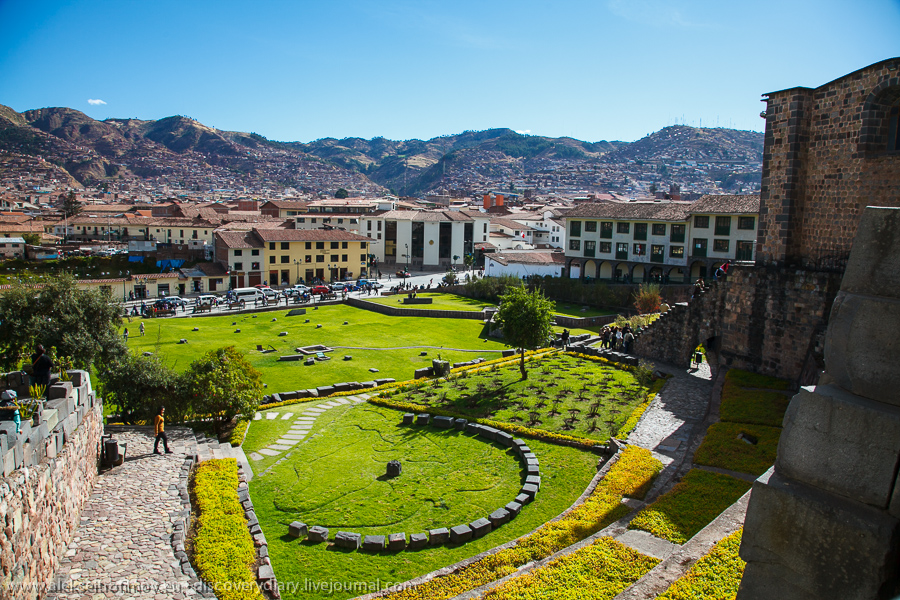 What I find most fascinating about other cultures and exciting about travel is the opportunity to find “another logic”, a different channel of thought, that may not have necessarily given a direct consequence in our culture, but which may have blossomed into something unimaginable to us today. When a civilisation faces a problem, oftentimes the winning solution only wins because at the time it held some temporary advantage, but it may not be best long term.

Instead of the constellations consisting of stars, the Incas saw in the sky the figures of darkness in front of the background of light. The Milky Way for them represented a hunter chasing a llama. 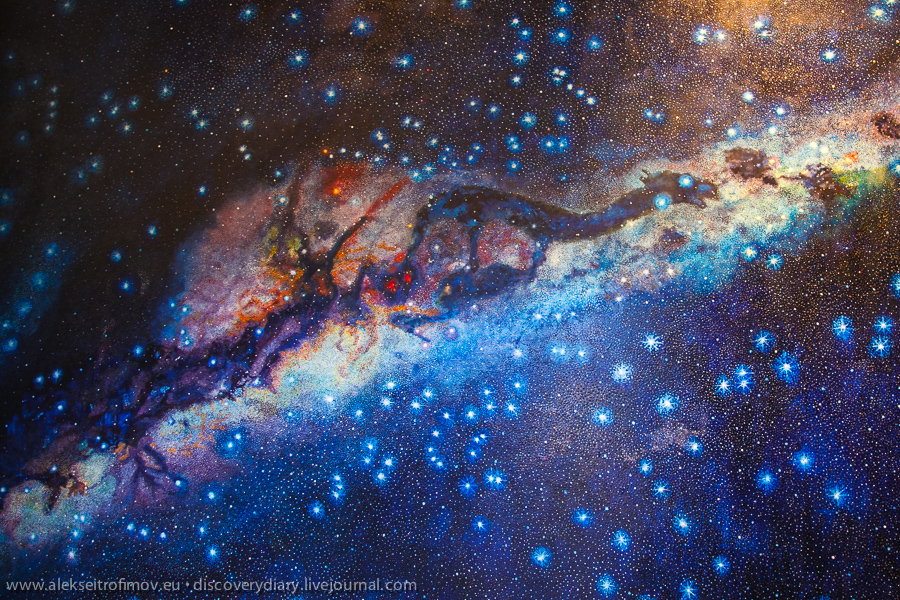 I felt a deep sadness contemplating the traces of the empire and listening to the same repetitive story of the fall of the Inca civilisation, the story of the cowardly execution of the last Inca Atahualpa by the Spaniard, in spite of his full implementation of their greedy demands (several rooms full of gold and silver). You get the feeling that in the whole history of Peru before independence there was only one date, a tragic, fatal date: 1524, the meeting in Cajamarca. The sadness invoked by this story is similar to the romantic sadness you feel about Napoleon’s destiny, eternally defeated in every history book by the treacherous English at Waterloo and sent to the other planet of Saint Helena.

On the other hand, if it so happened that Incas would have been stronger than the Spaniards due to the history’s lottery, I don’t really doubt that they would be just as fierce and merciless towards the Europeans.

One thought on “The imperial capital”