Two reasons for it.

It is absurdly difficult to organise a visit there. You cannot buy an entrance ticket via the website – you can only see how many tickets are left for a particular date and as you refresh the page, how they disappear. There are 2500 tickets allocated for each date and they sell several days in advance in peak season. You can buy a ticket from Europe, but then you are obliged to take the whole package, including also the train tickets, possibly an hotel in Aguas Calientes and certainly a sizeable intermediary fee. I decided to organise it all on the spot. So on a sunny morning I went to the Department of Culture in Cusco and bought an entrance ticket there – for a date 4 days ahead; then bought a train ticket – at 100 dollars very expensive for South America. You cannot reach Aguas Calientes, which is a start off point for Machu Picchu, in any other reasonable way except by train. True, I saw a helicopter pad in Aguas Calientes, if you’re feeling splashy. Therefore the two rail companies serving the line have a nice oligopolistic situation which allows them to charge nice oligopolistic prices. Admittedly when you ride the train on a narrow one line track sandwiched between the steep mountainside and the Urubamba river down below, you have trouble imagining how a road could fit in there. 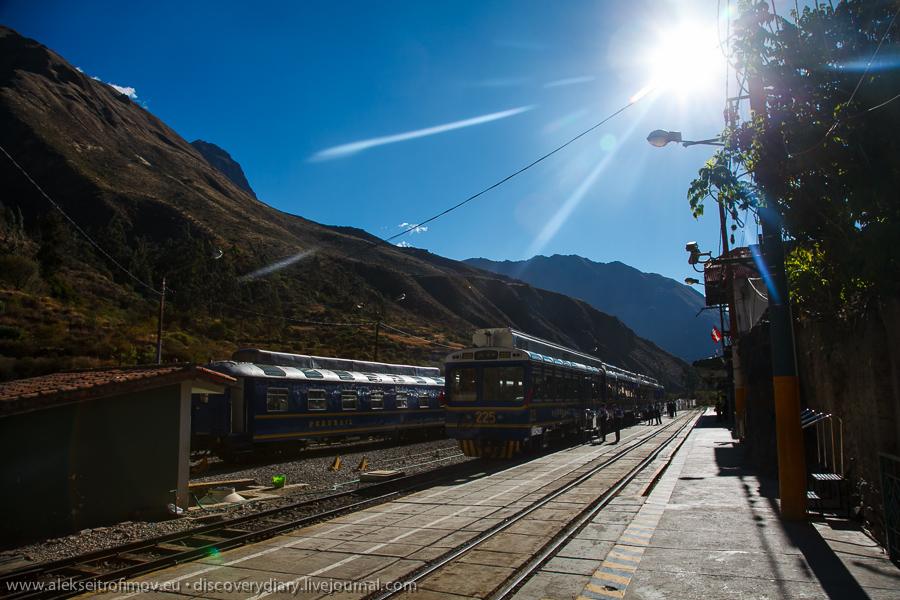 Urubamba valley, the rail tracks hidden among the greenery on the left: 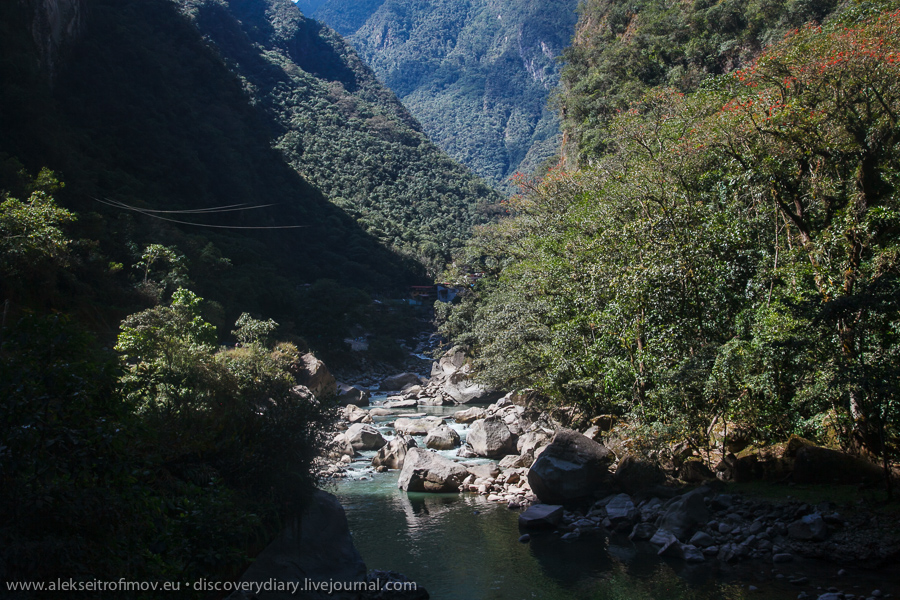 But the true absurdity starts in Aguas Calientes. The site of Machu Picchu opens at six in the morning. I got up around 4:40 to catch the first absurdly overpriced bus up. On leaving my hotel, my eyes refused to believe the hundreds and hundreds and hundreds of tourists in front of me, all hoping to get to the same spot at the same time. Standing in this ridiculously long queue at 5 am in the morning, shivering from cold, and then standing in another similar queue at the site entrance to get through the ticket control, I could hardly believe the sheer absurdity of it all.

Well as you’ve already guessed, the second reason why it’s absurd to visit Machu Picchu is because the site itself is some kind of an absurd marvel of nature. The mysterious Inca city floats in the space between the sky, the mountains and the abysses surrounding it from every side. What is it? How could it be built? Why? As the rays of the rising sun light up the fortress, you forget it all and cannot help feeling awed and amazed.

Once inside Machu Picchu, I immediately went up the narrow path to Intipunku, the Gate of the Sun, which is about an hour from the site itself. The Inca Trail trekkers enter the site from that point, and it offers a great view of the morning sun rising over it. 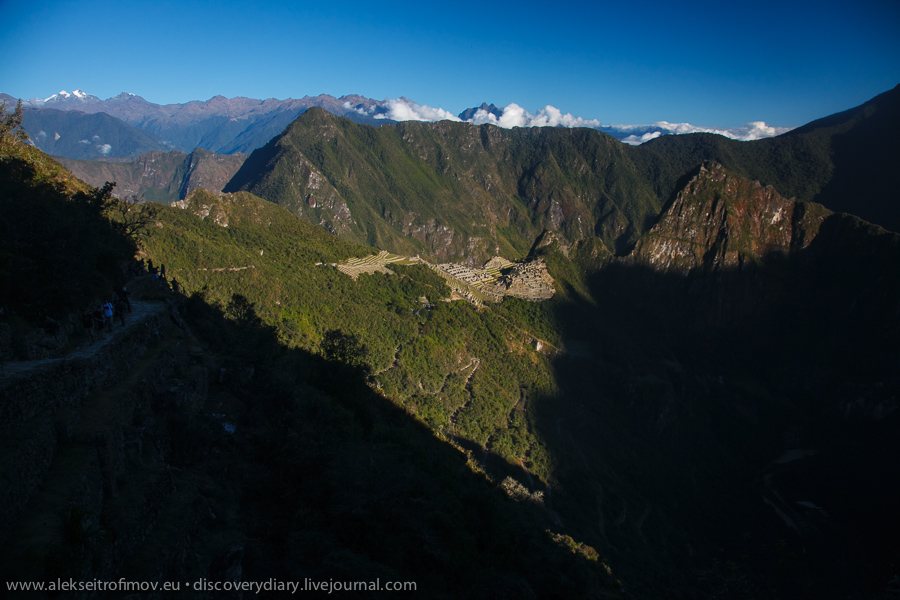 The serpentine path is the road that the buses take to get to the site. The path on the left is the Sun Gate – Machu Picchu path.

From the same vantage point: 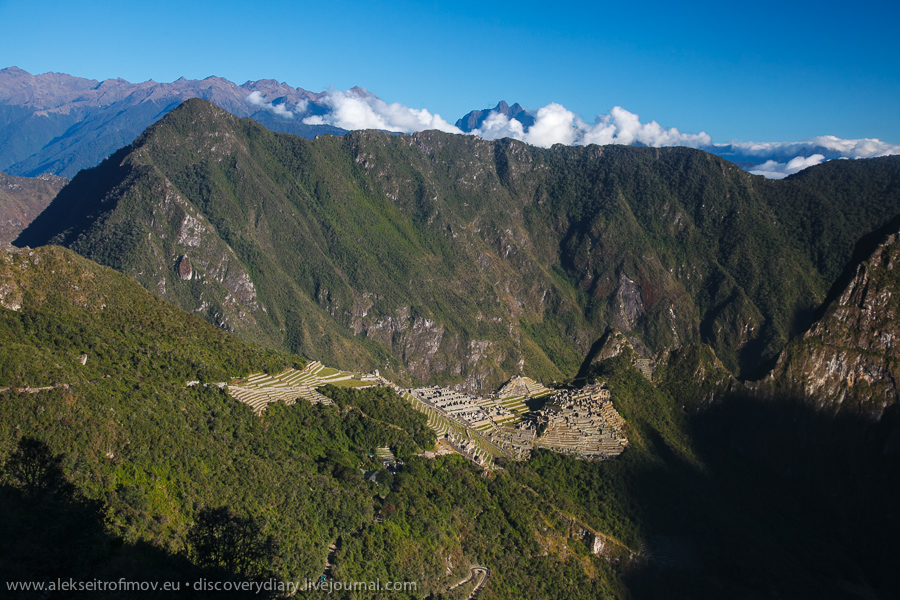 After that I went down to the Funerary Rock, from where you can take the standard postcard view of Machu Picchu: 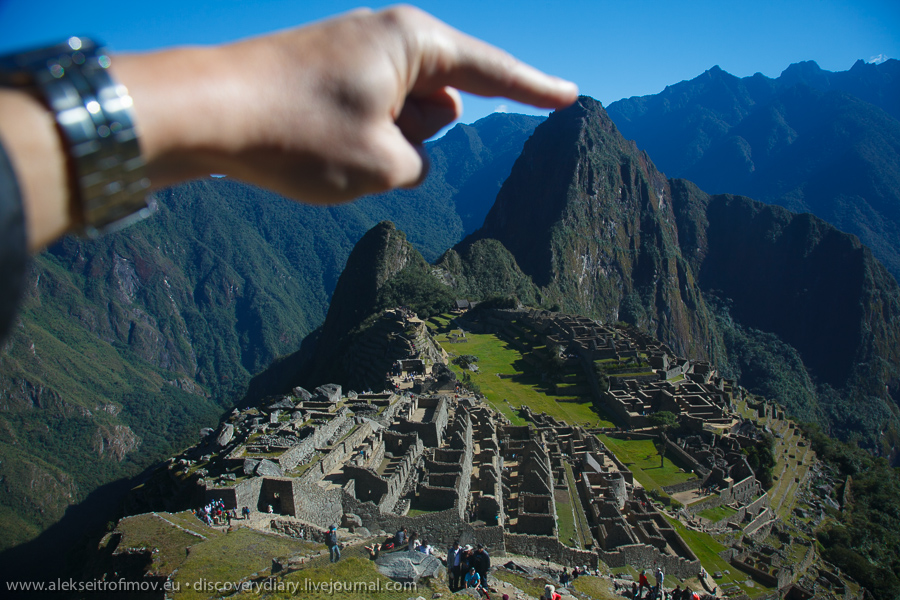 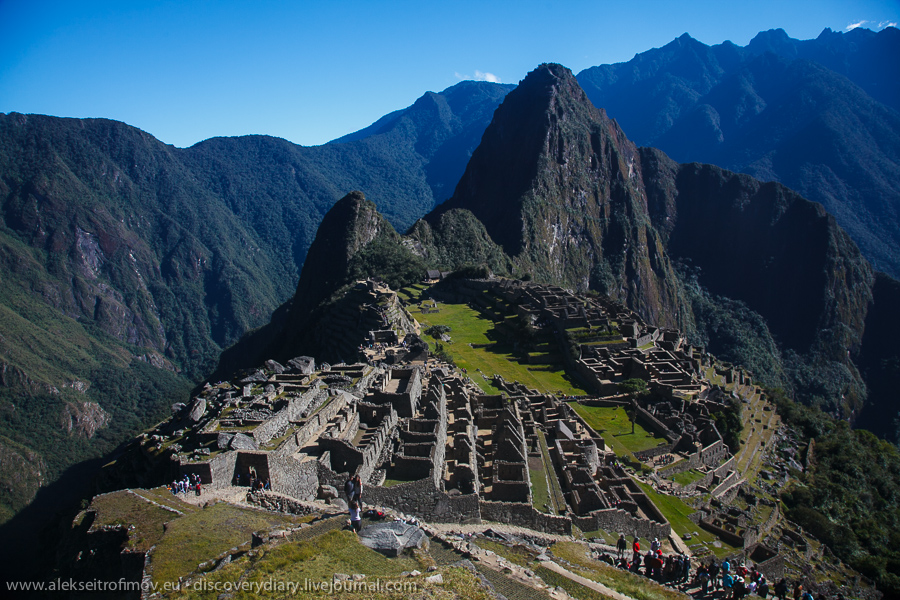 To the right from there the omnipresent agricultural terraces descend sharply down: 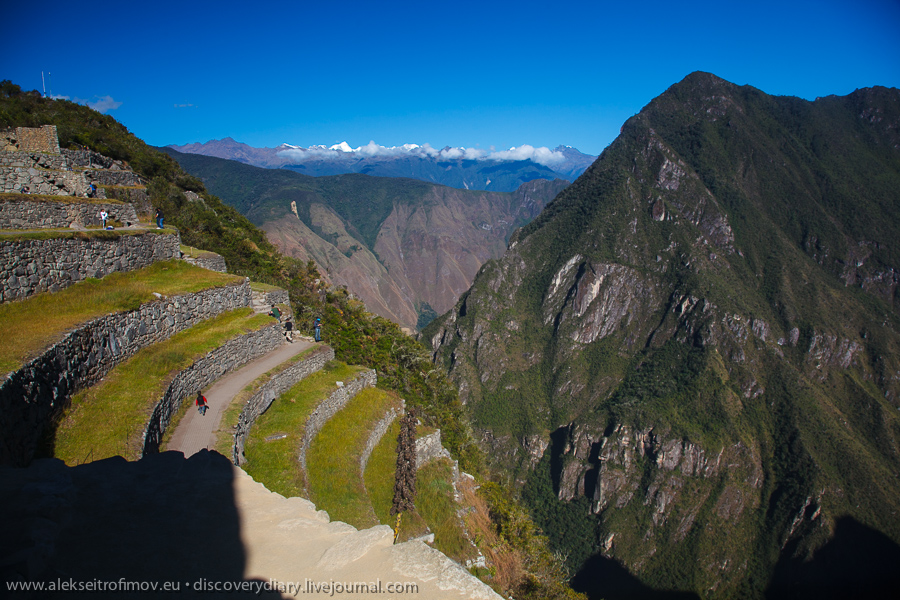 What makes Machu Picchu so mysterious is not only its location, but also the strange historical circumstance that the Spaniards never found it and never even knew about it. It is unclear today when exactly it was abandoned by the Incas. The local guides say that within 6 months from being abandoned the whole site would have been completely covered by the jungle, and there would be no way to identify it from the valley below. Still it is poignant to imagine a Spanish convoy exploring the Urubamba valley, looking up and failing to grasp the winter residence of the Inca himself, while some hiding nobles or priests are looking down in trepidation. 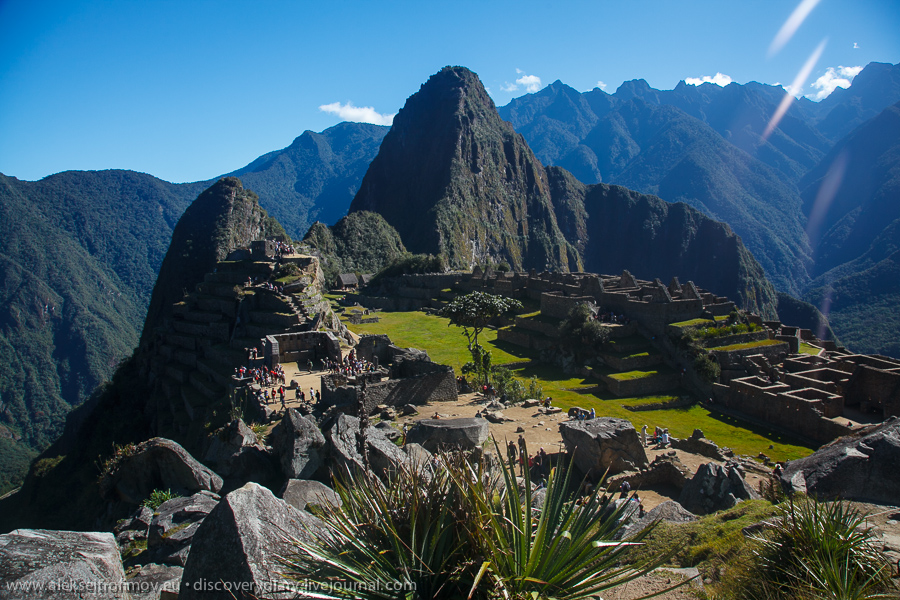 It appears that the Inca himself spent the winters here – it gets very cold in Cusco, while Machu Picchu lies 1000 metres lower, on the side of the Amazon basin, which ensures a softer climate. Still the fact that they keep finding new access roads leading here from every side, as well as secondary ruins in surrounding mountains, demonstrates that Machu Picchu held other important functions, perhaps religious, perhaps as a trade nexus.

The Temple of the Sun and the adjacent Sacerdote’s quarters. 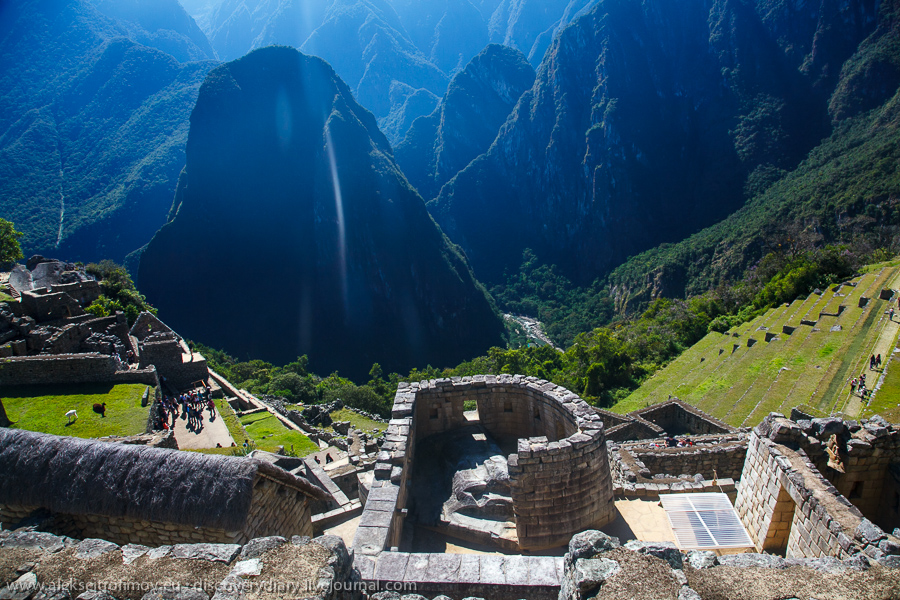 Under the Temple of the Sun there is a natural cave, used apparently to preserve the mummies of the important persons. 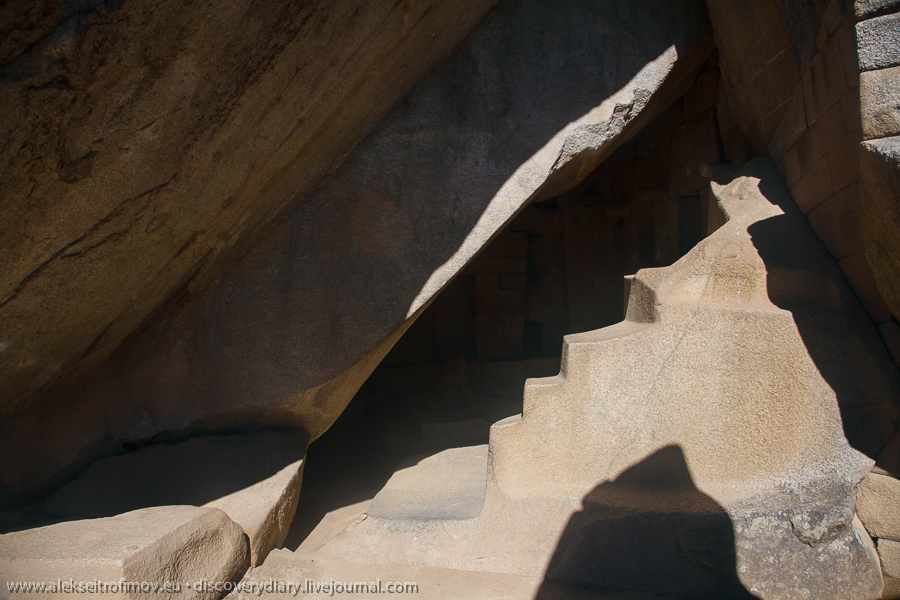 The Incas did not discover the wheel, so to build this complex must have cost them an incredible amount of manual labour. The most difficult part was to build the foundation of the complex, which 500 years down the road still holds it all together.

Advanced methods of the Incas are only surprising if we expect the Incas to be a kind of noble savages. When we learn that these supposed savages had made important advances in some areas of human knowledge, we go: How? Impossible! Must be extraterrestrials who helped them! But in the same way as Laplace said to Napoleon that he “didn’t need that hypothesis”, we don’t need to postulate aliens. There is no reason why the Incas couldn’t have done what they did without the outside help. The only sad thing about it is that the organic growth of their civilisation, which might have yielded rich discoveries unimaginable today, was violently interrupted at Cajamarca, their empire plundered and then turned into an insignificant colonial backwater.

The main part of the city was divided by a large parade ground into two parts – the Upper Town (palaces and temples) and the Lower Town (warehourses and perhaps some living quarters). The view from the Upper Town to the Lower: 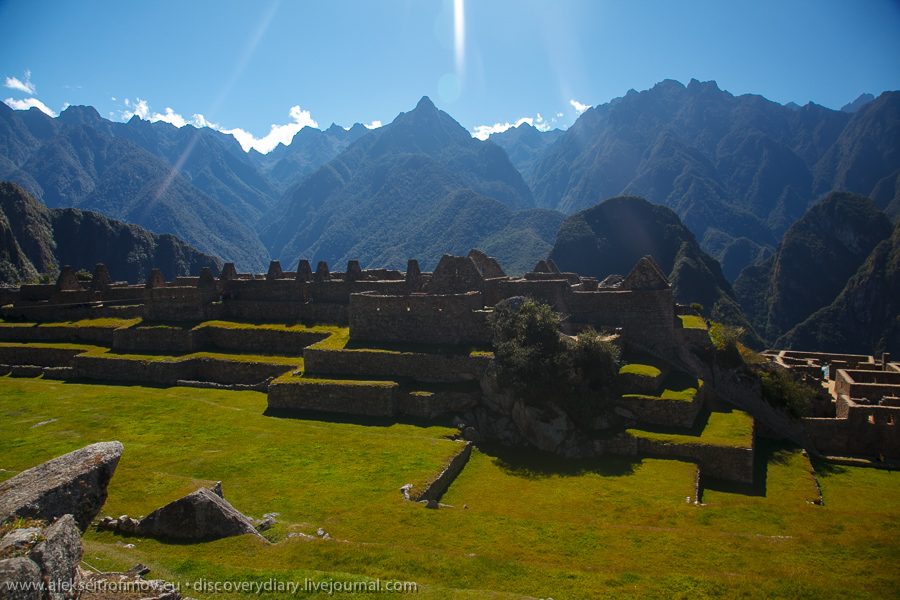 From the Lower Town to the Upper: 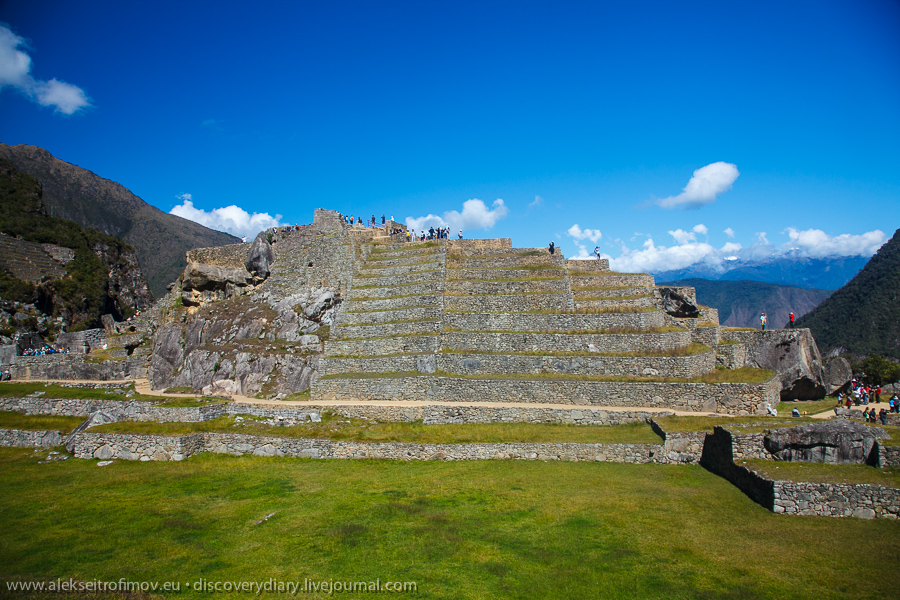 Intihuatana, the Sun Hitching Stone, is located in the highest point of the Upper Town. Its midday shadow is longest on the day of the winter solstice, and the Incas believed that it keeps the Sun from disappearing altogether. It was probably used as an altar for sacrifices, in addition to its use as an astronomic tool. When I was there, an English speaking group surrounded it, opened their hands towards and started to receive energy from it thusly. I too attempted. 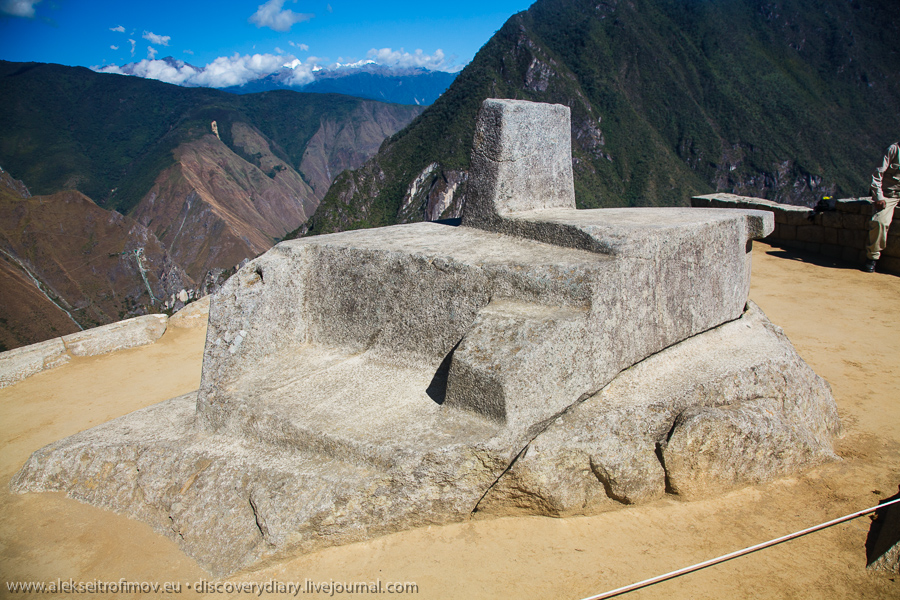 The view from one of the balconies in the Lower Town. I sat there for perhaps half an hour, dosing off at times, then opening my eyes again and flinching from the sudden absurdity of the open space below. 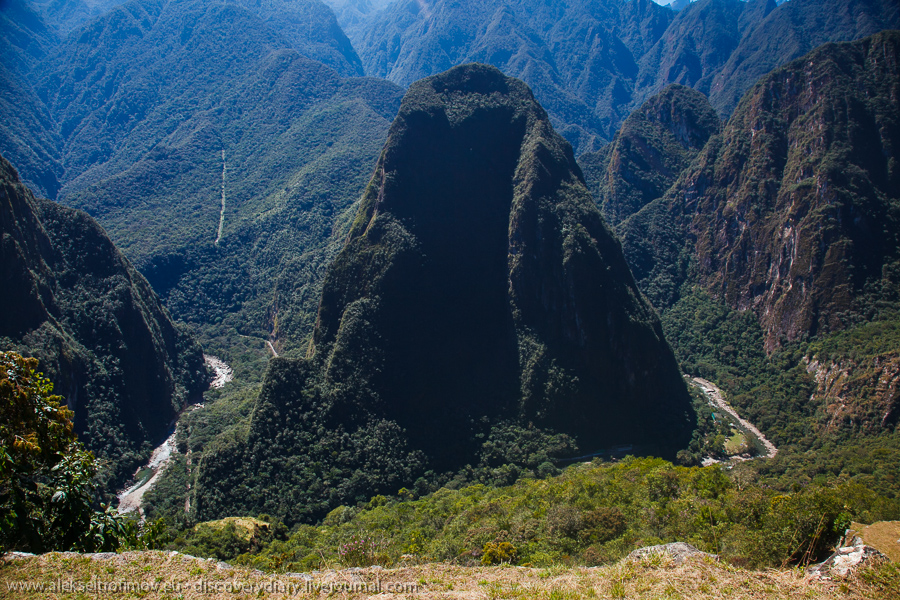 To get the feel of the space:

And why you should not go there? Well so that others have more of it, obviously 🙂

One thought on “Don’t go to Machu Picchu”