The universal need to feel special presupposes that the attention we receive was somehow earned by us. Such is the effect of the Western individualism on travel. A tourist affected by this individualism looks for the experiences that would appear to be linked to the tourist in an intimate, personal, authentic way.

While researching Lake Titicaca online, I compared two routes: the islands Uros – Amantaní – Taquile on the Peruvian side versus the islands of the Sun and the Moon in Bolivia. Internet seemed to suggest that the Bolivian side is way more “touristic”, while the Peruvian side offers an “authentic” experience, in particular if one stays with the local indigenous family on the Amantaní island. So I decided to experience this. On a night bus I came from Cusco to Puno and immediately in the morning took a boat towards the floating islands of Uros. 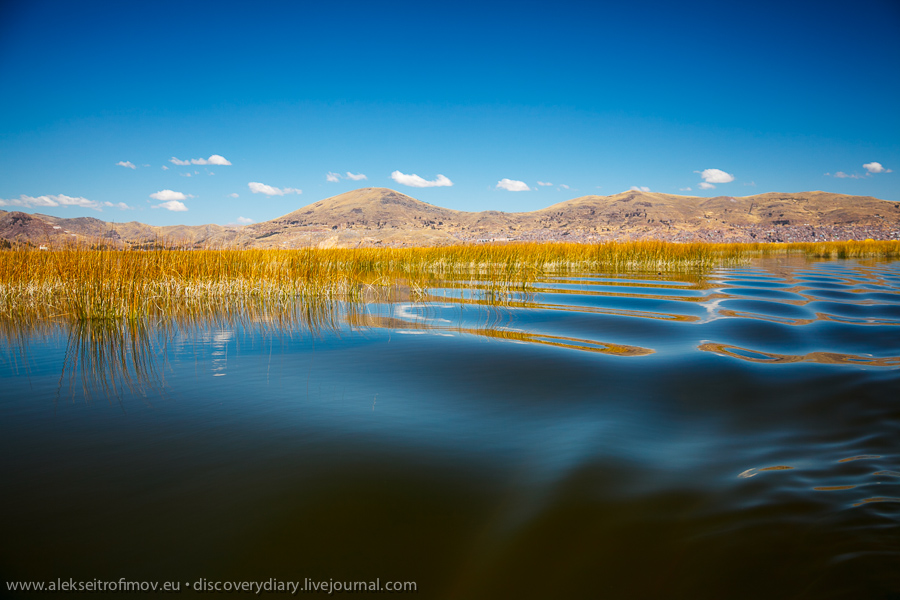 The incredible water of Titicaca, shiny, as if greasy. 3800 meters above sea level. 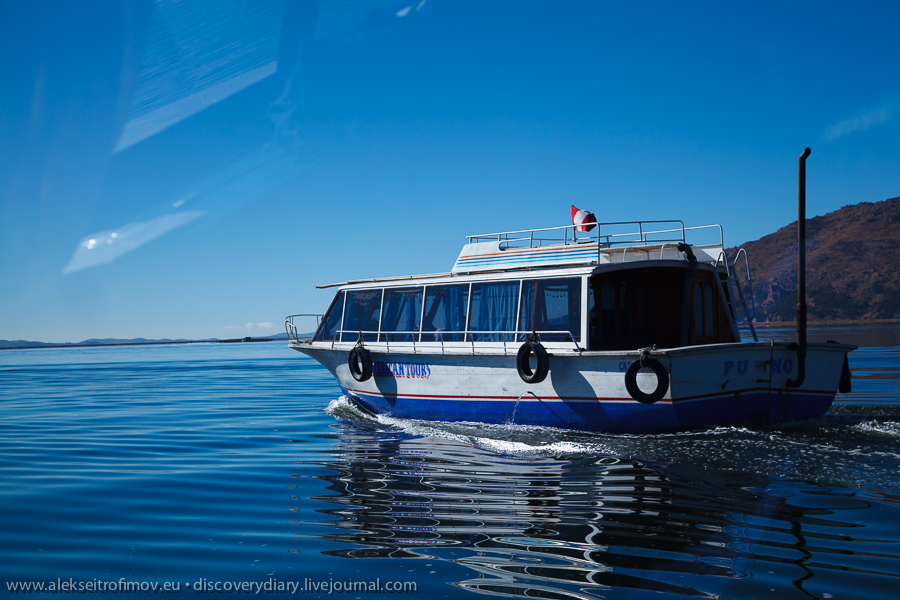 The floating islands of Uros are manmade. The Uros people learned to create them from reeds many centuries ago to escape the aggressive invaders. Today the Uros have forgotten their ancient language and speak Aymara, one of the two languages of the surrounding tribes (the other being Quechua, the language of the descendants of the Incas). 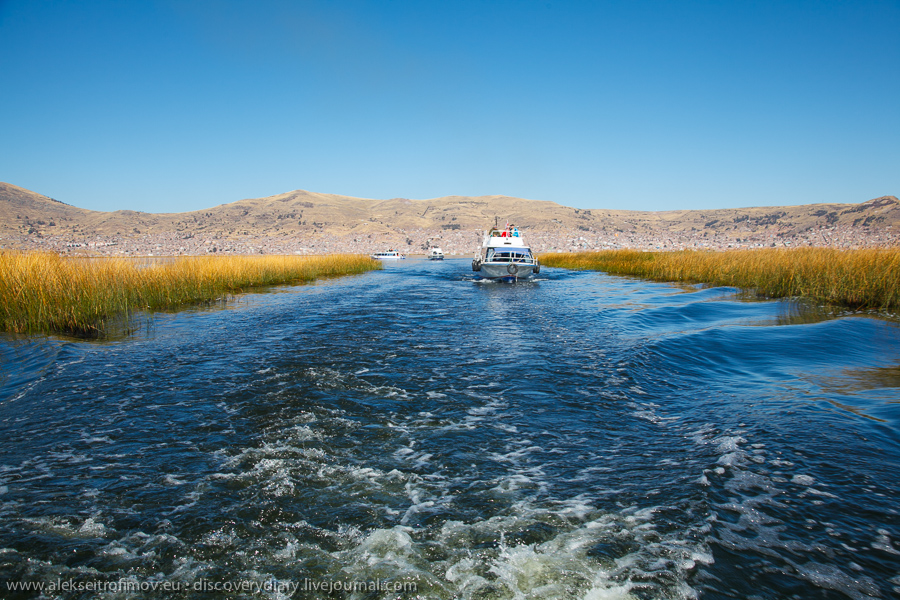 Already a few kilometres from the shore. 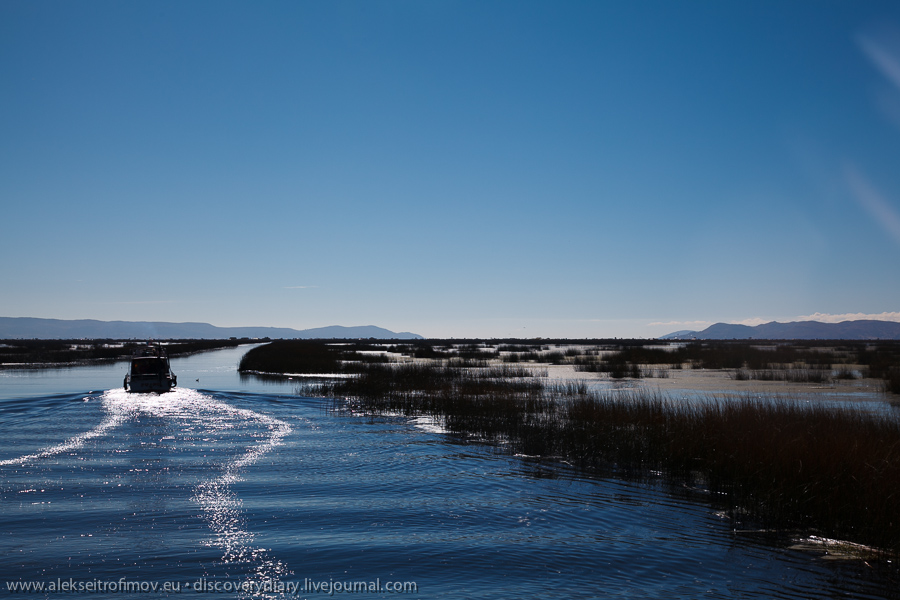 On a floating island. The watchtower is also known as “the telephone”. Although now that most islanders possess mobile phones, the watchtower is no longer used for this purpose. 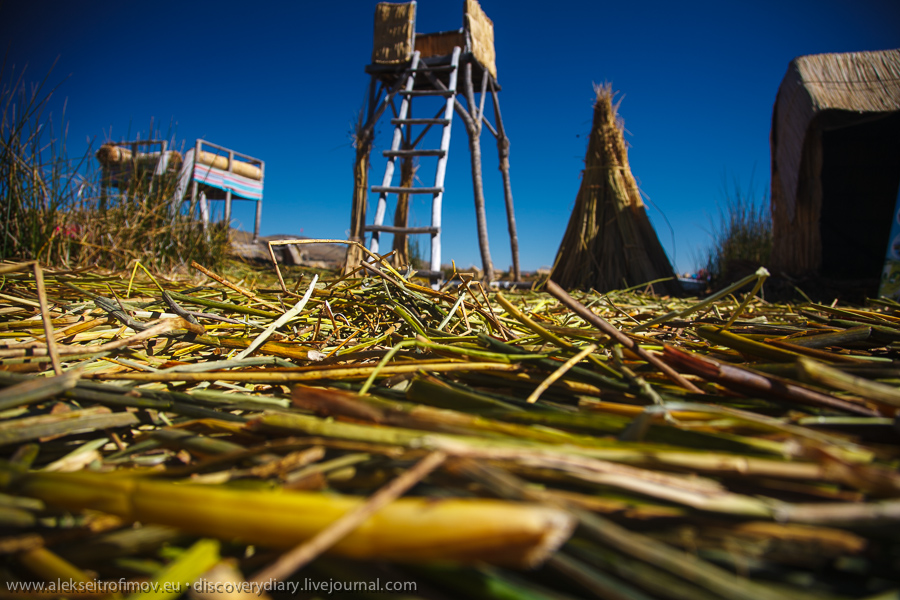 The view from the tower: 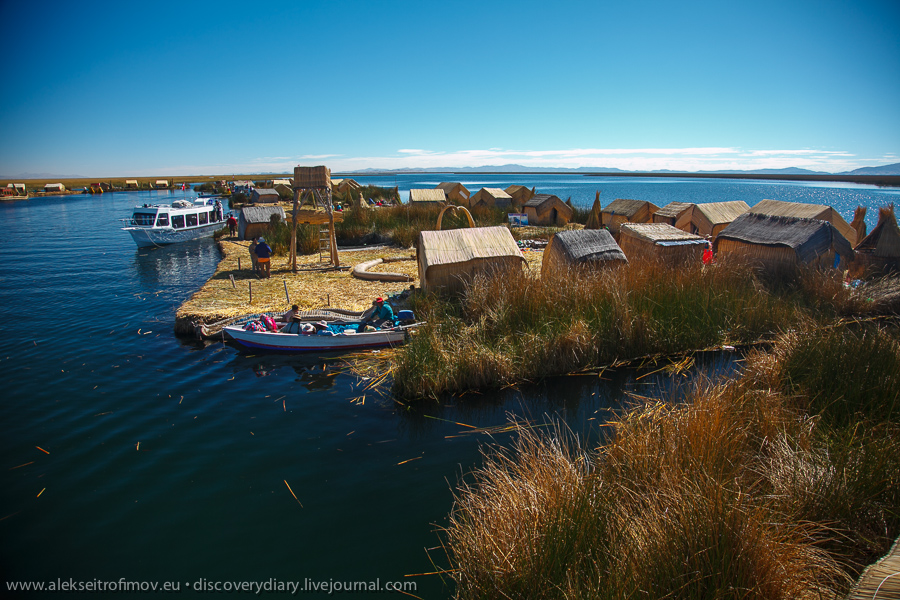 Uros floating islands. The majority of the islaners welcome the tourists, but there is a group that rejects the commercialisation of their way of life. That group lives on floating islands much further towards the centre of the lake. The tourists are not invited there. 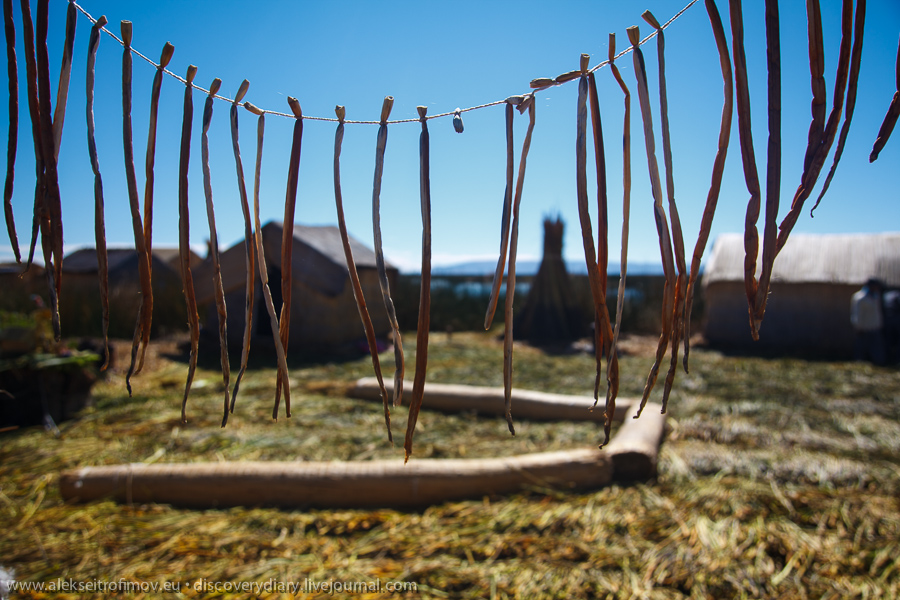 The dwellings on the floating islands: 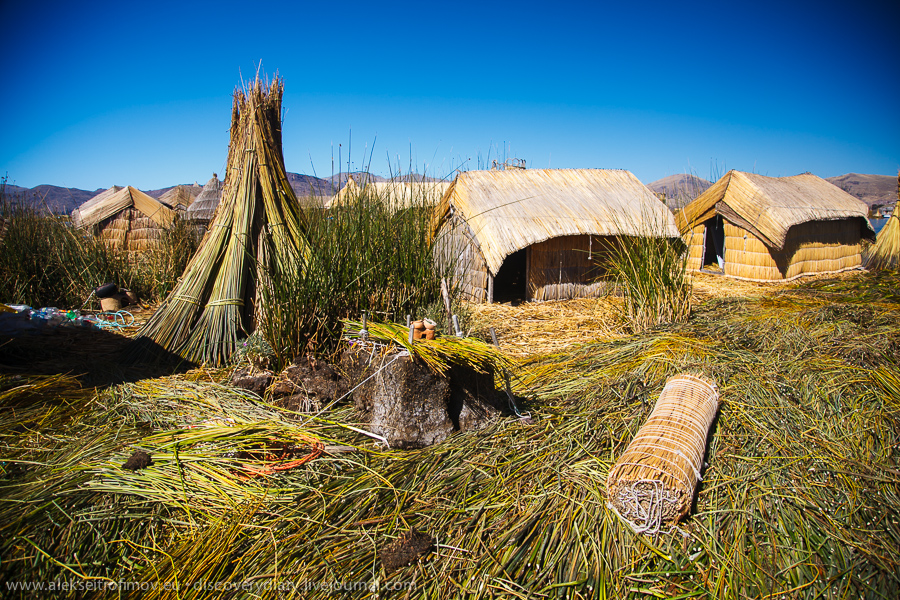 Toys offered to the tourists: 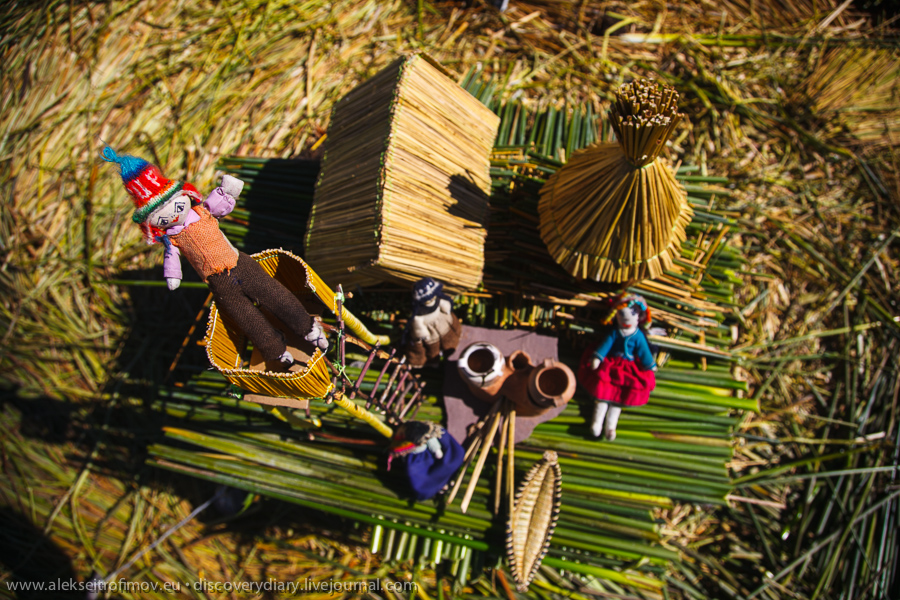 The underwater part of the island, which one can see from the shore. The floating islands are very small, you can circumvent an island in 5 minutes. The reeds keep on growing while the island serves its inhabitants. The islands slowly fall into the water, and therefore each two weeks a new layer of reeds needs to be put above the island. New islands are significantly higher than the old ones. An island lasts around 30 years before completely submerging. 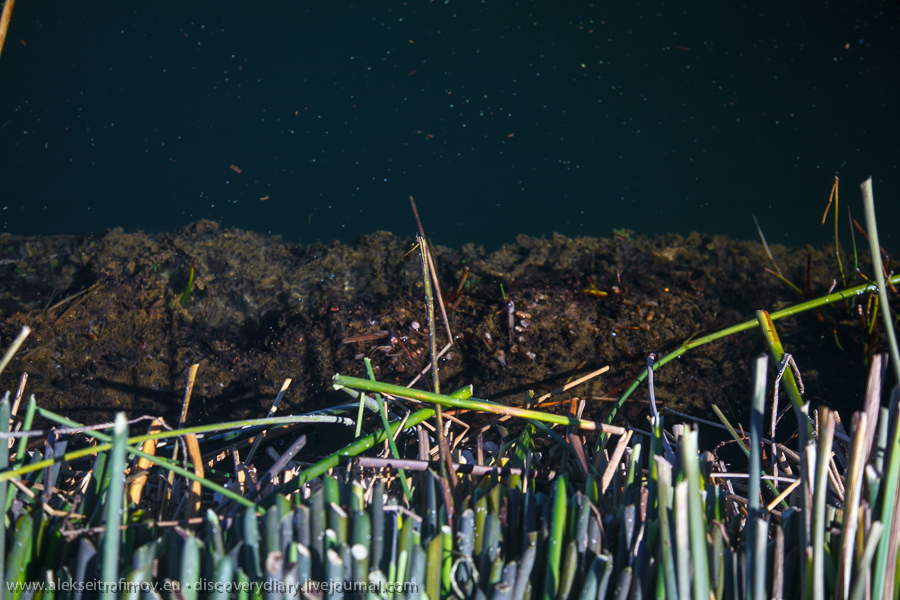 Another island, way more commercial, and our boat: 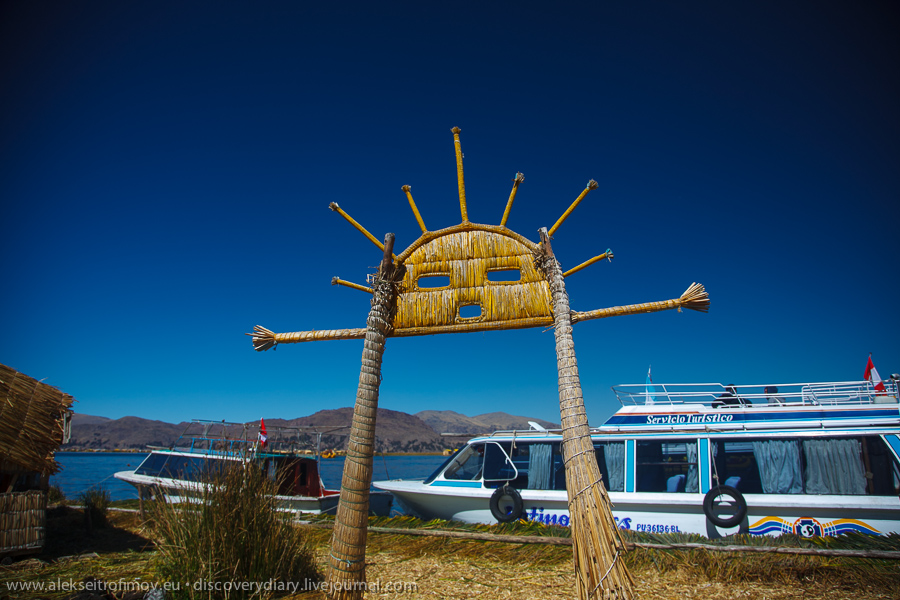 From the Uros island it takes about 3 hours to reach the island of Amantaní. Since the tourists are a rare source of income for the inhabitants of that island, there is a special rotating system which distributes the tourists first between the 10 communities of the island, and then between families within each community.

Our hostess Ester was rather reluctant to tell much about her life, but explained that her community Lampayuni had received tourists for the first time that month, and her family had not received any tourists for two months. This is the room where I spent the night. Very civilised, but nothing like the “authentic” experience that we imagined. 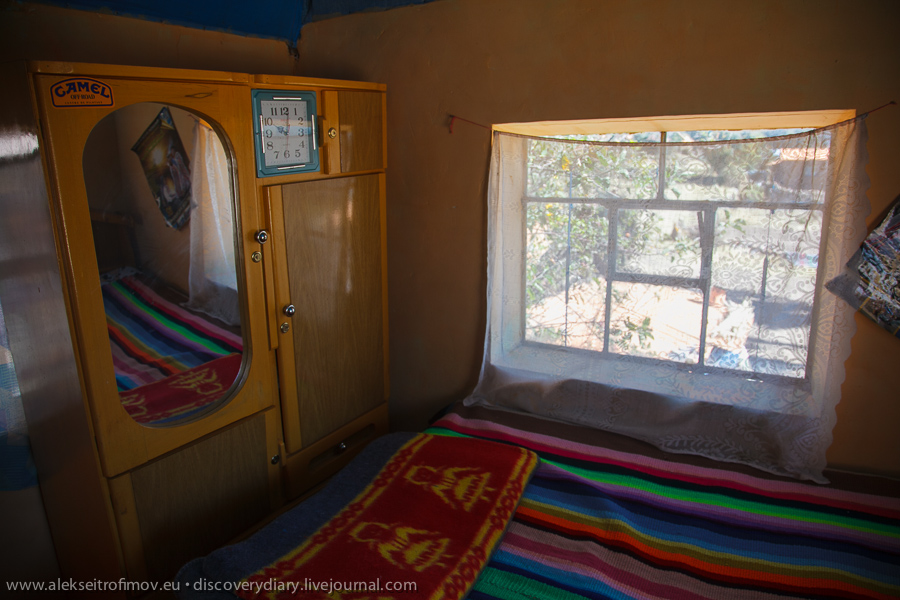 Ester prepared the lunch and dinner for the three of us (I happened to be distributed with two Danes). The lunch consisted of quinoa soup and roasted cheese with four sorts of potatoes. The family however did not share the lunch with us. Perhaps it was explained by a lack of a common language (the Danes did not speak Spanish, while the locals speak Quechua first and their Spanish may not be all that strong either). On the other hand, Ester was very interested in selling us her various woven products. I bought woolen socks, which served me well down the road. Esther is a single mother raising a daughter. They share the house with her mother, brother and five sisters. This is how she looks. She is 30. 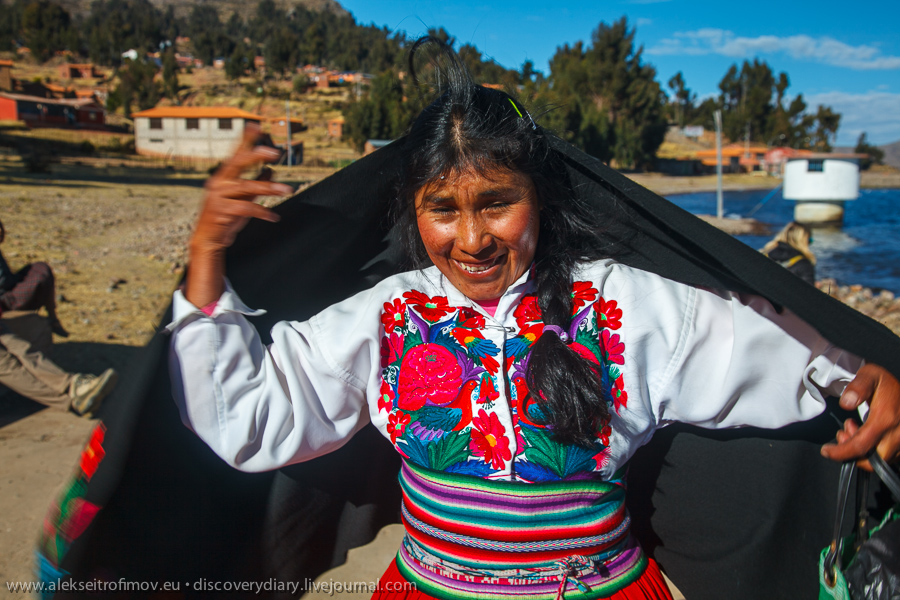 Long series of activities came next.

First all the male members of our group were invited to play football. I could not decline this challenge, although to be honest last time I played football was 17 years prior. But I felt I just had to try it on this altitude. Our team consisted of two 8-year olds, myself, an American guy and two locals. We were to play against six young Englishmen from another group. At first I didn’t even believe that seriously we would play in those teams. ¿Es una broma, no? But the match finished 4:2 in our favour. The locals in our team turned out to be an unfair advantage. At this altitude, playing football feels like tearing your lungs out. Not a joke at all.

Afterwards we were invited to a local school to conduct a lesson of English. Two teachers from our group explain how to pronounce “rooster”: 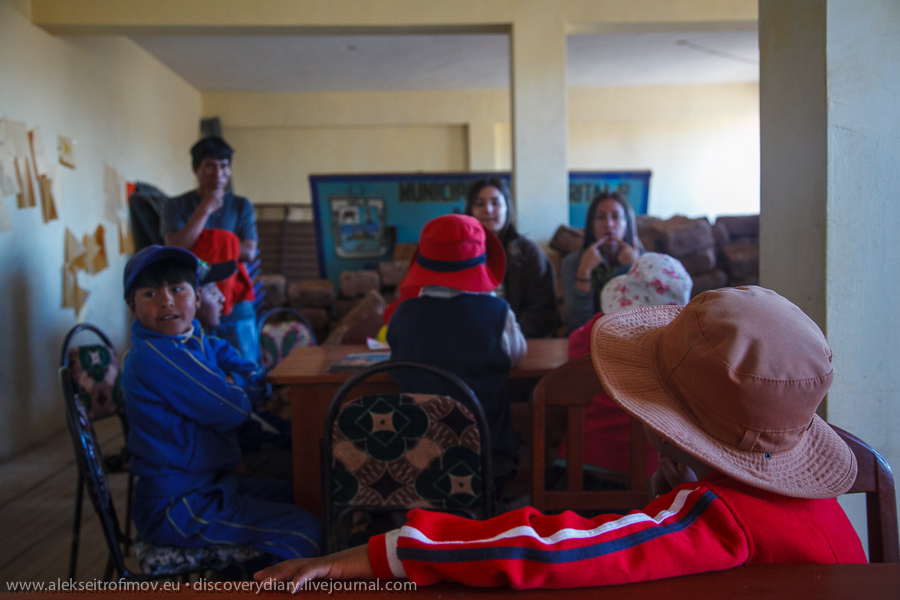 Afterwards we climbed further 200 metres up to see the Pachamama temple and the sunset. This climb felt quite superfluous after the football match. 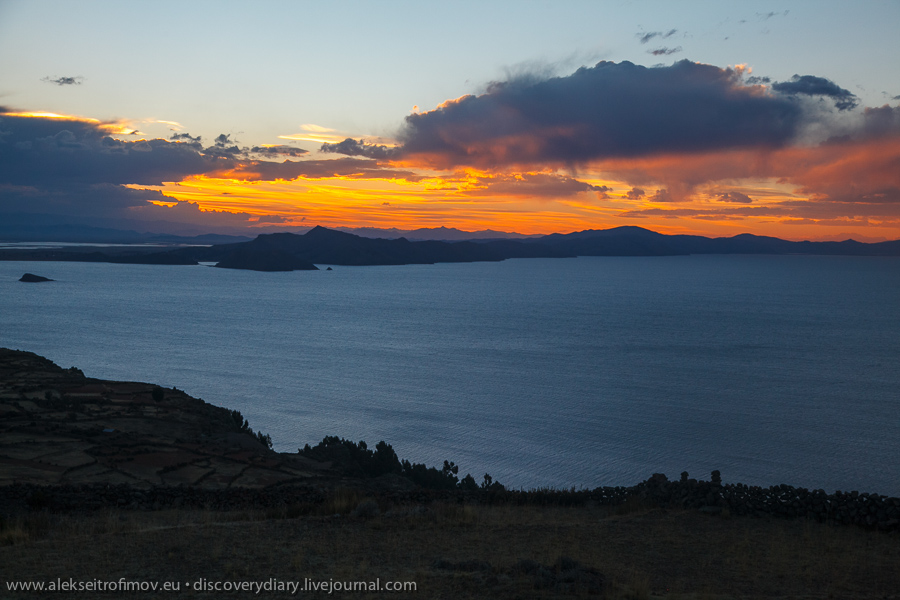 And finally the last point of the program, for which no photos are available, was a late night fiesta. All the tourists were dressed up by the host families in traditional clothes and led to a local club. Beer and coca cola were flowing and the band was playing traditional music. As this sort of a party does not happen every day in this community, there was real dancing, and even I had to play my part, as single males who dance were rather scarce out there. And even Ester relaxed a little.

Overall, a rather strange “ethnographic” experience. Of course it cannot be called “authentic” in the sense that it has nothing to do with the local life as it would be without tourists. And the lack of interest of the locals towards the tourists, with the exception of the commercial interest, feels slightly disillusioning. However this is the local life today, the interaction of a tourist and a local. Globalisation transforms different points of the planet and we provoke and then observe this transformation.

Next morning we went to another island, Taquile, which is bigger, closer to Puno and way more touristic. At midday on the main square the local dances were performed: 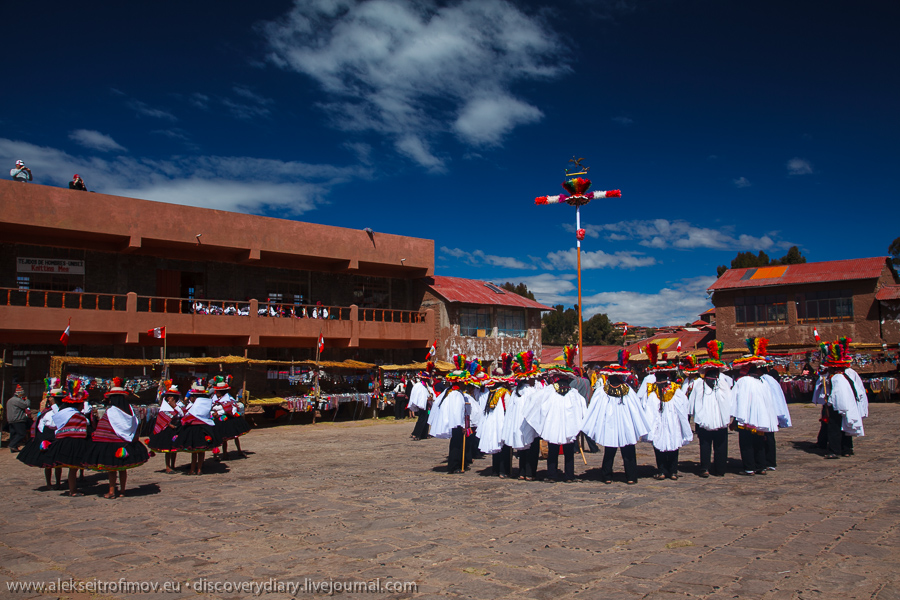 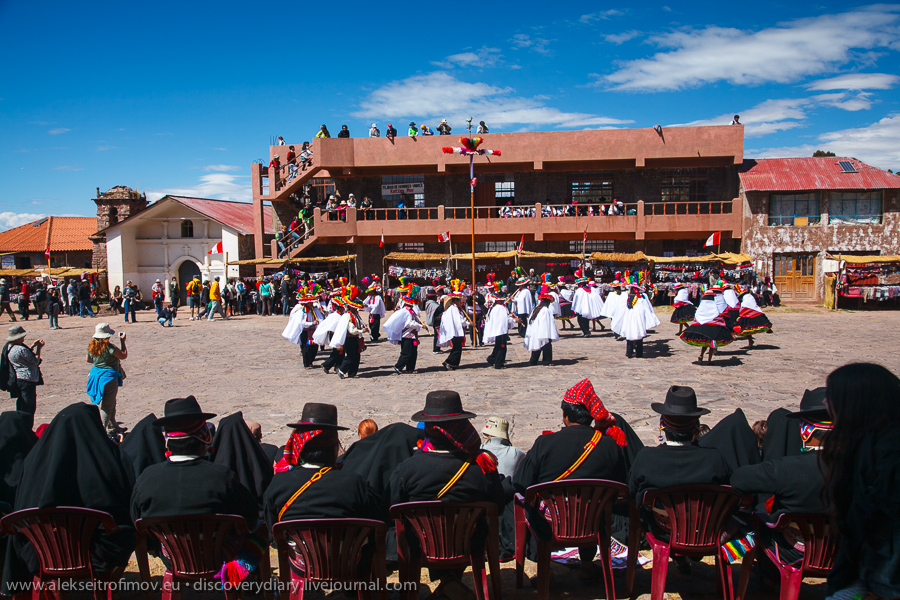 Demonstration of the local crafts: 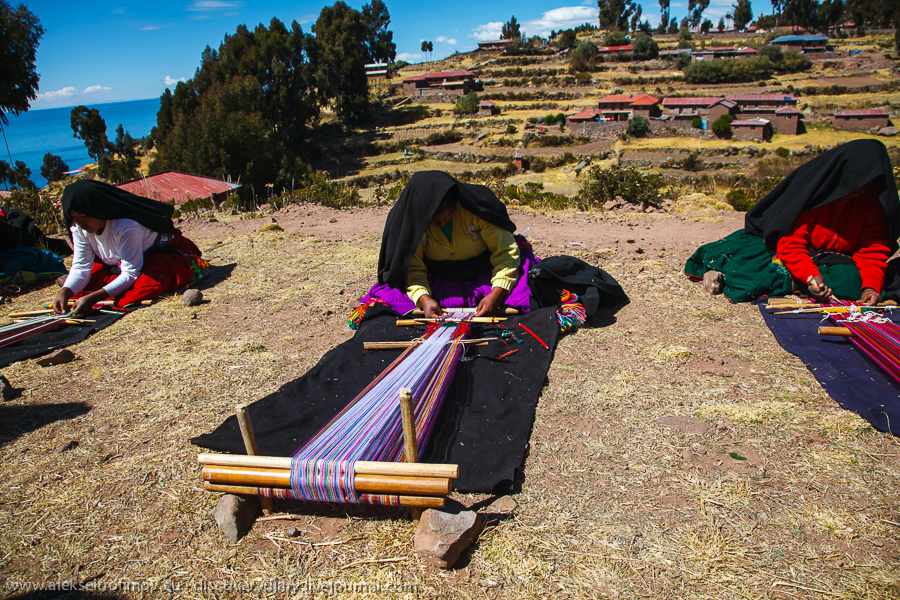 The men are wearing traditional hats: 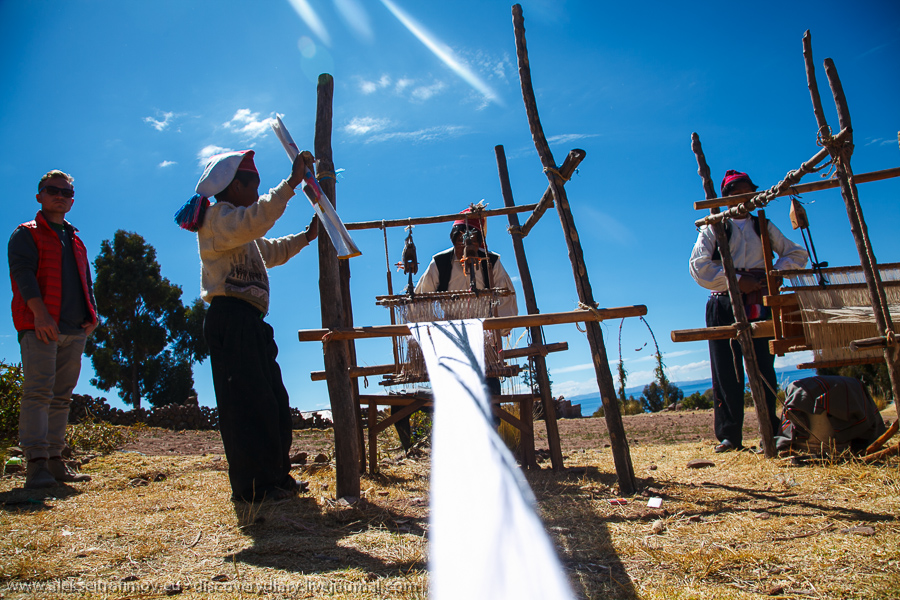 The hat with a white ending shows that the man is not married. Conversely, fully patterned cap corresponds to a married man. Although the island is very touristic, the locals live in communities and uphold many traditions, some of which were explained to us. Each community elects a leader every year, and that leader takes various important decisions, such as how to distribute the land between the families. The island way of life is not yet fully transformed by the capitalism – the private property for example continues to be a relative concept here. 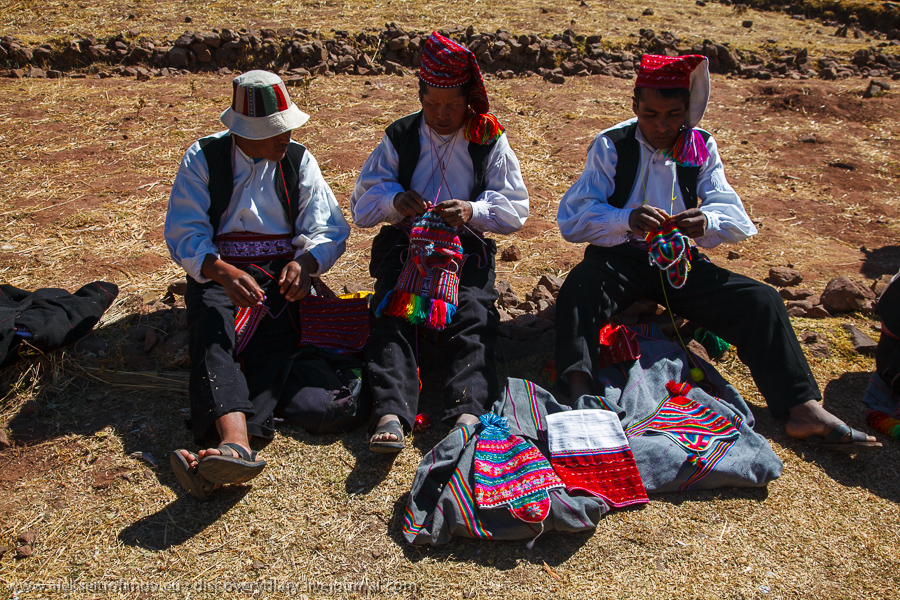 One thought on “The Islands of Lake Titicaca”