Legong and barong dance
On my very first night in Ubud I set off for the Royal palace which hosted a traditional legong barong dance. When I arrived about 10 minutes before the start, almost all the seats behind the starry sky were already taken, so I had to photograph over the heads of those sitting in front of me. Surprisingly there were quite a few local spectators too, in addition to tourists, though the locals were mostly watching from behind, probably as friends of performers.

The performance in the Royal palace consisted of two parts. The first part, legong dance, is based on a 13th century novel about a princess that is being abducted and then saved. All performers are young girls.

Anticipation of the start: 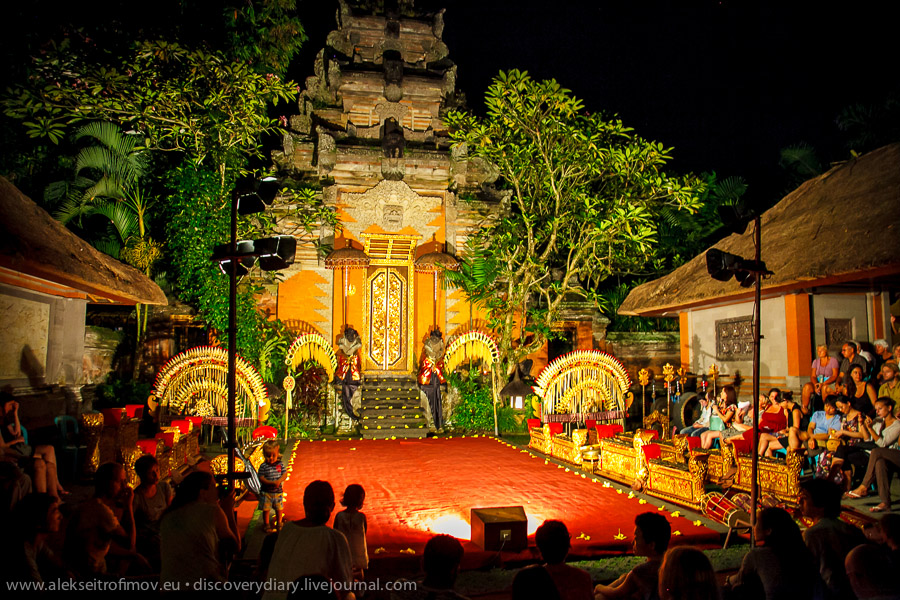 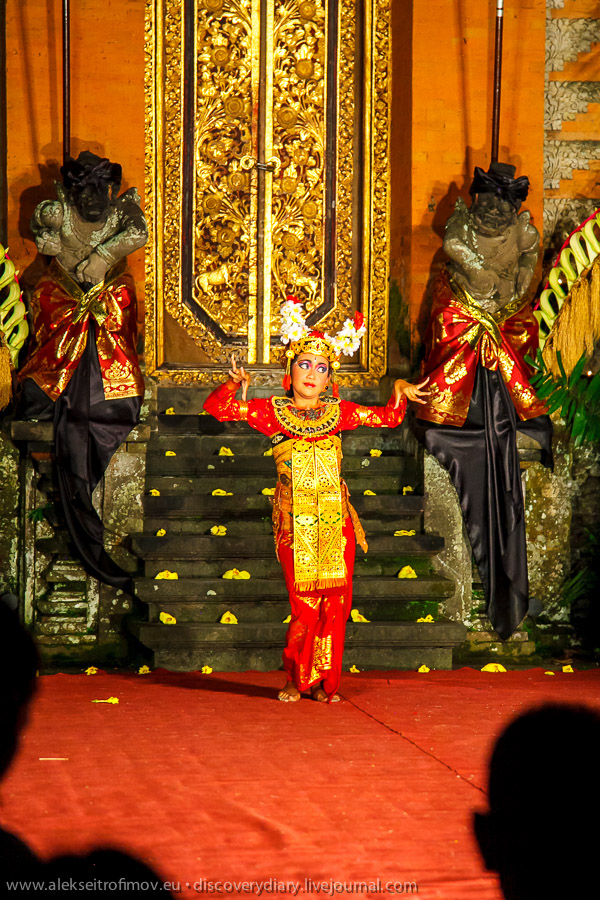 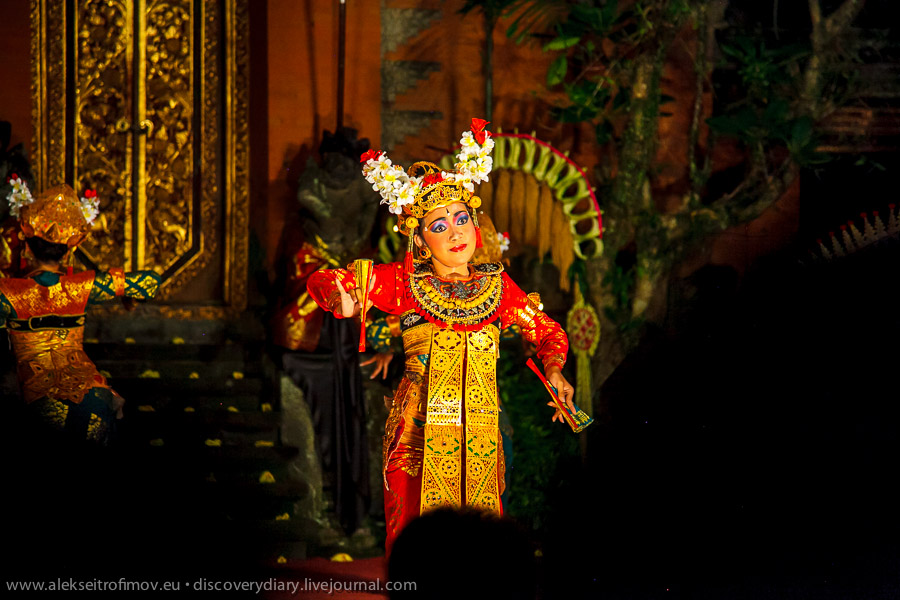 This lady was my favourite personage. For some reason she was always dancing right in front of me and was looking straight into my camera’s lens. I think she represented one of the evil princes-abductors. 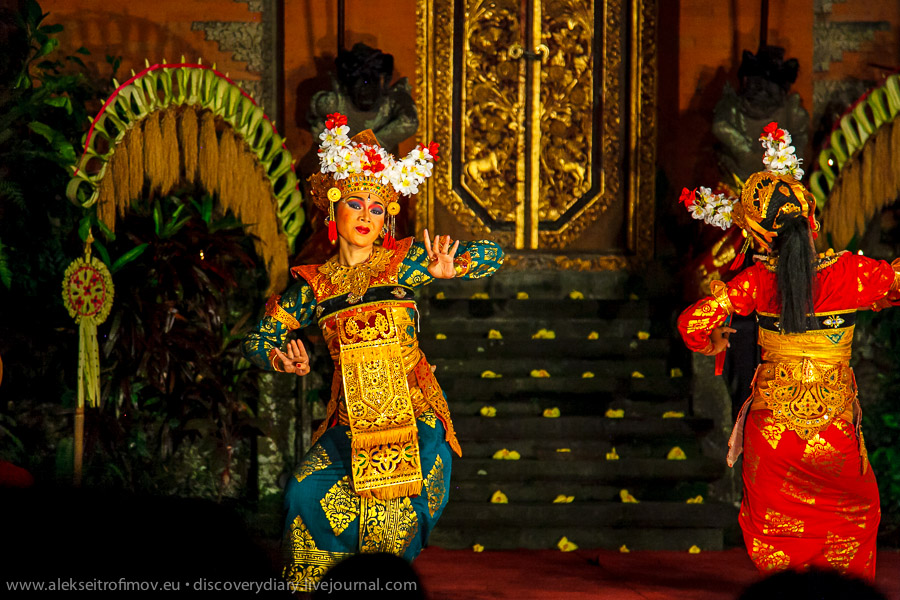 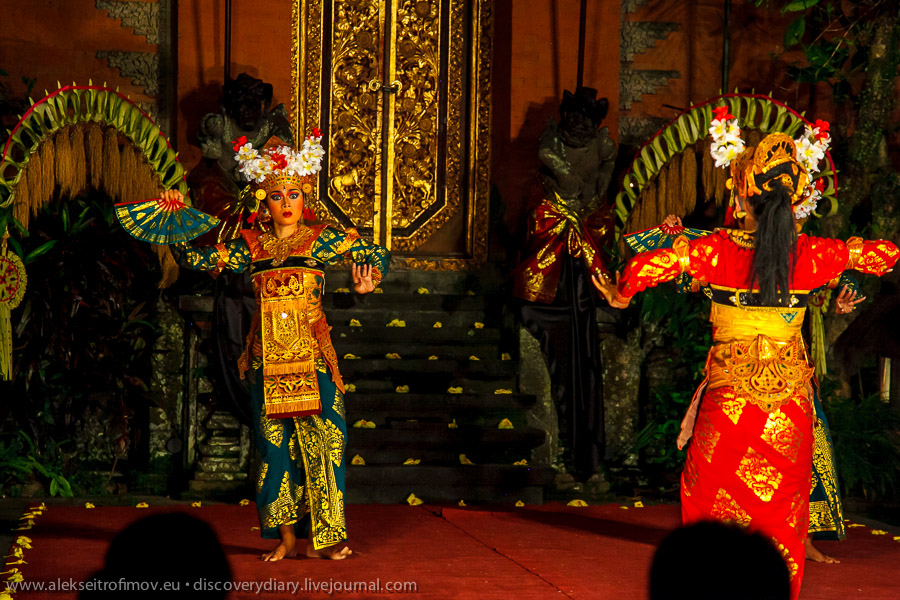 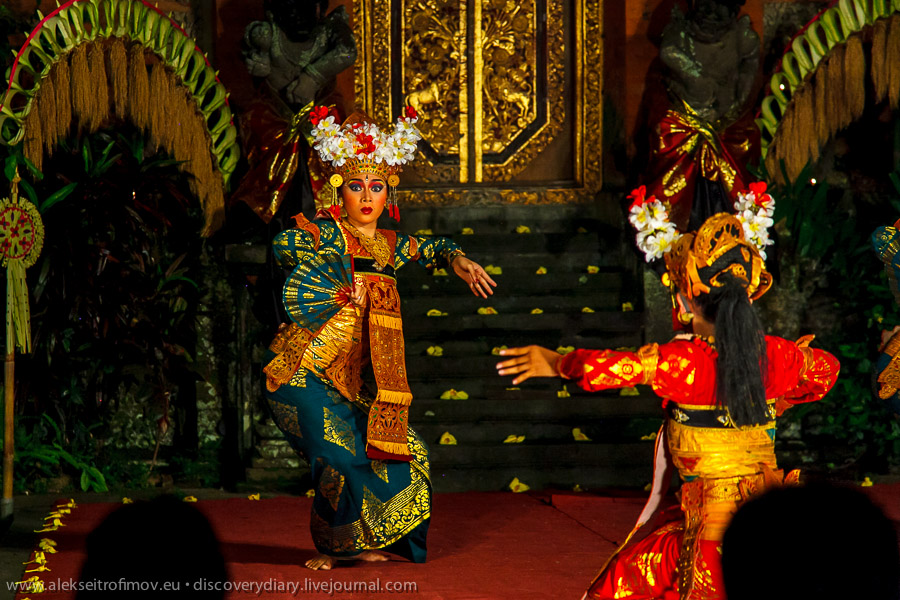 The second part of the performance is the barong dance. In my understanding it is based on the epic Mahabharata. Barong itself is a four-legged mythical beast, associated with the powers of the good, which is represented on stage by two persons – one holding his furry head, the other his legs. 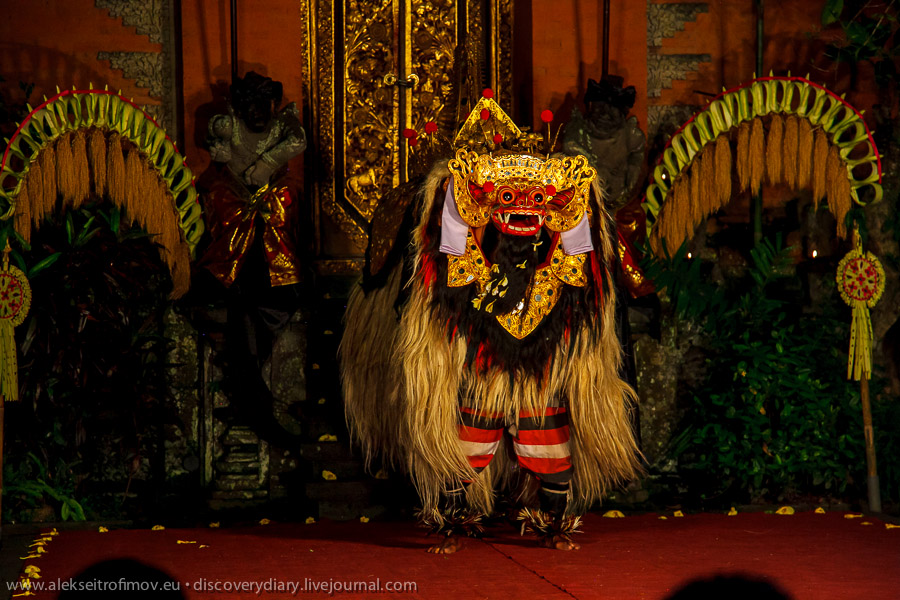 Barong engages in a discussion with the monkey king 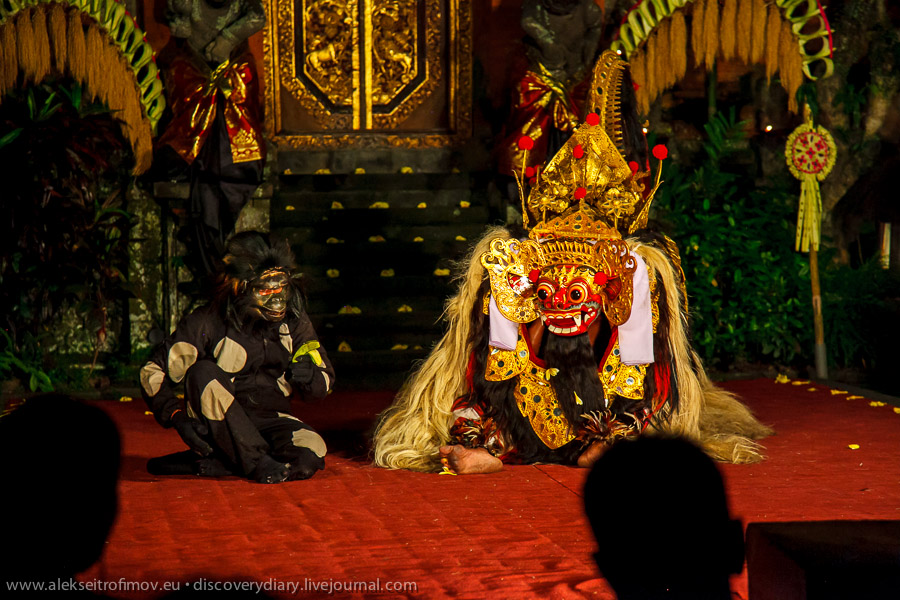 Picturesque giants, the assistants of the gods. 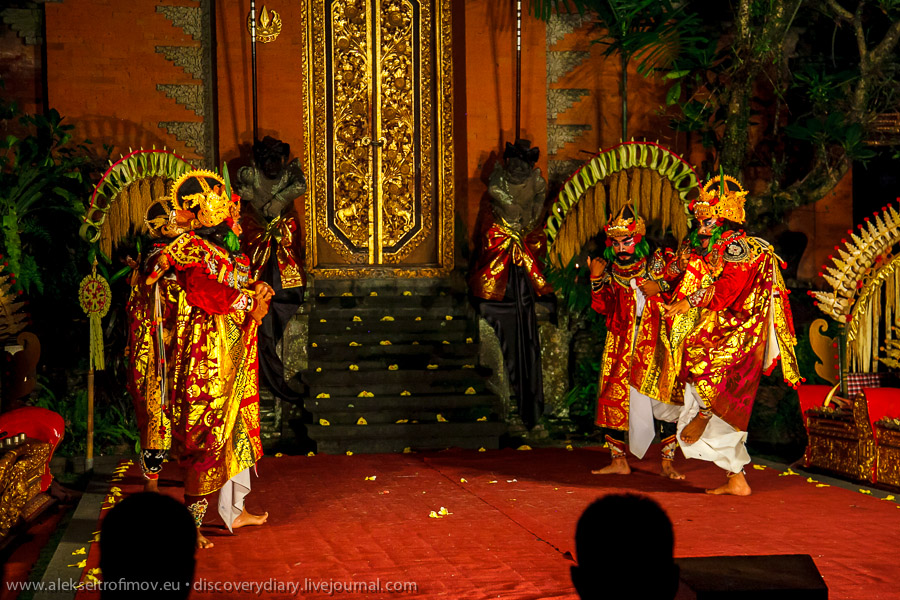 One of them is especially full of character. 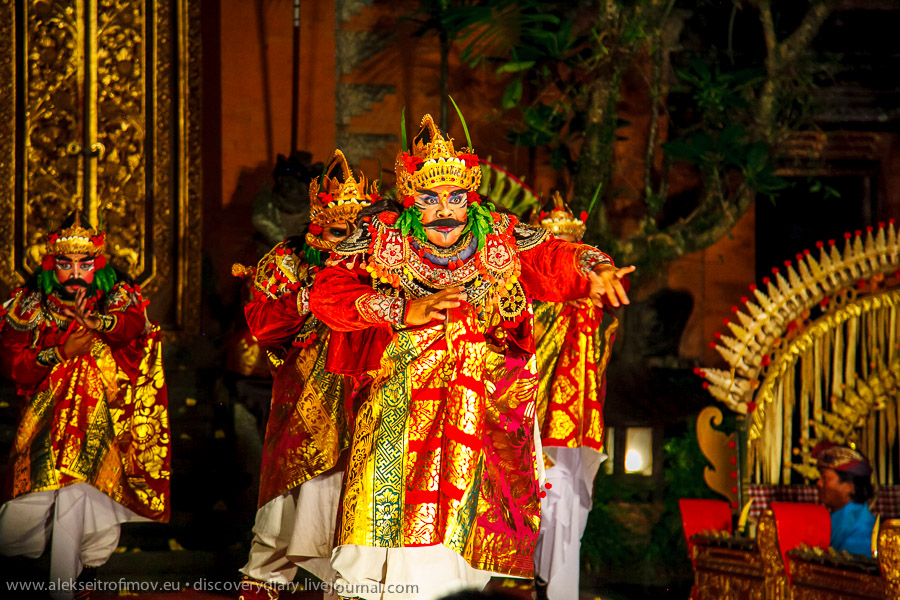 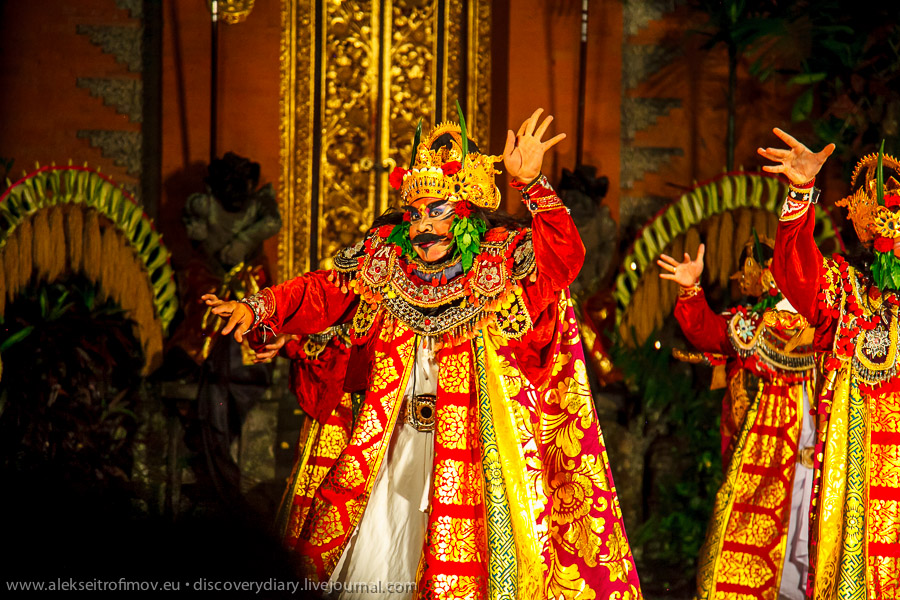 Here they are dealing with the road bandits 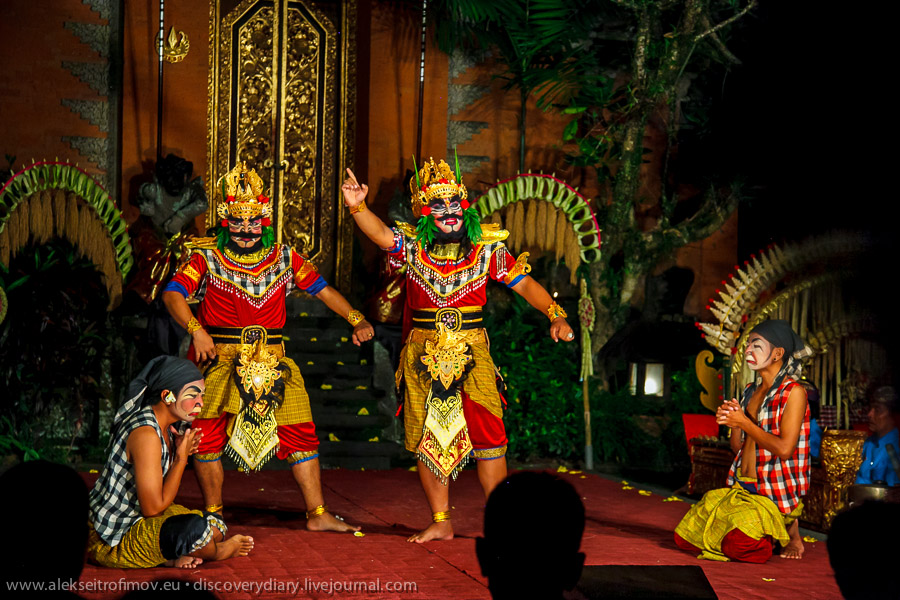 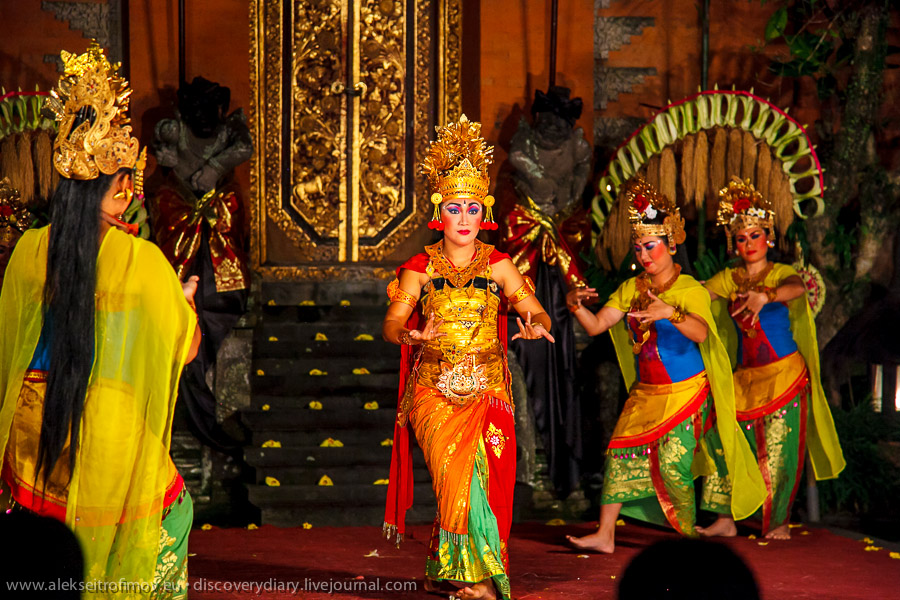 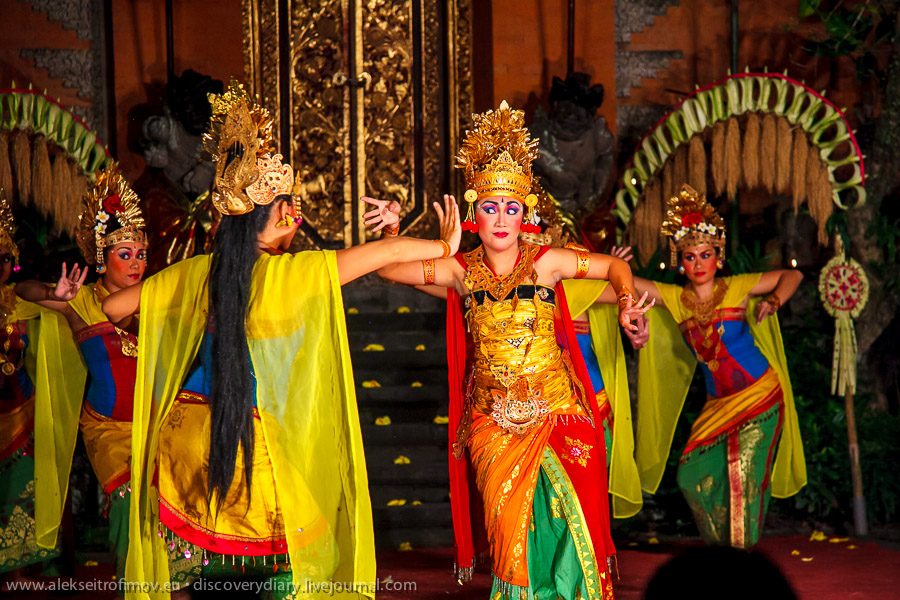 The concluding moment at the end of the performance. To my surprise, the leader of the group first thanked the audience in English, and then in Japanese! 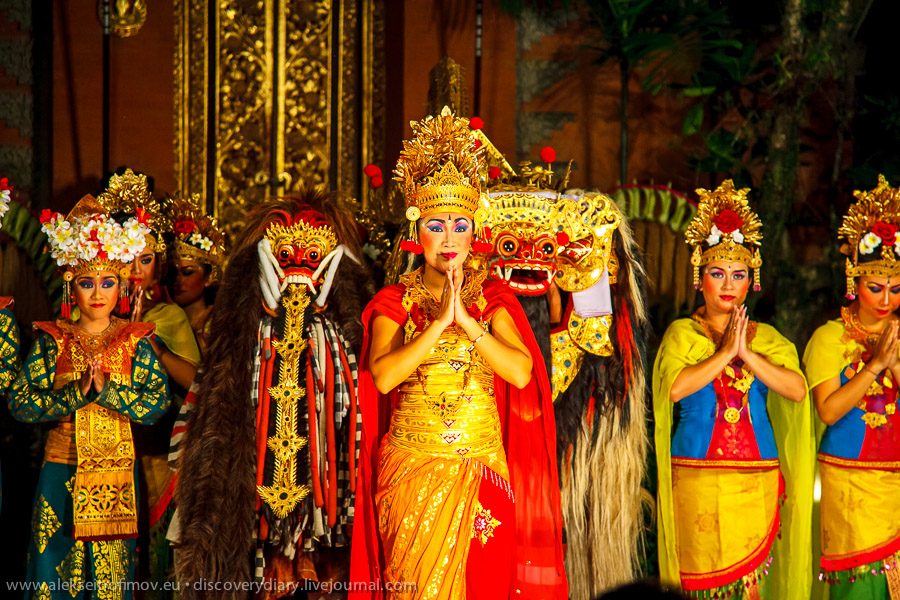 Afterwards they made a photo of the orchestra for some promotional reasons. You cannot see the orchestra on the previous photos as the musicians are sitting to the right and to the left of the stage. 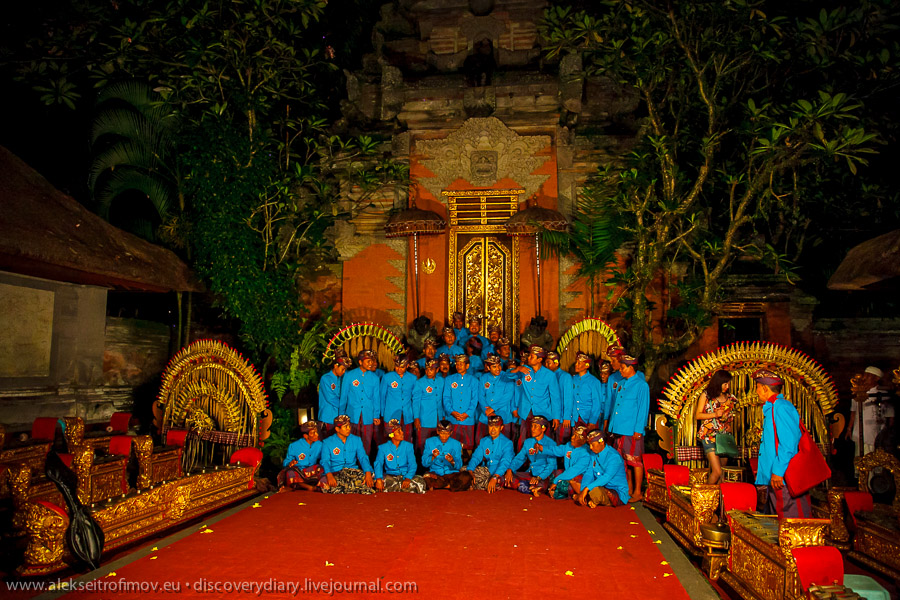 It was quite amusing to observe the light hearted jokes and attempts to restore order among the musicians. 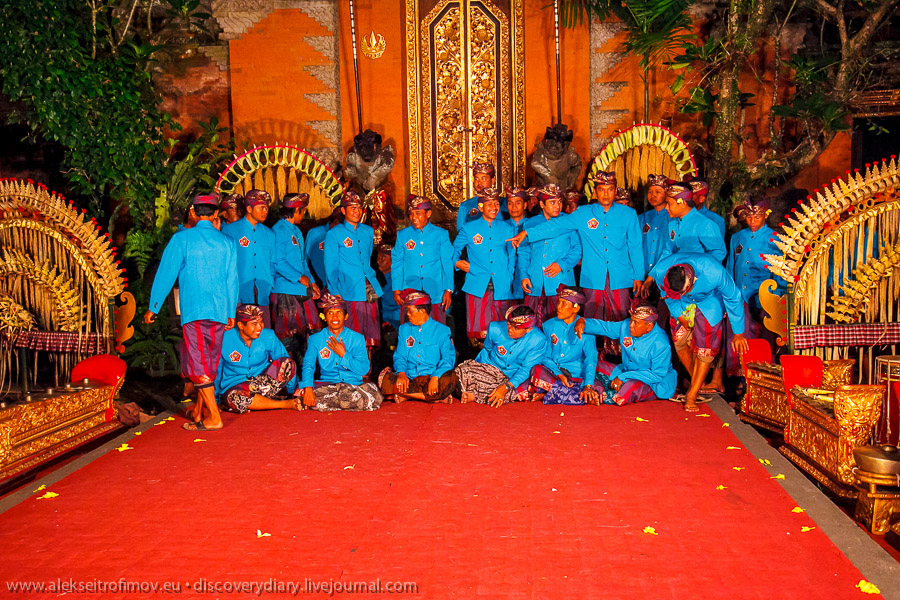 On another evening I attended the Kecak fire and trance dance. It was an altogether different performance. To start with it is staged by a group of relatives all living in the same village. The dance reminds of an eerie meditation. There is no music, all the sounds come from the voices of the performers. Suddenly they start singing, shouting, clapping, gesturing wildly… Fascinating. 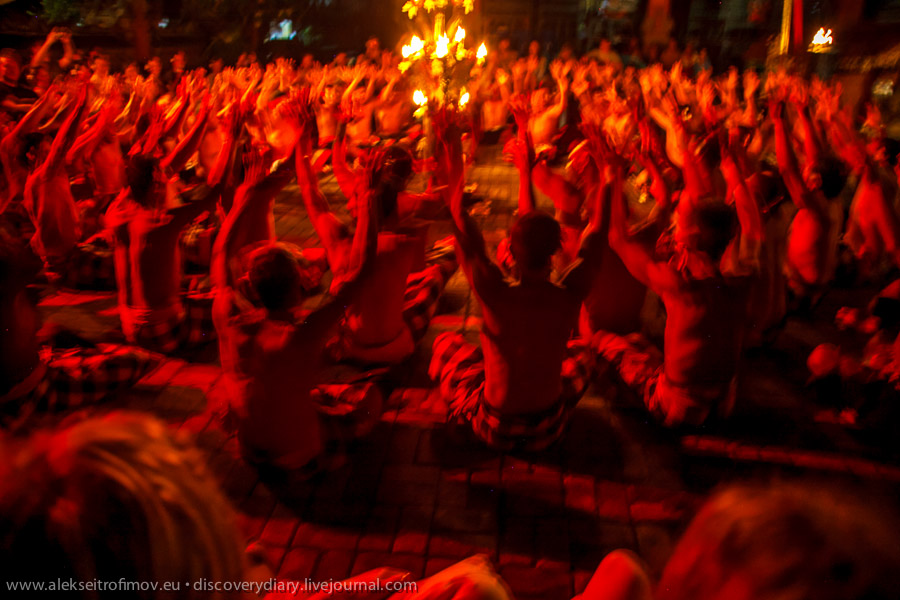 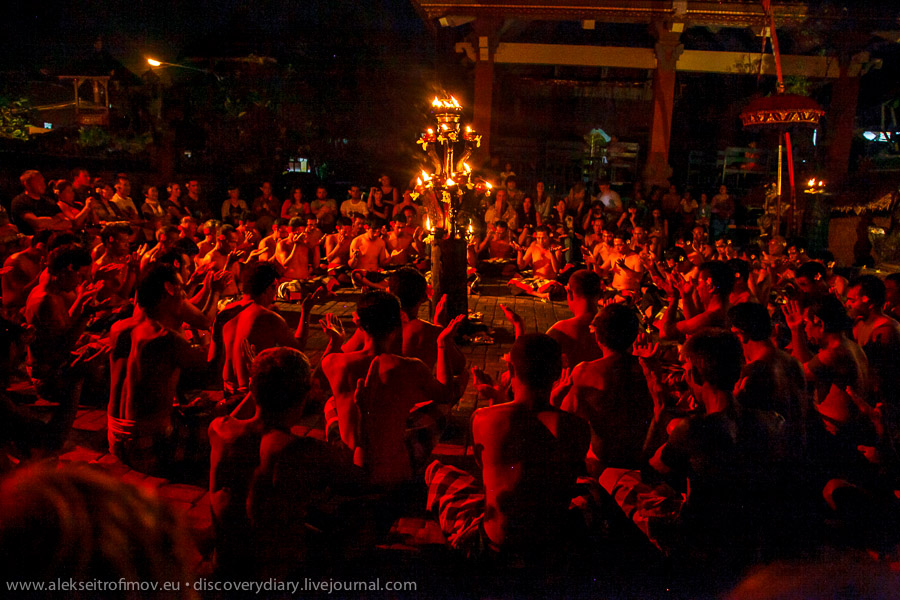 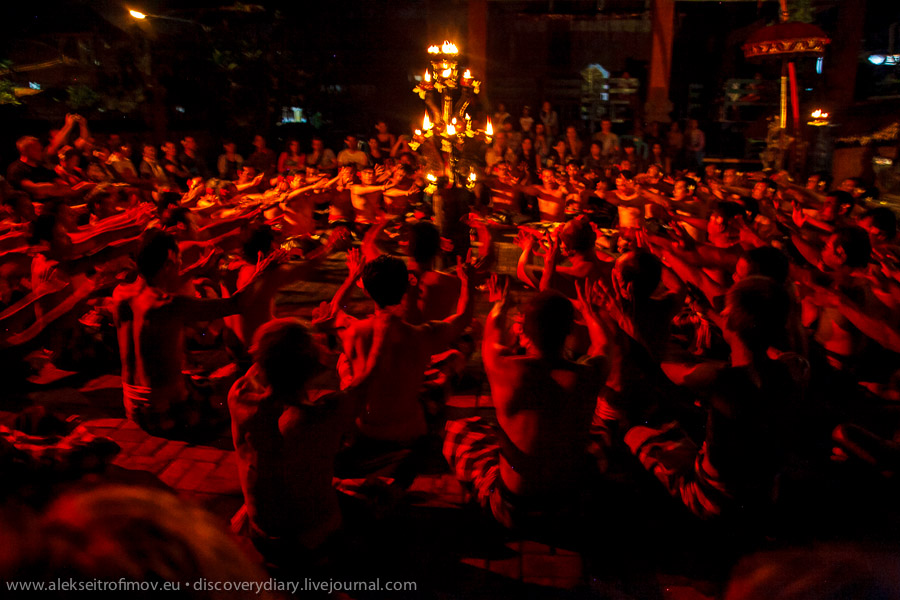 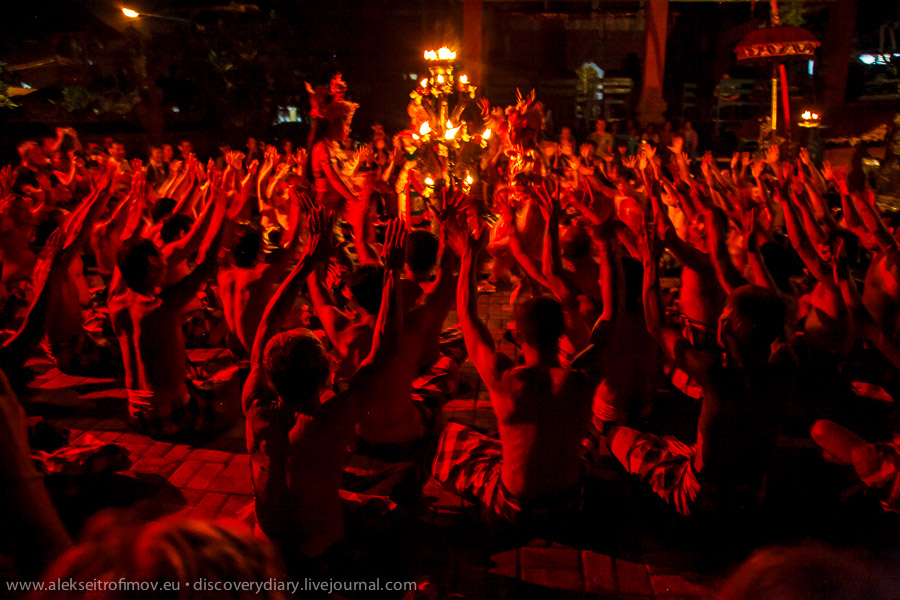 In fact they are representing fragments from the Ramayana epic. 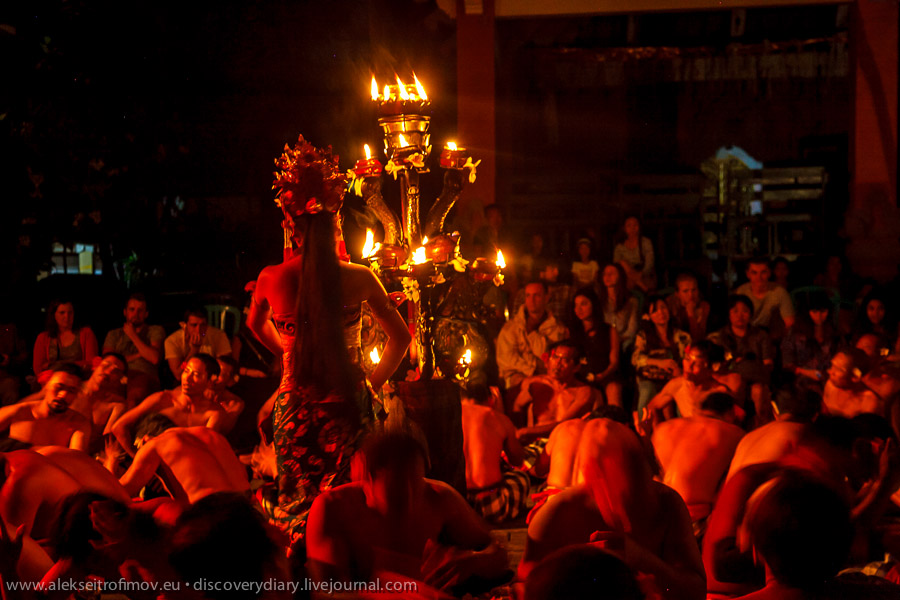 And therefore various colourful characters are appearing as the story progresses: an evil king hiding as an old man, wise king of monkeys Hanuman, prince Rama, his lover princess who is being abducted and so on.

In the last scene of the dance a mad looking dancer runs on burning coals. 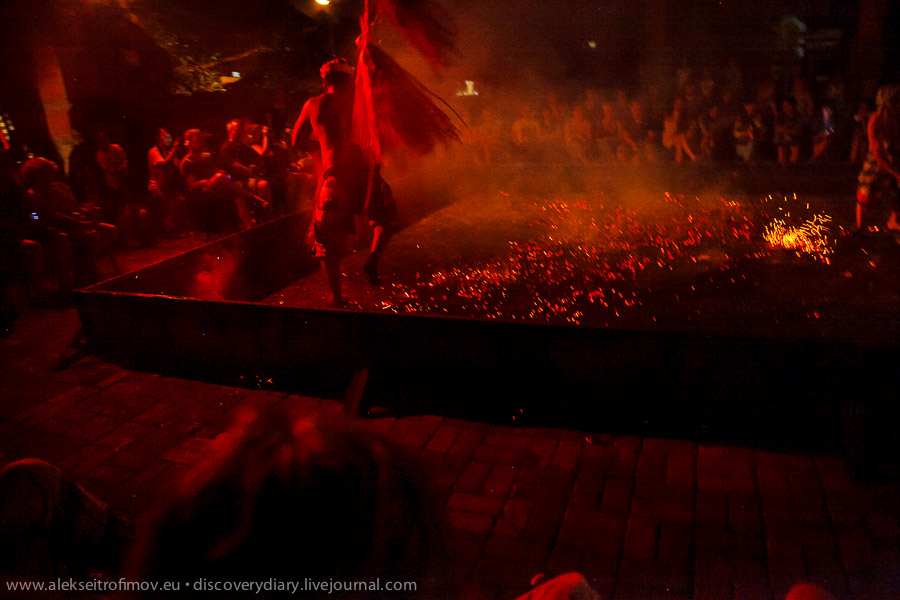 Once I saw women running on coals in Bulgaria. However on Bali the whole thing was rather more impressive – the guy seemed completely oblivious of the fact that he was walking on fire, he did it for long stretches and without any hesitation. 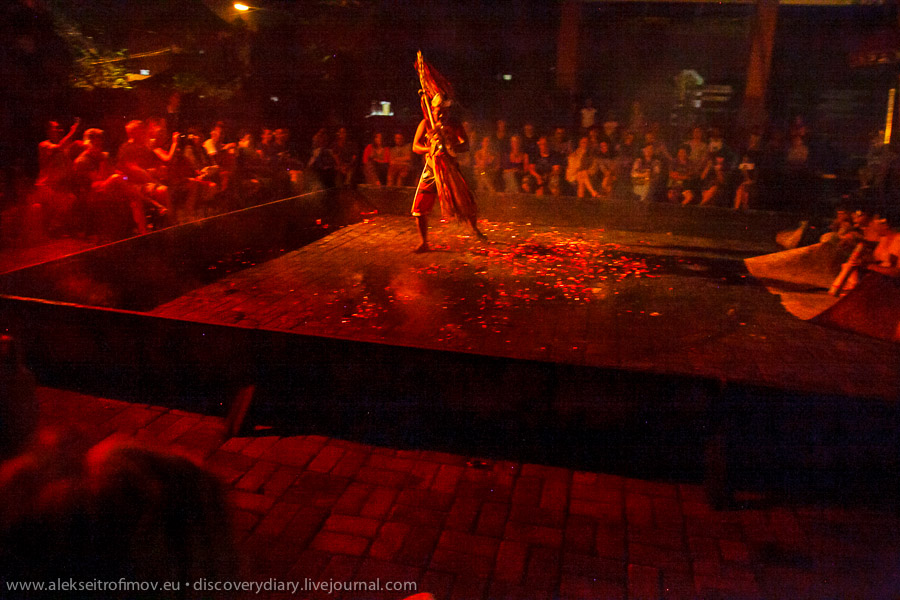 The end of the performance – a shaman sprinkles water on the performers. The burning coal dancer sits in the middle. 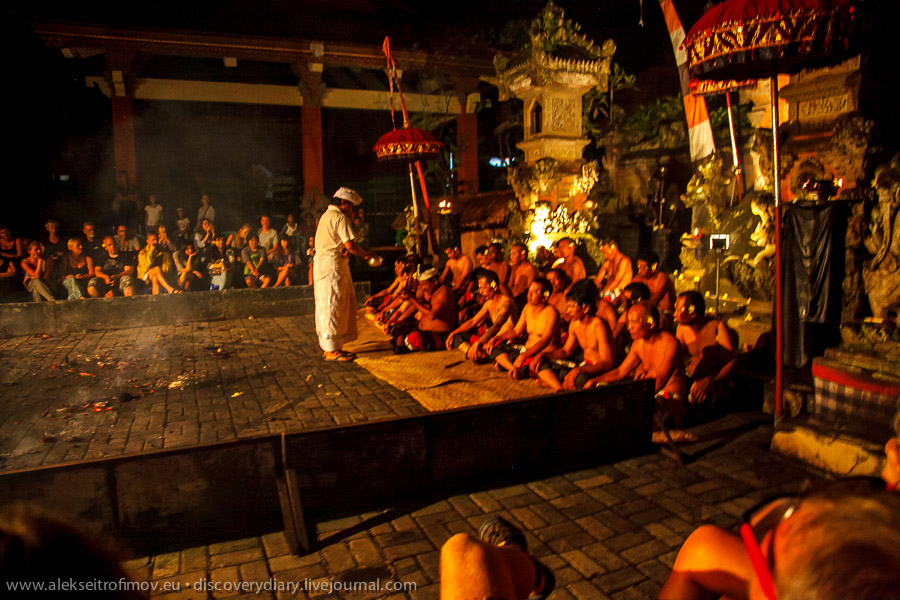 One thought on “Traditional dances of Bali”