For a while this blog will be a mixture of posts about New Zealand (where I am right now) and Indonesia and then Australia (where I was about a month ago). Right now I am in Taupo, New Zealand. The day before yesterday I skydived (what an experience!) and then yesterday I walked the Tongariro alpine crossing (also quite something). Thus today was a relaxing day to give my body and mind a little rest. In this post however I will come back to Indonesia, to my visit to Bali and the best place there for me – the town of Ubud.

The main touristic centre on Bali is the town of Kuta on the Southern tip of the island, right next to the international airport. Kuta gradually merges into Legian which merges into Seminyak which merges into Kerobokan – all these villages by now have grown together into one long township stretching along the coast to the North. I stayed for some days in Seminyak, the most upmarket of this line up. Then I became tired of the heat and moved to Ubud, which is located in the centre of the island at some altitude and is the cultural heart of the island. (Bali’s business and administrative capital and most populous town is actually another town, Denpasar, which I did not visit.)

Ubud is a magical place. Lost among the emerald green rice paddies, laid back and full of esoteric practices, it charms the visitor immediately despite its apparent superficiality. Its fame nowadays comes thanks to the movie “Eat Pray Love” and the book of the same name. The characters of the movie are real people, for example the healer old man visited by Julia Roberts in the movie can actually be visited. A friend of mine did pay him a visit and told me about it. Although the locals consider altogether different magicians the most powerful. I guess in Ubud everyone finds their own – either very superficial experiences, or something more interesting.

At first I expected to spend just a couple of days in Ubud, but days quickly grew into weeks and finally I was there for about two weeks. I attended yoga classes, various meditation workshops, ayurvedic procedures. Basically I was discovering a new sphere of life experience.

To give a first taste, a notice board in one of Ubud’s many fashionable cafés. Full of activities of every imaginable variety: 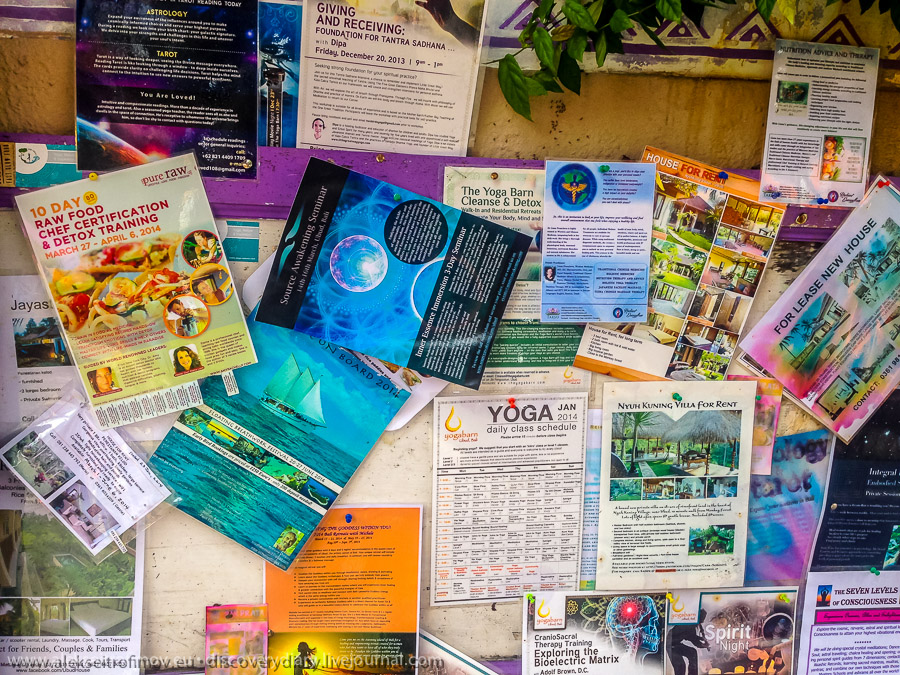 Yoga Barn is one of the most pleasant centres for yoga and related practices. Its inner courtyard: 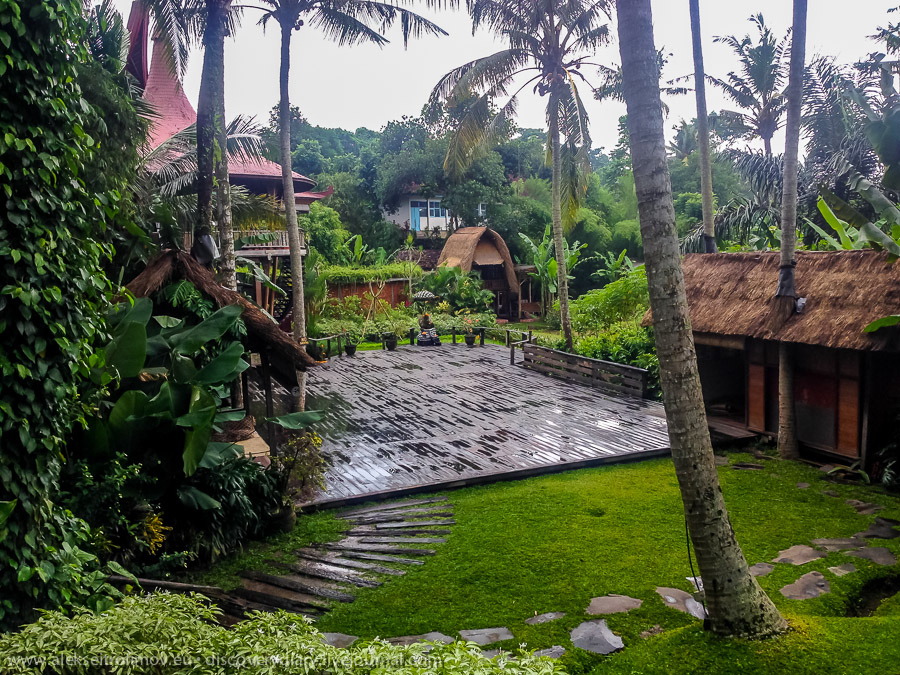 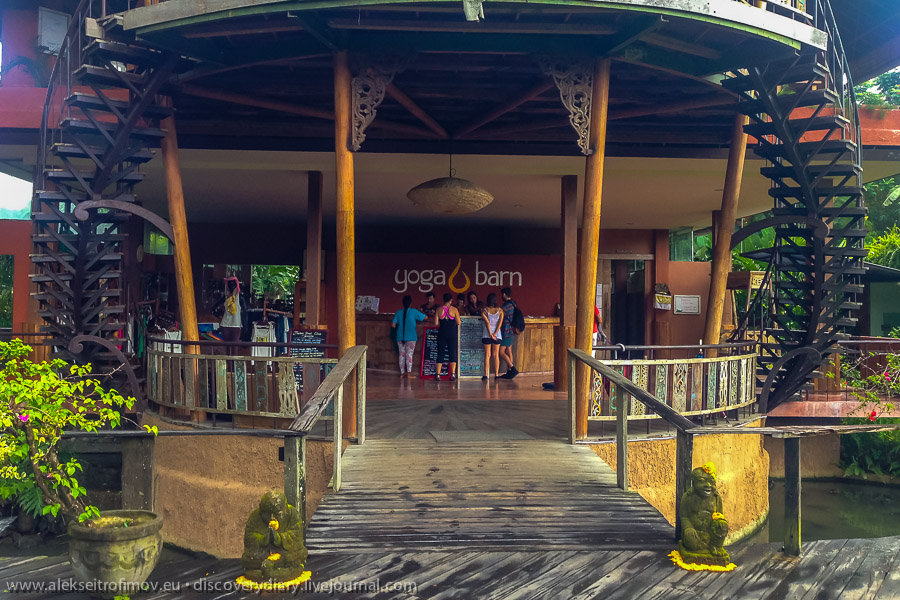 After the yoga class: 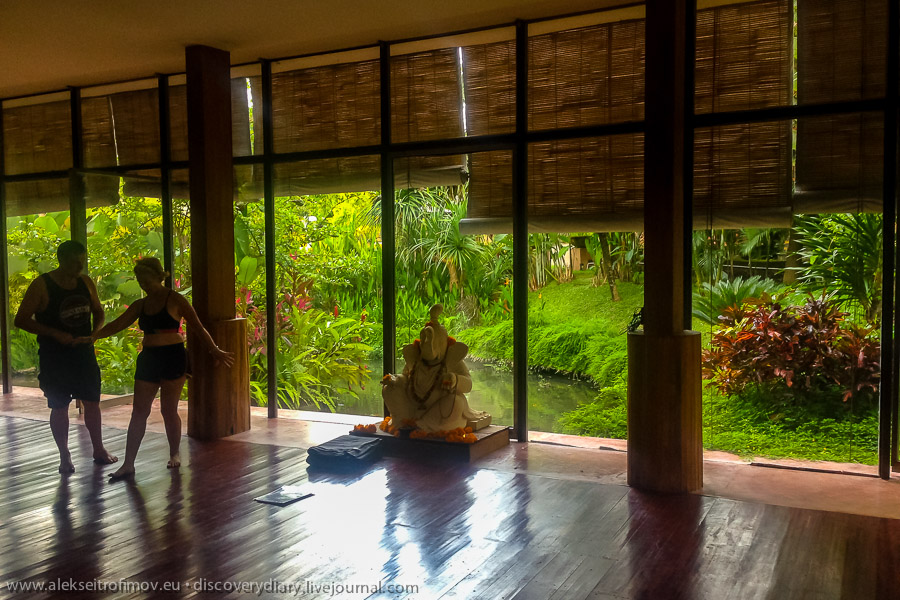 Ubud is a place of constant religious activity. It is full of temples where ceremonies take place all the time. 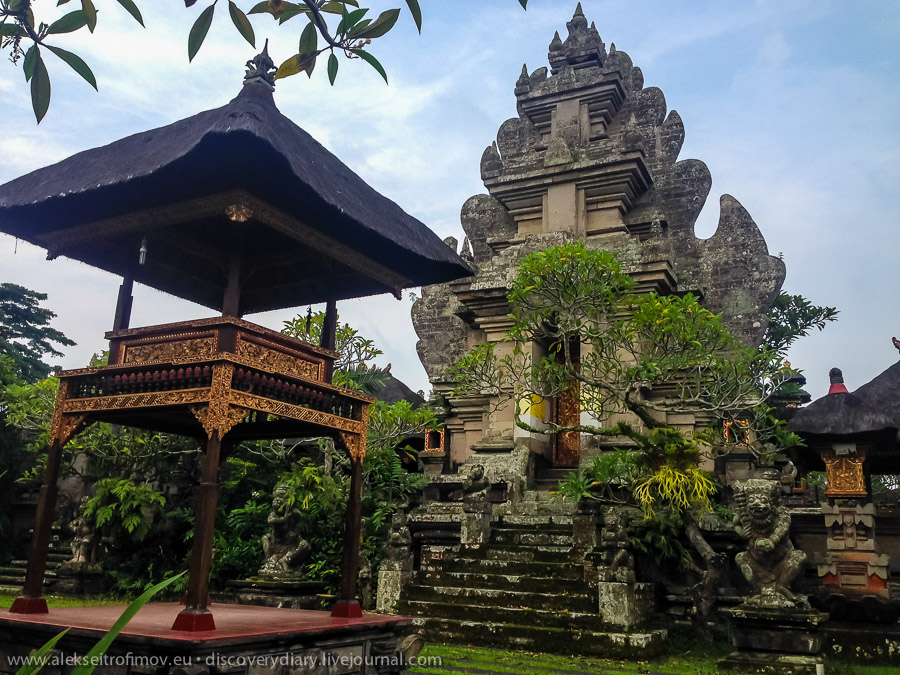 At any moment you can come across a religious procession on a street: 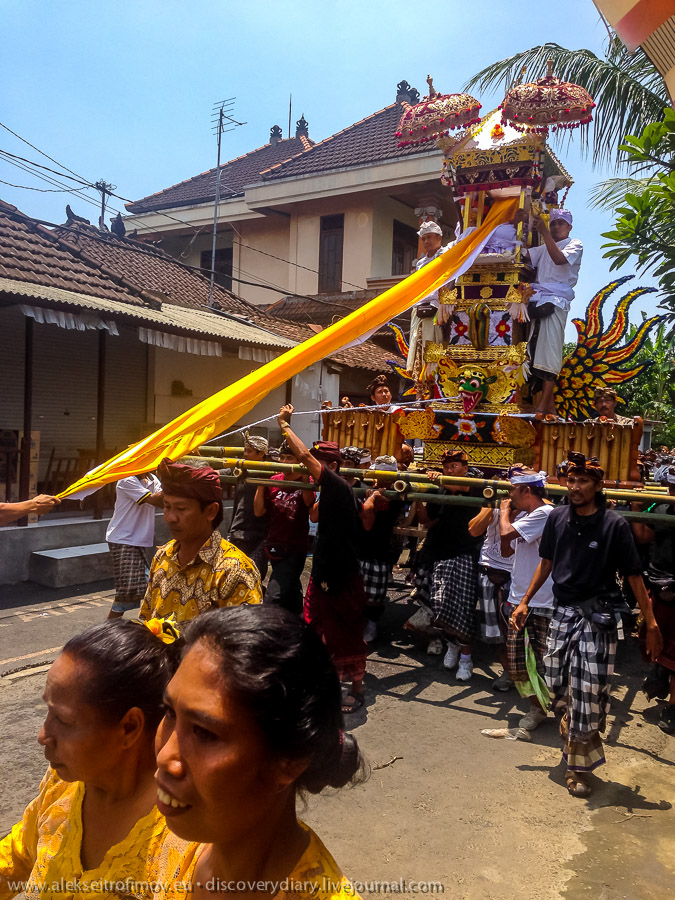 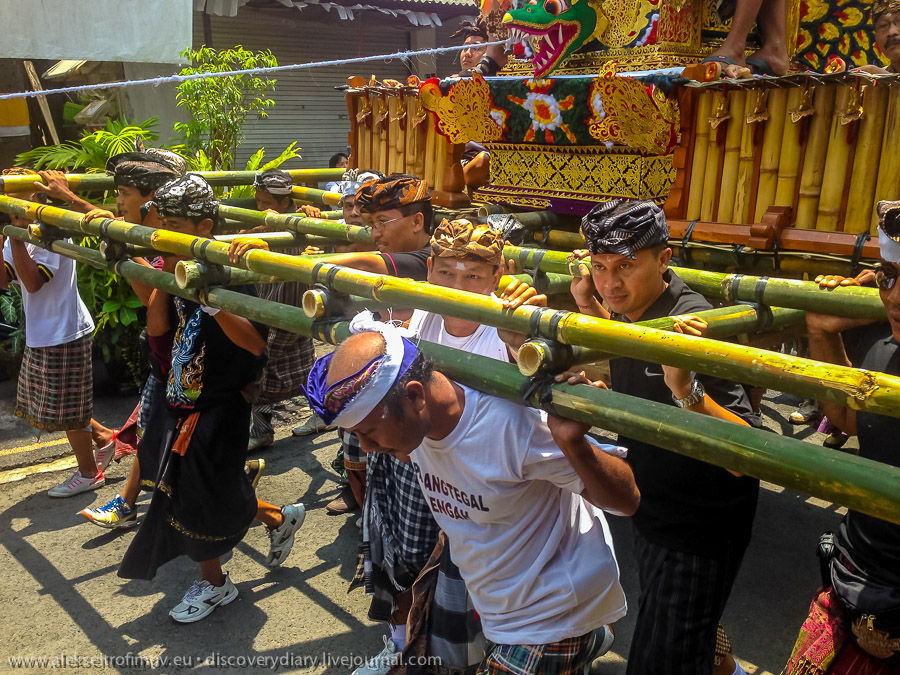 Temples are numerous but it is not so easy to visit one. At the very least you have to wear a traditional dress. One of the most picturesque temples is the temple of Saraswati. A bridge leads to it through the pond: 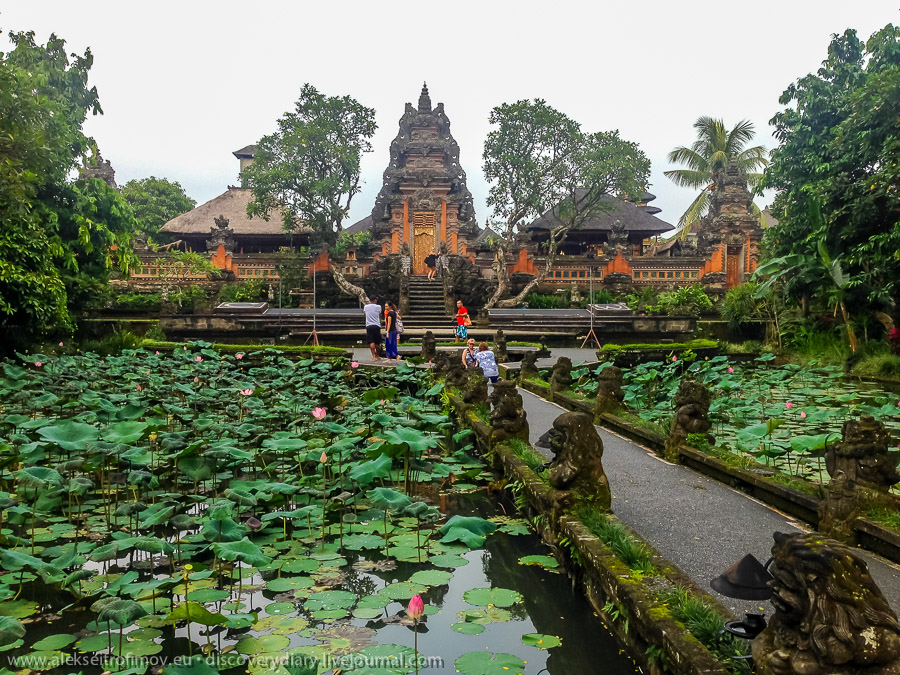 I came to Ubud before sunset, and one of the very first things I saw was this rice field right on the street leading to my hotel – literally 100 metres from it. It was a sudden moment of freshness in the heavy Balinese heat: 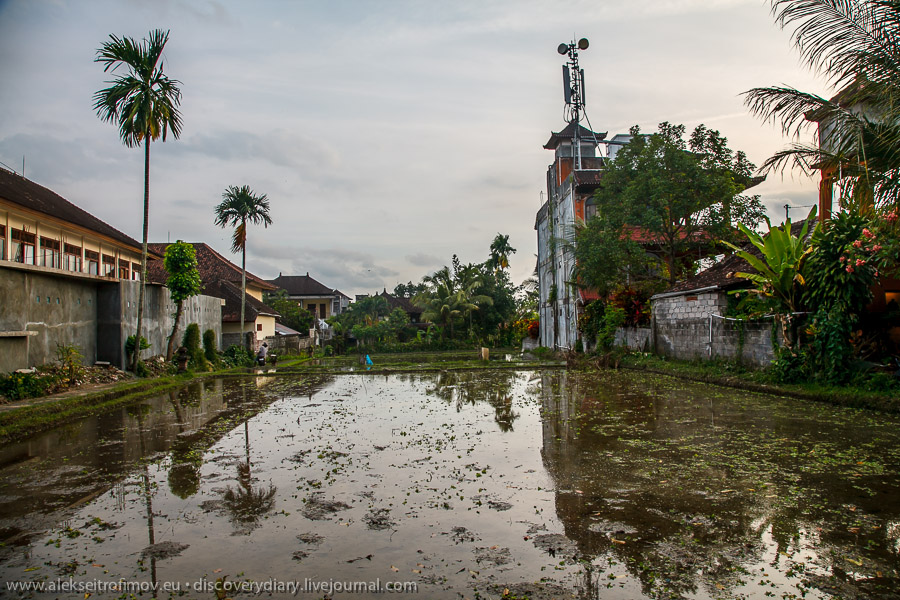 My hotel is right there on the staircase. 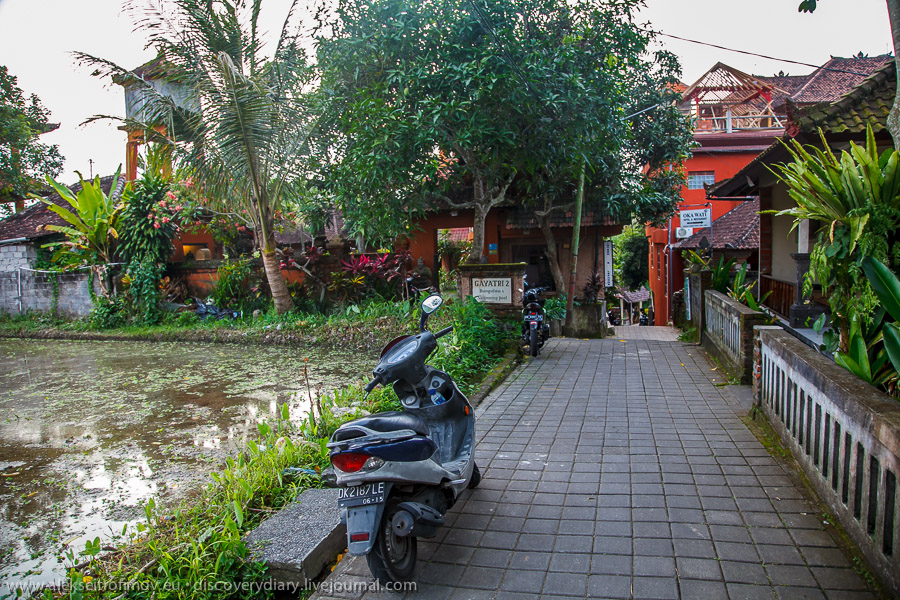 On the same evening: the main crossroads in the centre of Ubud. On one corner is the Royal palace, on the other – the main market, on the third – the tourist information, and a meeting place on the fourth. 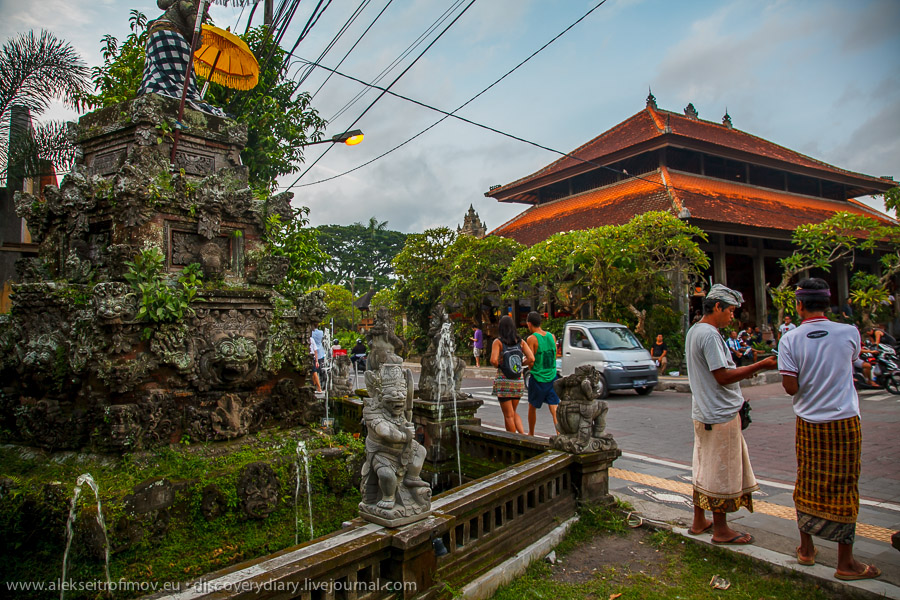 The main museum in Ubud. Four galleries with paintings and statues surround this pond: 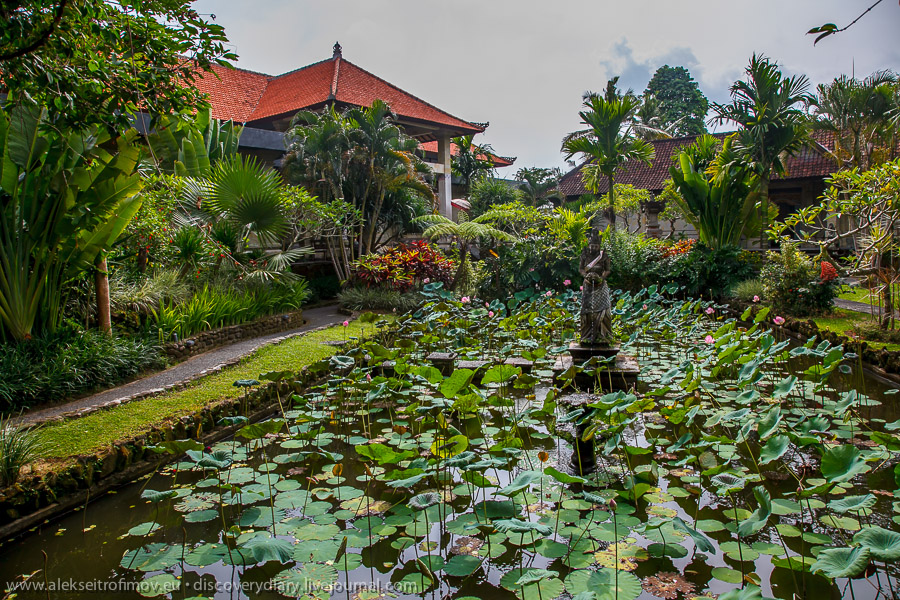 A characteristic painting by a local painter, depicting inevitable a scene from the Ramayana epic played out as a traditional Balinese dance. The traditional dance performances are staged every night in all corners of Ubud. I will describe some of them in my next post. 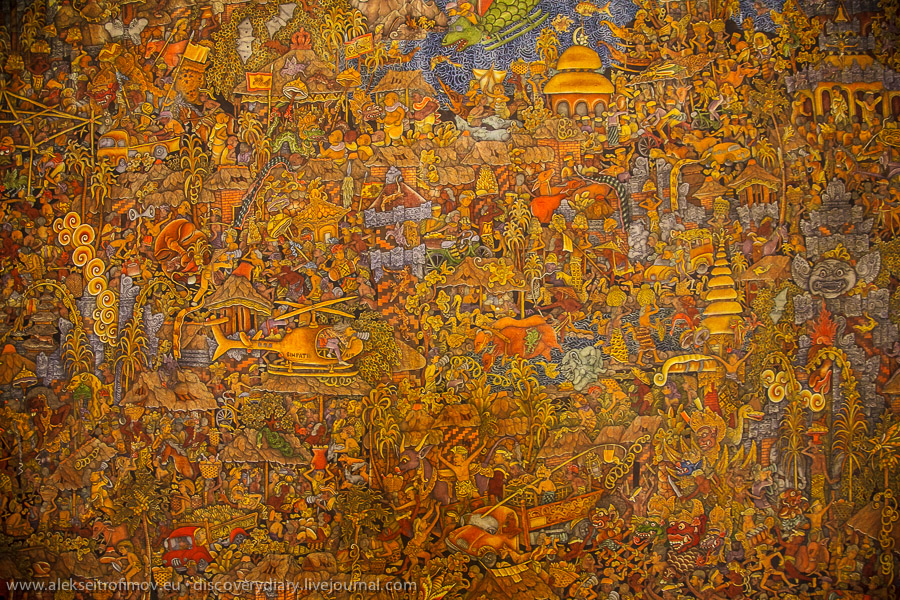 The Royal palace as such is closed to visitors, but you can visit the first two courtyards. This is the main courtyards where dance performances take place at night. 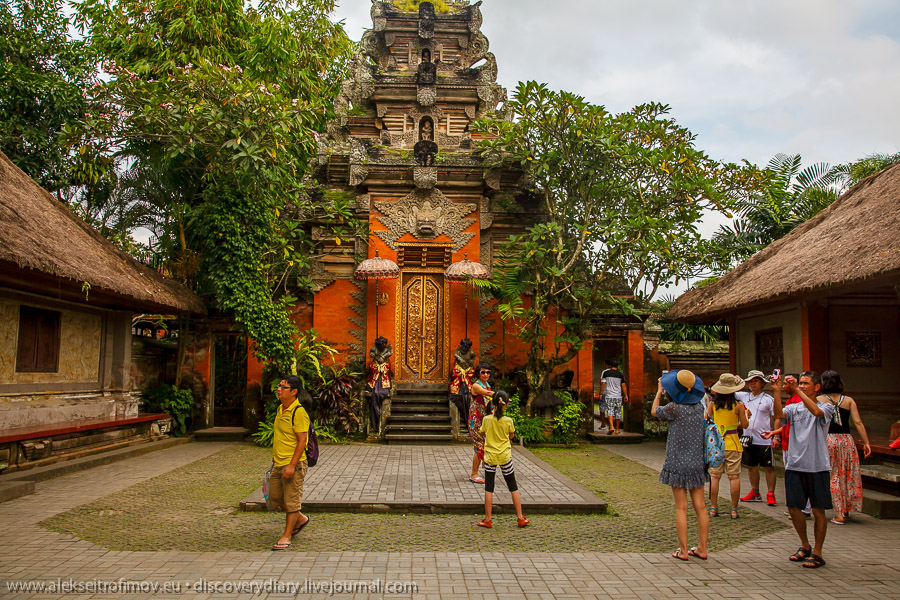 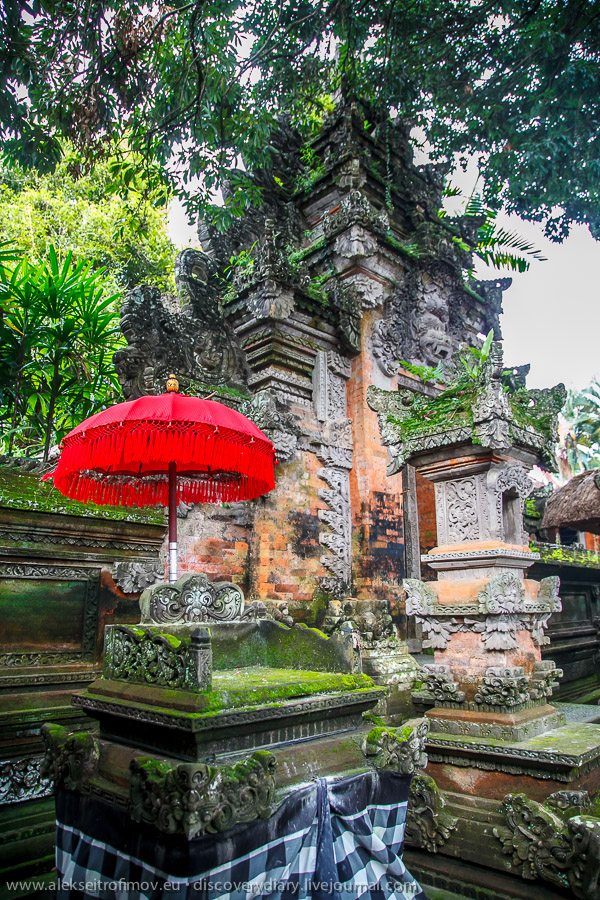 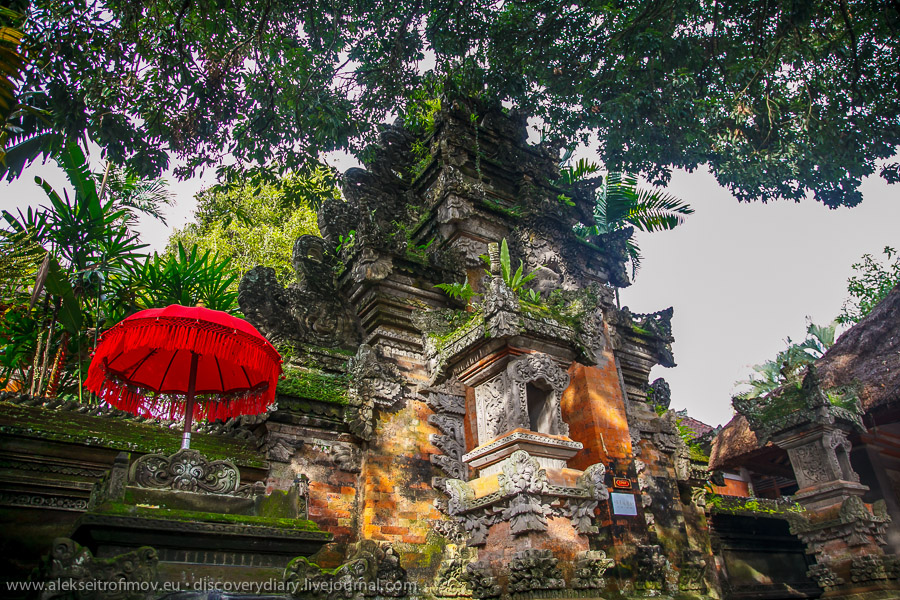 The entrance to the closed royal rooms. The king still reigns and possesses certain powers and privileges. 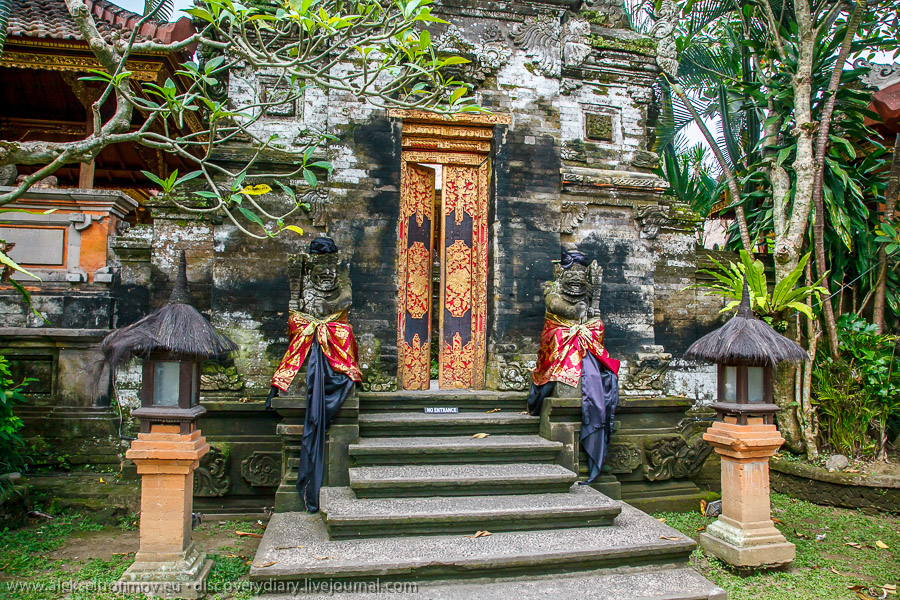 The statues are also dressed up in Balinese costumes. You see that all over Bali. It is considered that the deity is inside the statue and therefore it is equivalent to a living being. 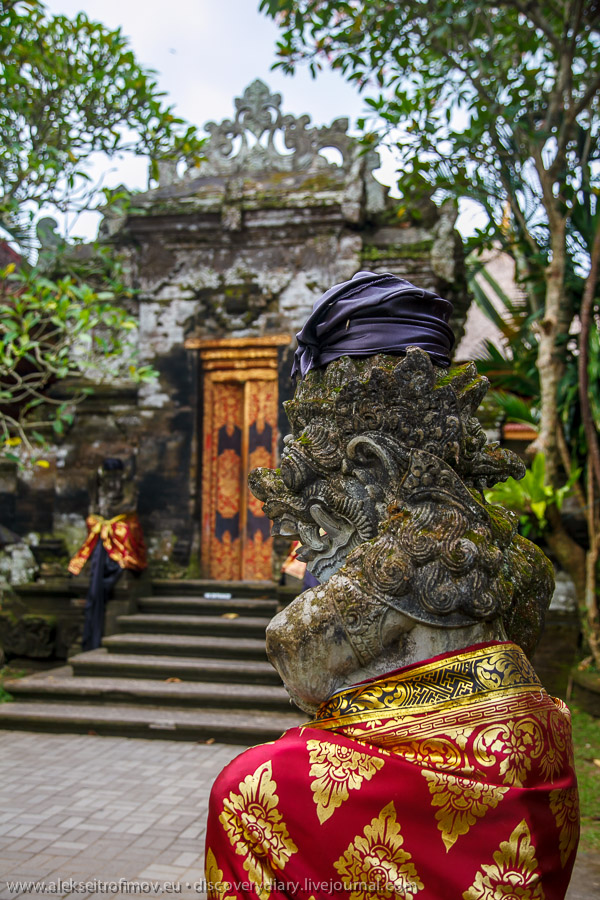 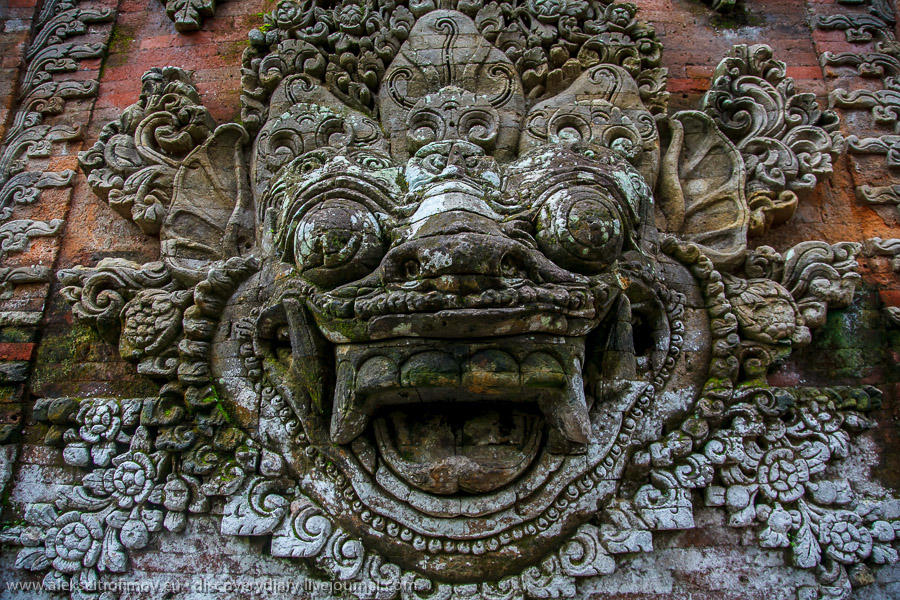 Some more fleeting Ubud moments. Not far from the Royal palace there is this huge football field. You pass it many times a day, walking from your hotel to Yoga Barn or to a café or to a shop. A large green field smack in the centre of the town full of shouting schoolchildren – a very pleasant diversion. 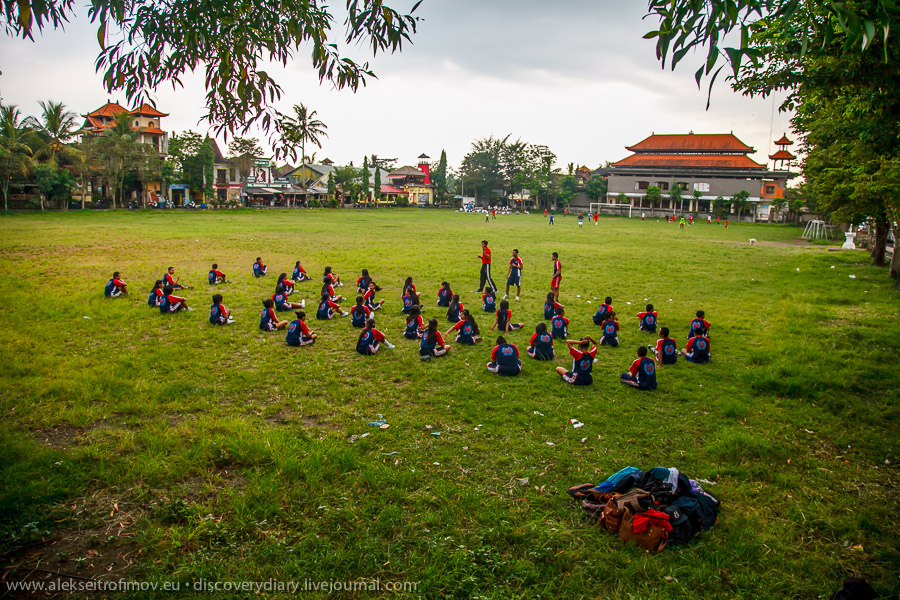 From time to time a sudden tropical rain crushes onto Ubud – it was the rain season after all. But it passes just as suddenly as it came. 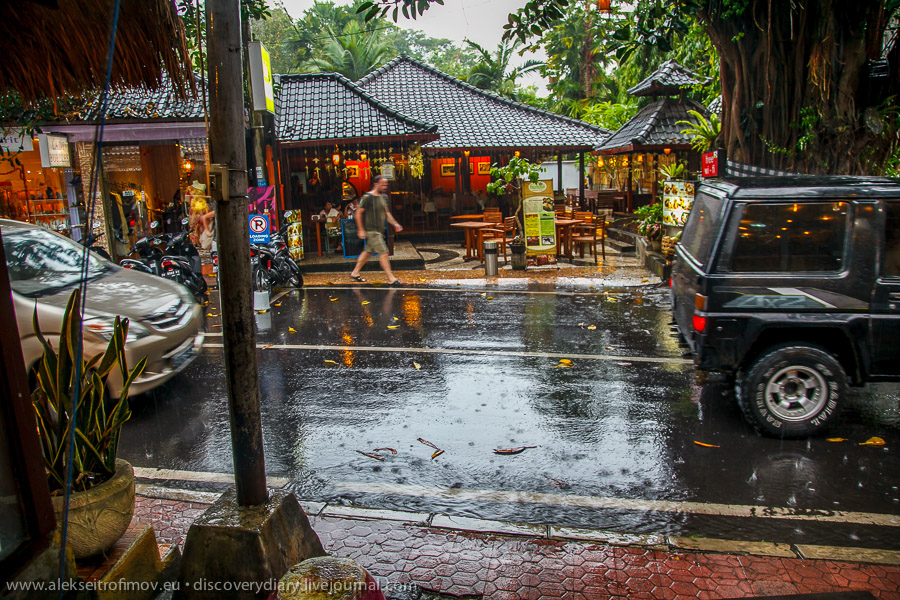 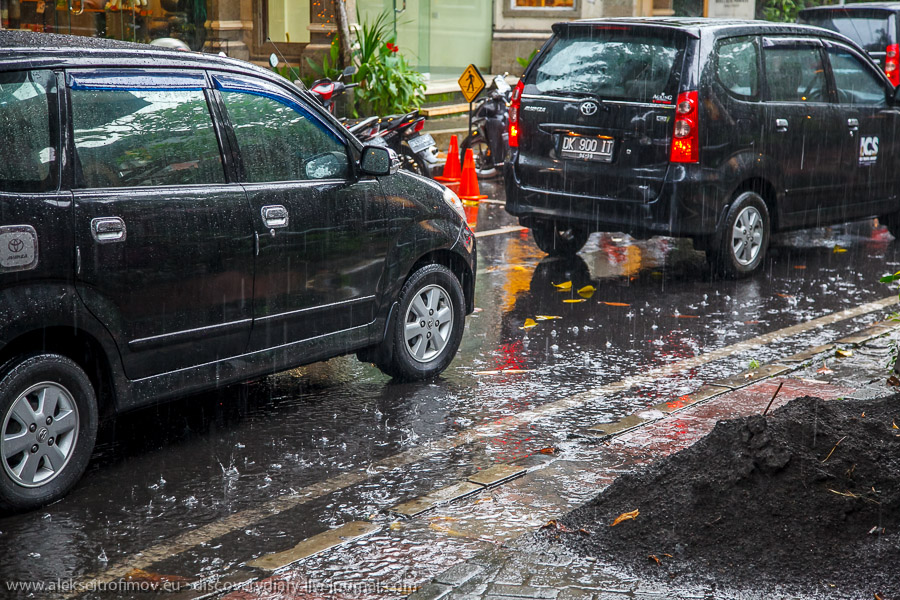 And finally another characteristic touch of Bali. At the entrance of most every house you come across these ritual objects, small containers with flowers and burning incense. It was explained to me that each colour and plant has a significance, corresponding to a particular deity, cardinal direction or an idea. Thus every offering is unique and has a particular meaning. As you walk a street in Ubud, you come across an incense offering every couple of metres. Another addition to Ubud’s special feel. 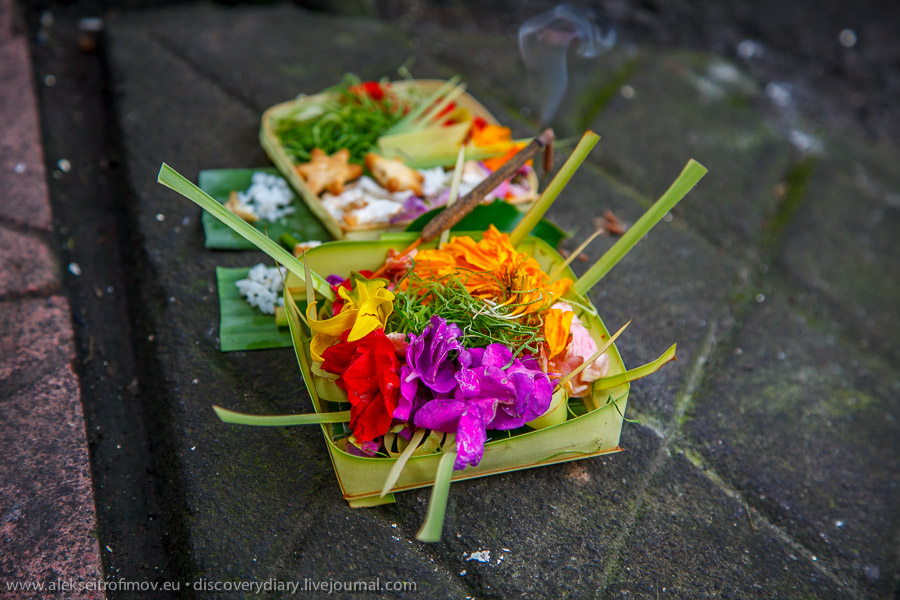