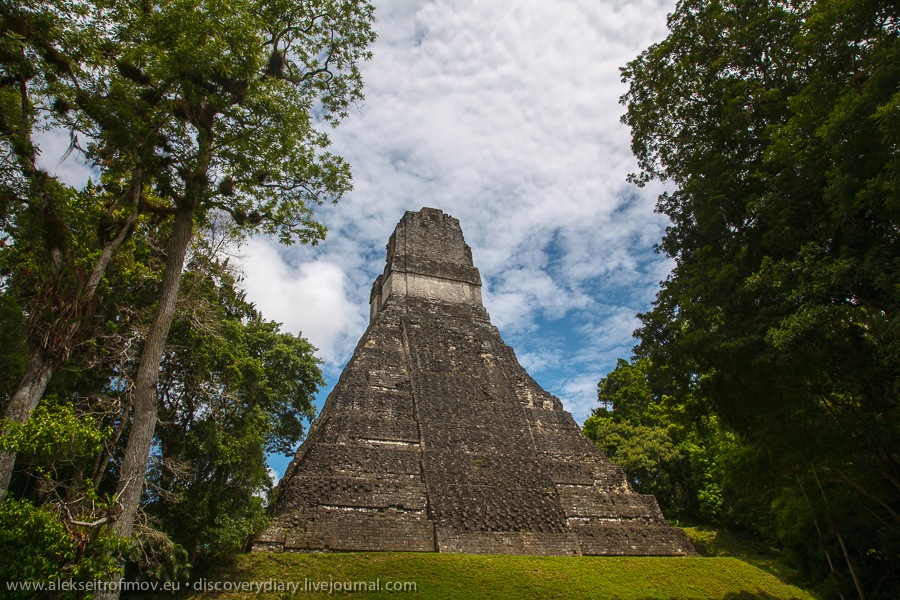 The structure was built as a funerary temple for the most important ruler in the history of Tikal, Jasaw Chan K’awiil I. Although it is somehow covered by silence in Tikal itself, on the web I read that his tomb was discovered in the stone layers below the pyramid and opened in 1962. It cannot be compared to King Tut’s, but still in Maya terms this tomb was a true apotheosis of luxury. Jaguar skins, endless jade, sea shells brought from faraway shores surrounded the king’s skeleton. I couldn’t figure out where all these items are preserved now and I am also wondering why the tomb cannot be visited today, in the way of the Egyptian pyramids. To be able to visit it would be so incredibly fascinating. Perhaps these spaces still hold a sacred meaning for the Maya, or indeed the authorities do not want to encourage the tomb raiders. There are apparently quite a few still uncovered tombs in Tikal. 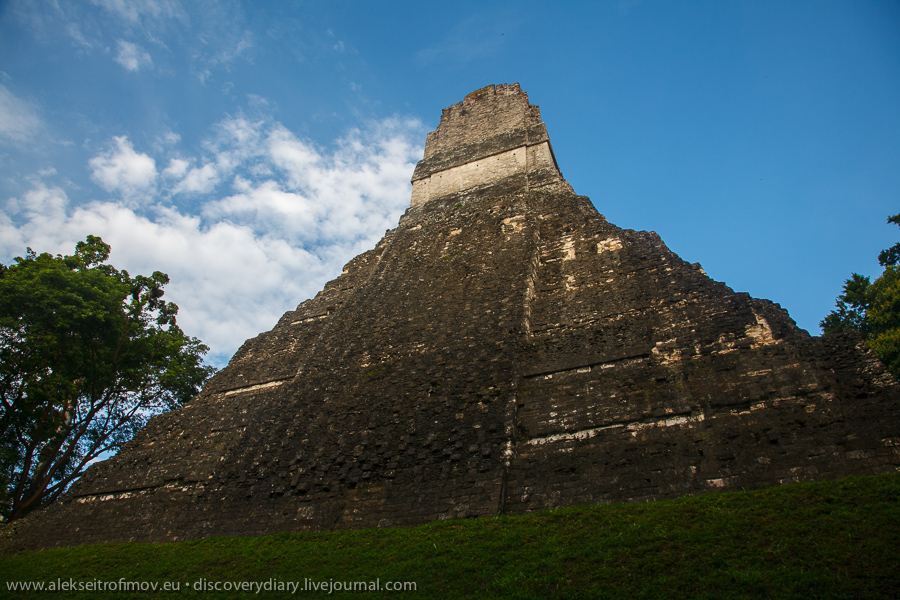 Jasaw Chan K’awiil played a far more important role in the history of his nation than King Tut in the Ancient Egypt. In the year 695 he crushed the main adversary of the Kingdom of Tikal, the Snake dynasty of Kalakmul, and executed the Jaguars Paw, its king. Before this event, in the lengthy competition of the two Maya superstates – Tikal and Kalakmul – the latter was slowly prevailing, surrounding Tikal from every side by its own vassals and cutting trade routes. However this decisive victory changed the history entirely and Kalakmul never recovered. That being said, in the 9th century the Maya lowland civilisation mysteriously collapsed, probably due to changes in the climate, and by the year 1000 all the Maya lowland cities, including Tikal and Kalakmul, were left empty. 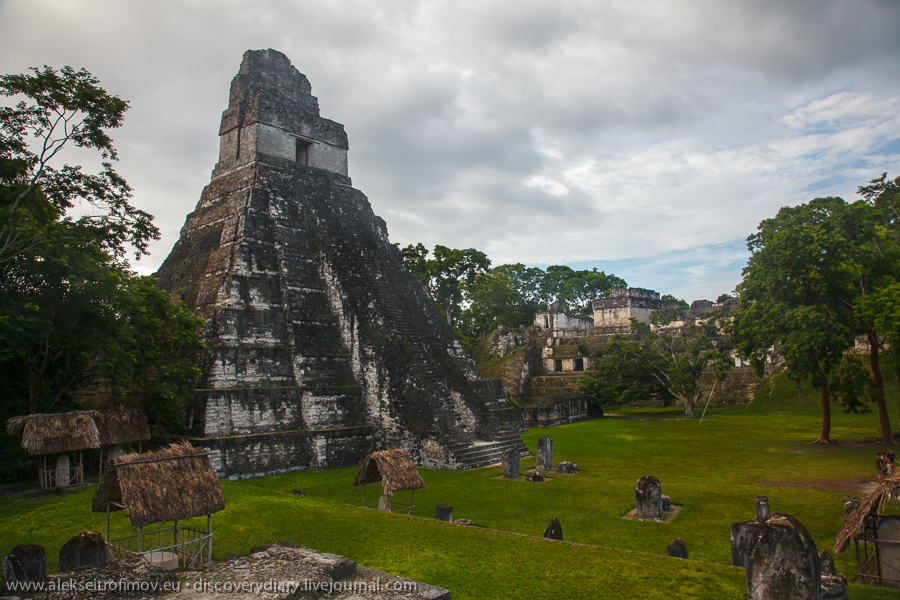 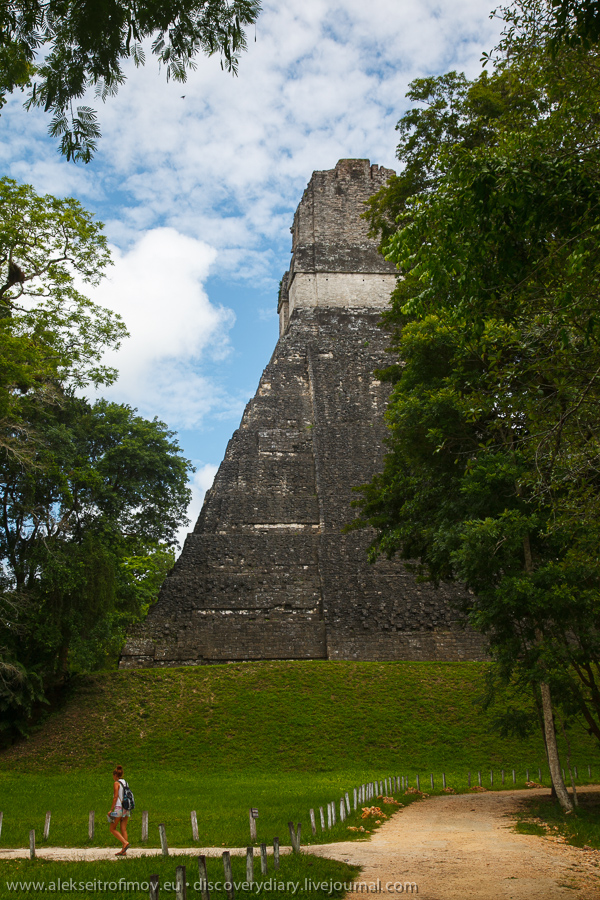 Temple II
Temple Two is found straight across Temple One. Together these two temples mark the extent of the Grand Plaza, the sacral heart of Tikal. Temple Two covered the remains of Lady Twelve Macaw, the favourite wife of Jasaw Chan K’awiil, who died about 30 years before him. 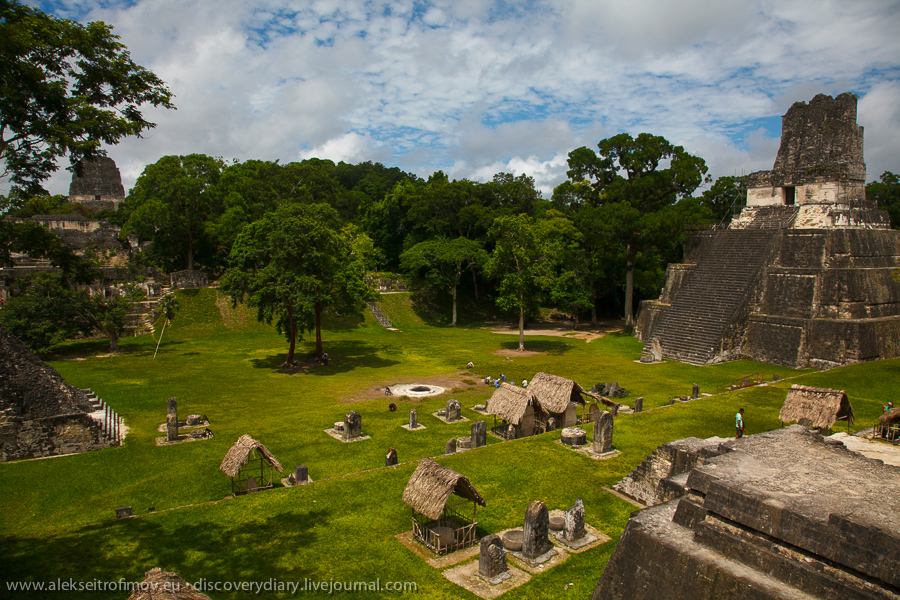 Temple IV
Depending on the methodology, this structure may be considered the tallest in pre-Columbian America. It looks like a huge mountain topped by a temple, because its lower levels have not been cleared. Temple IV was built by the son of Jasaw Chan K’awiil and Lady Twelve Macaw, during whose reign the empire of Tikal reached its peak. It is likely that his tomb is somewhere below the pyramid, although it has not yet been discovered. 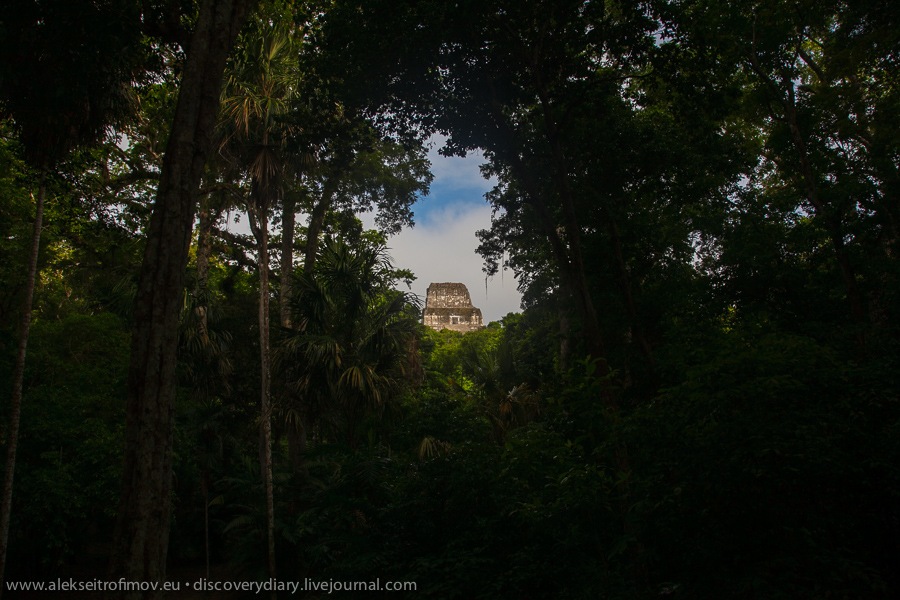 Temple Four is a cult place for modern tourists, as it has the best view of Tikal, almost like from a helicopter. Not long ago the tourists paid to the guards to stay on top of Temple Four for the night and meet the sunrise, but now this is no longer possible.

The view of Tikal: 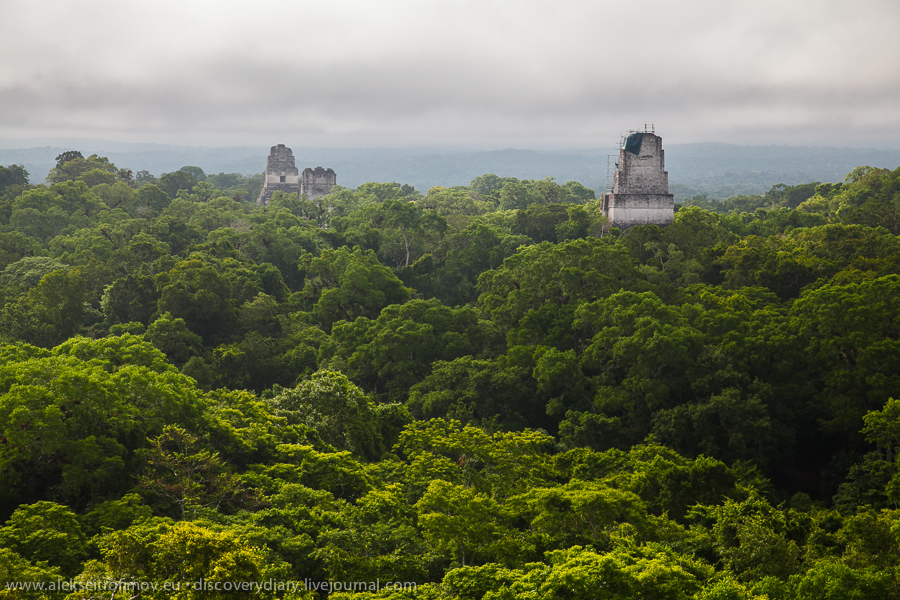 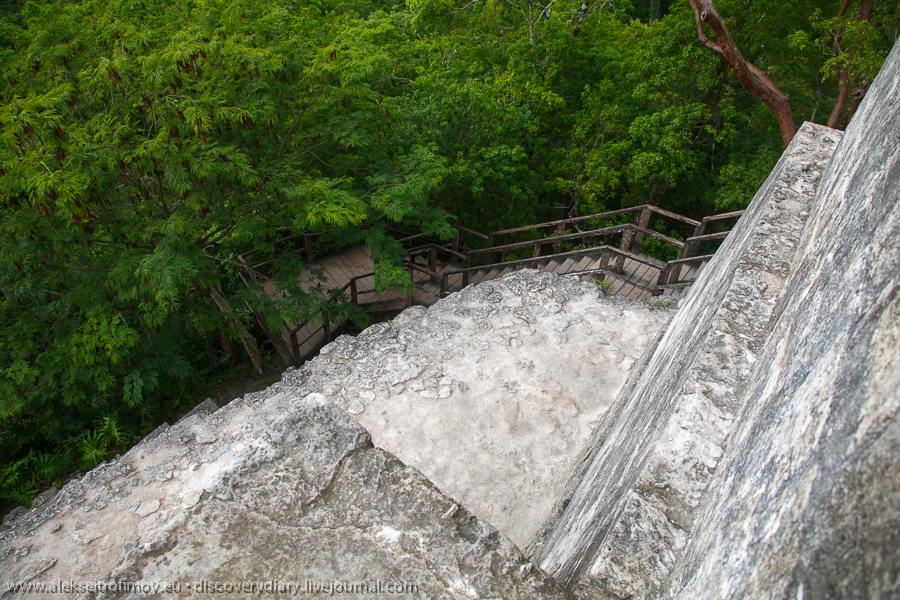 Temple V
Another majestic structure, built later than Temples One, Two and Four, as seen from the Central Acropolis: 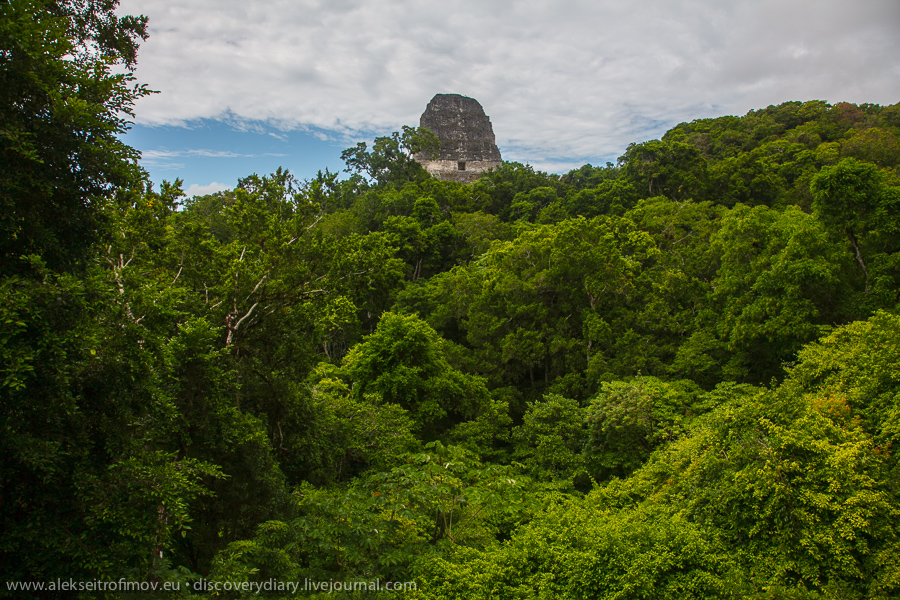 Like many other ancients, the Maya did not know how to build a true arch. This is why everywhere in Maya cities one can observe the corbel arches like this one. Three months ago I was walking around Angkor Wat and marvelled at how similar the corbel arches there look to the Maya ones. Also the arches inside the Egyptian pyramids look the same. 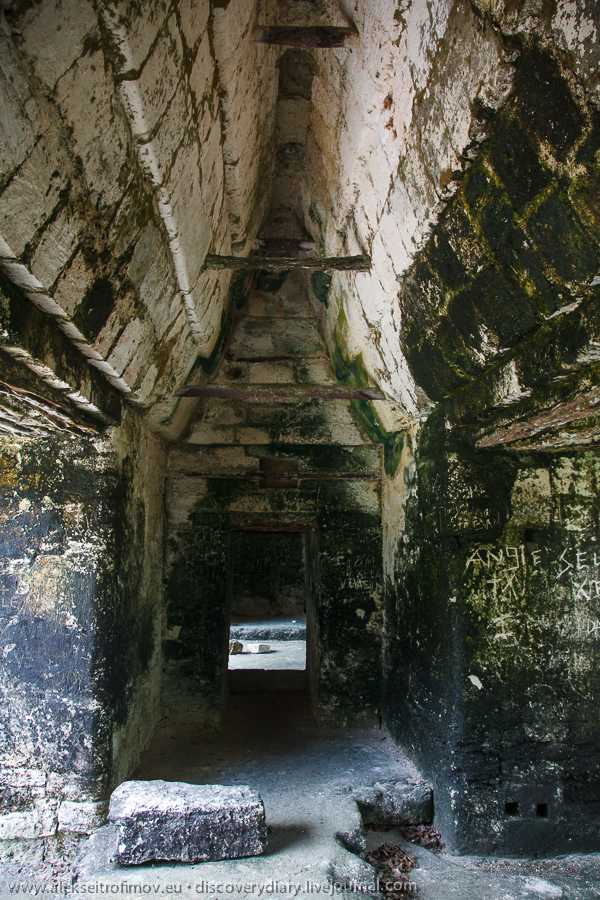 A sign by the pond at the entrance of Tikal, suggesting vigilance: 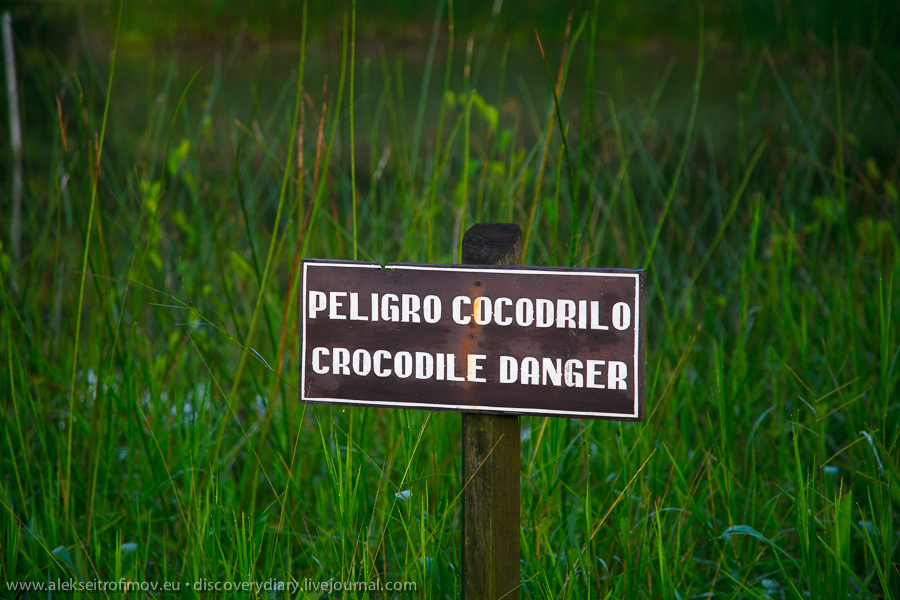