Arequipa is the White City of the colonial Spanish administration. After the bloody Indian uprising in the 18th century, which almost took Cusco, the Spaniards no longer felt safe there. The fact that Arequipa is 1000 metres lower than Cusco didn’t hurt.

I chose Arequipa as a base for some unusual trips, which were still to be determined at that point, and also simply because its name sounded exotic and exciting to me. At that time I didn’t yet know that my trip out of Arequipa would be to the Colca Canyon. I was also considering the ascent of the Misti volcano, which is considered technically easy, but the weather conditions at the time were not favourable (although the local tour agencies would be ready to go in any weather). Also I realised that while the basic mountaineering equipment could be lent by the agency, the ascent would also require some seriously warm clothes, as it snows on the top and the temperature can easily go below zero, which is not fun when you have to spend a night in the camp on the volcano. I didn’t have such clothes and didn’t feel like buying them thus increasing my luggage. I must admit that the clothes would come in handy on the cold Lake Titicaca. 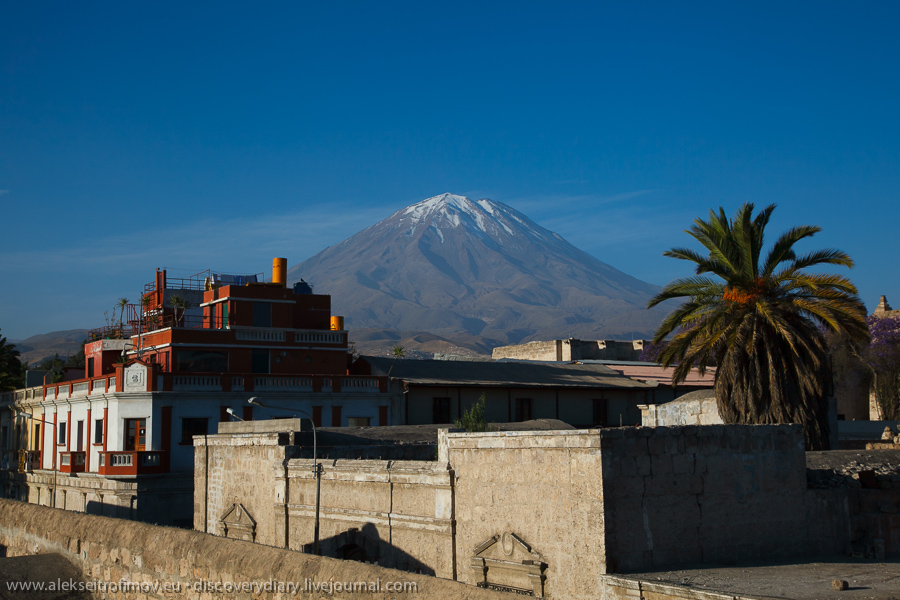 and Chachani. Although the latter looks like a number of peaks, in reality it is just one volcano with a number of lava exits. There is also a third volcano nearby, Pichu Pichu, but it cannot be seen from the city. It was explained to me that Misti is a male character while Chachani is female (chachani means skirt in quechua). They are considered a mighty volcano couple. The Incas saw the mountains as goods and gave them human sacrifices. In Arequipa there is a curious museum of Andean mummies, which were found on the volcanos. Normally the adolescents of either gender were sacrificed. A group of priests together with the teenager would climb the volcano, make him or her drink a lot of chicha (corn beer) and chew coca leaves and then, when the teenager would enter a different state of consciousness, he would be killed with a sharp stone hit on the head. As it is very cold at this altitude, some mummies were ideally preserved and discovered in our times.

By the way, the reason why in the Colca canyon it was important to listen to the mountain was that a couple of days before there was an earthquake in Arequipa. It was on Sunday around midday. I was sitting in a café at that time and I had the impression as if a lot of cars suddenly stopped outside the windows. I didn’t attach much importance to this sound and only later people explained to me what it was. In the canyon we could see obviously recent heaps of stones brought down by the landslides, and Pepe told us that some mountain paths were rendered impassable. We had to listen in case there was another trembling as then there would be a risk of further landslides. 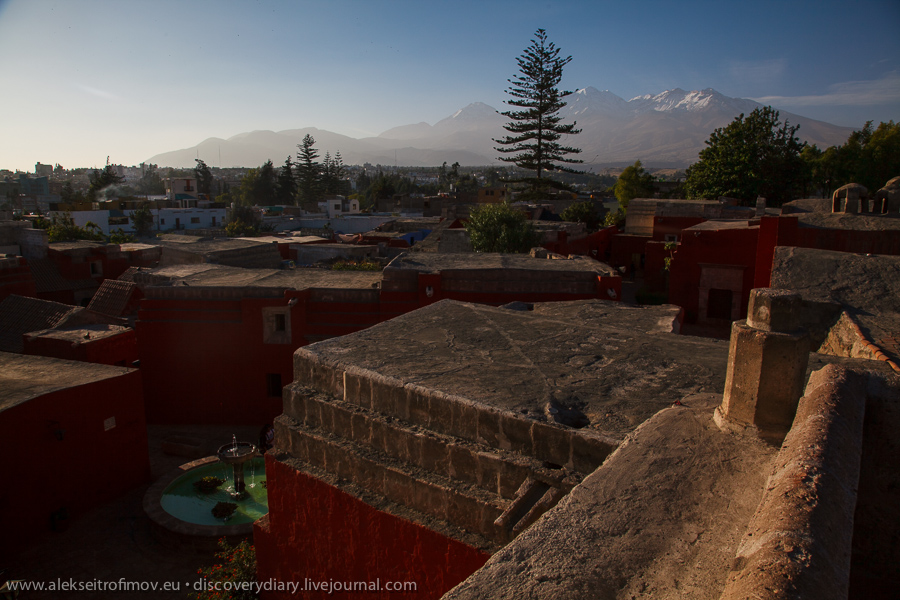 The previous two photos were made in the Santa Catalina monastery. This monastery looks like a city within the city. It is planned with streets and picturesque internal patios. The nuns still live there, their quarters are not accessible to the tourists. 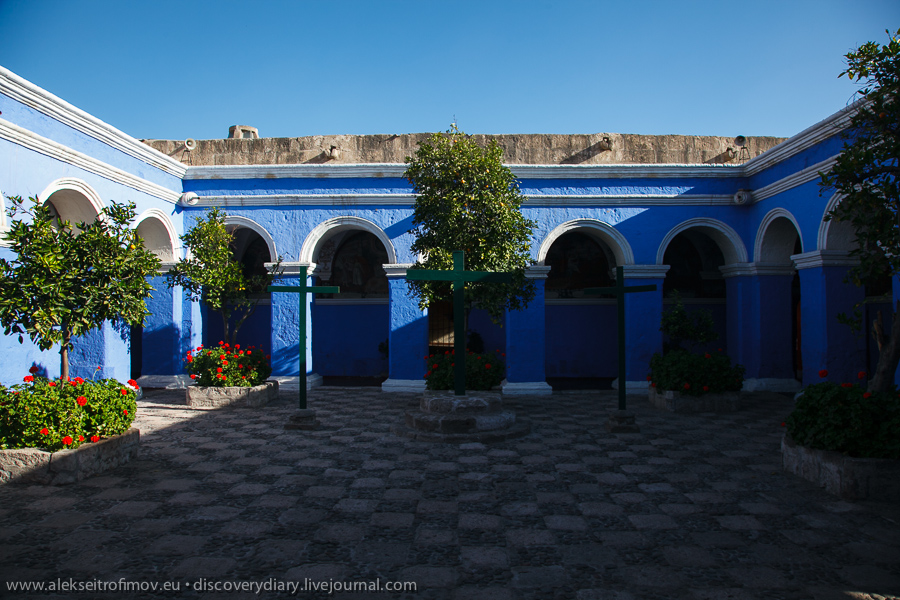 Walking around the monastery, I couldn’t help thinking what a strange invention of the Christian tradition that is. Whole communities devoted to service and to chastity. The monastic tradition in Buddhism is after all very different – there any person can become a monk or a nun and can also stop being one after several years. So there it is a spiritual passage, but not a final decisive choice that it is in Christianity.   The fireplace that nuns used to prepare food: 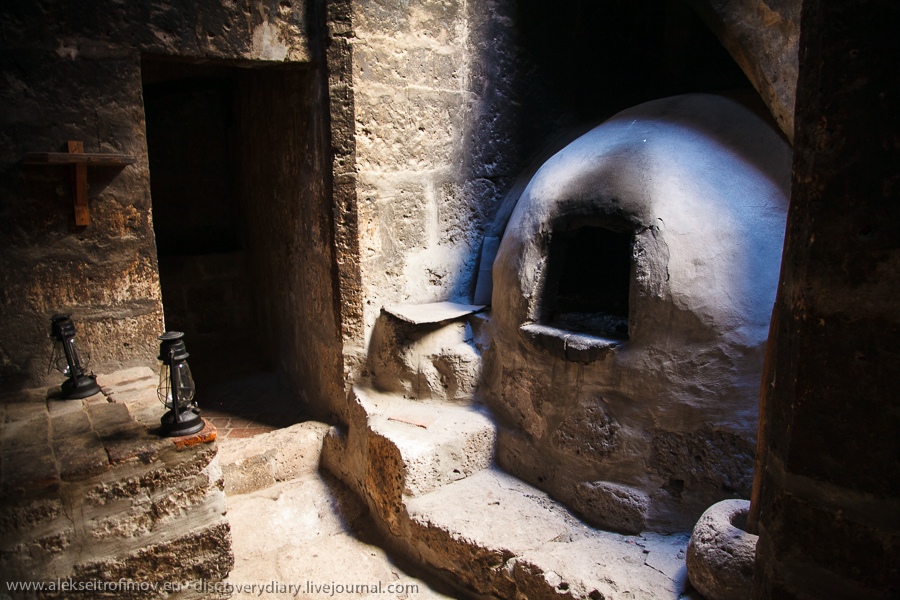 Colourful internal streets of the monastery: 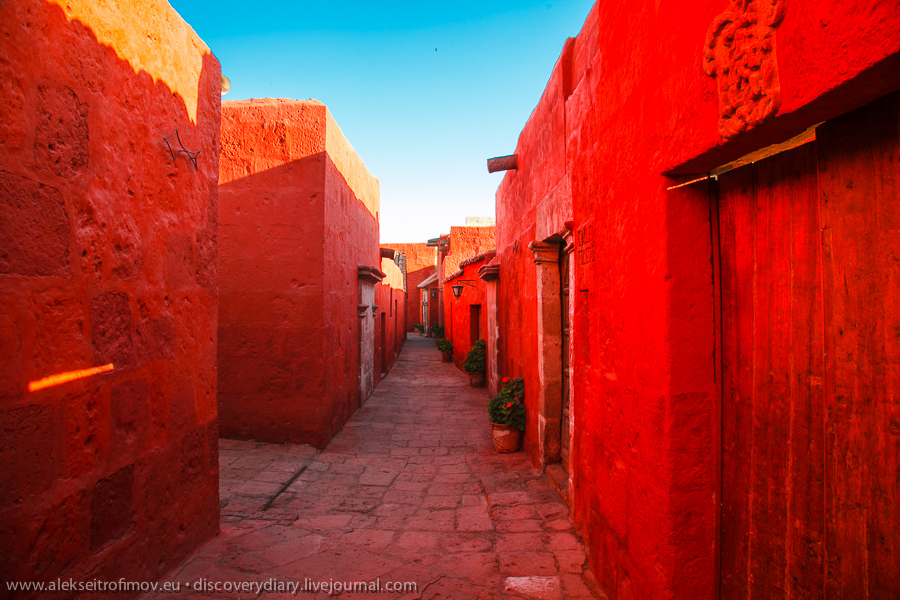 The doors lead of course to the old nun rooms which are no longer in use: 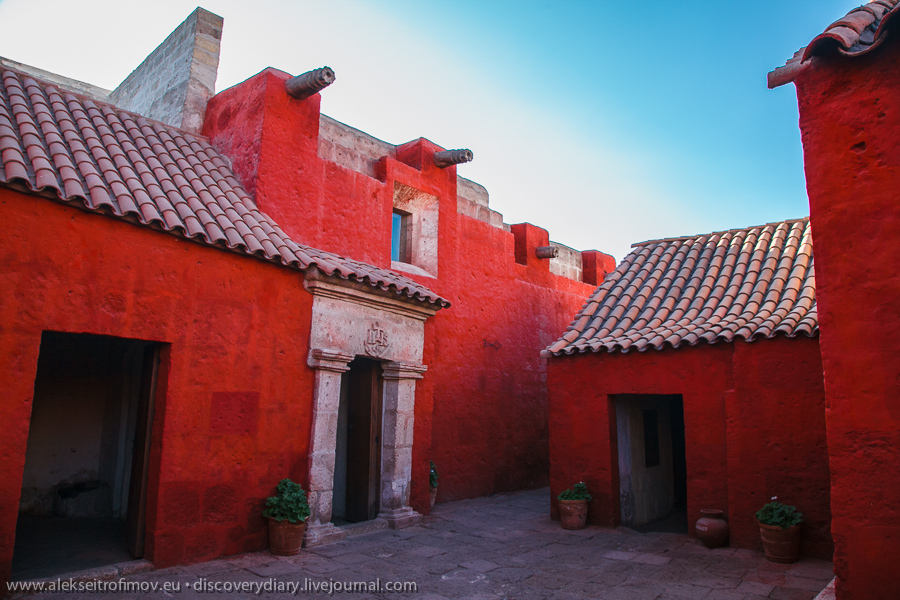 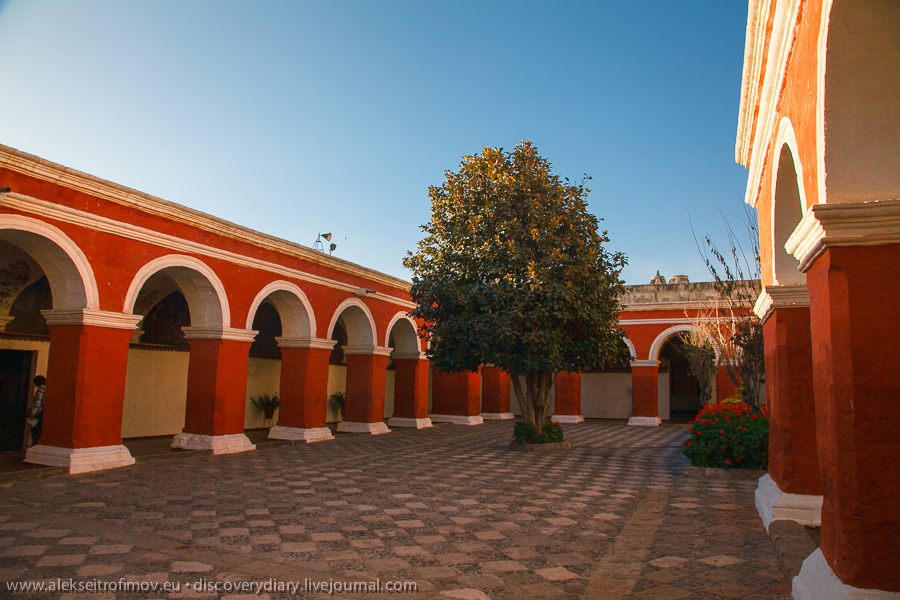 The main square of Arequipa, as always in Peru, called Plaza de Armas: 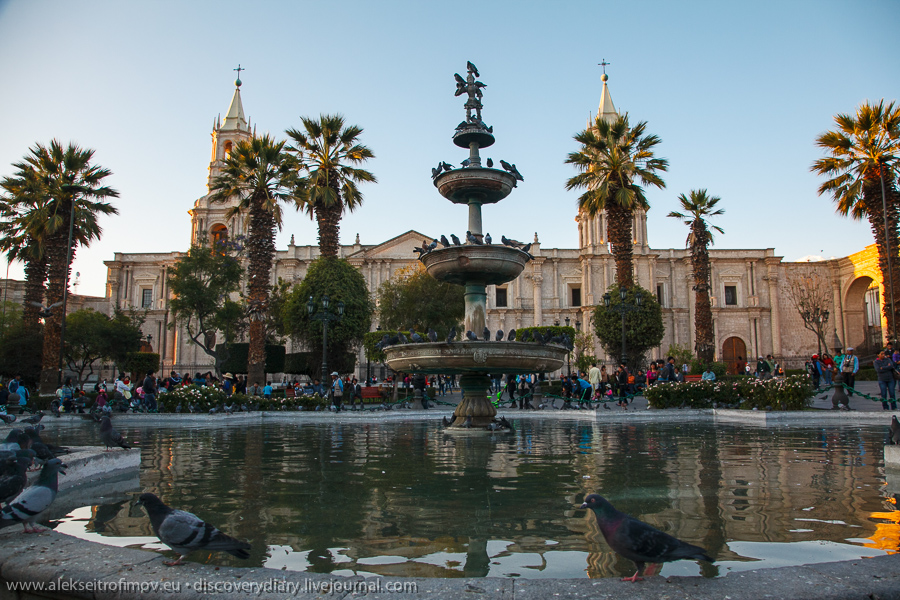 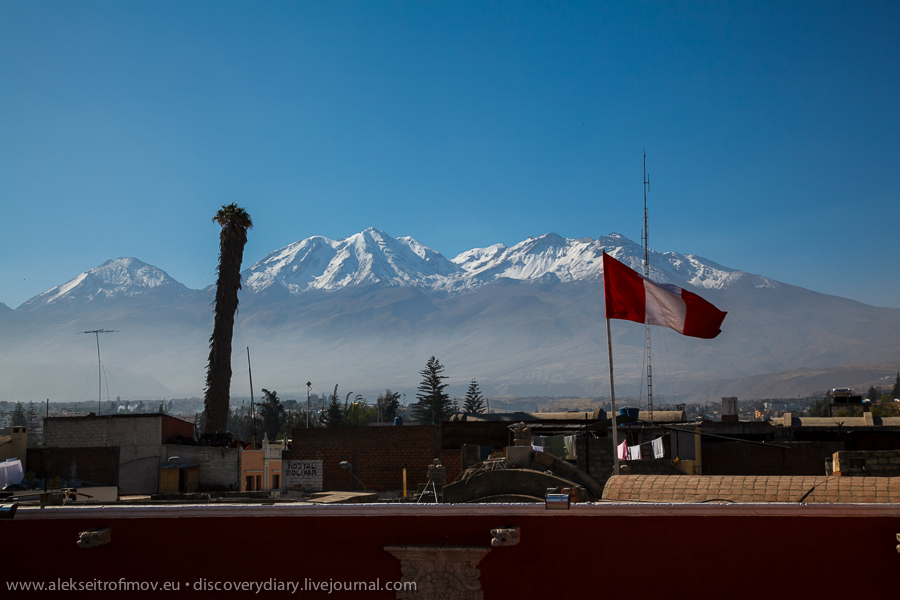 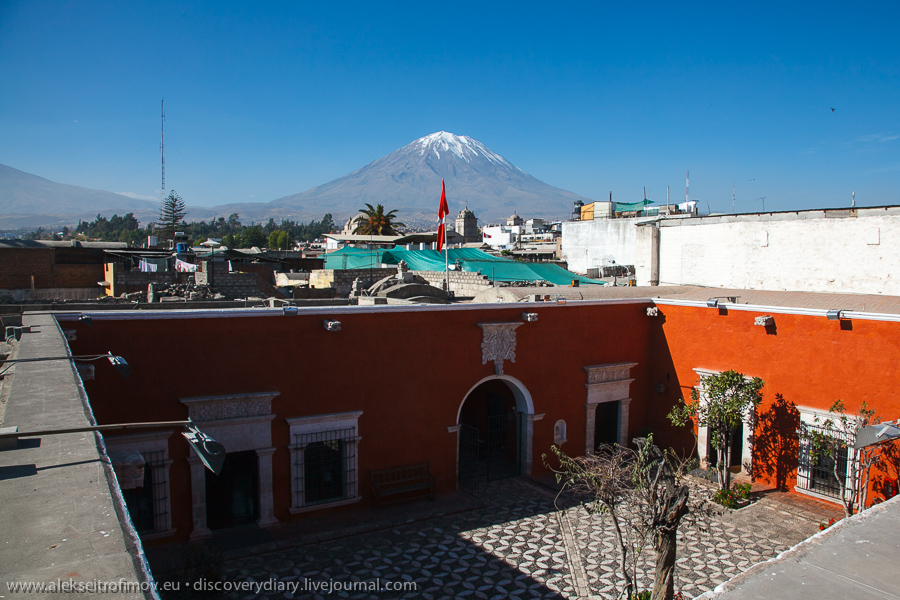