My memories of Seoul are rather hazy, as I spent most of my time there drunk on alcohol and affection. Inhabitants of Itaewon really know how to party! I visited a couple of museums and palaces anyway. Here are some rather disjointed observations of the Korean capital:

1. It was terribly cold – ­after Japan I had to seek the help of my Bolivian alpaca sweater and create le Petit Prince out of myself with scarves.
2. On the other hand, the most wonderful aspect of the Korean hotels is the floor heating. So cozy! Later as I visited the Korean imperial palaces, I realised that this system of heating is a direct descendant of the traditional ondol heating which was used in these palaces. Now we’re all emperors!
3. The Korean food is entirely different from the Japanese food. Tasty, but doesn’t come close in refinement.
4. And overall Korean national character is really different from that of the Japanese. Funny, sharp, confident, brash even. Certainly extraverted. Crossing a street in Seoul, you must be really careful – ­the drivers wouldn’t think twice of driving right in front of you, even on the red light. Unheard of in Japan!
5. The Korean writing is actually an alphabet. Looks exotic, but in fact pretty simple, after a few days I could decipher quite a few signs and recognise words. (I’ve forgotten it entirely by now though.) Korean letters are easy to identify with their perfect geometry. Quite different to say Arabic letters.
6. Oh what a pleasure to be able to pay with a credit card with no fuss!

Photos of the Gyeongbokgung palace. This was the main palace of the Korean kings (later emperors) and the symbol of the national pride. When the Japanese occupied Korea in 1910, they quickly proceeded to disassemble the palace under the pretext of organising a grand exhibition. In recent years though the Koreans have systematically restored most of the palace. This is one of the historically most prominent buildings, hexagon pavilion Hyonwonjong. In this little tower the empress Myoson was killed by the Japanese agents in 1895. She was the key proponent of closer ties of Korea with the Russian empire. As a result of this political assassination the Japanese positions in Korea were further strengthened, which culminated in the Japanese occupation of Korea 15 years later. 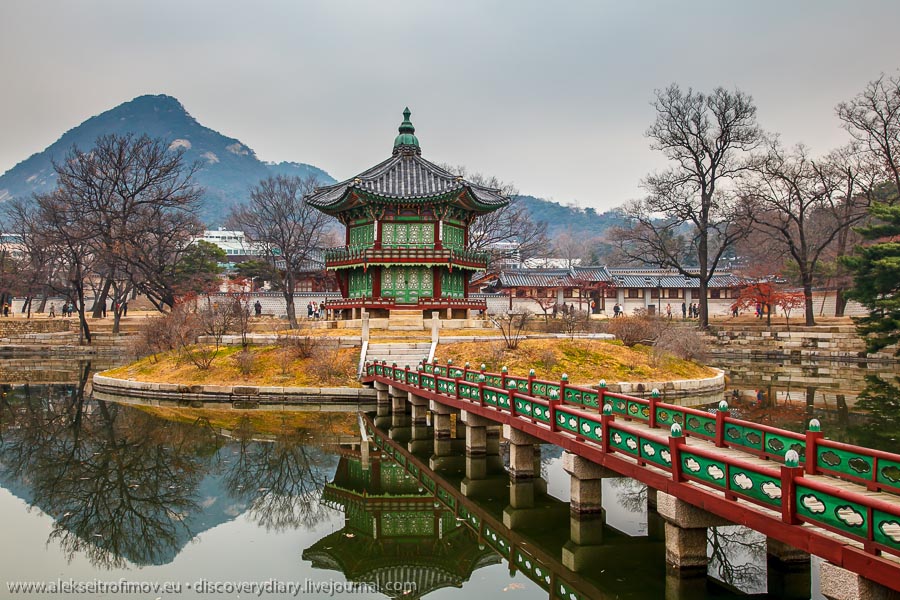 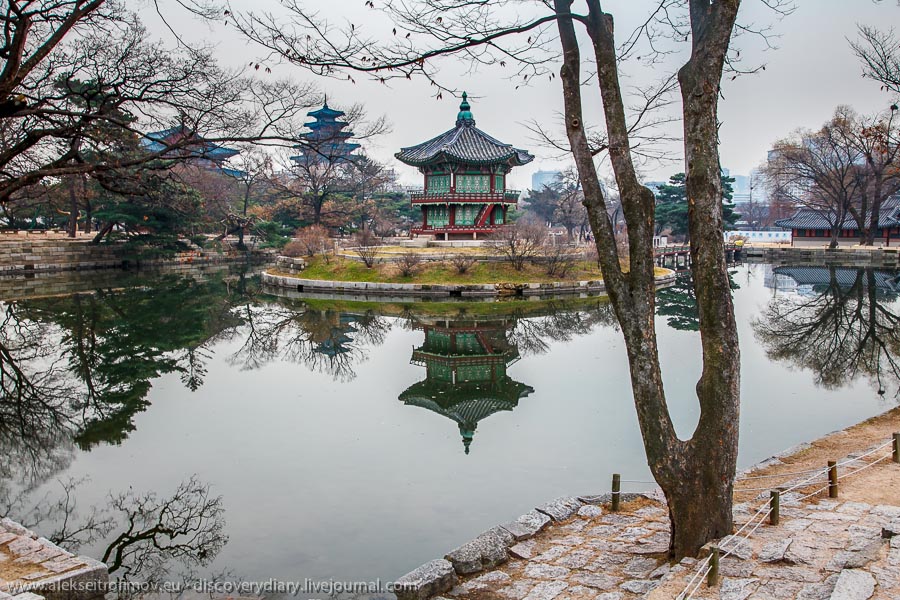 The pond surrounding the tower: 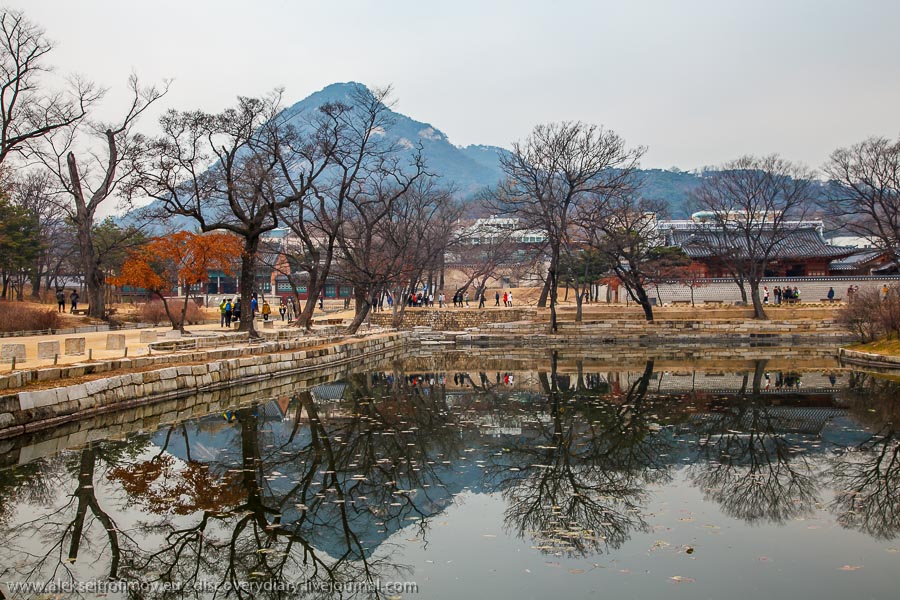 The main hall of the Gyeongbokgung palace. It must be said that the architecture of the Korean palace is much reminiscent of the Forbidden city. No doubt much inspired by it too. 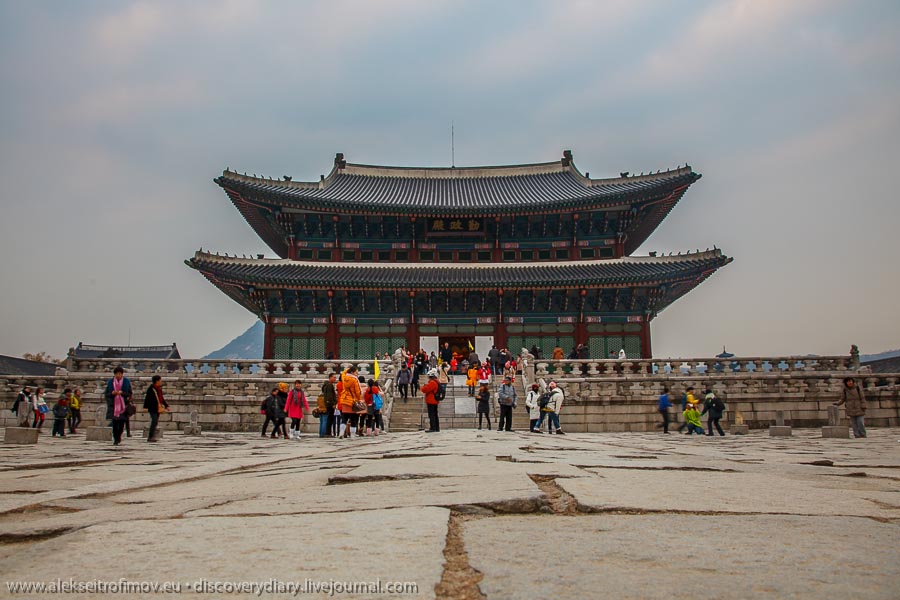 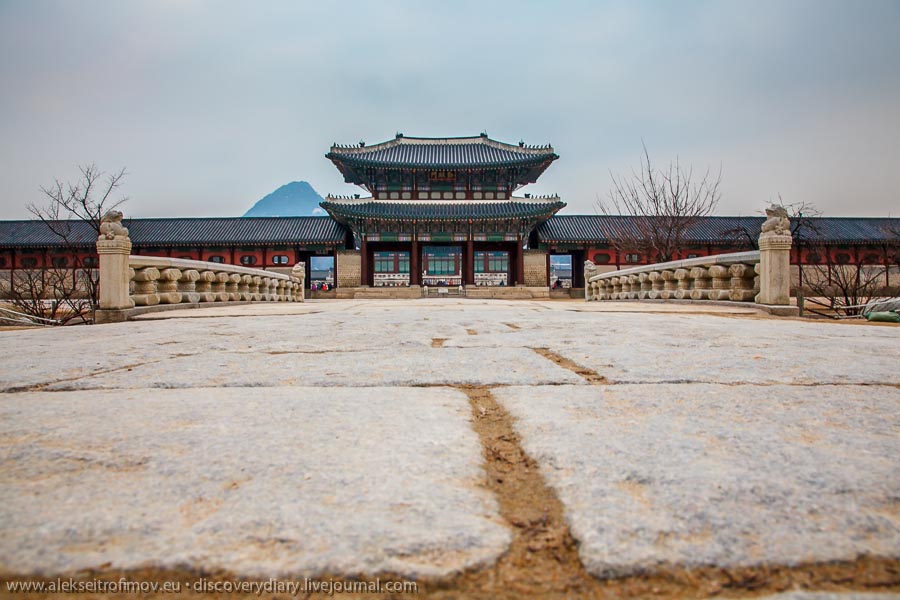 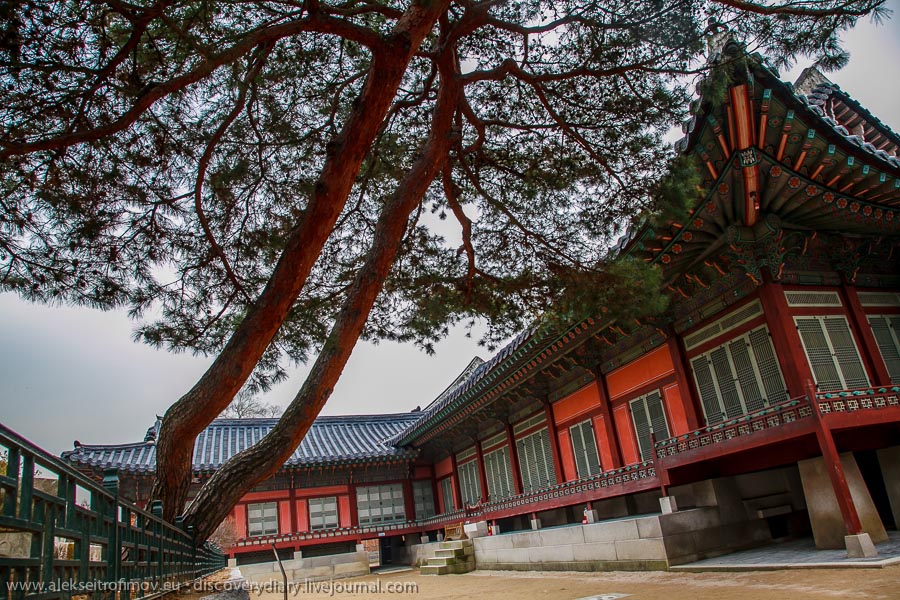 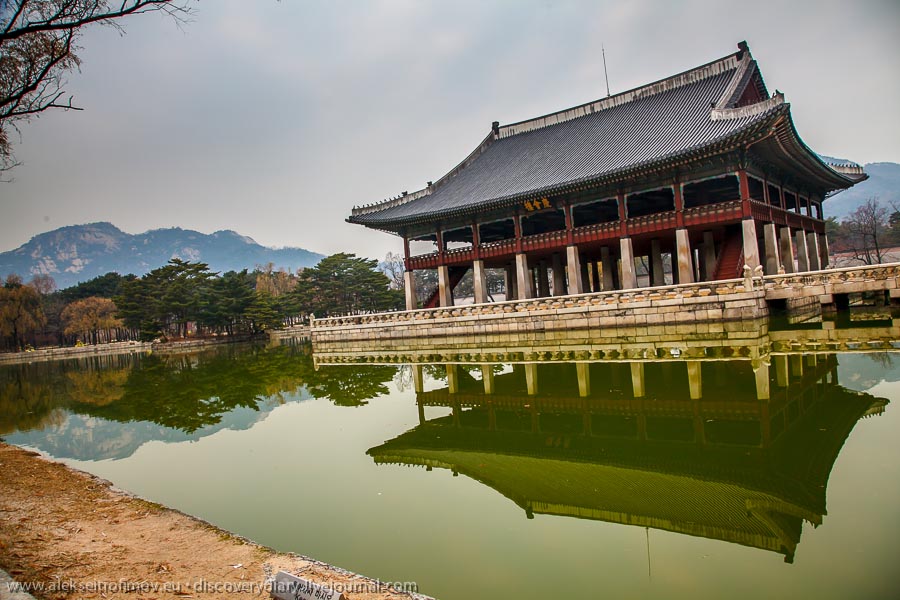 As you pass all of Gyeongbokgung, which in fact occupies a rather substantial area, in its North Western corner you find this gate. Through you can catch a glimpse of the Blue House, the residence of the Korean president. 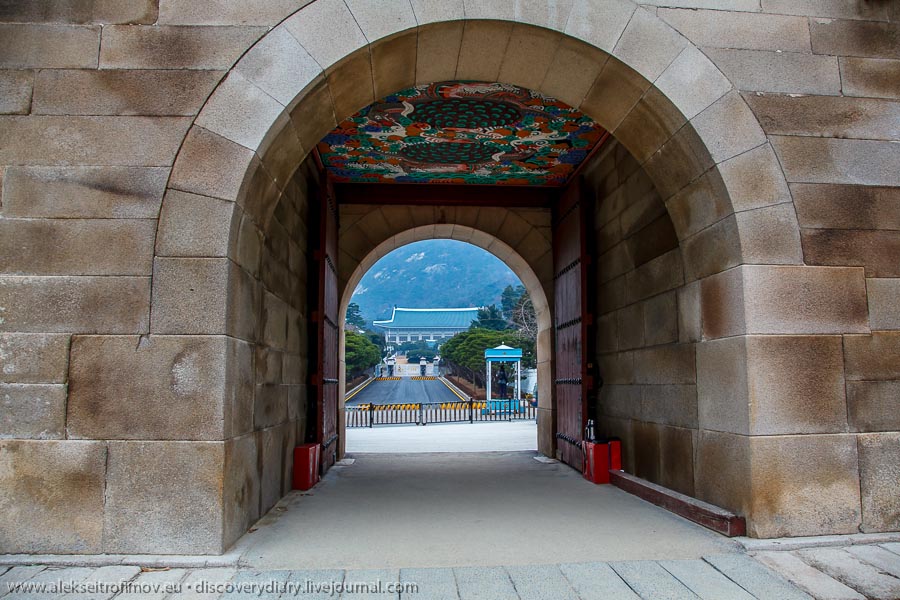 Today the president is Park Geun-hye, a daughter of a former president. When I walked around, a helicopter flew over me in the direction of the Blue House – ­no doubt Park Geun-hye was arriving home. 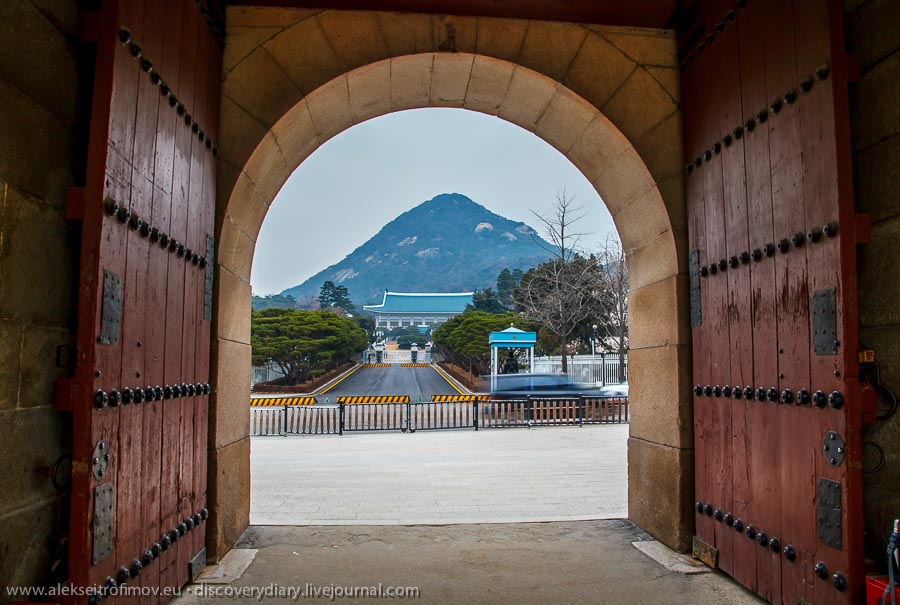 The second most important palace in Seoul is Changdeokgung. This is where the last members of the Korean imperial family lived during the Japanese occupation. After the restoration of independence Korea became a republic, and there is no will to restore monarchy. 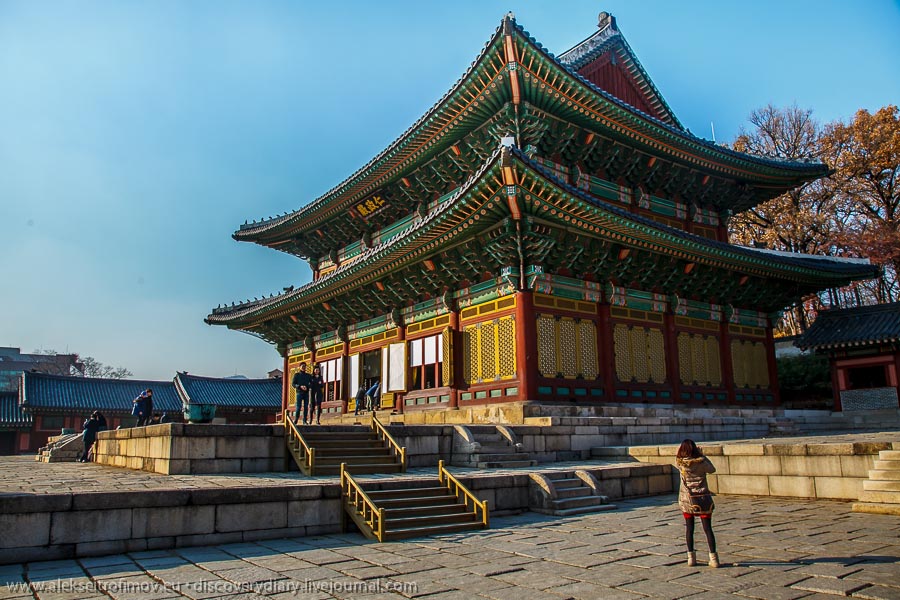 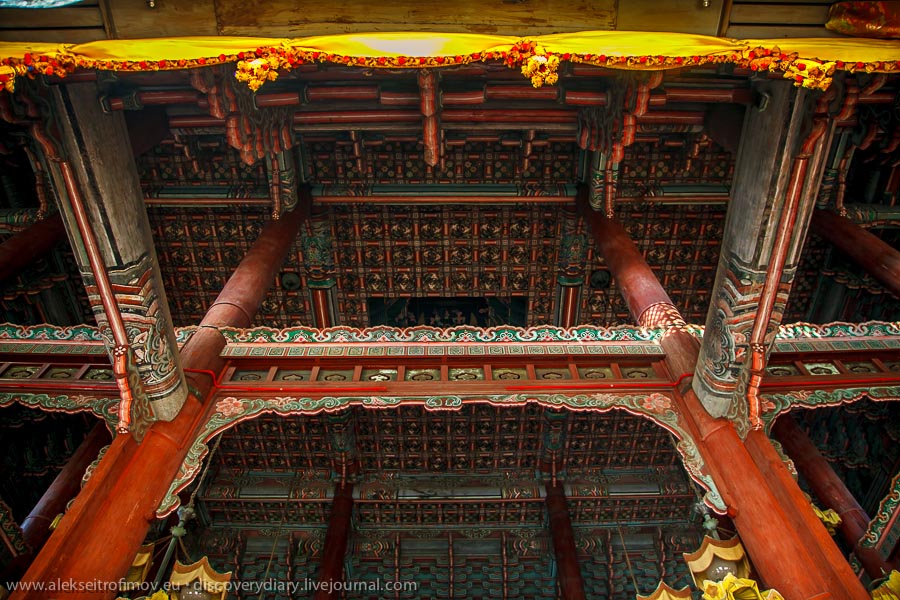 Emperor’s concubines rooms. His wife was chosen from among them by his grandmother. 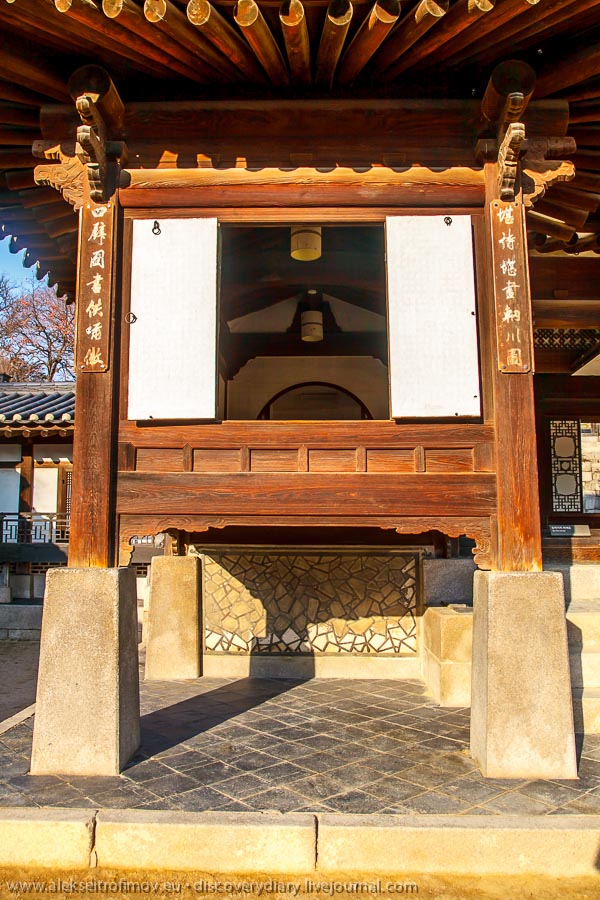 Just like all the other rooms of the palace, these rooms were heated with the traditional ondol floor heating. The internal air passages brought hot air to the floor stones from below. The wall here bears a stylised pattern of ice – ­symbolically protecting from fire, the big horror of the time. 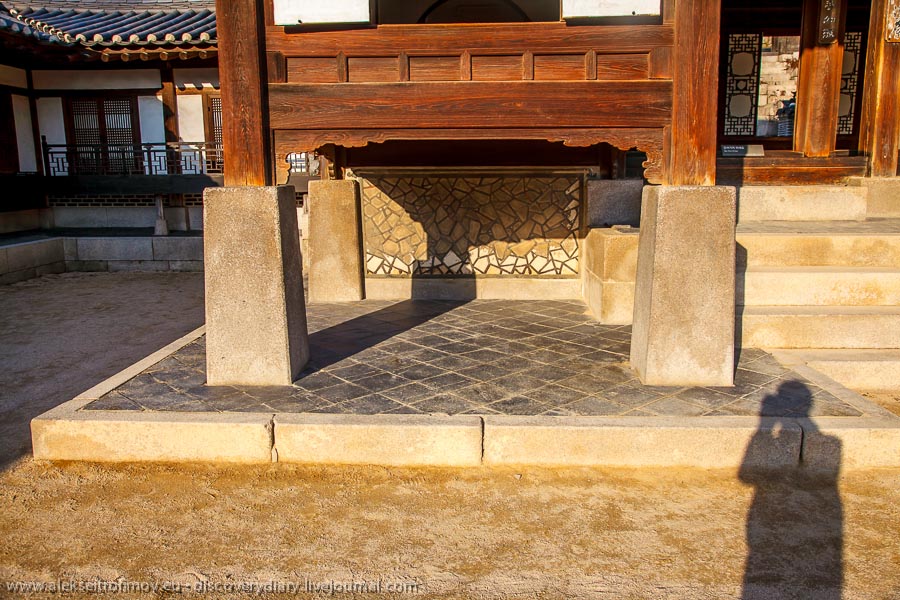 Another pattern, found in the emperor’s grandmother’s rooms. The pattern corresponds to the turtle, the symbol of longevity. 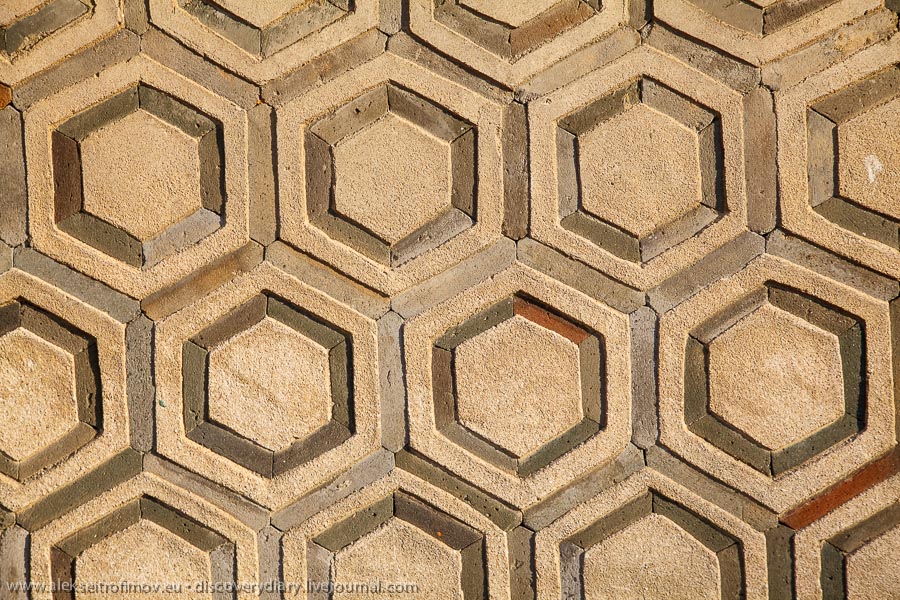 The wonderful Leeum Museum of Modern Art in Itaewon: 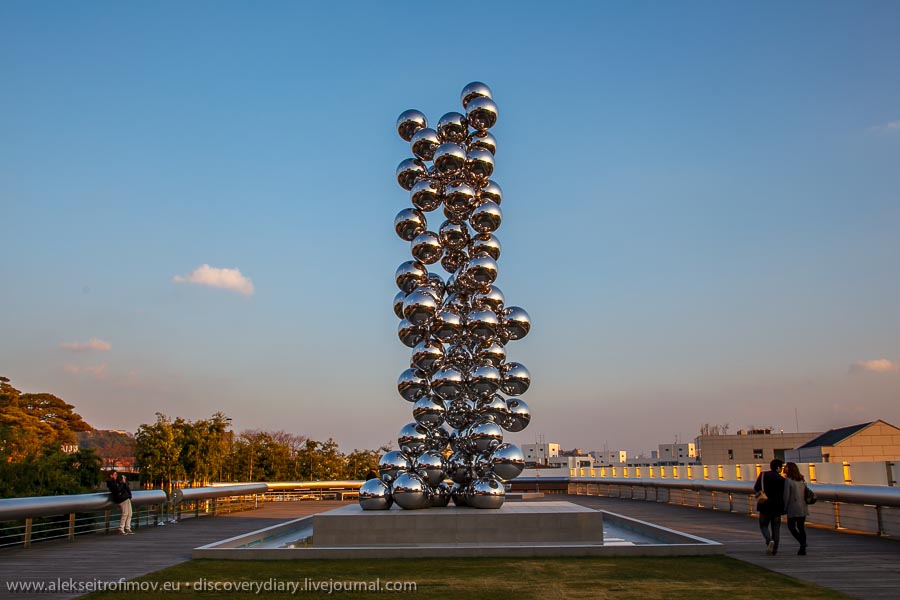 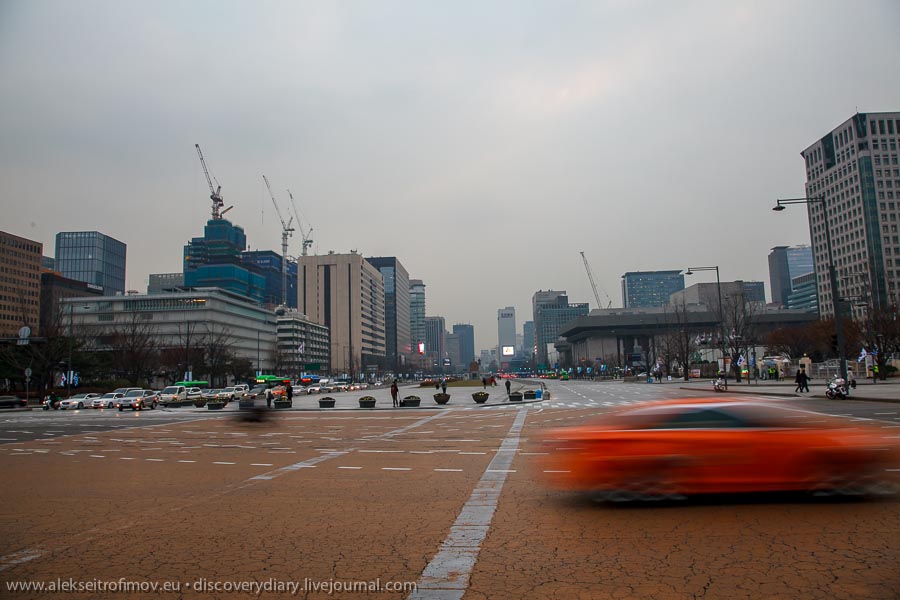 One thought on “Seoul”