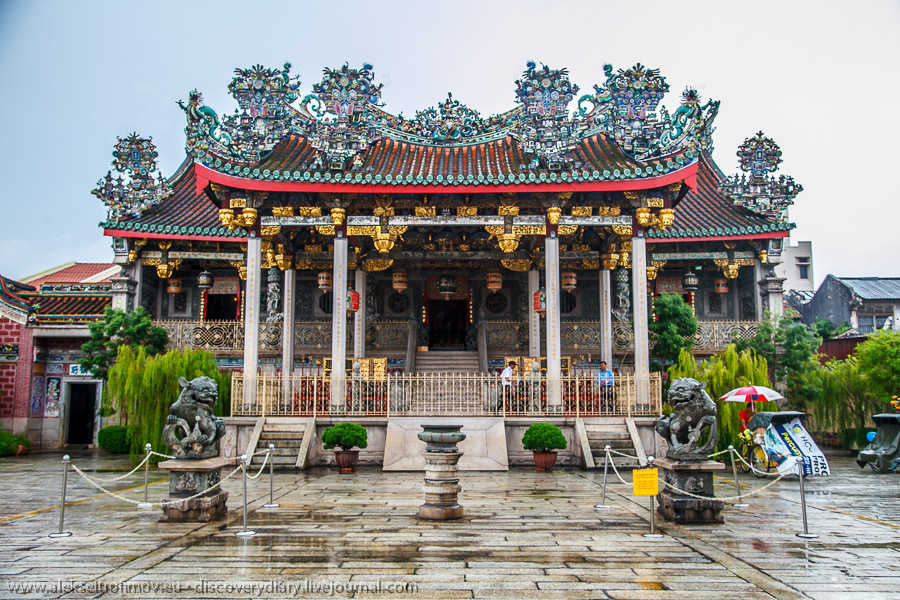 The view of the clanhouse’s internal courtyard from the temple. 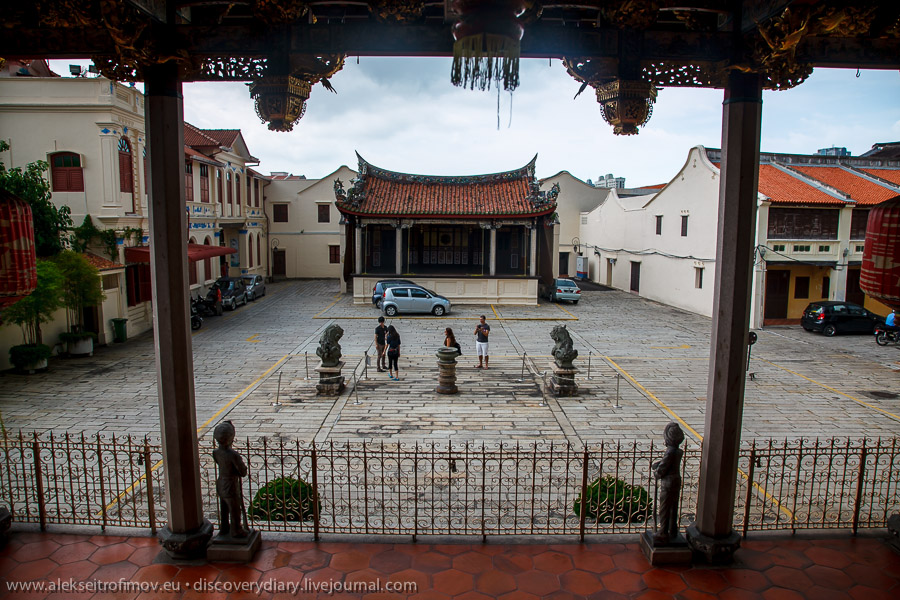 Inside the Khoo Kongsi temple: 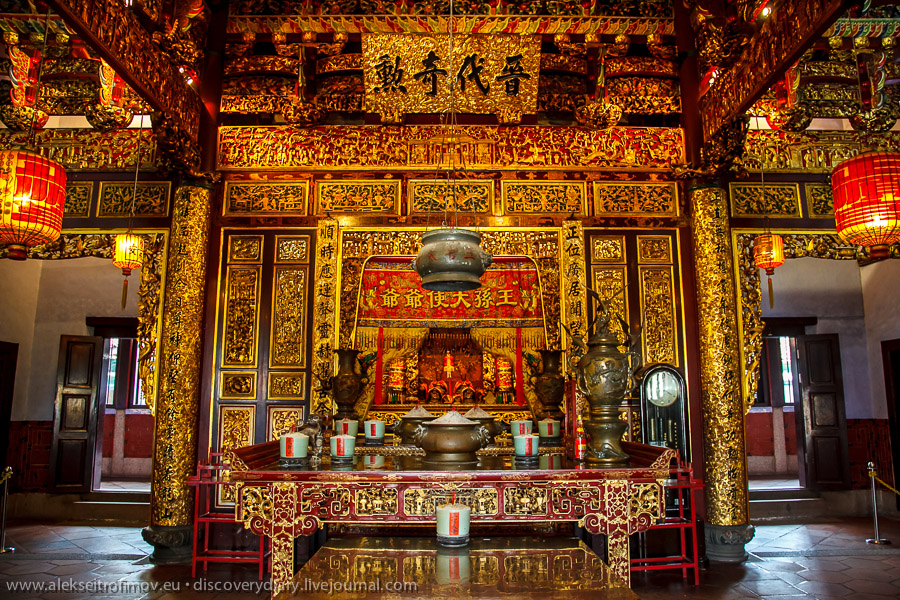 There is a small museum in the basement of the temple which talks about the origin and the internal rules of the clan. Amazingly, all the members of the clan descend in male line from one common ancestor who lived in a small village on the shore of the Yellow City, approximately facing Taiwan. His descendants were particularly enterprising and founded communities in a number of places all over South East Asia. Penang’s clan is the richest and nowadays pays for the restoration of the ancestral village in China. 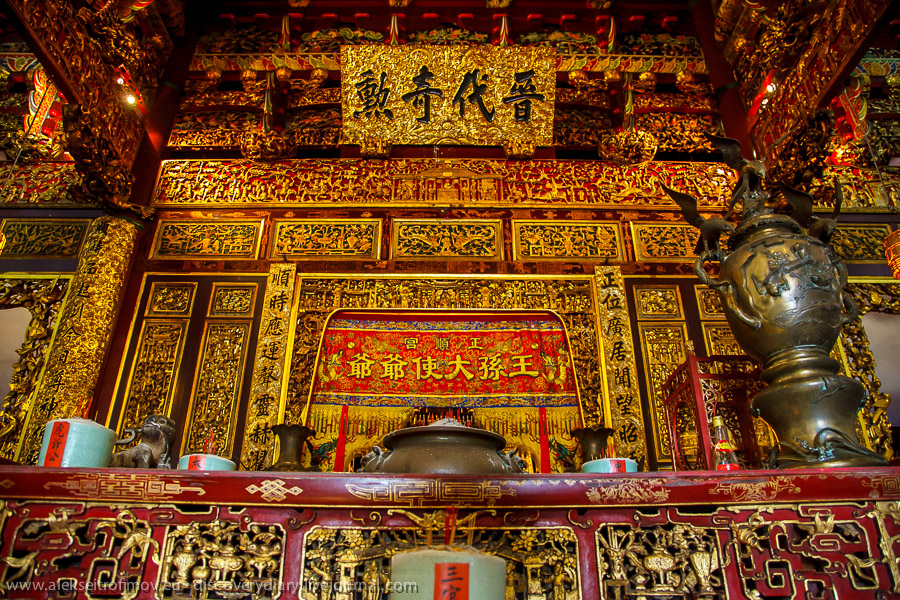 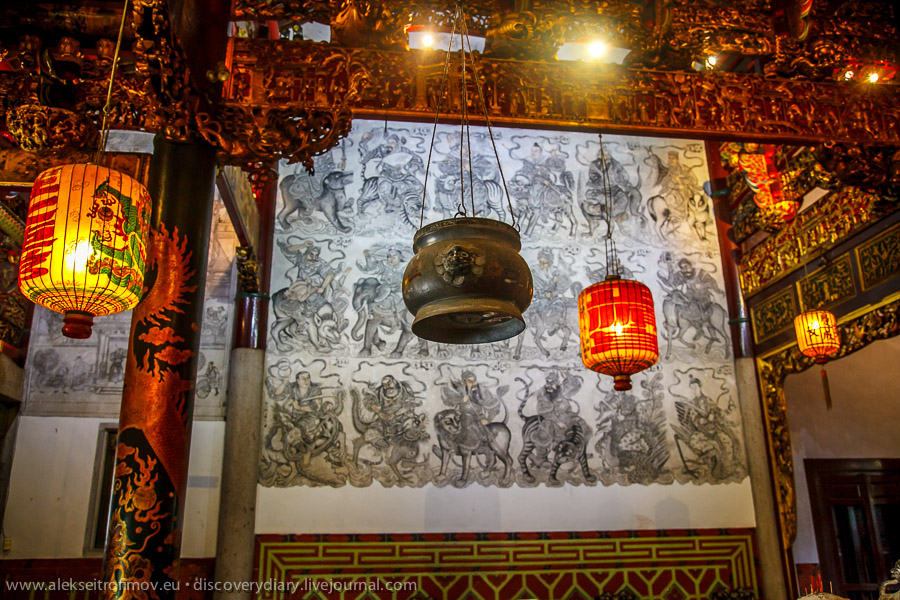 The streets of Little India in Penang: 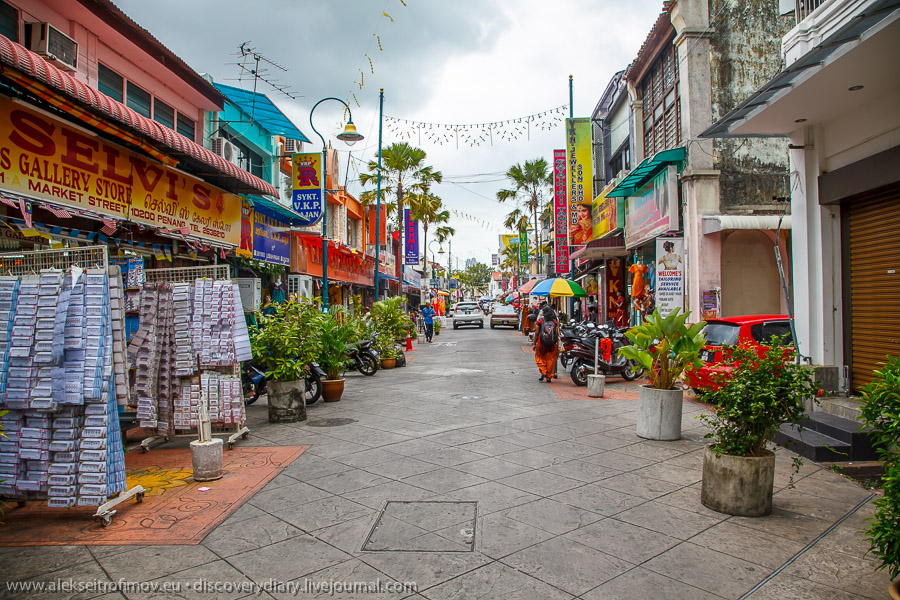 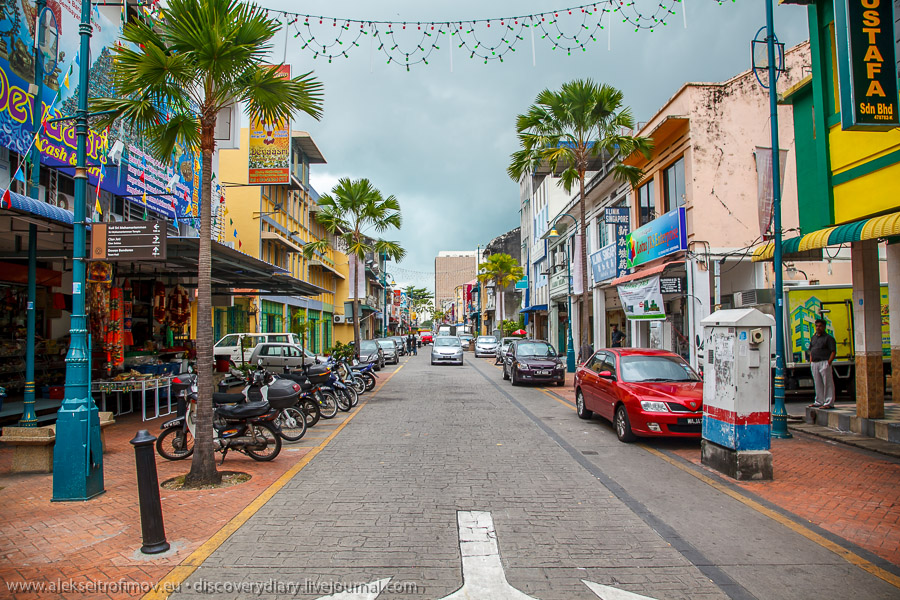 There are two particularly sumptuous restored mansions of old Chinese strongmen in Penang. The first one is referred to as Peranakan Mansion. When we visited it, a local couple was making wedding pictures there. Honestly this mansion was so Chinese-kitsch that there was no way I could imagine living there. 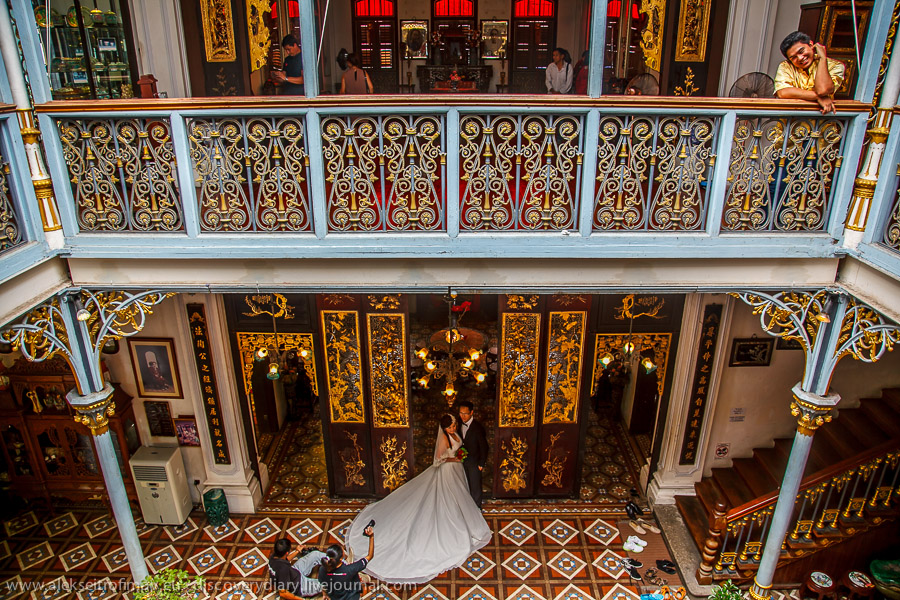 The second famous mansion is Penang is the Cheong Fatt Tze Mansion, which in Penang everybody calls the Blue Mansion. The Lonely Planet informed us that you can actually stay in the Blue Mansion, and on the spur of the moment we called them and reserved a room. When we arrived, we found the place utterly magical, quite empty too. I am examining it in the deep of the night: 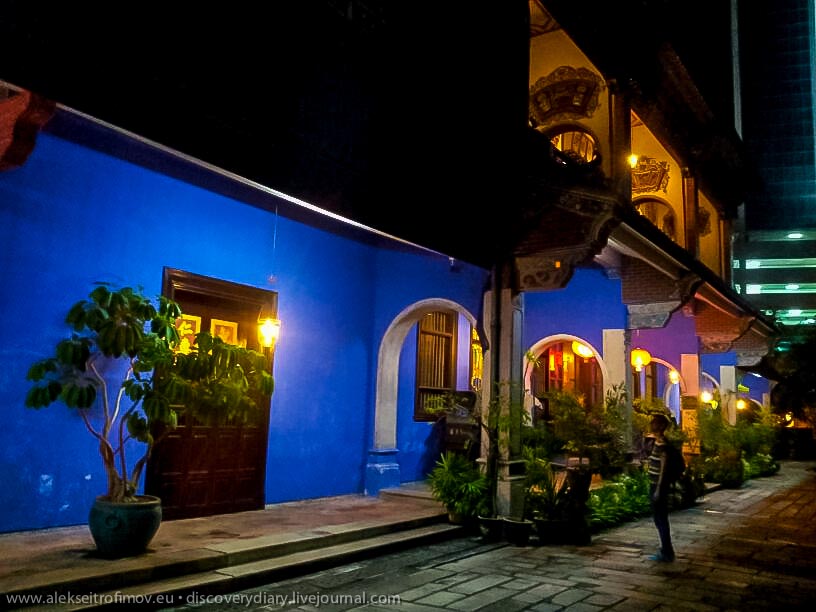 The next morning we took part in a tour around the Mansion. By a coincidence on that very day the tour was given by the owner of the Mansion. The lady told us the fascinating story of Cheong Fatt Tze, an amazingly energetic Chinese businessman who lived at the end of the 19th century and was a true citizen of the world and a trade magnate. He built the Mansion at the beginning of 20th century in accordance with the strictest feng shui rules, which are quite unlike the popular feng shui of today. She disparagingly referred to the new feng shui as “Cantonisation” of China (as a lot of the new feng shui comes from Canton region through Hong Kong and is based on the homonyms of the Cantonese language). After the death of Cheong Fatt Tze the house could not be sold as long as at least one of his many sons is still alive. Only when the last son died at 90 years of age could she together with her husband buy the by-then squalid house, evict the illegal squatters and restore it to its present splendour. Answering my question, she explained that they were restorers by training. Lonely Planet included the Blue Mansion into its Ten Best Heritage Mansions of the world.

The owner-guide talks about the internal structure of the building: 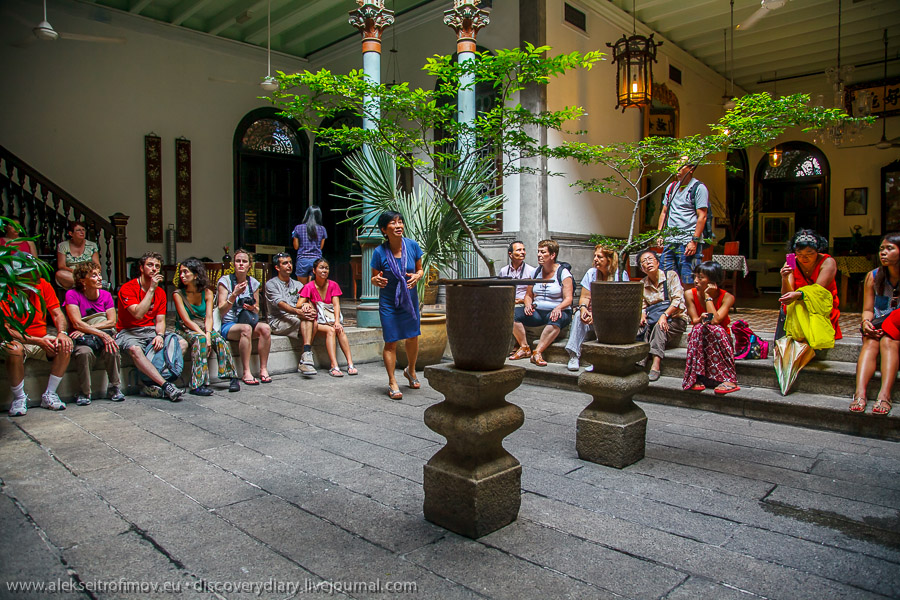 We took our breakfast in the central courtyard: 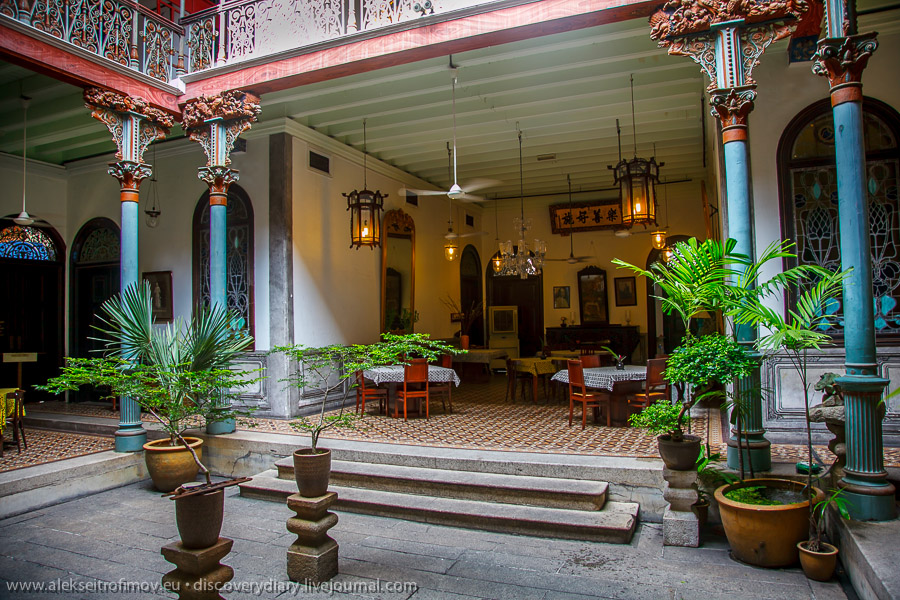 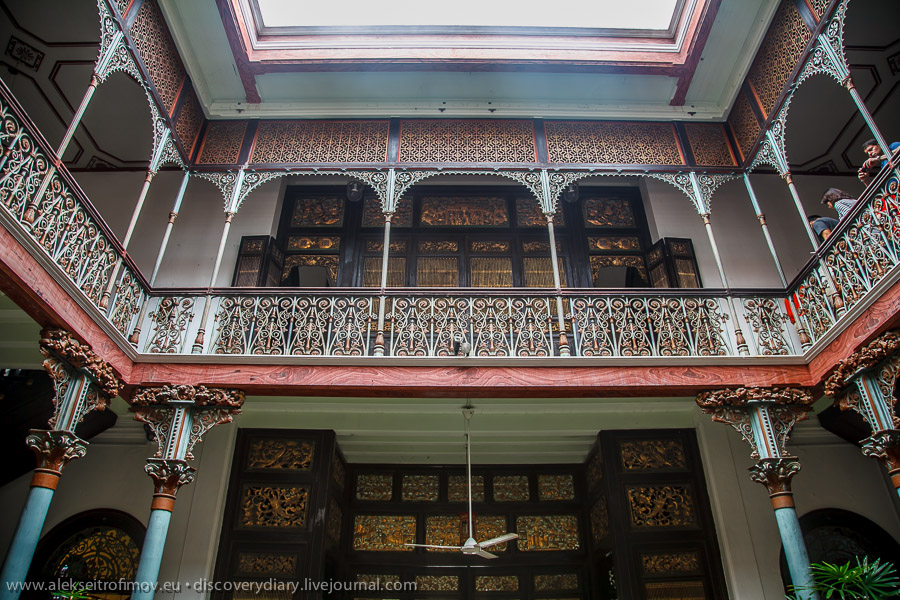 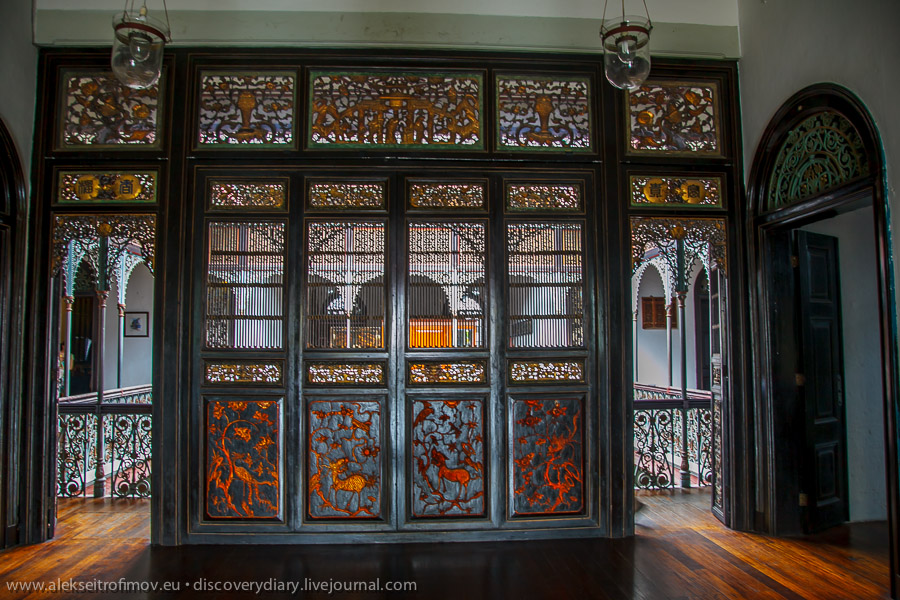 The entrance to the balcony fronting the house: 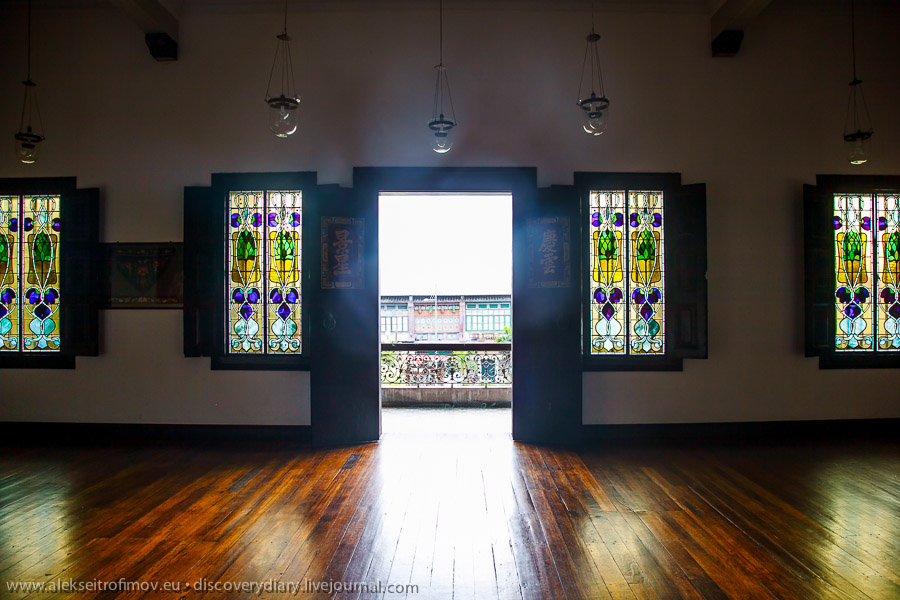 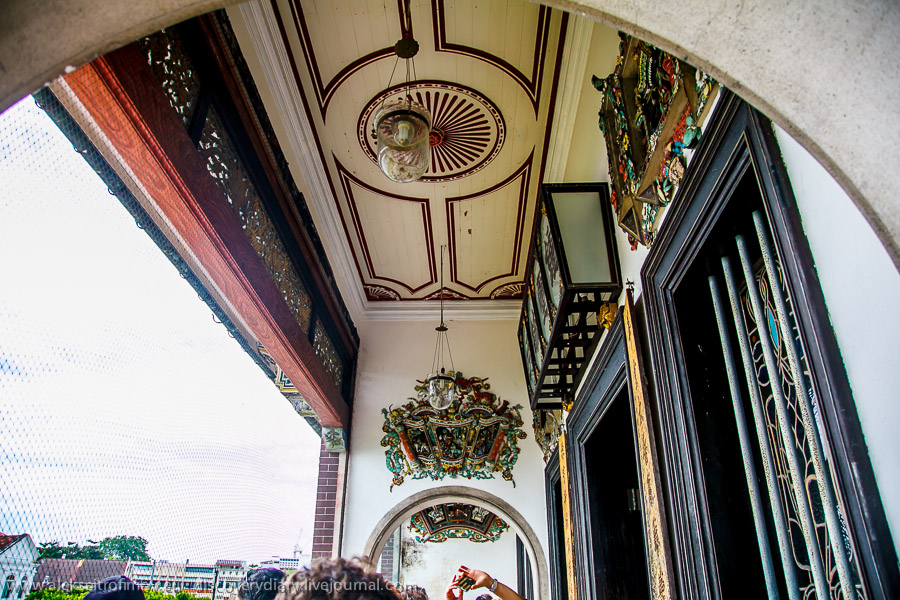 Local Malaysian visitors make up the majority of tourists in Penang. Penang has a particular fame in Malaysia as its culinary capital. In every Malaysian city you will see the offers of Penang laksa, laksa being a very juicy fish noodles soup featuring tamarind, lemongrass and many other ingredients. In Penang itself the tourists plan their days around meals, trying to fit in as many as possible – some eat six times a day! The size of the portions, usually small as you can’t eat too much in this heat, favours this consumption pattern. The basis of the Penang culinary glory is the Straits Chinese heritage, so-called nyonya cuisine.

Another local speciality, curry mee soup, with noodles, seafood and egg. Costs practically nothing in a huge open air food market right next to the Blue Mansion. 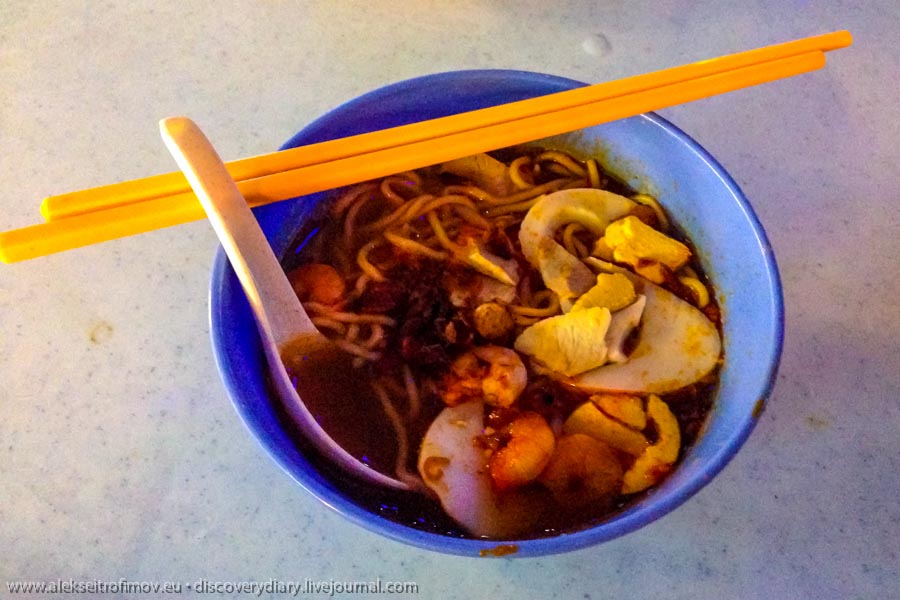 A whole celebration of tastes in one of the locally famous Peranakan restaurants. The “black soup”, which is how it is referred to on the menu, includes prune, mushroom and big chunks of fatty pork. The other dishes are giant shrimp and squid in local sauces, as well as particular local beef. 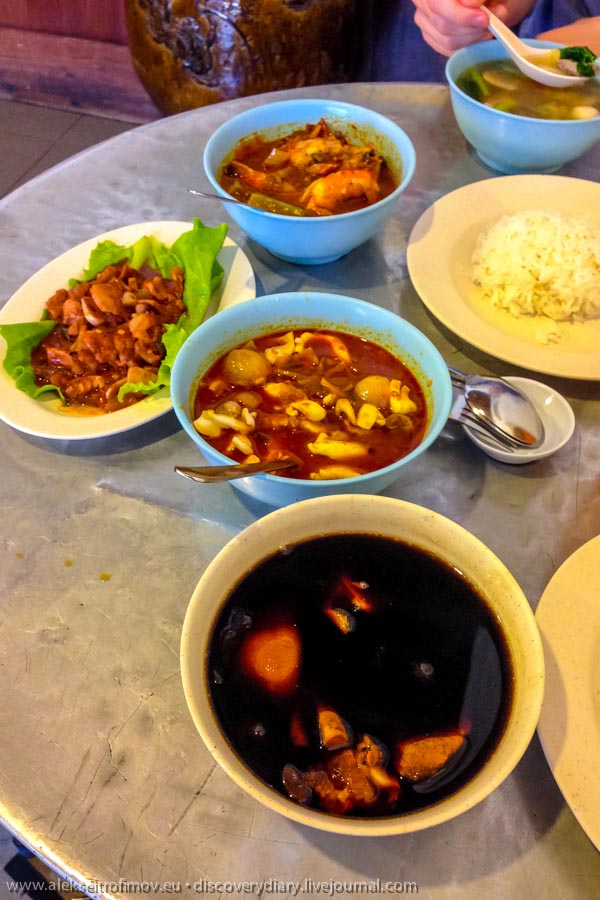