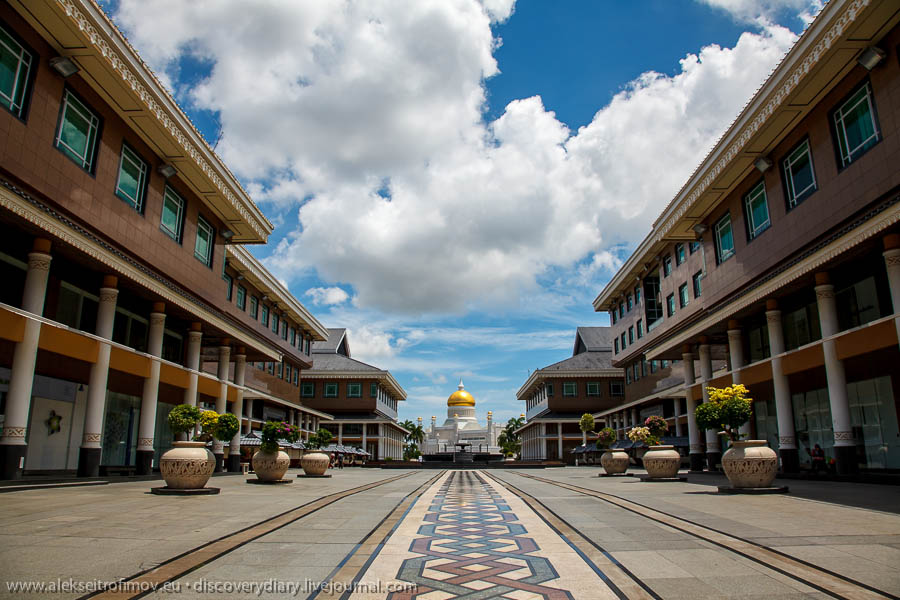 It so happened that I was in BSB on a Friday, a day (mostly) devoted to prayer in line with a recent Sultan’s decree. In reality the ban on working is enforced from 12 to 2. During that everything is closed, including restaurants and cafés. Therefore I decided to use the time to explore on foot the main local sightseeing attraction – the floating village. Actually most of the settlements surrounding BSB are “floating” in that they are buuilt on water. You can reach them easily using these kinds of lanes. 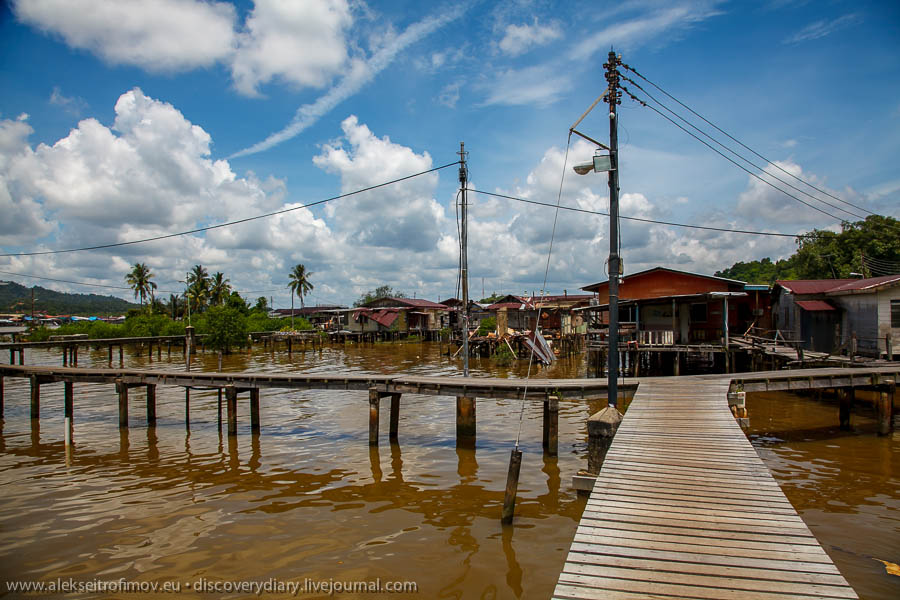 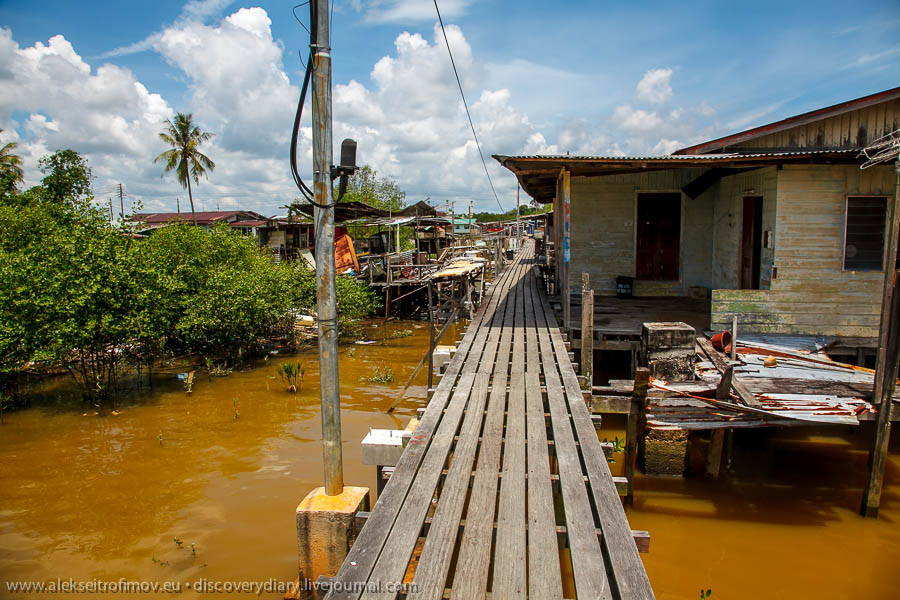 An elevated bridge connects two floating settlements so that larger boats can pass underneath. 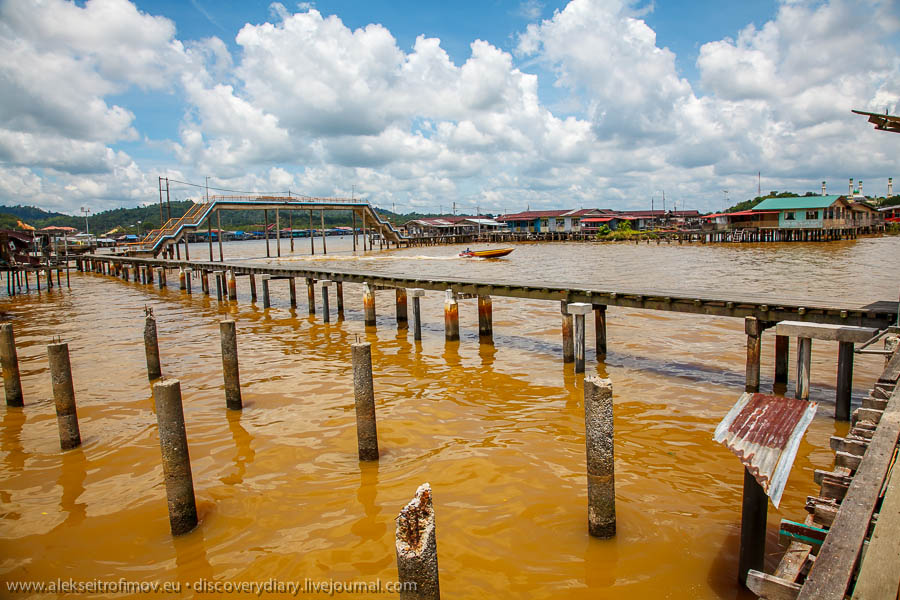 The view from the bridge to the BSB centre. 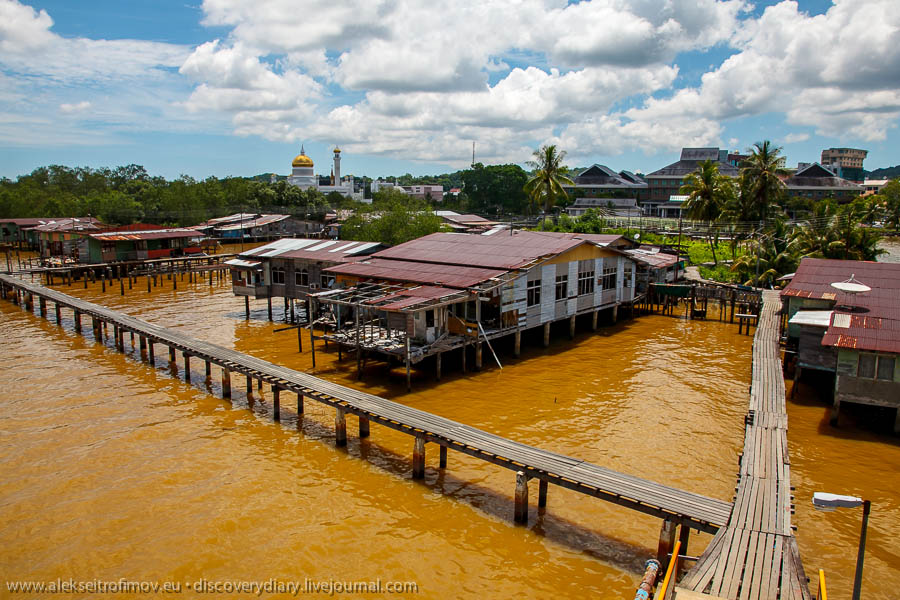 While I was making photos, a boatman approached me and insistently and passionately offered me a boat tour of Brunei. All this despite the Muslim ban on working at that time. I was morally prepared and even aware of the price level, so we quickly stroke a deal. My future boat is approaching in the lower left corner of this photo. 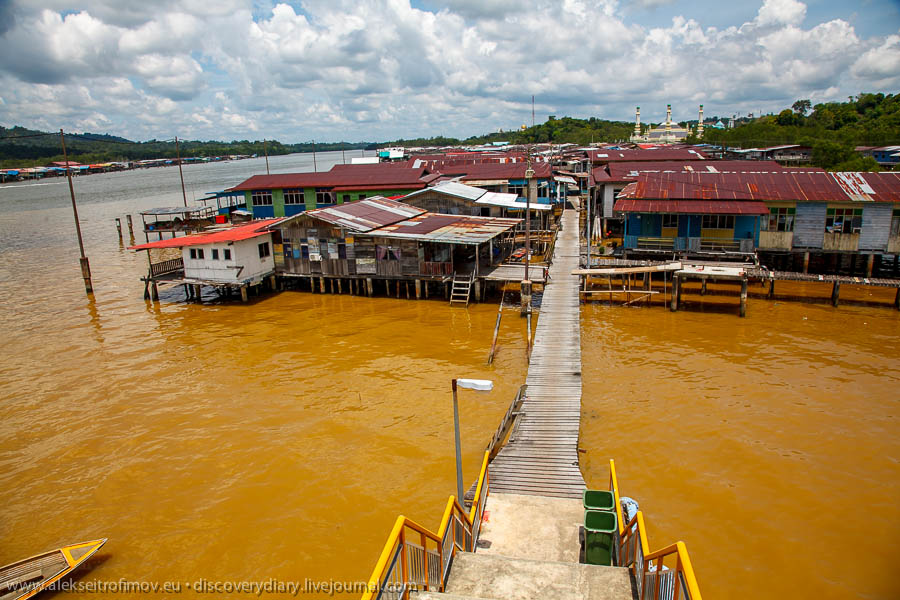 The motor boat takes me down the main artery of BSB, the Brunei River. 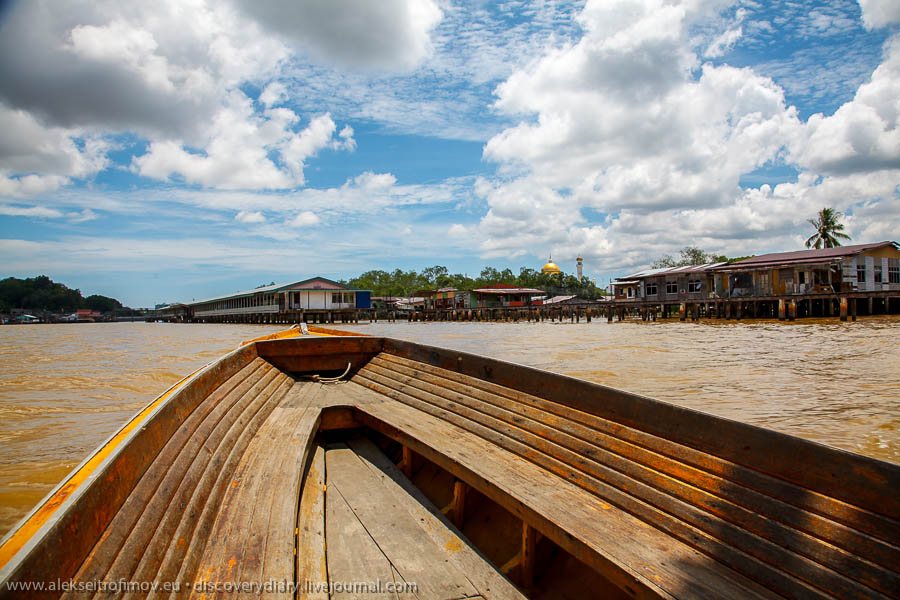 First thing was to take another look at the main mosque and the luxurious surroundings. 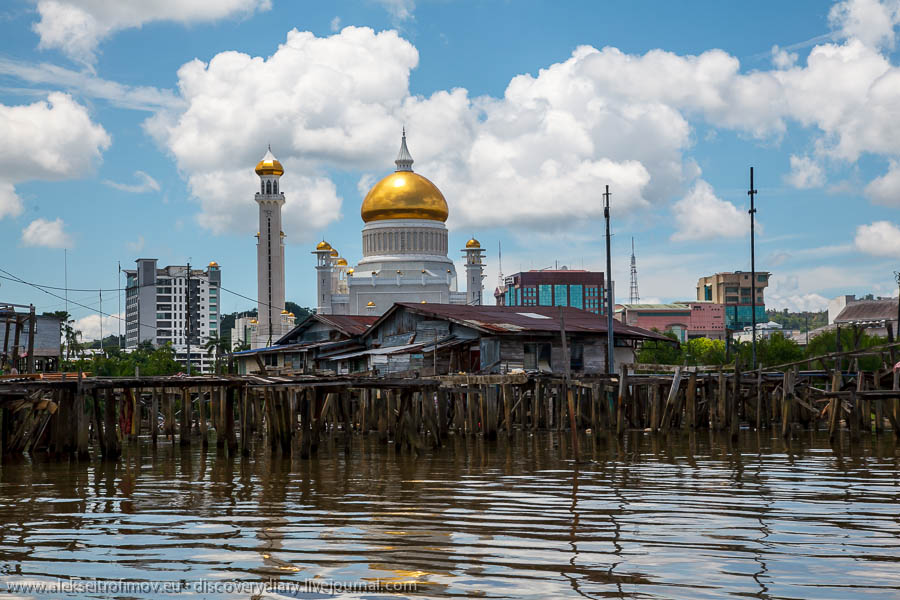 A medrese – the centre of Muslim learning – is facing the mosque on the other side of the channel. 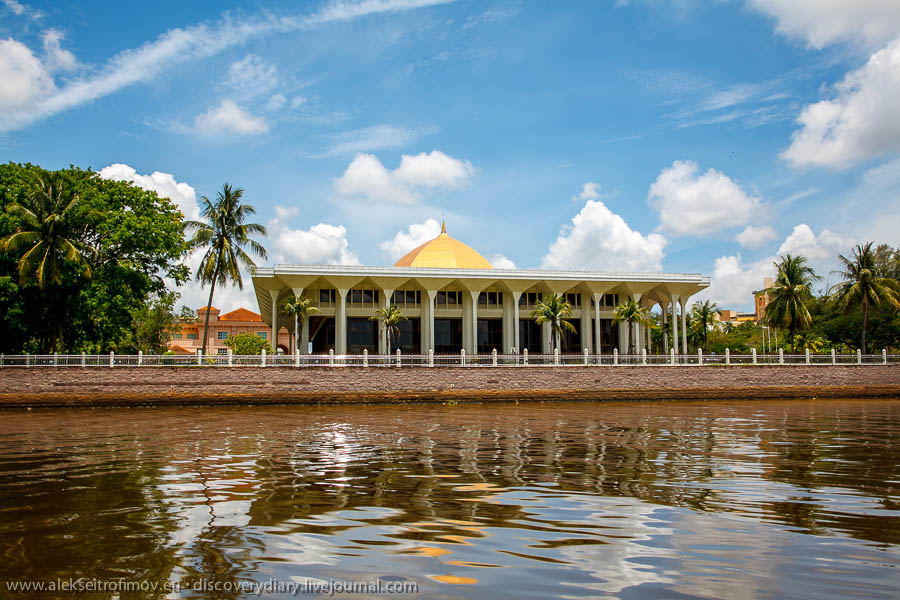 This mosque is even more important – indeed this is Brunei’s main mosque where the Sultan delivers his prayers. It is larger and is next to the Sultan’s palace – some way off the centre of BSB. 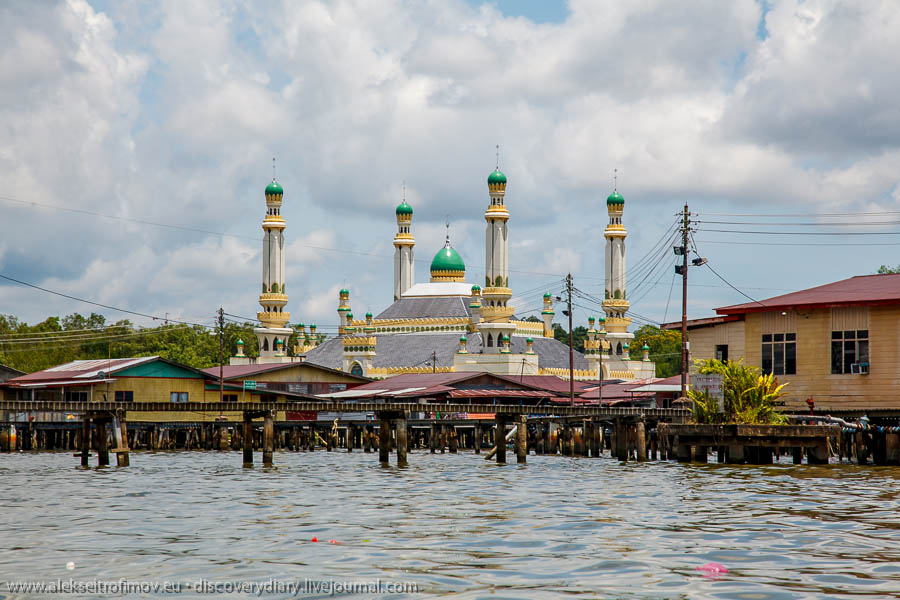 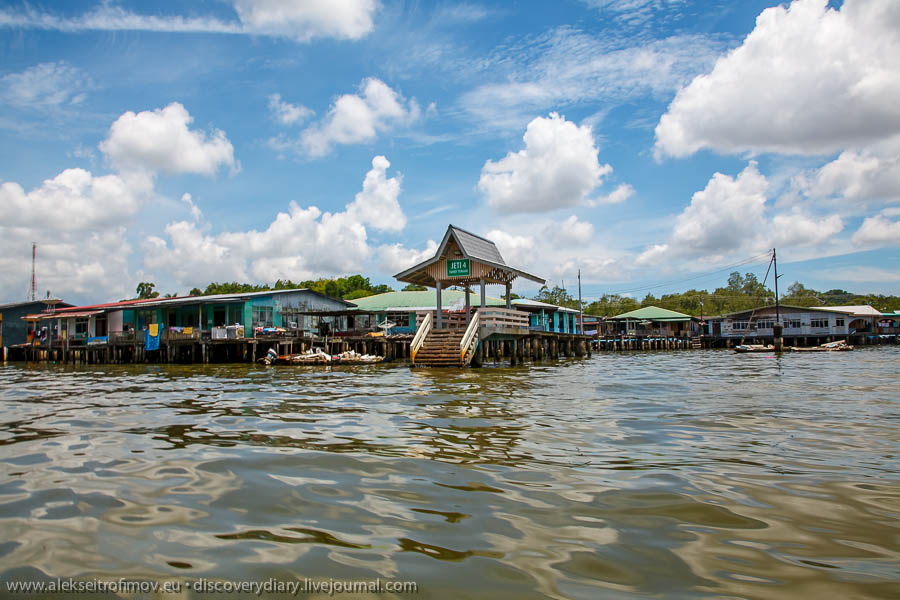 The boatmen explained to me where the best fishing places were. Fishing is still his main trade. This rock is called Titanic – from a certain angle it looks like a sinking ship. 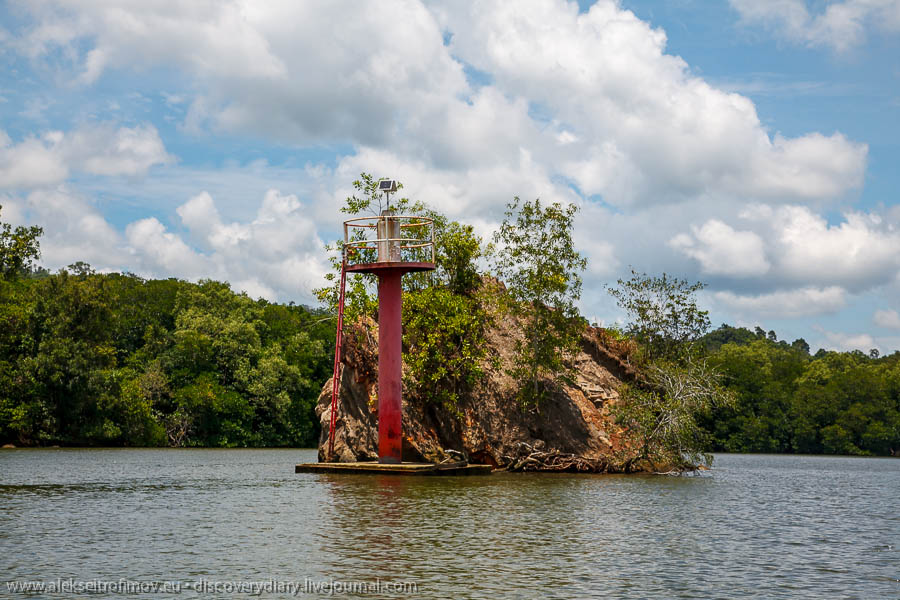 What is going on here exactly? This huge edifice hidden inside the jungle is the Sultan’s palace. The cost of this caprice is about 1 billion USD. According to those who have visited it, the palace is characterised by that special sort of kitsch which accompanies every nouveaux riches residence. It is actually open to visitors once a year, but this didn’t coincide with my visit. 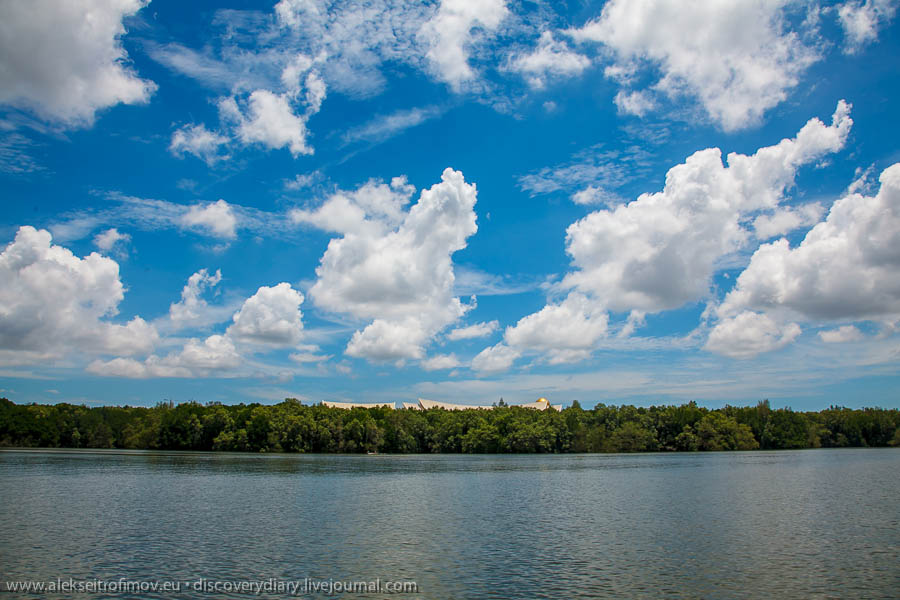 The boat takes me further West up the Brunei River. 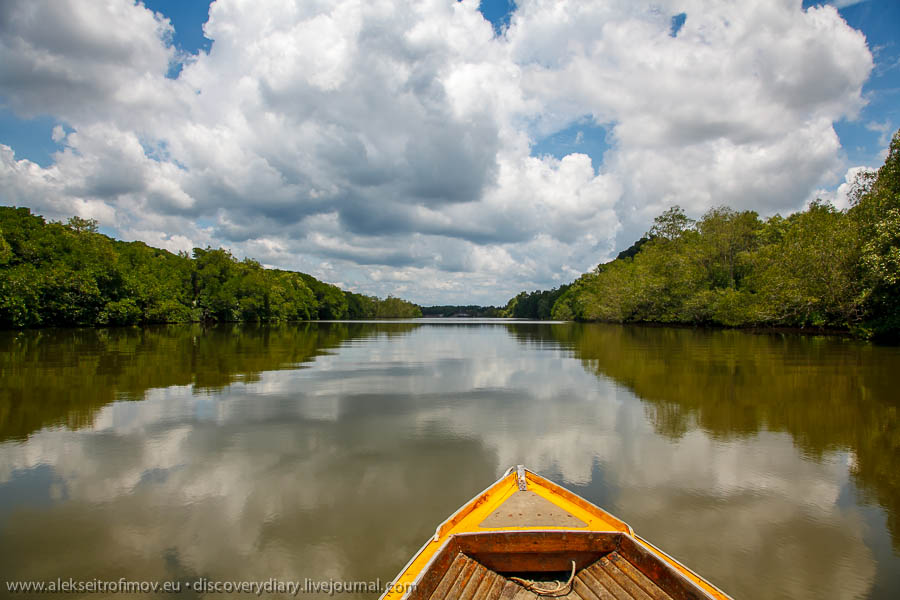 Curious animals greet us on the way. 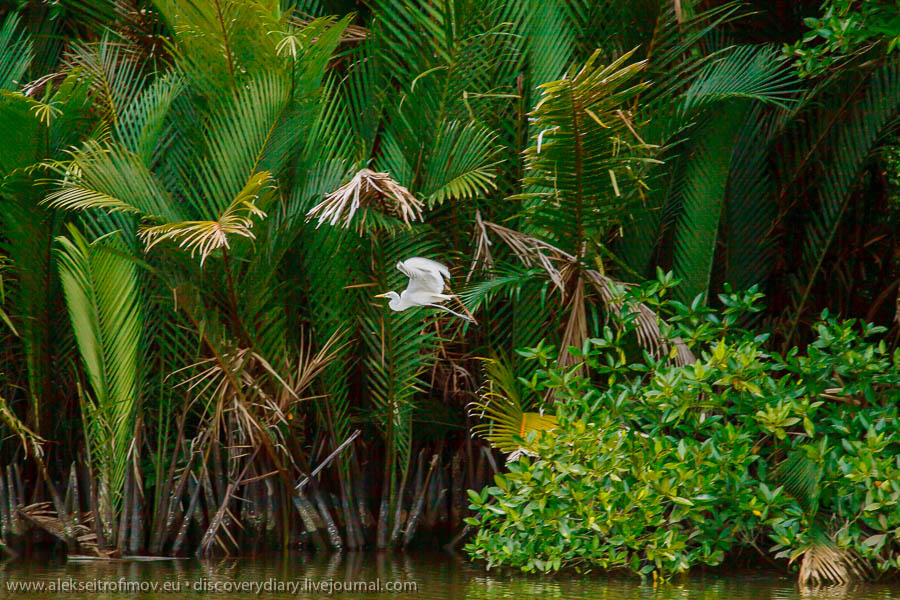 Finally we reach a bush that is the goal of our trip. It is known for the rare proboscis monkey. Actually I’ve already seen them during our visit to Bako National Park in Malaysia. In Brunei they are the number one local fauna rarity, so I paid them a visit anyway. 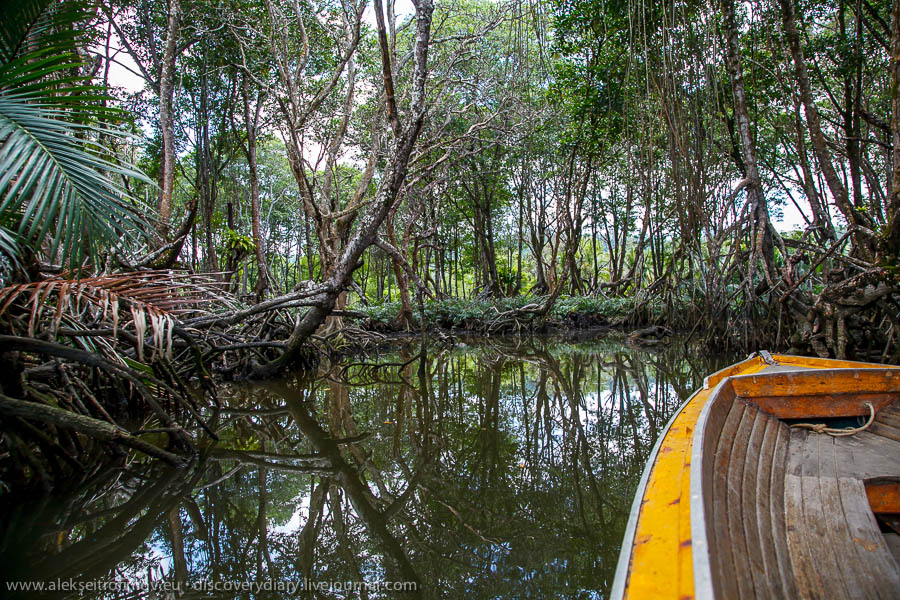 The monkeys indeed made a number of furtive appearances in the thick greenery of the trees, but were too quick for me to capture. 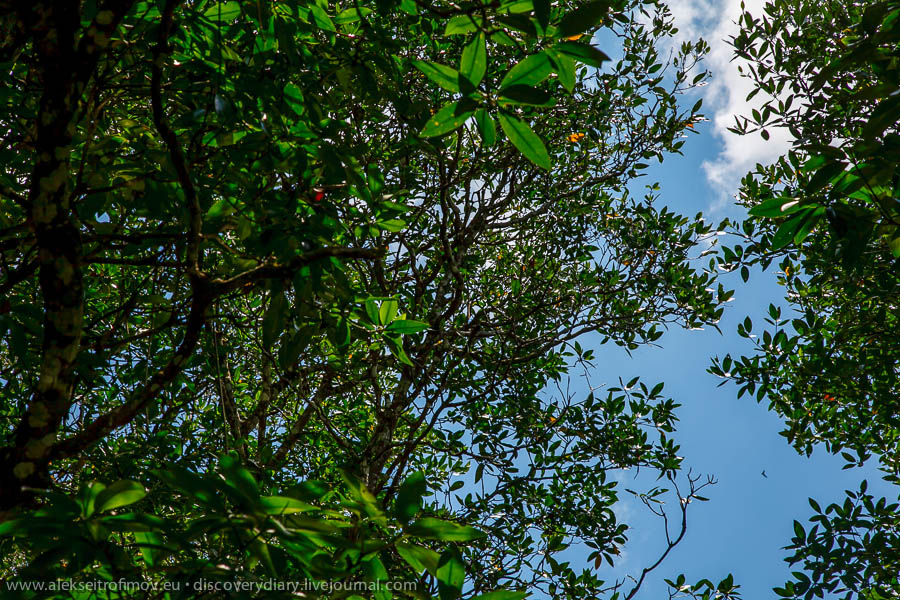 On the way back my guide pointed to this mausoleum, which holds the earthly remains of the previous Sultan, the founder of the Brunei as it is and the father of the current ruler. 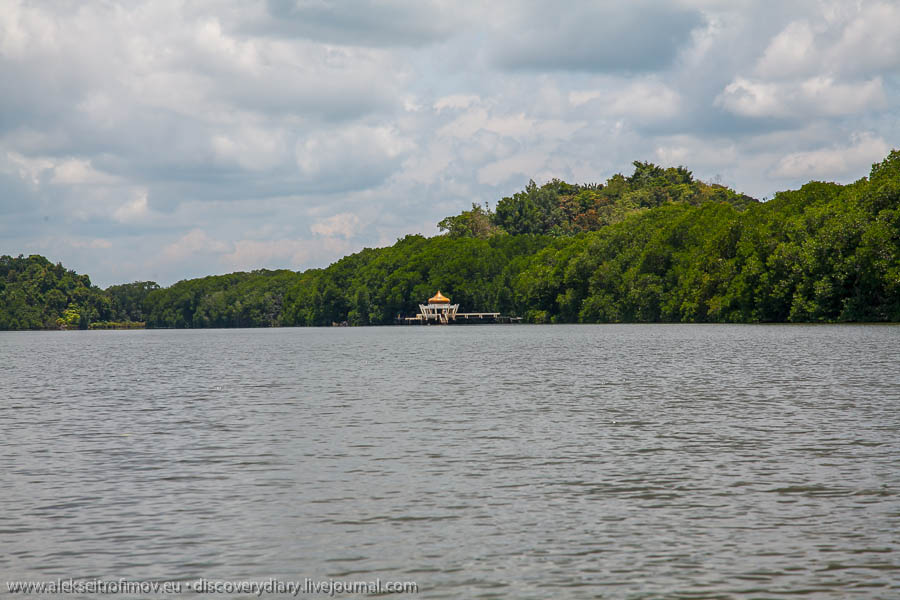 The boatman explained to me that he himself was born in one of the floating villages and his family still lives there. I was shocked by the subservient way in which he described various petty giveaways offered to the population by the Sultan. It did not seem to occur to him that the oil wealth really belonged to all of the Brunei people. On the contrary, the fact that the Sultan shared even a tiny part of his wealth seemed a sign of great kindness to him. It must be said that the Sultan’s actual lifestyle could not be more different from the strictest form of Sharia morale that he prescribes for his subjects. Alcohol is forbidden in Brunei but it flows like a river behind closed doors of the Sultan’s palace. His agents scour the world looking for beautiful women to his taste, bring them to Brunei in private planes, thus creating a private harem for the ruler and his closest male relatives. When he travels the world, he rents entire hotels for himself and his retinue, where they consume cocaine like sugar – a sin punishable by death in Brunei, mind you. The incredible hypocrisy of these people can only be compared to their incredible weatlh. 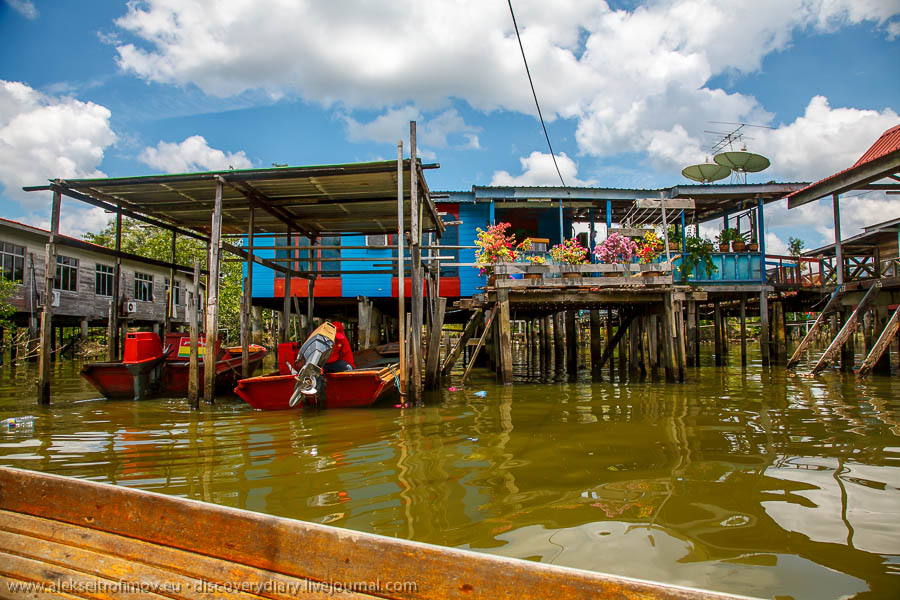 The view of the centre from the Brunei River. It is a very small place after all. 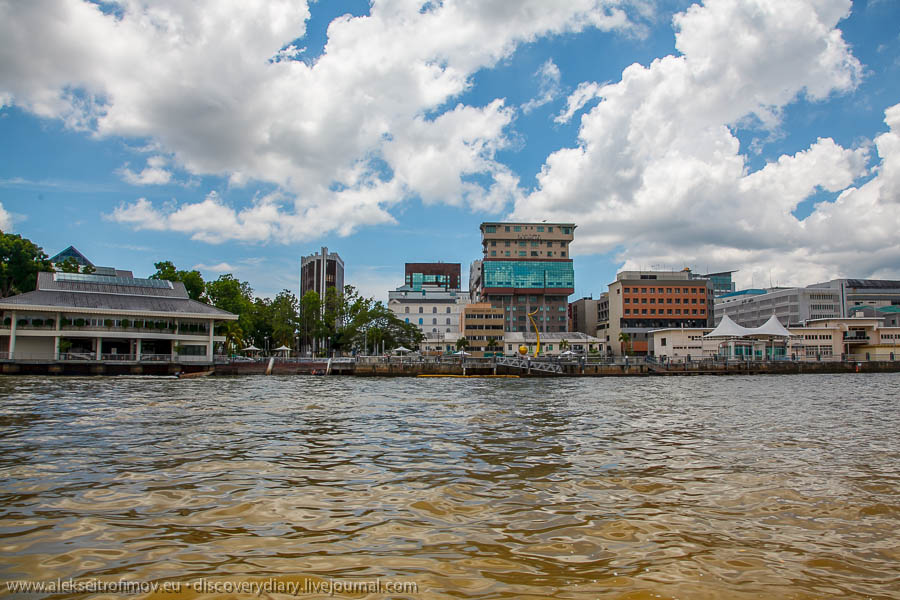 The same Omar Ali Saifuddin mosque. On this quai the boatman offloaded me. 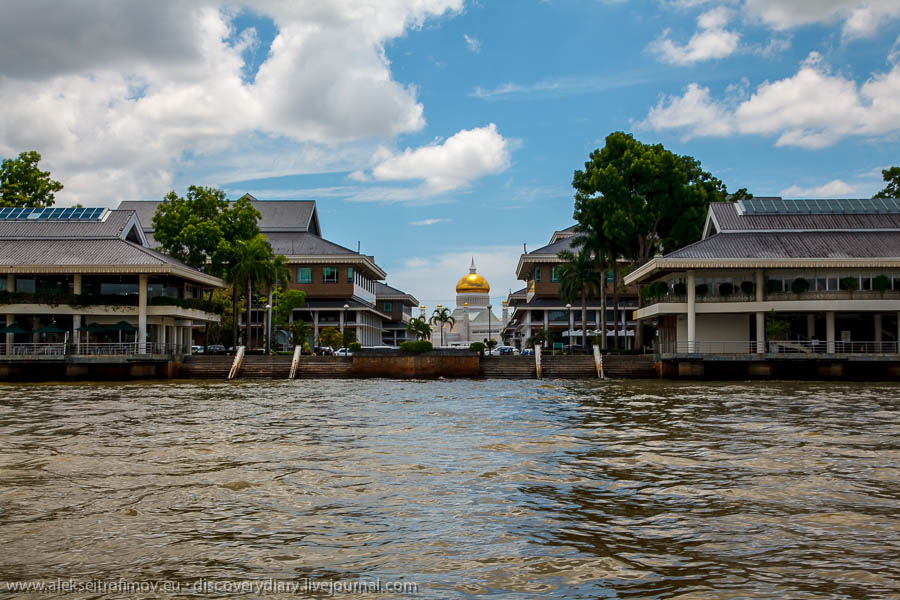 I wave him goodbye. 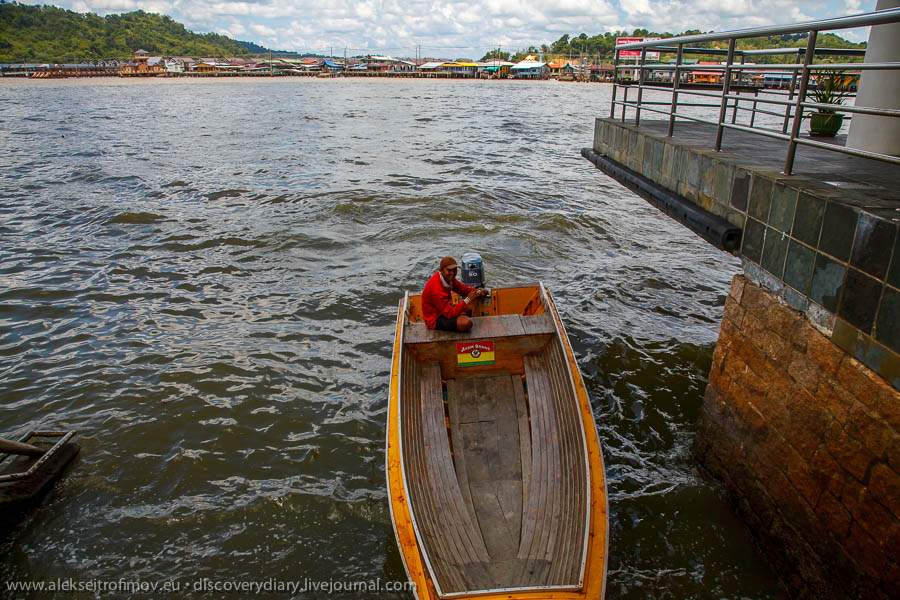 The main square of BSB, where the various celebrations in Sultan’s honour take place. 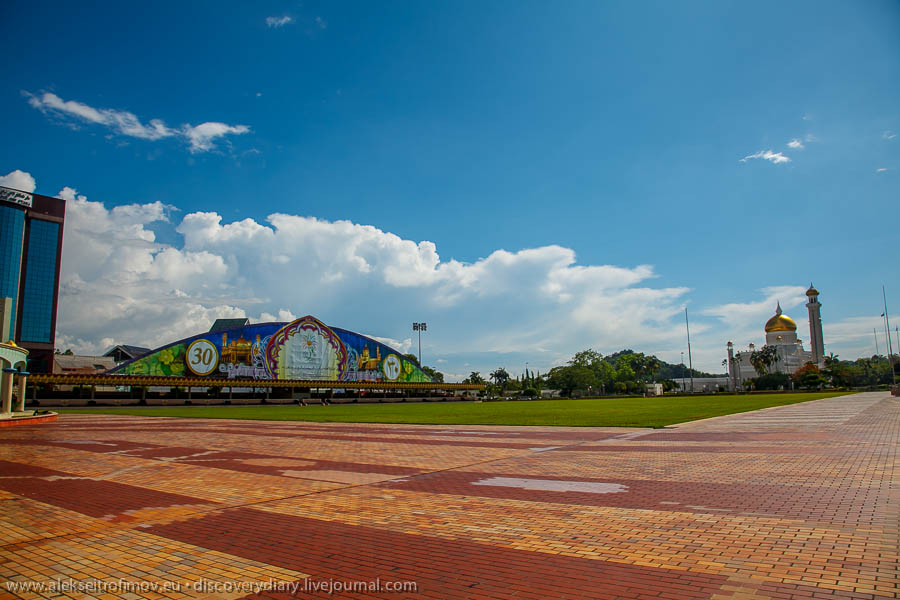 The so-called Royal Regalia Museum. One of the few curious places to visit in BSB. The guidebook promises a chance to see all kinds of gifts given to the Sultan by every thinkable world ruler. Indeed in the endless corridors presents from Fidel Castro sit next to Elizabeth II, Bashar Assad and Leonid Kuchma. The truly surprising thing in the museum though is the omnipresence of the Sultan’s portraits. In every imaginable pose, situation and age he looks at you from every wall, as if trying to outdo Stalin in the cult of personality stakes. A good place to ponder what the absolute power couple with absolute wealth does to a person’s mind. 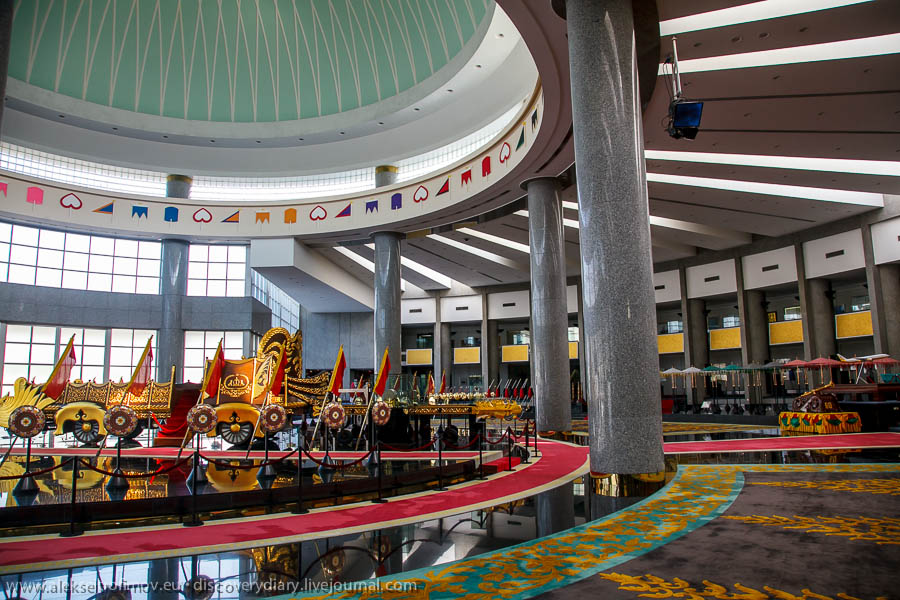 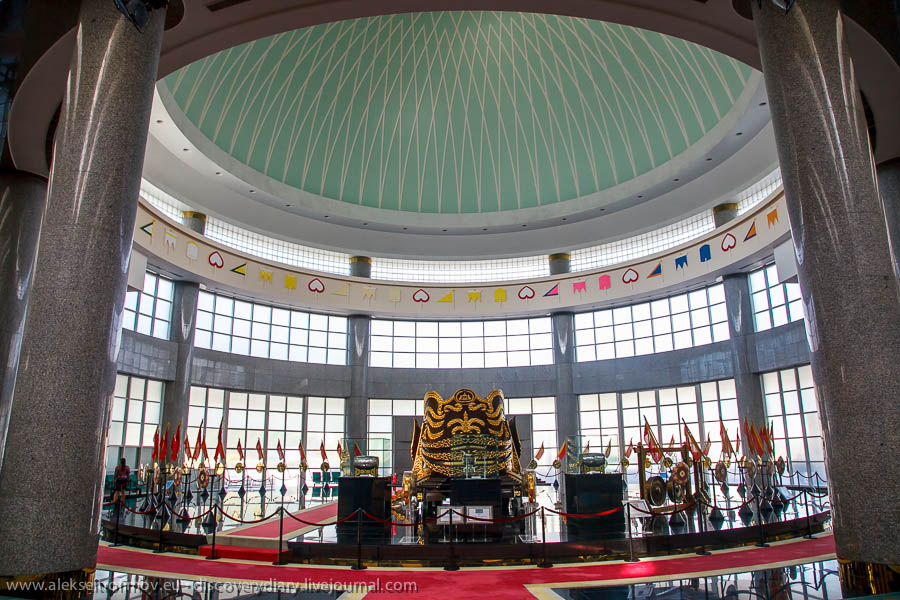 The mosque again. On Friday the infidels are not allowed in. 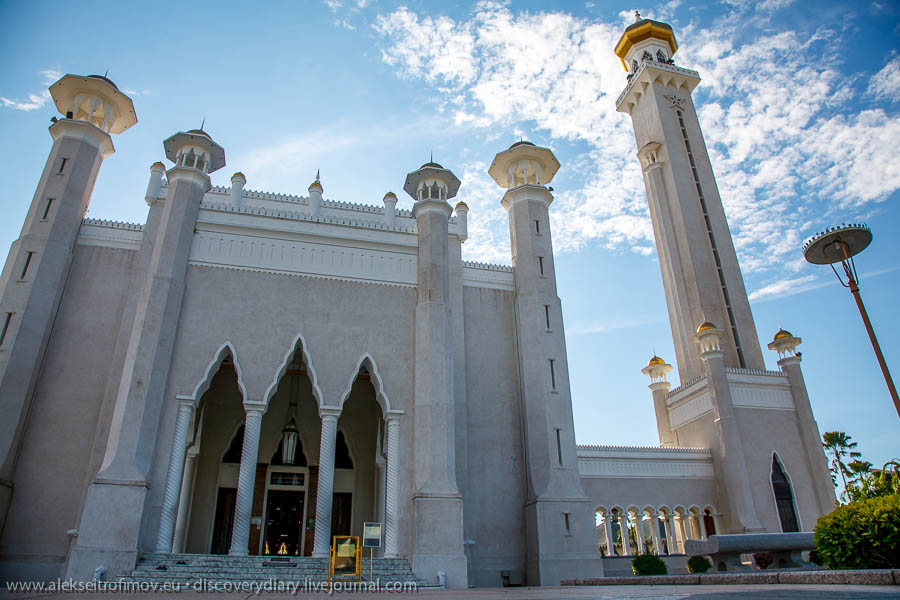 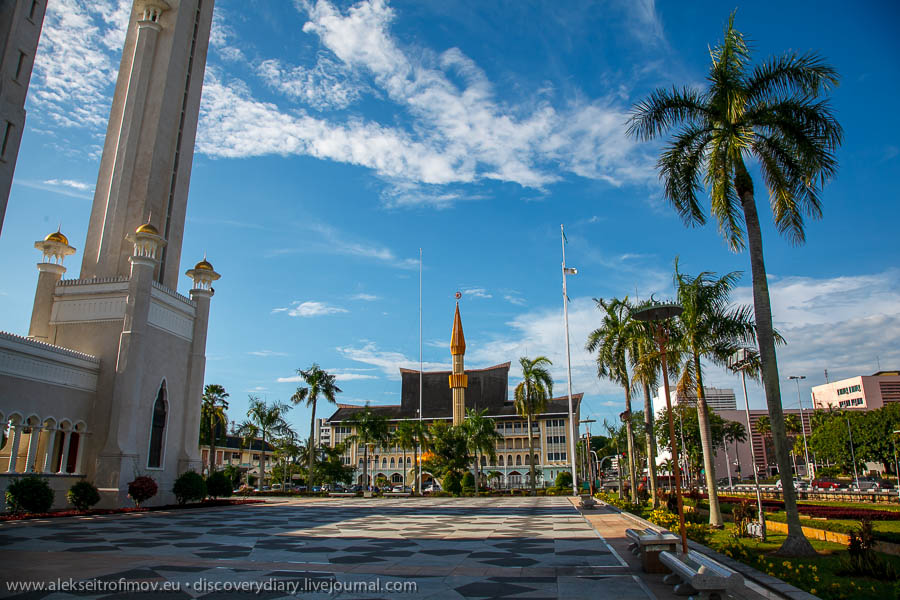 The mosque is surrounded by the gardens. 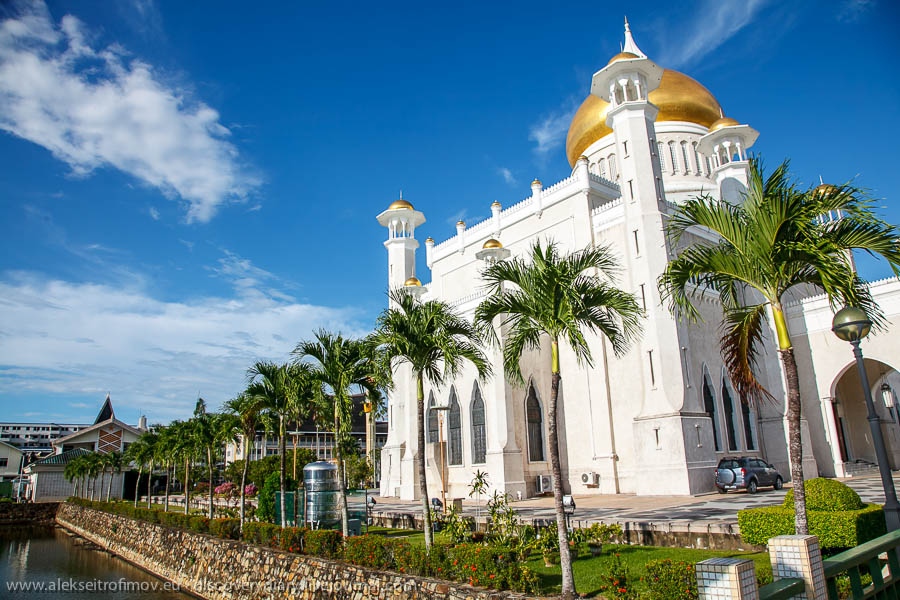 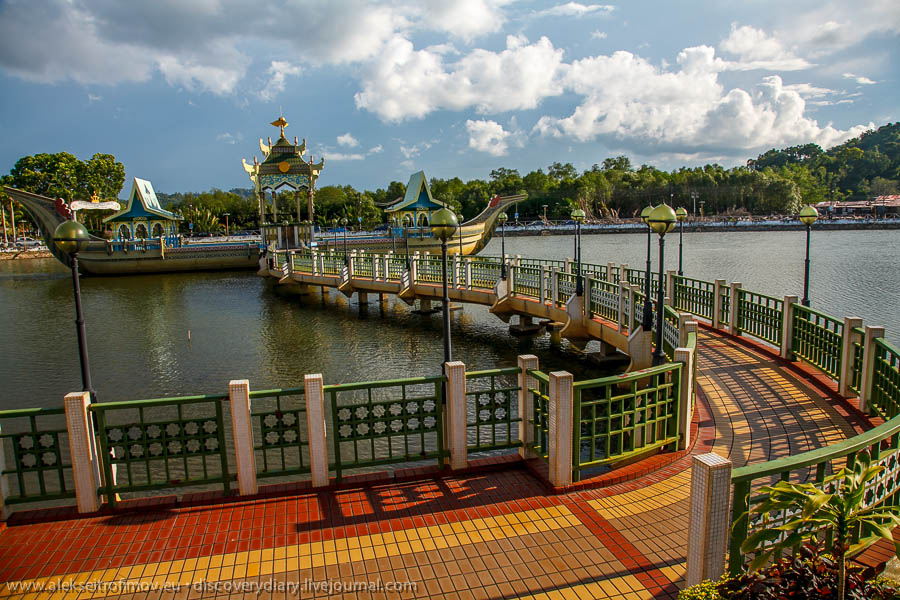 And finally a view out of my hotel window. One of the few lively places in BSB, a market where fresh produce is sold and where you can eat Chinese for 1 Brunei dollar – incredibly cheap for generally expensive Brunei. 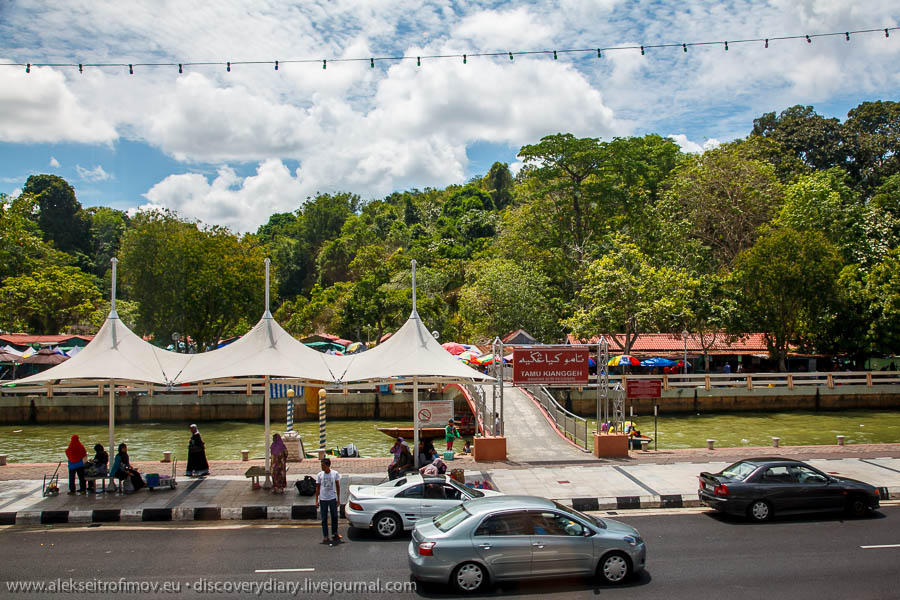 One thought on “Paradoxical Brunei”