Coming back from the Salar de Uyuni feels like returning from another planet. Several days with no contact with the outside world, no internet or GSM, is quite an unusual experience for this hyperconnected world of ours. And a very refreshing one.

After Uyuni I had a long sequence of physical movements – first I took a bus from Uyuni via Potosí to Sucre, then a flight from Sucre to tropical Santa Cruz, Bolivia’s largest city. In Santa Cruz I spent several relaxing days. From there I took an overnight bus to the Republic of Paraguay. The bus was described as overnight, but in reality it is more like a day and night bus, as it takes 24 hours to cross the subtropical desert of Chaco. At times we were covered with sand as the sand got through all the holes into the interior of the bus. Preoccupied with keeping my camera from sand, I did not make any pictures of the nightly Chaco. I kept following the circuitous route somewhere in the middle of Chaco using the GPS of my phone. The route had very little relation to the state borders drawn by politicians almost by hazard hundreds of years ago. The actual customs and immigration of Bolivia and Paraguay are in fact located many kilometres from the border on each side. So there is a pause of about 8 hours of the road inside Chaco between meeting the Bolivian officials and the Paraguayan ones. Chaco is virtually uninhabited, with the exception of several colonies of German-speaking mennonites. Mennonites are a particular Christian denomination, somewhat reminiscent of the Amish. They left Europe, including Russia, in 1930s. After many adventures in other places, eventually Paraguay gave them the deserted land in Chaco under favourable conditions, which for them meant complete freedom of religion as well as self-administration. The mennonites proved to be very hardworking and enterprising, adapted to Chaco’s difficult conditions and built an agricultural empire, centred on meat production, which today is an important part of Paraguay’s economy.

Finally around 3 pm of the next day I arrived in Asunción, the capital of Paraguay. Asunción turned out to be an unexpectedly pleasant and civilised city. The first impression it gives is cardinally different to that of Bolivia, which is dirty, poor and chaotic. On Asunción’s streets by contrast you see numerous expensive cars, the orderly taxis operate with a taximeter, and only the exotic money – the prices are measured in tens and hundreds of thousands of local guaranís – does not let you forget that you are in Latin America.

A friend of mine who works in Paraguay’s foreign ministry gave me a fascinating and very patriotic tour of Asunción. In his excursion his unabashed promotion of Paraguay (I am paid for it! he joked) combined with deep self-awareness. He also quoted to me from a book of Hannah Arendt he was reading at that time. As you can imagine, thanks to him my memories of Asunción are very positive.

Paraguay has a fascinating (and truly tragic) history. After gaining independence in 19th century, there was a time when it was the dominant country in South America. Then its president marshal López, himself a son of a previous president, got so inspired by his trip to Europe that he imagined himself to be the Napoleon of Latin America. After Brazil intervened in an internal conflict in López’s ally Uruguay, he declared war on Brazil, and then found himself at war also with Uruguay (where the government changed) as well as with Argentina (linked to Brazil by a secret pact). In effect he was at war with all his neighbours at once. The result of that war, referred to as the War of the Triple Alliance, was a veritable catastrophe for Paraguay. About 90% of its male population was killed. It lost about half of its territory. Before dying at the hands of the Brazilian soldiers, marshal López theatrically shouted “I die with my country!” – as he believed that Brazil and Argentina would erase Paraguay from the map altogether and simply divide its territory between them. But the Brazilians decided that it suited them to have a buffer state and so Paraguay persists.

As my friend explained to me, there have been essentially two Paraguays – one before that war and one afterwards. These two Paraguays have little in common. The first one is a powerful country systematically growing its economic strength, building railroads, maintaining the continent’s largest army, installing progressive economic reforms. The second one is a God-forsaken Latin American country, ruled by the motto “Ya da ya”, roughly meaning “It’s ok, there is no rush, it will be fine like this, don’t worry”. It must be said that Paraguay’s climate rather favours the latter motto. When I was there it was winter, which meant a 35-degree heat during the day. In summer the thermometer routinely hovers around 50. This heat exhausts you and prevents any meaningful action. 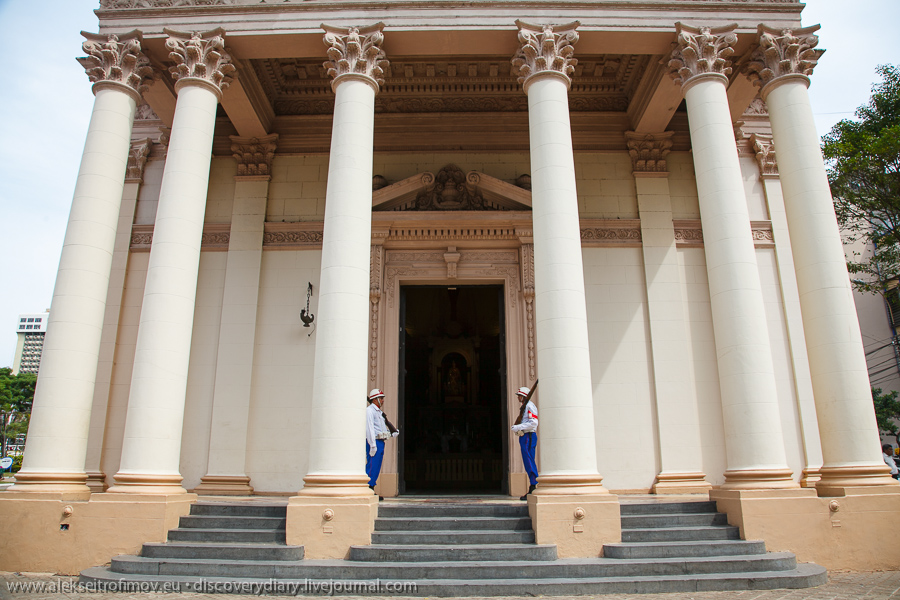 The Pantheon of Heroes of Paraguay. Even in death marshal López mimics his hero and lies there just like Napoleon lies in Les Invalides in Paris. 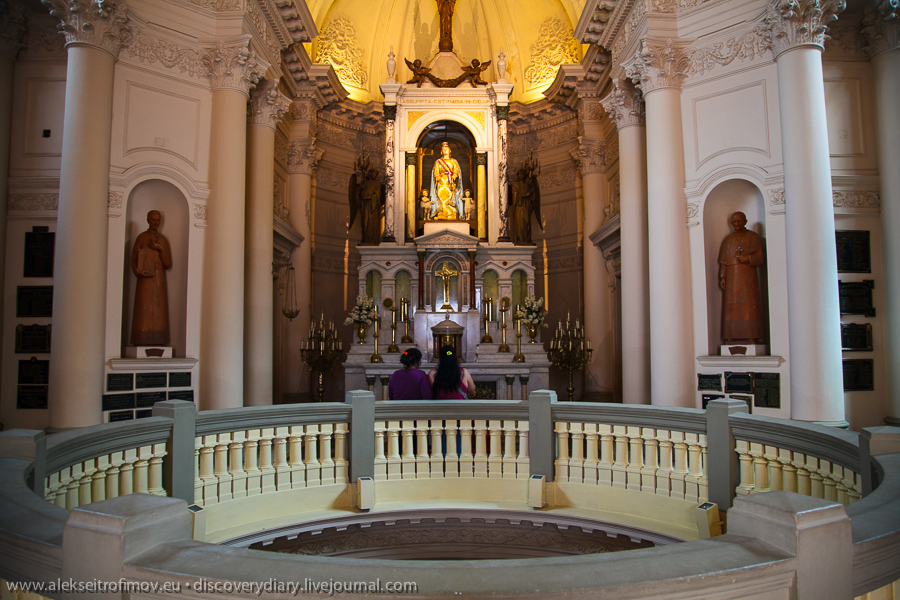 Although to be fair the central space is occupied by the tomb of an anonymous Paraguayan soldier. 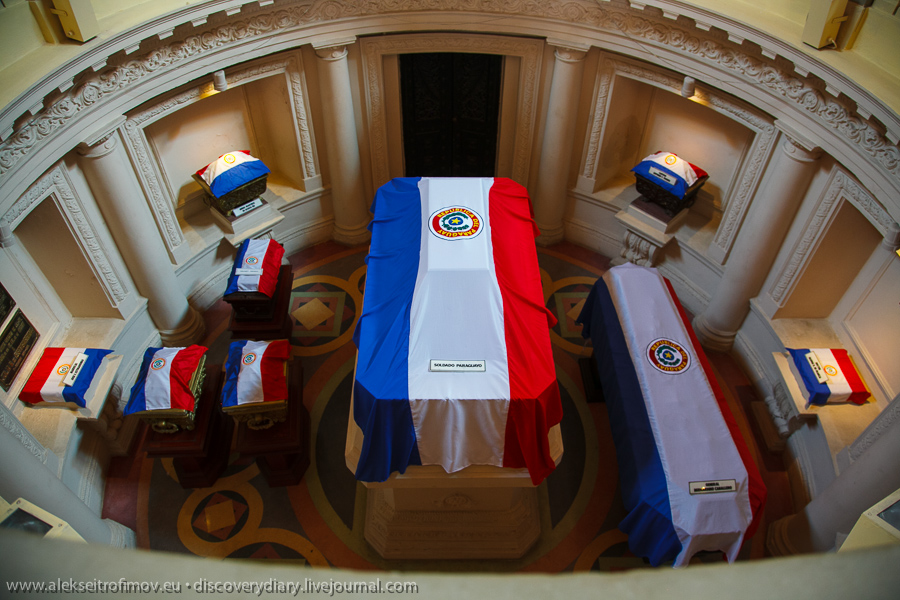 The view of the street from inside the Pantheon, and a popular bar called Lido. 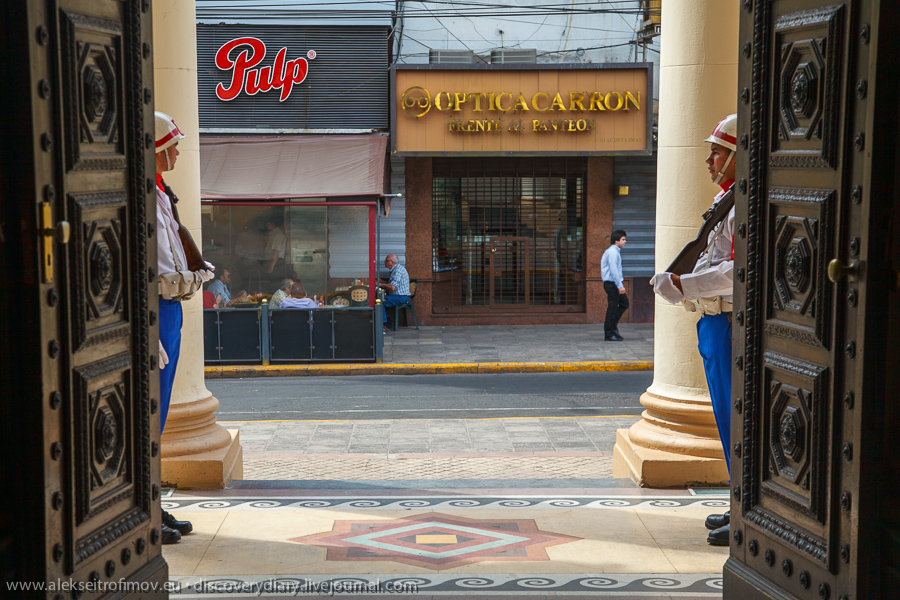 The architectural emblem of Asunción, Hotel Guarani Esplendidor, a modernist building from 1961, the contemporary of Niemeyer’s creations in Brazil. 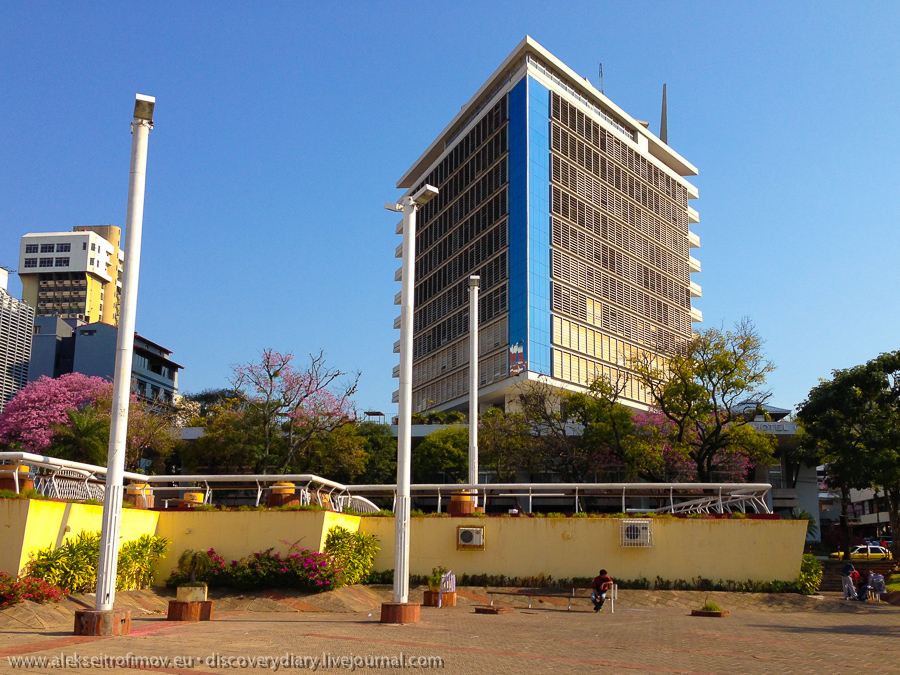 Casa Independencia – where possibly the secret meetings of the leaders of the rebellion took place before declaring Paraguay’s independence from Spain. Possibly – because as my friend explained to me, in Paraguay the historical facts have a very relative nature. Perhaps these meetings took place in this house, or perhaps it was simply convenient to place the museum in this house, or perhaps there were many buildings where these meetings took place. In the same way the remains of marshal López in the Pantheon possibly – likely – are not his remains at all, but anonymous remains meant to remind of him. 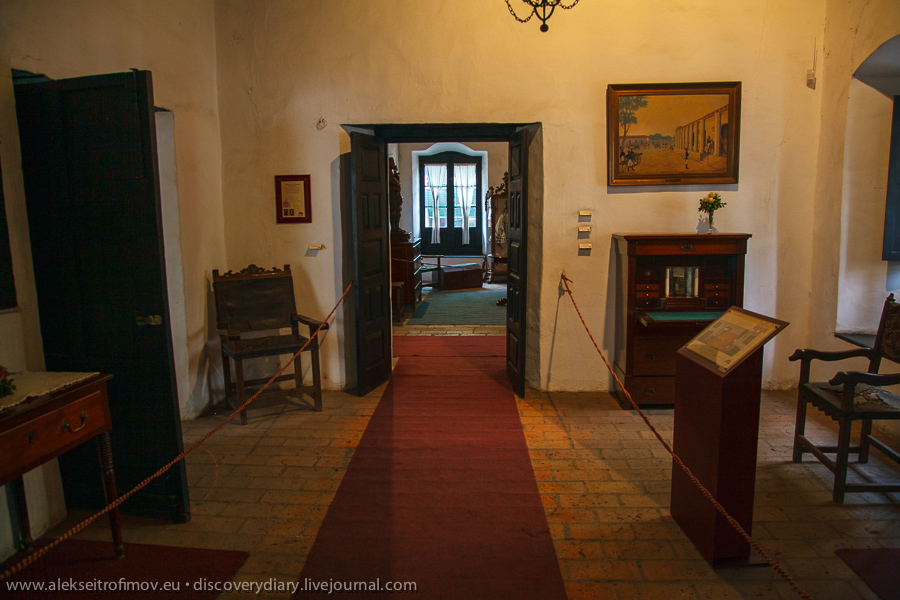 Paraguay was the very first colony to obtain de facto independence from Spain, in 1811. Other colonies declared independence earlier, but the Spanish either suppressed the first rebellions (like in Bolivia) or kept on fighting them past 1811. 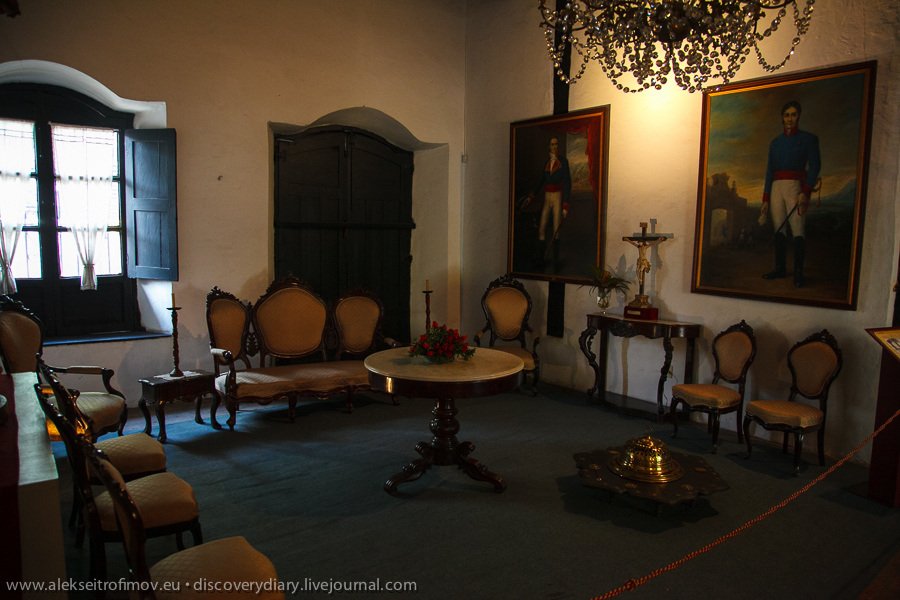 The courtyard of Casa Independencia, full of sunlight. 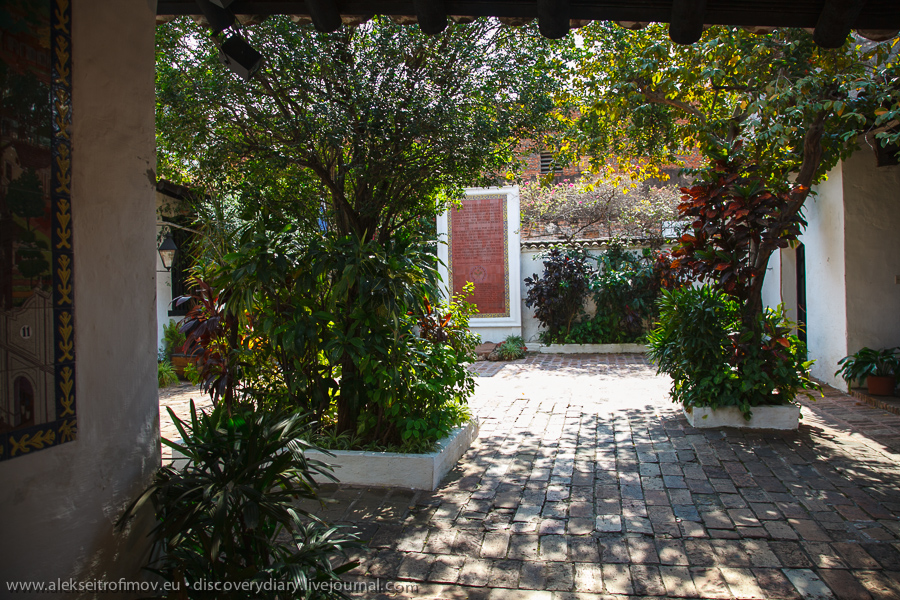 Palacio de los López (which literally means Palace of the Lopez’es) today serves as the President’s residence. The whole security detail are the two men in black in front. Not only the palace, but also the main street of Asunción bears marshal López’s name. To me it seemed paradoxical how this megalomaniac who practically led his own country to destruction is still seen by the people as a hero. Military history dominates the street names of this city – almost every street is named after some marshal or general or admiral, and their military title features prominently. 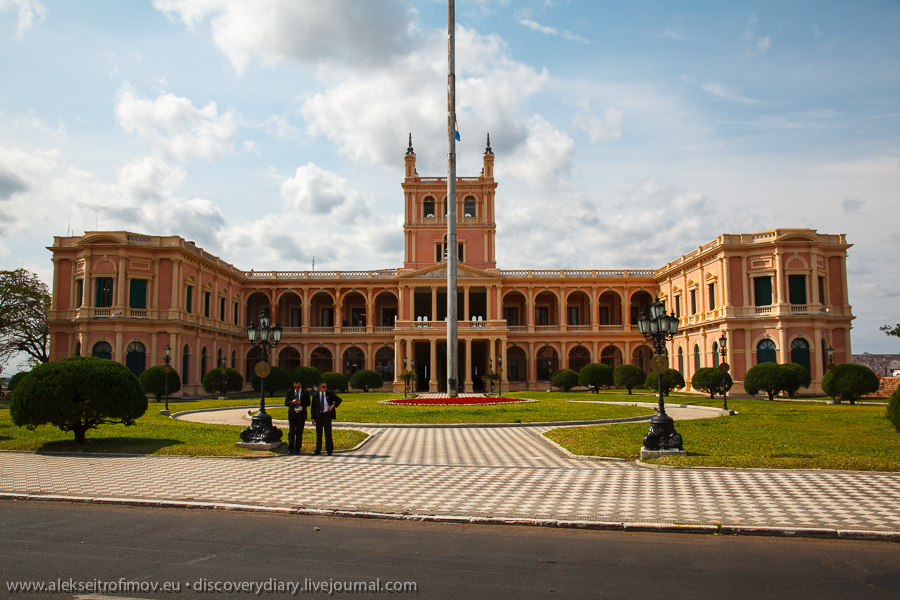 The building of Cabildo (city hall) on the main square of Asunción. 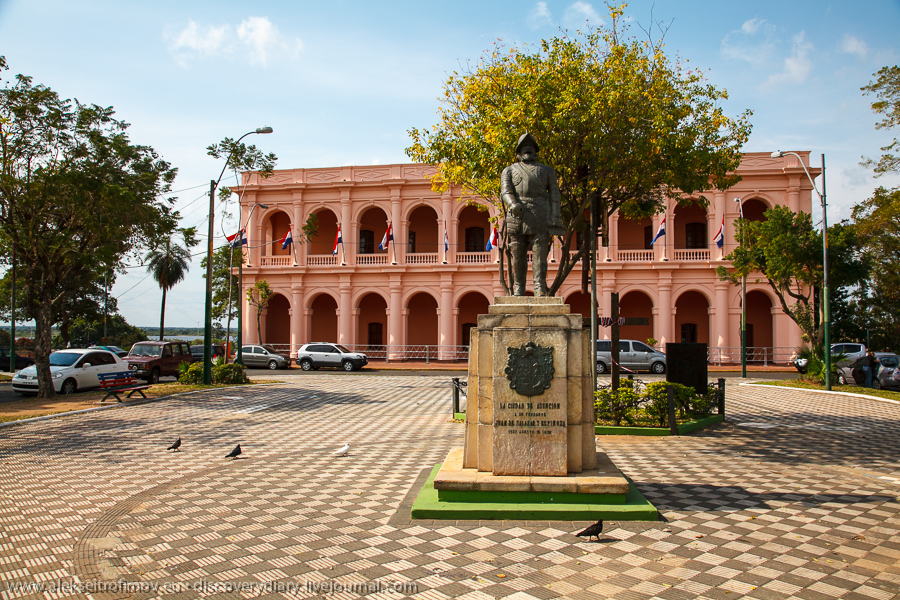 And right behind it is this view. This is a poor area, favela style, where I was categorically not advised to go with my expensive camera. Looks very picturesque anyway. 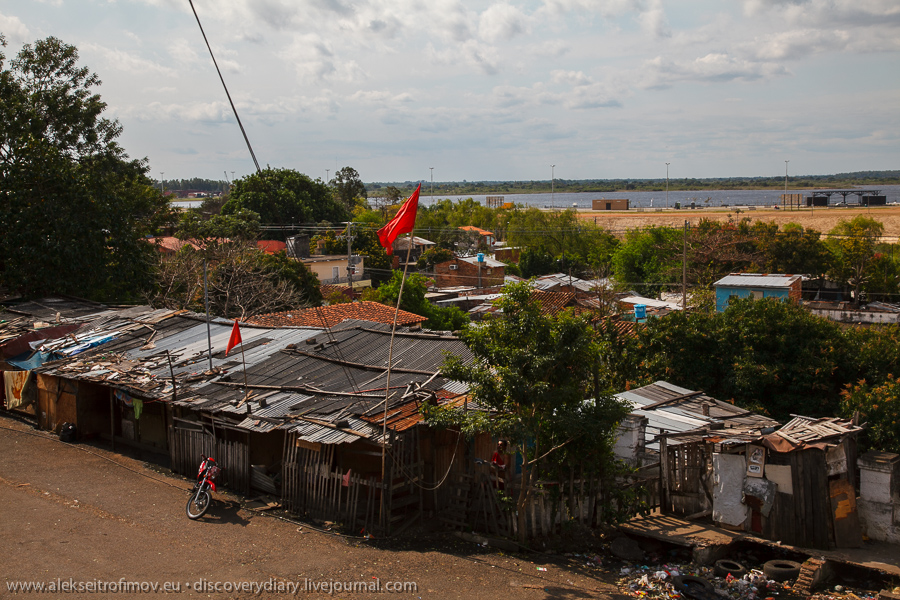 Rio Paraguay behind it, the main artery of this part of America. 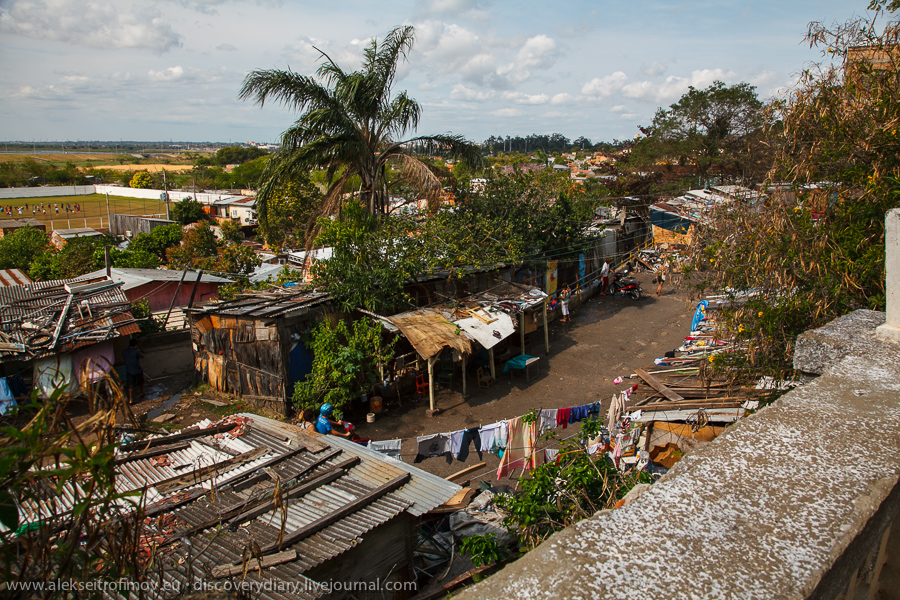 One thought on “Asunción”