I spent two weeks in Buenos Aires. These two weeks surged past me like the wind, at times the cold kind that makes you shiver, at times warm, as if hugging you. Buenos Aires is not the kind of city where you would carry a huge camera with you all the time. That’s why its story is by necessity eclectic, with photos made by Canon 5D Mark II, by iPhone, and sometimes without any photos all. Who photographs in a nightclub anyway.

My relationship with Buenos Aires
I have a little bit of a love/hate relationship with Buenos Aires. I so desperately wanted to fall in love with it that it probably had no other choice but to disappoint me. Like a spoilt beautiful boy, at times it seemed quite indifferent to me and even gave me some tough love. But at other times it gave me totally absolutely incredibly amazing presents.
Buenos Aires is a myth and a reality that came up as a conversation topic with many people. In some way it was a key city of my Latin American trip. Travelling in God-forsaken corners of Peru and Bolivia, I always felt that at the end of the day my ultimate destination was located due South East. Madonna’s refrain from the famous musical was playing in my ears: I wanna be a part of B.A. Buenos Aires, Big Apple!

Many of my correspondents were quite negative about it. I often read blogs to get inspired before going to some place, as it gives a different flavour to it compared to what you get out of guidebooks. For example the blog of Jeremy Halligar, a black gay man from New York, told the story of how he fell in love with BA, sold his New York flat and bought an apartment here, but eventually came to hate it. My boss who has been all around the world was describing porteños as hysterical, just like Italians from whom they are descended. An American solo traveller Jacob, who I met in Peru, was telling how unsafe and insecure he felt in Buenos Aires in contrast to the rest of Argentina.

In some way they were all right.

But for every hater, there was a lover.

In BA I met a gay American lawyer from New York who abandoned his crazy career a couple of years ago, moved to BA and never looked back, teaching English and other things. On another blog that much inspired me, http://www.bootsnall.com/, I read how the couple thought that spending a longer while in a place was the best decision they took on their year-long RTW trip. And their best month was the one they spent in BA renting a flat. I did exactly that.

Casa Rosada
Casa Rosada is the residence of the President of Argentina, overlooking the main square of the capital. The name of course means “the Pink House”. Apart from the obvious parallel to the White House, the Pink House also reminds me of Argentina’s long history of powerful women playing central role in the political life. Today of course it is occupied by the beautiful Cristina Fernández, although in Argentina it is common to berate her (and reelect).

The pink colour of the walls was historically due to the fact that the paint was mixed with ox blood to make it more stable. Today this is no longer done, but the colour remains.

The Pink House can be visited on a free guided tour. On weekends tours depart every 15 minutes.

Inside the House is not always pink, for example Cristina’s wing looks like this: 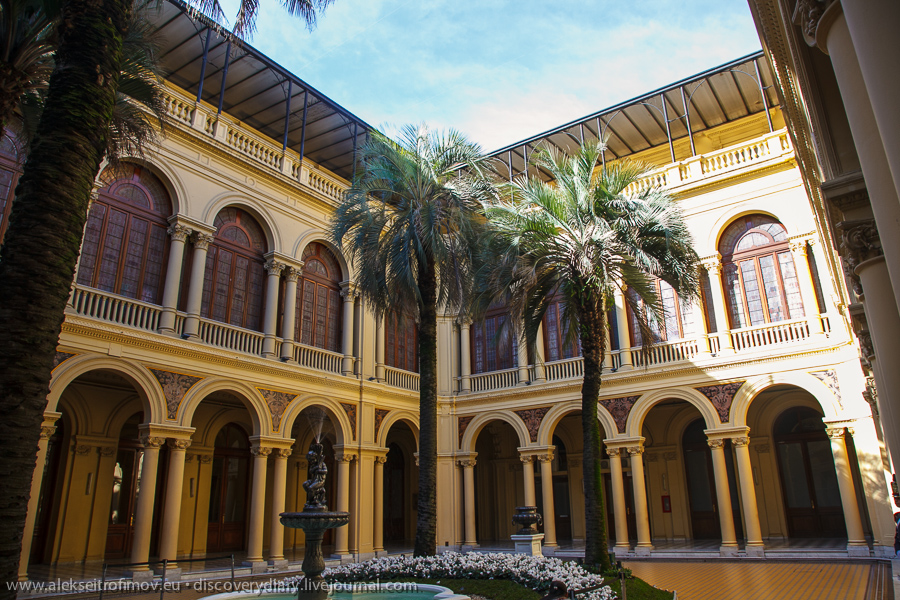 The view from an internal balcony: 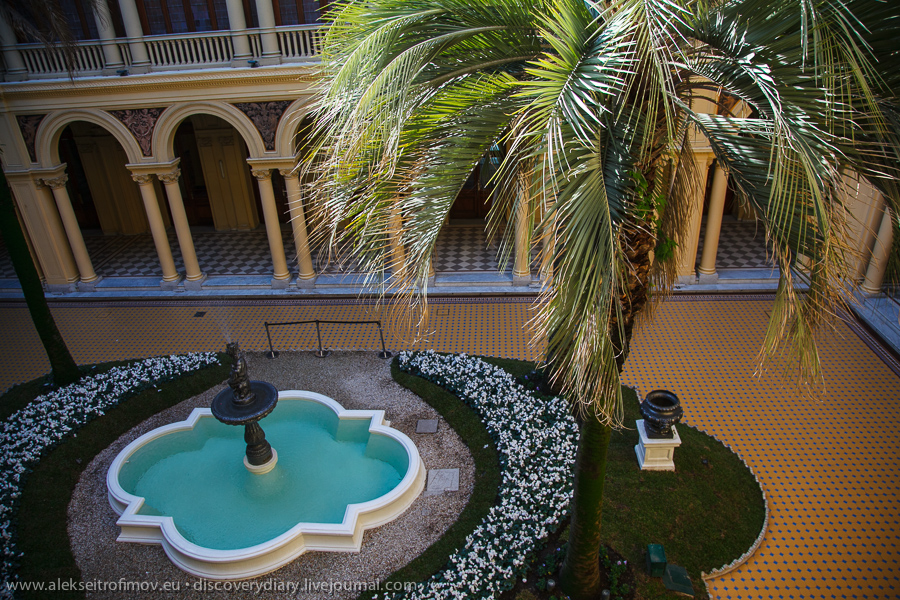 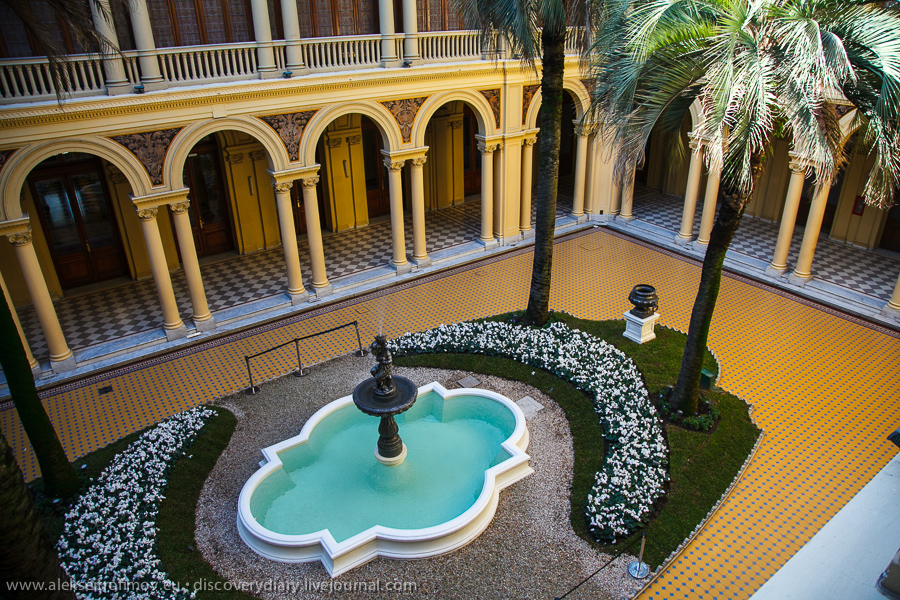 On the first floor the visitor immediately steps into the Gallery of Latin Americans Patriots, headed by Che Guevara. Che Guevara, although he became famous in Cuba and was murdered in Bolivia, was of course originally Argentinean. His nickname, Che, comes from the interjection “che” that he added to every sentence. I was surprised to meet some Argentineans who still do the same, so it’s not a myth.

On this photo the main stand has some interesting elements. Apart from the obligatory mention of the Presidency of the Nation (such mentions can be seen all over the country, on roads and streets, accompanied by a stylised portrait of Cristina), below is the shape of the Malvine Islands (which the British call the Falkland Islands), covered by a flag of Argentina. As in Bolivia you hear everywhere about its loss of the access to the sea, the same way in Argentina the stadiums and streets are named after Argentinean Malvinas. This country seriously believes that will get them back in the end. 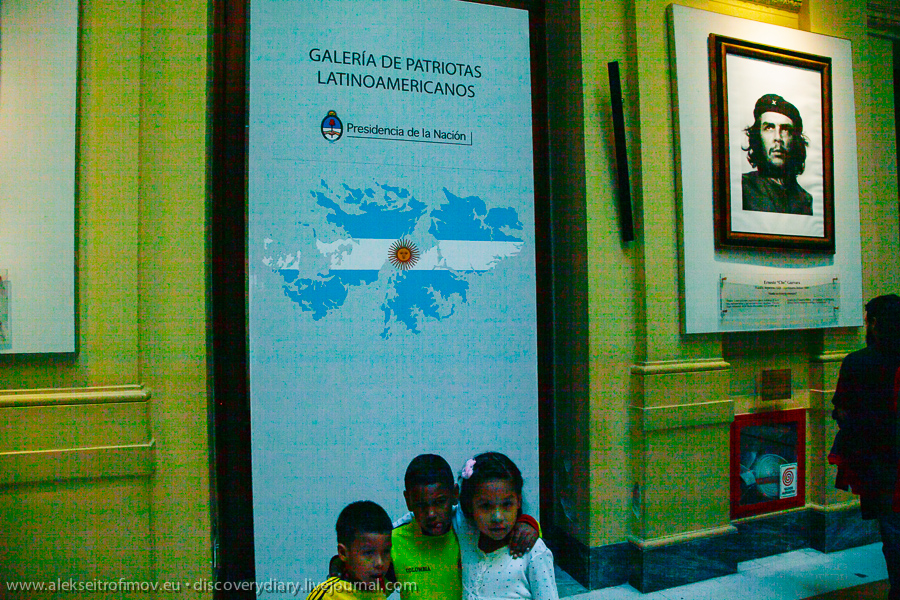 A patio in the Eastern part of the Pink House: 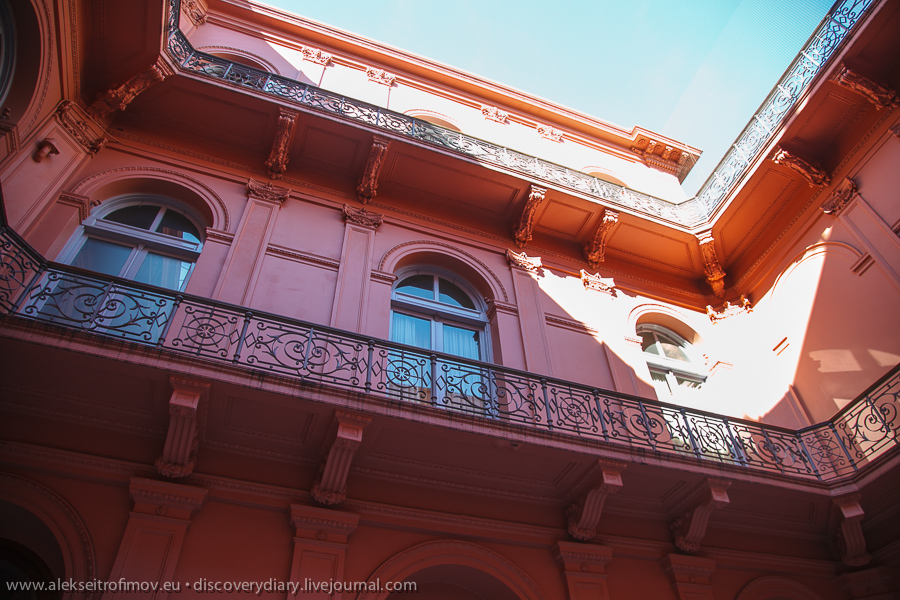 The press conference hall of the President. It is lined with the portraits of important women of Argentinean history. Of course Evita has the central place. 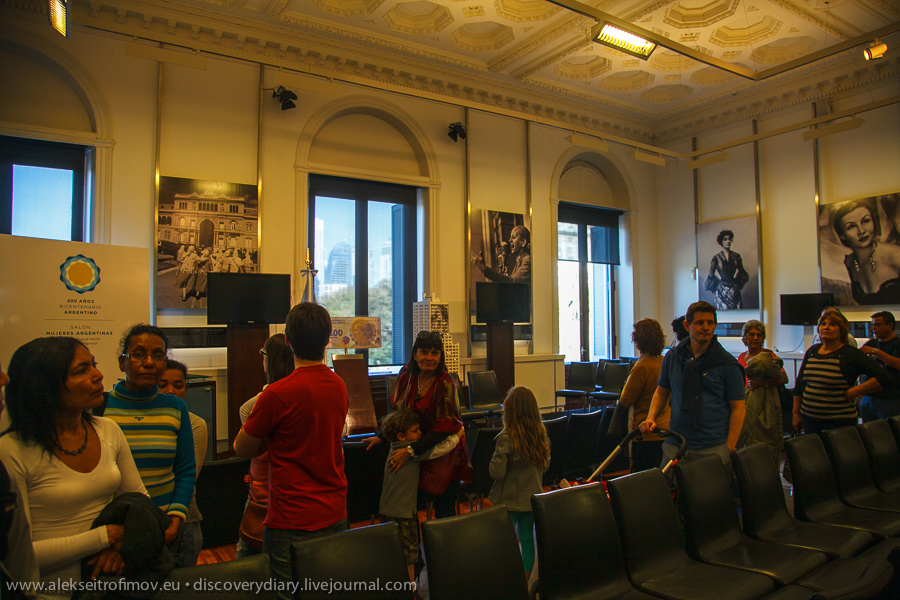 Main reception room. In the corner there is a glass cupboard holding like a relic a dress of Evita’s. 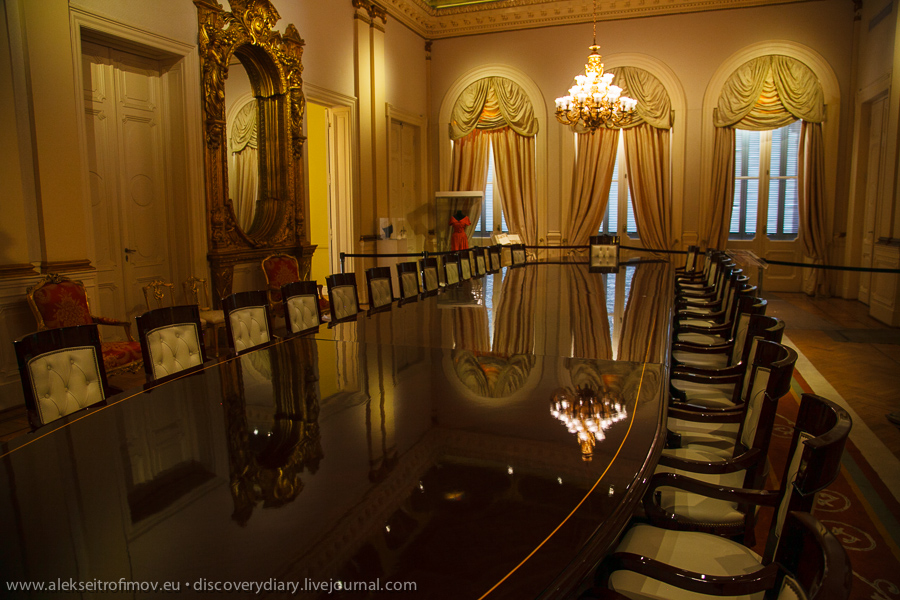 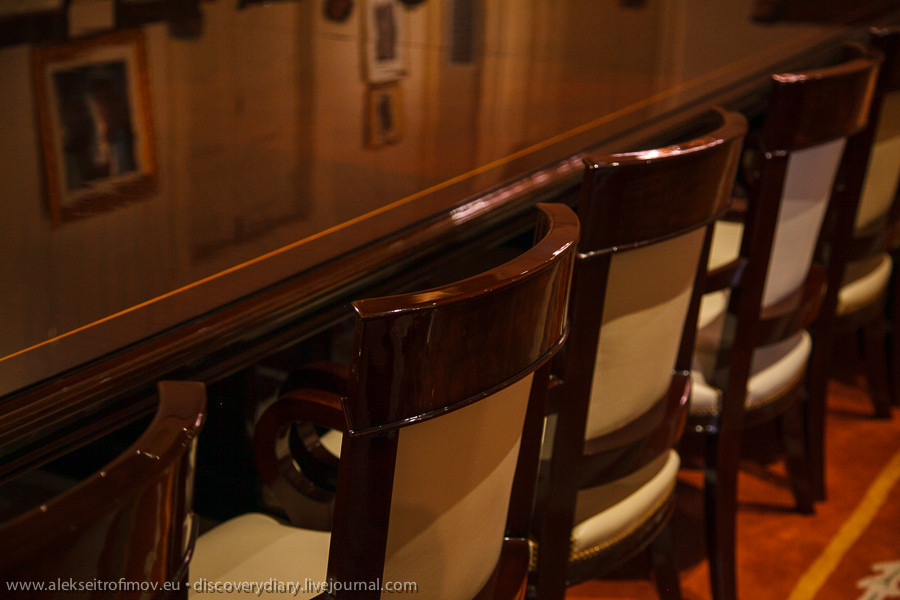 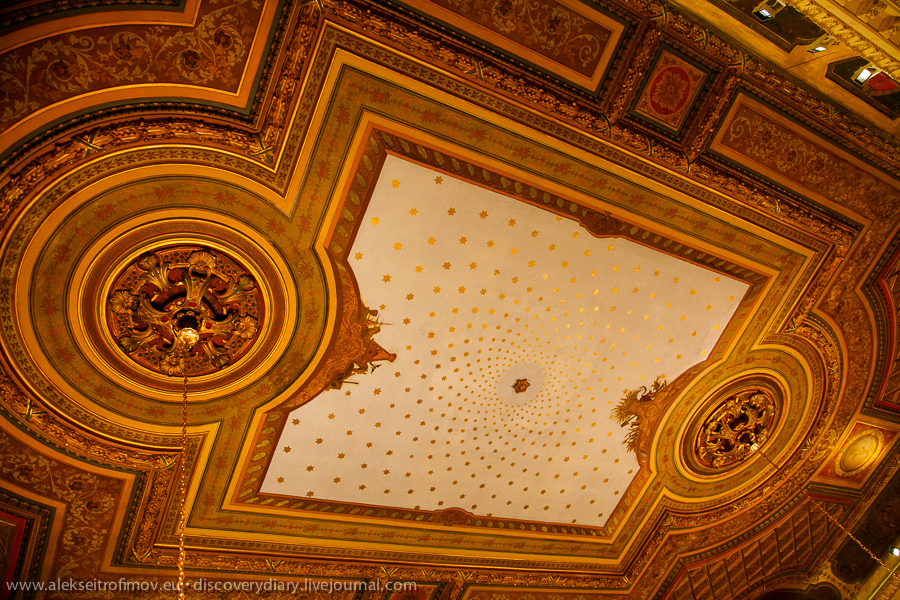 This is the famous balcony from which Evita charmed the crowd and from which Madonna crooned her songs portraying her. Actually this part was initially the back of the building, the facade facing the sea which was right in front of the building. Then the evolution of the urban space led to the situation where the balcony is now facing the main square of Buinos Aires, Plaza de Mayo, whereas the facade is next to a huge busy road. 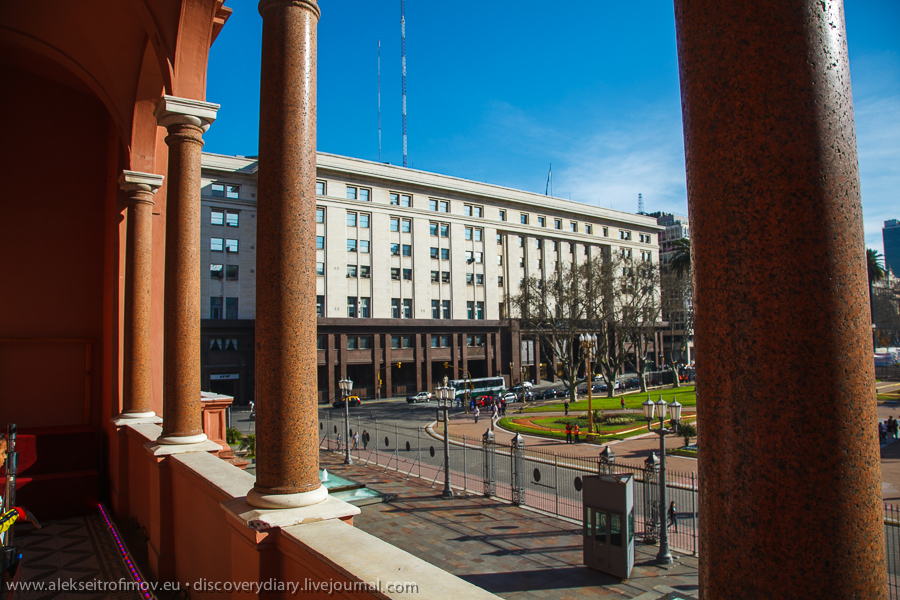 The view from the balcony: 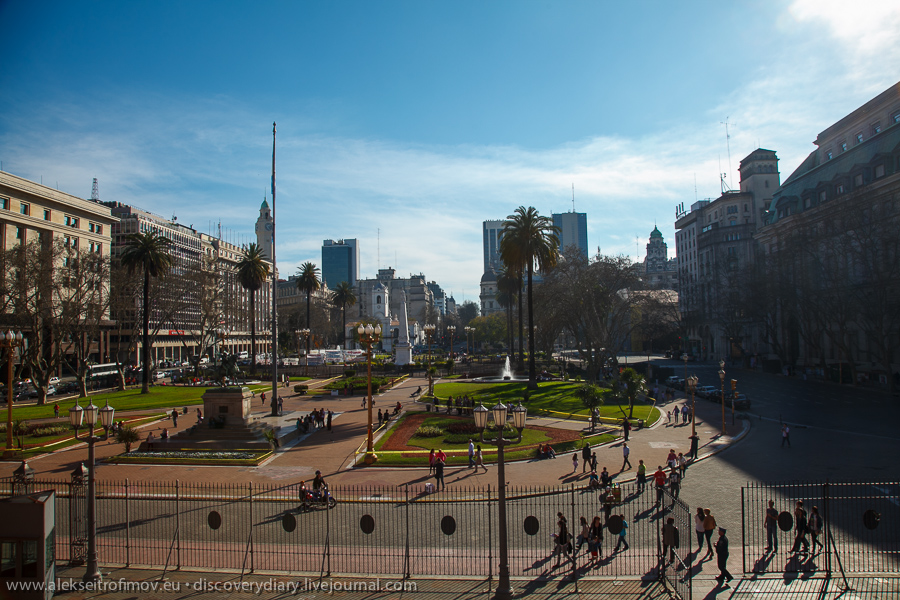 Recoleta
Recoleta is a classy area in the North of Buenos Aires. After the tip of Lonely Planet I bought in the web an mp3 guide to Recoleta and walked around listening to it. This turned out very entertaining and thanks to the guide Recoleta came alive for me. Looking at these photos, I can hear the voices of the colourful personages talking about their home.

I had already visited Recoleta cemetery previously, so this time I did not spend too much time there. Of course the main tourist magnet of this cemetery is Evita’s tomb. I have a very hard time finding it every timeI go, although the cemetery is not that large. The tomb is quite ordinary, nothing special compared to luxurious funerary abodes elsewhere on the cemetery. The obligatory photo: 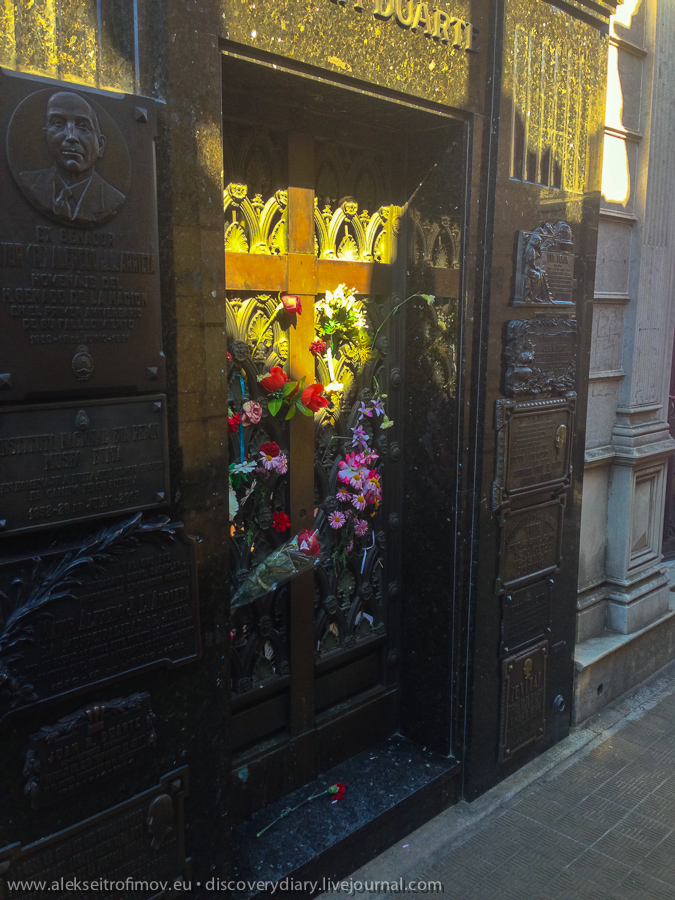 Christ in the Recoleta cemetery church: 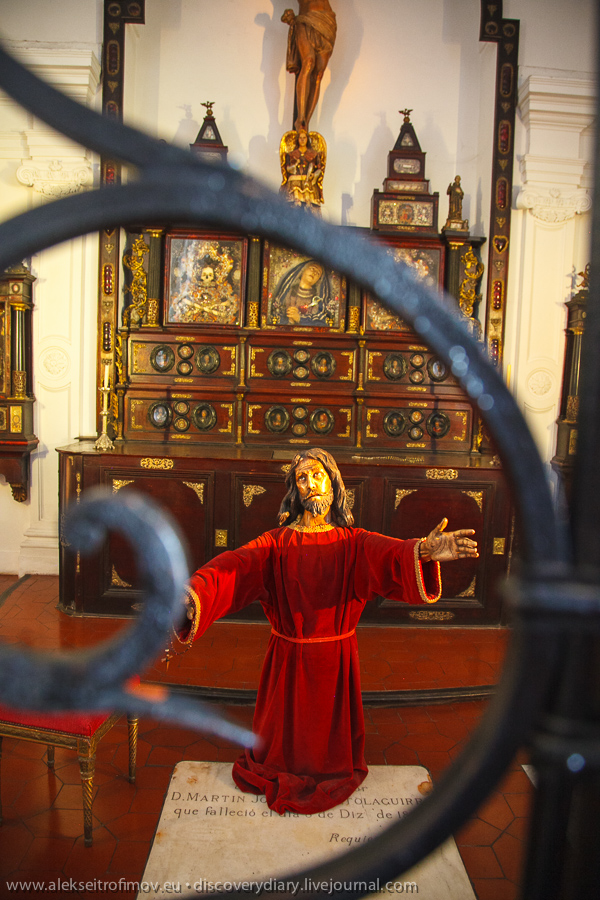 A huge tree next to a legendary café in front of the cemetery. The tree is so old and large that special metallic stems have to help it keep balance. 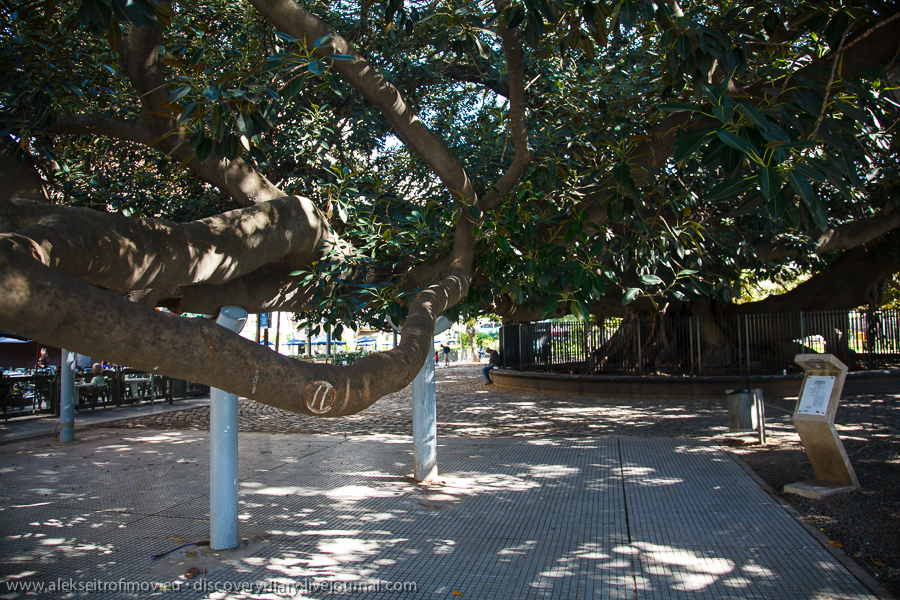 The view from the walking bridge over the Libertador avenue. On the right is the building of the law faculty. From its steps many important speeches were given, none more so than that of Fidel Castro in 2004 in front of a huge young crowd. I can still hear his shamanic voice opening the secrets of the world (thanks mp3 guide)! 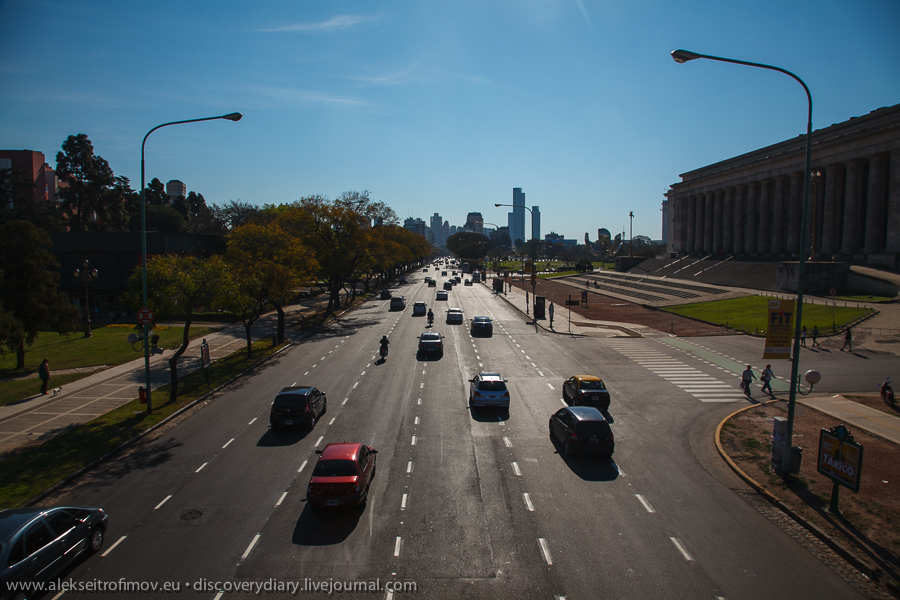 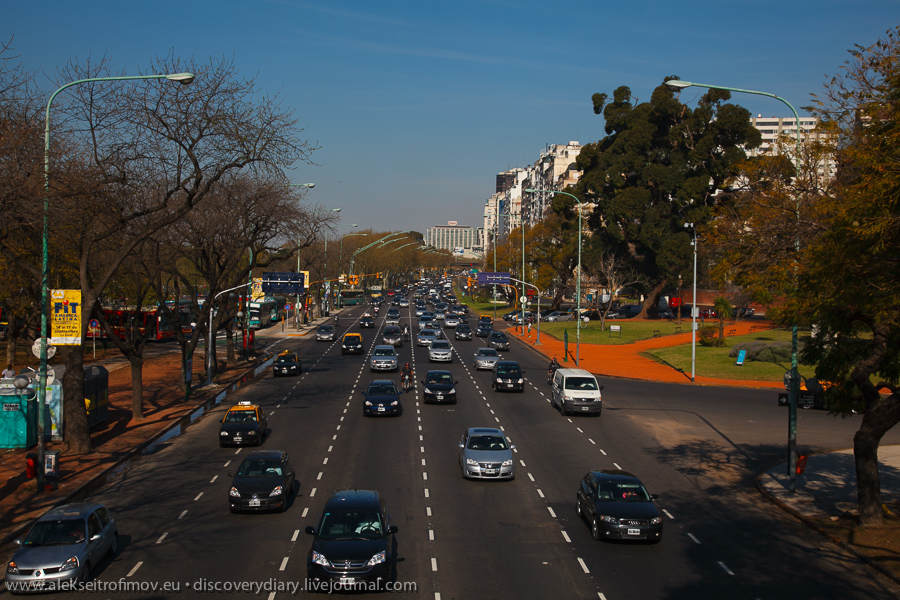 A giant flower which opens and closes with the sun. 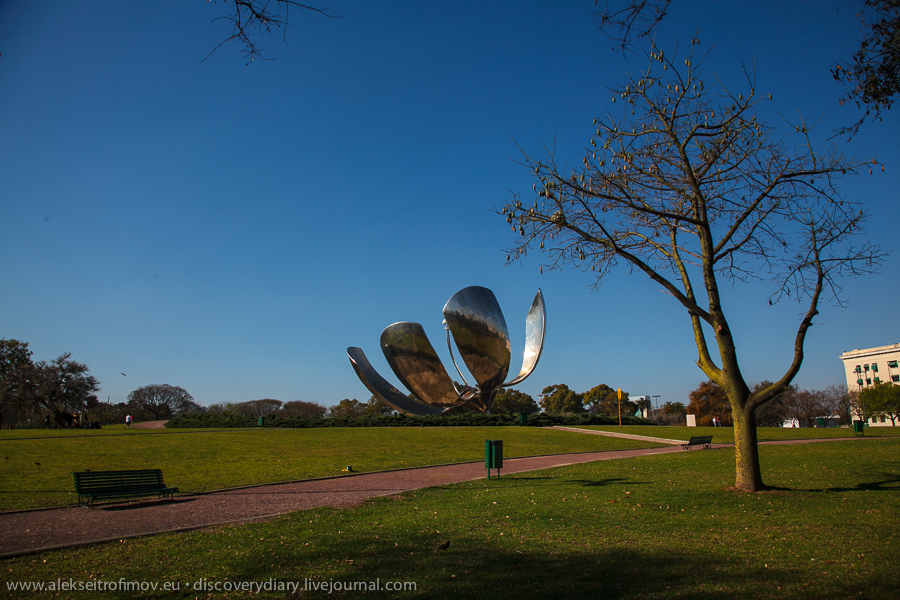 The monument to Raoul Wallengerg. Behind his back are the heaps of fake passports that he issued to Jews to allow them to flee the Reich. 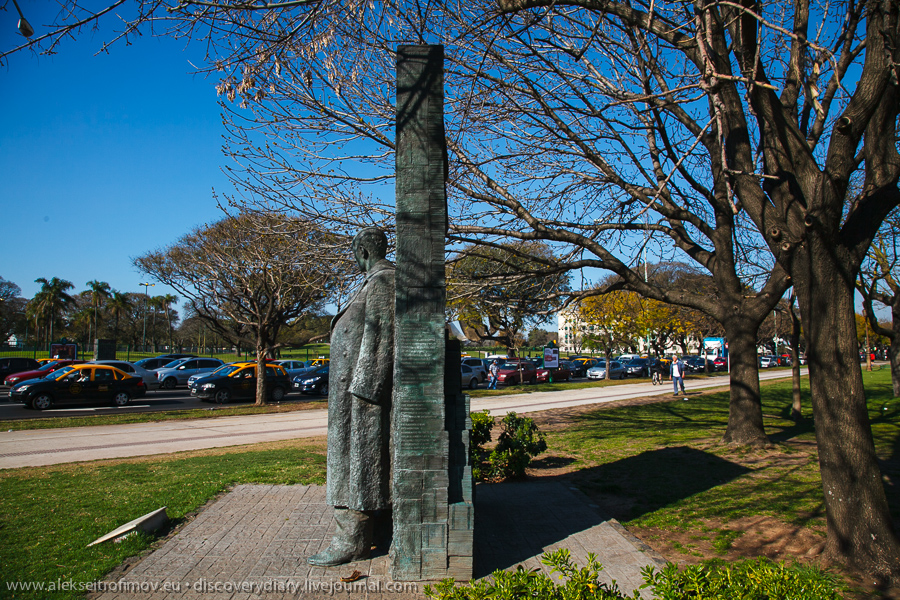 Madres de Plaza de Mayo
In the times of the military dictatorship which controlled Argentina, as most other Latin American countries, in 1970-s and 1980-s, a great number of people were abducted and eliminated. These people are referred to as desaparecidos – the disappeared. The dictatorship intentionally destroyed all traces of their detention and existence. For example their bodies were thrown from planes into the ocean. The mothers of the some of the disappeared created the ritual which eventually became famous. Despite the daner, every Thursday at 15:30 they came to Plaza de Mayo and walked in circles around it. This ritual came to symbolise the tragic silent protest against the crimes of the dictatorship.

The dictatorship has long fallen, but the mothers (and fathers) of desaparecidos still take their mournful turn every Thursday at 15:30 on Plaza de Mayo. 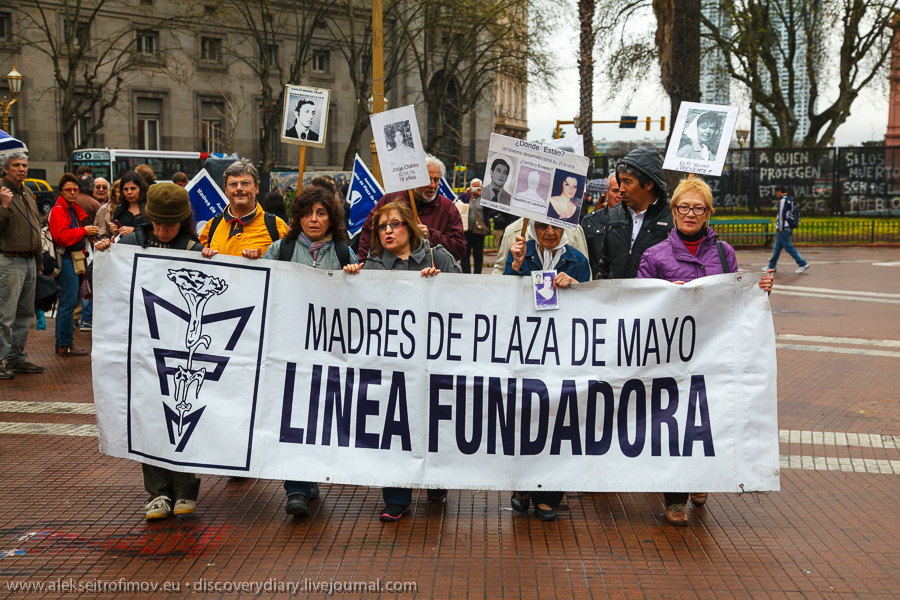 The Pink House is watching over them: 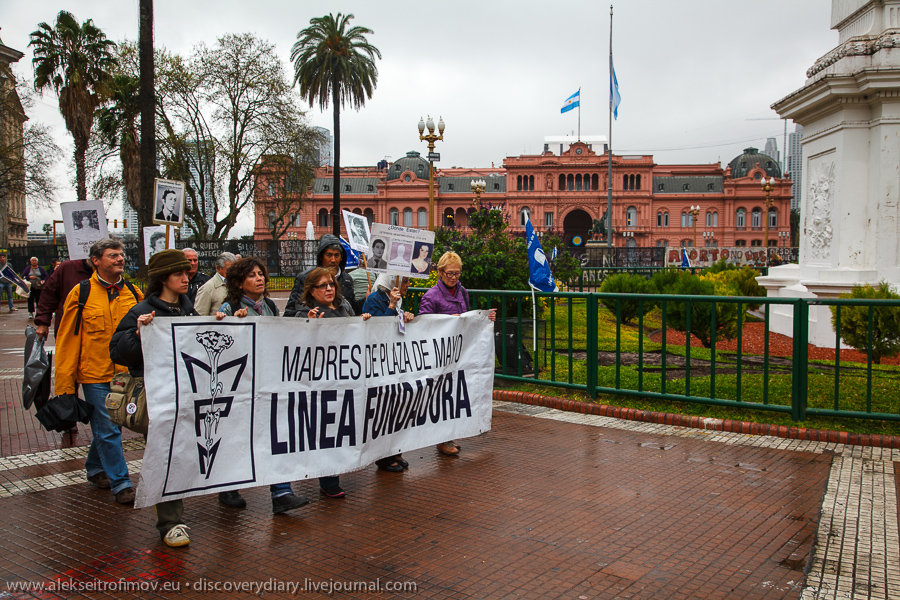