I decided to publish my impressions of Japan out of chronological order, but rather in the order as they come to my mind. I am right now in the city of Kagoshima, at the Southern end of the Southern Japanese island of Kyushu. This post though is about a wonderful place called Nara, where I was just a short time ago. Before Nara I visited also Tokyo and Kyoto, in fact revisited as I already went to both of these metropolises on my last year’s trip to Japan. So this time I only visited some selected sites. However I decided to spend most of my time in the less known Japan. And so I visited Nara, Kagoshima, Fukuoka, Matsuyama, Hiroshima, Osaka…

Nara is the ancient capital of Japan. In the prehistorical times the capital was moved every time the emperor changed, due to shintoist taboos. Later as the Yamato tribes settled and buddhism grew in influence at the imperial court, it was decided to found a permanent capital. Two other places were briefly tried, but finally the emperor chose Nara, which gained the status of the capital in the year 710. Nara was built in imitation of China’s glorious capital of Chan’an (today Xi’an), then the largest city in the world by population. Nara’s plan was also based on the cardinal points and the main temples and palaces were placed based on a system also involving cardinal points. Nara remained capital only for 75 years, as due to complicated palace intrigues the capital was moved to Kyoto, which remained capital for more than a thousand years.

However Nara still possesses many important Japanese cultural sites, of which eight are on the UNESCO World Heritage list. Mostly these are Buddhist temples. The imperial palace did not survive until our times, however archeological excavations are taking place in its location and some parts of the palace have in fact been restored.

My visit however started from the Isui-en garden. This is the most famous garden in Nara. In the season of falling leaves it leaves a truly magical impression. 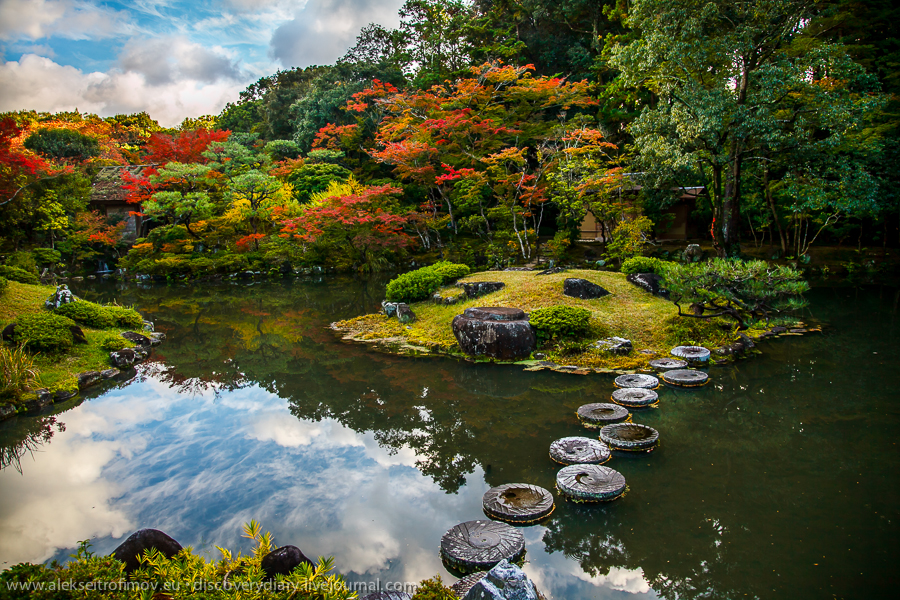 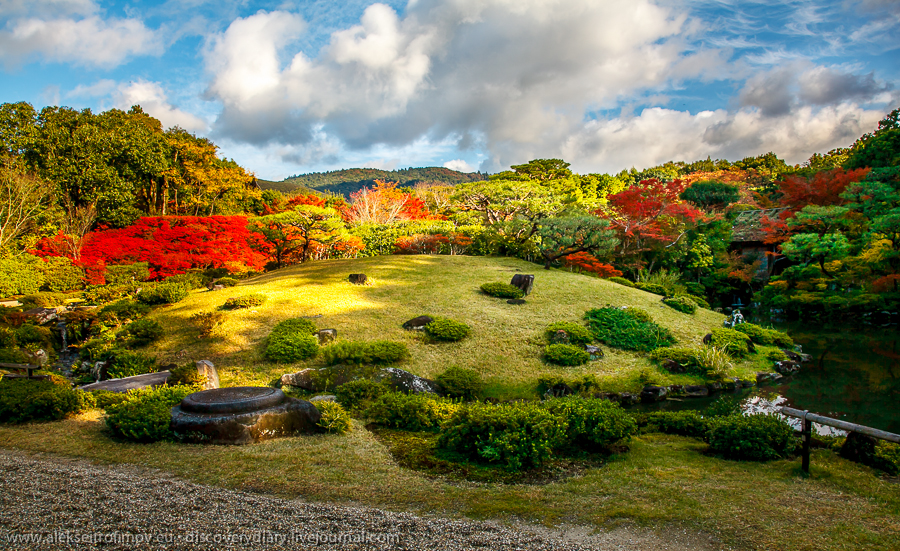 The plan of the garden is based around a manmade lake of a peculiar shape. Indeed it retraces the shape of particular hieroglyphs. In the middle of the lake is this island, also part of the hieroglyph. 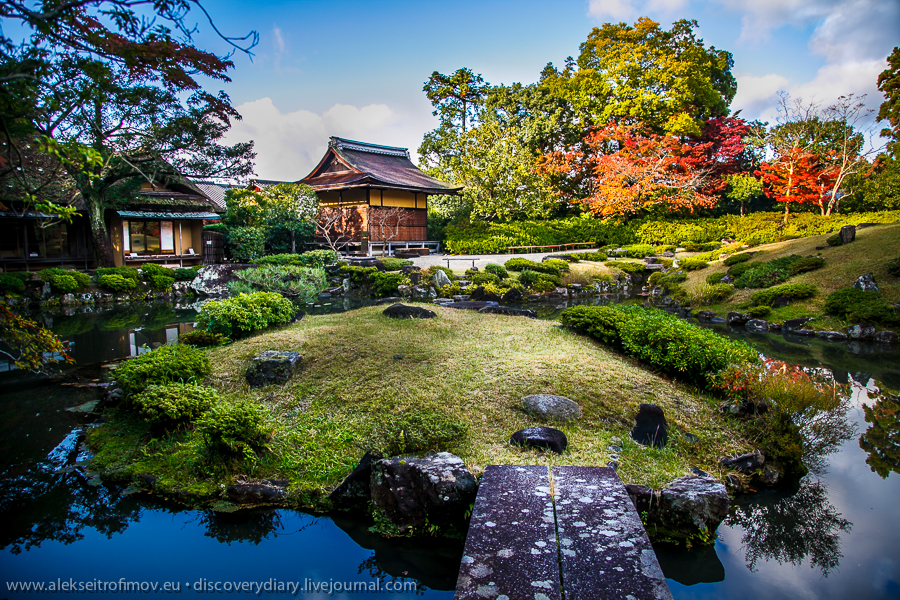 You can cross some part of the lake using these paths: 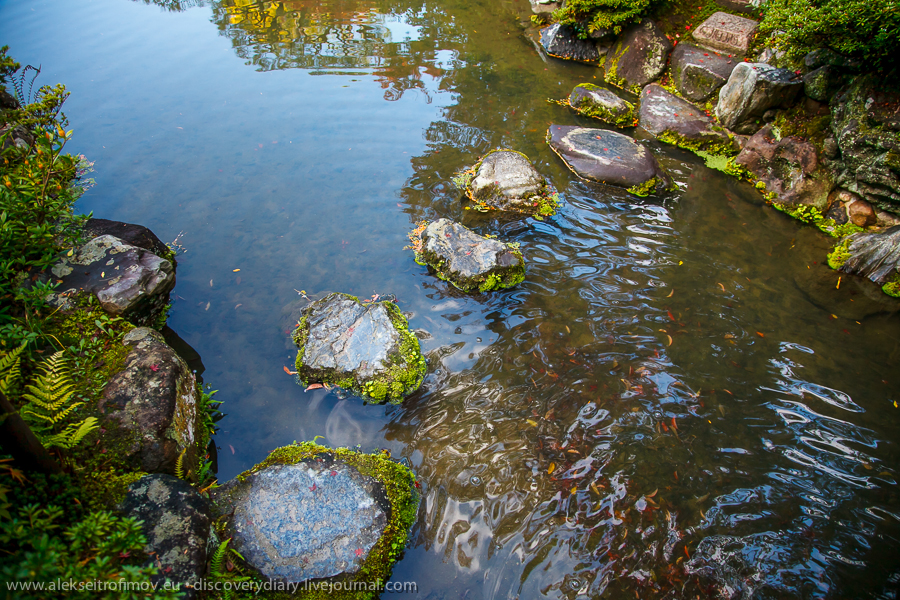 While enjoying the waterfalls: 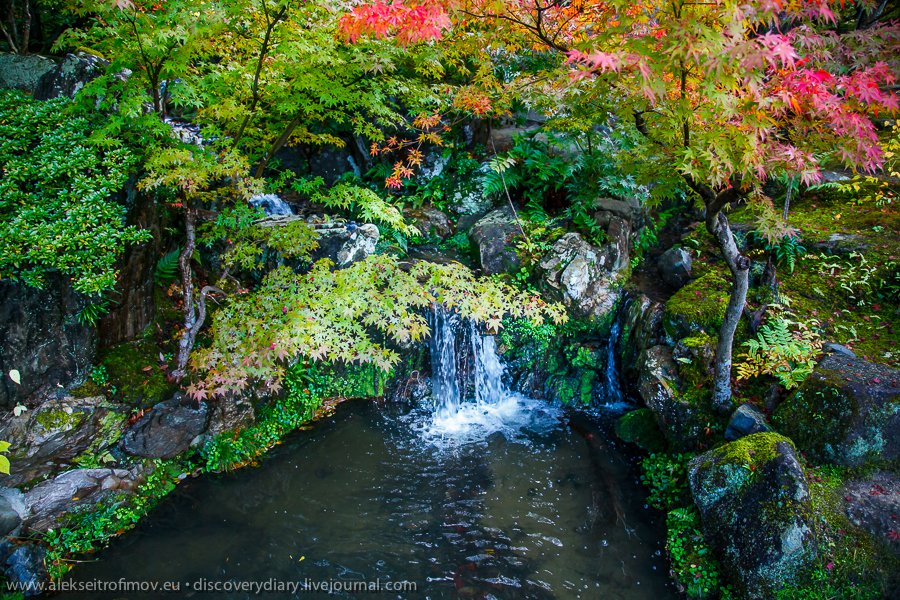 The shore of the lake: 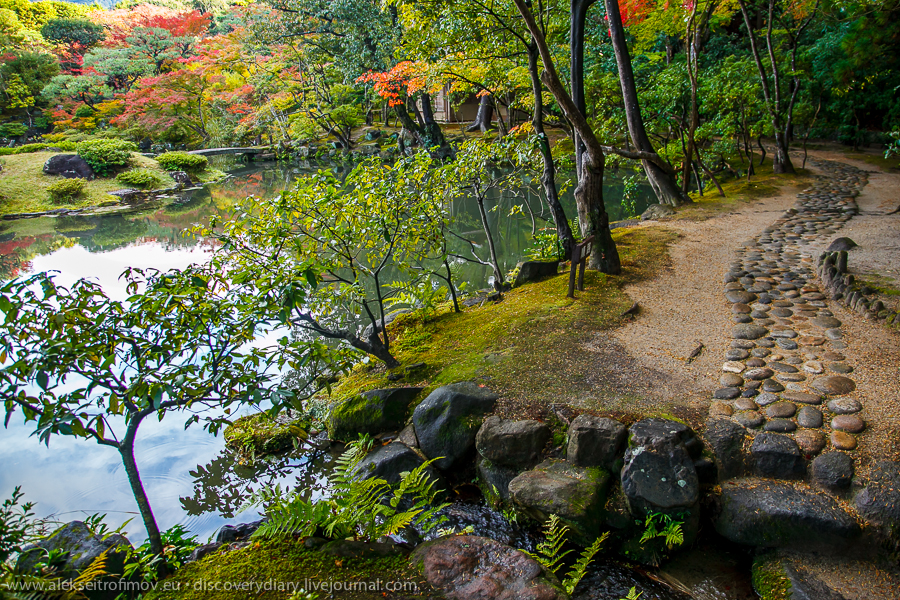 Paths in the garden: 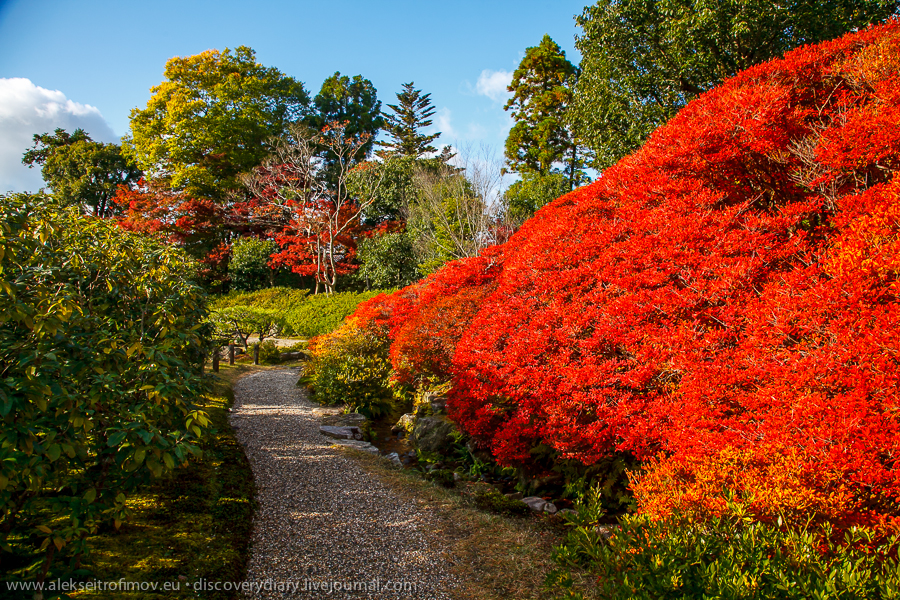 A path leading towards a teahouse: 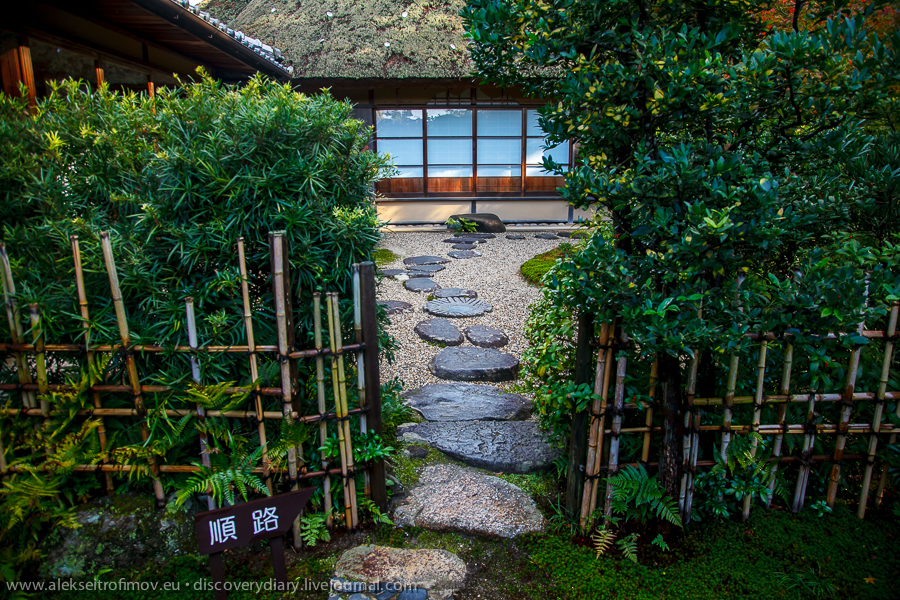 Another lake, right by the garden’s entrance: 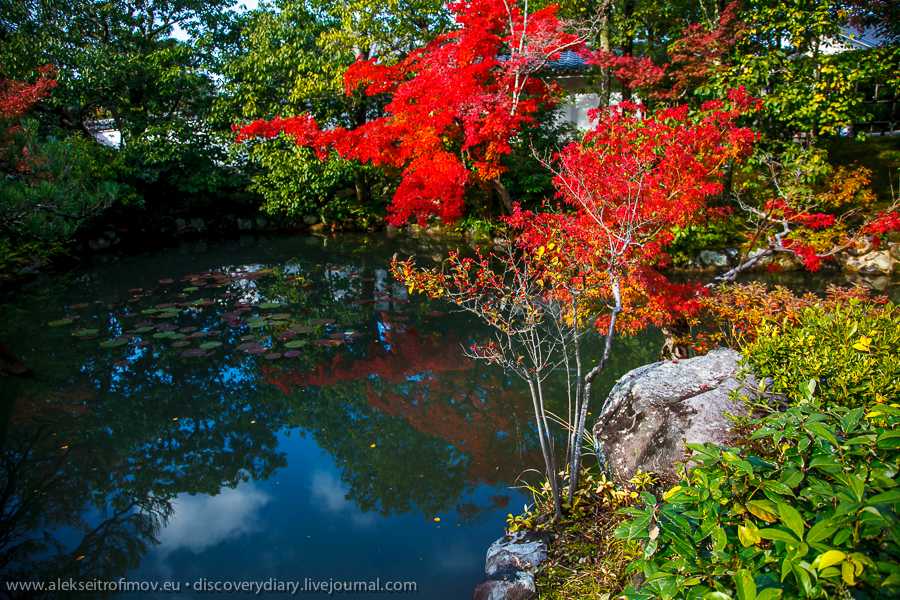 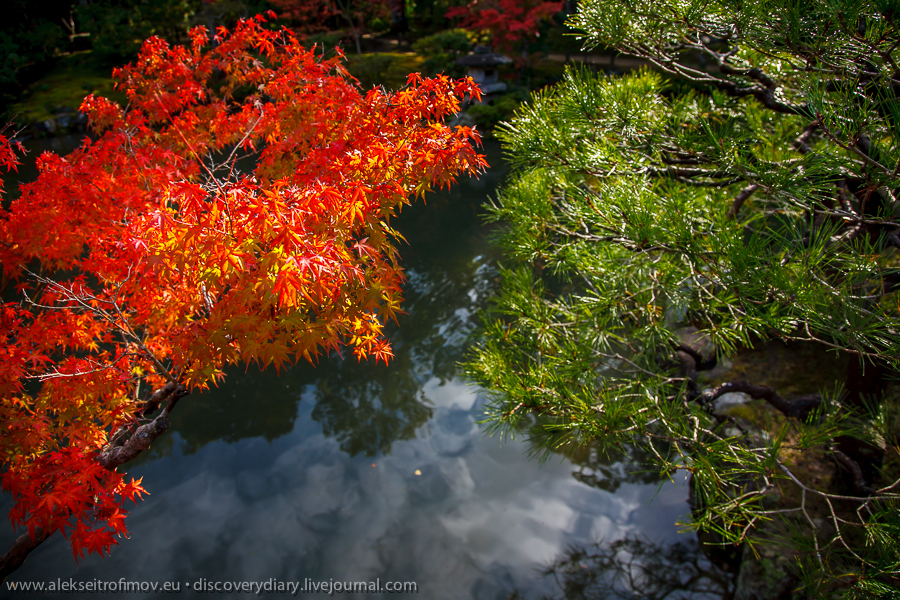 Next to Isui-en there is another garden, Yoshiki-en. It is in another style, less obviously manmade, more seemingly chaotic (although of course every detail is considered also there). A path covered in moss in Yoshiki-en: 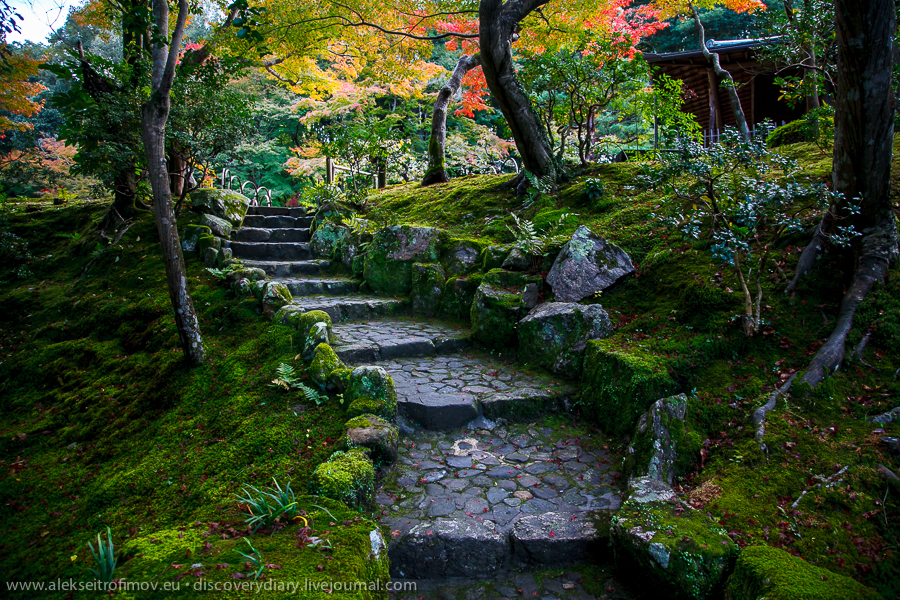 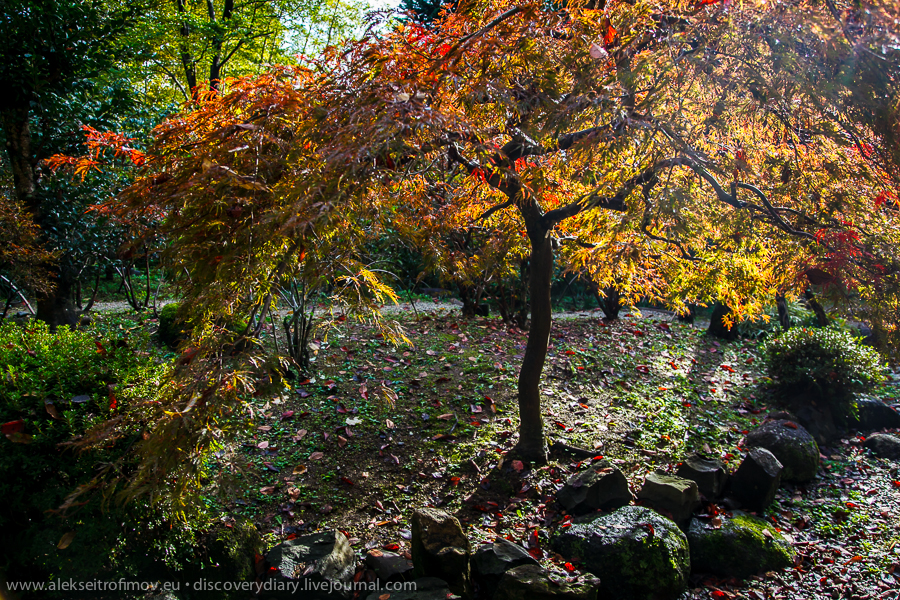 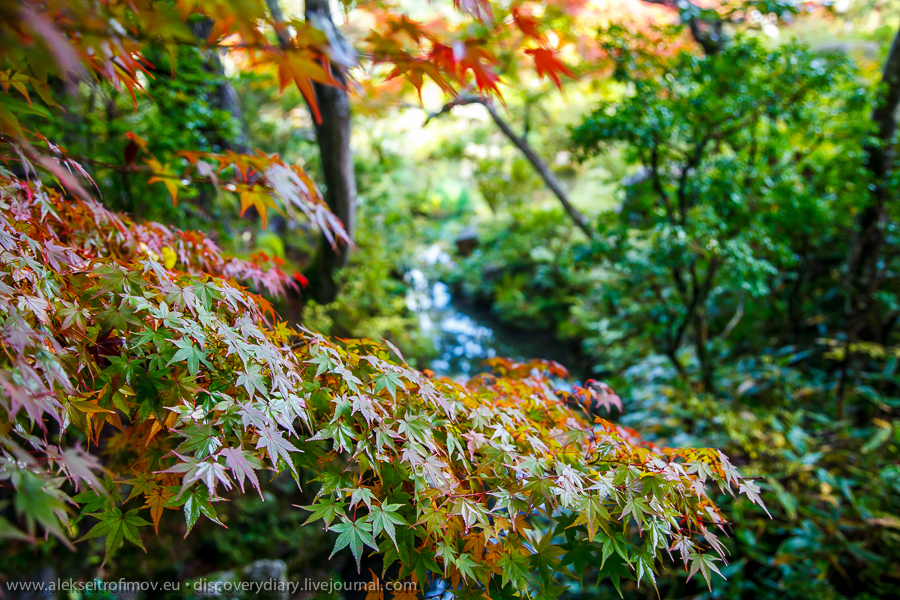 Nara’s symbols is a deer, it is seen as its keeper. Around 1200 deers live in the park around Todaji-ji temple. These deers have no fear of people. This one was perfectly fine with having some peaceful interaction with me at the park’s entrance: 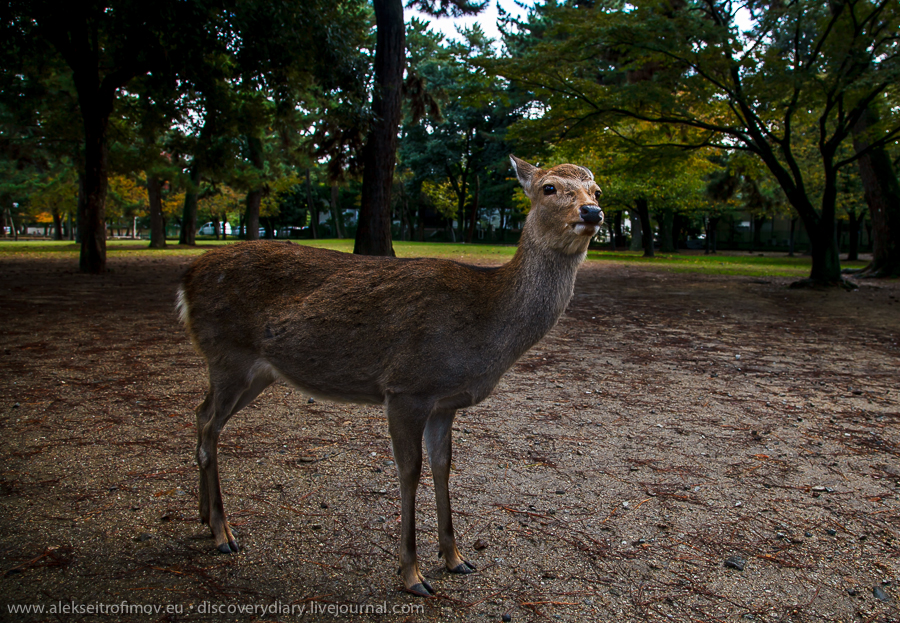 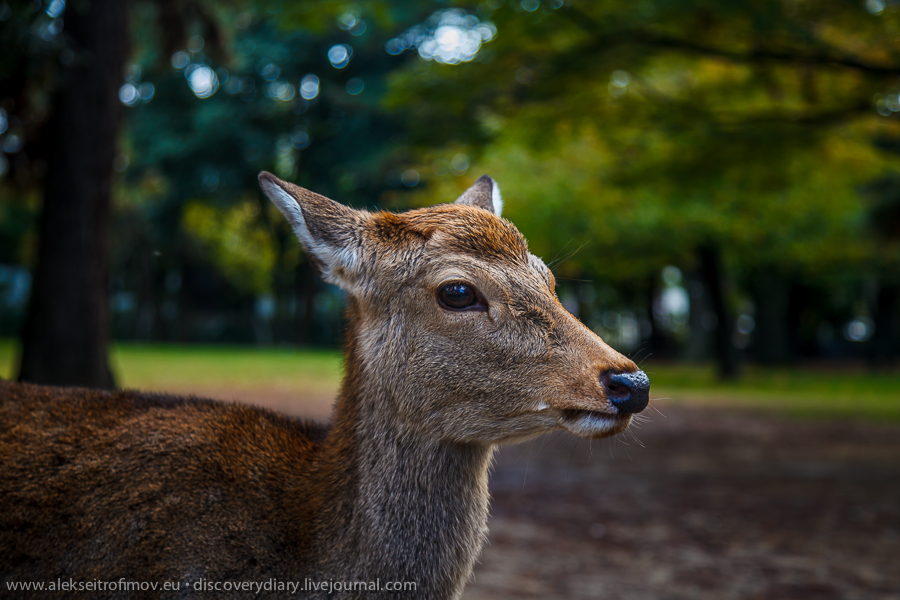 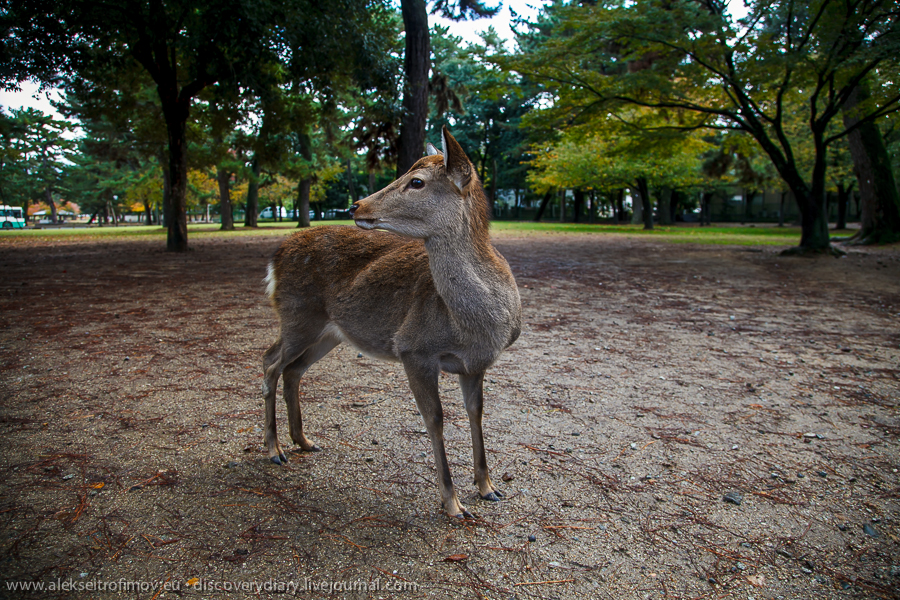 Later I discovered a place where they are fed: 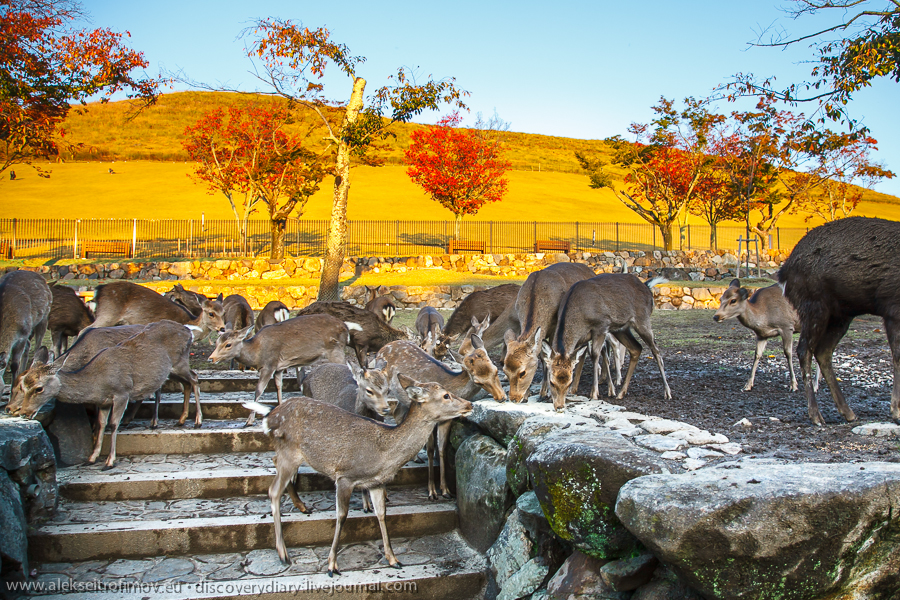 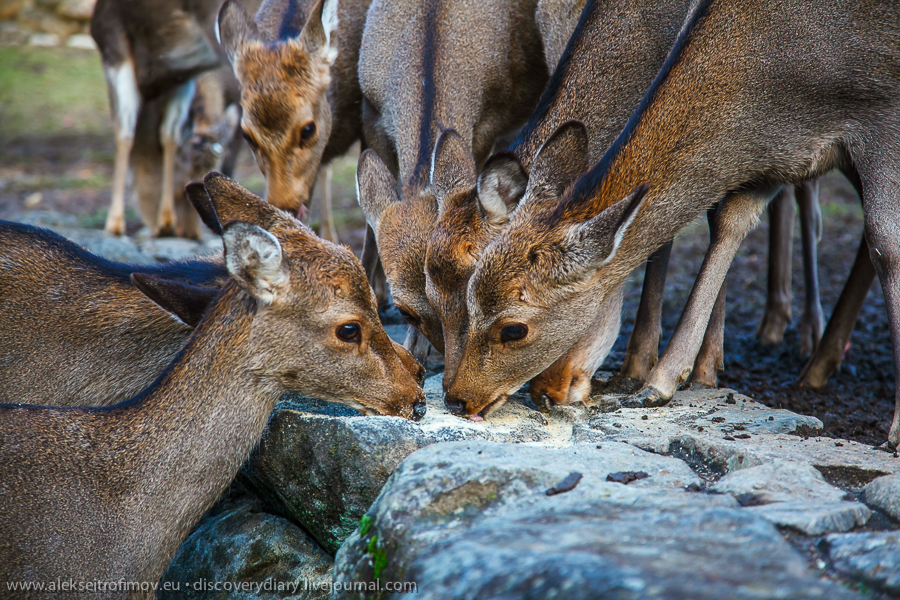 No doubt the most famous site in Nara is the statue of the Great Buddha, Daibutsu, in the temple of Todaji-ji. The temple is located in a huge park Nara-koen. A road leading to the temple first passes the huge Nandai-mon gates: 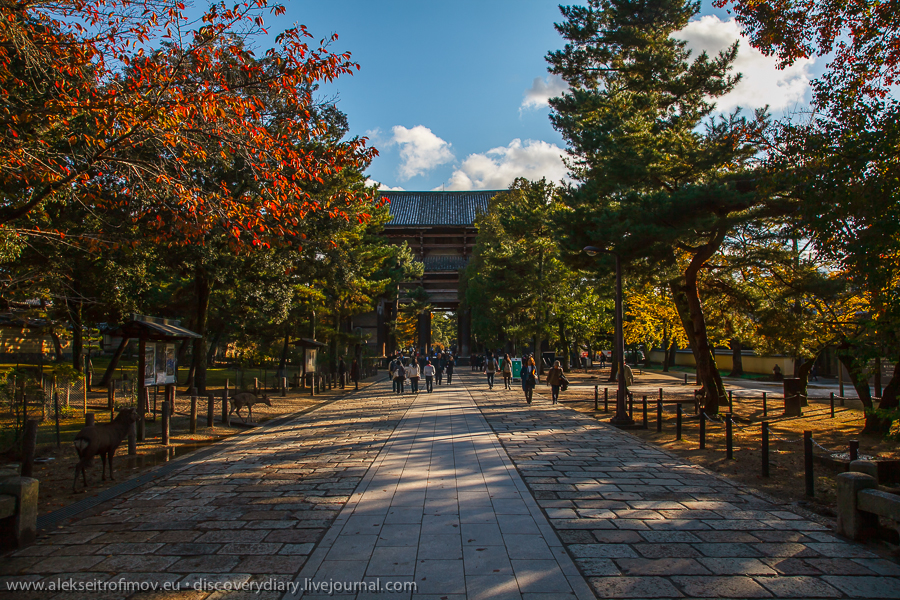 After buying your ticket you are suddenly faced with the view of Daibutsu-den, the wooden hall housing Daibutsu. This is the biggest wooden building on Earth. It burnt several times, therefore the current building dates from 1709. The initial building was 1.5 times larger (built in 8th century)! 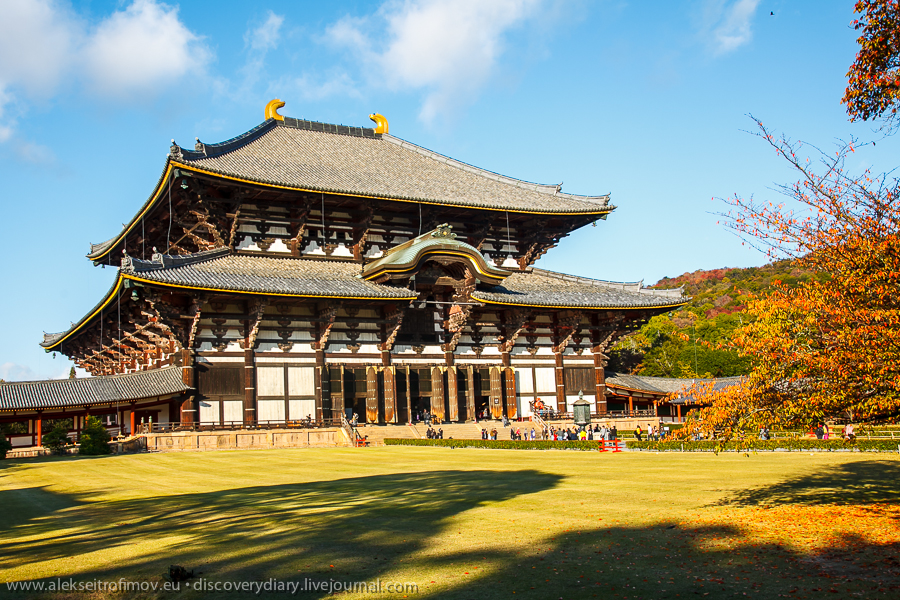 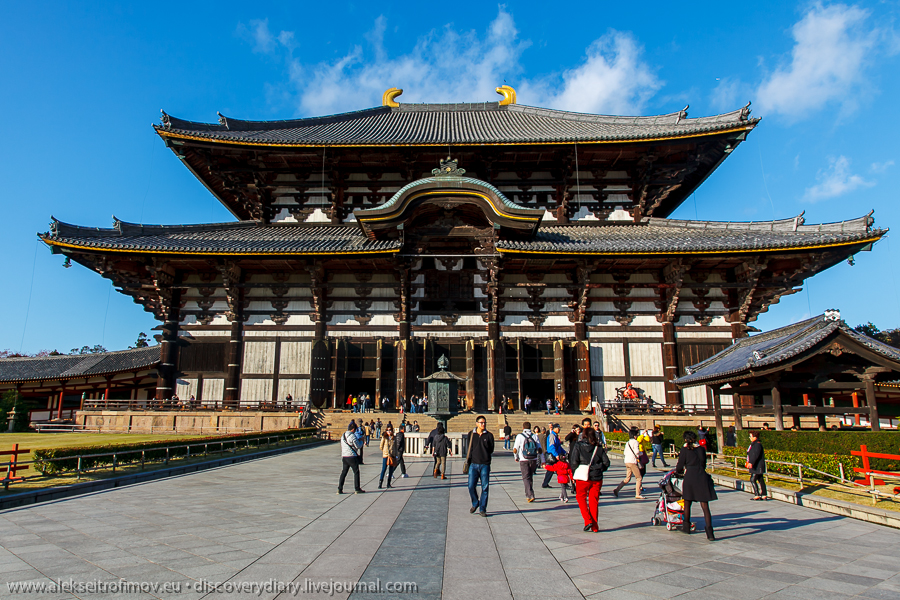 Daibutsu, the Great Buddha. 15 metres high. The 16 little buddhas surrounding it are in fact all different sizes, graduated so that they appear same size from the ground. 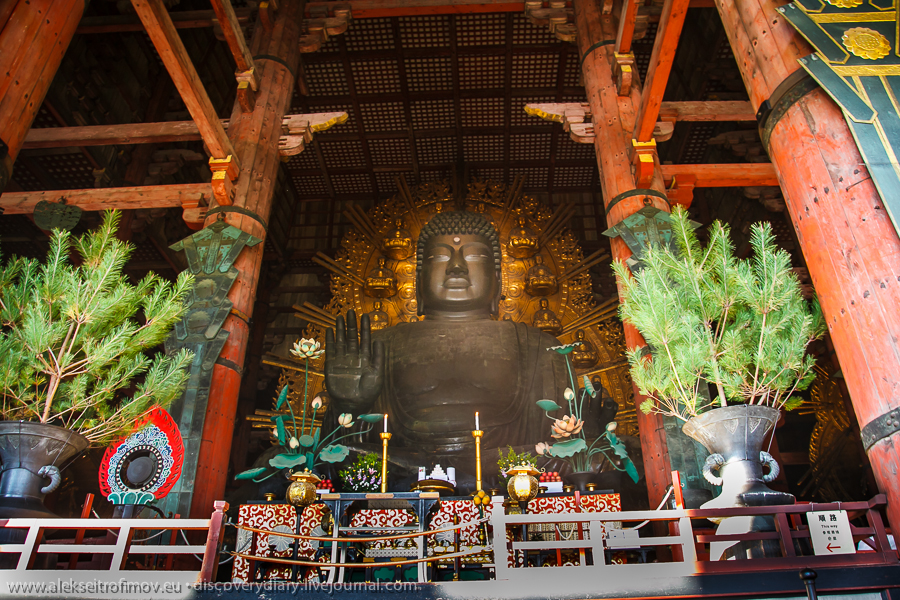 The visitors circle Daibutsu in clockwise direction. It is a pretty impressive site. 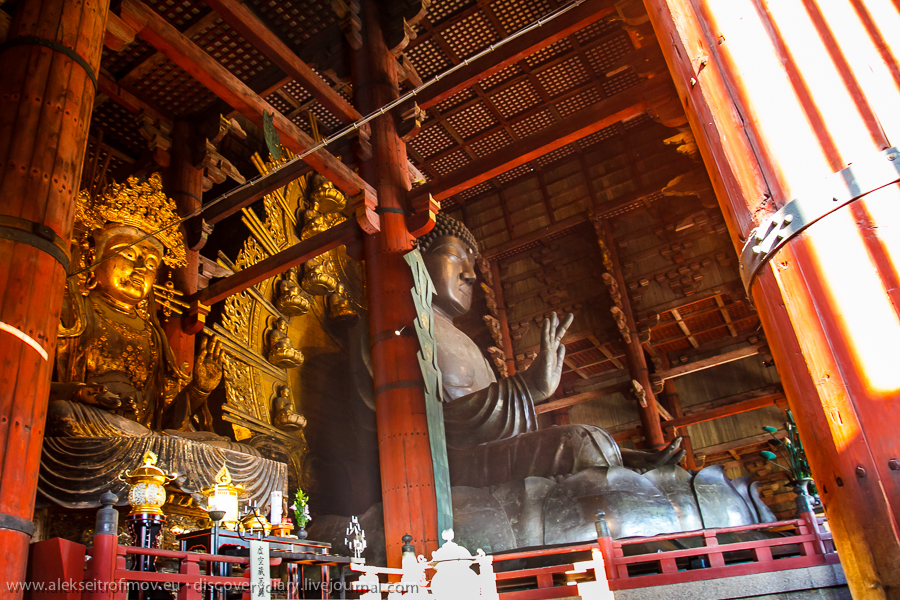 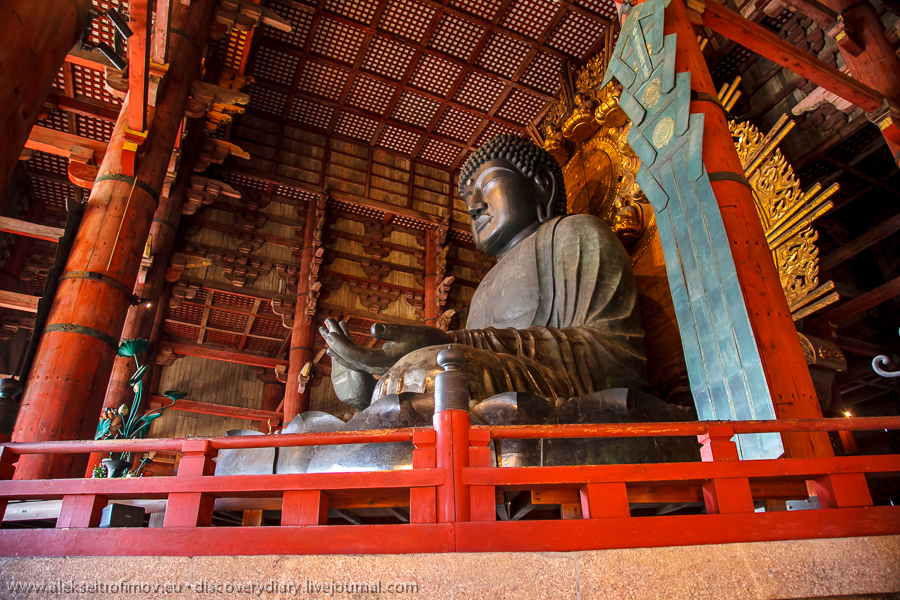 Todaji-ji was conceived and executed as a new spiritual focus for the more centralised Japan. It is surrounded from every side with various cult buildings, temples, and lakes. 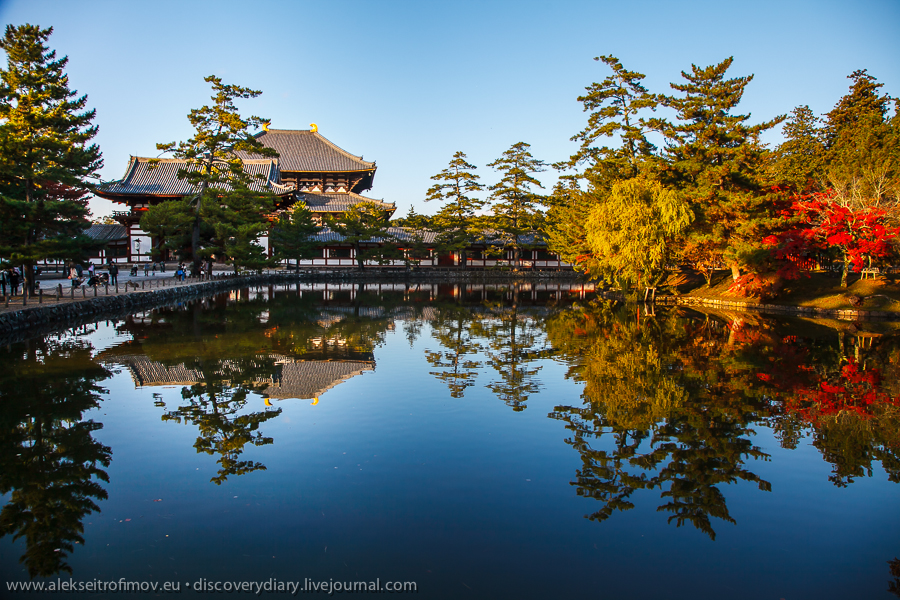 The view of Nara and Todaji-ji from the temple Nigatsu-do, located on a hill towards the East: 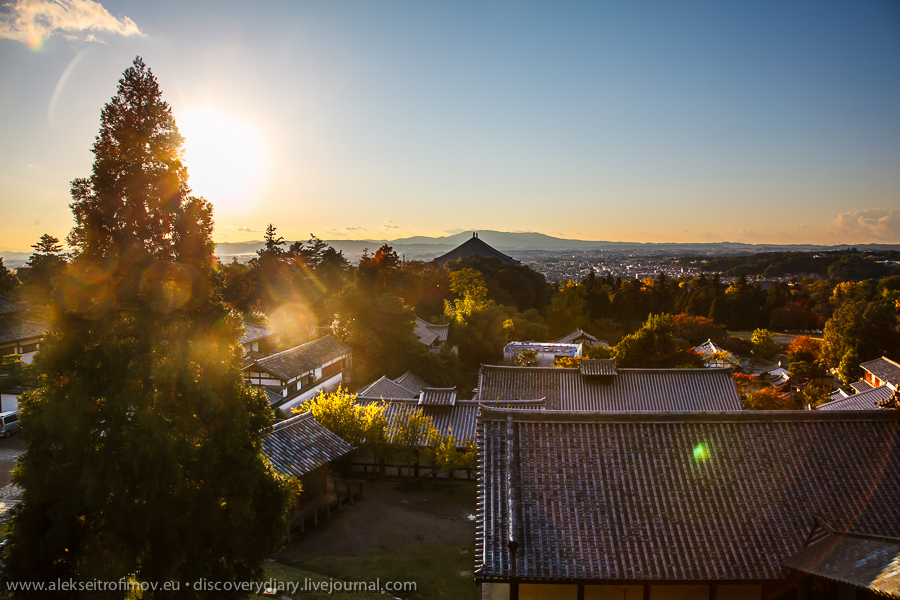 One thought on “Magical Nara”