It is hard to find a clear answer why Americans dropped the bomb specifically on Hiroshima. It was indeed a key military object in that it was a port through which the Japanese troops were sent overseas. However towards the end of the war the American planes had such an overwhelming control of the skies that any city could be easily destroyed using conventional bombs. Tokyo for one for practically levelled by incessant bombings. At a certain moment the American High Command on the contrary created a list of cities where conventional bombing was forbidden – so that in case of a possible atomic bombing the results would be most obvious. On this list was also Kyoto (16 UNESCO World Heritage sites). Later after some reflection Kyoto was removed from the list. Hiroshima however remained as number 1. One of the theories is that it was thought to be the only city without POW camps (which turned out wrong).

On 6 August 1945 the first atomic bomb in the history of humanity was dropped on Hiroshima. This action led to the deaths of 140000 persons, from the first second to years later, due to explosive wave, heat, fires and radiation.

In today’s Hiroshima no visible traces of the bombing persist. The old quarters are all built up with modern buildings. But one building remains as it was right after the attack. It was one of the rare concrete buildings in Hiroshima. The models showing the situation after the explosion the city looks like a grey ashen desert in every direction – and only this building stands in the middle, like a monument. The hypocentre of the explosion was just a couple of metres away. 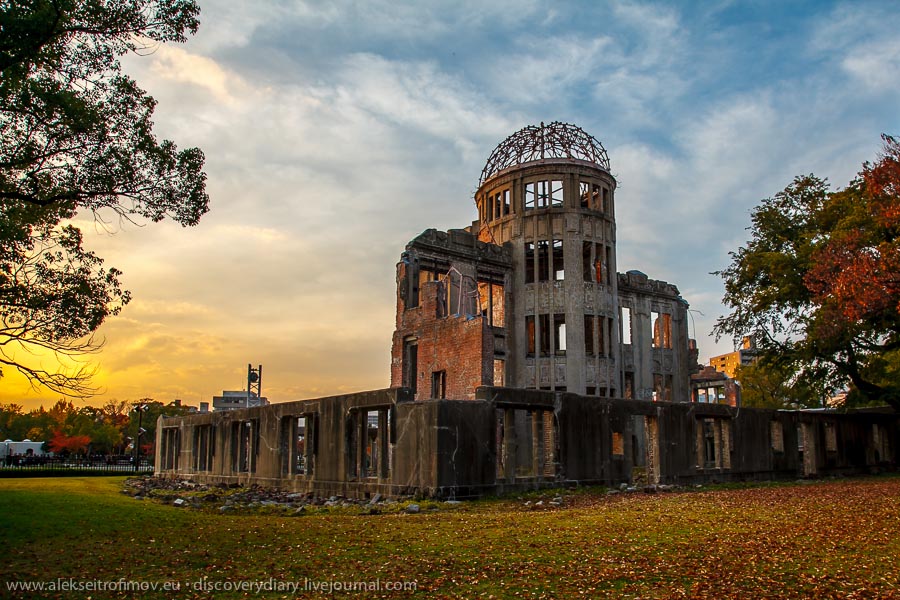 A sizeable proportion of the locals insisted on razing it, but finally it was decided to keep it as a visual symbol of the bombing. Today it is referred to as A-Bomb Dome and has been listed by UNESCO as a World Heritage site. 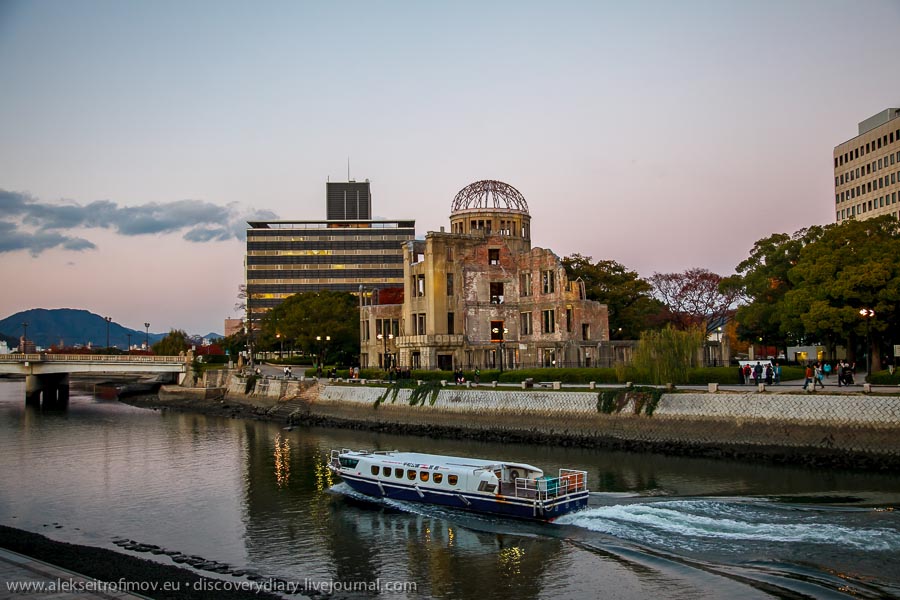 The Memorial Cenotaph. Inside the Cenotaph books with the names of all the victims are held. Every year on the anniversary of the bombing a demonstration of around 50000 people gathers in front of the Cenotaph. Their demand is the total abolishment of atomic weapons. 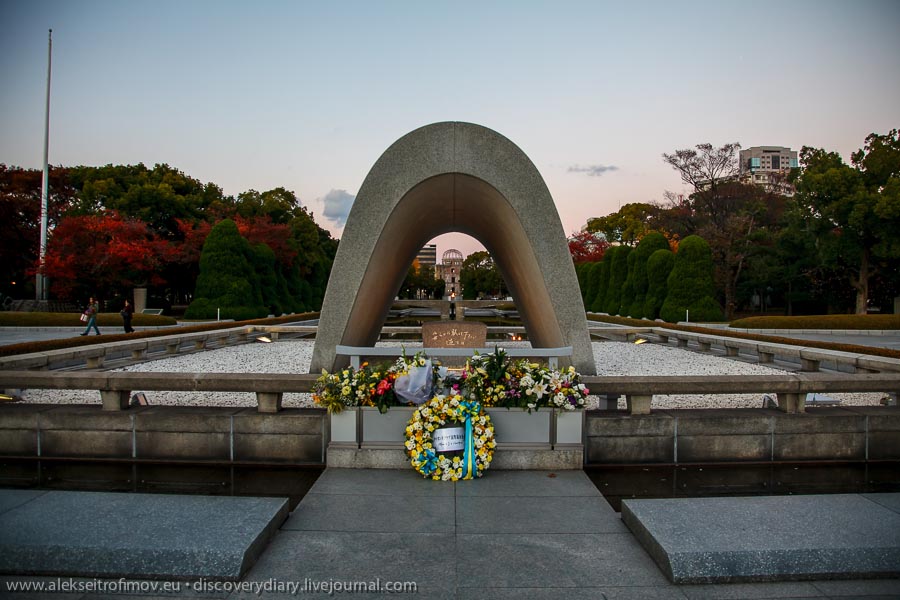 The Peace Flame burns on the plaza between the Cenotaph and the A-Bomb Dome. It will be extinguished only when the last atomic bomb is destroyed. 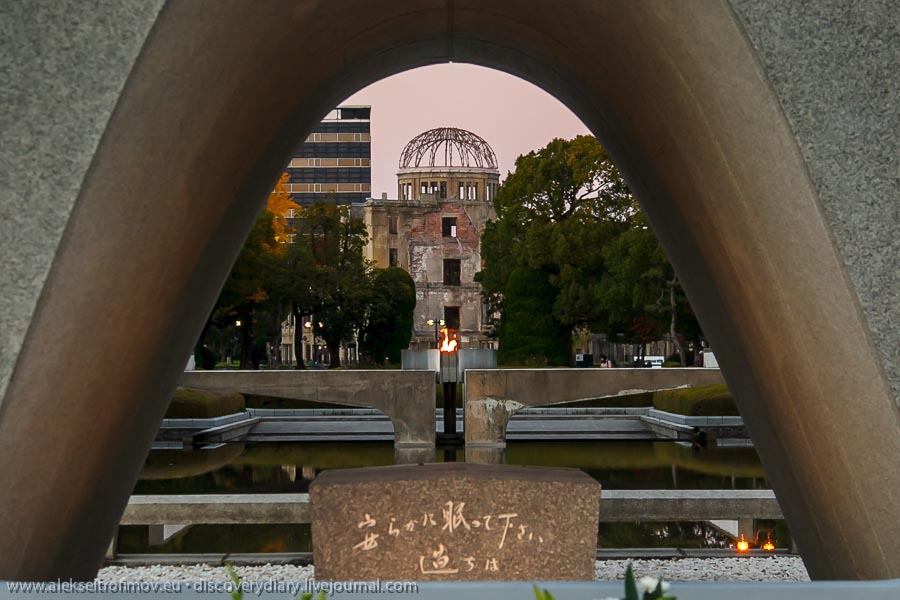 This is how the very hypocentre of the explosion looks. It is found on a very usual looking street very close to the A-Dome. To be precise, the actual point of explosion was about 600 metres in the sky above this point. This allowed to maximise the destructive effect. 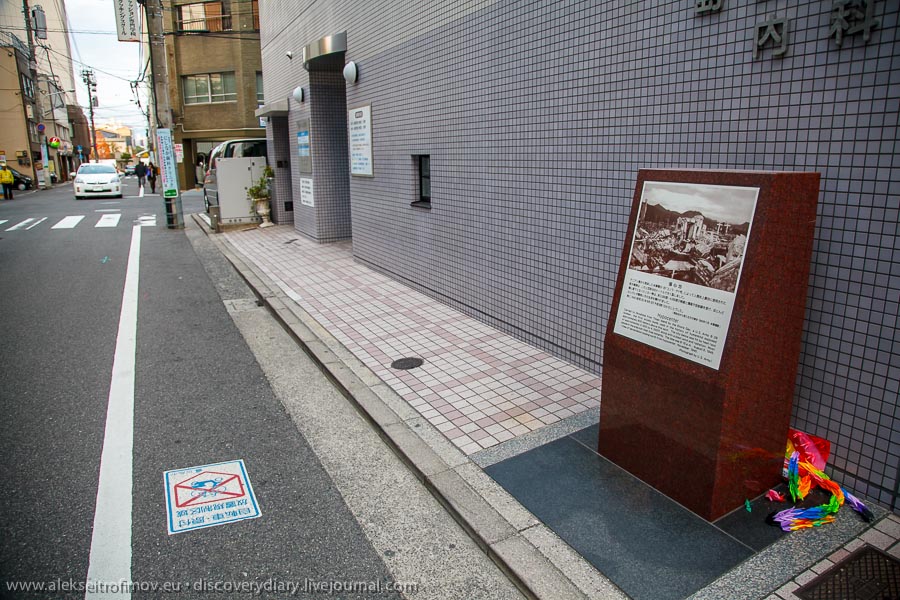 Around the Cenotaph and the Peace Flame there is a park housing a number of other monuments. Inside this mound are buried the ashes of those dead who had no relatives to claim them or who could not be identified. 50000 people. 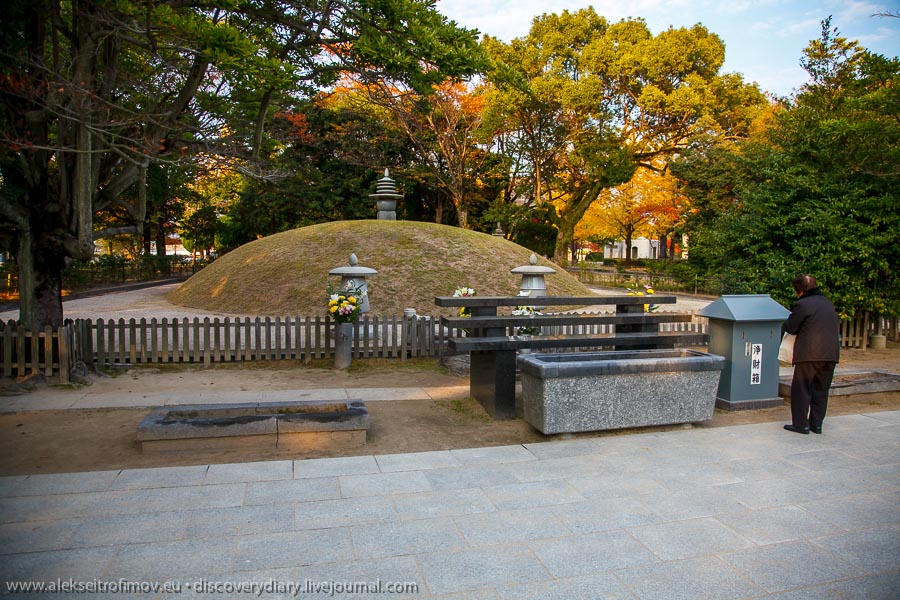 This is the monument to the Koreans who died in the explosion. More than 10% of the victims were Korean forced labourers. 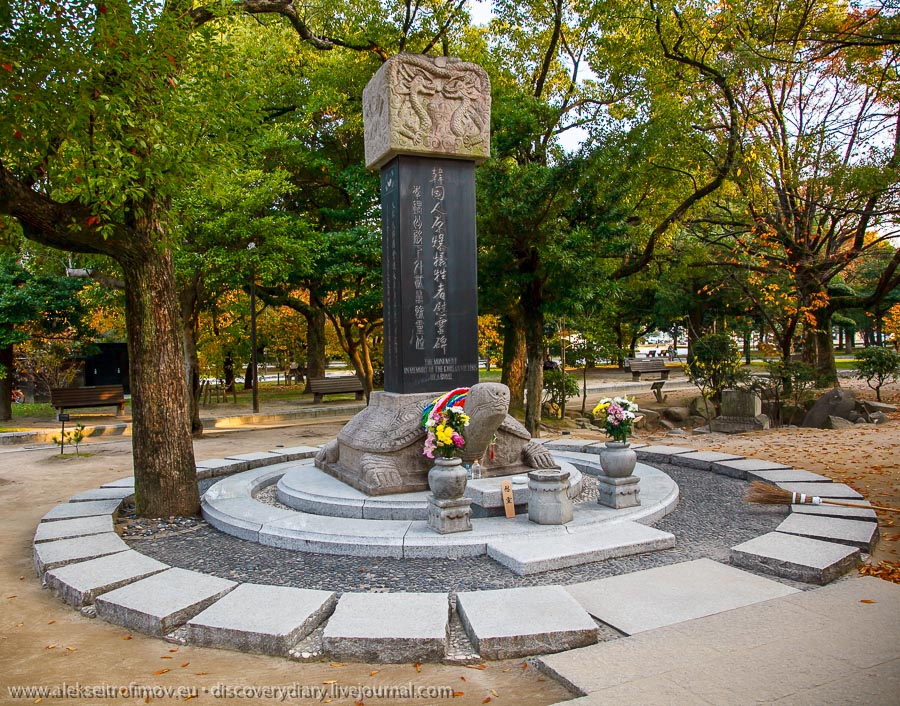 The Peace Museum tells about the Pacific War, the bombing itself, the consequences, as well as the contemporary situation with the atomic weapons. The Peace Museum is located behind the cenotaph. 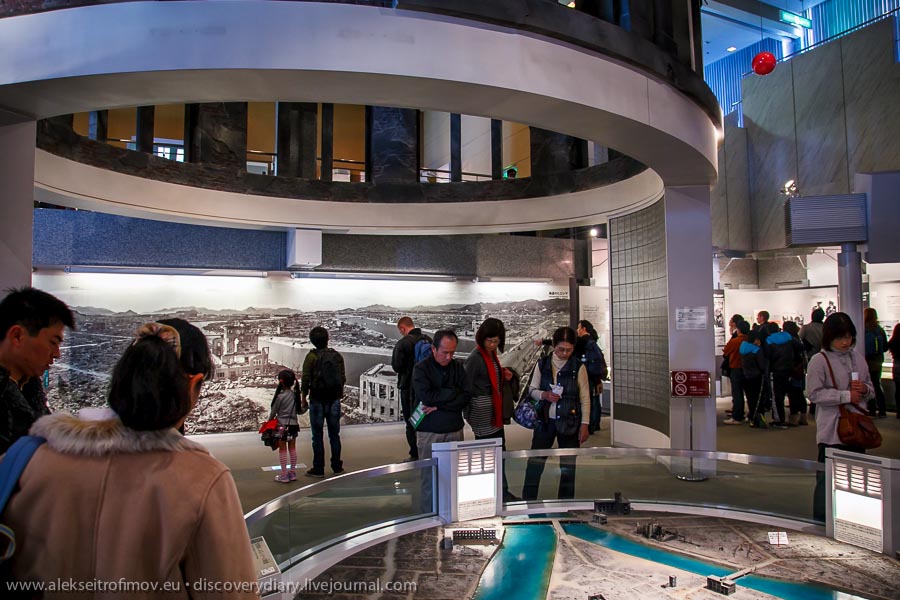 This museum is the saddest museum I’ve ever visited. It does not make any attempts to justify the Japanese and their role in the war. On the contrary, on a number of occasions you could hear the words “due to a mistaken national policy”, “our mistaken national policy”… And yet it is impossible to ignore the fact that most of the victim of a-bomb were women, children, elderly, forced labourers from Korea and China and prisoners of war. The actual soldiers were fighting the Americans and others on the battlefields of Asia.

Emotionally unbearable are the stands where the parents tell about how they are looking for their children after the bombing. And the only thing they find are a little piece of clothing, a burnt shoe or a bent tricycle.

Another model of the explosion, in a different proportion. The ball here represents the wave 1 second since the explosion. 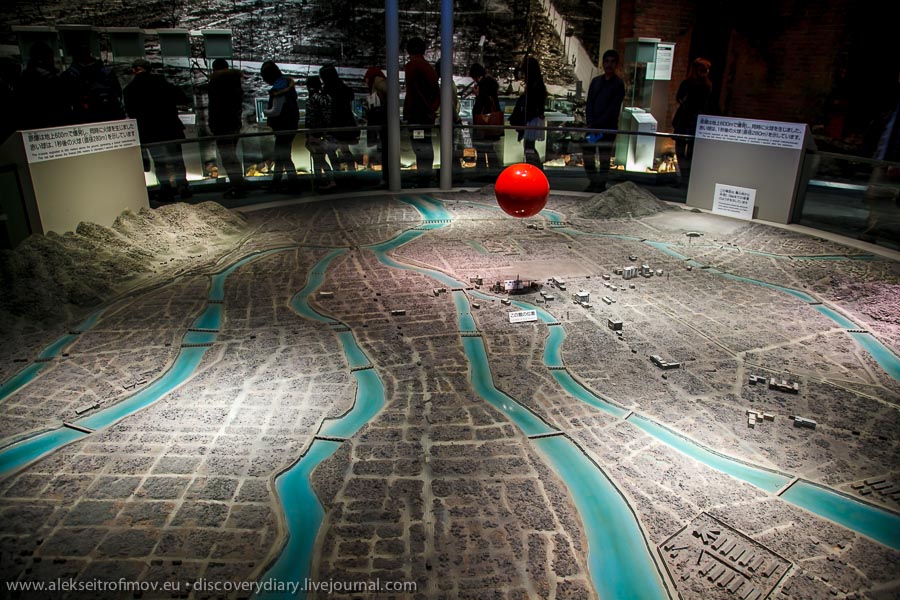 Every time anywhere in the world a nuclear test is conducted, the mayor of Hiroshima sends a letter to the head of the state that conducted it. All of these letters are presented on a giant wall in the Museum of Peace. There are letters to Blair, Putin, various American presidents. I read some of these letters. Each letter is different, which means a new one is written each time. In the last raw there are letters to two leaders only: Barack Obama, Kim Jong-un, Barack Obama, Kim Jong-un… 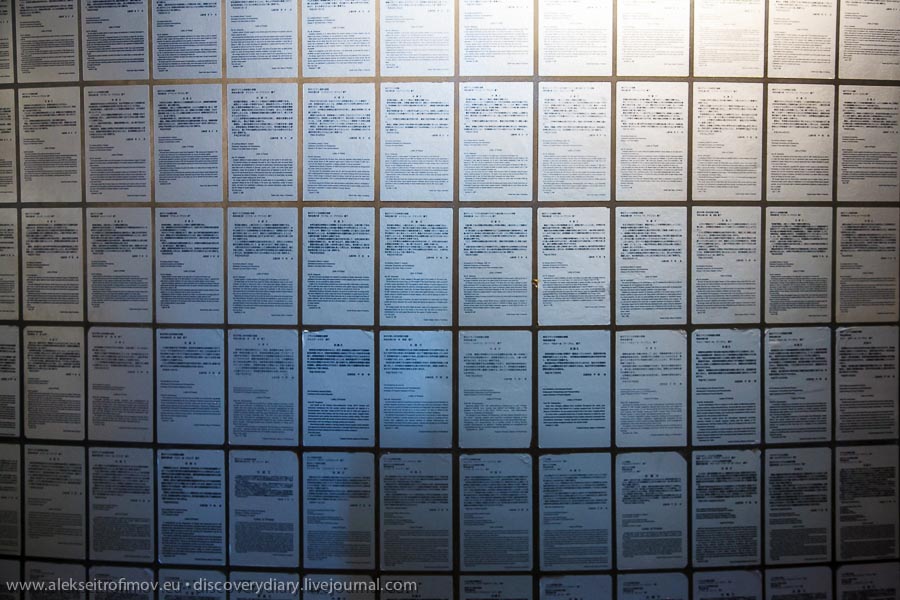