The temple complexes of Borobudur and Prambanan were built in 9th century by rivalling Javanese royal dynasties. First Borobudur was built by the Buddhist Sailendra dynasty. Then about 50 years later the Hindu dynasty Sanjaya built Prambanan not far away. From Jokja you can visit both complexes in one (rather long) day on an organised tour. I found myself in Borobudur very early in the morning at 6am – right at the moment it opens – before sunrise.

Internet is full of information and photos of Borobudur as it is the number one tourist attraction in Indonesia. So I won’t copy paste Wikipedia. My own impression of Borobudur was initially a slight disappointment. It is essentially a large hill circled by concentric corridors. Corridors are filled with bas-reliefs and the walls are full of sitting Buddha statues. But if you have travelled South East Asia and particularly if you have visited Angkor Wat, perhaps you expect something more unusual. This is the first approach of Borobudur: 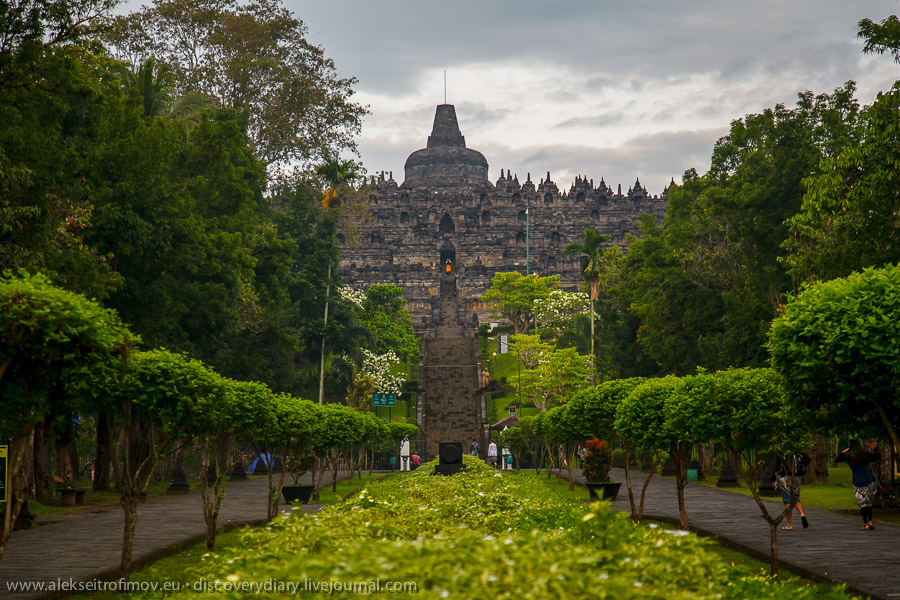 But as you wander around Borobudur in these early morning hours and the sun starts to rise, little by little you do start to feel that there is something special about it. The valley where it is located is surrounded by volcanoes. It is thought that at the moment of building it was located on an artificial island in a lake – representing symbolically the centre of the universe. The lake is long gone, and we don’t even know for sure if it ever existed. But the magical symbolism of a hill in the centre of the world valley persists. 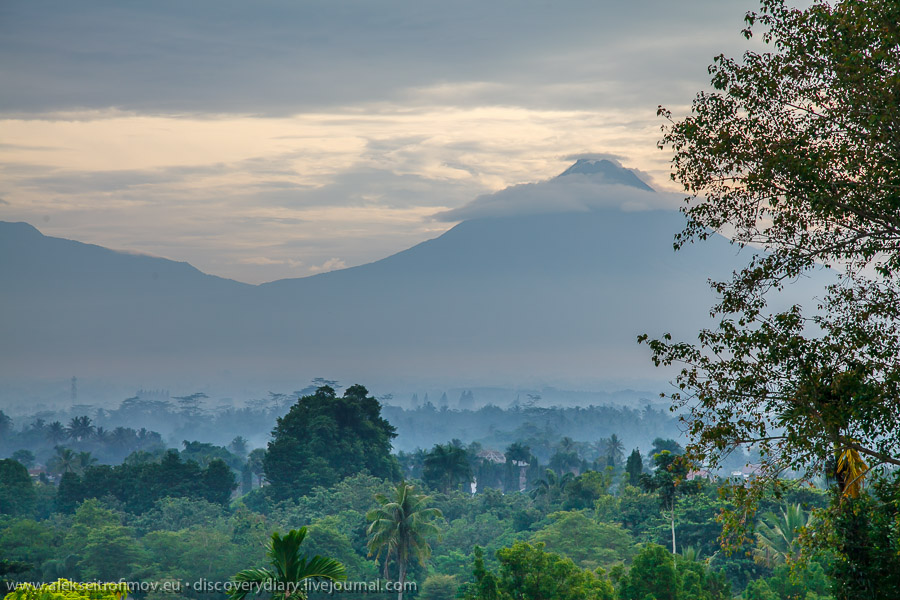 The upper level of Borobudur is filled with stupas. Each stupa contains a Buddha statue which you can just make out if you peer through the narrow openings. 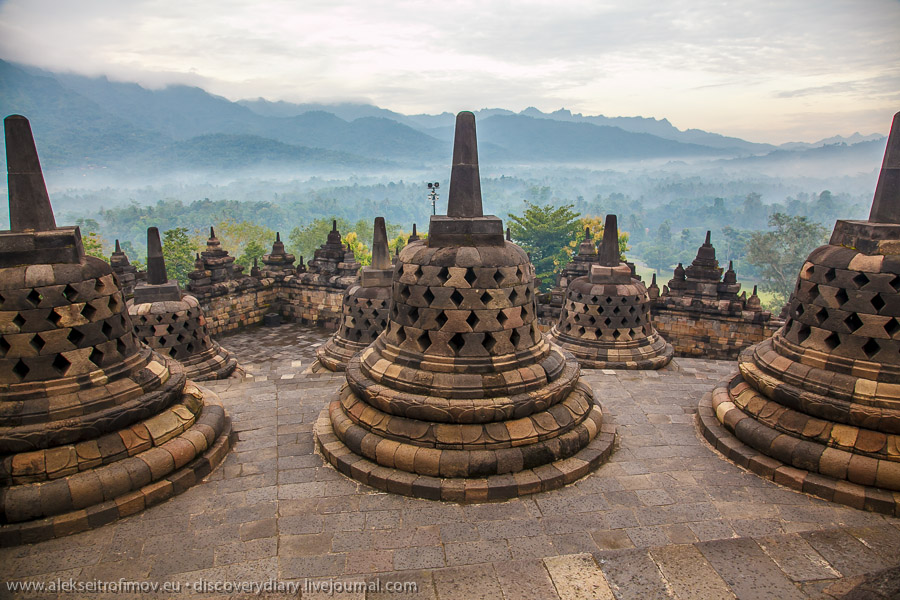 It must be said they are very photogenic, the stupas: 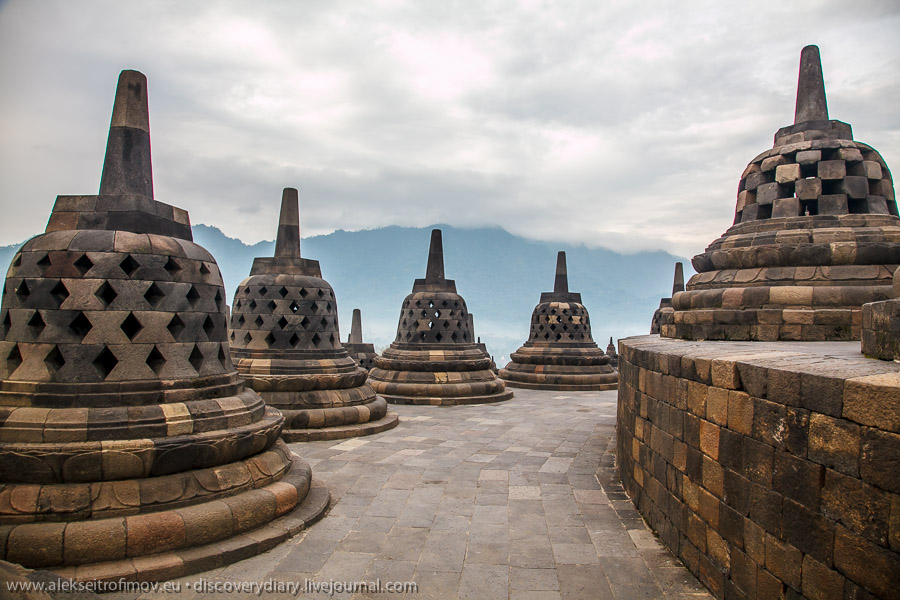 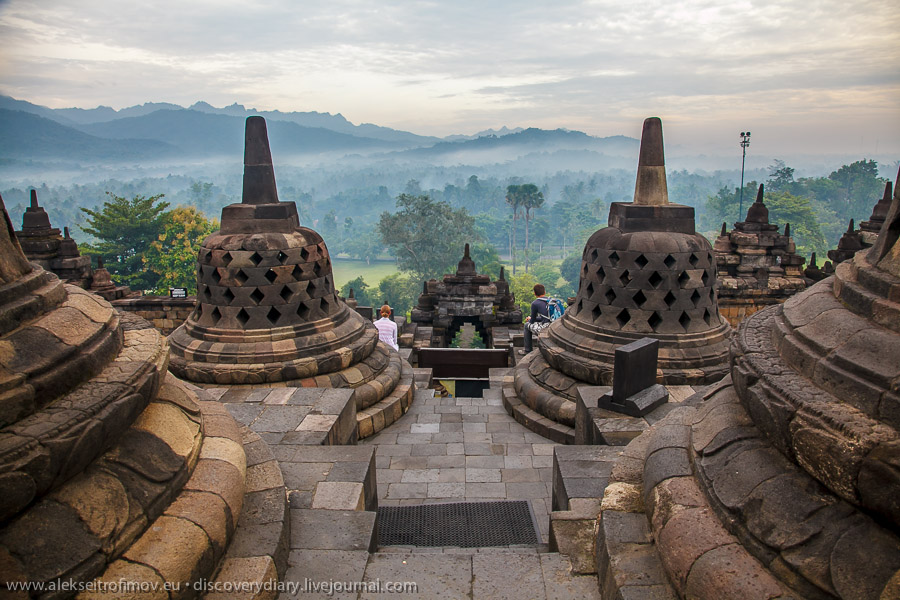 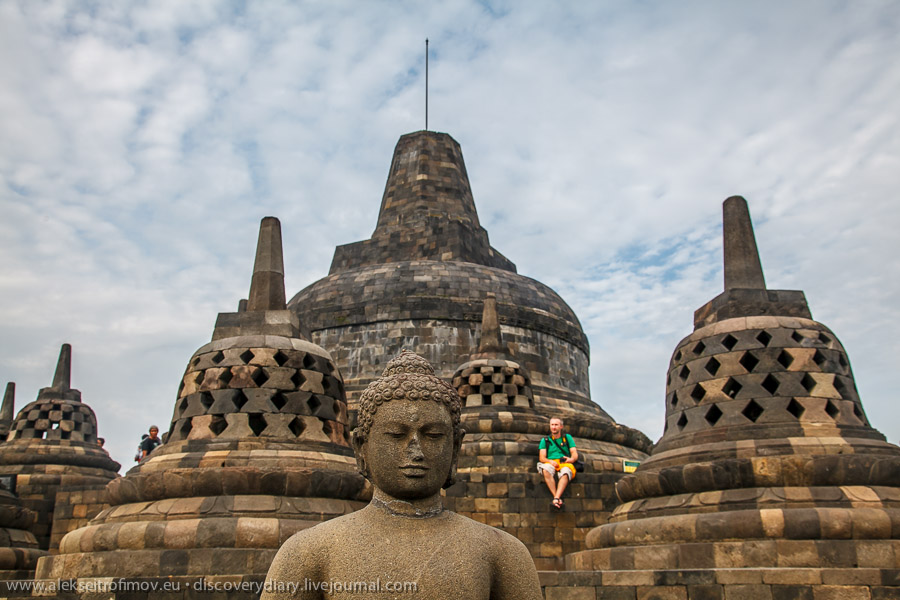 The jungle surrounding the temple adds the mystic feel: 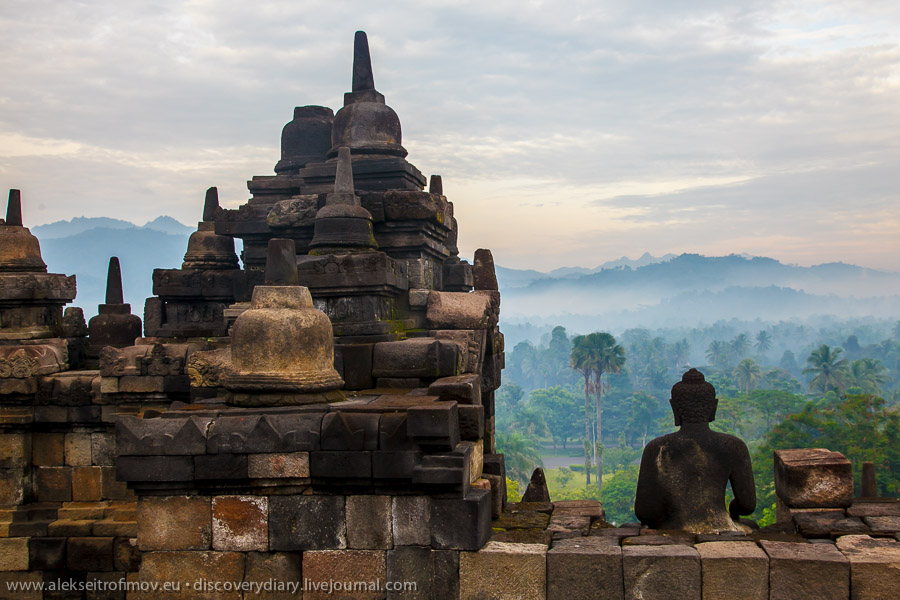 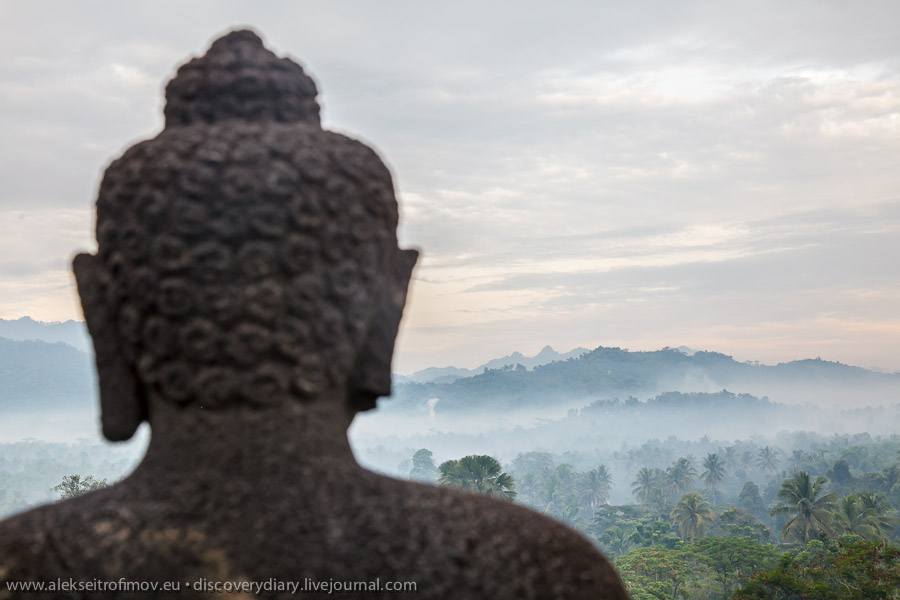 The overview of the temple. The sun has already risen: 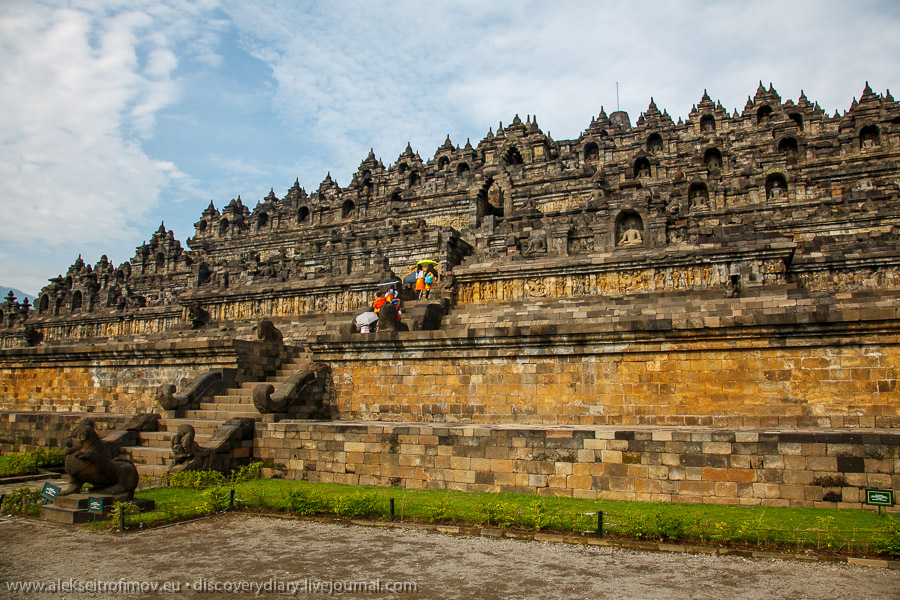 The pilgrims still use the temple: 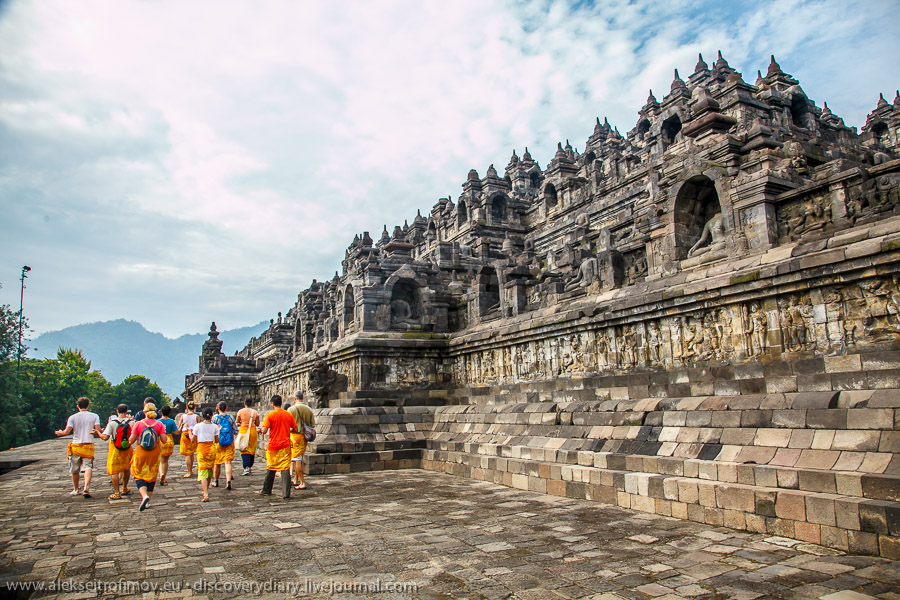 An army of Buddhas: 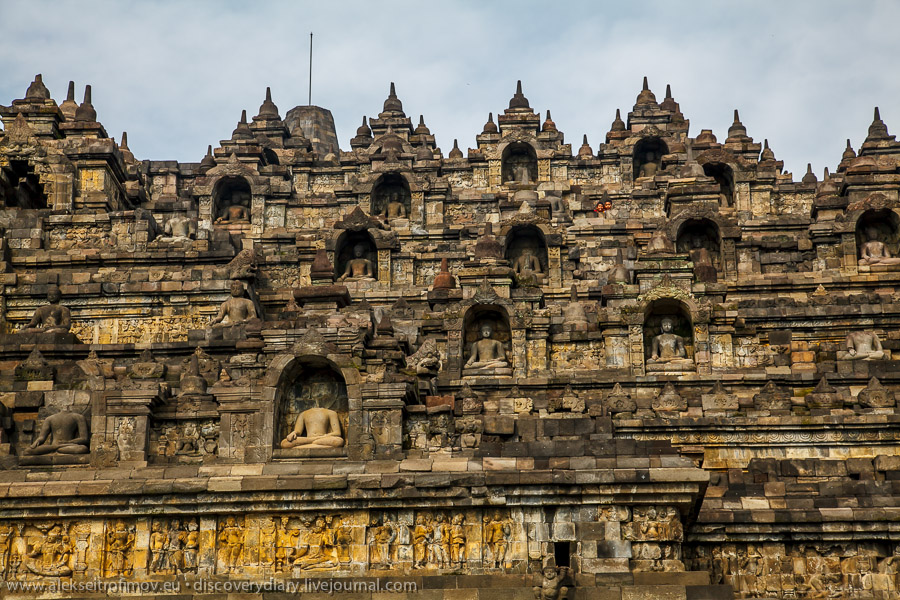 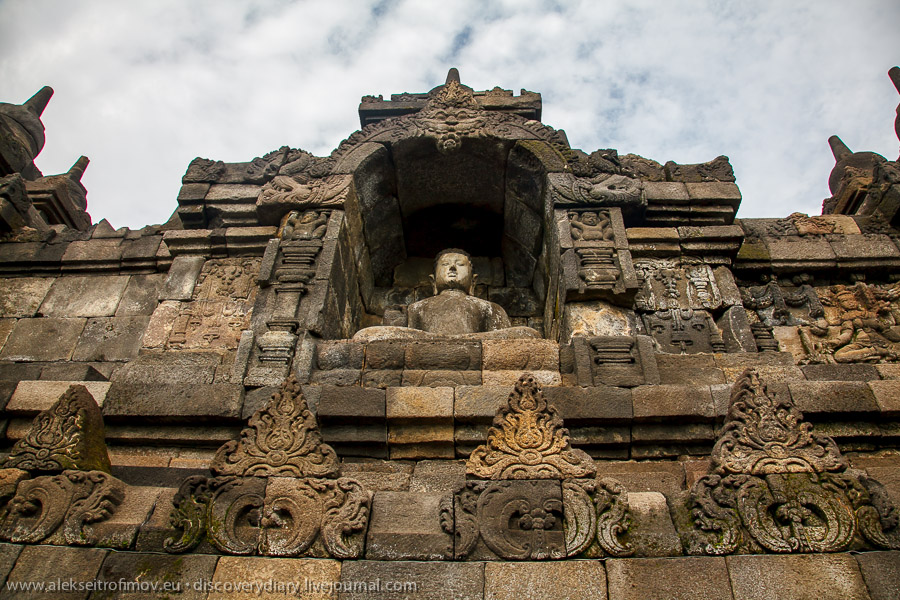 The corners of the concentric corridors are guarded by mystic animals: 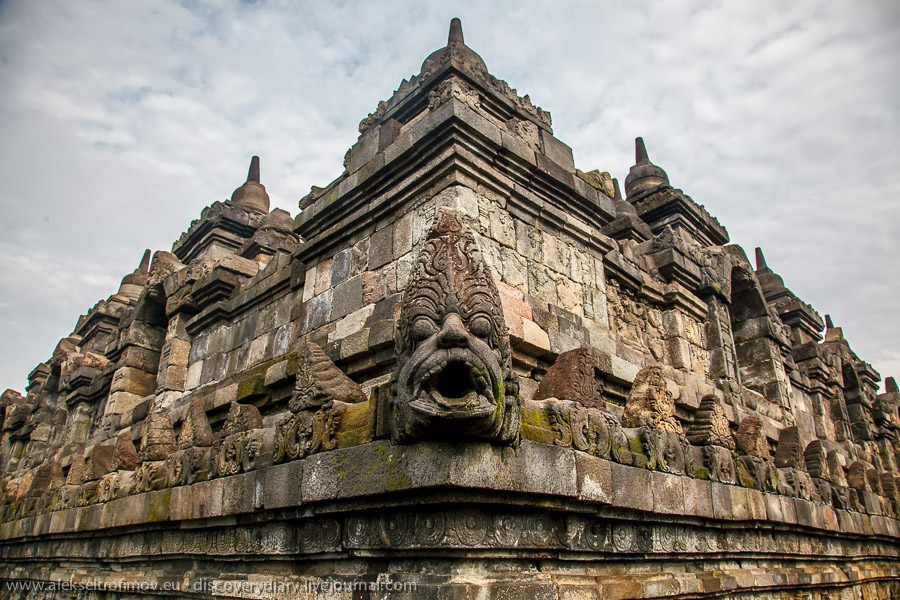 Bas-reliefs in the corridors: 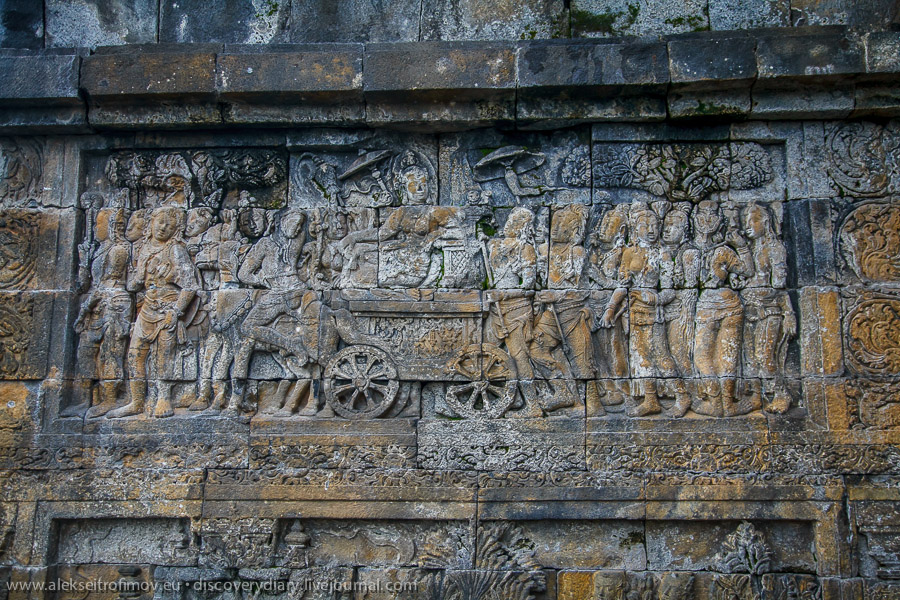 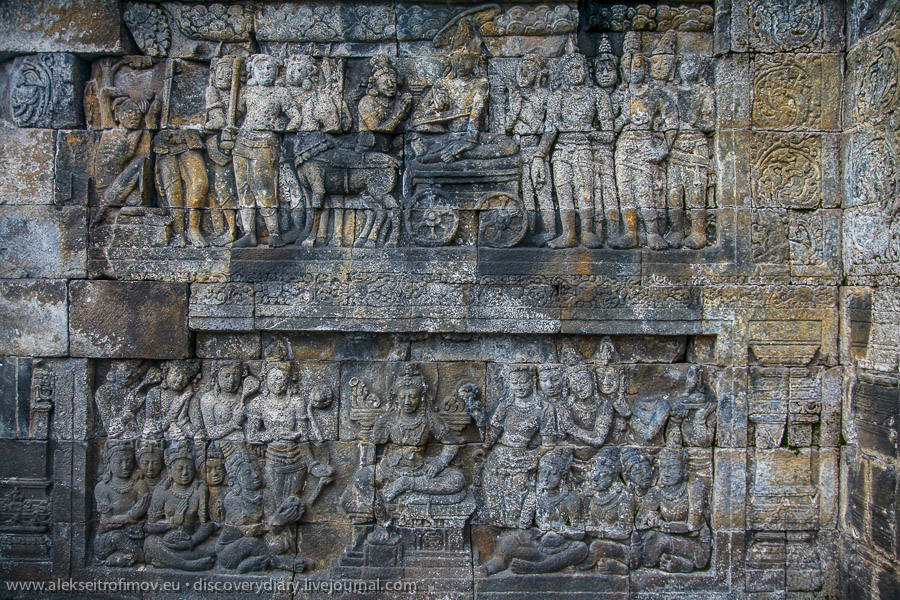 It appears that initially Borobudur was conceived even more grandiose. Archeologists discovered traces of at least one more level, now covered in faceless stone and hidden in the ground. The reasons may include the unstable ground or astrological considerations. In one place the hidden level is now open to our gaze. 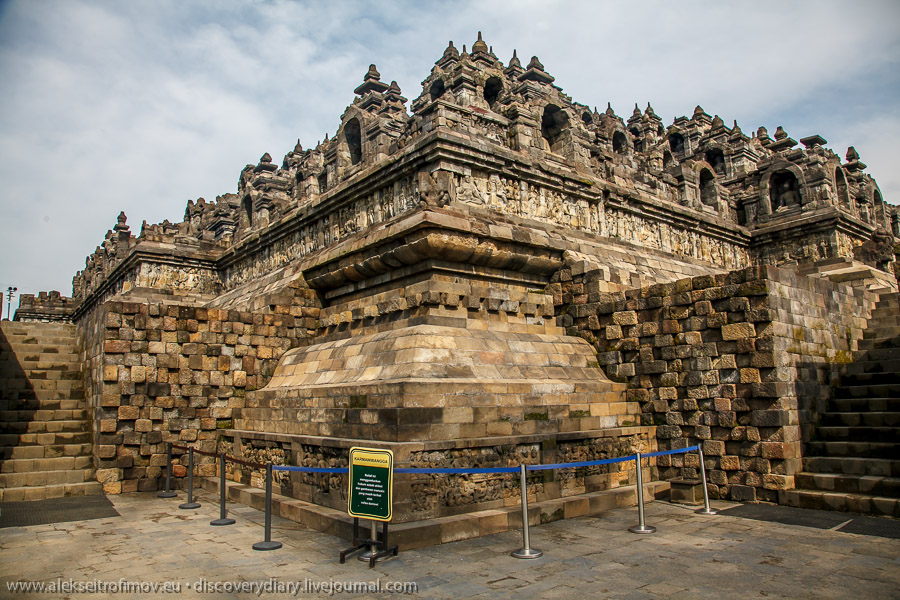 Borobudur is surrounded by a park. At the exit of the park a typically Indonesian mayhem awaits you though – an endless labyrinth of little shops where armies of merchants attack a tourist. I made it out of there in ten minutes – a record. 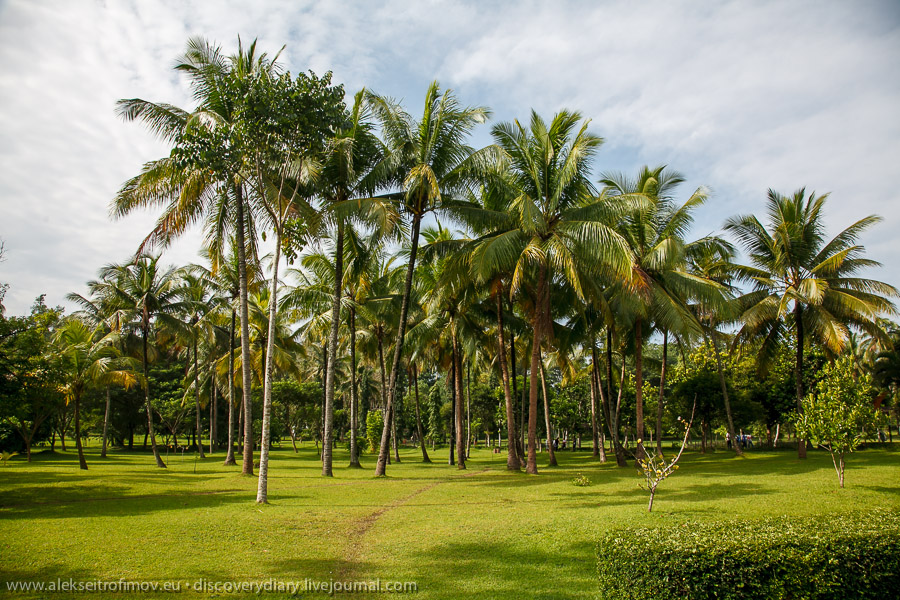 Prambanan is about 50 km away from Borobudur, in the other direction going from Jokja. It is the largest Hindu temple in Indonesia, built in traditional style. 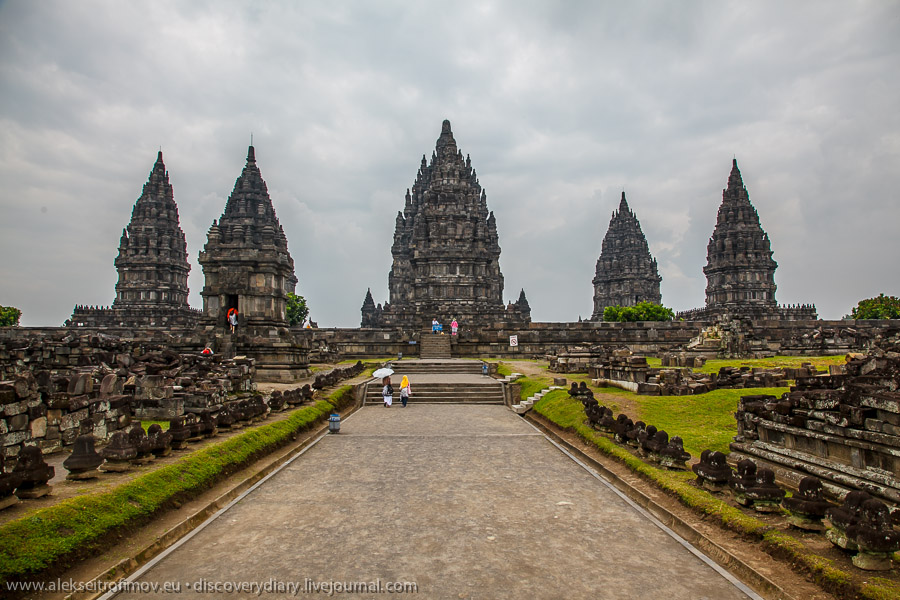 The three main temples in the complex are devoted to the Hindu trinity – Brahma, Vishnu and Shiva. The central tower, the largest, is for Shiva. Apparently the Shiva statue inside has the facial traits of the king of Java who built the whole thing. 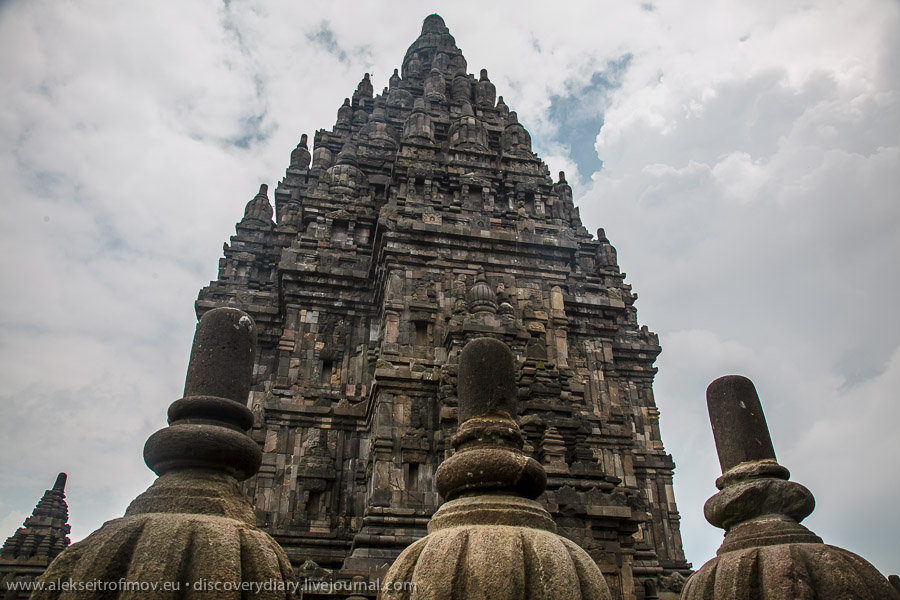 The main tower from a secondary one: 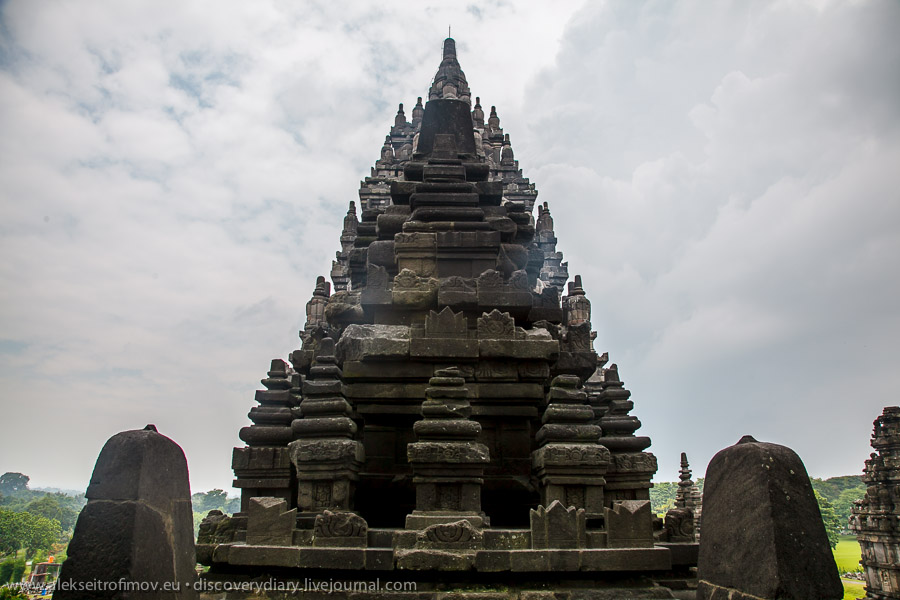 To visit the main tower you are given these helmets – the staircases are very steep: 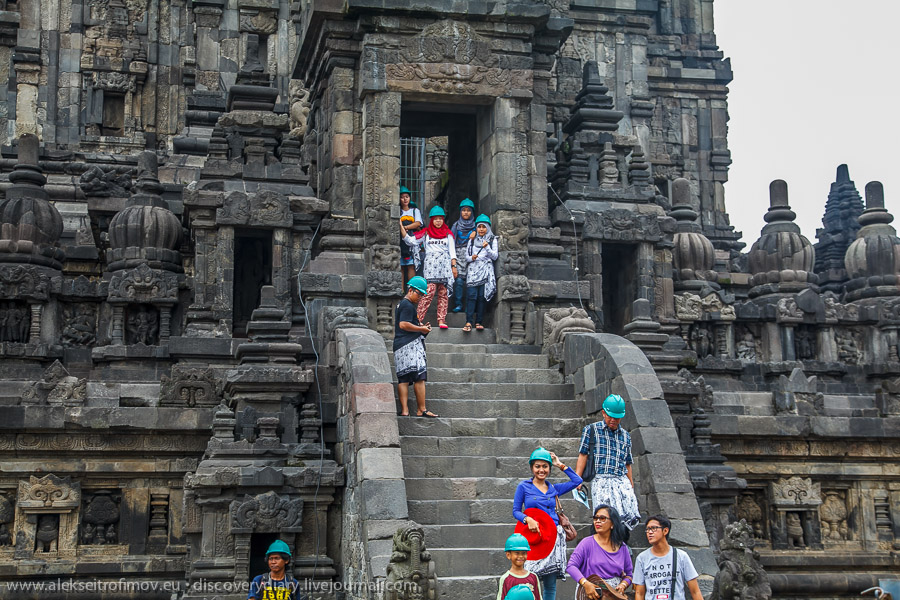 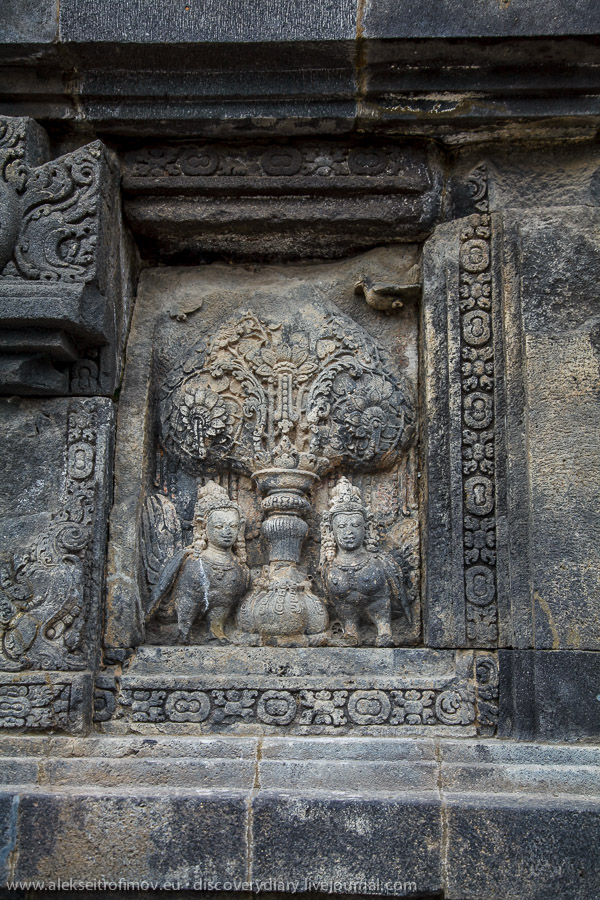 To the North of the main complex, perhaps 15 minutes walking, there is another entirely deserted complex – Sewu. I walked there in solitude despite the midday heat. This one seemed a lot more impressive to me, perhaps due to its seeming isolation: 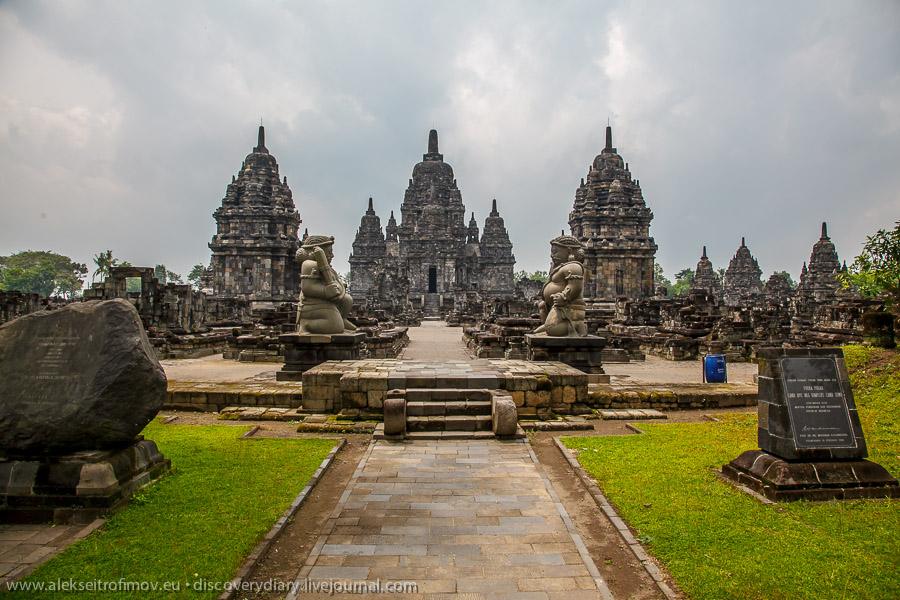 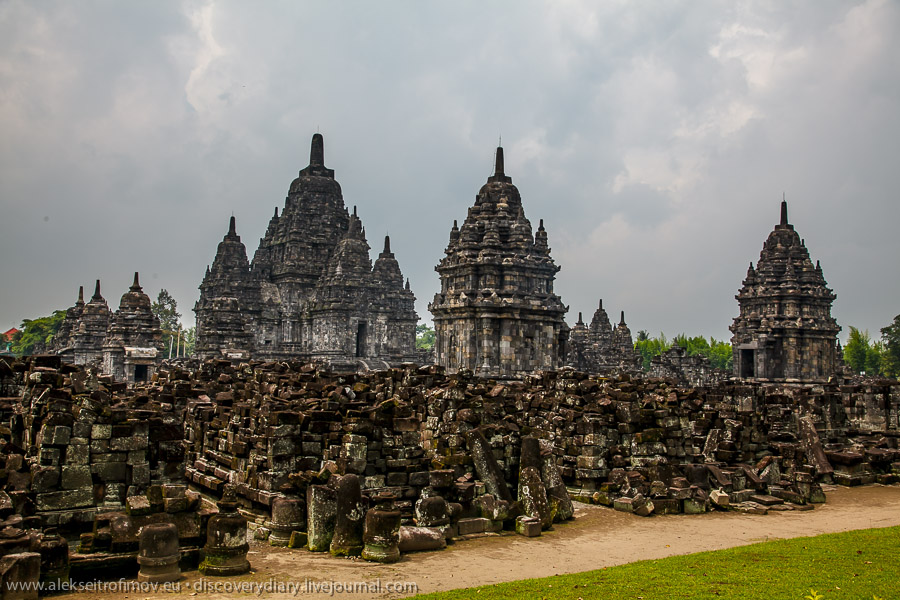 One thought on “Borobudur and Prambanan”