I was drawn by Indonesia as if it were a forbidden fruit. Many of my traveller friends shared quite a negative opinion of the place. I read about the squalid conditions, road chaos and abject poverty reigning particularly in Jakarta. Also Singapore acquaintances professed that Indonesia is “too much”. Thus it was with some trepidation that I bought my plane tickets in the direction of South East. I decided to start in a softer spot – in Yogyakarta. Colloquially referred to as Jogja, it is the cultural heart of Java, and by extension of the whole country, Java dominating the archipelago demographically and politically. Nonetheless I made myself a promise to go to Jakarta, despite all the negativity.

By Indonesian standards Jogja is a calm and pleasant place. Still during my first days there I was driven to helpless rage by a neverending rain of shouts from any and all: “Hey, taxi! Taxi? Transport? Massage? Massage! Motorbike! Transport!” Pretty much any ostensible white tourist is subjected to this treatment. To answer to these characters makes things worse – you get trapped in a whole spiel starting with superficial interest in who you are ending in insistent offers to take you for an excursion for a whole day tomorrow, whole week, whole month… At some point I resolved not to react at all and started wearing headphones to block out the noise, although some just increased the volume or started using the car horns right next to me! With time of course I got used to it and adopted a stoic approach: just ignore.

It is the rain season now in Indonesia. Every day like a clock around 2.30pm the water starts falling from the sky in buckets. The rest of the time too the sky of Java is covered with clouds and the rain can suddenly start. A random Jogja street: 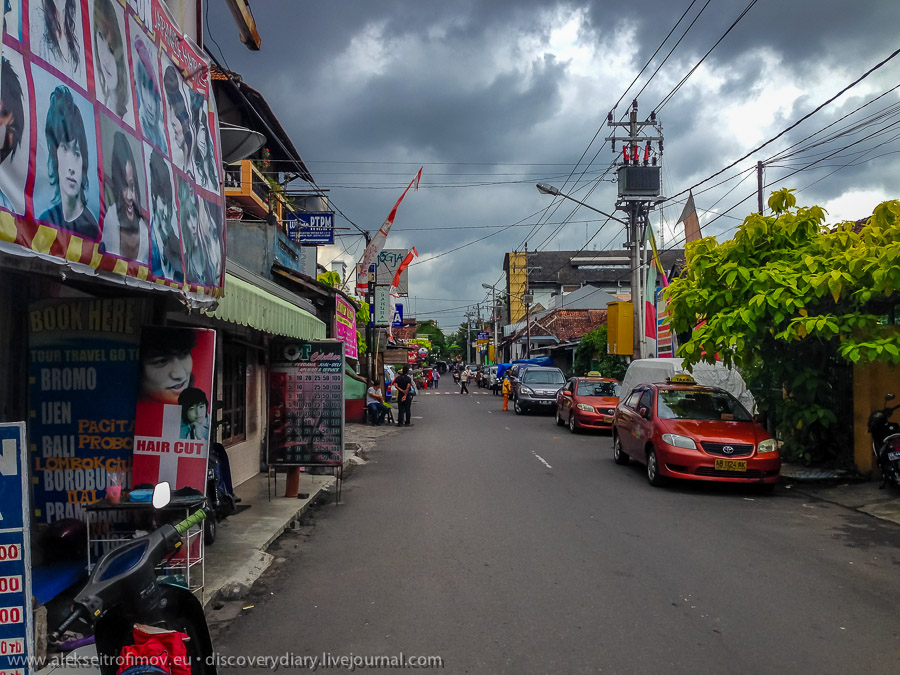 What makes Jogja the cultural capital of Java? The political history of Indonesian archipelago is long and complex. The Sriwijaya empire dominated the region in the early Middle ages, having Sumatra as its base. However its influence did not quite penetrate the East of Java, where two local Javanese kingdoms competed for supremacy. The fight was made poignant by the fact that one kingdom was Hindu and another Buddhist. To demonstrate their superiority, each kingdom built an amazing architectural monument that remains Indonesia’s finest to this day: the Buddhists built Borobodur and the Hindu Prambanan. Both are in close proximity to Yogyakarta. The competition was resolved peacefully – a Buddhist princess married a Hindu prince and the two dynasties merged. As a consequence, elements of both religions were interspersed and a climate of religious tolerance ensued. Ironically later Java was conquered by Muslim sultanates from the West and the ancient Hindu nobility escaped to the East to the island of Bali, which keeps the Hindu traditions to this day, being the only Hindu island in Indonesia (and the whole world outside of the Indian subcontinent).

Apart from being in the centre of Javan Middle Ages history, Jogja is also a capital of a Muslim sultanate. After World War II the Indonesian nationalists led by Sukarno declared independence and waged a war on the Dutch colonisers who tried to regain Indonesia following the Japanese occupation. In that independence war the sultan of Yogyakarta played a key role as he lent his resources, prestige and palace to the revolutionaries. Consequently while the Dutch held Jakarta, Yogyakarta played the role of the Indonesian capital for several years. As the revolutionaries won the war and independence, the sultan was rewarded with a special status and numerous privileges, which he still retains.

The palace of the sultan – Kraton – is one of the main attractions of Yogya. Don’t expect the Hermitage-like opulence though. These are the internal gates. The old lady in front is my volunteer guide. You are assigned a free guide as you enter the palace. (Of course I tipped her at the end of the guided tour as this is the economic rationale.) 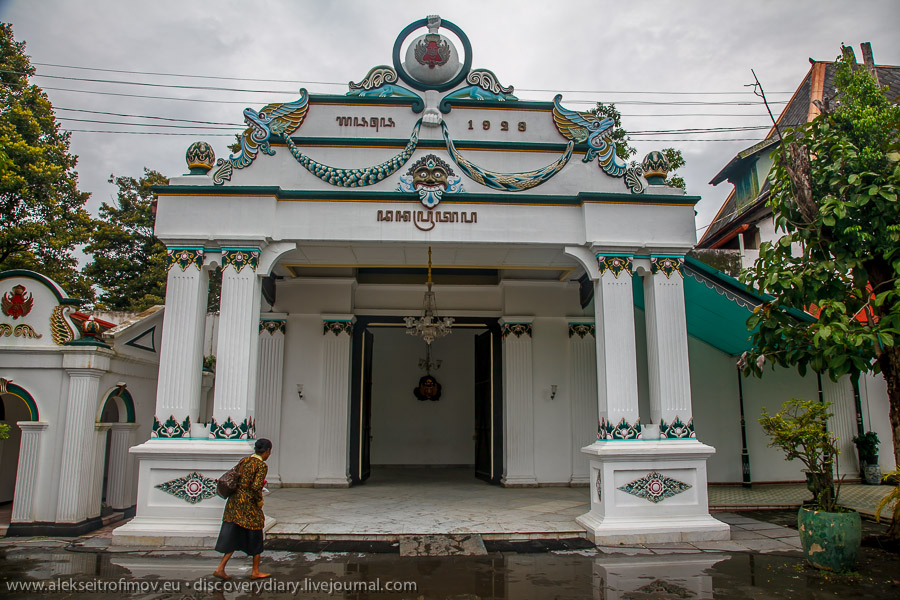 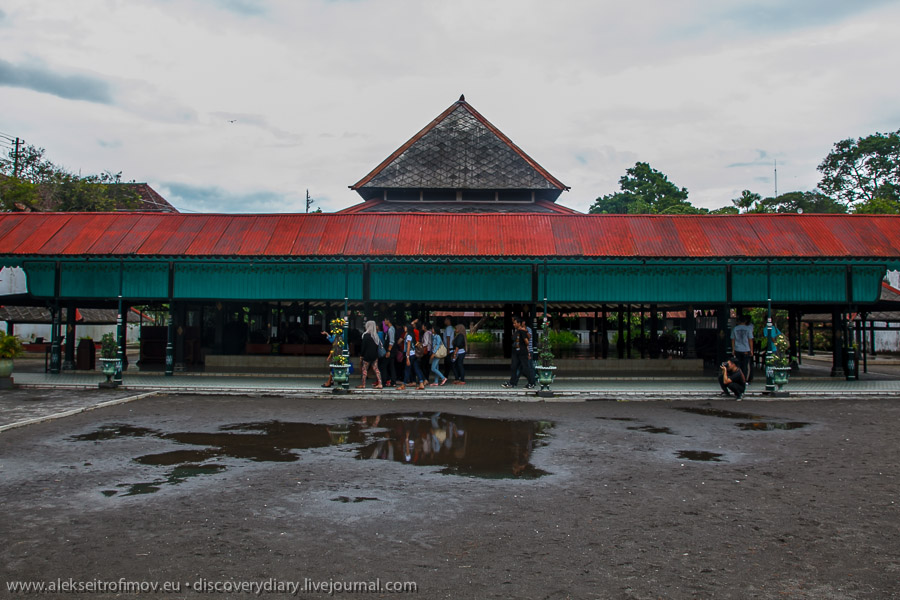 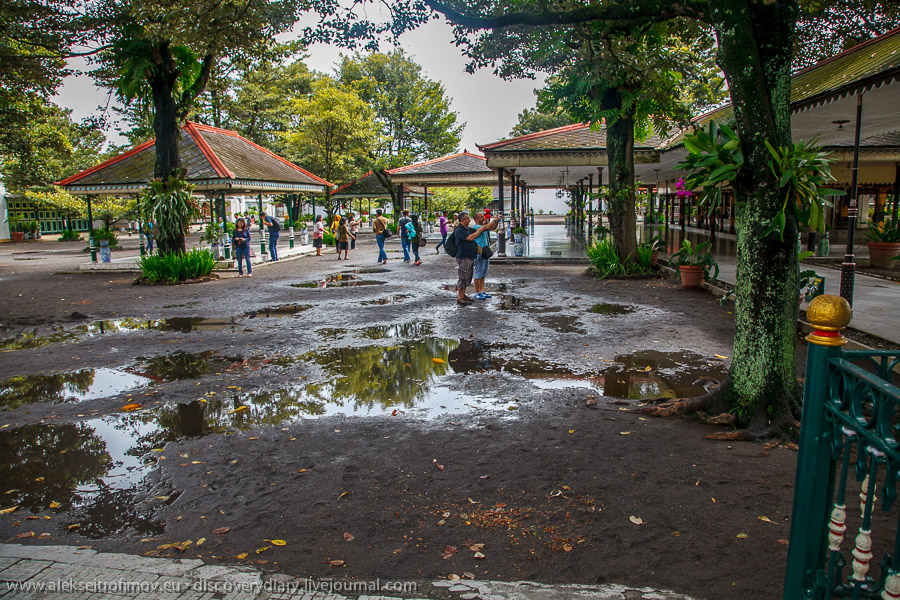 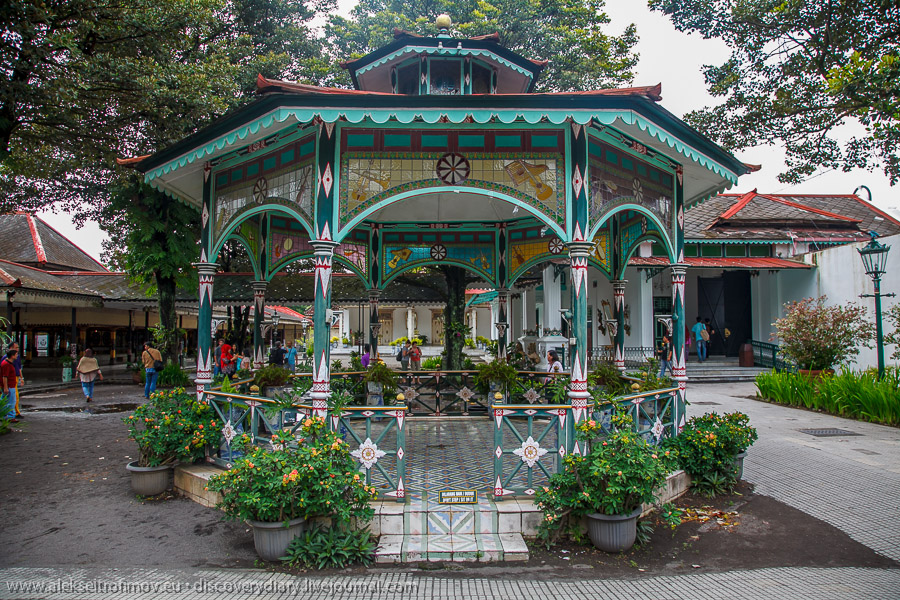 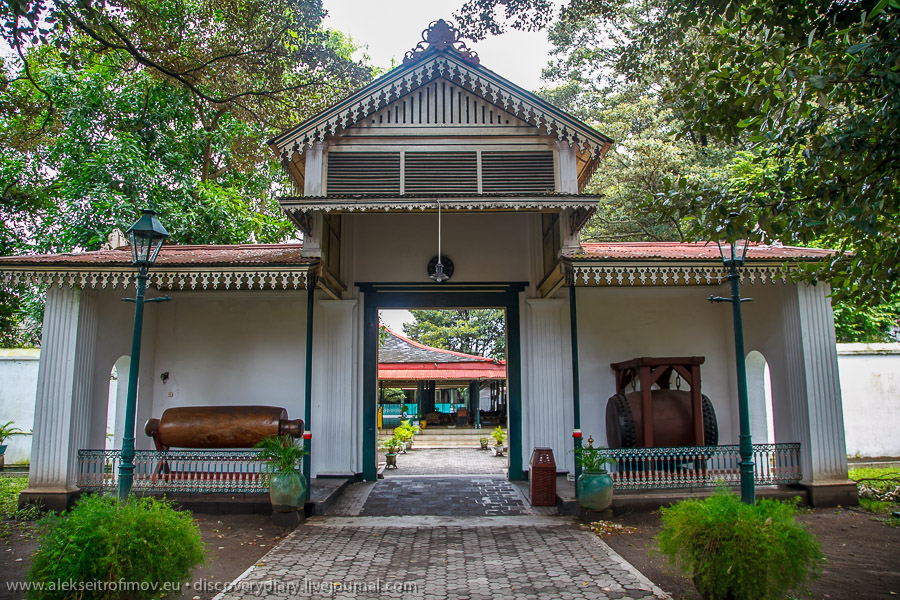 The guide explained in detail the symbolism of various emblems inside the palace. This sign for example contains the symbolic representation of the year of the founding of the dynasty in the Javanese calender (which is entirely different of any other calender). Each animal corresponds to a number. 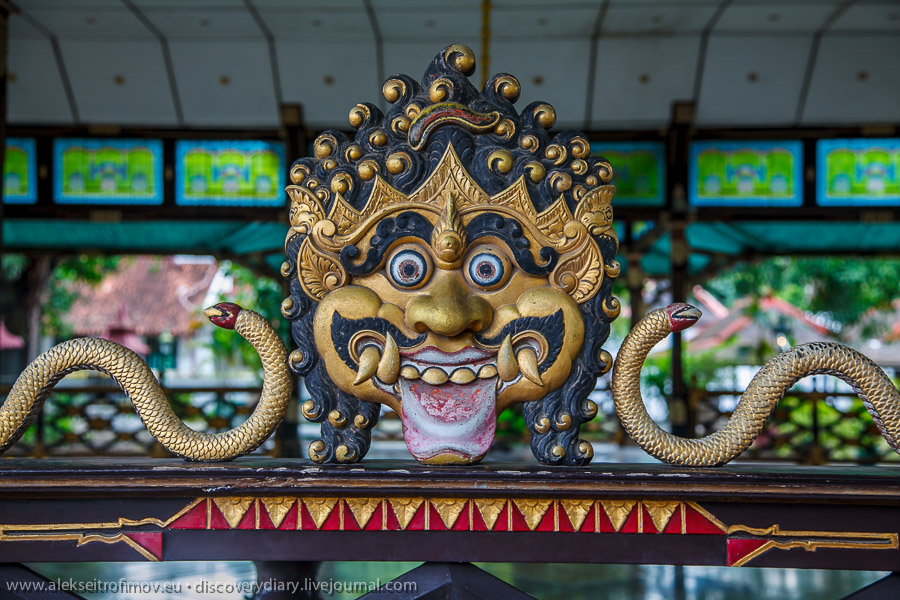 The sultan’s coat of arms. Each element has a meaning, I remember in particular that the pointed ears symbolise wisdom. 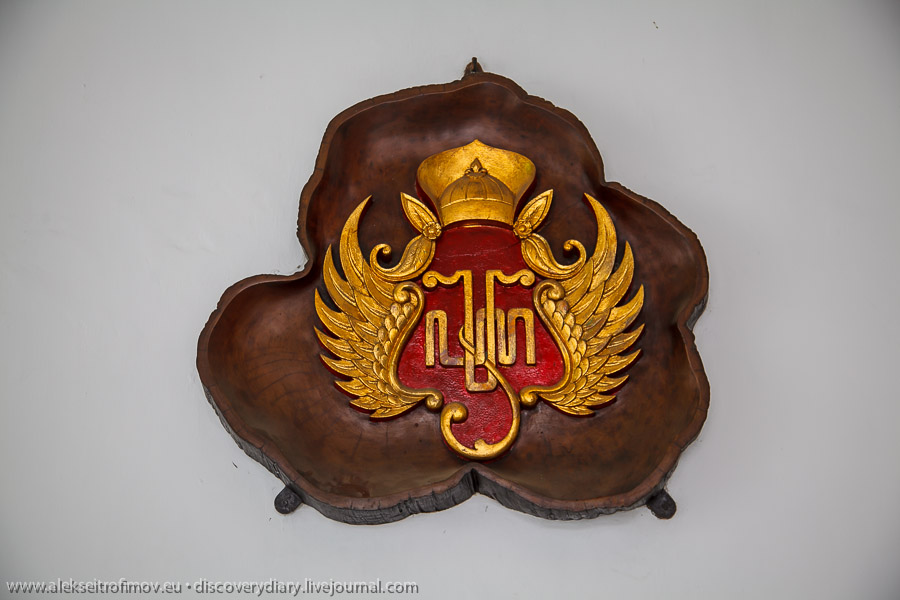 A ceremonial hall in the main courtyard used for the sultan’s marriages (he’s entitled to more than one wife, although the last sultan has not used this privilege) and his relatives: 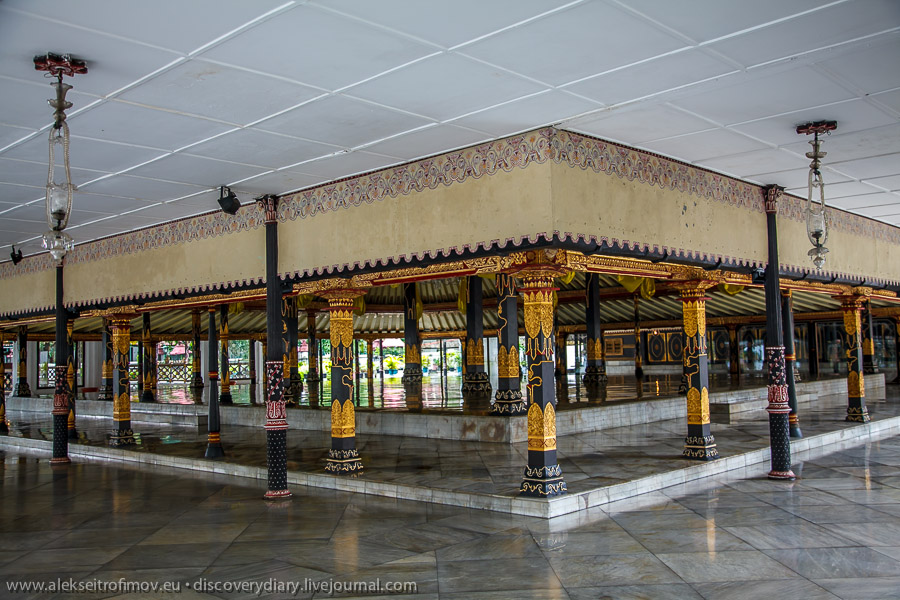 Various ceremonial garb in other halls: 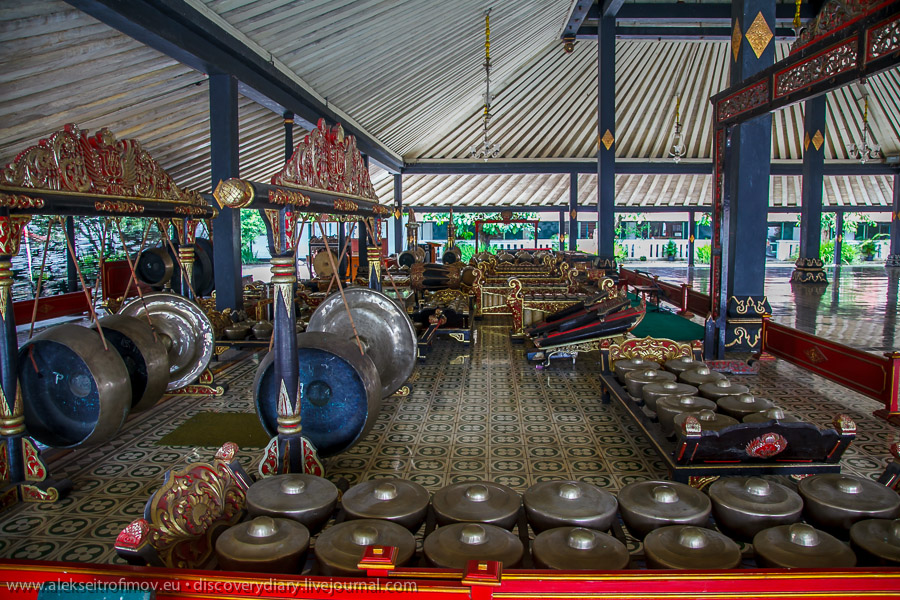 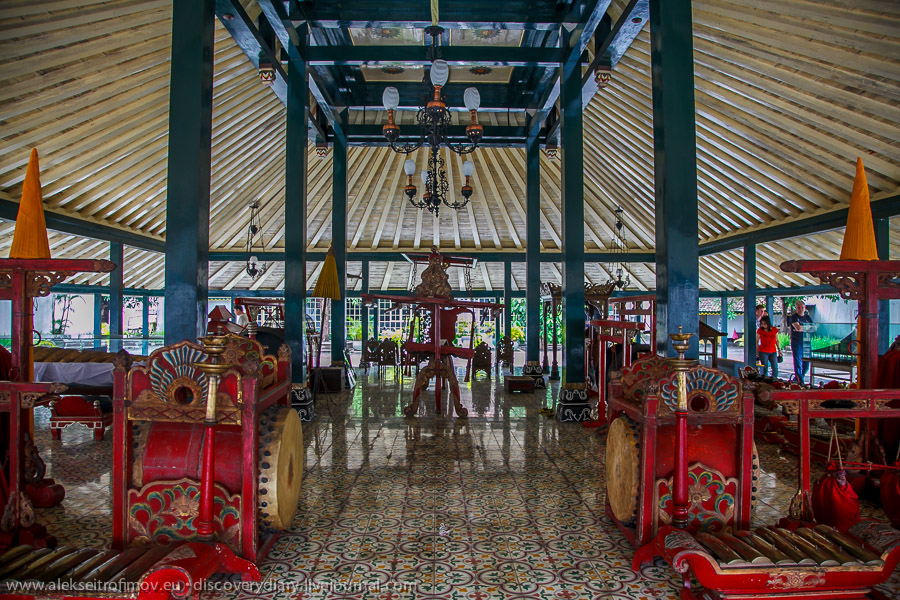 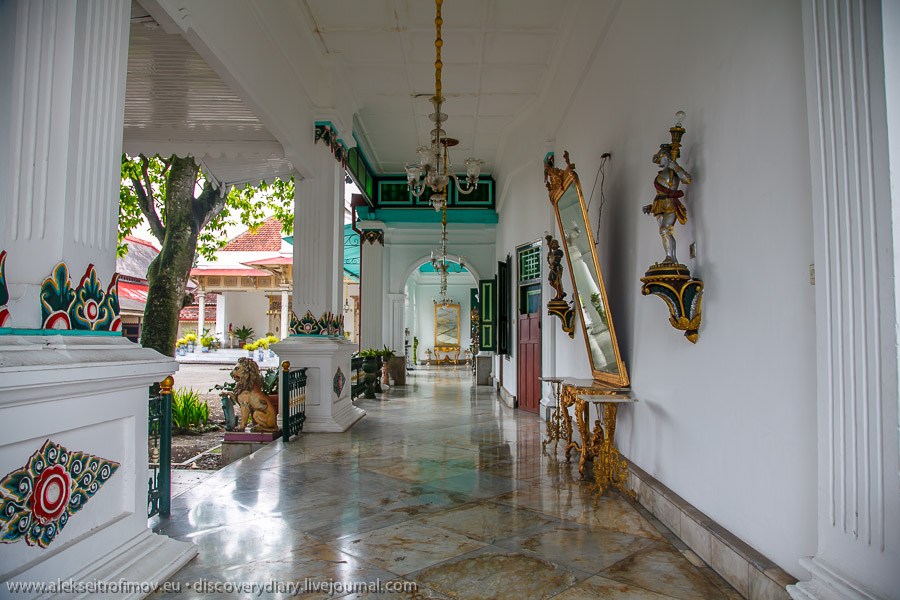 Inside the palace there is a kind of museum devoted to the tenth sultan – the one who took part in the independence struggle and ended up as Indonesia’s vice president under Sukharto. The current sultan – number 11 – is his son. 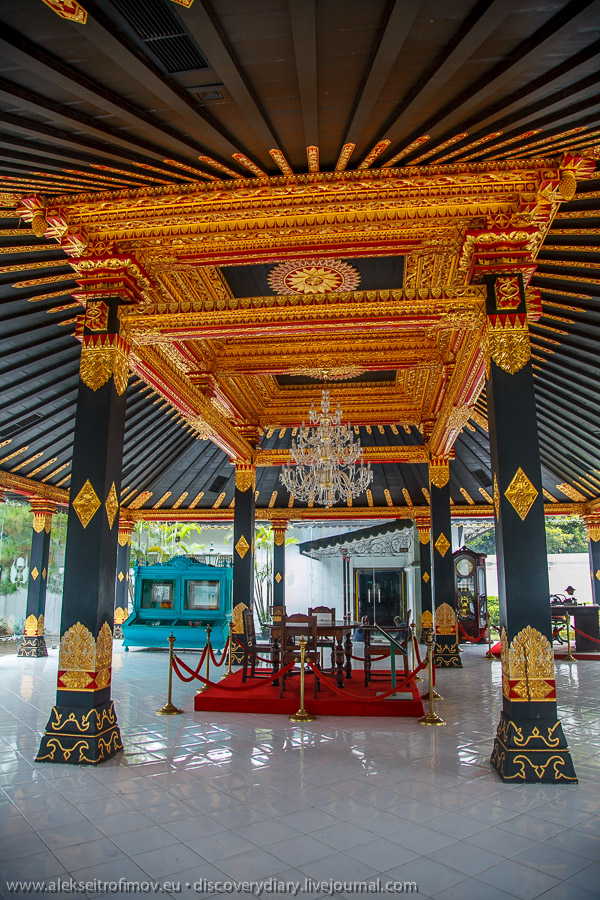 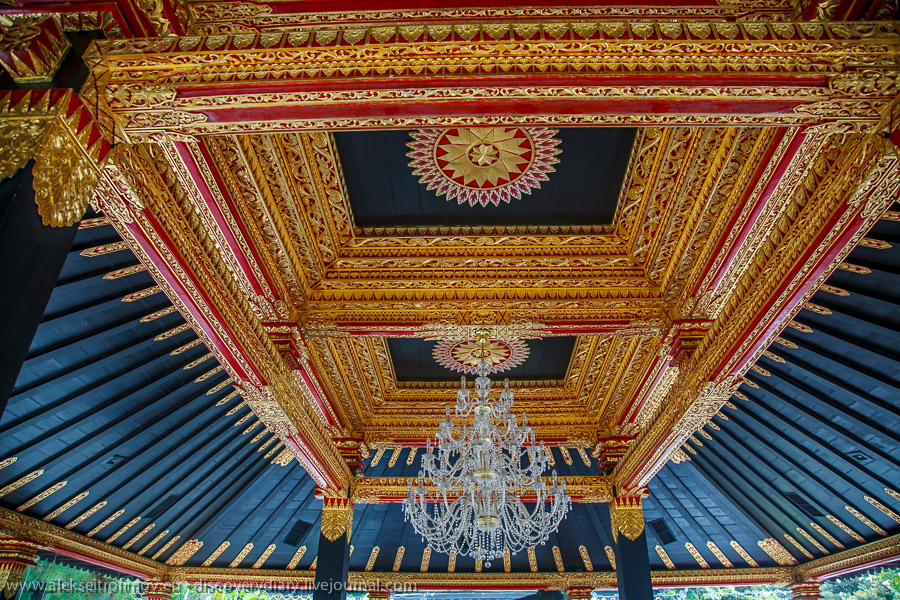 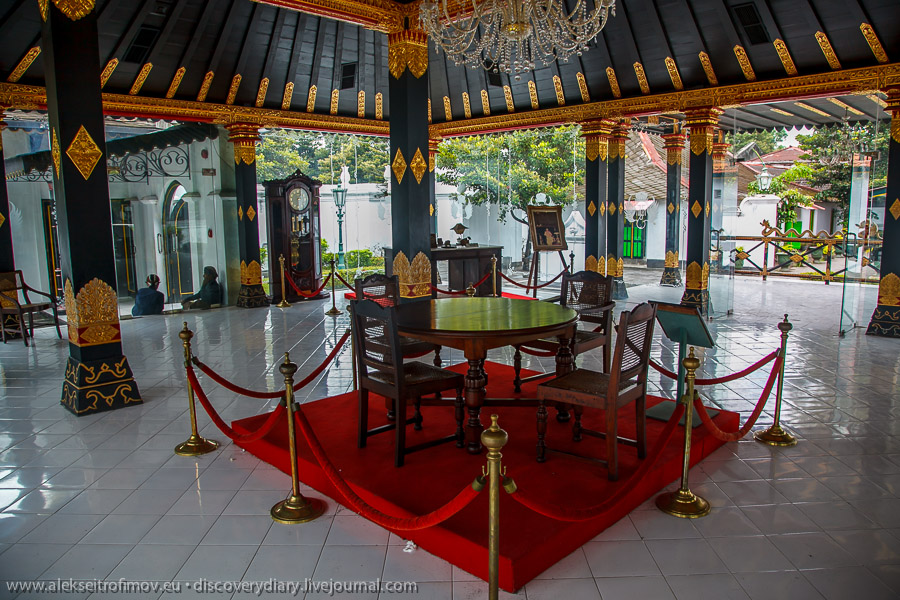 Sultans’ official names are so long and complex that they are quite impractical, particularly for foreigners. My guide referred to the sultans by their number in the dynastic order. Number 10 was quite an interesting personage. His childhood photo, on which he seems to foresee the historical responsibility that awaits him. 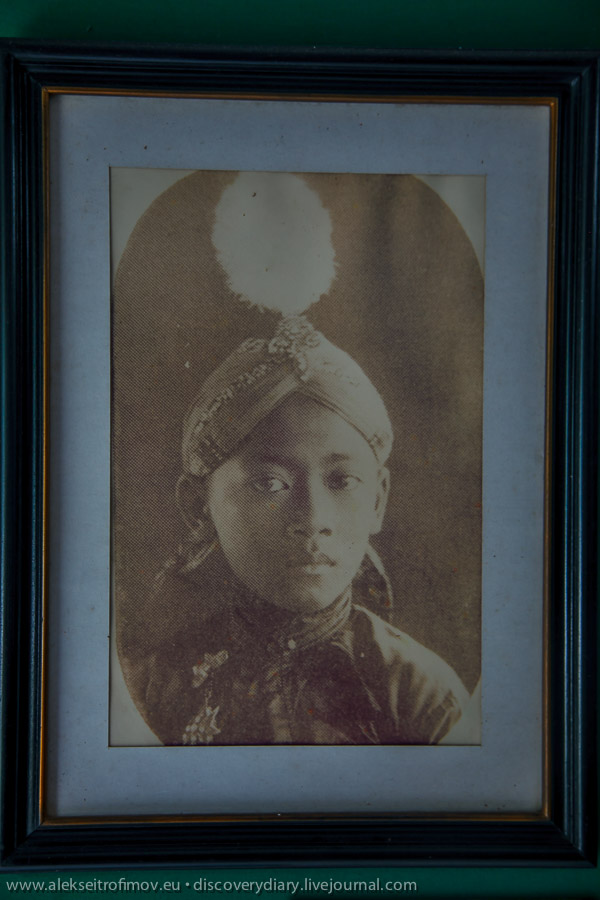 His stylised portrait. Note the ears (wisdom symbol, as you remember). Reminded me of how elves were represented in the Lord of the Rings movies. 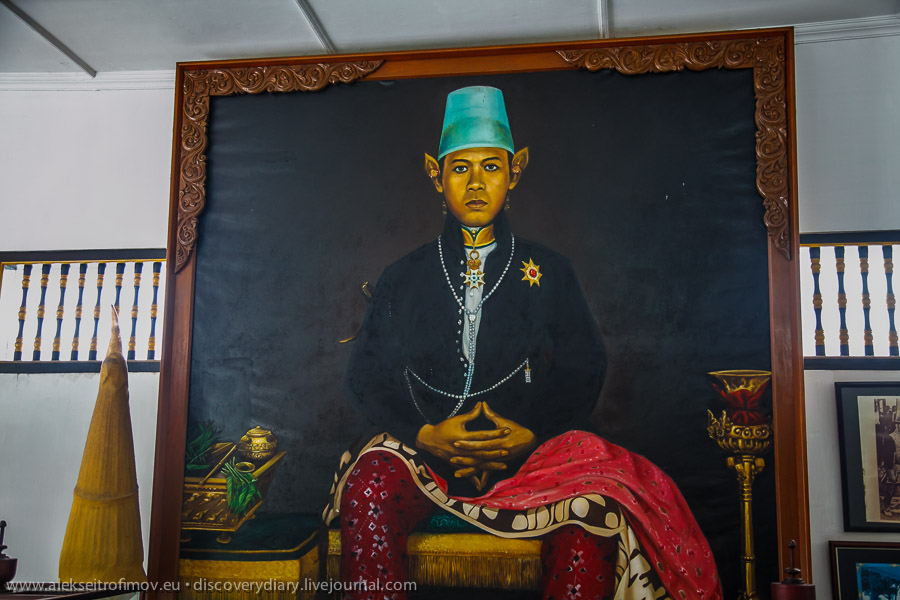 The only tangible heritage of the Dutch colonisers in Yogya is Vredeburg fort. Today it houses a rather austere Independence Museum, full of very uniform exhibits explaining how each successive group within Indonesia’s population fought for independence. Nothing Dutch there except for a café. 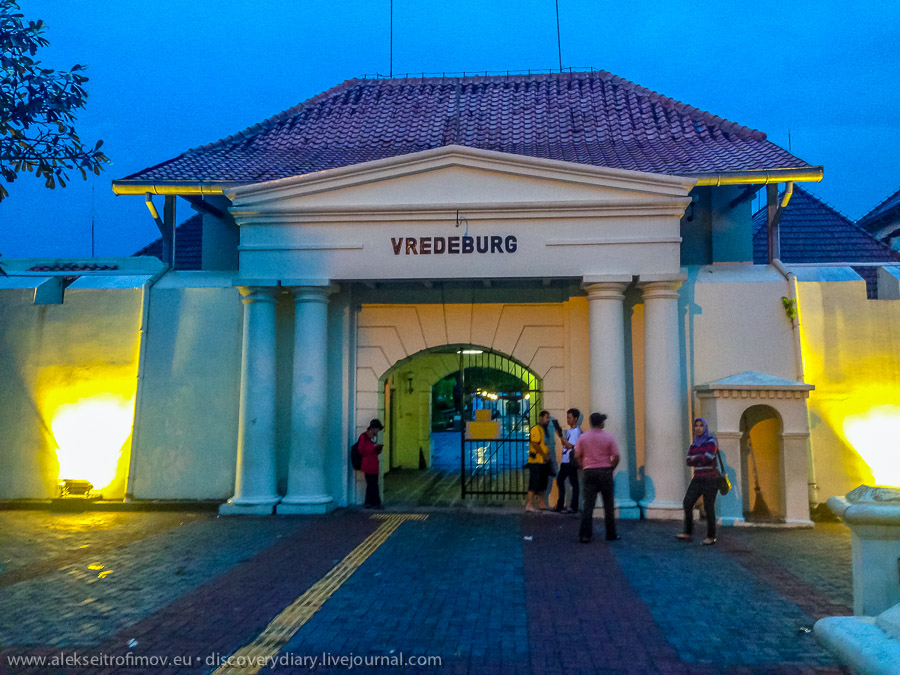 Another of Yogya’s attraction is the Water Palace. One of the Middle Ages sultans built it as a harem. The legend says that while his many wives enjoyed themselves by the pool, the sultan climbed the tower and observed them from above, eventually settling for the one he would spend the night with. 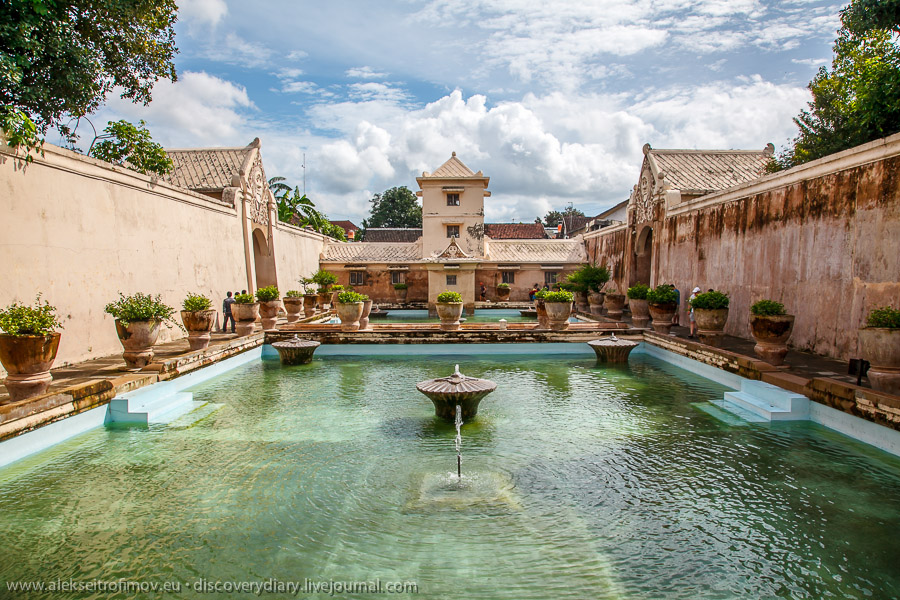 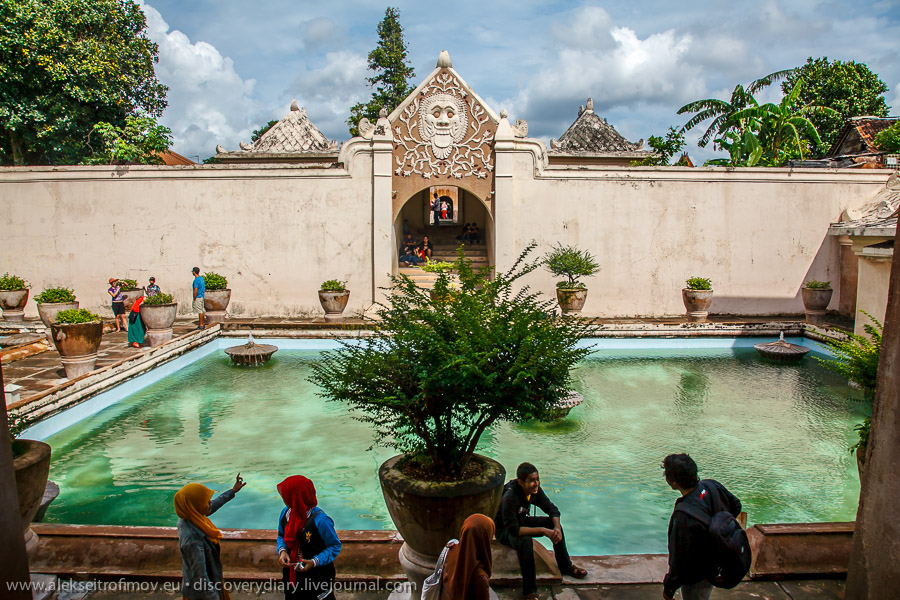 The view from the tower, as the sultan would see it in the days of yore: 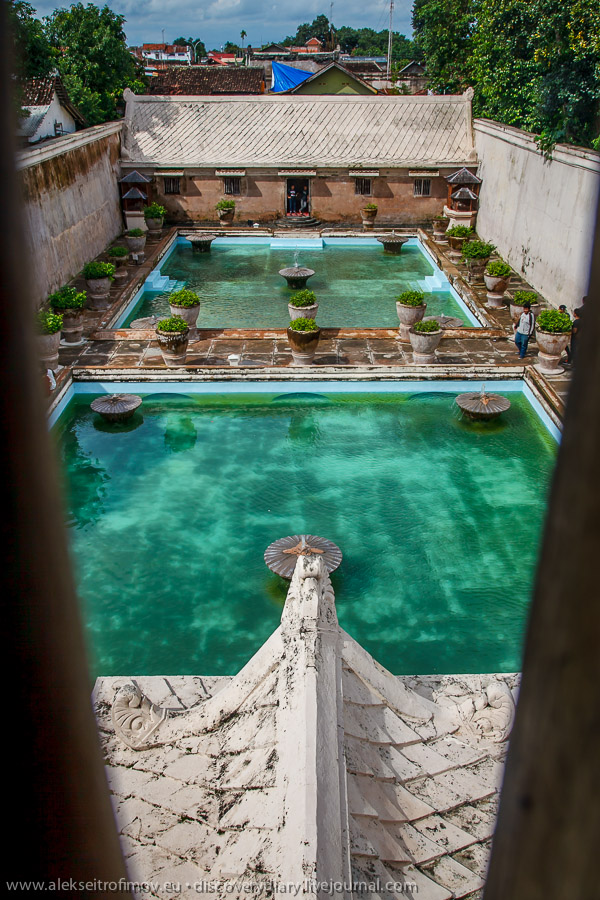 A modern visitor takes her repose by the water: 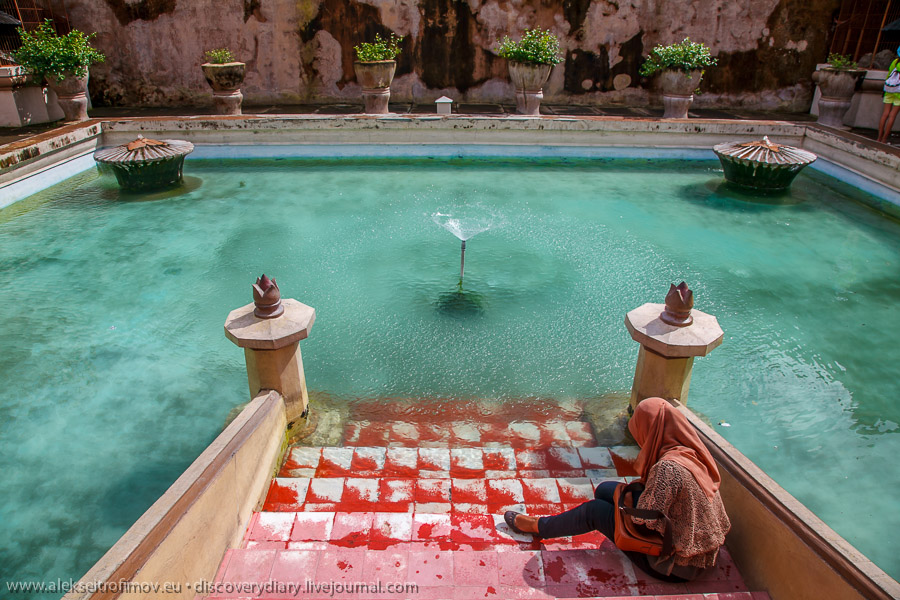 One thought on “Yogyakarta”