Right now I am in Sydney. This was the Mardi Gras weekend – the weekend when one of largest gay prides in the world takes place. For those who’ve never seen a gay pride, if there still are such people, it looks as follows. The main street of South East Sydney – Oxford Street – is closed for traffic. The spectators are watching from behind the barriers the parade which consists of marching groups and floats, i.e. large vans turned into standing platforms. Every float or group usually corresponds to an organisation or to some political cause. For example this time in Mardi Gras there were separate delegations from the Australian Army, Fleet, police, Airforce, Labour party, Amnesty International, all kinds of gay organisations, sport clubs, large companies such as Google. The political floats demonstrated a whole range of causes – from global warming to local Australian issues such as deportation of migrants. The parade is opened by the most colourful group of all – Dykes On Bikes. As the name suggests, we’re talking about a group of hard rock attired lesbians roaring through Sydney on Harley Davidsons.

People started taking places along Oxford Street as early as 1pm, although the official kick off of the parade is at 7. They would bring portable chairs or plastic boxes and sit by the barrier. By 7pm there were so many people on both sides of the street that you could not see anything at all from behind their backs – particularly as the back rows would stand on the plastic boxes to see better. This is how the crowd looks about 45 minutes before the kick off of the parade – when you could still squeeze by. 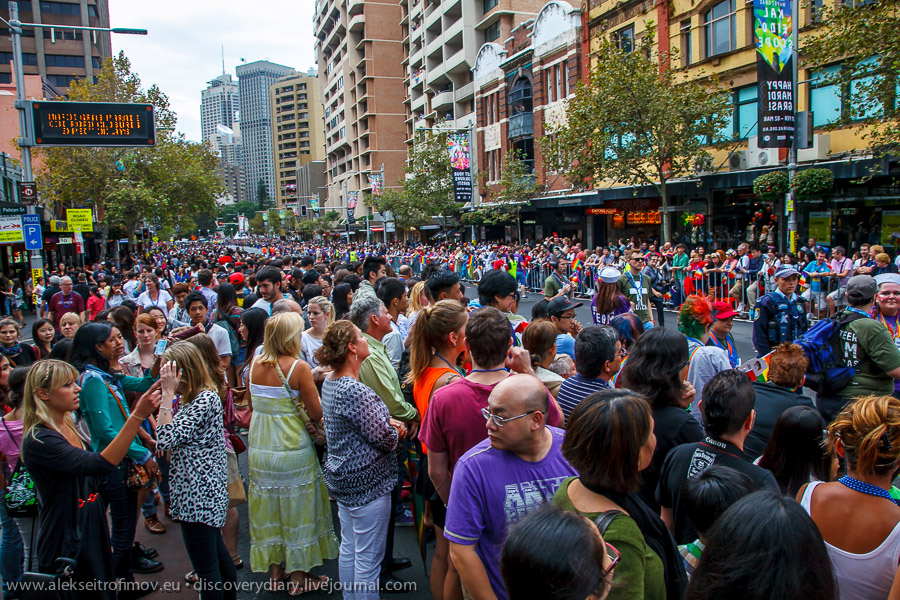 Later there won’t be any free space 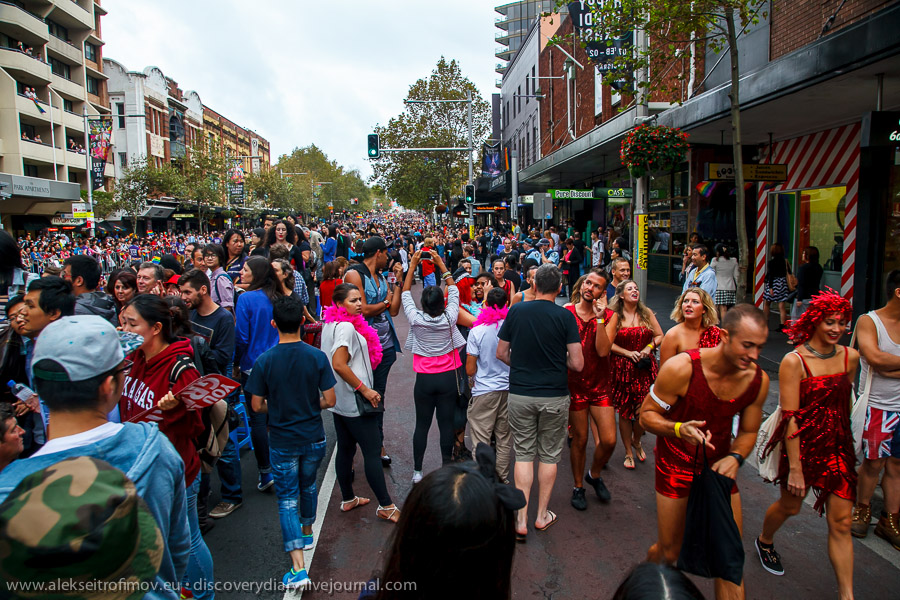 The windows are full of spectators too 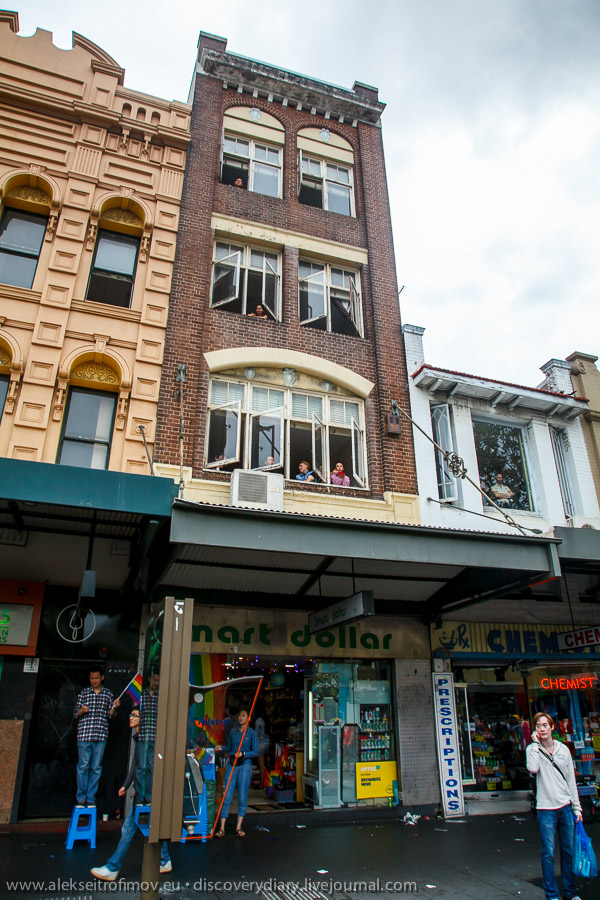 Virtually every establishment on Oxford Street from shops to supermarkets to restaurants to bars demonstrates a rainbow flag of support. People say to each other “Happy Mardi Gras” on the streets. ATMs in Sydney look thus: 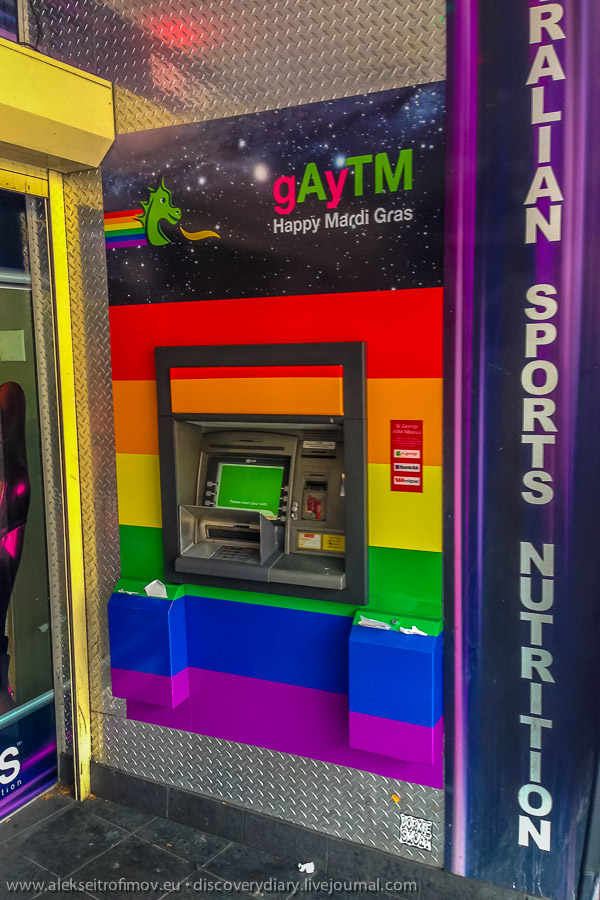 A Coke ad on Kings Cross: 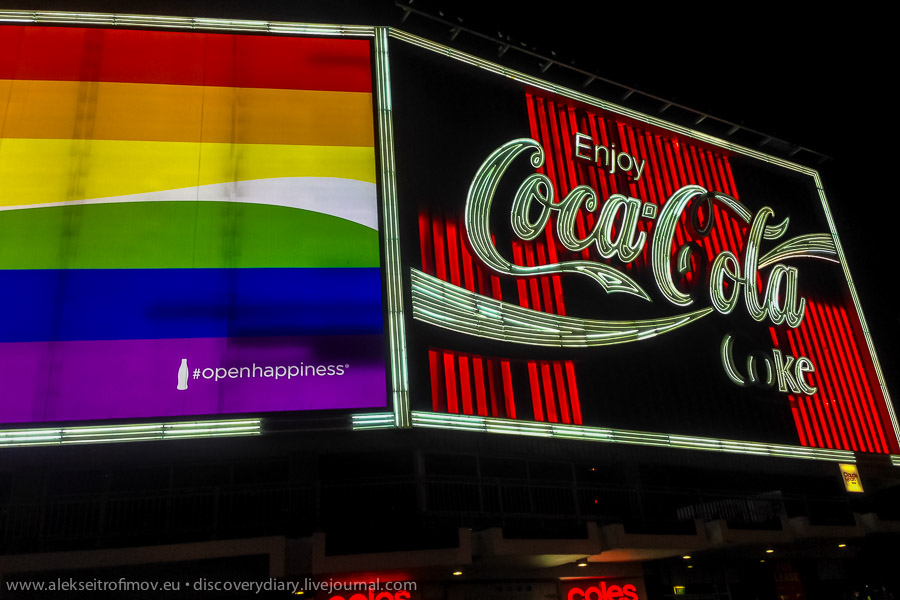 I was too lazy to stand for several hours to secure a place next to the parade, so as I result was moving around and didn’t have a good vintage point. Anyway I am reluctant to create a standard reportage of this pride which would concentrate on various strange looking attires. I think a lot more interesting is the fact how many plain usual people there were. Anyway the Australian newspapers have a lot of photos from the Mardi Gras, for example here.

I am particularly interested in the following two political floats. The first one is called “To Russia with Love”. Dancers dressed in Russian flag colours were accompanying this van with Putin’s face. The point is of course to protest the recent “anti-propaganda” laws marginalising gays and lesbians in Russia. 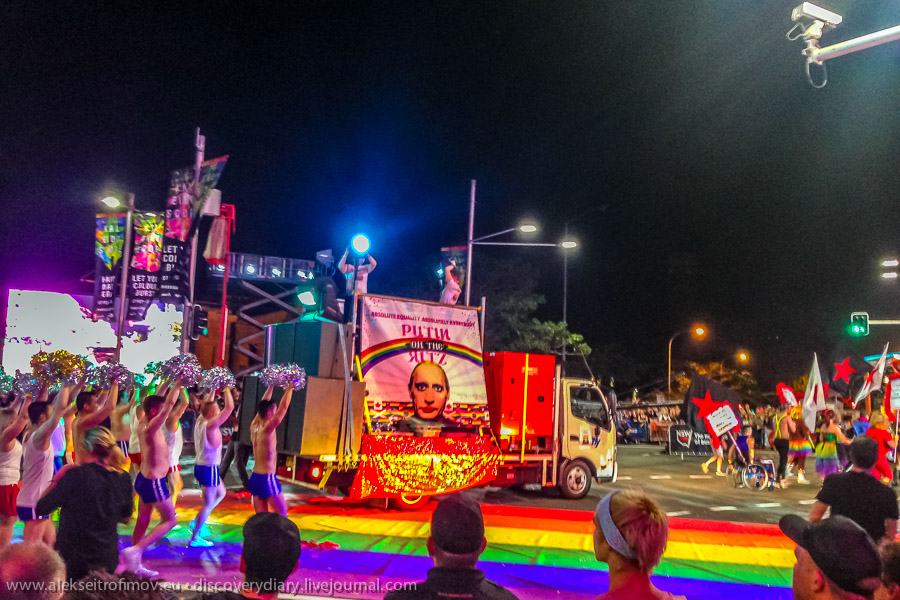 The next delegation organised by Amnesty International represented a giant dark figure with Putin’s features manipulating little people running in front of it. It’s ironic that this figure was created even before the events in Ukraine which were unfolding right at the time of the parade.

It is a favourite pastime of dictators, to choose a small defenceless group and to demonise it in order to distract attention from other more serious issues. This is exactly the scenario that Putin is playing out with gays – although he could have chosen a different group, say the Georgians, or the Jews, or the Gypsies. But I am convinced that this game is extremely shortsighted. Homophobia is the racism of our time. In the sixties many prominent leaders also considered the discrimination of blacks justified. But no one doubts today whether it was KuKluxKlan or Martin Luther King who was on the right side of history. In several decades the homophobe Putin will look just as ridiculous. 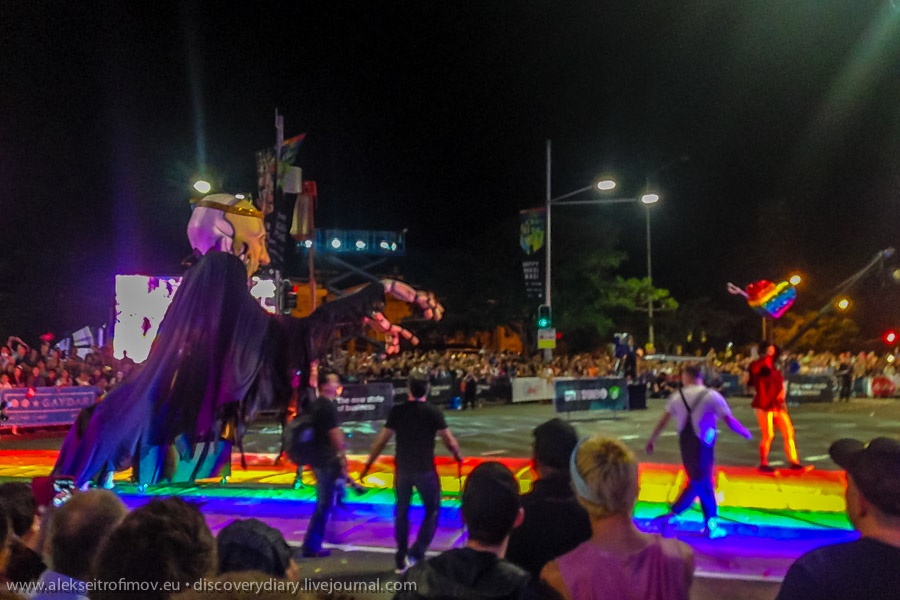