Chile is a very particular place. As I already wrote before, it is a continental island. Geographic isolation, as it always does, has led to the development of various idiosyncratic features, absent in other places. One of them is the history of Chile, which is quite unique, and most importantly very alive, in the sense that the battle of historic antagonists rages on in the political arena to this very day. In this sense the history and politics of Chile is radically different from say that of Argentina, where there is no such burning polarisation.

In 1970 Chile became the first country on Earth where a socialist leader won democratic elections and subsequently assumed power. Dr Salvador Allende only won 34% of the vote, but due to Chilean tradition of the time the winner of the first and only tour of the election was anointed automatically by the parliament. In the context of the Cold War Allende becoming the president of Chile was an insufferable blow to the American interests, as Latin America was seen the immediate sphere of influence for the United States, with the painful exception of Cuba of course. Therefore from the moment of the election the Americans started looking for ways to displace Allende. In 1970 CIA was actively developed a plan of an immediate military coup, which however failed. For the following three years Allende systematically kept nationalising major companies, mostly owned by the Americans. The Americans on the other hand did everything to deteriorate the economic situation in Chile, including an economic blockade. By 1973 the economy was in tatters, fuel, bread and milk were in deficit. Population was unhappy and blamed Allende’s government.

Finally on 11 September 1973 an event took place that would shape the Chilean history forever. In Chile this date is repeated over and over, it is repeated on street signs and museums have whole rooms devoted to it. On that faithful day the four military commanders organised a military coup. Armed forces surrounded La Moneda, the presidential palace, and at a certain point the bombarding of the palace started from air and from tanks and snipers. President Allende asked all the personnel to leave, and surrounded by his closest comrades who chose to remain he gave his famous final speech on the radio. Right before the soldiers entered the palace he (probably) shot himself from a rifle. The putsch was headed by General Augusto Pinochet.

(The restored) La Moneda palace. The buildings around it however bear the traces of bullets to this day. 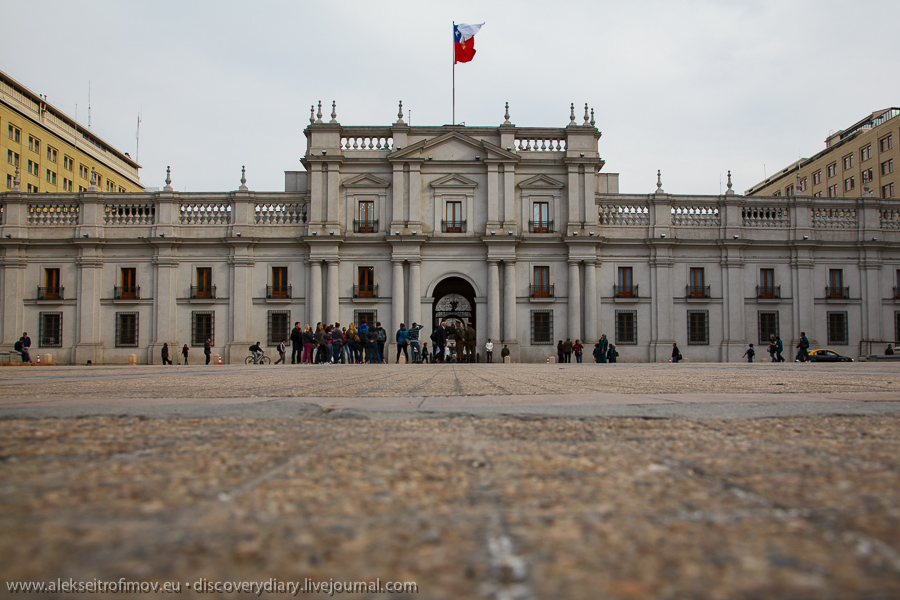 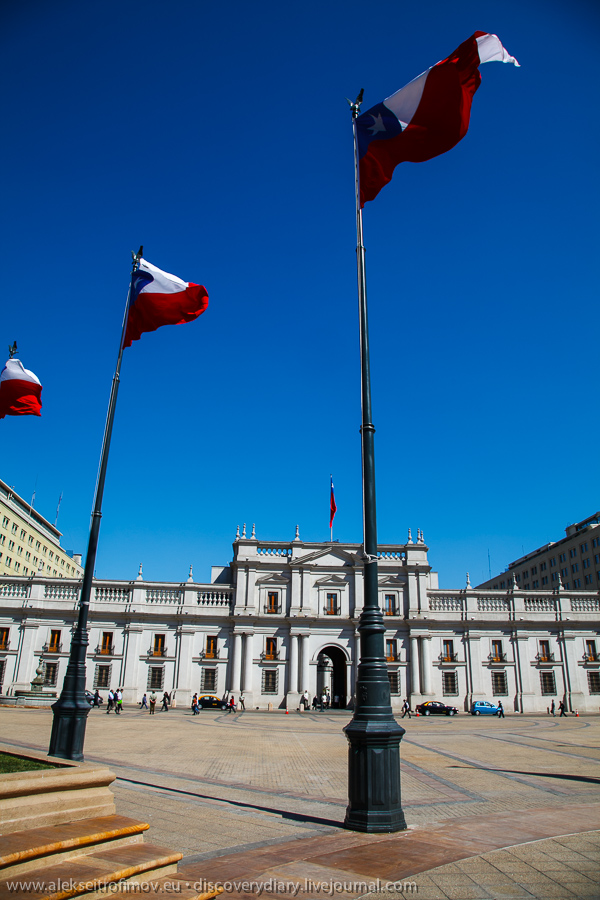 A statue of Salvador Allende dominates today the square in front of the La Moneda palace. The statue bears the last words of his tragic speech on the radio that day: “I believe in Chile and in its destiny”. 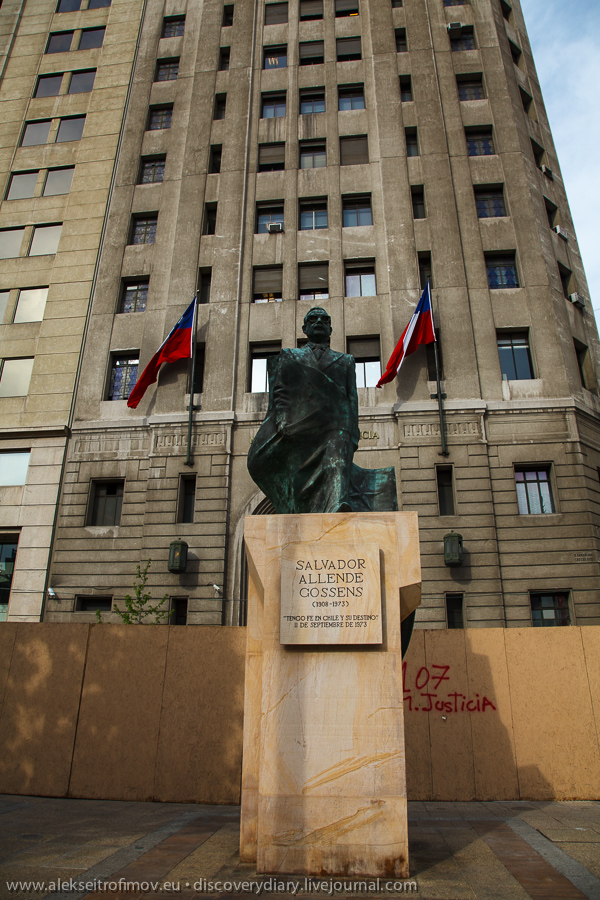 Salvador Allende’s glasses, found a couple of days later in the ruins of the palace by his follower who got there accidentally. 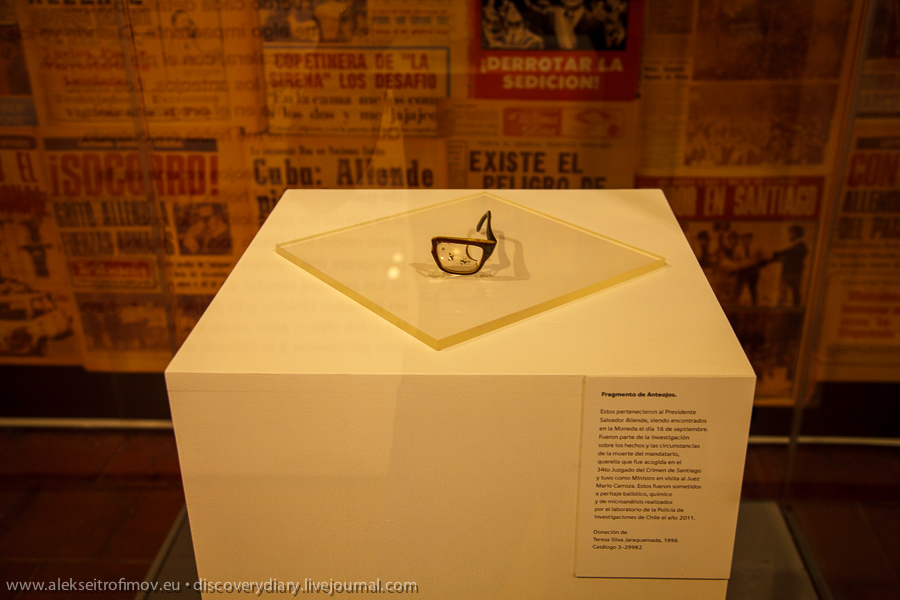 The Chilean history changed entirely from that day. The regime immediately broke all relations with Allende’s socialist and communist friends and veered sharply to the right. The regime’s opponents were arrested, held in concentration camps, tortured, many were executed or “disappeared”. Traces of some of these persons cannot be found until now. Campfires of books were burning all around the country, all the book presses were destroyed – ­until now Chile imports all its books. A curfew was installed and for many years nobody was allowed to be on the street after 9 in the evening. All areas of life were under the control of the military or the special service DINA, answering directly to Pinochet. Outside of the country DINA organised a number of high profile murders of important opponents in Washington, Buenos Aires and Rome. Pinochet was staunchly supported by USA and became a target of the Soviet propaganda.

The economic situation on the other hand radically improved – ­with a strong support and subsidies of the United States the economy flourished, Chile became the richest country in Latin America, a textbook example of the successes of liberalisation and free market. The wealth though, as is always the case in such economies, was highly concentrated in the hands of a small number of very rich.

An agitational song of his opponents which is called “No, I don’t like him”. I downloaded it to my iPod and listen to it from time to time 😉

The constitution written by Pinochet remained in force however. According to that constitution he held the right to return to his previous occupation, and so he kept on as the commander in chief of the armed forces. Even though a new President and government were elected, his influence remained decisive. In 1998 he changed from commander in chief to senator for life.

Chile remained extremely polarised all this time. On the one side are broadly the followers of Allende, the working class, the poor, the students, the intelligentsia, the artists. On the other side are those linked directly to the regime, such as the armed forces, as well as those who stroke it rich during that time, the economic elites.

Pinochet never went on trial, although in the last years of his life the courts went so far as to declare his immunity void. All we can do to punish his crime is talk about them. He died in 2006. Just like in the case of the recent death of his best friend Margaret Thatcher, his opponents did not hide their celebrations. People were dancing on Alameda, the main street of Santiago. On the other hand around the military hospital where his body laid his supporters demonstrated their grief. On the day of his funeral a son of Allende’s assassinated foreign minister spat on his coffin and was immediately beaten by his supporters.

In 2006 the president of Chile was Michelle Bachelet. Bachelet is a Social Democrat whose father was an important player in Allende’s administration and after the coup was arrested by Pinochet, tortured and died in prison. She refused to attend Pinochet’s funeral on the grounds of conscience. The funeral was not given a state status, rather it was a military funeral.

In Chile the president cannot be elected twice in a row. Therefore in 2010 Bachelet left the office. However in November this year a new election will be held where she can take part and she leads in all polls. In Santiago currently it is the peak of the presidential campaign. Booths like this grace all main streets. This is Michelle: 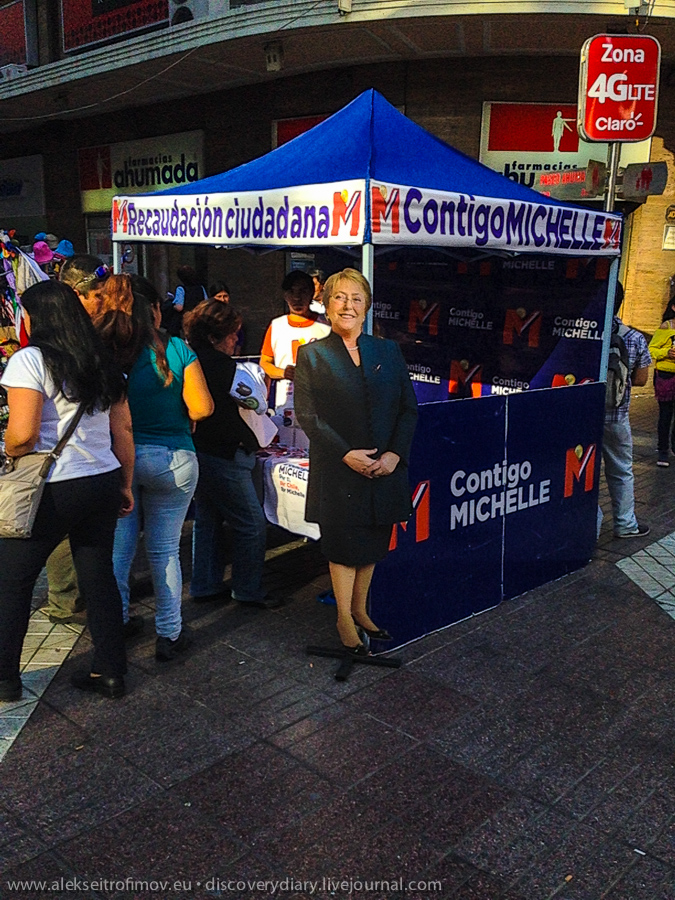 The main museum about the military dictatorship is called the Museum of the Memory. This museum was create during the first presidency of Michelle Bachelet. Its very first room presents all the Truth and Reconciliation Commissions created all around the world to deal with the aftermaths of recent tragedies. There have been quite many such commissions, I counted as many as 38, which is sad of course as it illustrates the number of deadly conflicts. Automatically I started looking for an Estonian commission. But then it hit me that Estonia never had such a commission. We have the White Book, which lists the losses of the Estonian people from various occupations. But there has never been an attempt at reconciliation. In the Estonian national narrative there are no legitimate viewpoints to be reconciled. There is only one side, which is entitled to all the truth.

I spent a whole day in this museum, exploring various materials about the coup, the dictatorship, the miraculously won referendum of 1988 and the transition to democracy. The most shocking impression were the lists of various methods of torture which the regime used against the political detainees. I will not retell it, suffice it to say that the incredible fantasy of the torturers made me sick.

Photography is prohibited there, I only made a picture of this abstract installation on the idea of memory. 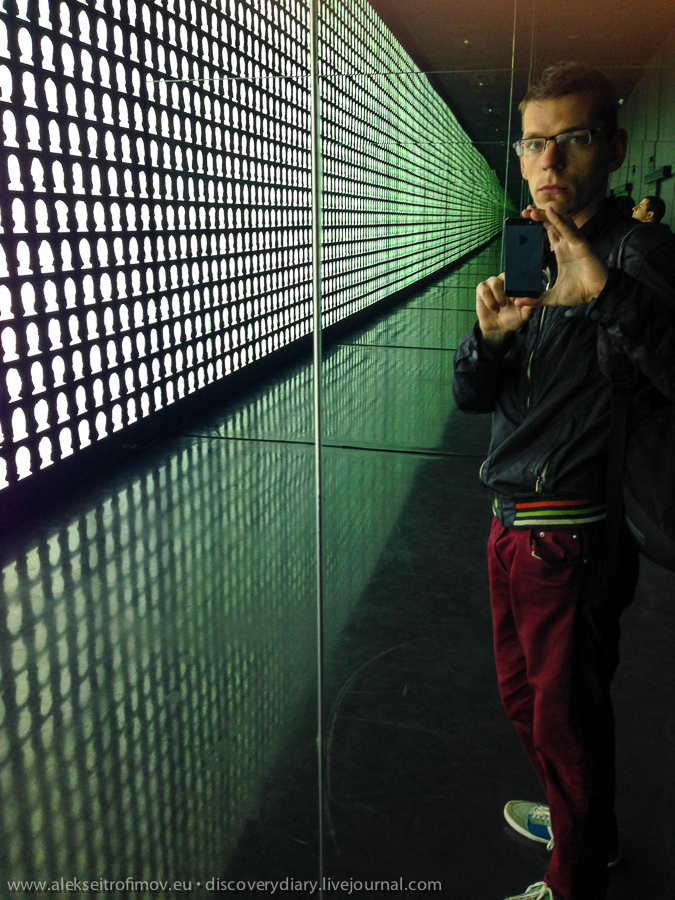 In the centre of Santiago there is another museum called Londres 38. Londres 38 is an address. It is the house where one of the secret services bases was located and where the political opponents were held. They were brought there at night, with their eyes tied, in closed cars which would circle Santiago for hours to make sure they lost all sense of orientation and had no idea where they are taken. This practice immediately reminded me of Khmer Rouge methods. They also circled for ages before taking prisoners to the Killing Fields. In Londres 38 there is no particular exhibition, you simply visit the rooms where the prisoners were held and tortured. 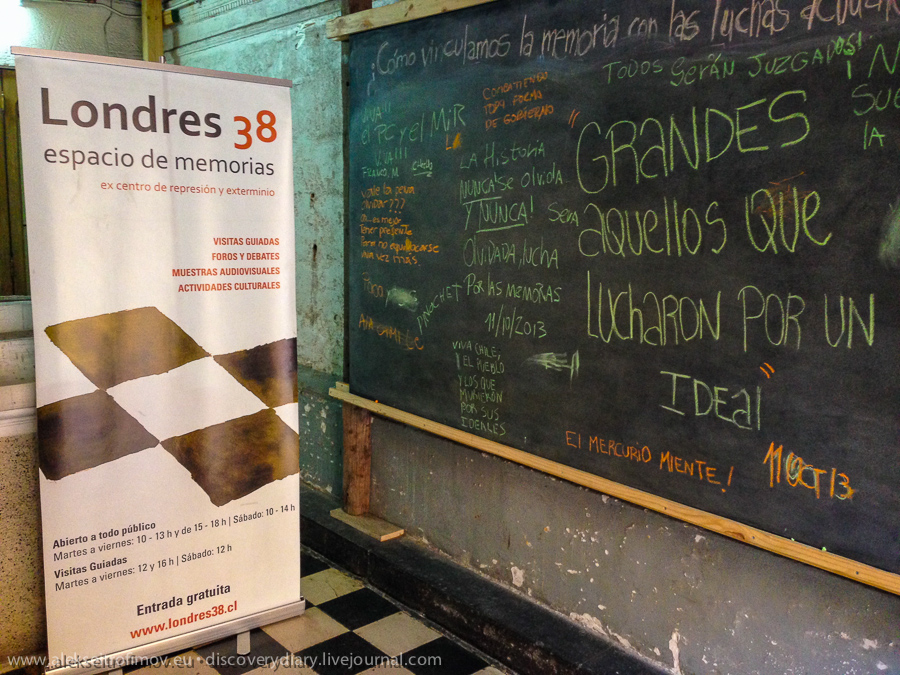 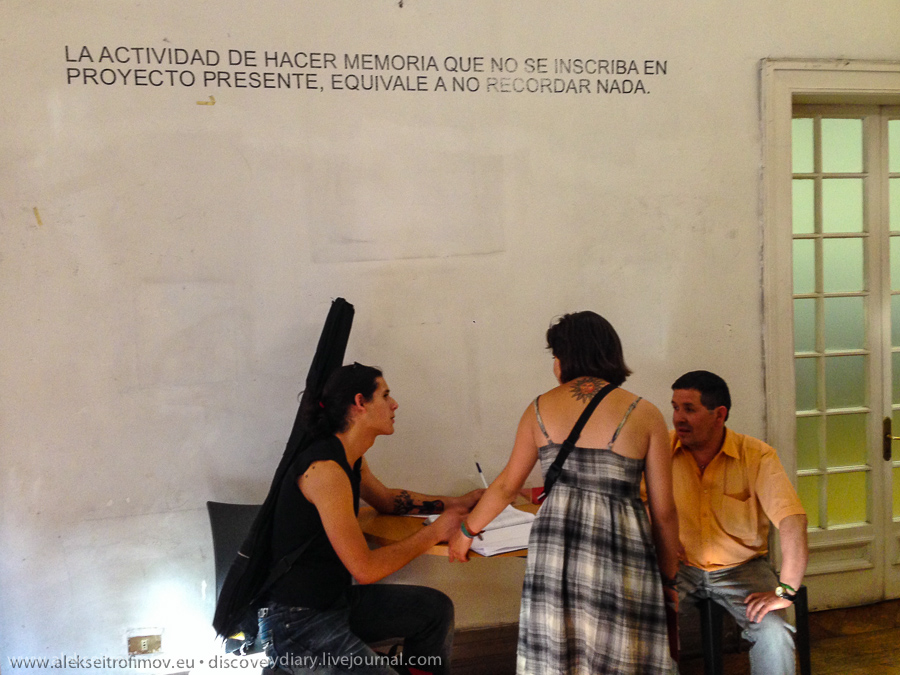 An excerpt from a letter written by one of the prisoners to another. The author disappeared. “I remember how we met in the house of horror. In those moments a ray of light seemed like a dream.” 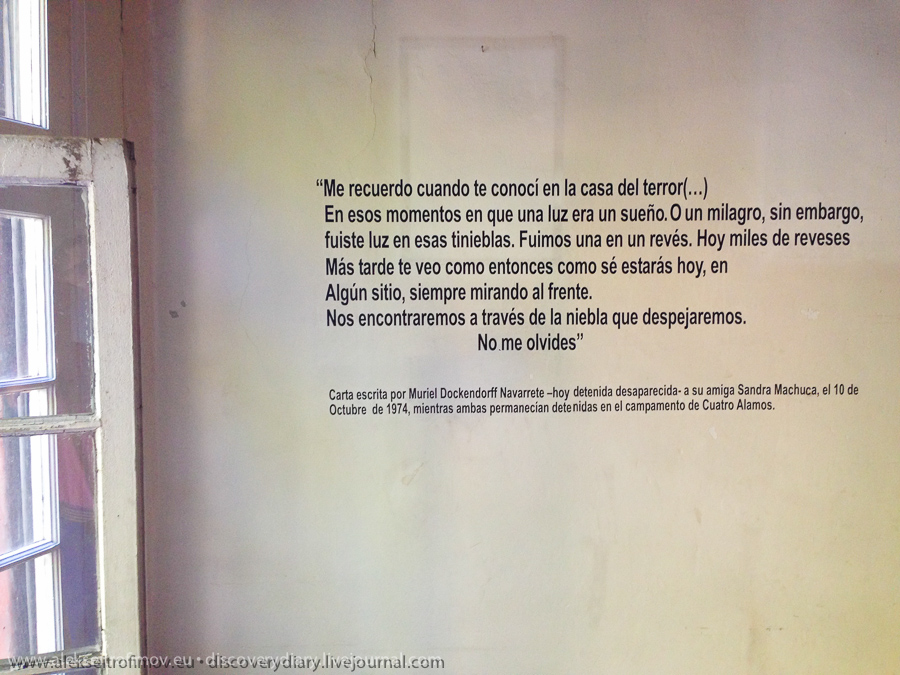 “The people who arrested, interrogated, tortured, guarded and executed were in their absolute majority personnel of the armed forces and the forces of the order. Their everyday job, for which they received a salary from the state and for which some of them keep receiving pension, was to detain, to interrogate, to torture and finally to “disappear” or to execute thousands of persons. Only some of them went on trial and were condemned. Many remain in active service.” 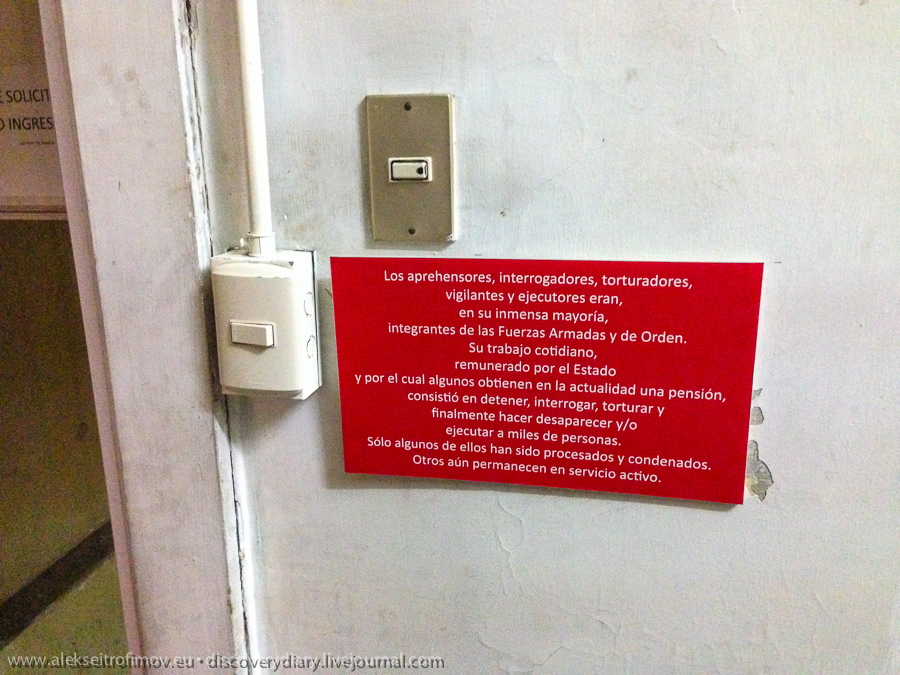 Near the entrance to Londres 38 commemorative plates are included in the pavement, which look much like the plates reminding about the killed Jews in European cities. 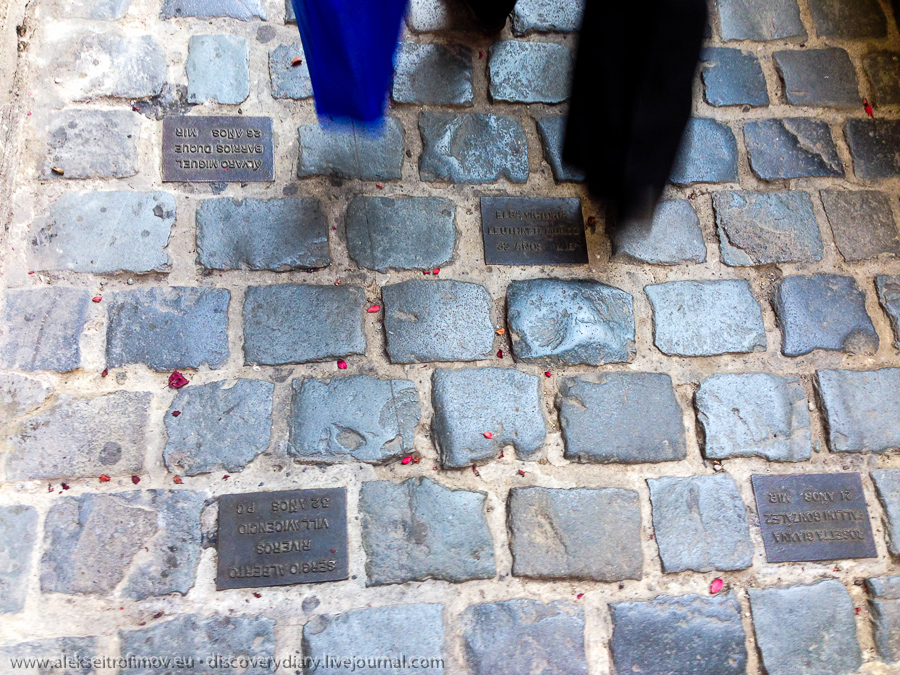 One of the rooms in Londres 38 featured a photography exhibition about recent student demonstrations. In Chile the education system is American style in the sense that the higher education is paid and only the children of the rich can actually afford it, the rest of the population has to take up immense loans and then pay them back forever. Students were protesting this system and more generally the social injustices in Chile.

During my stay in Santiago I became friends with a number of students who took part in these protests. You can imagine where my sympathies lie. 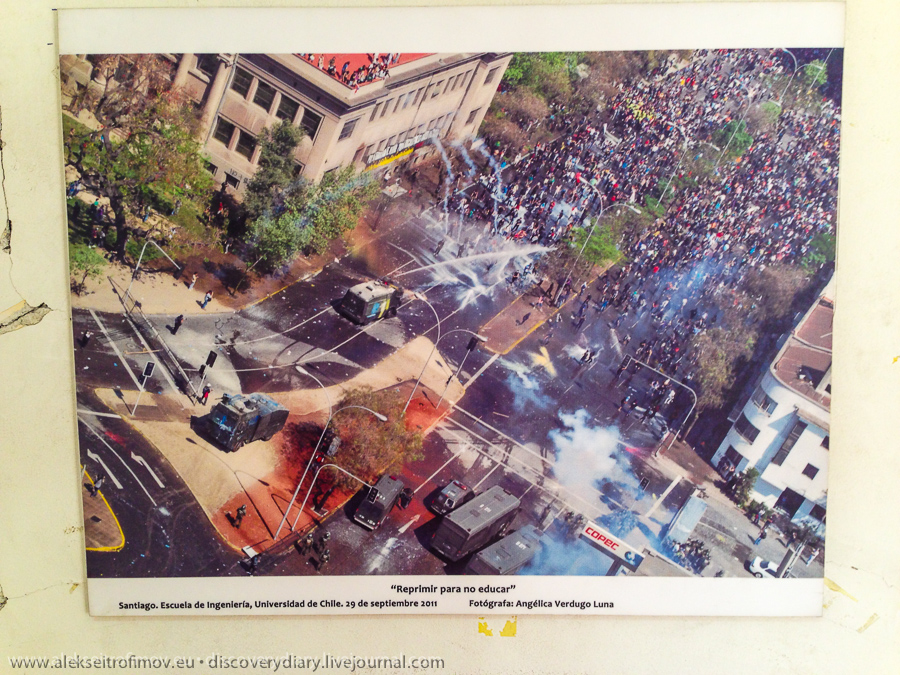 A granny supports the students: “Free education for our young.” 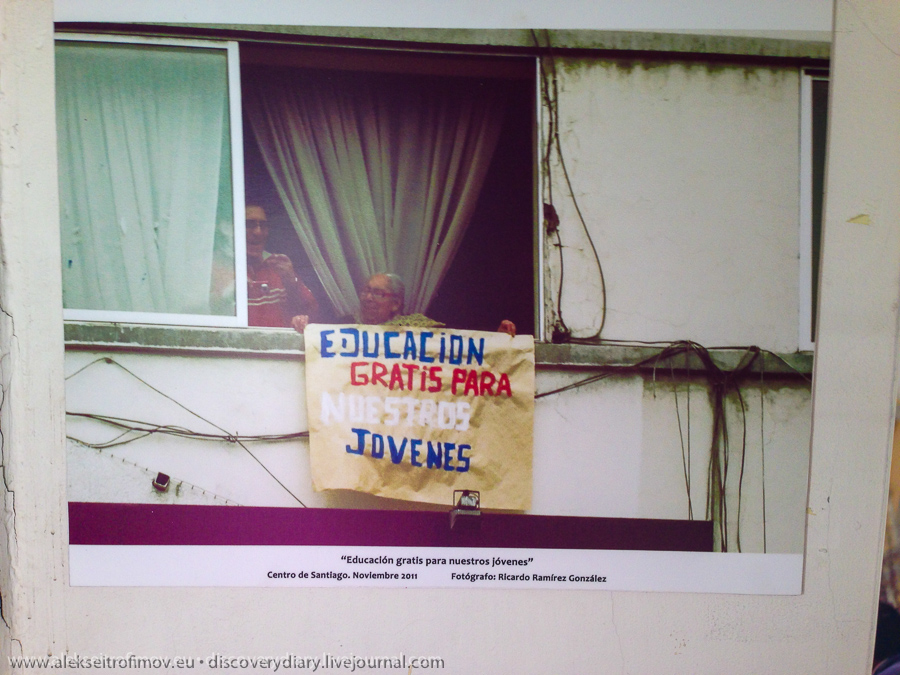 A (very) approximate translation of these posters ridiculing the politicians: “I don’t care about you” 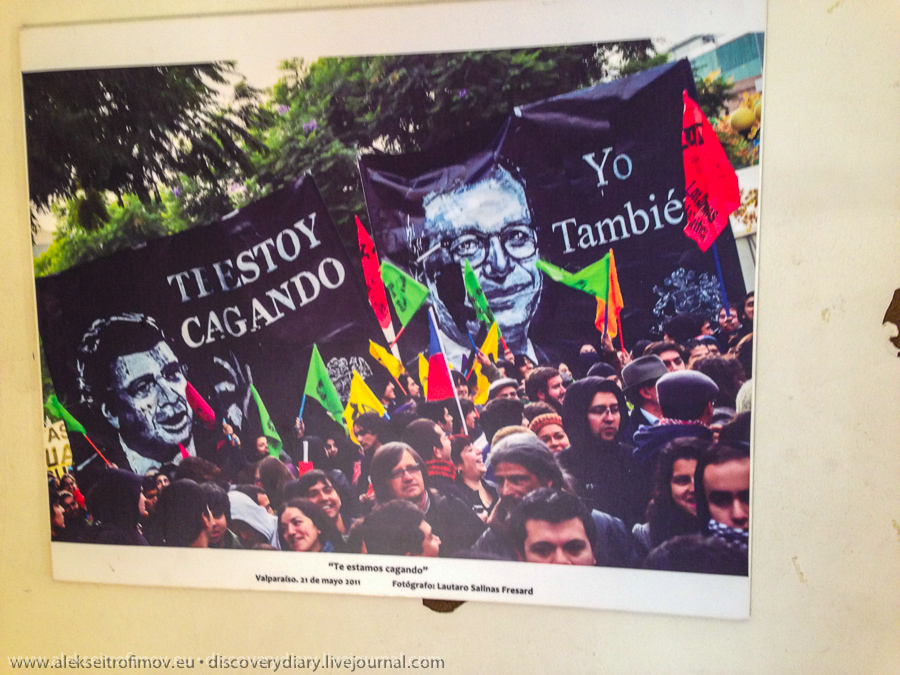 “An ignorant people is a slave people” 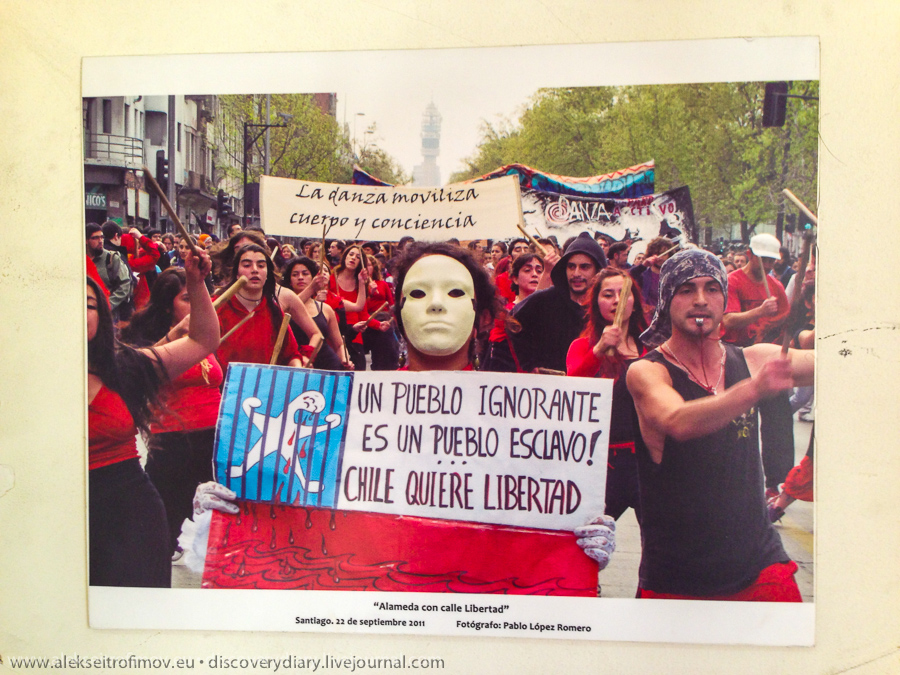 This is the building of the main university. During student demonstrations the students barricade inside the building and all university activity ceases. The poster says: “Our battle is of the whole society. All for free education!” 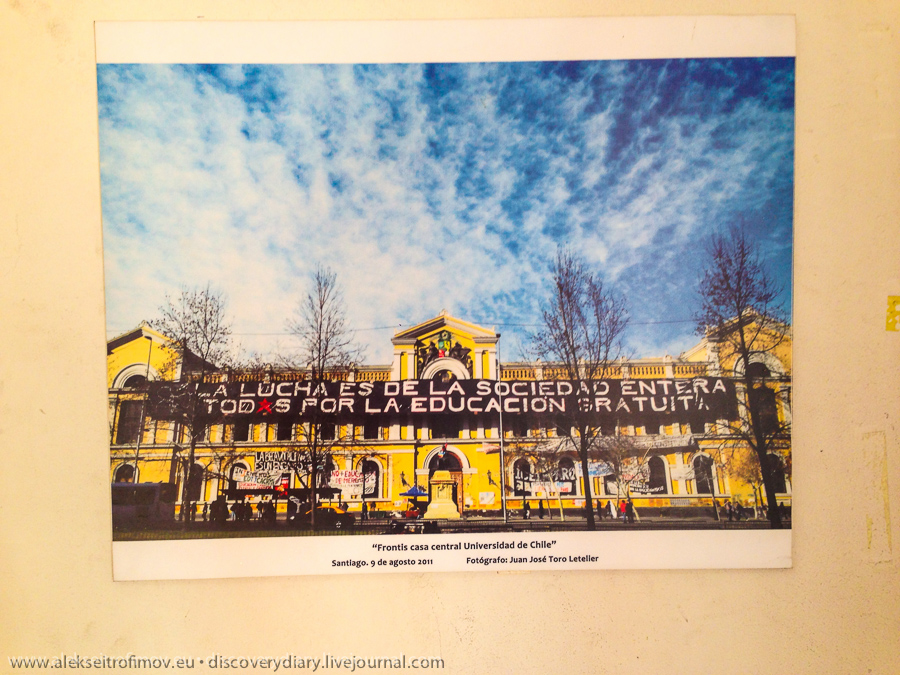