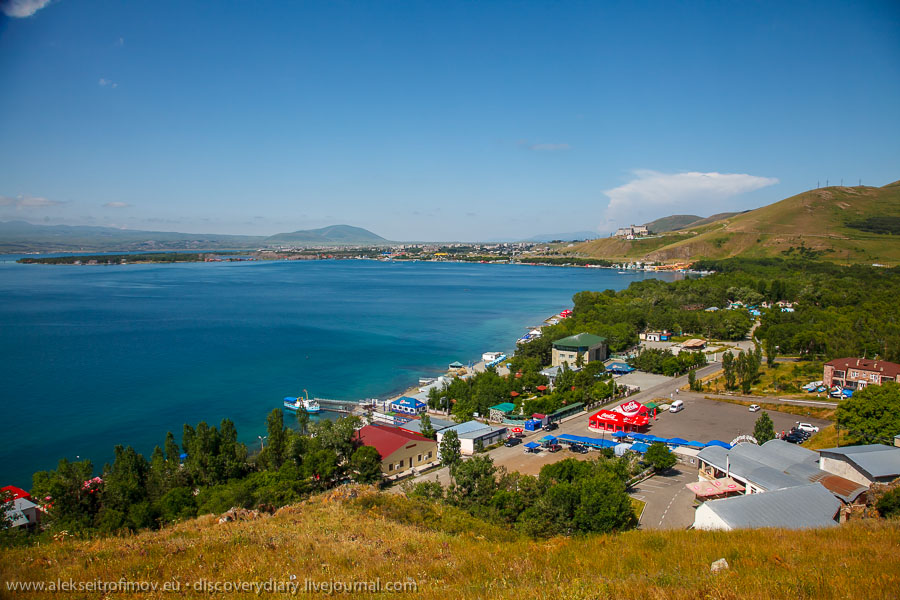 The Lake is filled by a large tunnel which is 50km long. According to an urban legend, Khruschev was visiting the Armenian party bosses. The Armenians gave a huge party on the shores of Sevan. As he got more and more drunk from the generous treats, finally he asked the hosts how he could help Armenia. Immediately a pre-prepared order was placed in front of him and he signed it without reading. The order was to build this tunnel. He had to regret signing it later as it required immense resources. 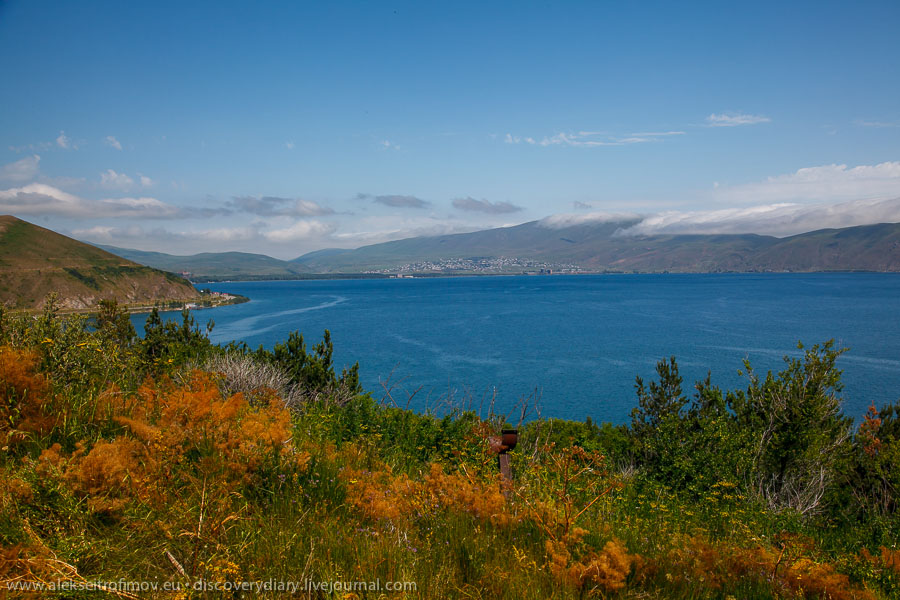 Sevanavank is a monastery in the South-East of Lake Sevan. It was founded in 8th century and is situated on a peninsula, which used to be an island once. It is the location the Sevan battle in 921. One day the king of Armenia Ashot the Iron was surrounded by the Arab invaders and agreed to surrender. The surrender was to take place on the next morning. However the king took to the sails early in the morning, attacked the sleeping army and defeated it despite the huge disadvantage in the number of troops. As a result of this momentous battle Armenia preserved its independence and eventually Ashot came to dominate the Caucasus. 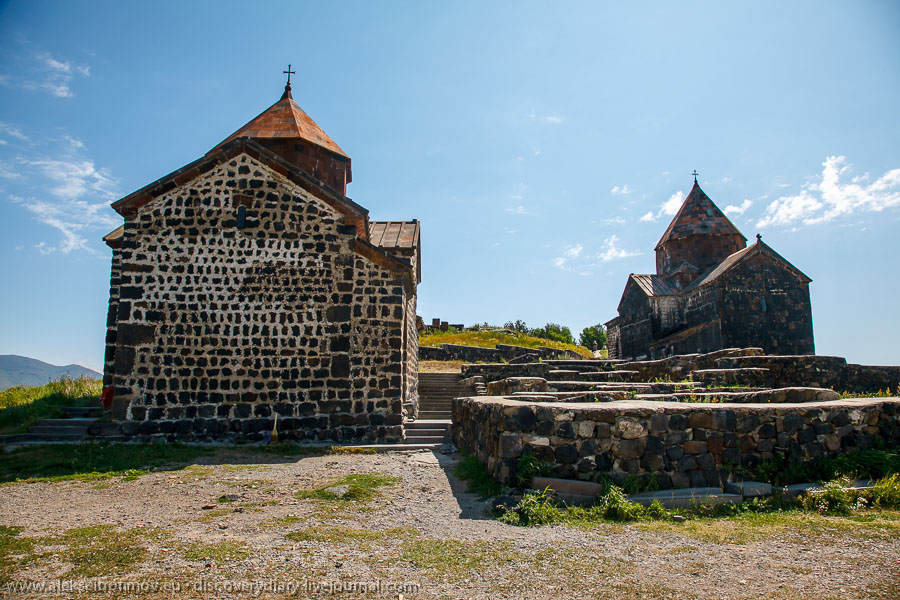 The main church of the monastery is shaped as a cross, which is a classic shape of Armenian churches. The church is facing the East, considered to be the most sacred of directions. The Church of Armenia is independent vis-à-vis all other Christian churches, in Armenian dogma Jesus only has divine nature (this is the key point where most churches differ). Armenian make the sign of the cross with the thumb and the ring finger. They do not venerate icons. The churches here are very simple, as our guide said, the simpler the church, the closer it is to God. A curtain in a church signifies that it is a functioning church. 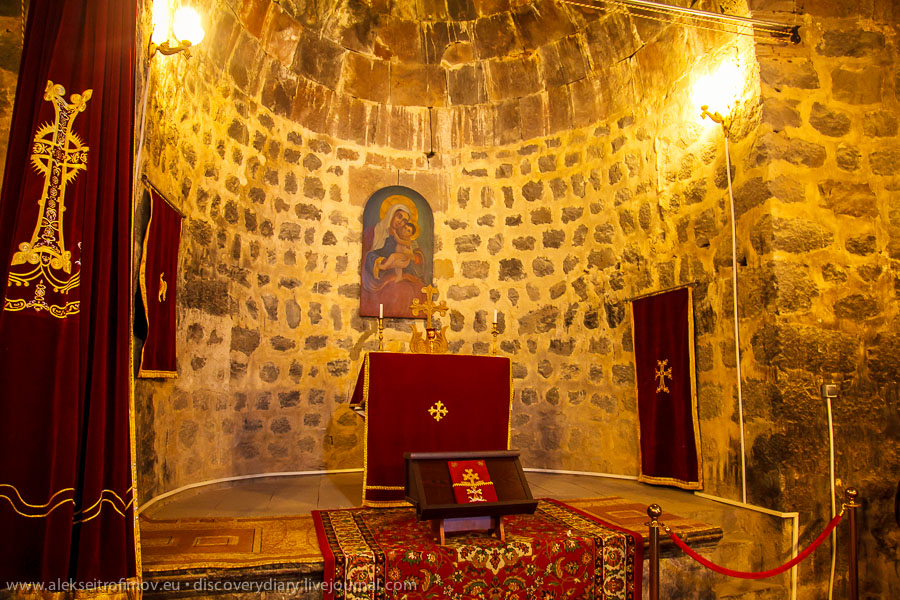 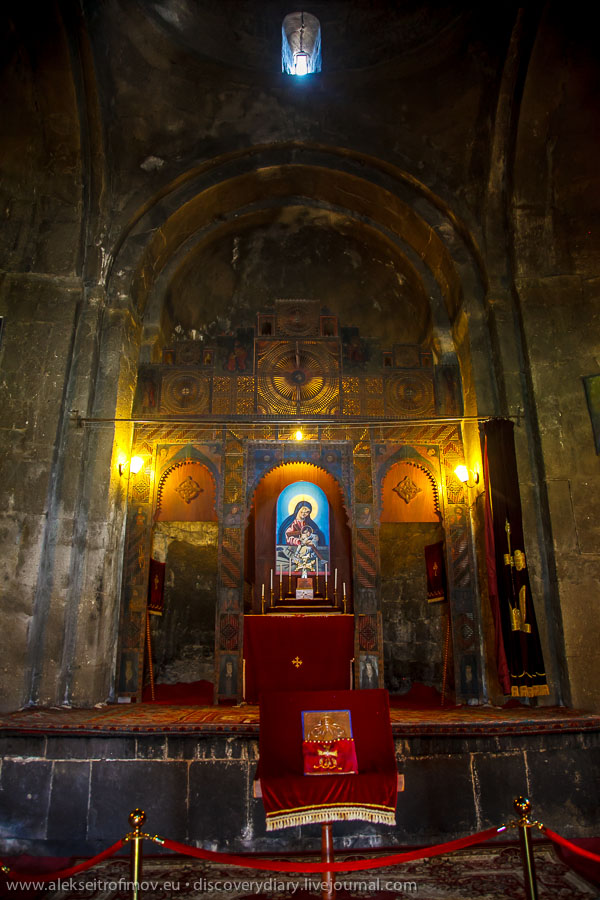 Another monastery by the lake – on its Western shore. Hayravank dates from 9th century. 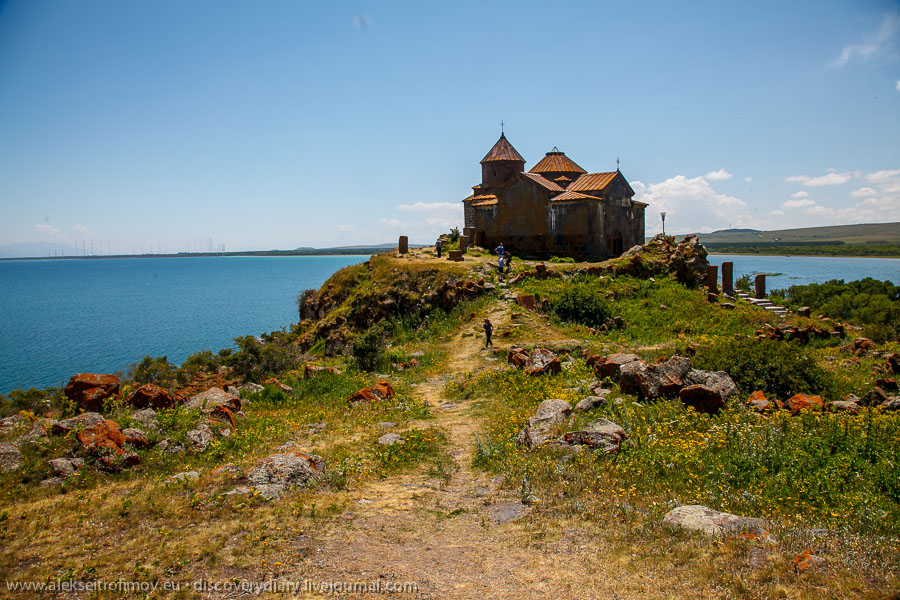 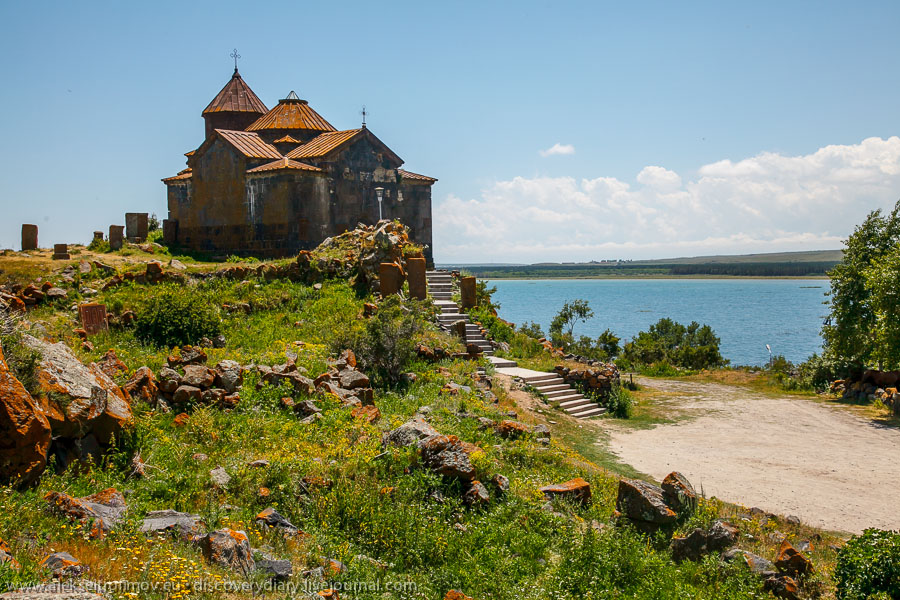 A cemetery in the village of Noratuz is famous for possessing the largest collection of khachkars in all of Armenia. Khachkars are stone stelae which often serve as funerary monuments. The tradition is extremely ancient, its roots go down into the Urartian times. There are several thousand khachkars in Armenia. As a rule a cross is drawn in the centre of the plate, surrounded by various other elements. Every plate is unique. 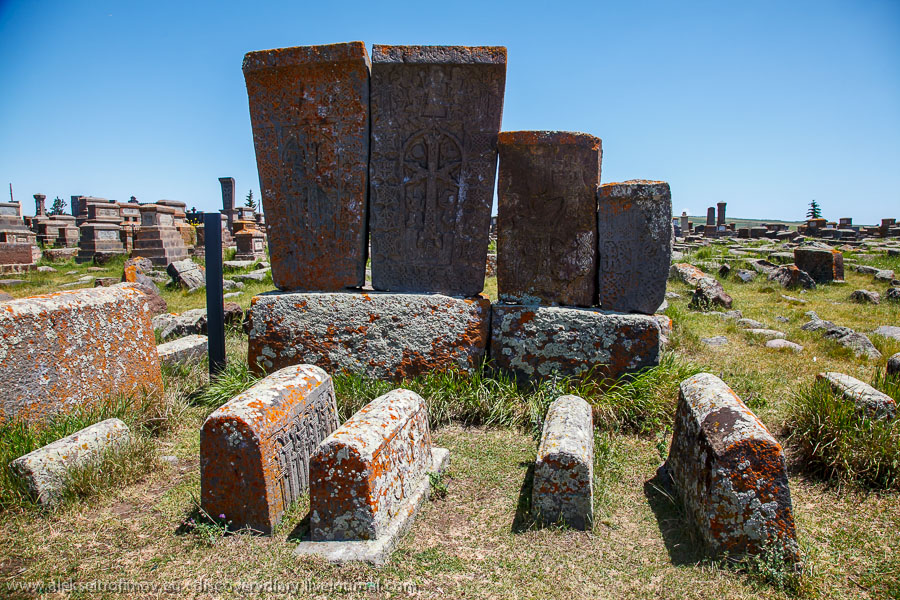 The Noratuz cemetery. One of the most notable funerary plates is this one, telling the tale of the Mongol invasion into Armenia. The very moment of the invasion coincided with a wedding, and a horseman on the left of the plate is just such un unwanted guest at a wedding celebration. The person buried is one of the newly weds. 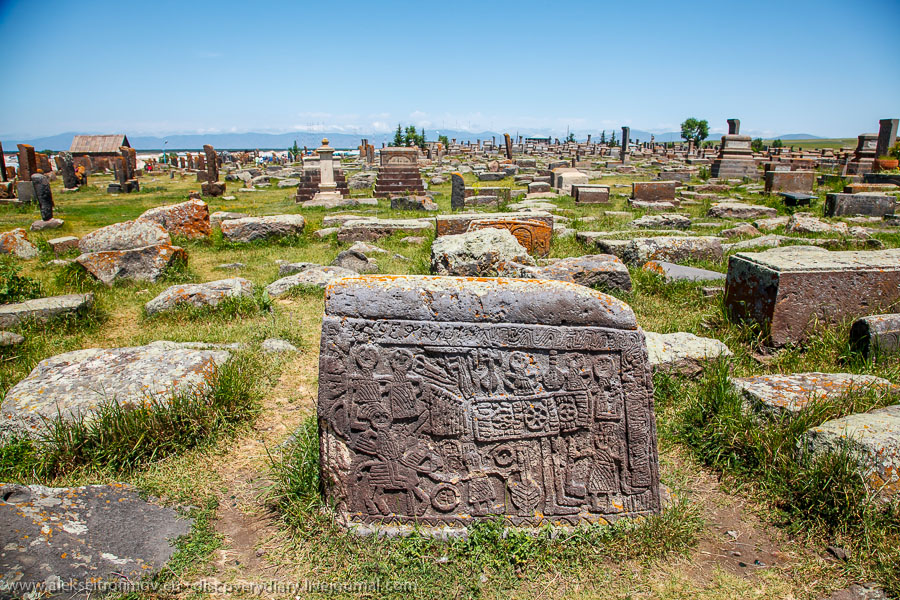 The Armenians believe that when Jesus returns, it will be from the West. For this reason all the khackhars face West. The body is oriented in such a way that its feet meet the face of the khackhar. 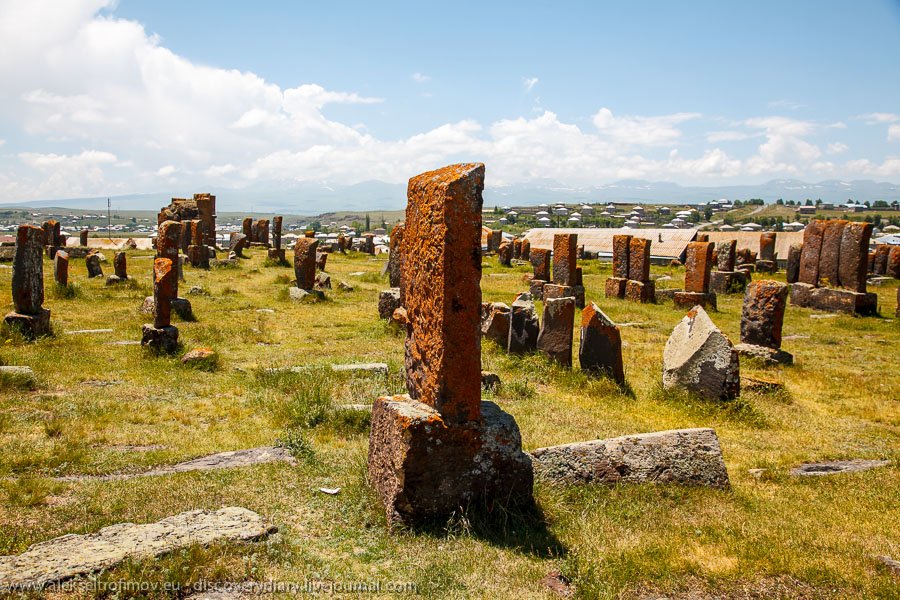 The Geghard Monastery, perhaps the most important tourist attraction in Armenia outside of Yerevan. “Geghard” means “spear” – and the reason for such a name is the fact that for many centuries the monastery was the sanctuary where the relic of the spear was held. It is believed to be the very spear used by the Roman centurion Longin to pierce the body of Jesus on the cross. Nowadays the spear is preserved in the Etchmiadzin cathedral – as I described here. This is the main church of the complex. The monastery is part hidden within the caves of the hill. 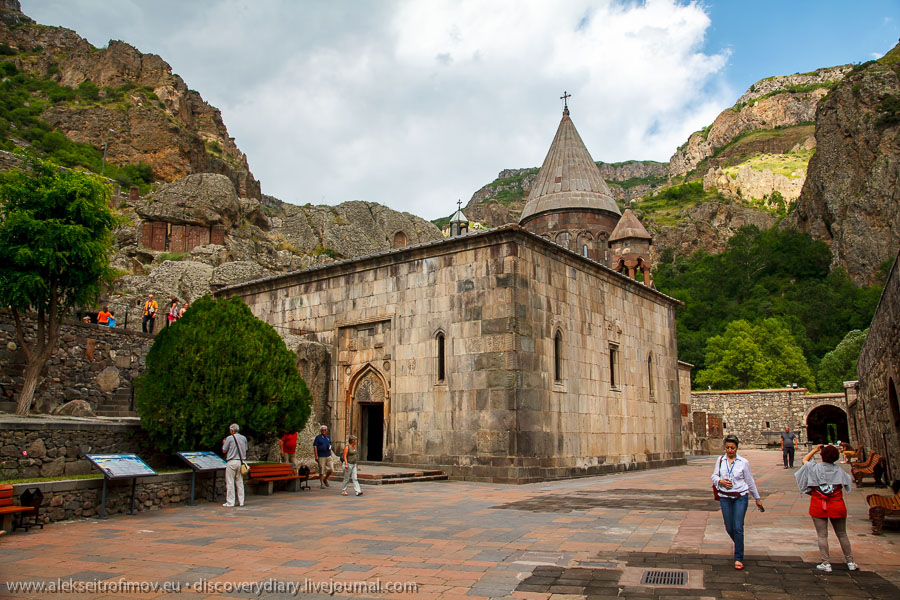 Inside the main temple. 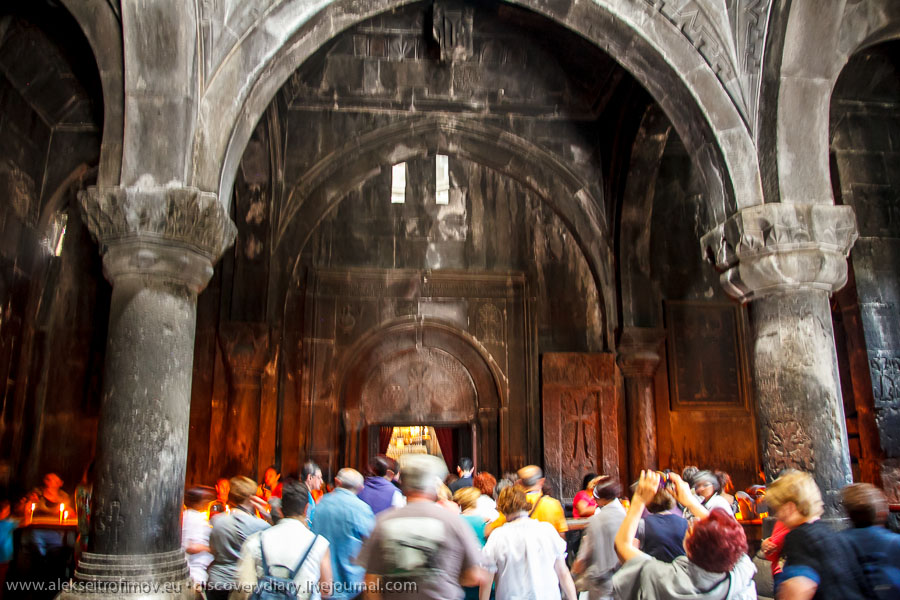 The altar in the main church, behind the doors you see on the previous photo. 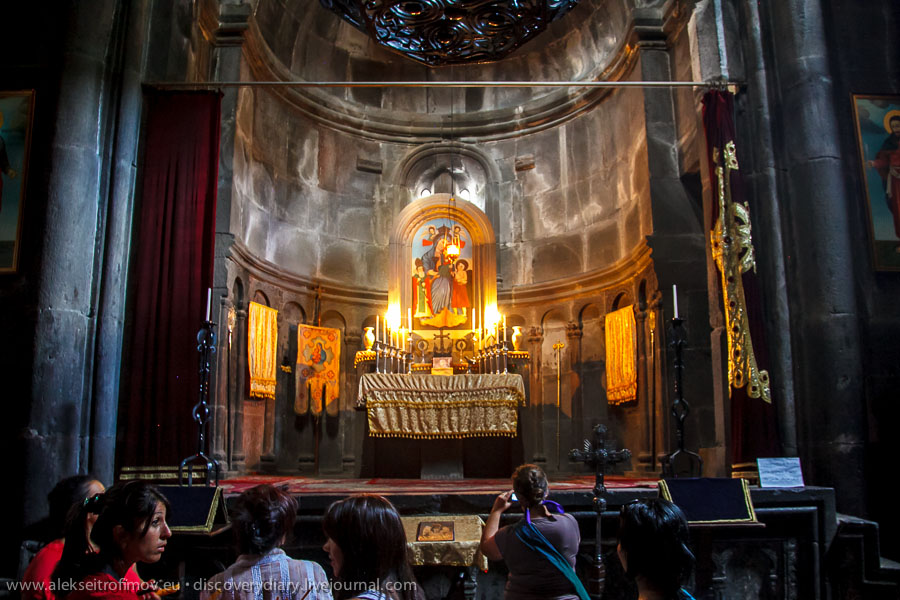 I thought these lions on a wall looked particularly mysterious. 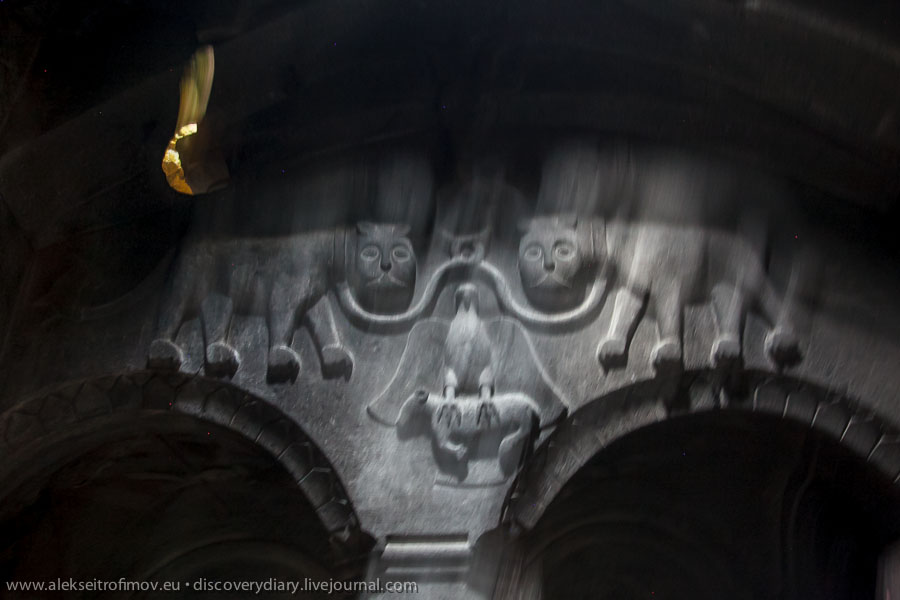 An entrance to a chapel inside the hill on top of the main church. You can see a row of khachkars above the entrance. 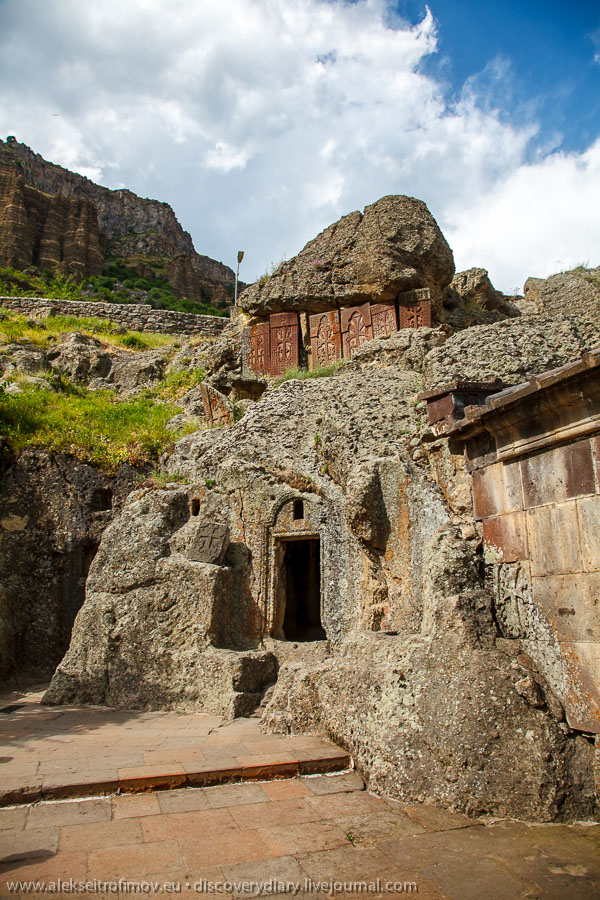 Inside the chapel. It is called Jamatun Papak. When we visited, spontaneously a group of singers entered and started singing local folk songs a capella. The chapel is particularly famous for the unique acoustics. 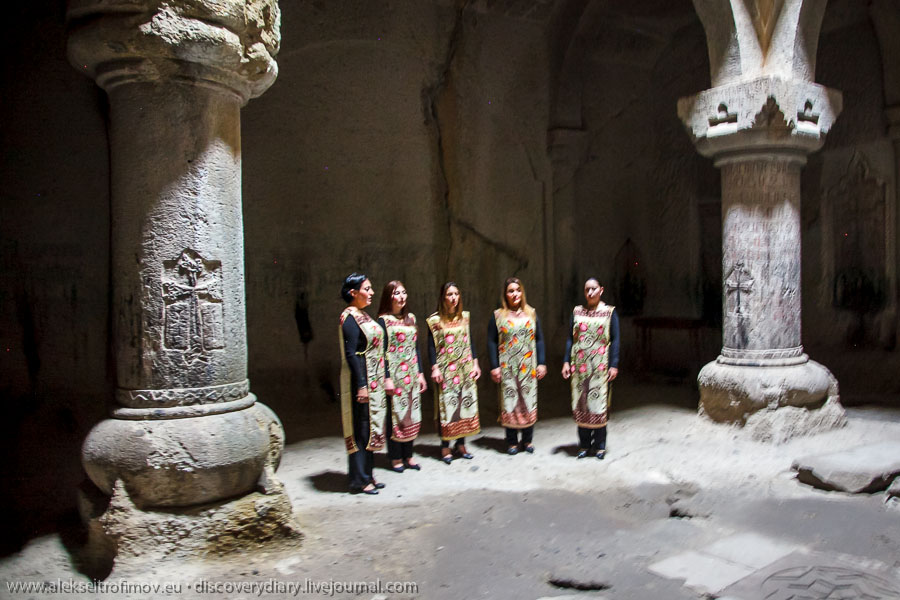 An opening in the ceiling lets in the light. 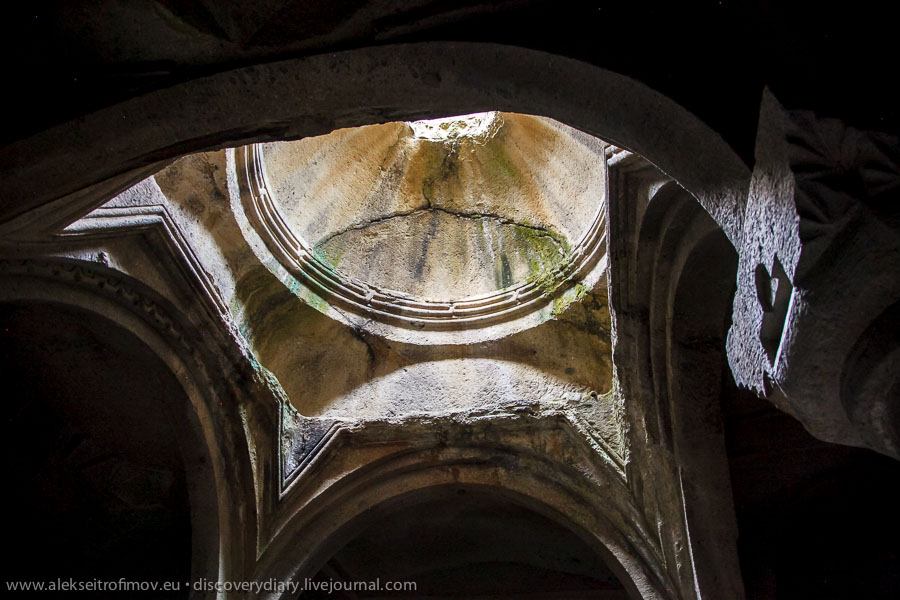 In the corner of the chapel I noticed an opening that opens to a room below. It is the very orifice that you can see on a photo with the mysterious lions above. The guide explained to me that in the old days the sounds of the singing in the chapel reached the lower space where the tombs of the Proshyan dynasty are located. It was believed that this way the dead kings would enjoy the songs. 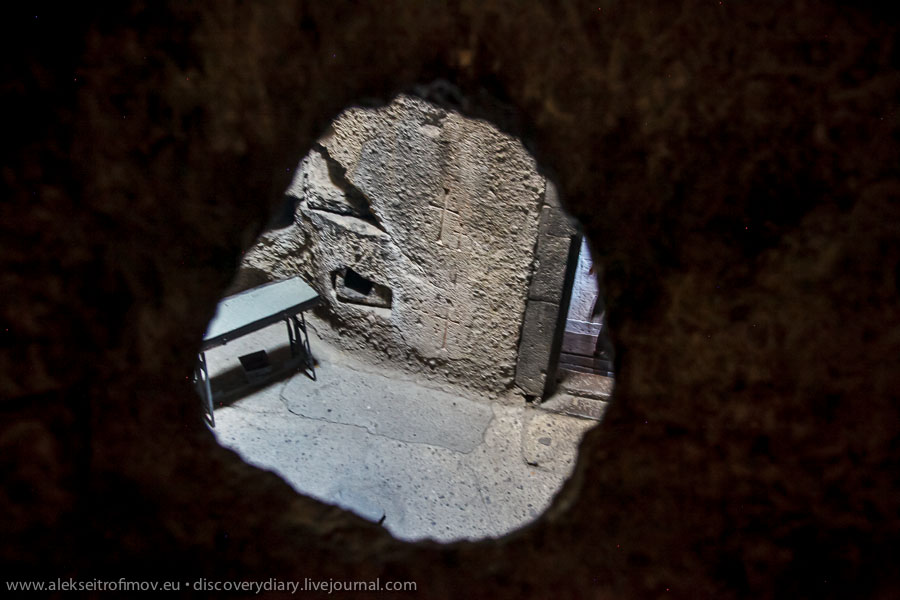 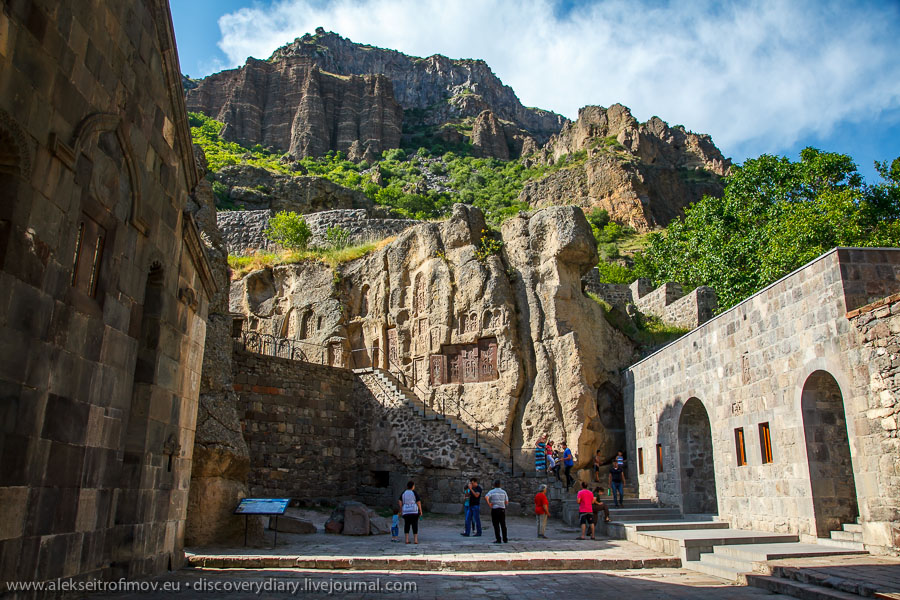 In one of the caves we saw this opening in the floor. It is in fact an oven, used to bake lavash – the Armenian bread. The dough is thinly spread over the oven walls and the heat makes it into bread in an instant. 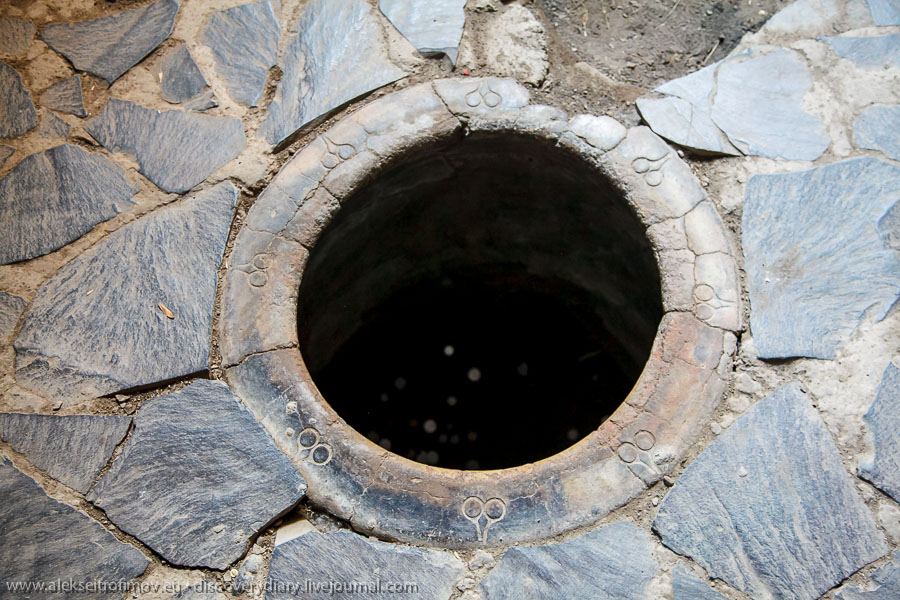 Looking at the church from the entrance of the previous cave. 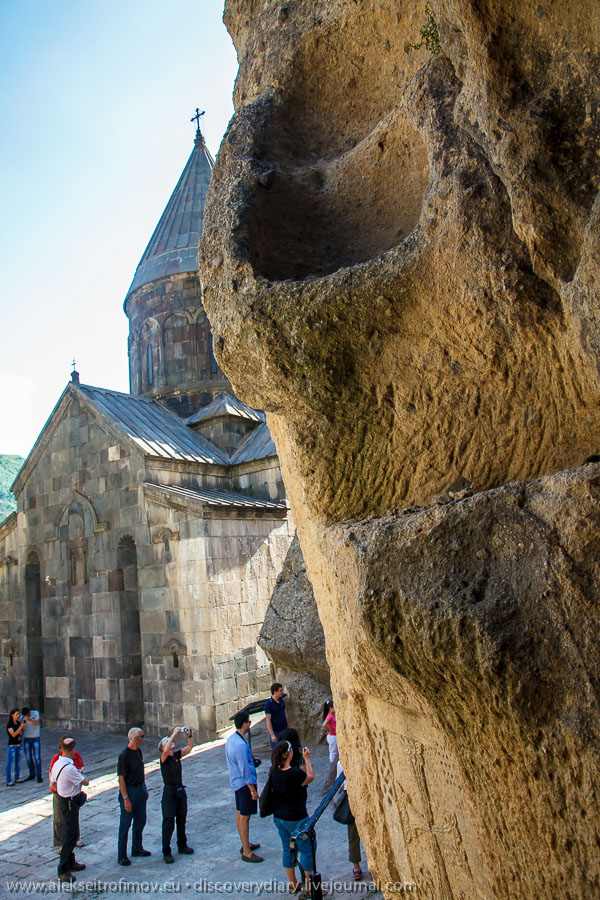 These huge sweet cakes are sold in many places in Geghard. We had to buy one. 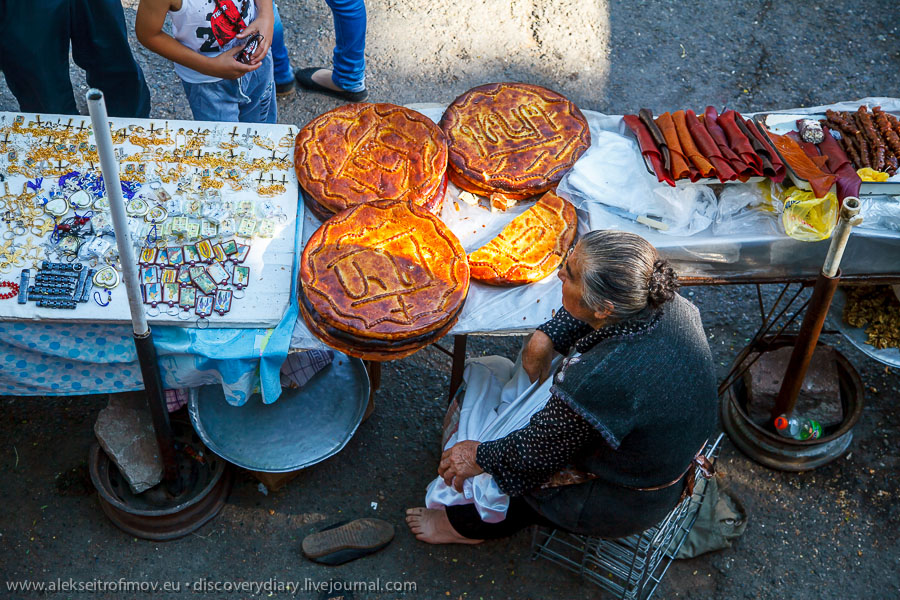 Garni is the largest pagan temple in the Caucasus. Located quite close to Geghard, it was built in I century A.D. and looks like a miniature Parthenon. In fact it was devoted to Mithra, a god whose monotheistic cult at one point rivalled Christianity. The temple was restored in 1960-s. 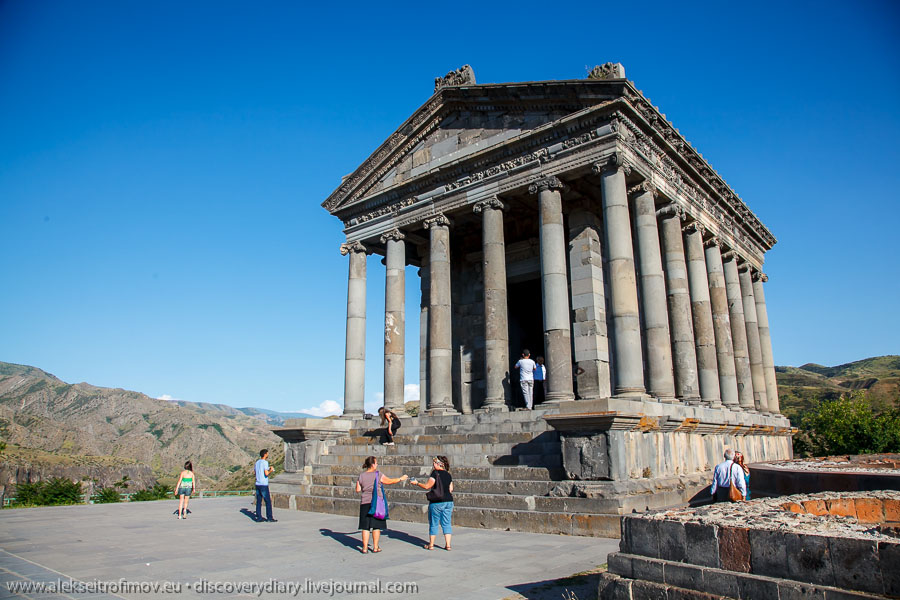 Immediately next to the Garni temple there is a foundation of an ancient church. The cross-shaped plan is particularly evident here. The place is very picturesque as it is surrounded from every side by steep valleys and hills. 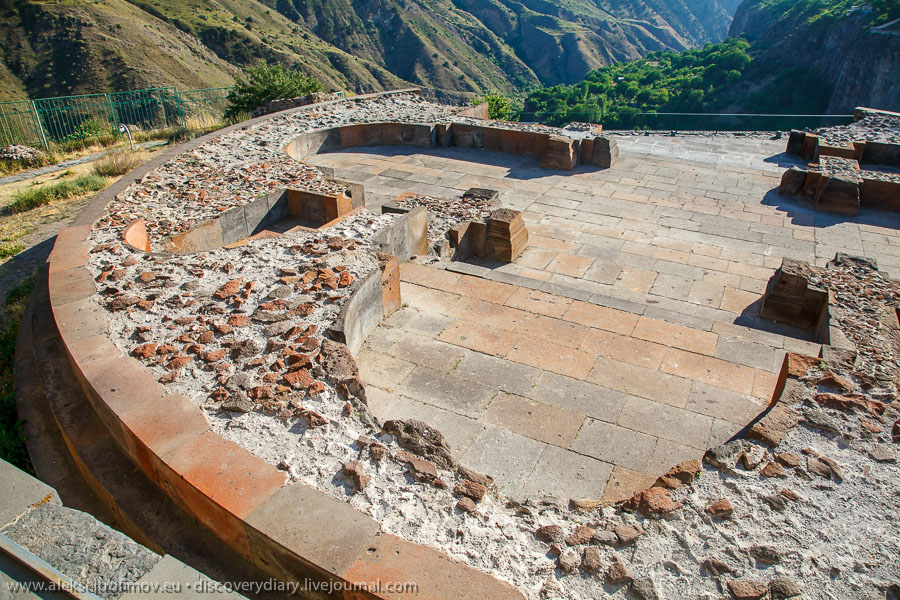 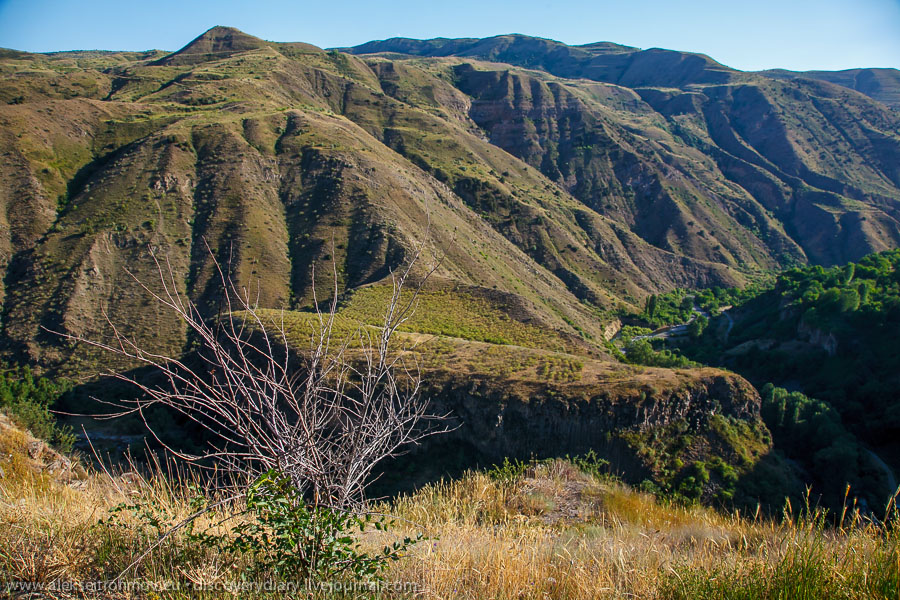 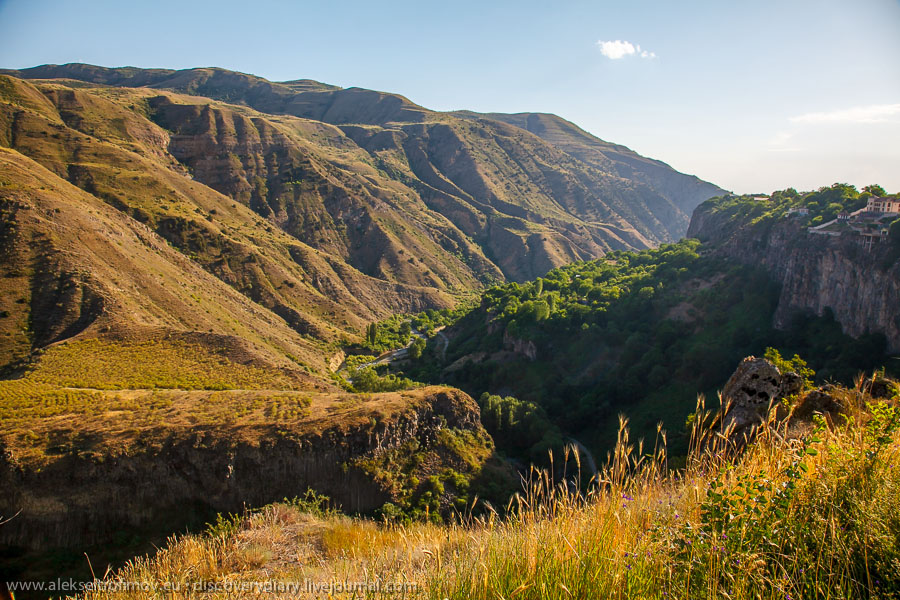 This stone covered with cuneiform is the very stone that Urartu king Argishti used to announce to the world about the foundation of the Erebuni fortress in 782 BC. Erebuni of course eventually became Yerevan. Which makes it 29 years older than Rome. 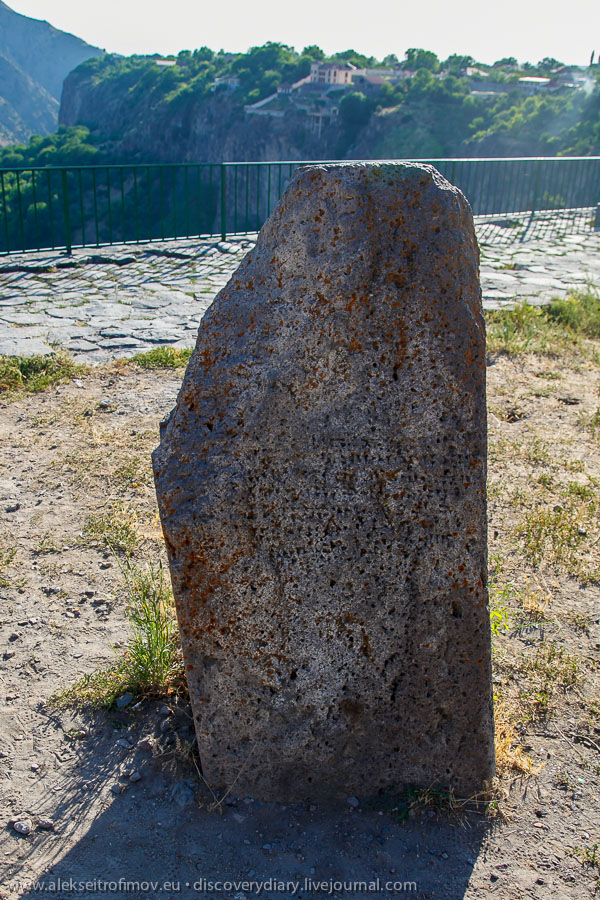 In pagan times thanks to its excellent location and climate Garni used to be one of the favourite residences of the Armenian kings. The Garni temple was in fact the private temple of the king. It somehow survived the Christian times, but was not spared by an earthquake in 1679. The ruins of a palace and a bath lie next to the temple. The bath is particularly well known for a mosaic that covers the floor – a life sized copy is prominent in the Armenian Historical Museum. 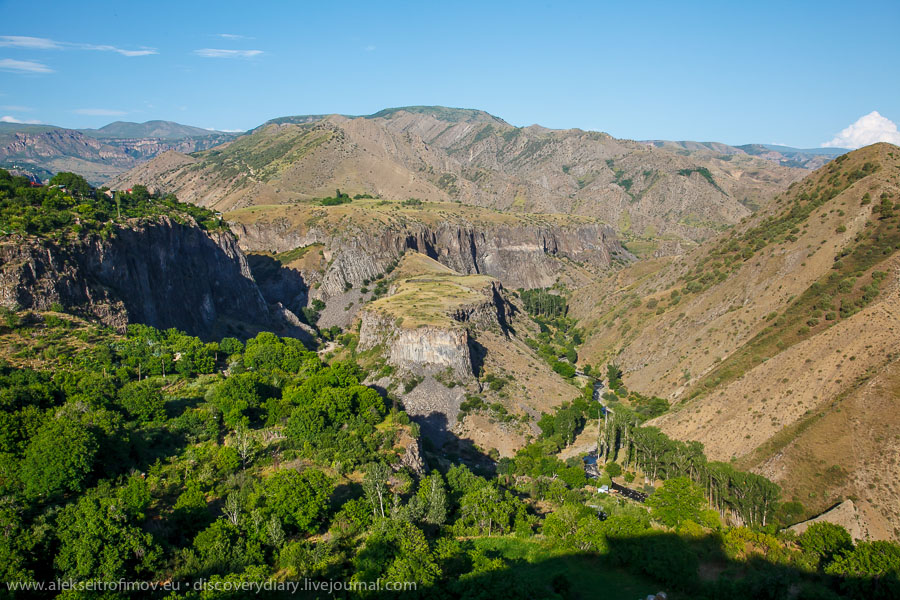