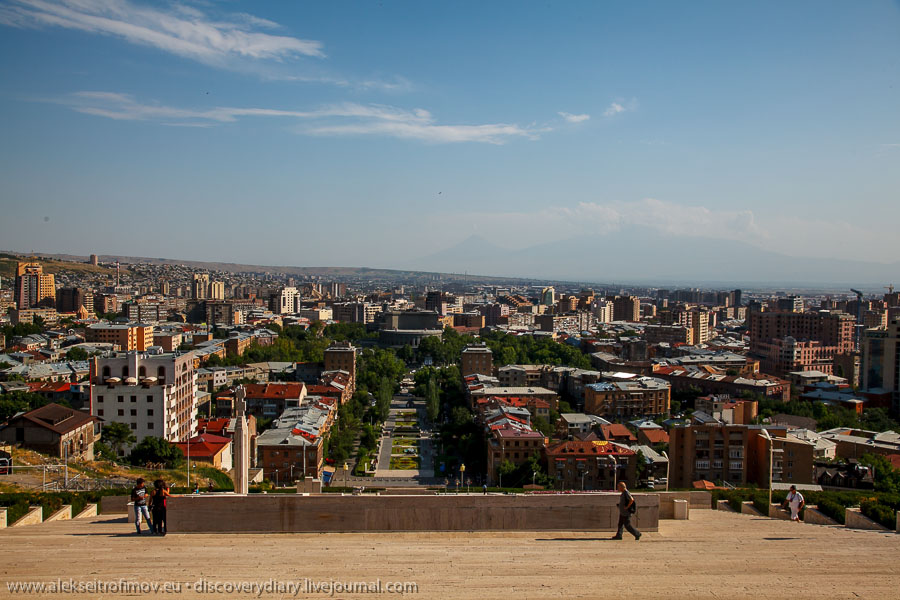 Looking onto Yerevan from the Cascade from a slightly lower point. The Cascade, apart from being a favourite place for promenades and looking at the city, includes a contemporary art museum – the Cafesjian Contemporary Art Centre, so named after the main benefactor, a diaspora Armenian. 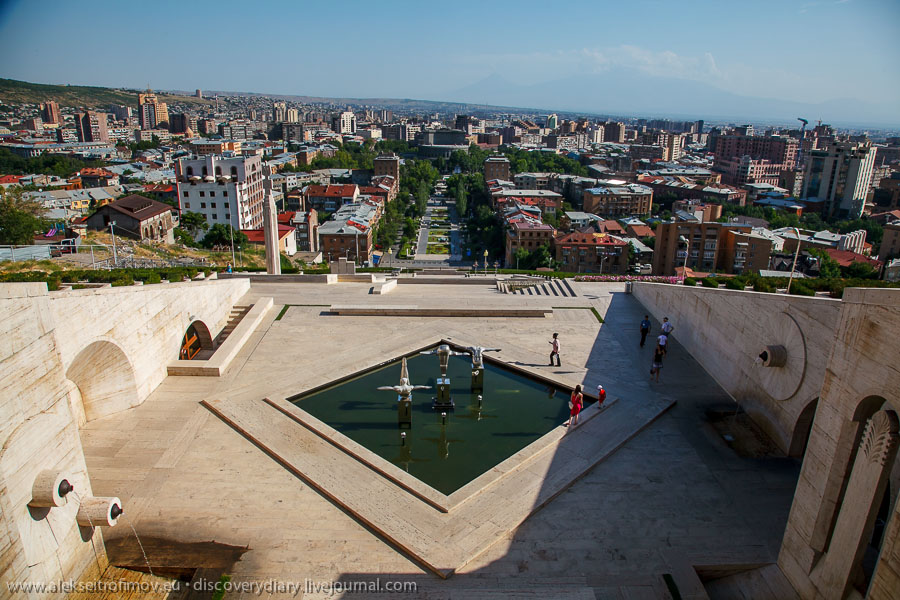 Hence every following platform of the Cascade is decorated with contemporary art objects. 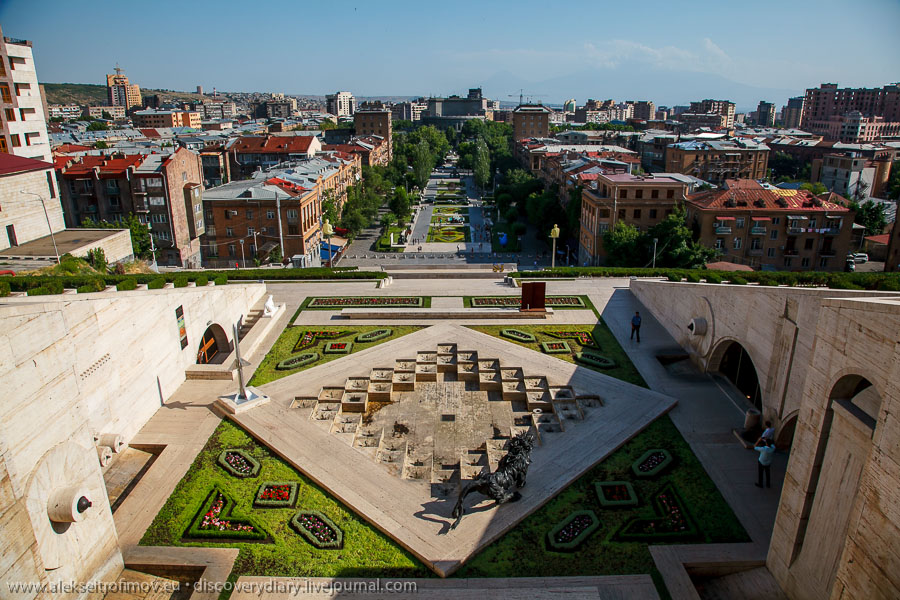 I encountered this sculpture from a Shanghai artist that evokes particular memories in my mind. 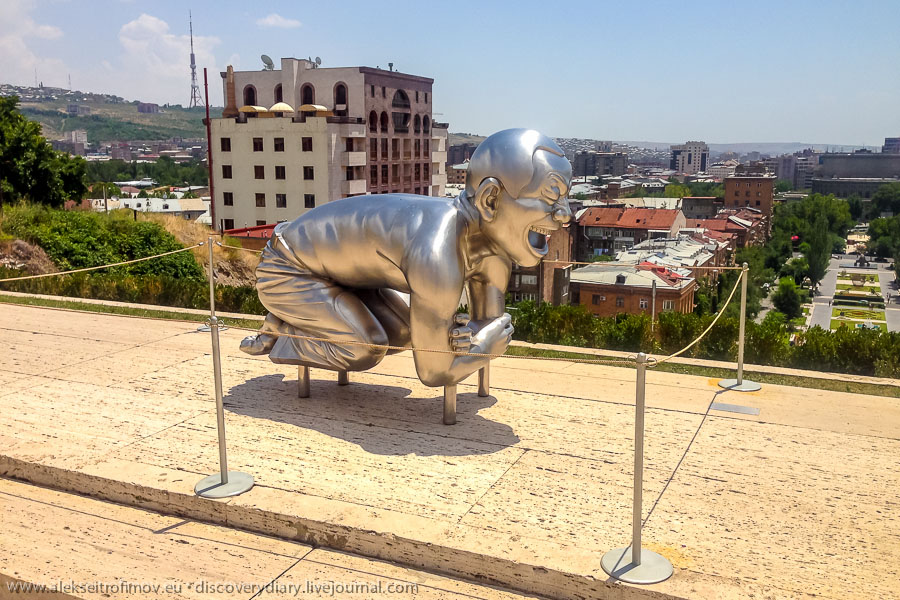 Escalators inside the Cascade that connect levels are hidden inside the hill, much like most of the museum. The way the complex uses the topology of the area is very impressive. 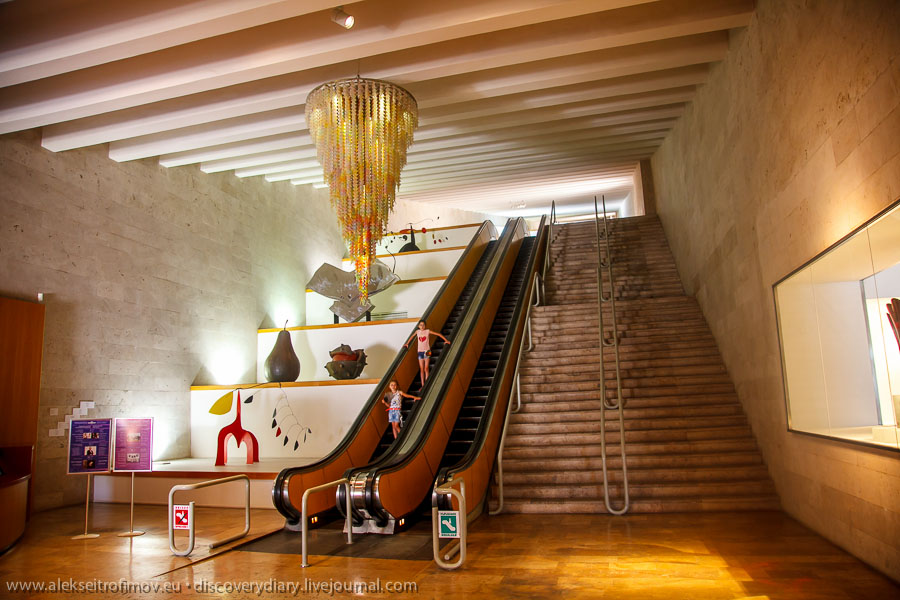 The view of the Cascade from below. 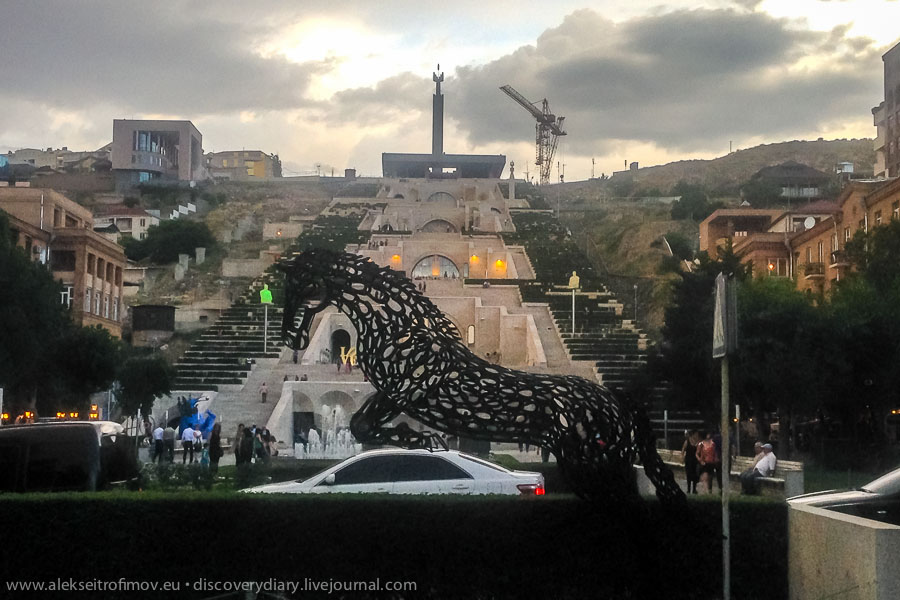 Matenadaran, or the Institute of Ancient Manuscripts. An unusual museum – research centre – library, situated on the side of the hill not far from the Cascade. The largest collection of ancient Armenian books, it impresses you and lets you feel the scale of this culture, much of which has been irrevocably lost in the tumultuous Middle Eastern history. 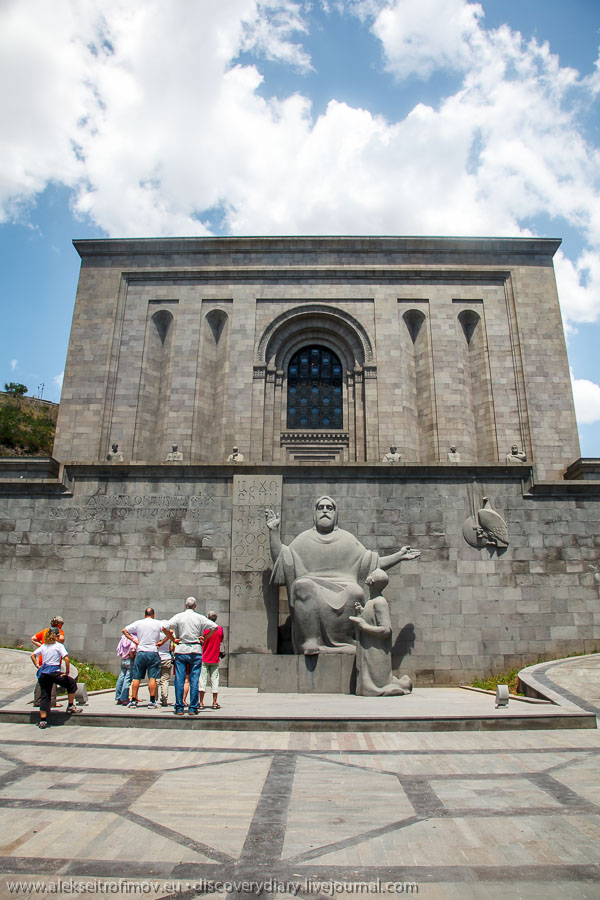 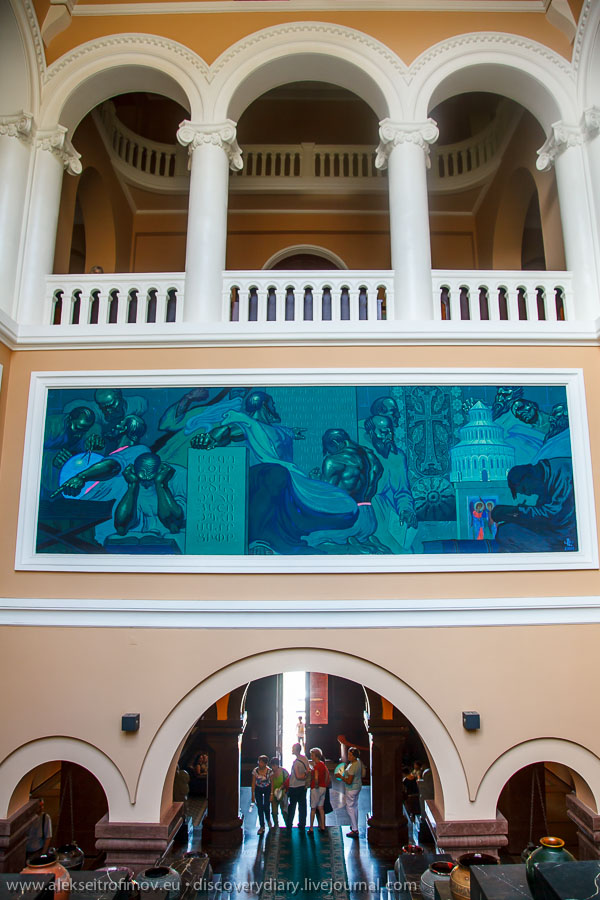 The statue of Mother Armenia is the focus of a park on top of the hill up from the Cascade and Matenadaran. Inside the foundation of this rather imposing statue lies the Military Museum. It focuses on the war for Artsakh (Nagorny Karabakh) between Armenia and Azerbaijan in the early 1990s, told of course from the Armenian point of view. I still cannot get my head around how the Armenians managed to win that war. Only thanks to an incredible effort and luck. Both sides essentially committed ethnic cleansing on the territories they controlled. On the lower level of the museum – well hidden – I discovered with some surprise a museum of WWII telling of Armenian participation in it, as part of the Soviet army. The ward followed me and switched the lights on and off which illustrates how often this part of the museum is visited. 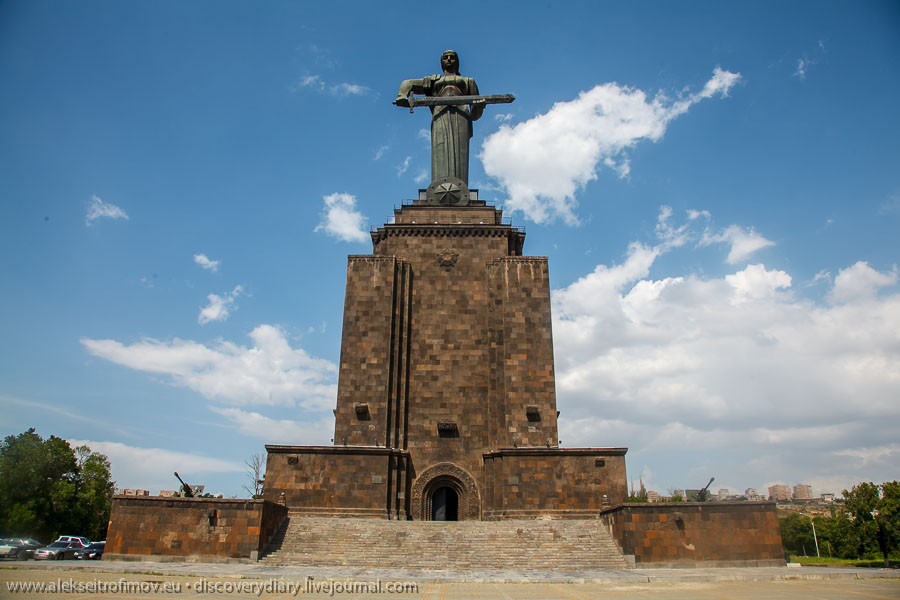 View of Yerevan from Mother Armenia: 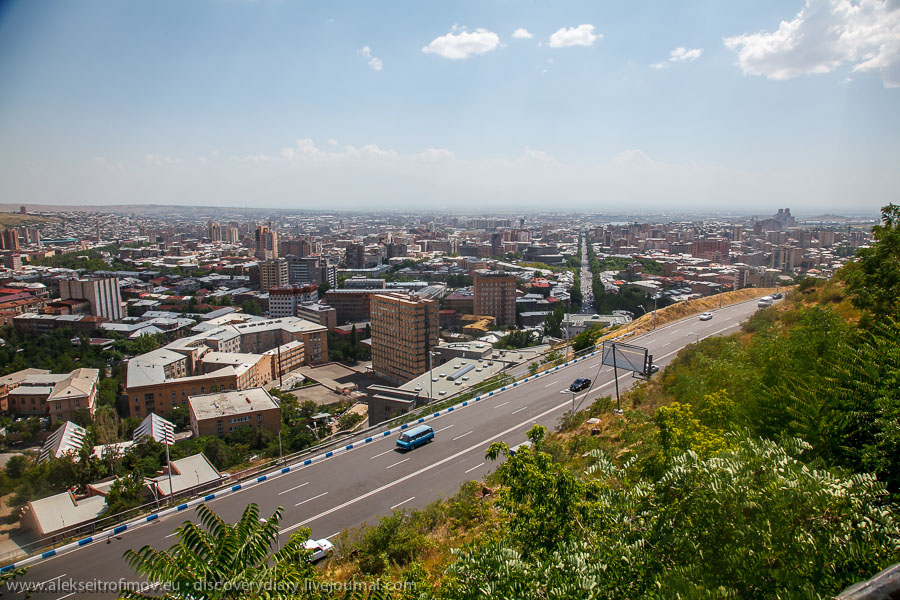 The Republic Square is the second centre of the city. Most of the buildings in Yerevan are made from pink tufa (a variety of limestone), which gives the city a particular – pink – aspect. 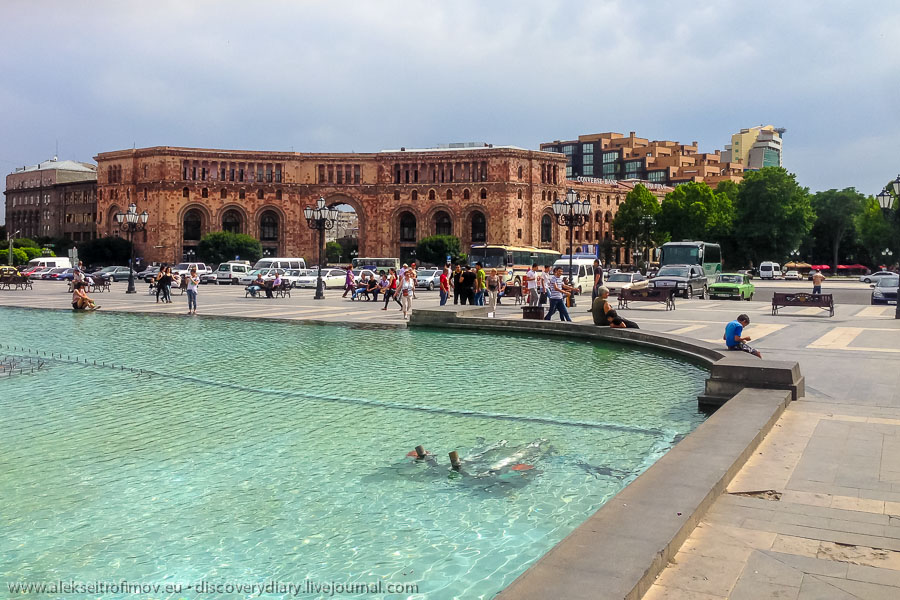 The main square from the South. The Museum of Armenian history in the centre. 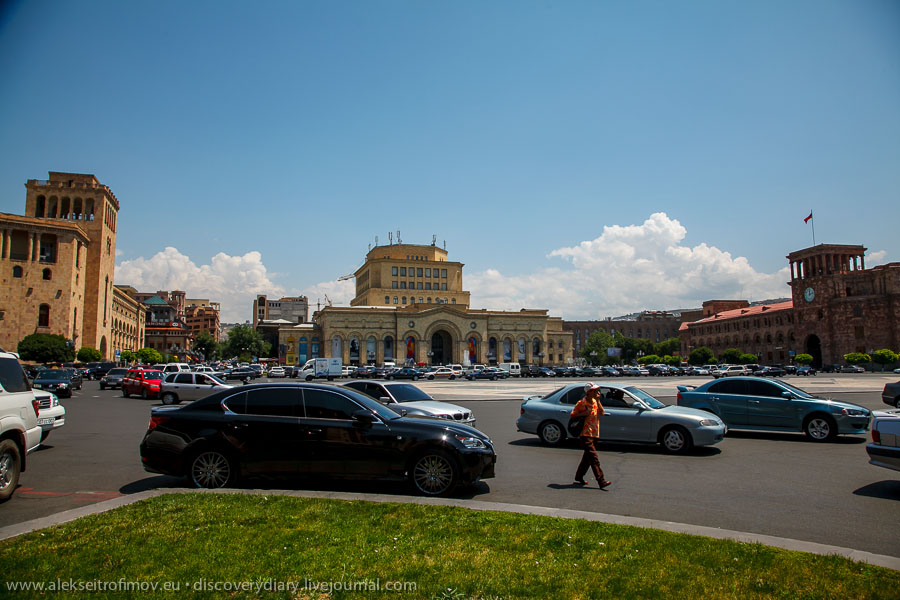 Every evening from 8 to 10 a musical show takes place in the Republic Square. The crowds enjoy the spectacle. 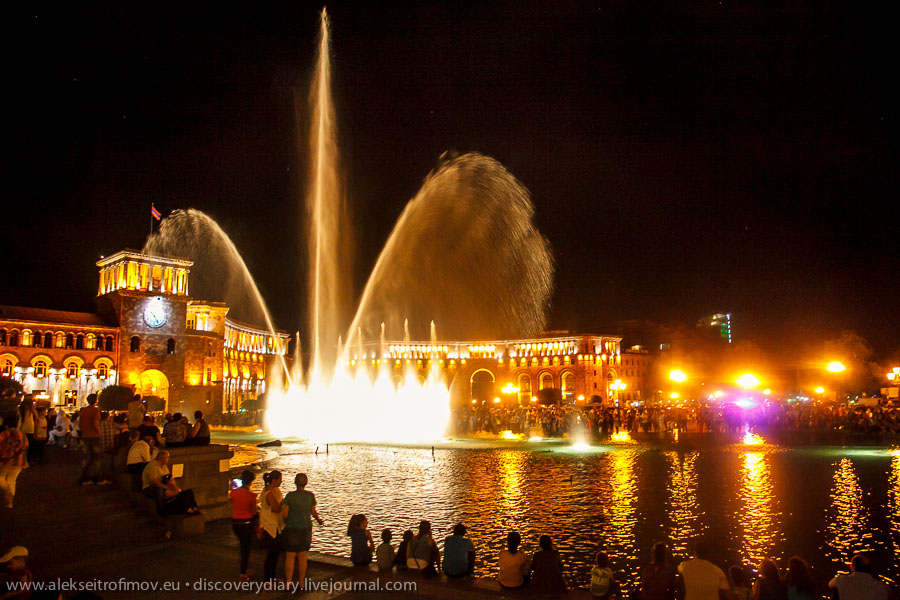 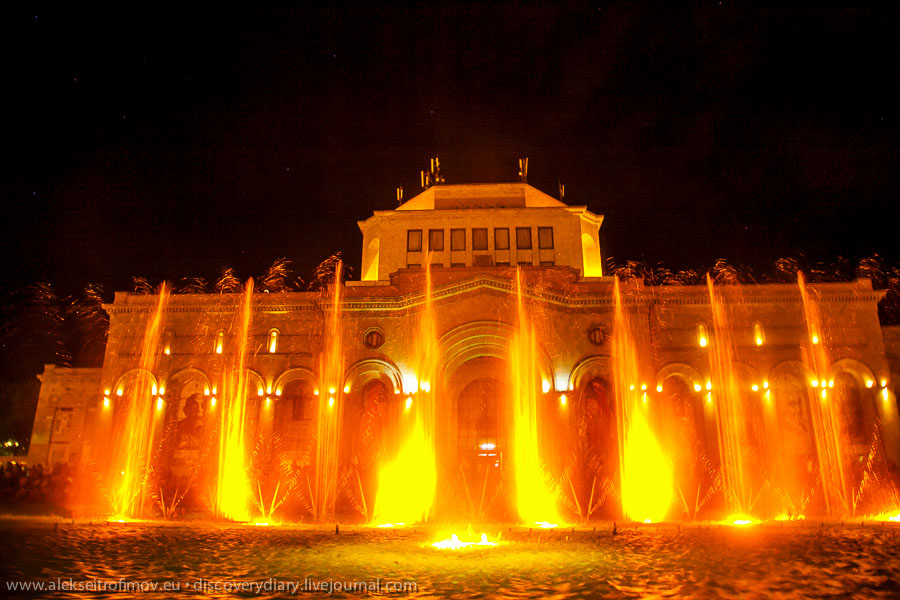 A bust of Academic Sakharov graces the square of his name. Only thanks to the (temporary) democratisation in Russia Armenia regained its independence. 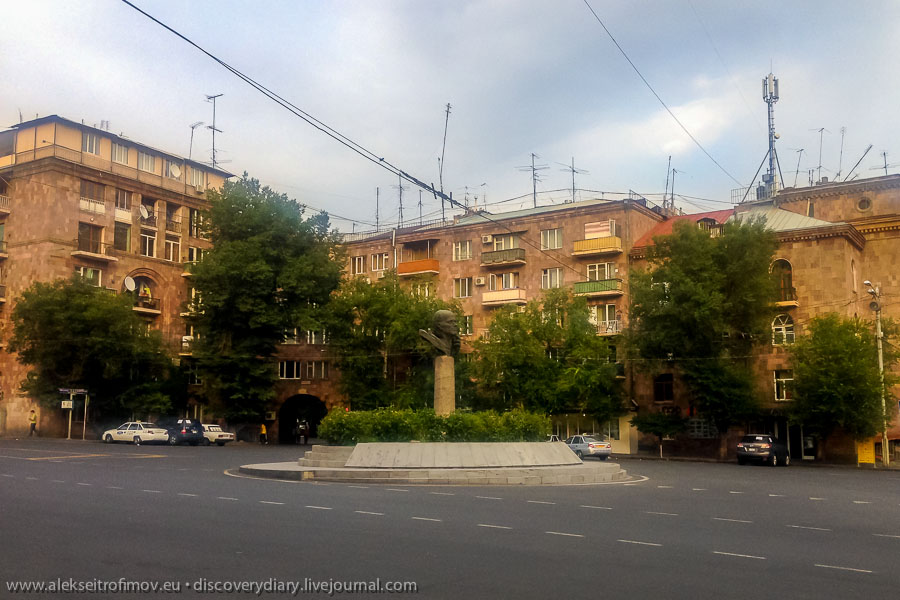 A Saturday market in Yerevan: 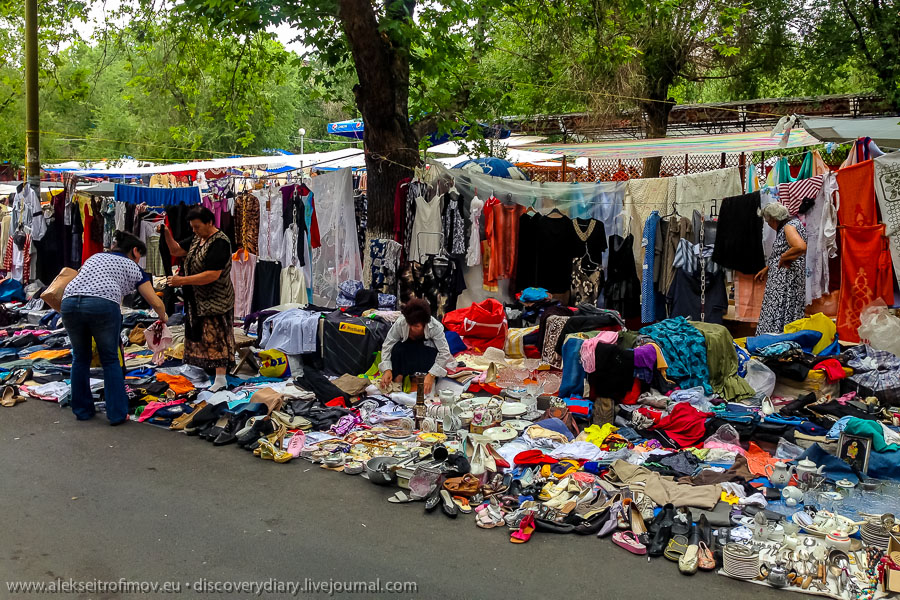 The Museum of director Sergey Parajanov to the West of the centre: 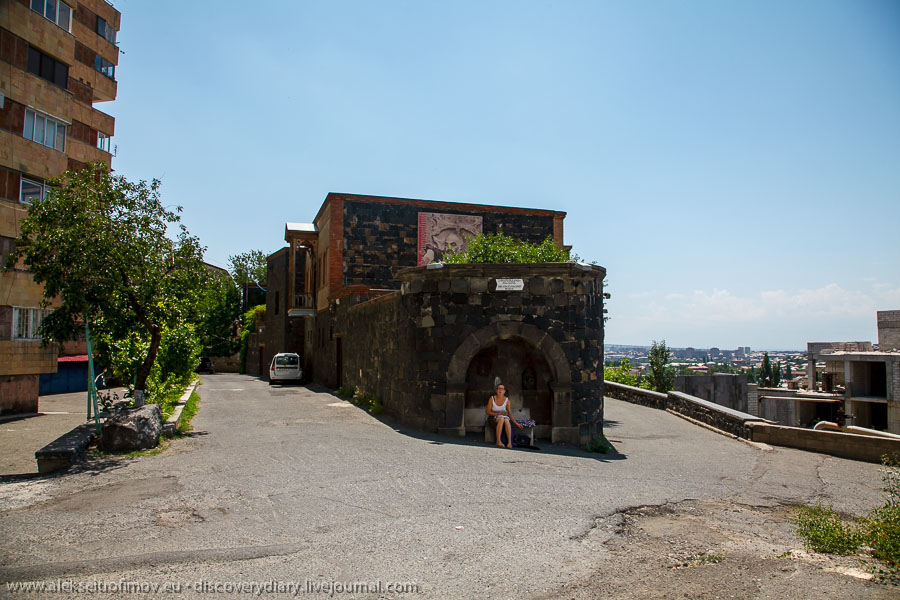 A view of a stadium from the Parajanov museum: 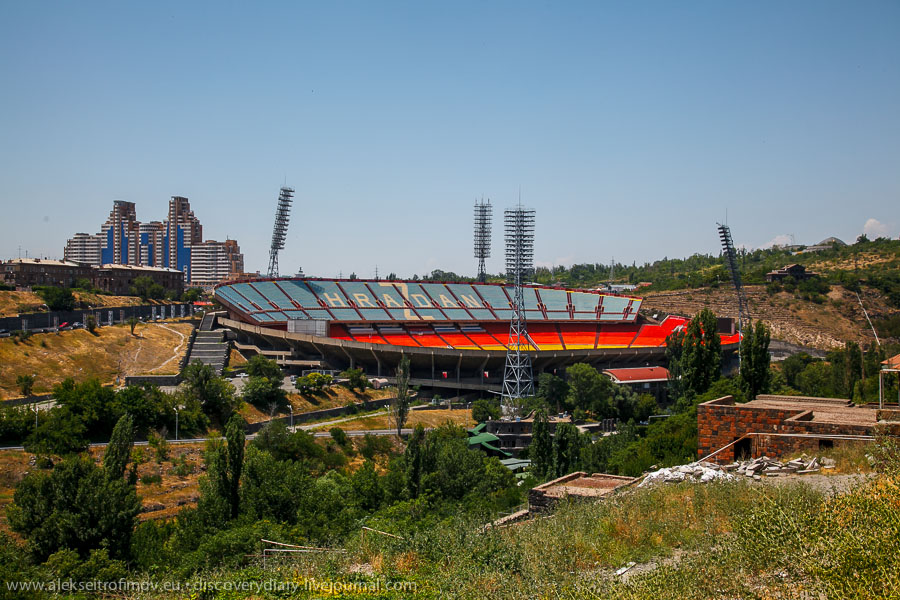 One day I set off for the town Vagarshapat. Vagarshapat is the formal name of the town where the Etchmiadzin cathedral is situated, although the name Ethcmiadzin will be used by all and everyone. It turned out that to get there is really easy. The classical way is to take a minibus (marshrutka) from the Cilicia station, but as I had no time to look for a bus going there, I simply took a taxi all the way to Etchmiadzin. We agreed on the price of 2500 drams (about €4) for him taking me 20km to Etchmiadzin and stopping on the way in Zvartnots.

Zvartnots is a 7th century cathedral which was once the proudest building in all of Byzantium. The emperor even visited the opening ceremony. It has reached our days in ruins, but even the ruins let you see what an impressive building it must have been. You must pay to photograph in Zvartnots and I opted out – the midday sun was not the best moment for photographing ruins. And so my talkative and friendly driver took me further to Etchmiadzin. Most people in Yerevan speak perfect Russian, seem to genuinely enjoy talking to you and sharing their local knowledge.

Etchmiadzin is a whole complex of buildings in the centre of which is the spiritual heart of Armenia – and the world Armenian diaspora – the Etchmiadzin cathedral. When I visited, the cathedral was undergoing restoration, but was still open to enter (no photography allowed inside). The cathedral stands here from 4th century onwards – that is from the moment Armenia adopted Christianity. As the Armenians will remind you loud and clear, Armenia was the first country in the world to adopt Christianity as a state religion. A pagan temple stood here before that moment, and apparently the pagan altar is still hidden somewhere in a cave below the cathedral. The Catholicos (the head of the Armenian church) resided here for some centuries, then from 5th to 15th century his residence moved around Armenia before coming back here for good.

I arrived in the cathedral shortly before 5pm. There is a sacristy inside the cathedral which holds many important relics, none more important than the spear that the Romans used to pierce the body of Christ. The spear was initially preserved in the monastery of Geghard (which appropriately means “spear” in Armenian) – I will write about Geghard in my next post. Later the spear was moved to Etchmiadzin. The guard refused to let me enter the museum saying it closes at 5pm. So I went to the ticket office – located outside of the cathedral – and kindly insisted they sell me a ticket. My main argument was that I needed only 1 minute to see the spear. Finally a very gentle girl who worked there took me by the hand to see the spear – without any payment at all. Obviously I was impressed by the Armenian kindness. 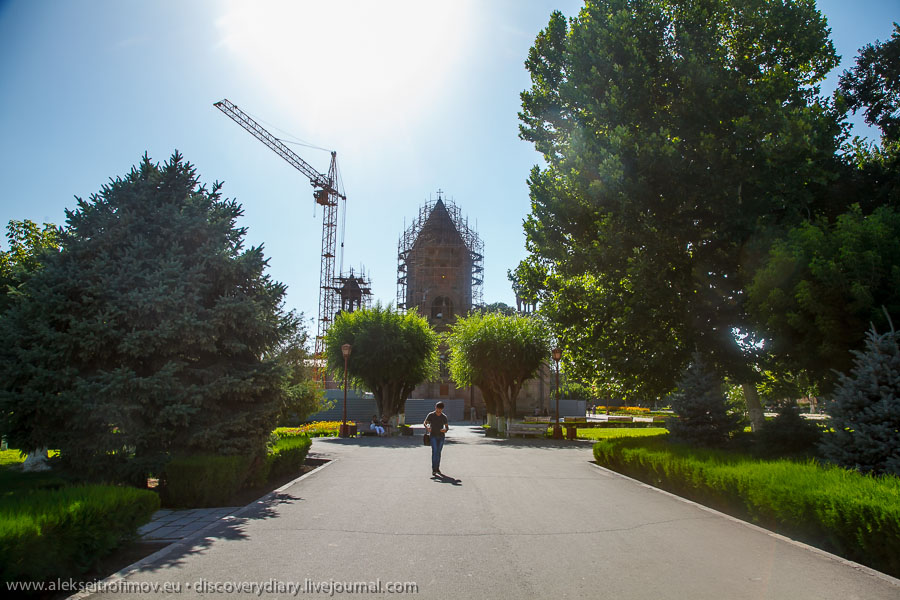 Apart from Ethchmiadzin, there are three other important churches in Vagarshapat. Each church is devoted to one of the fourth century nuns. According to the legend, the virgin nuns arrived in Armenia fleeing the Romans. The pagan king of Armenia wanted to marry them. The nuns refused and were murdered. The churches in their honour are Saint Gayané, Saint Hripsimé and Saint Shokhagat. The view onto Saint Gayane from Etchmiadzin. 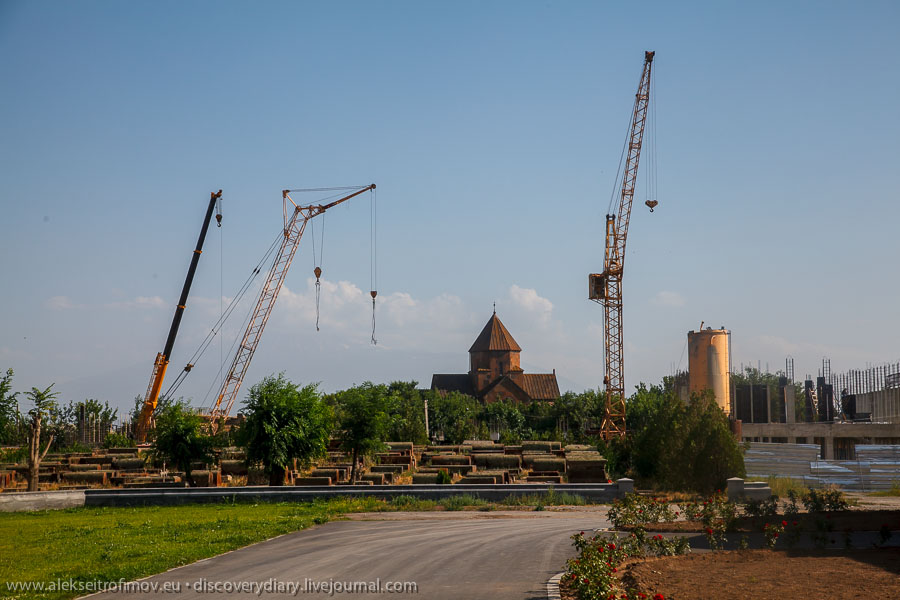 The church of Saint Gayane was built in 630 and hasn’t been changed since. 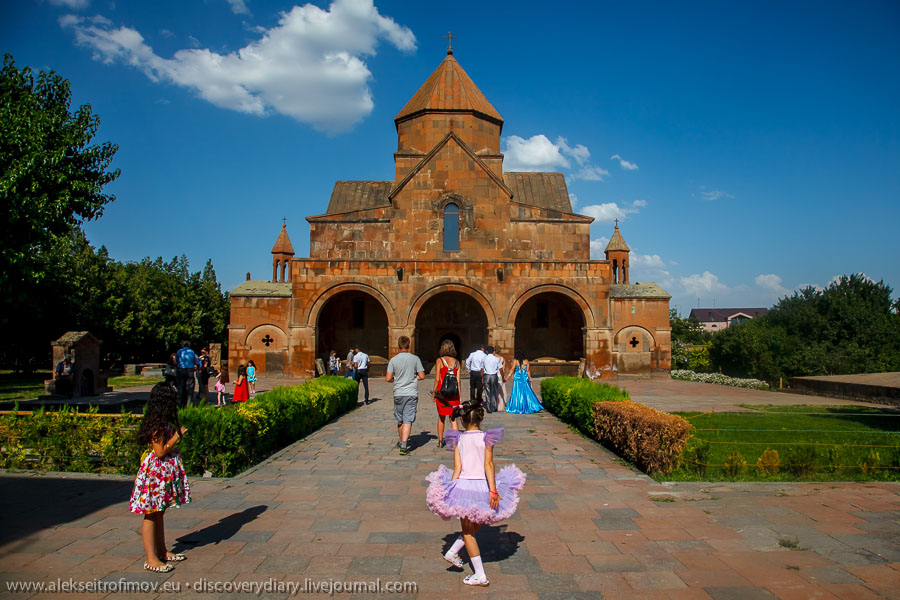 The church of Saint Hripsimé built in 618. It is a 20 minute walk from Etchmiadzin on the main avenue of Vagarshapat. 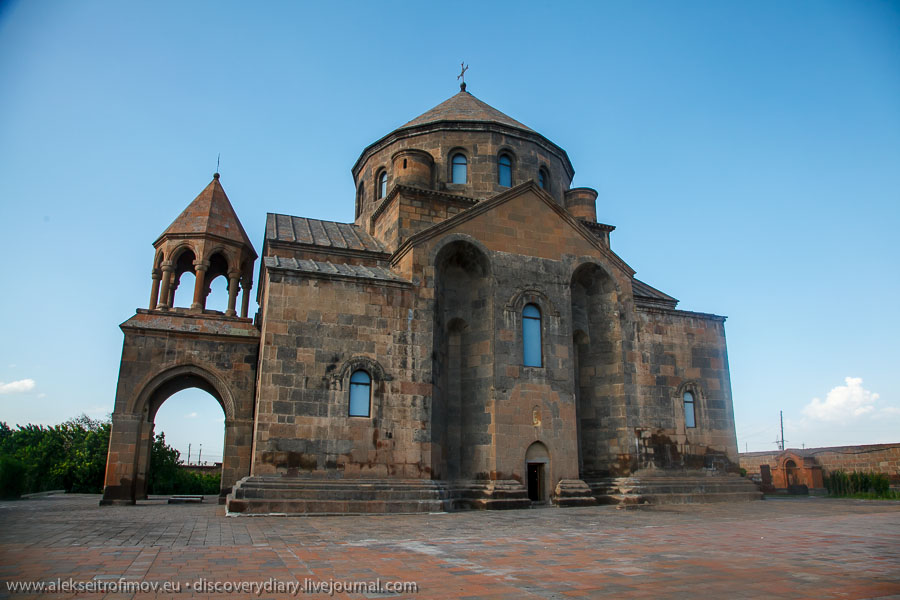 The church of Saint Shokhagat. The name of the third nun is not known, Shokhagat means “drop of light”. This church was built a thousand years later than the other churches, in 1654, but the foundations date from as far back as 4th century. 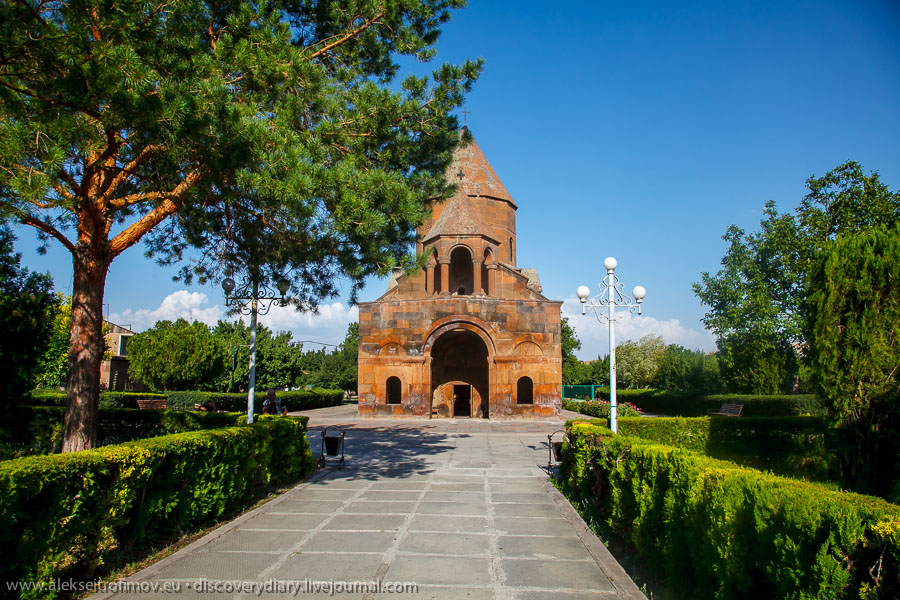 This last church is the most remote and the least visited by tourists. When I arrived a service was being held. It had a particularly local character: just a few parishioners of all ages, unassuming priests, their chanting in low voice – I spent quite some time there, soaking up the atmosphere. 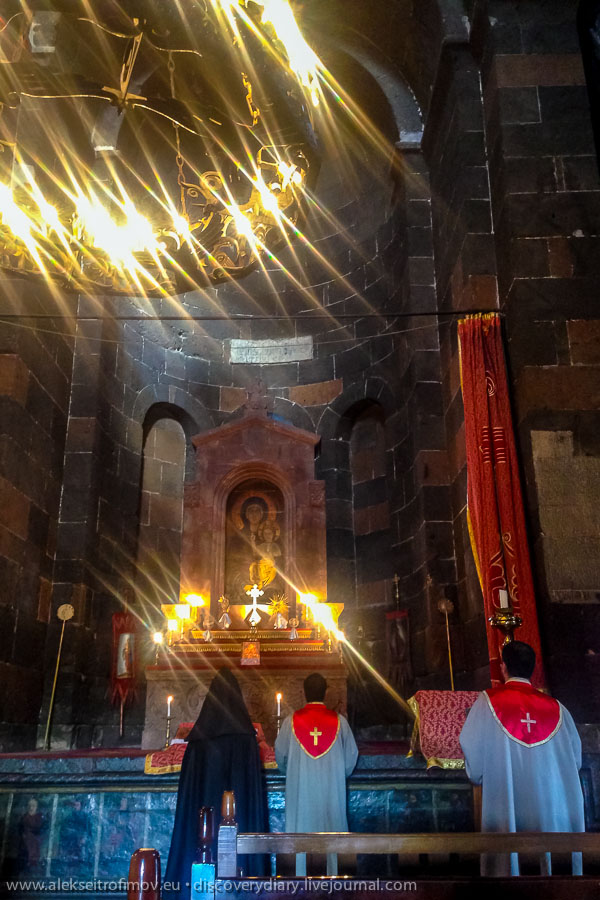 Finally, some photos of Armenian food. The crown jewel is horovats, Armenian barbecue. Incredibly tasty, but no way you could not eat this mountain of food every day. The Areni red wine is also notable. 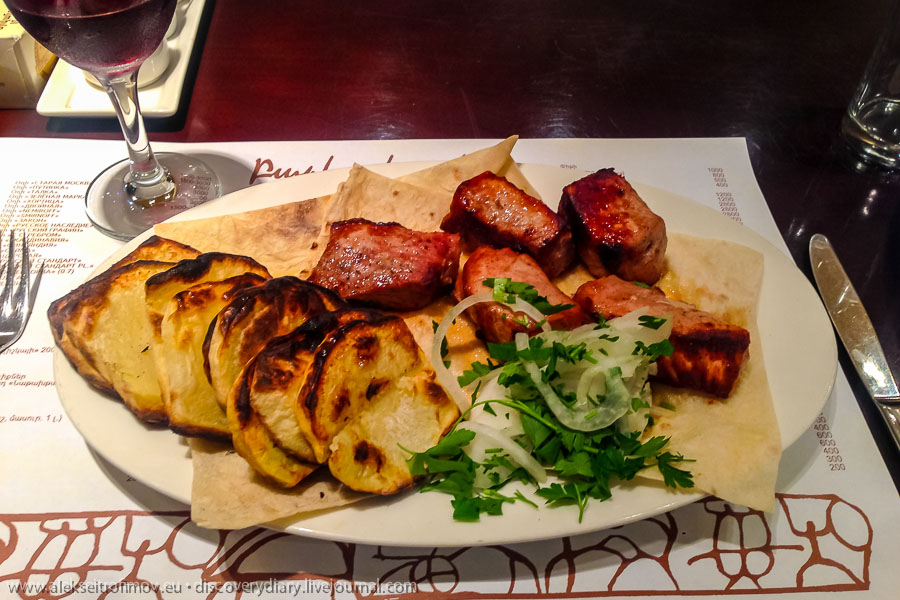 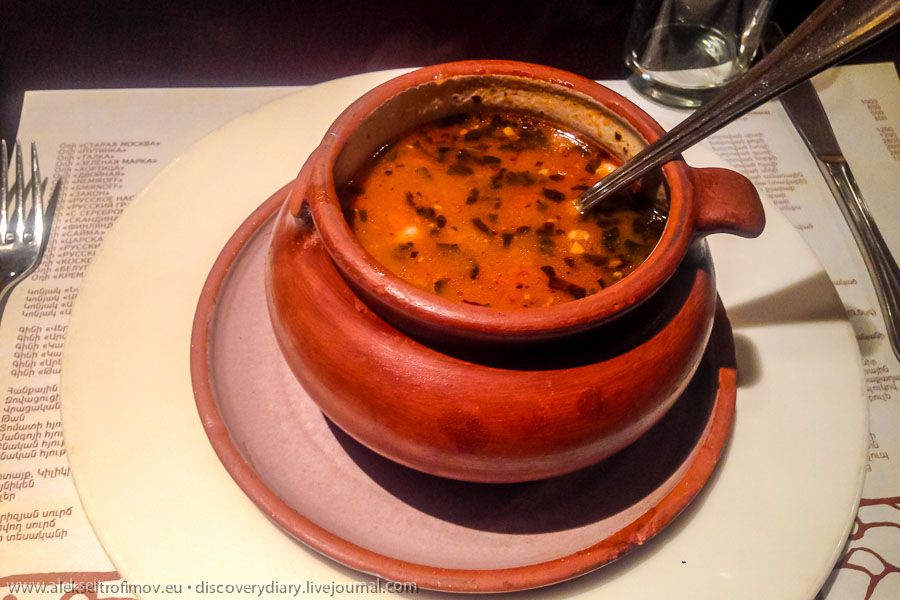 Another clear lamb soup in the Caucasus restaurant. 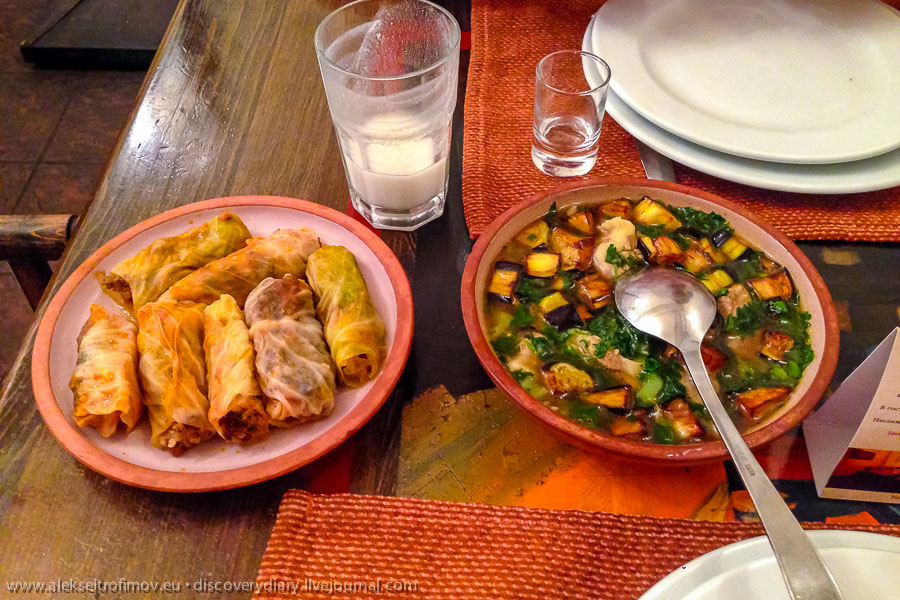 In one of the cafés in Vagarshapat I discovered okroshka, a dish from my childhood. It is made from kvass (a kind of fermented non-alcoholic beverage obtained from black bread) with pieces of cucumber and other vegetables. 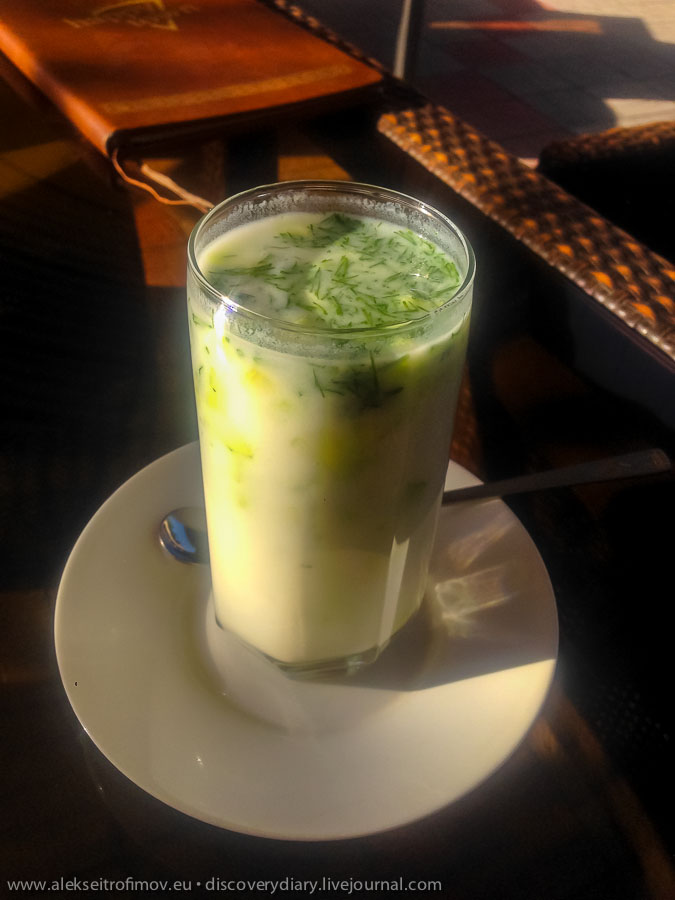 In the Club resto in the centre of Yerevan. Expensive by local standards, but a must. A soup from three different types of mushrooms – delicious. 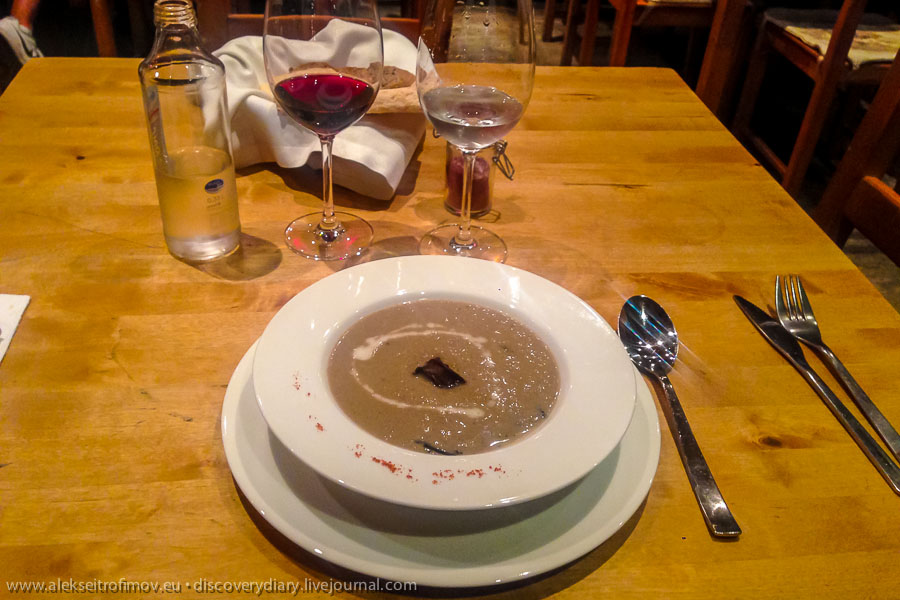 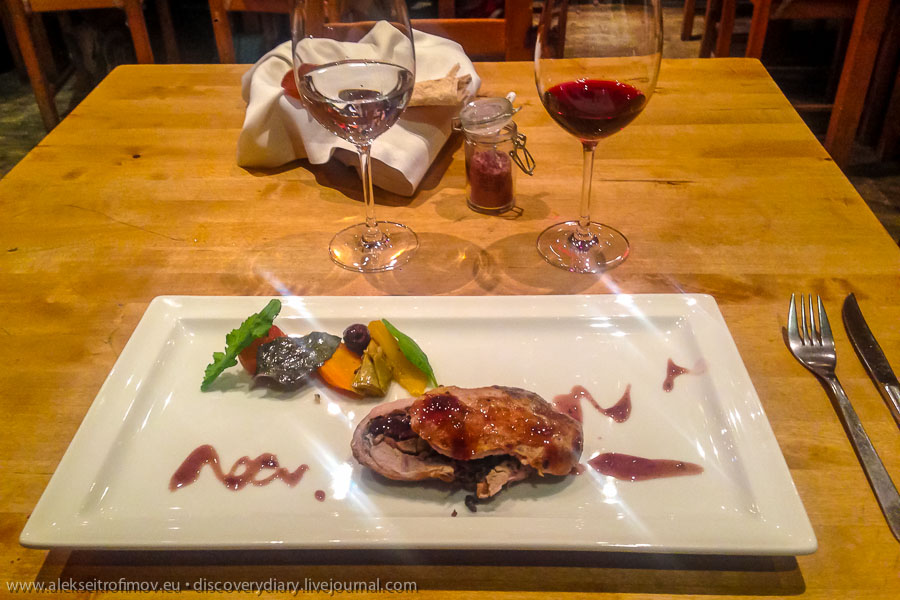 One thought on “Yerevan”