My trip started from Brussels as far back as 5 July 2013. After almost exactly 500 days of travelling I found myself in Brussels again. I took a train from Cluj to Budapest and then a couple of days later flew Wizzair to Brussels-Charleroi. My first impression from being back in this city where I had spent six years of my life was a striking feeling hat nothing at all had changed. My favourite cafés were just as cozy – and full; the construction works in Arts-Loi and Schuman stations seemed just as hopeless – and seemingly without any progress during the intervening 1.5 years. My friends’ habits had not suffered a tiniest adjustment.

Of course after a while you start noticing changes. Quite a few interesting new places have popped up in the city centre. Free wifi which used to be a rarity in Brussels is now available in most unexpected places. The church of St Catherine mutated from horrifying black to pristine white. New faces – the new Commission – are looking at you from a huge poster on the side of the Berlaymont. And of course there have been important changes in my friends’ lives.

This time around I spent almost a month in Brussels, thanks to the kindness of my friend. It was a time of rest and reflection. The main question that I was asking myself was what comes next? What is next in my life? What is next on my trip? Is it over or will it continue?

The answer to this latter question is two-fold. Yes, the grand Round-The-World trip which started in Brussels in July 2013 by definition ended in Brussels in November 2014. I have come full circle.

But on the other hand I am not truly back to Brussels. I am not returning to my old life. Not yet, anyway. From here on it’s a new journey and I will continue to be somewhere in the world for a while. There is still a number of things I would like to do and experience before I settle down.

Extremely organised as I am, I possess a list of places in Brussels/Belgium that I would like to visit. This list was a permanent work-in-progess while I lived in Brussels: something was always added, something crossed off as I went. One place figuring prominently on the list was Enghien (à la française), or Edingen (in Flemish). I became infatuated with it after reading the Estonian author Tõnu Õnnepalu’s book Flandria päevik (i.e. A Flemish Diary), which was written around there (he was on an artistic scholarship). Enghien is famous for its superb park which used to belong to one of the most illustrious Belgian aristocratic families – the dukes, later princes, of Arenberg.

It is surprisingly easy to get there from Brussels. You board a train at Bruxelles-Central and in 25 minutes you descend in a small Walloon town. Enghien is located precisely on the linguistic border, i.e. the border between Wallonia and Flanders. It is one of the so-called communes à facilité,  a complex, typically Belgian notion. A commune à facilité is a commune which belongs to one linguistic community, but which provides specific rights for members of another community. In the case of Enghien, the town belongs to the French-speaking community, but the speakers of Flemish have special rights there. These rights include things like the right to address and be addressed by the administration in their native language and such. I kept thinking wouldn’t it be lovely if we introduced such communes à facilité in Estonia? Ironically, the law on national minorities foresees them, but not one commune of this sort has gained the approval of the government despite repeated applications.

Back to Enghien though, it is also a member of the Slow City movement, founded by a group of small towns in Italy inspired by the idea of Slow Food. Indeed Enghien with its sleepy, cozy and classy atmosphere seems to fit this notion rather perfectly.

The entrance of the park: 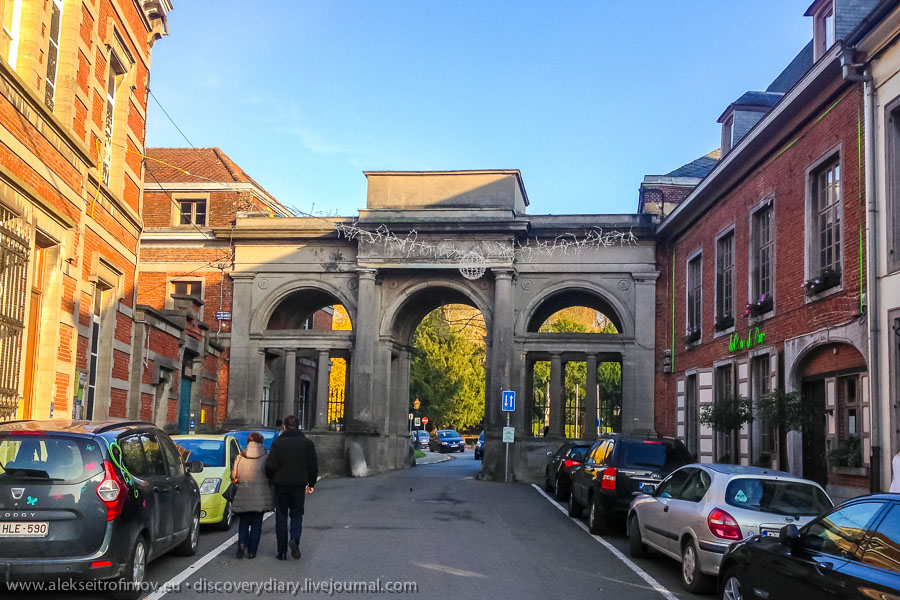 The map of the park – I made a photo immediately as I entered and it was a very good idea. The park is surprisingly large and it’s actually easy to get lost, even while using the GPS of my iPhone. 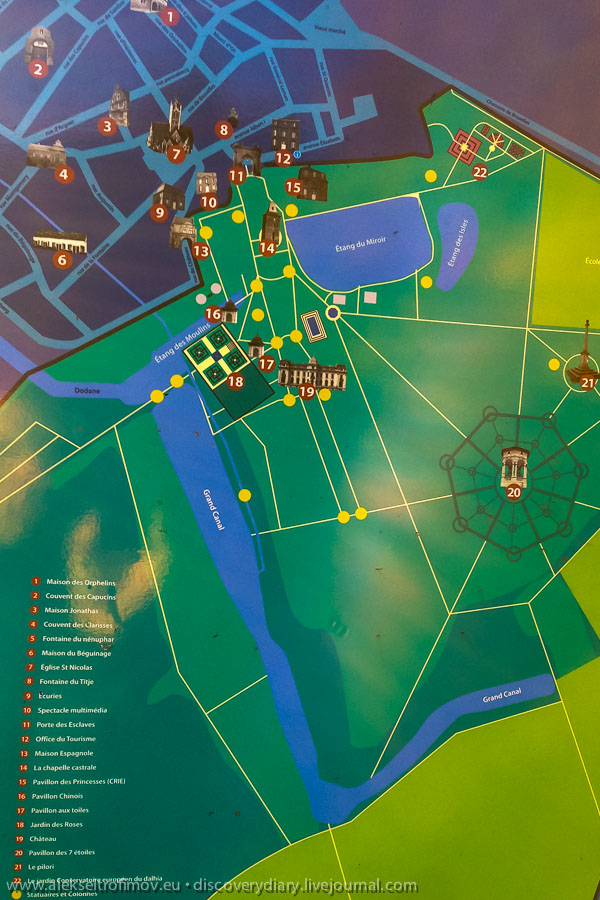 Approaching the main edifice inside the park – the so-called chateau Empain: 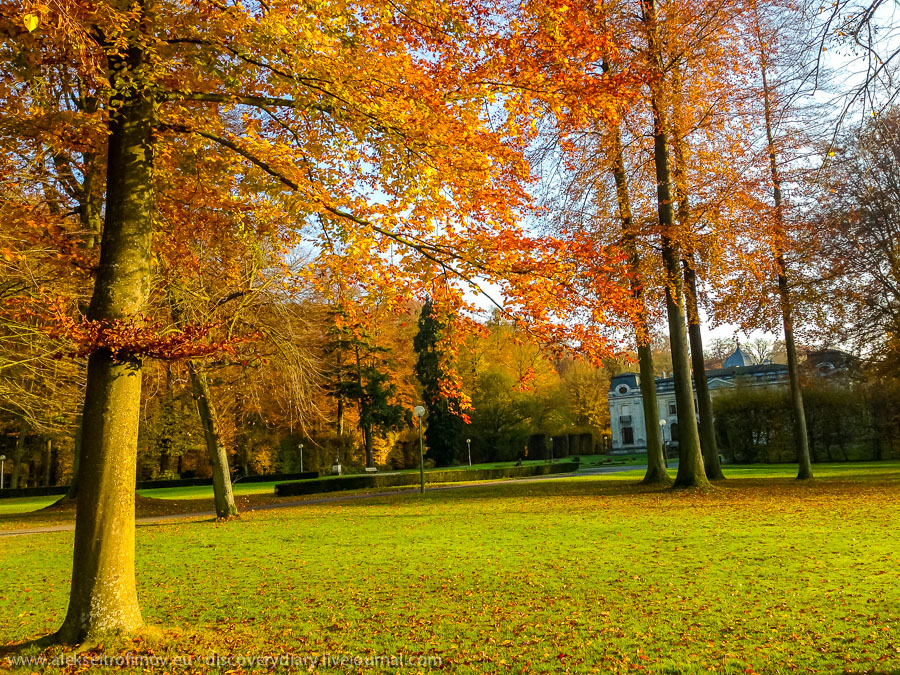 This reincarnation of the chateau was only built in 1915. Several other chateaux stood in the same spot, but various woes befell on them through the years, such as a disastrous fire. Nowadays the building is owned by the city government, which bought it from the descendants of the famous Baron Empain, and is used as a cultural space. 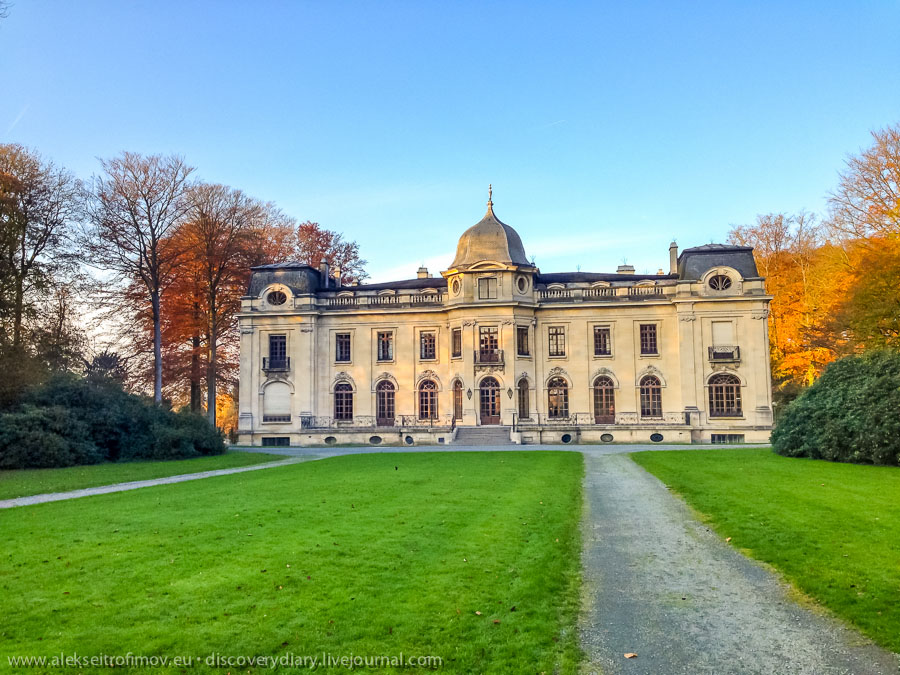 A look back on the town from the park: 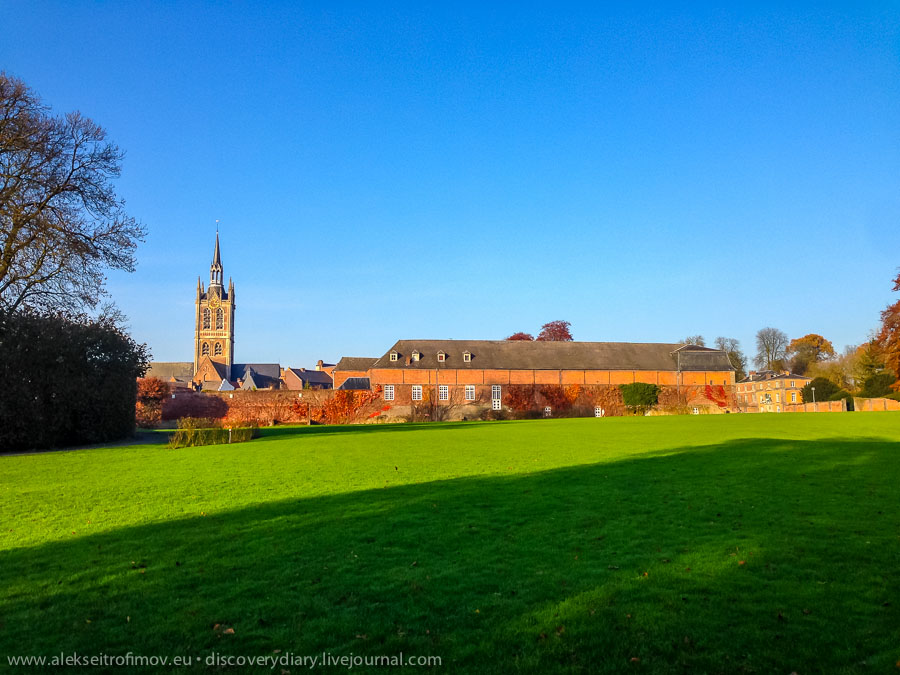 The French gardens next to the chateau: 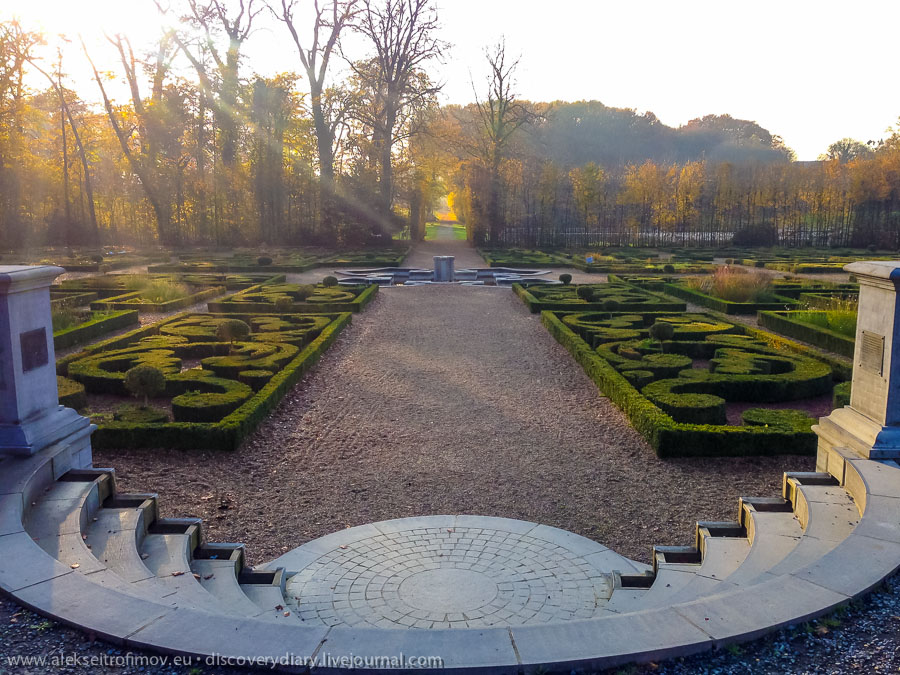 A fairytale autumn in the park: 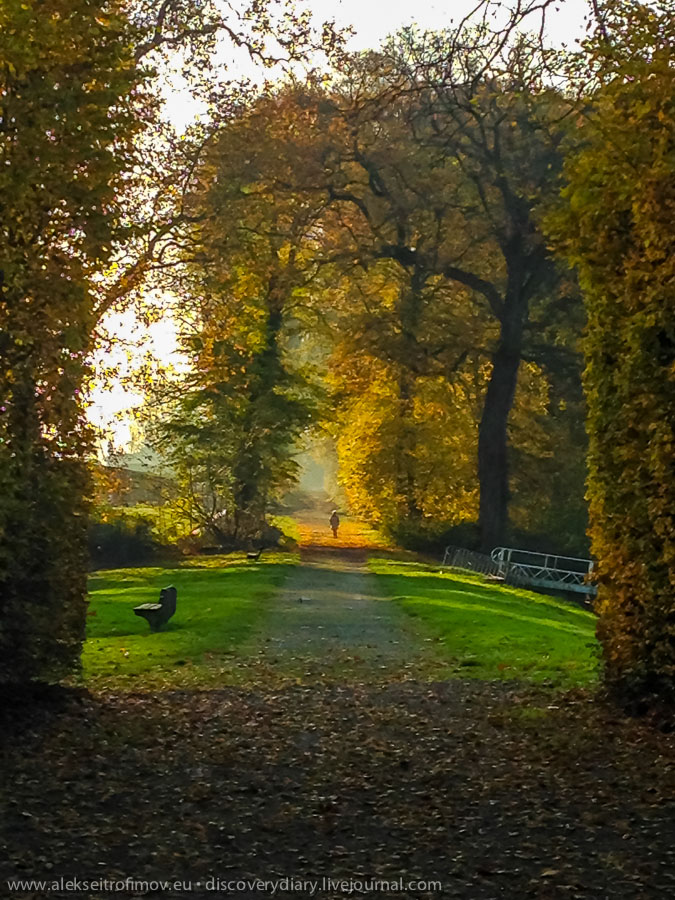 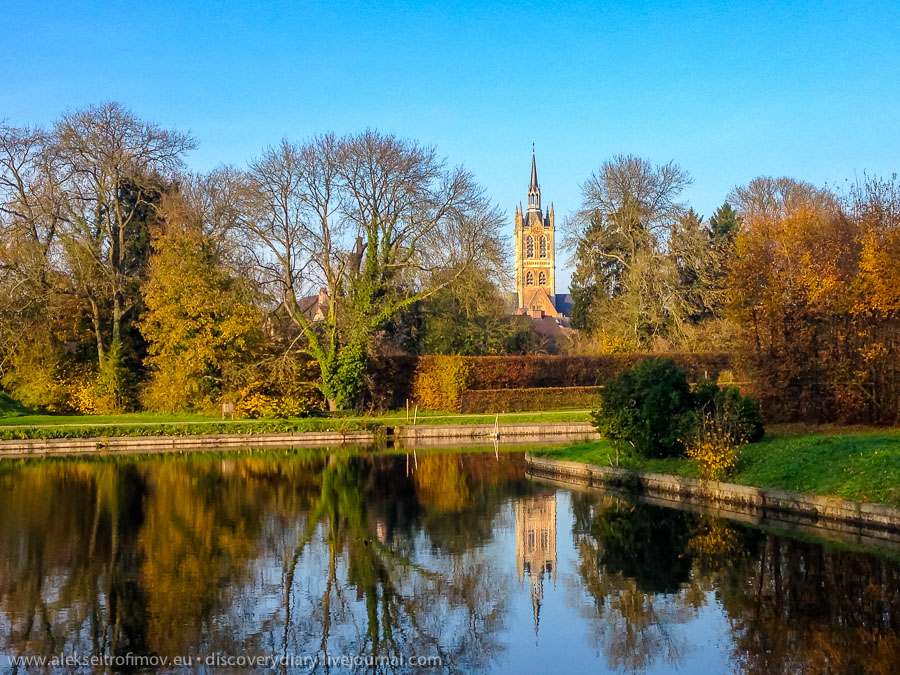 As you lose yourself inside the park, eventually you get to this pavilion built in the centre of a pond. Seven paths radiate from it in every direction, creating a shape of a star on the map. Hence its name – Pavillon des 7 étoiles, Pavilion of Seven Stars. 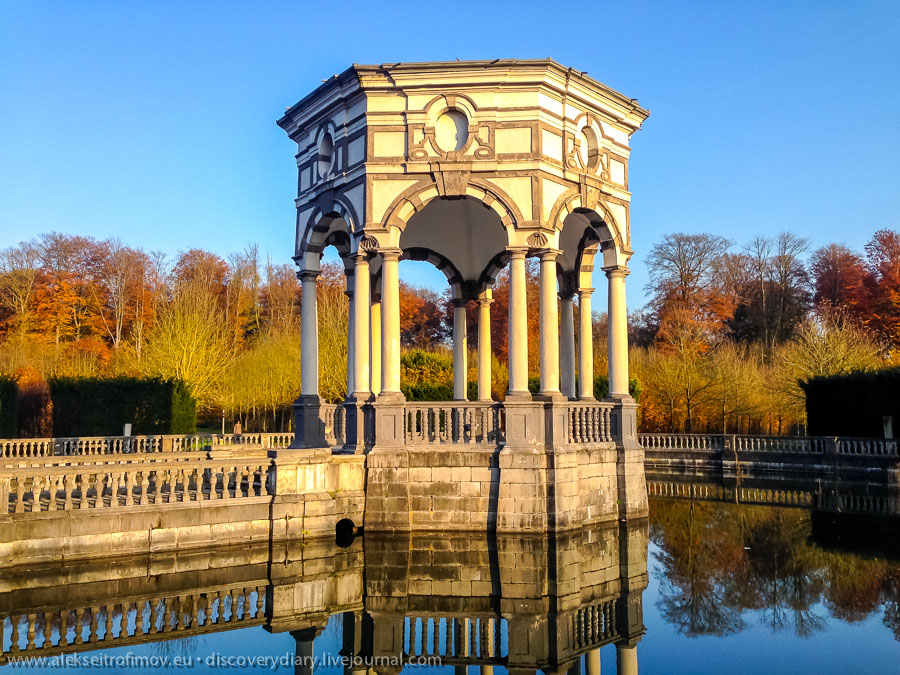 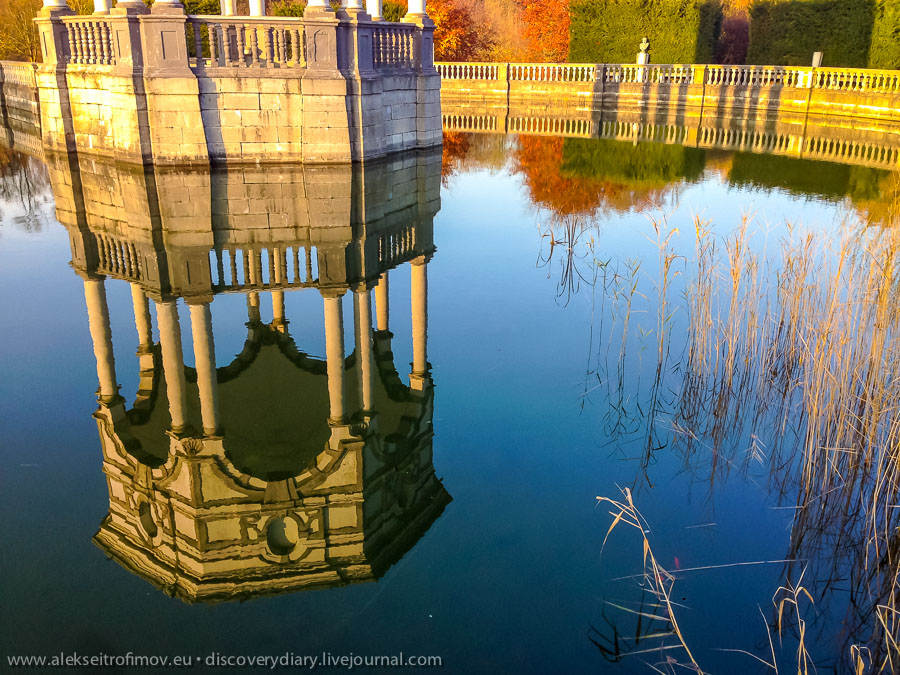 And a Capitoline she-wolf is waiting for me somewhere in the depths of the park. 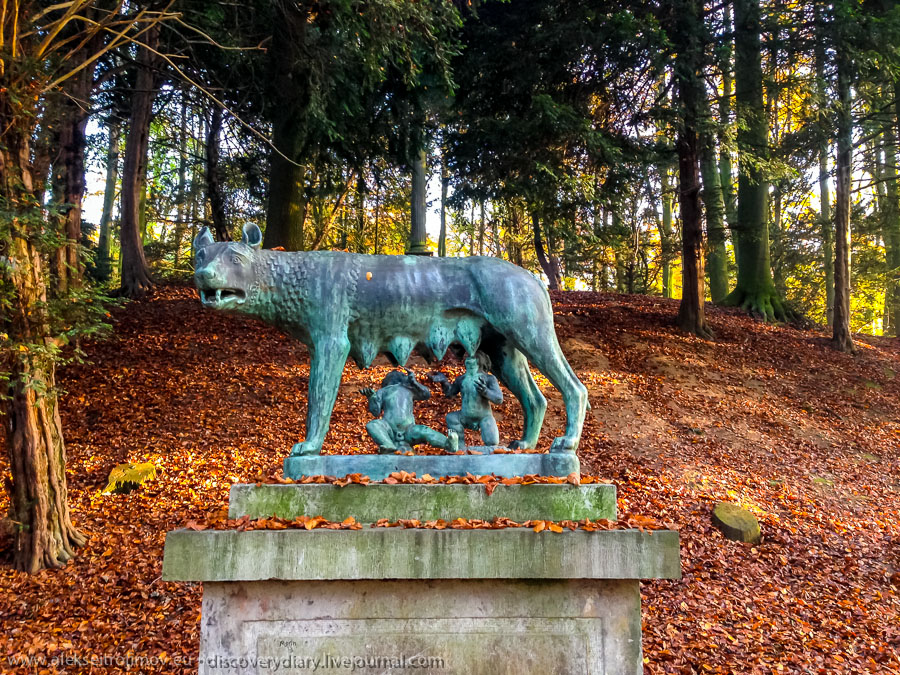 To finish off the Brussels report, here is a place I return to over and over when I am in Brussels. It’s Delirium – specifically its lower floor. It is the one place where virtually any Belgian beer can be tasted – and there are thousands of them. I’ve got a list of the best beers which won various competitions and I cross them off systematically. This time it was Oude Geuze Boon by Brouwerij Boon in Halle and Affligem Tripel. A must in Brussels. 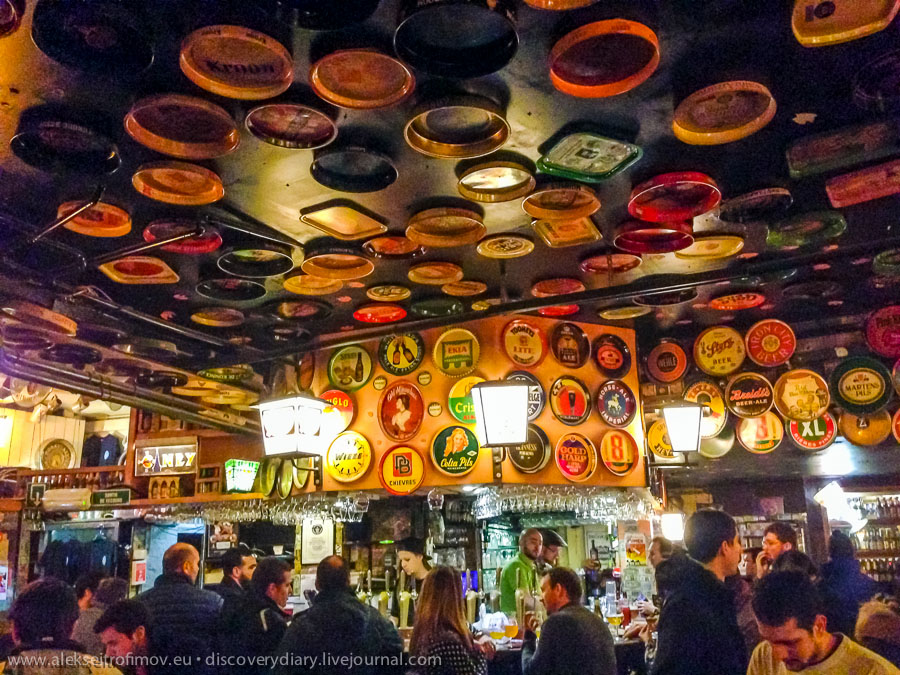