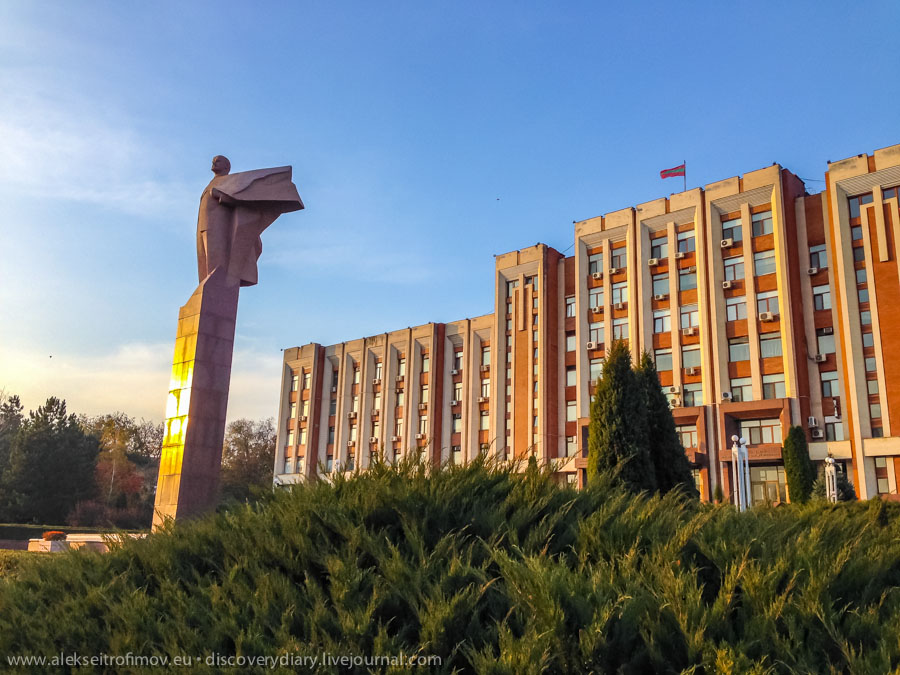 Tiraspol is unusual in the sense that it looks a lot more like a capital than does Chișinău. It’s very small and yet in the Stalin era its centre was built up as if it was meant to play a substantially more important role than a centre of a small autonomous republic. To remind you, between the two World Wars most of Moldova with the exception of Transnistria was incorporated into Romania; only after the Molotov-Ribbentropp pact did the Soviet Union take back Moldova from Romania, thus restoring the territorial situation at the end of Russian Empire. I think Tiraspol was meant to be the capital of the new Soviet Moldova – but for some reason later it was decided to keep Chișinău as the capital.

Lenin is still ready to take off on the square in front of the Transnistria’s presidential residence. 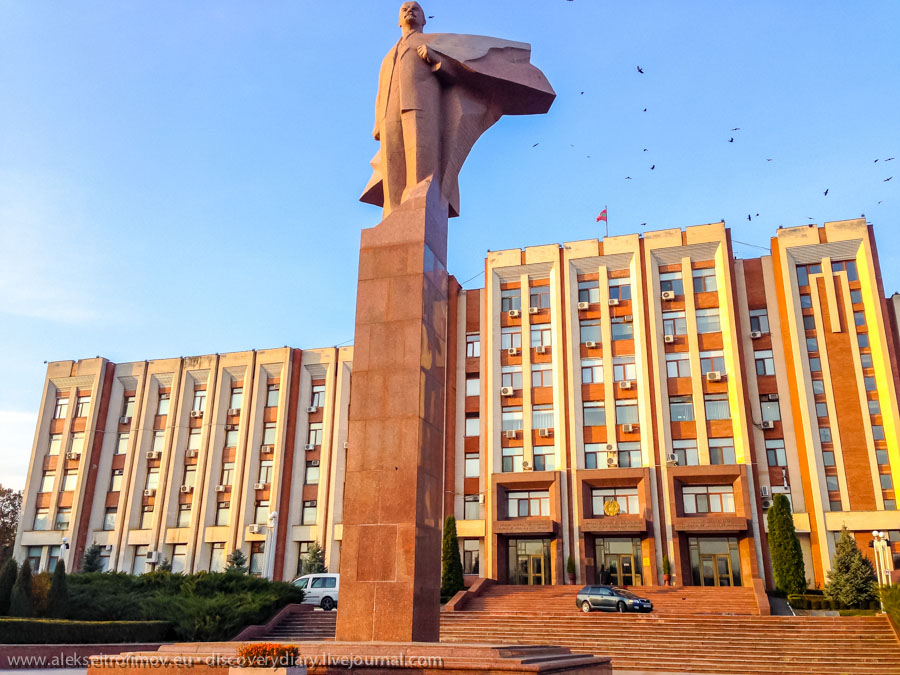 The main prospect of Tiraspol stands near empty. 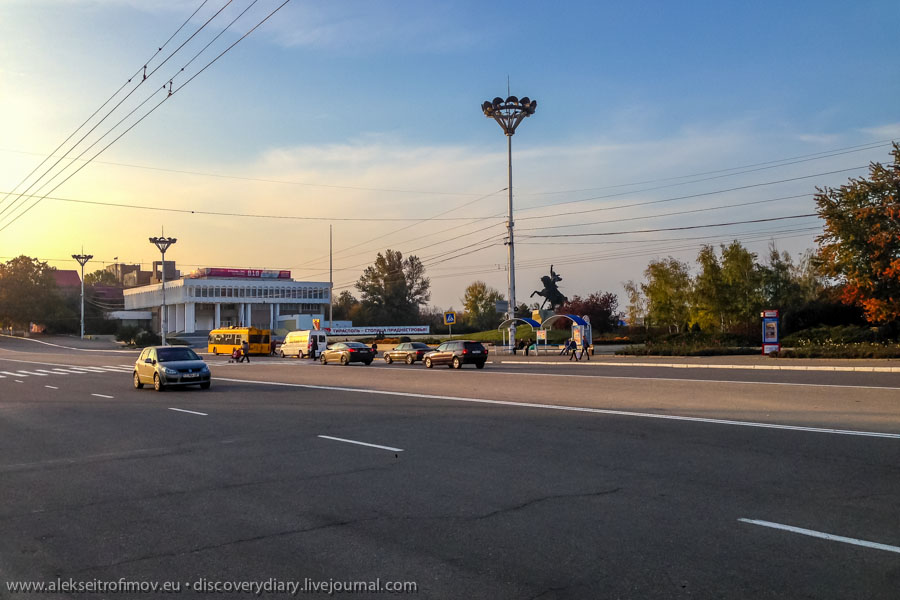 This is the main monument, devoted to Suvorov. Suvorov is an 18th century Russian military leader who is considered the key historical hero by Transnistria. His face is placed on all the banknotes of Transnistrian rouble. Such reverence is exlained by the fact that Suvorov’s troops conquered this territory from the Ottoman Empire. I think it’s certainly a better historical reference than the ubiquitous tired boring Lenin. 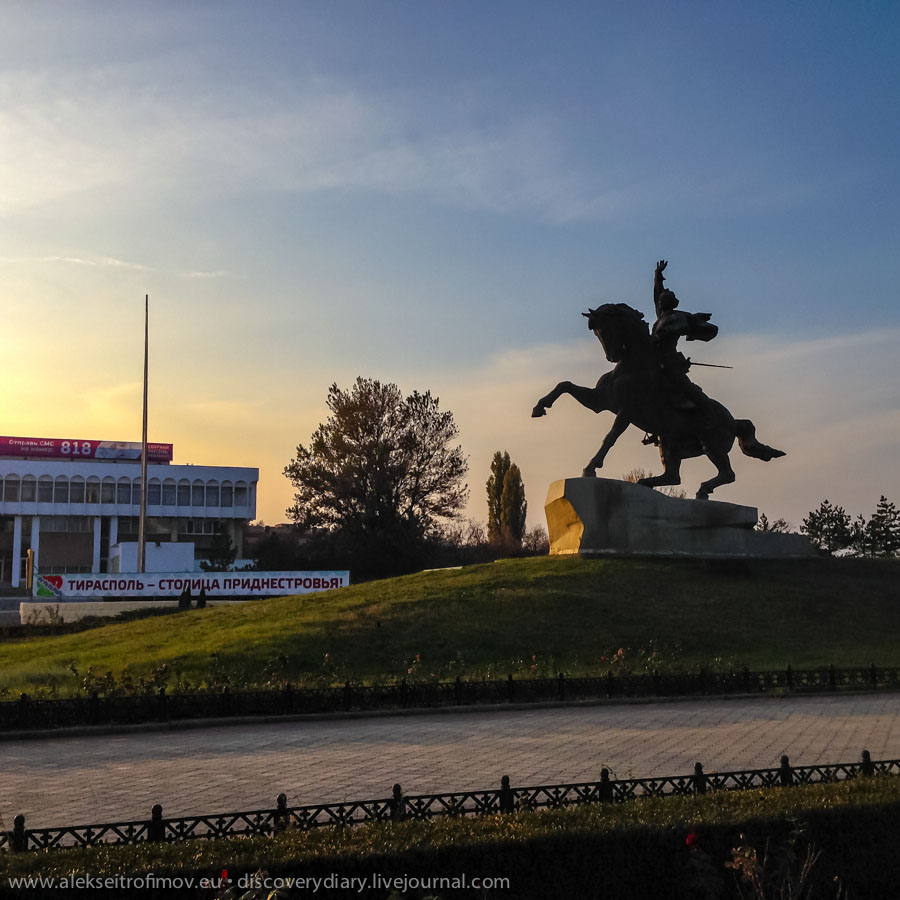 The spirit of Tiraspol. 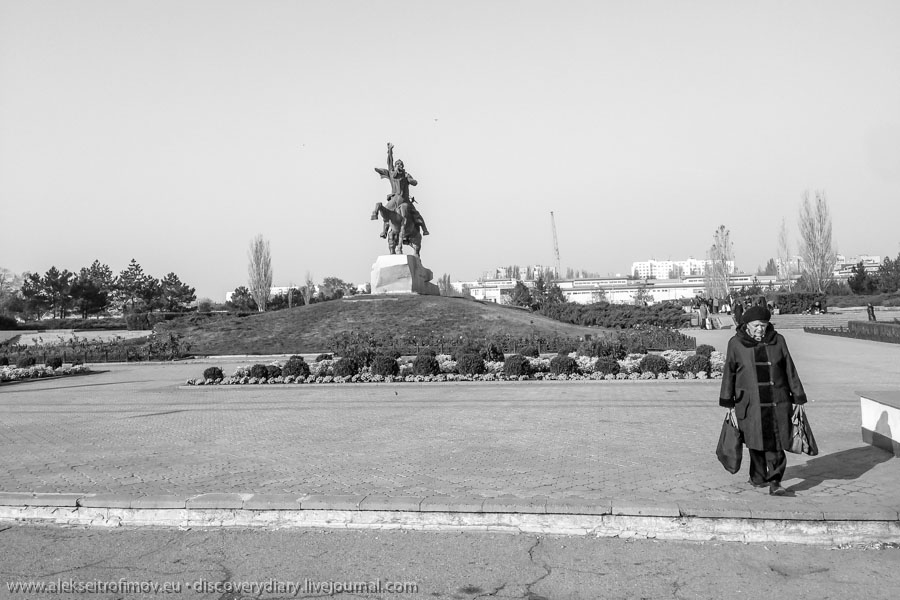 In front of Suvorov stands the Tank, a memorial to the independence fighters who fought Moldova in the beginning of 1990s. 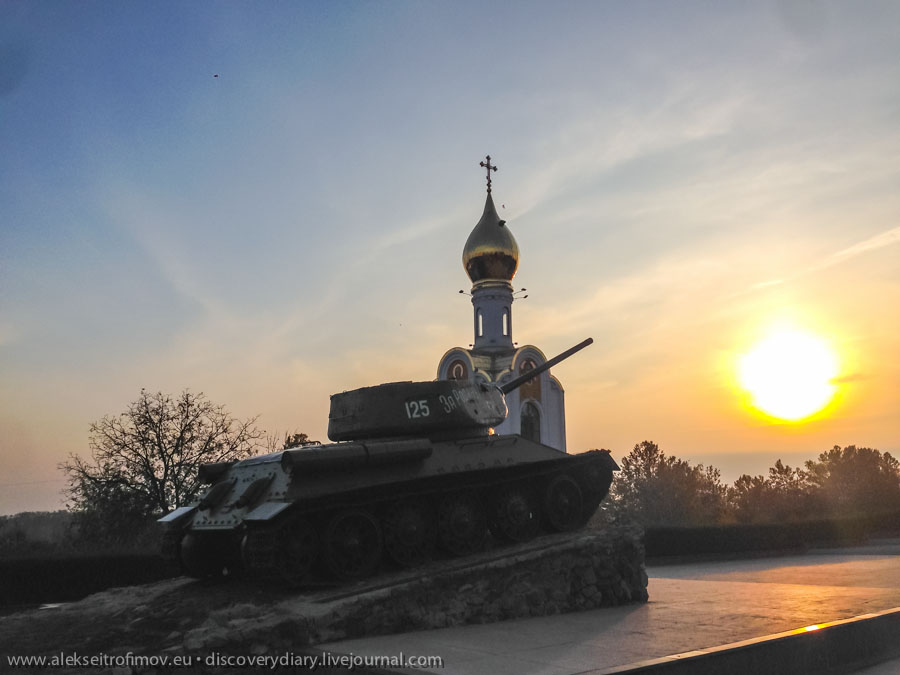 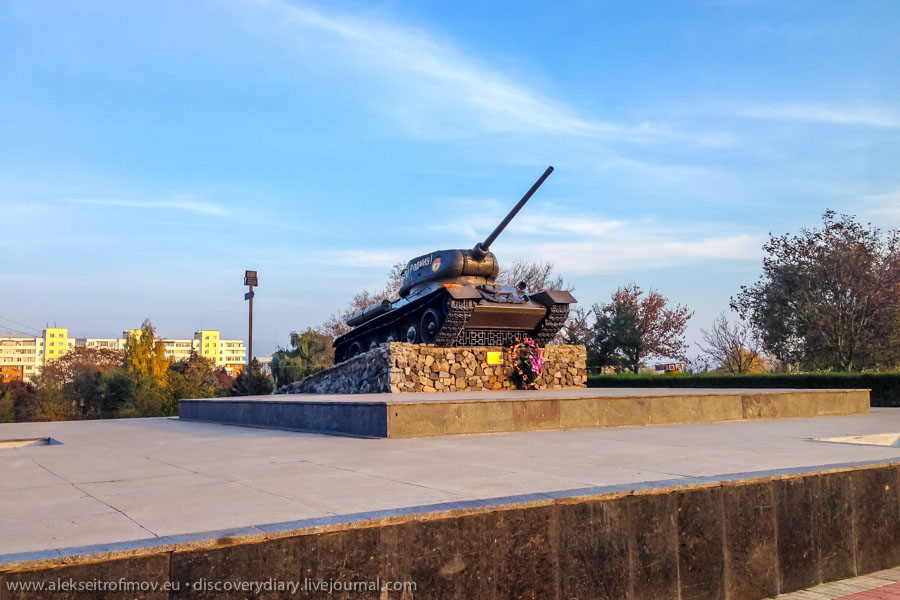 This building jumped into my eyes on the main prospect. It’s the only embassy in Transnistria – and a joint one at that. The republics of Abkhazia and South Ossetia are represented here. As I was excitedly photographing the door of the embassy, the passers by looked at me as if I were an alien. Well not only then. Still we were not the only tourists here – with some surprise I read that there is even a youth hostel here somewhere, kept by an American. 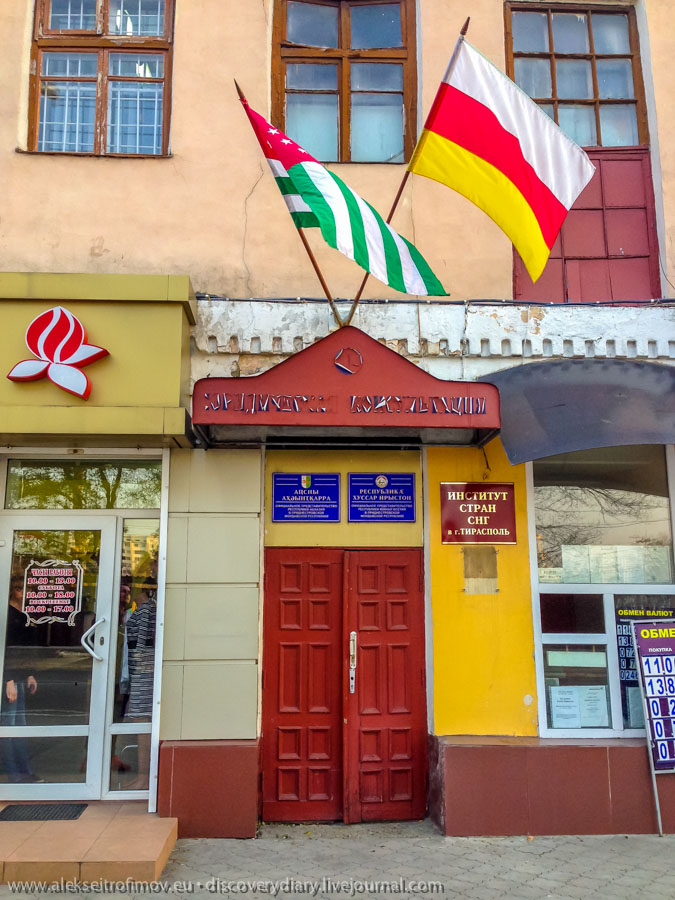 We opted to enjoy the local comforts and chose the hotel Aist (i.e. “Stork”) This is a photo of their price list – a most curious document! Special discounts are reserved for the locals, as well as for the friendly citizens of Abkhazia and South Ossetia! On the other hand the evil Baltic States and hateful Georgia pay the same as the West – here, we’ll hit you where it hurts most! So we paid full rate. The central heating was not on in Tiraspol, consequently it was very cold in the room – despite there being an electric heater. So we had to sleep dressed and under many blankets. But overall Aist was ok. 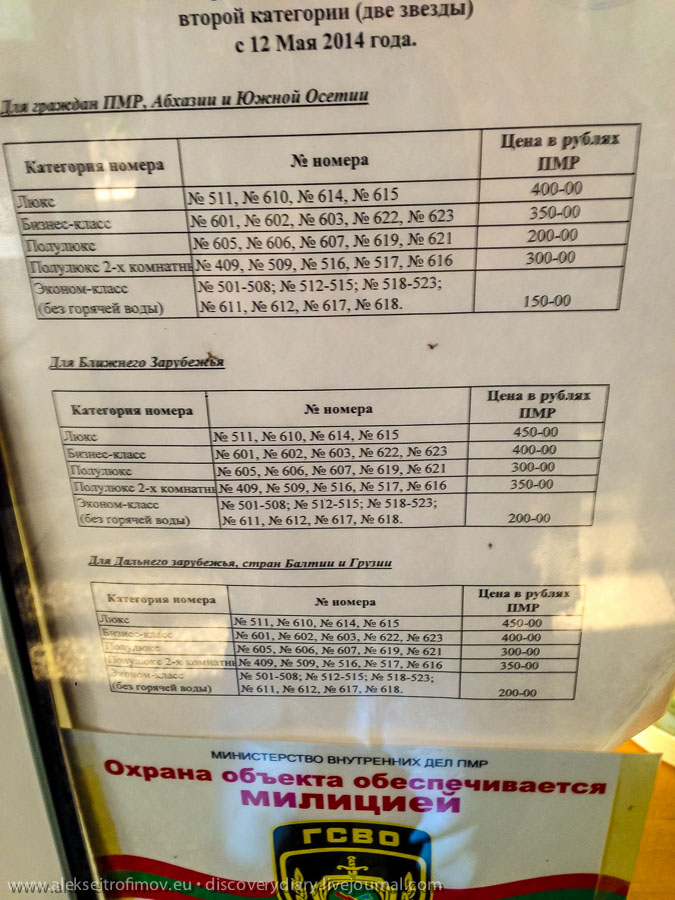 Actually first thing we did, even before going to the hotel, was to get a registration stamp at the local OVIR (i.e. Office of visa and registration – an institution well known throughout the post-Soviet space). As we arrived in the OVIR, the guard immediately informed us that we cannot be registered if we have no hotel bill. As we turned away, he nevertheless insisted that we check with the officials inside. “Go, ask!” he said. So we did enter this house of Kafka. As I approached a tiny window and explained our situation, the girl with surprising friendliness said “Oh I can’t let you go back and forth in this cold!” And with that stamps were affected onto our coupons. If only bureaucrats everywhere were this friendly!

Our walk around Tiraspol. Peculiar cityscapes: 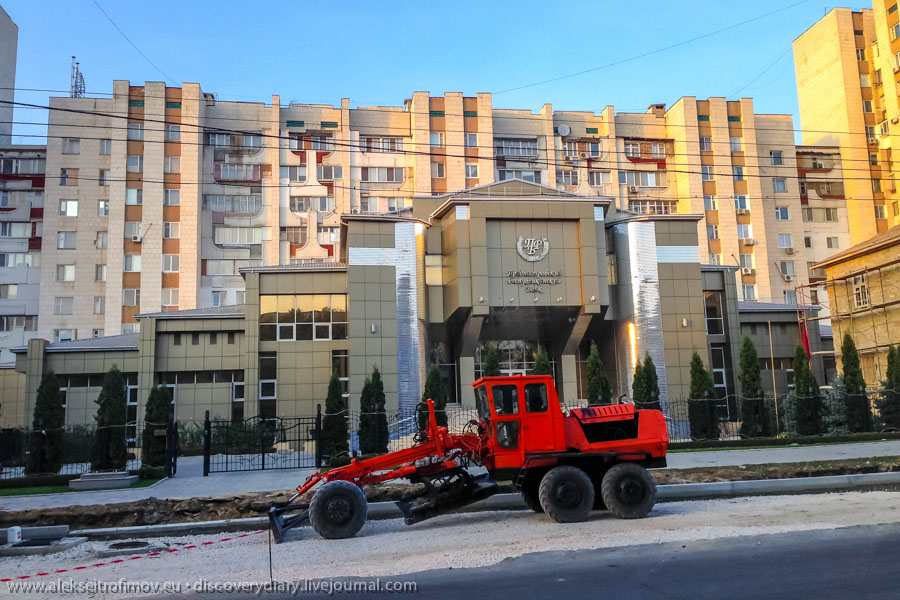 The House of the Soviets – it feels like nothing at all has changes from the Soviet times. Now it houses the local legislature. 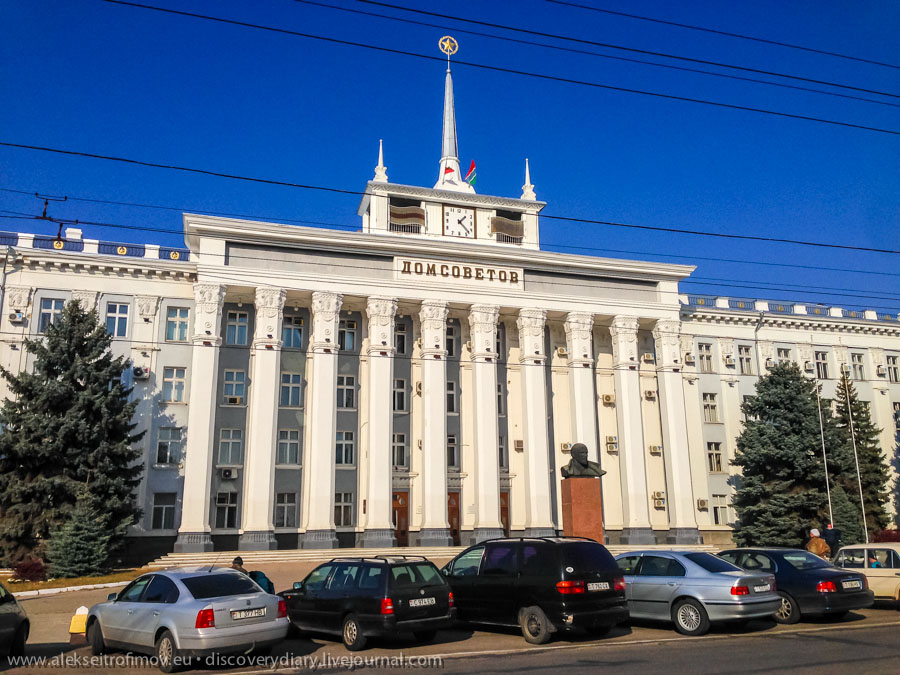 One more positive personnage – Gagarin. My proposal is to rename all the Lenin streets in Russia after either Gagarin or Suvorov. Why not Chaikovsky? Or Mendeleev, Akhmatova, Pushkin, Faina Ranevskaya, Kutuzov, Dostoyevski. They have people. But why is Lenin everywhere??? 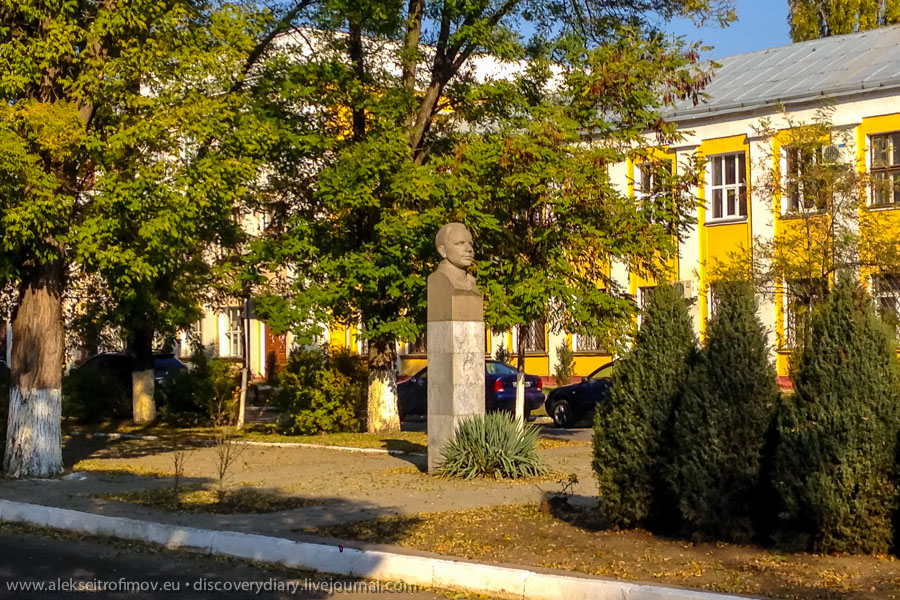 Another interesting aspect of Transnistrian life is that for a long time they were completely cut off from the international banking system. This meant that cards issued by VISA or Mastercard were of no use here. (We did notice some ATMs with Mastercard logo, so perhaps the isolation is no longer that complete.) Therefore Transnistria introduced its own banking card system, called Raduga (i.e. Rainbow). In Tiraspol you see Raduga logos everywhere. But really it feels like a toy economy with toy cards and toy money recognised by nobody. Proud ads on the main prospect declare: Raduga has reached 200 000 users! Pay attention, Mastercard! 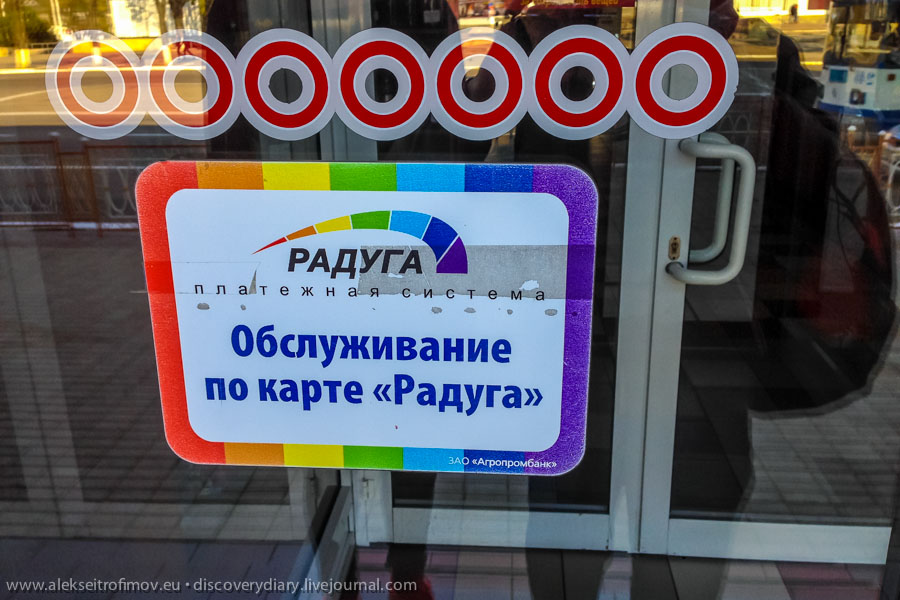 A truly shocking element of Transnistrian reality was found in a trolley bus we took from Tiraspol to Bendery, Transnistria’s second town. The distance between the two is only about 5 km, and very conveniently a trolley line connects them. As we were standing in the trolley among the crowd of Russian grannies and desperately shouting schoolgirls, we noticed with disbelief wifi logo. I switched on my phone and the wifi really worked! Please, join the network “trolley bus 253”. Wonderland? 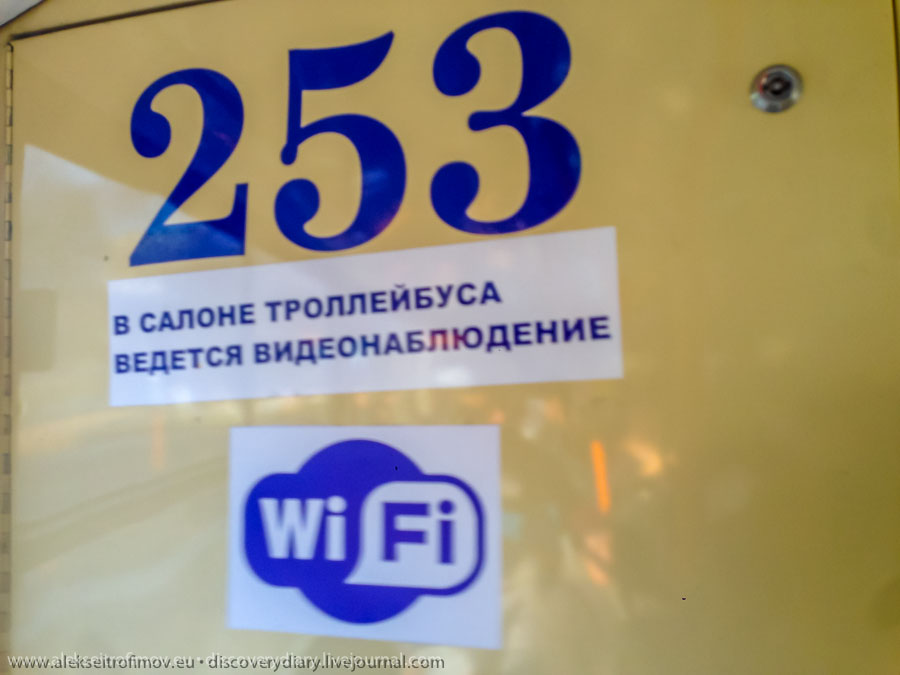 And some photos from Bendery. It has a very different atmosphere compared to Tiraspol, more lively, less official. This abandoned fun park was the first to jump into my lens. 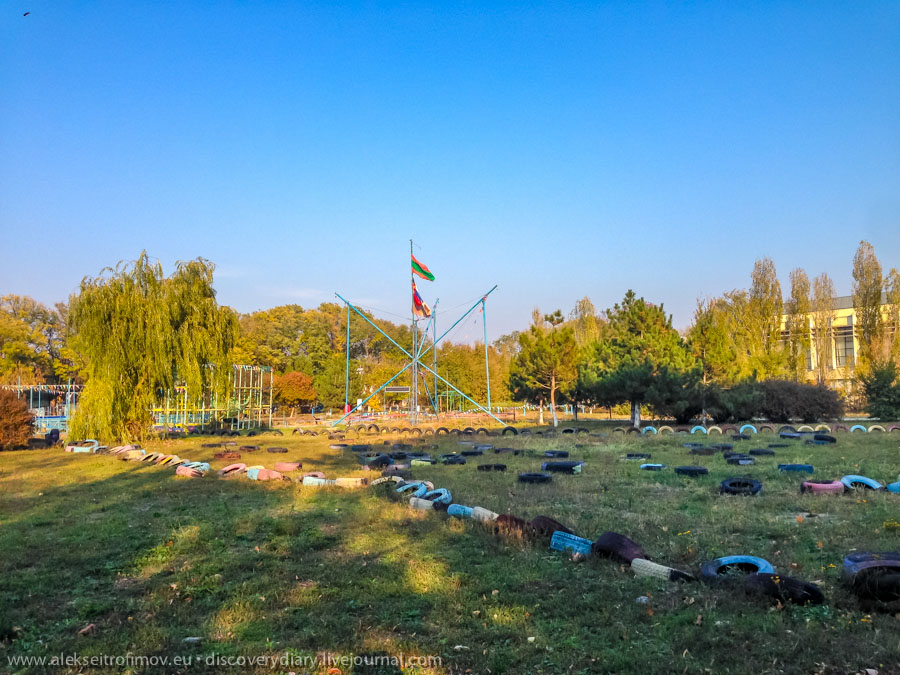 We also visited the memorial complex in Bendery devoted to the independence struggle against Moldova. 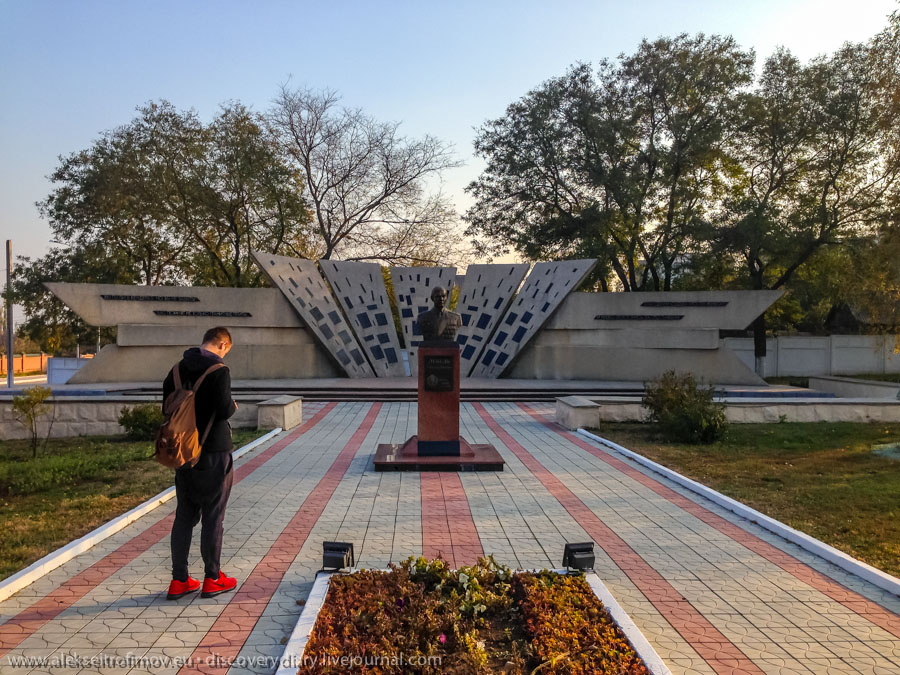 In the centre is the Russian general Lebed who commanded the Russian troops helping the fighters. General Lebed went on to play a significant role in the 1996 Russian presidential election. Lebed finished third after Yeltsin and the Communist Zyuganov. He finally declared his support for Yeltsin, which helped Yeltsin beat Zyuganov in the second round. I have a hard time imagining what would have been the consequences of a Zyuganov win. Anyway, Lebed went on to become a regional governor and died in a helicopter crash in 2002. 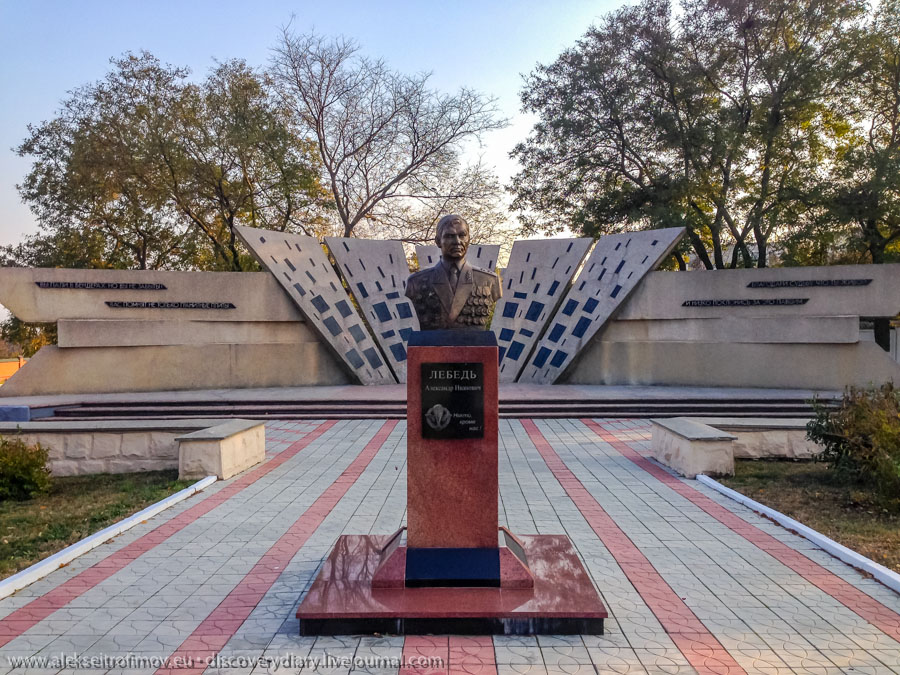 The compulsory Tank as well as the eternal flame. Actually it’s an APC, but Lonely Planet insist on “Tank”. 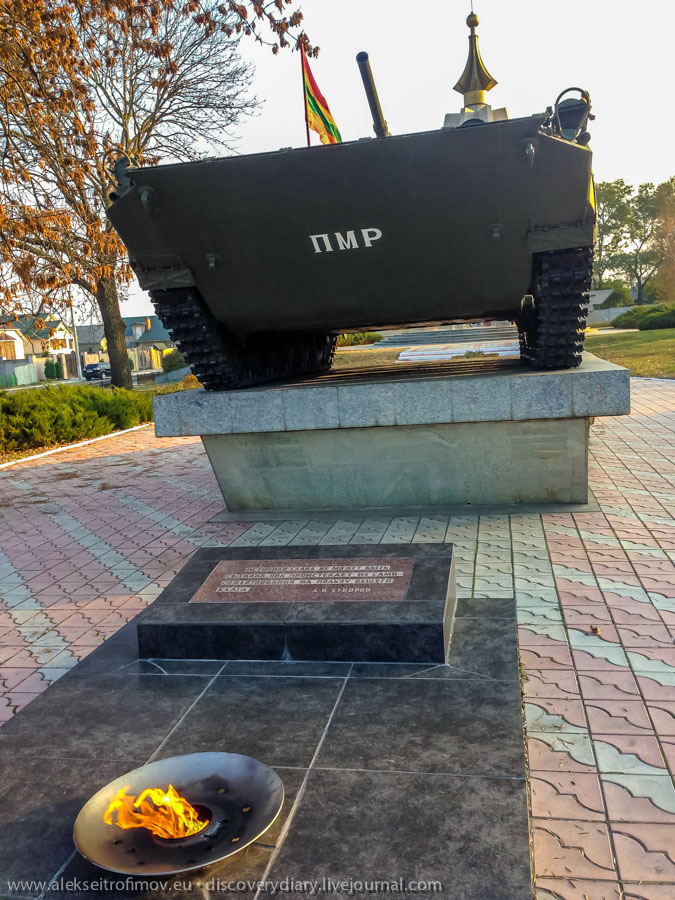 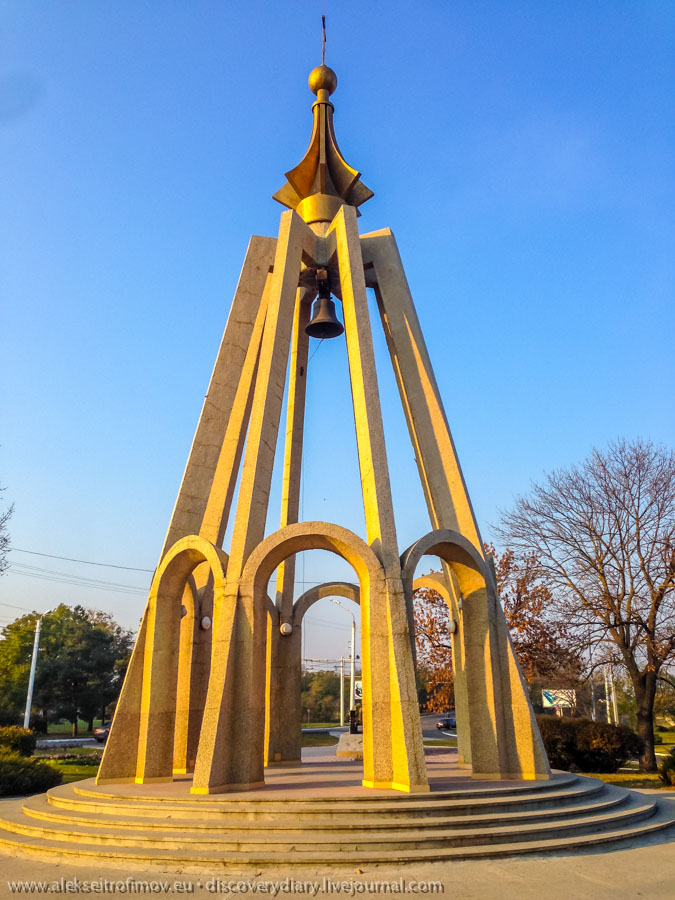 It was surprisingly easy to return to Chisinau from Bendery. At the bus station we could even pay for the ticket with a mix of Transnistrian roubles and Moldovan lei – as you realise, we had to get rid of the roubles as no country recognises them. The border guard on our way back just took our coupons without any question. Goodbye, Suvorov!

One thought on “Transnistria: guests of Suvorov”