My journey started exactly a month ago, on 5 July. Here are some observations on the everyday life on the road during this month.

Language
One of the loveliest aspects of life on the road in Latin America is of course the chance to practice Spanish.

In Yucatan and Guatemala to understand what people say was actually very easy – I guess the reason was that Spanish was not native for many of them. It’s a good way to get into the groove.

In Peru, especially in Lima, I realised in my first days that I had almost no idea what people were saying – so fast and so particular was their speech. But over time I got used to it. In Arequipa, Cusco and Puno things were a lot easier – a lot slower pace, a lot easier to understand and to speak. It is of course the best way to improve your skill, to immerse yourself in the language.

In Latin America they use a lot of words and expressions which are understandable, but to which I am not used: disculpe to say excuse me, con mucho gusto! to say you’re welcome, any young man is addressed as jóven, generally any person at any moment is addressed to as amigo. It’s fun and it makes you feel like you’ve touched a living language.

Money matters
Major mixing of banknotes and coins in my purse: euros, dollars, quetzals, nuevos soles, pesos, bolivianos, laris, and even some Estonian sents as a memento… 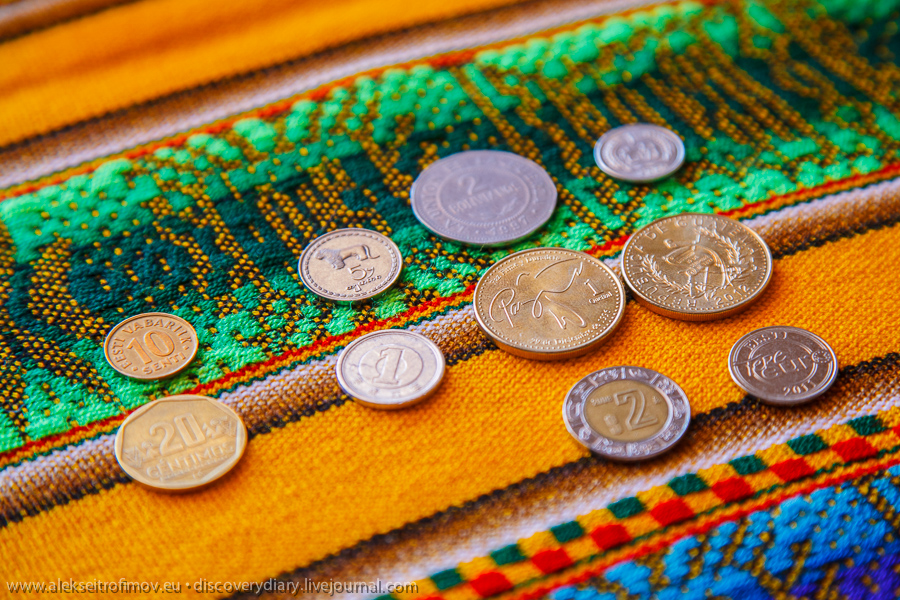 I brought some dollars with me, but carrying a huge amount of money on your person is unnerving. Therefore I exchanged most of them and spent them first. From then on, I withdraw money using credit cards. Of course, that is not a cheap pleasure – basically every withdrawal costs about 6 euros. In Peru the maximum amount you can withdraw at once is 700 soles, i.e. about 190 euros, so the withdrawal adds about 4% to all costs. I don’t see any way around it, except for paying directly with a credit card – and run the risk of it being illegally copied.

I must say that the dollar goes quite far in Latin America. Peru is more expensive than Guatemala, but still you get little gems for a price that would seem ridiculous in Europe. In Arequipa for 30 dollars I was staying in a hotel in a house of the second president of Peru, a protected historical monument featuring a lovely patio and top notch rooms. 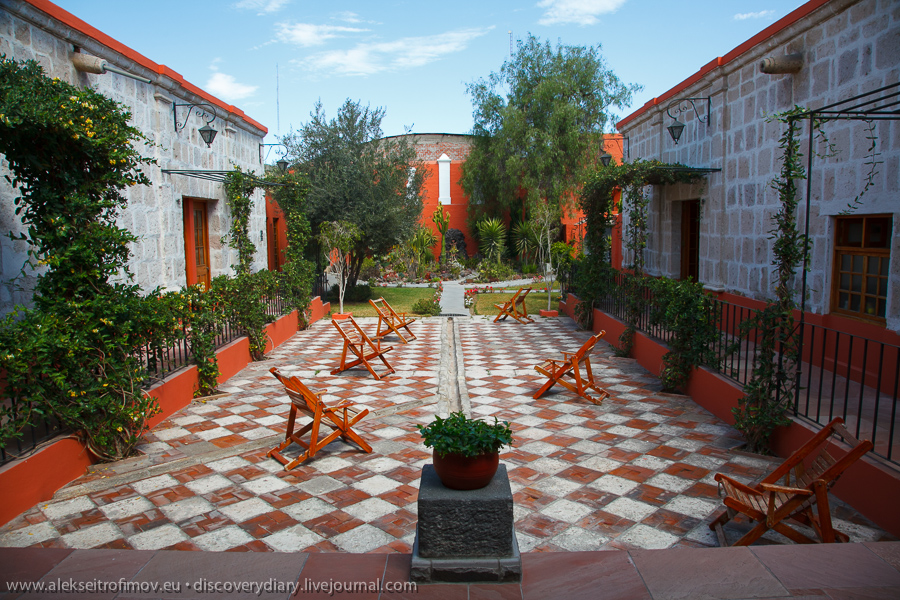 You can eat very well for 1 or 2 dollars, and dine at the town’s top restaurant for 10 or 15. The only thing where there is no letdown is airfare. The flight from Guatemala City to Lima so far was the biggest expense of my trip, it cost twice more than the admittedly discounted transatlantic flight that I bought in Brussels. Otherwise I’ve moved with night buses, which are way cheaper.

Night buses are a separate story. These act here in many ways like airplanes. You have to arrive 1 hour before departure for check in (!). Then you submit your luggage in a separate counter and get a receipt. On the bus you get a dinner and even a breakfast, if the journey is long enough. A stewardess serves hot drinks. Buses have wifi and chargers for electric appliances. The bus seats in luxury buses can be cama or semi-cama, which means you can move them back almost 180 degrees and sleep pretty comfortably. More than that, you’ve got screens built in into the seat in front of you. In this way quite unexpectedly I watched Django Unchained and Life of Pi.

Guidebooks
I think the moment Lonely Planet put out the pdf files of its books for sale on its website was a true breakthrough. I don’t know how other guidebooks are making money these days.

For a trip like mine, there is no way of taking a guidebook for every country in my luggage. I abhorred the idea of buying a generic “South America on a shoestring” type of book, as for me it was synonymous with admitting I would only be very superficial in this trip. To buy the guidebooks on the spot also doesn’t quite work – the local ask two or three times the actual price, so a guidebook price gets close to a price of a night in a hotel. So the obvious solution is to buy the pdf versions of guidebooks and then print out the select pages. They are of great help.

This method also has an unintended advantage of not having to carry a book around and being able to slip a small piece of paper in and out of your pocket when needed, avoiding the look of a lost tourist.

Music
My best friend on this trip is called iPod.

It is truly invaluable when travelling. On long bus trips and in loud restaurants and even in hotels it allows you to block out the exhausting noise. On solitary walks it creates a mood – and I don’t know a more potent instrument than music to lift your spirits up. Baroque music is great to make you feel happy – Handel, Lully, Vivaldi, Albinoni, Corelli, Camprà, Bononcini, Couperin, it’s all good! I also listen to a lot of lounge music – Café del Mar, Hotel Costes, St Germain des Pres and so on. But my secret weapon, to be used with caution, is the Swedish ambient group Vibrasphere. Their music seriously makes me high.

Well, one shouldn’t forget about the earplugs either. I guess I would get no sleep without those.

Laundry
No problem at all in Latin America – many laundry houses on central streets will wash all type of clothes in 3 hours for a pittance.

Eventualities
So far the one unpleasant thing that happened to me was that my iPhone charger somehow disappeared when leaving Lima. The hypotheses exist as to what has happened: first says that I forgot it in my hotel (although the hotel wouldn’t admit it), second, that it was stolen from the one pocket of my bag which cannot be closed with a lock during an overnight bus ride to Arequipa.

Losing a charger turned out to be a real brainteaser – there is no place in Peru, possibly with the exception of Lima, where this charger can be bought! And Apple doesn’t ship overseas from the US. And to ship from Europe, even if that could be arranged, would take many weeks. So far (i.e. about two weeks later) I haven’t found a solution, so I am without a functioning mobile phone. Which is not so bad actually. Still, it makes you painfully realise how locked you are into your technology. One little cable missing renders your super expensive gear totally useless. (Well, it’s particularly relevant for us Apple addicts.)

Firstly, it is certain that the locals know how to cook it. The dishes we would consider trivial may be quite exotic for the cooks abroad. I’ve seen a few inedible wiener schnitzels, and anyway pizza is best in Italy. Therefore – local dishes all the way!

Of course, it also gives the trip a local feel. And helps you discover new stuff and avoid routine.

On this trip, I’ve had only one poisoning so far, and it was not the food which was to blame. Old friend alcohol! 🙂

I will write a separate post about Peruvian food, which is fantastic and considered the best in the Americas.

Altitude sickness
To be honest, I didn’t even recognise it at first. The first couple of days in Arequipa I felt somehow depressed, tired and irritable. At first I thought that the notorious mal de voyage had arrived – a bit early though, and it was kind of strange as I was actually feeling quite excited about the upcoming detours. And then it hit me – ha! altitude sickness! Arequipa is not that high though, about 2300 metres. But wikipedia says that indeed at this altitude the first symptoms can already start. And so it was.

Well, I took to drinking lots of water and especially coca tea, ate less and slept more, and in the Colca Canyon the altitude sickness as such no longer bothered me. The next stage was Cusco, at 3300 metres. No sickness as such, but a very sharp perception of your physical limitations – any staircase got me out of breath and my heart racing. Finally, Lake Titicaca at 3800 metres was so far the toughest. Only here did I feel a sudden lack of oxygen at a random moment. It’s a strange sensation when you feel almost suffocating – so you start breathing real fast, and even feel a tad of panic. Although during the Colca Canyon trip we crossed some points at a much higher altitude (4500 metres if memory serves), 3800 metres will remain the highest altitude where I would stay for a number of days, as La Paz is about the same and afterwards it’s normally all lower.

I am genuinely looking forward to actually descending and feeling the sportsman’s lungs, which some people describe: the unusual freedom and ease of breath and movement which comes after exercising your body (primarily lungs) at an altitude. Let’s see if it’s true or a fairytale!

People
That’s perhaps one of the most interesting aspects of life on the road – the people you meet.

And you cannot help but meet them.

I feel like I’ve met so many interesting people already that I couldn’t even list them all. From all possible walks of life and nationalities and genders and ages.