As the English expanded their hold in New Zealand from the North, their first capital logically was located at the Northern end – in Auckland. Auckland though was far removed from the South island. At the height of the 19th century gold rush it was the South island that was the prized possession and at some point it played with the idea of becoming a separate British colony. To nip this in the bud, it was decided to move the capital to the geographical centre of the country – and in 1865 Wellington was chosen to bear this responsibility. Wellington is infamous for its bad weather, especially the gusting winds. When I was there however the weather was very pleasant – as pretty much everywhere on my trip around NZ. Wellington is also famous for its quality of life – in various ratings it is systematically rated in the top group.

I loved visiting the Houses of Parliament in Wellington. As a matter of fact this complex houses both the legislative and the executive branches – the Parliament as well as the government. An organised tour of the premises starts on the hour many times a day. 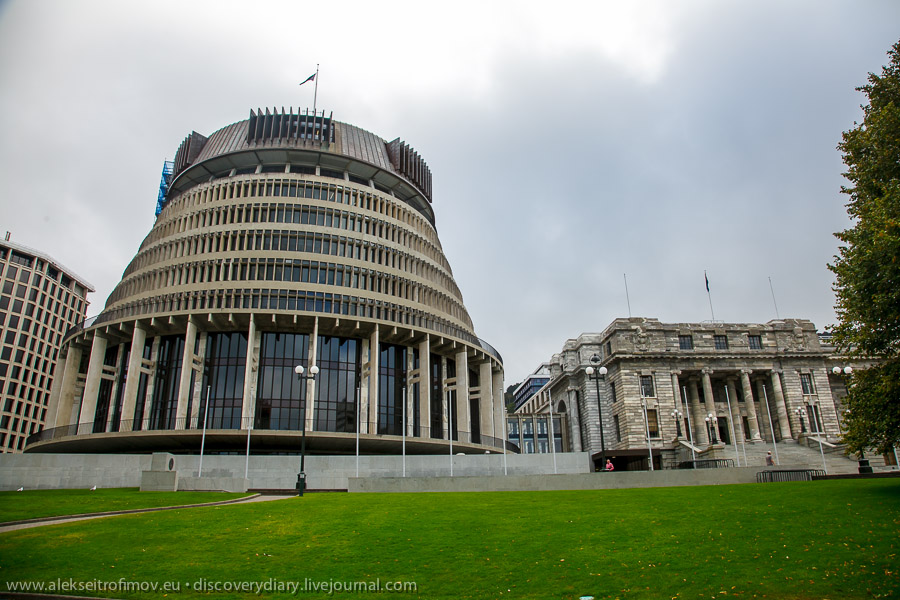 The tour commences with a quick visit to the Beehive, a symbol of Wellington. This building is today occupied by the government. The government meeting room as well as the Prime Minister’s office are located on the top floor. There is also a solemn banquet hall where all sorts of visiting dignitaries are feted. We visited this hall although for some reason no banquet in our honour. Photography is prohibited there, so much so that they confiscate even your mobile phone before you can enter. 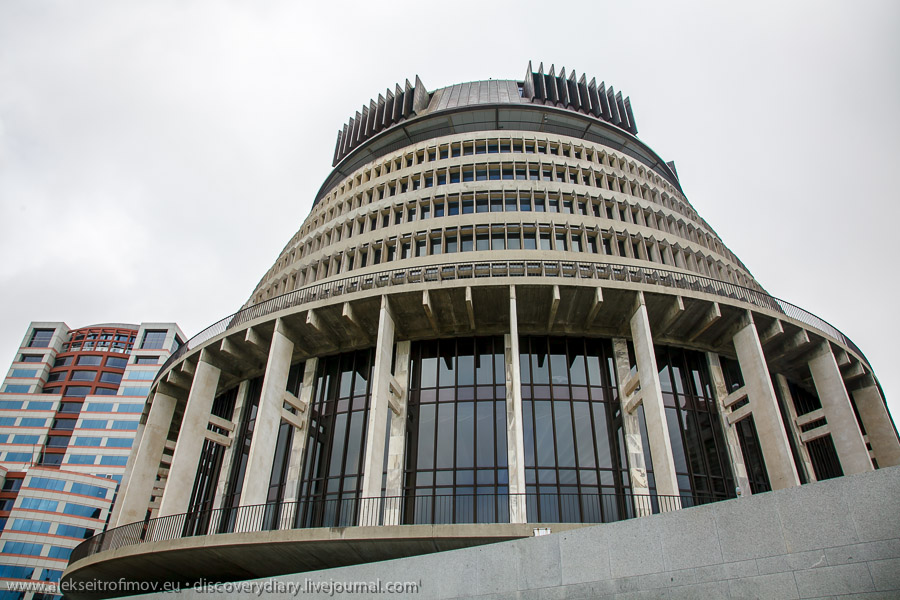 The tour moves on to the old part of the building, today occupied by the Parliament. The building itself is proudly unfinished. According to the initial project, it had to have two wings, but due to the World War One the money run out at one wing. The building keeps evolving, sometimes rather drastic changes are implemented. For example the various branches of government have moved around the building multiple times. 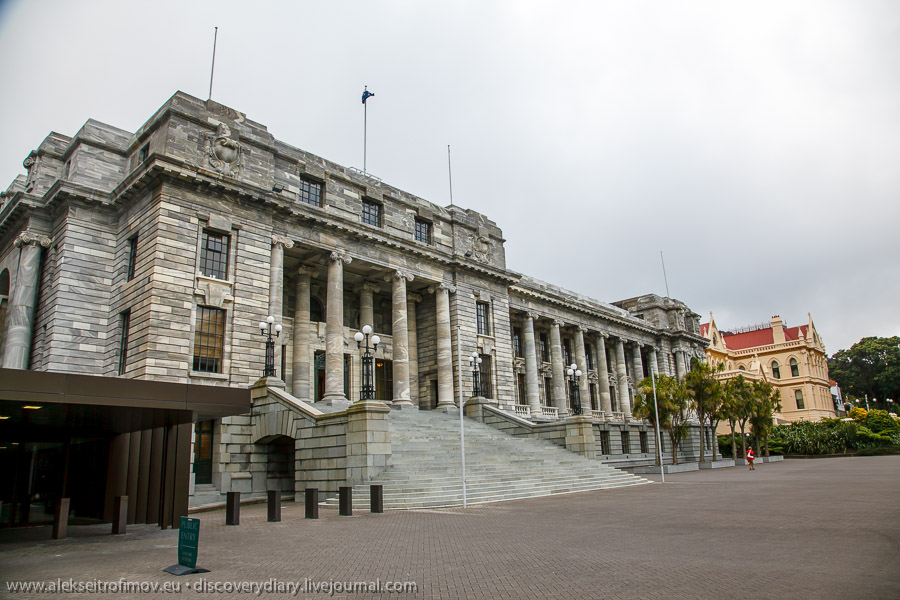 So it is a Parliament in evolution. Literally – as the functions of various rooms are changing. But in parallel to this physical evolution there is also an evolution of public consciousness that is taking place. Some of the milestones of this societal change:

+++ New Zealand is mad about rugby. In 1981 the South African rugby team embarked on a tour of New Zealand. The tour was met with mass protest against the apartheid. I was shocked to learn that at the time the Maori members of NZ rugby squad could not play in South Africa due to their race. During this tour of 1981 New Zealand was sharply divided into supporters and opponents of the South African policy. But it was a breakthrough moment in New Zealand’s history as it was the first time the issue became such a focus of public ttention and debate.

+++ In the mid-1980 a huge debate was centred on the decriminalisation of homosexual acts. Very heated debates took place on TV accompanied by demonstrations of supporters and opponents on the streets. Finally the law decriminalising homosexuality was passed in 1985. In 2013 New Zealand of course legalised gay marriage. One of the most touching scenes in the battle for equality took place in the Public Gallery of the Parliament. When the passage of the law was announced, the public and some legislators spontaneously broke out to sing a Maori love song, Pokarekare Ana.

+++ At the very moment I was travelling around NZ the Prime Minister declared his intention to change the flag of the country. The current flag is criticised for the fact that it is dominated by the British flag in top left hand corner, it is too similar to Australia’s flag and it is not specifically linked to New Zealand as the South Cross is basically seen all around the Southern hemisphere. On the other hand the NZ sports team have been long using another flag, black field with a silver fern. This symbol is actually omnipresent in New Zealand. The Prime Minister would like to adopt this flag as the new state symbol. The symbolism of this change runs deep – it demonstrates the coming of age of New Zealand, its acquisition of its own character quite different from mother England, and the conclusion of the postcolonial era.

The NZ Parliament has one chamber, but all laws are first considered in parliamentary committees, so called Select Committees. Every NZ resident by law enjoys the right to submit their view of a proposed law proposal to the Select Committee by post and can request to be heard by the Committee. The Committee is then obliged to consider all submissions and to hear all those who want to speak. I thought to myself that only a country of 4 million can afford such a system. Yet of course this triumph of direct democracy is quite impressive. The Select Committee meetings take place is a special room created pretty recently. It is called Maui Tikitiki a Taranga and its walls are decorated with huge specially carved Maori carved panels.

Another curiosity to see in the Parliament are two red thrones used by the Queen of New Zealand and her husband when she opens a session of the Parliament. Elizabeth II has done this four times.

I visited the Public Gallery which surrounds the Parliament’s chamber. At the time a debate was taking place on the floor. Although the laws were not first order of importance, the debate was surprisingly emotional. It seems that it is a feature of Westminster system which pits the government and the opposition one across the other physically and politically. The debate was about a law installing requirements for disclosure of information regarding the sources of party financing. The Labour party (opposition) accused the ruling right wing party of being connected to the wealthiest New Zealanders and hiding it (typical all over the world, come to think of it). When one side spoke, the other aggressively shouted over it. It is kind of shocking at first, but then you realise that this theater is an in-built feature of the system.

When the time came to vote, I was surprised to see that it was necessary for all MPs to be present – a representative of each fraction simply declared how many votes they have, the votes were counted and the result declared. The law adopted!

I was very excited to be in this centre of New Zealand’s power. I must say I love visiting governments and parliaments, I’ve been to quite a few Presidential palaces and Parliament houses all over the world. Well indeed for six years I worked in a governmental organisation too.

A monument next to the Parliament Houses. 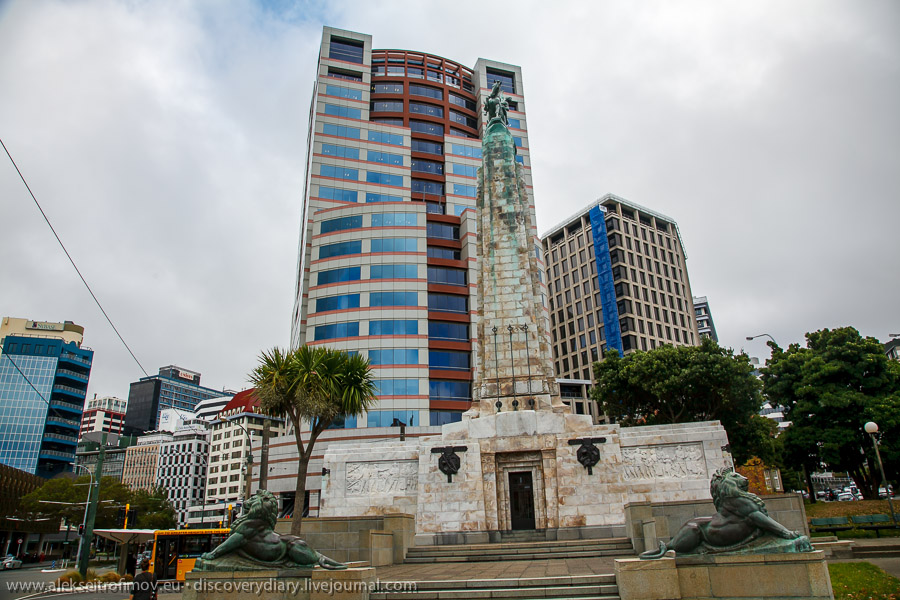 Wellington is not particularly rich in terms of things to see. Most Australian and New Zealand cities will list the Botanic Garden among their main landmarks, and each Garden is better than the last. The one in Wellington is very impressive, it occupies the hills overlooking the city. You get there by a cable car: 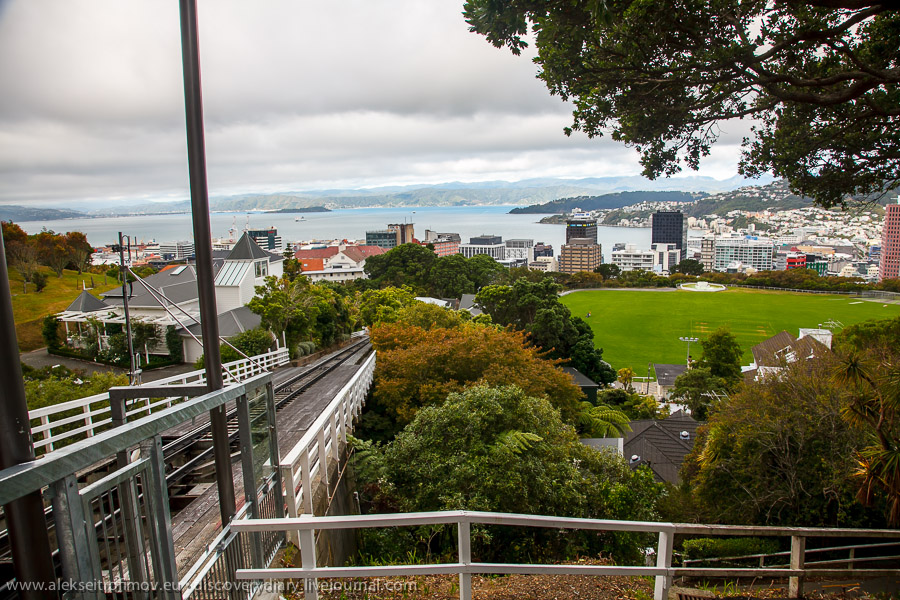 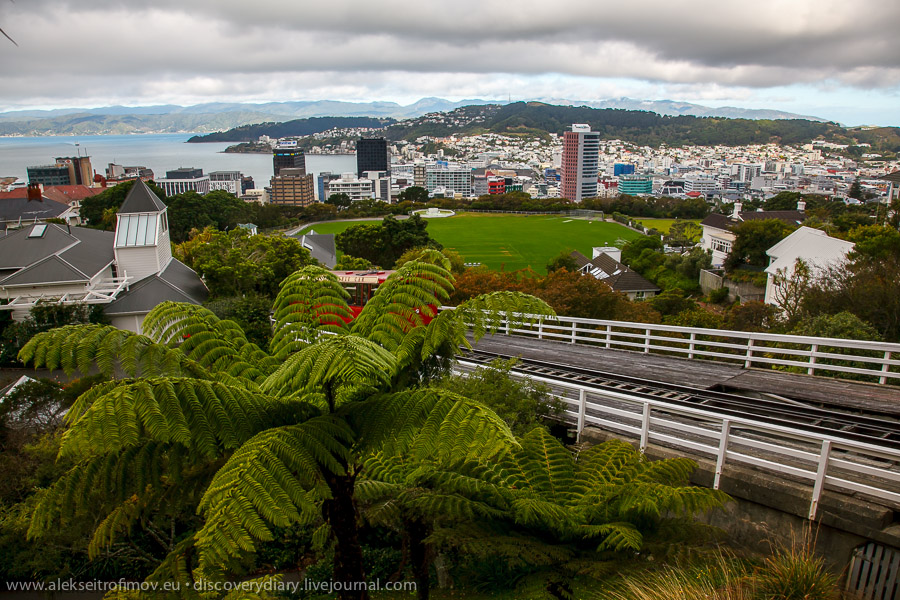 The garden is very smartly planned and surprises you with new exotic plants and unexpected panoramas all the time. 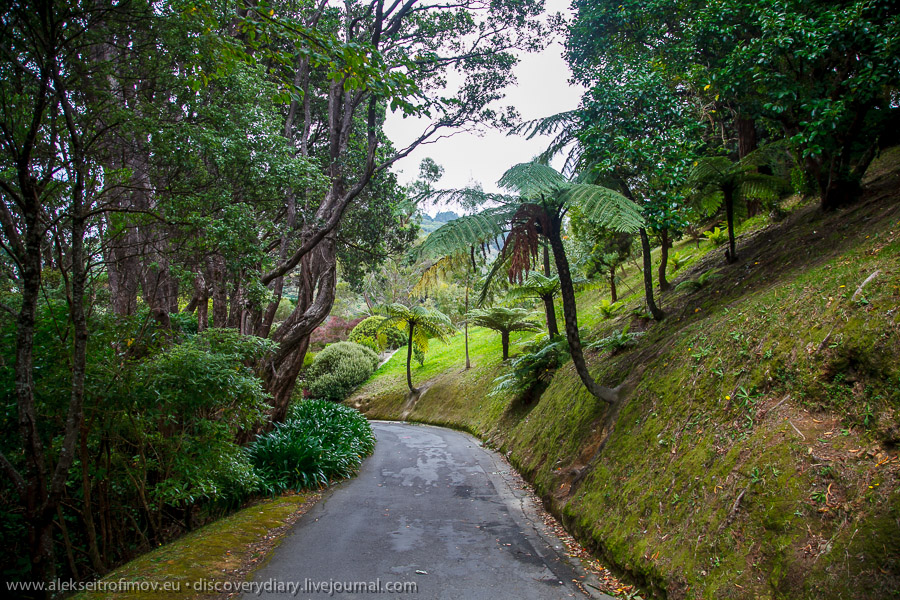 I had no time to wander around it all day, so I only took the main suggested route with a couple of detours. You can easily spend there many hours though – that is the purpose of course. 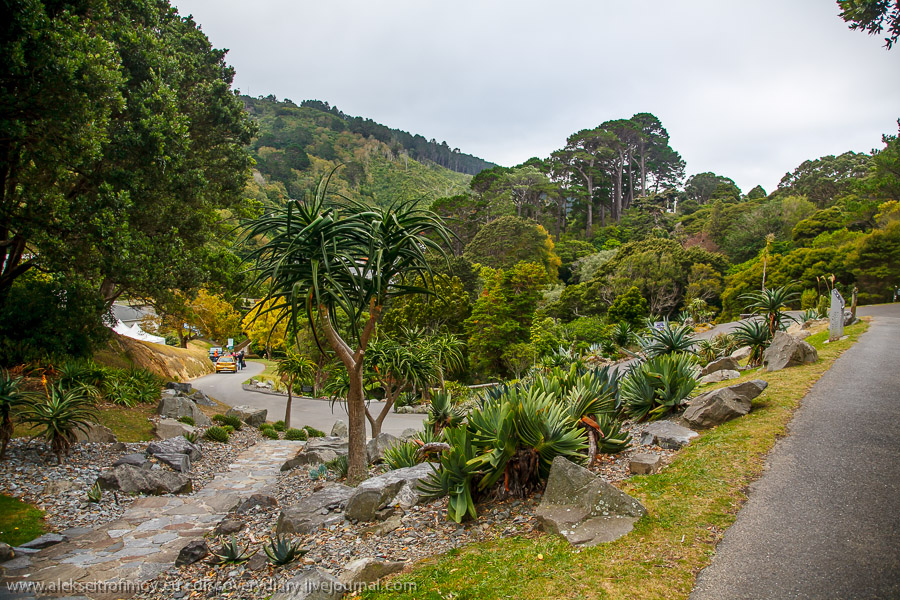 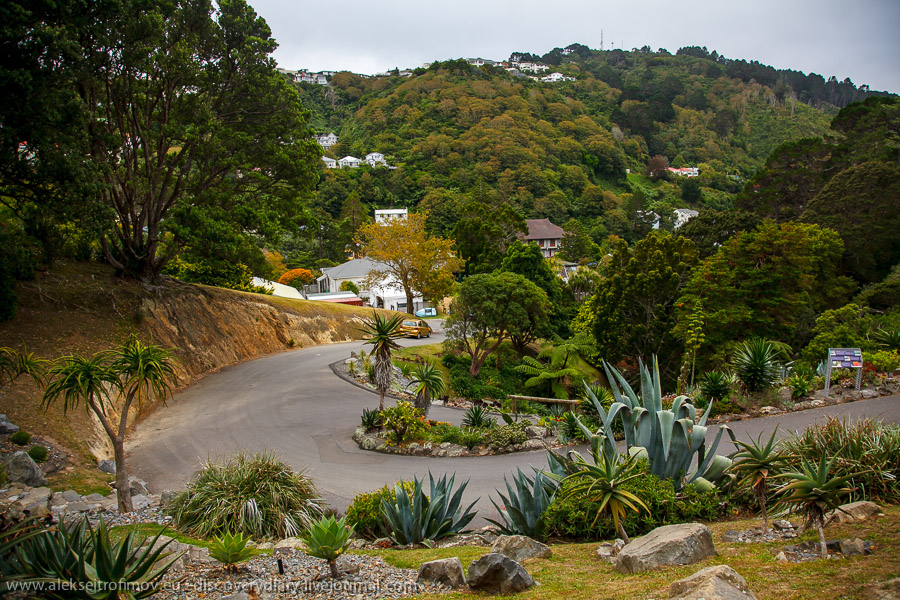 The main entrance of the garden – from the Western side, away from the city. 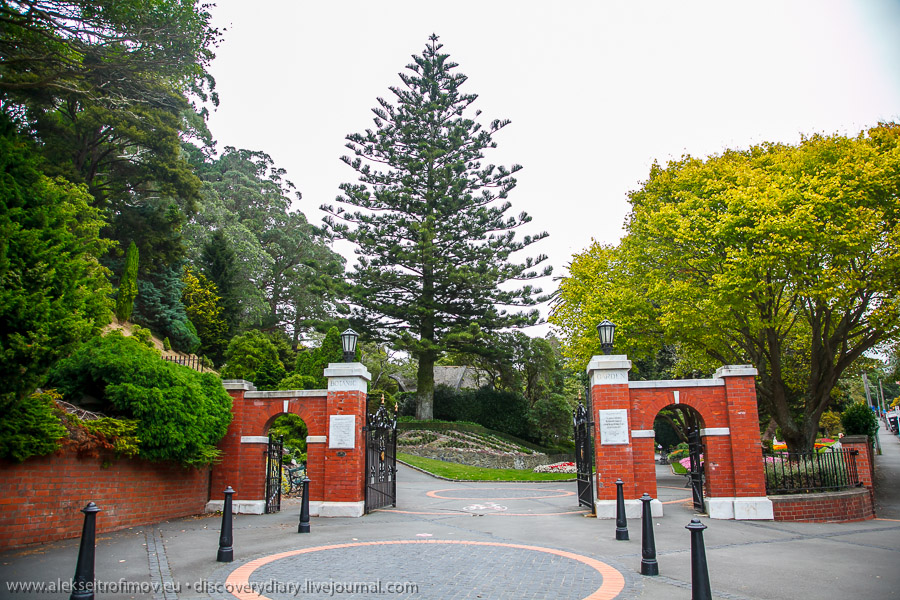 A pond by the entrance: 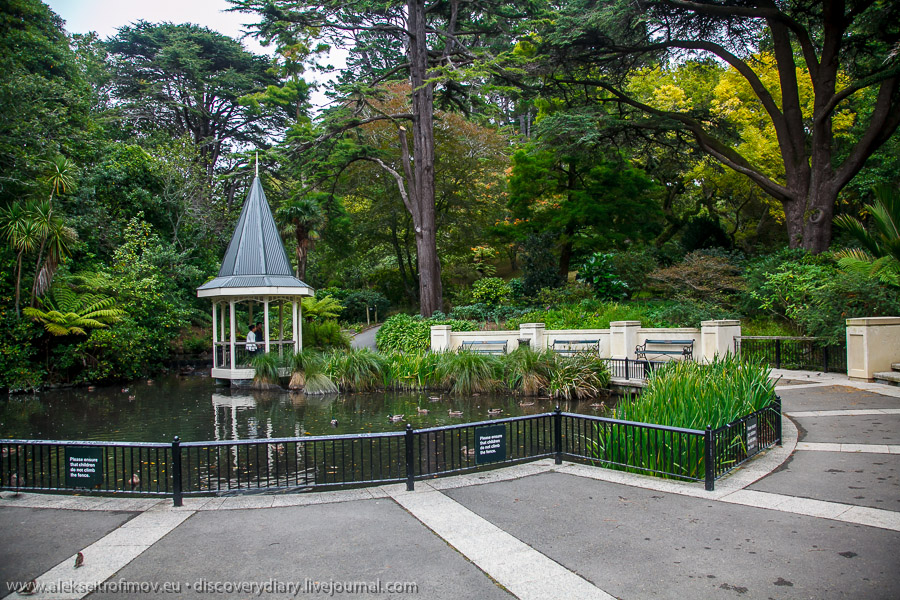 The view of the North of Wellington from the garden: 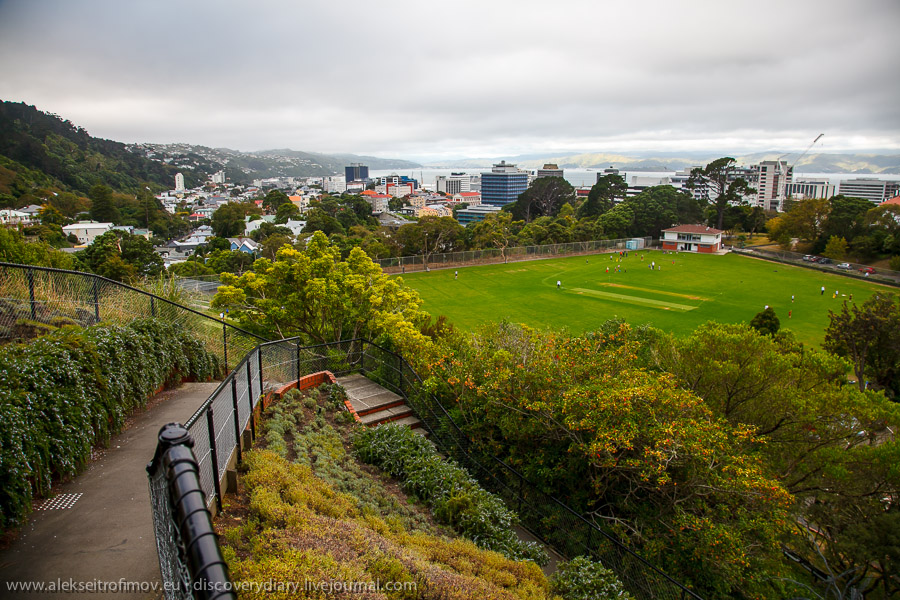 One of the main streets, Koba street, where my hotel happened to be. The girl in red is singing a capella. This alternative laid back spirit permeates the centre of Wellington. Very pleasant place. 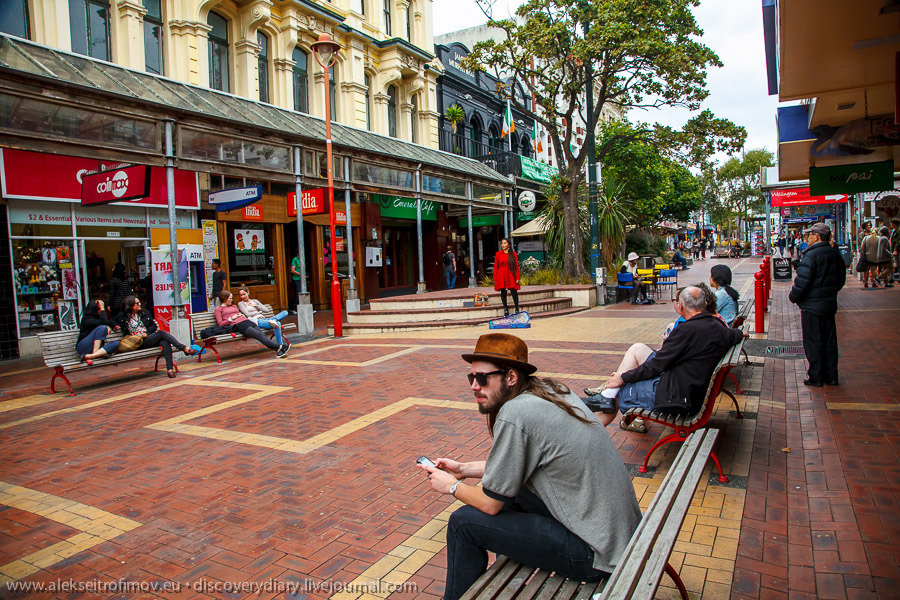 The next day I climbed Mount Victoria, which dominates the city from South East: 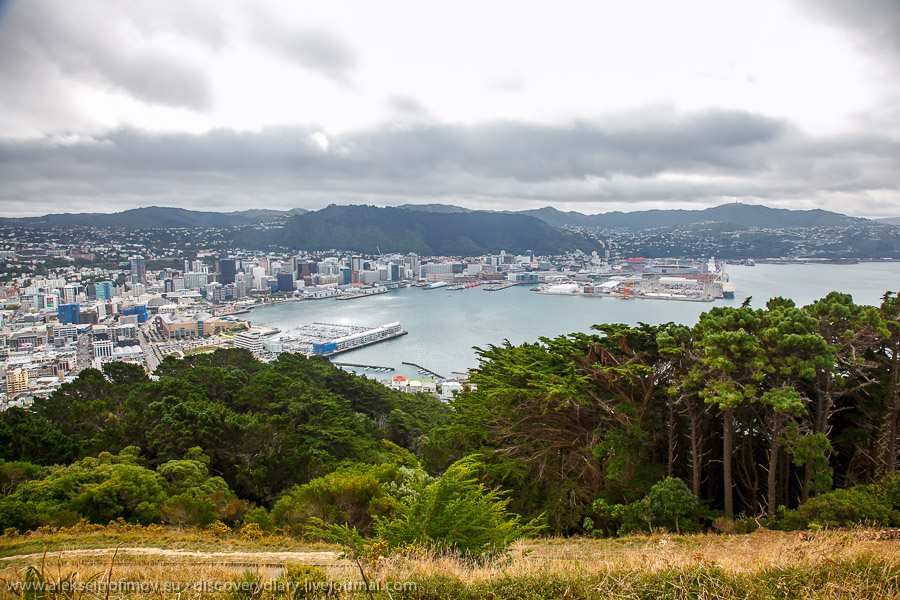 The view to the South. The mountains behind the strait is the South Island. 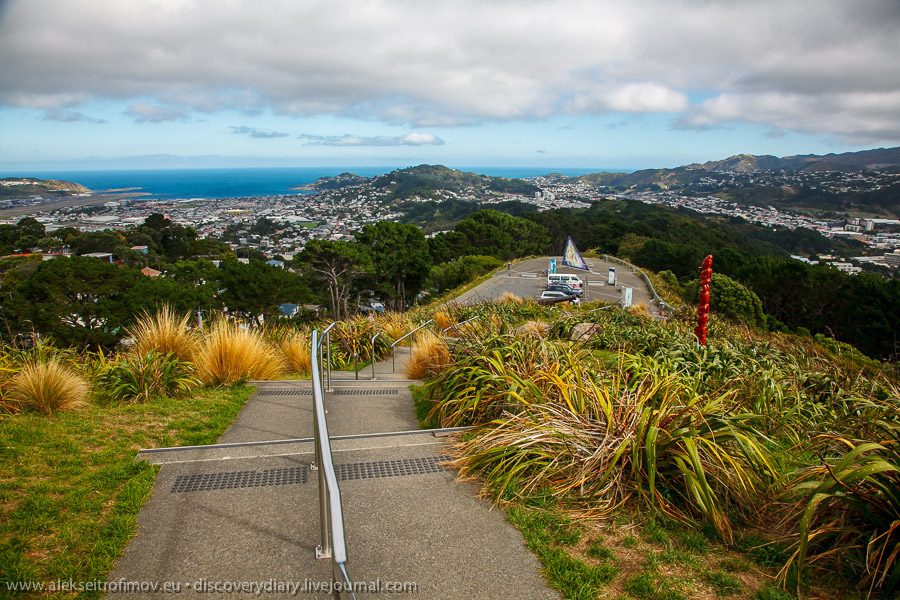 Mount Victoria is criss crossed by mountain bike tracks. The bikers fly by you all the time – some fly down, some fly up! 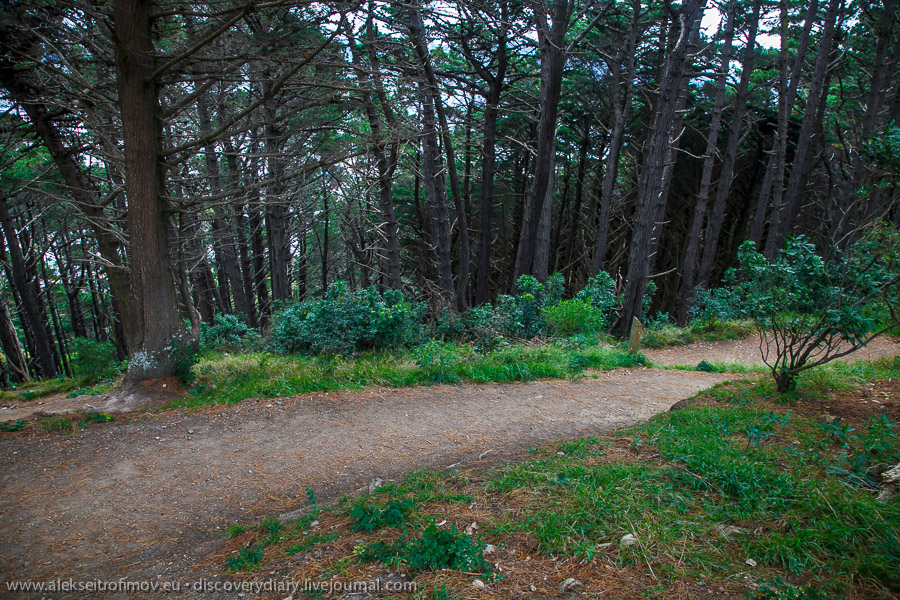 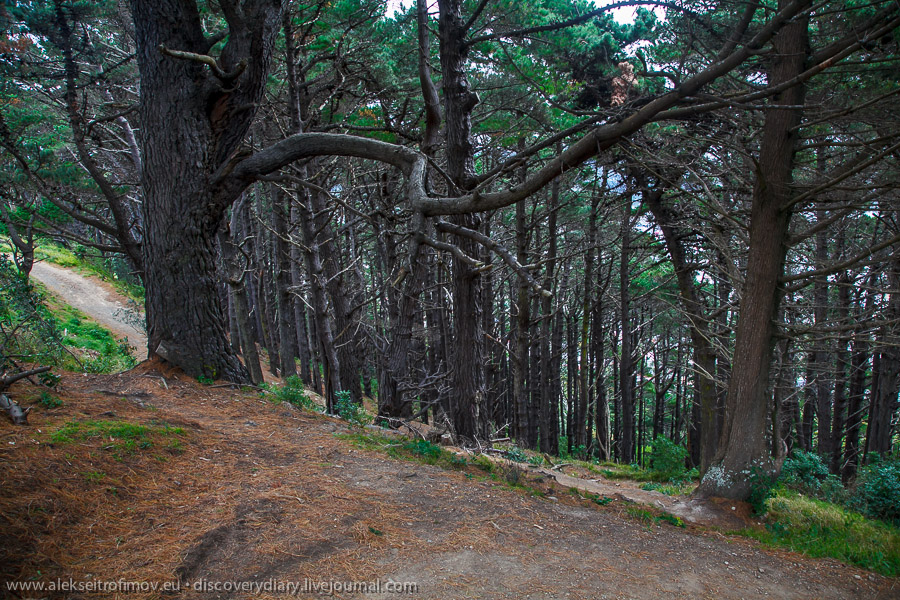