It takes three hours to cross the Cook Strait by ferry from Wellington. Surprisingly as it crosses the ferry moves mostly to the North (and West) – the South Island hugs the North Island in such a particular way here. A very beautiful crossing indeed.

The rocks of the North Island: 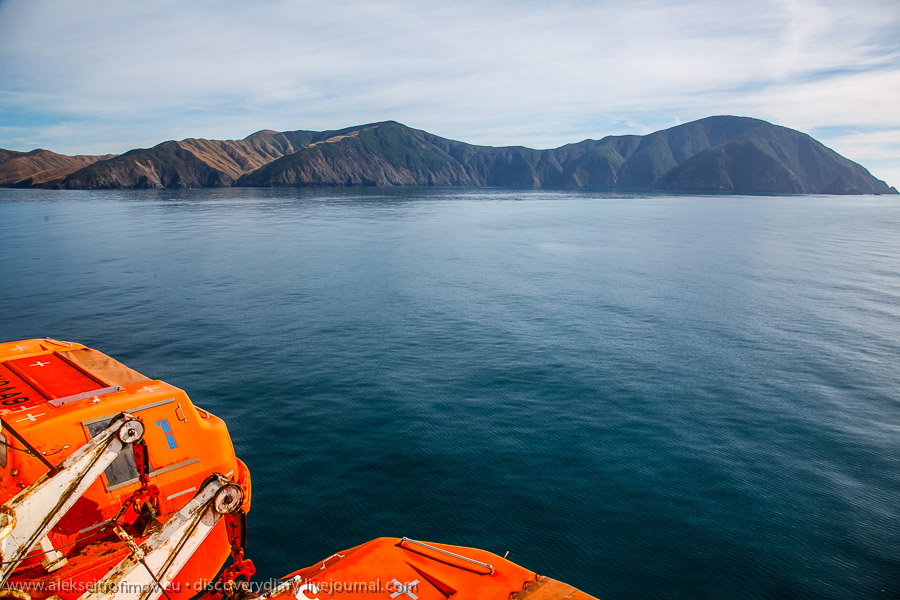 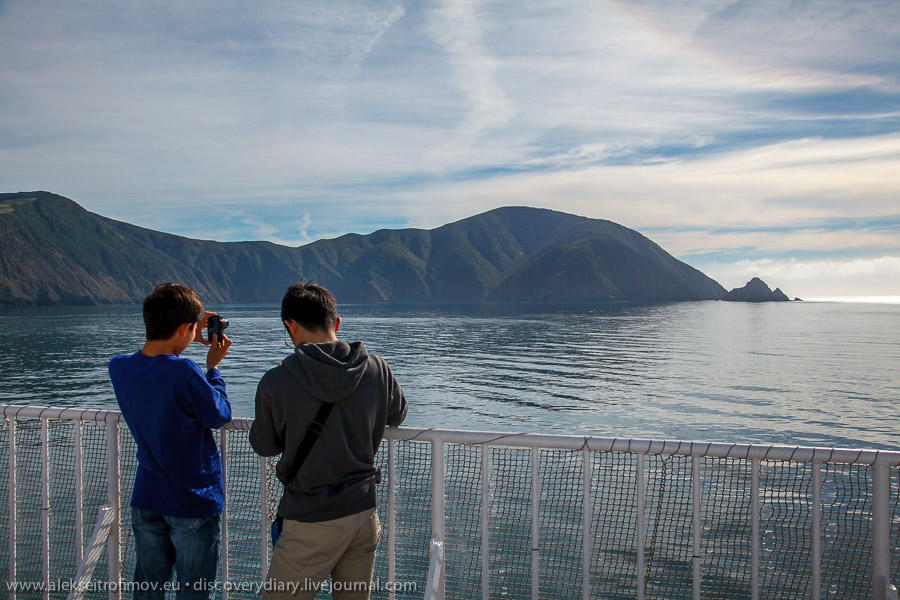 We are sailing between the tiny islets belonging to the South Island group: 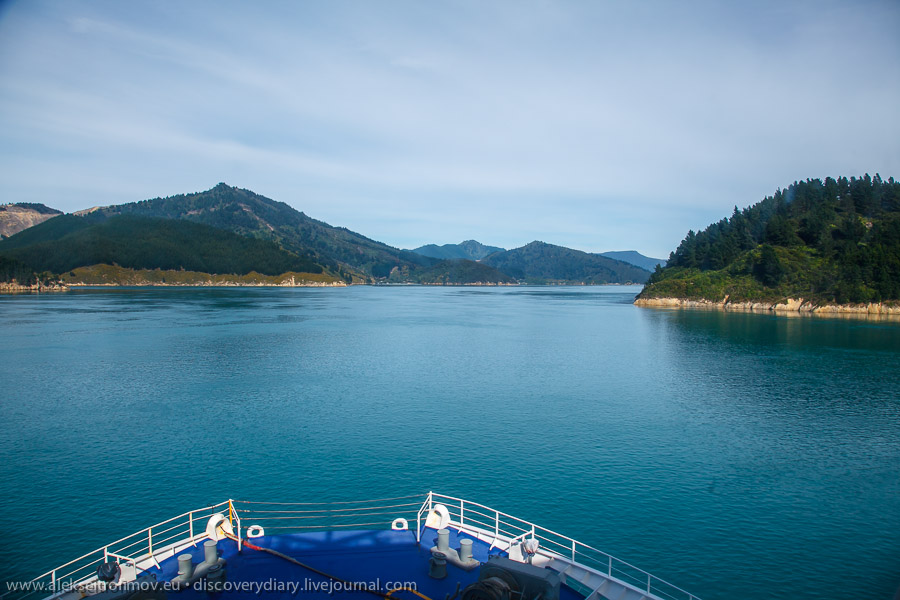 The ferry arrives in the town of Picton. I’ve heard it’s very nice. 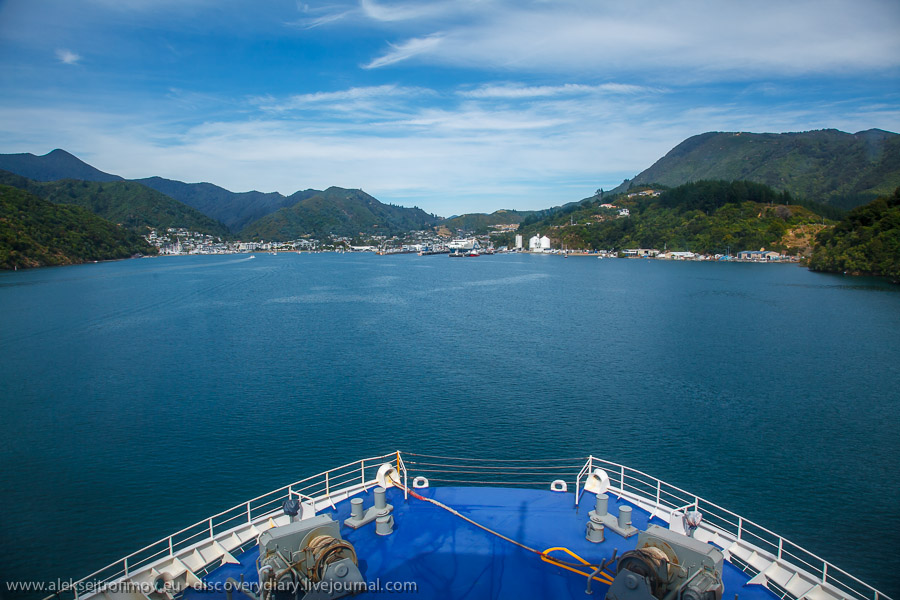 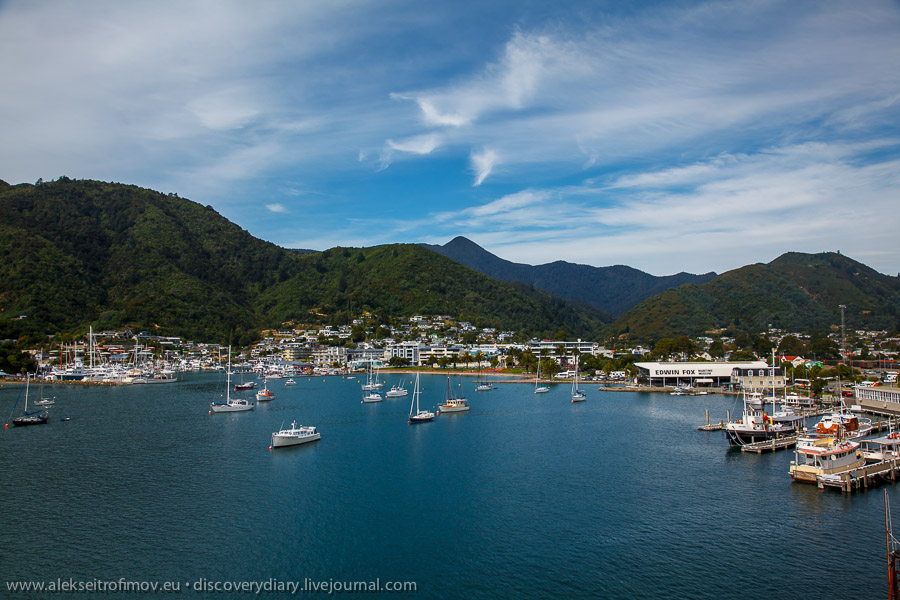 Without staying in Picton, we headed immediately for a little place called Kaiteriteri, located on the ocean shore in the Abel Tasman National Park – one of the most picturesque and popular in New Zealand. The vast majority of visitors comes to Kaiteriteri in summer, when the beach season is on and it’s warmer. When we were there, the season was actually over, so it was quite empty, and yet the sun was shining and it was warm. In the evening I walked by the beach and watched the sunset. 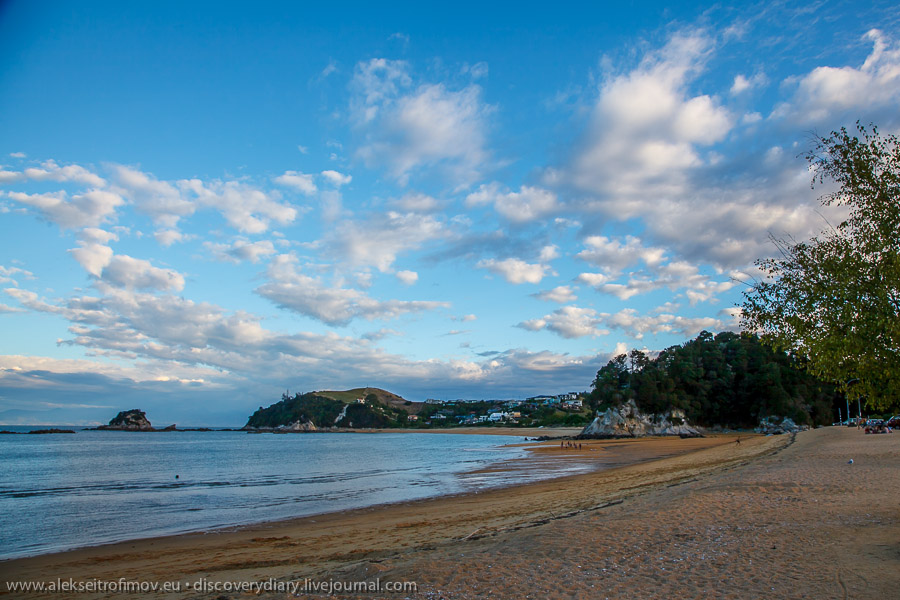 The next morning we embarked on a kayak trip with the views of the National Park. We were four in our two kayaks. Covered several kilometres I guess. 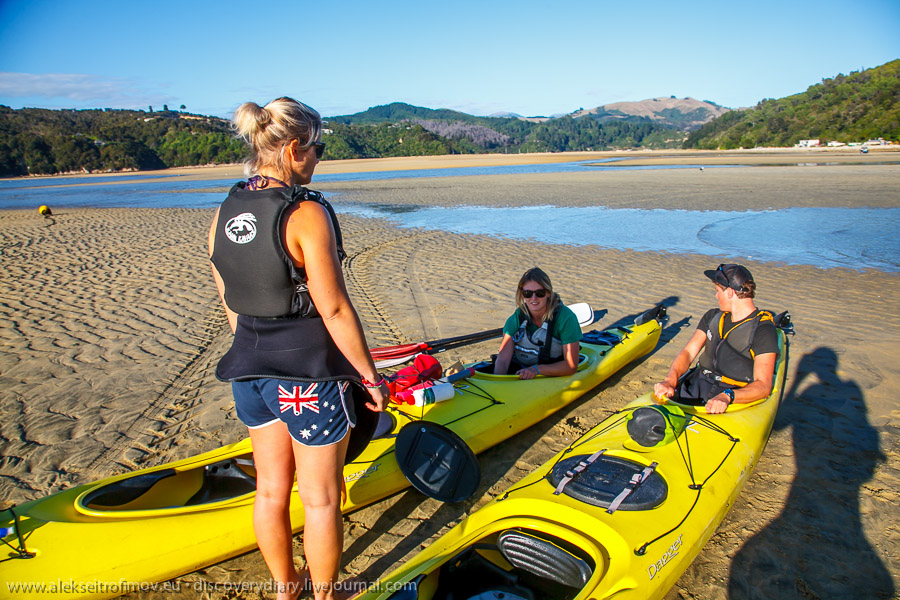 First thing we circumnavigated one of the rocky peninsulas that break the shore in Kaiteriteri area into several bays. On one of the rocks we even noticed a tiny local penguin! Who disappeared almost immediately. 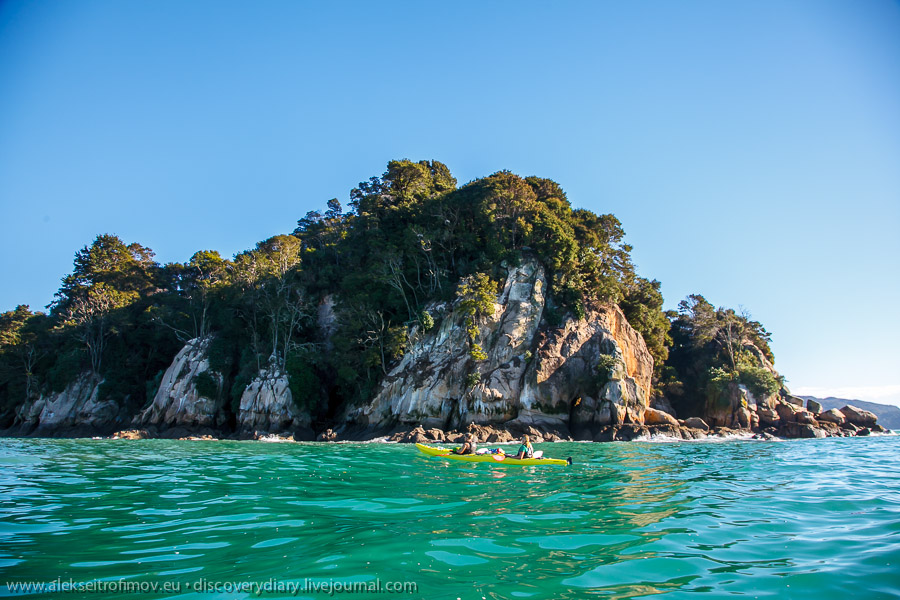 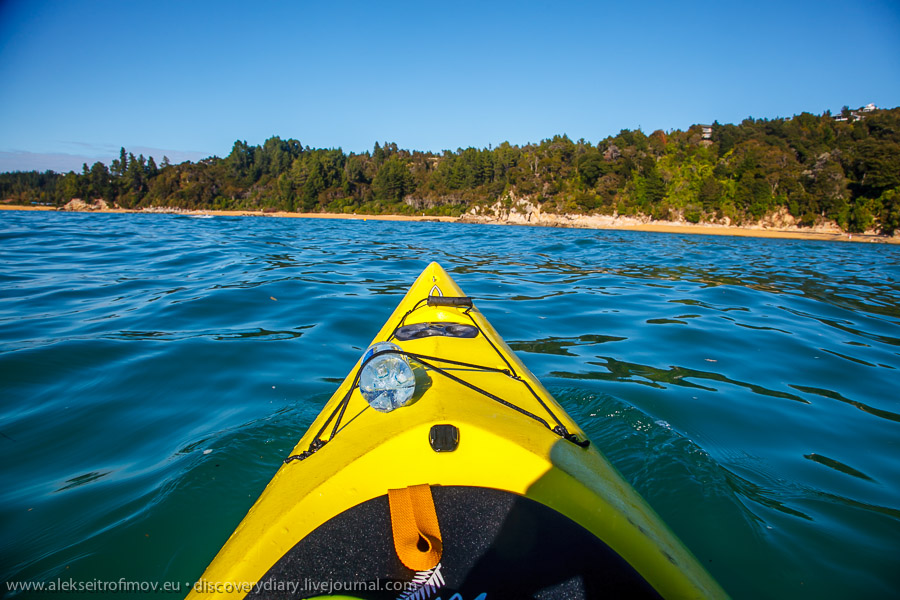 After passing the first peninsula, we landed on a relatively quiet beach on the next peninsula. 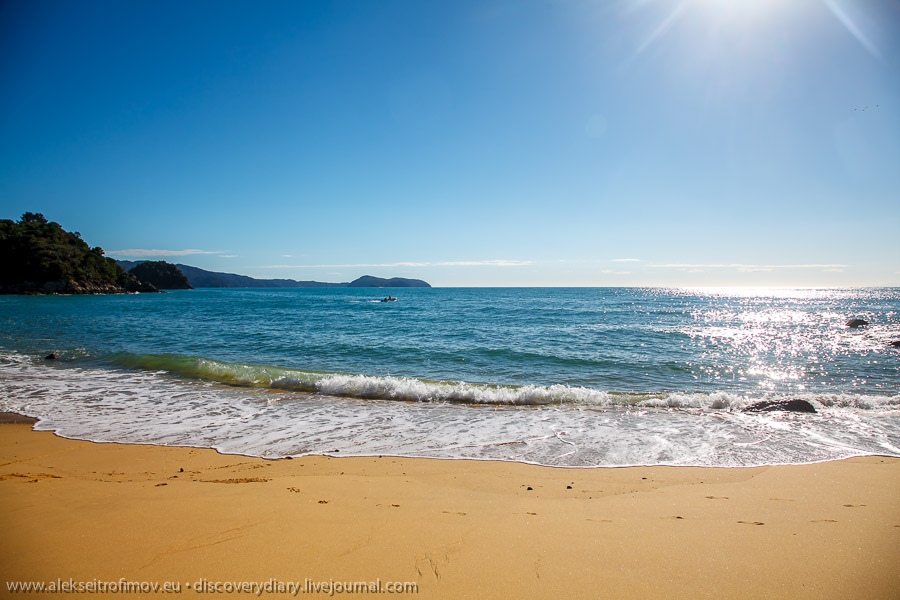 Moved kayaks up the beach to prevent them from swimming off: 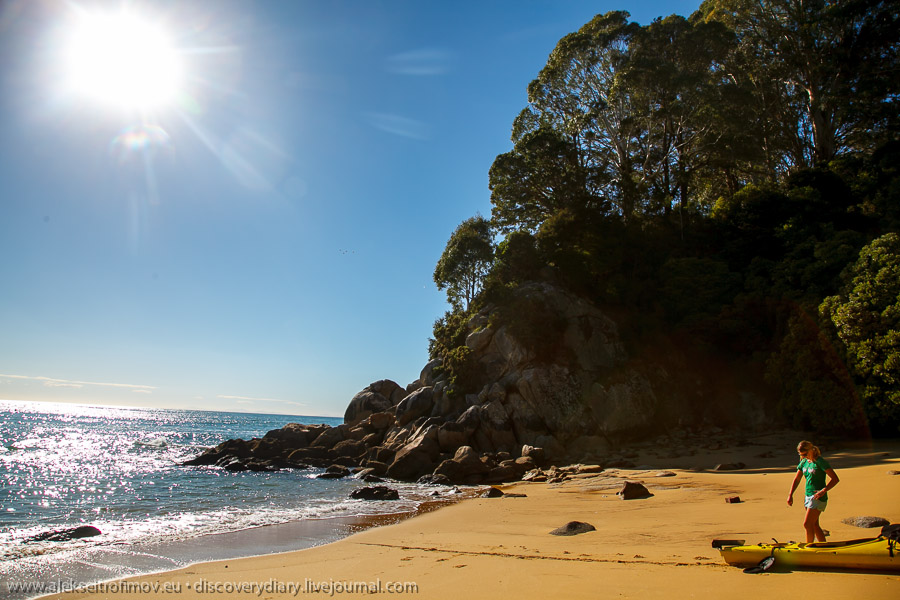 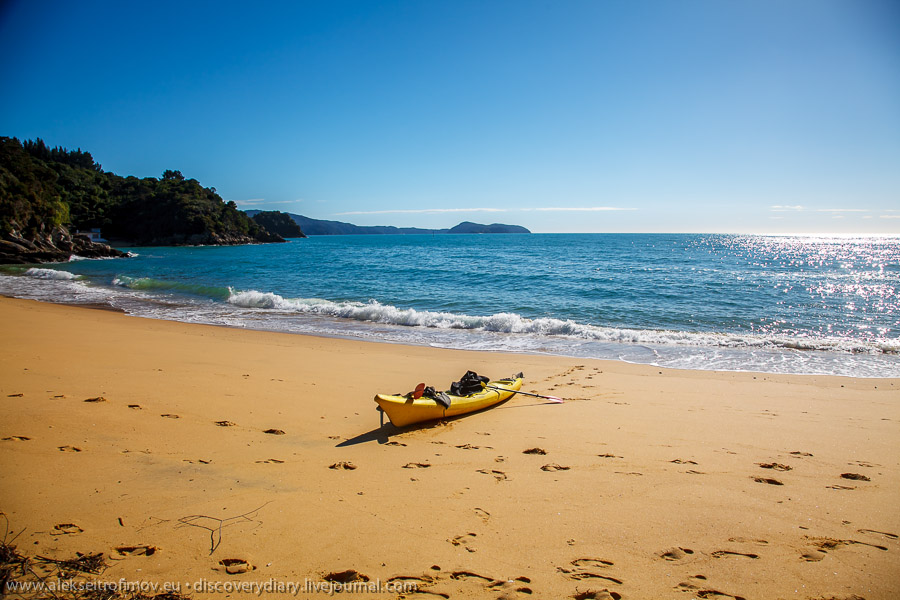 And climbed a little hill on that peninsula. From there you can already see Kaiteriteri itself: 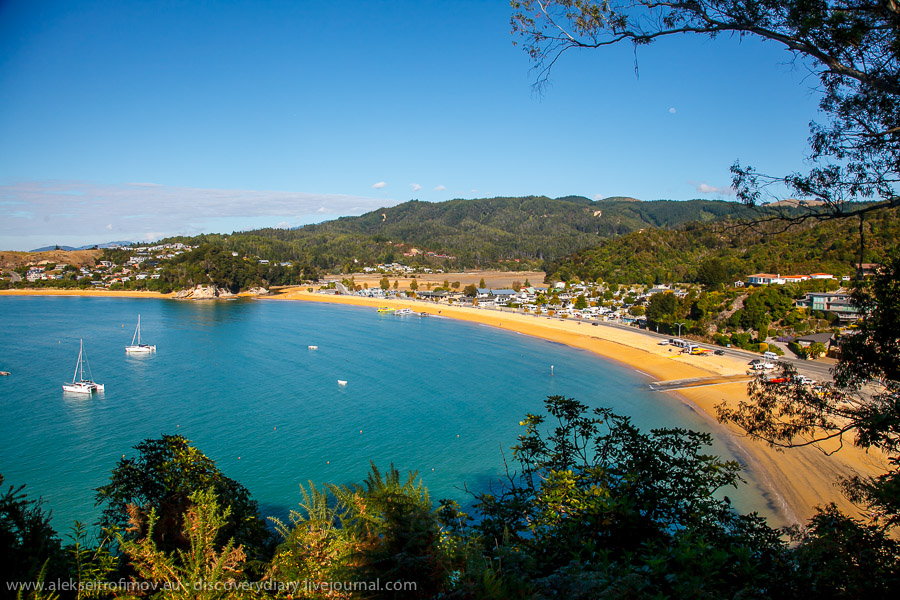 The view to the other side, from where we came: 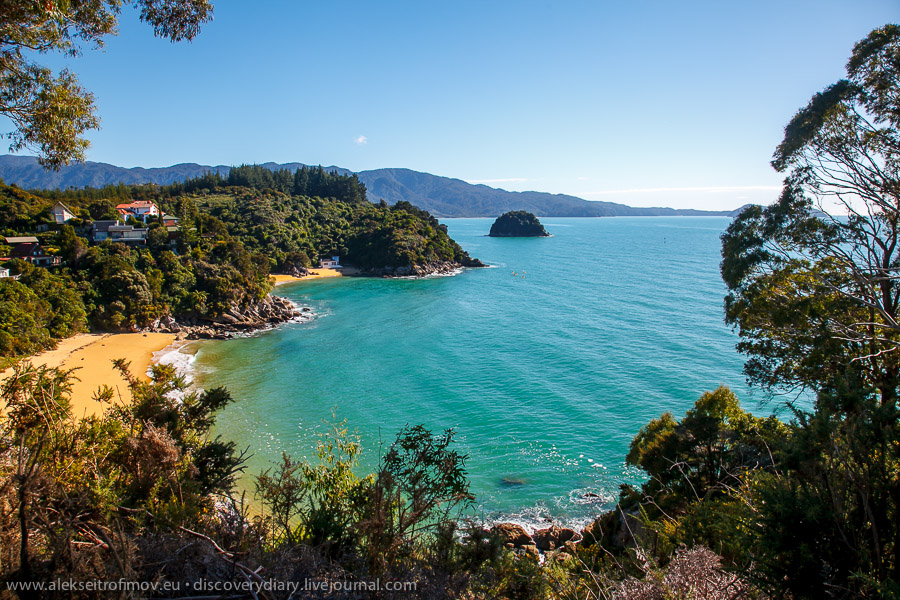 The next day it was a long bus drive along the West coast of the South Island. This coast is considered the most beautiful in New Zealand and deservedly so! On every turn an amazing view opens up in front of your eyes. Reminded me of Scotland quite a bit.

One of the stops was lake Rotoiti. 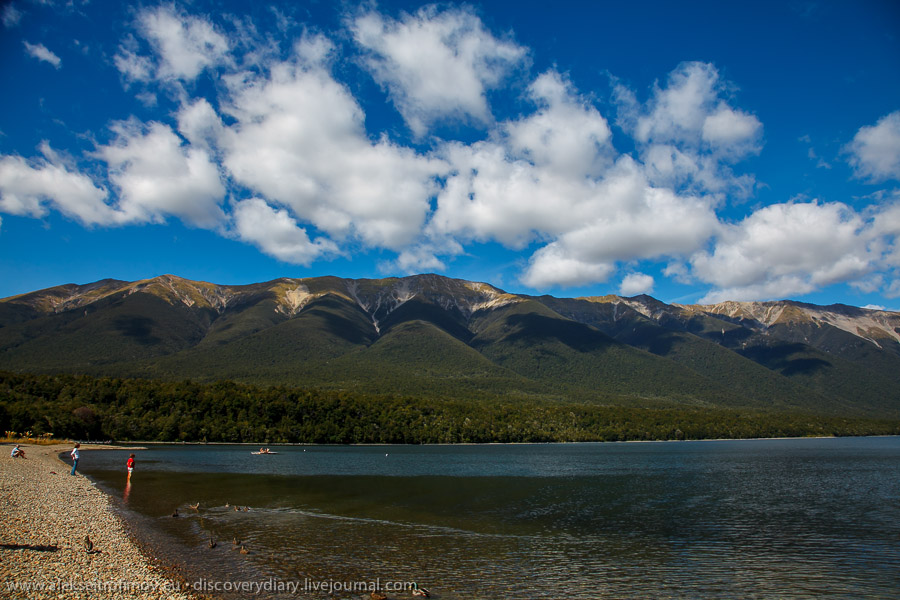 The driver challenged us to jump into the lake from the pier. The lake water is pretty cold of course. Without thinking much, I jumped too – a very pleasant sensation. 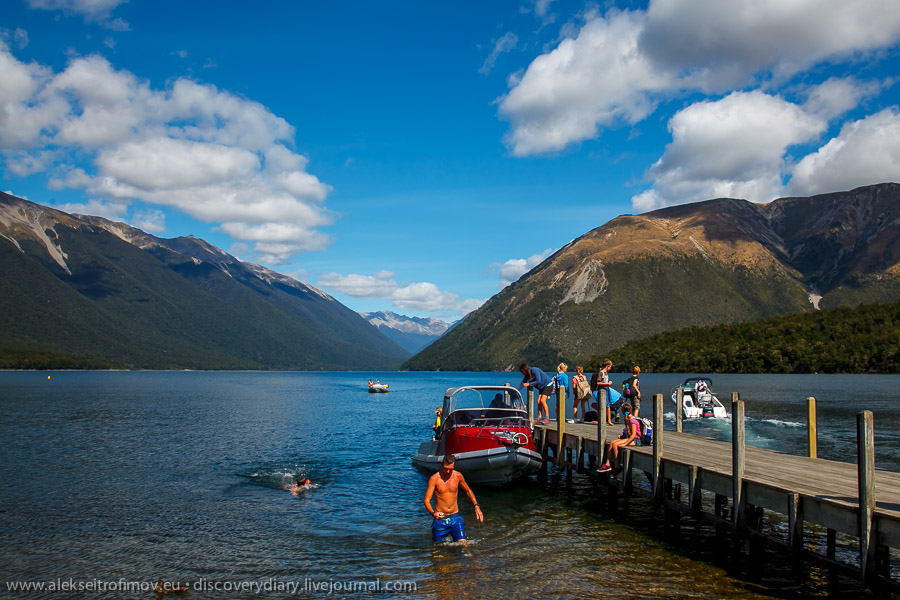 My travel mates are looking at… 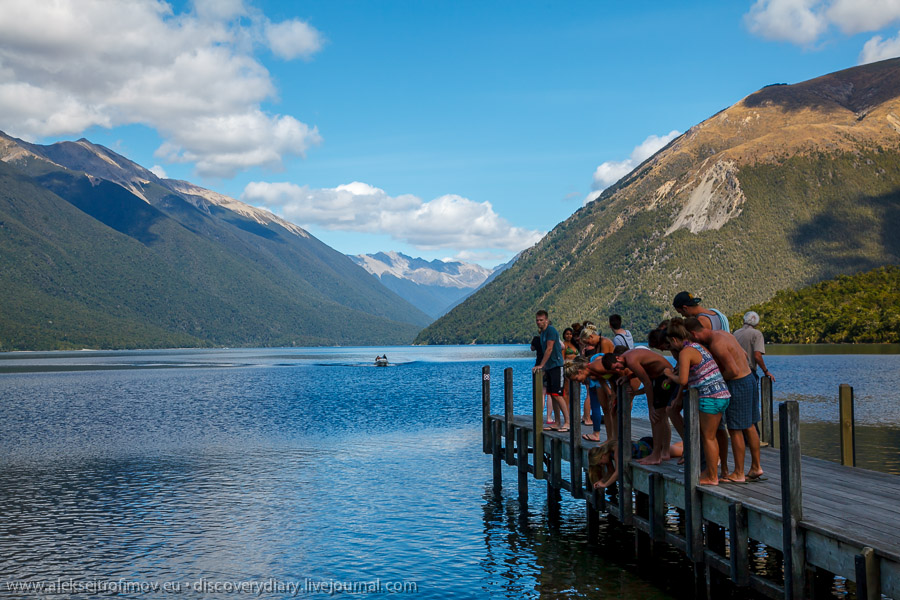 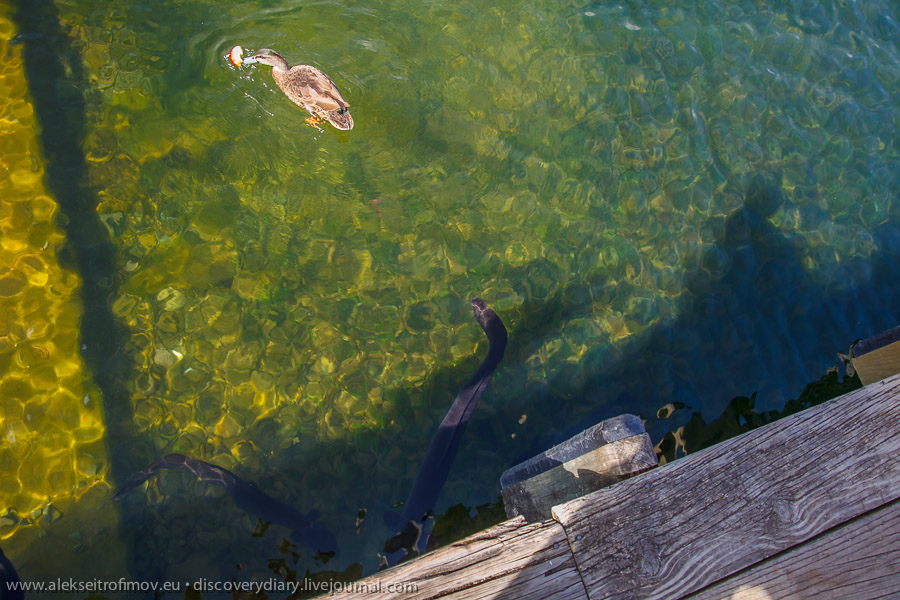 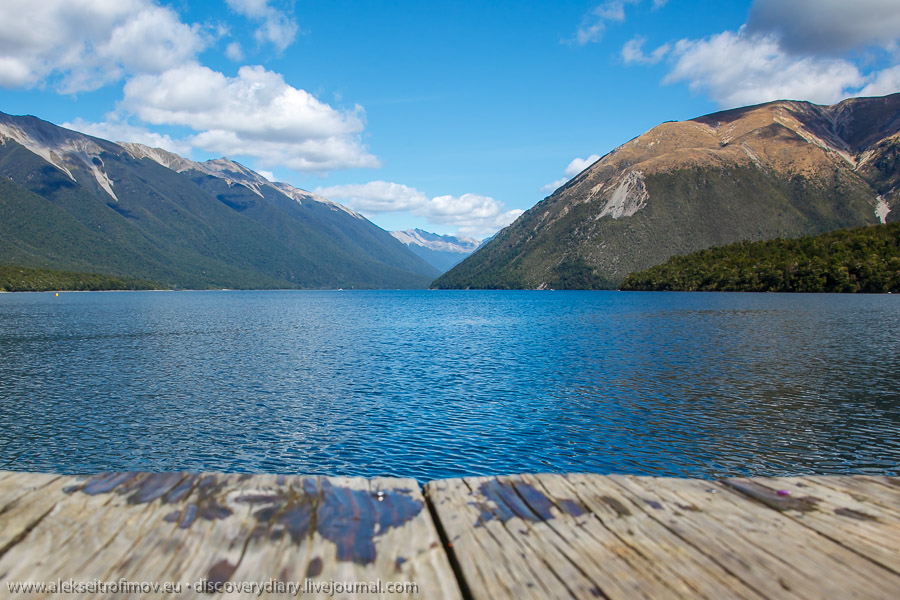 Further down the road – the next day, if I’m not mistaken, after an overnight in Westport – we reached the Foulwind Cape. It was so named by Captain Cook who was blocked there for several days by strong winds. 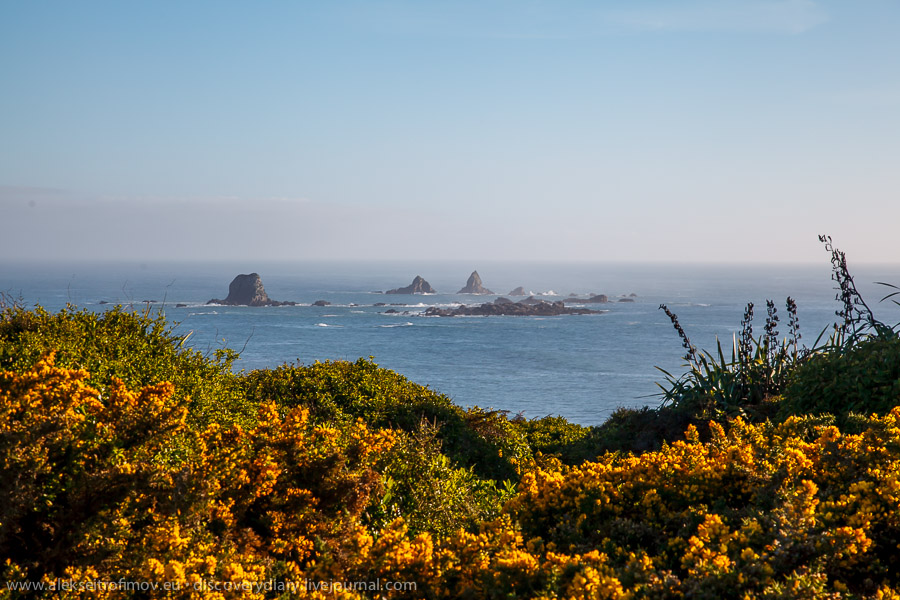 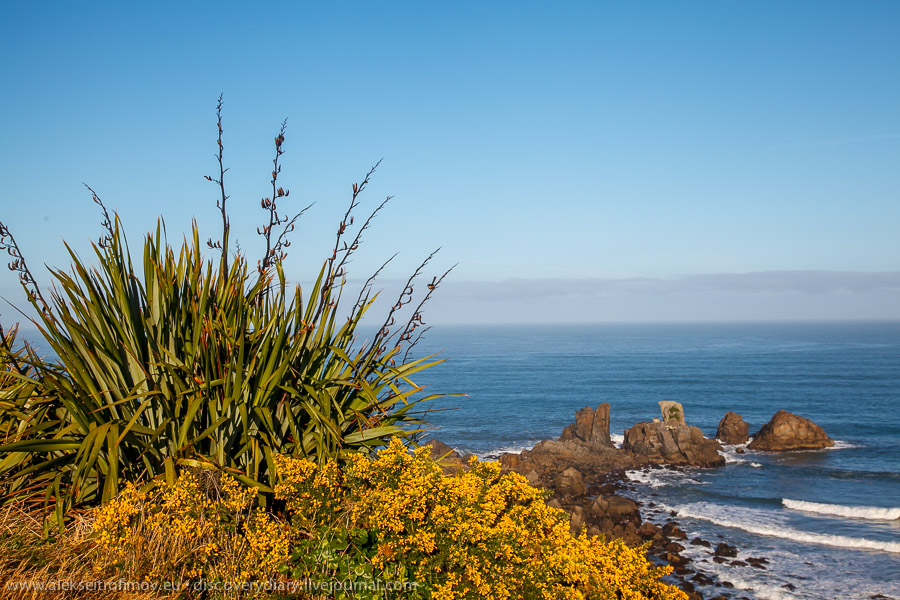 Nothing to add really. The most beautiful coast in NZ. 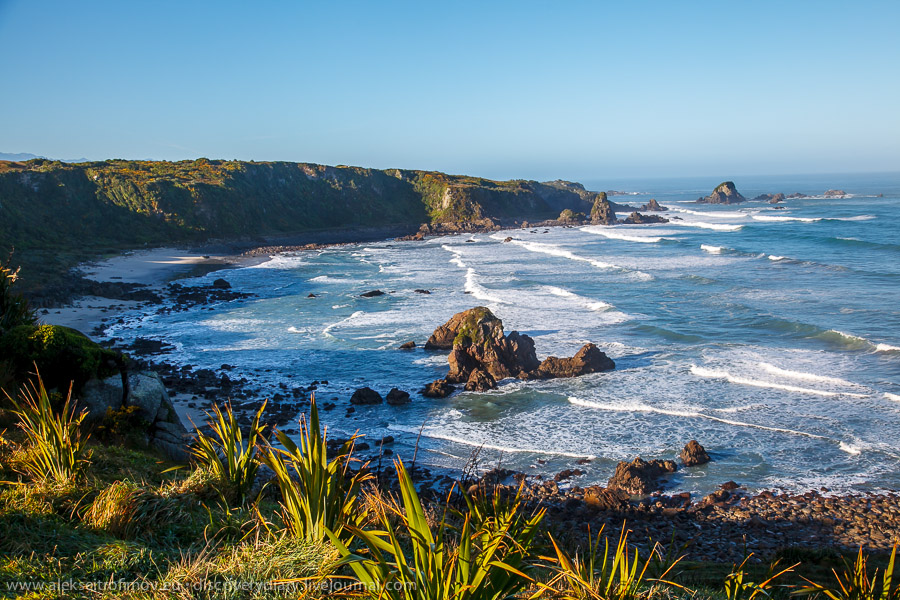 It was here that New Zealand was sighted by a European for the first time. The Dutch explorer Abel Tasman reached this shore 100 years before Captain Cook. He did register the existence of New Zealand (and gave it its name – Zealand comes from the Dutch province of Zeeland, and not from the Danish island, as some think), but he did not actually land. He was met by a Maori delegation in canoes and committed a cultural faux pas – when the Maori sang, he should have kept quiet as a sign of peace. Instead he order a series of gunfires. No way he would have known the correct course of action of course. Anyway when his sailors headed for the shore, the Maori attacked them and Abel Tasman was forced to retreat. New Zealand failed to become a Dutch colony. 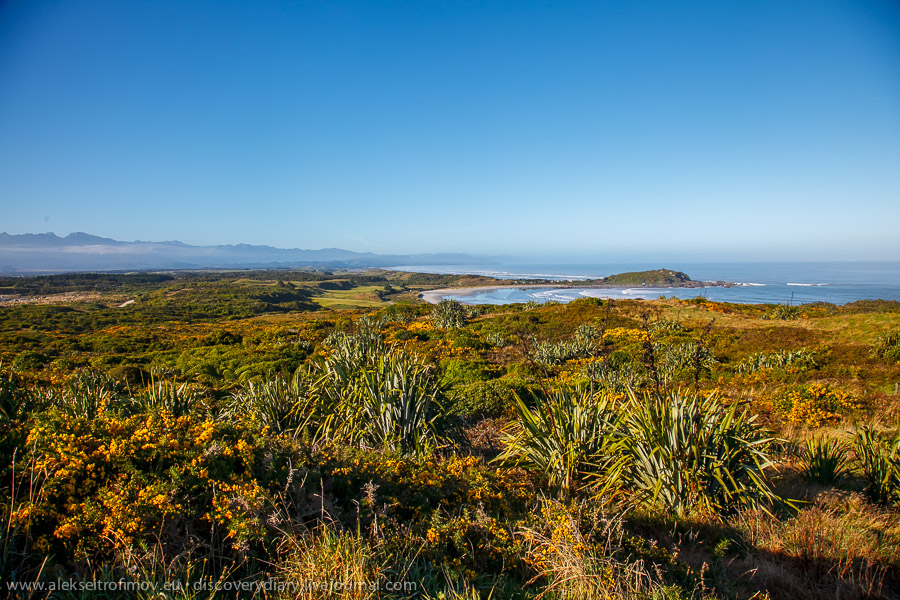 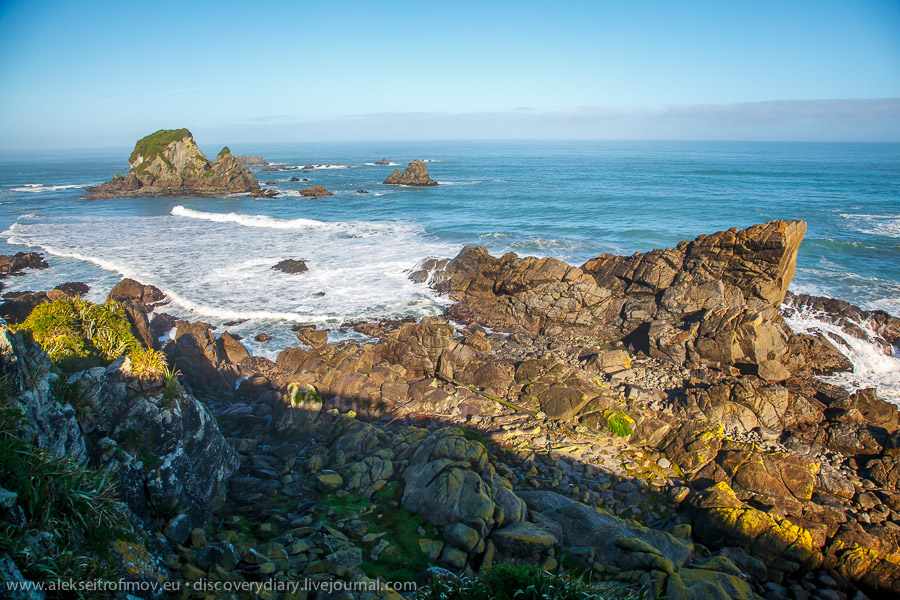 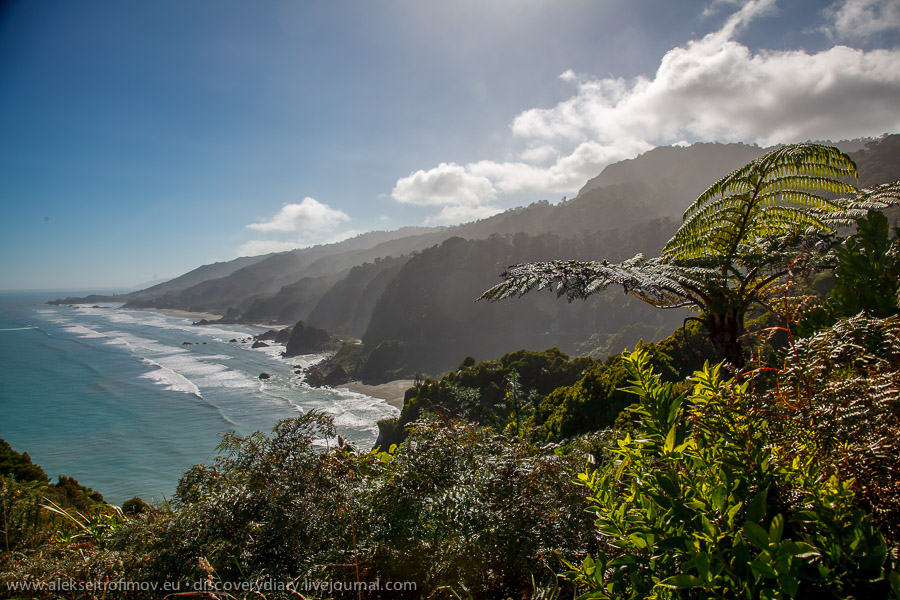 The next point of interest on the route is Punakaiki, the Pancake Rocks. The name comes from their particular shape representing a geological formation created by sediment on the bottom of ancient oceans. 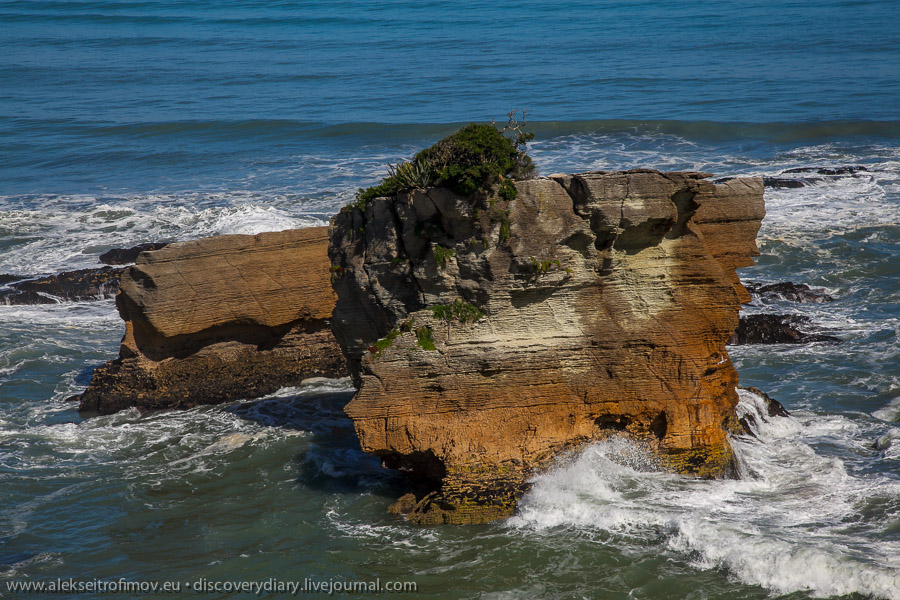 To add to the surreality, from time to time a water fountain rises between the rocks – the ocean creates an immense pressure and the water has no other way to escape. 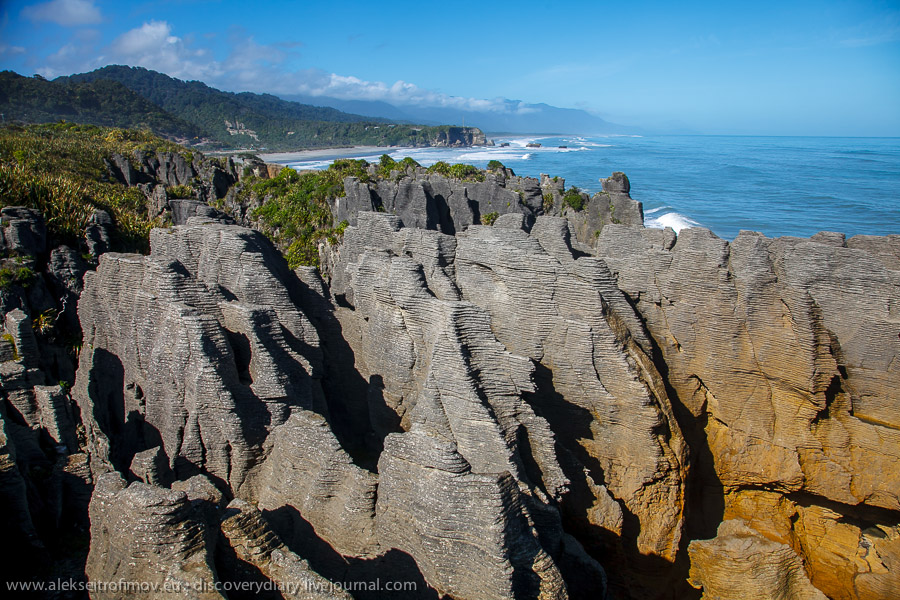 This rock in Punakaiki is particular for various animals that can be seen in each of its formations. The most striking one is probably the lion profile of the rightmost rock. 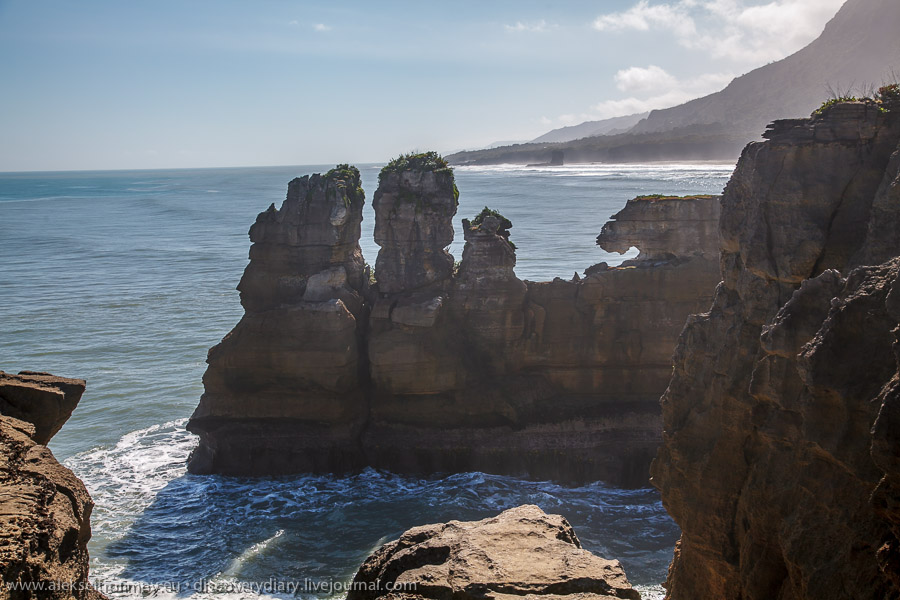 Finally a beach in the town of Hokitika. 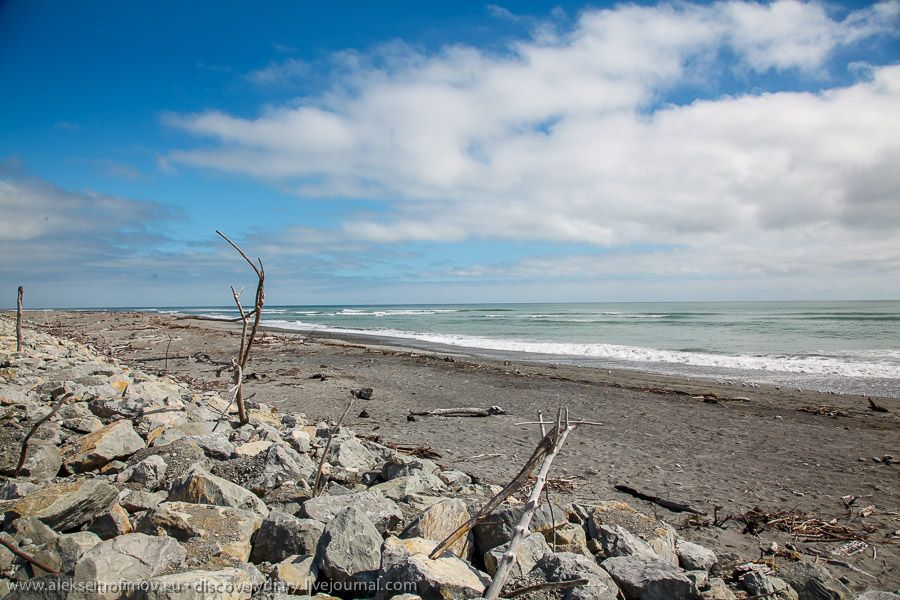 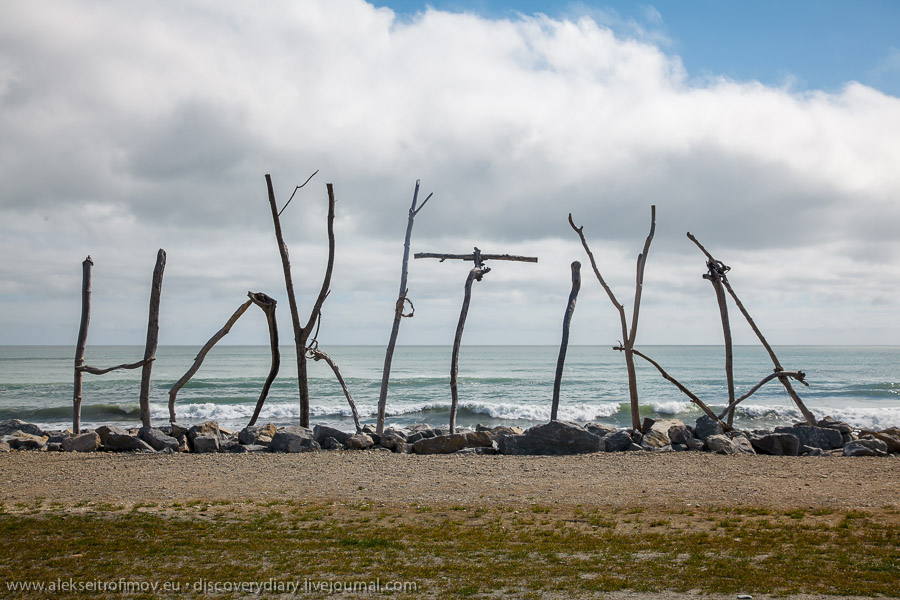