My time in Australia was so intense that at the time there was no way to process all the photos and to publish all the posts about it. And so it happened that I never came to publish the posts about Australia on this blog. Finally now some months later I have the time to do it. Although out of sequence, I will now publish the overview of this trip, which by all means was one of the highlights of my journey around the world.

As a matter of fact, I visited Australia twice on this trip. The first time I came to Australia after Indonesia, taking a plane from Bali to Darwin, the capital of Northern Territory. I had been considering a stopover in East Timor between Bali and Darwin, however at a certain moment very suddenly the Bali-East Timor ticket price increased tenfold. I imagined that a big party of UN workers was suddenly called. But for me that meant a direct flight to Darwin was my only option.

Darwin is only several hours by plane away from Bali, but it feels like a completely different world. Indeed your first emotion is akin to a cultural shock. Your status abruptly drops, from a wanted business partner (the way Indonesians see you) you turn into an insignificant young man. Suddenly everything costs ten times more than in Indonesia. Wifi which is omnipresent in Bali is suddenly unavailable. And yet Darwin is not the worst place to adapt culturally. It is a small but extremely friendly town. Almost immediately though I departed to a three day tour of two National Parks that cover most of the North of Northern Territory. And the first day was spent in the Litchfield National Park.

I was there out of season, which meant that there were only very few organised trips available. I was lucky to arrive in Darwin right before one of such trips was departing. It was quite an adventure to book it and on the day of departure I waited with some trepidation for the car that was supposed to pick me up. It was late for about 20 minutes – prompting me to start calling their office as I was certain they’d forgotten about me – and then the van (and it was a van!) appeared. The driver was also the guide. I was the first to be picked up and little by little our group constituted itself. It is always a curious process and every group has an internal dynamic unlike any other.

Anyways the visit of Litchfield starts from the giant termite mounds. Termites play a key role in the biosphere of Northern Territory as there are no native large mammals. Their estimated total biomass dwarfs that of all other beings and they are responsible for clearing up the forest of all the dead plants and animals. The first type we saw was the so-called cathedral termite mounds. These huge earthen structures with partitions indeed look like Gothic spires. Entire constellations of such cathedrals line up along the road. 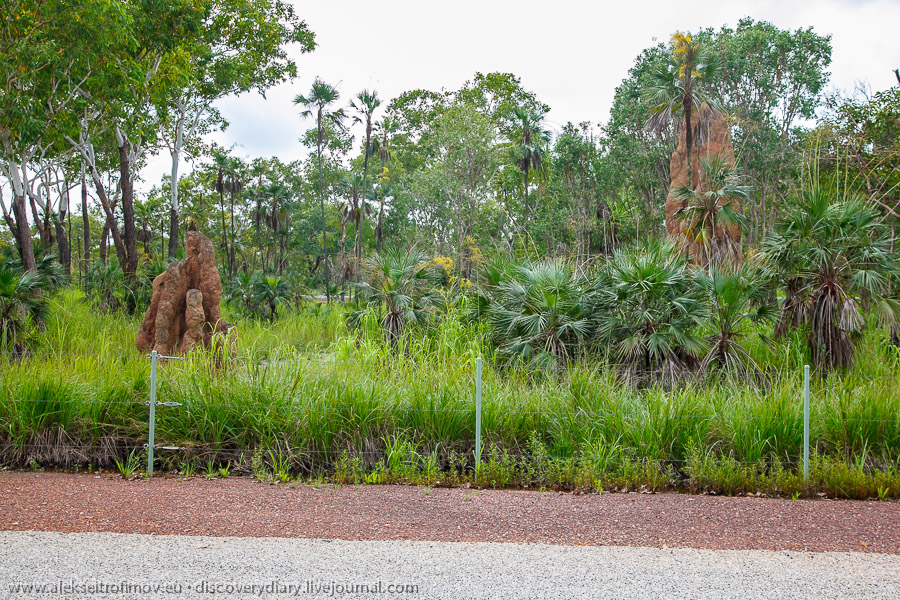 They reach many metres in height and it is quite fascinating to imagine all the termites that swarm inside such a structure. 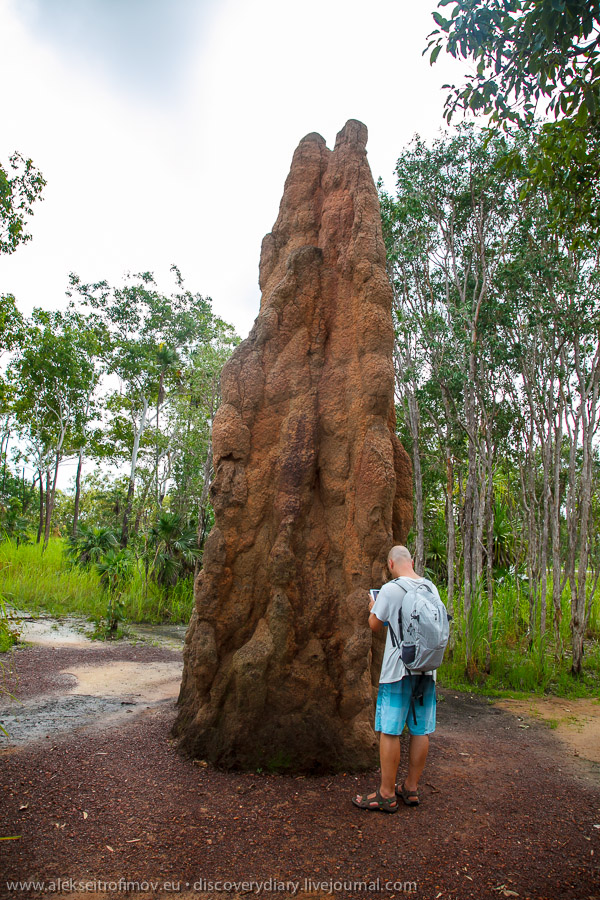 A termite mound from up close. Our guide broke a little piece off the cover of the mound and the soldier and worker termites immediately occupied the wound, protecting it and rebuilding the cover. The termite mound will only live during the lifetime of the queen that founded it. She is living in a special chamber located about 1 metre above the ground level. Her length is about 20 cm. She lives about 50-60 years and all this time she continuously carries eggs that produce all the other kinds of termites – including many husbands that replace each other over and over. 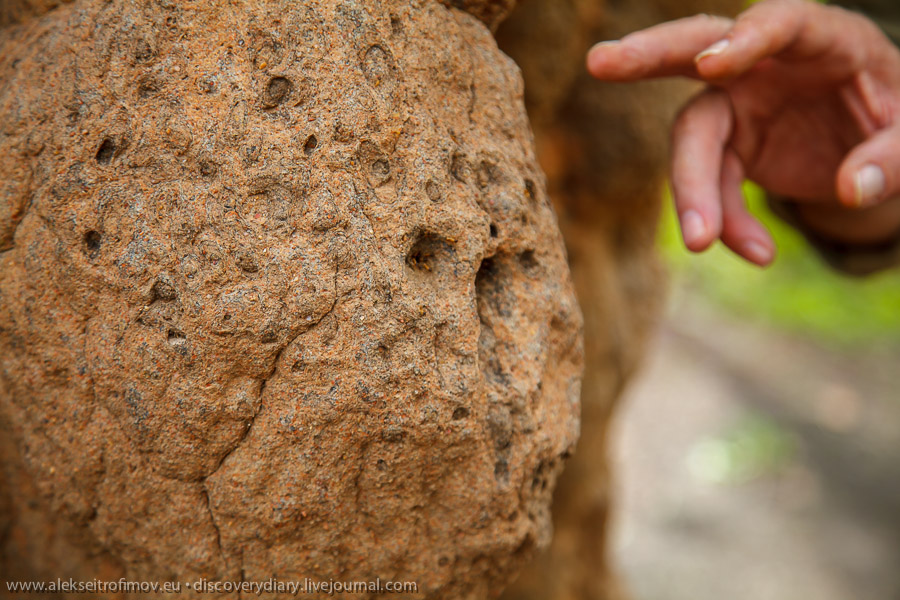 In the colonial times though the termites got a competitor as the settlers brought herbivorous mammals to Australia. Buffalos in particular were very successful and quickly put the natural balance of local forests at risk. In recent years it was decided to systematically eradicate them, through hunting and catching them and sending off to Vietnam. We did see buffalos a number of times, here is one running as we look at it from the window of our minivan: 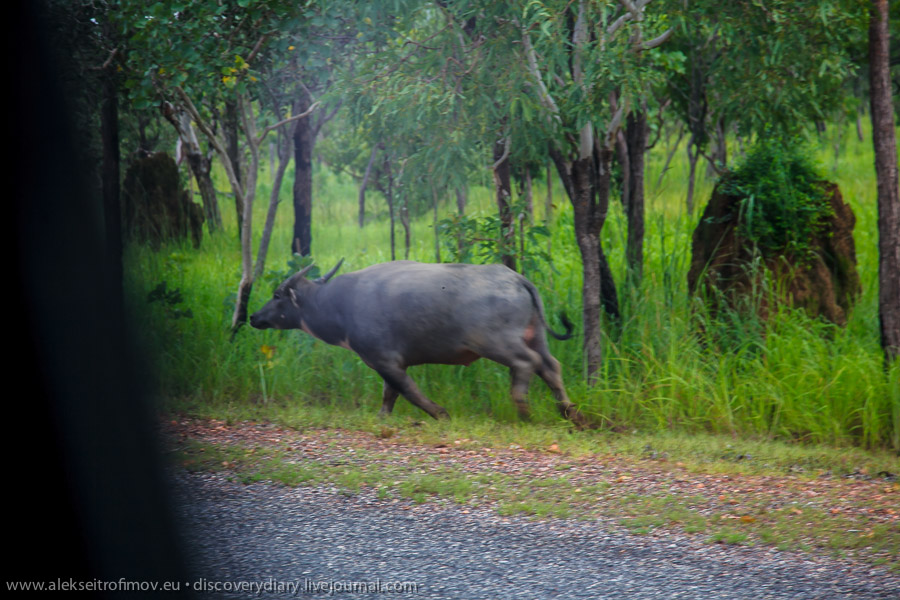 On the other side of the road we can see another type of termites. These are so-called magnetic termite mounds. A wooden path leads into the field of mounds: 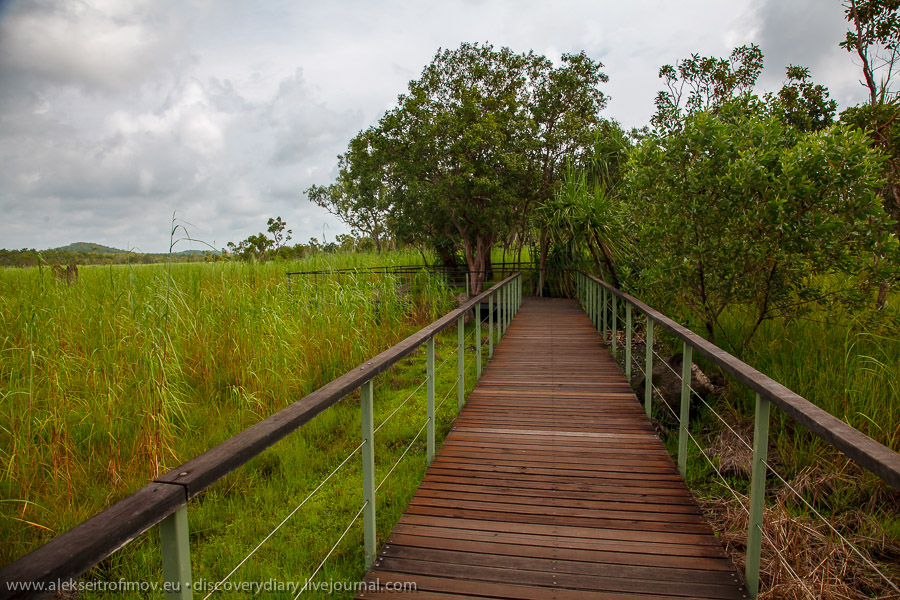 Which looks very much like a cemetery filled with funerary stones oriented strictly according to the cardinal directions: 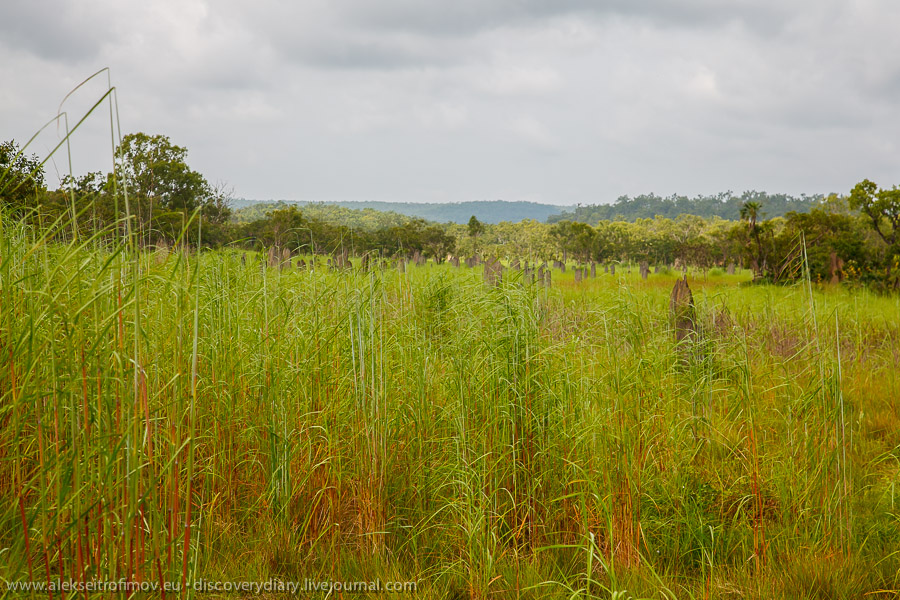 Indeed the mounds are oriented North to South in order to control the internal temperature. 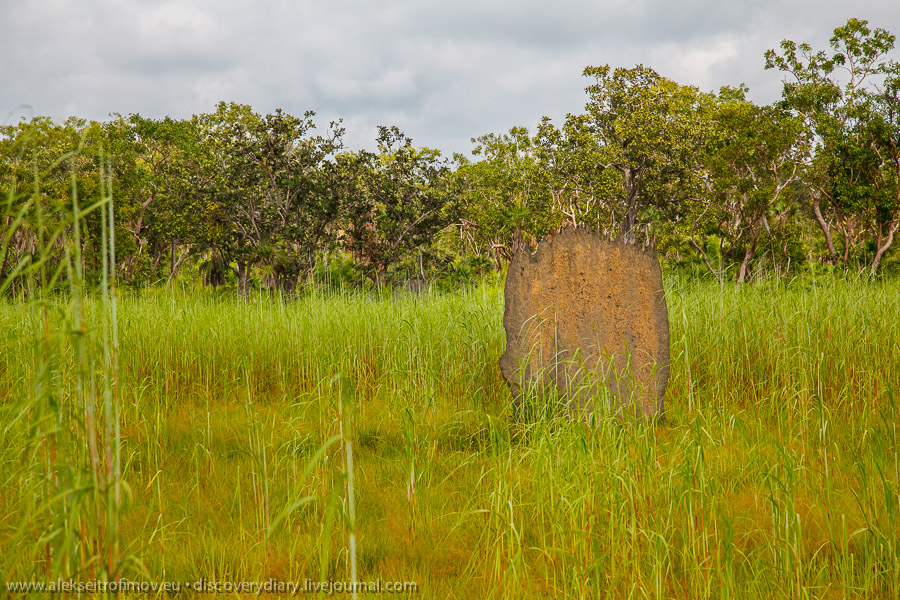 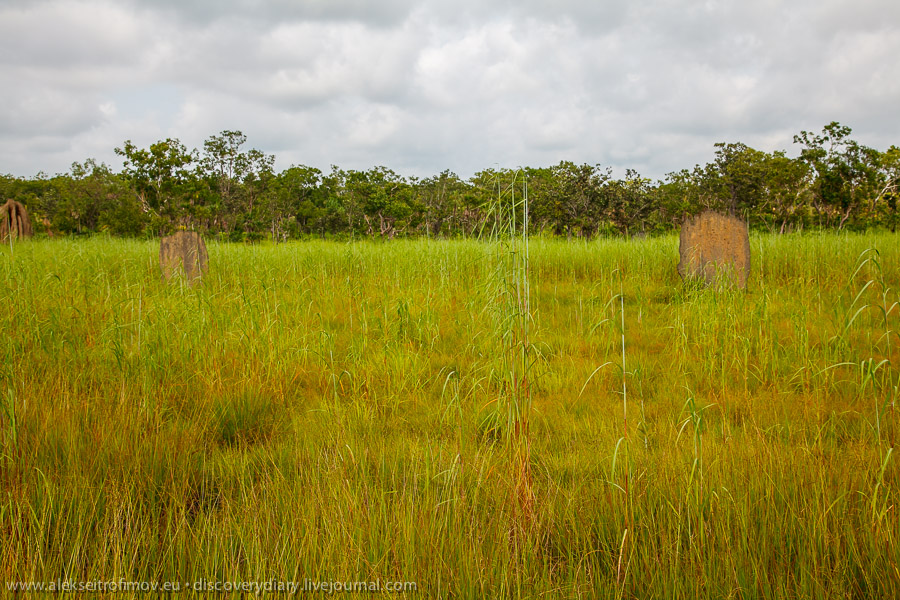 As we were driving, our guide suddenly stopped the minibus and asked us all to get out in complete silence. He walked around one tree and waved for us to follow him. His vision was quite incredible as he managed to spot something on this tree from the moving bus. Can you see it? 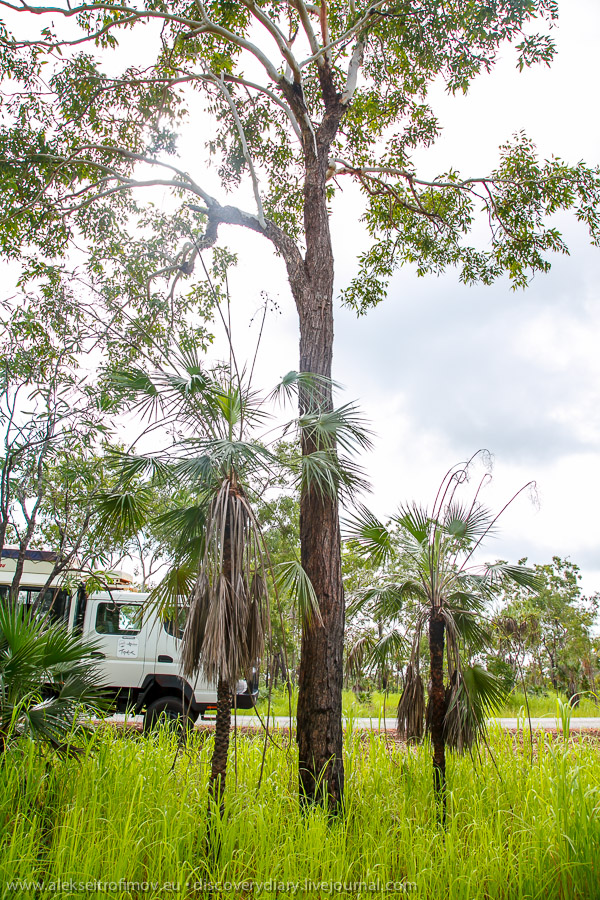 A chameleon is sitting on the tree trunk: 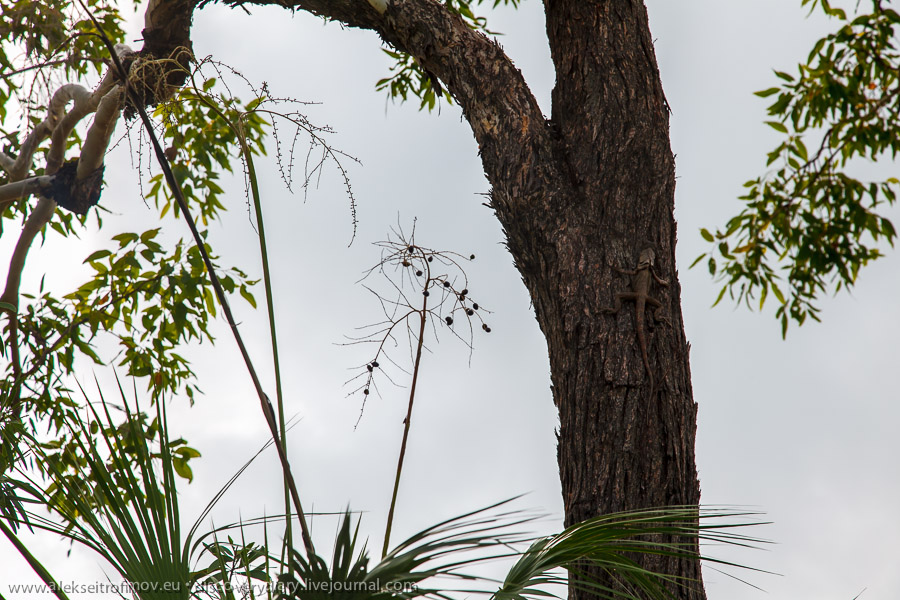 The guide explained to us that this very tree contains certain substance that is poisonous for termites. for this reason it was extensively used in colonial times for building houses. The knowledge about the tree came from the aborigines, who used it to make musical instruments as well as spears.

Our next destination was the Florence Falls, offering a very welcome opportunity for a refreshing swim: 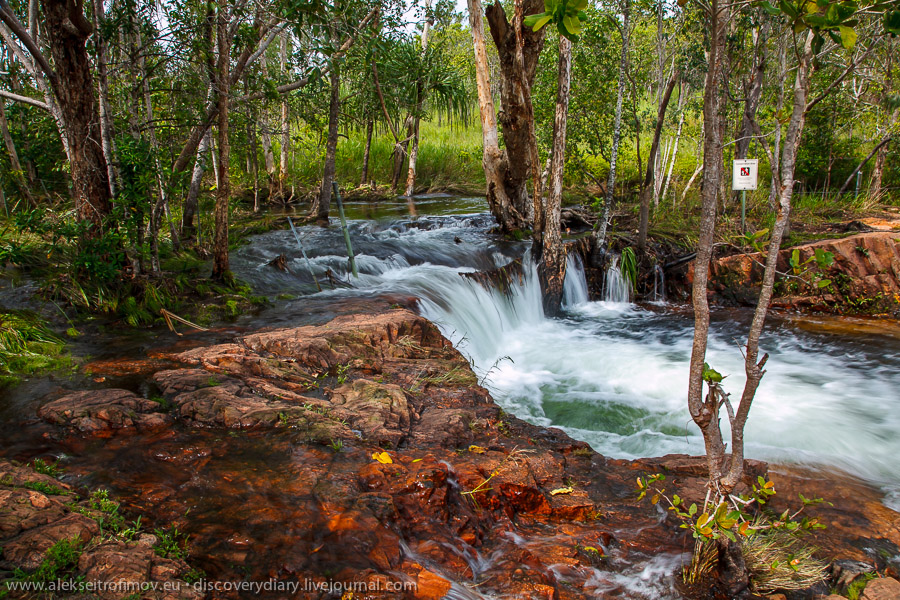 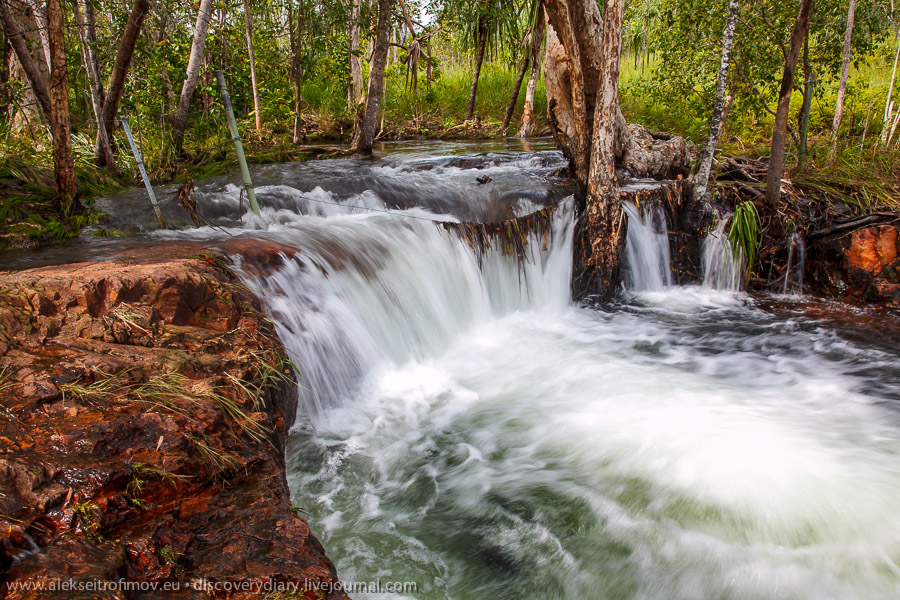 Nothing is sweeter than to enjoy the water’s pressure as you sit in the falls in this oppressive heat: 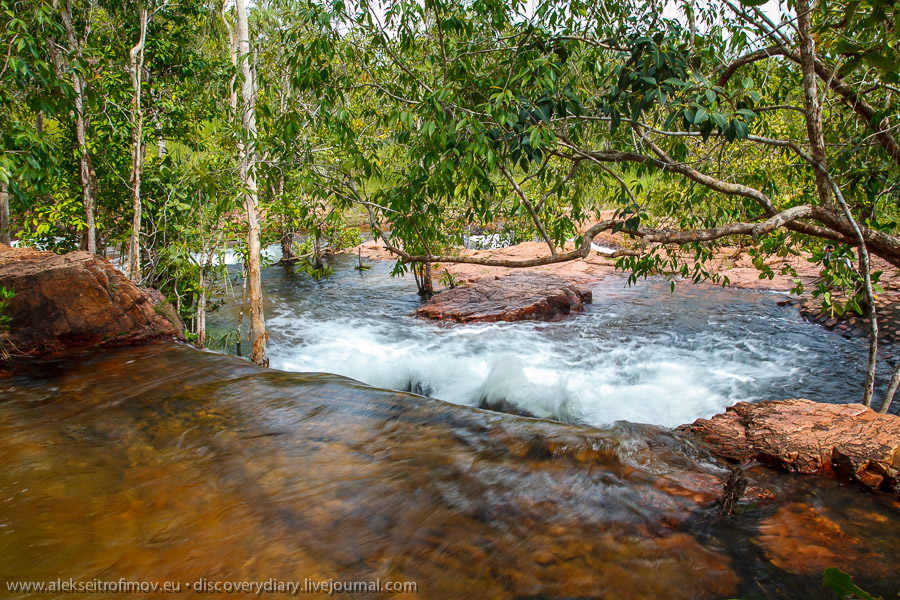 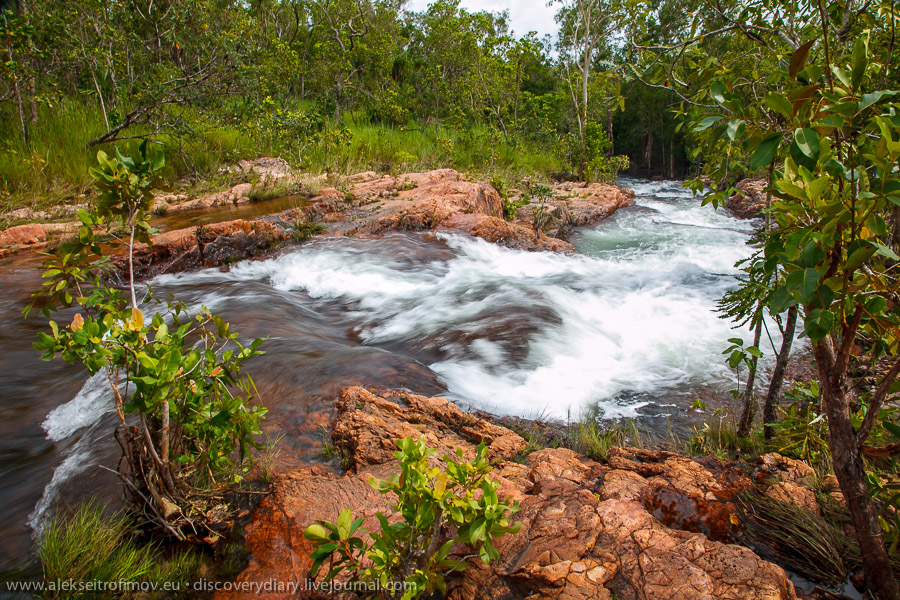 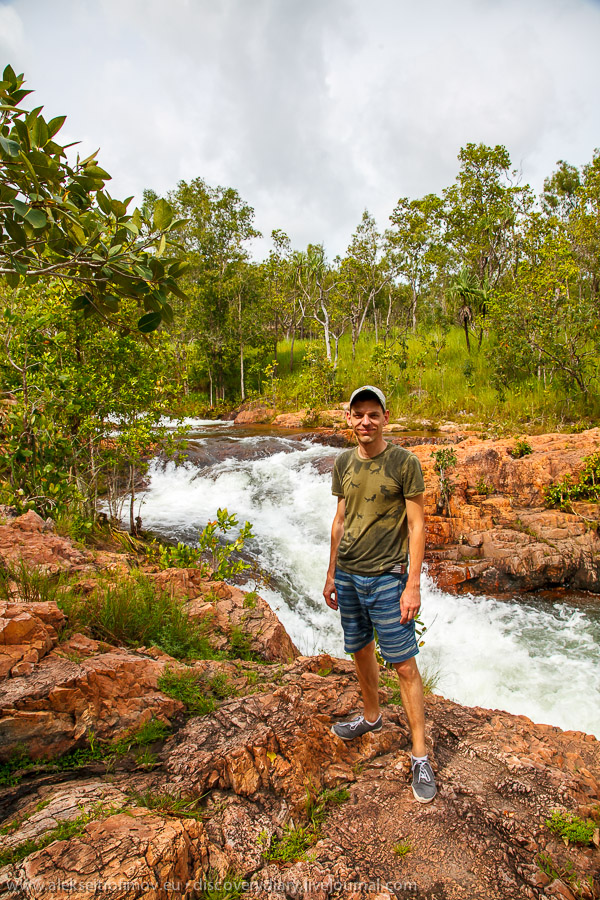 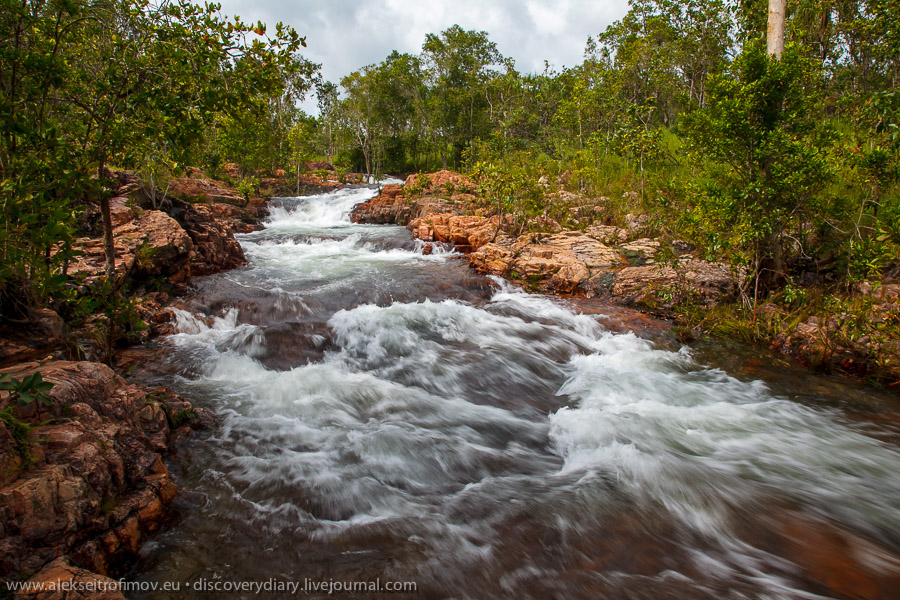 As the day unfolded, we took several walks through the bush, this fantastic-looking Australian low forest. 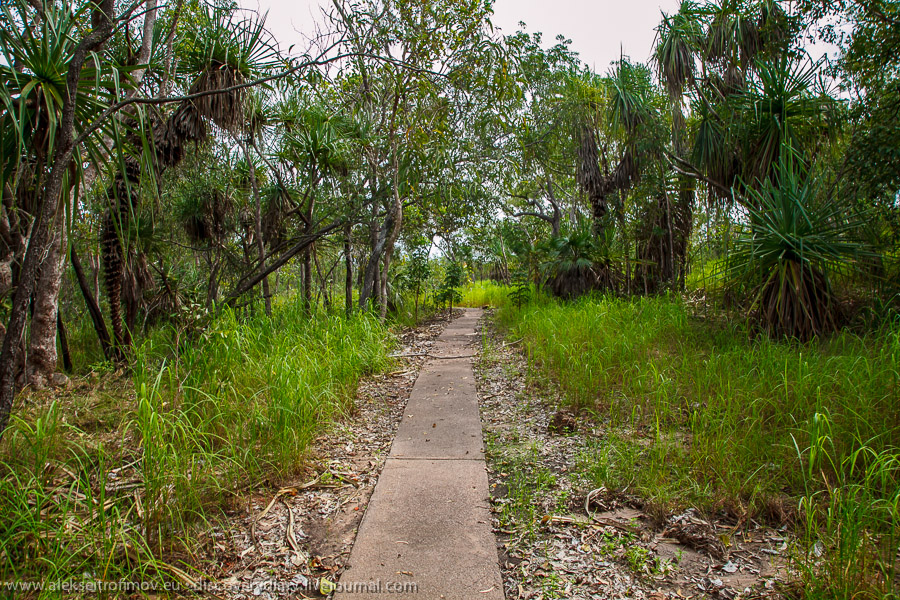 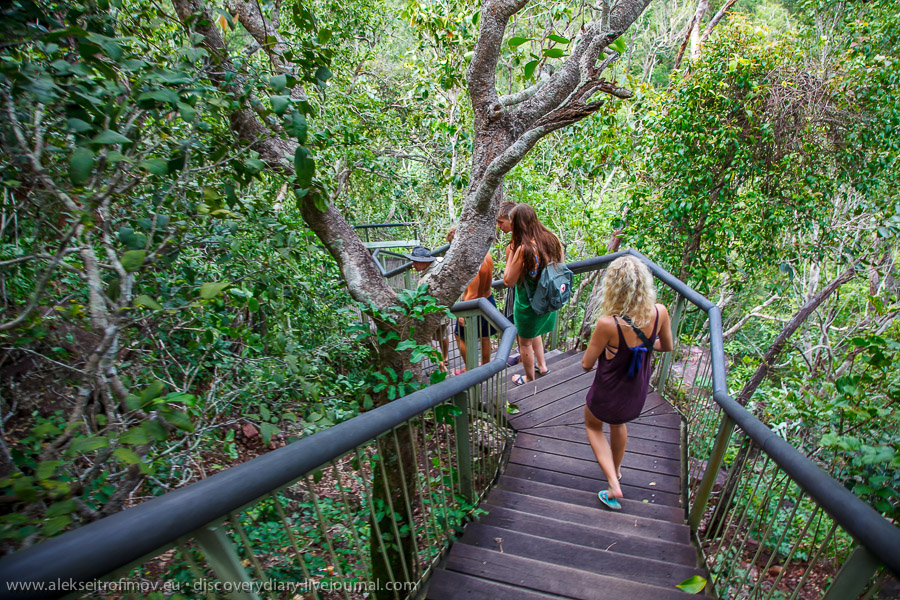 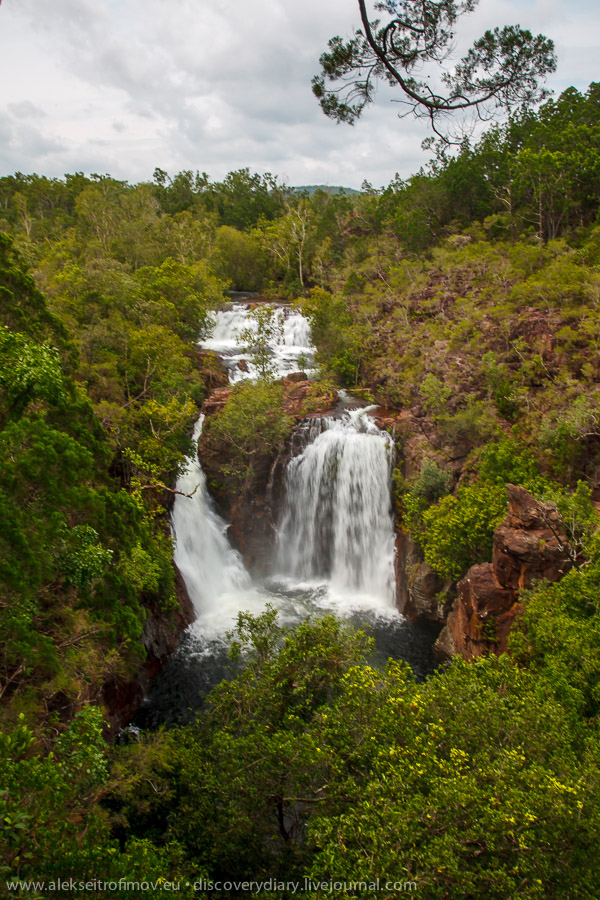 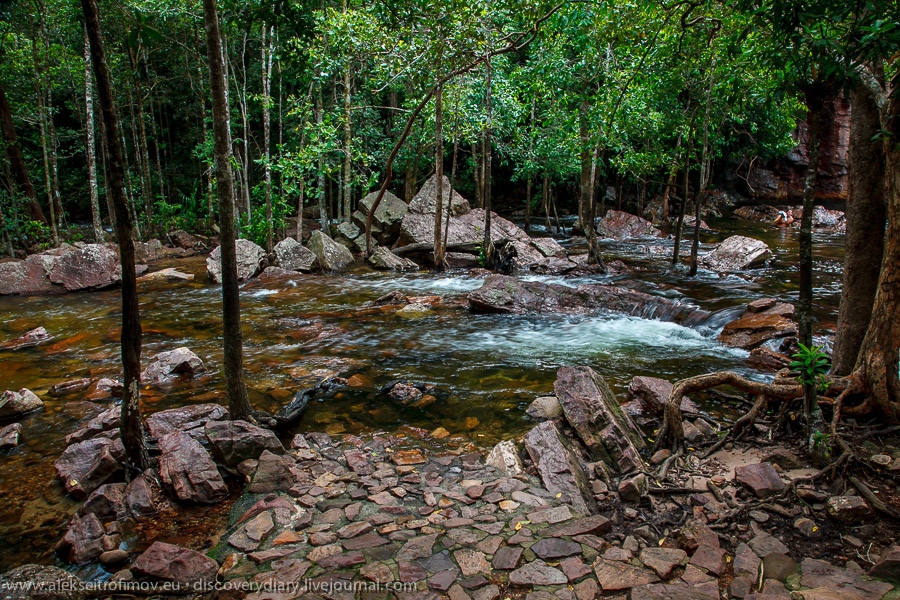 We could also swim in a number of them. This river is downstream from a mighty waterfall. As I was walking over this river, a leech bit my foot. At first I didn’t even realise what kind of black worm was attached to my foot between my fingers, but pretty quickly I reacted and even managed to take it out by pushing . For a while afterwards blood was seeping from the wound. I reported the incident to the guide and he insisted that while indeed it had been a leech, it is quite harmless. The leech puts some agent into the wound to prevent the blood from coagulating and so it’s normal that the blood will run for some minutes. The fellow travellers would ask me for a while afterwards if my foot was ok, even as I’d already forgotten about the incident. 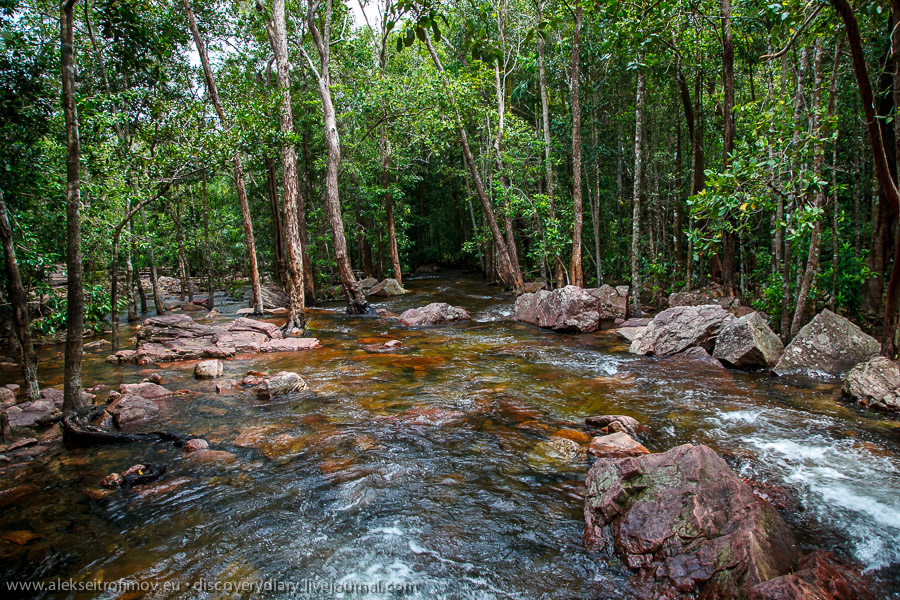 There is a strong current here, so it was not too easy to reach these stones in the middle with my camera. I put it in the backpack and so navigated the stream. 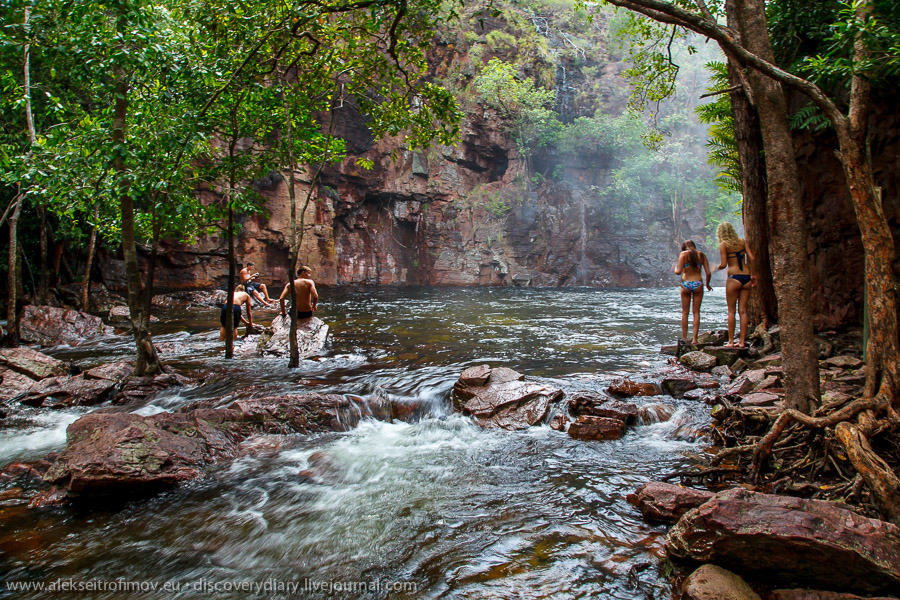 And this is the waterfall. I swam all the way to eat and felt the rushing water hit my head from above, which is not so easy to do as you have to fight the current. Our guide advised to dive and thus to avoid the current by swimming underwater, but with the contacts in my eyes I thought that was more difficult and so I just followed along the wall of the rock to the right, helping myself from time to time. It feels like a major achievement to finally reach the waterfall. 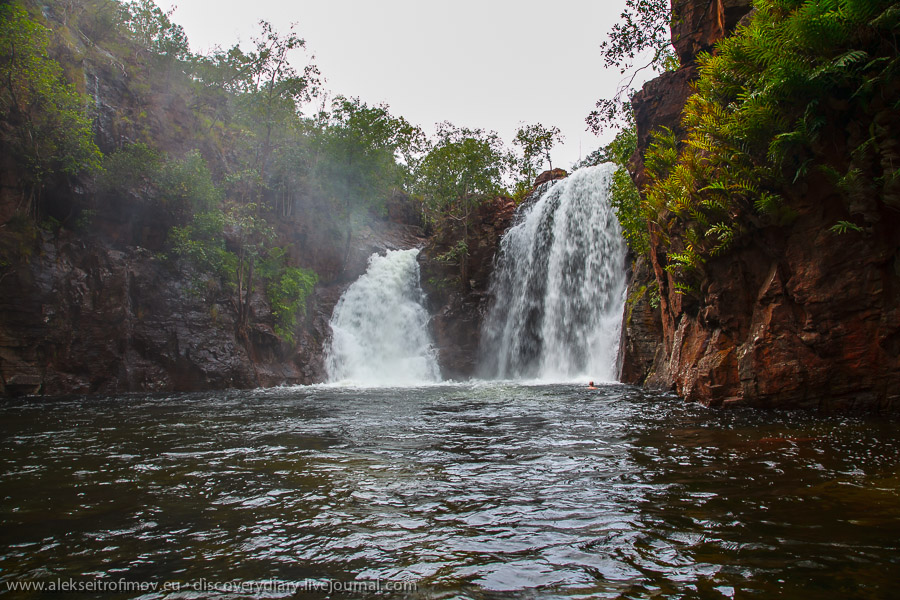 One thought on “Litchfield National Park”