I like capitals. They have a special energy that makes me feel good. In La Paz too I felt this energy. The formal (“constitutional”) capital is Sucre, but La Paz is the real capital of Bolivia. At the end of 19th century the silver mines of Potosí got exhausted and so the centre of economic strength moved from the centre of Bolivia back to North East. As a consequence, the seat of the government was moved to La Paz. As of today, the situation changed again: the economy is now strongest in the East, Santa Cruz (where I write this) is the largest city. However as the political control is still associated with the Altiplano to the West, the East is unhappy and wants autonomy or even independence. Evo Morales in that sense is squarely on the Altiplano side and is quite unpopular in the East.

La Paz means “peace”, the full name of the city is Nuestra Señora de La Paz, i.e. Our Lady of Peace. This name was elected by the founding Spaniards to commemorate the victory over the Indians and the supposed peace that was thus found. In truth though peace was sorely lacking in the history of La Paz – an endless procession of juntas, putsches and executions characterises it.

The geography of La Paz is ridiculous, grotesque. Of all the world cities, I can only think of Rio as equally striking in its geography – but where Rio is almost kitsch in its beauty, La Paz is gothic. It occupies a long valley sloping downwards, and so the difference of altitude between its different barrios ranges from 3900 to 3100. The poor live where it’s more tough to breathe, whereas the rich areas are further down. 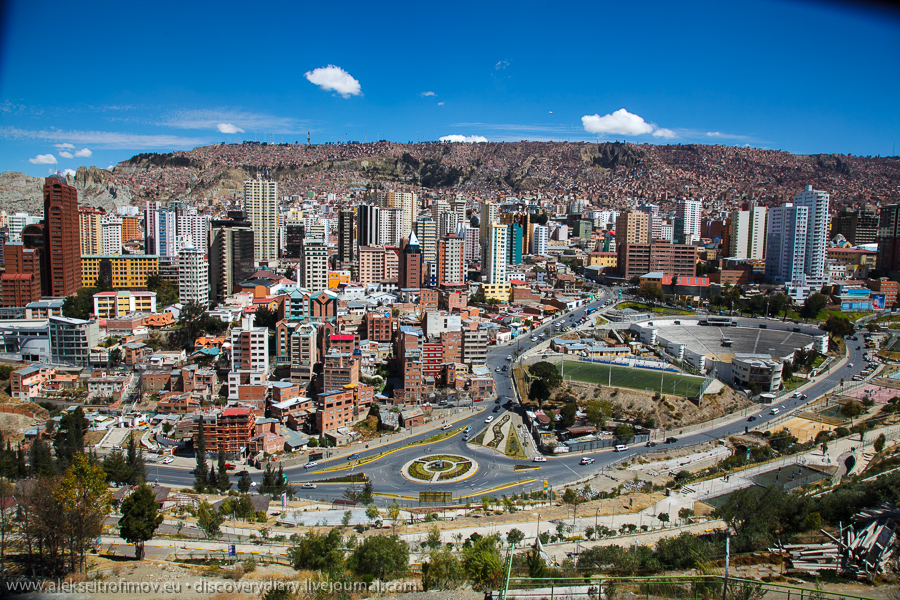 When you arrive in La Paz, this is how you see it first: 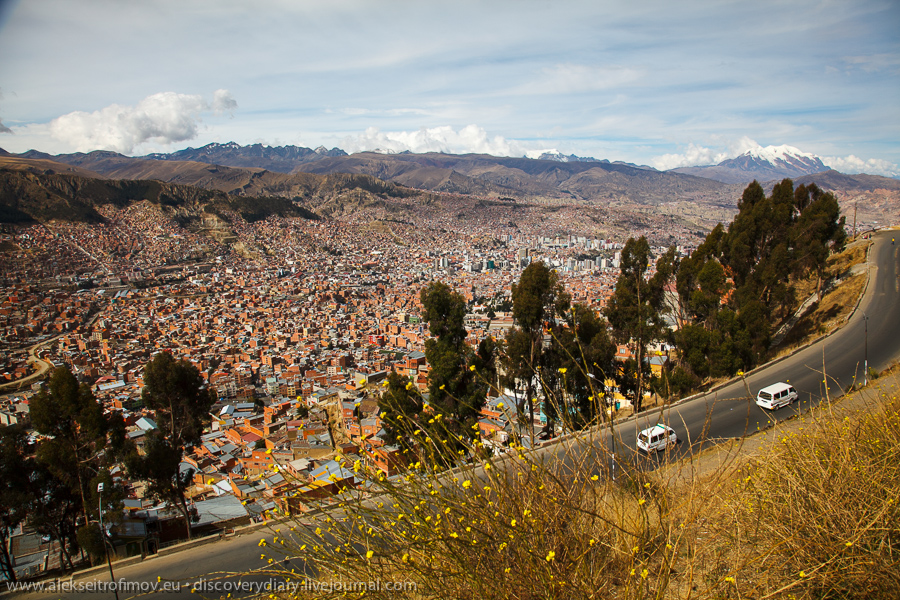 Mirador (viewpoint) Laikakota in the centre of La Paz is known as the place for romantic dates. One more view from there: 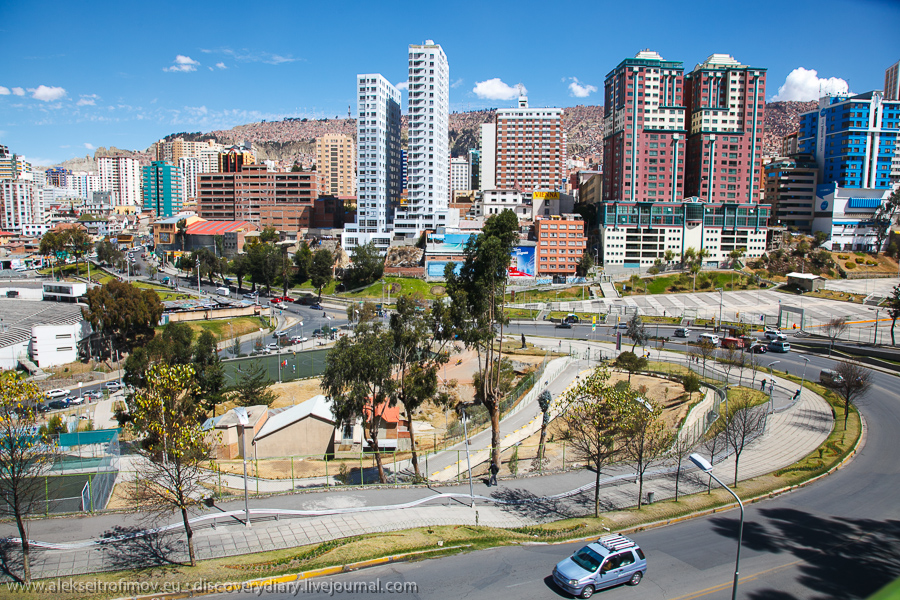 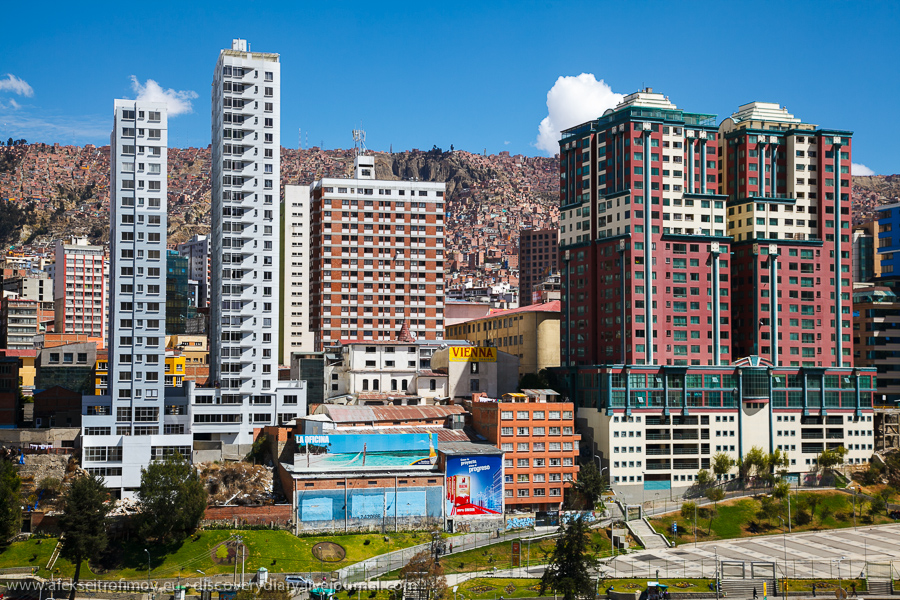 The lovers, as promised: 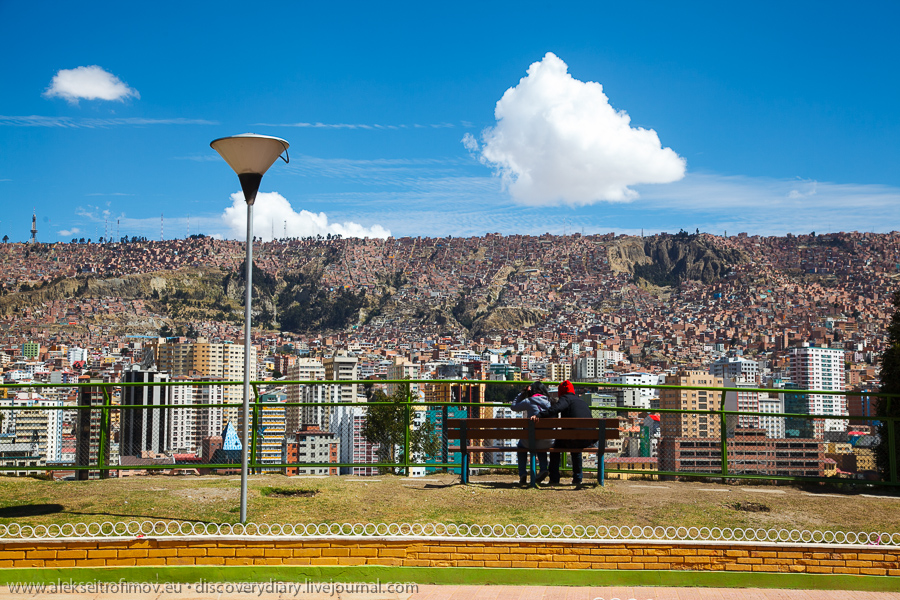 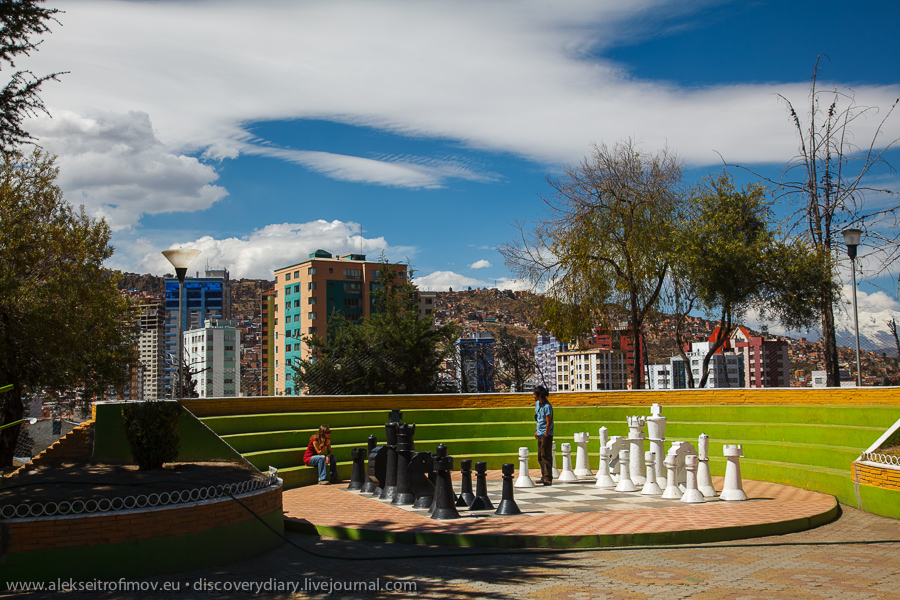 Not functioning, but still rather atmospheric Luna park in the centre: 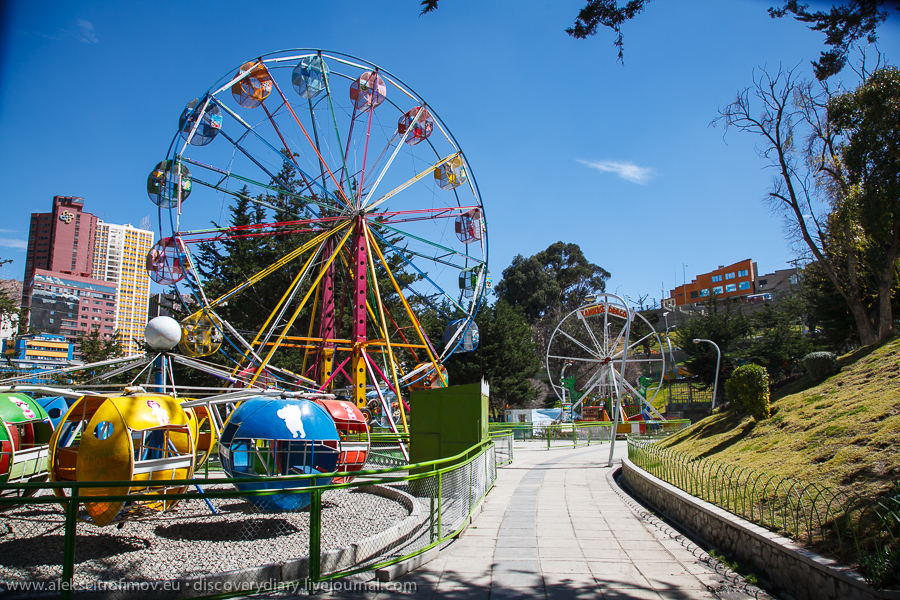 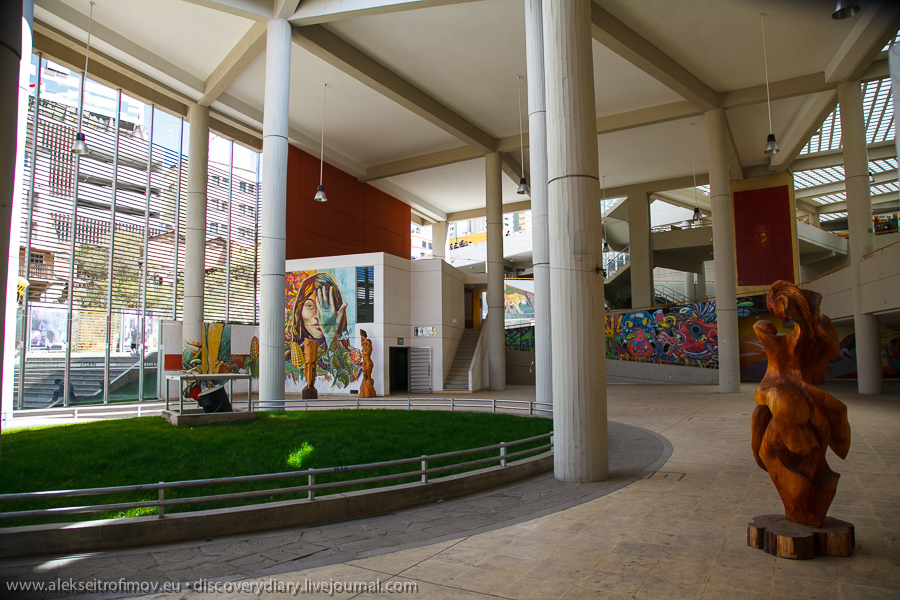 One more view from the suspended road leading to the mirador: 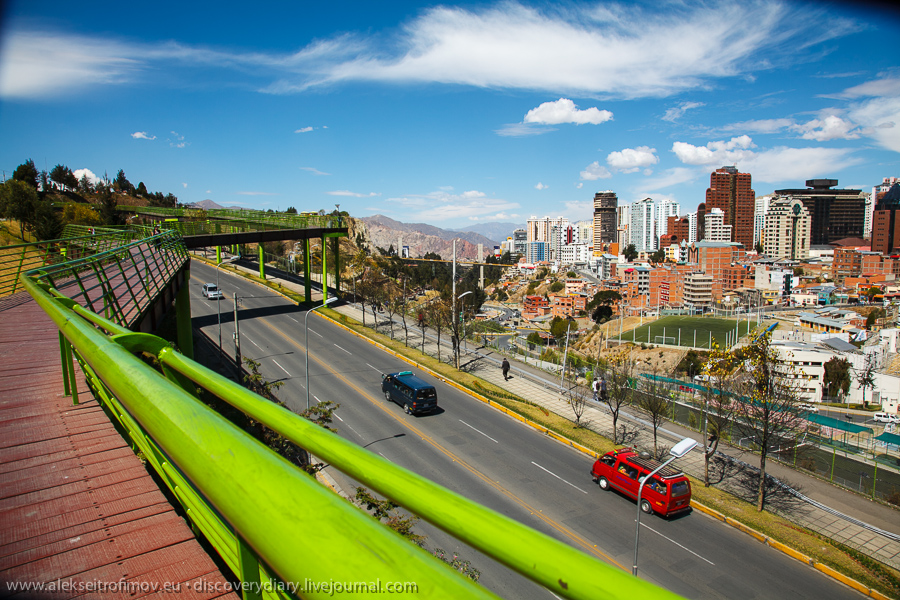 Many levels of La Paz: 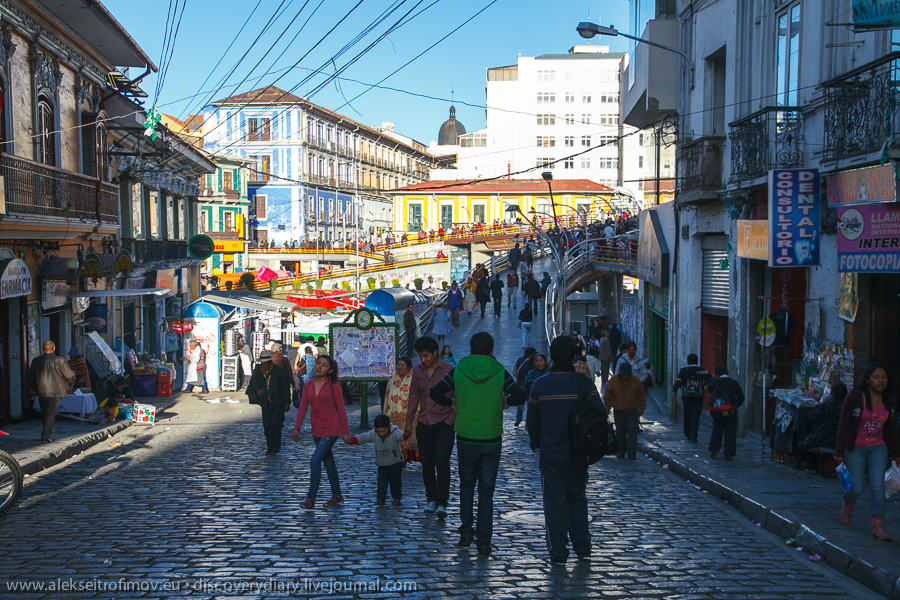 Poor areas of La Paz as seen from the sky: 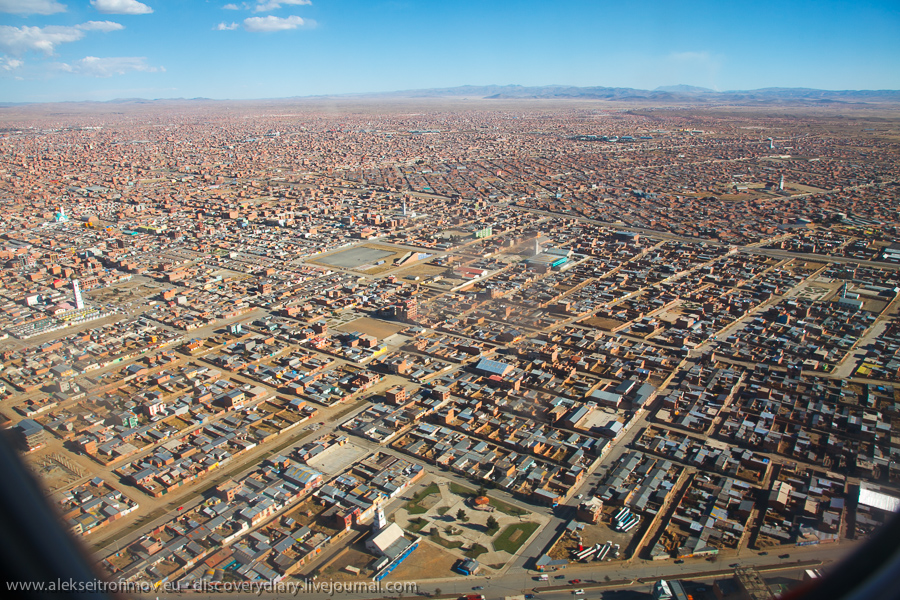 The Jaen Street, where the main tourist attraction of La Paz – 4 small museums – are located. These museums are quite fascinating as they expose the history of Bolivia which we Europeans barely know.

The history of some countries is fundamentally triumphal, whereas others have a history full of tragedy. Russia for one, although it sees itself a perpetual victim, can in fact boast a very uplifting, victorious history: Alexander I after all rode his horse all the way into Paris, Stalin died the Hitler-slayer, and Catherine the Great eternally beat the Turks. Poland’s history, on the other hand, is forever tragic: the sea-to-the-shining sea empire is lost in the sands of time, Vilnius and Lvov will never regain their Polishness and the Germans annihilated the beautiful Warsaw.

So is Bolivian history, tragic. It was here that the first rebellion sparked against imperial Spain in 19th century. The Spaniards managed to defeat that first rebellion, and only when the rest of the colonies rose did they eventually have to concede defeat on the whole continent. Alto Peru (Bolivia) turned out to be the last colony to acquire independence.

This was not the end of darkness for Bolivia though. In the series of wars in 19th and 20th century it lost almost half of its territory: Brazil, Chile and Paraguay annexed respectively Amazon basin, Atacama and Chaco. What hurts the most to this day is the loss of the access to the Pacific in the war with Chile towards the end of the 19th century. Even today it is taught in the Bolivian schools that the lost territory is Bolivian by right. Moreover, President Evo recently lodged a claim in the International Court in the Hague asking Chile to return the stolen land. The Court took up the case! And we’re waiting with interest for the resolution. Which might set a groundbreaking international precedent really. 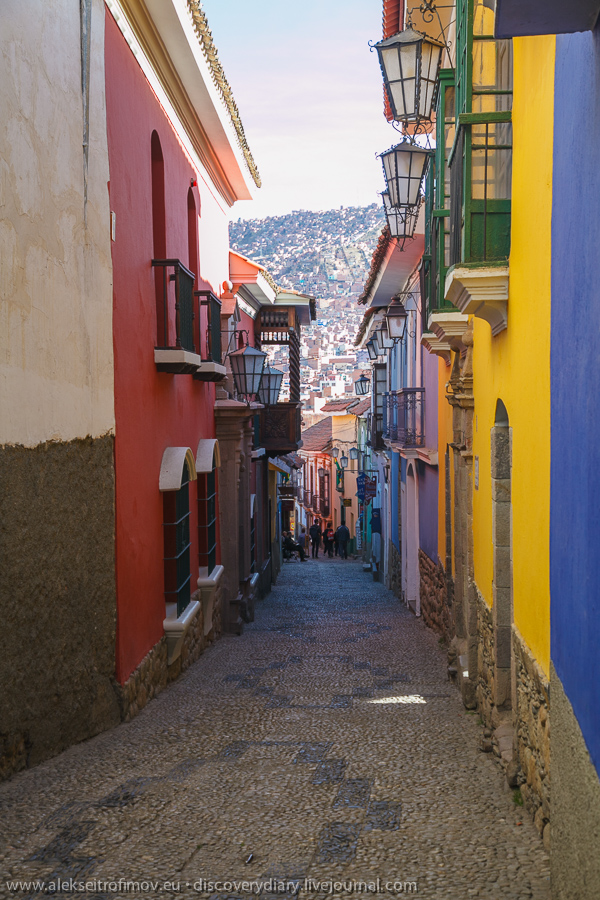 Another museum in Jaen street is the Musical Instruments Museum. I quite enjoyed the fact that in this museum in addition to the main exposition the visitor is given the opportunity to play some of the instruments. With great joy I beat the drums, played the ancient-looking fortepiano and some other unknown local devices. 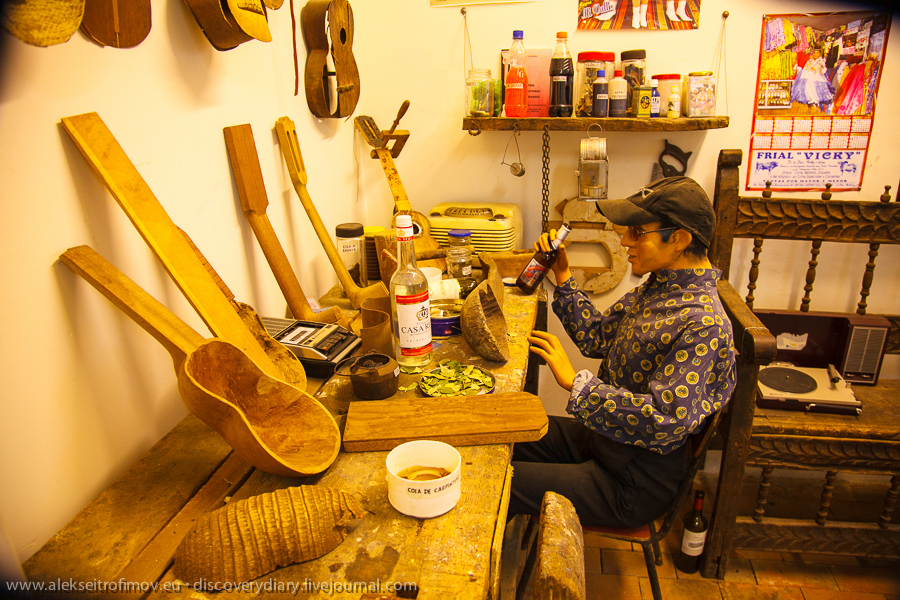 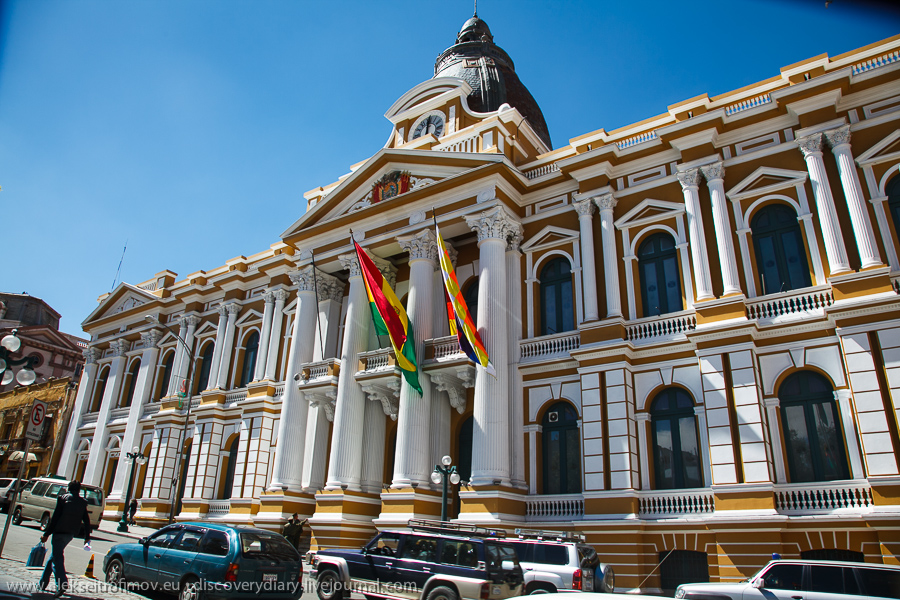 As is wont for a Latin American capital, the central squares often host various demonstrations. I witnessed one agitating for more self-rule for the indigenous tribes. The flag with the squares in the centre is Wiphala, the flag of the Aymara ethnic group. 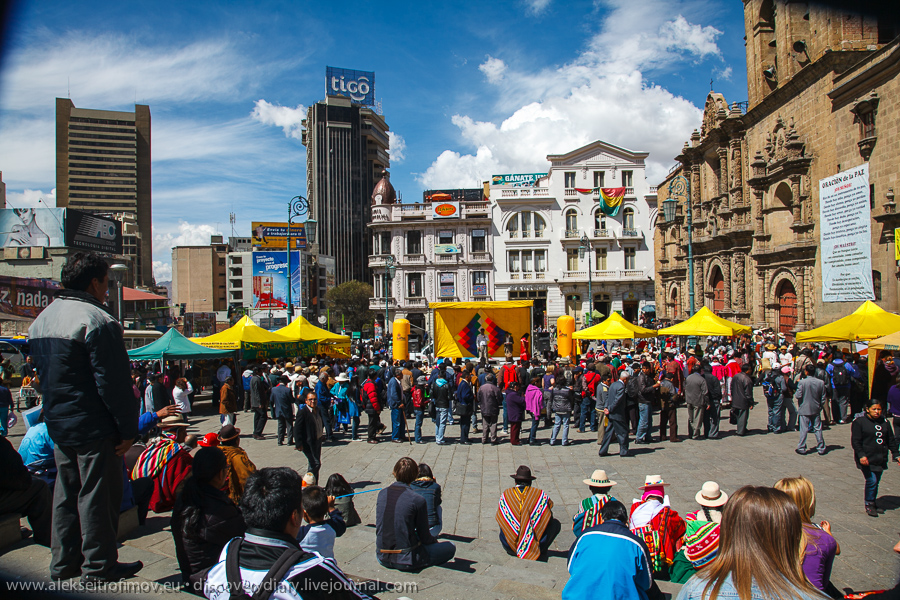 The stadium in the city centre: 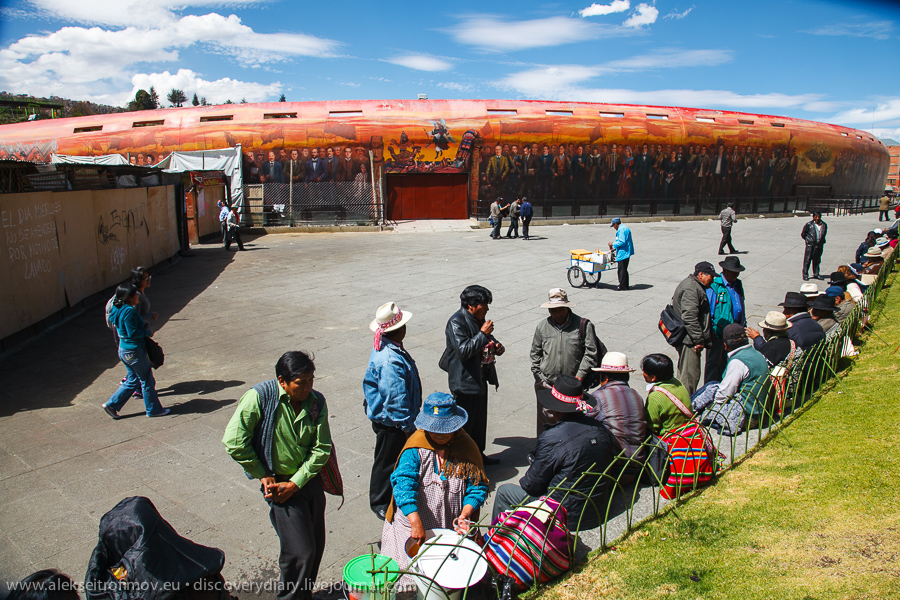 With some interesting personages painted on its walls: 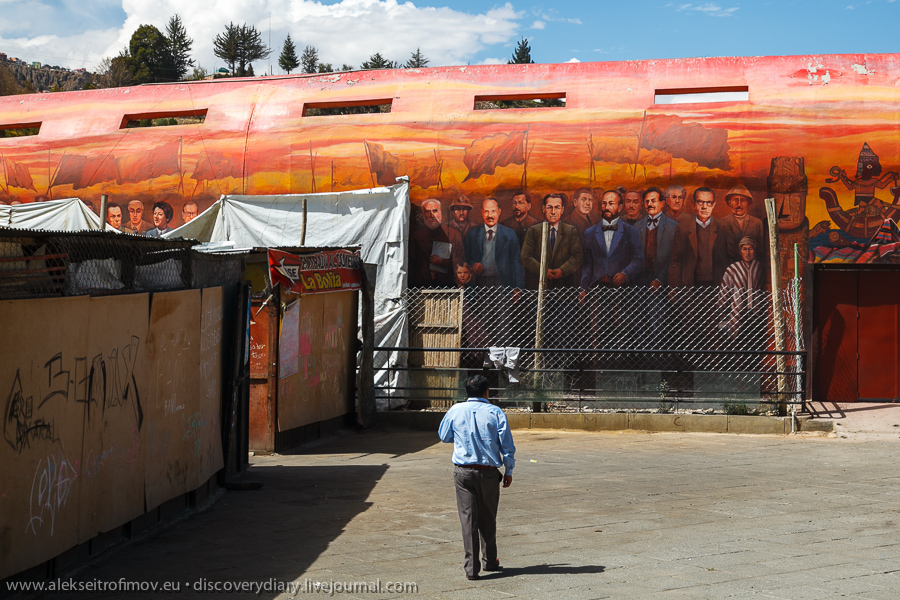 La Paz is famous for its many markets. The strangest of them all is the Witch Market, where all sorts of magical objects are sold. The stalls there are full of llama foetuses, which are seen as perfect sacrifices in all kinds of situations, for example when laying foundation for a new house. I opted not to photograph them. Below is the photo of a food market, but for me the real blessing was the electronics market. In La Paz I finally regained the iPhone cable I had lost in Lima. And so I reconnected to the world, and to some special ones in it. 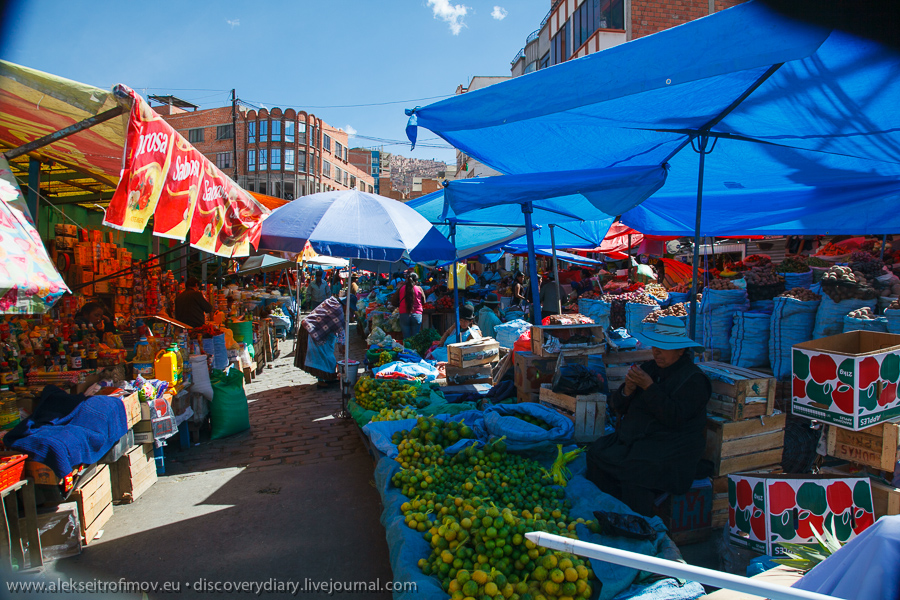 The popular local drink, sold everywhere, which is made out of peach. 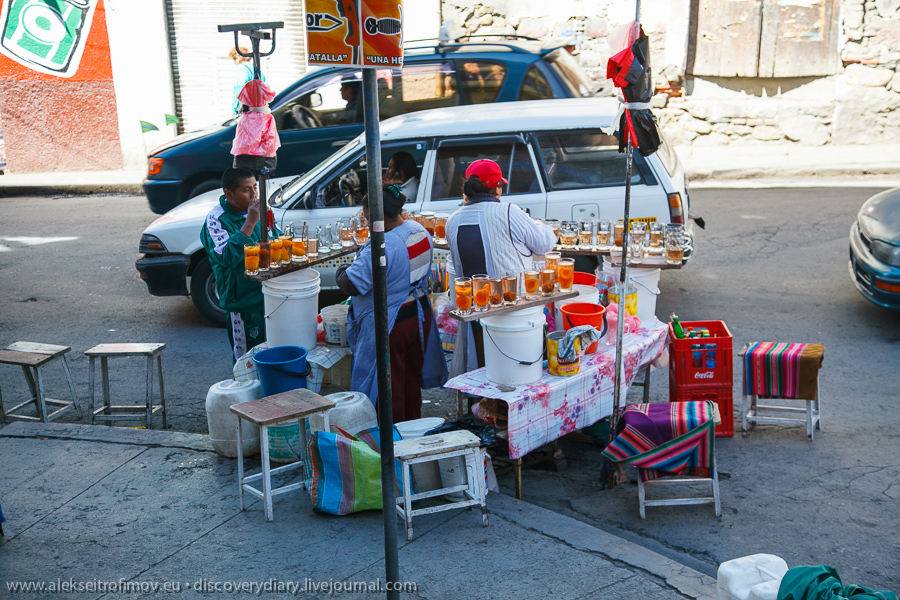 La Paz surprised me with a most fascinating encounter. Walking down the street, I suddenly heard somebody say “Aleksei Trofimov” right behind me. I had no time to even get surprised, turned around and saw the French couple I had met on the Colca Canyon tour some weeks prior. Together with their wonderful local friend Carla we all went to have lunch in Zona Sur. Zona Sur is like a separate universe from La Paz proper, reminding more of an American suburb. The Bolivian dishes were great though, as was the company. 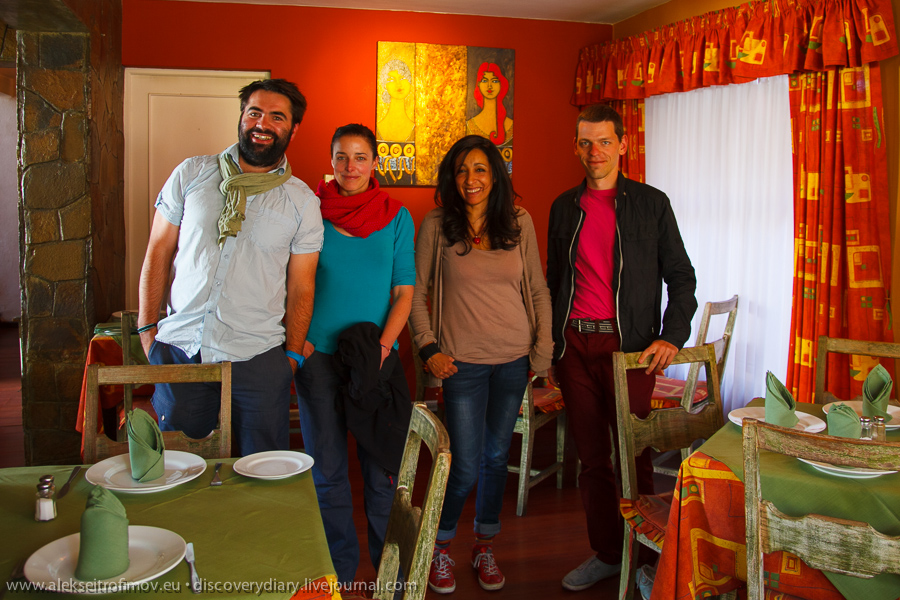 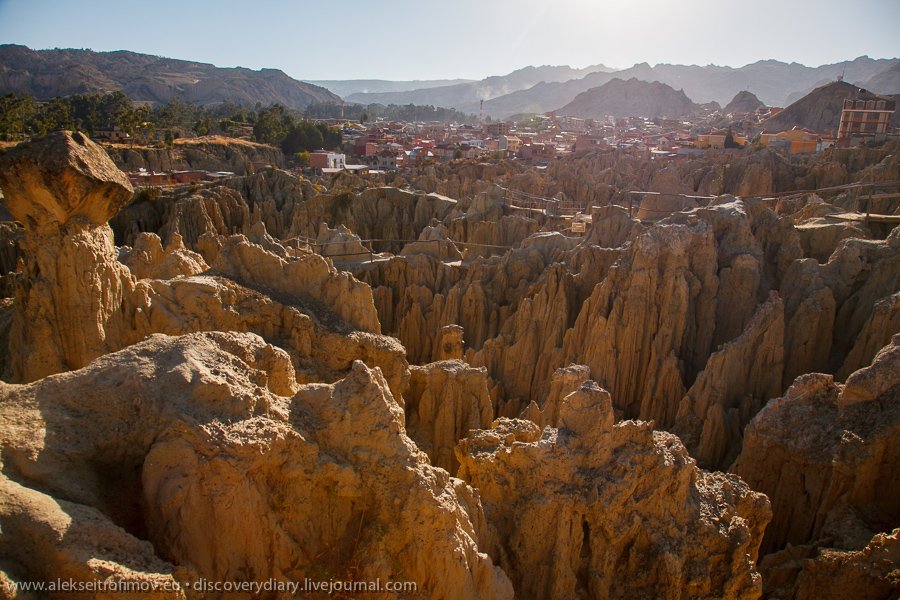 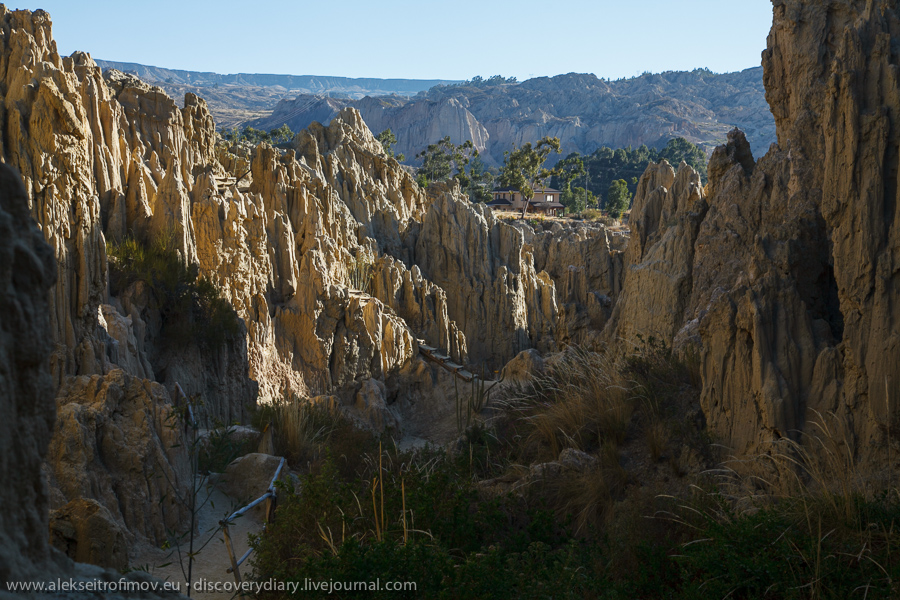 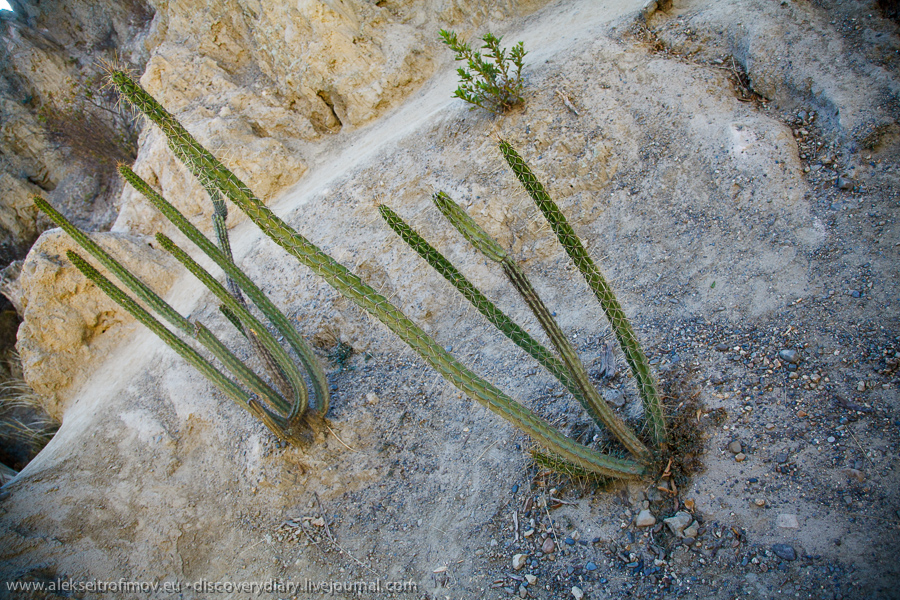