We set off for Waitomo the next day. Our first stop was the Karangahake gorge, where we took a walk for about an hour on a narrow path winding up and down the side of the gorge. The walk starts from crossing this bridge: 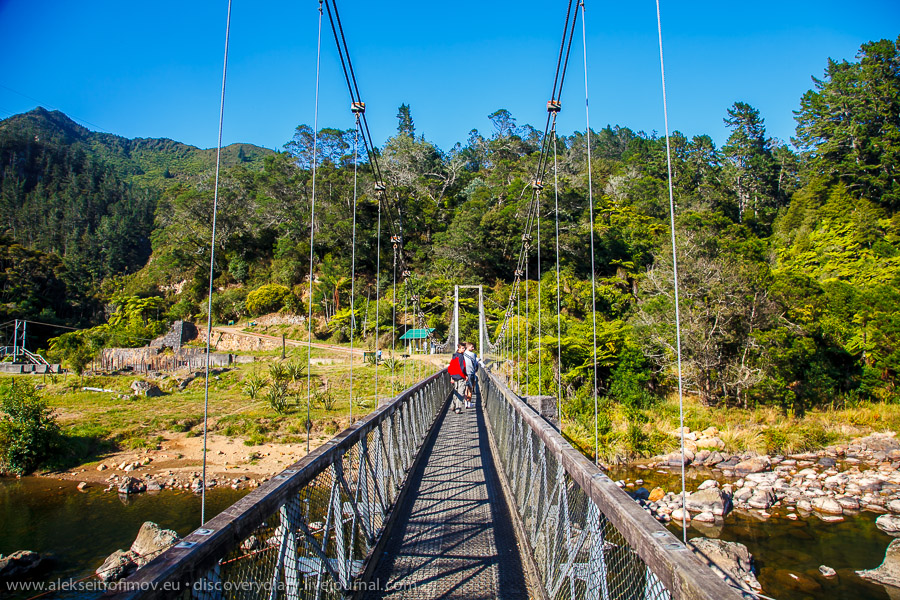 How’s that for a view? 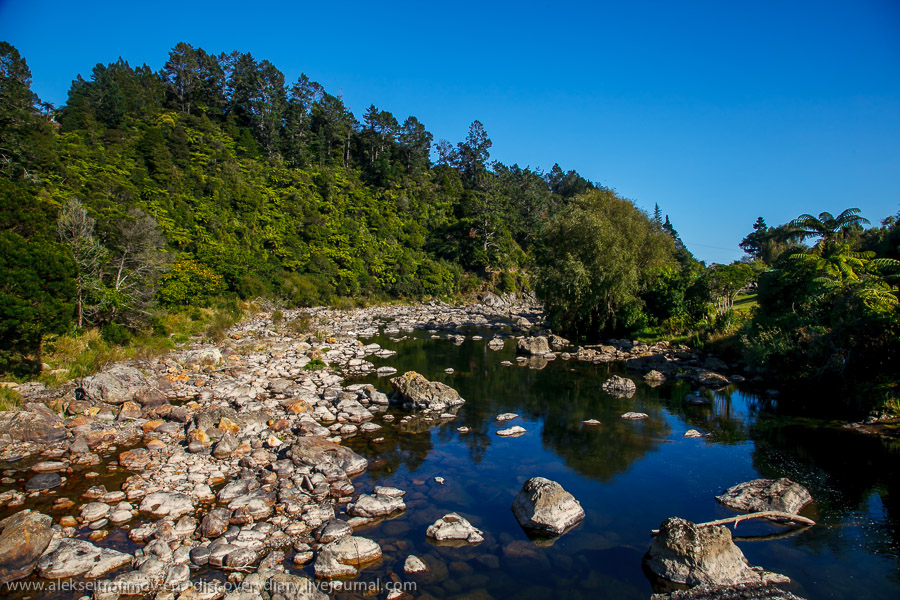 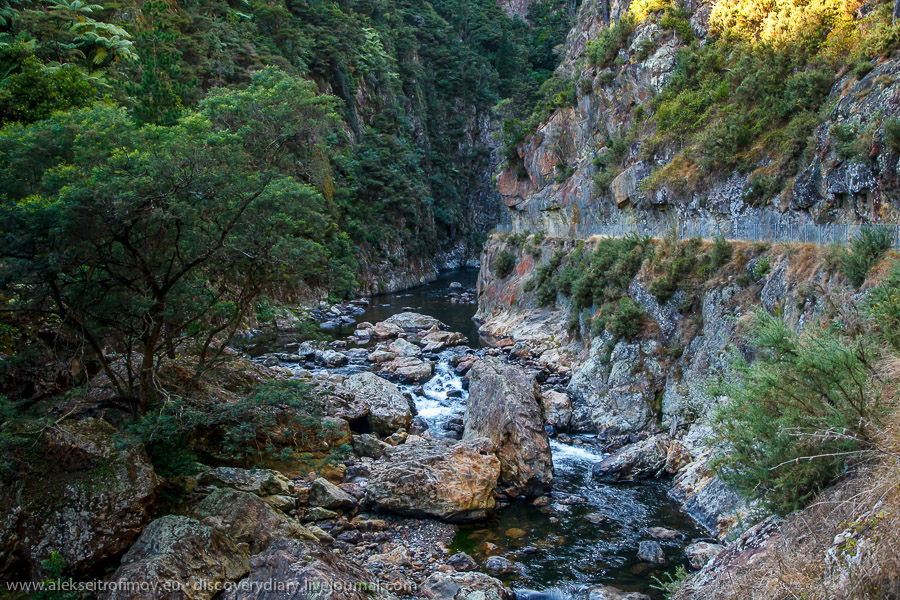 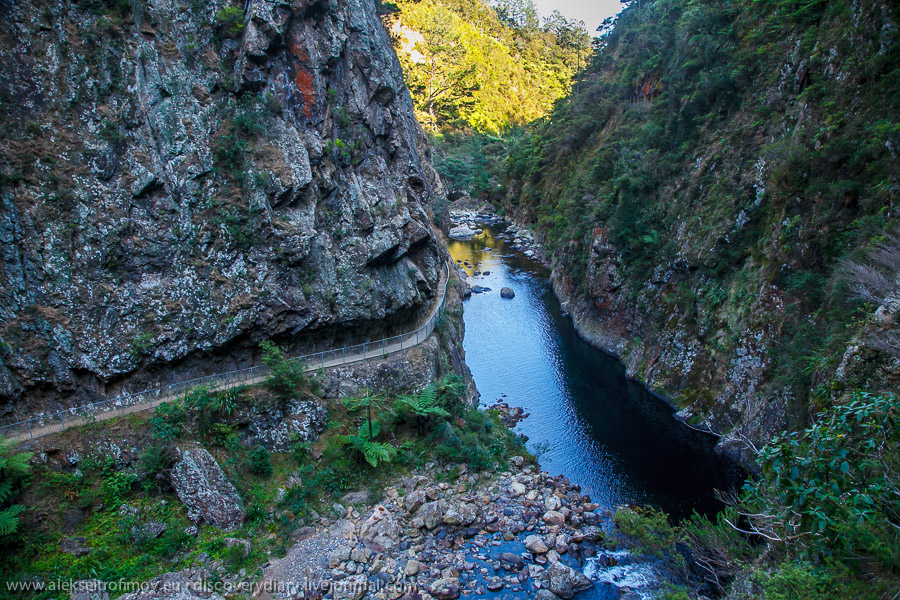 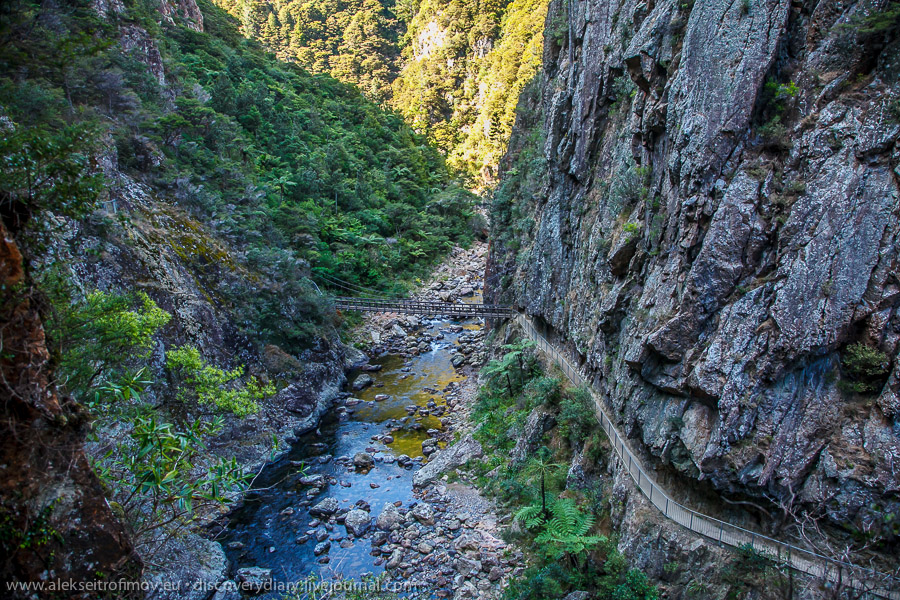 Afterwards we stopped in Paeroa – “world famous in New Zealand” for the national drink, L&P – lemon & paeroa – which was invented here. A bit like fanta to my taste!

Waitomo was next. Clearly without photos it’s as if the event never took place, but I have no photos of blackwater rafting in the caves. We agreed to share photos with my fellow travellers and afterwards we lost track of each other. I will describe my experiences using some photos found on the internet.

In maori Waitomo is a combination of two words, wai and tomo, meaning water and hole. Indeed the ground below this little places is filled with water caverns and corridors. The local company specialising in cave activities offers a whole list of various combos. I opted for the “Black Abyss”, a five hour long journey underground, featuring the so-called blackwater rafting – a locally invented neologism, I suspect – in contrast to the usual whitewater rafting. It is blackwater because it takes place in the darkness underground.

In the activity centre in Waitomo we put on our wetsuits and specials shoes. A minivan takes us to the entrance of the cave.

Abseiling
The trip starts with abseiling. First we are given a training on a gentle slope on how to attach ourselves to the ropes lining the paths in the cave as well as how to actually descend the vertical rope. The most important point is how to hold the rope that attaches you and how to correctly release and block the rope when you slide down on it. Doing this wrong may result in an injury to your hand or worse.

Suddenly the time comes to actually descend into the cave. You do it via a dark vertical shaft. Basically you stand on a platform, the instructor checks the equipment one last time, you hang above the shaft, he says “Go!” and off you go into the darkness by releasing the block on the rope. Of course you can control the speed of your descend and you can pause it too. Still to do that in the darkness of a 35-metre high shaft is quite thrilling. At times you can touch or hold on to the walls of the shaft, at times it is too wide and you go down on the rope alone. Finally you notice a lamp at the bottom. Looks something like this (not my photo): Caving
Caving basically refers to walking around in underground caves. At times you creep in narrow passages 1 metre wide and high. If you are not claustrophobic, nothing scary there.

Flying fox
The next part of the program is a zipline in the dark. To make it more fun, they ask everyone to switch off the lights. As the first person in our group went down the zipline, suddenly we heard a horrible blast. The instructor though kept perfect calm. “Next!” The next guy goes and again a blast. Then we realise that they are making these sounds to add an entertaining element. Probably by deflating a tire, though they never said how exactly it was achieved. Looks something like this (we actually ziplined in complete darkness): Cave tubing (black water rafting)
The main item on the list – blackwater rafting. They give you a tire and ask you to jump several metres down from a ridge into the water. You have to jump in such a way that the tire lands on the surface of the water, and you land above the tire. It’s all good except that the water is pretty cold. As we all find ourselves in the water with our tires, we start drifting down the current. Here is how it looks (again, photo is not mine):

Glow worms
At a certain moment the instructors switch off all lights… we lie down on our tires in the water and look up. And the ceiling of the cave – like a starry night sky – is covered in small lights. These are glow worms, particular cave dwellers. Their glow attracts small insects. In fact the worm extends way down from the point where it’s attached to the cave which gives out light. The body of the worm is covered in digestive glue-like juice. The insects crash into the body and are literally digested by the worm. We approached some worms and could see them in detail.

Jumps
During these five hours you dive into the cold water over and over again – with tires and without, from a high ridge and from low. No way around. Later I realised that after repeatedly diving into the cold cave water like this, you become rather nonchalant about diving into any water really – pools, lakes and whatever.

Climbing
The underground journey is capped off by climbing a cave waterfall. At first you think it’s impossible – you look up into a hole in the cave from which the water is gushing. What do you mean climb up there? Then the instructor points to the first tiny opening for your foot, second, and step by step you realise that climbing up is actually possible with a little effort. There are actually two waterfalls you have to pass on the way up. Then a short underground corridor and you finally see the light of the day. I was actually the first to get out. I found abseiling and jumping in a tire rather stressful, once that was done, I felt rejuvenated and ready for more. I was dancing non stop down there – to keep the blood flowing in the cold water.