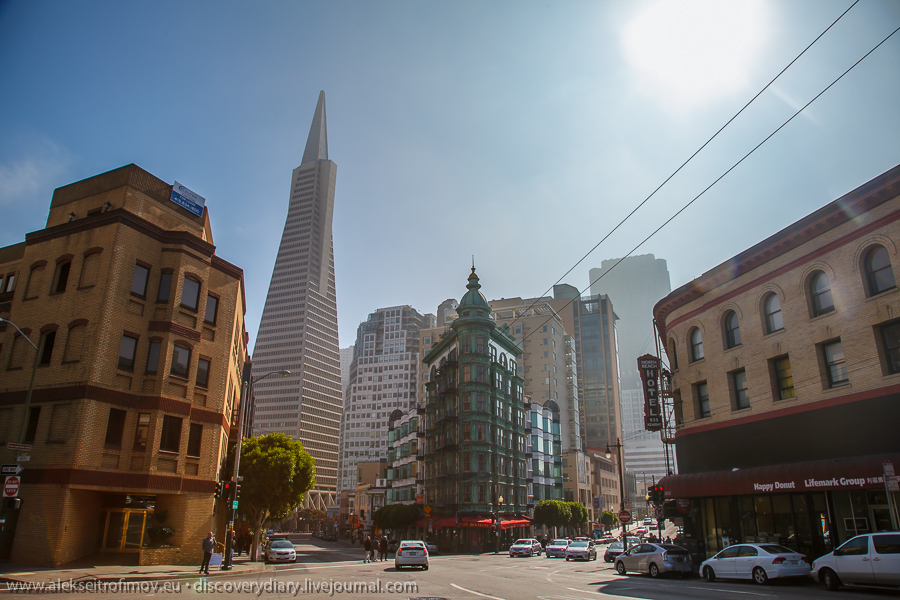 I must say that after Latin America the States were a real culture shock for me. So much so that for the first couple of days I was walking around in a rather serious depression. I was disgusted by the all-dominant consumer society. After the relative poverty of Latin America, where even the richest country, Chile, makes you meet a fair amount of people in need every day, the explosion of pointless idiotic consumption which is America repulses you. I am not exaggerating. Look at this request, without a hint of irony: 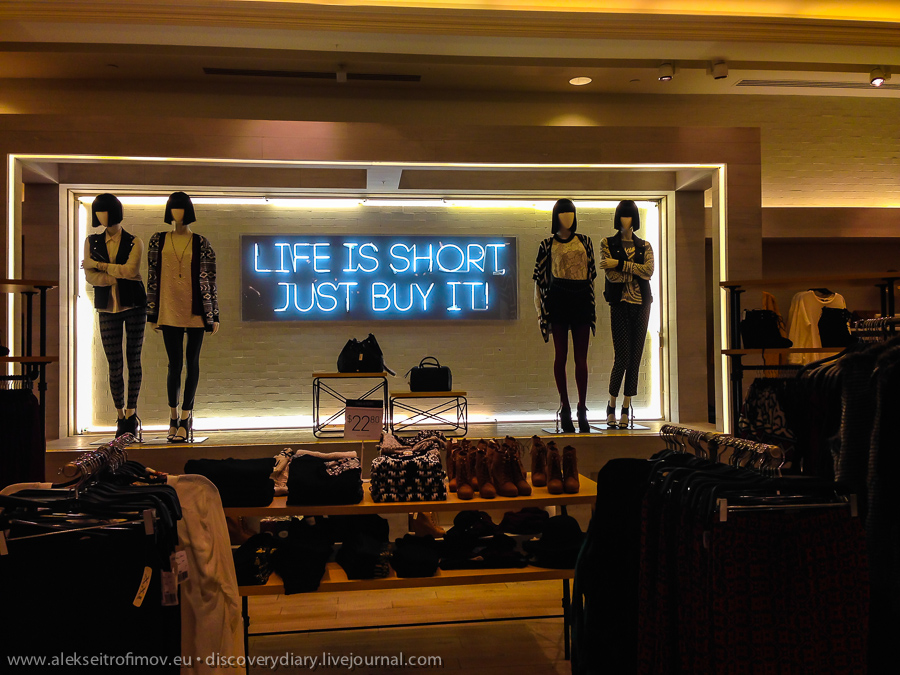 America is no place for introverts. It puts you under a ceaseless sensory attack from which there is nowhere to hide.

So here are my gripes with the States, point by point:

1. Terrible food. Everything is served/sold in huge portions which are impossible to consume in one go. In addition it is all over seasoned, over salted, over sweetened, over treated with some unidentifiable food additives. Even in “healthy food” shops it is impossible to get simple plain food: plain meat, plain salad, plain bread. There are no such products in the States. My stomach went on strike for the duration of my stay. I have a theory that simply my oversensitive body cannot stand GMO that is sent down stream to all the American foodstuffs by the ever-loving Monsanto.

2. The coffee. The coffee in Starbucks is a burnt out mixture of acids. Its main objective is to burn your stomach filling you with milk calories in the process. After two such lattes I swore never to drink coffee in Starbucks again. I must say I did regularly visit it anyway, as it serves as a sort of a wifi station for the local populace. It is always full of laptop-wielding geeky-looking individuals and you must literally run to occupy a vacant spot. Overall you can forget about proper latte in America. Drink water.

3. Overabundance of signals, advertising, pseudo information, most of which is either entirely void of sense, or has no relation to you, or just tries to sell you something you don’t need. You hear non-stop announcements in every shop, the pre-recorded voice demands that you buy, buy, buy on every escalator, even when withdrawing cash from an ATM every operation is delayed by the ads shown while ATM is “processing your request”.

4. Generally extreme noise level everywhere. Even in a park you cannot find a quiet spot. The level noise in the hotels is incredible. All over the world the first thing I do upon entering a hotel room is switch off the fridge (I never need it so for me it’s just a noise-making device). In America the fridges were particularly noisy, like small ancient cars, and were often placed in special niches from where it was hard to move them out in order to unplug. Absurd.

5. An overwhelming amount of options and choices in everything. People (“consumers”) are spending inordinate amounts of time choosing between those options and then specifying to the salesperson what exactly it is that they want, as if it makes any difference. Well for them it obviously does. More than once I would stand behind some consumer and shake my head in disbelief at the elaborate emptiness of his or her request. All these choices create an illusion of being in control of your life.

6. A bizarre relationship with personal space. When you walk around downtown SF at lunchtime, with some bewilderment you observe people in expensive suits eating sandwiches sitting on a sidewalk or on a stone bench next to their skyscraper. In a restaurant if you are alone, invariably you are sat at the bar facing the barman. At some point it started to drive me mad: first, it’s inconvenient to sit and especially to write / type; secondly, actually I’ve no desire for forced socialisation with a guy I’ve never met before and will never meet again, no matter how professionally friendly. So from then on I insisted (against some resistance) that they put me at a proper table.

7. Overcontrolling attitude to everything. Starting from restaurants – you cannot just sit at a free table, no, you’ve got to wait for the client service to put you where they see fit. But this manifests in everything. In an airport you cannot make a step without being told that in fact you need to go this way or that. I wanted to buy contact lenses. In Belgium it is an elementary operation, you just go to an optics shop and buy what you need. Not so in the land of the free and the brave! Contact lenses cannot be sold without a recent (!) prescription. Of course you can get a prescription, by means of an eye exam, paying an unknown (but certainly large) amount of dollars. I declined this kindest of offers as I had just recently had an eye exam in Argentina, for free.

8. Central areas of cities are basically a rubbish bin full of asocial elements and the homeless. In San Francisco right in front of the famous City Hall, where the first gay marriages took place in the framework of the civil disobedience campaign led by the major, there are broad boulevards full of sleeping, drinking, fighting asocial looking persons, most of them unfortunately black. I was walking among them and tried to get my head around the fact that in this society of unbridled consumption there are such huge and visible groups entirely outside of the mainstream society. Like a page from a 20th century sci-fi novel about the anti utopian future. Only this is not the future, this is the present.

Of course it is not all bad in San Francisco and Los Angeles. I visited a number of fascinating places and got a few lucky breaks. I was particularly lucky with the weather – ­indeed it was the best time to visit SF, usually it is covered with fog and rain, but while I was there it was sunny almost all the time. But I won’t describe all this in great detail, as I’m sure the reader has either been there or has read lots of standard tourist attraction descriptions about these places. Still, some obligatory photos. San Francisco: 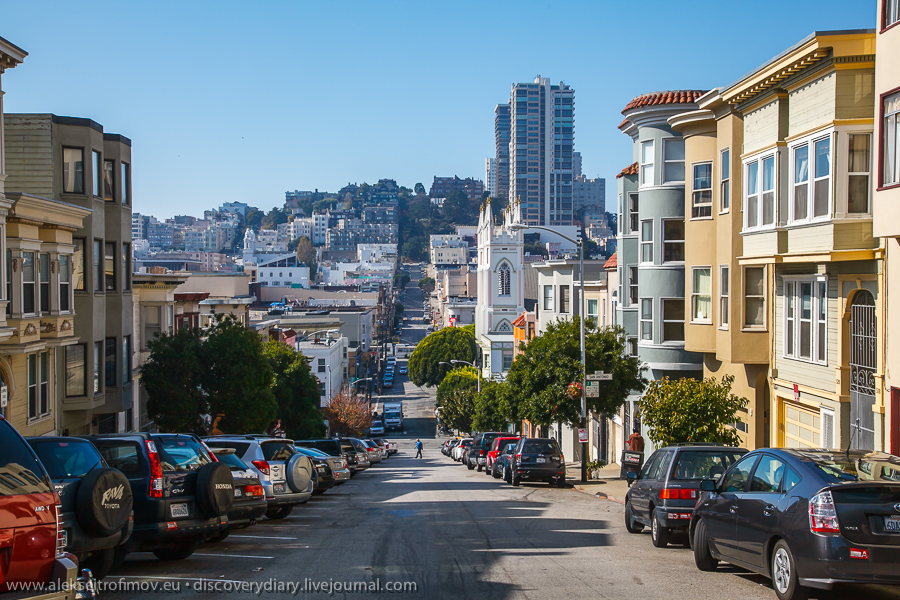 Central SF from the Coit Tower: 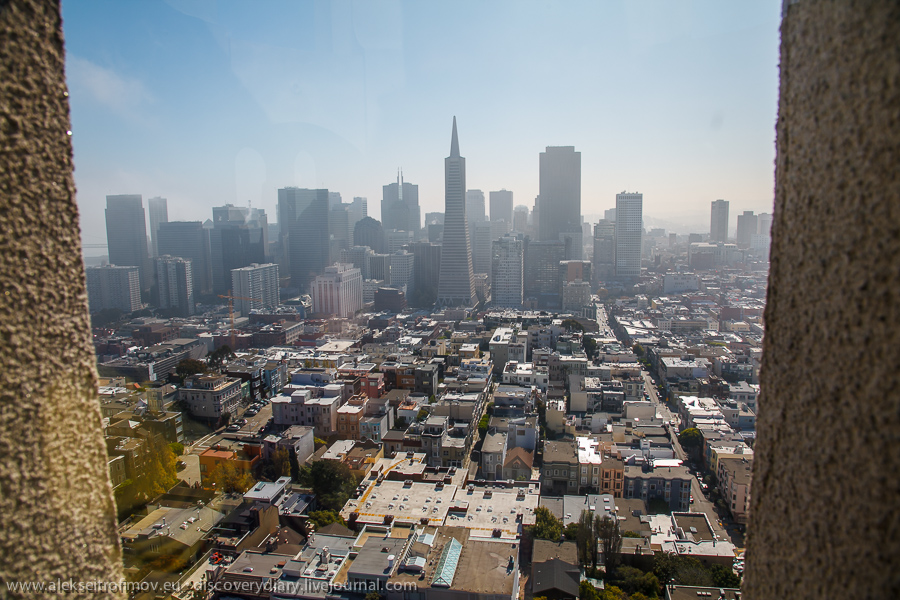 The piers which are considered the main tourist attraction here. They are full of aimlessly wandering tourists, stocking up on souvenirs and consuming local speciality clam chowder: 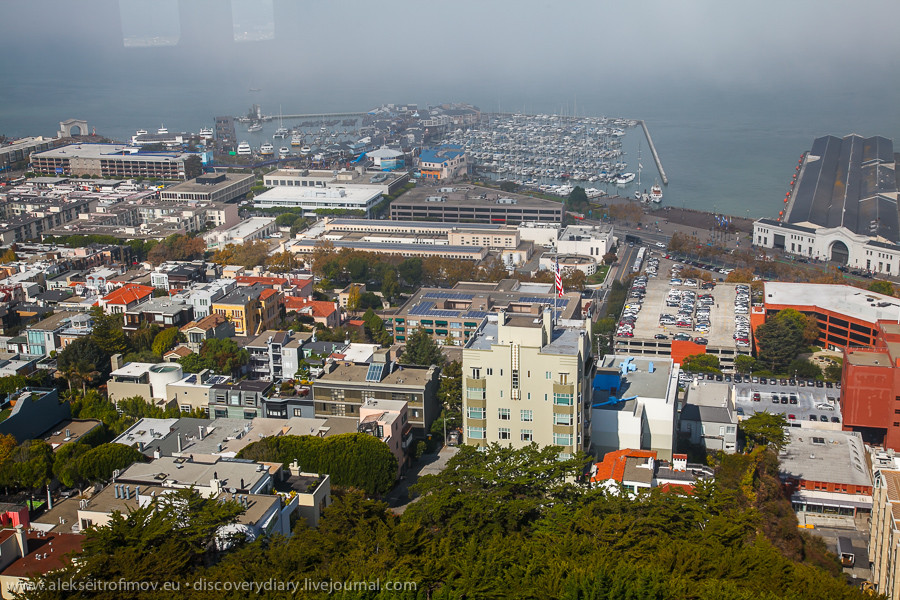 The view of the Alcatraz island, which once housed the most famous prison in the US. I did not go there (apparently 90% of the locals have never been there, however every tourist must!) 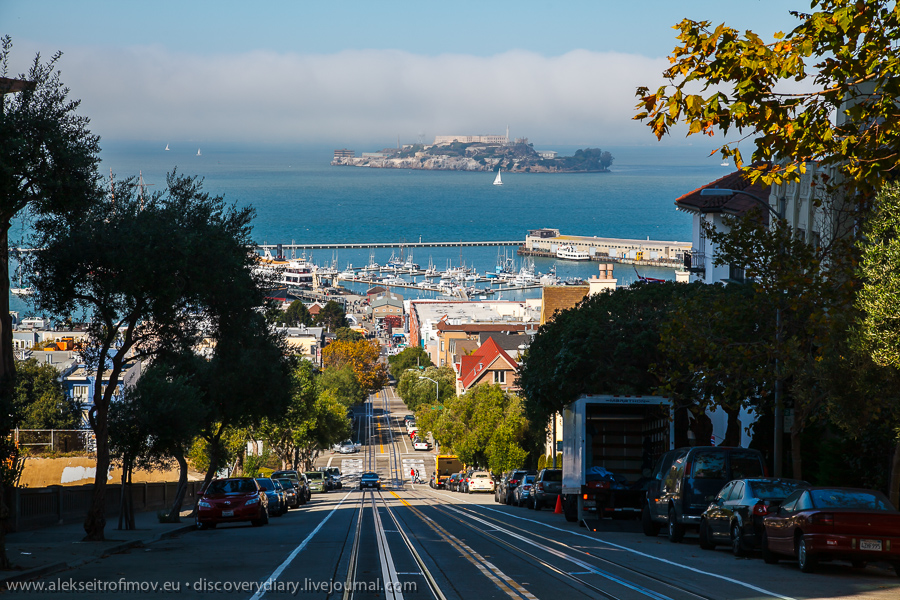 The magnificent panorama of SF from the Twin Peaks (no relation to the series). Twin Peaks separate SF from the Pacific and create a special microclimate in the resulting bowl (mostly fog and rain). 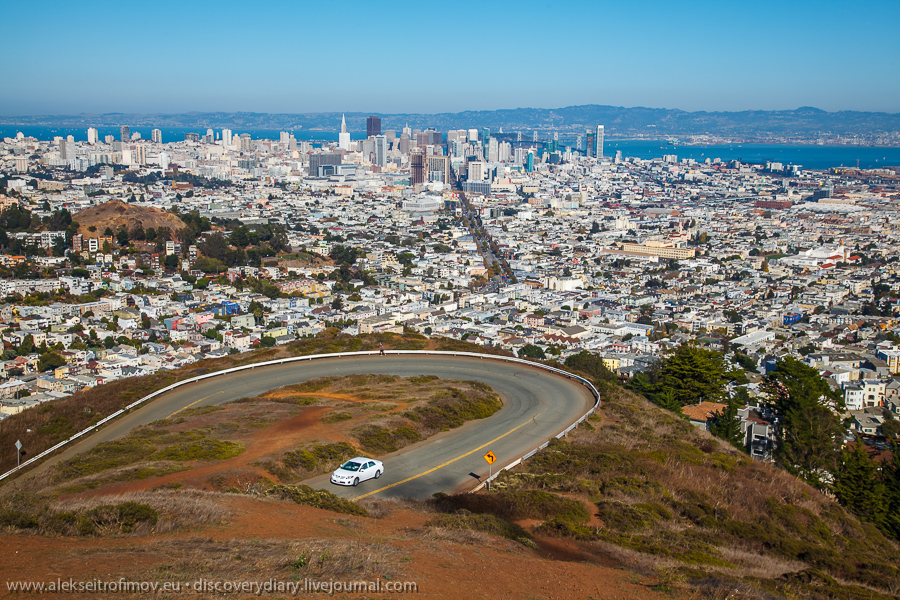 The area of Haight Ashbury, literally the crossing of Haight and Ashbury streets. The centre of counter culture in the sixties, today it is simply a long street full of rather absurdly looking hippie parafenalia shops as well as foul smelling second hand parlours. 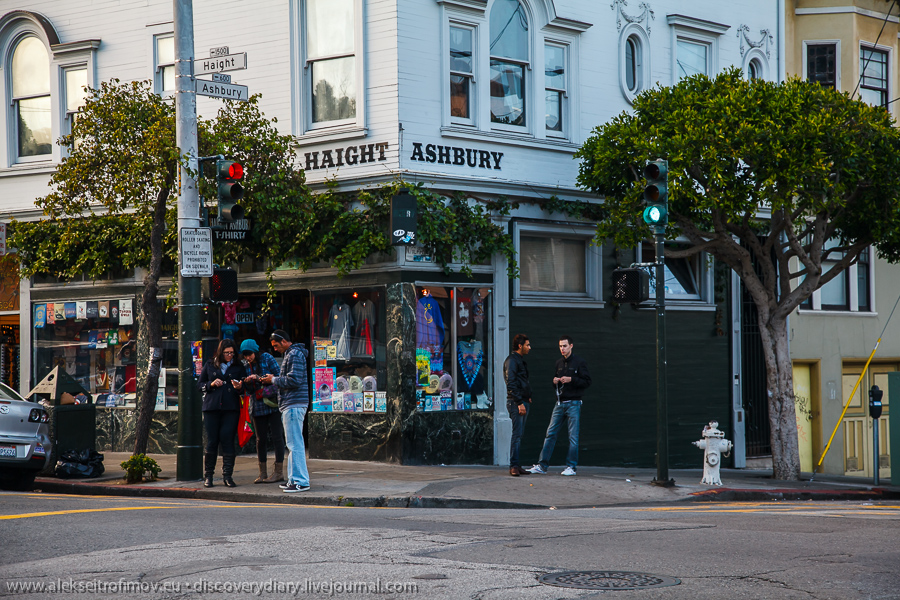 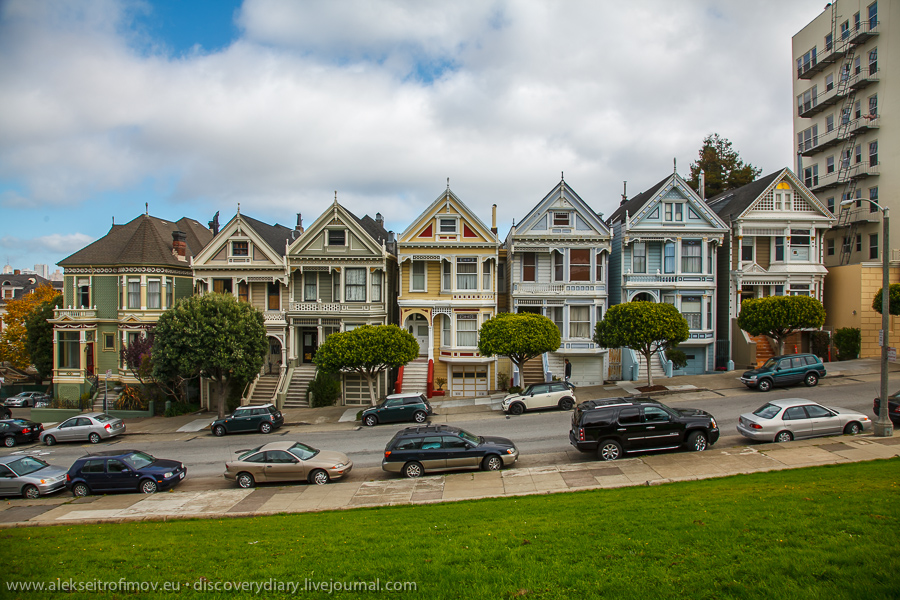 The Castro – ­the gay central of San Francisco, if not the world. The huge rainbow flag graces the Harvey Milk square, named after the first openly gay person elected to the City Council in the seventies. 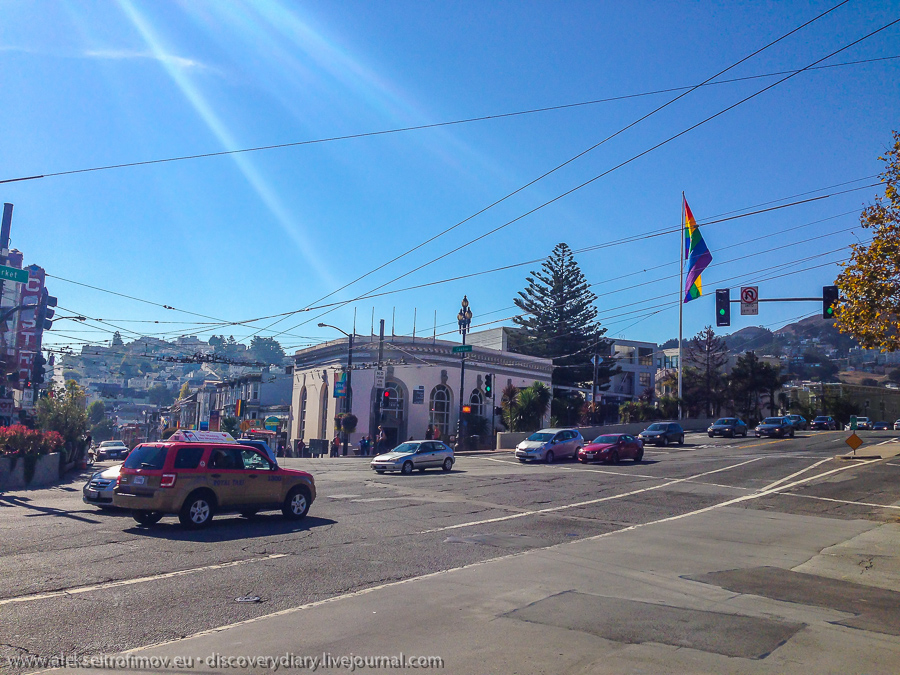 And some Los Angeles photos. 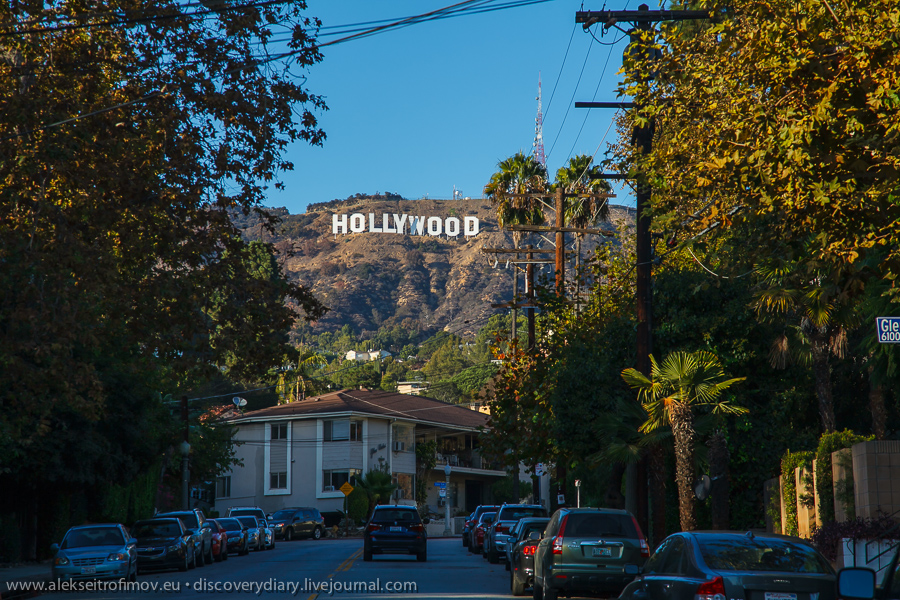 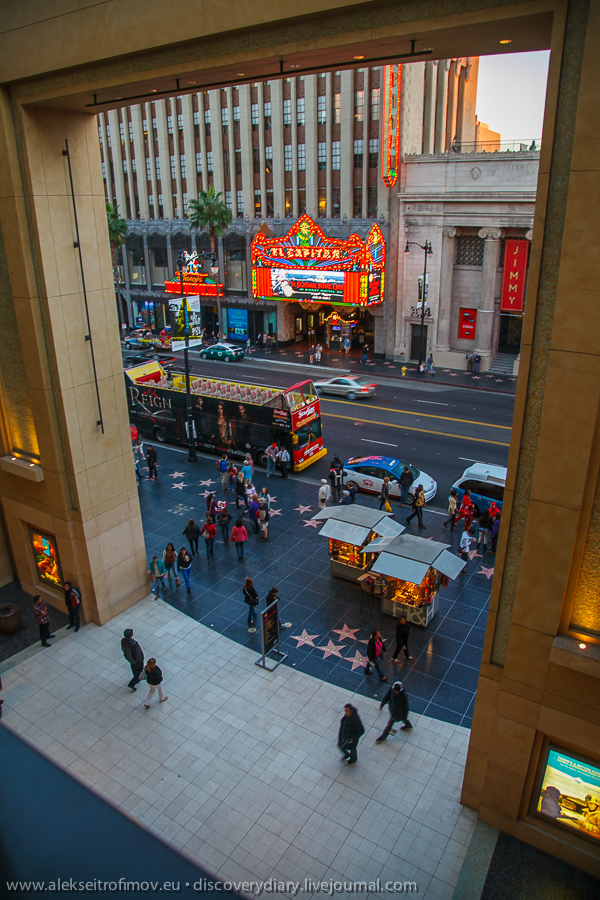 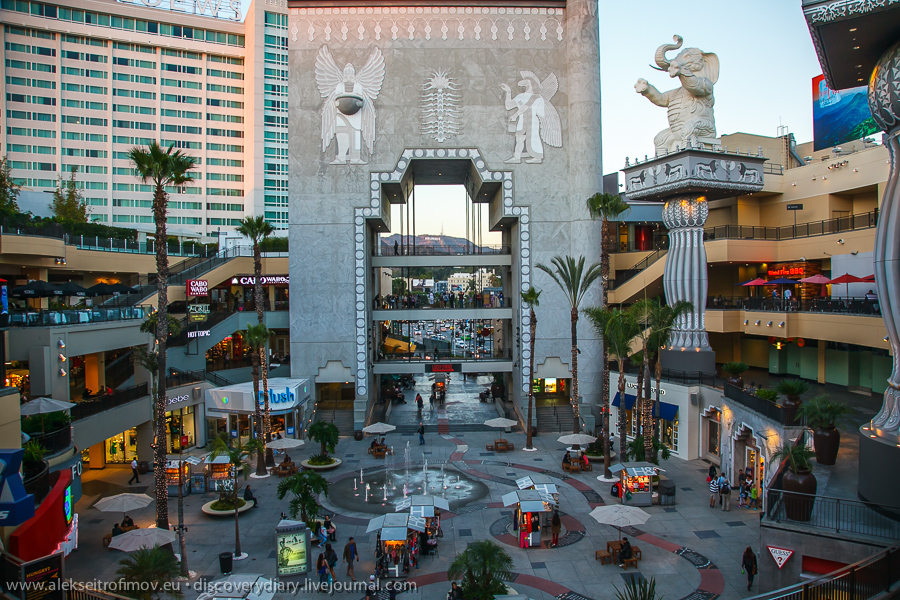 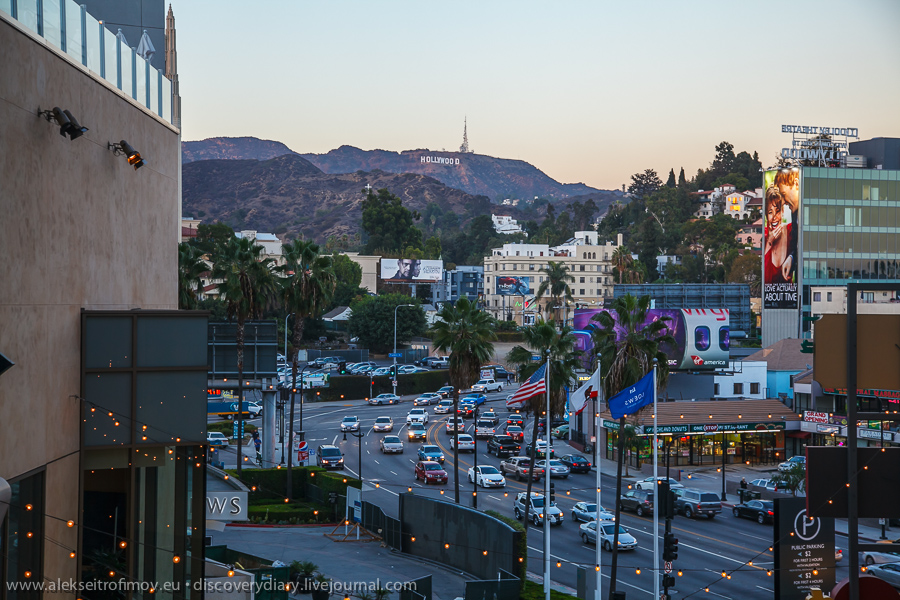 Los Angeles is humongous. From Hollywood the downtown skyscrapers appear as little toys on the horizon: 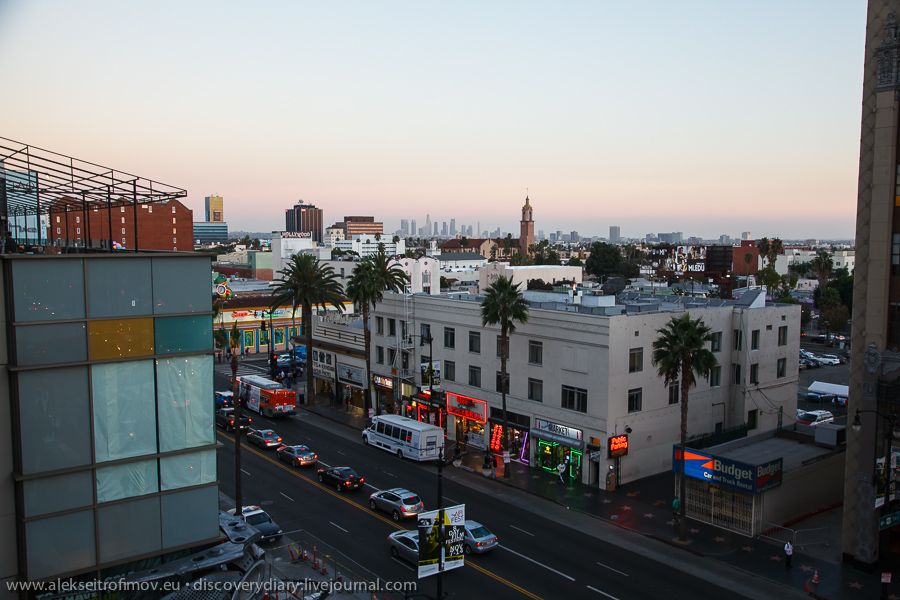 The Chinese Theatre, where all kinds of major premieres take place: 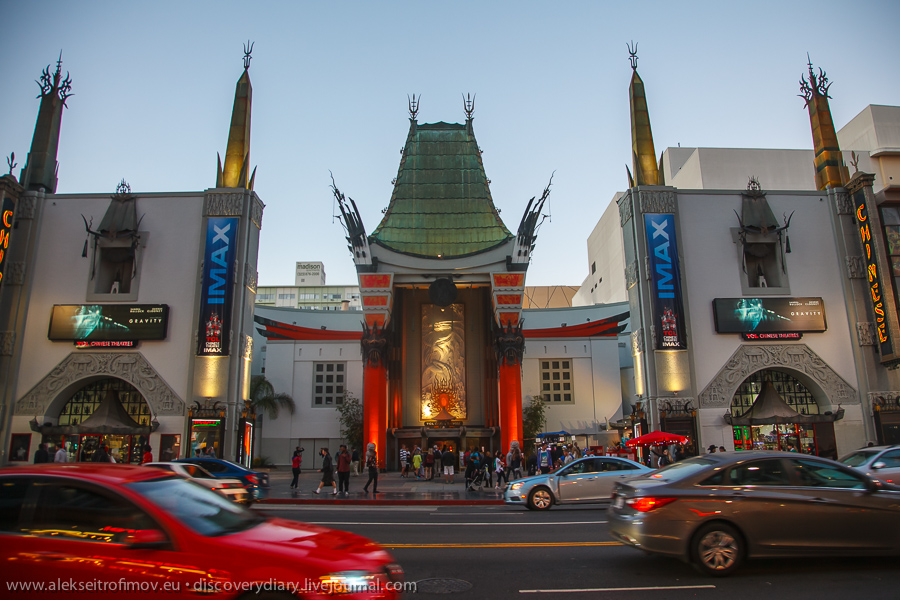 One thought on “In America”