I am in love with Belgrade. It is my favourite city in Europe. I can’t believe I haven’t even been to Belgrade before this summer. And yet as I could not resist its draw, I visited it already four times since. The fatalistic calm and the explosive emotionality, the Eastern European familiarity and the Balcan exotic, the incredible energy and the melancholy. I am not surprised in the least that Lonely Planet would pick it as the number one party capital of the world. This doesn’t matter to me much as I rarely go to clubs – it is rather a symptom, an expression of this special atmosphere of freedom that rules this place. I did go to a club in Belgrade and what a visit it was. I love this place.

I’ve already written about Belgrade the first time I came here but I just feel like devoting another post to it. Bric-a-brac of photos that are full of memories.

The geography of Belgrade starts from the basic circumstance of geography. It sits at the confluence of two rivers: the Sava flows here into the Danube. It is the Danube that is of course the bigger of the two, and yet the Sava is the one which forms Belgrade, dividing it into two and yet uniting the two halves. The famous bridges of Belgrade, starting with the Brankov bridge, cross the Sava. The historical centre is on the East bank of the Sava, whereas the New Belgrade is on the West bank.

Further North West is the famous suburb of Belgrade called Zemun. The border between the Austrian and the Ottoman empires once ran here. In those days Belgrade was the Northernmost Turkish settlement, whereas Zemun was the Southernmost important settlement in the hands of the Austrians. Hence Zemun’s very special character. It feels like a Croatian town, or any other Central European, rather than a Serb.

Here is the view over Zemun from one of its vantage points. The broad river is the Danube and the Belgrade centre can be seen in the distance. The Sava flows into the Danube from the right, it is hidden here by the green mass of the Great War Island. 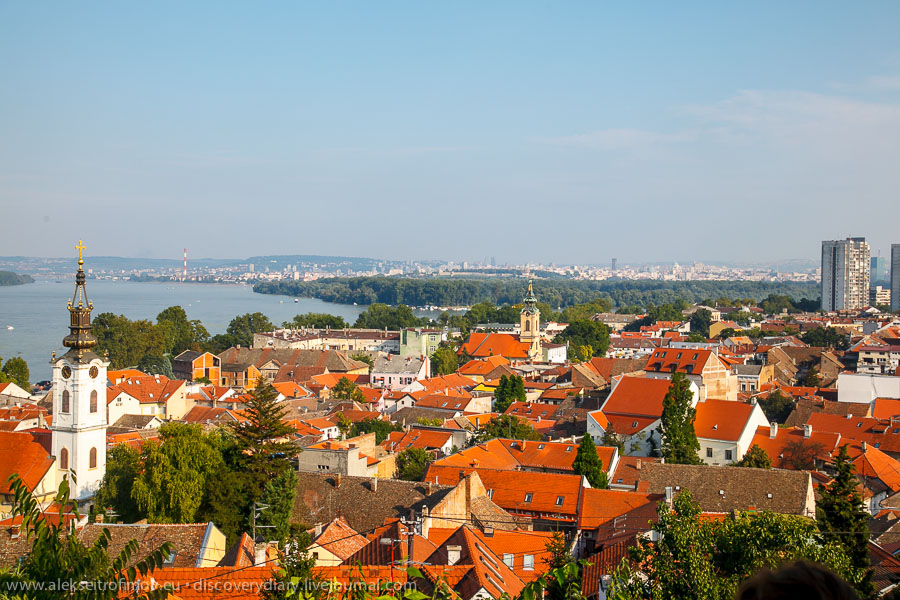 A tower in Zemun, full of very special memories: 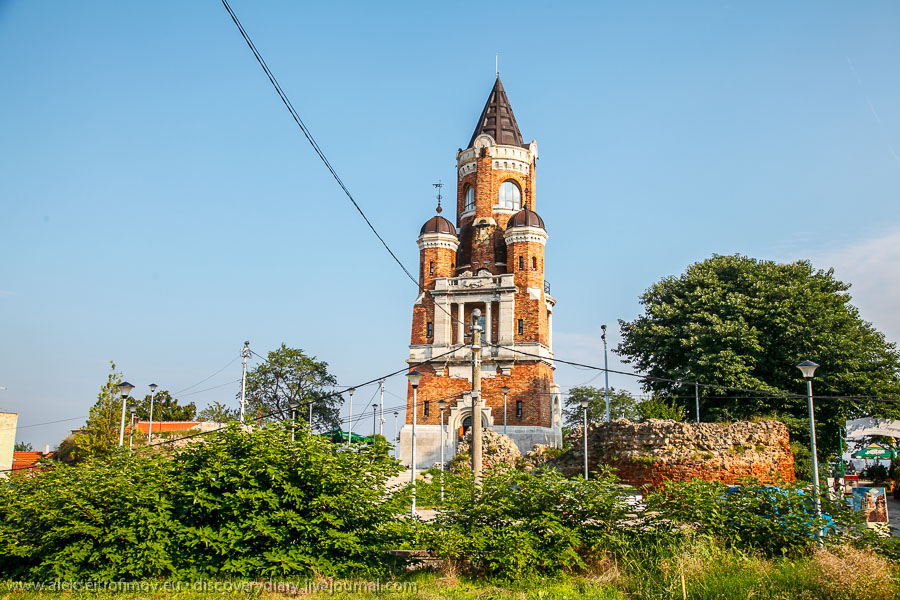 Zemun is some way from the centre of Belgrade. The easiest way to get there is to take a bus (or a car). It is also possible to walk all the way, which is what we did on the way back. A very pleasant walk by the river – first the Danube, then the Sava. As you walk, you would pass innumerable splavs. This is one of them.

A splav is a Belgrade institution. It is a permanently moored barge that is used as a club or a restaurant. All the craziest parties allegedly take place on splavs. 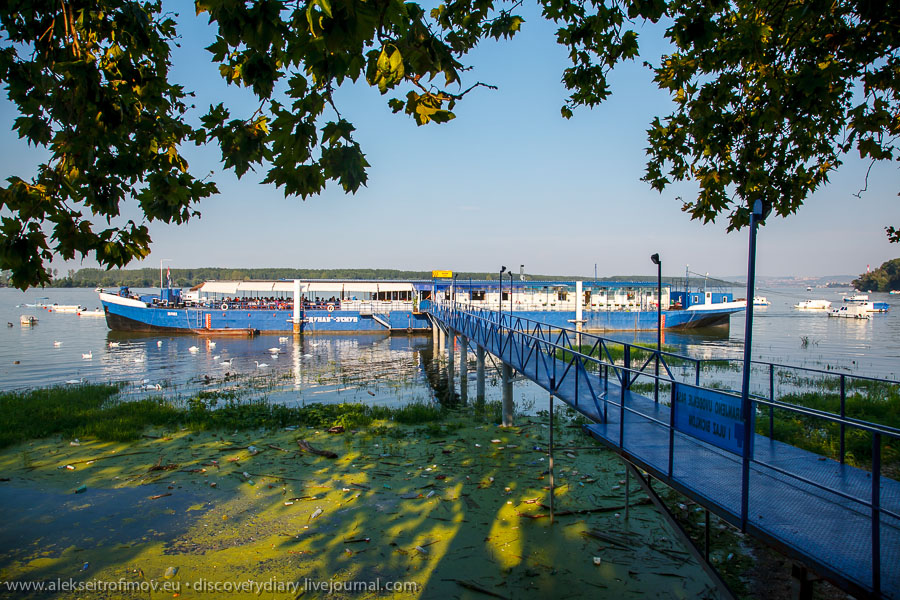 One more landmark you pass as you walk from Zemun to Belgrade is the so-called Serbia Palace. Not open to the visitors and most Serb people have no idea what happens there. In fact it houses governmental institutions. 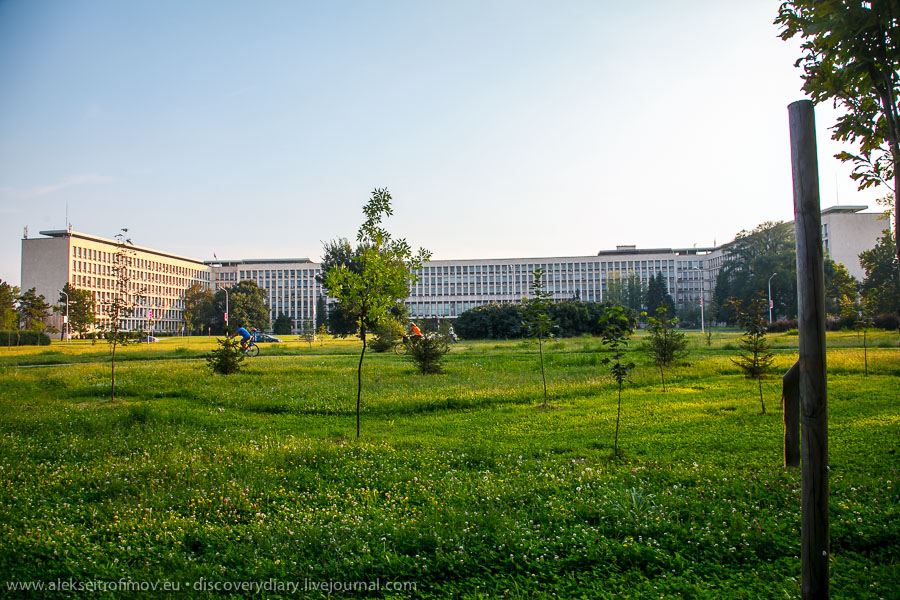 The Museum of Contemporary Art is also closed for visitors. It is undergoing restoration. 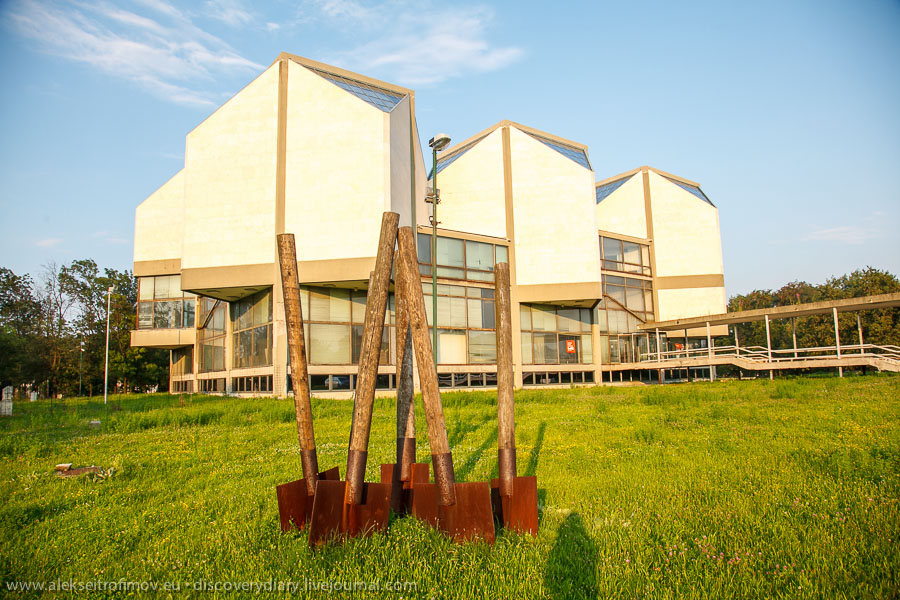 The St Sava cathedral is an enormous building that is being built for many years and is still far from being finished. The main source of the funding are individual donations, hence the delay. It will be the largest Orthodox cathedral in the world. In addition to being the main church of Serbia. 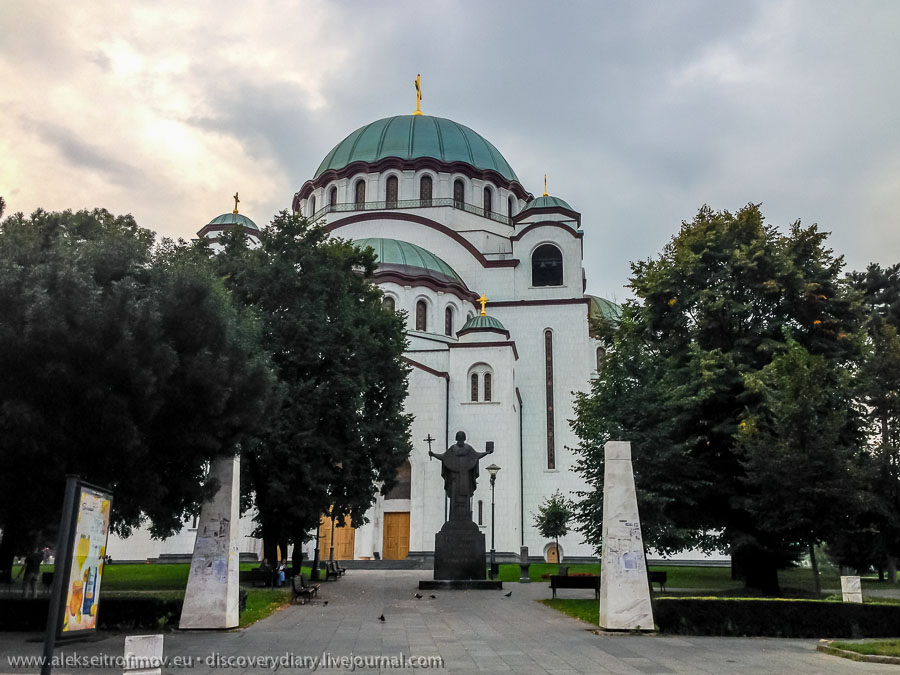 Inside St Sava. Because of its raw state, its forced modesty, its lack of superfluous richness, a strange magical atmosphere suddenly envelops you. And it feels as if you are a witness to a special, mysterious act. 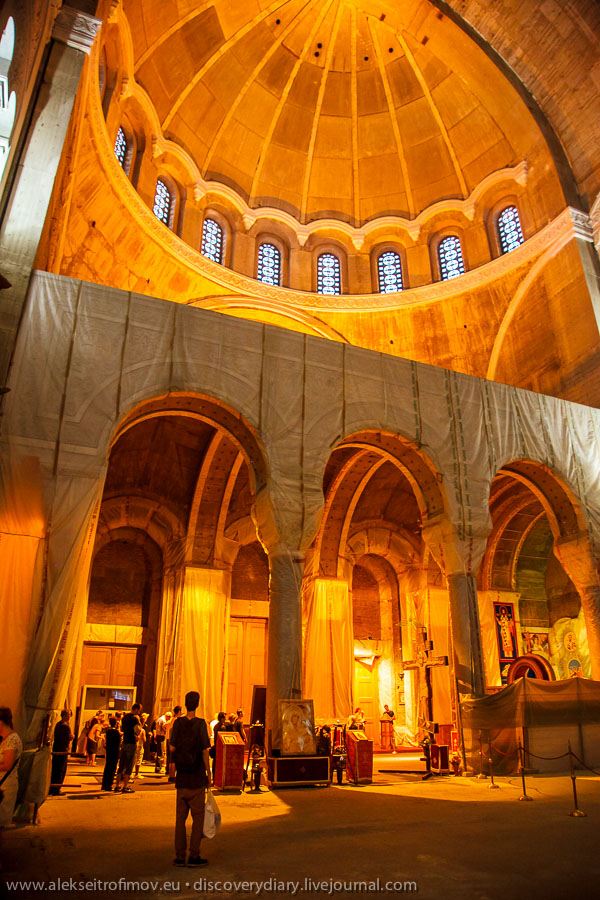 The actual Belgrade cathedral is in the centre – it is this playful cupola, not at all Orthodox in style, that you can see from every point as it dominates the hill. It was built immediately after the freedom from Turks was obtained and so perhaps this is what explains its Western, rather than Serb, character. 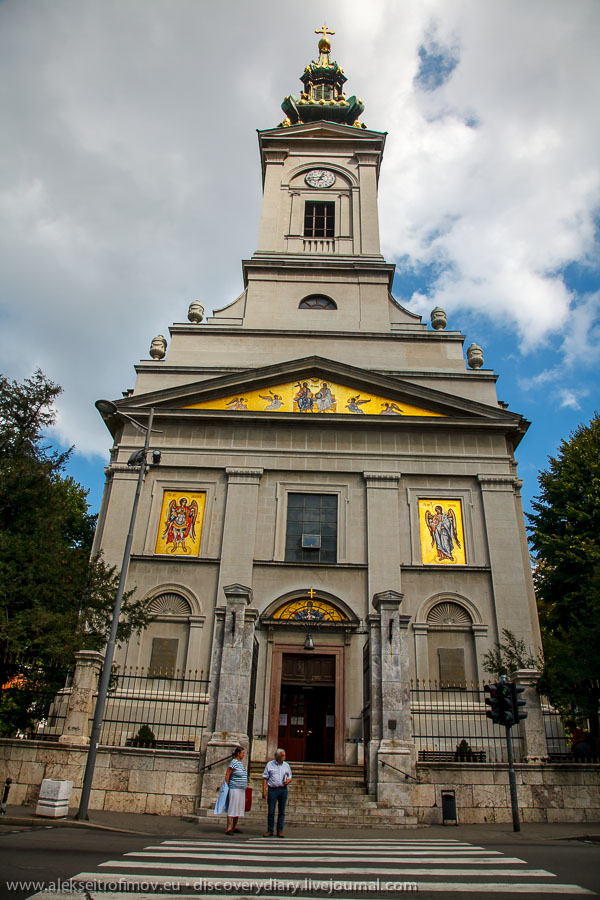 As is wont for all Eastern Europeans (due to their lack of extensive glorious history), the Serbs are very proud of their inventors. Chief among them is Nikola Tesla. No matter he spent most of his life in the United States. Along with Marconi and Popov he is considered the inventor of the radio (each of them would claim they did it first!) His inventions only start with the radio though. In the Tesla Museum in Belgrade there are tours every hour which demonstrate his various ideas. Fascinating! Weird machines suddenly get to work producing all kinds of unexpected effects. You are given lamps to hold that suddenly start shining without being connected by a wire to anything at all. Metallic ships start navigating without an apparent cause. If you’re ever in Belgrade, the tour of this museum tour is an absolute must. No point going there without a tour though. 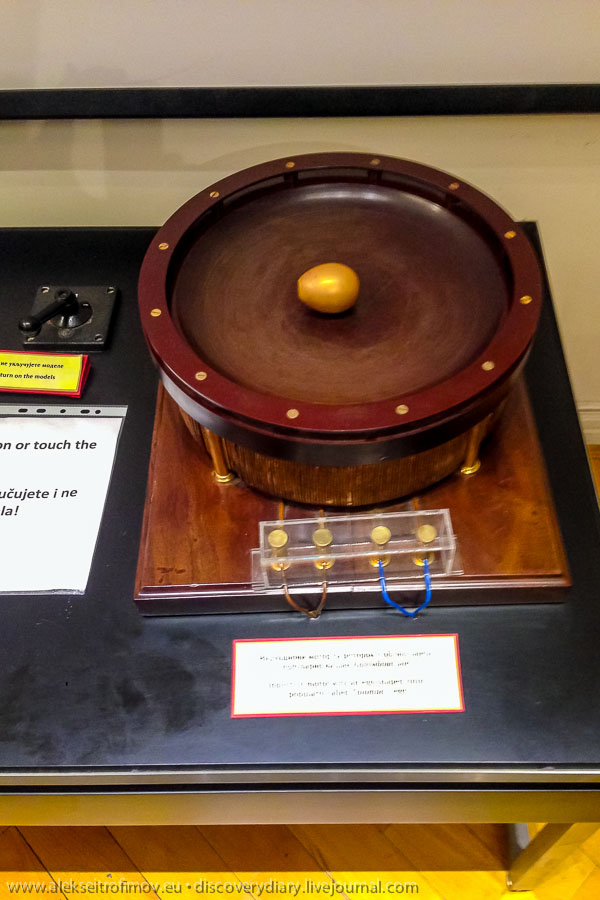 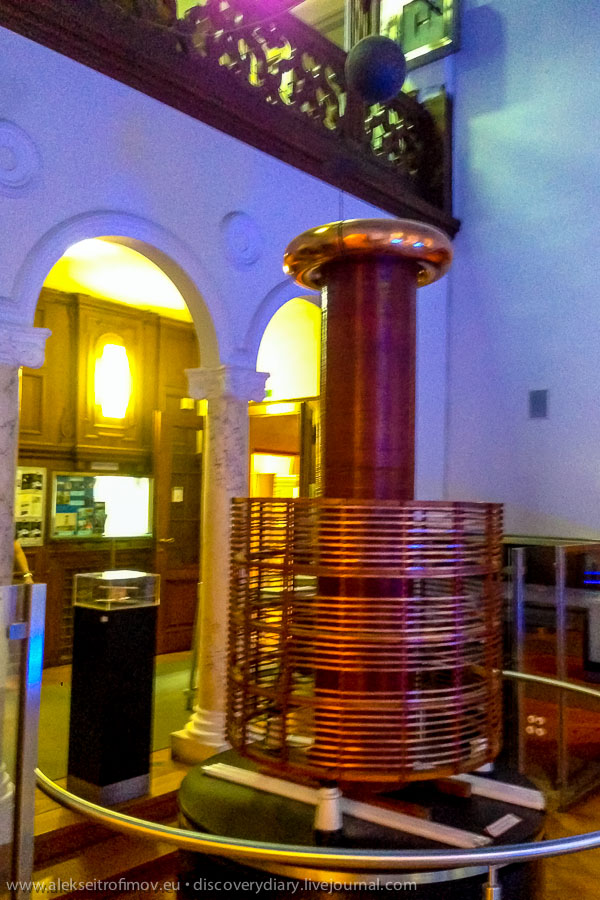 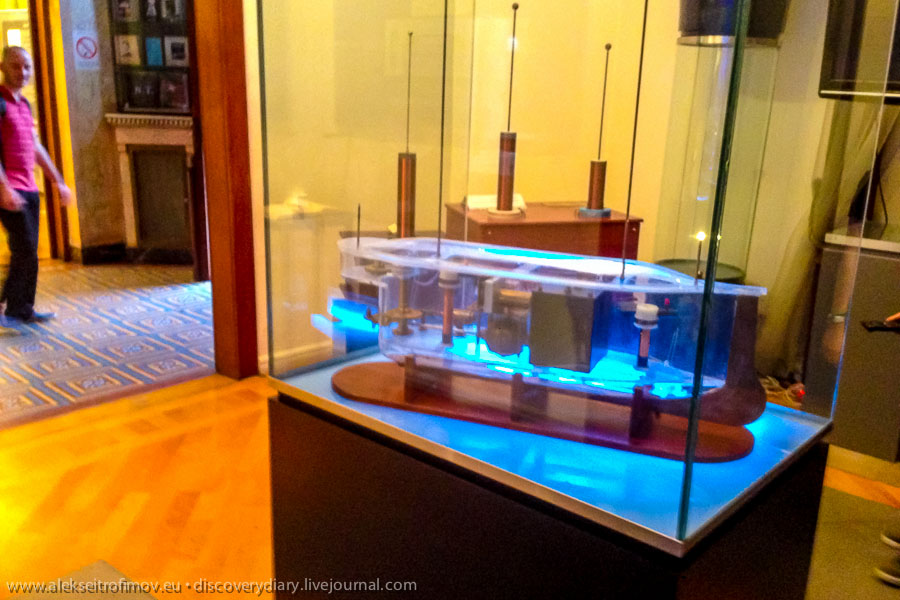 Konak Knegine Ljubice is another tourist landmark. It is the house of the wife of one of the first rulers of independent Serbia in 19th century. At that time nobody knew what would be the destiny of that barely freed from the Turks political entity. Its borders looked nothing like they do today – Belgrade was at the Northern tip, Austro-Hungary controlled half of today’s Serbia. The city was barely taken from the Ottomans and so the first rulers had to decide where the churches, palaces, residences, European-style streets would go. No precedent for such development was at hand. Must have been an interesting time. 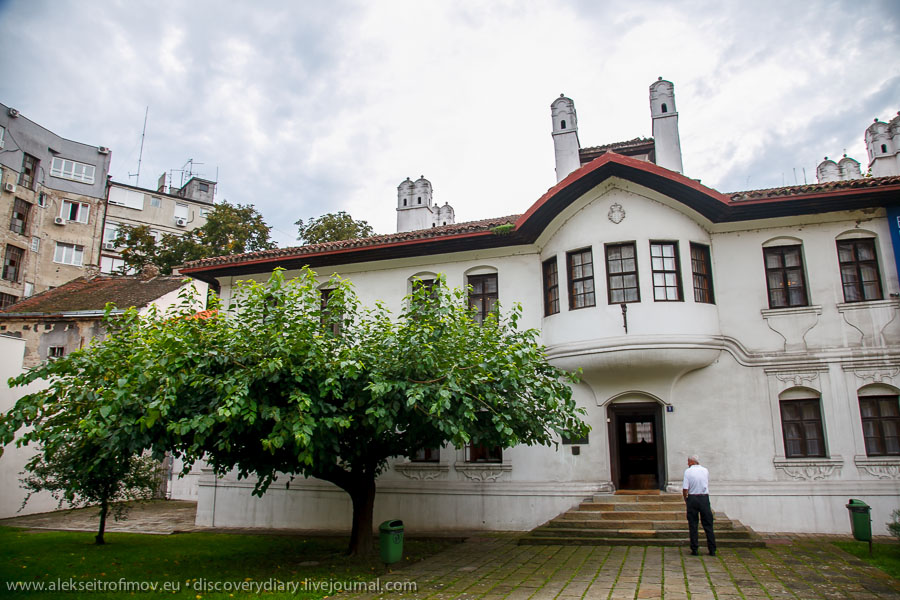 Inside the Princess’ house the exposition reflects precisely that evolution. First you see Ottoman-style rooms, this is where Princess Ljubica actually lived; then you get to the European-style rooms which Serbians started building quite soon – already by the second half of 19th century. 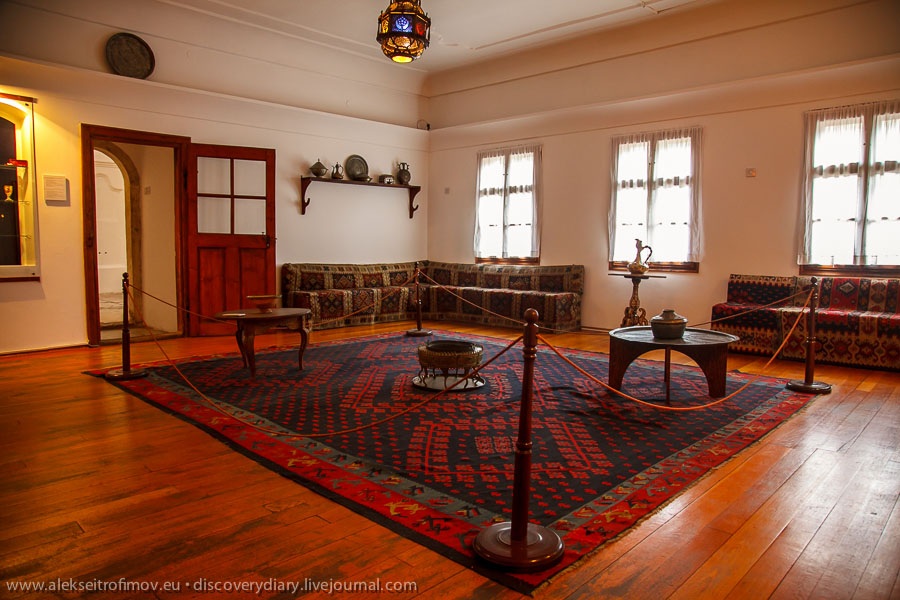 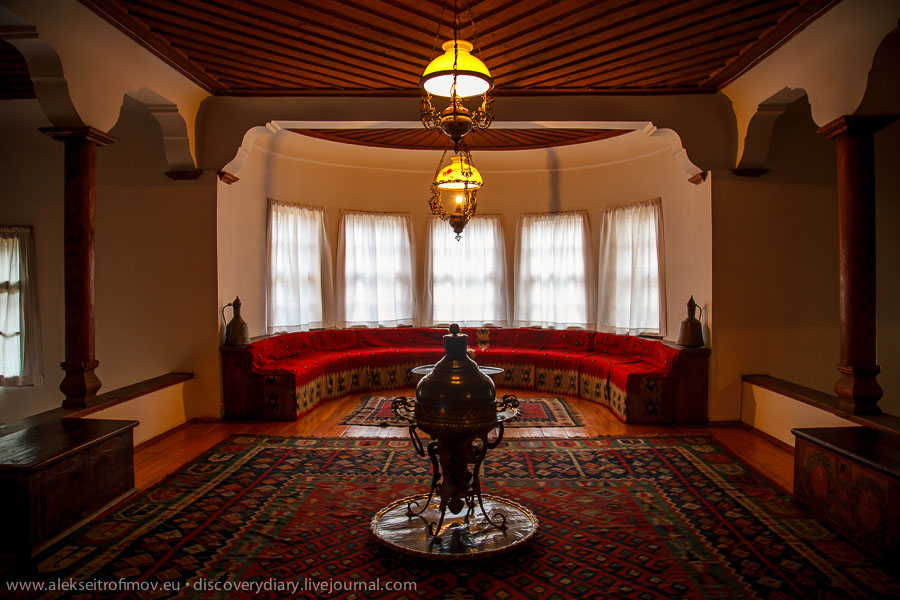 Another weird and fascinating building that you would pass many times a day on the main Knez Mihail street. The Zepter Museum. Not a museum of zepter dishes as may be thought at first, but rather a museum of modern art founded by Mrs Zepter – the wife of the founder of the business empire. In Belgrade you see this brand name everywhere as the Zepters are in fact from Serbia (their real surname is Jankovic). The museum is quite particular. It is large and yet the paintings are hung there with such density that they lose all context and weight. You get the impression of looking at a collage. Mrs Zepter is perhaps so proud of her collection that she thinks no part of it should be left behind. She would be well advised to give her paintings breathing space and to exhibit only the chosen best. 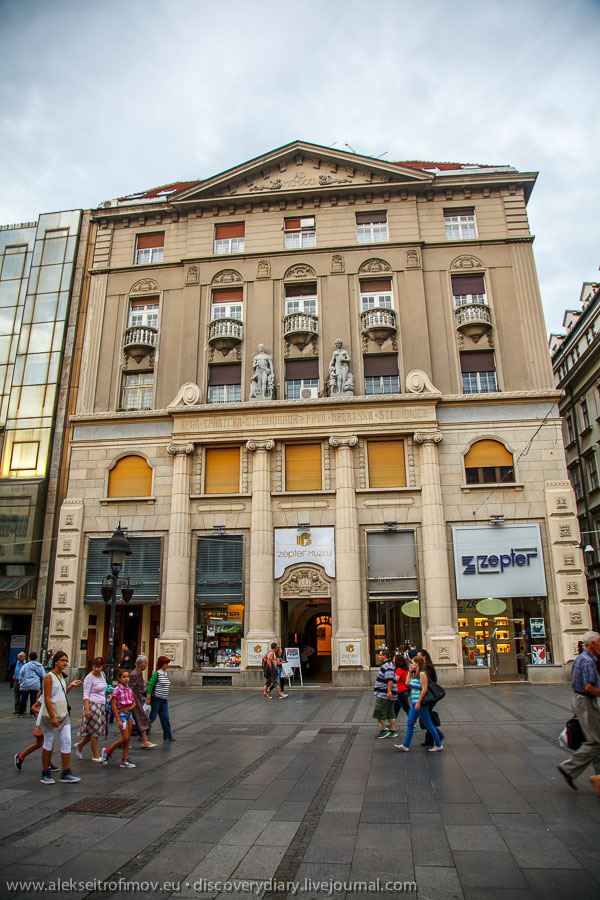 The doors of the Academia gallery. Belgrade is living a special phase in its art development: most of its museums are closed “for restoration”. It is as if the Serb identity was put into the fridge to wait for better times. Times of greater clarity, perhaps. On a whim, together with my art critic friend we entered this gallery. We could immediately feel the yearning for an interested gaze of the lady curator. And so a theatrical presentation of chef d’oeuvres of the gallery we got. Huge cupboards would be brushed open with broad gestures, names of local art celebrities would be thrown with apparent nonchalance, yet others would be rejected with a contemptuous “you won’t be interested in this”. A performance of sorts! 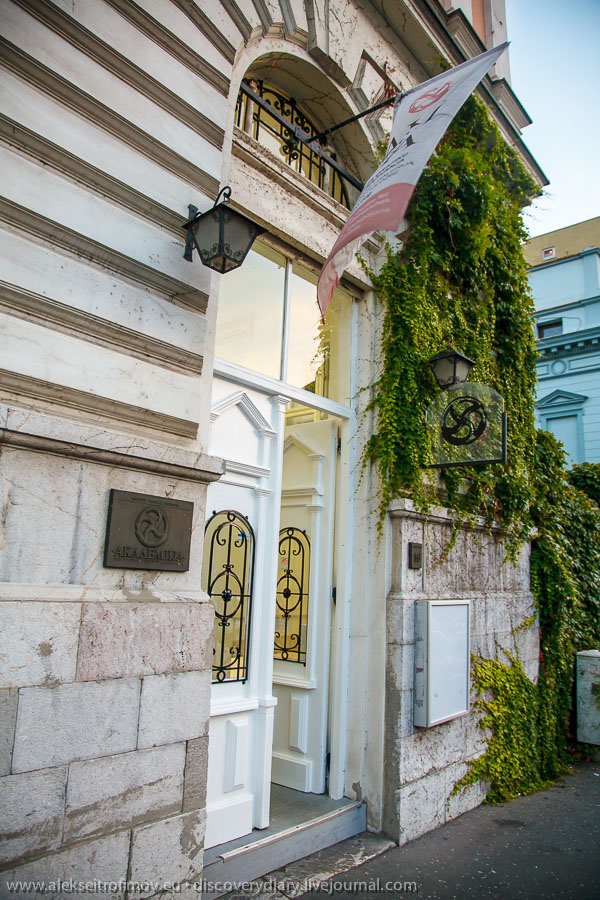 A small church in Kalemegdan – the Belgrade fortress. It is situated on the side of the river, so cannot be seen from the city side. A source of water is located on the premises and is considered magical. The water is put into glasses and bottles and given away for donations. I drank some too. Just in case. 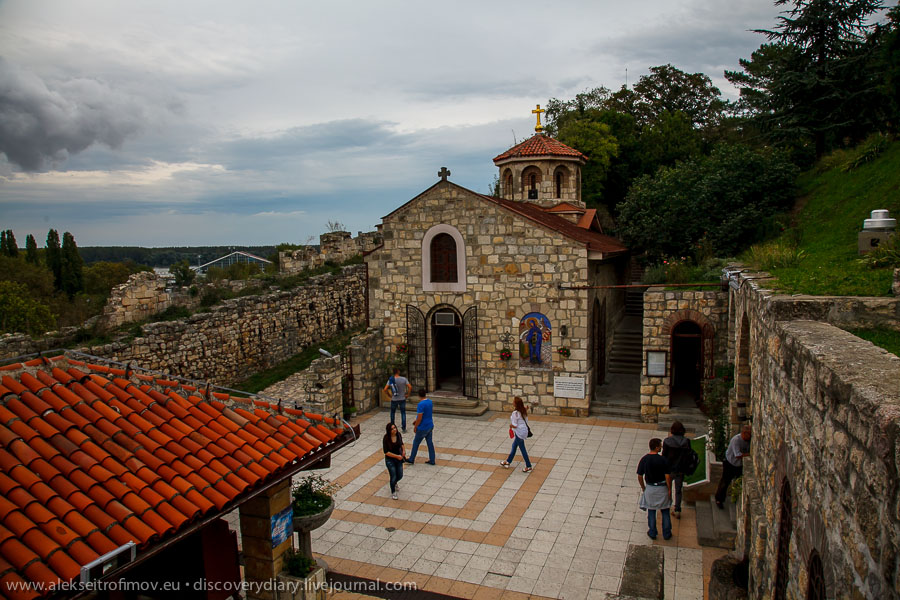 Between the walls of Kalemegdan you come across these impressive-looking exhibits from the War Museum. 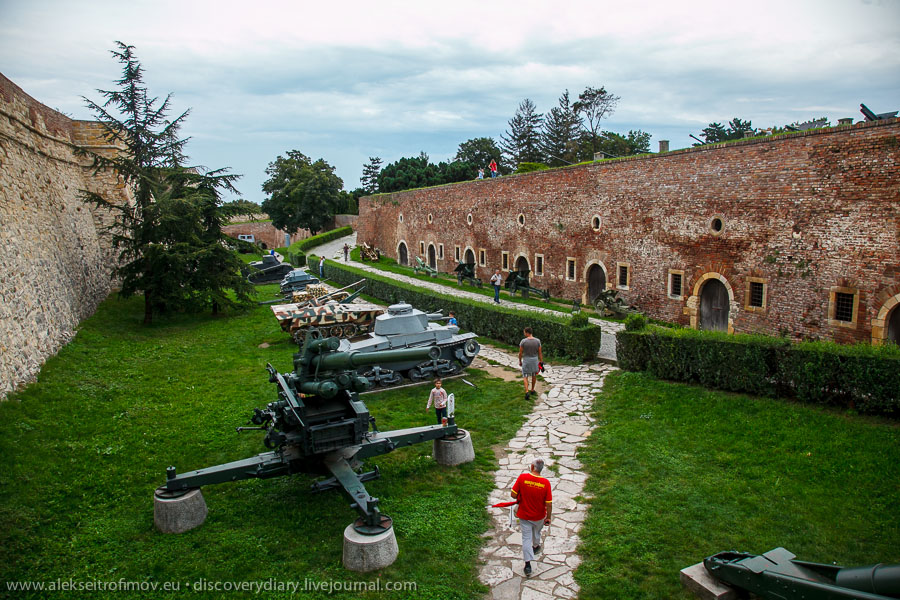 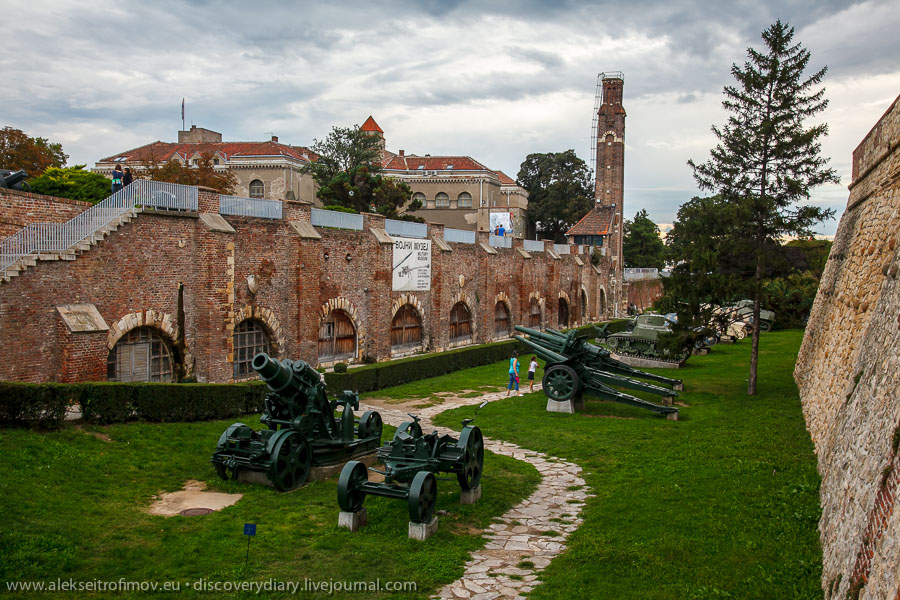 Tennis addict as I am, the tennis courts by the walls were the focus of my attention. I could barely contain my desire to jump in and play. 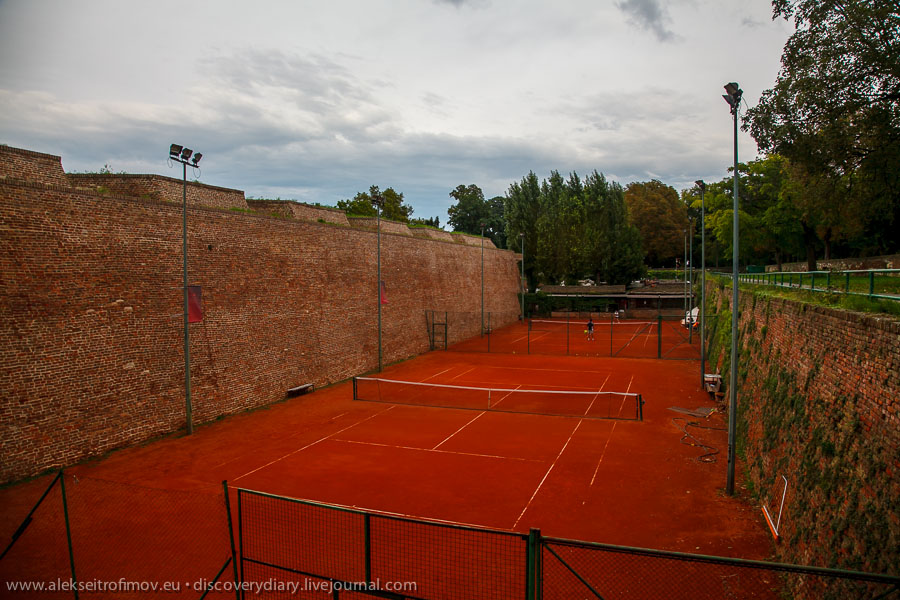 I rented a studio in a large apartment block by the railway station. Charming mailboxes inside. 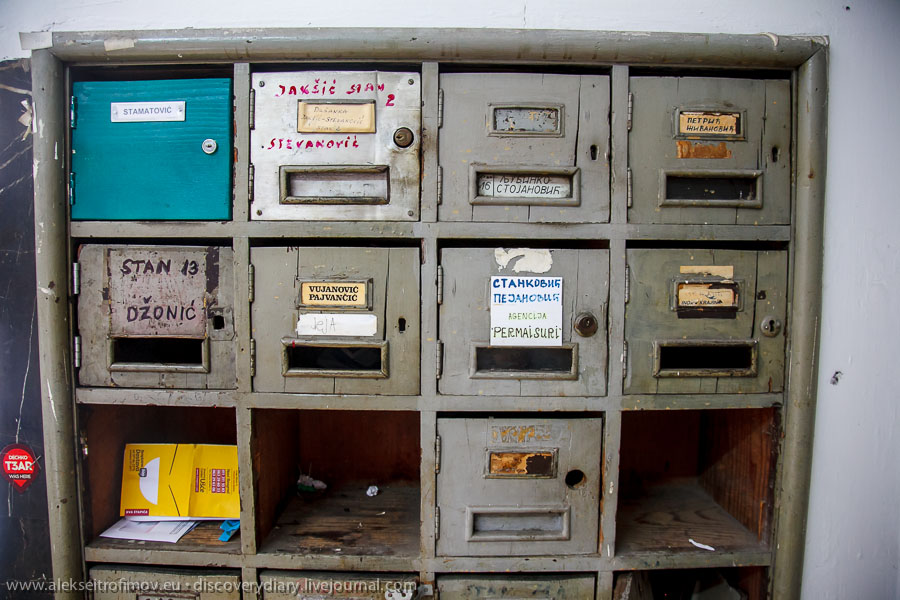 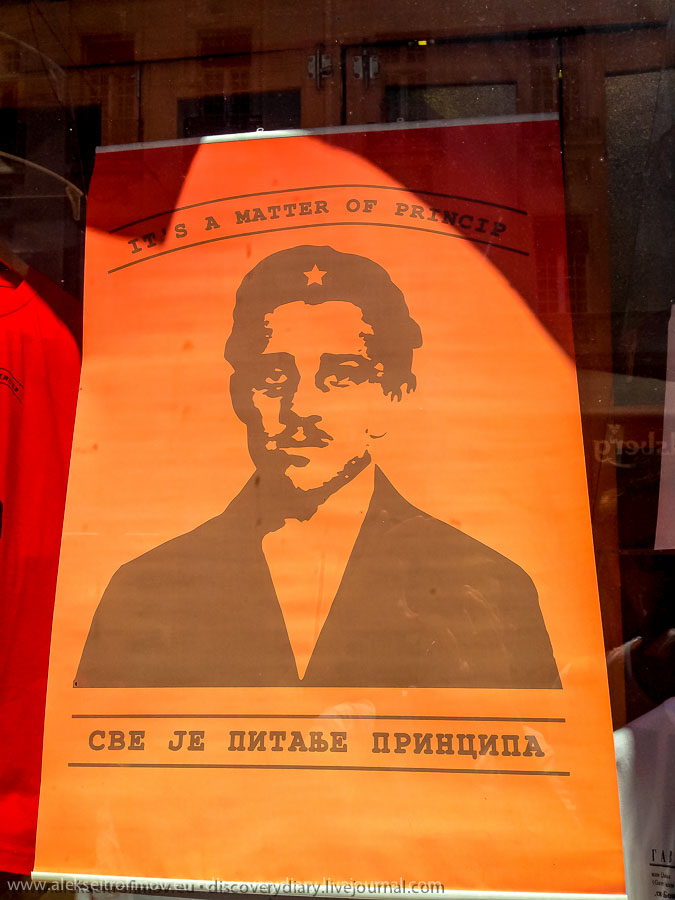 On a random evening I came across this celebration. The graduation of the Military Academy, as I learnt in due time. 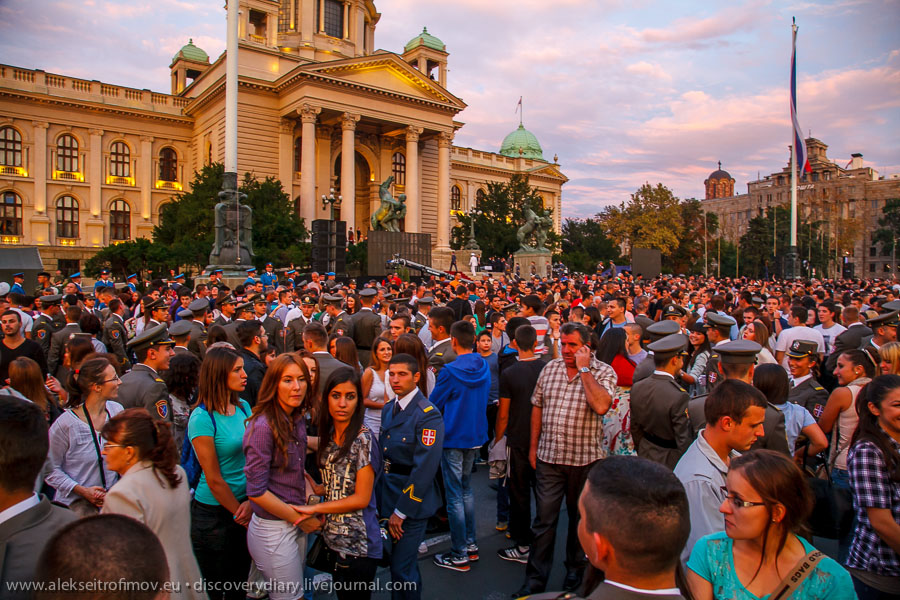 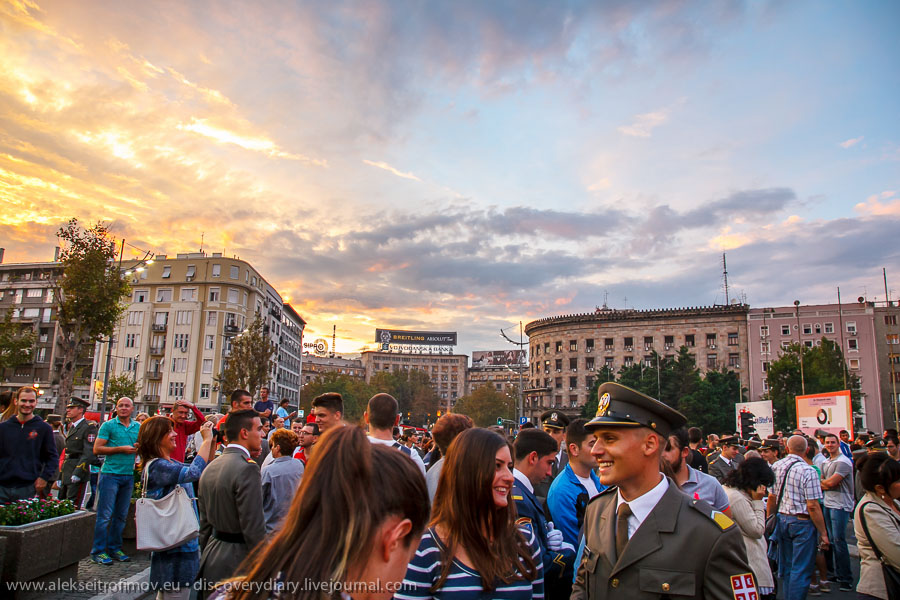 And several other memorable Belgrade spots. A wonderful patisserie in the very beginning of Oblicev venac street. For all of hundred dinar (1€) you get an amazingly tasty mali somun shunka sandwich filled with airy Serb cheese. So tasty it is that I would go back again and again. 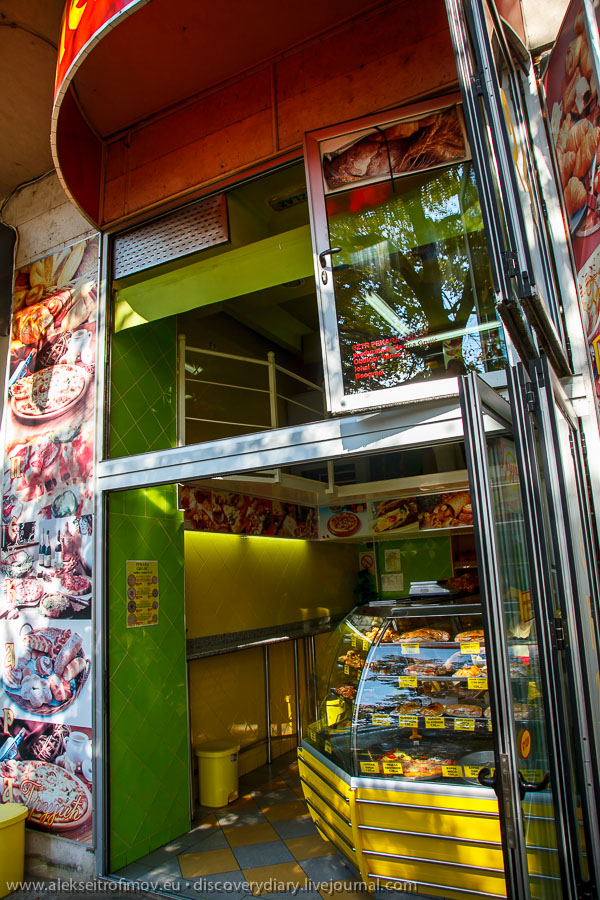 One more Belgrade must – Coffein. There are two of them in the centre and they make the best coffee in town. I guess they have the right machine because the capuccino is just like in Italy. It is accompanied by wonderful macaroons – you get to choose the taste – pistaccio was my favourite. 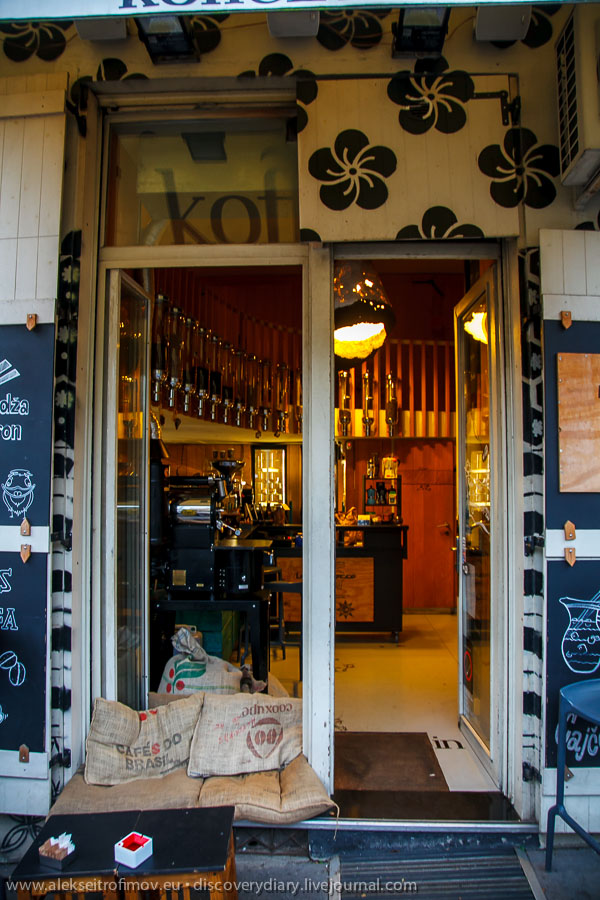 The antique bookshop Dveri = Doors. This is where we found a Mrs Dalloway. 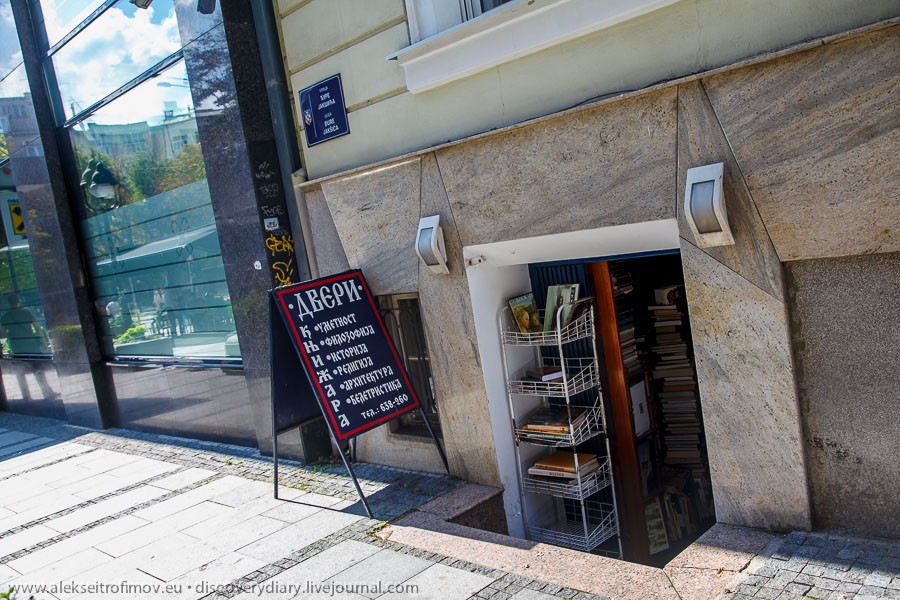 And as the final touch, my workplace in Café Apropo. Belgrade is full of wonderful cafés with super quick wifi where you can sit forever. But some of them have an atmosphere all of their own. 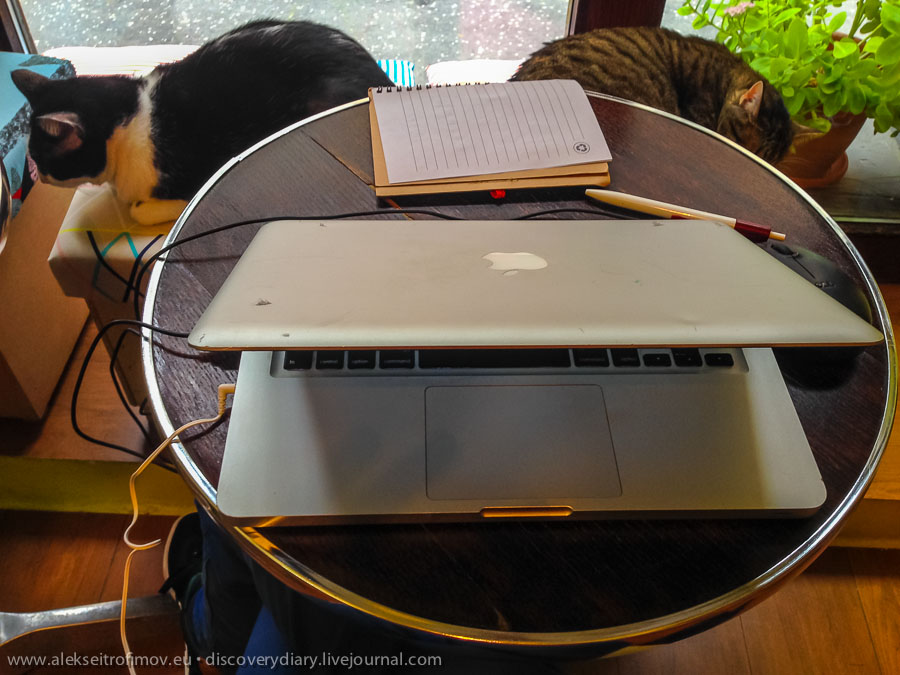